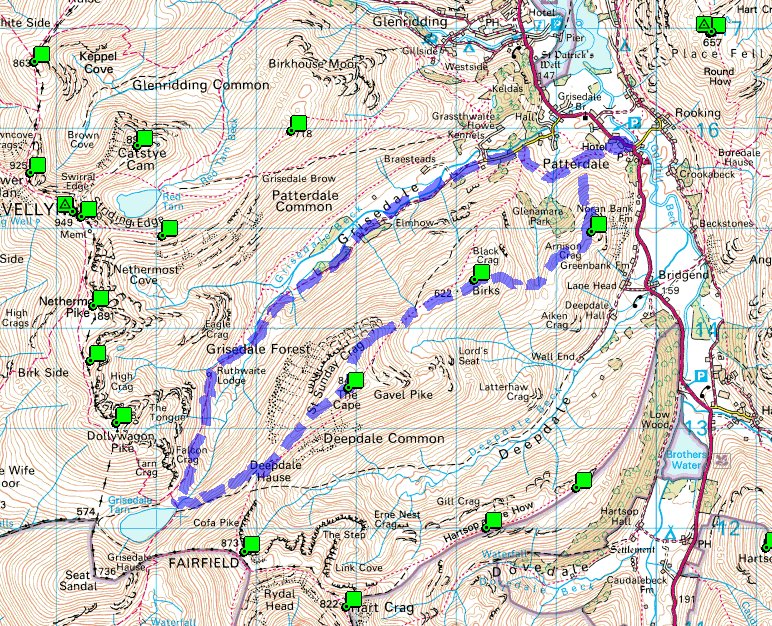 Rob was available this weekend for a walk and despite wanting to do Scafell Pike, I sort of vetoed the idea on the basis of the recent weather and the fact that I own neither ice axe or crampons, both of which I felt would be needed for an ascent of the tallest peak in England. As it was we decided to do St. Sunday Crag instead and we could have made good use of both these items of equipment, as well as snow shoes!

Oxford Crag, the first (but by no means the last) steep climb of the day

More artistic folk have already passed this way (but not today)

As we reached the snow line, Rob marked our names in the snow by the path. He became a little upset that I had a walking nickname and he didn’t. We spent the next 5 hours trying to come up with something suitable, with varying degrees of success. He insisted on the name being something walking related and appropriately rugged and manly. Finally on the way home in the car, after dismissing several hundred options during the day he roared his approval at my suggestion of Tex Gore!! A name to strike fear into the hearts of evil madmen everywhere (or at least those who wander the hills of Lakeland).

Catstye Cam poking its head above the ridge leading to Striding Edge, the wall in the centre contains ‘Hole-in-the-wall’

Hartsop, sheltered in the valley, backed by Hartsop Dodd and Gray Crag

On the ascent of Birks, another steep slope.

The snow was by now well over a foot deep in places, drifting even deeper in parts. There is no path here, even when there’s no snow, so its just a matter of picking your way up the side of the hill.

Wherever we looked there were stunning views. The weather was superb for winter walking. Although it was bitterly cold in the wind, with a wind chill factor of something like -10 degrees, there was no haze to spoil the long shots.

Looking across the snowdrifts towards St. Sunday Crag

An almost Alpine quality to this shot of Rob approaching St. Sunday Crag. Much deeper drifts now, above the knee as we climb higher.

Very windy, with snow being driven across the summit of St. Sunday Crag

Me on a very, very windy and bitterly cold summit of St. Sunday Crag. The water has frozen in the tube of my Platypus

I have four layers on the top and two on the bottom. Fortunately the only cold part of me is my ankles. When you’re walking through deep snow, it gets over the tops of your boots and in the cuffs of your trousers, I’m not complaining though – this is going to be a hard walk to beat in 2008.

Fairfield from the path down St. Sunday Crag

Inverted footprints in the snow on the way down St. Sunday Crag. Snow compressed beneath a boot is revealed as the loose snow around it is blown away

Grisedale Tarn (looking like a
puddle of mercury) with Seat Sandal behind, from the path down St. Sunday Crag

The path up to Fairfield (left), Grisedale Tarn and Seat Sandal (centre) and our path to Patterdale below Dollywaggon Pike (right)

Rob is wearing every layer he has brought with him and he tells me he is just about warm enough. The wind chill is around -10 we guess. It is here we meet the first walker of the day – several hours into our walk – he has just walked up from Deepdale. He is somewhat surprised to see us and we all try to avoid the wide yellow stain he has just left in the pristine snow bank nearby.

Another shot of Hart Crag, taken from Deepdale Hause. Its about to get hairy from here!

The descent from St. Sunday Crag – hairy at times, but great fun

At Deepdale Hause, I had planned to follow the narrow path down to Grisedale Tarn, avoiding the climb up to Fairfield. However, the snow had completely obliterated the path and we spent an uncomfortable 40 minutes slipping and scrambling down to the tarn. The snow had filled the gulleys and without the path to aid us, we both dropped into deep drifts, sometimes up to our waists, where we had to roll down the drift to more stable surfaces. Despite one or two hairy moments, we both agreed it was a lot of fun – but only once we reached the path by the tarn.

We’ve been skittering over hidden rocks, wading across snow filled gulleys and scrambling over frozen rocks and grass for 20 minutes now and we’re still a long way from the tarn.

Despite Rob’s suggestion, we couldn’t cut north down the side of St. Sunday crag towards the valley, as we were separated from the path home by Grisedale Beck and a steep climb on the other side of the beck. We had to push on to the tarn and pick up the path there.

20 minutes later and we’re almost at Grisedale Tarn. The weather, a capricious beast at the best of times in the Lakes, has closed in. We’d got down from the peaks not a moment too soon. Fortunately it changed back within 15 minutes, to clear skies.

We didn’t linger at the tarn. Preferring instead to push on for the warmth of the car at Patterdale. We started to meet lots of other walkers now, from both directions. The path is treacherous and icy, and runs between deep snow, thanks to many many boots. But it’s heaven compared to the scramble we just experienced down the side of St. Sunday Crag.

Ahead, the snow gives way to grass on the fellside

Snow storm on the way back to Patterdale

We ended the walk by spending over 3 hours in Bank Holiday traffic on the M6.

To coin a phrase from Rambling Pete: Walking…. it’s great… Traffic… it sucks!!