I left the Southern Upland Way, at Sanquhar, at the end of Day 6. 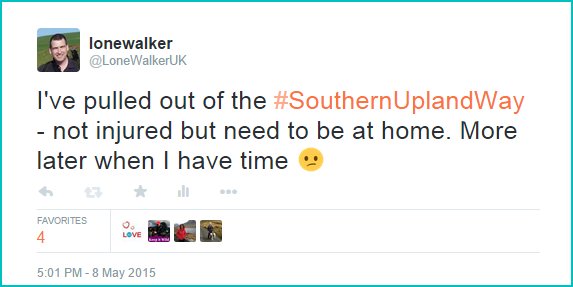 In some ways it was a stalling tactic – I needed to announce my departure because people were following my progress, but I didn’t want to go into too much detail on why. 140 characters doesn’t give you a lot of scope for explanation. The“need to be at home” was double-edged – it suggested a family emergency, but in truth it meant just that – I just needed to be home.

After posting that on my blog, immediately after crashing out of the walk, I had an overwhelming response from people who had been following me on the Way. The comments were incredibly encouraging, many expressing similar thoughts and changes in approach to walking over the years. You can see that post, along with all the comments, here: Southern Upland Way 2015 – Exit