“It really shouldn’t be this difficult!” A phrase I kept repeating while trying to book rail tickets for my Southern Upland Way walk in May. Public transport needs to be much easier to access, or we’re all going to continue taking the default, simple, convenient and probably more comfortable option of driving to the places we want to get to. 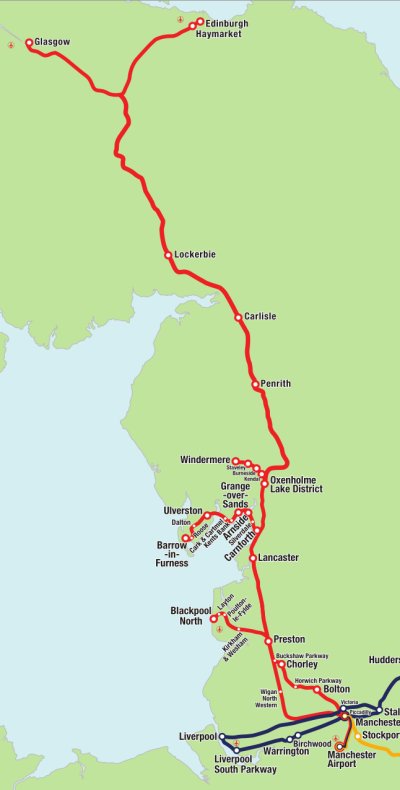 I actually wanted to use public transport for this walk, I wanted it to become part of the journey; I wanted to walk out of my door and feel like my holiday had started. I’d even planned to walk to the station originally, but that plan fell apart almost immediately – starting from a local, non-mainline station increased the complexity by a factor of 10 and the price by a factor of 3. With that goal in mind, even I was close to saying “stuff it, I’ll get a lift”, once the intricacies of planning and purchasing suitable tickets became apparent.

How difficult could it be to buy a ticket from Crewe (my closest mainline) to Stranraer? There’s a mainline connection between Crewe and Glasgow and then a local service from Glasgow to Stranraer. Buy that as one ticket and it costs about £90 or about £50 if you book early enough to secure an Advance ticket. Buy it as two separate journeys and you can save about £40 on that price, especially as I was buying months in advance. Just so happens that the weekend I want to travel is a Bank Holiday and there appears to be engineering works planned, resulting in no trains to Glasgow, all services finishing at Carlisle and no alternatives offered! It took me four weeks to identify that glitch! Virgin Trains customer services didn’t even know about it – they were as confused as me as to why their Advance tickets weren’t being made available. In the end I found a TransPennine Express service from Manchester Piccadilly to Glasgow – managed to secure a First Class Advance ticket for £37 and the onward leg to Stranraer is another £13. Now that’s cheaper than driving, but it took a serious amount of leg work to cobble that together….. “It really shouldn’t be that difficult!” The fact that the train uses the same rails as the Virgin Train is a little worrying, but that’s a future problem perhaps!? (See update below)

The return from Cockburnspath is a bit more complex – that involves a bus which arrives half a mile from Berwick station 15 minutes before the train leaves! A train to Newcastle and another to Manchester. Cost of that journey (exclusing the bus) is £35 and most of that is in a First Class seat too. Again, cheaper than the fuel that would be needed if I was picked up.

At least it’s all booked, despite being a right royal pain in the arse to do it. 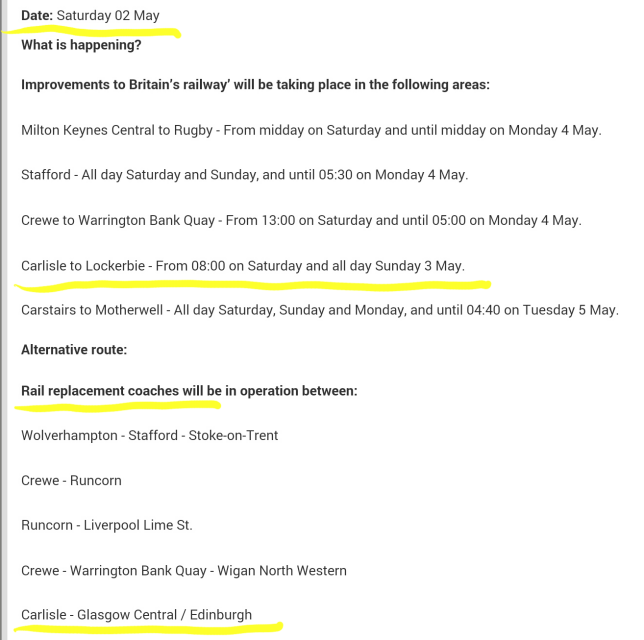 I’m not actually travelling with Virgin Trains, my train to Glasgow is provided by TransPennine, but they use the same lines so I guess they will also be disrupted, they just haven’t owned up to it yet.

My Manchester to Glasgow train now stops at Carlisle and I’m off-loaded onto a bus for the remainder of the journey.

If I’m going to have to sit for hours on a bus, which doesn’t have any concept of ‘First Class’, then I may as well catch the Carlisle to Stranraer bus and have done with it. It also avoids the risk of missing the train from Glasgow to Stranraer, which run infrequently at best.

This all becomes part of the excitement of journey I guess, but feels quite frustrating nonetheless.

The Trans Pennine website still wasn’t confirming any delays for the weekend of the 2nd May, so I sent them a Tweet to their support account and they also couldn’t confirm any delays. In the end I couldn’t stand the uncertainty any longer, and rang their support line.

A very helpful guy in a call centre somewhere in the Asian sub-continent finally managed to confirm that planned engineering works had resulted in the 07:16 Manchester Piccadilly to Glasgow train being cancelled. Nice to know at least, but the start of another round of planning and headaches. He offered various other routes, mostly via York and Edinburgh, but none of them arrived in Glasgow in time to catch the train to Stranraer and all required two changes. He sent me a refund form, so I should be able to get back the fare at least.

He also confirmed that trains are travelling as far as Carlisle, so I’m resigned to the long bus journey from there to Stranraer. I started to look at how I can book this and where it goes from. It turns out that bus service information is even worse than train information! Hard to believe I know! It appears two services run from Carlisle to Stranraer – there’s a National Express coach that leaves at 3am, just the one journey per day, so scratch that one! The other option is a Stagecoach bus, this one also runs once a day, but in the middle of the afternoon, a bit more sociable than the red-eye. Next question, was where do I catch it from. A consideration I needed to understand as I would be coming in by train and had no idea how far I would have to walk. The Stagecoach website is utter shite, not only does it have conflicting timetables for the same route, it also provides conflicting information on where the bus starts from. The published timetable for the route says it starts at Carlisle bus station at 14:52, from Stand 8 – so I looked at Google Street View and saw that there’s only seven stands in the bus station. The journey planner on the same website says the bus starts departs from the Apple Tree pub at 14:40. The bus station and the Apple Tree are about 200 yards apart and not visible from each other. Absolutely brilliant, is it really any surprise we all drive everywhere? 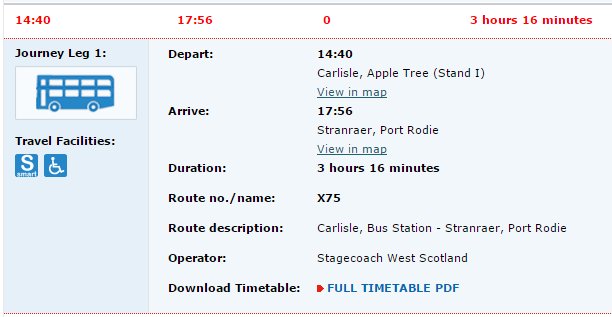 “It really shouldn’t be this difficult!”

The only upside to all this means I can leave home a little later now though as the only bus from Carlisle to Stranraer doesn’t leave until 14:40…… or possibly 14:52

I know, I know, this post is already too long and you don’t want to hear even more tales of woe. But, I need people to understand how frustrating this whole process has been. The public transport part of the holiday has taken more planning time and effort and frustration and worry than the whole of the rest of the holiday put together! 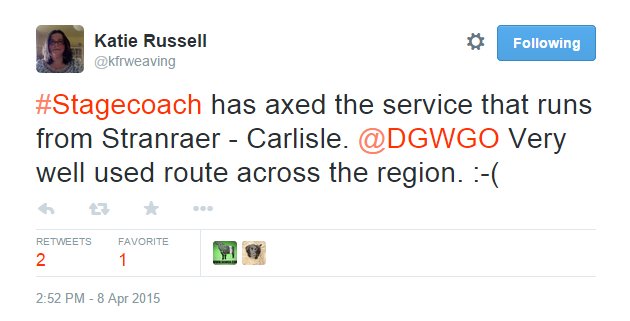 I spotted this tweet a couple of days ago, from Katie Russell and realised she was talking about the bus route I have planned to take from Carlisle to Stranraer. Katie helpfully passed me all the information she had and I followed that up with an email to Stagecoach. They confirmed that they had axed the X75 service and replaced it with two services. I now have to catch the 79/179 Service from Carlisle to Dumfries where I have a 40 minute wait before I catch the 500A Service to Stranraer. The changes are apparently down to cost savings and as Katie says, this is on a well used, cross country route!

I now have another 76 minutes on my journey, much of which will be spent waiting in Dumfries bus station, which I’m sure will be wonderful.

However, this now opens up another option. I had settled on the bus from Carlisle as it was direct to Stranraer. It seemed easier than getting the train from Carlisle to Dumries and the bus from there onwards. It was one less change, one less connection that could get fouled up, and so on. But the train is now back in the mix. I’d rather spend 35 minutes on the train than 90 minutes in a bus. I can spend the time difference in Carlisle, with my feet up at lunch time.

The saga continues – if I make it to Stranraer at all it will be a bloody miracle!

8 thoughts on “Getting There & Back”