I’d walked about a mile or so out of Beattock, heading for the Ettrick Hills and as I reached an old cattle feeder standing rusting beside the track, I knew I wouldn’t finish the Southern Upland Way. I paused for a few minutes and wrestled with my conscience; I didn’t want to stop, but I also knew that my foot wouldn’t take me to the end and if I was going to stop this would be the best place to do it. It was the weekend, I could walk back down into Moffat, right beside the A74 and find a cosy tea shop to sit and wait out the three hours or so it would take for my son to pick me up.

I knew I had to go back and finish it though, right from the moment I stopped beside that cattle feeder. I thought I may even be able to go back later in the year and take off where I finished. It would only take 5 or 6 days if I pushed it. But circumstances caught up with me, a couple of weeks later I was made redundant; the remaining weeks of the summer were spent looking for a new job and when I found one there was the reluctance to take time off before I established myself.

The following year I made the decision to concentrate on weekend adventures instead of a long distance walk but even that plan went tits up when my knee exploded on a walk up to Fountains Fell. The rest of the year was spent with my feet up, waiting for an operation. That brought home the stark realisation that I wasn’t getting any younger and with bits of my body failing left, right and centre, my long distance walking days may be drawing to a close, so I better get a wriggle on a do the ones I wanted while I still could!

The result is that 2015 sees my return to the Southern Upland Way and being a bit of a traditionalist I thought I’d better start from the beginning again. I also decided, quite early on, that there were things I wanted to change this time round; lessons learned and all that.

Views to die for on Craig Airie Fell

I’ve already discussed the idea of using public transport to get to and from the walk and provided I can get advance tickets cheap enough then that is still the plan. I’m currently waiting for the advance tickets to come on sale for the outward journey on 2nd May. They aren’t released until about 12 weeks ahead of time and thetrainline.com lets you set up an email alert to warn you when they become available.

It looks like I should be able to get a standard fare for about £24, but I may upgrade the Crewe to Glasgow leg to First Class for an additional £25 – probably worth it for the 3 hour journey. Let’s face it, the worst thing about public transport is the public!

Crewe to Stranraer appears to be a one change journey, via Glasgow, but the journey home from Cockburnspath is a little more complex. I have to catch a bus to Berwick first of all, then it’s a train to York, another to Manchester and a final one into Crewe. There are other options via Newcastle, but that’s still 2 changes I think. Buying advance tickets means I have to plan the journey carefully. Too little time between trains at a change and I could miss my connection. As advance tickets are bought for a specific journey on a specific train that would result in buying a replacement ticket at full price. Leaving ample time between changes adds to the travel time of course and I will have walked 19 miles before the bus and train journeys begin, so getting home quickly is important. It’s a fine line to tread, making this journey tricky.

Trig point on Hill of Ochiltree

I’m changing some of the accommodation I used last time. I didn’t like a couple of places and although I tend to be an advocate of ‘better the devil you know’ I wasn’t prepared to put up with them again if I had a choice. I’d rather spend a few extra quid and find somewhere else.

The B&B in New Luce was OK, but I remember feeling cold all evening and absolutely freezing in the morning while eating breakfast, so this time I’ve picked the Kenmuir Arms Hotel in the village, which should also reduce the distance I have to walk to dinner.

In Dalry I’m using the Lochinvar Hotel, instead of the Clachan Inn; not because the latter was bad, it wasn’t, it was OK, but the Lochinvar offers a pick-up service that allows me to break two 25+ mile days into three more manageable sections. I wouldn’t normally use this type of service on a long distance path, but it means I can avoid another less than brilliant B&B that I used in Nether Holm.

I stayed on a working farm in Sanquhar and again, although it was OK, it wasn’t great, so I’ve spent a few extra quid to stay in the Nithsdale Hotel in town; another short walk to dinner.

There seems to be only one B&B in Wanlockhead and I remember dithering all evening under a blanket trying to get warm in that place, plus I had a dreadful experience in the Wanlockhead Inn, so I won’t soon be returning there. Both these factors have led me to abandon Wanlockhead as a stop on this year’s walk and I’ll be heading to Leadhills instead. They have a hotel there – the highest in Scotland (which I can add to the night I spent in the highest Inn in England at Tan Hill) and the route changes I need to make to get there mean I can visit some different hills.

The other changes revolve around the route selection, which I’m modifying either because I’m using different accommodation, or because I want to pick a slightly different path.

Last time, leaving Bargrennan, I was delayed by about two hours, so I took a short-cut, which will be rectified this time. The longer route also means I can search for the third Kist. (A Kist is a cache of Waymerks – or coins – specially minted for the SUW, forming a 200 mile treasure hunt).

The biggest change to the route is when I leave Leadhills. Rather than return to the traditional route over Lowther Hill and Comb Head, I’m going to use Green Lowther (which has a trig point) and Horsegrain Dod, returning to the road via Potrenick Burn, hopefully avoiding the horrible boggy bit I found at Overfingland last time. 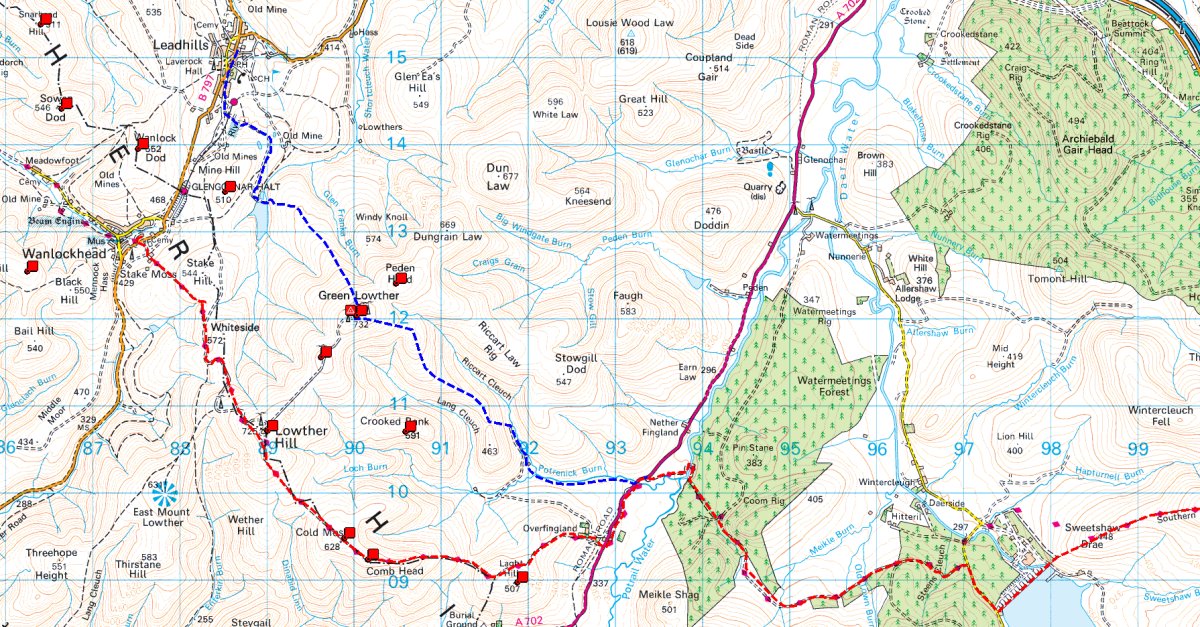 New route, from Leadhills is shown in blue, traditional route in red

Potrenick Burn and the misty hill to come

I have some kit changes I would like to make before I set out, but I think that probably deserves a post of its own in the future, so watch this space.