The weather guessers had predicted some reasonable weather in Scotland and as the wife was working all weekend I took the opportunity to scoot up north and bag a couple of Munros. I didn’t book anywhere, I had the car and it was getting towards the end of the season, so even if I didn’t manage to find any accommodation, which I thought was unlikely, I could always sleep in the car. This is the second day walk of the two.

Today I came the closest I have ever come to being seriously injured, or possibly even killed on the hills. It was a nerve racking, sphincter loosening, heart pounding 5 or 10 seconds that seemed to last for an age. It happened just like these things do in the movies, in slow-motion. I felt no panic at all as it was happening, but it took me about 5 minutes to stop shaking after I recovered my position on the narrow path right at the top of Coire na Tulaich. But more of that in a minute.

I had a minimalist breakfast and Kareen seemed rather guilty that she’d not sent me off with a better meal inside me, so she insisted on providing a large Tupperware bowl of fruit salad and a choice of chocolate bars from a huge box she’d been left by a previous guest – I took a Double Decker!

I left the B&B at 07:50 and drove through a wonderfully quiet Glen Coe, arriving at the car park, just off the main road at 08:00. As I was putting boots on I chatted to a couple of Scots guys leaving their car and heading up the hill. They were doing the two Munros; Stob Dearg, on the front face of the mountain and Stob na Broige at the back end. I followed them about 10 minutes later.

The path leads from the car park around the back of the private climbing bothy at Lagangarbh and straight into Coire na Tulaich; the large bowl in the heart of the mountain. The path is generally easy to follow when you’re on it, but once you get into the Coire properly, there are one or two places where it breaks up and you have to be careful to pick it up again. It was useful to have the two guys ahead of me, it made spotting the right path a bit easier. When they were out of view the occasional wet boot print on rocks showed I was on the right track.

Buachaille Etive Mor from the path at the car park. Coire na Tulaich is the bowl leading to the main ridge of the mountain. 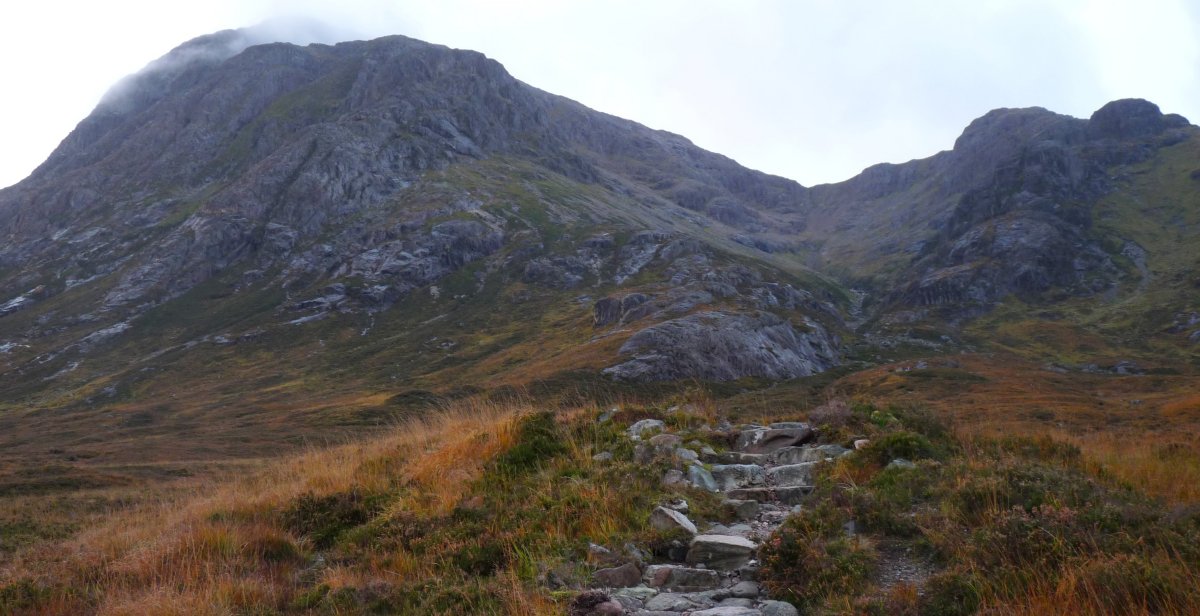 Just about to enter Coire na Tulaich, the path is well graded and easy to follow for most of the way 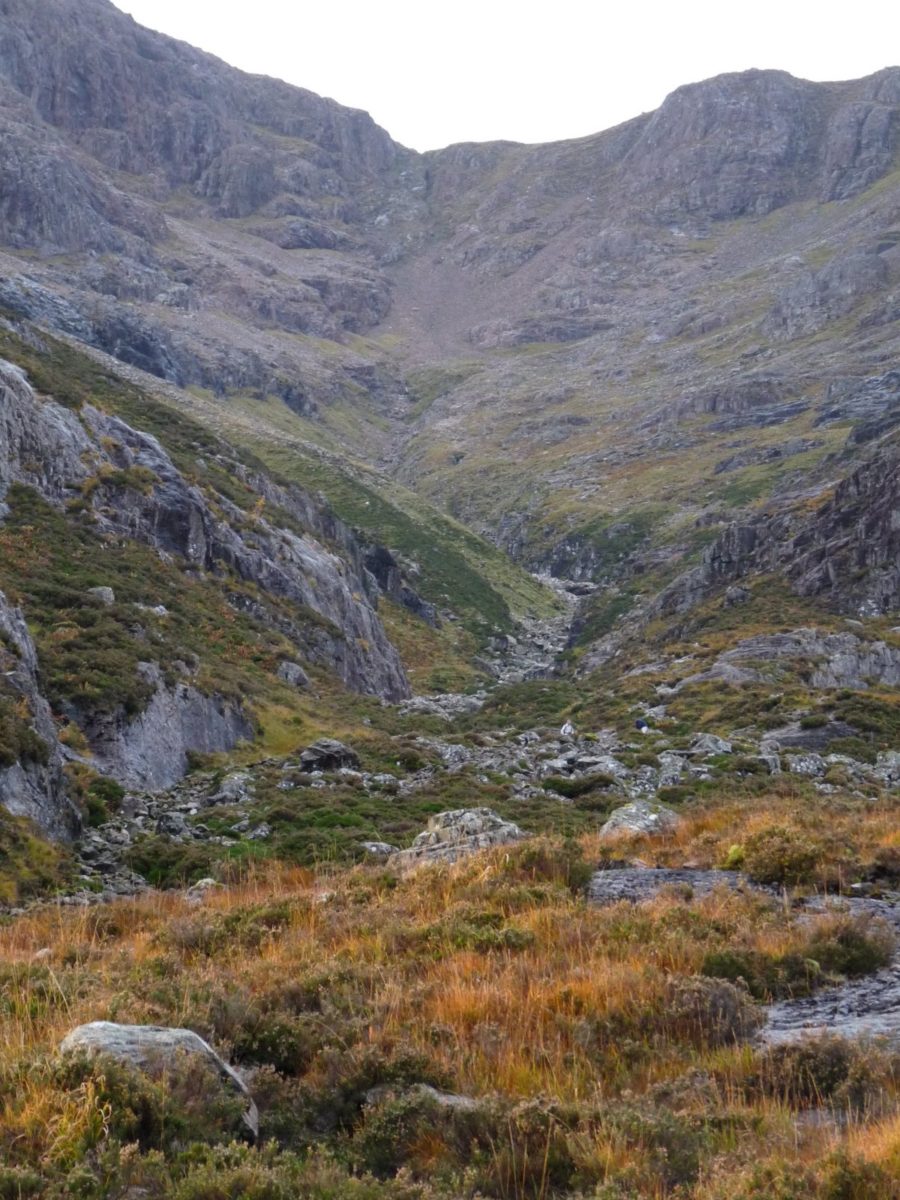 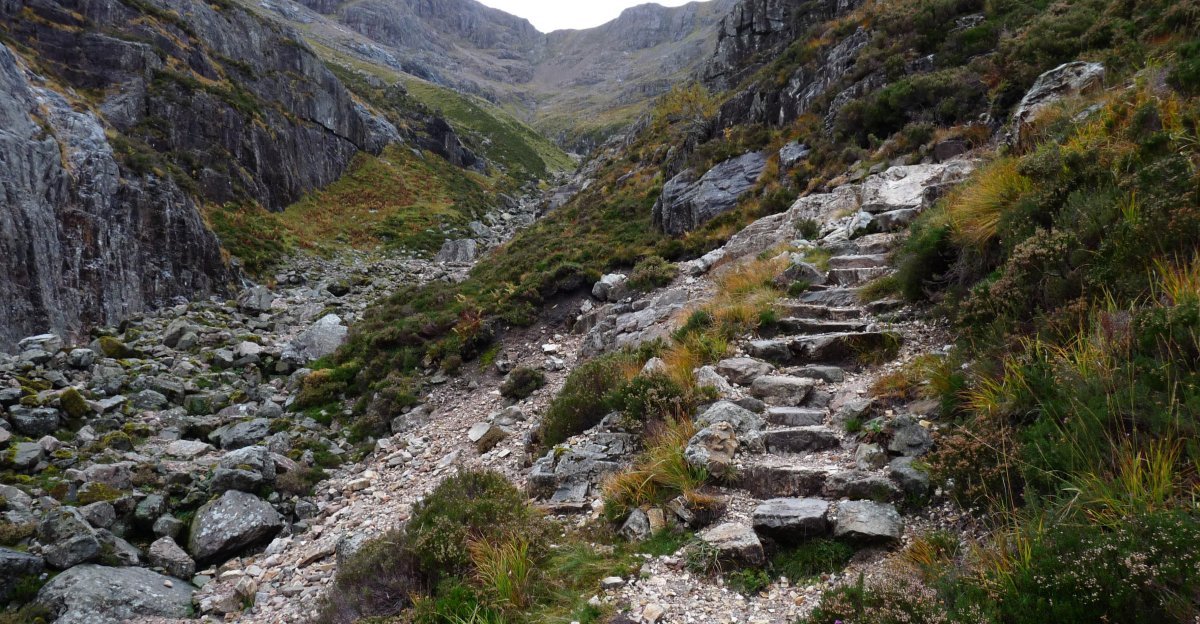 The path is steep, but well built and although the stones are wet the footing is good here 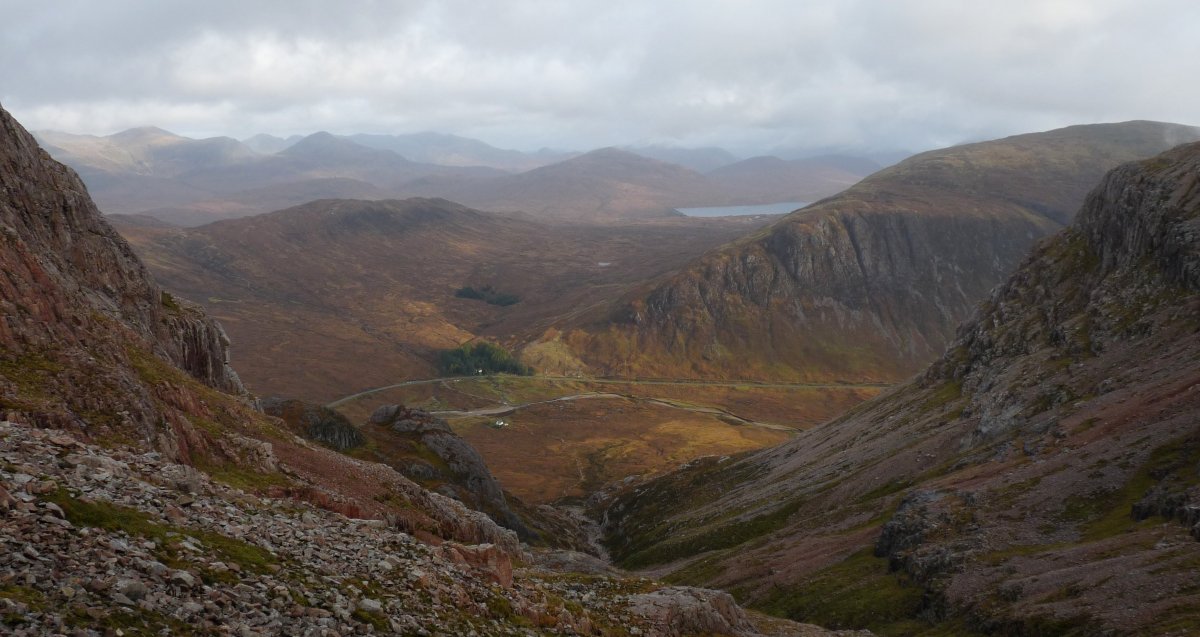 The height is gained quickly and painfully, but the views are a great anaesthetic 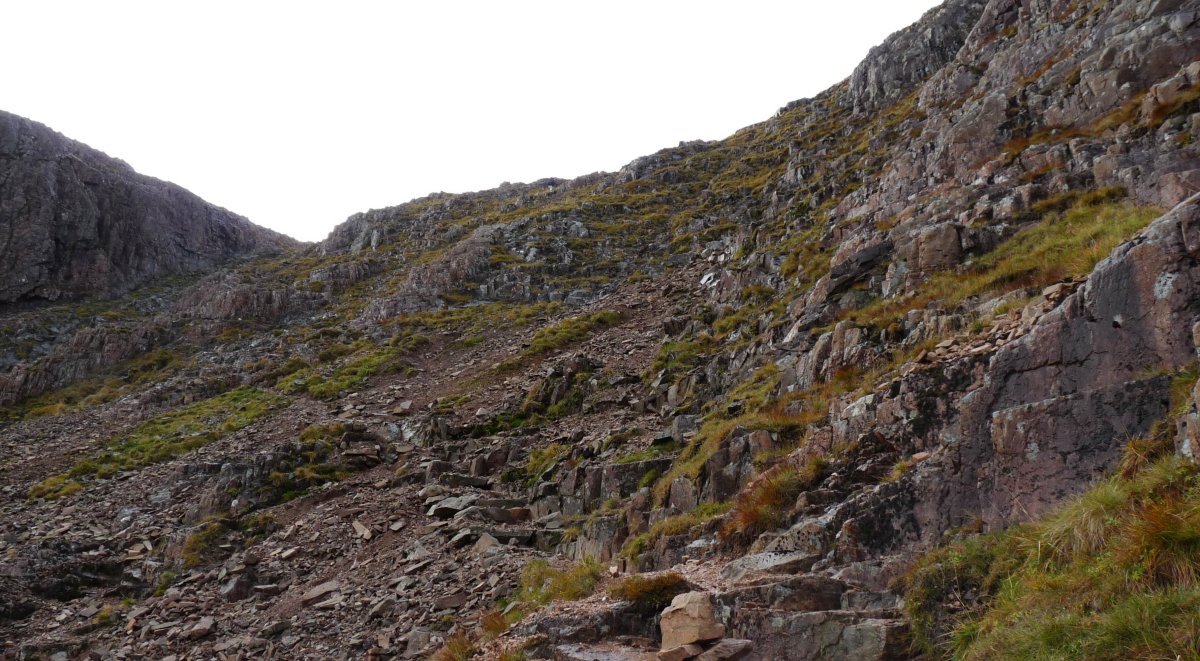 I’ve blown up a photo of the top of the Coire and shown the path that cuts across the top in red. The path was wet here and I didn’t realise that I’d already passed a much easier route to the top of the ridge. At approximately the yellow cross my left boot slipped on a wet rock and my leg shot out into nothingness. I slid off the narrow path and skittered and slithered over wet rocks and grass for about 10 or 15 feet (the green line) before my right leg finally gripped something firm and my fingers managed to gain some purchase on a piece of rock.

I was hanging precariously above a very steep drop off, at least 30 feet to the next surface which I think would have been too steep to stop my descent even when I’d reached it. The hill is very steep here and I could have fallen a good deal further. My pole was still clattering away down the little gully. A point to be made here – I never loop my hand through the pole’s webbing when I may need to get rid of it in a hurry – especially scrambling or when there’s any amount of hand on rock needed. If I’d had the pole attached to my wrist it’s debatable whether my right hand would have found any purchase where it did and it could have been me and my pole clattering down the face of the mountain right now.

My left leg was dangling over the edge of the drop and my right foot was wedged somewhere up near my waist in a joint of rock. I pushed myself up with the right leg and kicked a foothold into a patch of grass with my left. When I was sure I was not going to slip any further I found better handholds and secured my position. My heart was hammering inside my chest and I felt sick with adrenalin. I waited for a few seconds before I started to pick a tentative route back to the path.

Yes, it is as steep as it looks!

A face peered out over the edge of the ridge and a voice called out “Everything alright down there?” The two guys had heard my slide down the hill, stones I’d dislodged had started a small scree slide and my pole had clattered loudly on the rocks. I shouted up that I was okay and once I was back on the path I thought I almost believed it myself. Once my legs had stopped shaking I climbed the rest of the way to the ridge to find the two guys waiting for me. “You were almost a rescue party” I explained and shook off my pack to sit down for a m
inute.

My legs were both badly scraped on the shins and my right forearm was also battered. The loss of my pole which had been with me throughout my short walking career was also painful. I think the two guys could see how shaken I was and they suggested I walk with them for a while. I happily agreed and once I’d managed to get my heart rate under control we continued up the ridge towards the summit of Stob Dearg.

Looking down at the slope I nearly fell down

Without the kindness and thoughtfulness of the two guys Bill and Robert, I think I would have probably sat around at the top of the climb, feeling sorry for myself and convincing myself of the need to return to the car and have a little cry. Although they didn’t say anything, their “come on let’s get on with it” attitude helped me get back on the horse that had just thrown me.

We walked into the cloud along a much less steep track to the summit of Stob Dearg. Before I knew it we were there, although looking at the tracklog from my GPS it was actually 30 minutes of steady climbing. My nerves were calming, but I must have had a lot on my mind during that climb because I remember next to nothing about it. 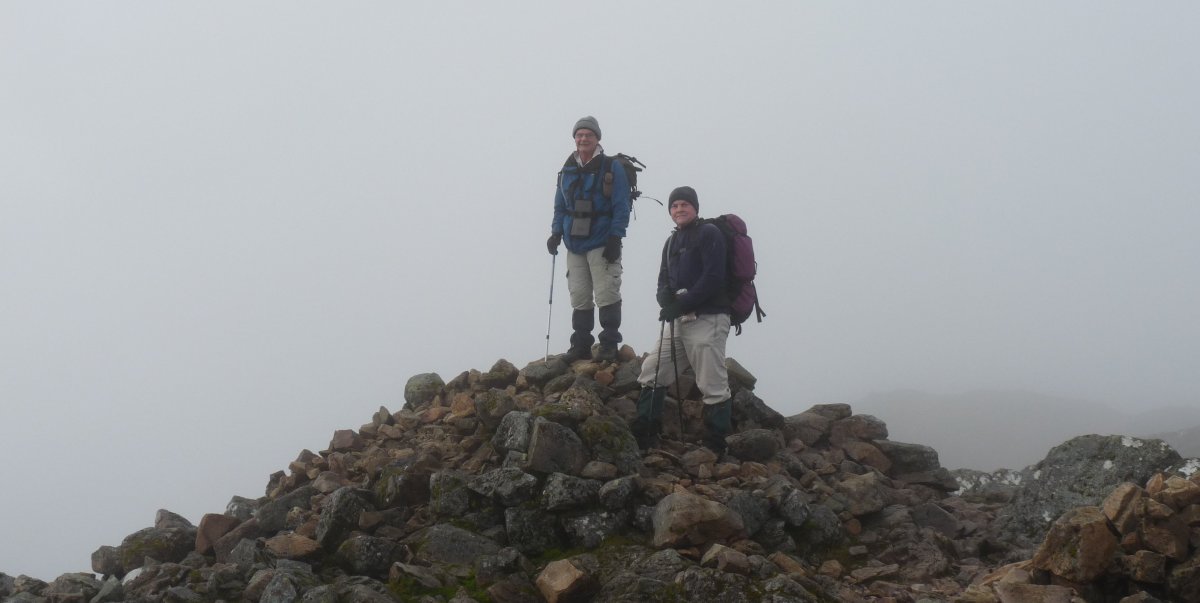 Bill and Robert on Stob Dearg

We retraced our steps off Stob Dearg to pick up the path at the top of the Coire and make our way across to Stob na Doire.

Stob na Doire is one of those odd Scottish hills that is over 1000 metres high, but does not qualify to be a Munro, whereas the hill next to it; Stob na Broige is only 956m and does qualify. I’m not a Munro bagger and I don’t know the complexities of the qualification system, but I guess it’s got something to do with the height drop between the top of the hill and the col.

All the tops were covered today and there didn’t seem like much chance of it shifting like yesterday on Schiehallion.

On the climb up Stob na Doire

The summit of Stob na Doire was a windy desolate place and the path off the top is not obvious in the mist. The guys took a compass bearing and I dragged out the GPS and together we agreed on the right course and set out on the steep descent down the other side.

My left leg was beginning to hurt like fury now, so I swallowed a couple of double strength Ibuprofen and decided to cut the walk short. Rather than continue to the next Munro and then backtrack to the path off the hill, I headed for the path directly. I said my farewells to the two guys and struck out down the steep path.

Robert and Bill head off towards their second Munro and I take the path to the right, down the hillside 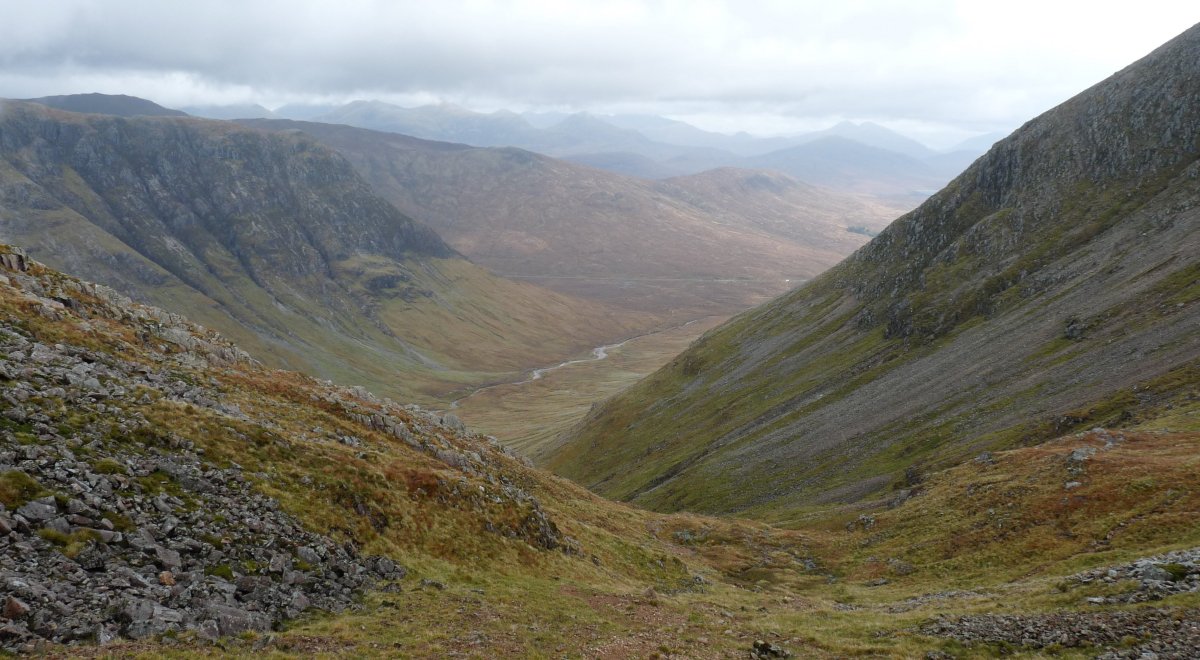 Once I was out of the worst of the wind, I stopped for a while for lunch and to take stock of my legs. Both shins were grazed and bloody and both were swelling up nicely. My right forearm was also swelling up and was very tender to the touch (so I didn’t touch it anymore). I was sure I would be able to make it back to the car, it just wasn’t going to be much fun.

The packed lunch was excellent; the fruit salad was fantastic and I felt loads better just getting that inside me. After my 15 minute break though my legs were quite wobbly and it took me a while to get back into the rhythm of walking steeply downhill. I was taking no chances at all though, especially as I was without my pole, which I rely on quite heavily on descents. The rocks were slippery and the descent took me ages.

Reaching the valley floor after the descent through Coire Altruim 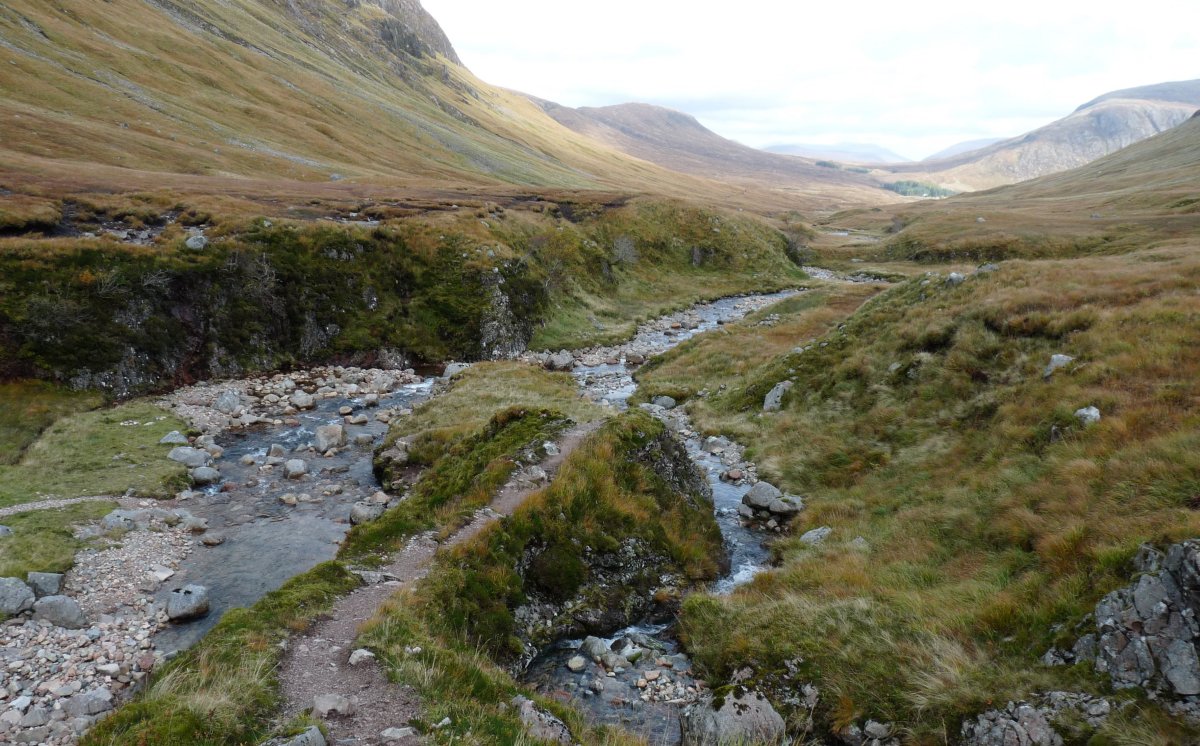 Picking up the River Coupall that runs through Lairig Gartain 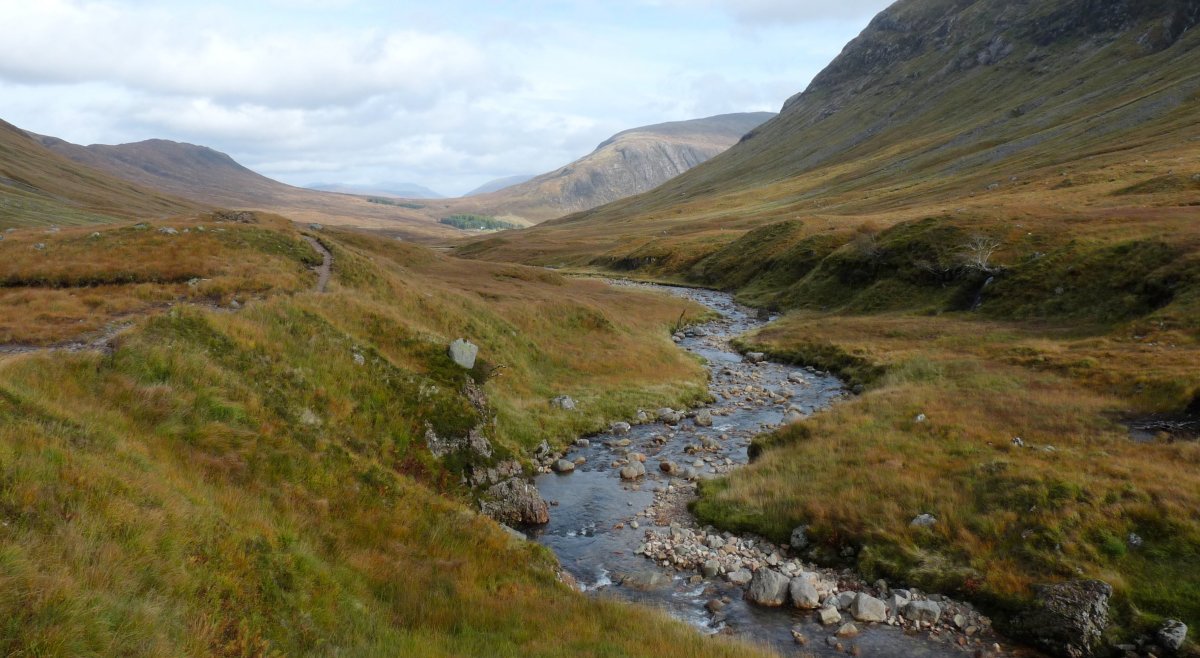 The path is clear but very wet beside the River Coupall

The Lairig Gartain is another great place to walk through, full of history but also full of peat bogs. The path is clear but very wet in places and I eventually abandoned it to look for a drier route slightly further up the hillside.

Returning to the car.

I finally made it back to the car with mostly dry feet, although my legs were splattered with mud and mucky water. I changed into clean clothes for the 5 hour drive home and as I was about to set off, Robert and Bill arrived back. I thanked them again for their company and exchanged email addresses for photographic swap-shop purposes.

I left Glen Coe at 14:00 and it wasn’t until 20:00 that I arrived home, thanks to lots of lovely road works on the M74 and M6. Walking is great, surviving is even better and roadworks suck big time.