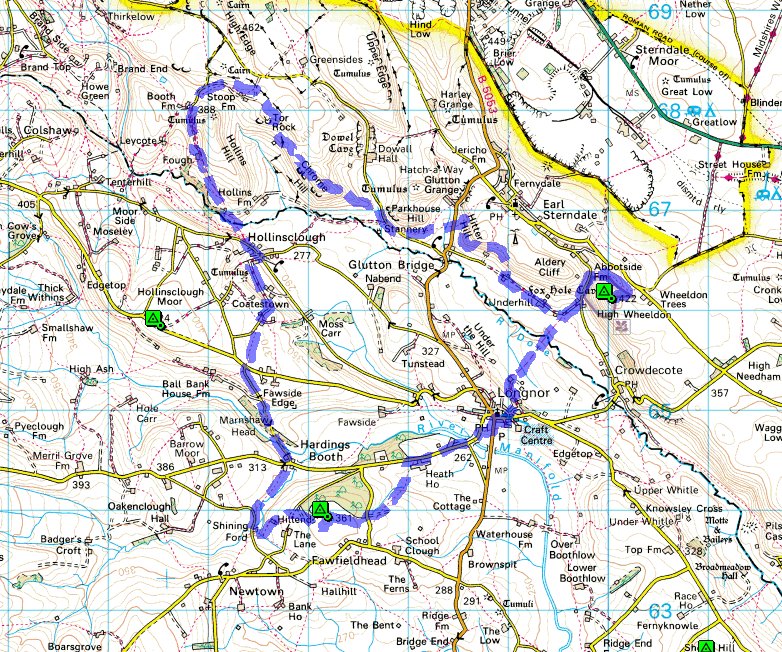 Rather oddly I was on a training course this week. Which in itself is not odd at all. The odd part is that it was a virtual learning course, conducted over the web with special software and unfortunately being run from California! The result is a 16:00 start to my working day and a 23:00 finish. This time shifting allowed me to get out on a couple of walks though and take advantage of the reasonable weather this week.

I decided to start in the Peaks, a recent snow shower dissuaded me from attempting anything high in the Lakes; simply because that’s when you start to need ice axes and crampons – hardware I don’t think i will ever possess. Judging by Rambling Pete’s walk up the Old Man though – I missed a treat (his walk report can be found here). I chose a route along the Dragon’s Back; a series of exposed coral reefs running end-to-end for a couple of miles near Longnor. There was also a pair of trig points that I should have bagged on a previous walk, but had missed due to time constraints. 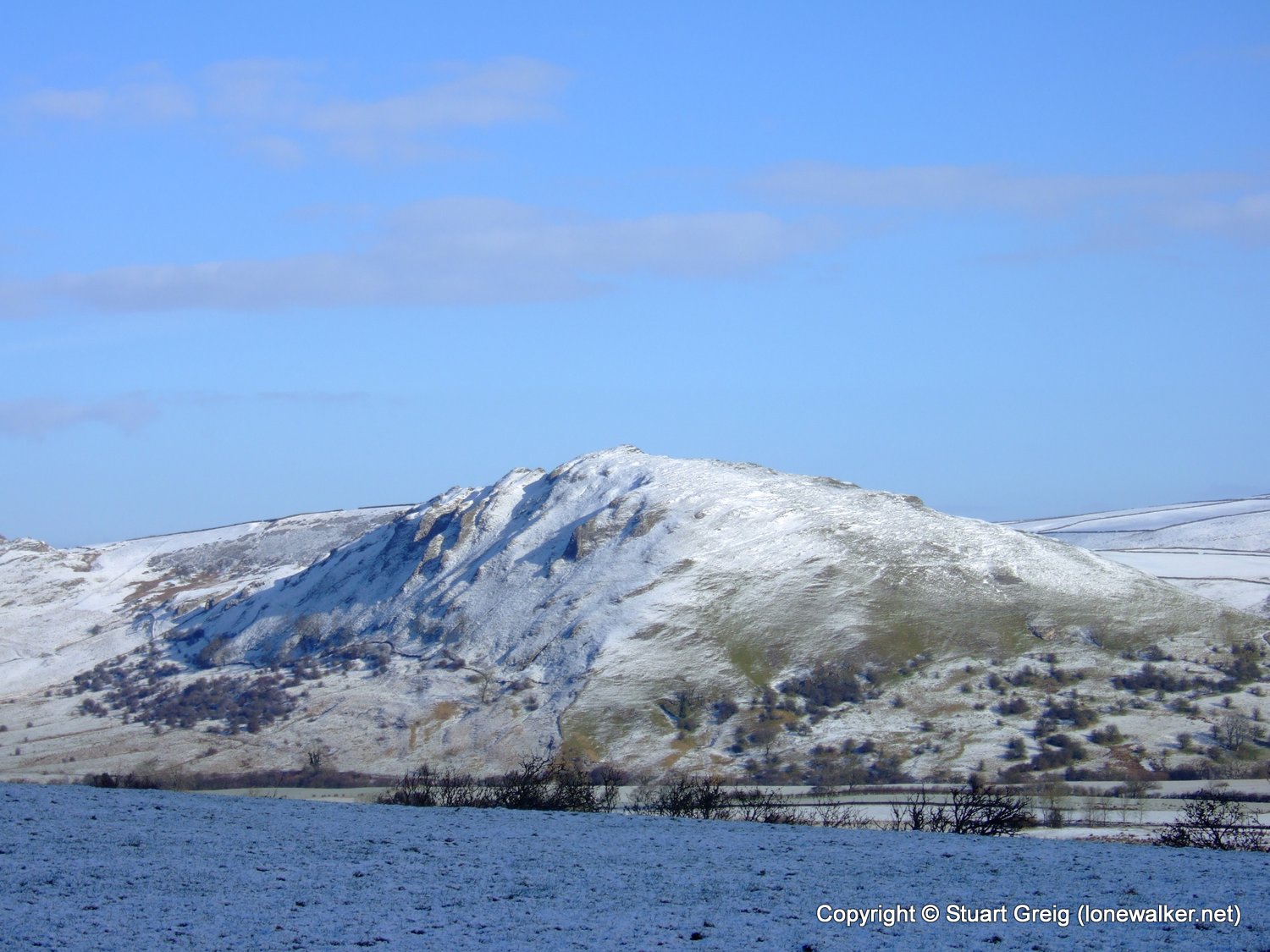 The drive in to the Peaks was wonderful, everywhere was covered in a couple of inches of snow and there were small drifts alongside many of the roads, certainly off the main thoroughfares. This is Chrome Hill seen from the Hollinsclough to Longnor road. I couldn’t resist stopping to get a shot. 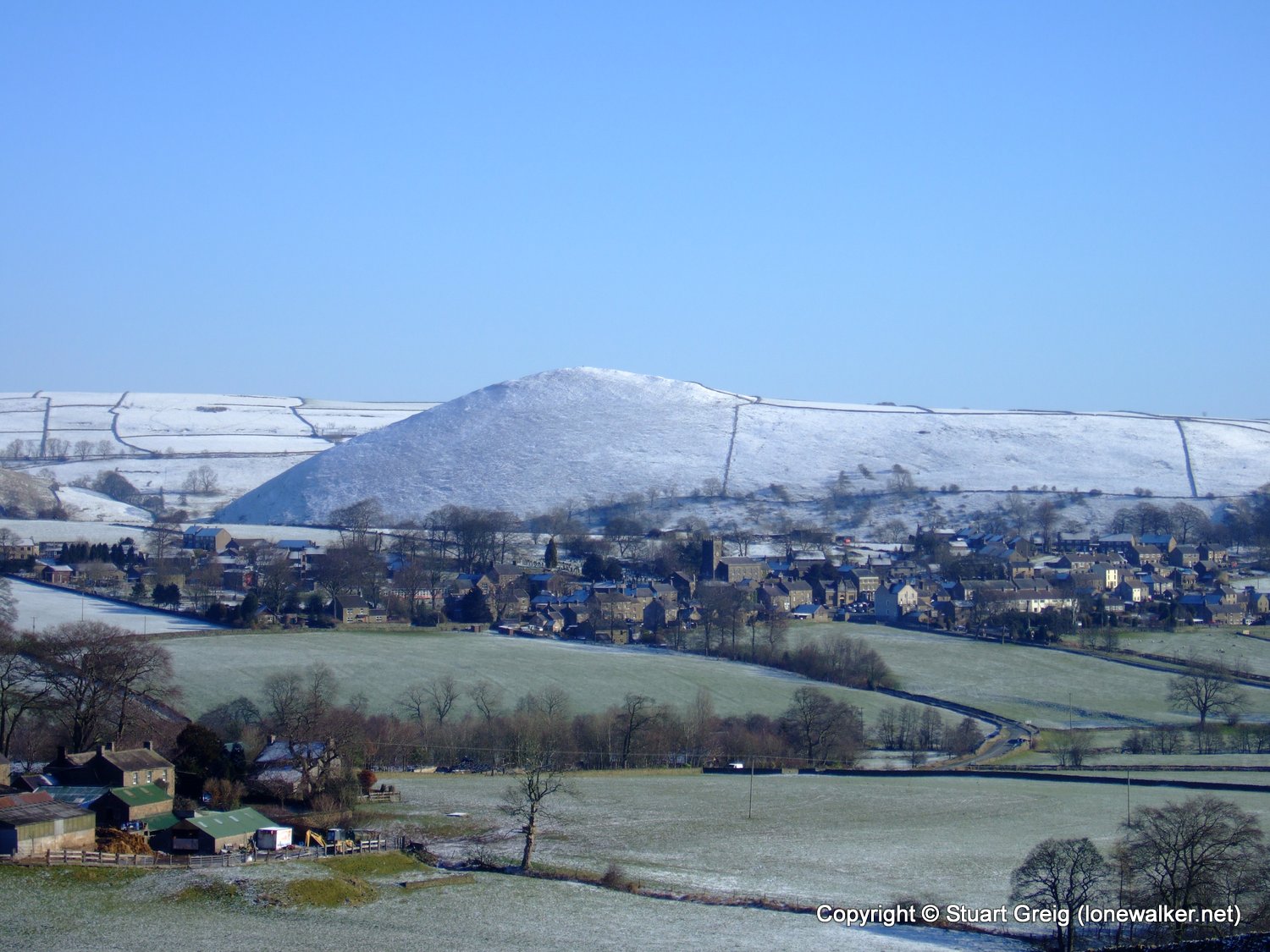 Although the depth is deceptive, this is Longnor with High Wheeldon in the background. The snow was already beginning to melt off. When I was in the sunshine and sheltered from the wind this was a lovely warm walk. Unfortunately when the wind hit and I was in shade it was bitterly cold. I started the walk in just base layer and thin fleece but soon had to don my coat to combat the wind and cold. In fact I put my coat on and took it off again, three times during the day. 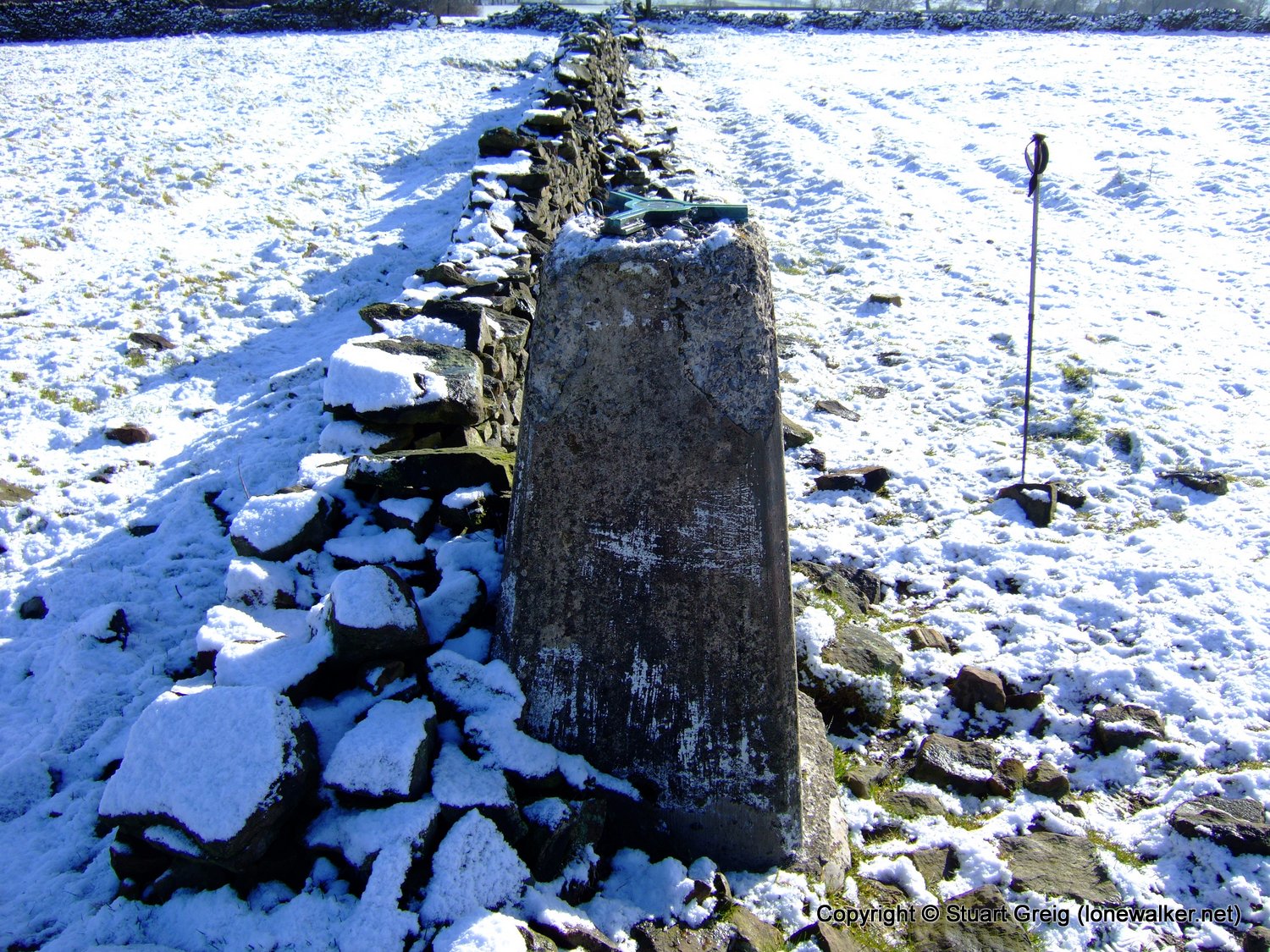 First stop of the morning was the trig point at Hardings Booth. A good covering of snow underfoot here. I needed to trespass a little bit to bag this one and it was overlooked by a caravan park all the way. A surprising number of “tin tents” were already in-situ in the park – takes all sorts I suppose. 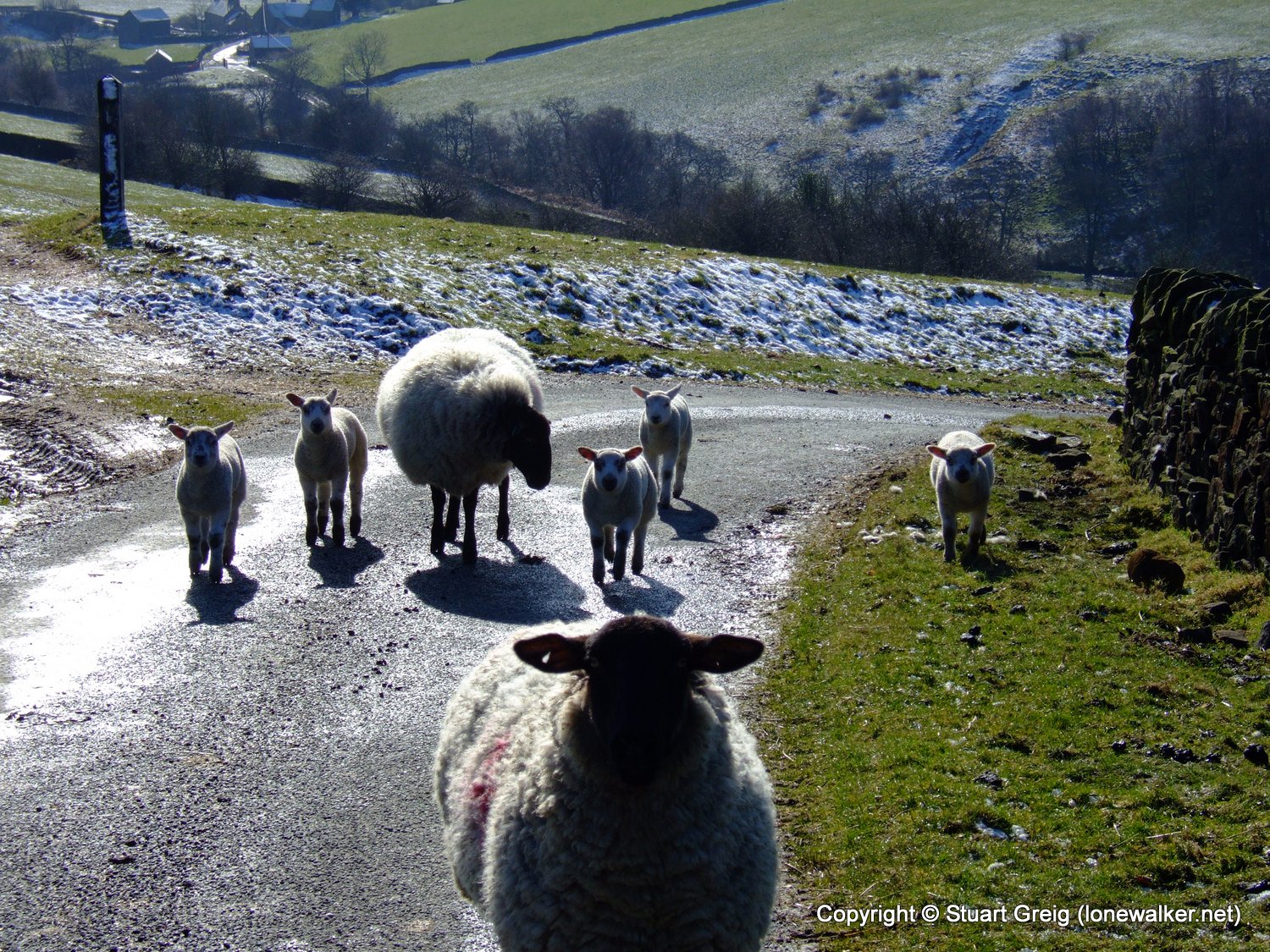 The sheep and early spring lambs were delighted to see me! I think they were hoping for a hand-out. These lambs look to be a few weeks old already and bleated for ages, even after I left them behind – the other side of a cattle grid. 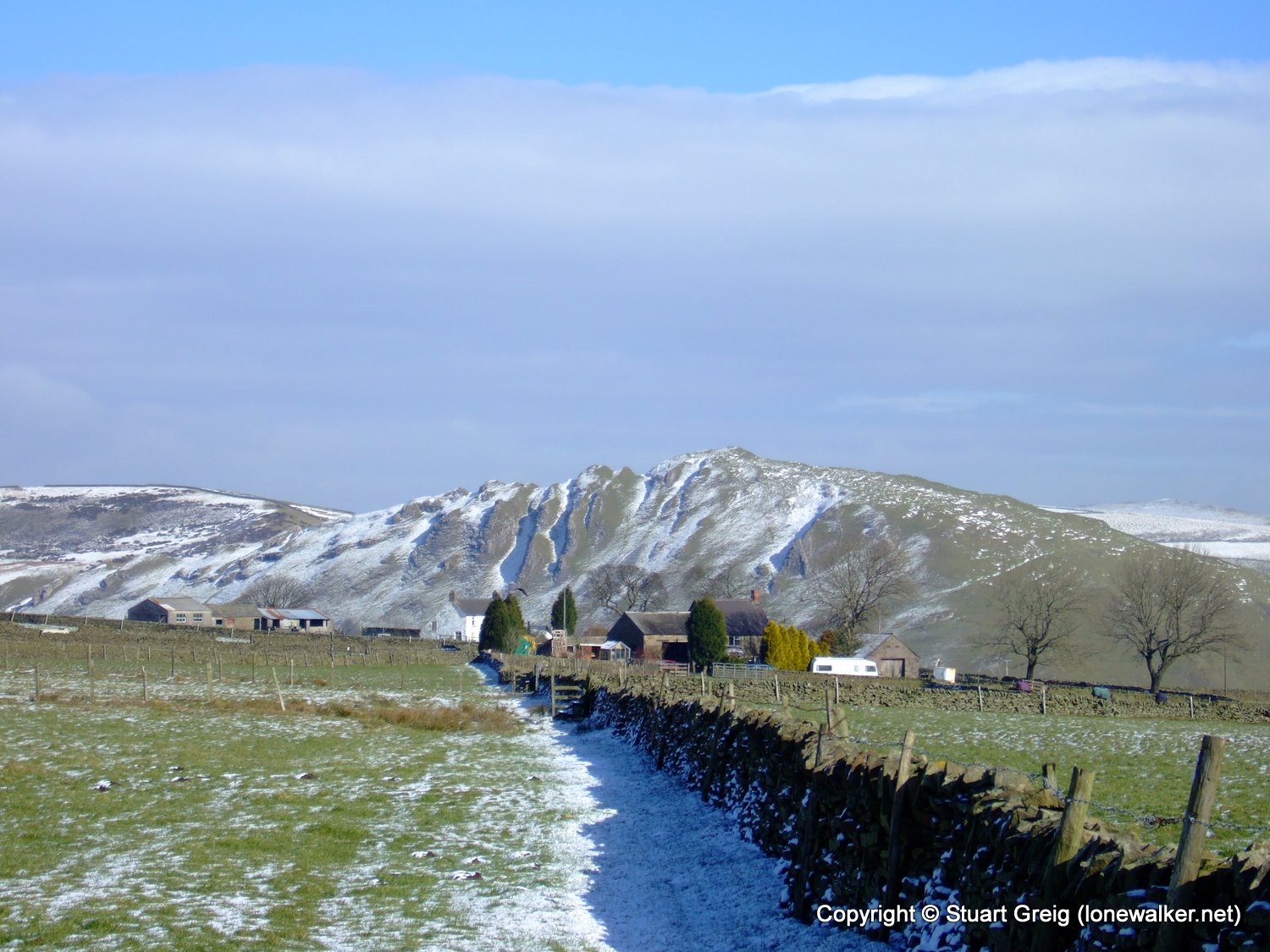 In the lower sections of the walk the snow has mostly melted away, except in the shade of walls. Looking towards Chrome Hill here. 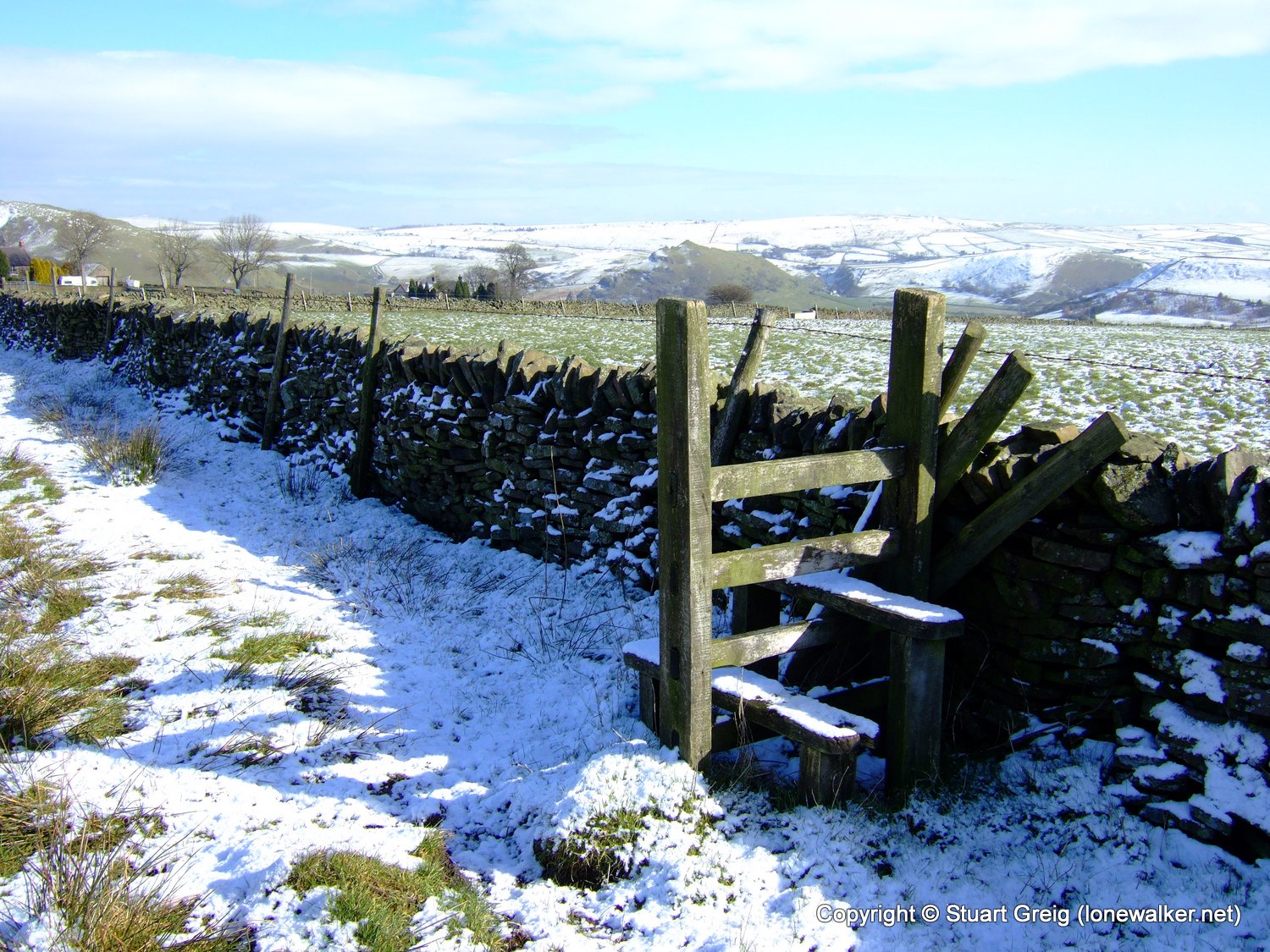 And the prize for the most pointless stile goes to…. In fact this is not quite as pointless as the stile Mich and Sid came across recently. The fence has been removed temporarily just out of shot 🙂 The next stile along this wall gave me the biggest fright I’ve had since I started walking though! The top step had come away from the supporting pole and as I placed my weight on it the step slid away and my leg fell between the top plank and the bottom step, I lost my balance and fell sideways to land on the floor in a heap. If the top step had slid the other way my leg would have been stuck between the two steps and my body weight falling in the other direction would certainly have snapped my trapped leg. A sobering thought to say the least. 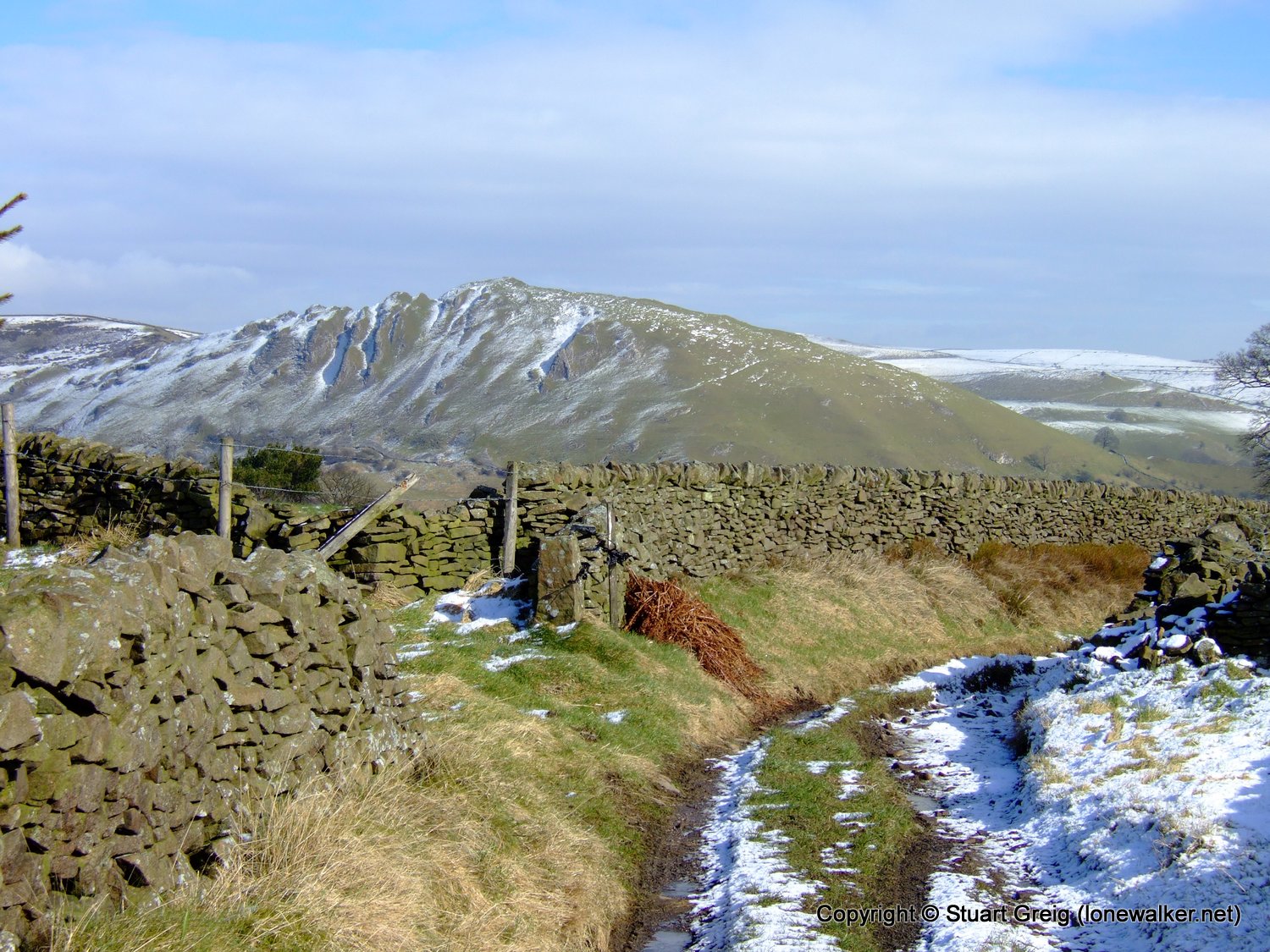 The rutted farm track leading down to Hollinsclough, the ever present Chrome Hill in the background. 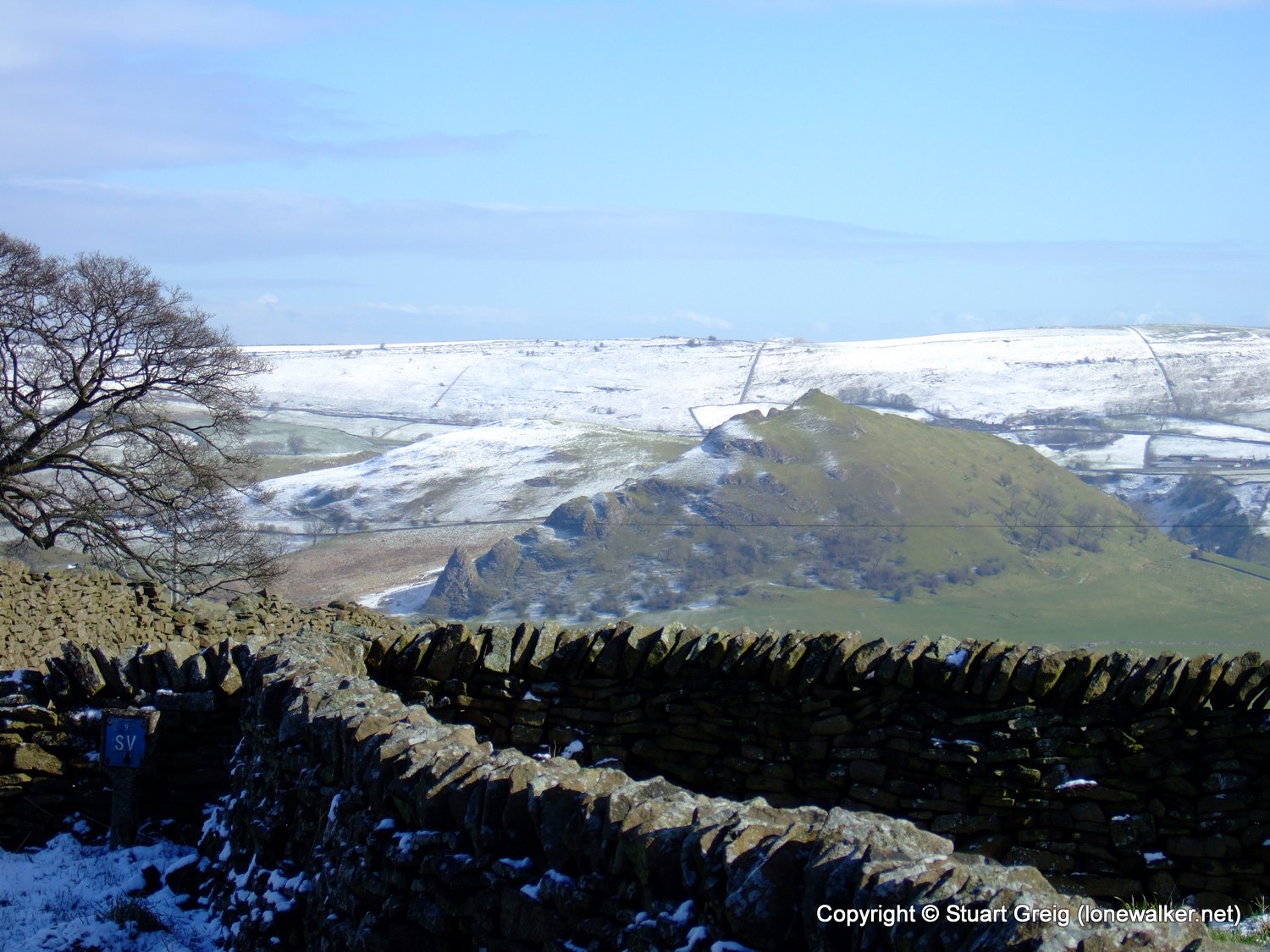 Parkhouse Hill is another of the hills that make up the Dragon’s Back. 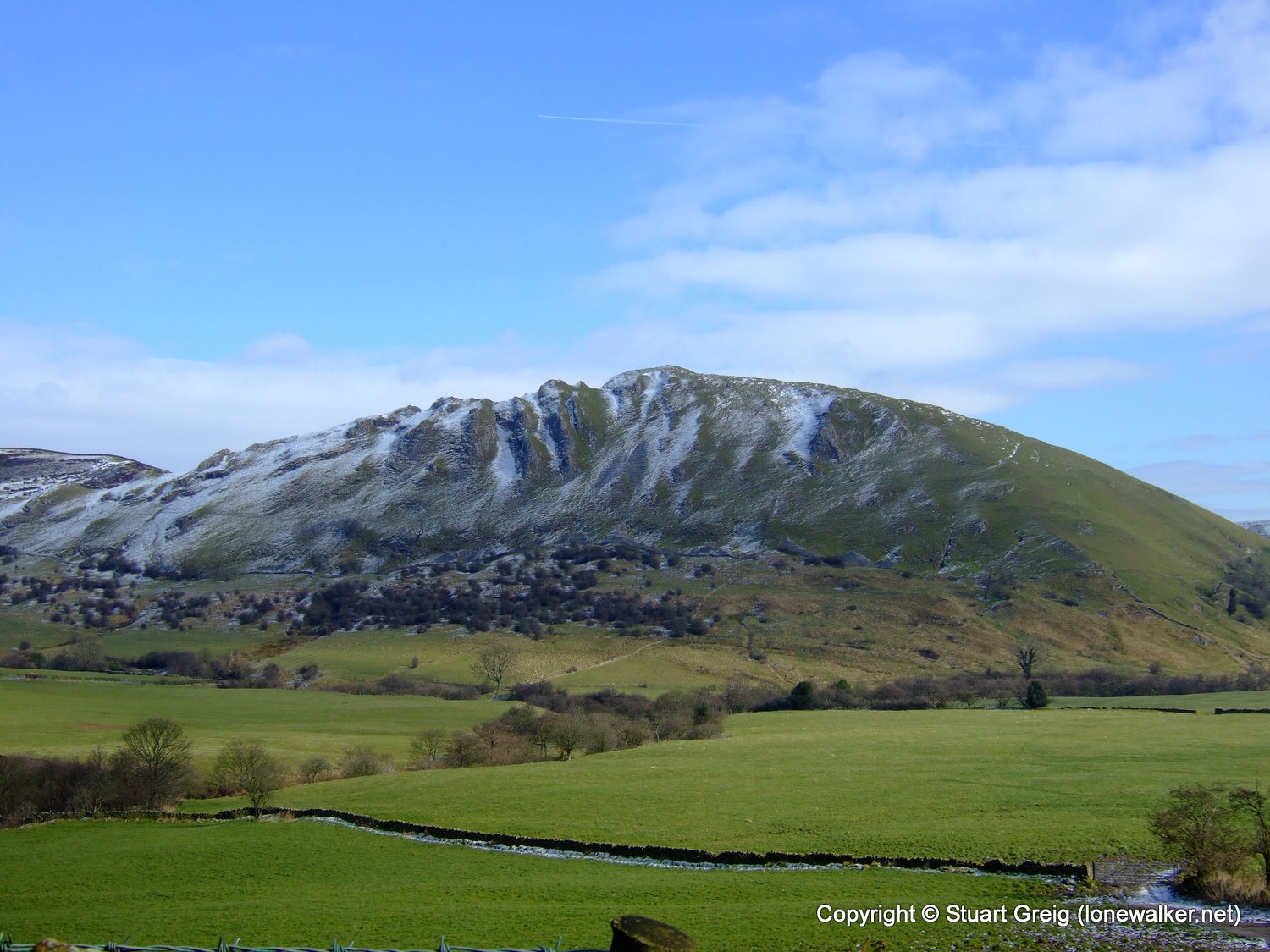 You know what this is by now. Nearly all the snow has gone from the western flanks of the hill, highlighting the contours nicely. 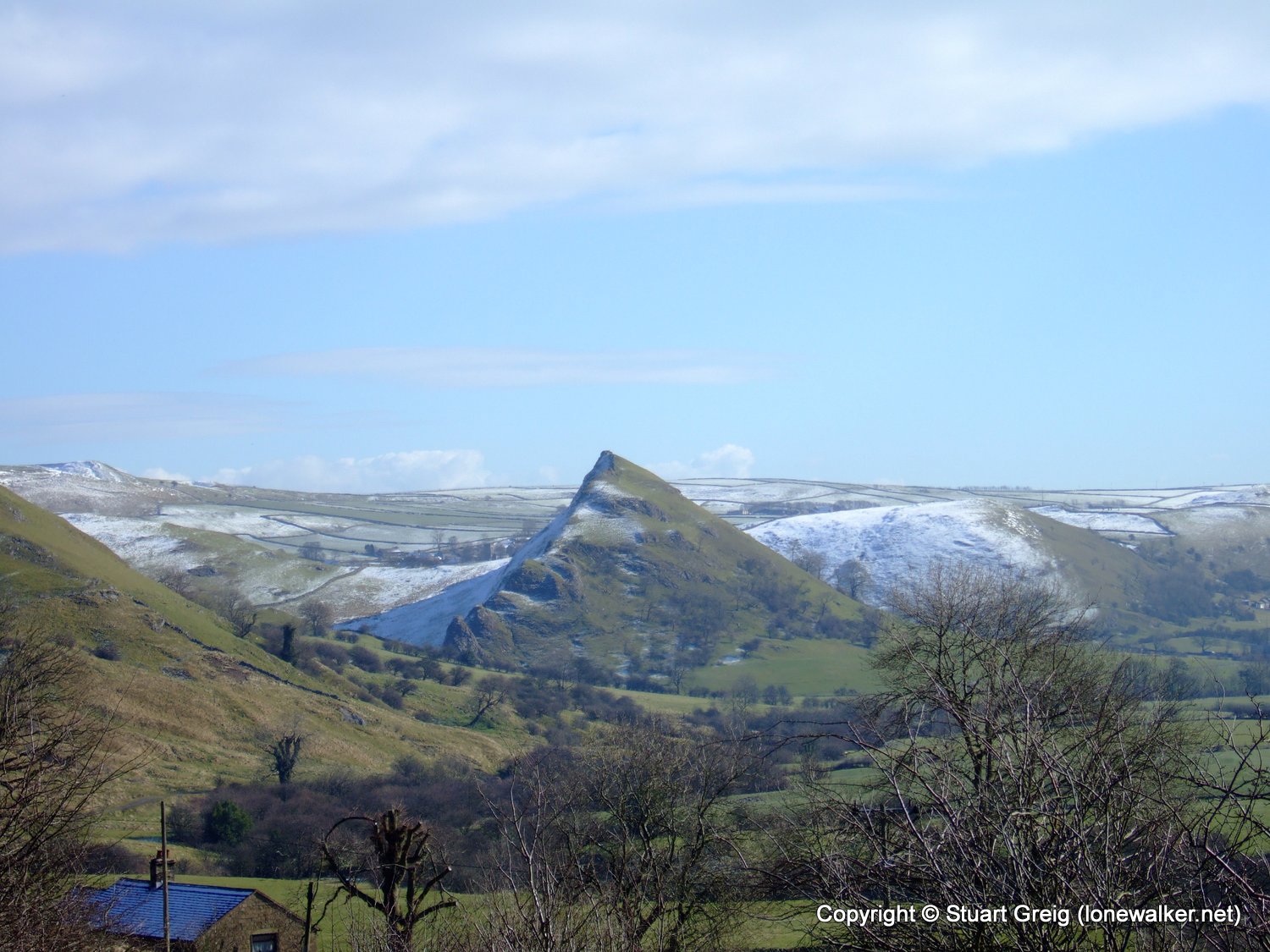 Looking down the length of Parkhouse Hill with High Wheeldon behind it. 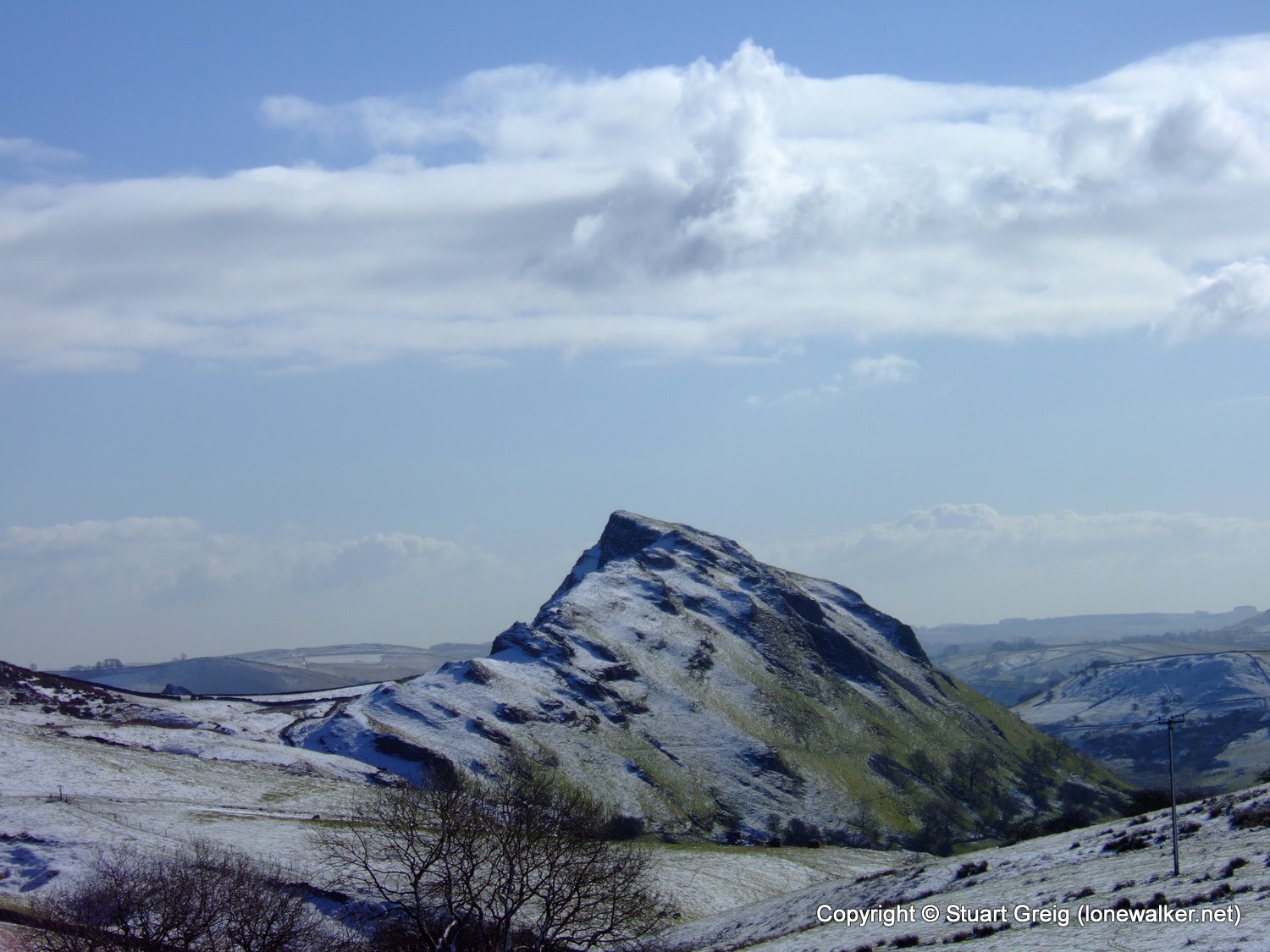 I’ve looped around Hollins Hill now and I’m approaching Chrome Hill from the north west. Although there is no public right of way across the hill and it’s not actually on access land, there has been a concessionary agreement reached with the landowner to allow access to this superb pointy summit. I guess it was either that or just live with all the walkers who were trespassing on the hill anyway.

The best way to get on the hill from the north is to head for the Stoop farm access road that leaves the minor public road at SK065683. From here there are signposts showing the concessionary path to Chrome Hill. The path runs around the north of Tor Rock and then drops down steeply to the base of Chrome Hill. 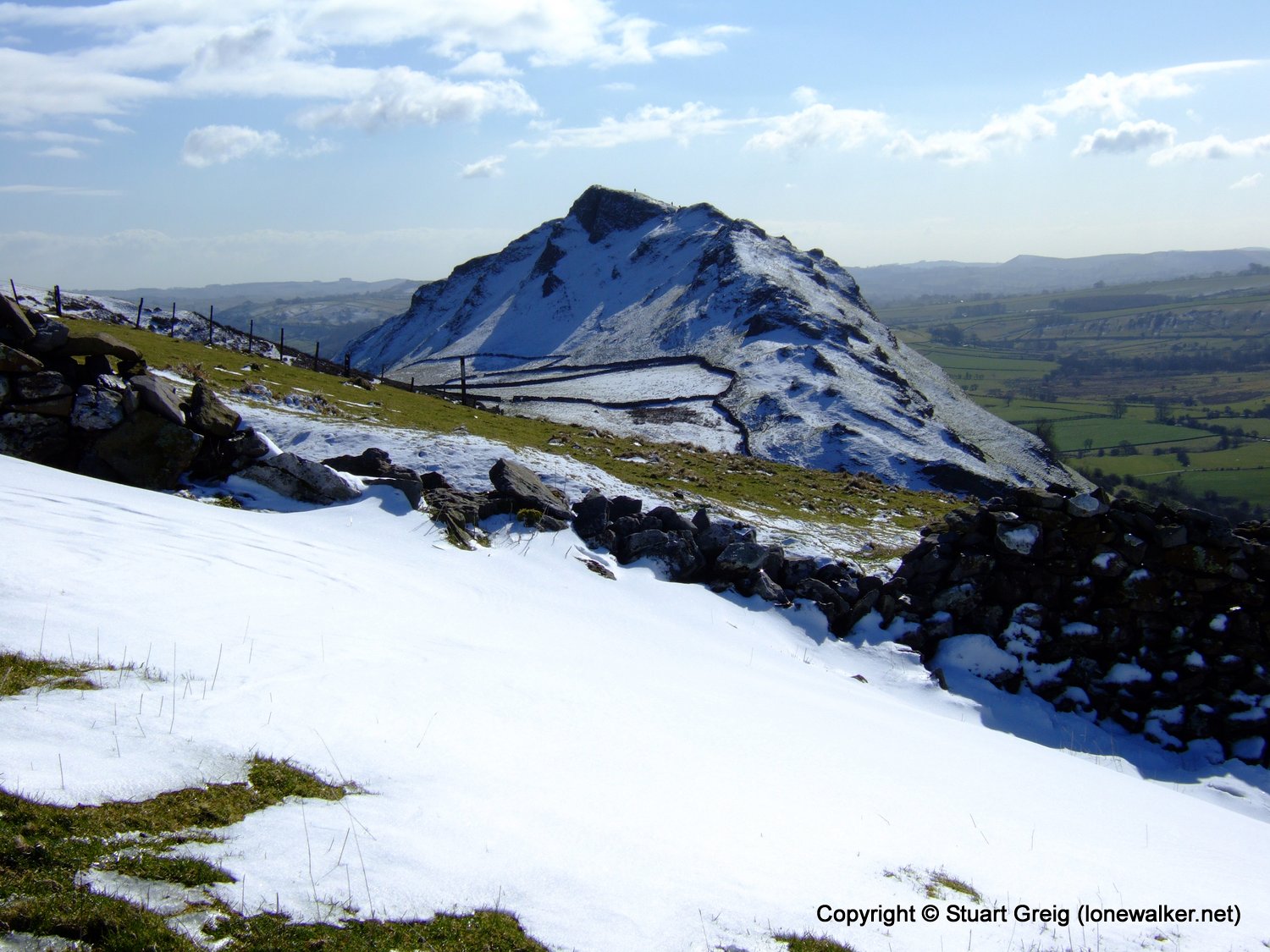 Still some of the deeper drifts of snow hanging around to add an interesting foreground fill to shots like this. 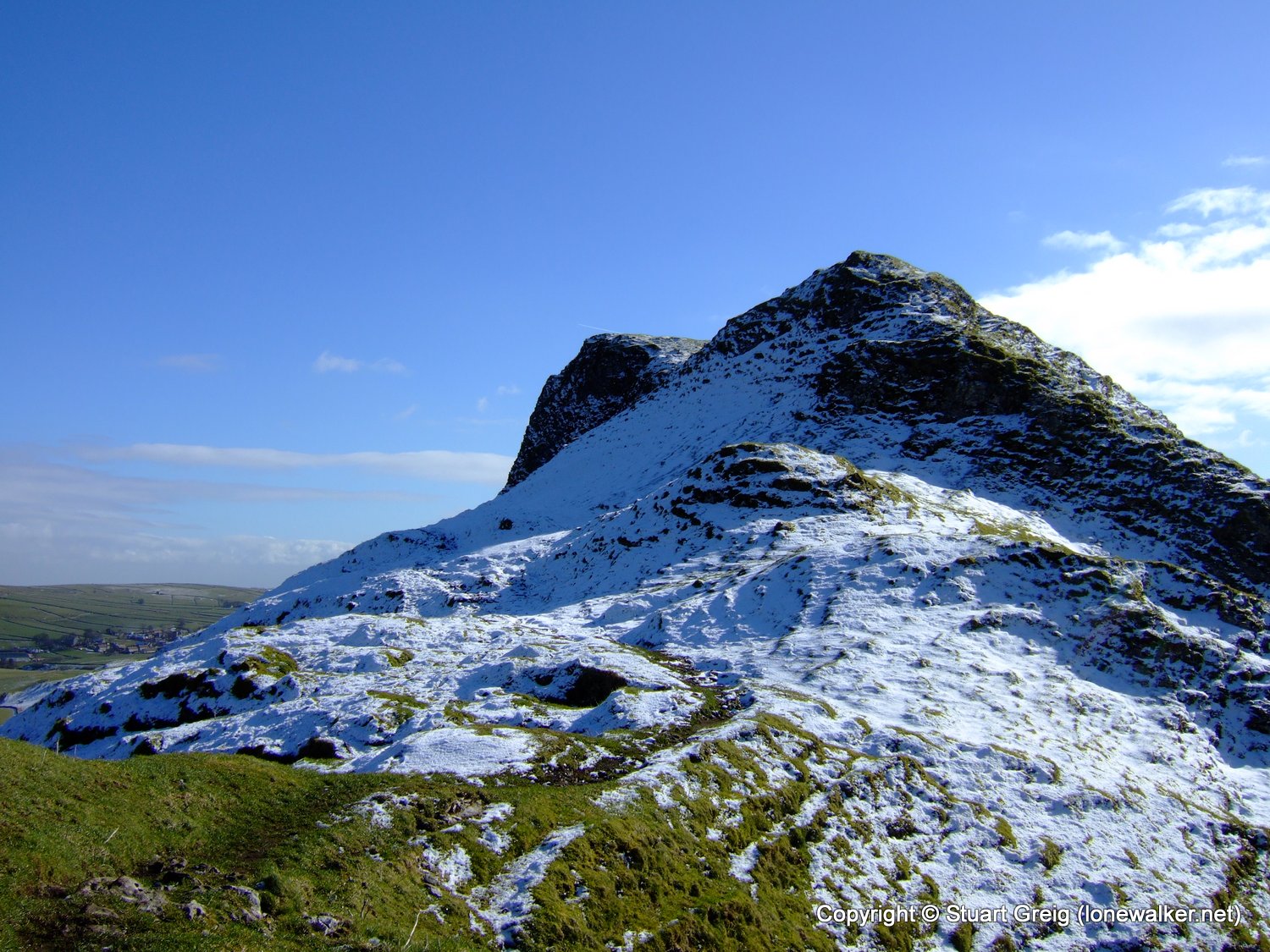 Approaching the summit. Very, very windy at this point and bitterly cold. 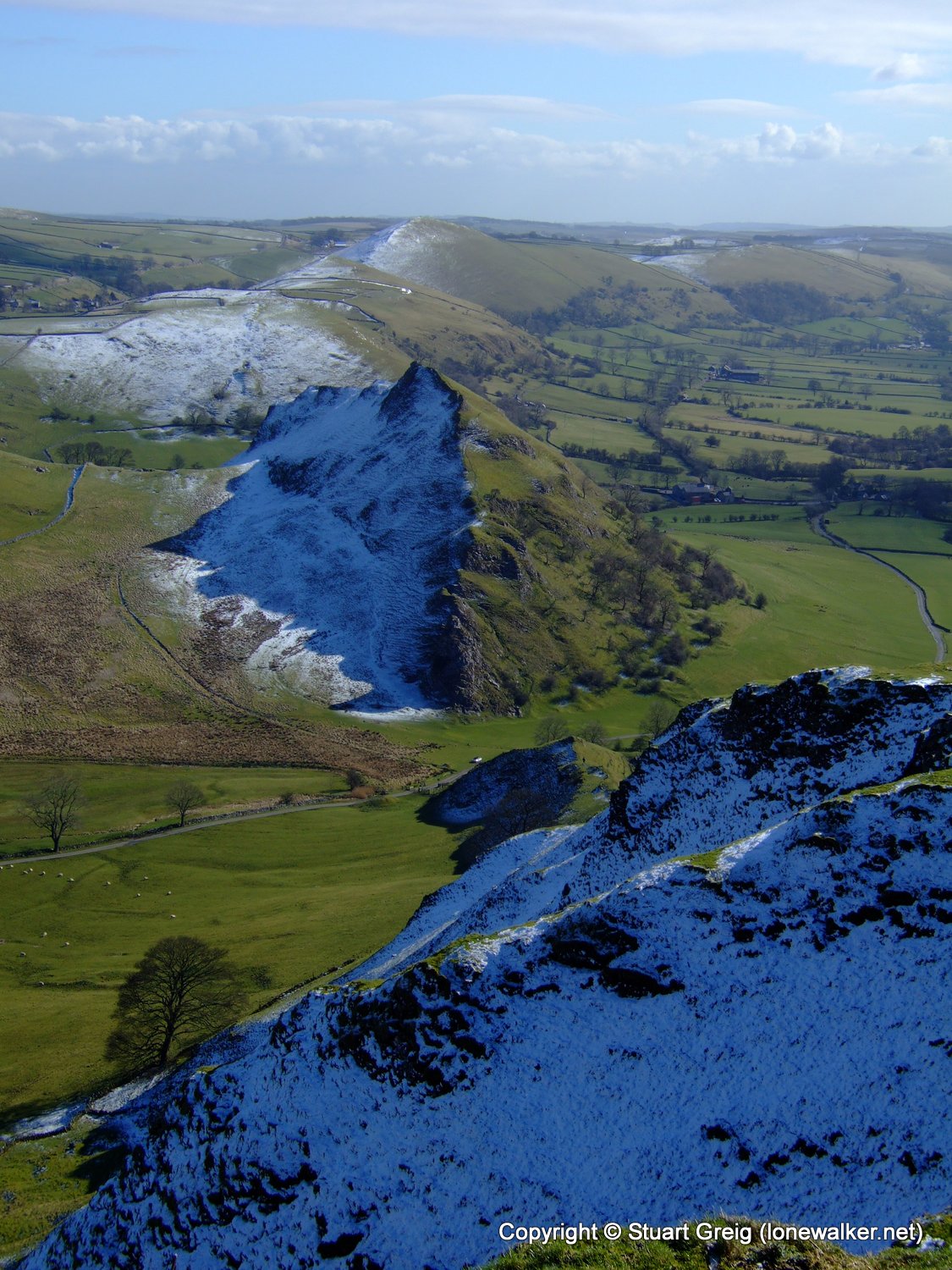 The view of Parkhouse Hill, Hitter Hill and High Wheeldon from the summit of Chrome Hill. I’d decided to skip the steep climb up Parkhouse Hill, just so I had the energy to reach the top of High Wheeldon, which has a trig point. I like the way the hill is green on one side and white on the other. 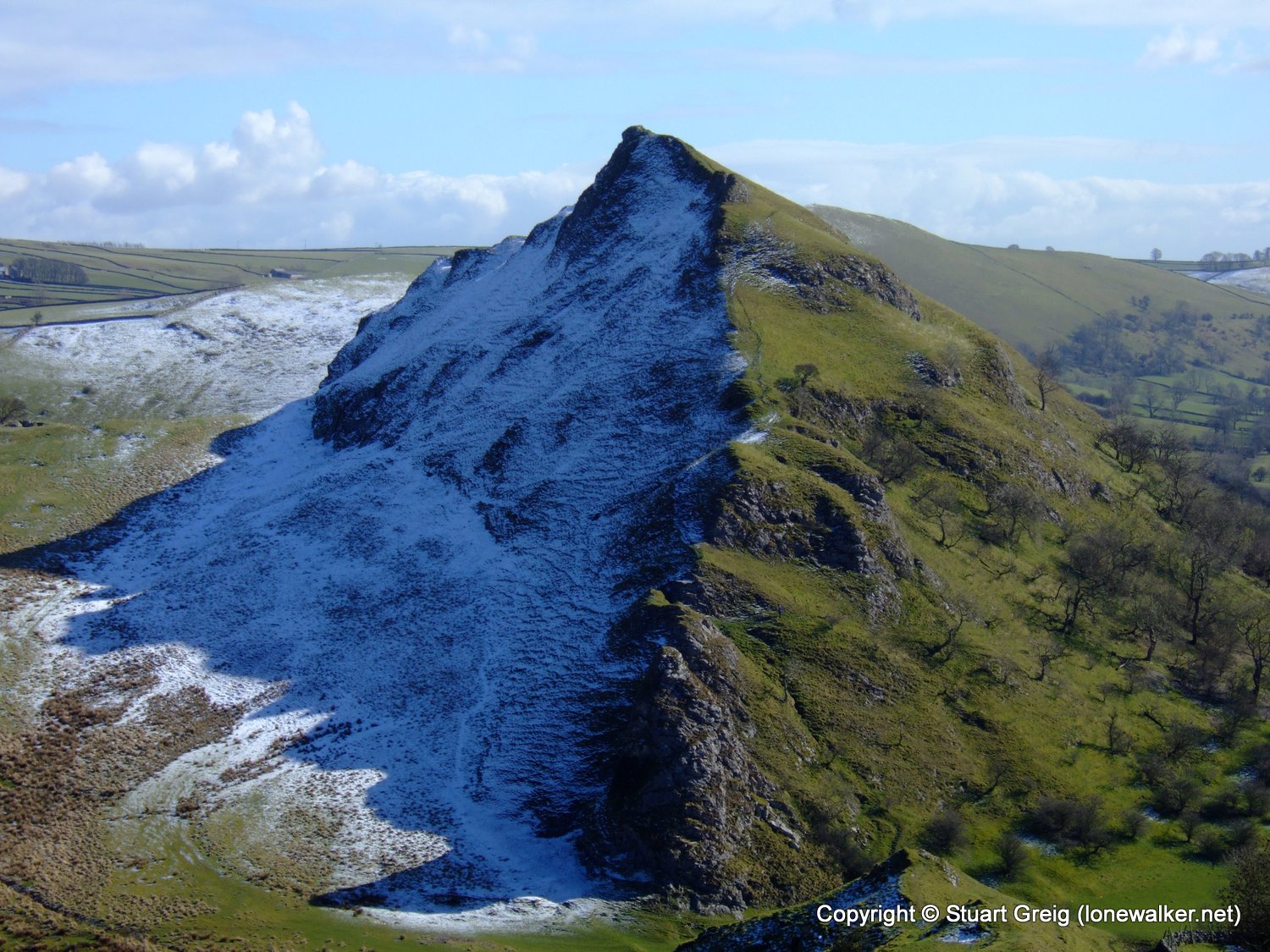 A closer look at Parkhouse Hill, you can just see the path leading up from the base. 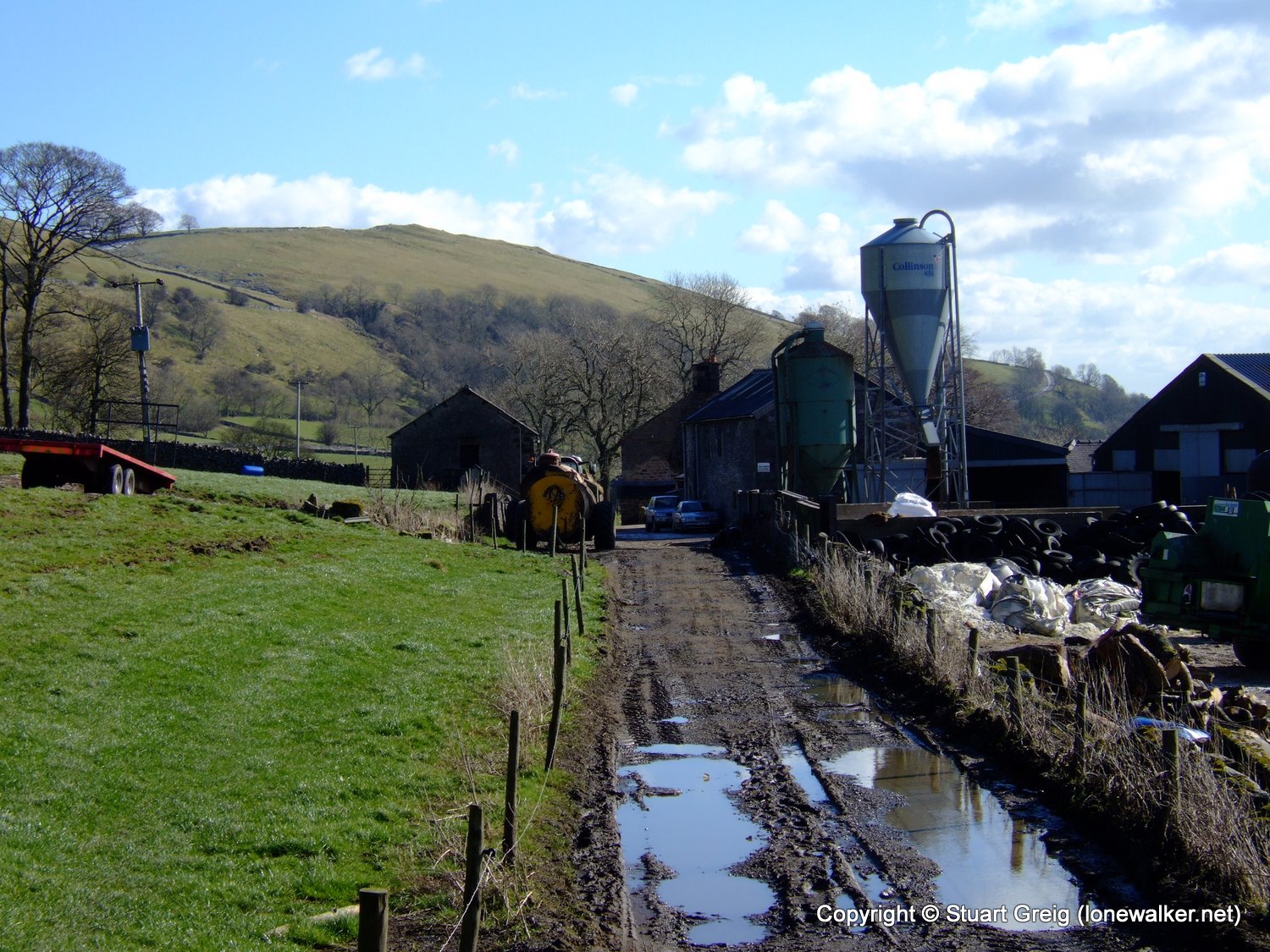 Of course, now that the snow and ice have melted, its mud everywhere! The stark contrast of smelly farm and beautiful hills which you get quite a lot of in the Peak District. 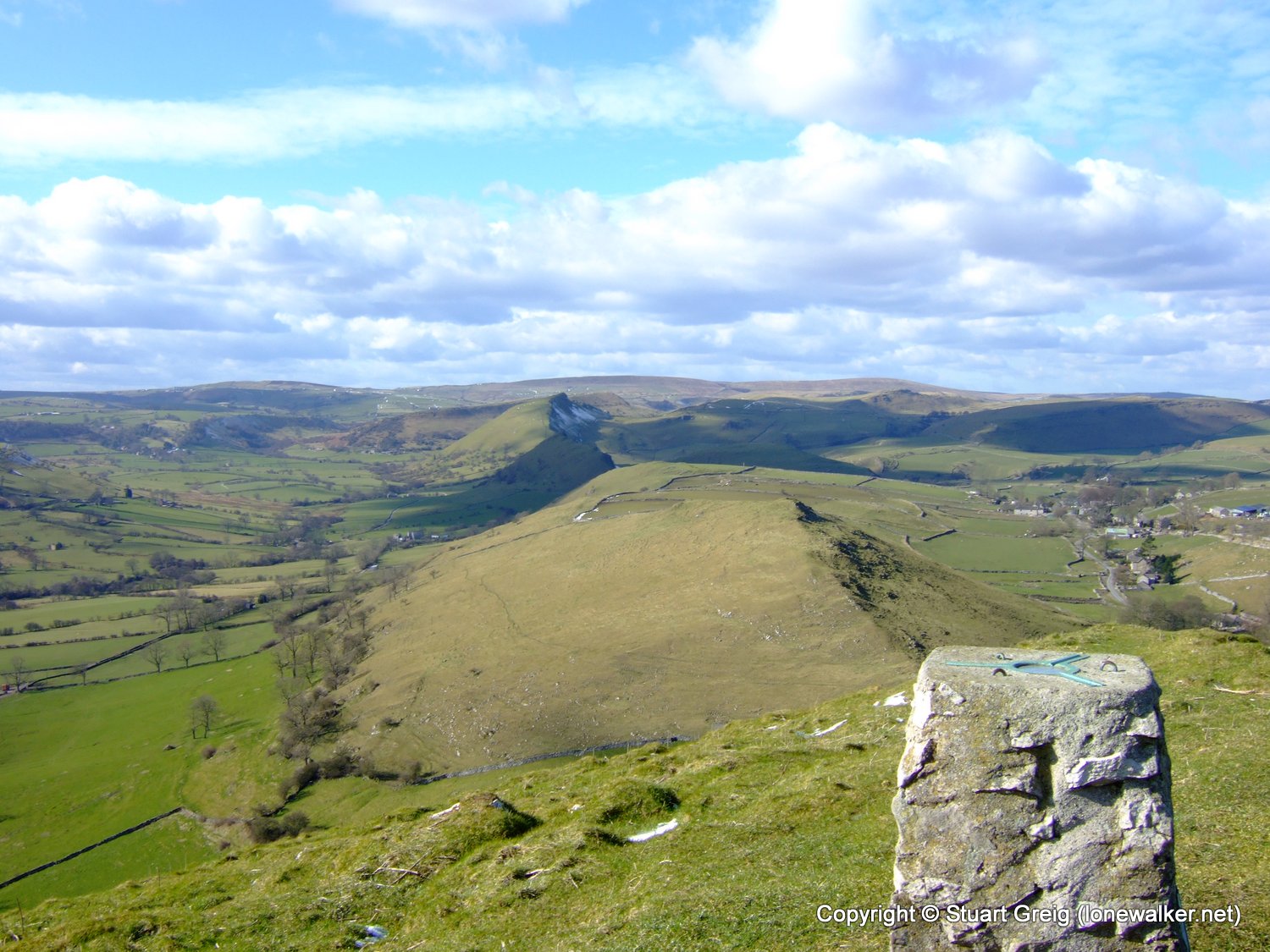 Made it! The summit of High Wheeldon, looking back along the route. Hitter Hill in the foreground, with Parkhouse Hill in shade and the curving sharp ridge of Chrome Hill. 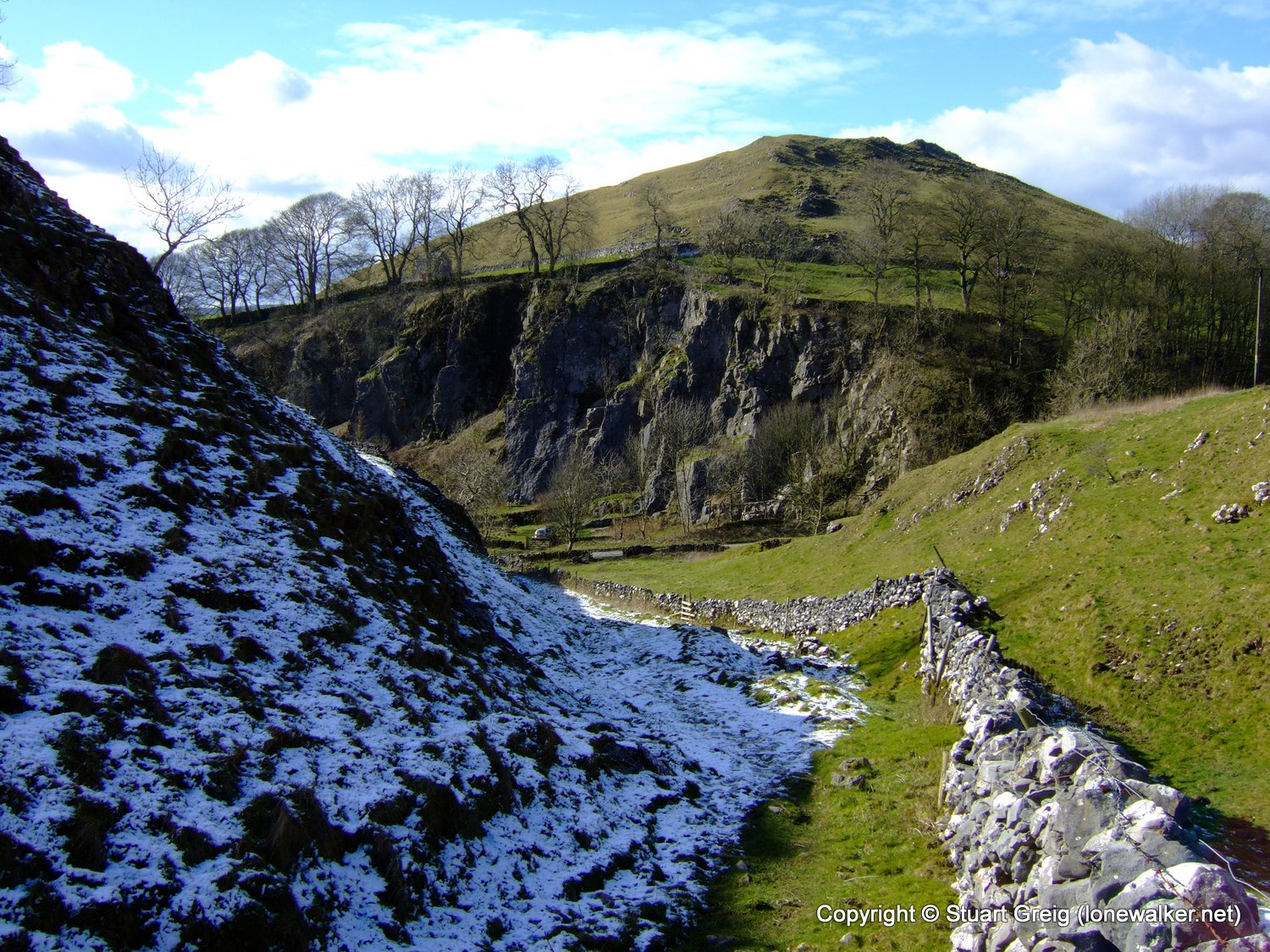 The foot of High Wheeldon. Lovely and warm in the sunshine down here, it was bitterly cold on the top of the hill. The rock wall ahead was being scaled by two climbers – they didn’t seem to appreciate me telling them there was a much easier footpath to the top, just round the side of the hill.