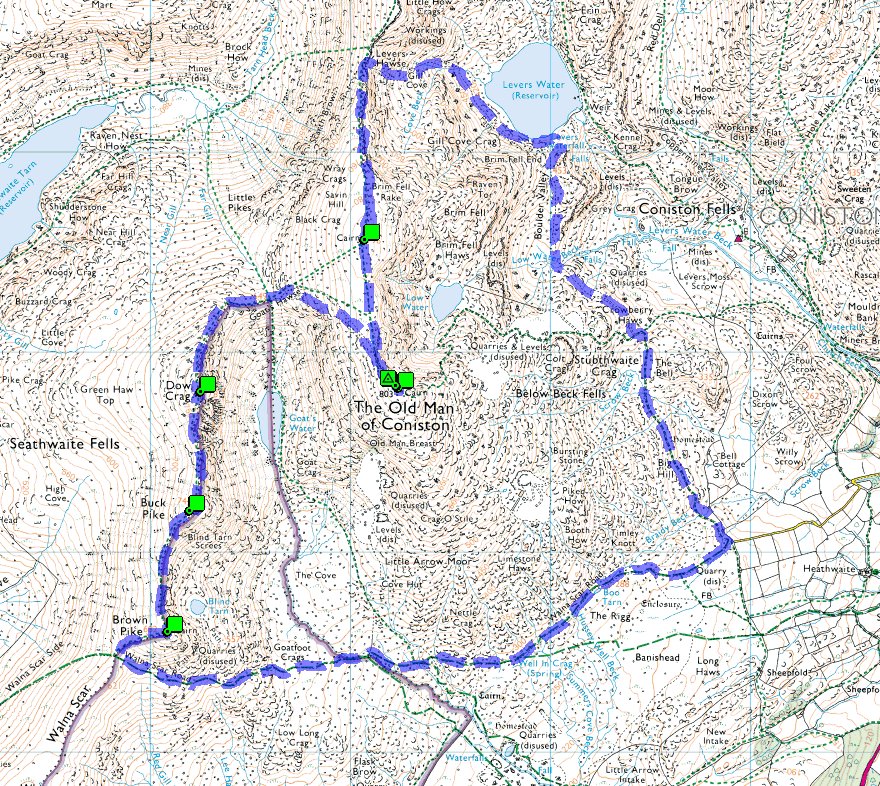 I set out early, very early, from home and I was walking before 07:30 on this cold December morning, only 6 days from the winter solstice. My intention was a clear summit at the Old Man for some photos without the usual compliment of grockles. This did mean that for the first hour or so I was walking in complete darkness. I used my head torch to avoid the pot holes along the road.

I passed two or three wild campers – whom I admire for their determination. It was bitterly cold, even at this altitude.

Path up to Brown Pike – still quite dark and walking up into the cloud layer now.

I’ve never seen frosting like this before. Each blade of grass had about half an inch of frost attached to it, built up I guess over a period of days. It turned the grass covered verges of the path into a wonderland.

The rocks on the path seemed to have developed their own layer of frost or ice possibly, which was invisible to the eye, but made the rock very slippery. Initially I thought it was a problem with my boots, slipping on rocks, but when I touched them I could feel the thin layer of ice – quite odd.

Summit shelter on Brown Pike – things are starting to get a little cold and frosty now.

Once into the cloud layer the cold gripped even tighter, I was glad of the four top layers I had worn today and the two bottom layers were doing their job as well. I was not exactly toastie, but I wasn’t cold yet either. The wind was beginning to pick up as I gained altitude, but as long as I kept walking I was okay.

The only view of the whole day. Wether How I think, seen through a break in the clouds as the wind ripped them apart for a few seconds

Weather worsens on the approach to Coniston Old Man.

The wind was now whipping around quite quickly and the wind chill was biting into my face. I’d already donned my hat and gloves at the foot of the first climb, but I now added my neck gaiter to help reduce the wind chill effect on my face. This is essentially a tube of thermal material that you slide over your head and wear around your neck like a close fitting scarf. It works wonderfully well 🙂

The summit of the Old Man was completely deserted, no-one else was around, which is probably quite a rare experience. It was 09:30, but the weather was foul enough to keep the tourist walkers in the villages and it may have been too early for the serious walkers. Either way I enjoyed the solitude on the summit for a few minutes, feeling my body temperature fall all the while, before picking up my pack and hurrying onwards.

Even I was frosty all over by now. My legs were white where the frost clung to them, looking just like my pack. I have no idea what the wind chill had forced the temperature down to, but I guess it must have been close to -15 degrees. I don’t think I’ve walked in colder conditions.

The huge cairn on Brim Fell. Not really a summit, more of a plateau.

My intention had been to continue along the ridge to Swirl How and then along the Prison Band to Wetherlam and then return to Swirl Hause and take the path beside Levers Water back to the car. The weather seemed to have different ideas though and the wind was fierce by the time I reached the only real escape route on this ridge line; Levers Hause. I had the option of another 60 to 80 minutes walking if I returned by Levers Hause, or an additional 2 hours on top of that if I continued with my original plan.

It was too cold for me and too windy and the willpower was weak under those battering forces. I struck off down the steep path towards Levers Water.

The path down from Levers Hause is steep – very steep in places, and the rocks were all little death traps. Every one seemed to be smooth and covered in the invisible ice. I abandoned the path and took to the grass either side, making much safer progress than would otherwise have been the case.

I met the first walkers of the day, coming up the path towards me. I warned them about the slippery rocks and the weat
her they would expect at the top. But this is well off the tourist track and these walkers seemed to be well prepared.

Looking back up Levers Hawse from the path beside Levers Water

Boulder Valley with Brim Fell behind

Kennel Crag (right), with Wetherlam behind covered in cloud

The tourist path up to Coniston Old Man – complete with tourists.

The walk ended in something approaching warm sunshine. Cloud still covered the big hills in the Coniston range, but the lower fells closer to the village seemed to be bathed in a rich winter glow. A fine end to the walk.