Another grim and grey weekend of weather had been predicted and Tex and I decided to try for a lower level walk to try and avoid the worst of the rain and low cloud. We selected the Peak District and then I chose a route I’d walked a couple of years ago around Dovestone Reservoir. This is a classic Peak District edges and ledges walk, with some fine rock structures, pinnacles and views down into the valleys. 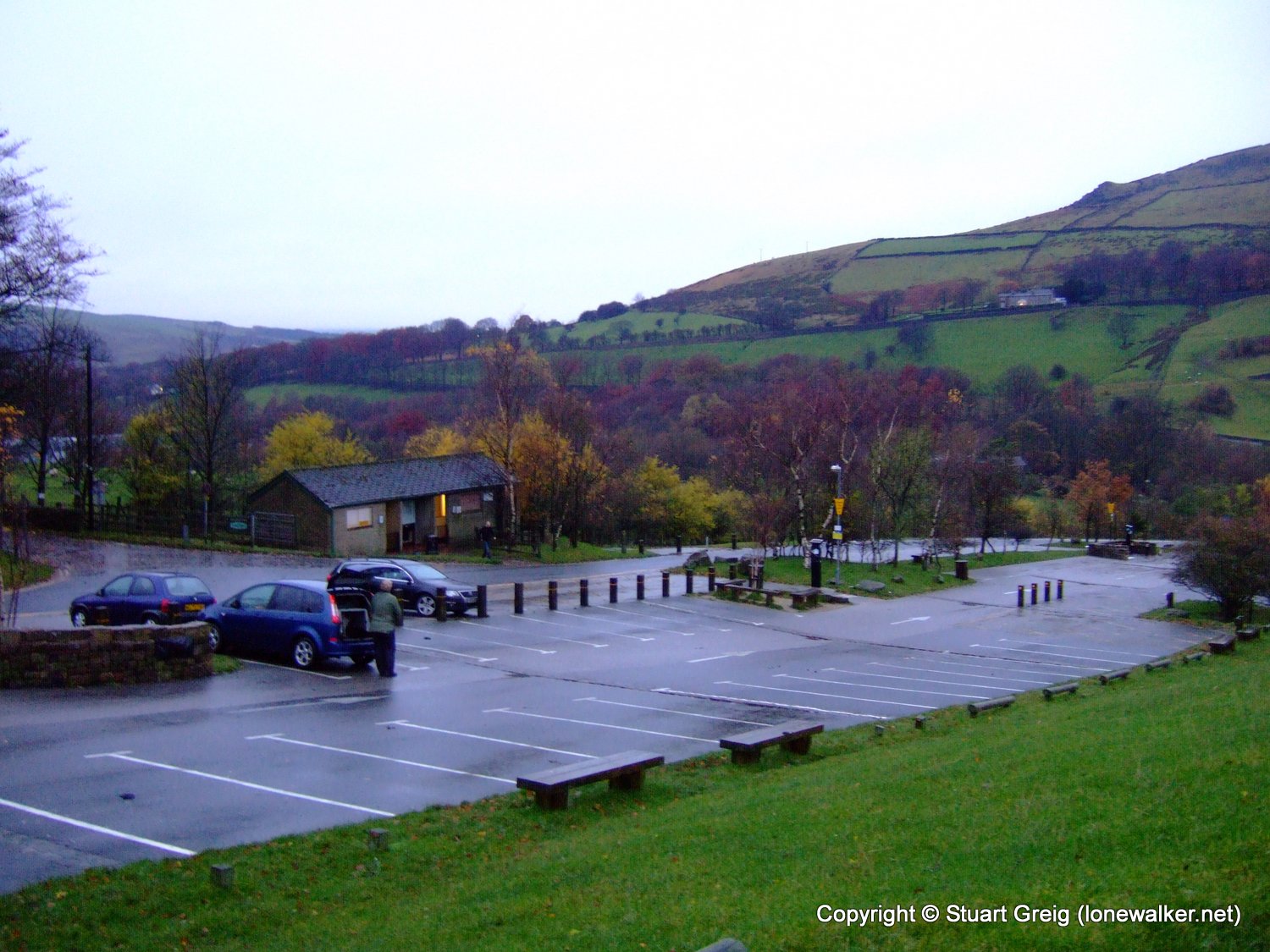 We arrived early, just as twilight was becoming full light (or at least as full as it was going to become today) and set out along the edge of the largest of the four reservoirs we would be meeting today. Three of these are in the valley at the start of the walk; the large Dovestone Reservoir, the smaller Yeoman Hey Resr and the smallest, Greenfield Resr. The fourth and final one is Chew Resr perched a 1000 feet higher on Featherbed Moss. 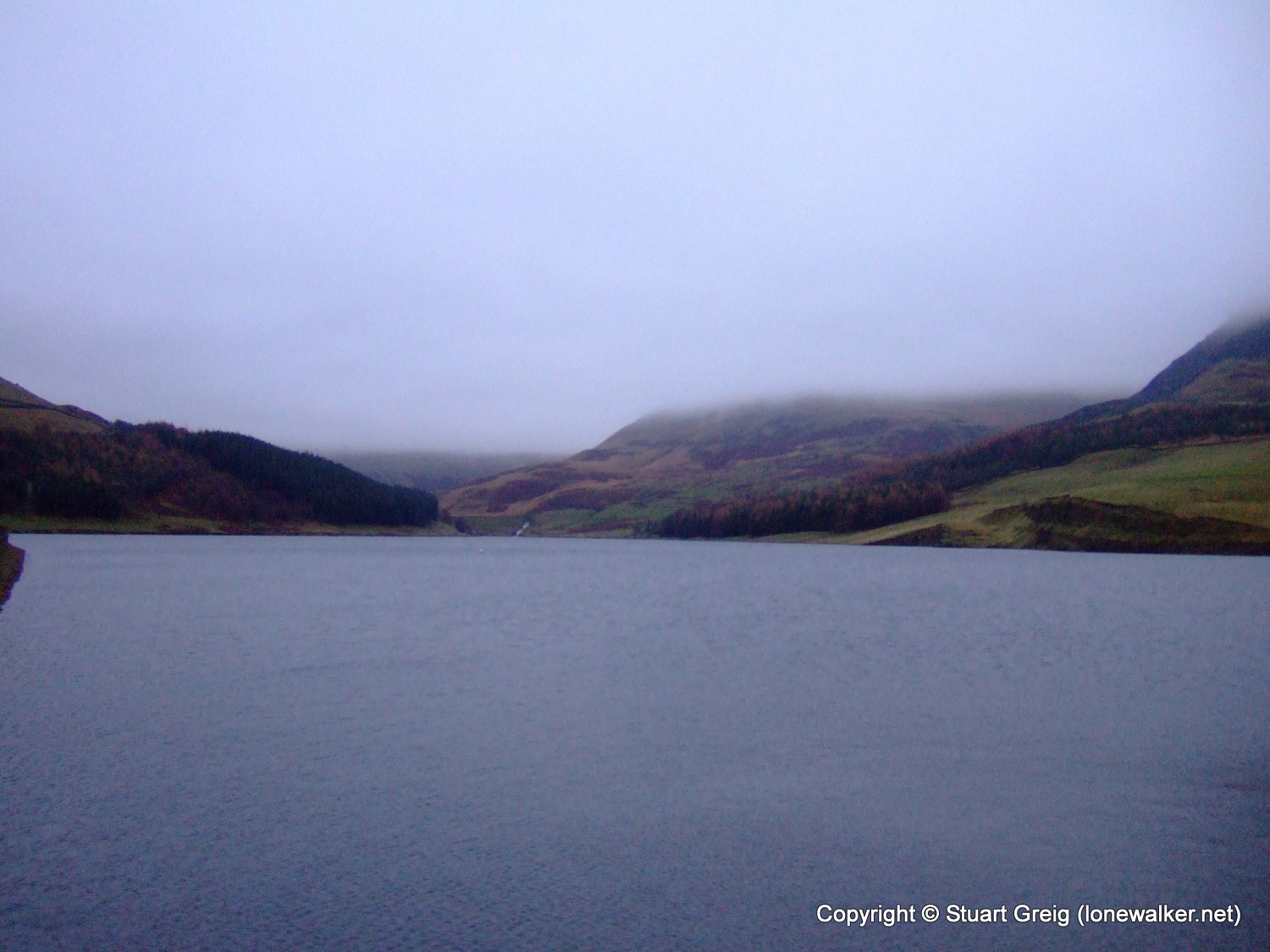 Dovestone Reservoir, looking ahead towards our hills 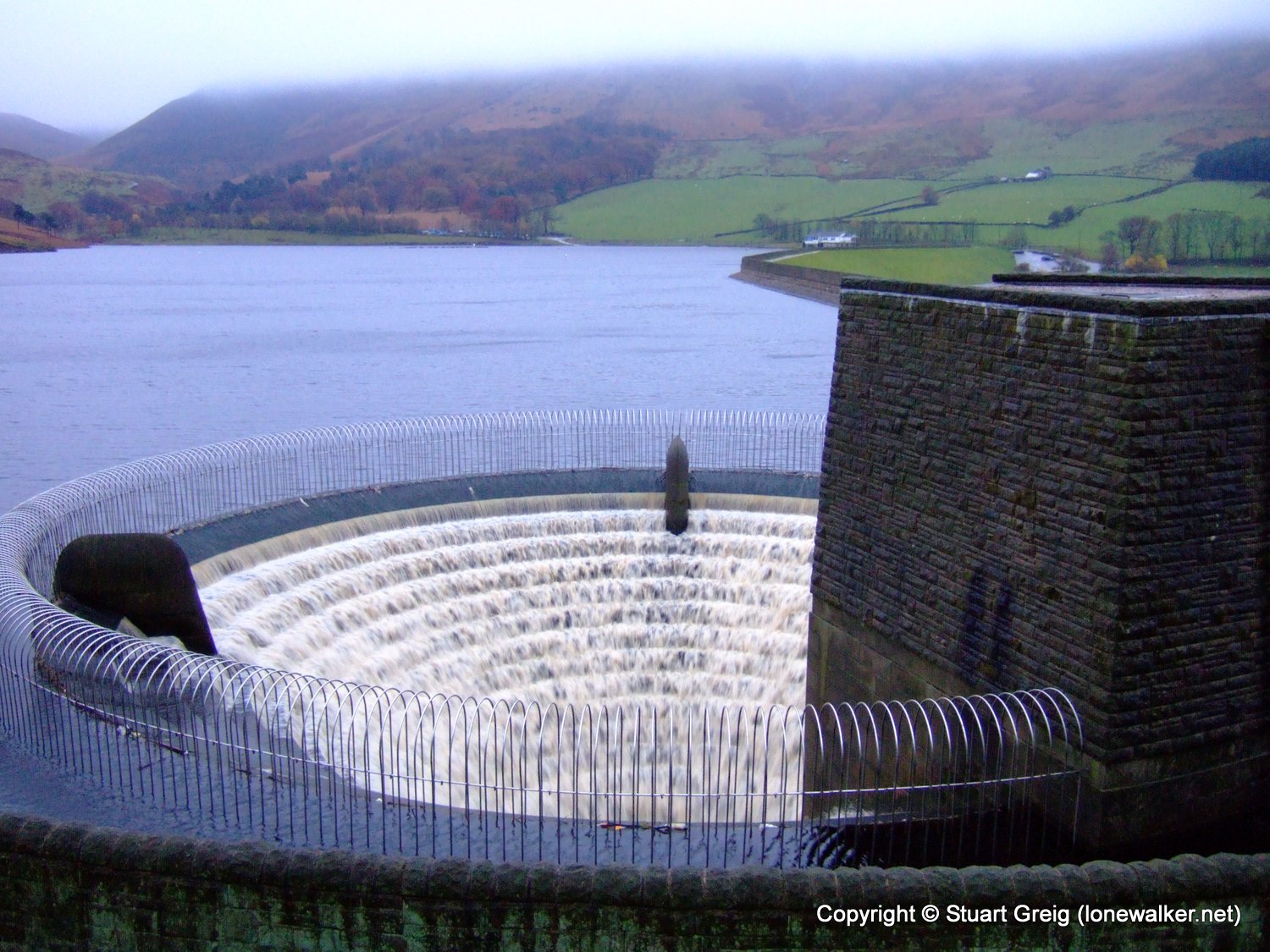 The spectacular overflow at Dovestone reservoir

I wasn’t too concerned about the amount of water flowing into the overflow, after all that’s what it was for. The rain was fitful at this time, it started down hard enough to force us into waterproofs, but then stopped and I soon became too hot, so stripped off my coat, but left my overtrousers on. It stayed like this for the rest of the walk – never quite raining enough or stopping long enough to allow us to make one decision or the other.

Tex was rightly chuffed at his new Berghaus jacket – a huge improvement on his previous North Face Paclite jacket which left him sweaty and wet. My own Berghaus Paclite is beginning to feel the same – it doesn’t keep me dry in torrential downpours anymore and when I work hard in it, I end up with a wet jacket inside. 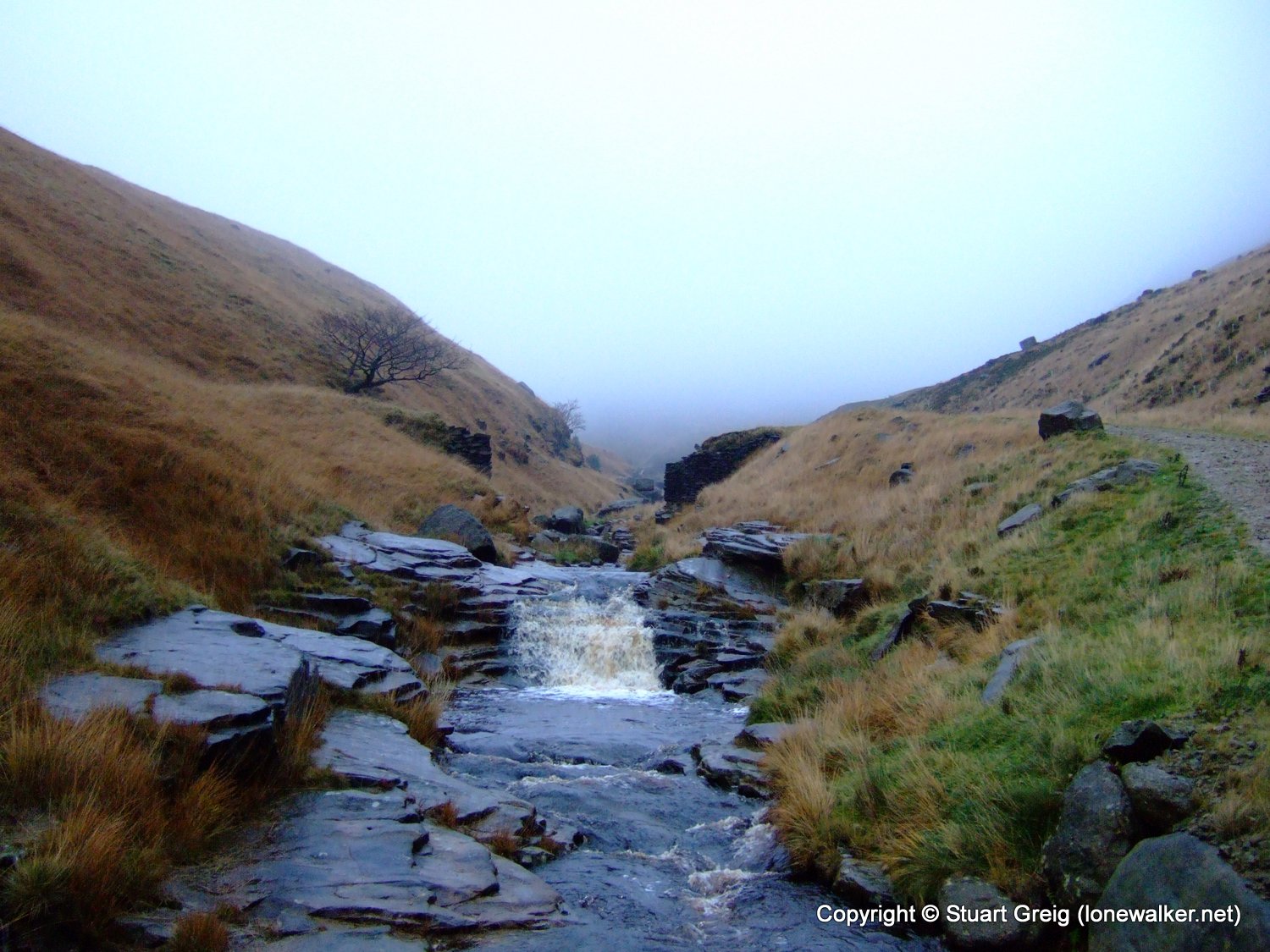 As we climbed gently up past the reservoirs the cloud became thicker and wetter and the river beside the path became wider, faster and more impressive. 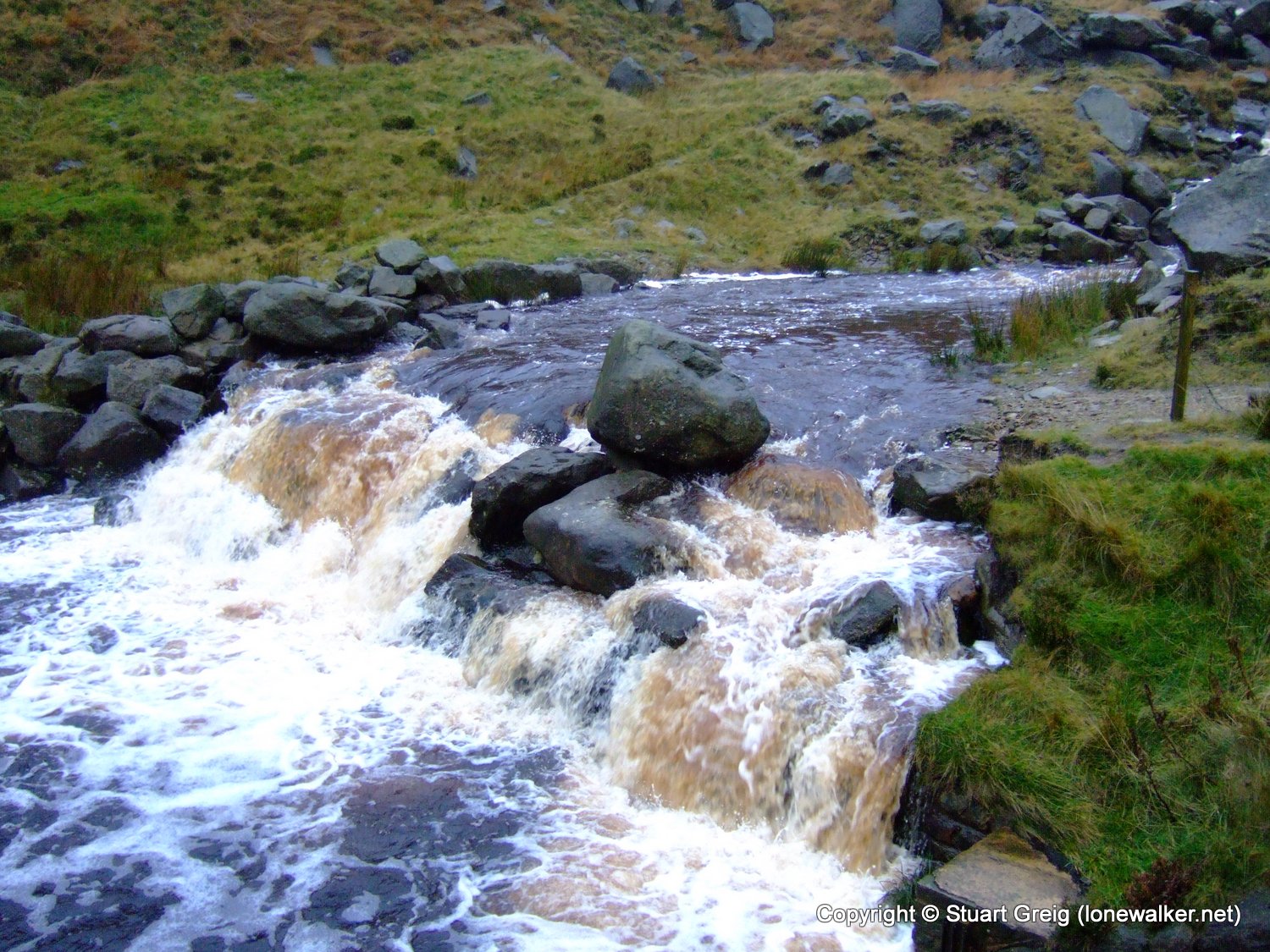 We soon arrived at the point where the rivers from Birchen Clough and Holme Clough join to form Greenfield Brook. It was here that we began to get a better idea of just how much water was in the system, running off the hills and moors that had had so much rain in the past few days. Our path was to take us up Birchen Clough a few dozen yards where we would then have to cross the river to avoid an impassable waterfall, before crossing back to the south bank higher up and heading off across the moor. 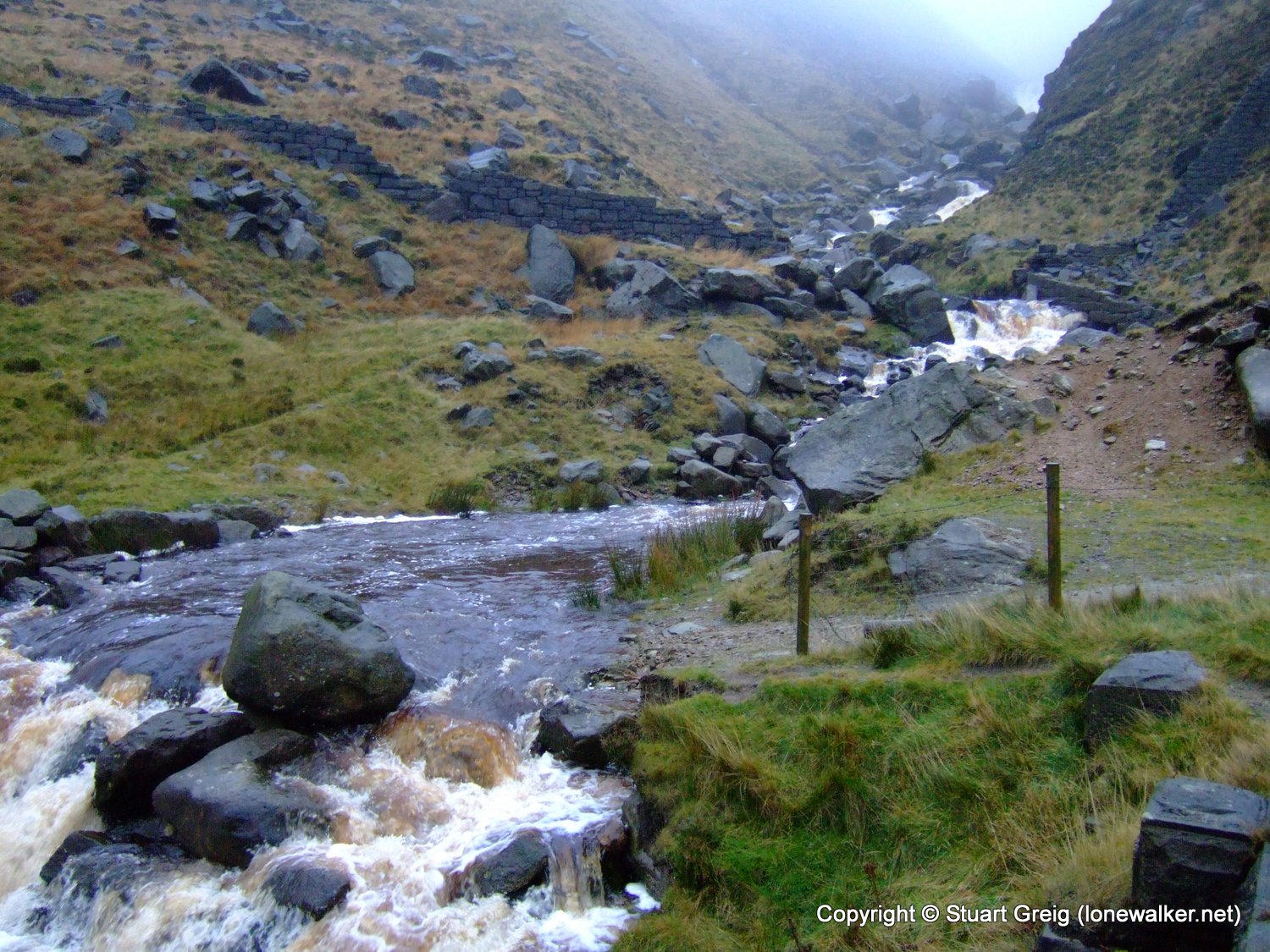 we made our way carefully up Birchen Clough, looking for somewhere to cross the raging torrent that was flowing down the Clough. All the rocks were wet and in one place part of the path had been washed away and we had to scramble around a rock jutting into the river. We were being extremely cautious. A slip or fall here and we would have little chance of preventing a nasty ride down the river. 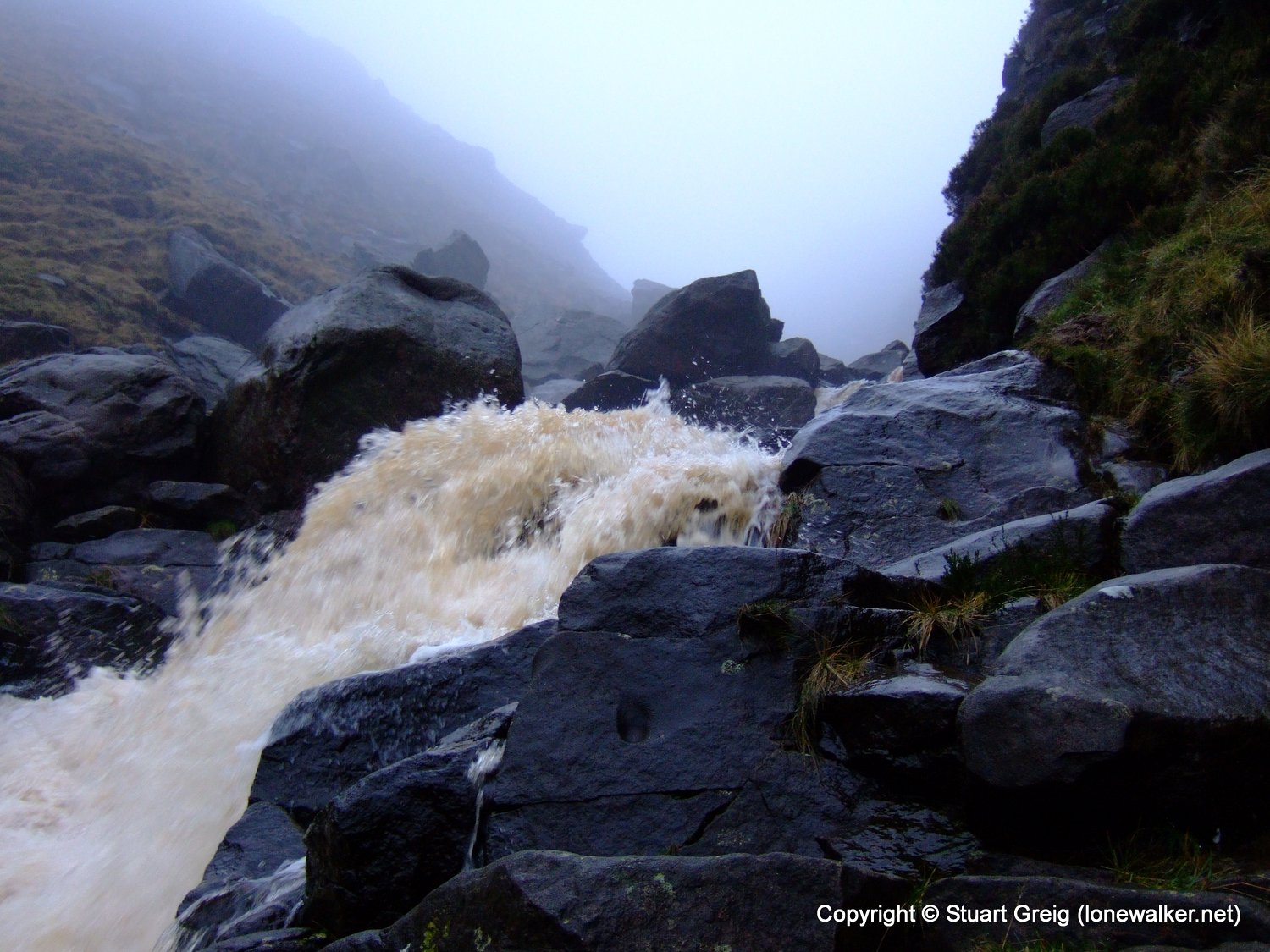 The waterfall in Birchen Clough

We eventually reached the waterfall, without having found anywhere reasonable to cross the river. There was no point at which we could step across the water. We retraced our steps a little way to see if we had missed a crossing. We would have to wade part of the fast flowing river if we were to cross here and neither of us fancied that very much. We headed back to the weir. The journey back was very slow and much more difficult that the journey up the Clough. The rocks were wet and I negotiated the worst of the scramble on my arse, getting quite wet into the bargain, but we made it back to the junction in one piece.

Another pair of walkers arrived at this point and they watched us complete the tricky scramble back to the weir. They said nothing, but turned around and headed back down the path to the reservoirs. 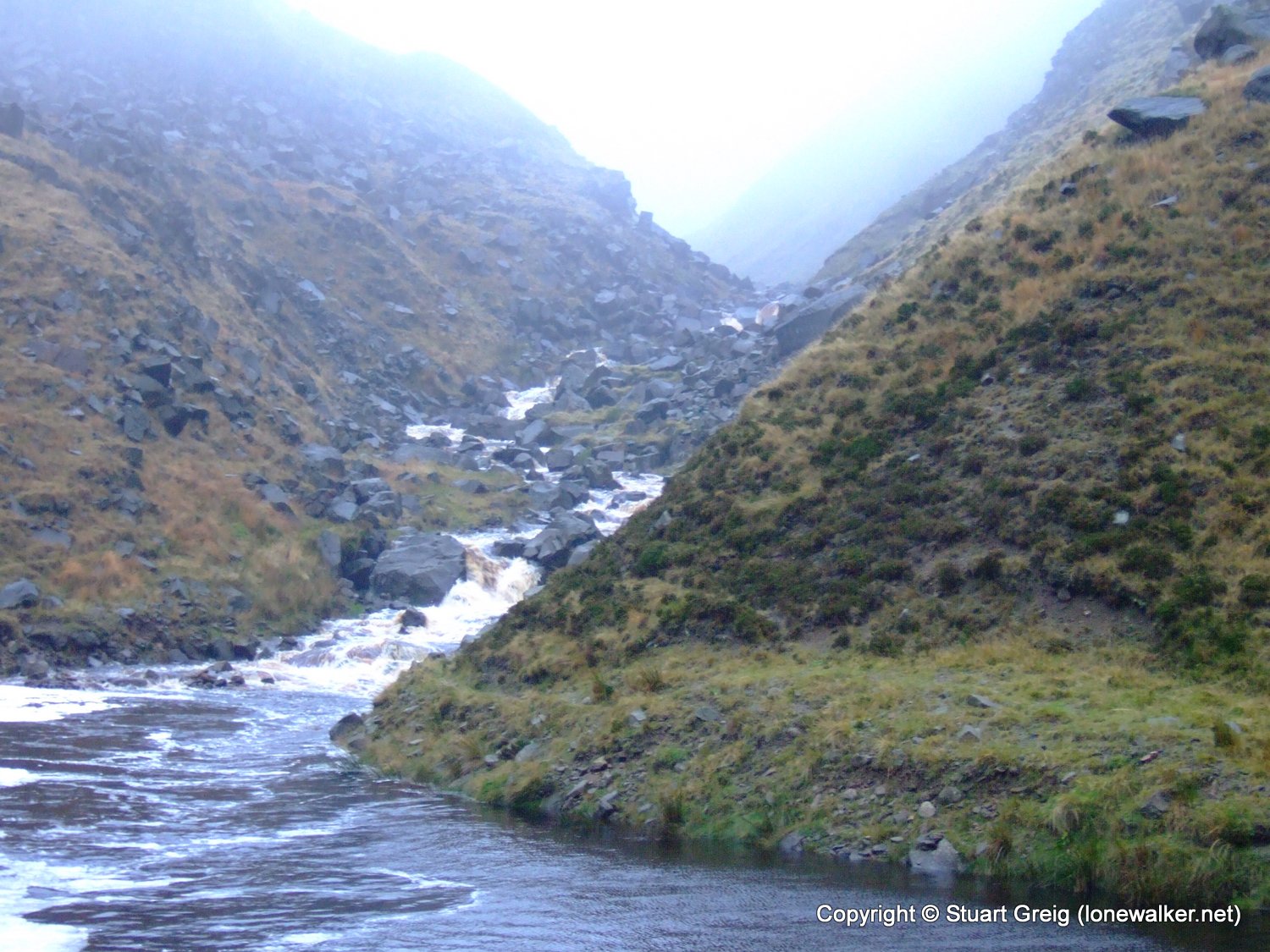 The view up the river in Holme Clough

Rather than abandon the walk so quickly, we decided to see if we could make a crossing up Holme Clough and then climb the little hill the separates the two Cloughs and make our way up Birchen Clough from there. In order to cross Holme Clough though, we needed to cross Greenfield Brook first. I walked down stream a little way to find a stepping stone that wasn’t underwater, while Tex walked underneath a gushing overflow pipe and got completely drenched. 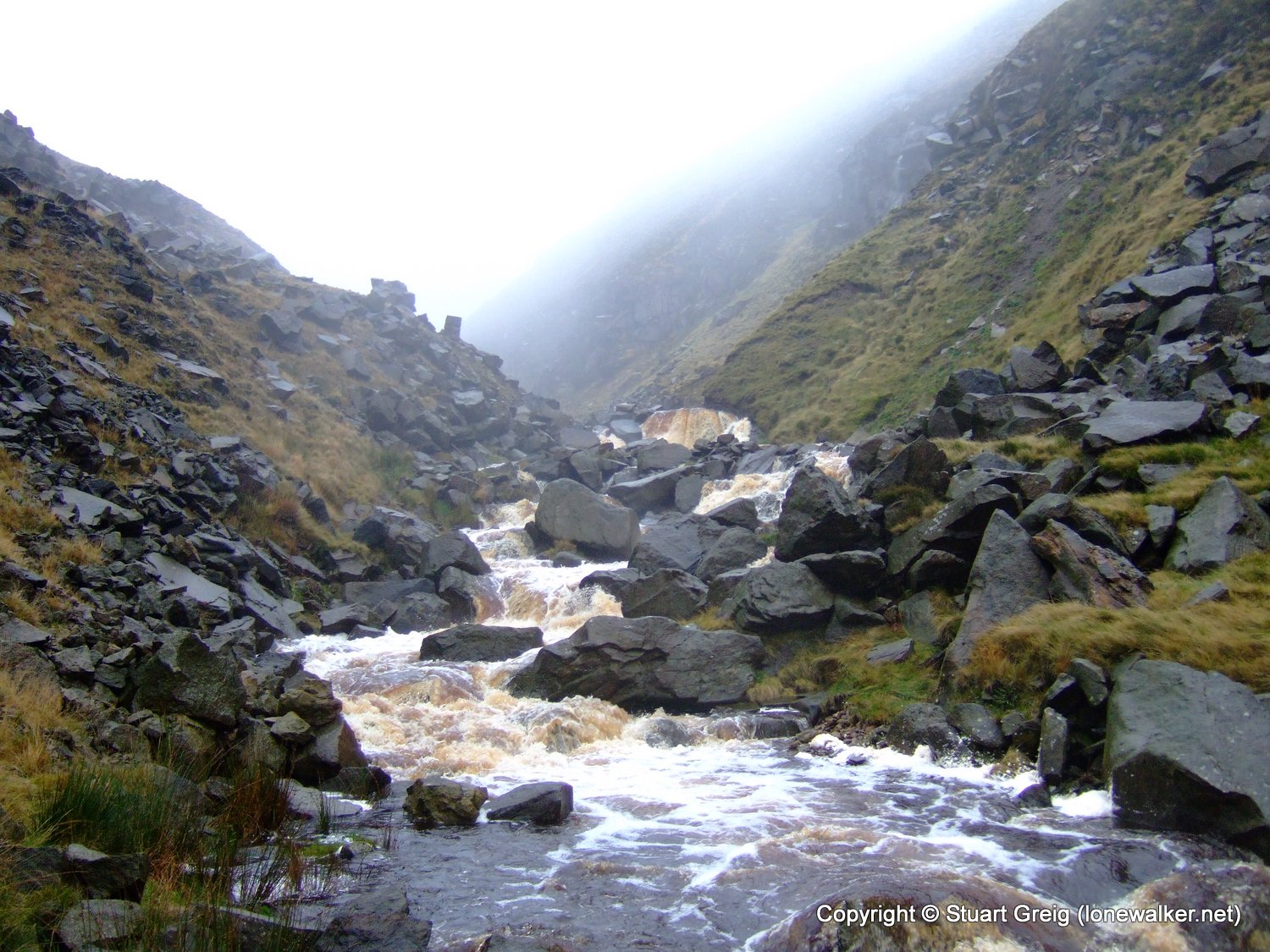 Holme Clough was no easier to cross than Birchen Clough had been though and although we walked several dozen yards up the river we found nowhere that was narrow enough for us to step across. We admitted defeat and decided to head back the way we had come.

We had been very lucky. I had almost decided to walk the route in reverse, which would have meant trying to cross this river at the end of the walk, instead of at the start. We would have been more tired and also reluctant to retrace miles of the walk to find another descent to the car. We would probably have made a bad decision and tried to force a crossing at some point of the river – potentially with dire consequences. 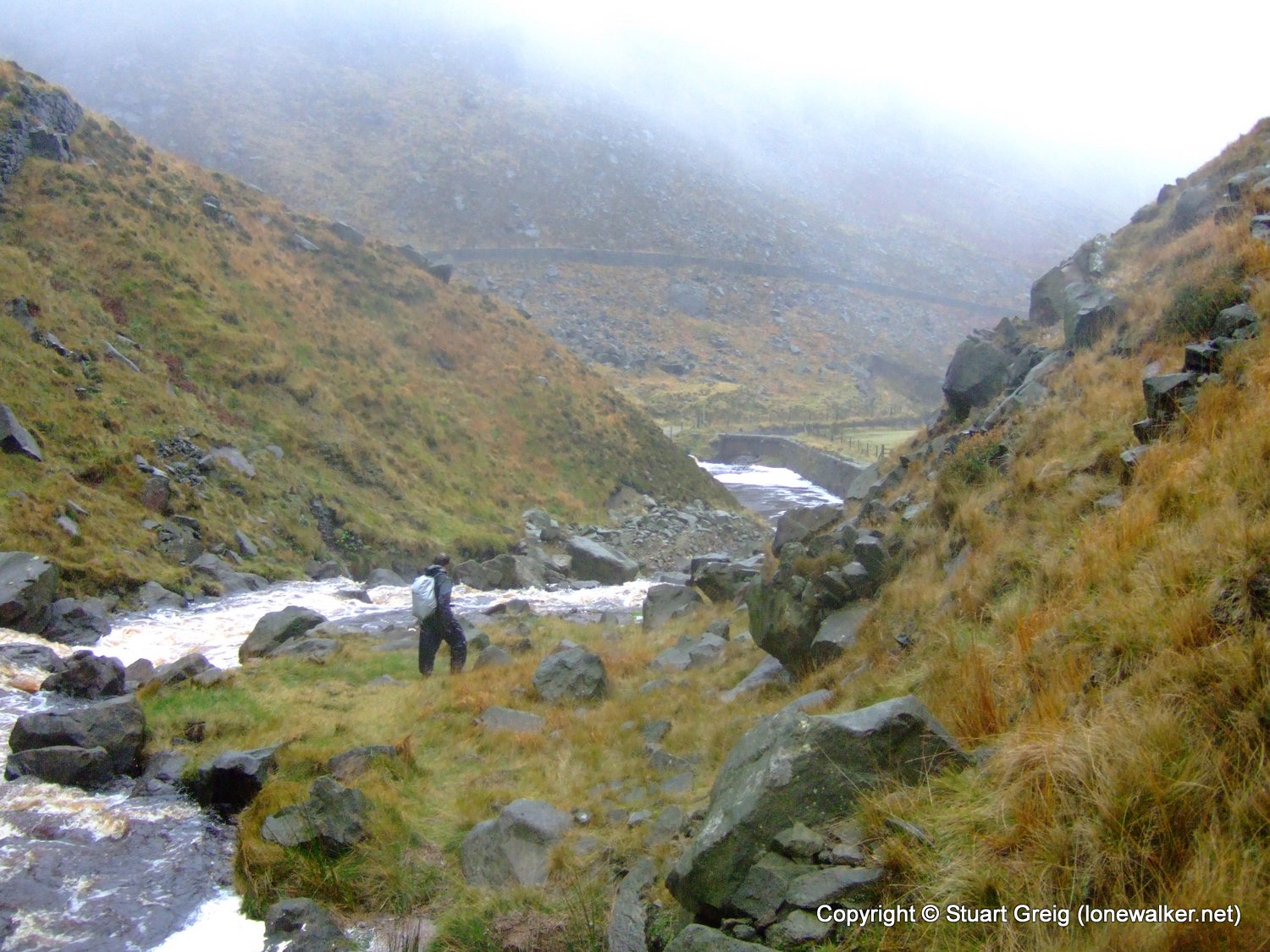 Heading back down Holme Clough to the weir

For part of the walk back we toyed with the idea of doing part of the walk in reverse
and using the Chew Resr road to return to the car, but we both decided that we were too wet and fed up to continue. We chose a slightly different return route – using a very muddy and slippery path around the east side of Yeoman Hey instead of the nice dry gravel path on the west side. 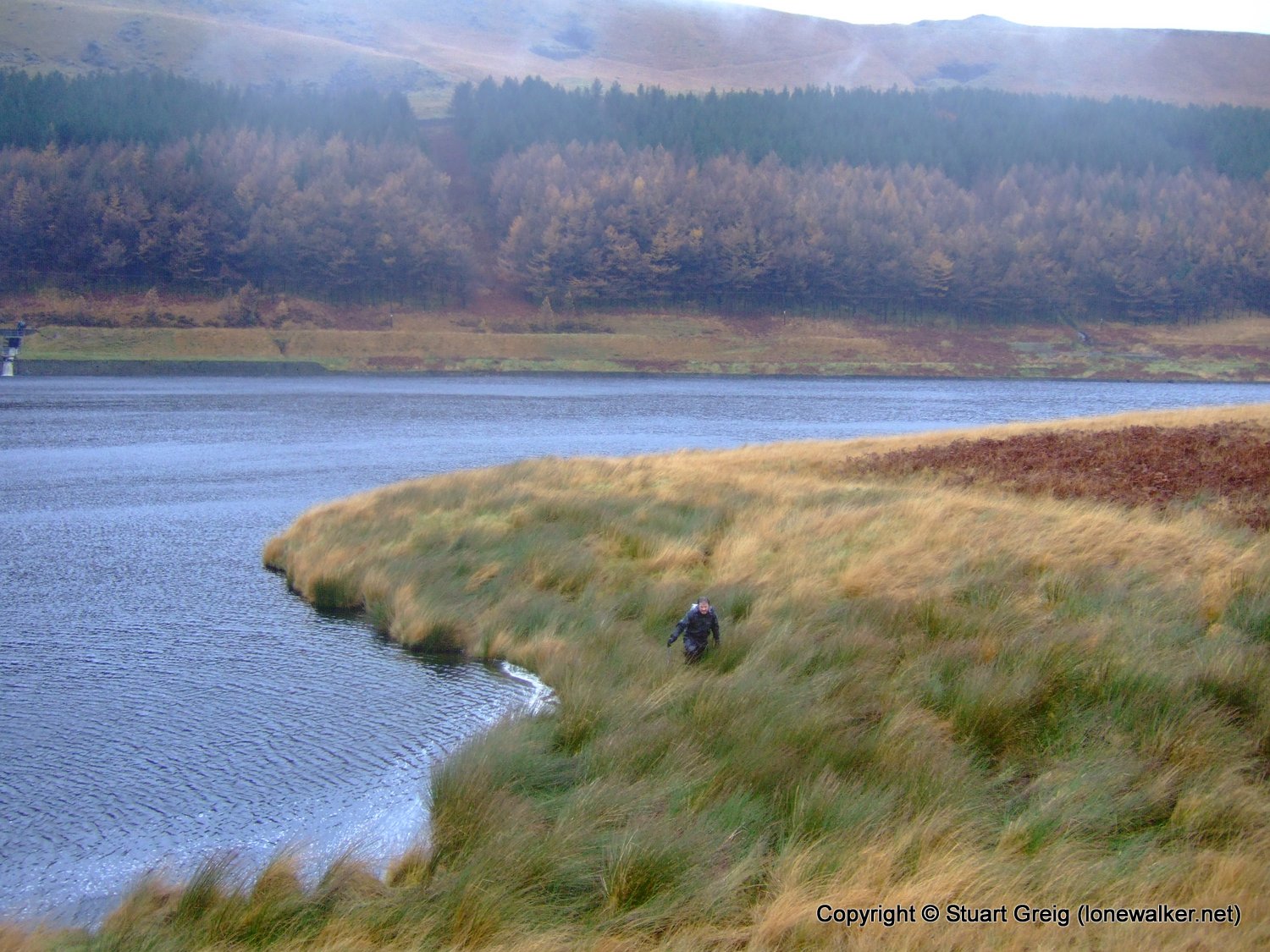 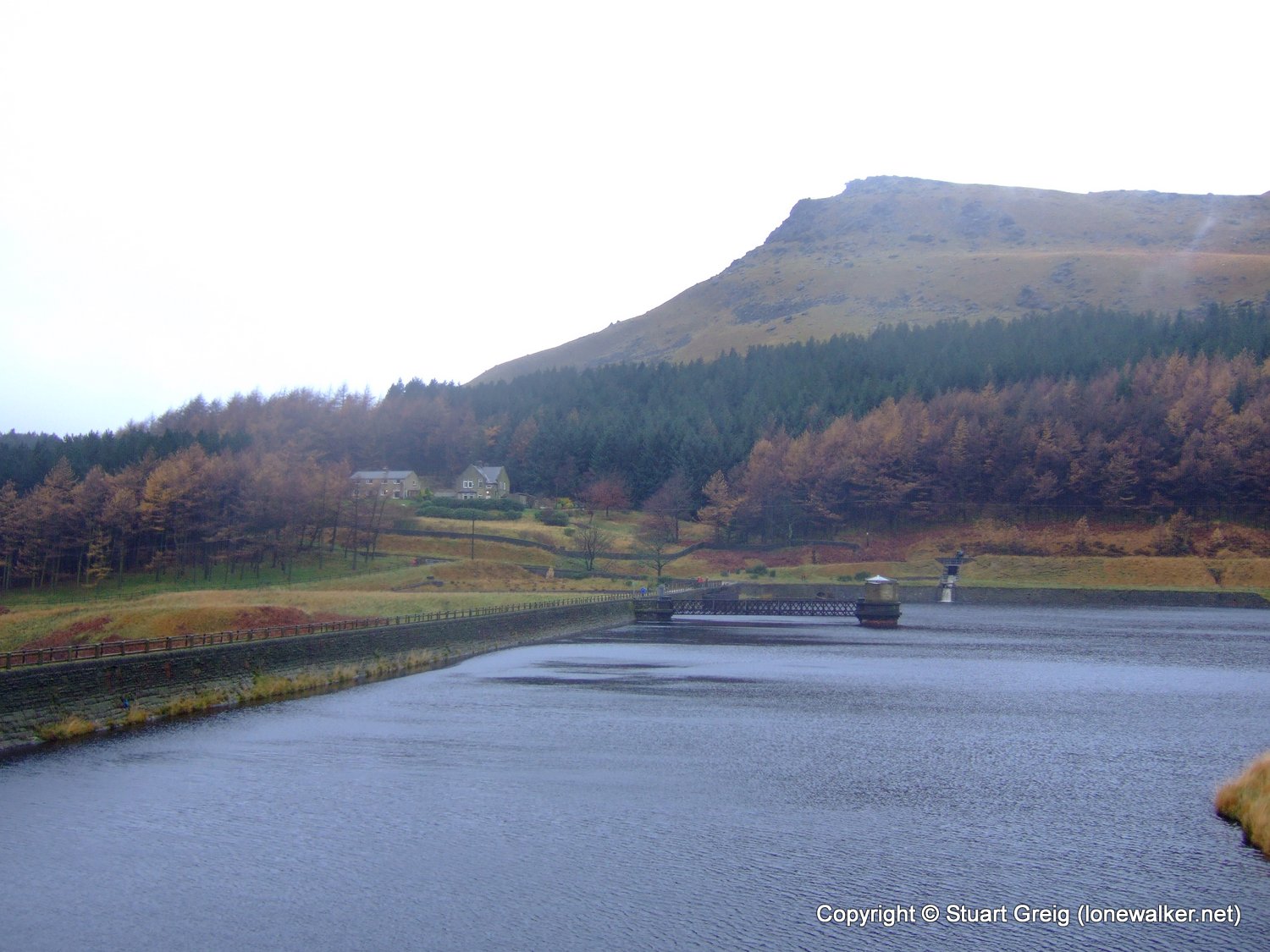 The dam between Yeoman Hey and Dovestone reservoirs 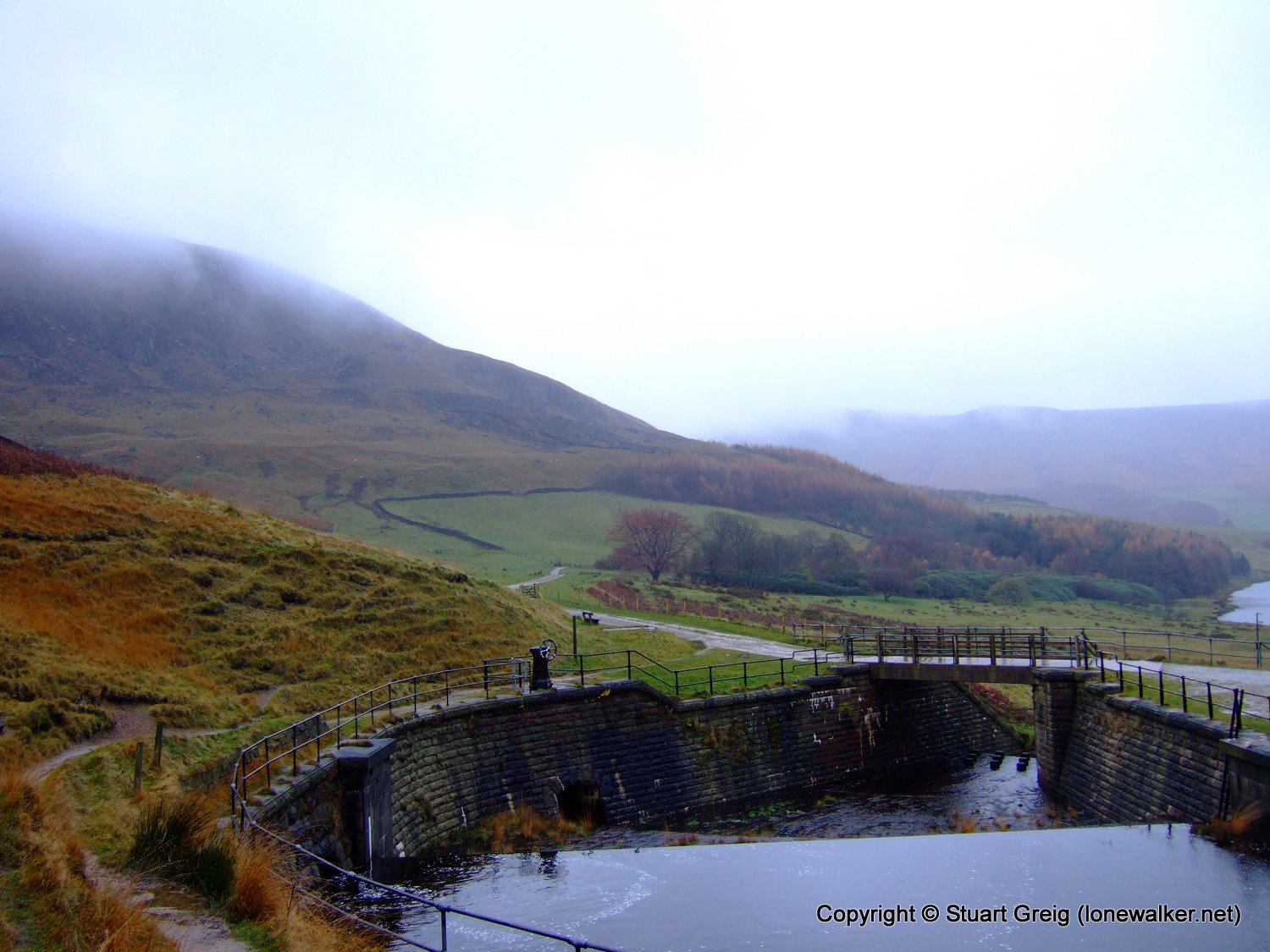 The weir at Yeoman Hey, clouds still hang on the hills behind

We arrived back at the car only a couple of hours after setting out. We were both a bit gutted, this was the first walk we’d called this year and only the second walk we’d ever called together.

Hopefully the short video below will give you an idea of how fast the water was running down the Clough and how dicey the crossing would have been if we’d tried to force it somewhere.

The river crossing in Birchen Clough