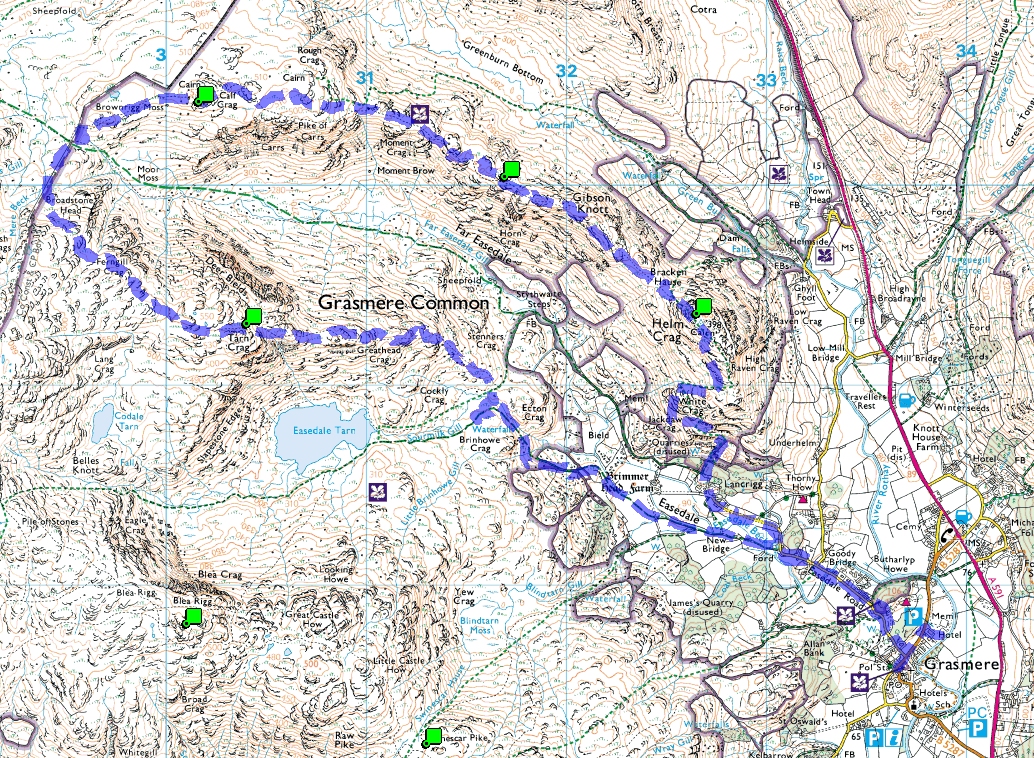 I was walking with Rob today, our first walk together in 2007. We set out early, hoping to avoid the worst of the traffic, both on the way into the Lakes and on the hills themselves. Walking behind a string of other people up a hill has always been completely anathema to me, so I was happy to get up at 5:30am to avoid it. Fortunately, as it turned out, it also meant we avoided the hottest part of the day – or at least we were almost back to the car at that time.

When you walk alone, you get used to walking at a certain pace and I must admit, it took me a few minutes to adapt to the slightly slower pace that Rob has always found comfortable. However, I had decided not to treat this as another training walk, I wasn’t carrying any of the usual water ballast with me, and I decided that a slower pace would make a nice change, a chance to appreciate the scenery more instead of concentrating on foot placement.

I don’t think there is any way to properly train for hill walking in the gym, its difficult to simulate the sort of activity you do walking up a hill, in a flat environment, even with the best gym equipment. The best training is to get out on the hill and push yourself up them. Rob had warned me he would be slow up the hills and he was right. Now I know he’ll probably read this at some point and I want to make it clear, mate, that I thoroughly enjoyed the day. Any downside of walking slowly was more than compensated by the company and the crack/craic 🙂 Its nice to walk with someone after spending so long walking alone. 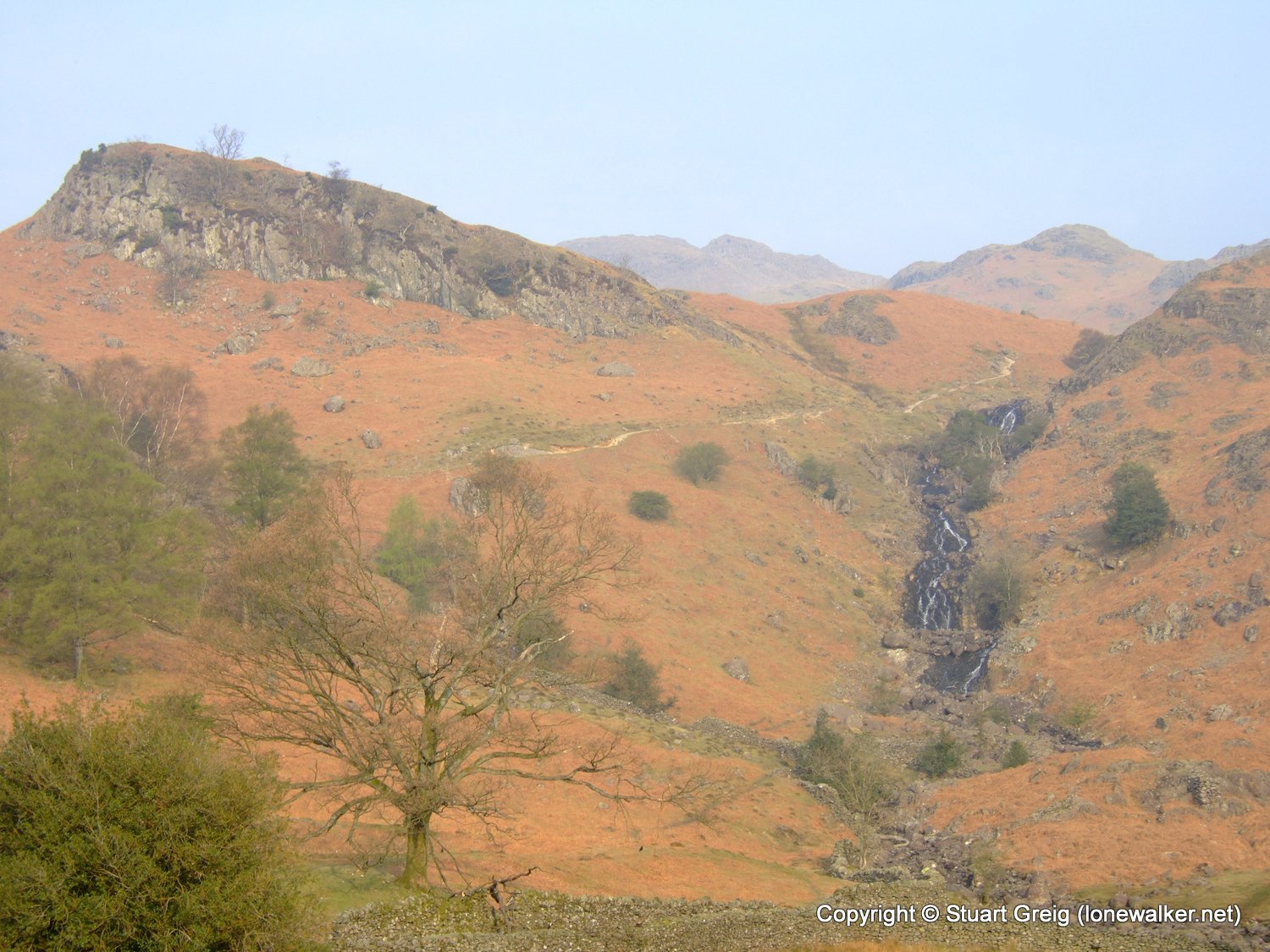 Our path running alongside the waterfalls of Sourmilk Gill 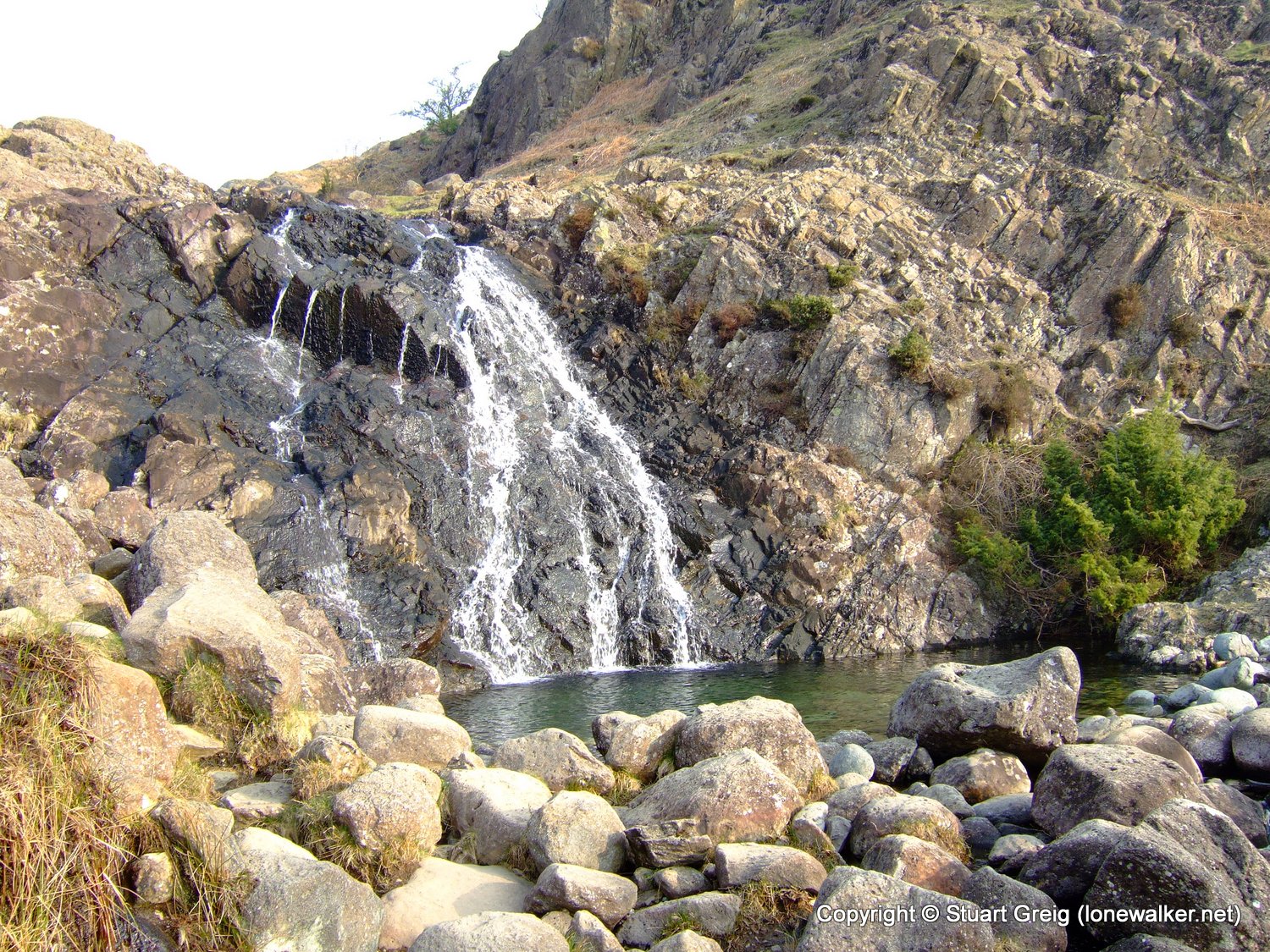 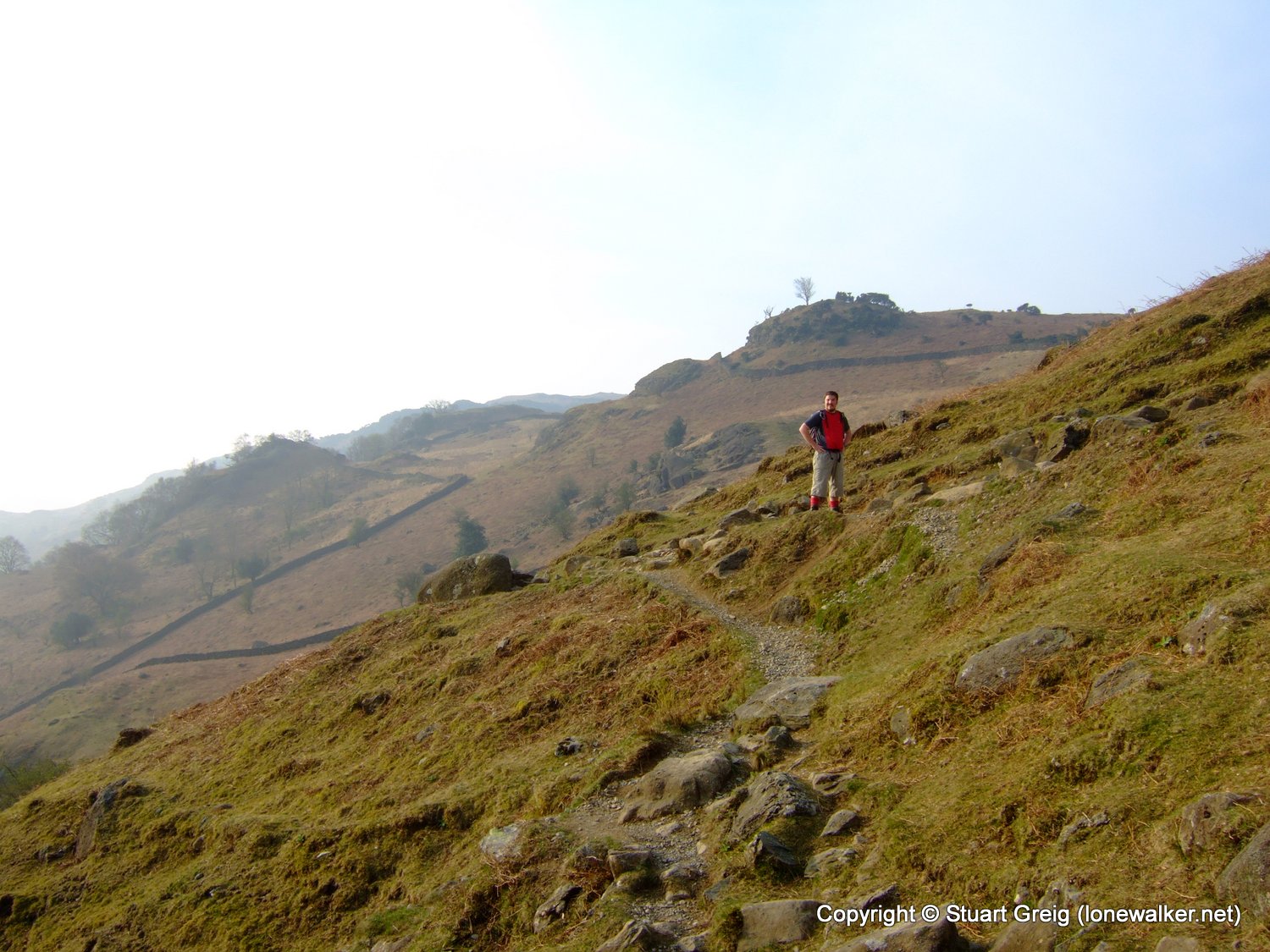 Rob on the path leading to Easdale Tarn 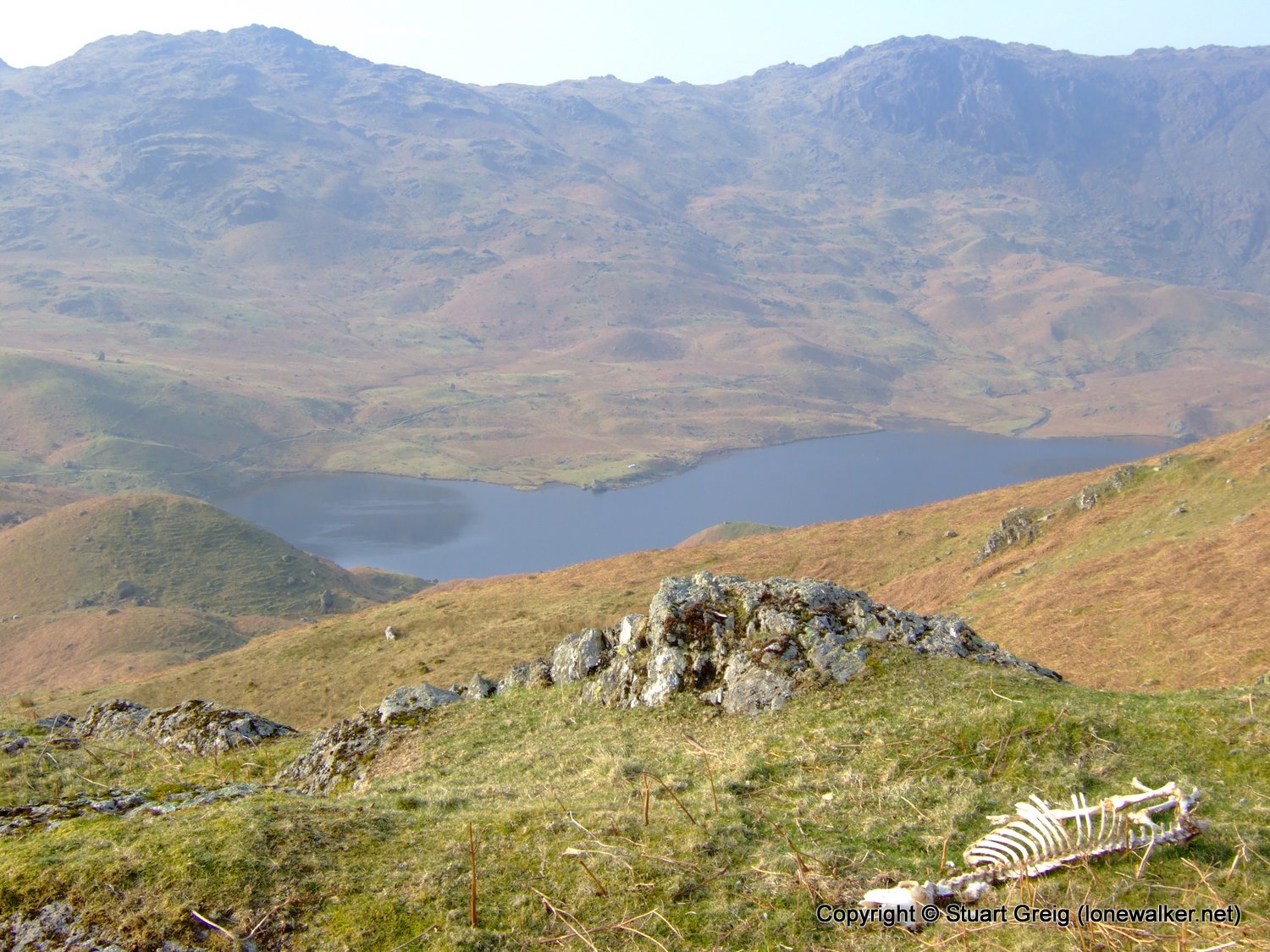 We stopped a couple of times on the path up to Tarn Crag, which has a fabulous view down onto Easdale Tarn and onto the Helm Crag ridge. Both views were today spoiled somewhat by the mist that hung in the air for most of the day. I didn’t get a decent long range photo all day really, although most of the short range one came out fine. At Tarn Crag I made the point of climbing to the top of both peaks although the one on the right is obviously the higher and its the one with a cairn. 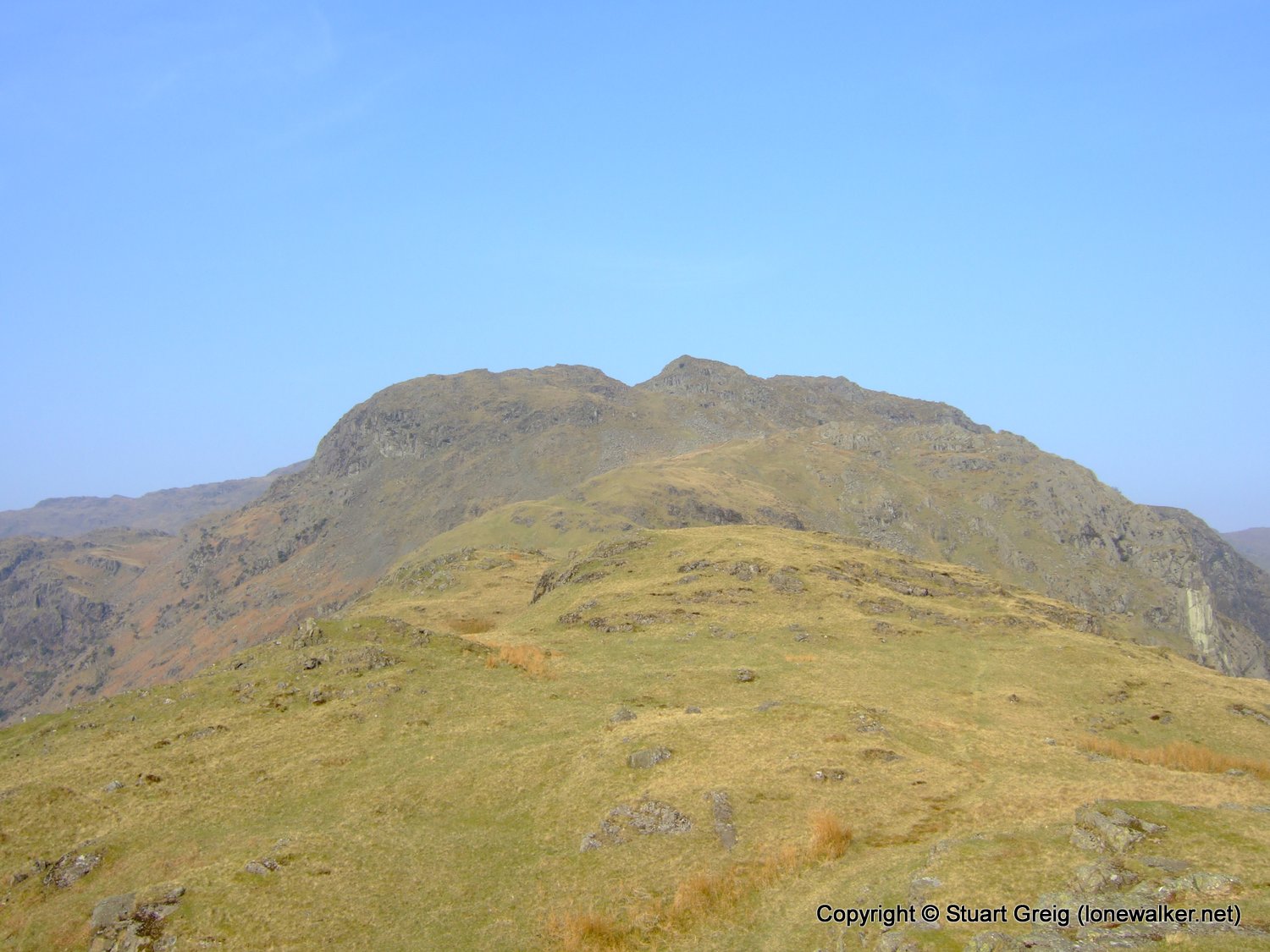 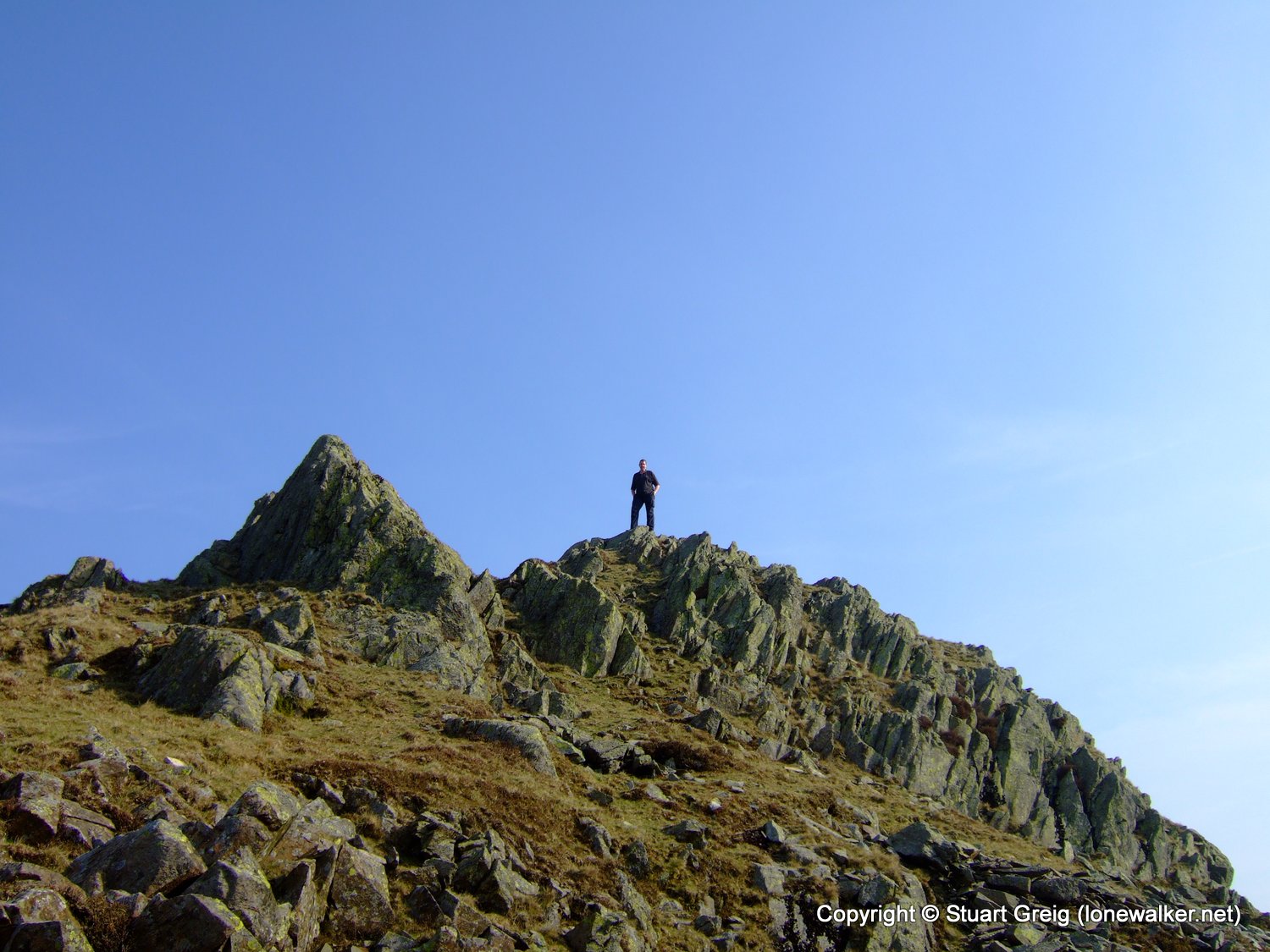 Me on the summit of Tarn Crag

By the time we reached the head of Far Easdale, it was clear we wouldn’t have time to make the “out and back” swing onto Steel Fell to bag that particular Wainwright, so we headed along the ridge over Calf Crag and along to Gibson Knott, the two Wainwrights on the ridge approaching Helm Crag. Until now we hadn’t seen anyone else on the hills, other than a couple of tents camped around Easdale tarn, but as we approached Gibson Knott we started to meet lots of walkers coming along the ridge towards us, having come up from Grasmere and past Helm Crag. 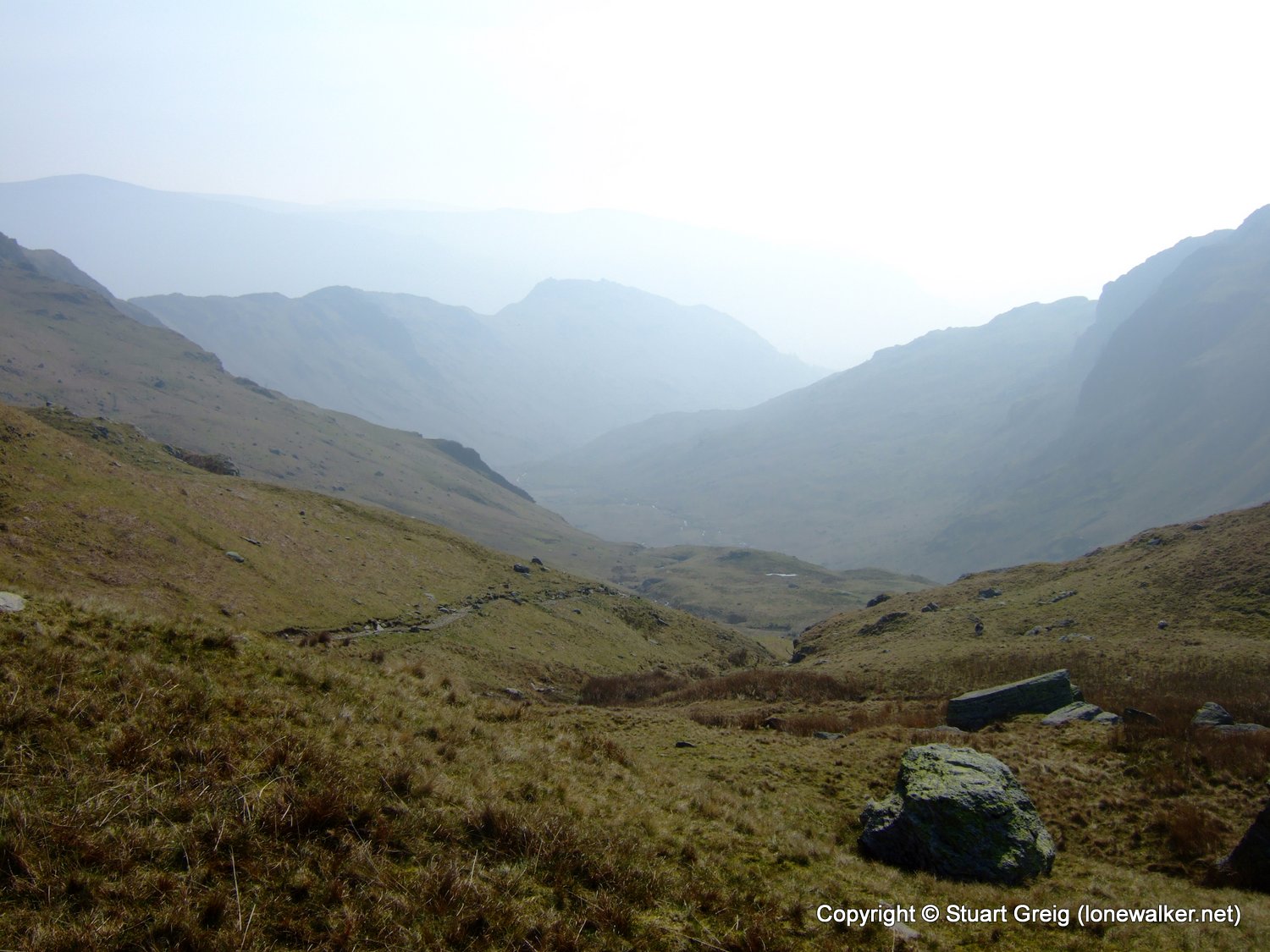 Looking down Easdale with Helm Crag just visible in the mist 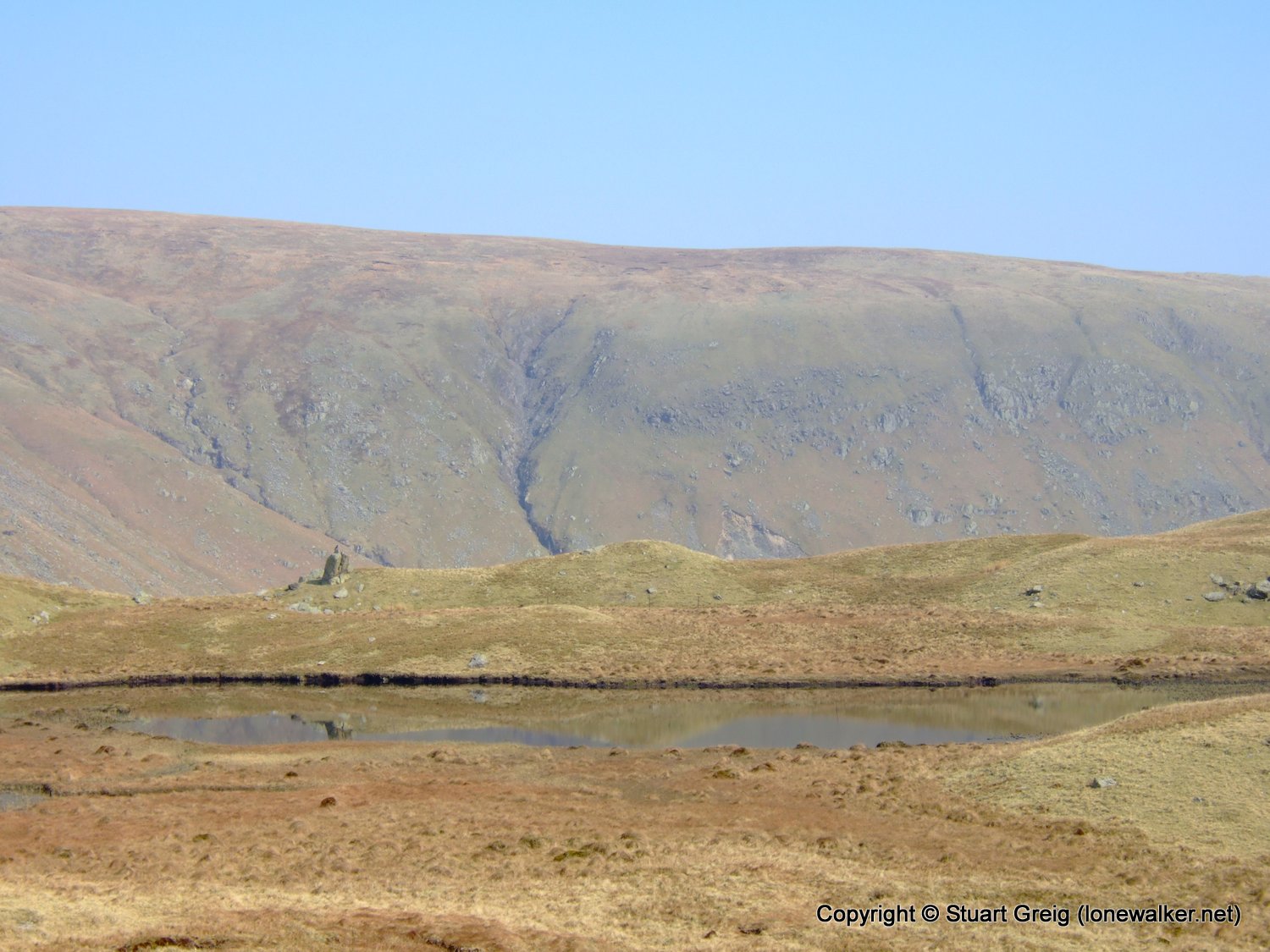 The temperature was by now well into the 20’s and I think I’d mentioned to Rob once or twice that I wished I’d worn my shorts as he had. I was also rueing the fact that I’d left my wide brimmed hat in the car too, along with my sunglasses – I was however well equipped if it decided to snow! I had my hat and gloves and waterproofs with me! Bloody typical!

Rob’s dog Dana was dunking herself in any sort of waterhole she could find – even those that were more mud than water – and a sorry state she looked, drawing much sympathy from most of the people that passed us. 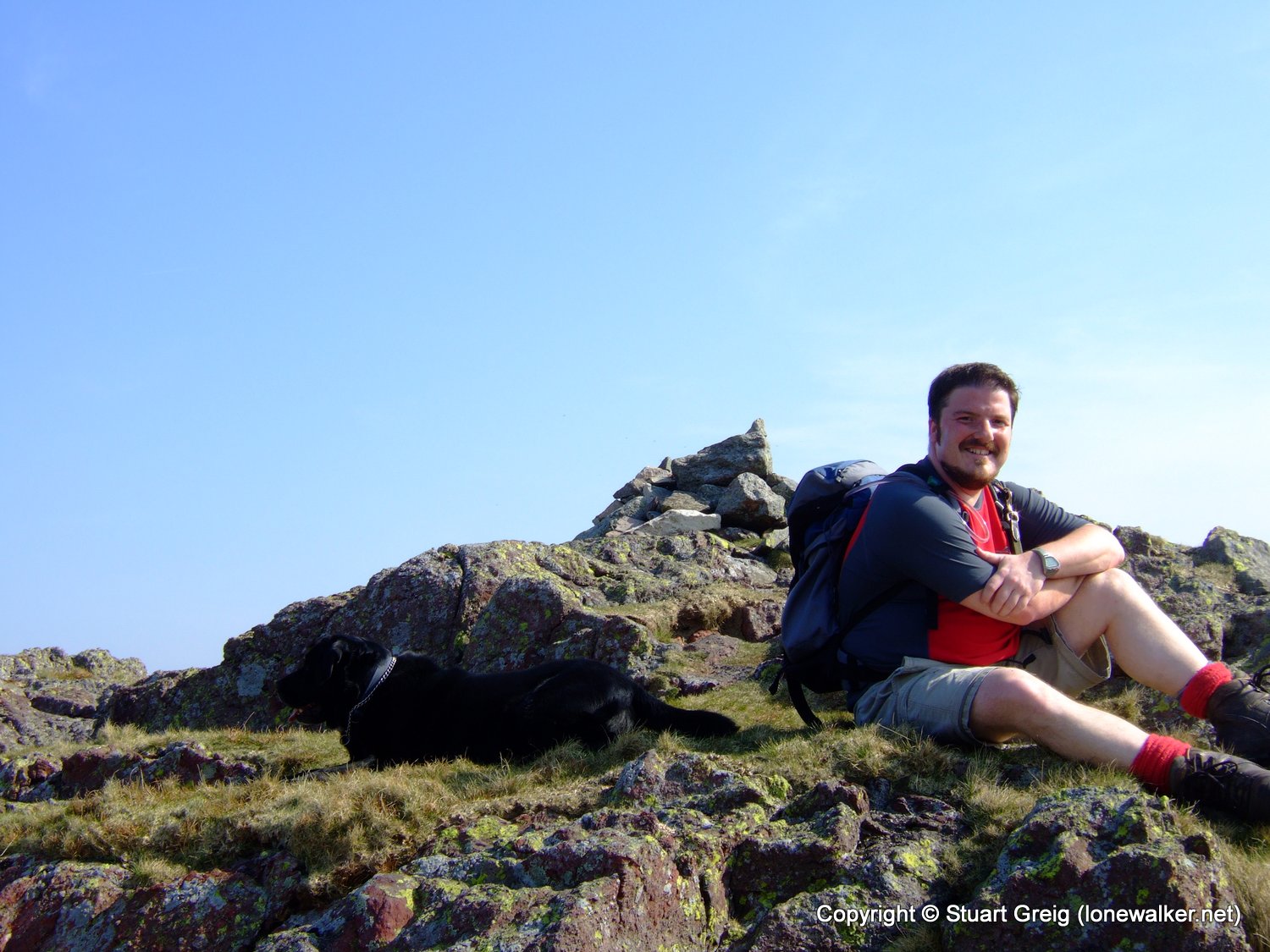 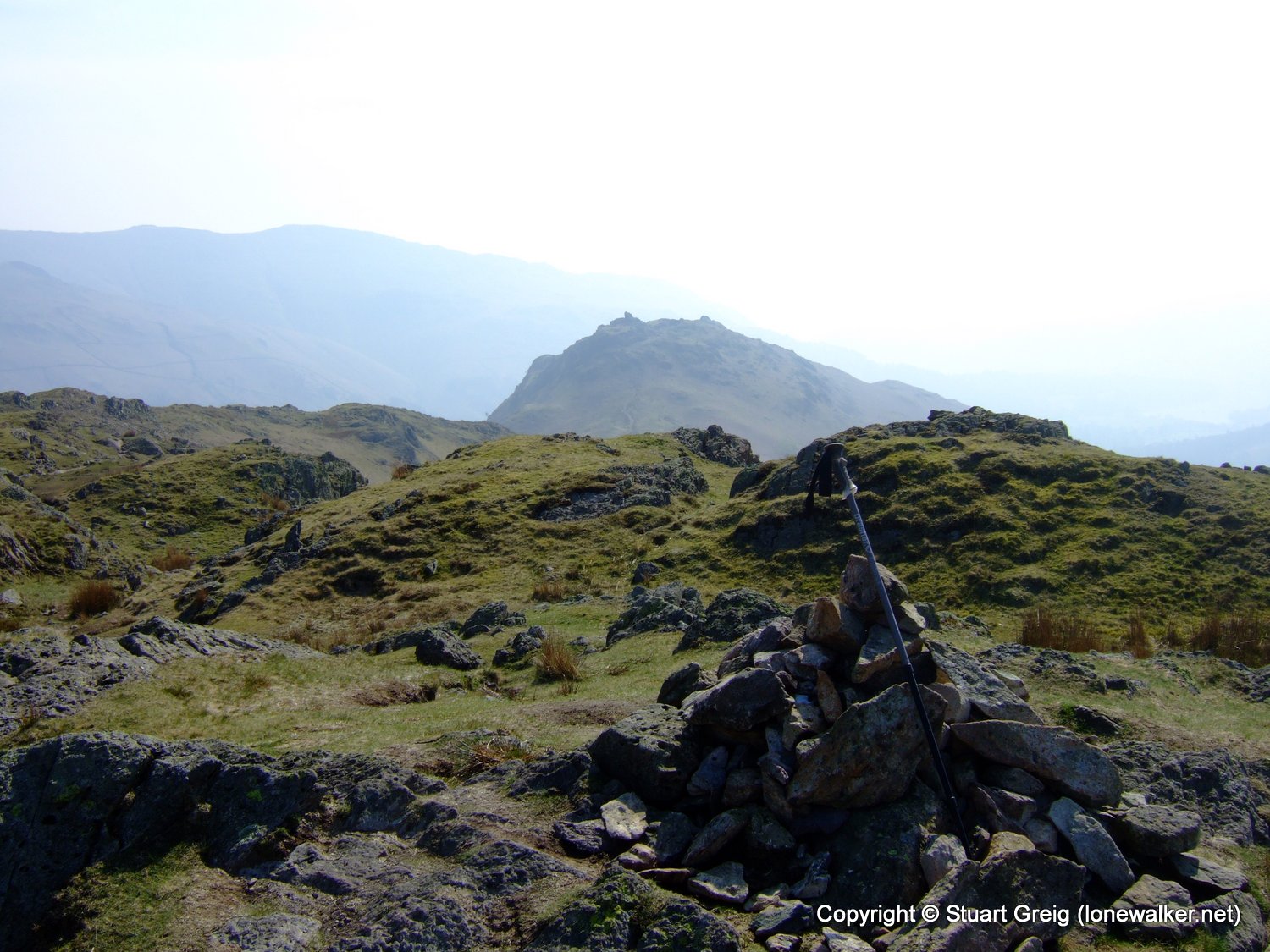 The last steep little climb up to Helm Crag I decided to do in one push, there were too many people coming the other way to stop every few metres for a breather. Rob was a little winded and took a few minutes longer to get to the top. While I was waiting I decided to scramble up the rock formation on Helm Crag and properly summit the hill. The vast majority of the people who claim to have “done” Helm Crag have not actually reached the summit, something Wainwright never did either. The final 30 feet or so are quite nerve racking as there is not an easy clambering route to the top. However, I managed it and sat waiting for Rob to take my photo, before clambering down again. My heart rate after that little descent was much faster than after the climb up the hill to Helm Crag – simply due to adrenalin. 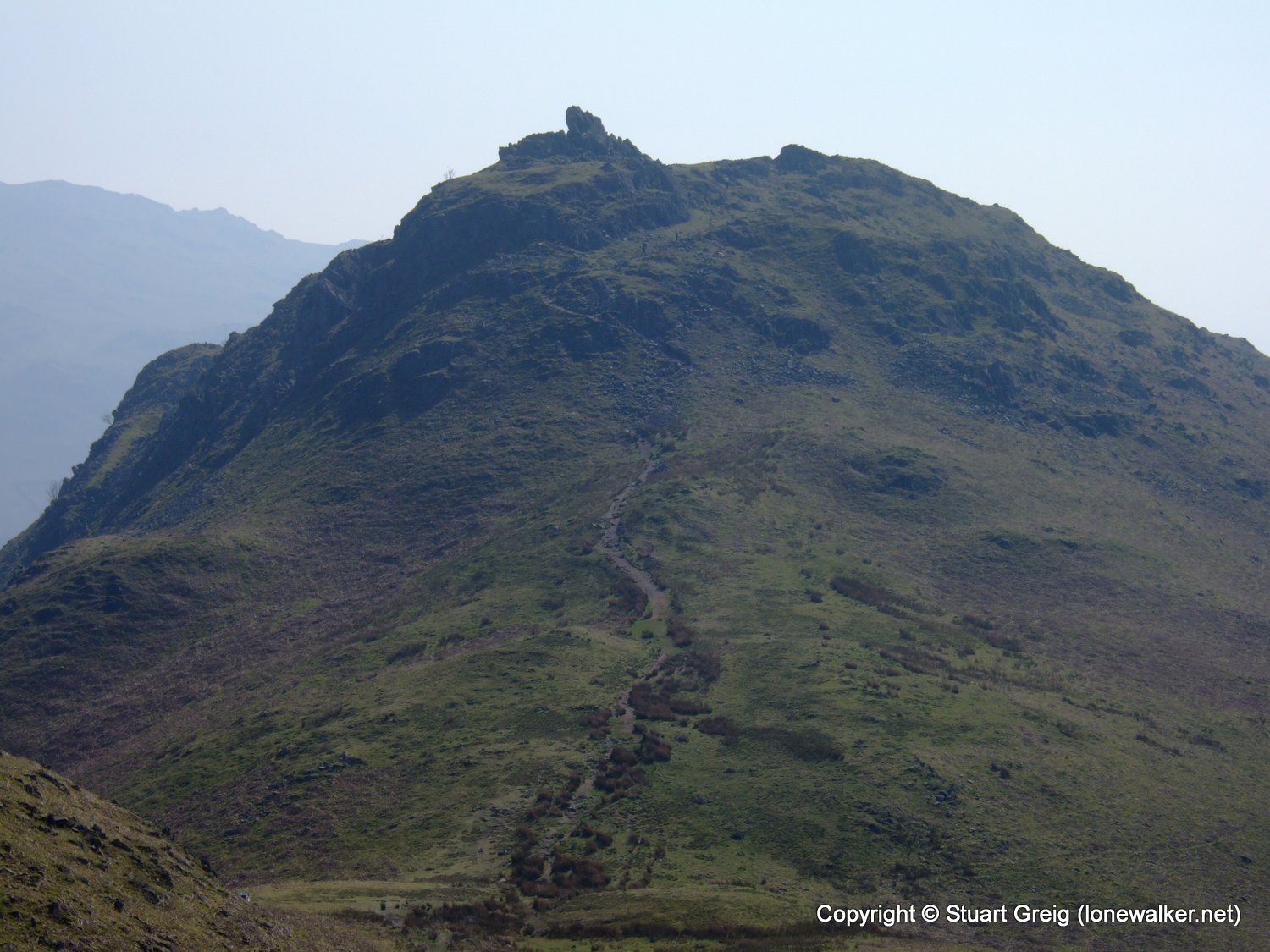 The path up to Helm Crag from Gibson Knott 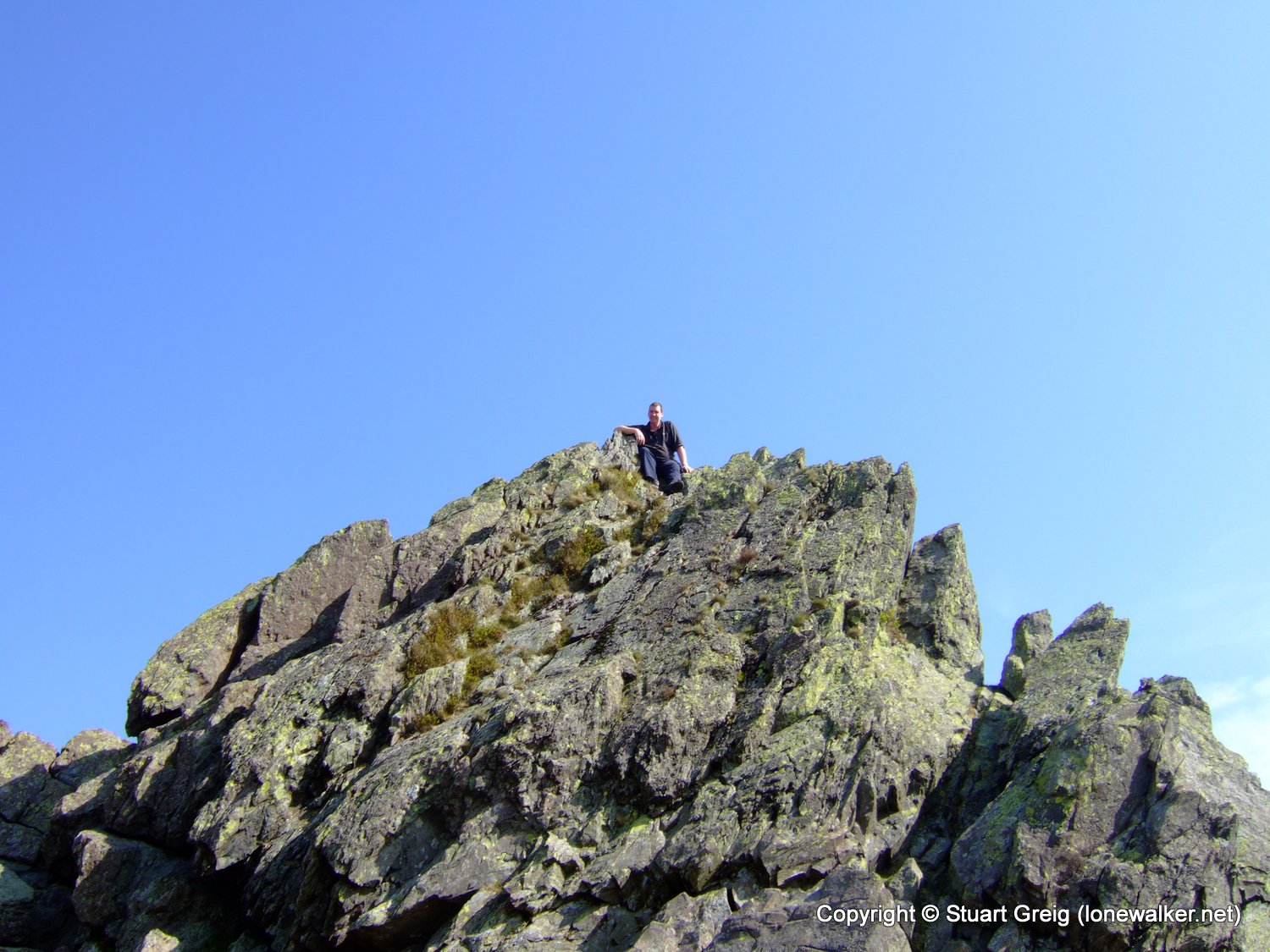 Me on the true summit of Helm Crag summit 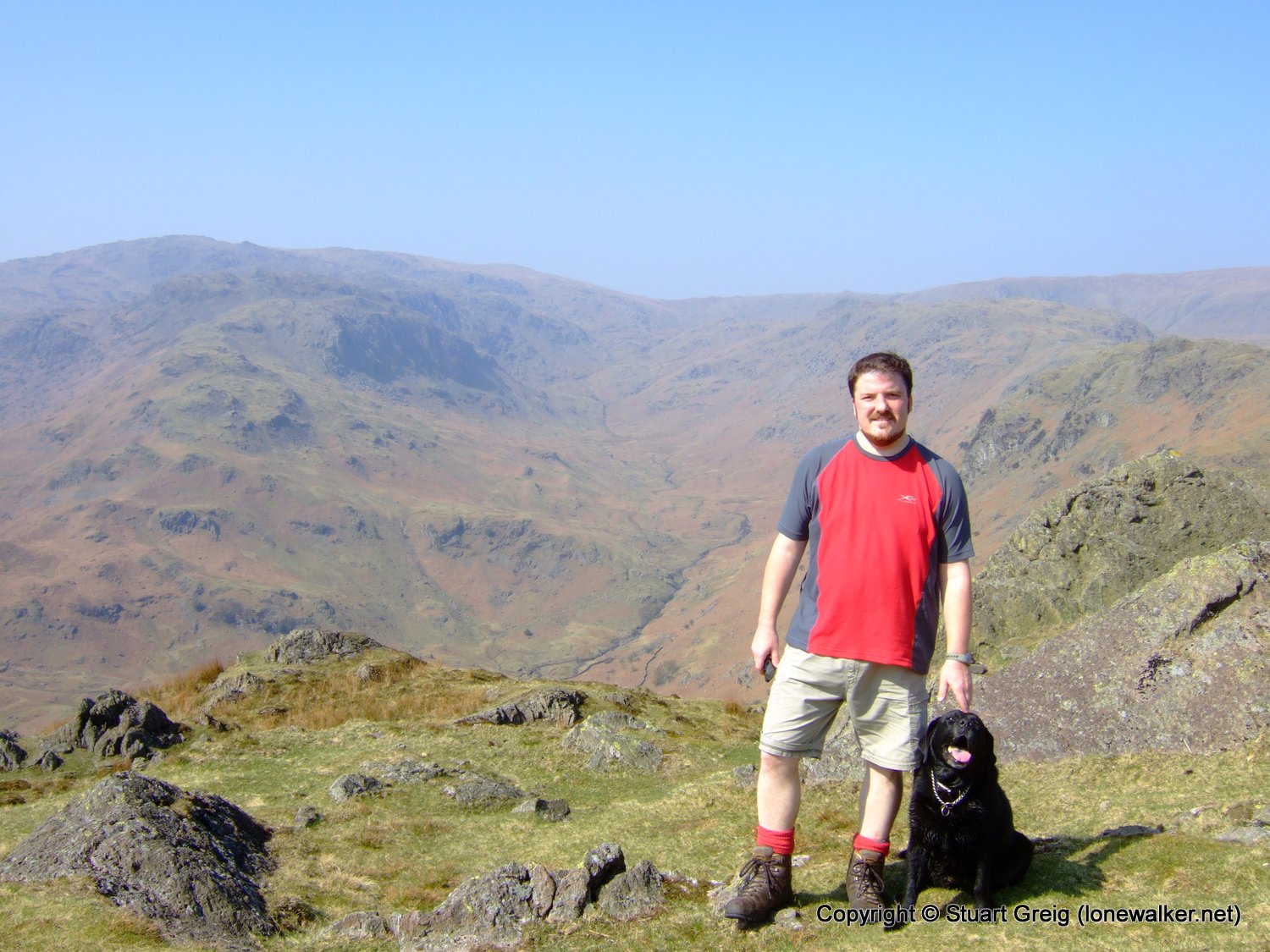 Rob and Dana on Helm Crag 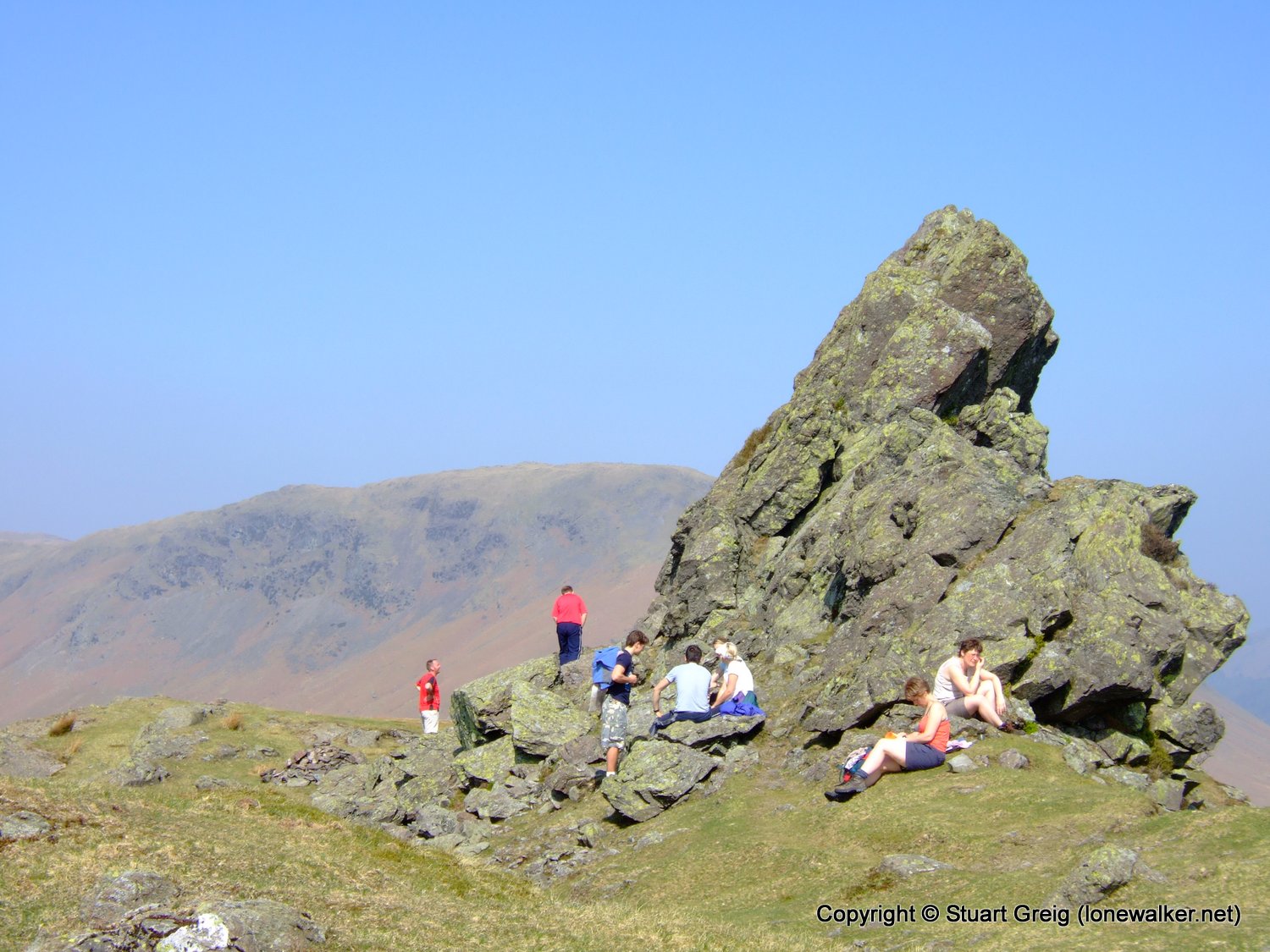 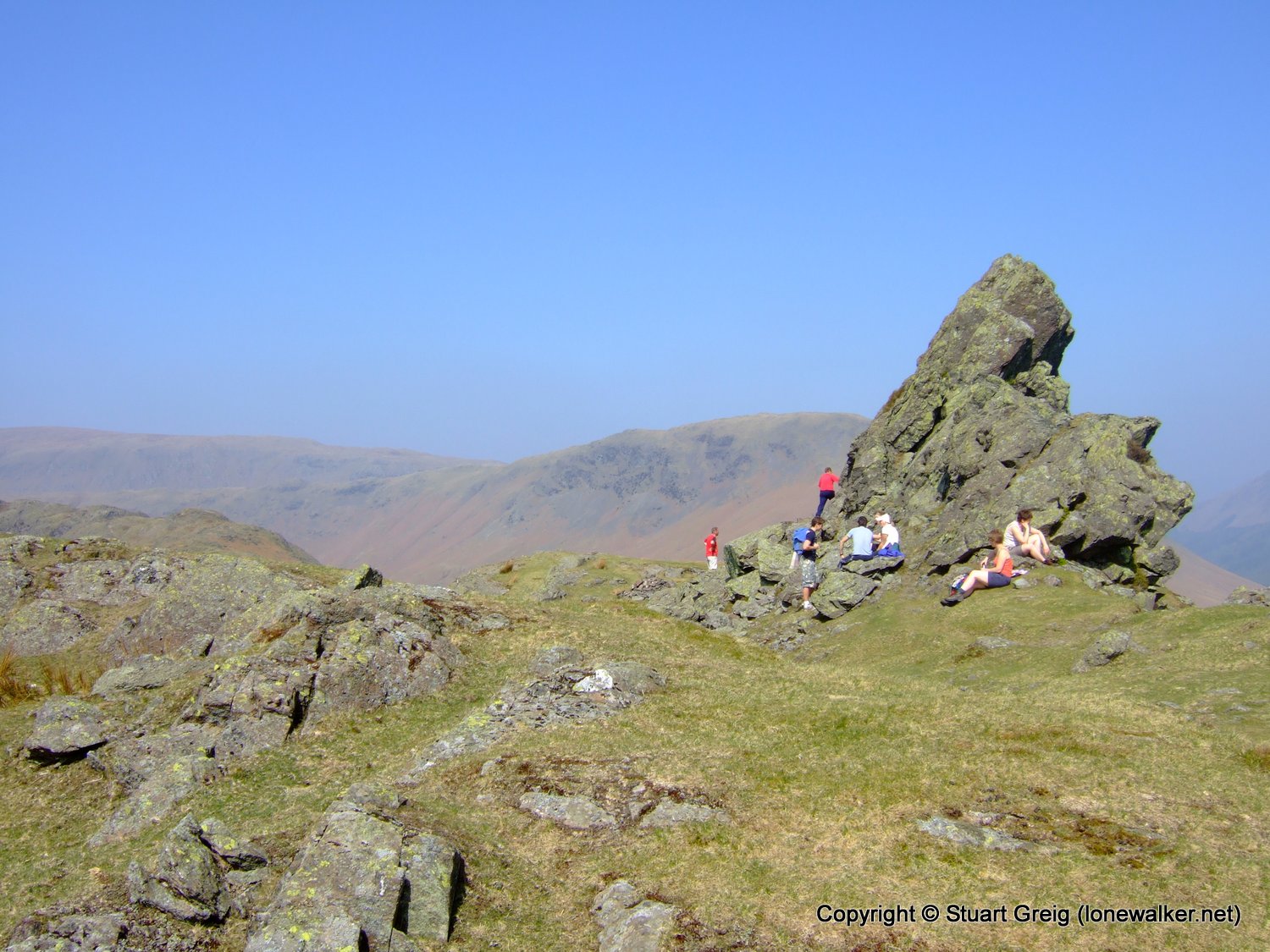 The path back down to Grasmere is very steep and my knees were quite wobbly by the time we reached the flat stuff. We were both very hot and sweaty and we had both already exhausted our fluids, so we were looking forward to a nice cold pint of diet coke in Grasmere, but we were unsure of how far it was to the nearest pub. It was at this point that an interesting little cameo occurred, showing how differently we both see the same event. Two little girls were walking along the path towards us, one of them was sucking one of those two foot long ice pops; my thought was “she’s already finished half of it, its not even worth trying to nick it off her”. While Rob’s first thought was “thank goodness, its only half an icepop to Grasmere!”

Grasmere was packed, but we managed to get a table in the Lamb Inn where they were happy to provide a bowl of water for Dana and cold wet drinks for us. All in all the perfect ending to a great days walking. Thanks Rob! Where to next mate?