Download file for GPS
The fine weather finally coincided with a weekend and Tex and I set off for the Lakes and a wander in the Southern Fells. We didn’t leave as early as usual as Tex had been to a party the night before and wanted a lie in. We were on site at the Old Dungeon Ghyll Hotel for just before 09:00 though and the car park was already beginning to fill up (at least so we thought). It actually turned out that people don’t care how they park in here. With no white lines to guide them folk park wherever they wish, with no regard to how other cars are going to be able to reverse out of a space when they want to leave. When we returned to the car at the end of the walk it was clear that several visitors would not be able to leave as they were blocked in by people who had arrived later, found nowhere sensible to park and just double-parked anywhere.

The sky was mostly clear and although it wasn’t particularly warm for the time of year it was still shirt-sleeve weather. We took the Cumbria Way path from the Old Hotel and walked into Mickleden with views ahead to Bow Fell and Rossett Pike. It was nice to have a flat walk-in, especially as this was my first outing in several weeks and I was unsure as to how well I was going to be able to cope with the demands of the day after being ill most of the week with Mumps. 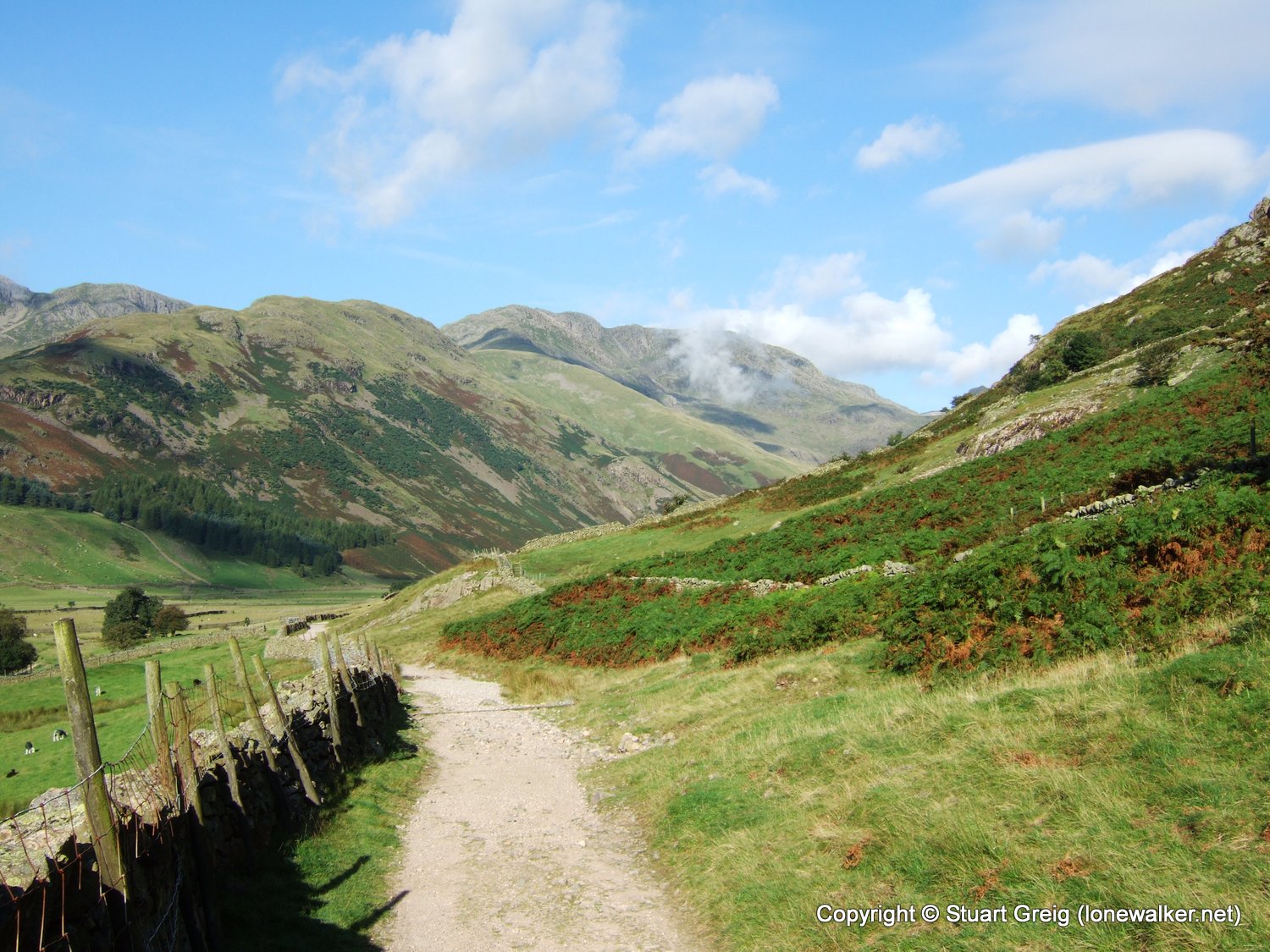 Looking along the Cumbria Way to Bow Fell, The Band on the left 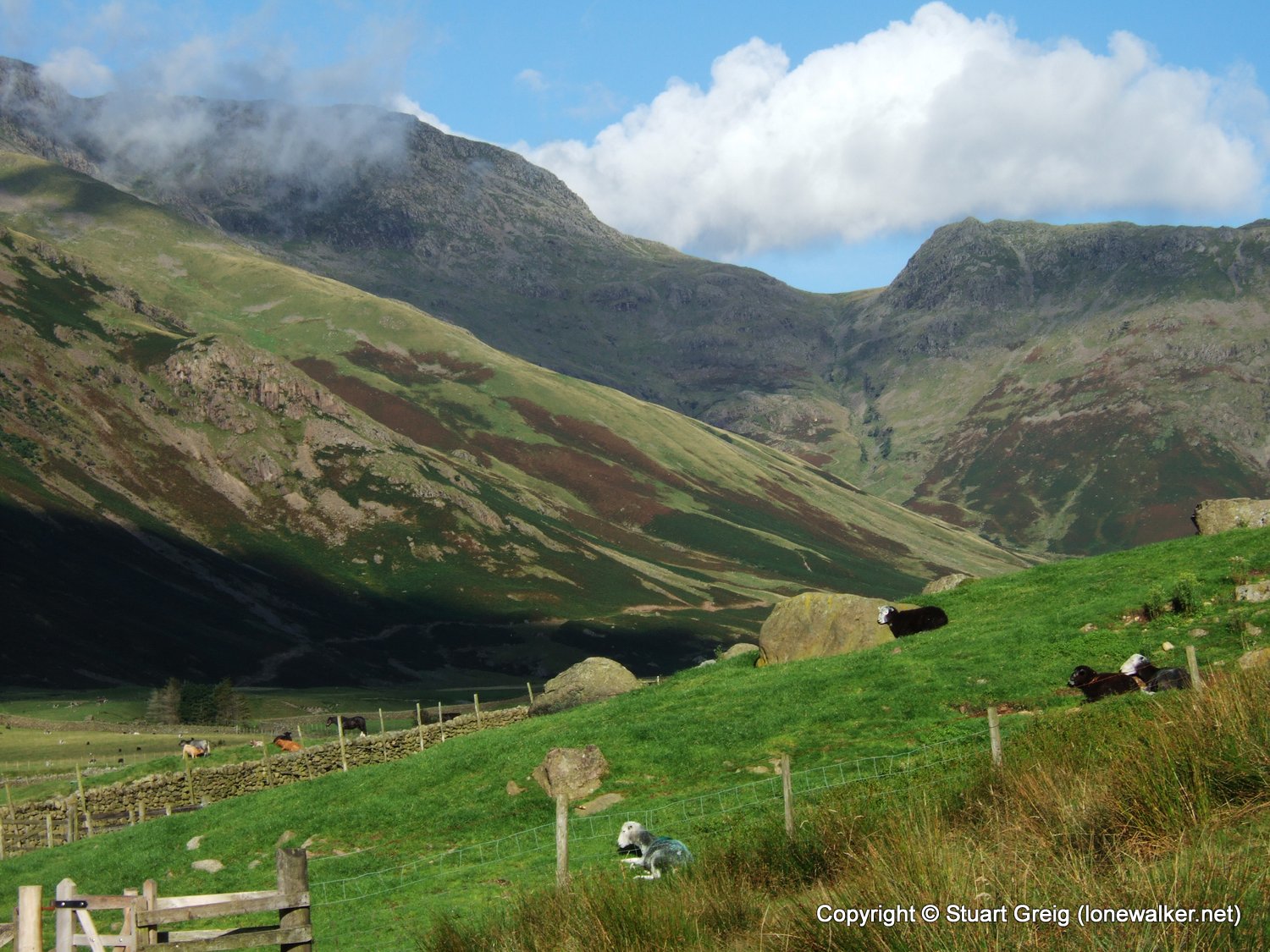 Looking far ahead to Rossett Pike and Bow Fell 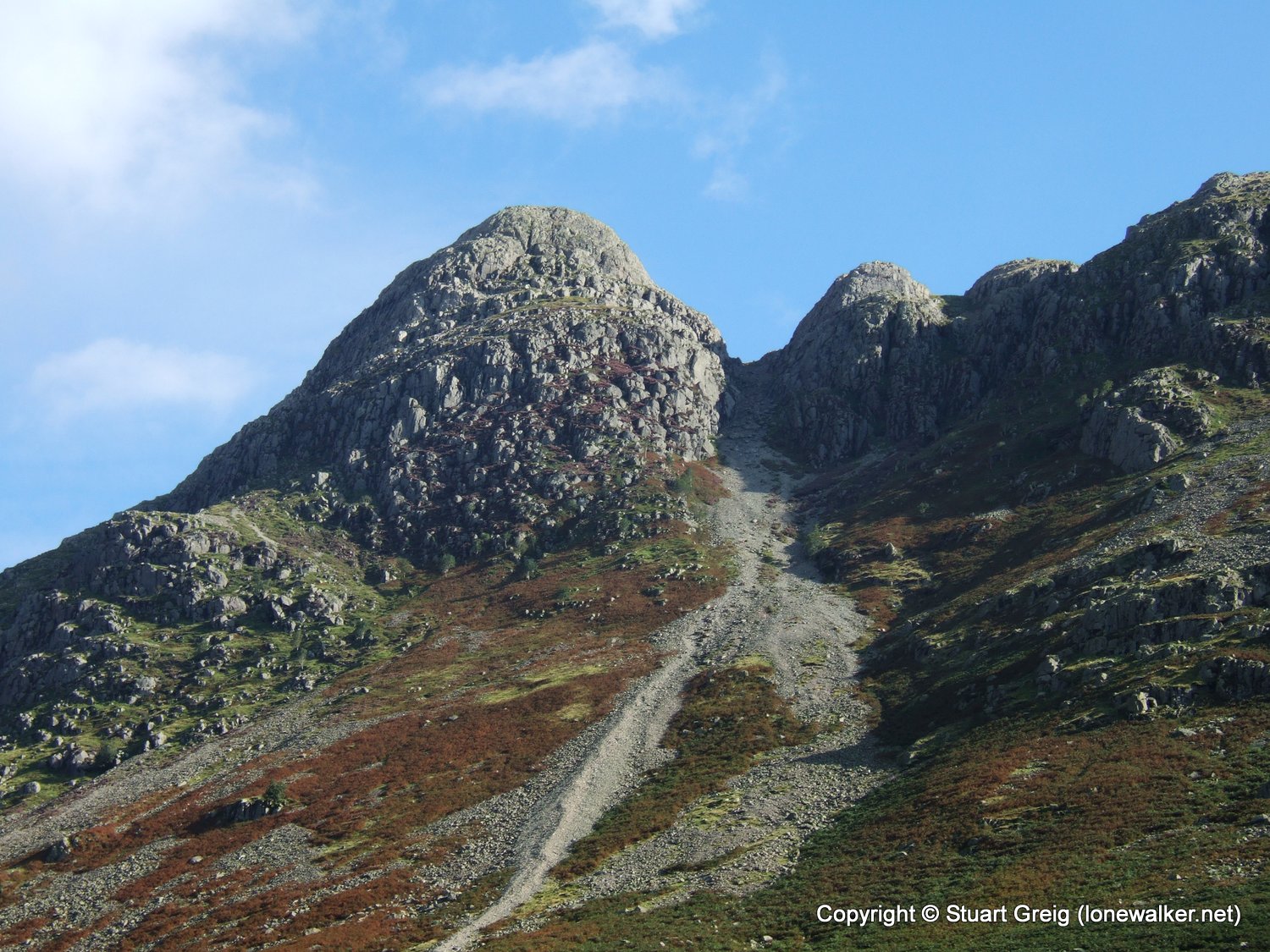 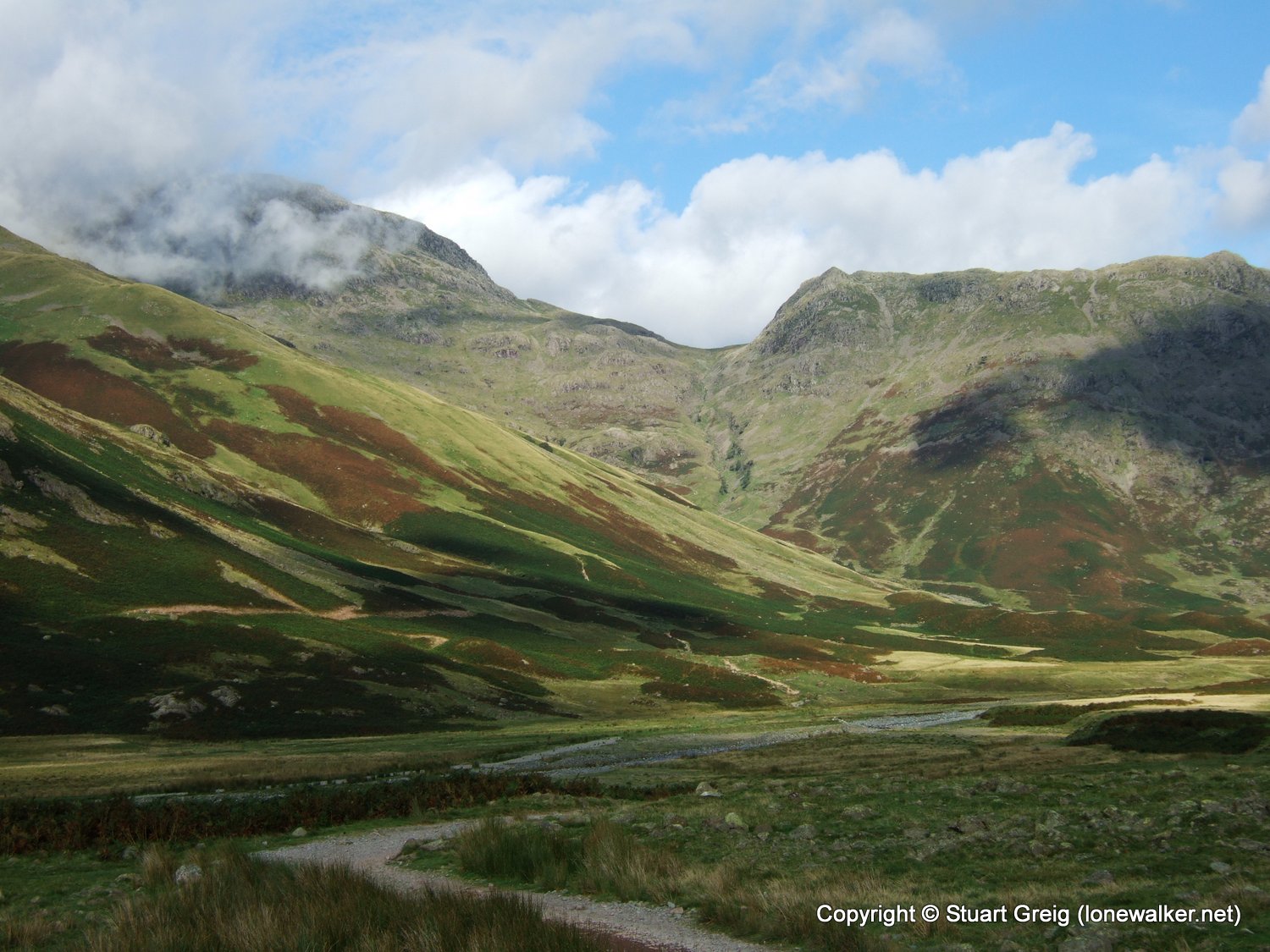 I made a quick diversion from the path to try and get an arty picture of the fells with Mickleden Beck in the foreground. We had both agreed to take it easy today and it was little stops like this that helped us do that. 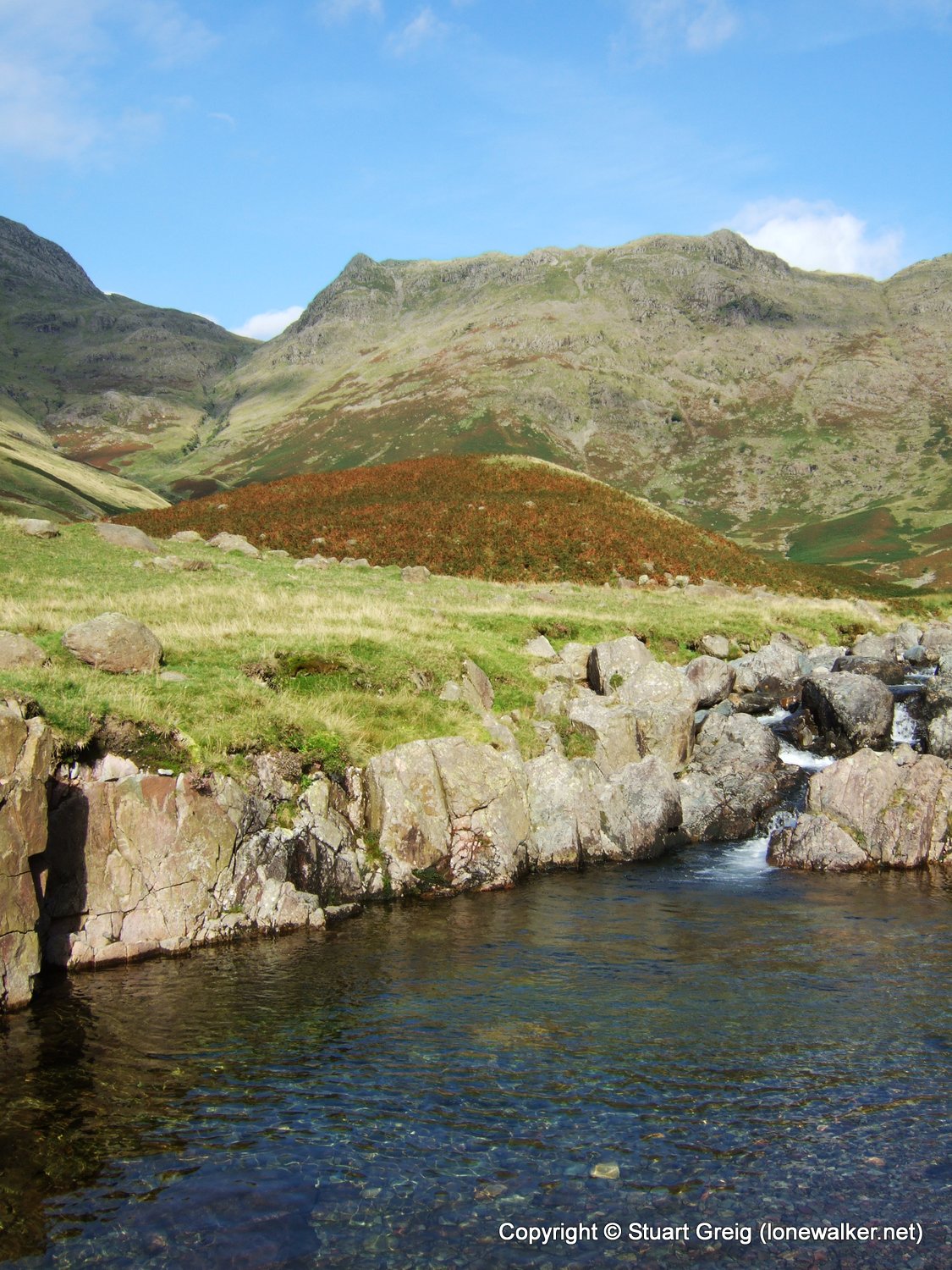 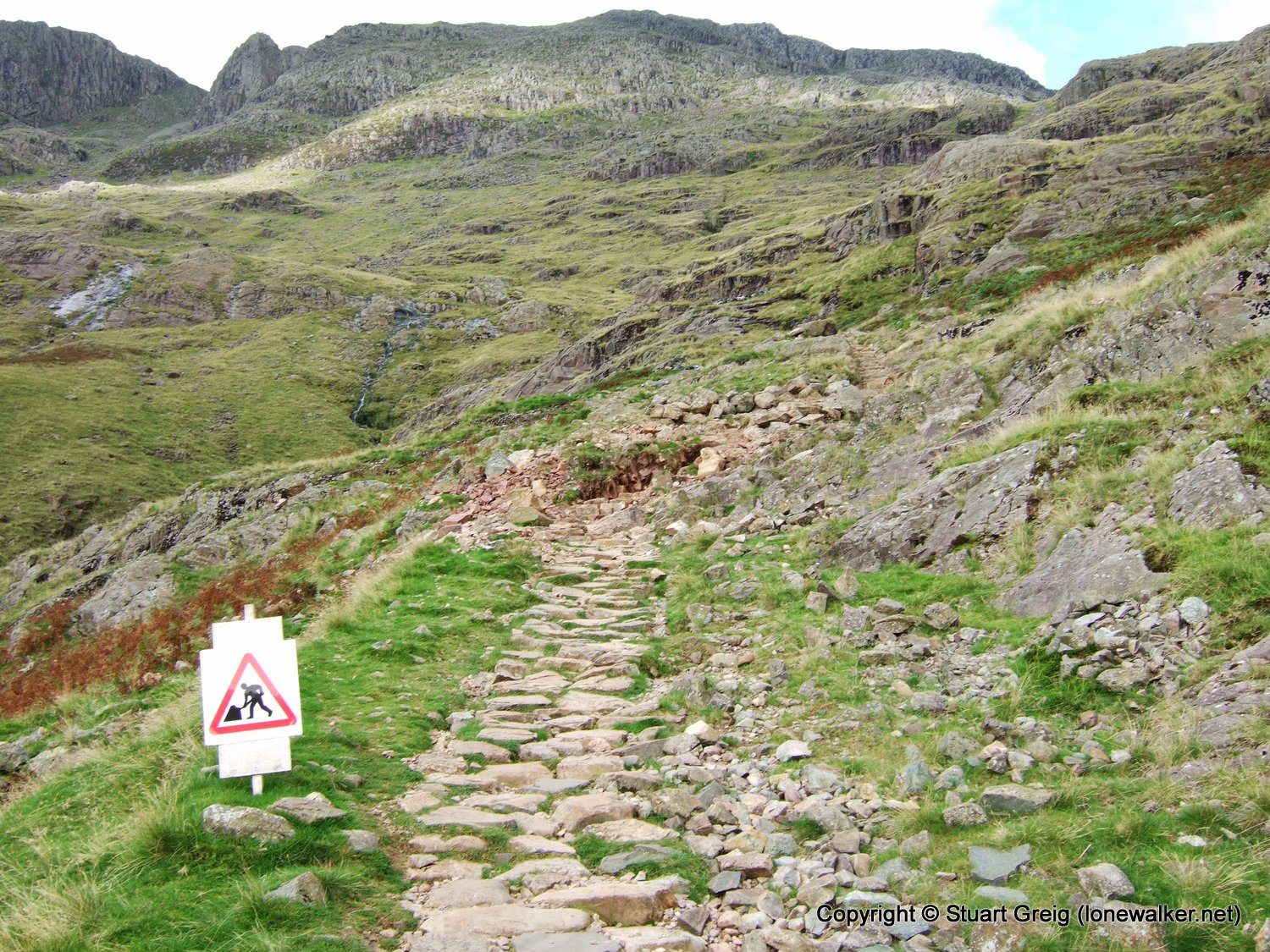 The path works beside Rossett Gill 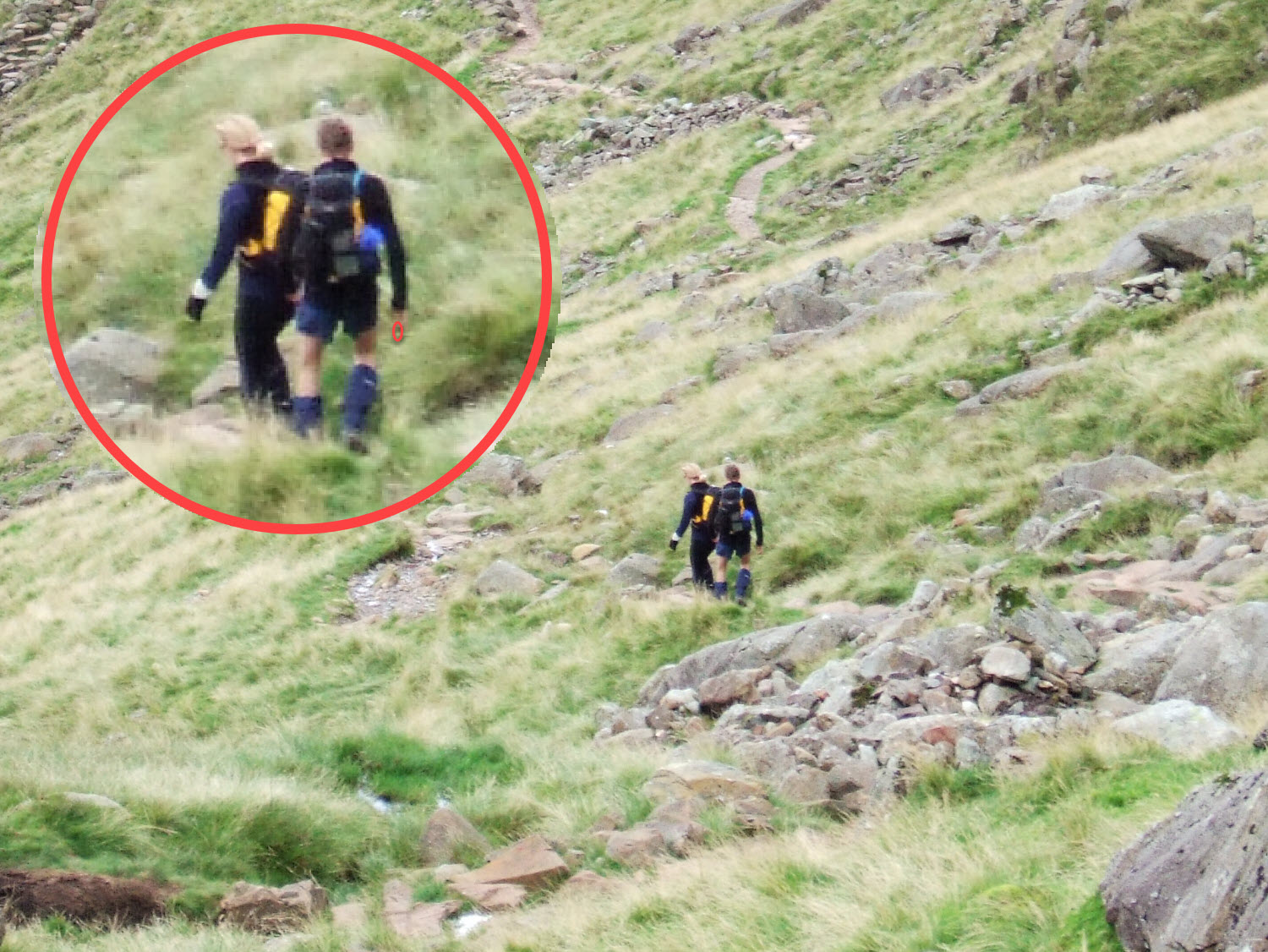 As we climbed the path we met a couple coming down, which seemed a bit early, but the oddest thing about the bloke was his selection of clothing. I’ve mentioned elsewhere on many occasions, the often fanatical use of gaiters by some people, but I’m not sure I’ve ever seen anyone using short shorts and gaiters. Not knee length shorts like most folk wear, but the sort of shorts that runners wear.

I know the hills are no place for the fashion conscious, but there are limits! Why he couldn’t have just used long socks I don’t know. It wasn’t wet and there’s not much heather or bracken on these fells, unless you go seriously off track, so I’m not sure why there would be the need for gaiters.

Another growing trend we both noticed is the way couples tend to dress the same. Maybe this is convenience; both going to the outdoor shop for a new jacket and buying the same one – but get different colours!

Okay, this rant has gone on long enough now – but pay attention people! 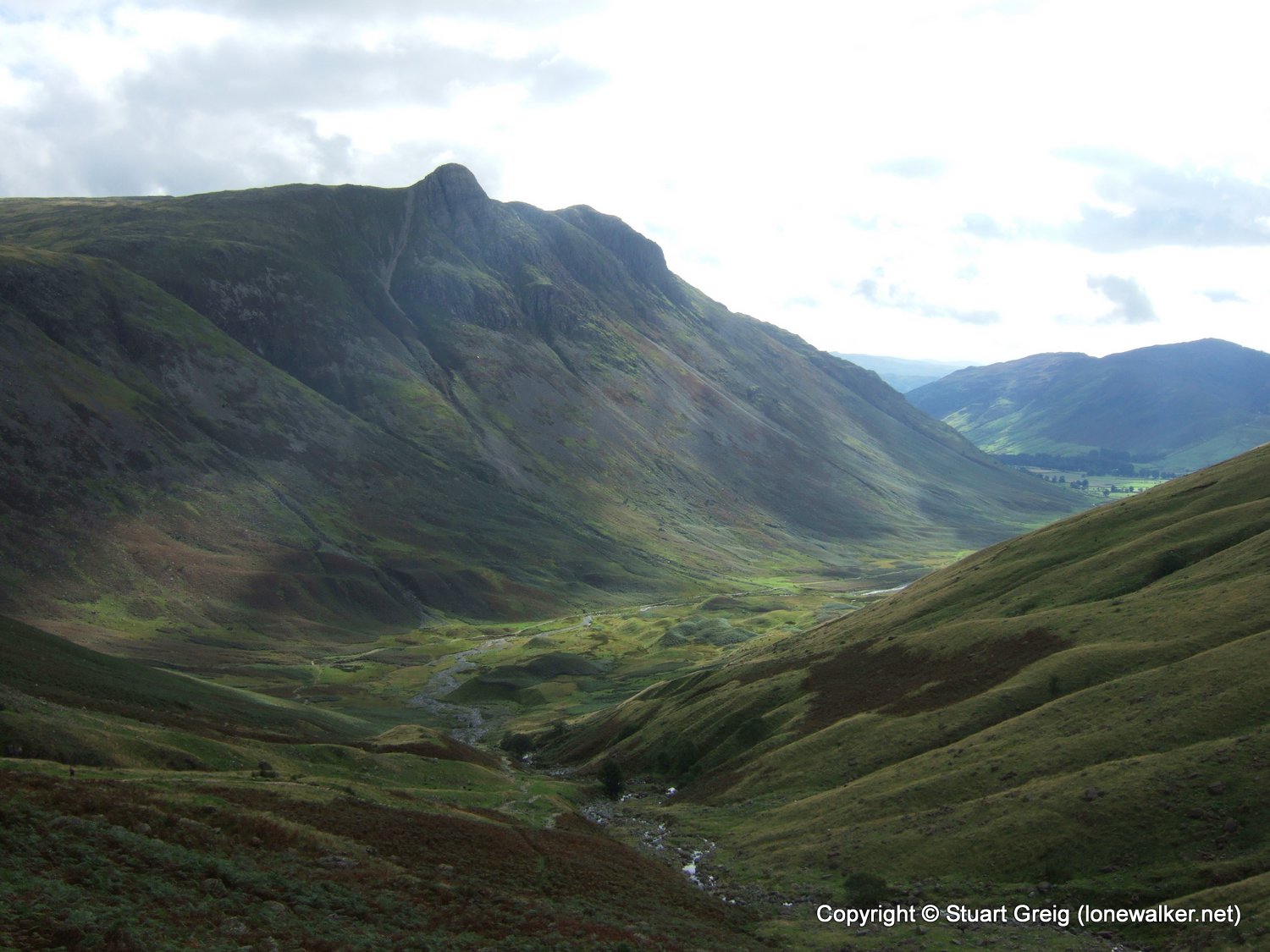 Looking down in to Mickleden 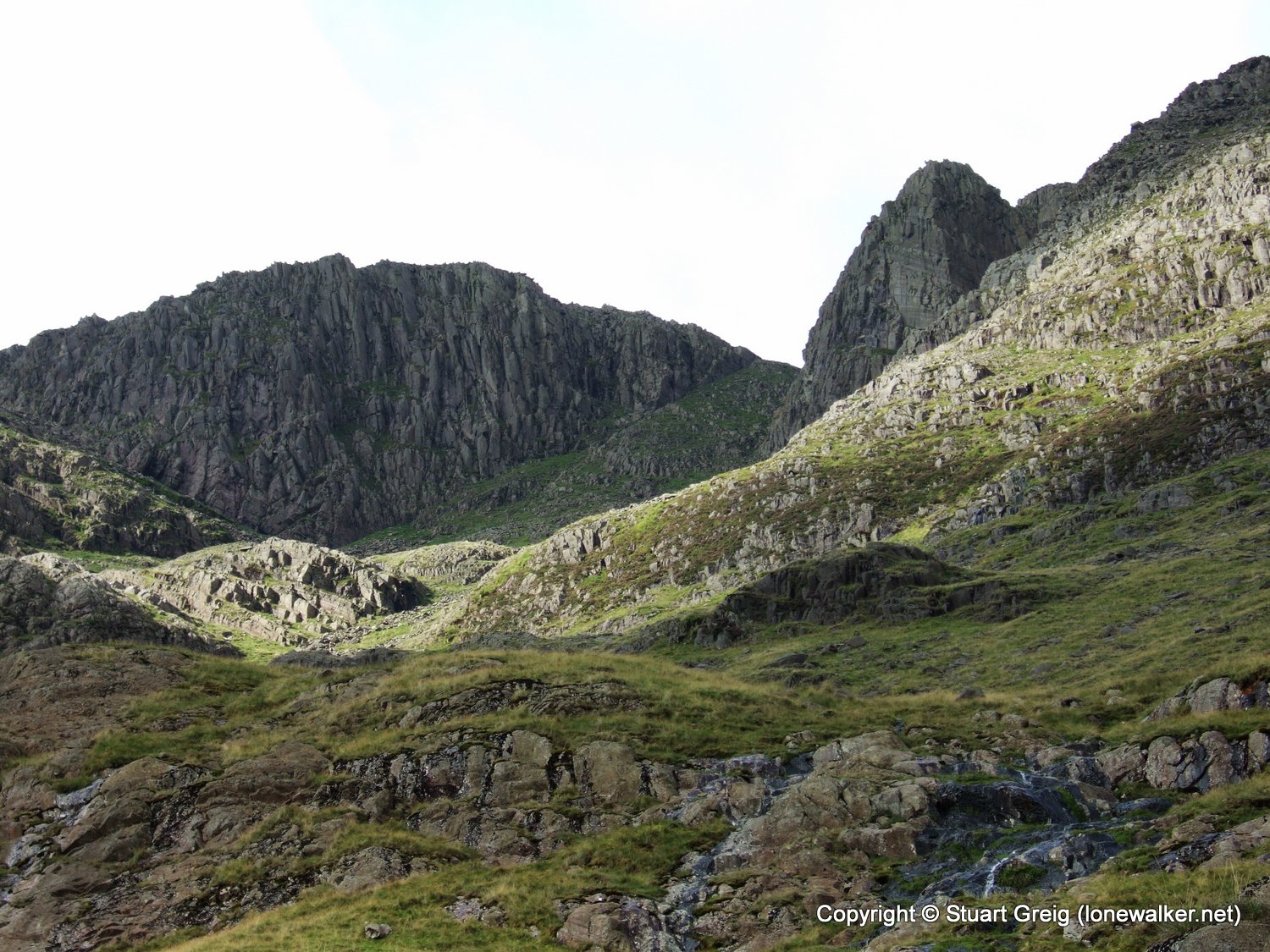 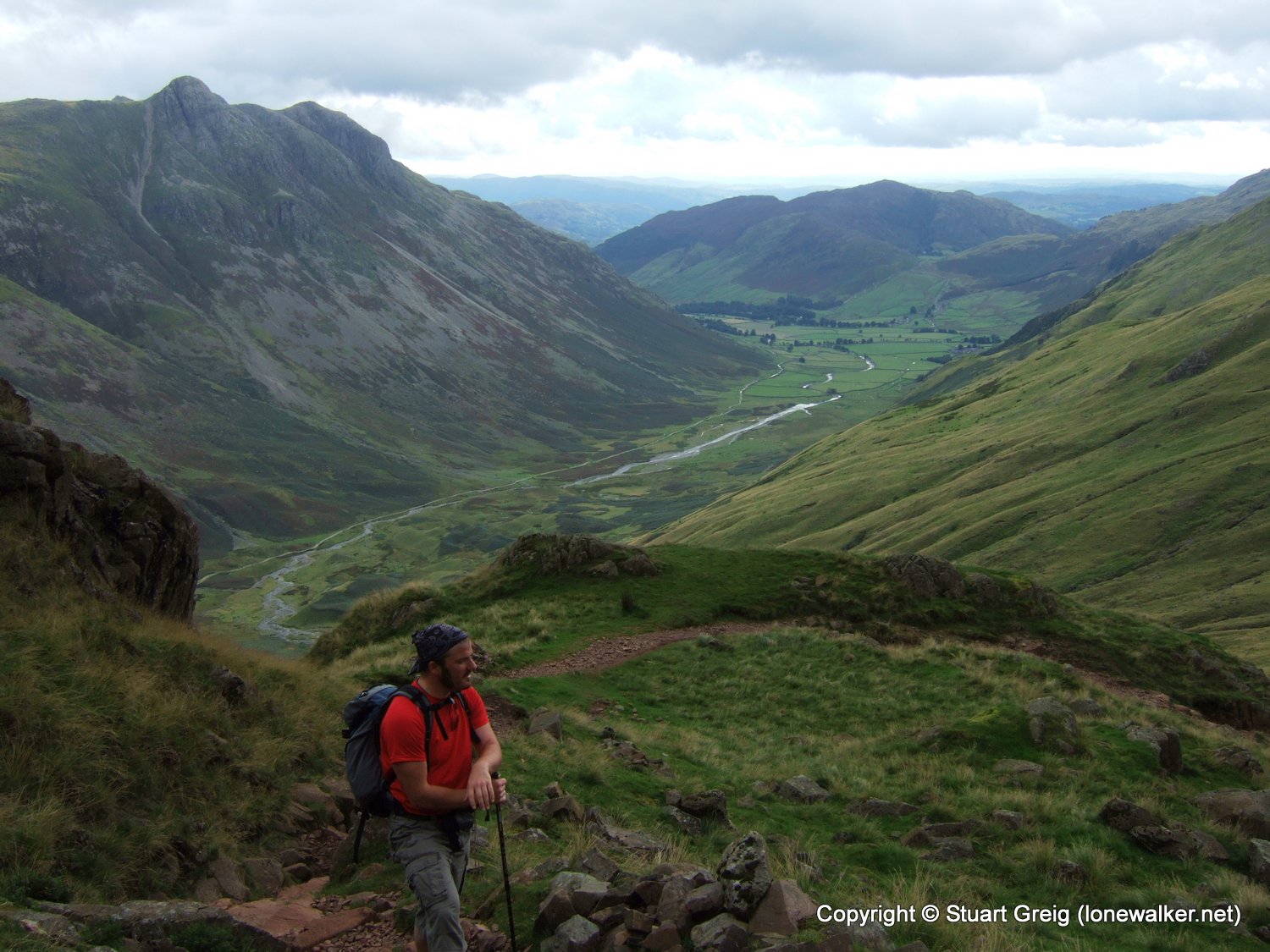 Tex, looking to Bow Fell with Mickleden behind 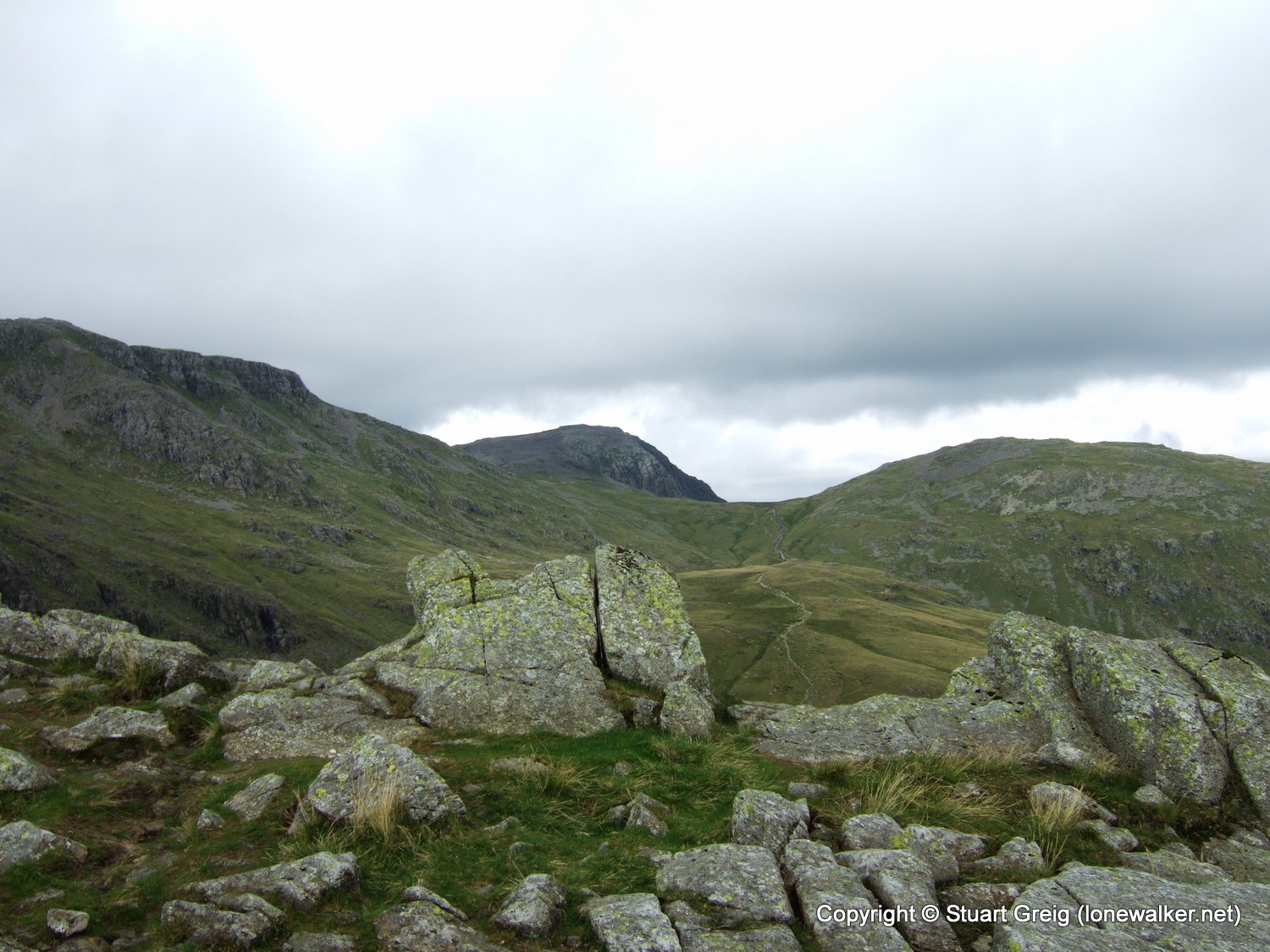 As we approached the top of Rossett Gill I took the opportunity to divert to Rossett Pike. It’s only a 10 minute walk to the summit cairn and back again, but Tex decided to wander down to Angle Tarn and wait for me there. We’d visited this Wainwright earlier in the year, but it was just too close to the path to not visit again, for me at least. 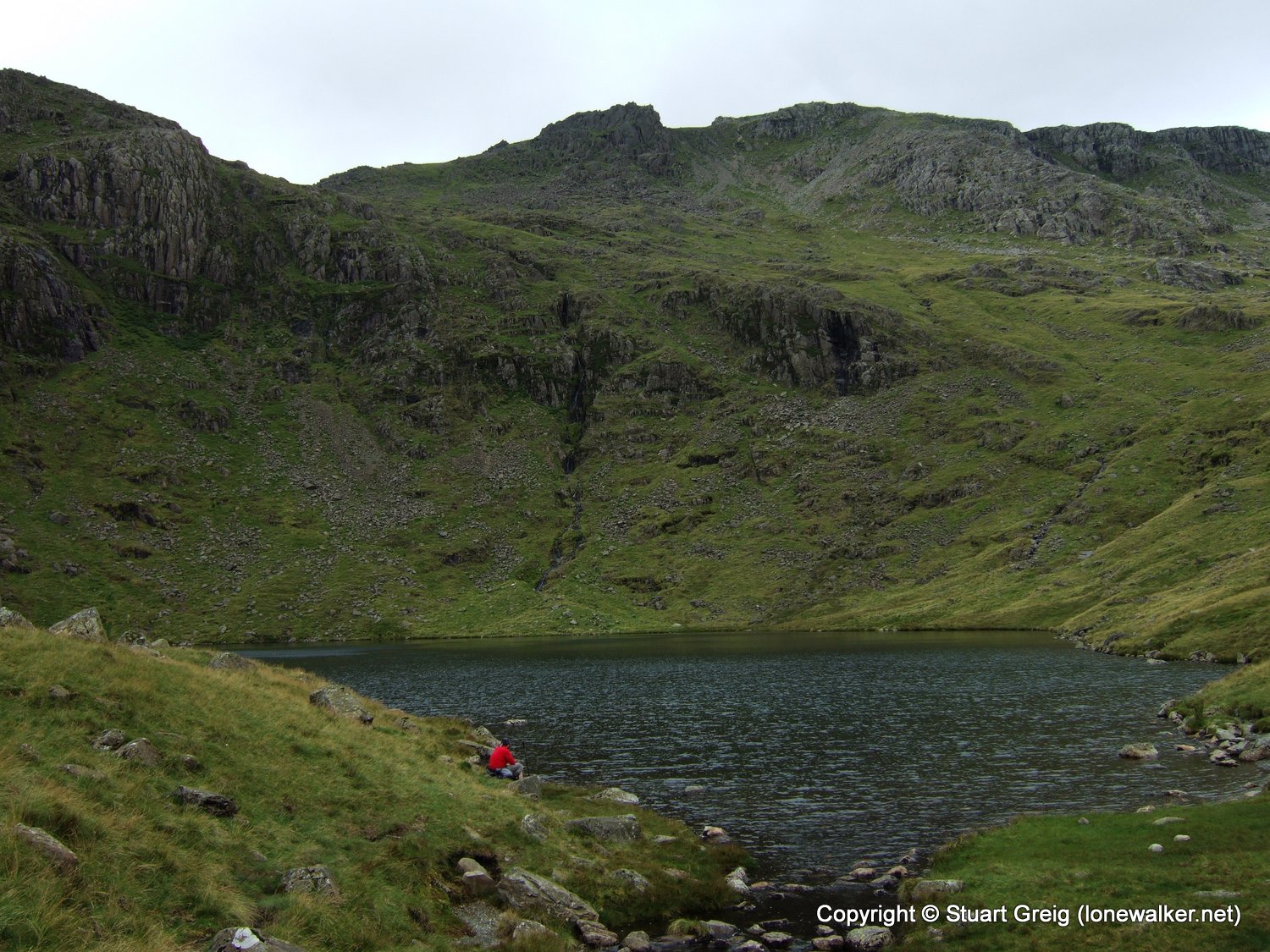 I found Tex musing by the tarn and what a splendid location it was too. Completely quiet with no-one else around and surrounded by big hills. 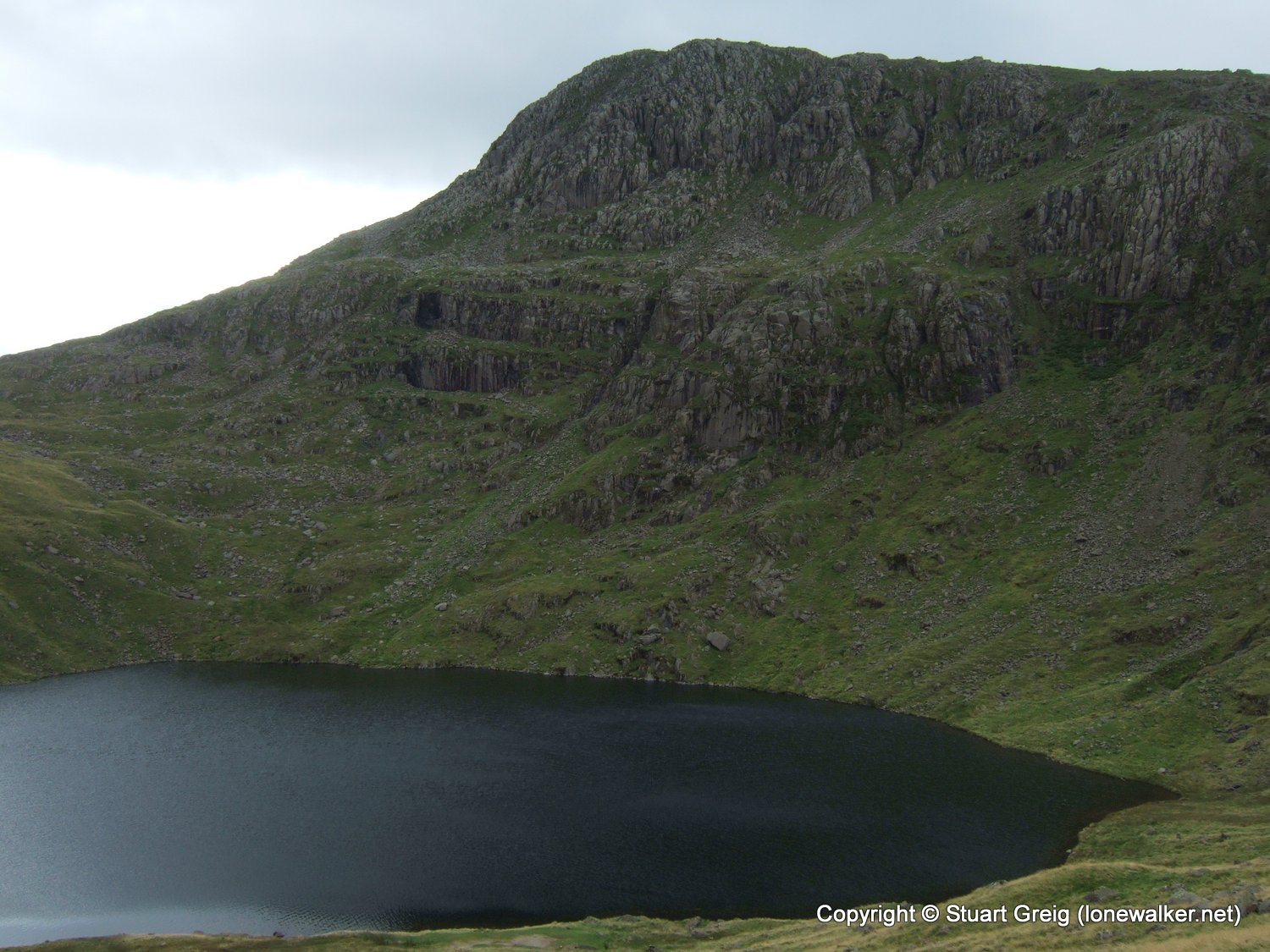 We were both in a jocular, light-hearted mood today and we were discussing bird life as we approached two slow moving backpackers on the path up to Esk Hause. Once within ear-shot of the two I described to Tex, a recent scientific study conducted on Blue Tits in sea-side resorts on the south coast that found than their traditional food sources of cream out of the tops of milk bottles and nuts from bird feeders were becoming so scarce that they were being forced to breed with seagulls in order to survive. The resulting birds were much larger, still looked like Blue Tits, but with black heads and were now feeding on the much more plentiful supply of chips, hot dogs and ice cream. It took Tex a little while to realise I was making it all up, but his incredulous mutterings seemed to add a sense of realism to the event and the two backpackers gave us open-mouth stares as we went past. 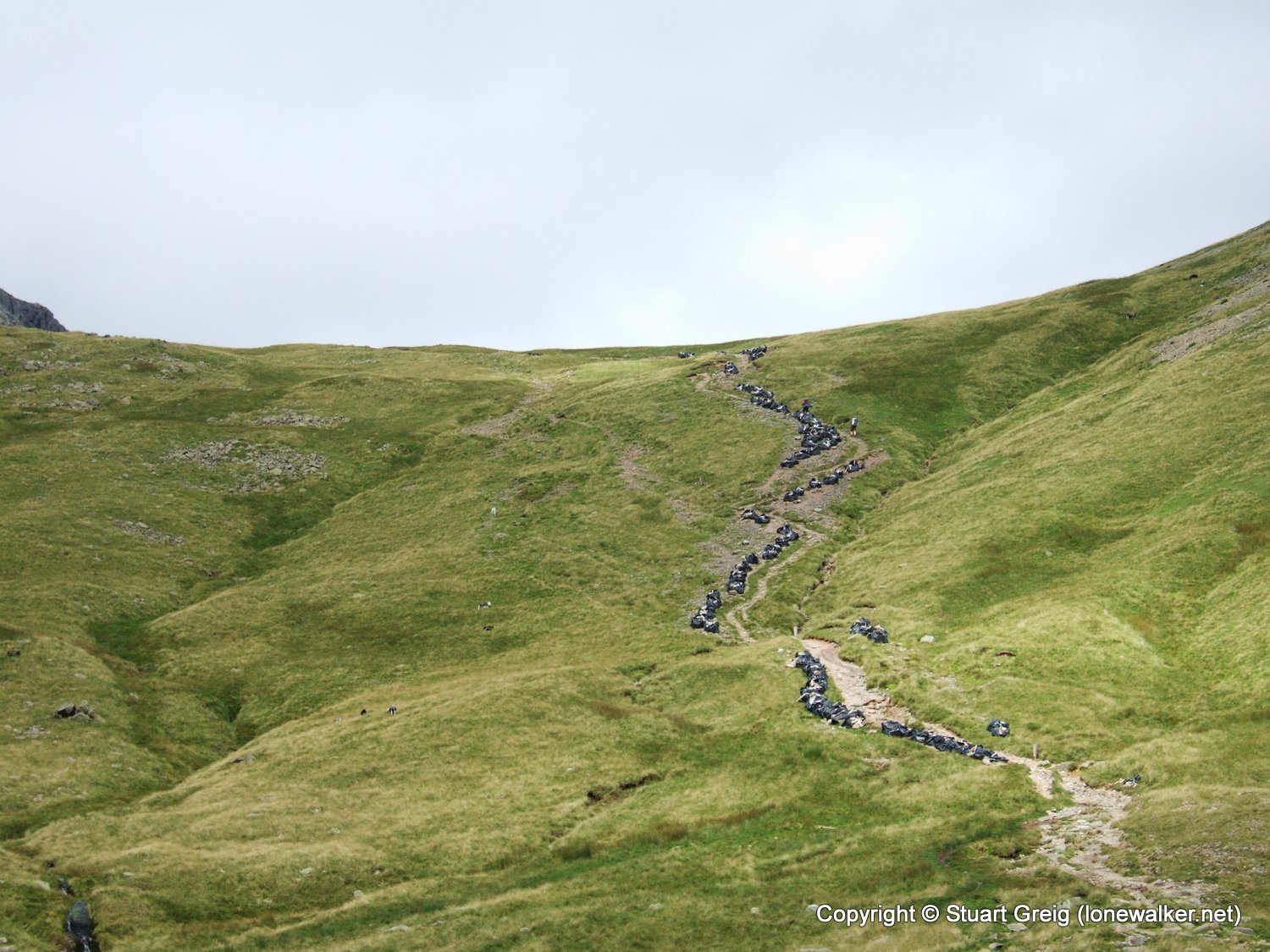 Path works on the way up to Esk Hause 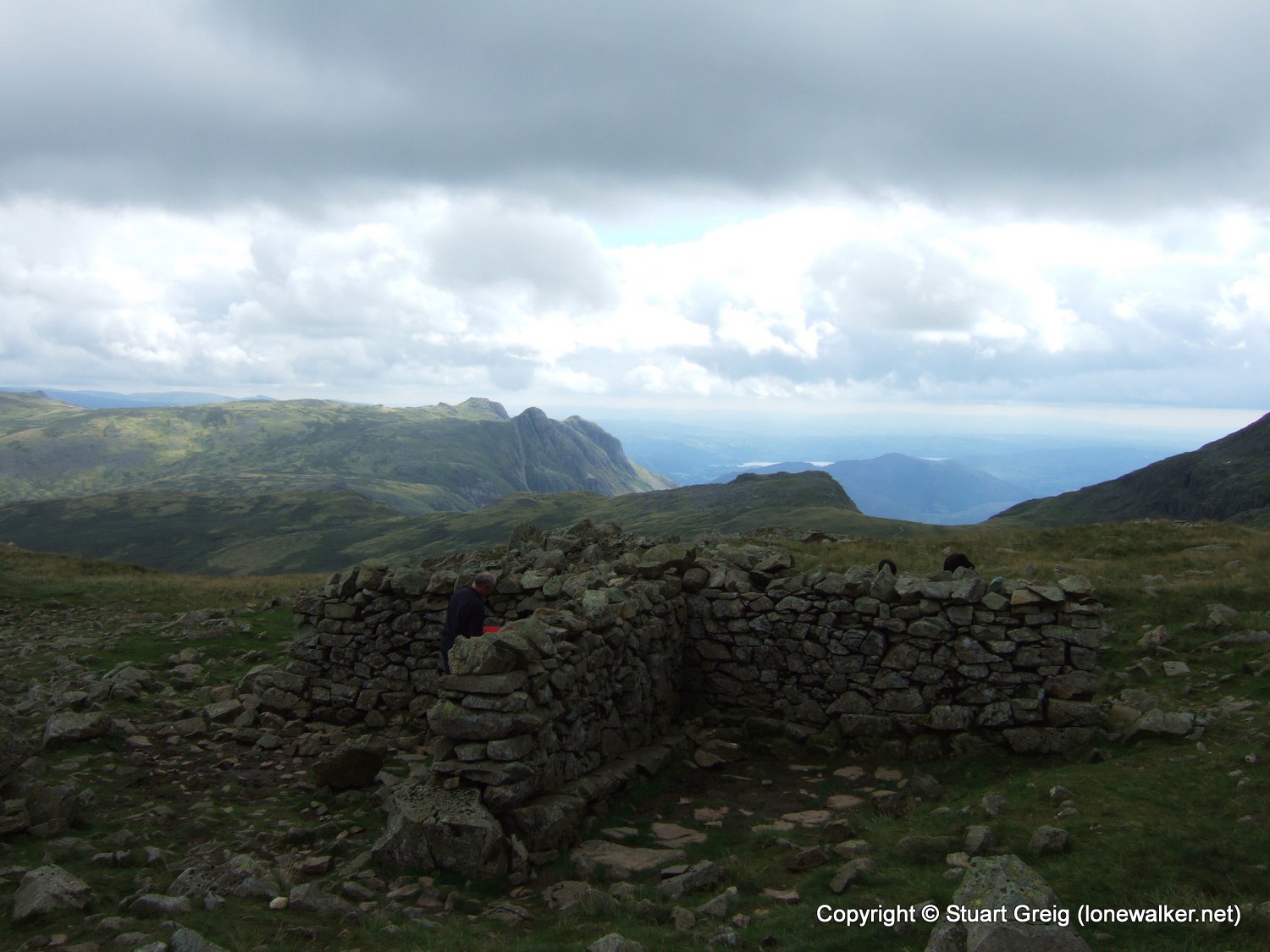 The shelter at Esk Hause 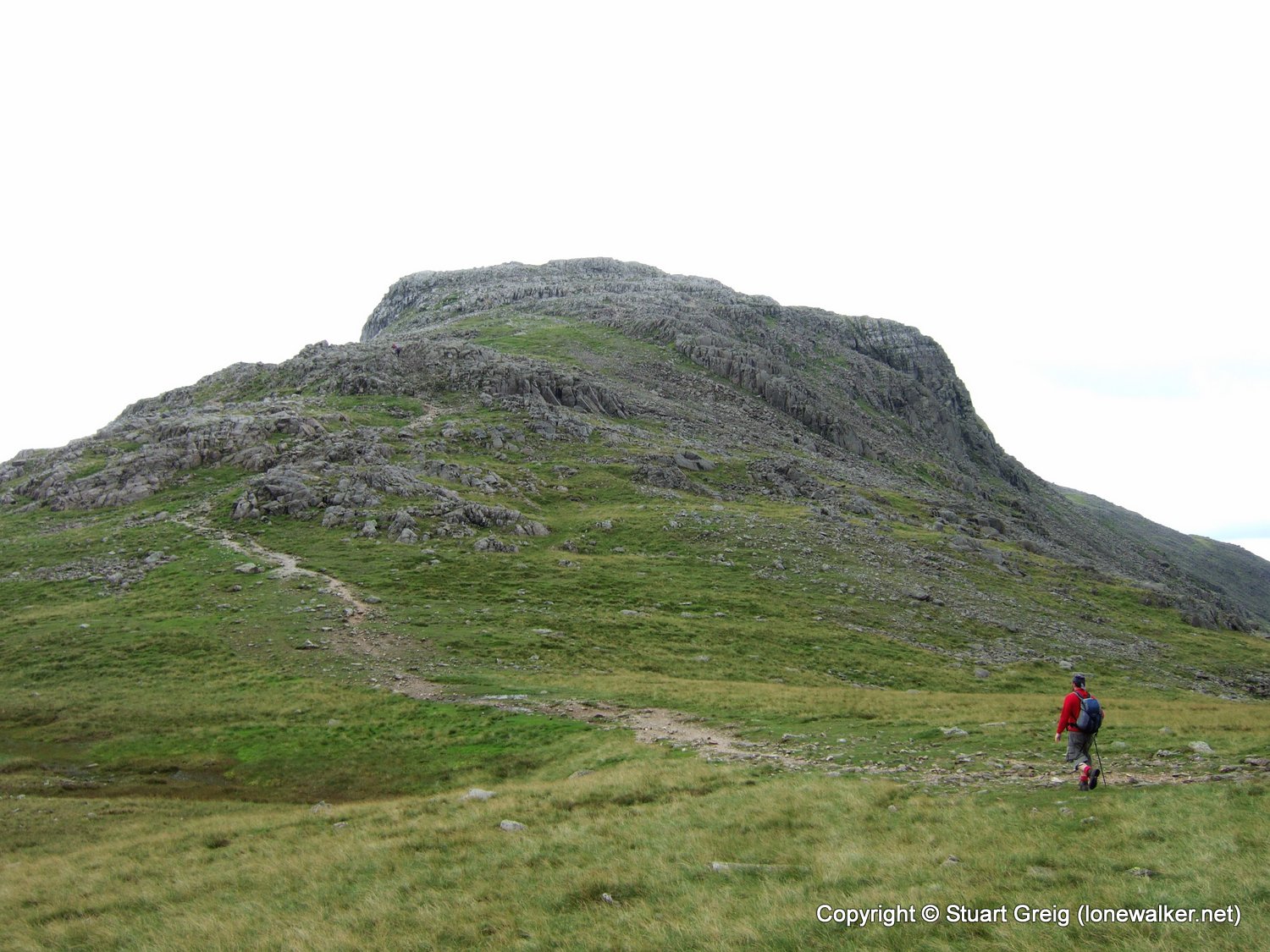 On approach to Esk Pike 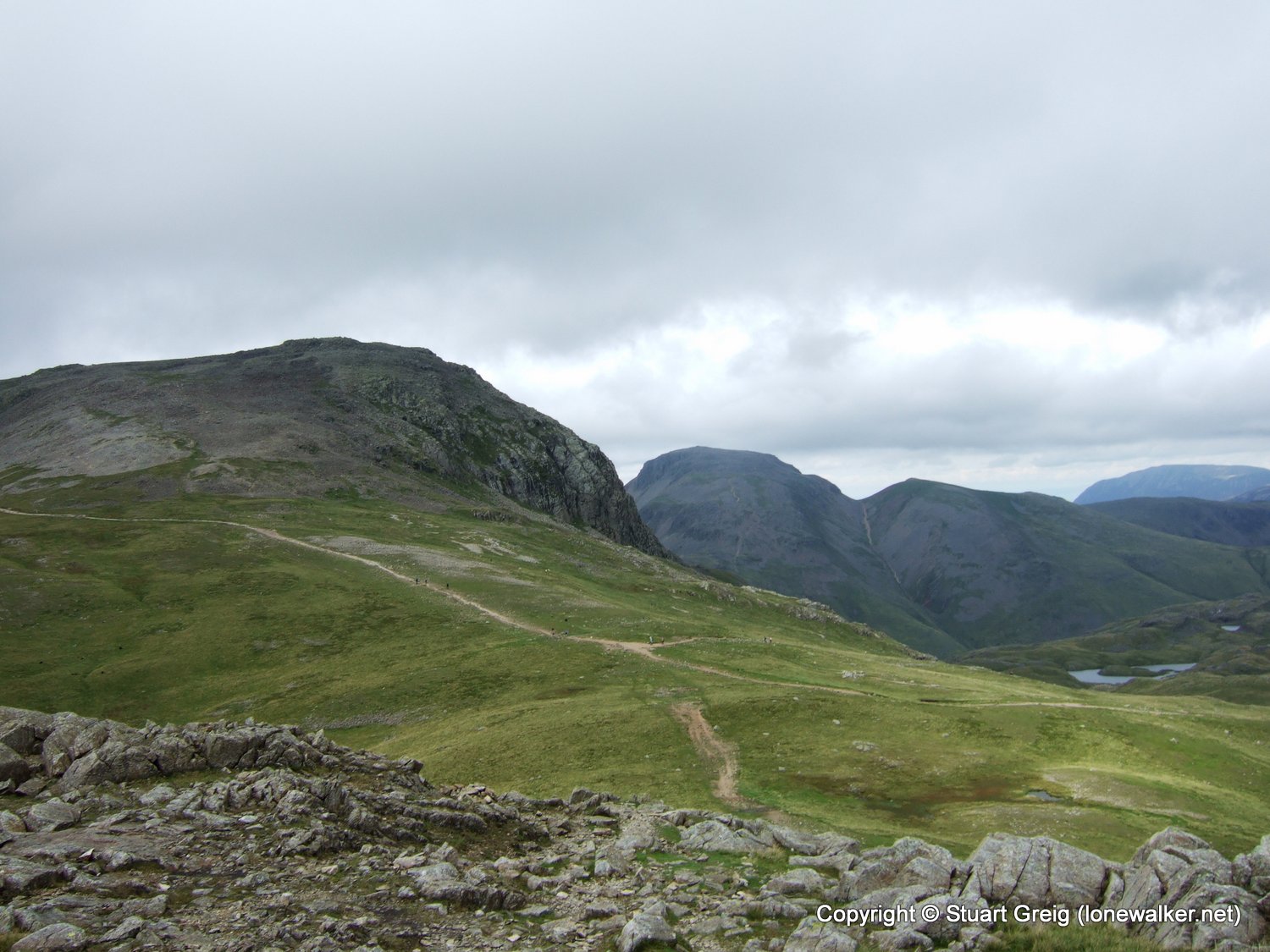 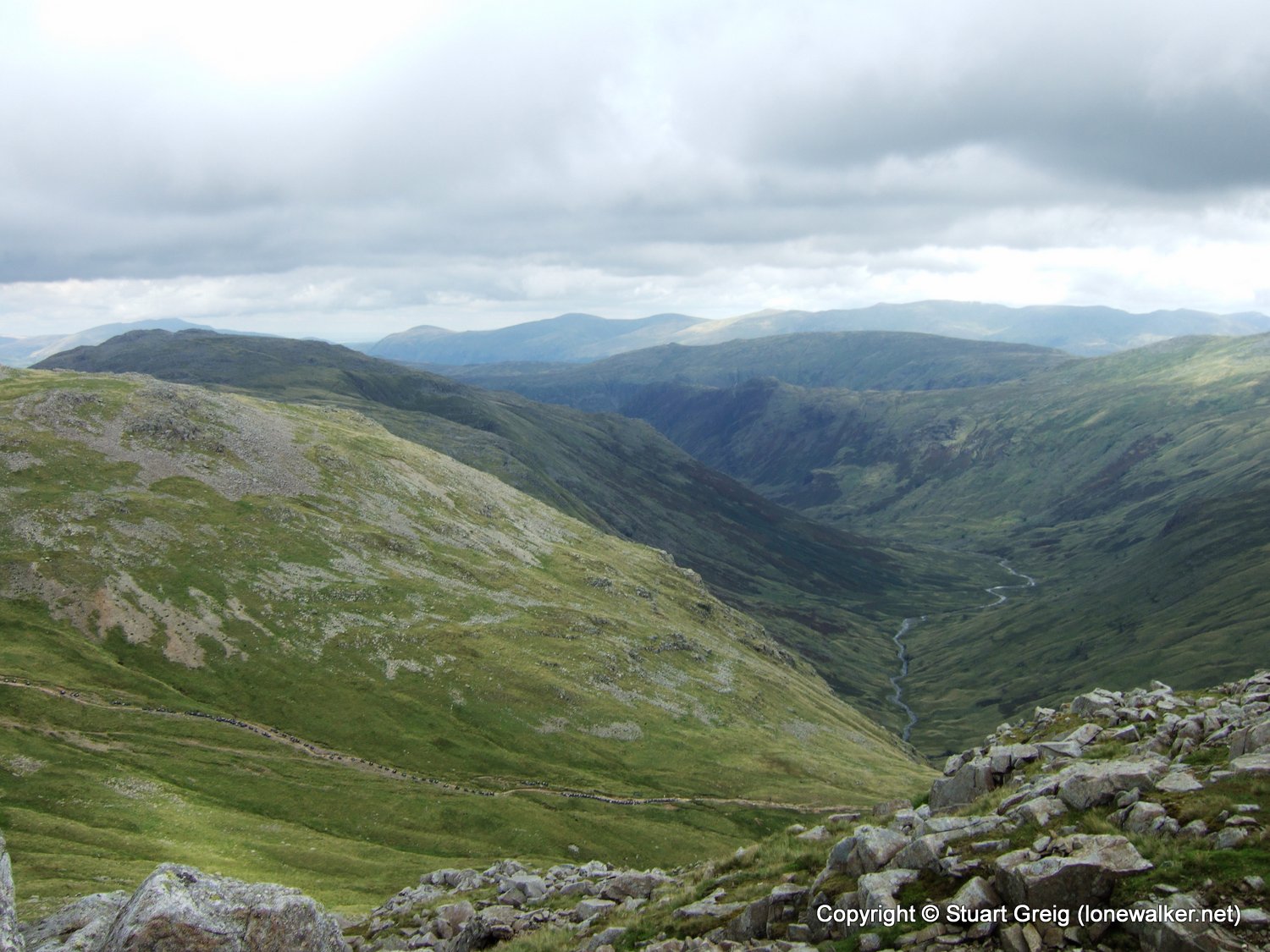 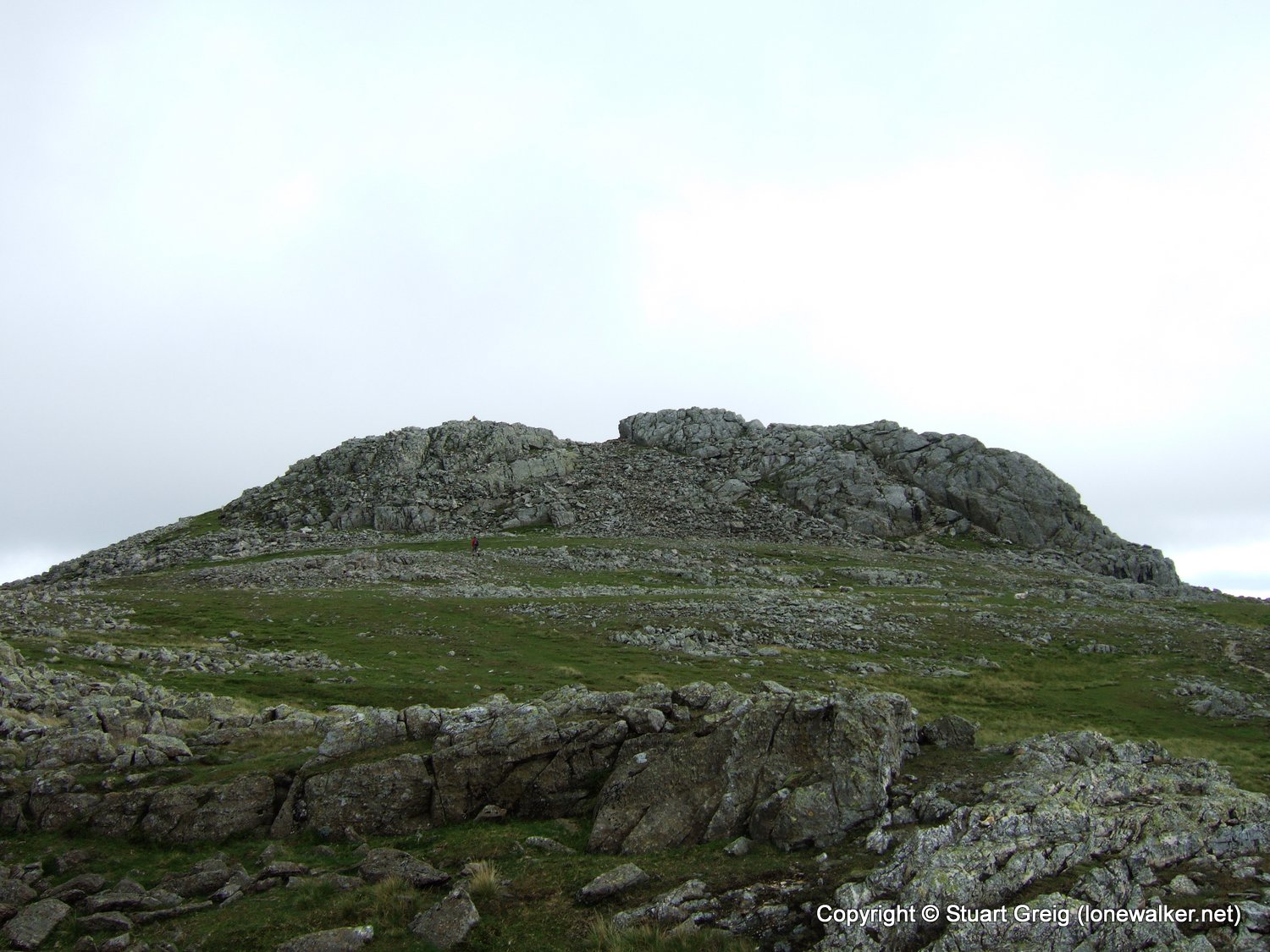 It was cold and quite windy at the top of Esk Pike. We stopped and had some lunch and I changed out of my wet base layer and wet shirt and donned a dry base layer from my pack and put my fleece on over the top of it. This was soon supplemented by hat and gloves as it was quite chilly once you were in the wind. I took a wind reading from the summit and as with previous walks the numbers were less than I had expected; gusts to 25mph. 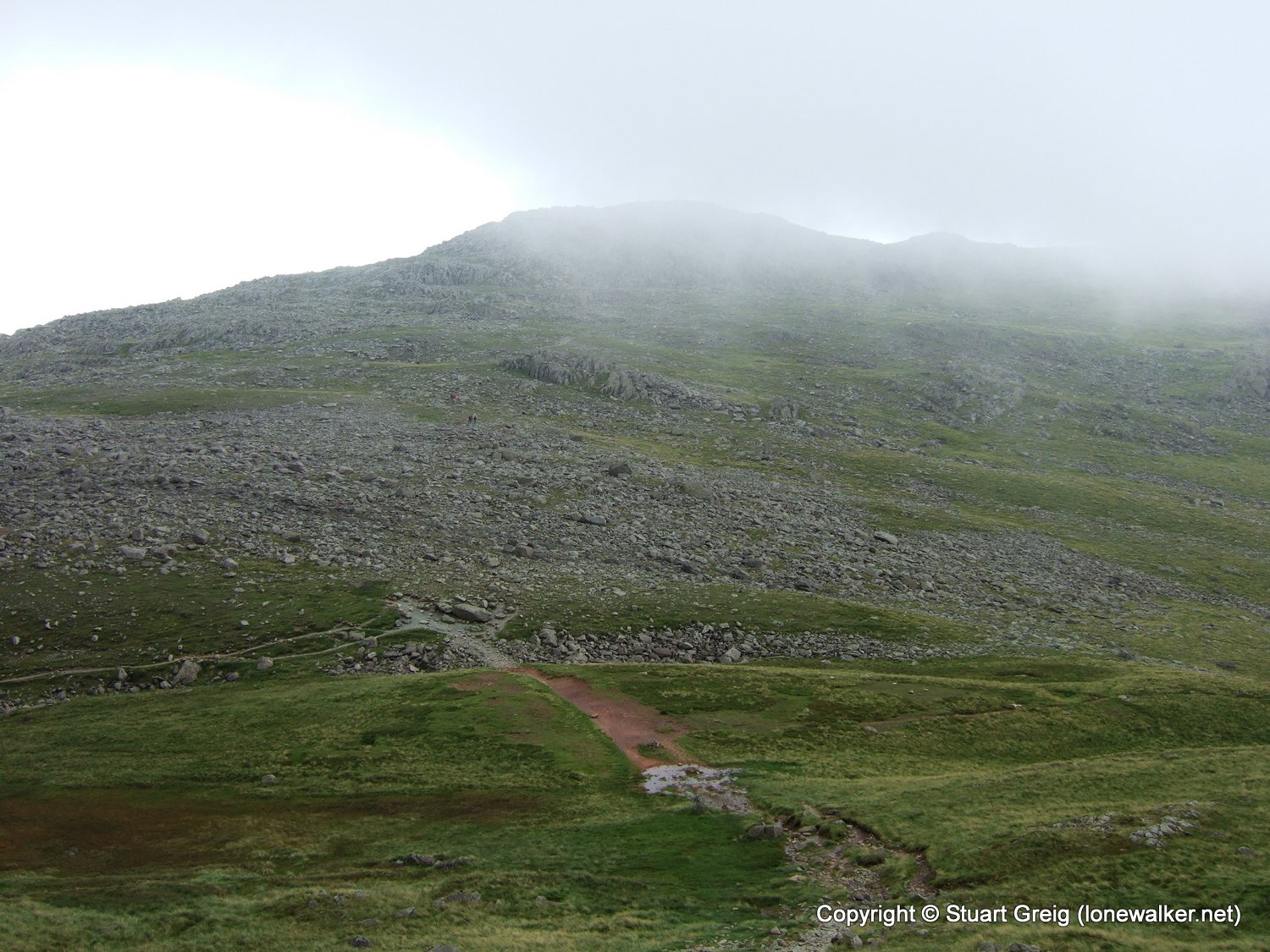 Ore Gap with Bow Fell beyond

From Esk Pike, Bow Fell had been pretty much invisible due to the cloud that had enveloped it. As we descended to Ore Gap the clouds parted though and we could see the path ahead and behind clearly now. 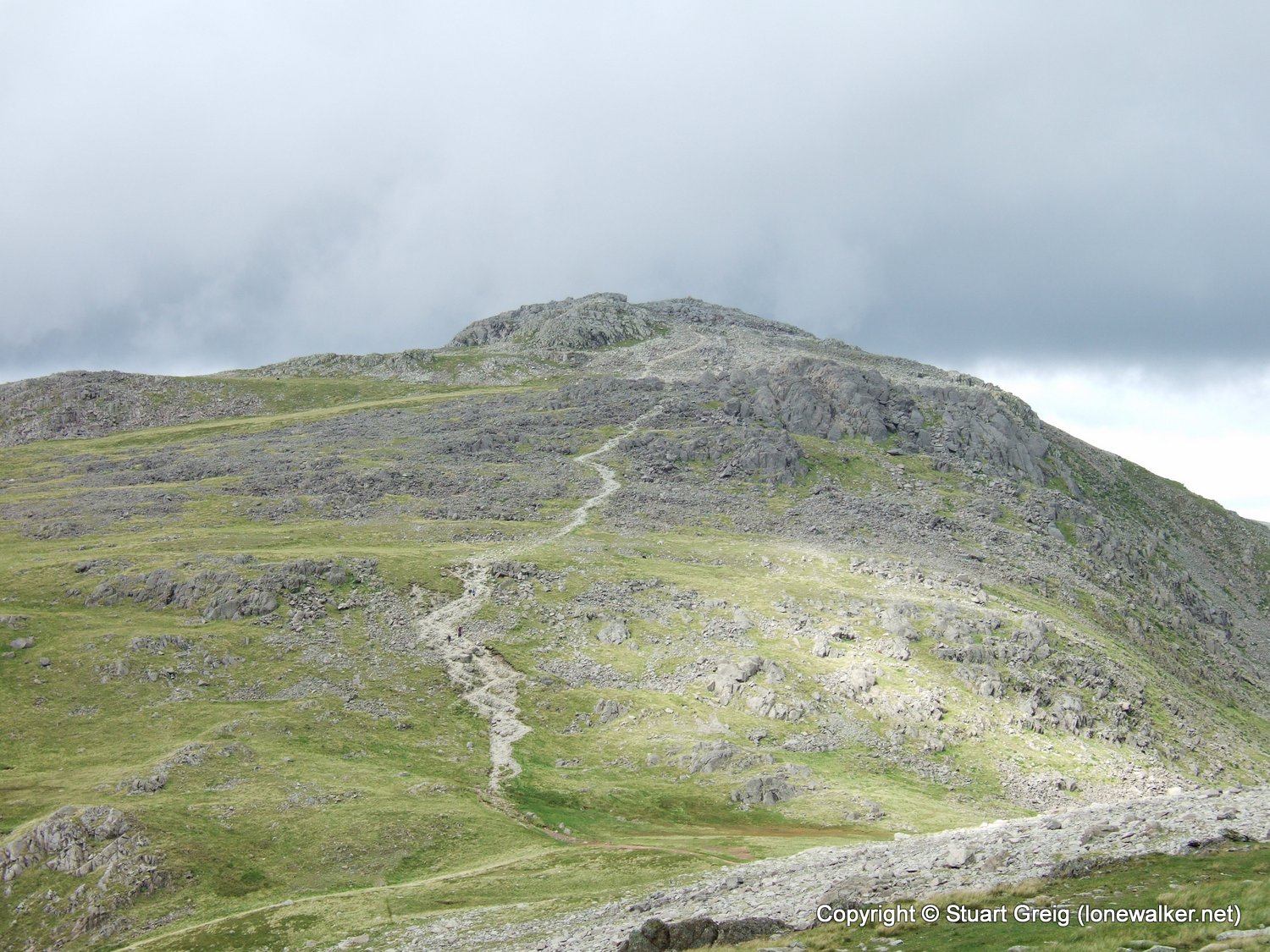 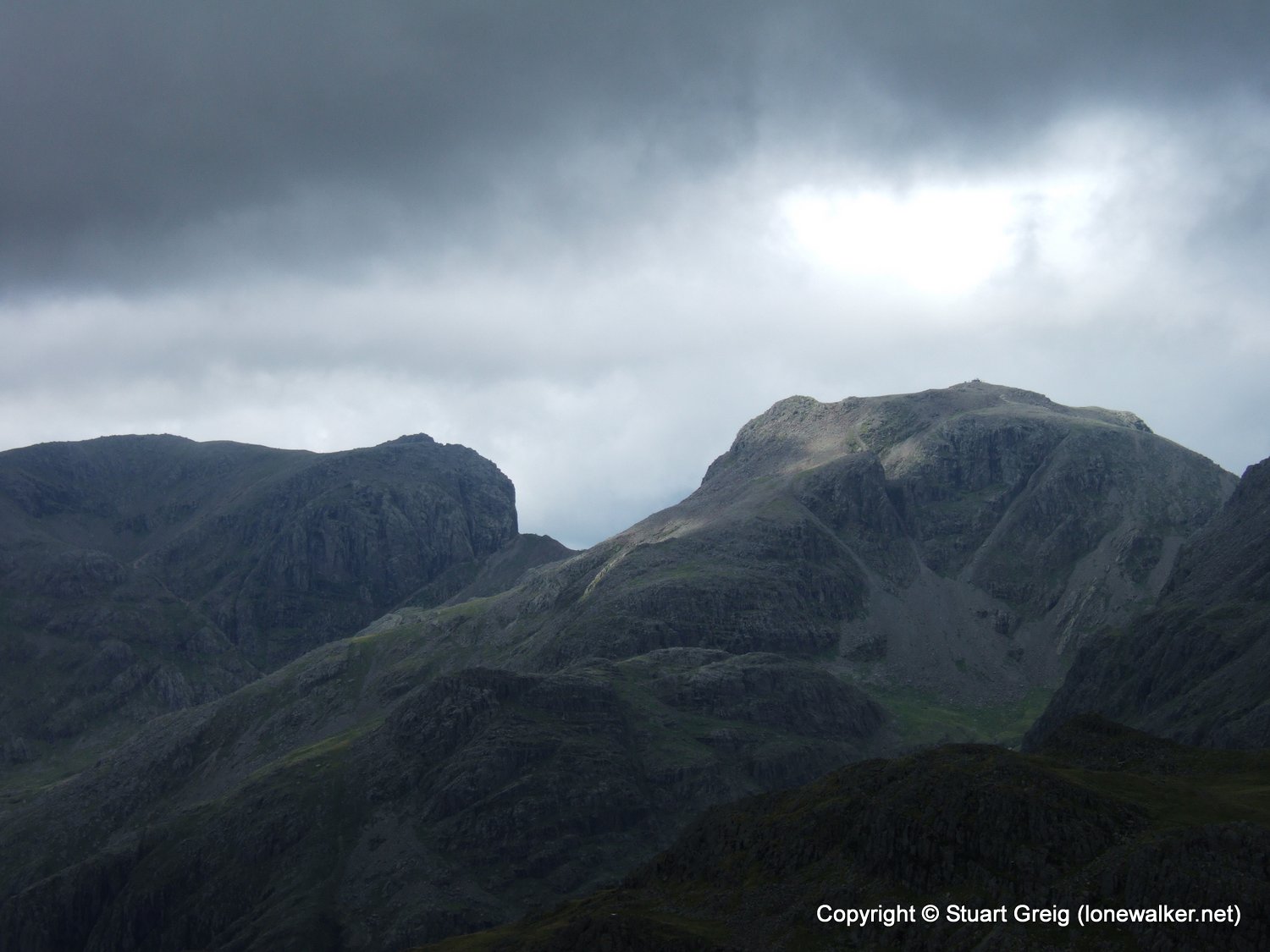 The Scafells clear of cloud now

The Scafells also managed to shed their cloud for a short while and although mostly in shadow, they were a fine sight. 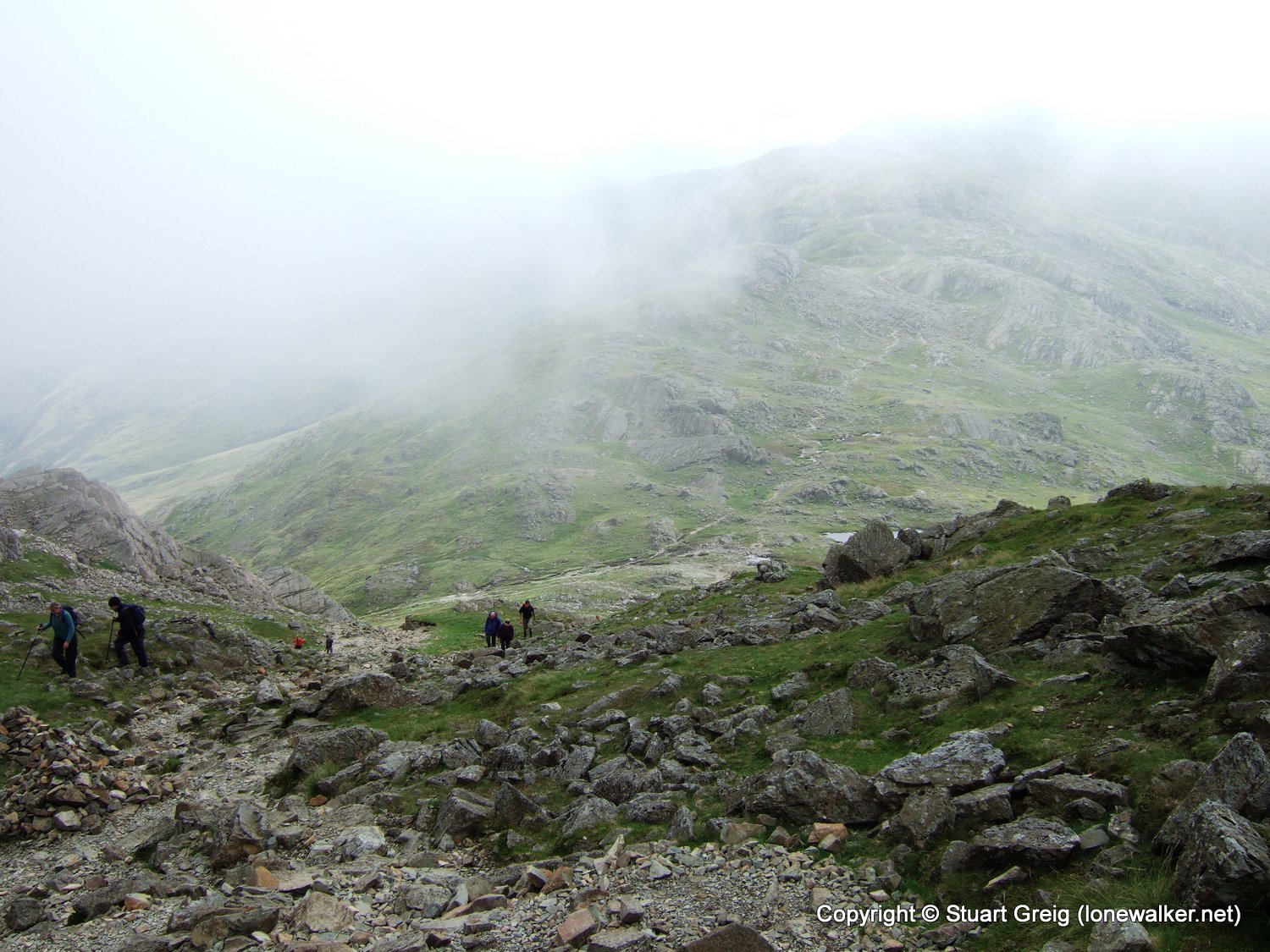 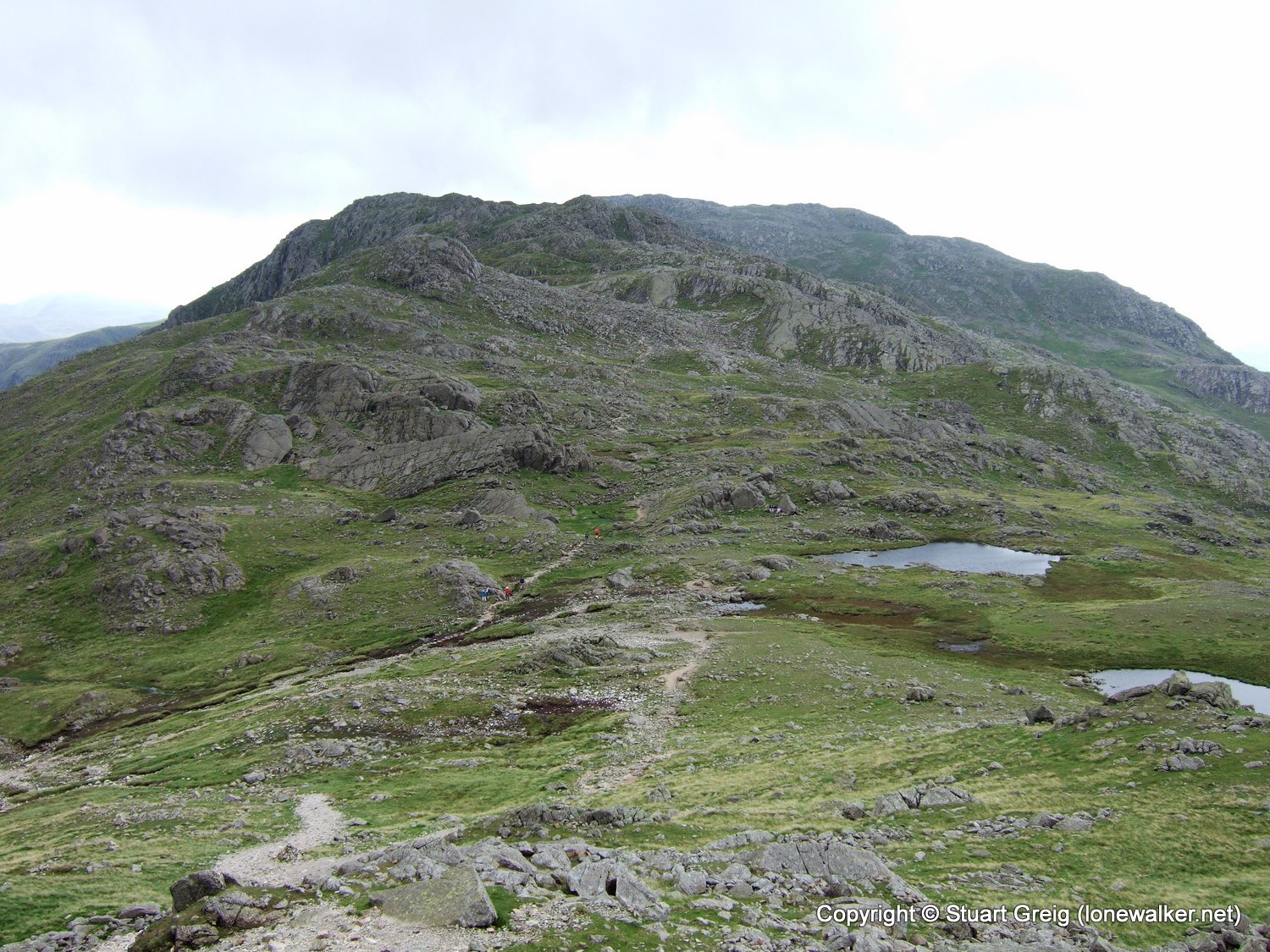 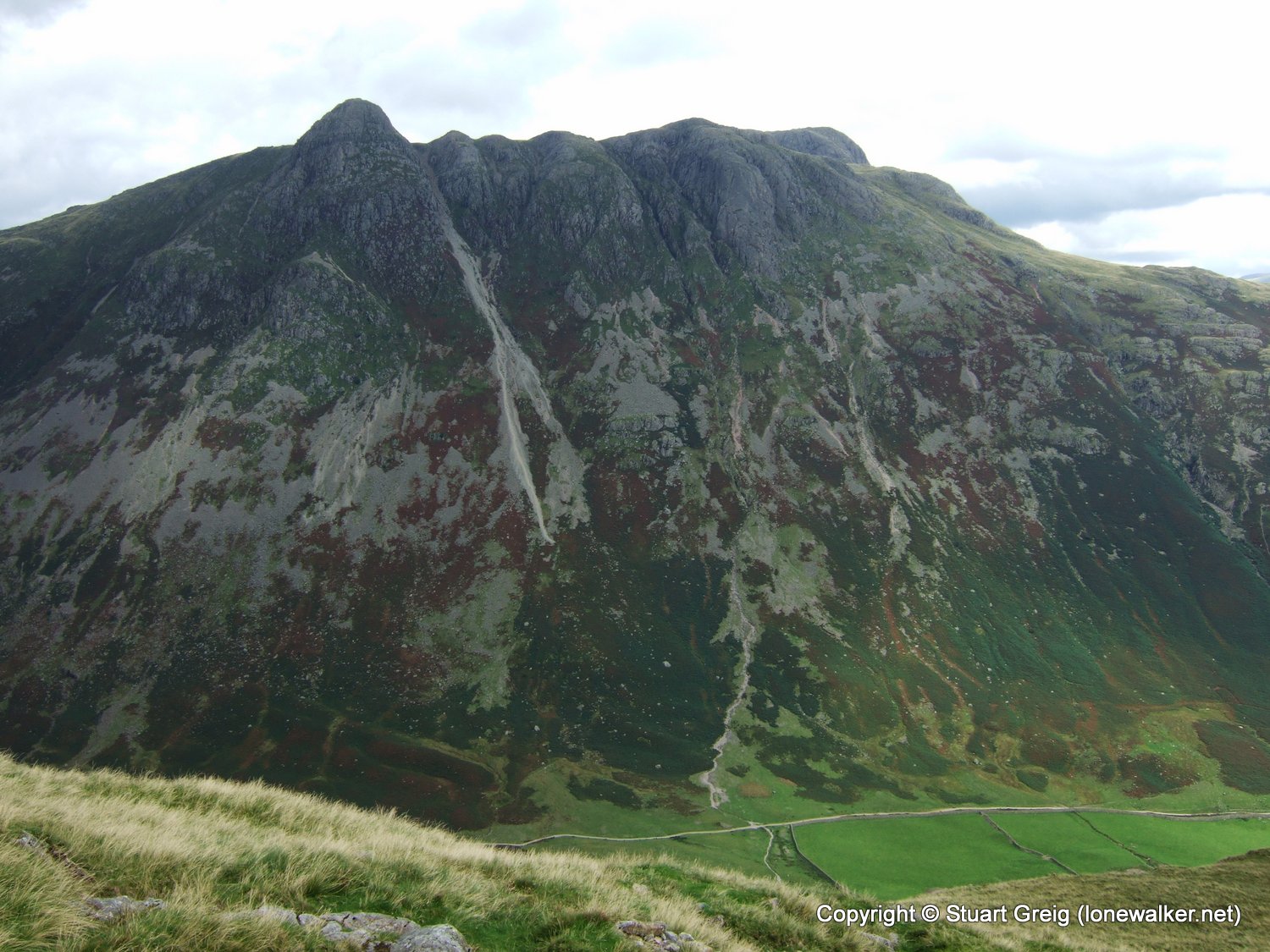 Pike of Stickle and the Langdale Pikes 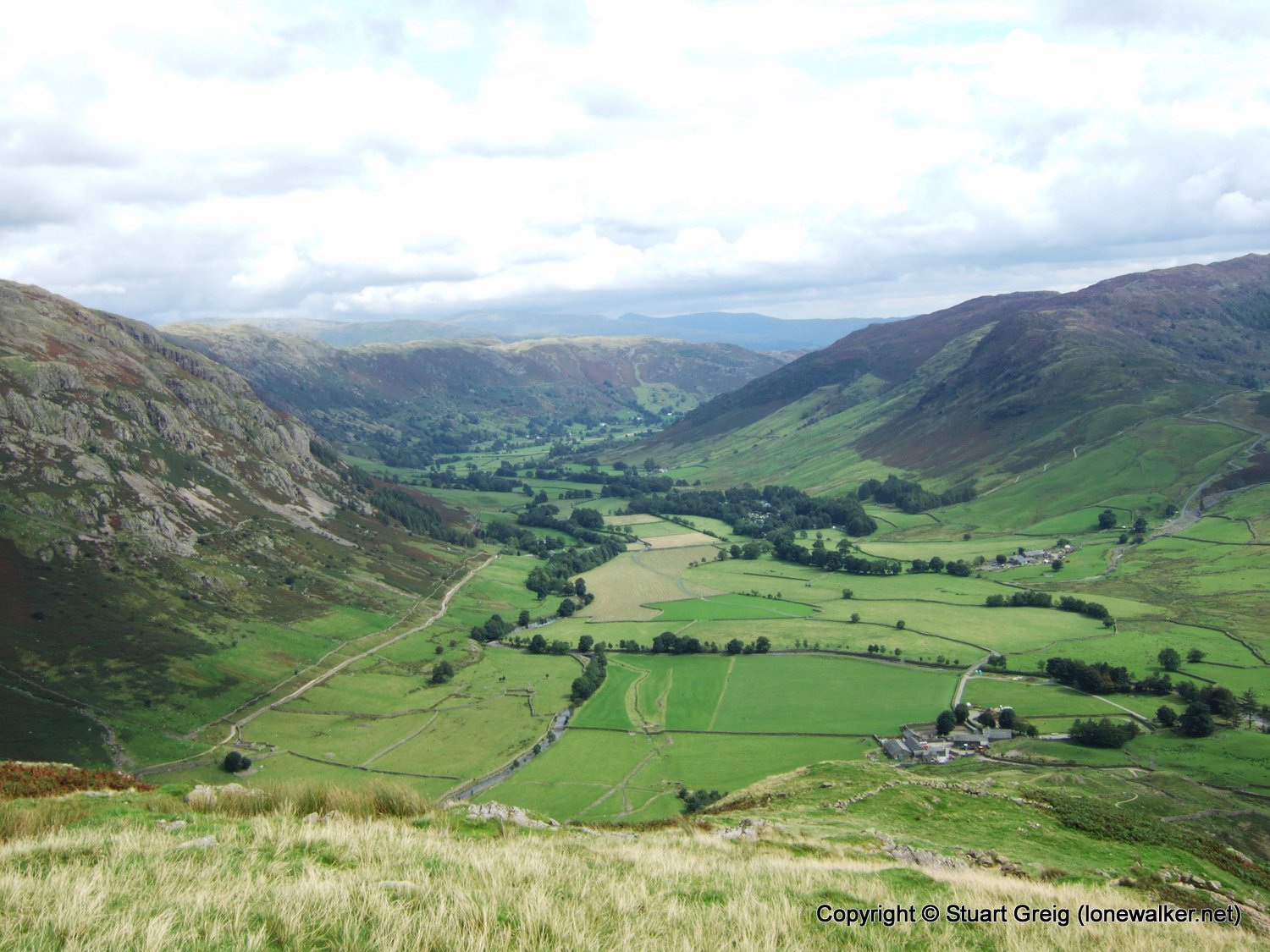 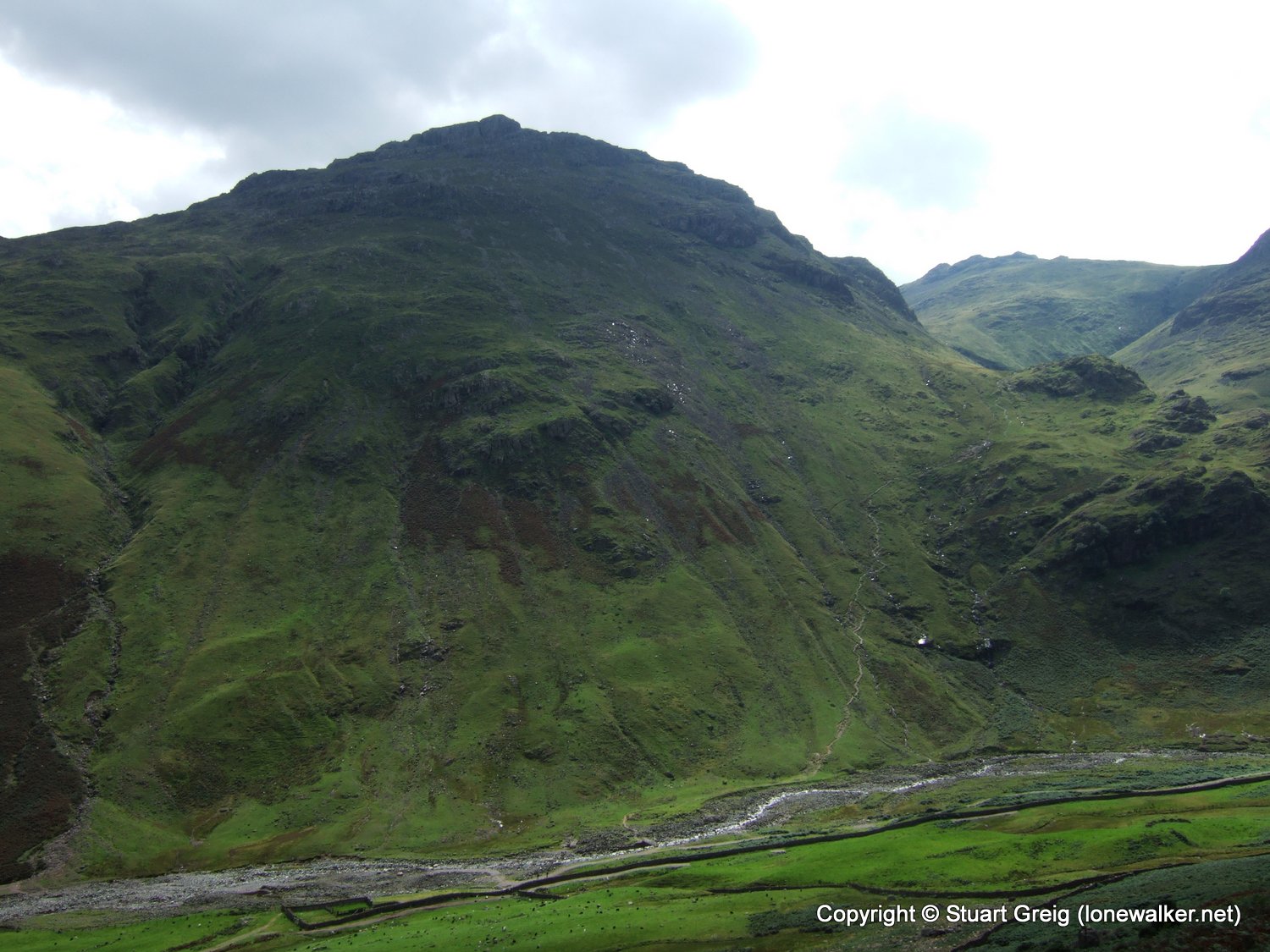 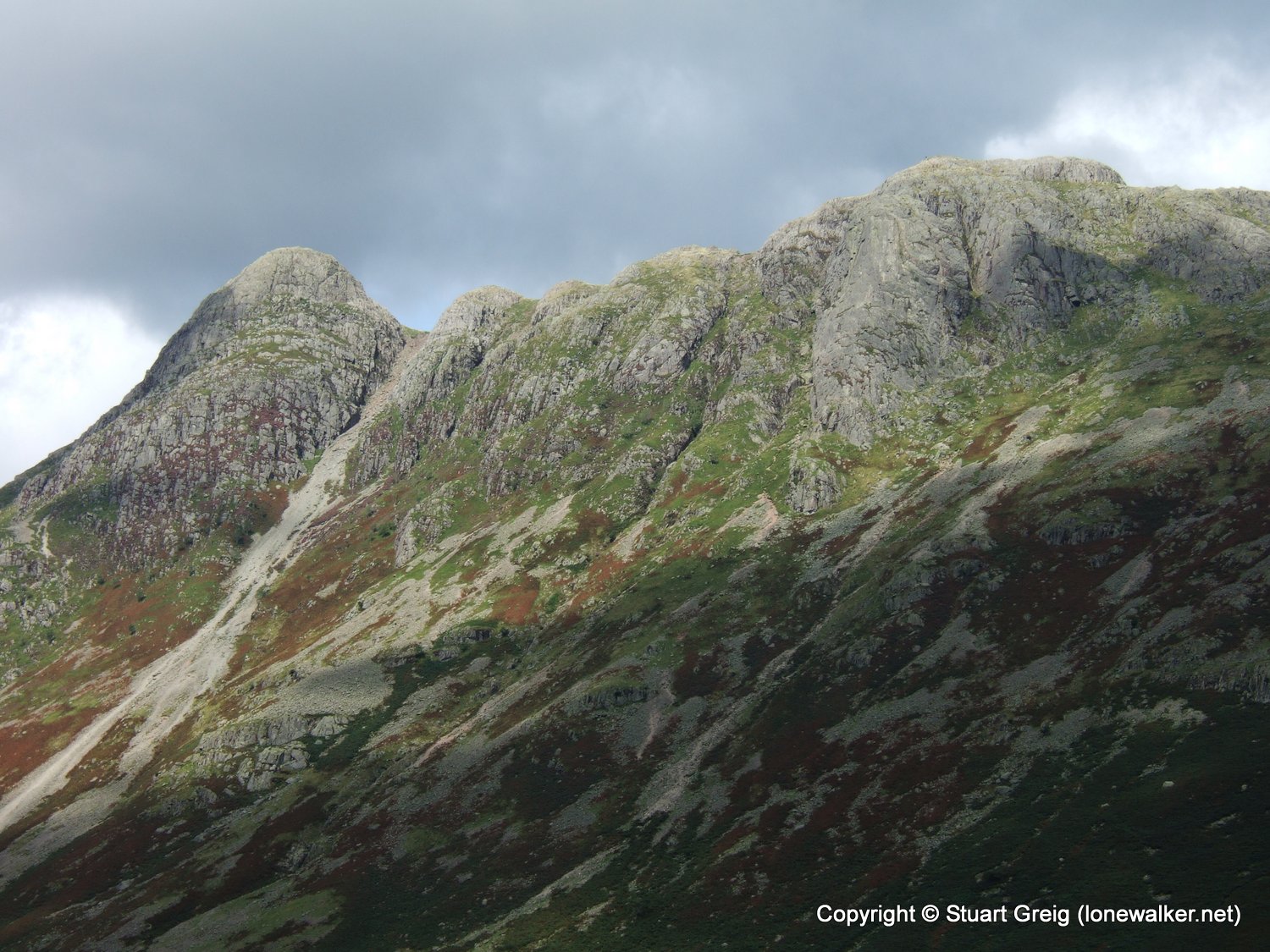 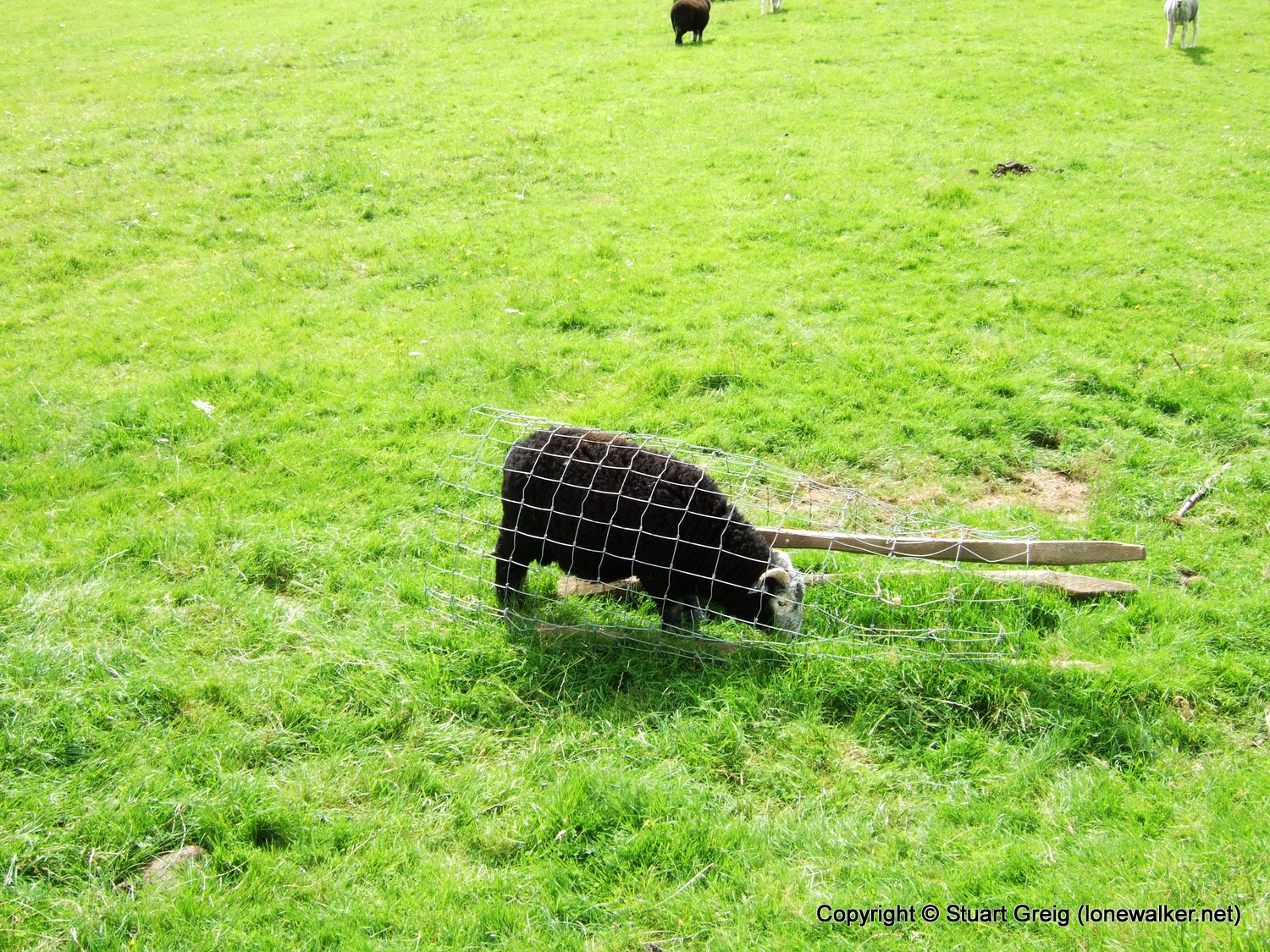 An excellent day’s walking in mostly great weather; it was good to be back in the hills after a few weeks away.