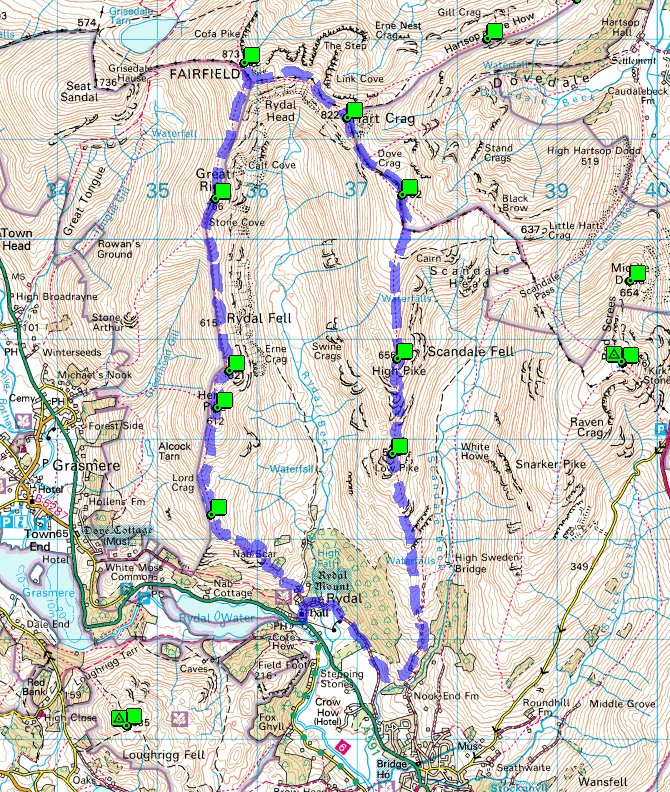 Without doubt, this was the best walk of the year for me and the last of the year too. It had been my intention to do a lot more walking over Christmas, but what with one thing and another, as well as poor weather, it wasn’t until 5th January that I managed to get out again.

Most people will walk this classic horseshoe from Ambleside, but I wanted to cut out a couple of fairly dull miles and also save myself a few quid on the parking charges that you can expect to have to pay in the big Lakeland towns. So I chose Rydal as an alternative starting point and arrived there at about 08:15, just as the dawn was breaking and parked on the road by the church. There are little signs along the road asking you to donate £1 to the church funds if you are parking there, and this I didn’t mind doing at all.

Path through Rydal Park, what a change in weather. Cold, but clear and bright with no wind to speak of. This marks the start of the Fairfield Horseshoe from Rydal, done counter clockwise as recommended by AW.

The fork in the path at High Sweden Coppice, we go left to follow the wall (the purists route).

Sweden Crag. The rock step described by Wainwright is tight against the wall, top left of the picture. As AW said “Just remember to use the right foot to start off with, the right foot in this case being the left”

It was at this point that I realised I was overdressed. The temperature in the valley was much colder than on the hillside here in the sun and I stopped to remove my long-johns and my sweaty t-shirt. I left my thermal vest on with my zip up fleece over it. This was more than adequate until Dove Crag, where I needed to add my coat and hat to cut out the chilling wind. By the time I reached Nab Scar I could have easily managed in a t-shirt alone.

Low Pike with Scandale Head behind

High Pike, the wall easily discerned by the shadow it casts

Heron Pike with the Langdales beyond

Following the wall to Dove Crag. The boggy sections, and there aren’t that many, are all frozen solid.

Rydal Beck glinting in the sunlight

Helvellyn Range from the col between Fairfield and Great Rigg

Helm Crag from the path between Fairfield and Great Rigg

Fairfield and Rydal Valley, comprising the Fairfield Horseshoe. The only shame about this picture, is me – standing in the line of shot – what a muppet!

Footpath leading back to Rydal from Nab Scar

All in all a superb walk, a big walk too for me. Here’s hoping for similar next year.