Download file for GPS
This was the first weekend in a while that Tex had been free for a walk, so we were walking whatever the weather had to offer. It didn’t look too promising, so we decided to head to the Yorkshire hills rather than the Lakes. We hoped that the lower altitudes would give us a better chance of cloud free summits. some hope! 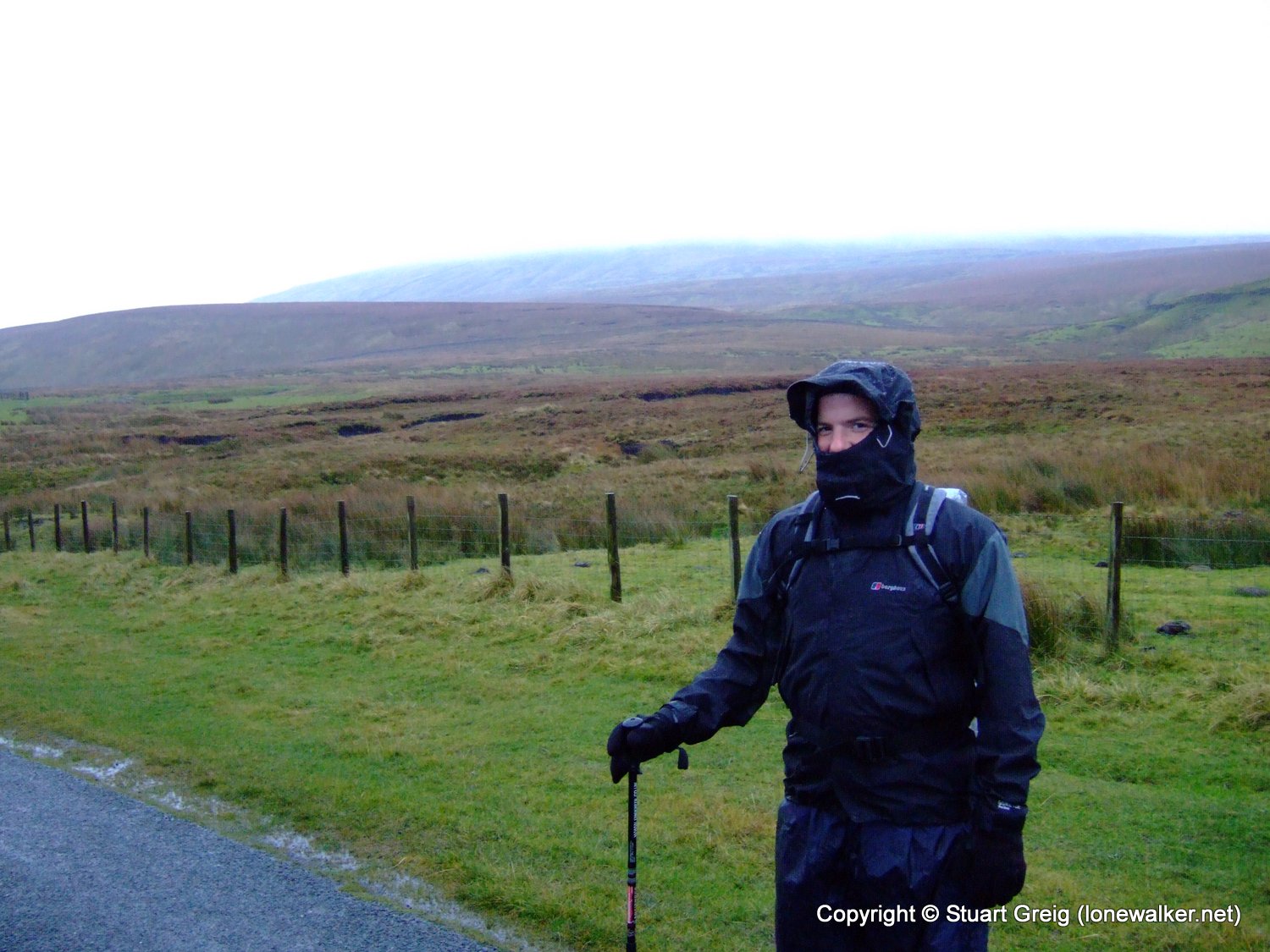 Tex in his new coat – he likes this coat! He’s also wearing what have become known as his “Spinnaker Pants”

We parked beside the road just beyond the cattle grid at SD 84265 71453. There is no car park as such, just a firm verge and an honesty box suggesting 50p for a half day and £1 for the full day. I’m not sure on what grounds the person who placed these boxes is expecting people to pay to park on the side of the road, but I was glad of the space and dutifully paid my £1.

We set off in the rain, in full wet weather gear wondering what the hell we were doing – we could be at home in the warm!

The first section of the walk follows the Pennine Way, along the road and the up the side of Fountains Fell. The mist and cloud obscured any views, but provided enough cover for Tex to perform his now regular Saturday morning walk ritual. 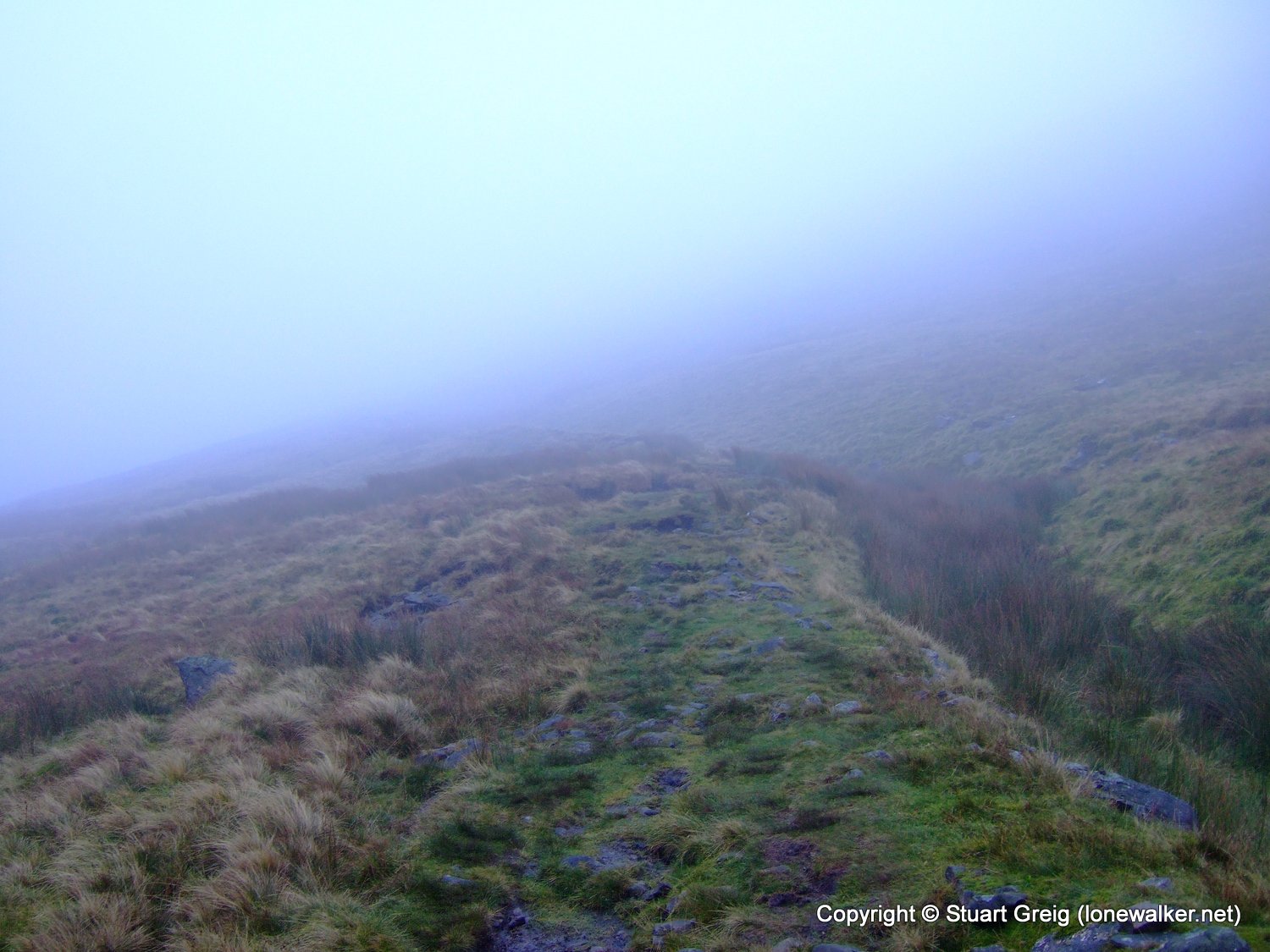 Up into the cloud on the slopes of Fountains Fell 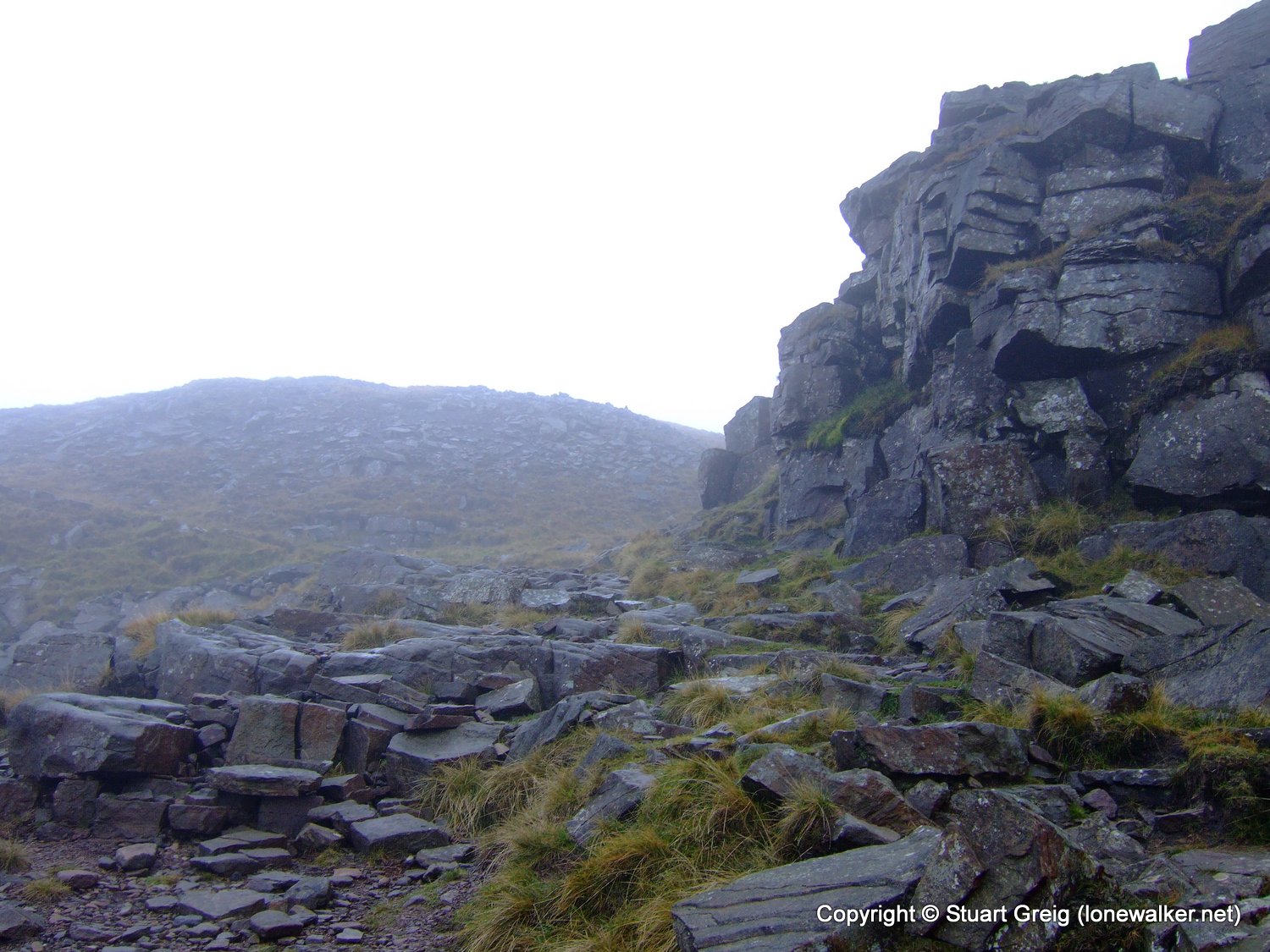 Unnamed crags beside the path 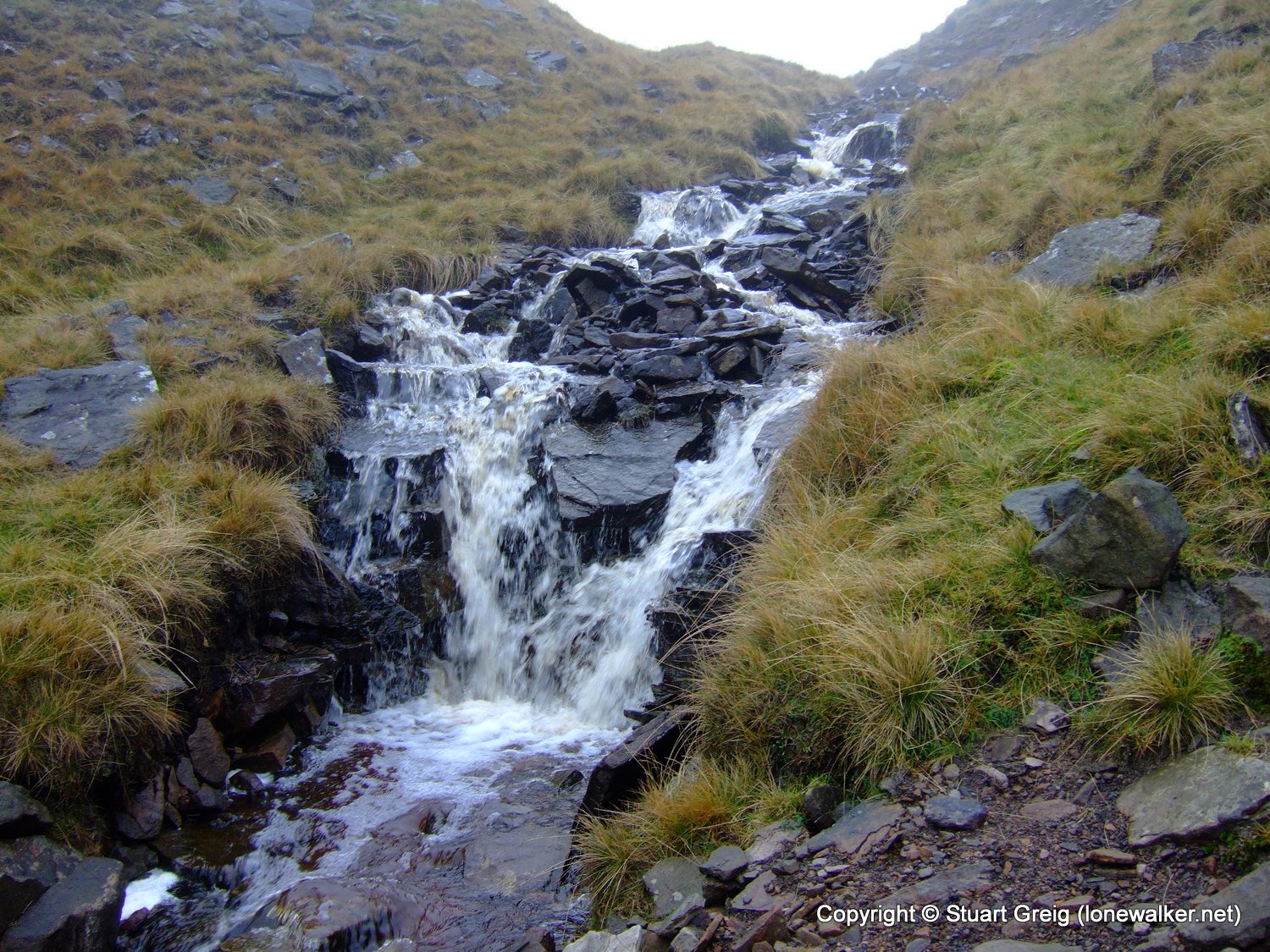 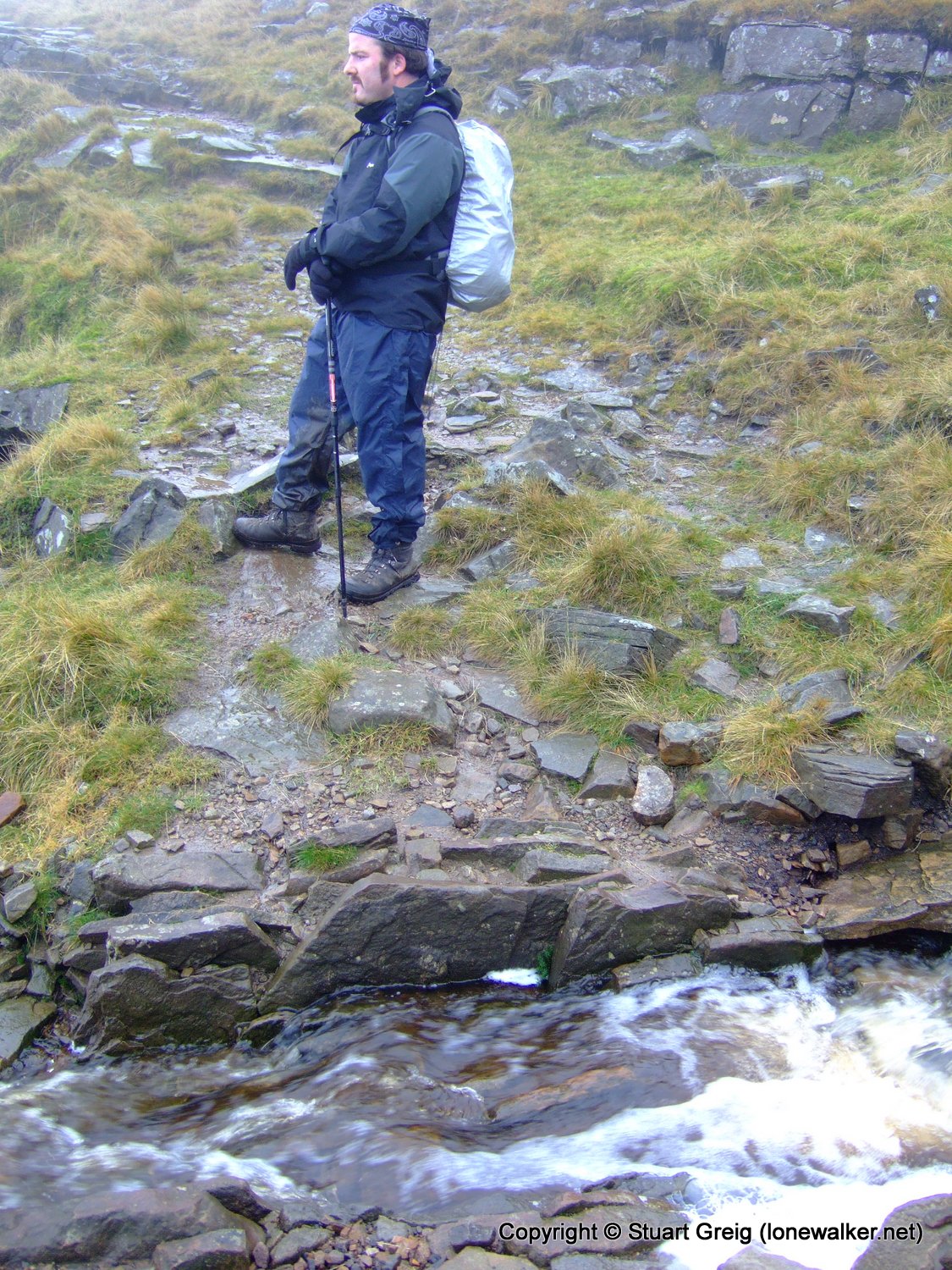 Tex waits patiently for me to take photos

The rain soon let up a bit and although the air was still full of moisture, it wasn’t falling from the sky anymore. The Pennine Way zig-zags for a while before reaching a wall a short distance from the summit of Fountains Fell. 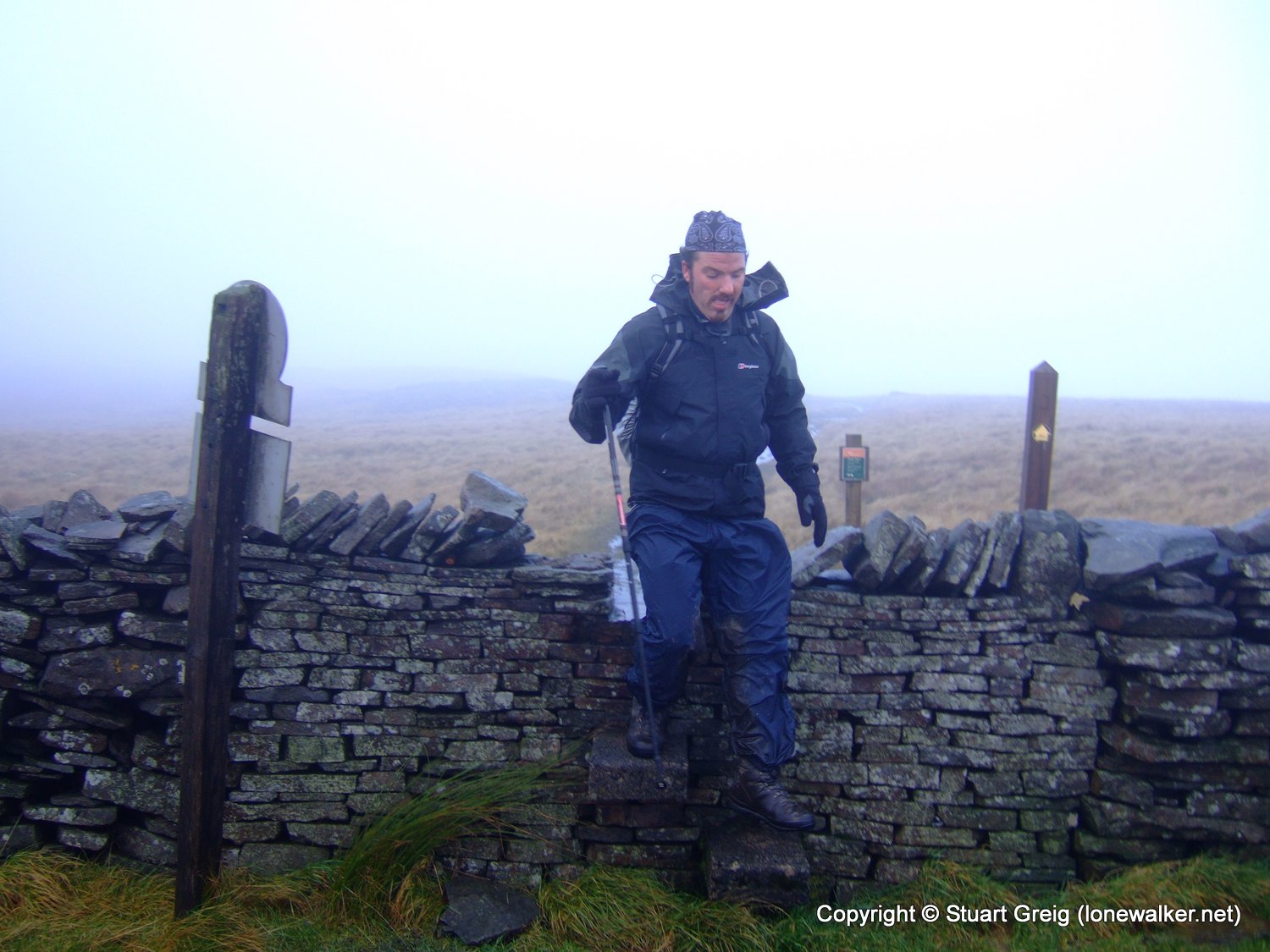 We left the relative firm ground of the Pennine Way and headed south west up the hill to the summit of Fountains Fell. According to my bagging list, at 668m, this is the 20th highest hill in Yorkshire. There is a very faint path that follows the wall all the way to the large cairn at the summit, it is very wet and soggy in places, but generally not too bad. 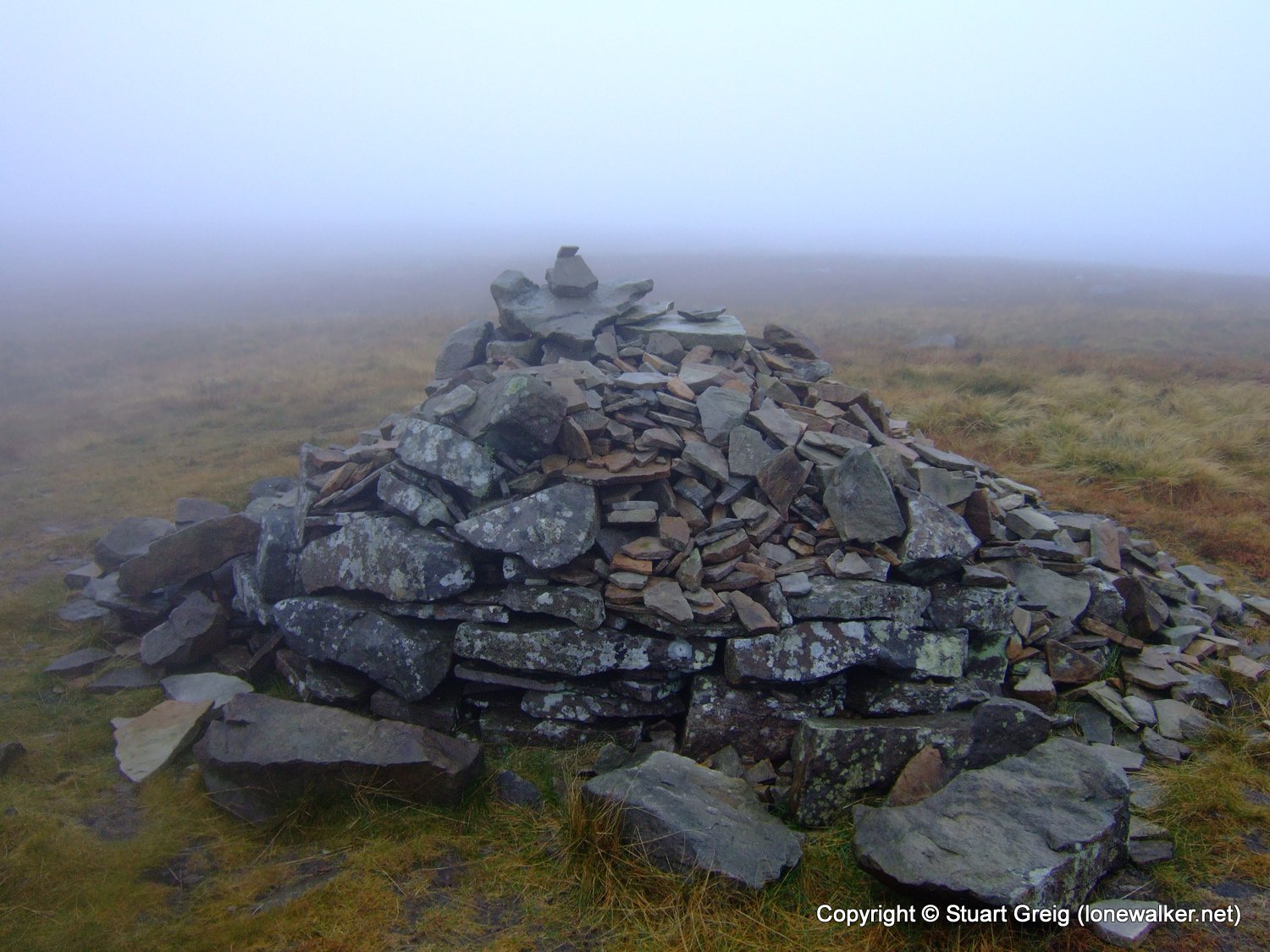 On the way back to the Pennine Way path, we saw a low stone building off the path a short distance and I went over to investigate. It’s not marked on the map and it looks to be in quite a state of disrepair and I have no idea what purpose it served. It is not a mine entrance as the interior has a solid floor, it doesn’t look big enough to shelter more than a couple of sheep and the doorway is too low for easy human access and I’m not sure I’d trust the roof anymore either. Which is probably why it was protected by a fence and a gate. 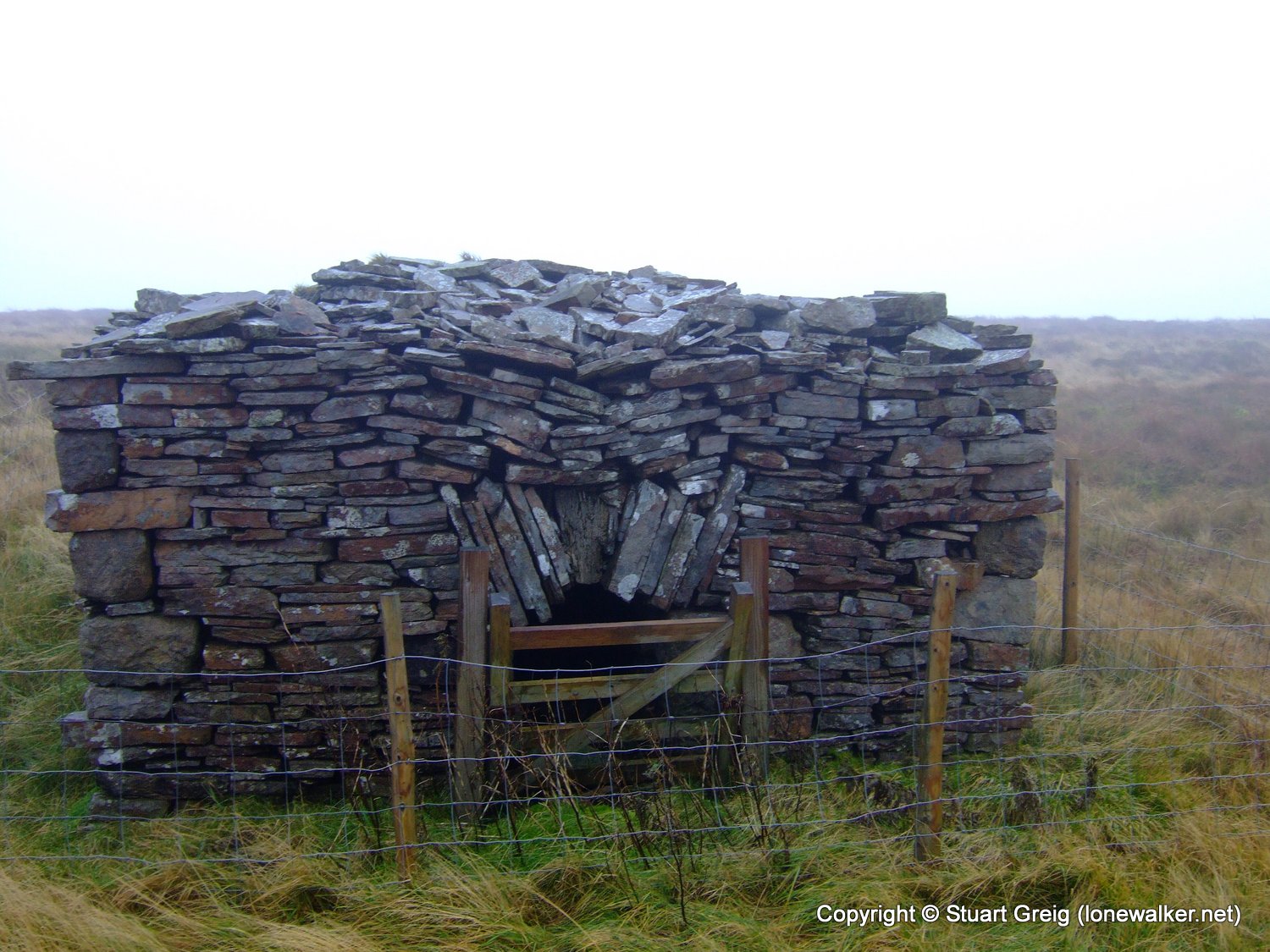 We reached the Pennine Way path again and found the two large cairns that sit beside the path – for no apparent reason. They also seem to be the most precarious cairns I have ever seen, either one of them could be toppled quite easily, especially the smaller one. 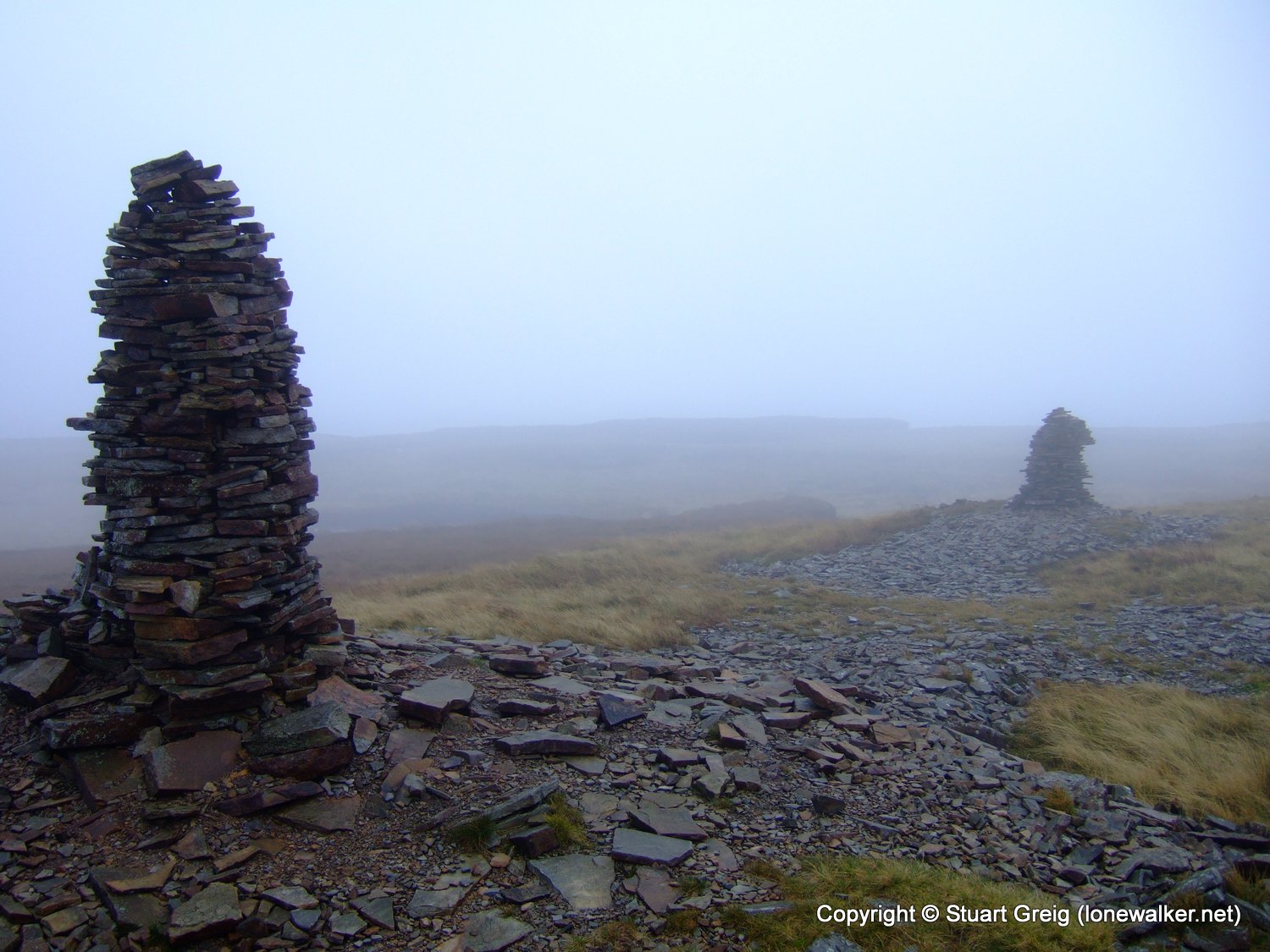 The two cairns beside the Pennine Way on Fountains Fell

We struck out across the moorland from here, leaving the Pennine Way behind and using the wall as a handrail in the mist. Another faint path has been worn beside the wall, very faint indeed and very boggy in places. The place was incredibly quiet though, we’d not seen another soul all day, only the occasional cackle of a grouse frightened into flight from its refuge in the heather.

We really were off the beaten track here. Despite the Open Access designation of the moor, there are no stiles across the walls and we had to make several ungainly wall crossings at various points. The walls for the main part were very solid though and we were also able to make use of gates in the walls. 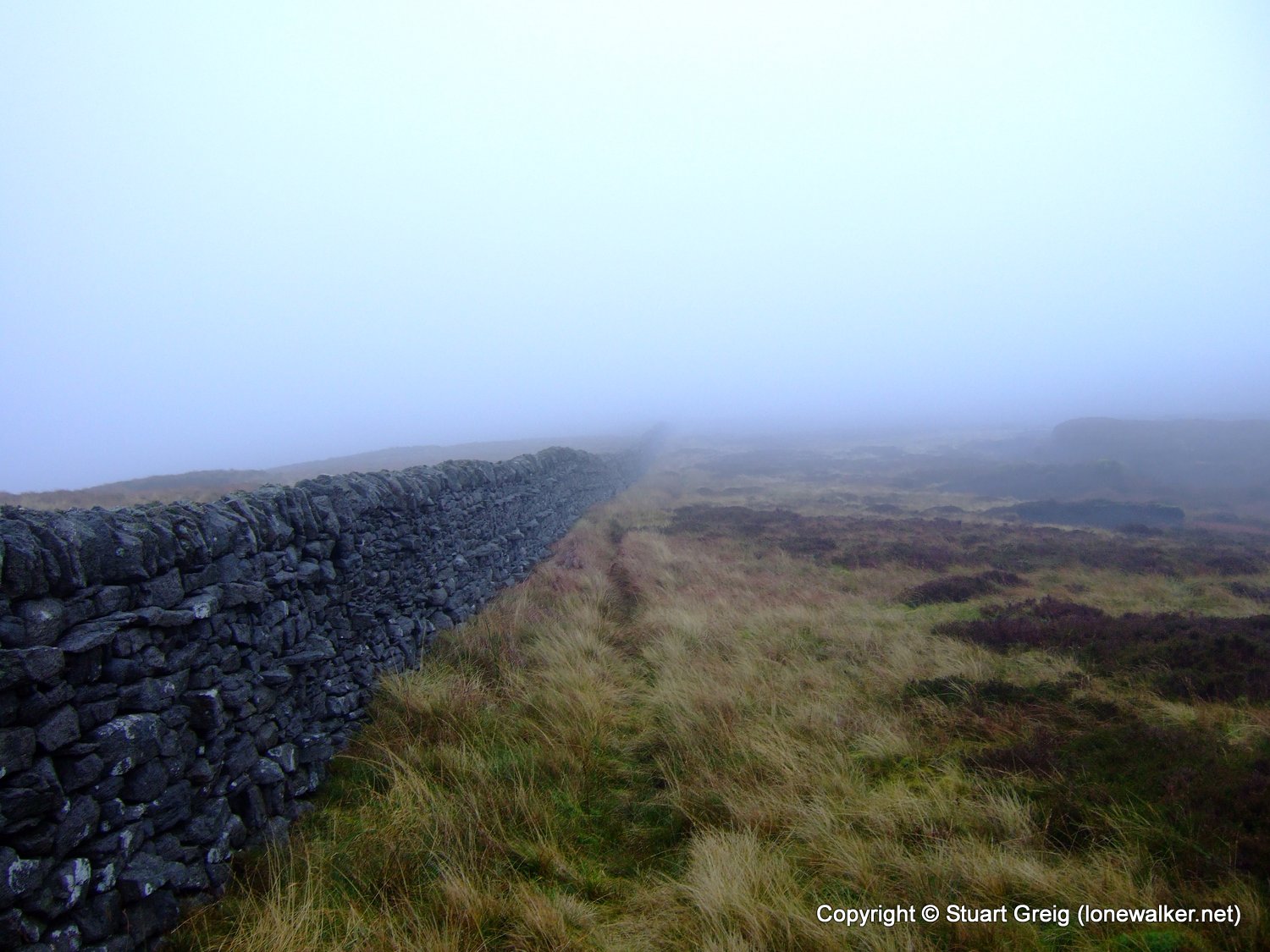 Following the wall across Darnbrook Fell

The trickiest wall crossing was at the foot of Darnbrook Fell. The farmer had topped the wall with a high wire fence, the final strand being barbed wire. The wall was very unstable and the wire very high. Not a great combination for crossing at any time, but with waterproof trousers its a nightmare. we both made it over though, without damaging the wall – which was more by good fortune than anything else. Surely if landowners know walkers will be crossing these walls, it’s in their own interest to make it as easy as possible? In other areas I have seen makeshift ladders placed against the walls to make crossing easier – a cheap and effective method.

The rain had started again as we crossed the fell and Tex took shelter beside the wall, while I followed the wall to the summit of Darnbrook Fell. This fell is the 27th highest in Yorkshire at 624m and it also has a trig point on it, so I wasn’t going to miss it.

Again, there is a faint path beside the wall for part of the distance to the summit, but this didn’t prevent me from stepping calf deep into a pool of water covered in
moss and then grabbing the top wire of the fence to stabilise myself and puncturing my palm with a barb. Double Bollocks! 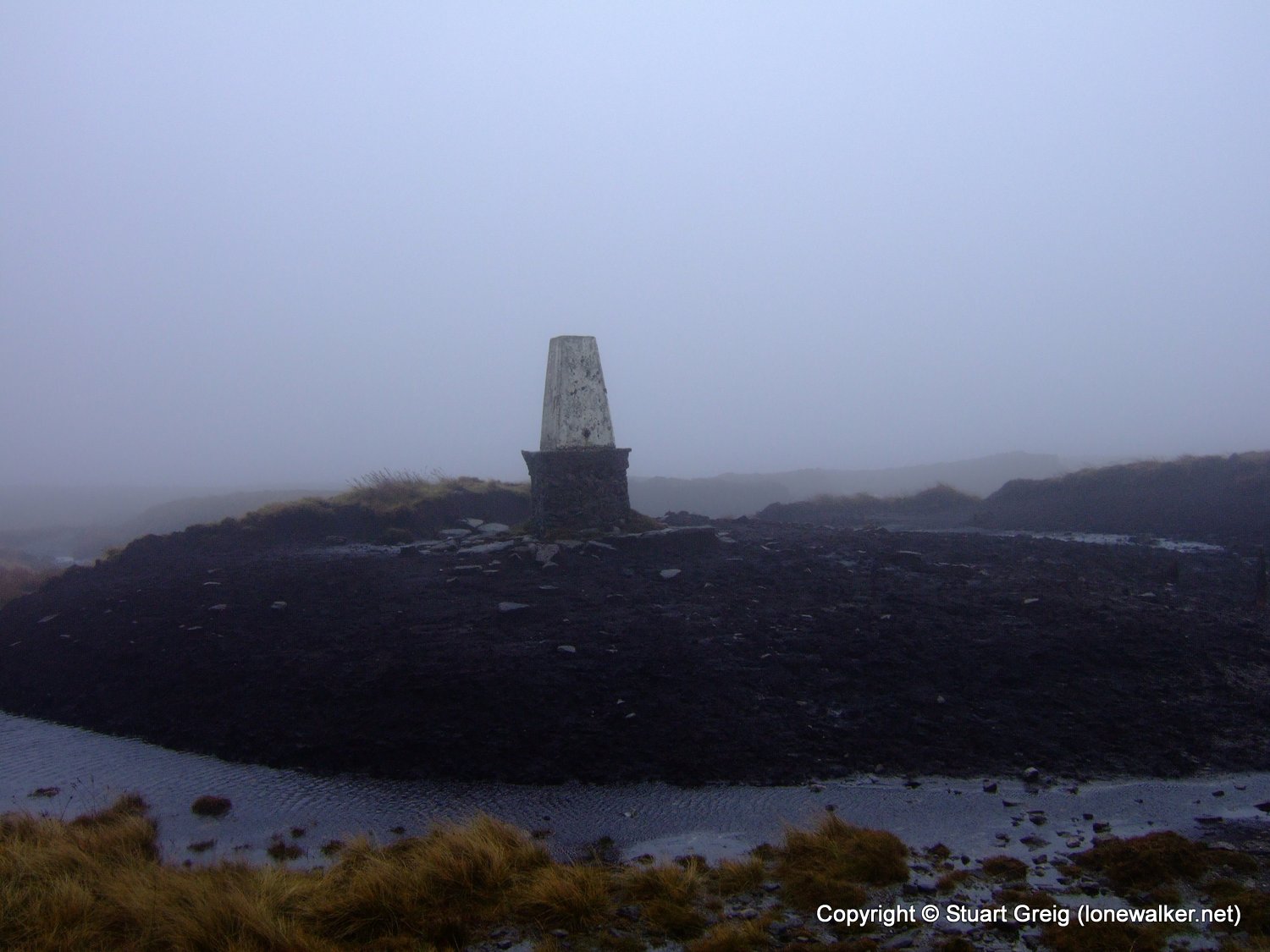 The trig point on Darnbrook Fell is remarkable. It stands on a metre high plinth of concrete that has slowly been revealed as the peat has eroded away over the past few years. It looks like the tide has gone out.

I paid my respects to the trig and then returned to Tex in his shelter by the wall. Together we followed the wall down the hillside, out of the cloud and back the green of the valley below. 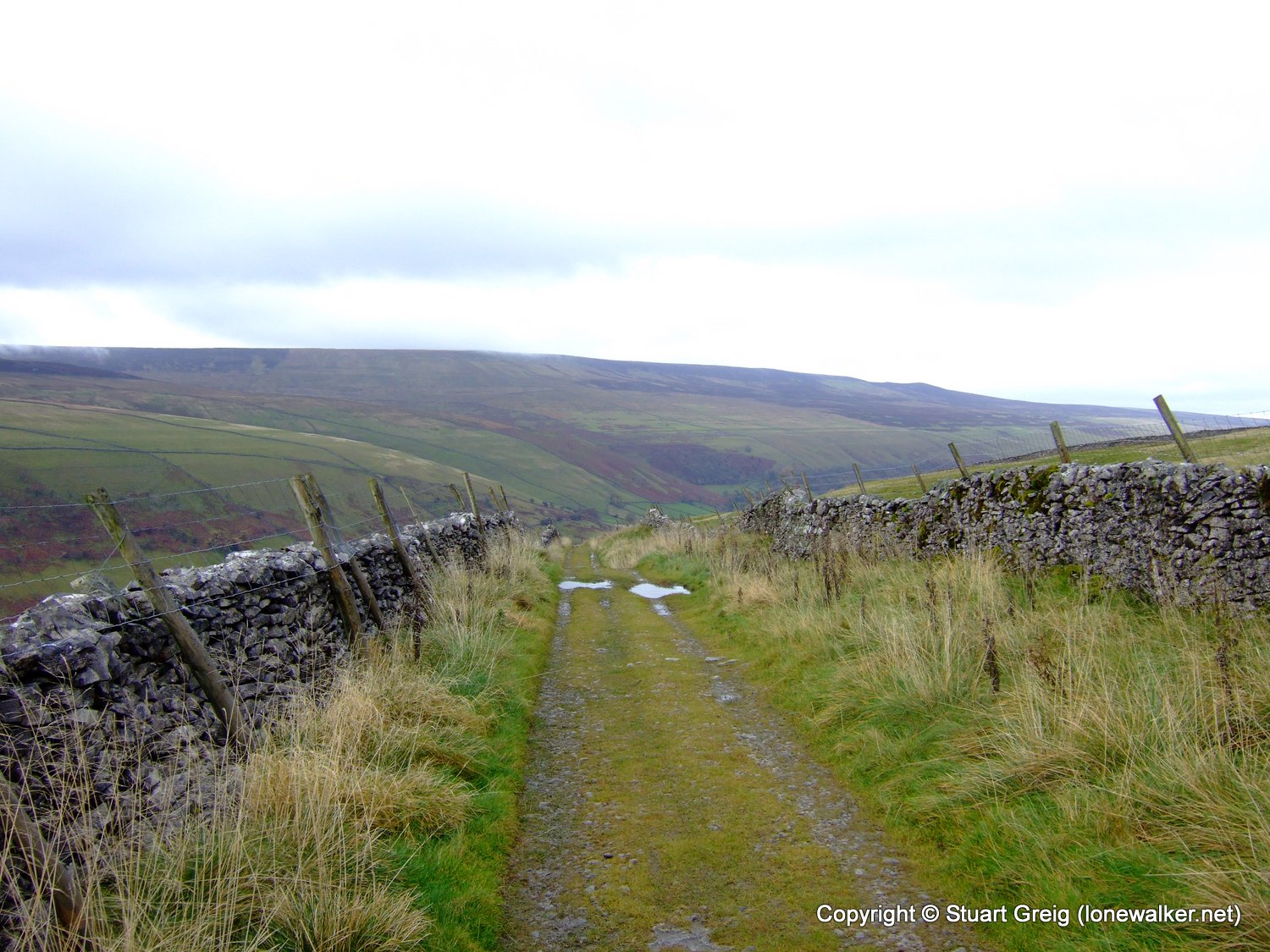 Farm access road that leads down to the River Skirfare

Once out of the cloud we were able to remove a layer of clothing; it was warmer and the rain had stopped again – at least for a while. 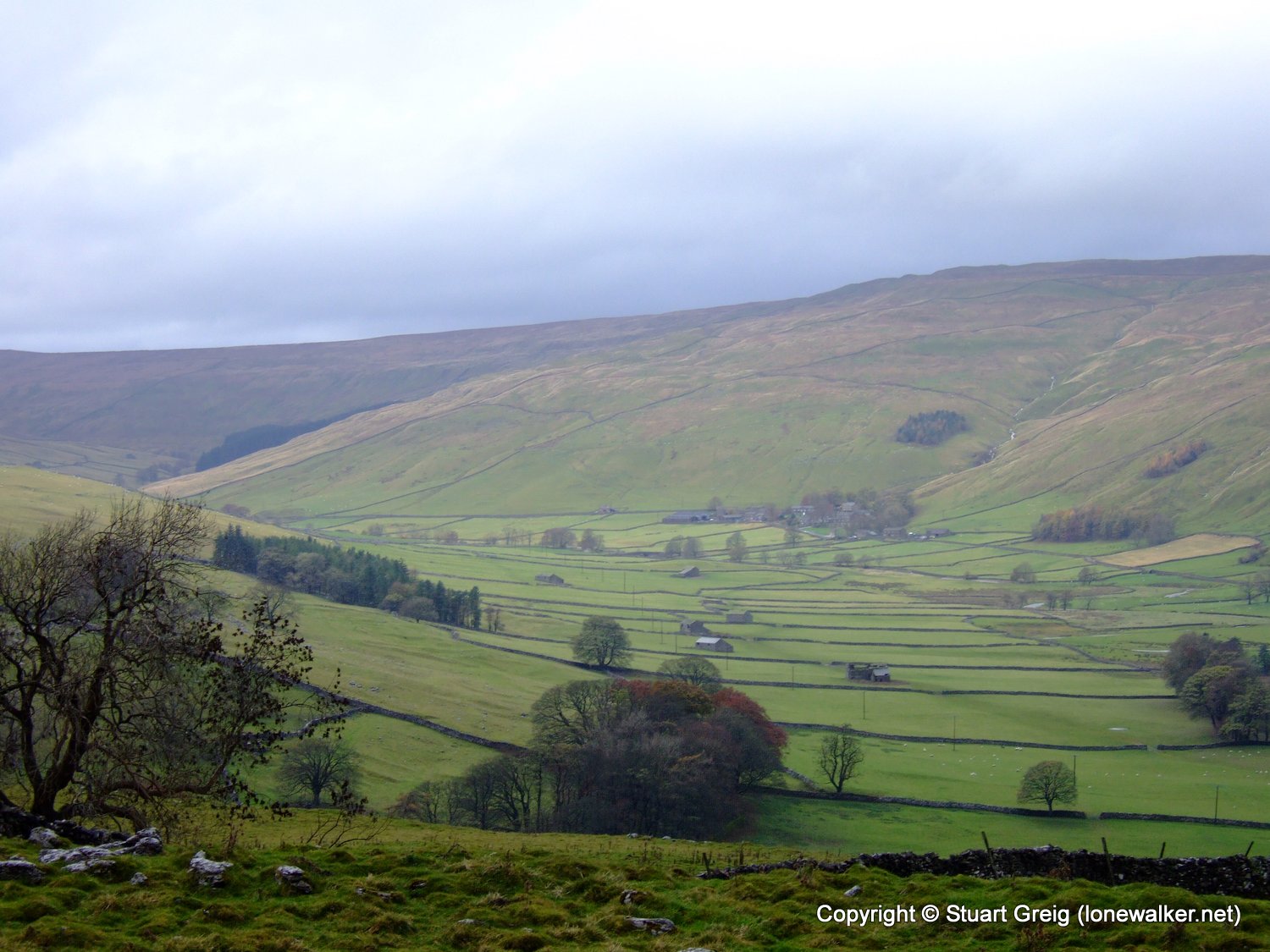 Littondale – one of the less well known Yorkshire Dales

We crossed fields and pastures, through mud and puddles and across a narrow bridge at Nether Hesleden, where we got a little confused. The owner(s) of the buildings here have not been all that helpful with regards to the placing of footpath signs. We ummed and ahhed for a while and consulted maps and GPS, before we decided the path must run down the side of the house. In fact it runs almost beside the back door of the largest property – no wonder they want to keep that quiet.

The path then headed back uphill for a while. An often steep, always muddy farm track that finally brought us to the firmer footing of the narrow country lane. The rain was battering down again now and we decided to stick to the road, rather than slide and skid along the footpath that we had selected for the return to the car. This did mean we ended up yomping the last three or four miles back to the car but at least we mostly kept our feet dry.

We saw a couple of walkers ahead of us on the road and this encouraged Tex to blast the last mile or two back to the car in a attempt to overhaul them. We did manage this, but I’m not sure why? I let Tex plough on ahead, happy to maintain my steady pace rather than try to keep up with him. 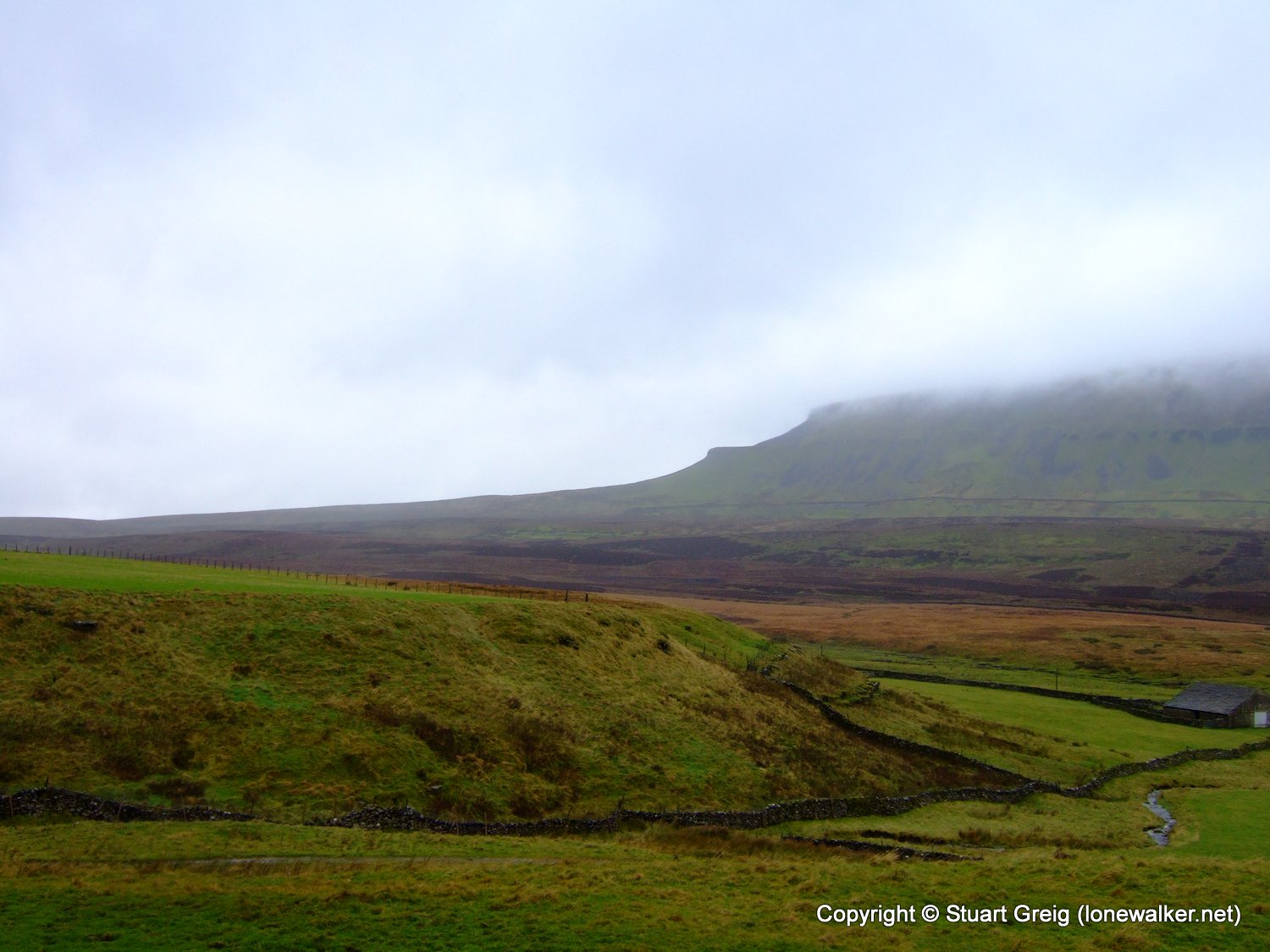 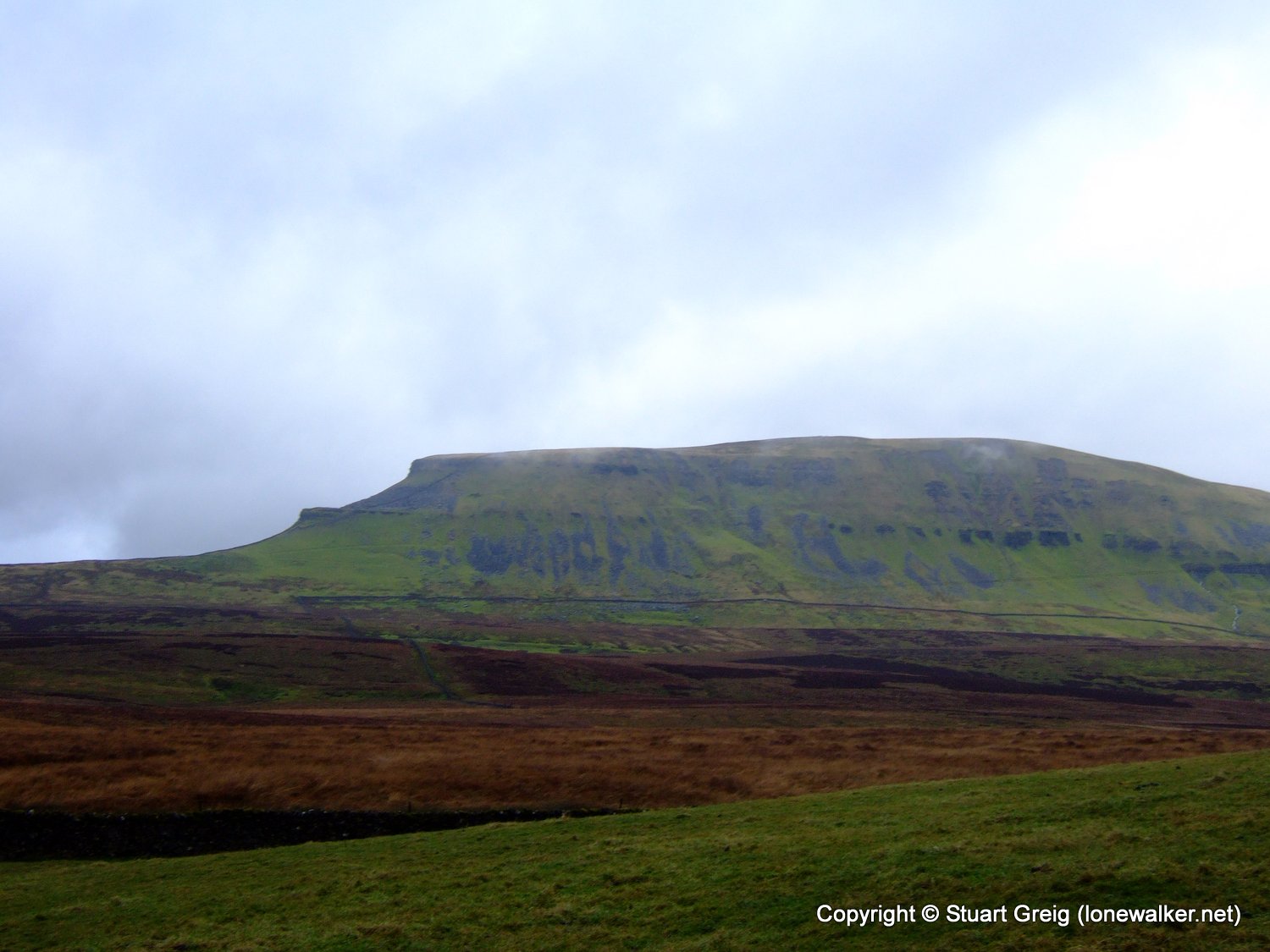 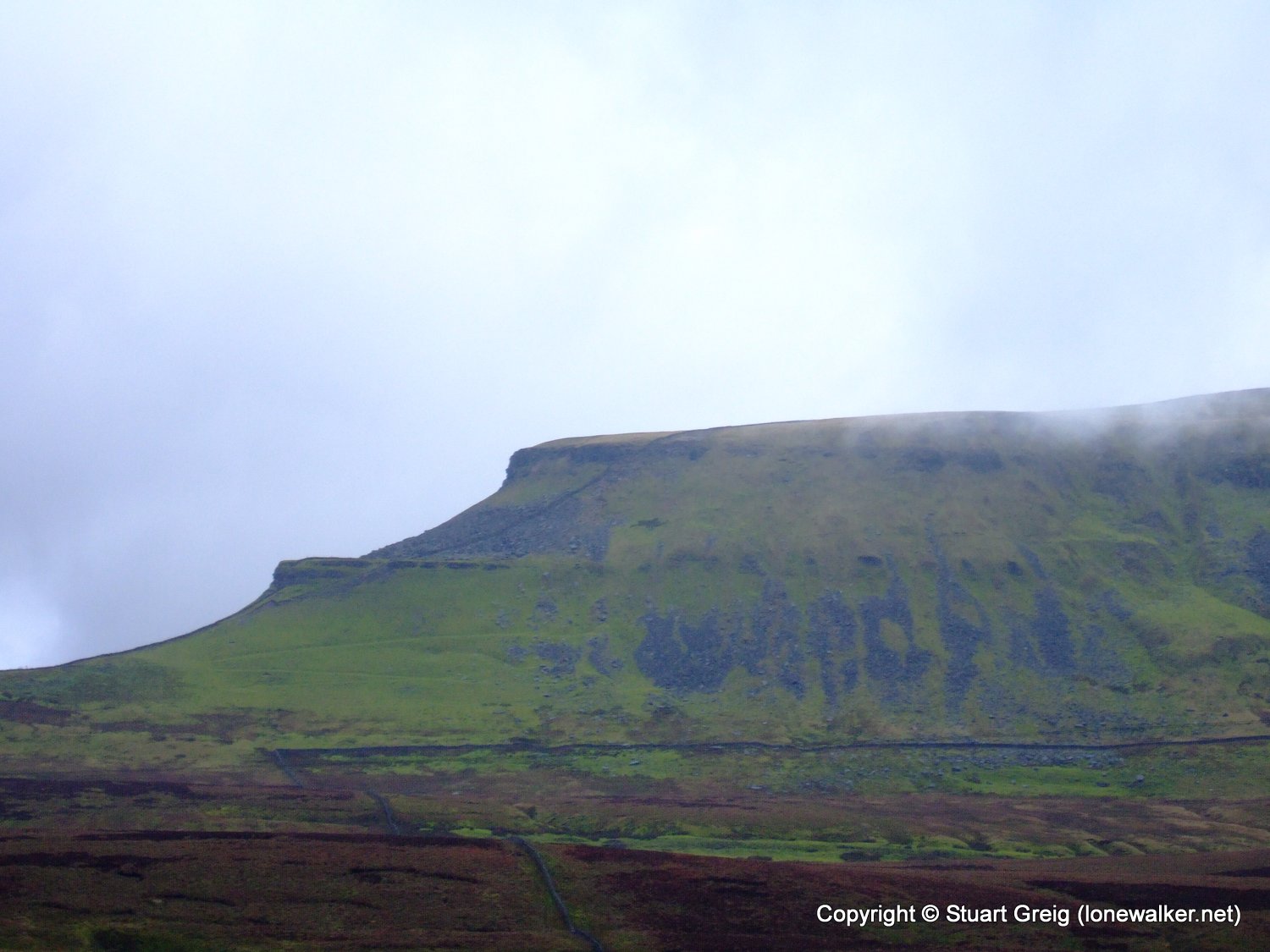 As we got closer to the car, the weather improved enough for Pen-y-Ghent to be revealed – at various points in the walk I’d pointed the cloud bank behind us and said “That’s Pen-y-Ghent”, now it was finally revealed.

We got back to the car pretty wet, but feeling in good spirits – especially Tex – his new coat had kept him bone dry and warm and he was feeling particularly chuffed – he’d got it greatly reduced as one of the inner zips was broken – he loves a bargain!

My ‘waterproof gloves’ were sodden again – I’m getting a bit fed up of them now – I’m going to have to try and find some new ones. My coat is also letting in water, especially when it’s very wet and windy, but then the Paclite seems to be mostly a summer coat material rather than a winter one, so a new coat is in the offing as well I think – that’s my Christmas presents sorted anyway!