This walk has been in Memory Map for a while now, initially as a trig bagging walk, but it also covers 3 of the Yorkshire Top 30 and there’s also a County Top thrown in for good measure, so a bagging walk par excellence. The foul weather forecast made me abandon a planned trip to the big hills in the Lakes and plump instead for lower levels in the Dales. A quick trawl through Memory Map to see what I had handy and it was the work of a moment to choose this one.

Much of the day was spent on trackless grassy hills, but the last 4 miles or so were along a tarmac road which was a bit of a shock to the feet after 9 or 10 miles of soft-sprung, water-logged grass. The wind was ferocious in the exposed areas on the tops, which was pretty much everywhere. Some shelter was provided by the wall along the ridge, but not enough to make a real difference. At least while I was on the tops getting battered by the wind, there was very little rain. This was all to come later as I trudged along the road section back to the car.

There were times on Great Coum where it was raining lightly, but the rain drops weren’t hitting the ground. I could see puddles and small pools with ripples from the wind but no rain drops – they were being driven parallel to the ground across the landscape. The ones that hit me were like little bullets and stung like mad. I made a vow to find a small portable anemometer to carry with me so I can start to gauge how fast the wind is blowing on walks like this. It’s all very well saying “it was windy”, but there’s no context to place it in. I don’t think today was the windiest I’ve ever walked in, but it wasn’t far off. As a result, one or two of the photos are a little blurry 🙂 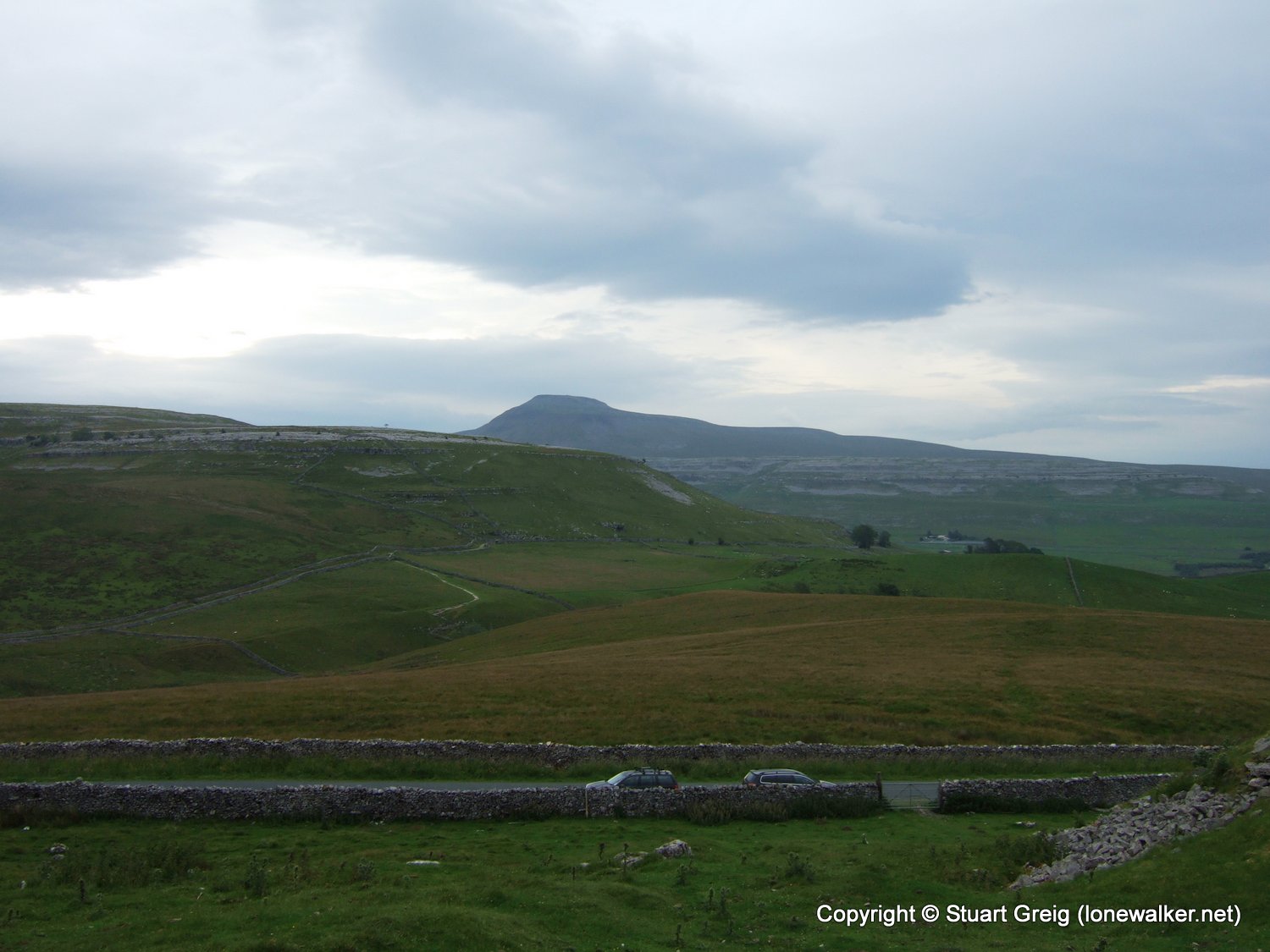 Handy layby at the foot of Tow Scar, where you would normally have good views across to Ingleborough and the surrounding limestone pavements. 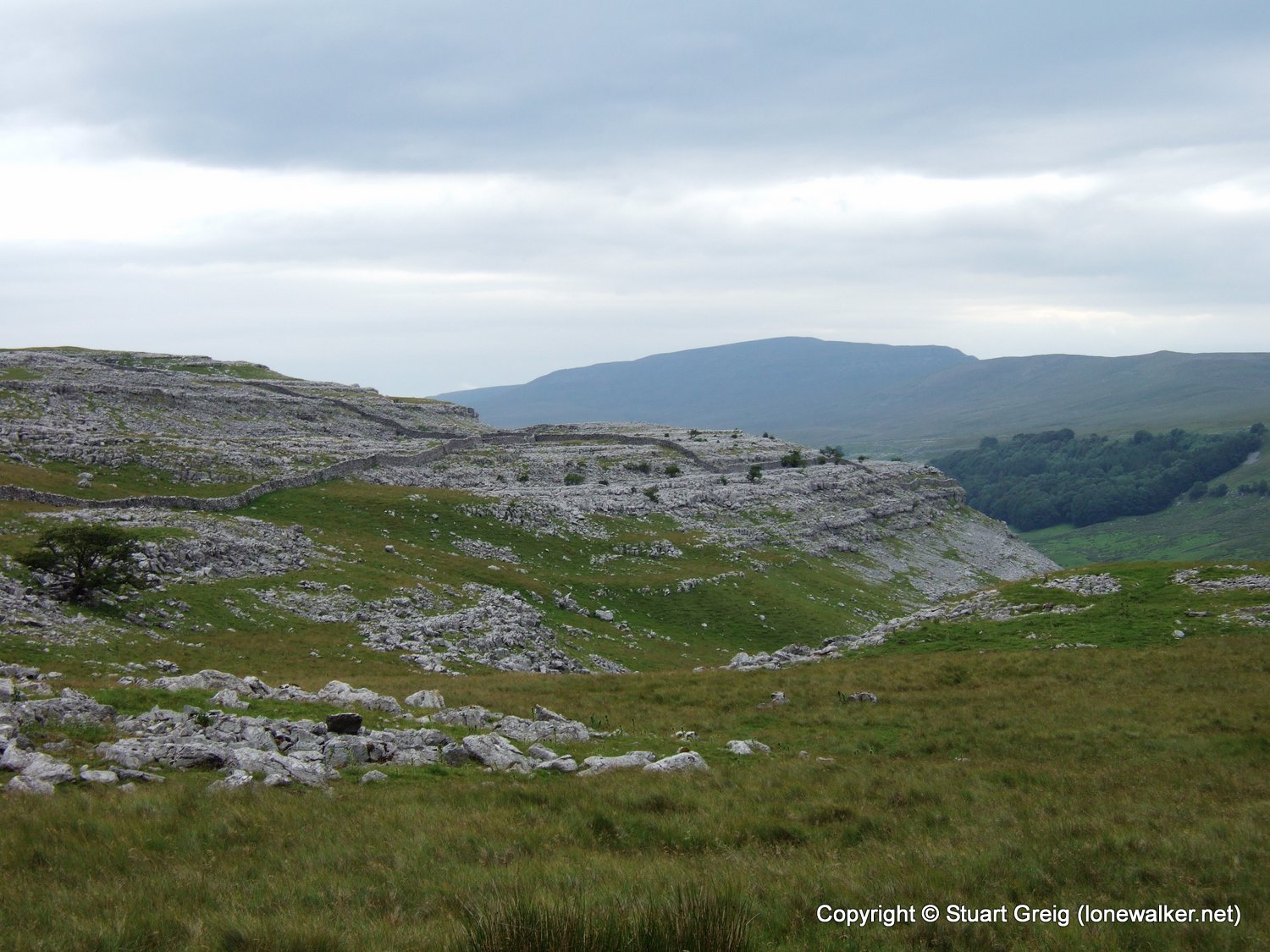 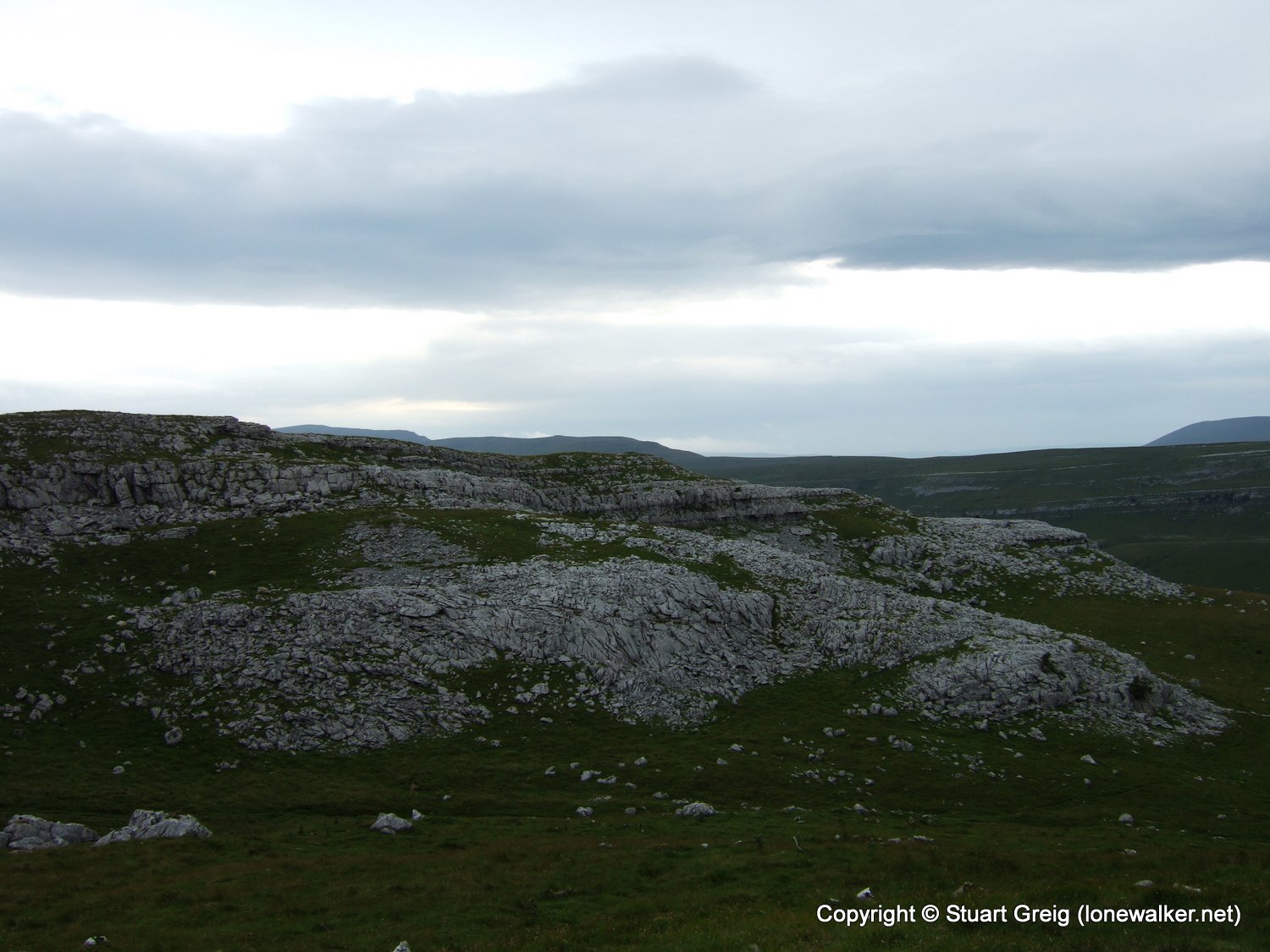 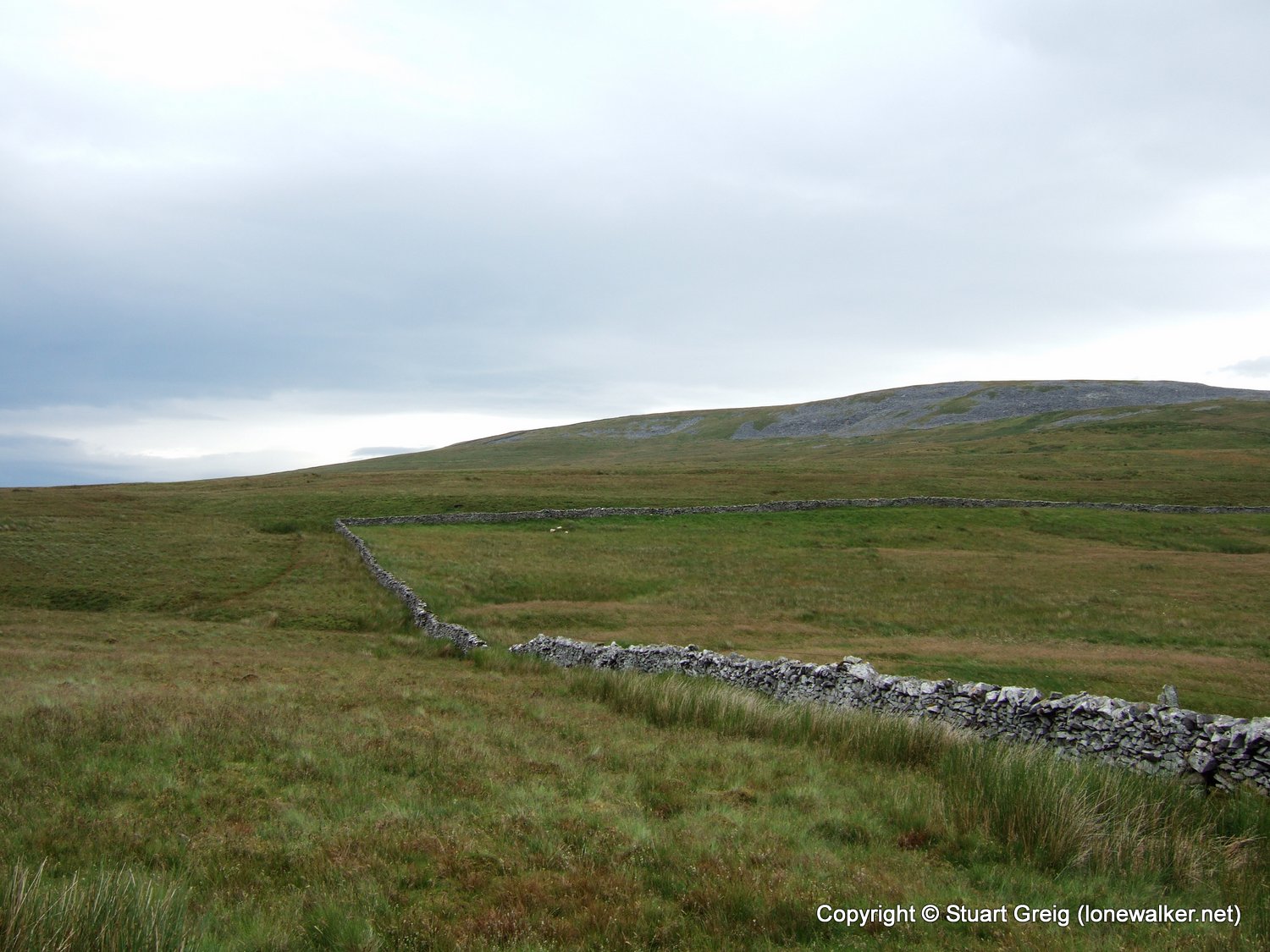 Looking ahead towards Gragareth.

There were very few established paths today. The faint brown path you see next to the wall on the left of the shot is about the best I had. This did mean that there was very little erosion on the surface and almost no bad boggy sections as I encountered on Buckden Pike a couple of weeks ago. Although the ground was very wet, it was mostly firm. 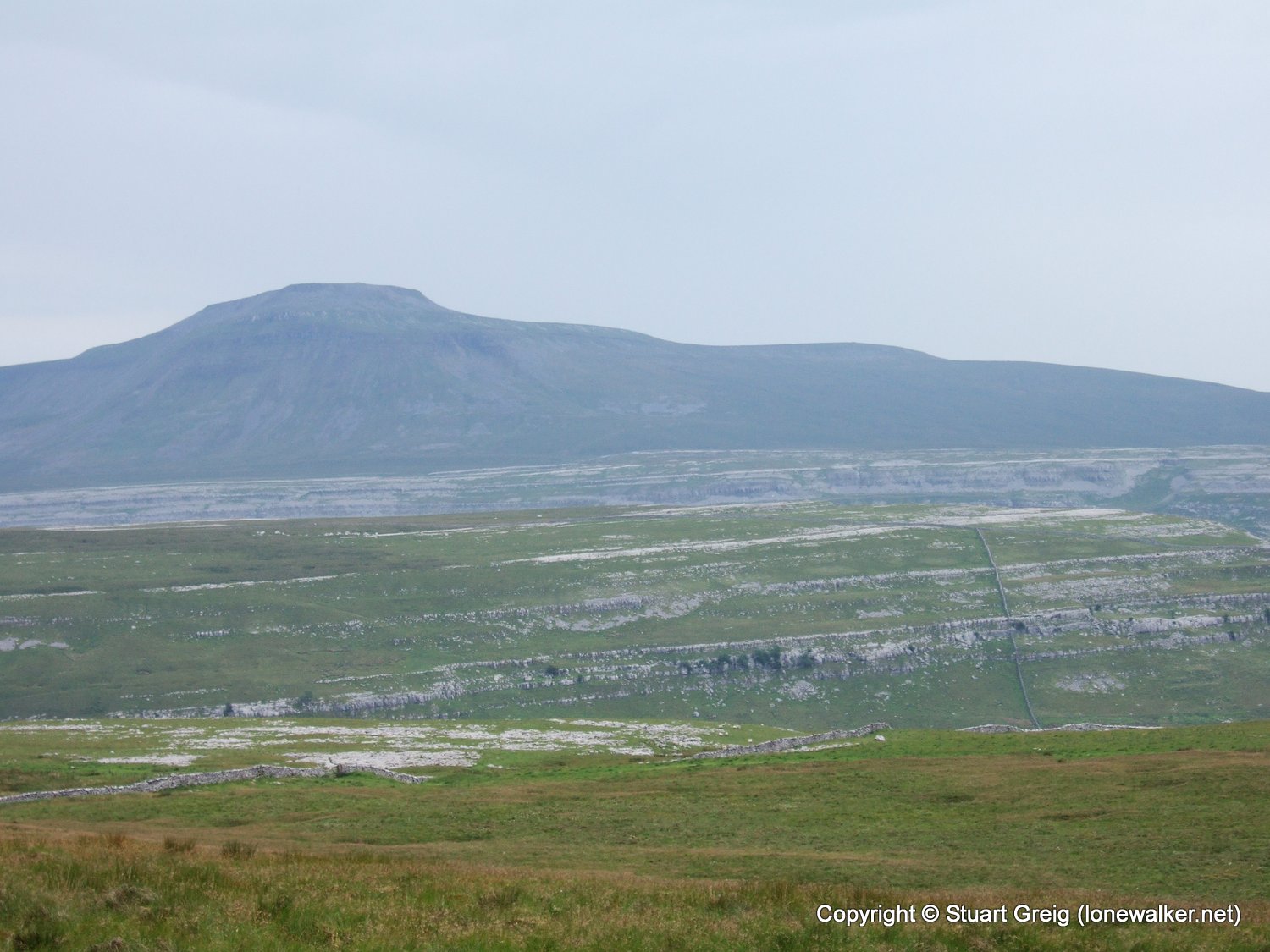 A better view of Ingleborough and the surrounding limestone pavements 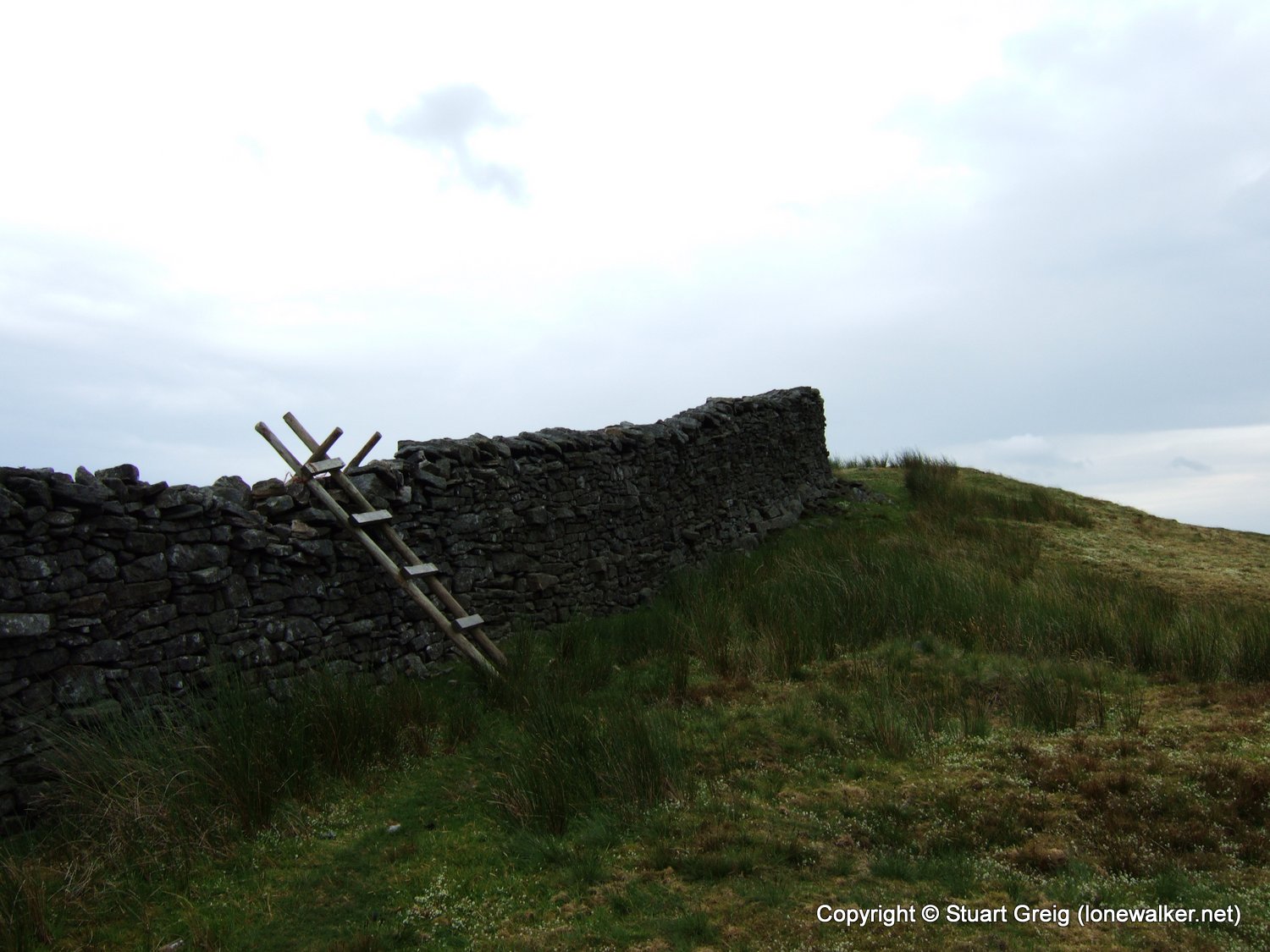 Improvised ladder stile over the wall onto Gragareth.

The recent Countryside Right of Way Act turned huge tracts of land into Open Access land and landowners have responded by placing stiles in appropriate locations to avoid the destruction that would inevitably result in hundreds of people tramping across moors and scrambling over precarious dry stone walls. This one was a bit wobbly, but easier than climbing the wall. 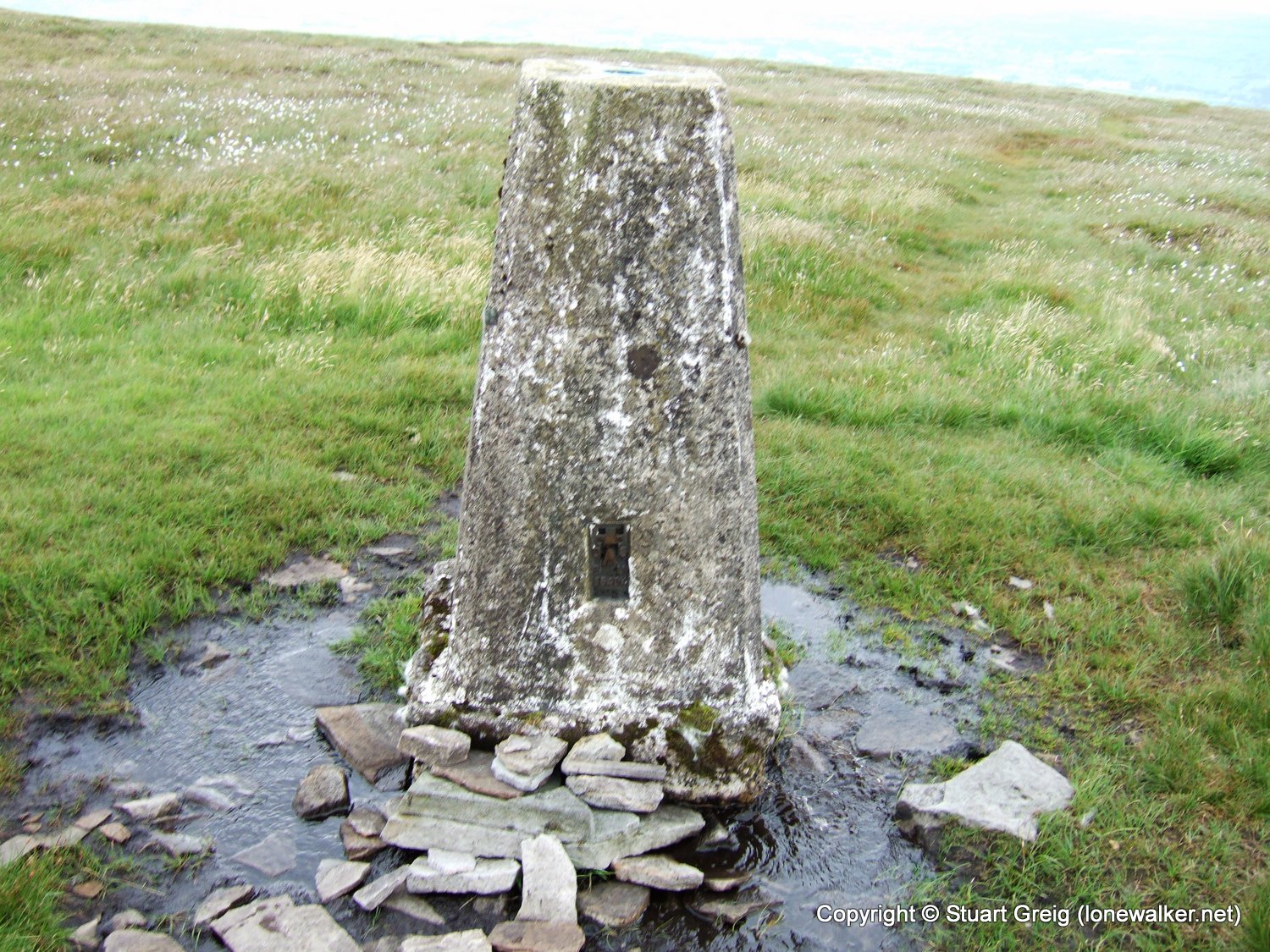 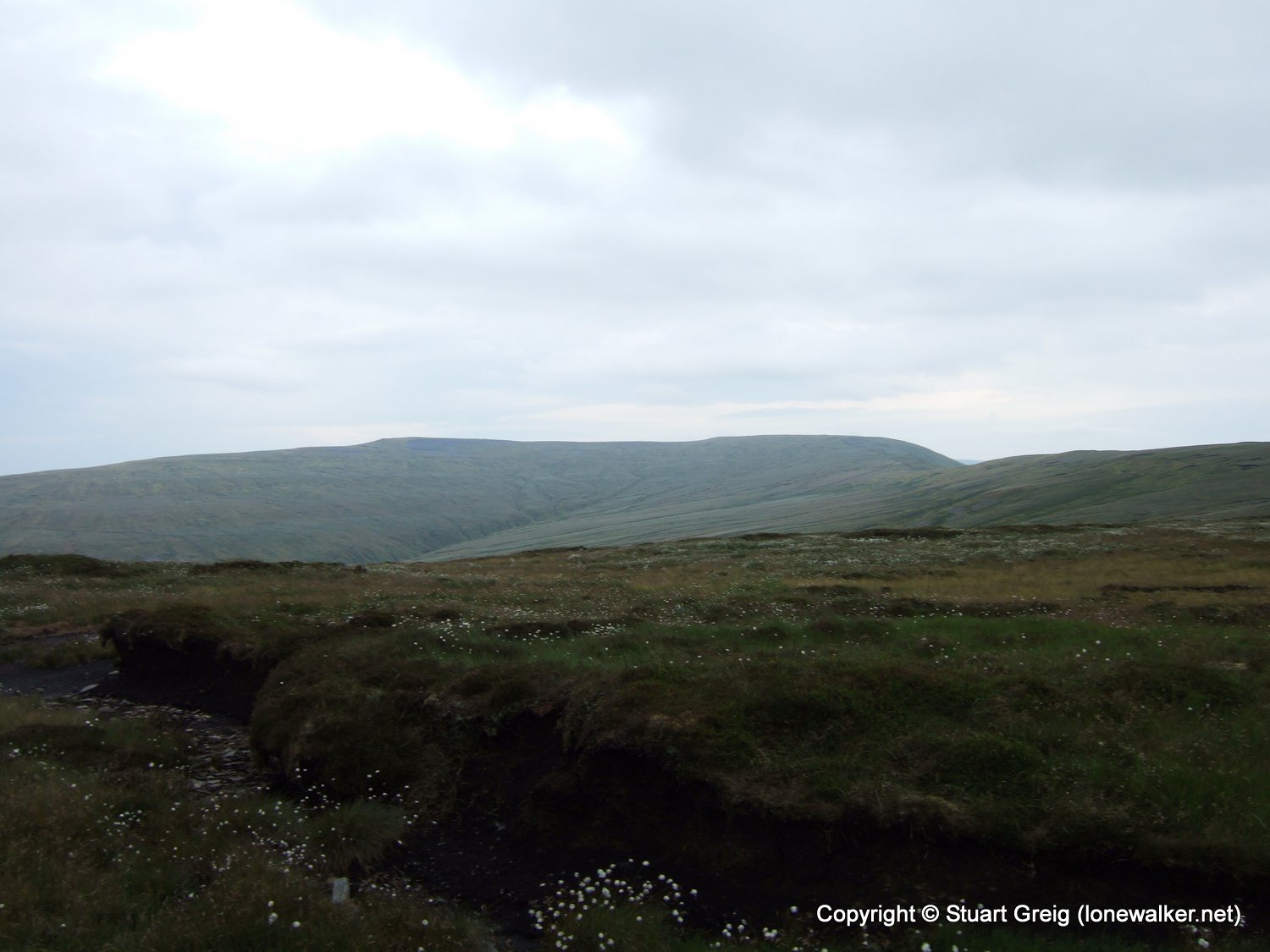 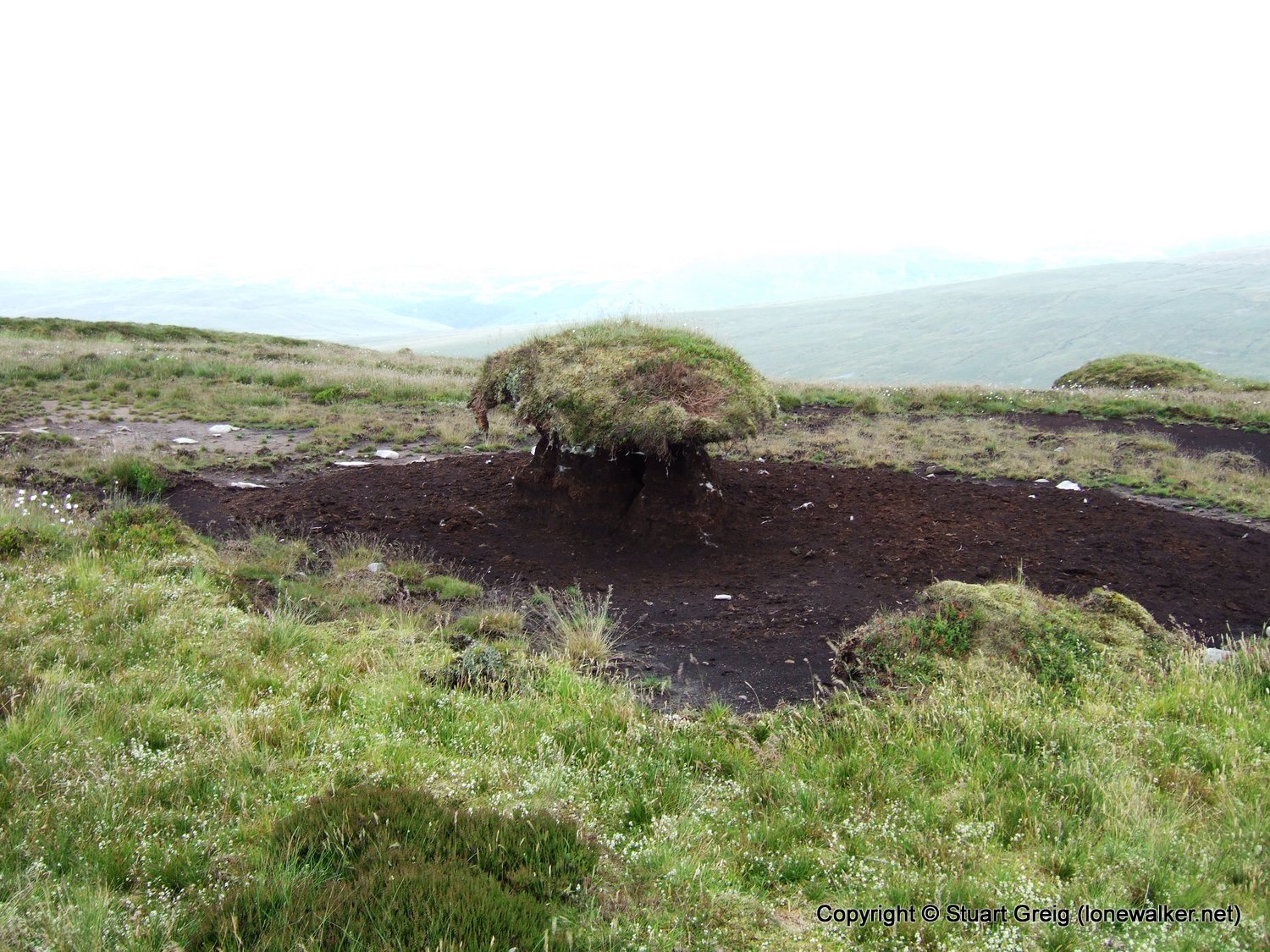 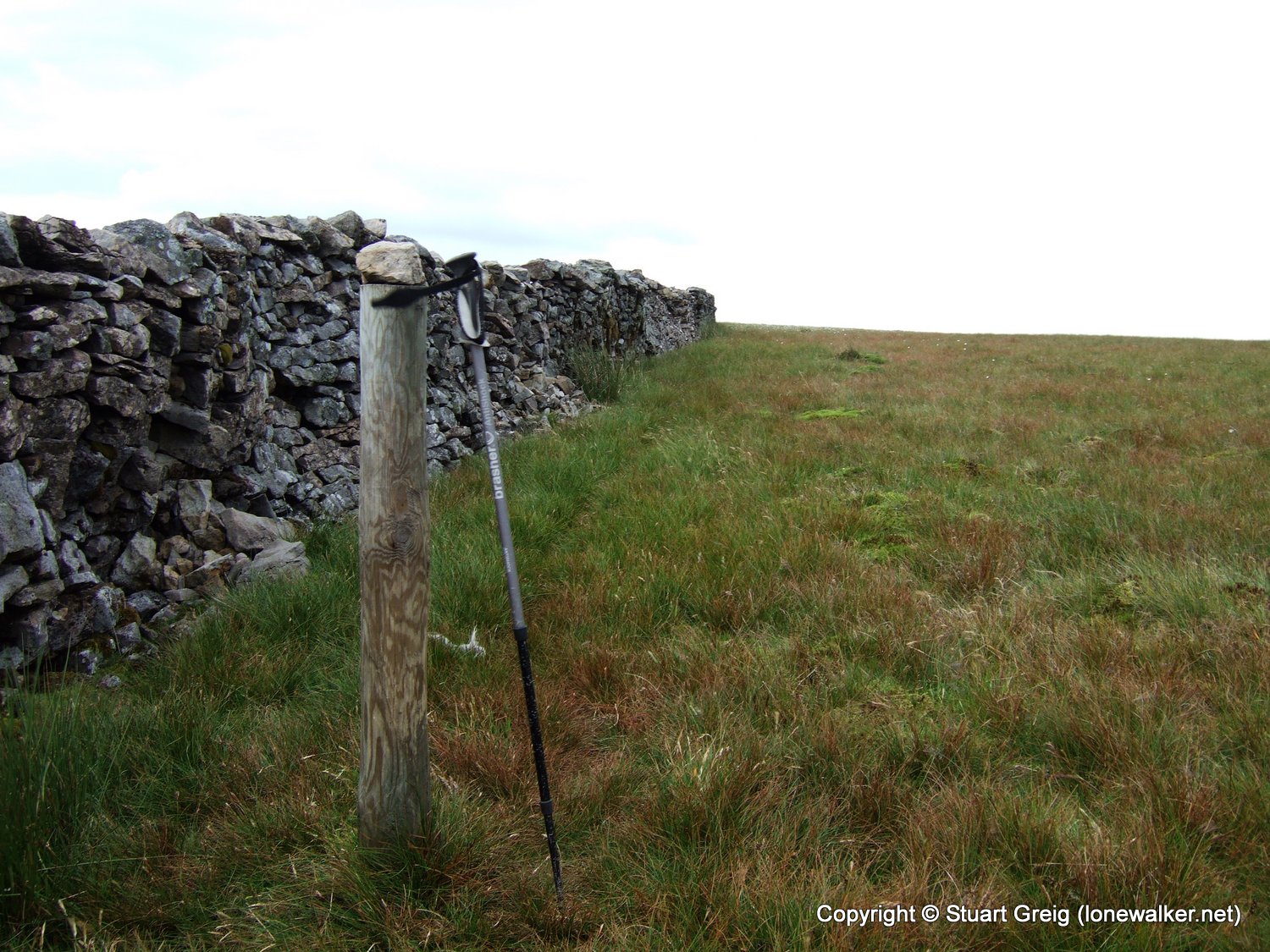 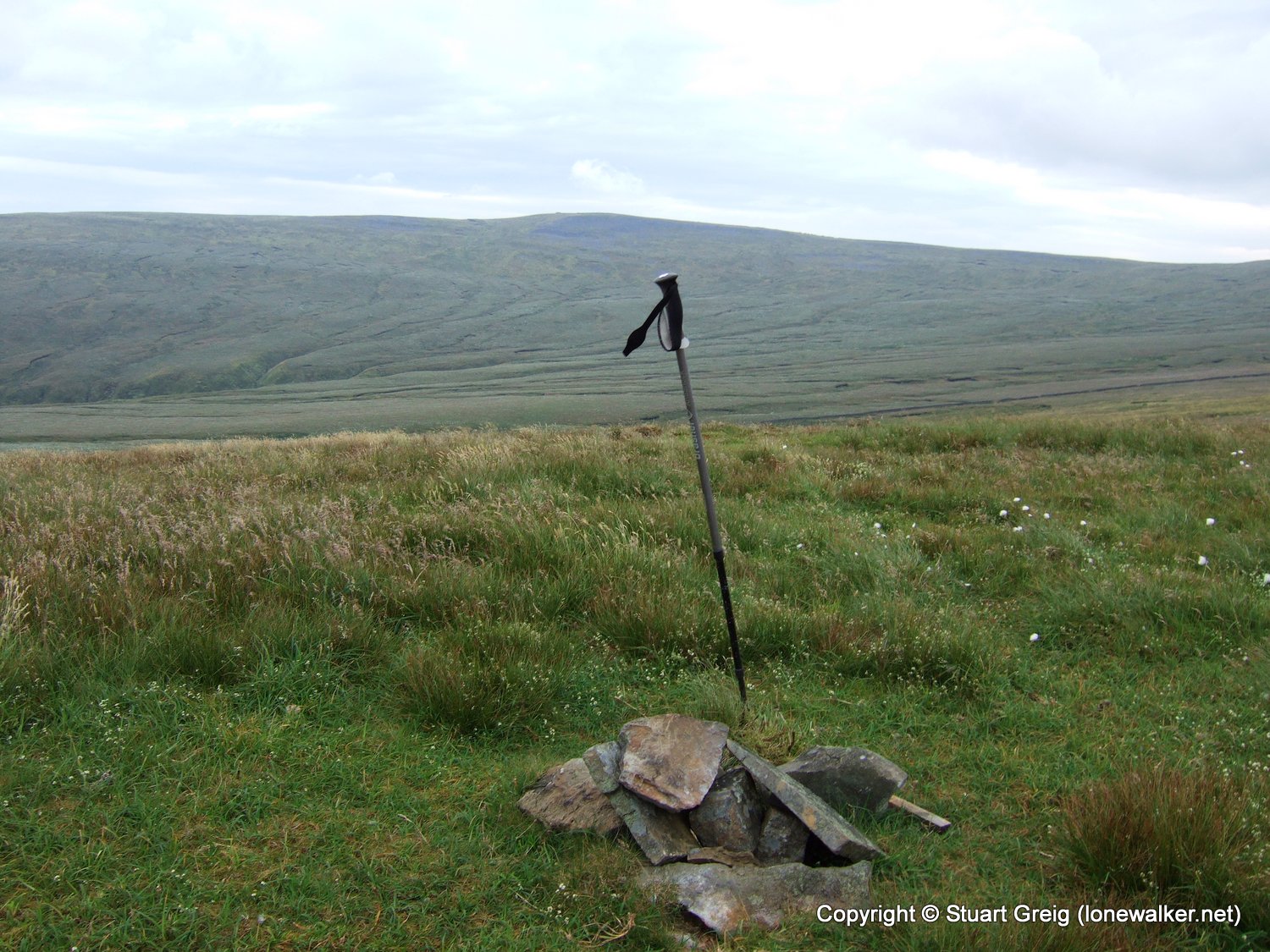 Green Hill is the County Top for Lancashire. Unfortunately it’s not easy to decide which is the actual top. The Landranger (1:50k) map suggests the top is 626m and located on the southern end of the long flat top. The Explorer (1:25k) map suggests the top is 628m at the northern end. There is a stake in the ground at the 626m position and the stake has a stone atop it, almost to suggest a cairn. There is no reason for the stake to be there, it’s not attached to anything and it’s not supporting anything (other than the stone of course).

There is a small cairn on a slight hillock at the northern end of the hill and this is obviously intended to indicate a summit point. As a matter of covering all my bases I visited both points and took photos of them both. My feeling is that the cairn is the true summit as it even looked to be a little higher then the previous position marked by the stake. As I said on the County Top bagging page – creating a definitive list is not that easy! 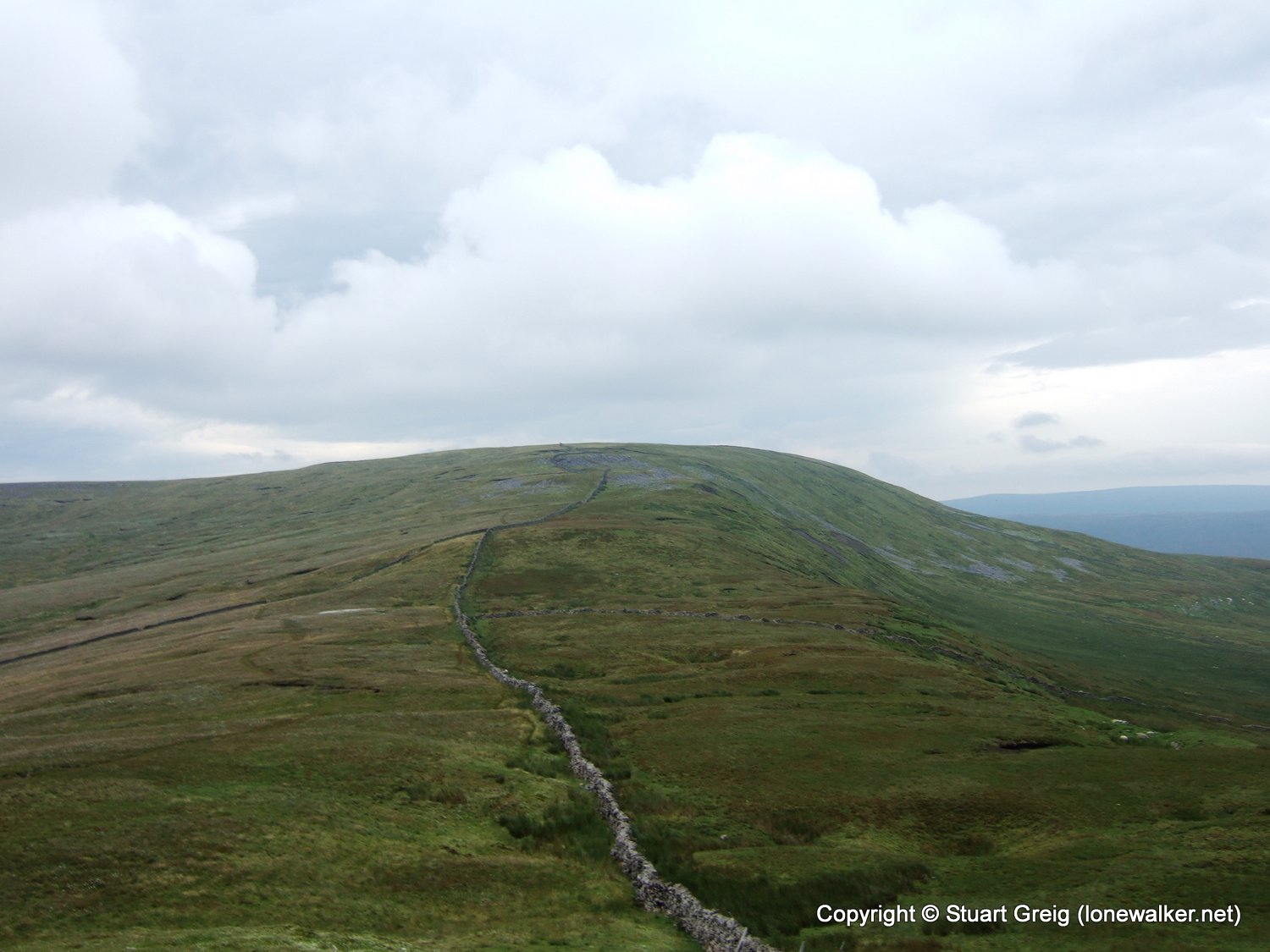 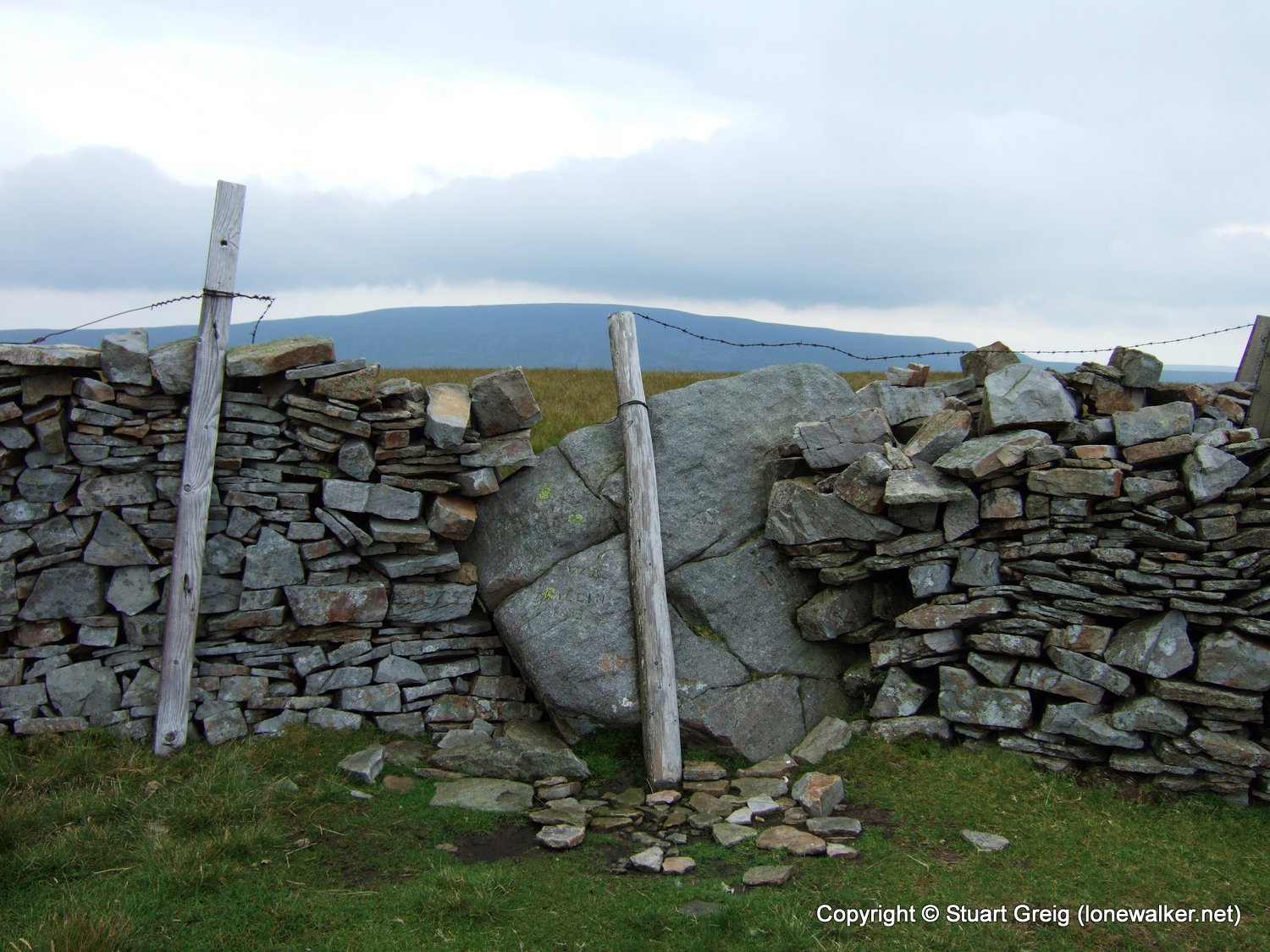 The County Stone (at location SD70144 82744) marks the north east corner of Lancashire. There a
re names carved into the stone dating back to the early 1800’s 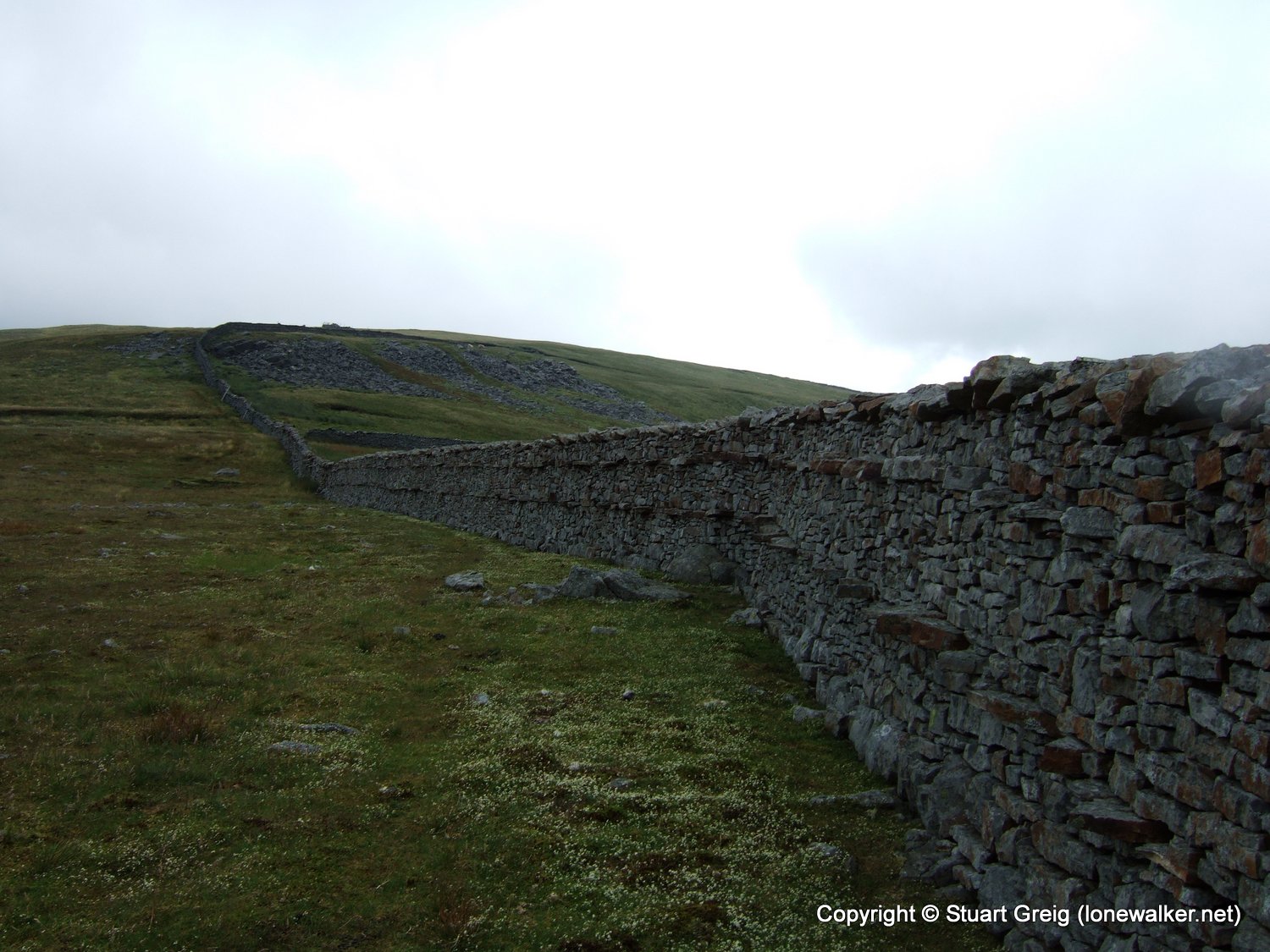 Some recent wall building (or re-building) has been going on here – it looks very impressive! 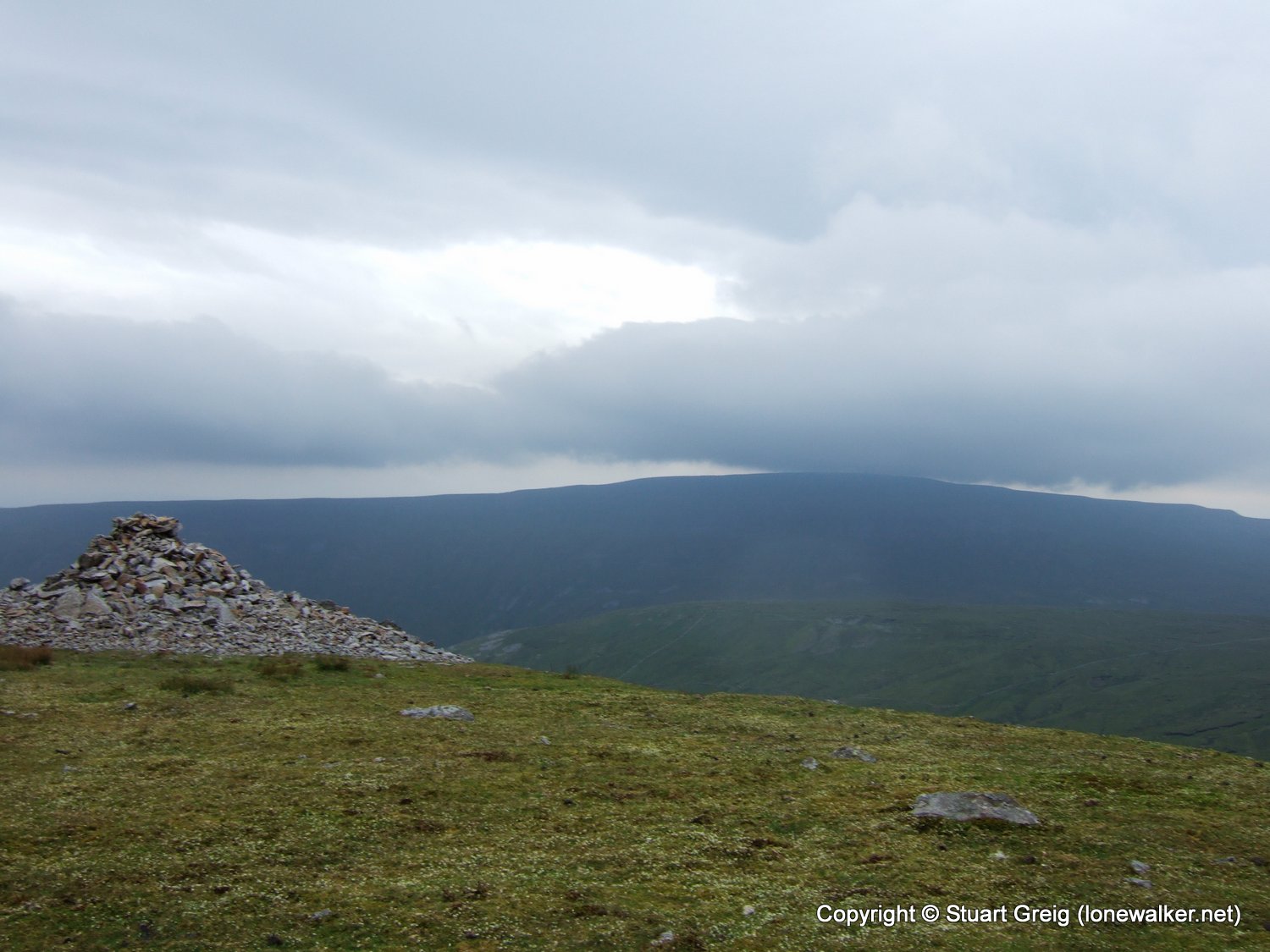 A taste of things to come – low cloud and rain on Whernside and the wind is blowing in my direction! 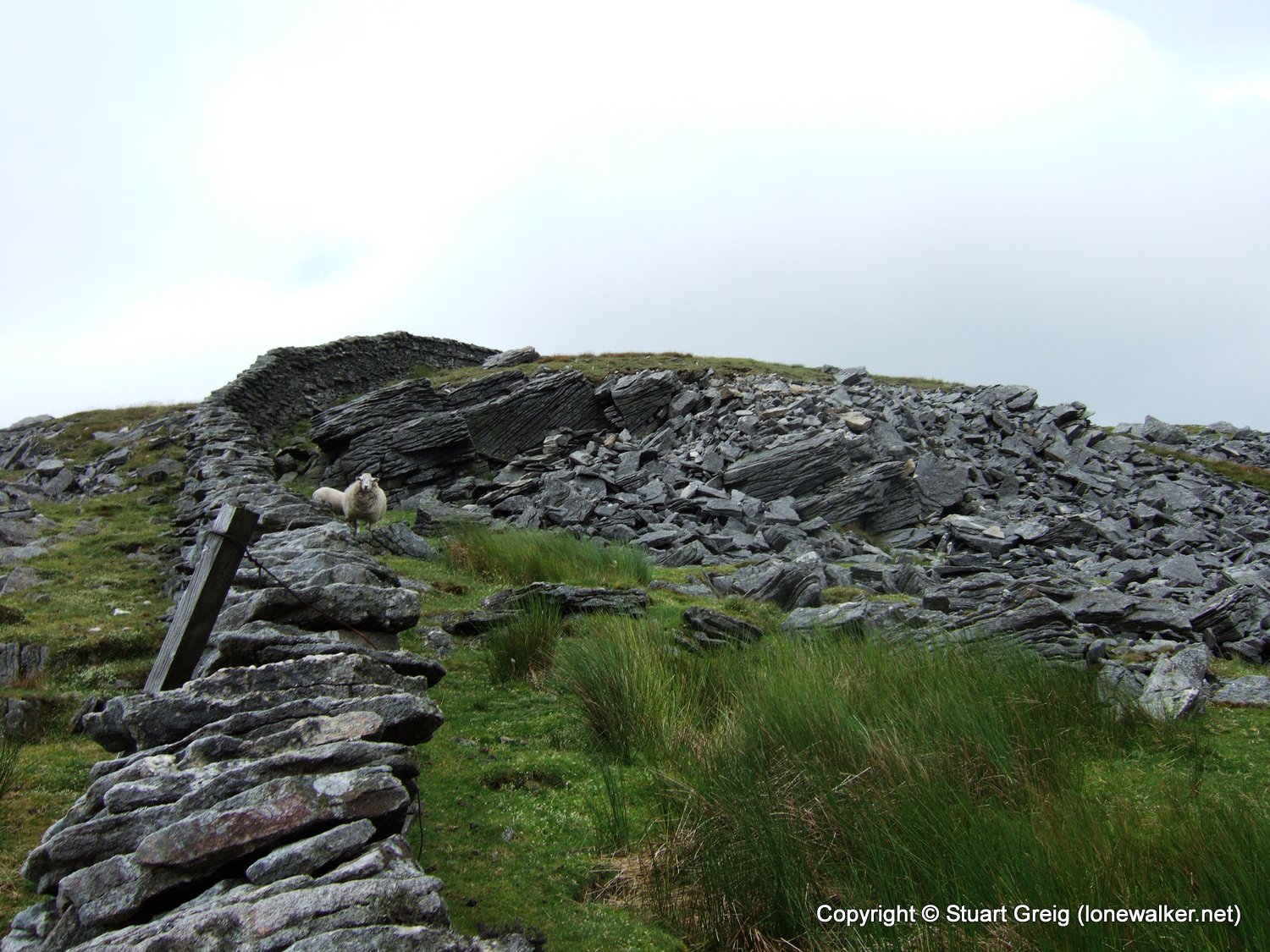 A jumble of rocks with interesting strata lines in them, on the way up to Great Coum – where’s Rambling Pete when you need him? 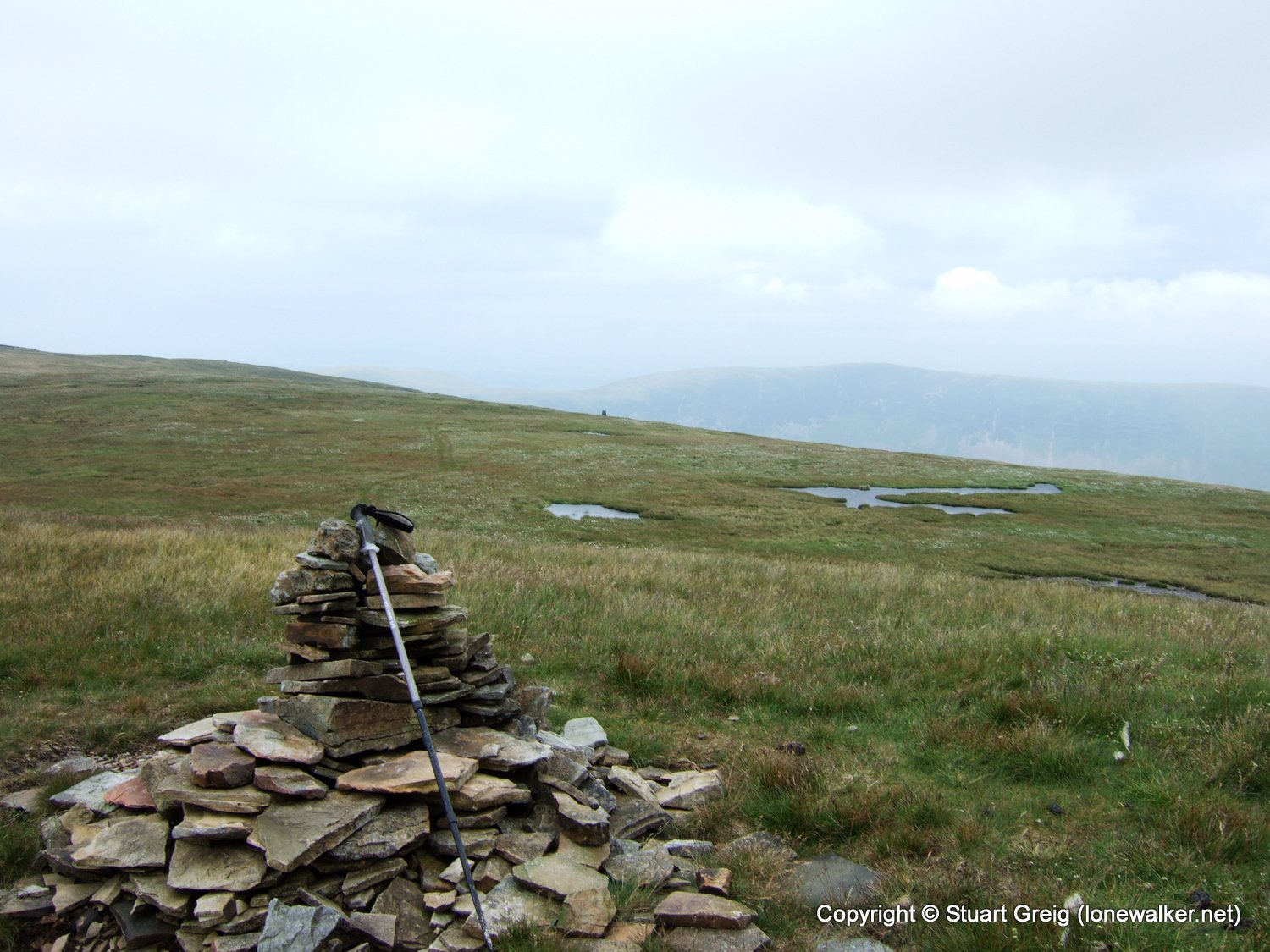 The summit cairn on Great Coum, looking down to an impressive cairn overlooking Crag Side 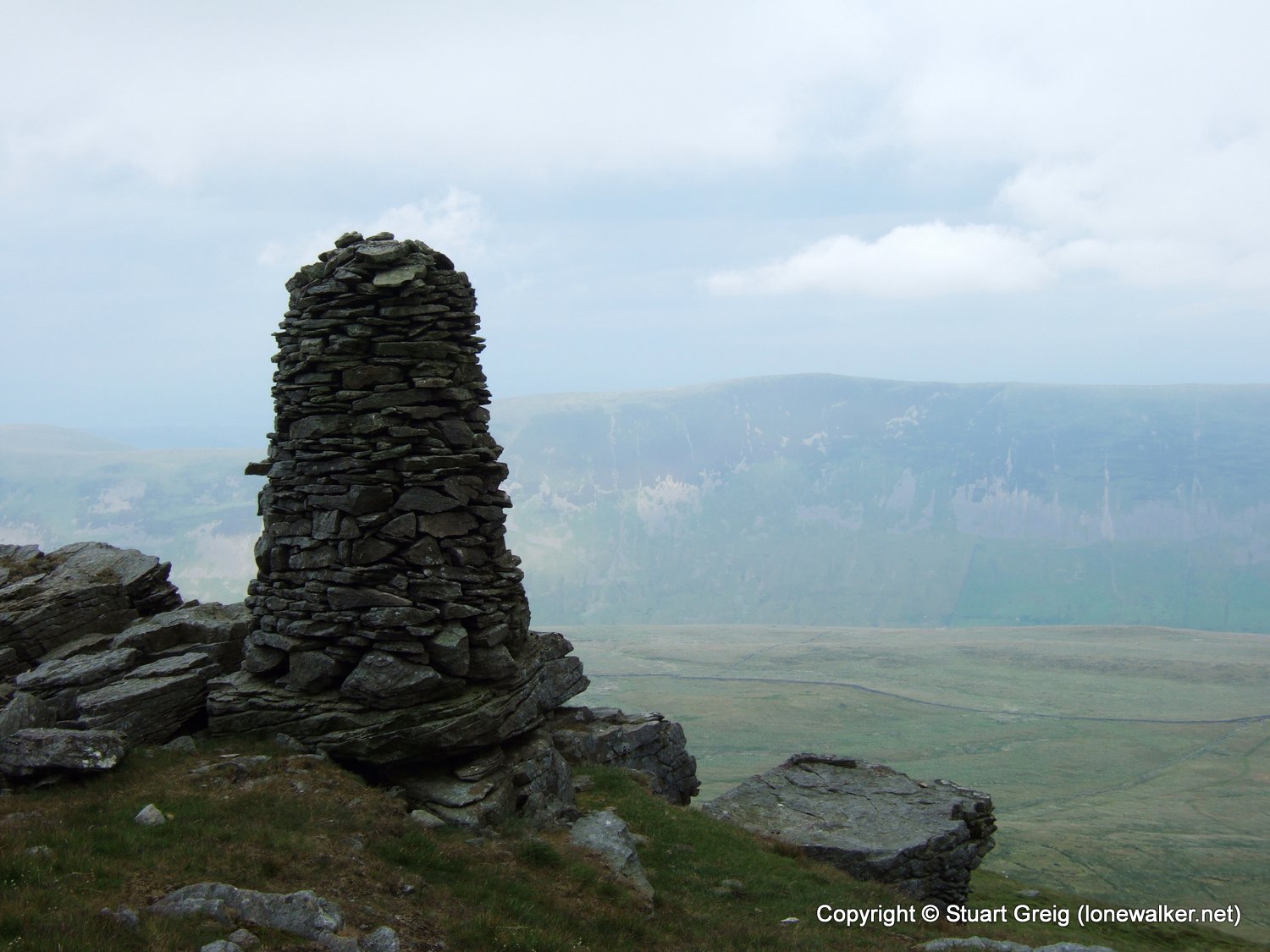 The cairn overlooking Crag Side – hugely impressive piece of work.

When the weather is better, this must be a fantastic place to sit and gaze in awe. Today it was so windy I could barely stand straight. 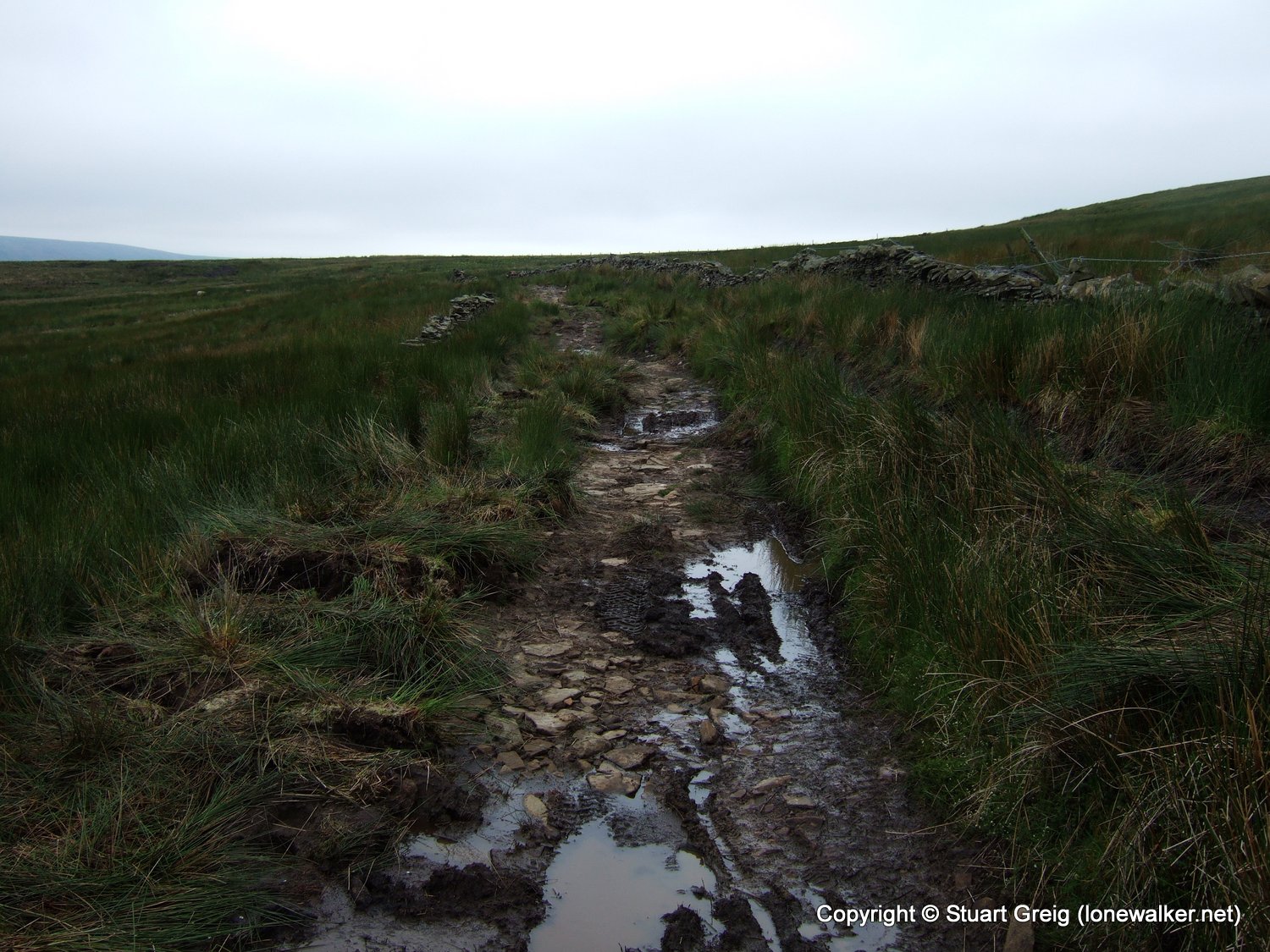 After bagging the trig point on Crag Hill, further along the ridge from Great Coum, I retraced my steps and returned to the County Stone, from where I cut across the fields to descend to the farm track across Foul Moss. This obviously gets a lot of use from motocross riders, despite it being designated a bridleway and the result is deep mud pools between the stony sections.

After reaching the unclassified (yellow) road at White Shaw Moss the heavens opened. I just about had time to hop into my overtrousers and pull my jacket on. It then proceeded to rain solidly for an hour, often torrential, but at least the wind in the valley was negligible and the result was rain at the usual 90 degrees to the floor. 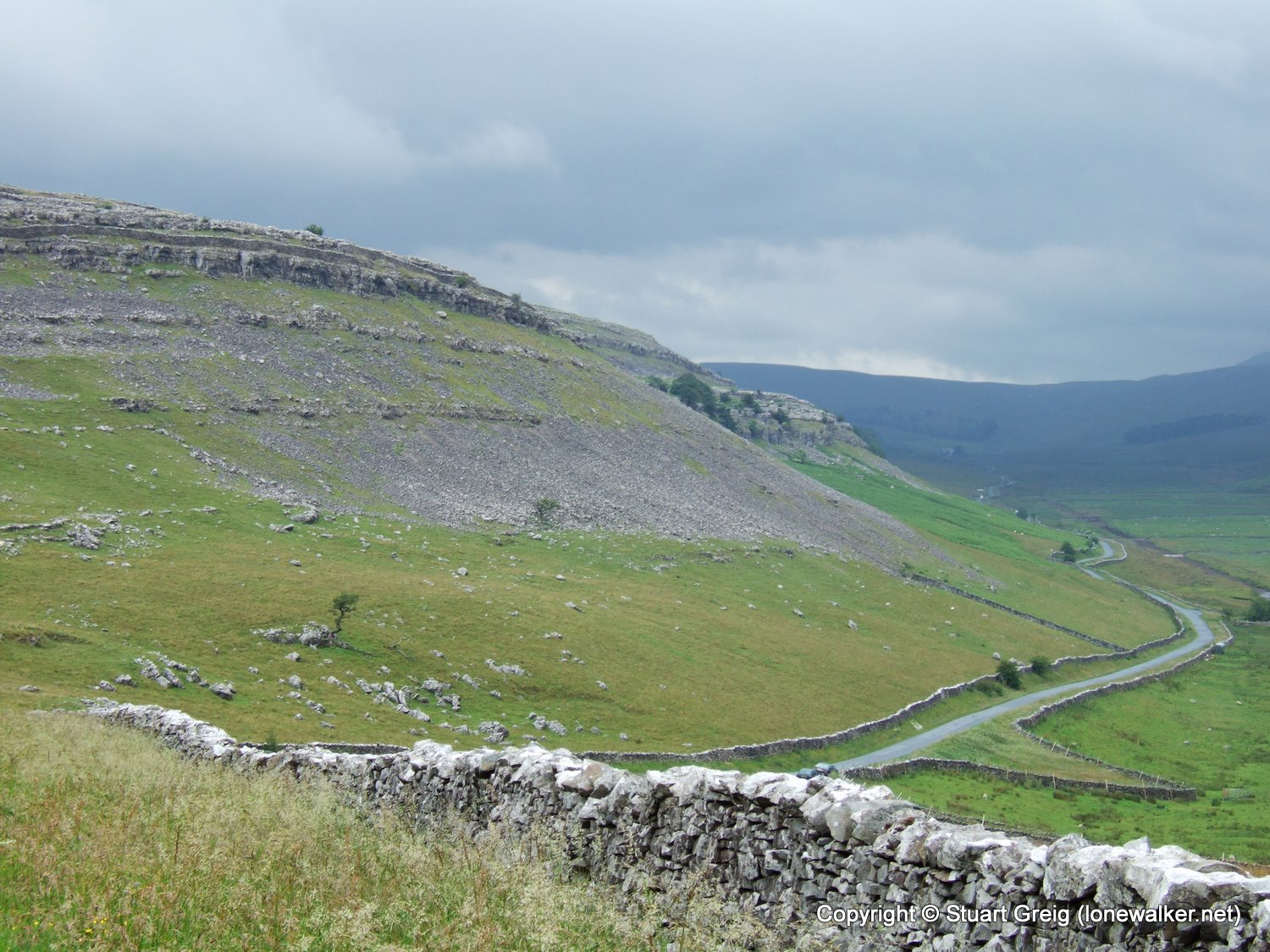 The rain abated just before I reached the car and I managed to get a picture of the hugely impressive Keld Head Scar.