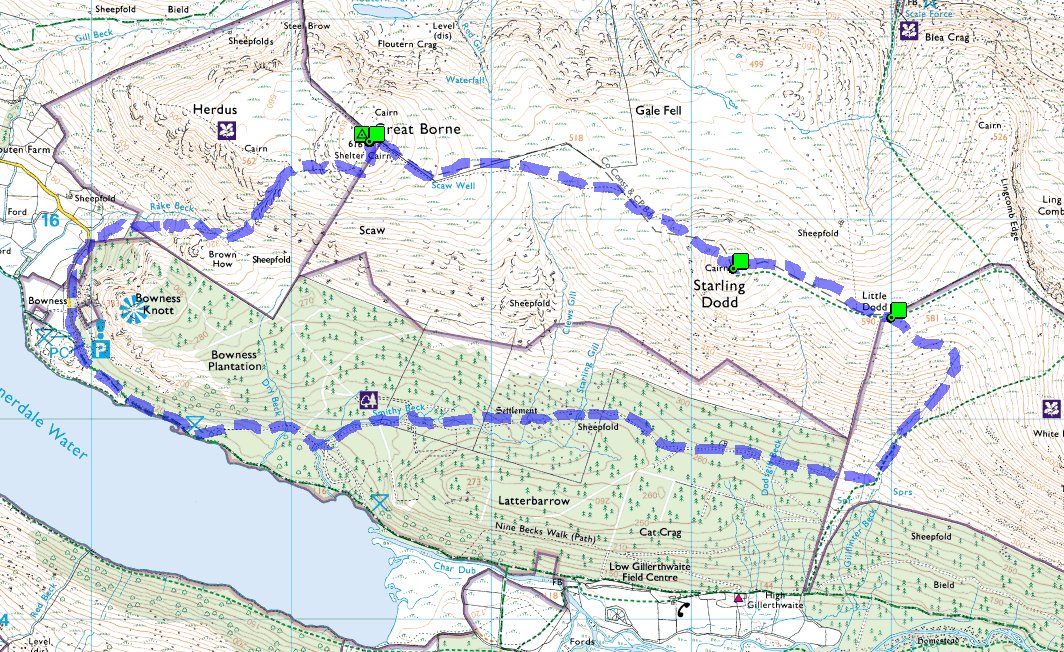 I’d been planning a weekend in Ennerdale for about 3 months, but the weather has never been good enough to take the plunge. The Western Fells are the most remote part of the Lake District and getting to them can take me up to three hours, so they aren’t that conducive to a day walk. It makes sense therefore, to invest two or three days and pick off as many of the Wainwright’s in this area as possible.

In then end I gave up waiting for a favourable weather window and just decided to head out and take my chances. I had three high level walks planned and a couple of low level alternatives should the weather be really bad. I didn’t make any reservations for accommodation, instead trusting to luck, and the fallback of my tent if I couldn’t find a bed for the night.

My first walk, by necessity was a shortish one. I didn’t arrive at Bowness car park until about 13:00 and I needed to allow time at the end of the day to try and find somewhere to sleep. I selected Great Borne and Starling Dodd as a likely short walk, with the added bonus of a trig point on great Borne.

As I was preparing my kit in the car park I noticed an elderly gent at the car next to me, looking a bit lost. I said hello and asked him if he had just arrived, like me, or whether he’d already been out. He ignored the question, but used the opportunity to ask me if I knew of a path that would take him to the top of Bowness Knott; obviously what he had been wanting to ask, but without coming straight out with it.

I showed him my map and the little path that follows the beck from the roadside, swings round Brown How and the up to Bowness Knott. I explained I would be following the same path for a while until I left it to follow Rake Beck up onto Great Borne. He thanked me and went to put his boots on. I left the car park a few minutes before he did, giving him something to follow. 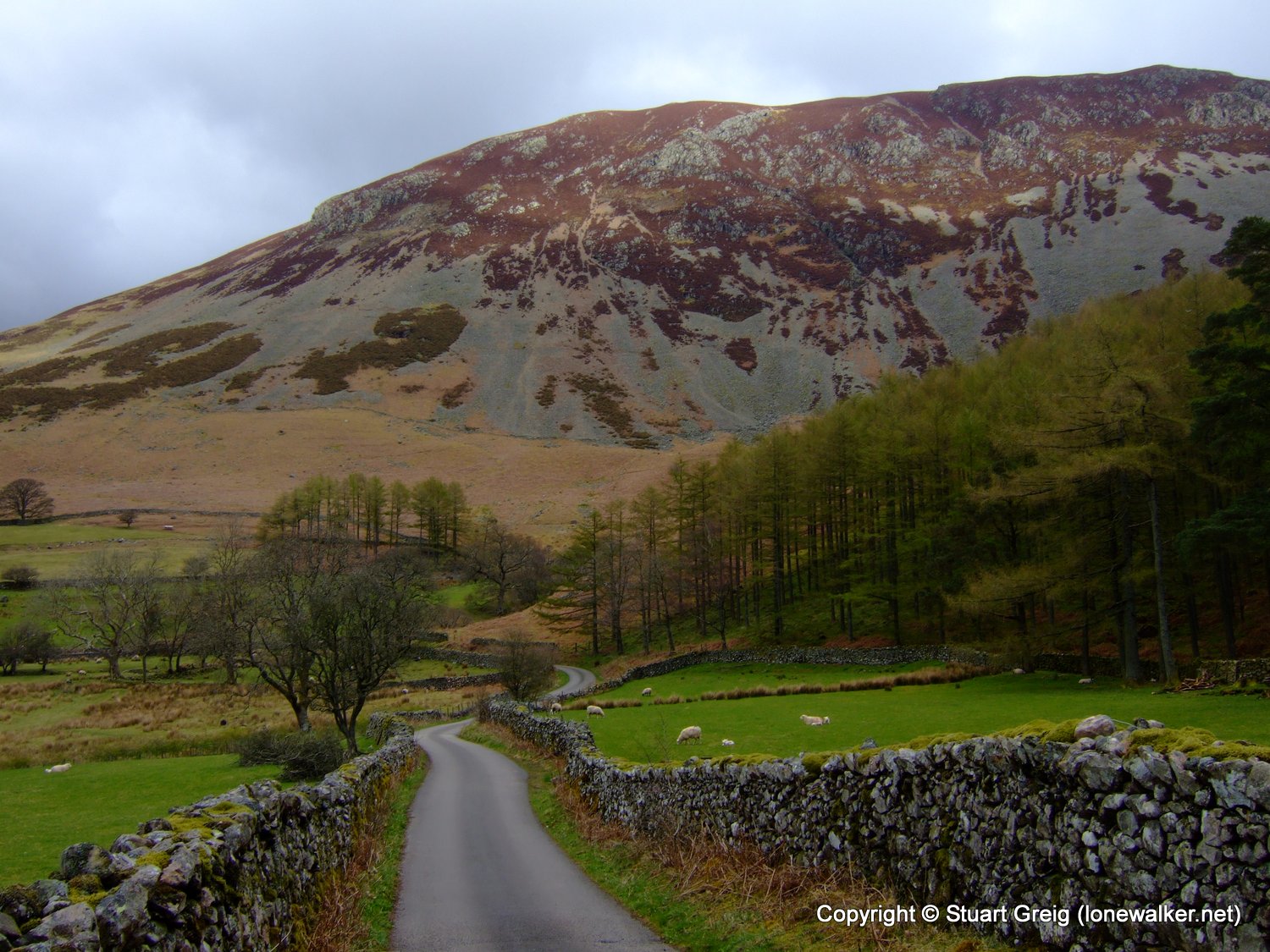 This is the road out of the car park at Bowness. My path leaves the road just after the trees end on the right and sweeps round behind them up the fellside. 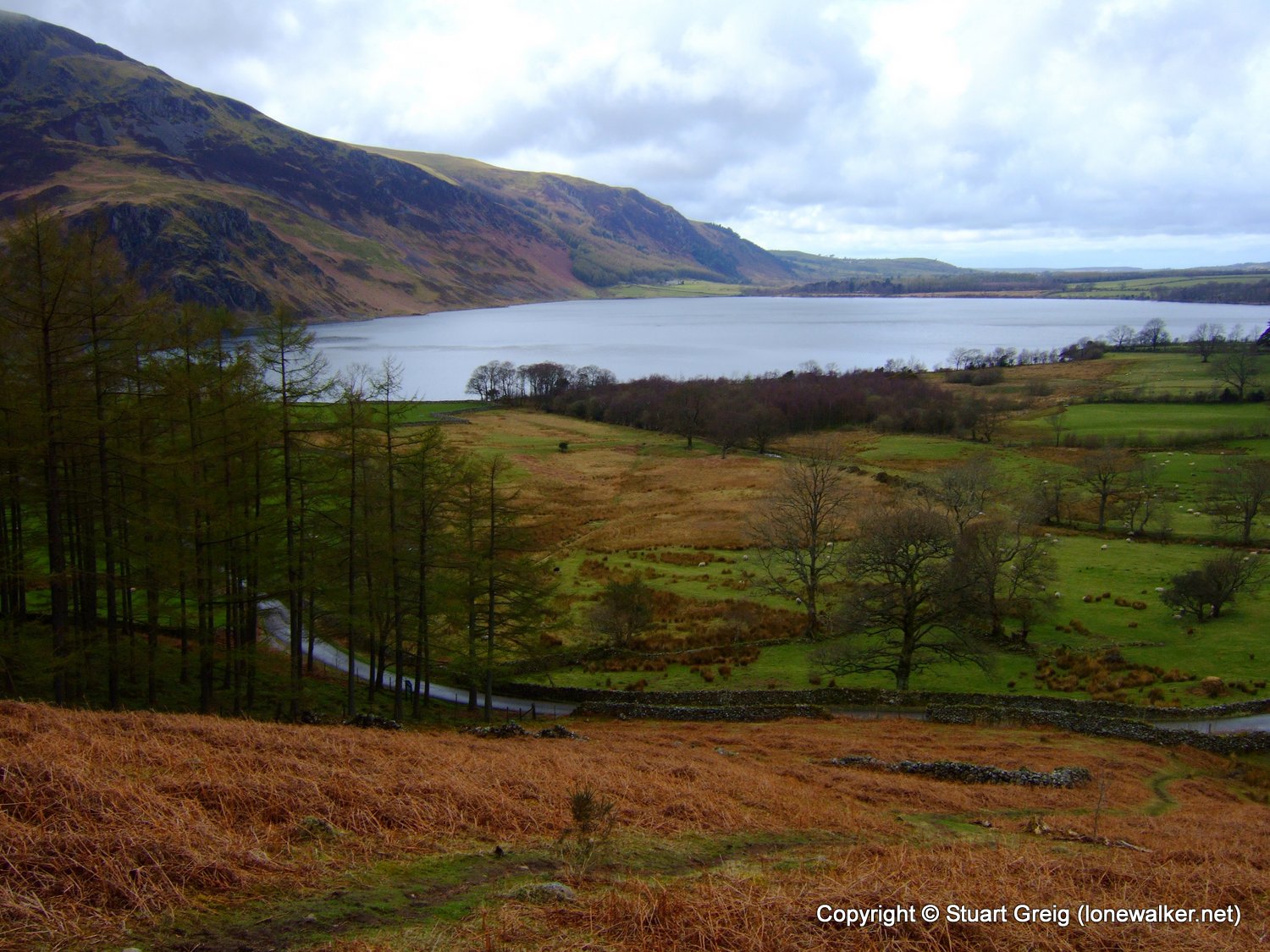 Now on the path between the trees and Rake Beck. As you climb higher, the views across Ennerdale become stunning. Looking west all you can see if flat fields and the odd lump or bump – most un-Lakeland like. 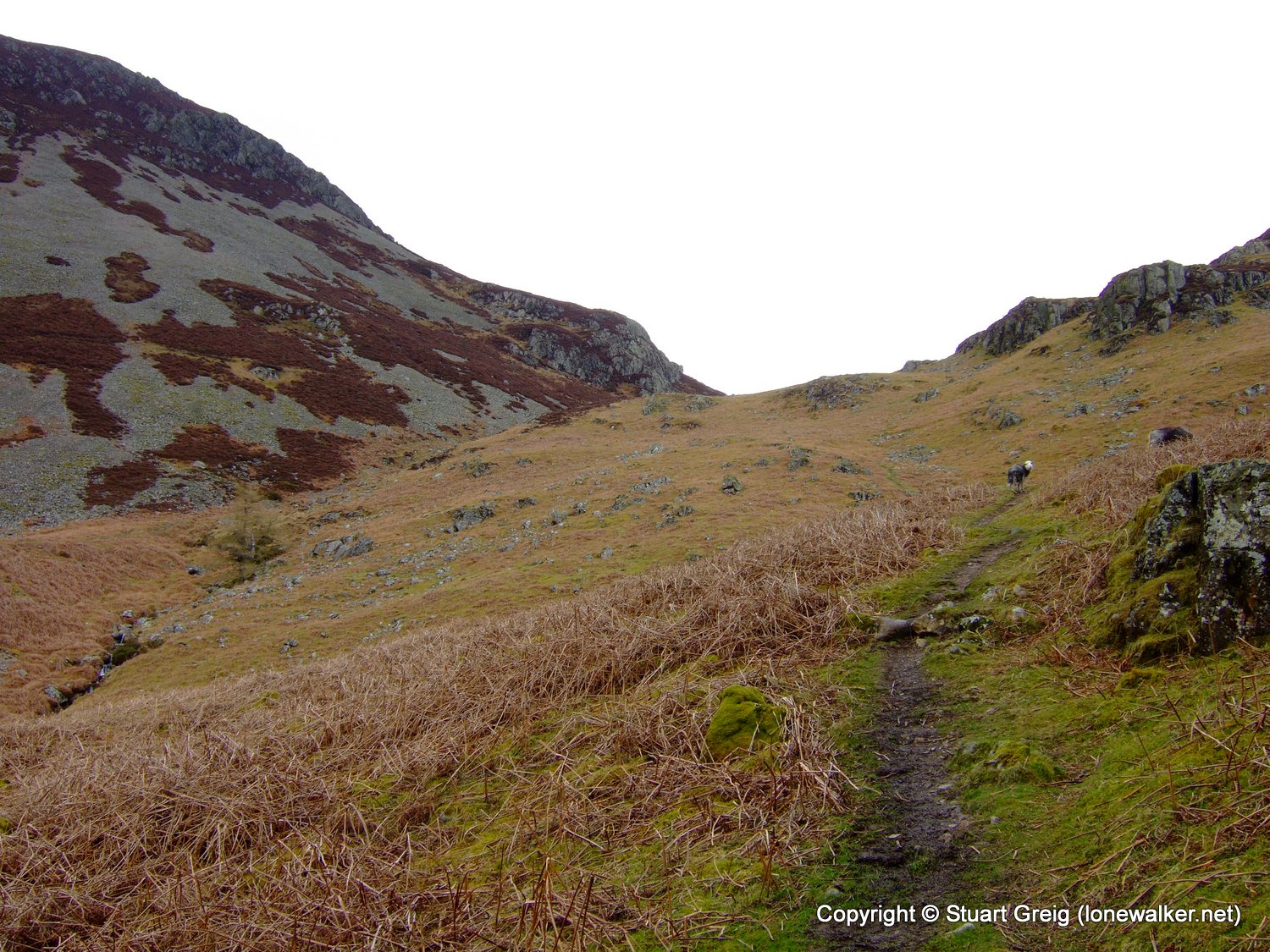 The path starts out wide and clear and not too steep. Herdus is the hill on the left and Brown How is ahead, just above the sheep. I’d not been out for a couple of weeks and the hill felt good – I’ve been doing lots of work in the gym and although I’m sweating like a rapist, my legs feel good and strong for a change. 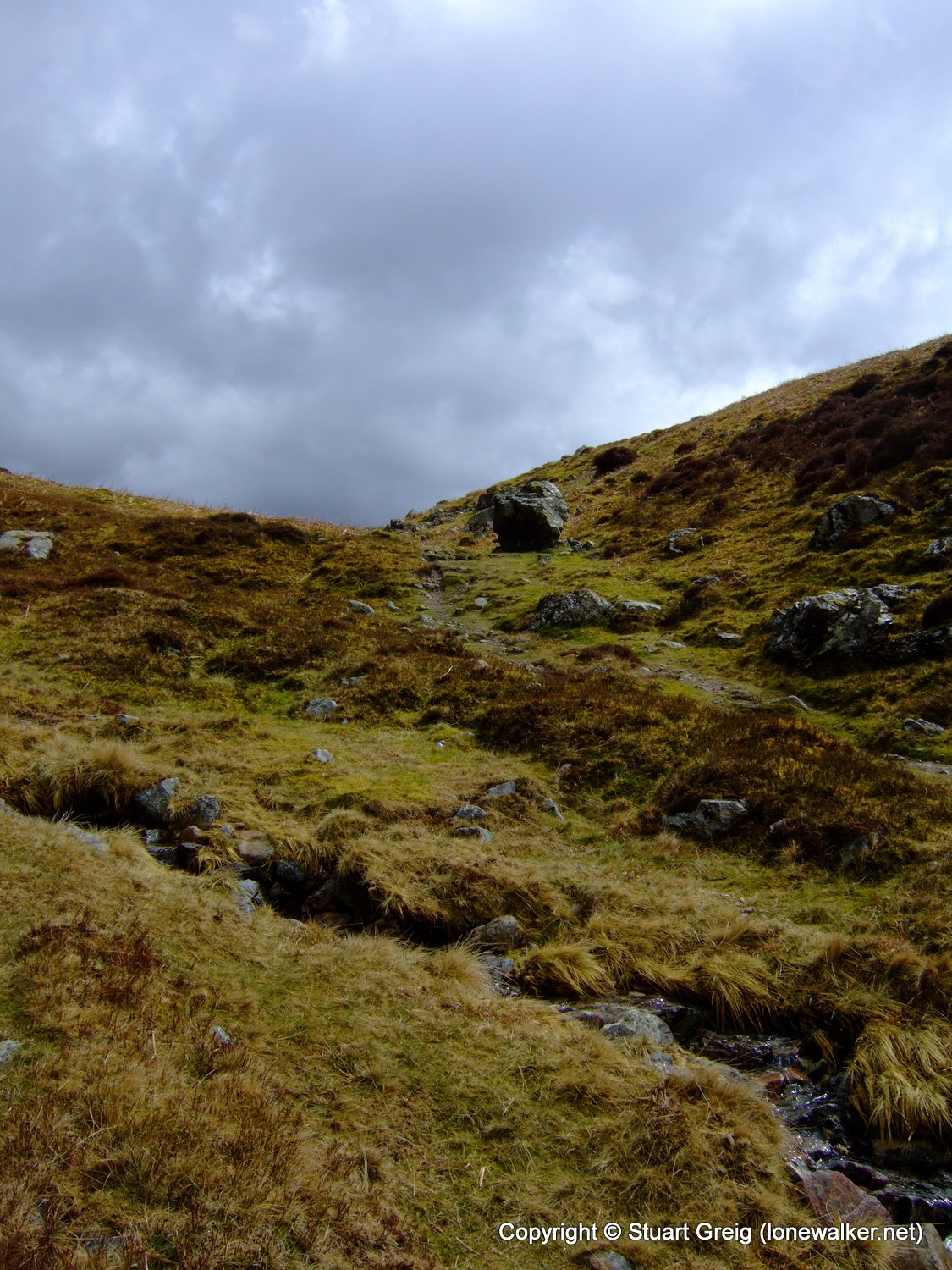 The path spilts just before this huge boulder. The right track leads to Bowness Knott, my track on the left leads up the side of Herdus and Great Borne. 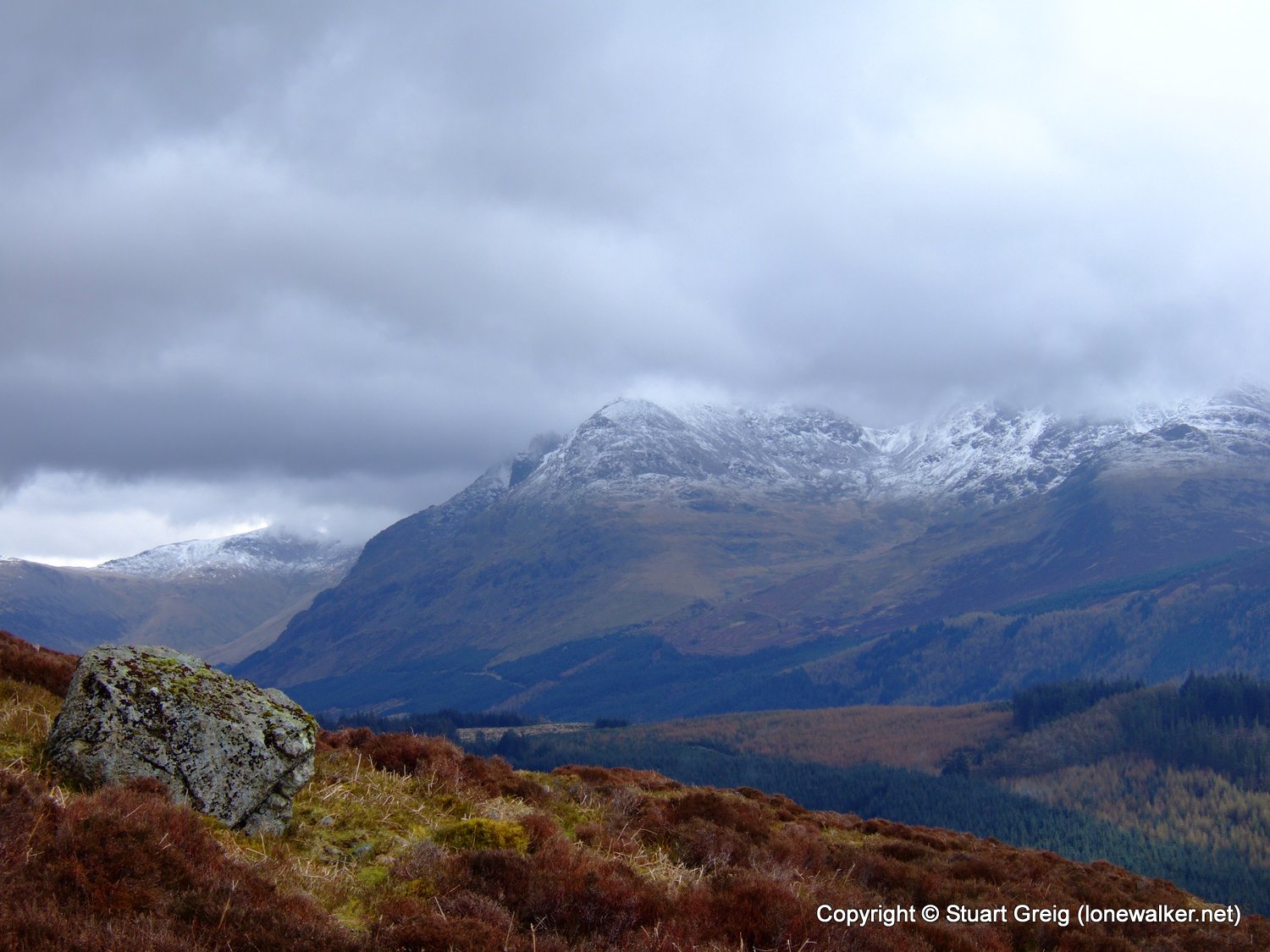 The higher surrounding peaks are all snow capped and most of them are still cloud capped too. Occasionally the cloud will clear to leave a startlingly beautiful panorama of peaks, dominated by Pillar. 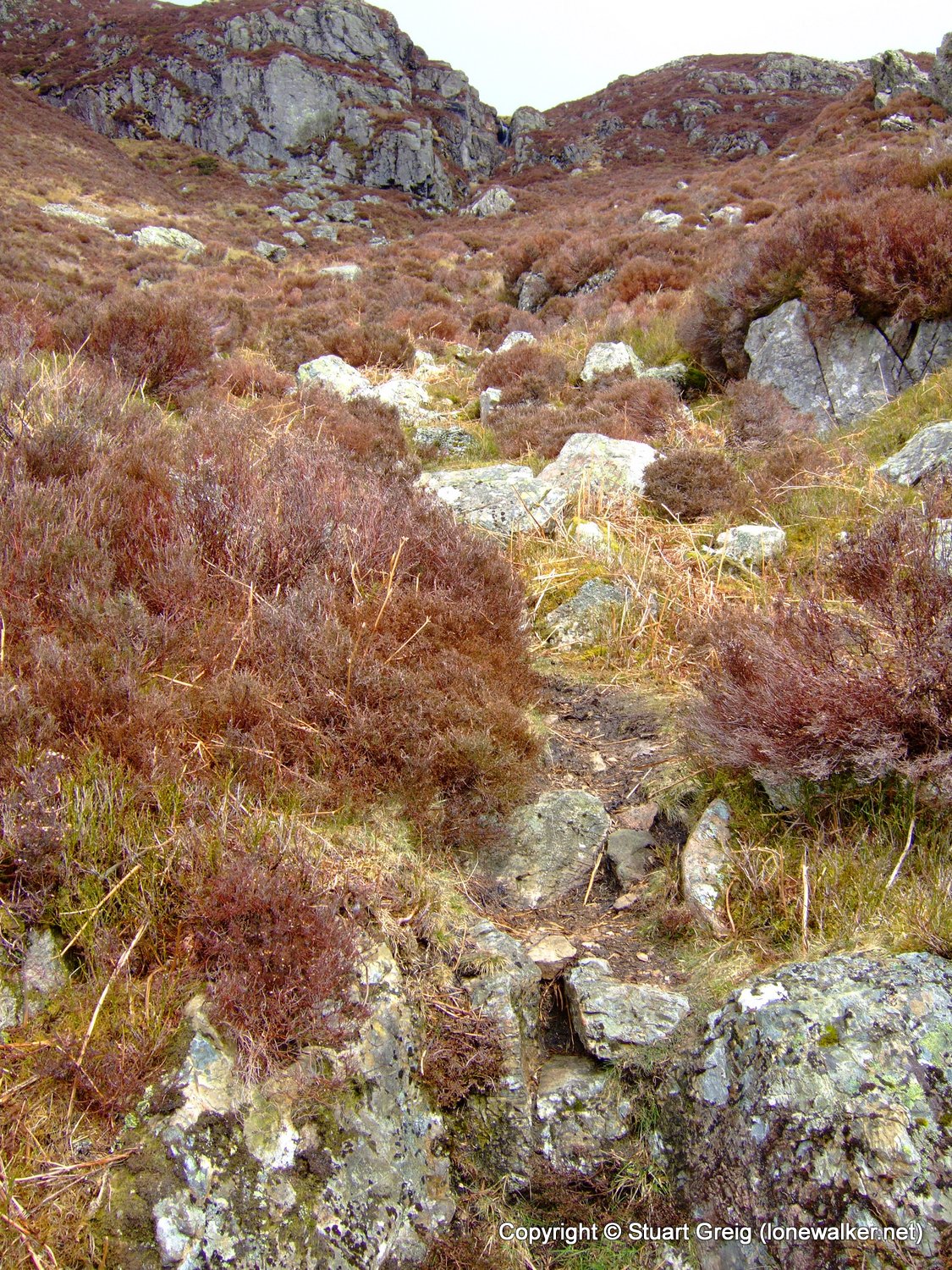 The thin, but easy to follow path twists and turns as it picks it way through the heather beside the beck. It’s quite steep now, but I’m still feeling strong and I’ve not really needed to stop for a gasp yet. In the height of the heather I can imagine this is a wonderfully colourful walk. It’s a bid drab at the moment though. There are many waterfalls along the course of the beck and the path is never far from it. 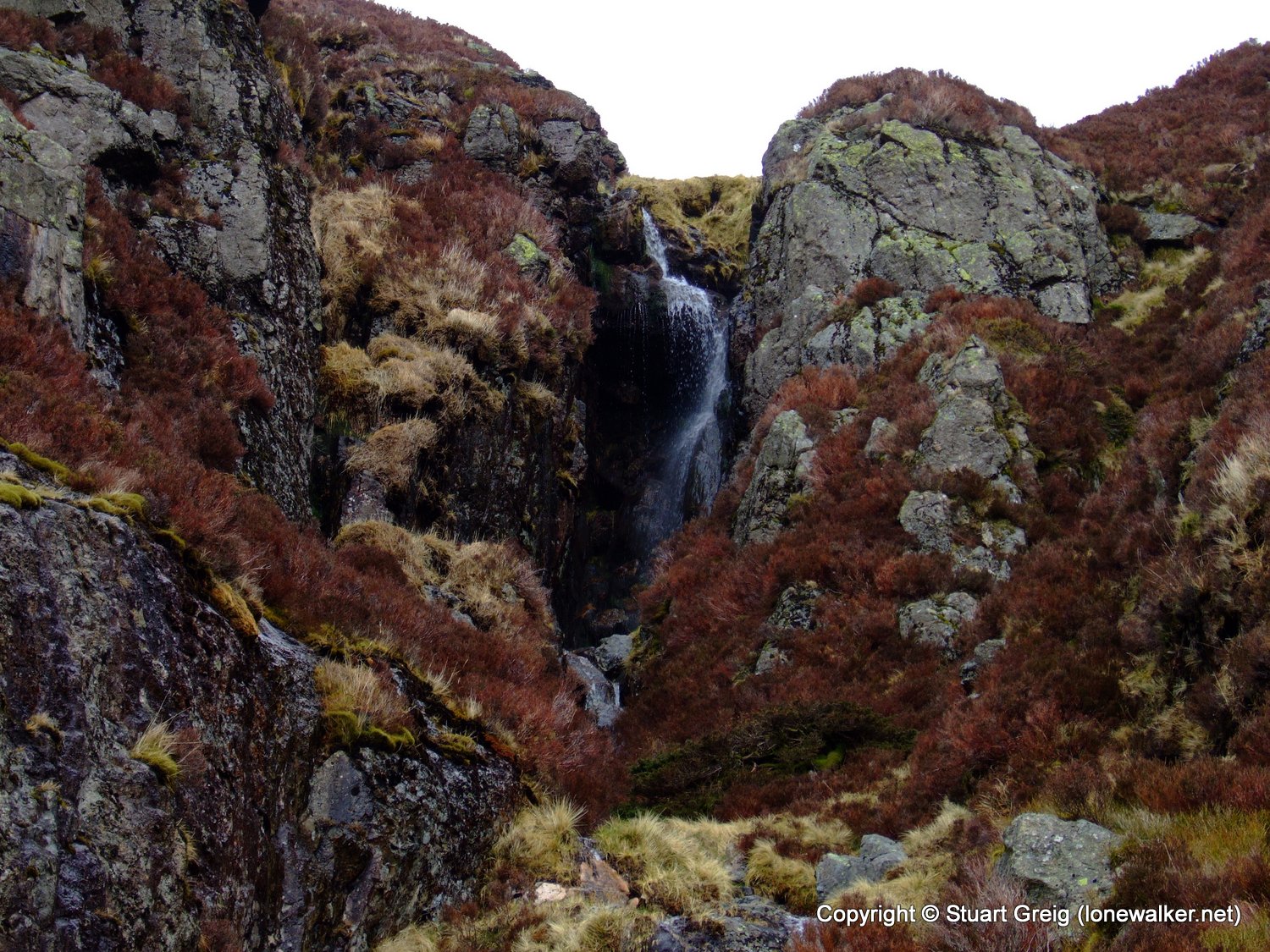 The best waterfall is saved for the last – at the top of the climb as we leave the beck behind us. 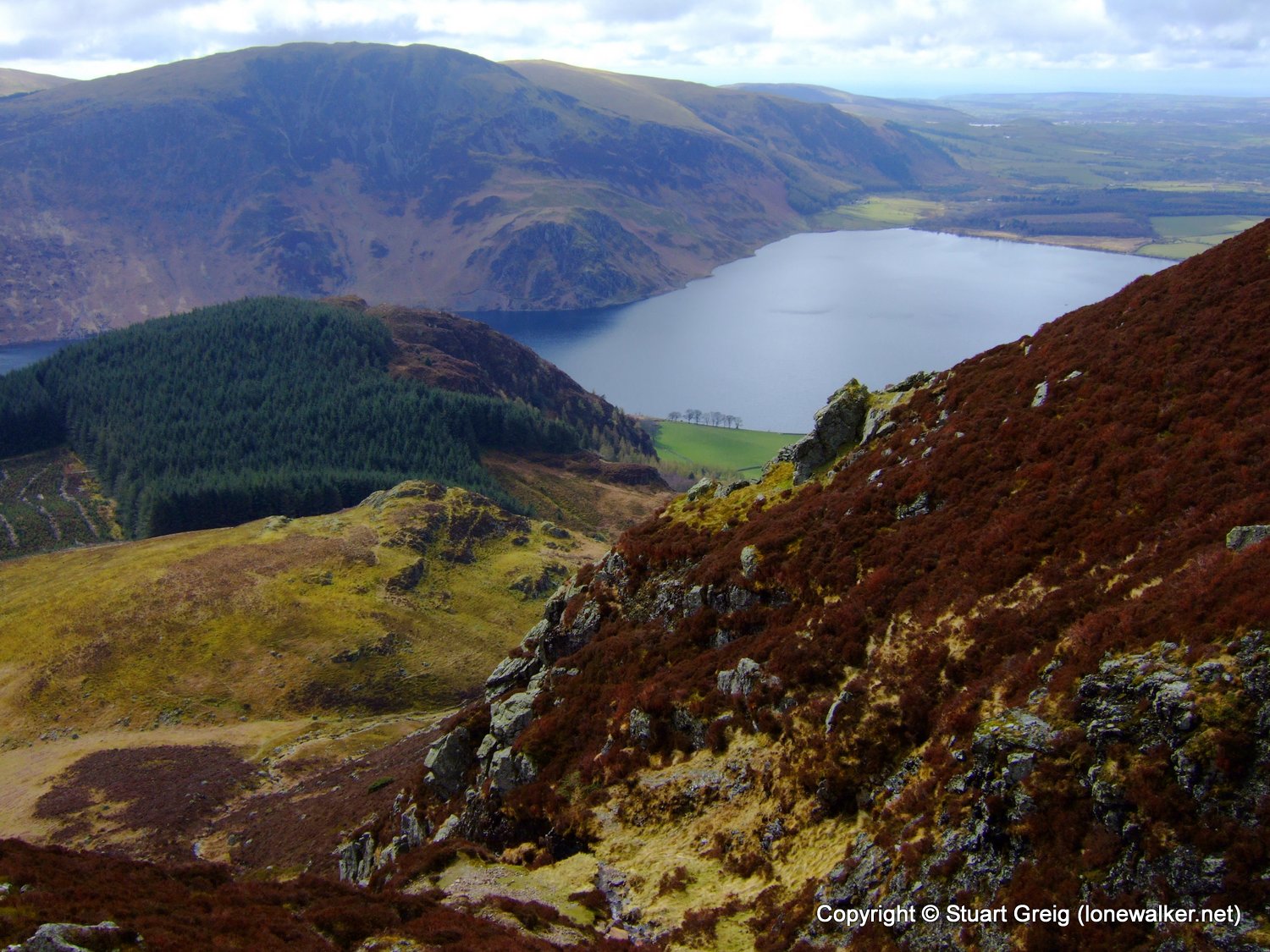 Look back and see the beauty of Ennerdale – I’d taken about 20 photos from this spot, trying to get enough for a panorama. There is a bit of mist in the air though and they don’t come out very well. Bowness Knott is the wooded lump on the near side of Ennerdale, with Crag fell rising above it. 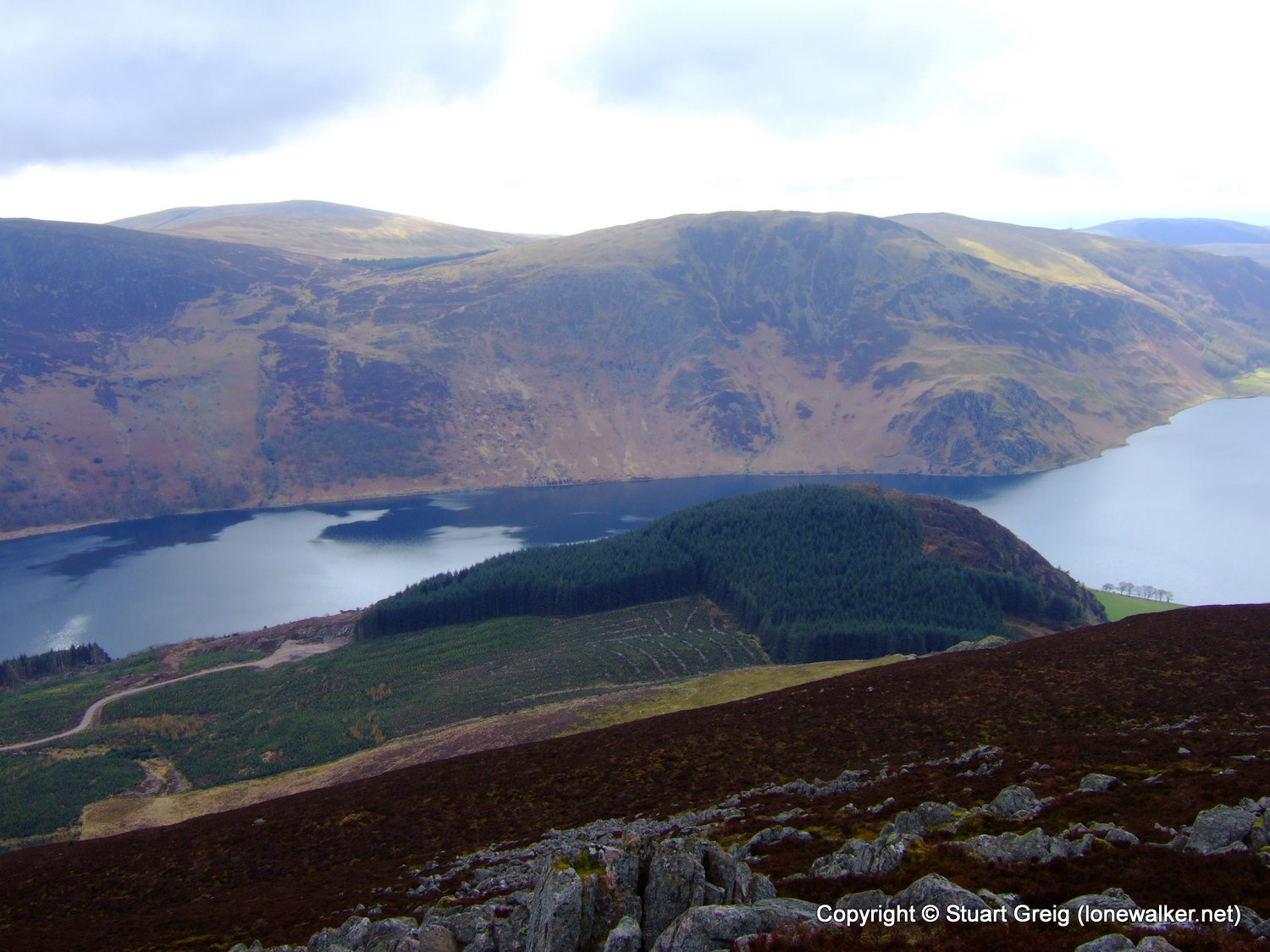 One of the panorama pictures. 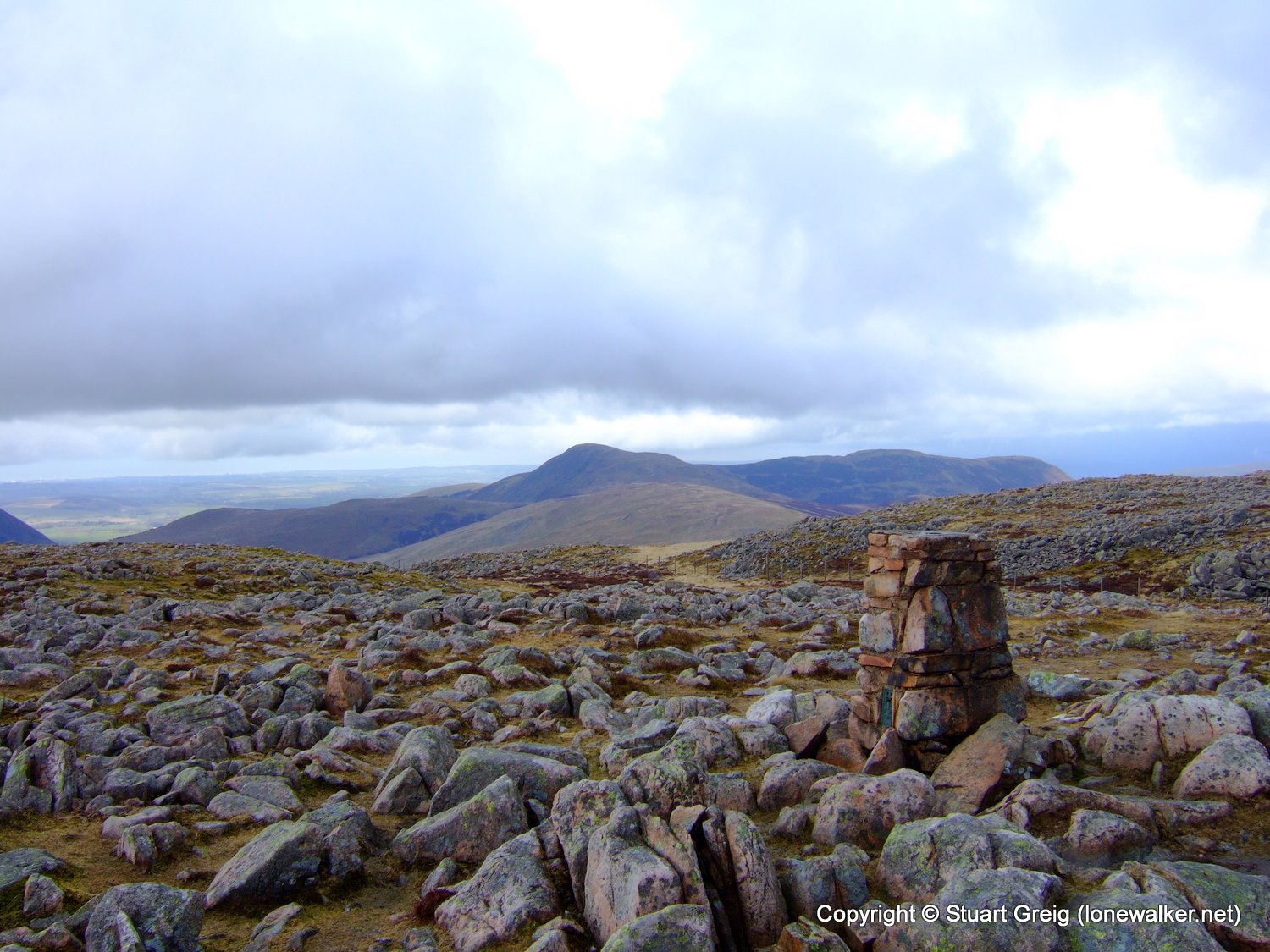 The incredibly rocky summit of Great Borne soon comes into sight and the fells to the north are clear of clouds. 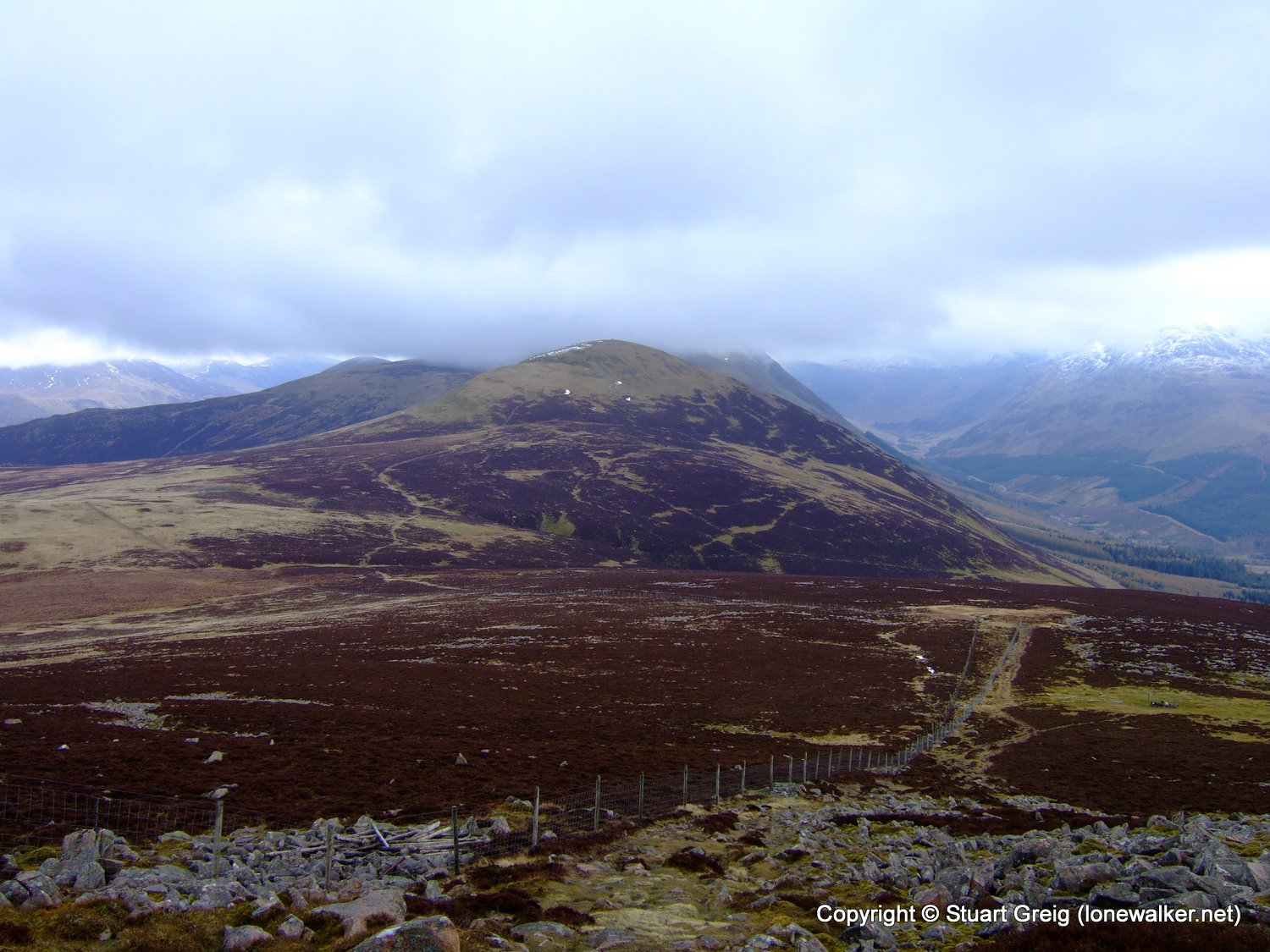 Further along my path we can see Starling Dodd, still holding a little sliver of snow, but red Pike beyond is cloud covered along with the rest of the High Stile range. I follow the fence line for a while before the path cuts across the fell to the foot of Starling Dodd. 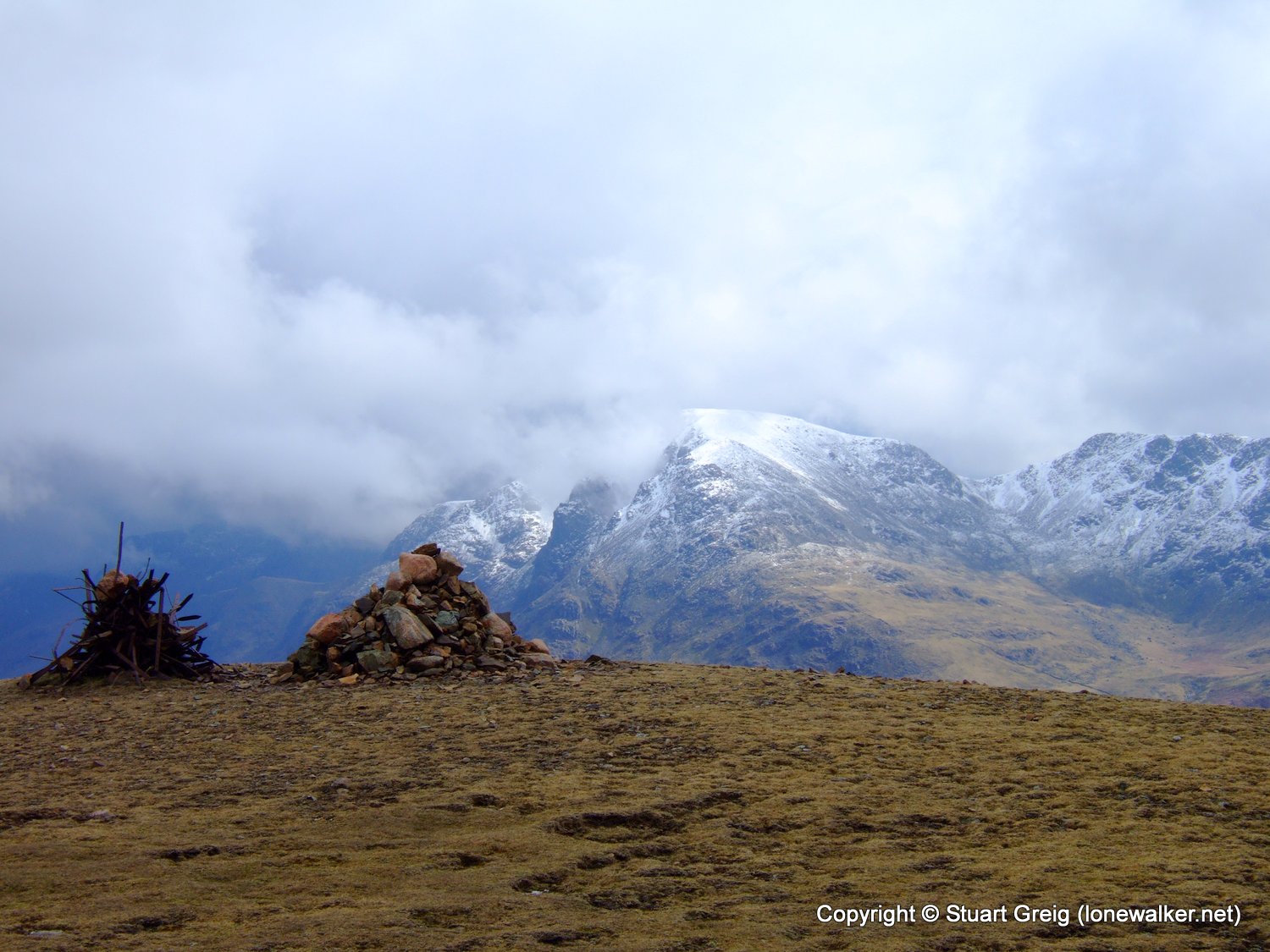 Starling Dodd, only a short distance from great Borne is almost completely rock free. The cairn must be imported to this wide grassy summit. There is also a cairn made from old fence posts and other assorted ironmongery
– much like that on Mardale’s Harter Fell. The summit is dominated by the Pillar group though and the eye is constantly drawn that way. 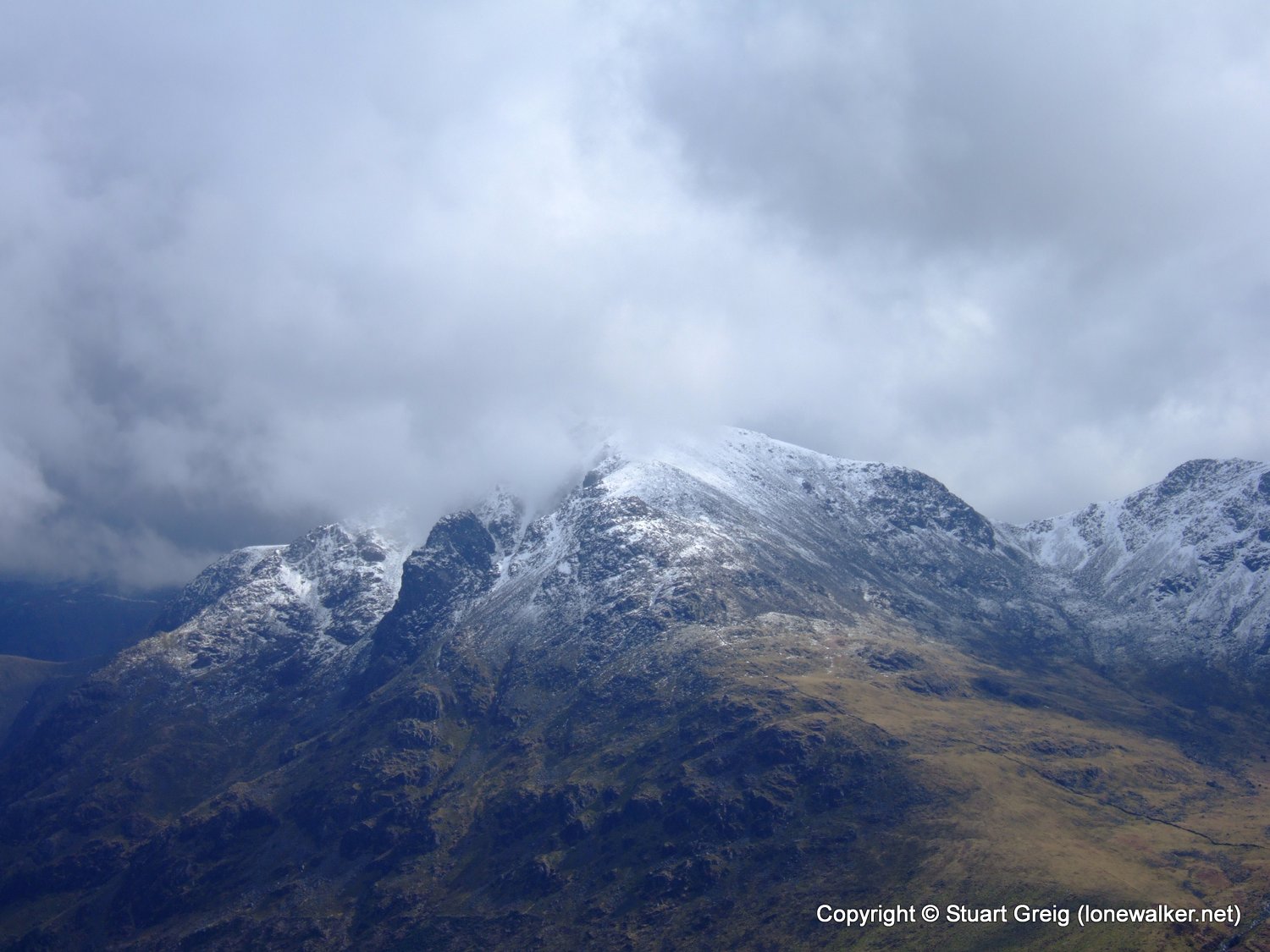 Pillar is covered in cloud for most of this walk, but Pillar Rock is just about visible below the summit. 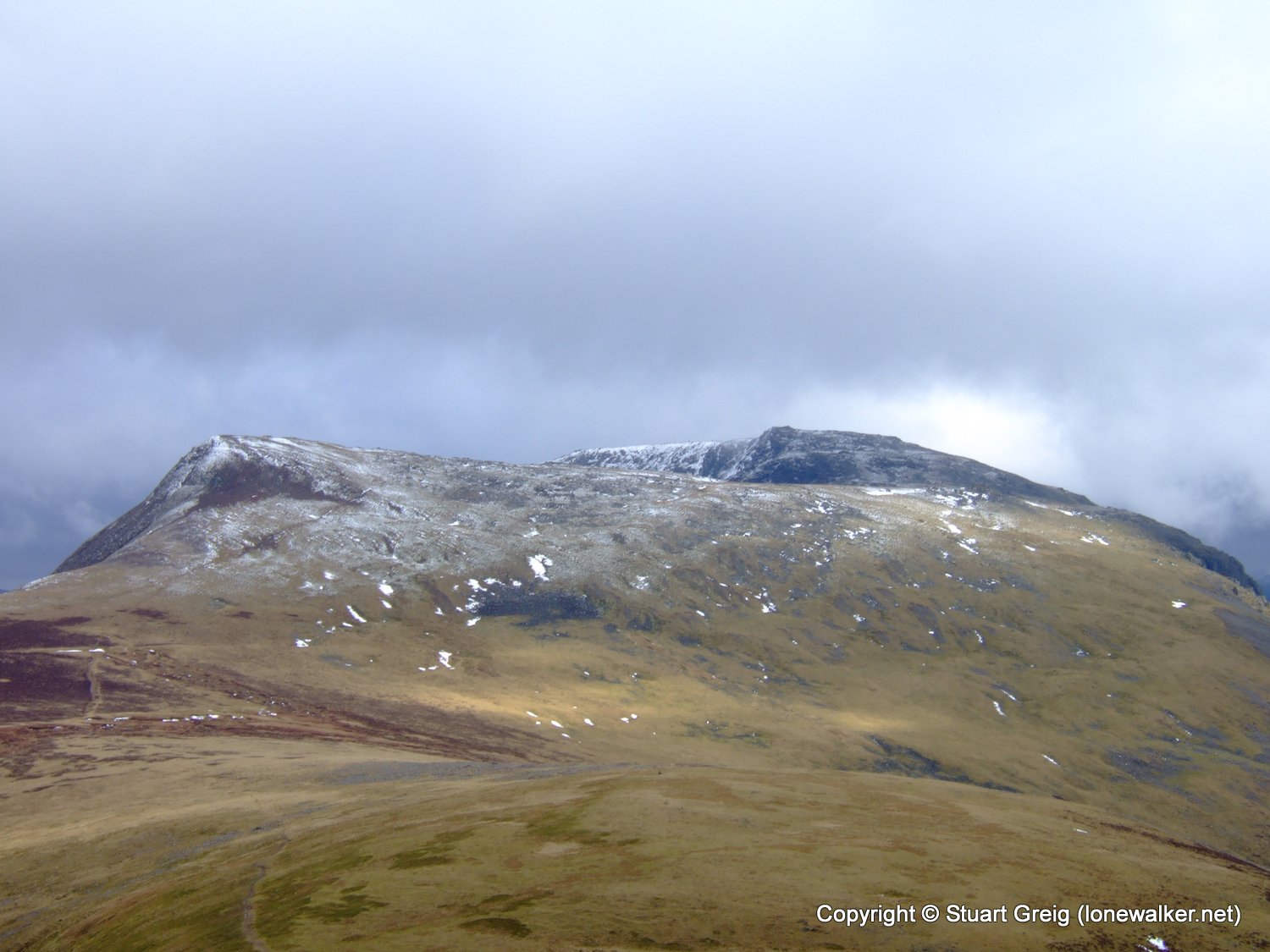 Red Pike summit has cleared in time for me to get a picture of it, with high stile behind. This one taken from the summit of Starling Dodd. Little Dodd and it’s tiny summit cairn of stone and iron poles is just about visible in the centre of the shot.

My route down takes in the summit of Little Dodd and the walk I have planned for tomorrow runs along the ridge line ahead. 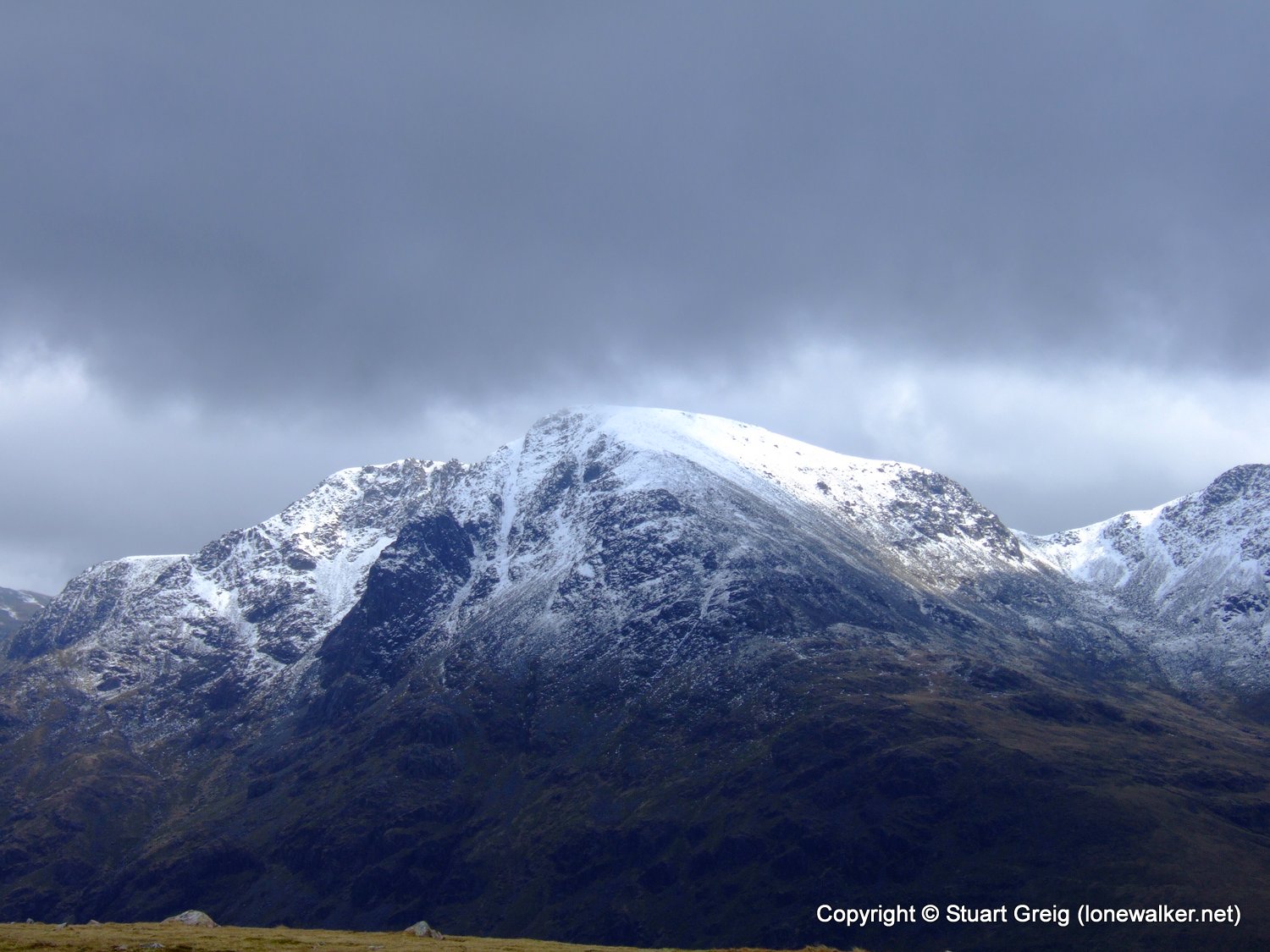 Pillar summit finally sheds its cloud, but not for long – and surely those clouds have more snow in store for it? 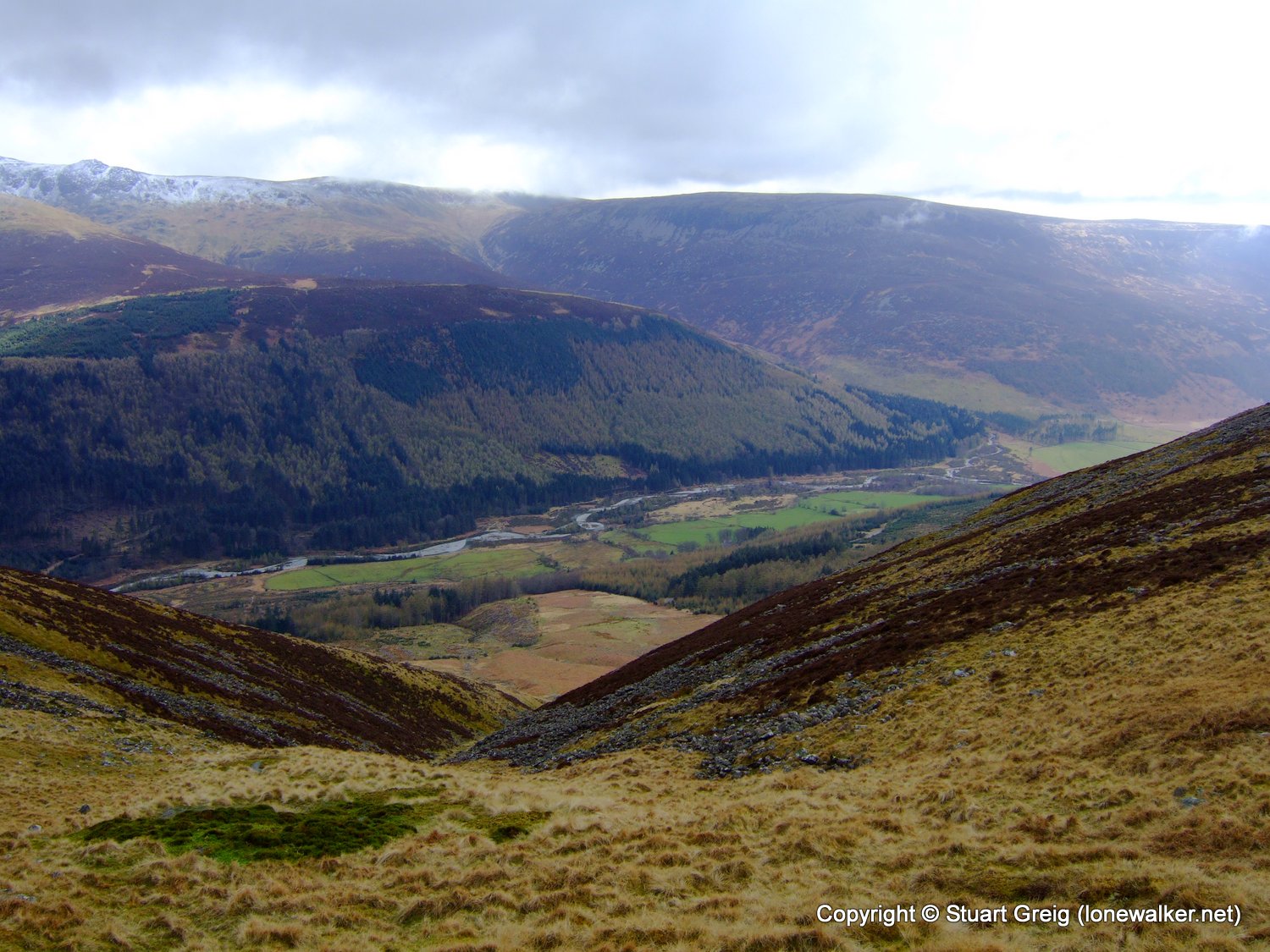 Looking down into Ennerdale valley and the River Liza from the fold of land between Red Pike and Little Dodd. Gillflinter Beck springs from the hillside a little way below me. 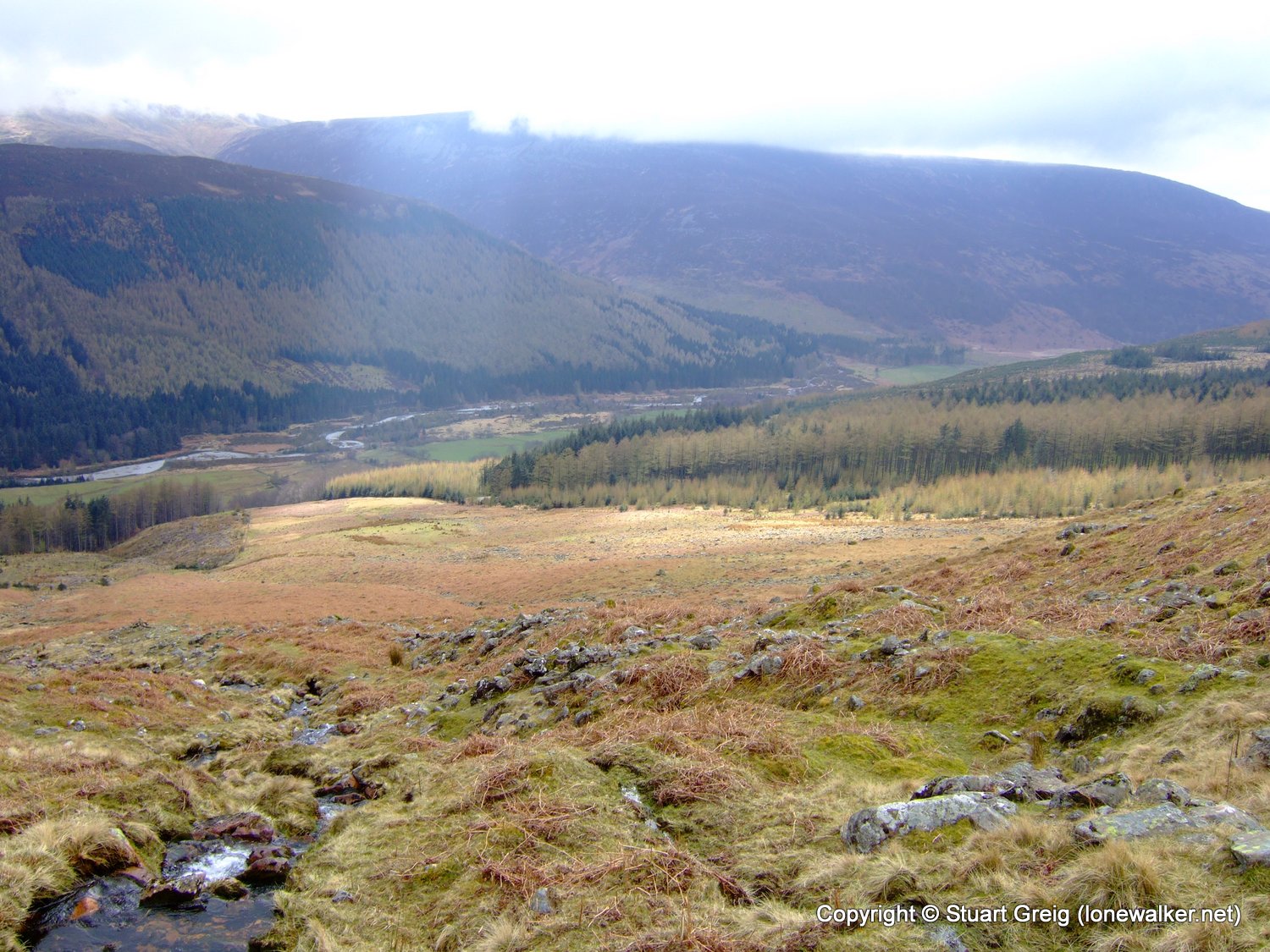 There is a little path beside Gillflinter Beck all the way down to the valley bottom, where the forestry road can be followed back to the car park. Whilst planning the route on Memory Map however, I’d spotted a possible alternative track back, through the forest above Latterbarrow, picking up a track beside Smithy Beck. A walk along forest tracks through the trees seemed preferable to a drab road walk. 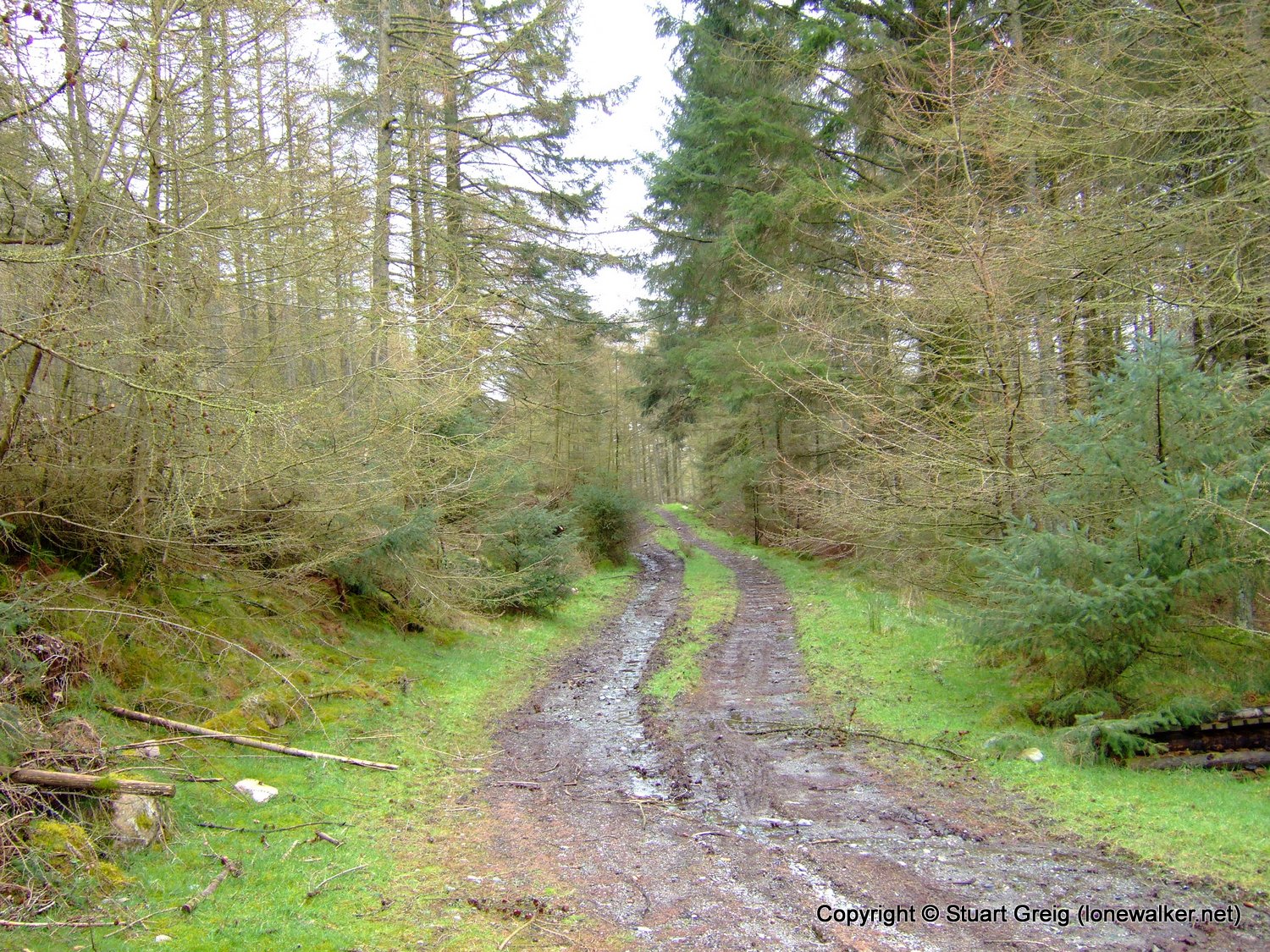 Although much of the track has been churned heavily by recent logging activity, it is still a fairly good track for walkers. There are one or two notices from the forestry contractors telling you to proceed no further, but as there was no-one around to ask if that applied to me too, I just pressed on. To be fair these were at the early stages of the path where most of the logging activity had been going on – and does not apply to the Smithy Beck Trail, which is clearly posted and an obviously official, easy to follow trail. 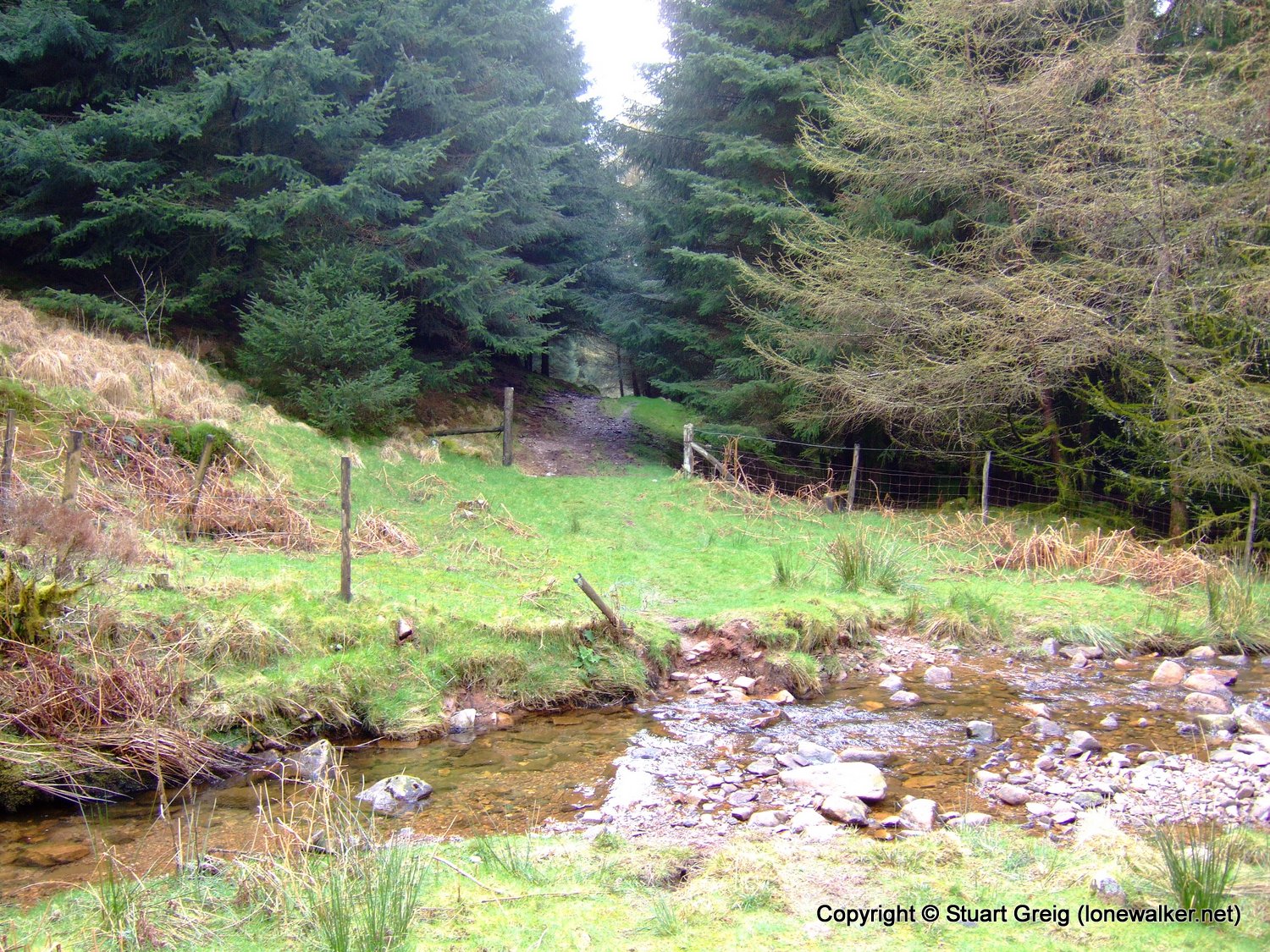 Continue along these charming forest tracks, past secluded becks 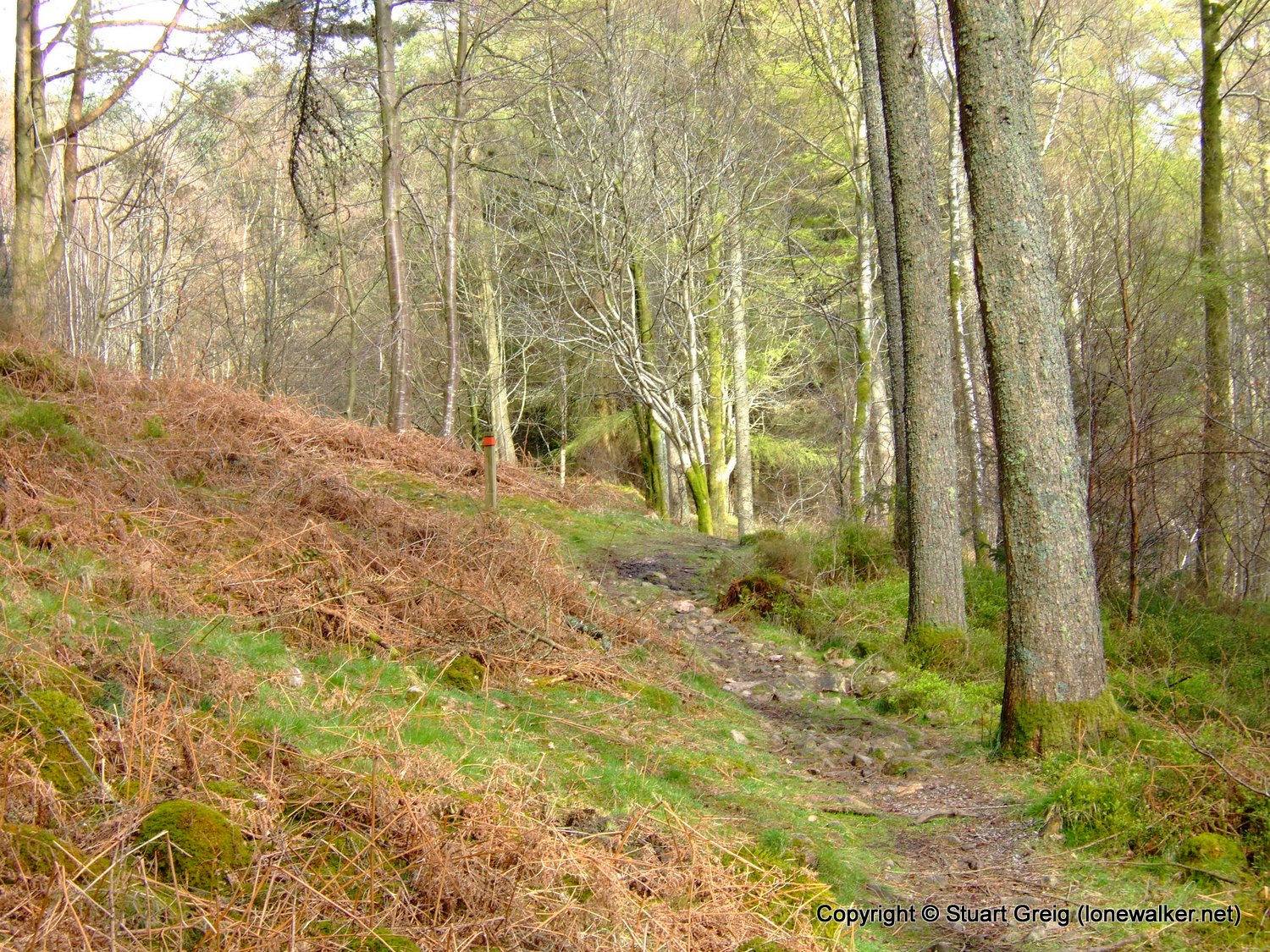 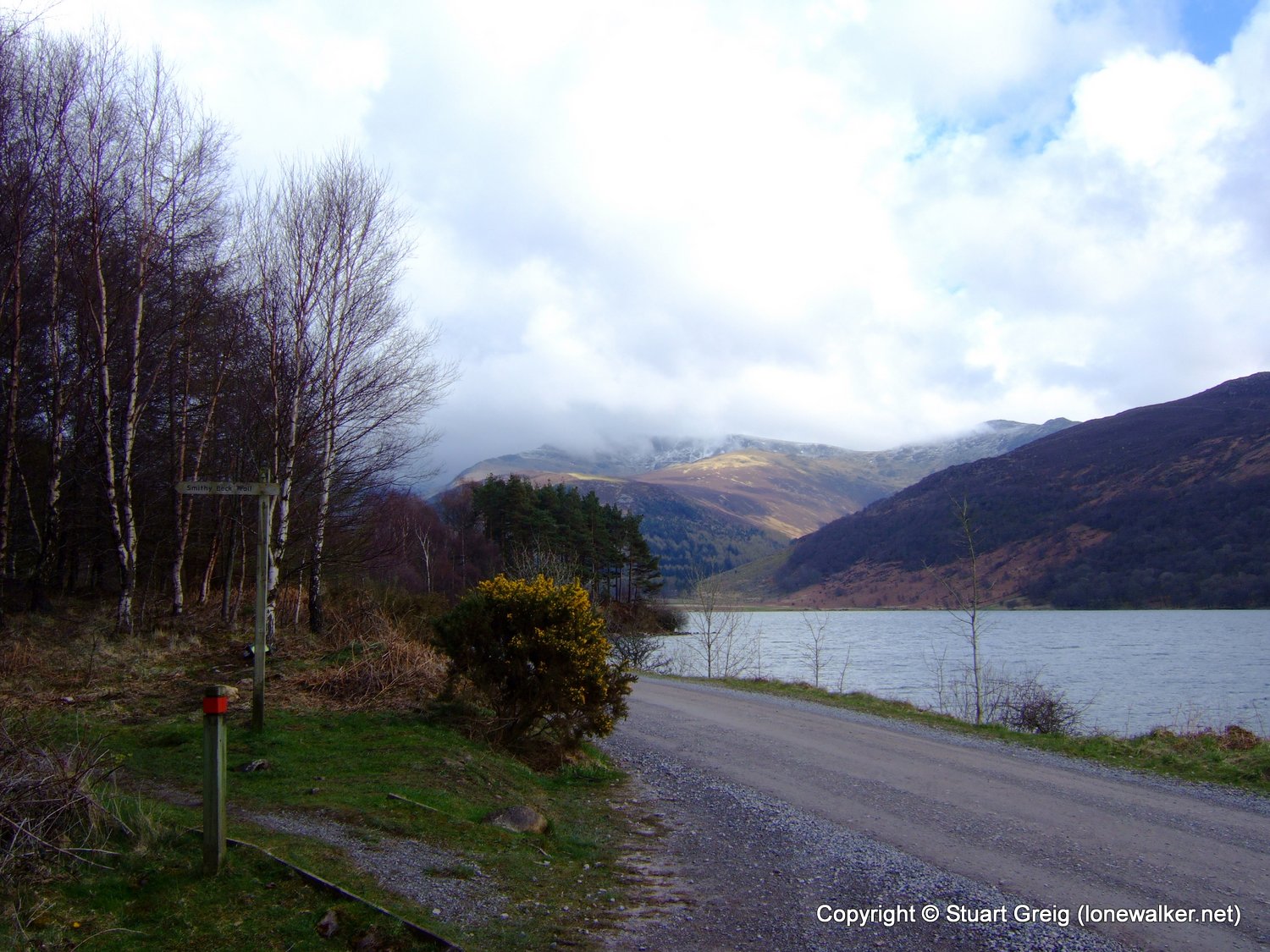 The start of the Smithy Beck Trail, from the road beside Ennerdale Water 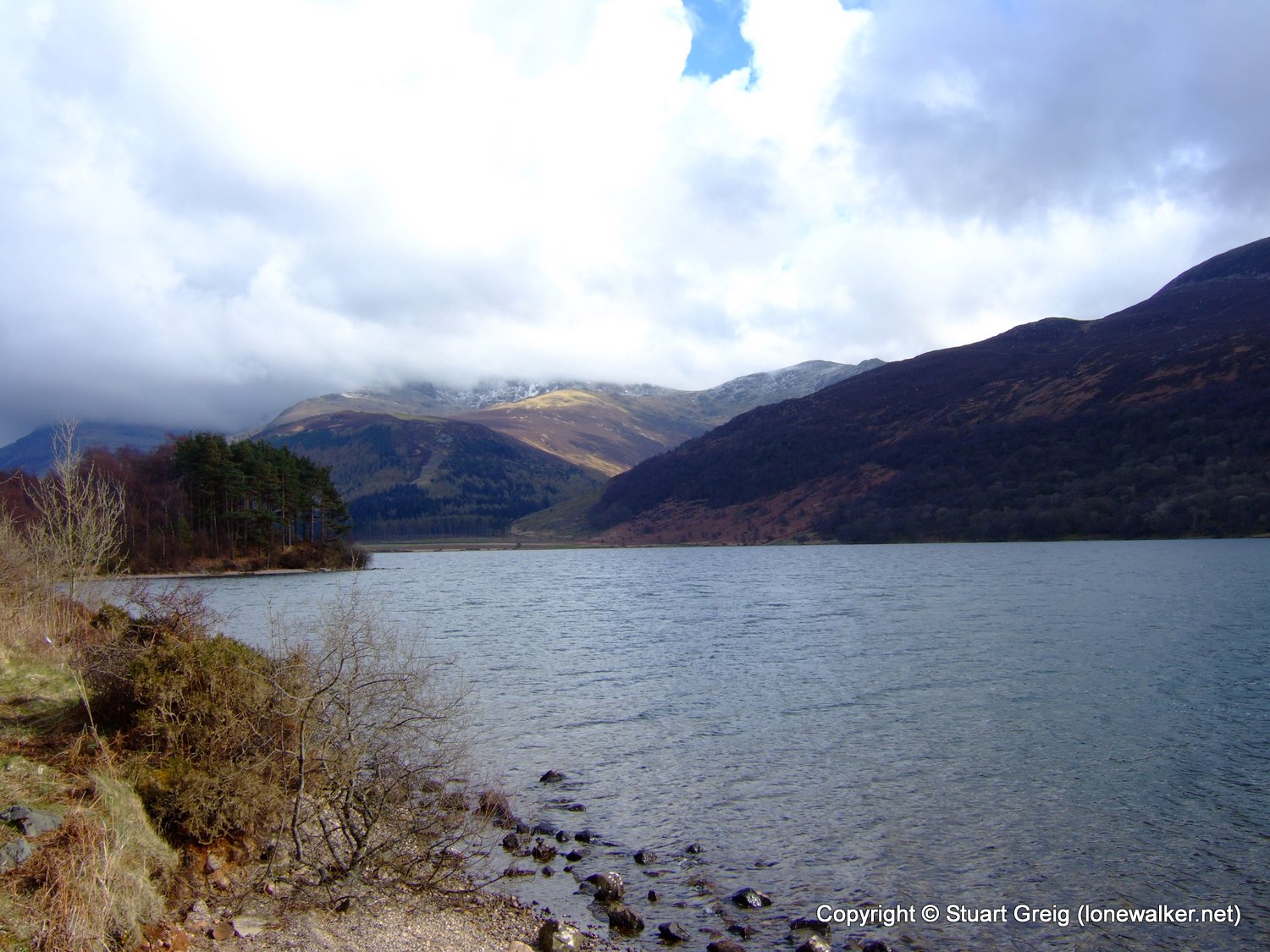 Looking back along Ennerdale Water towards Pillar.

When I returned to the car park, the old guy I met at the start of the walk was sitting in his car enjoying a flask of tea/coffee. When he saw me he jumped out and thanked me profusely for the assistance in finding the path to Bowness Knott. He’s had a great afternoon collecting rock sample apparently and felt he owed it all to me.

I managed to find a bed for the night without too much trouble, in the Fox and Hounds in Ennerdale Bridge and also managed to beat them down on price, which is always possible when you turn up on the night and they have rooms free.