When Tex asked me to select a route taking in Great Gable for a walk he was planning with a friend of his, I immediately went in blackmail mode and told him I would select a super route and guarantee perfect weather as long as I could come along. He reluctantly agreed, obviously disappointed not to be having a day on the hills without me and the deal got even more one sided when I told him the aircon on my car was broken and would he mind driving as well?

So it was a rather glum Tex that arrived to pick me up at 07:15 on what was turning into a glorious summer’s day. Tex’s friend Mark had requested the Great Gable walk, somewhat at random it would seem, but also somewhere that he hadn’t walked before. My suggested route took us up Grey Knotts to Brandreth then across Green Gable to Great Gable, from where we could take in Haystack and Fleetwith Pike if we had time and fuel in the tanks, otherwise cutting back to the Honister via the Coast to Coast path.

We arrived at Honister and were walking by 10:00. The weather was glorious. Hardly a cloud in the sky, bright sunshine, not much wind in the car park, but lots of haze in the distance making for murky views beyond a couple of miles. 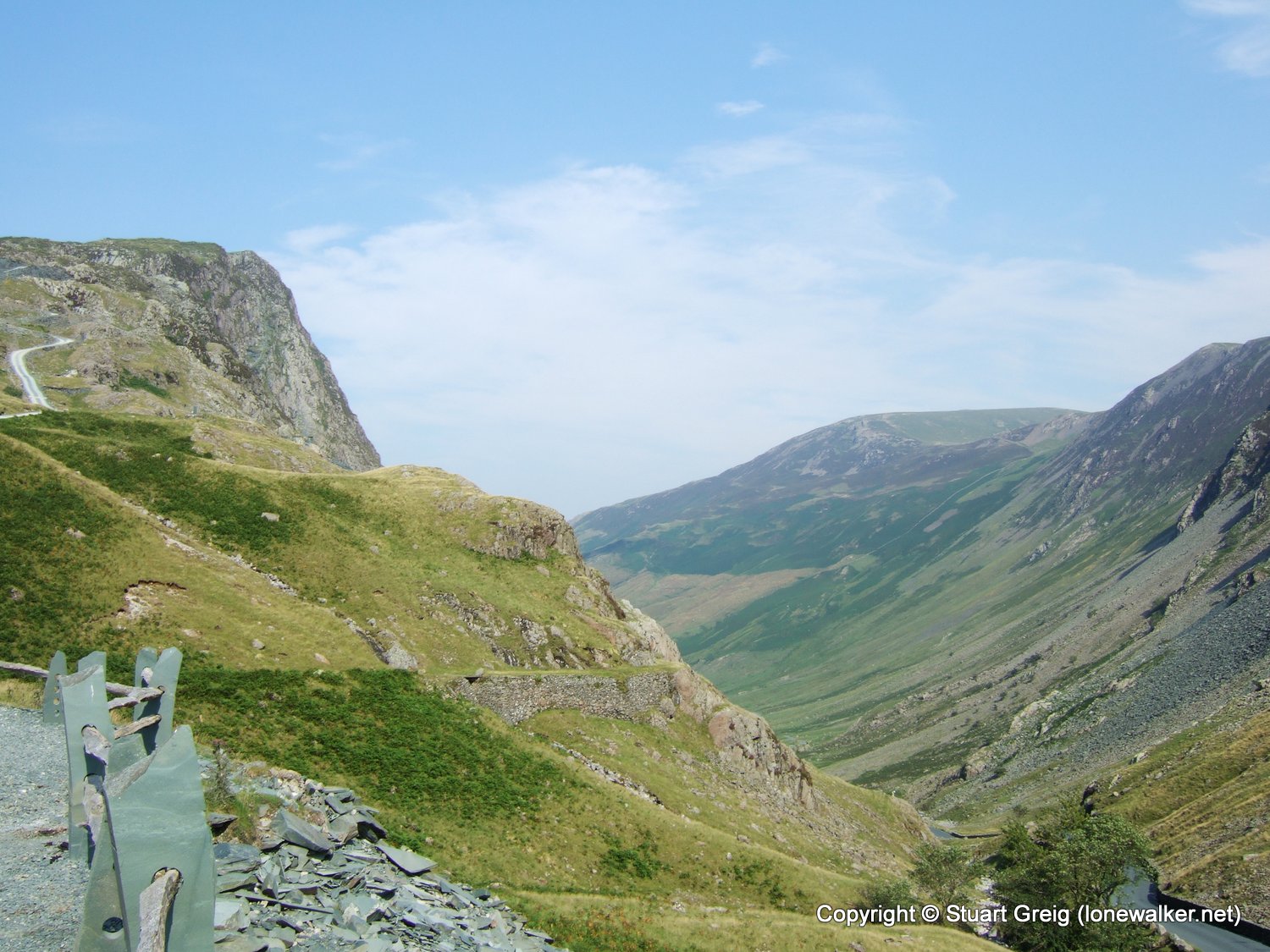 Looking down Honister Pass, Honister Crag on left, from the edge of the car park at the Slate Mine

Honister Slate Mine is a great place. I have fond memories of it from my visit during my Coast to Coast walk a couple of years ago. At the time they had a small area put aside for a tea and coffee facility and you paid in an honesty box for the refreshments you used. I’d had a rather damp walk in from Loft Beck and was glad of the warmth and comfort of the place. Now they have a more traditional cafe bar in the main building, with the permanent smell of bacon frying in the background. Fantastic.

Everything at Honister is made from slate, everything that could be made from the material is made from it. The picture above shows some of the railings in the car park – made from slate. All the steps and footpaths, most of the main building and surrounding sheds are slate built or slate clad – like I said it’s a great place. 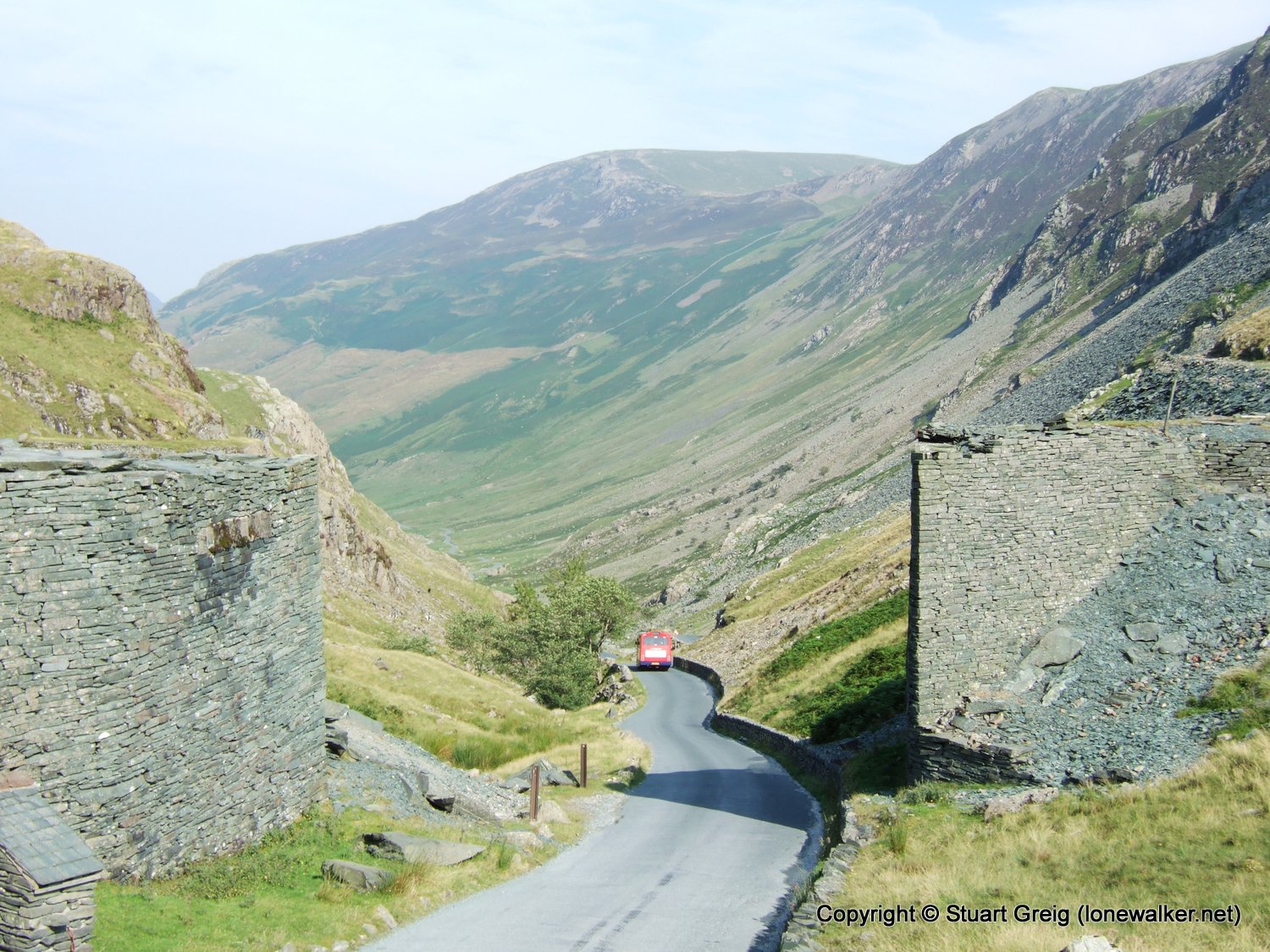 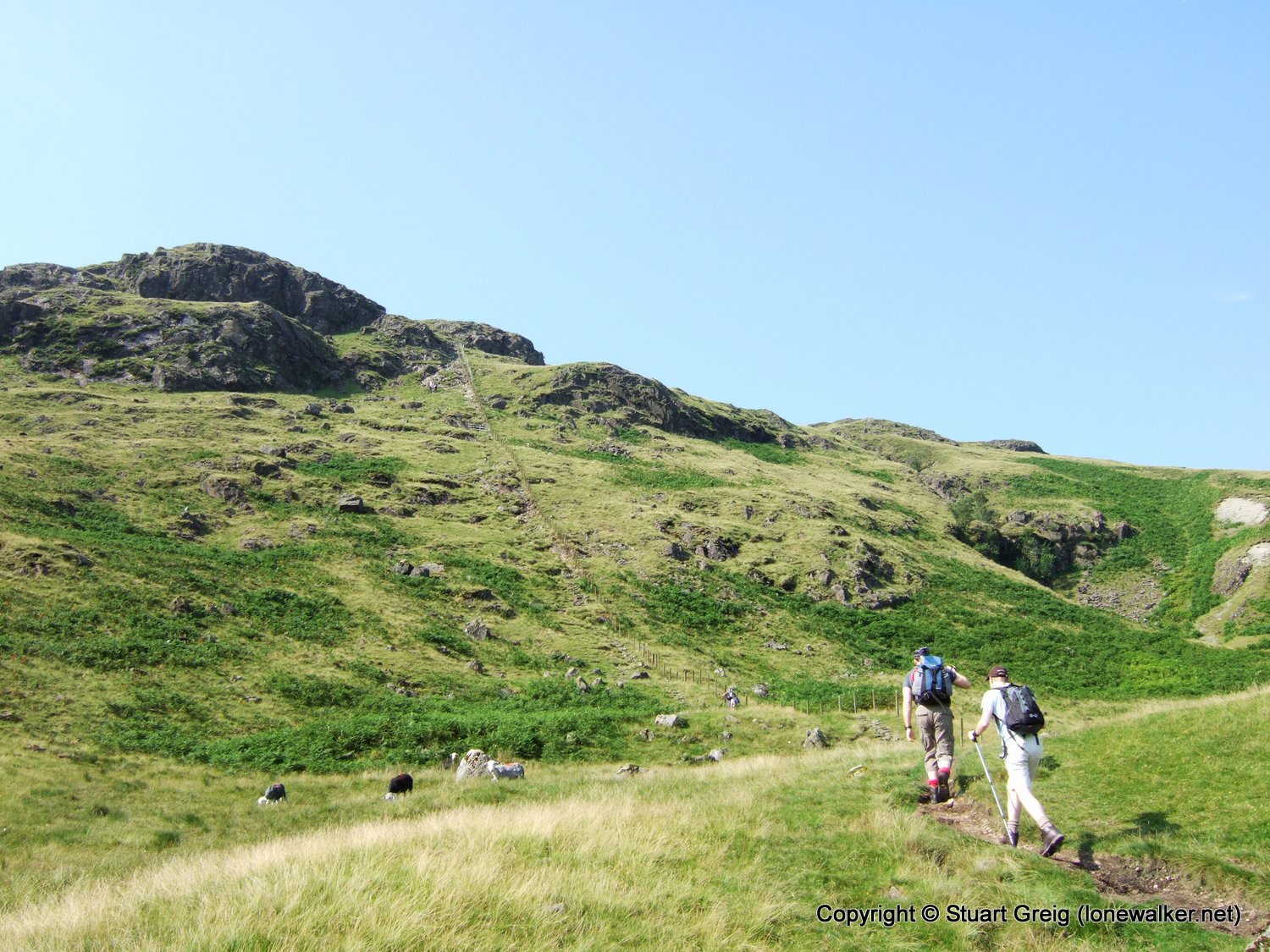 Heading up the path to Grey Knotts

There was no limbering walk-in today, we were straight out of the car park and up the steep incline towards Grey Knotts. Tex set a fast pace up the hill and Mark and I followed as best we could. We leap-frogged a couple of walkers several times as our rest stops alternated on the way to the summit, it’s quite a steep summit without any preamble. 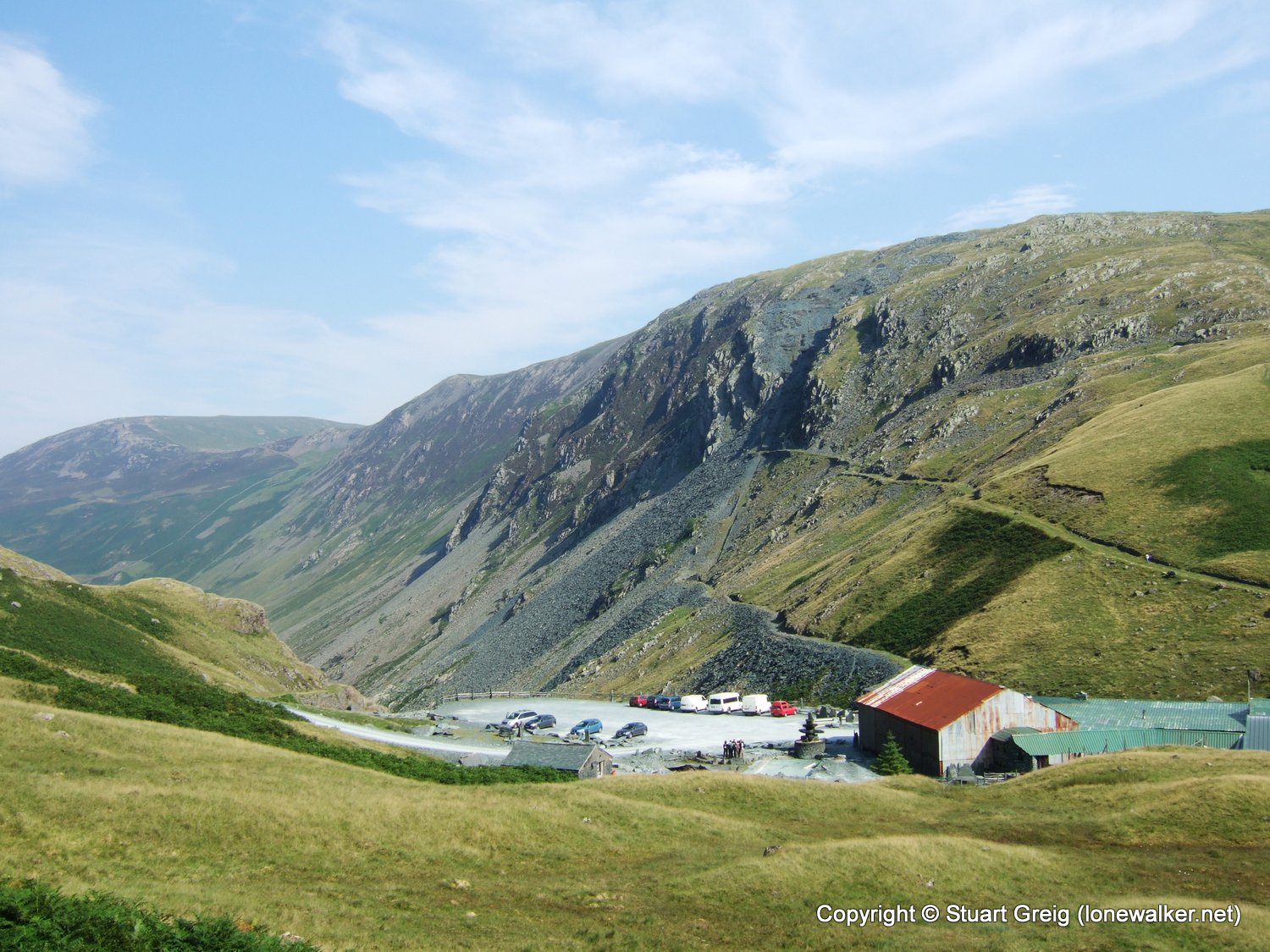 I took the odd gasping photo stop, but the long shots were always going to be somewhat hampered by the haze in the air. At one point we stopped for a breather and a small black turbo-prop plane with RAF markings flew low along the valley before buzzing around the hills for a couple of minutes. A short while later we heard a large crump as an explosion aided the slate mining process. 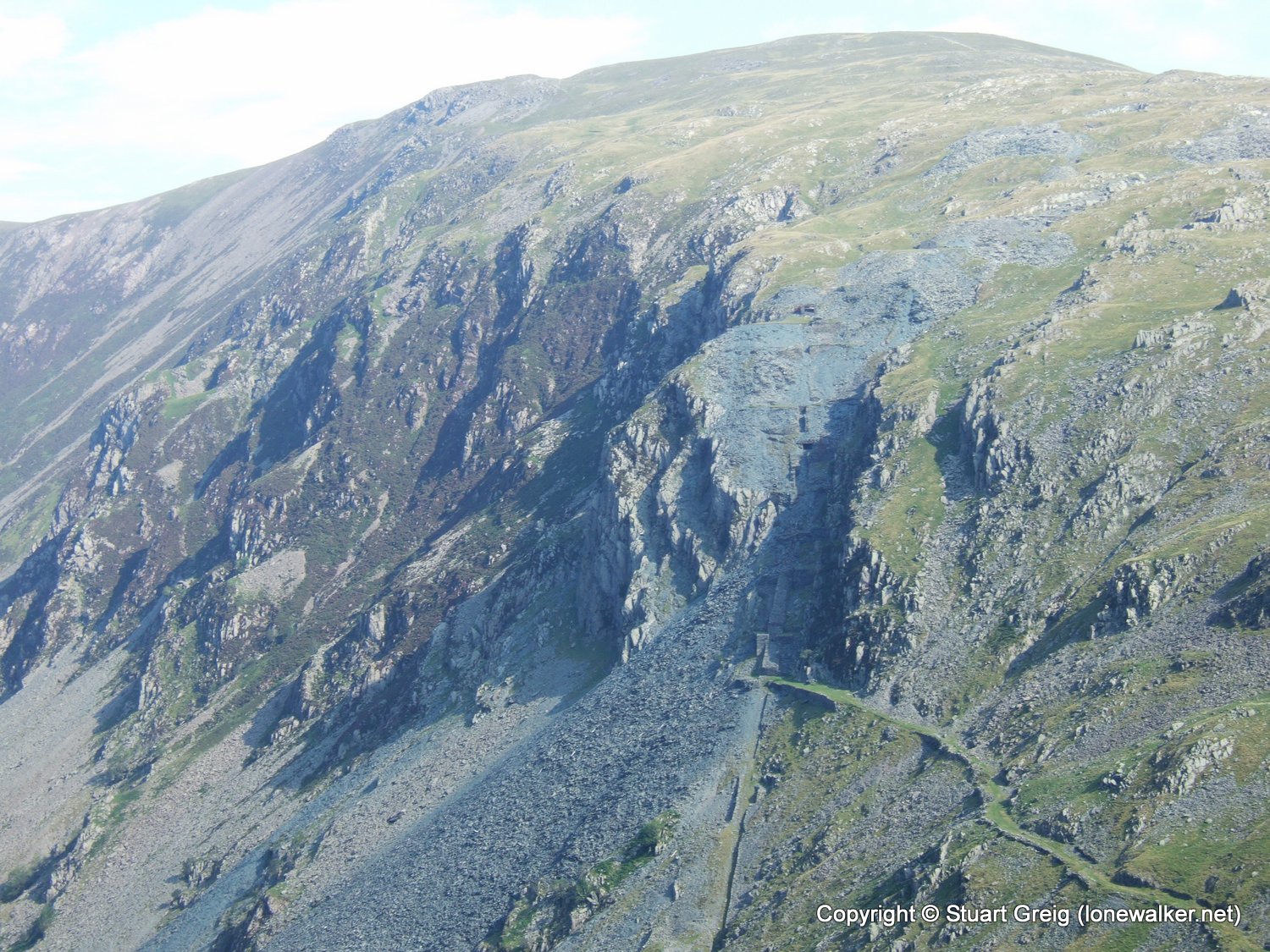 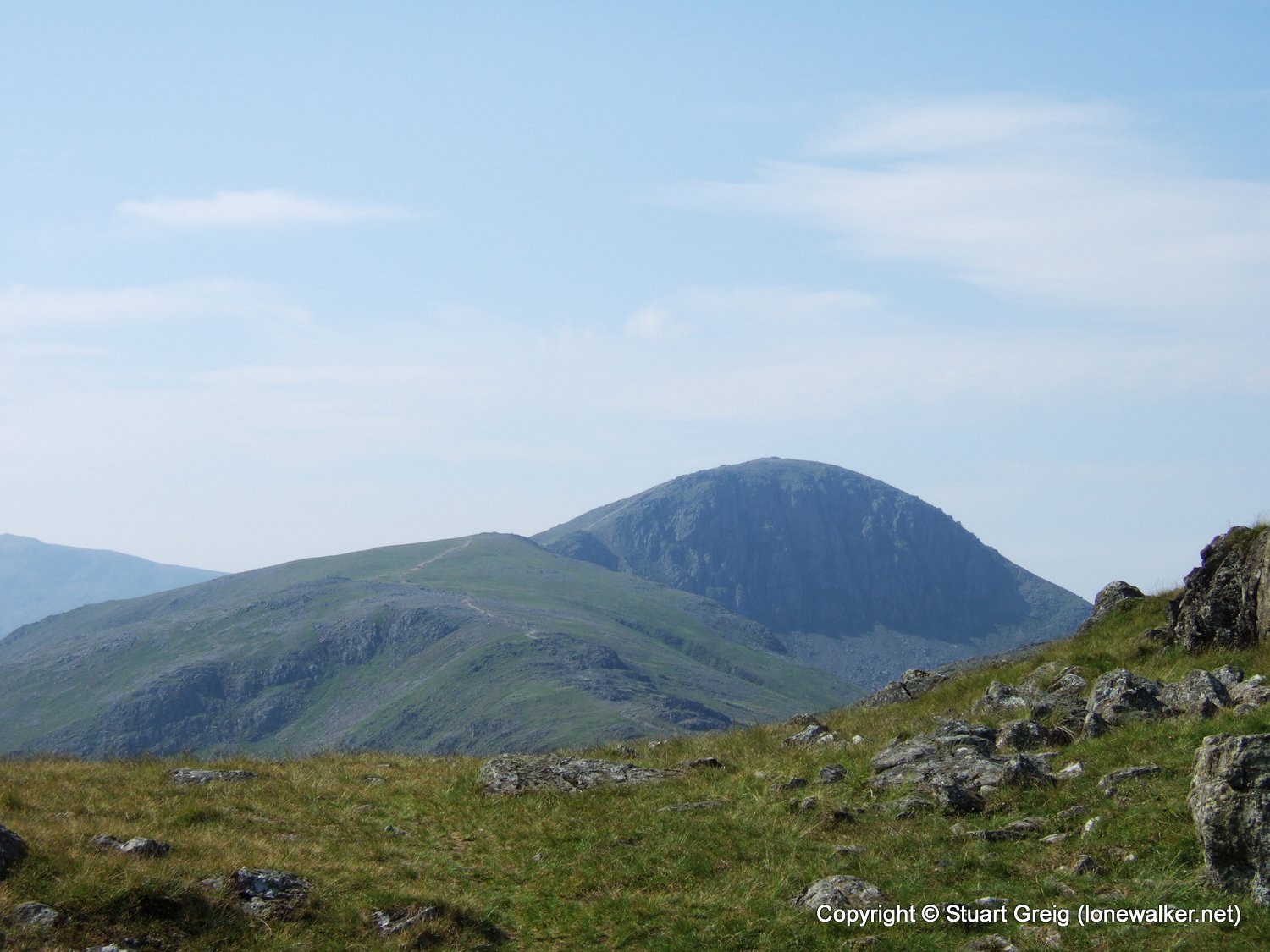 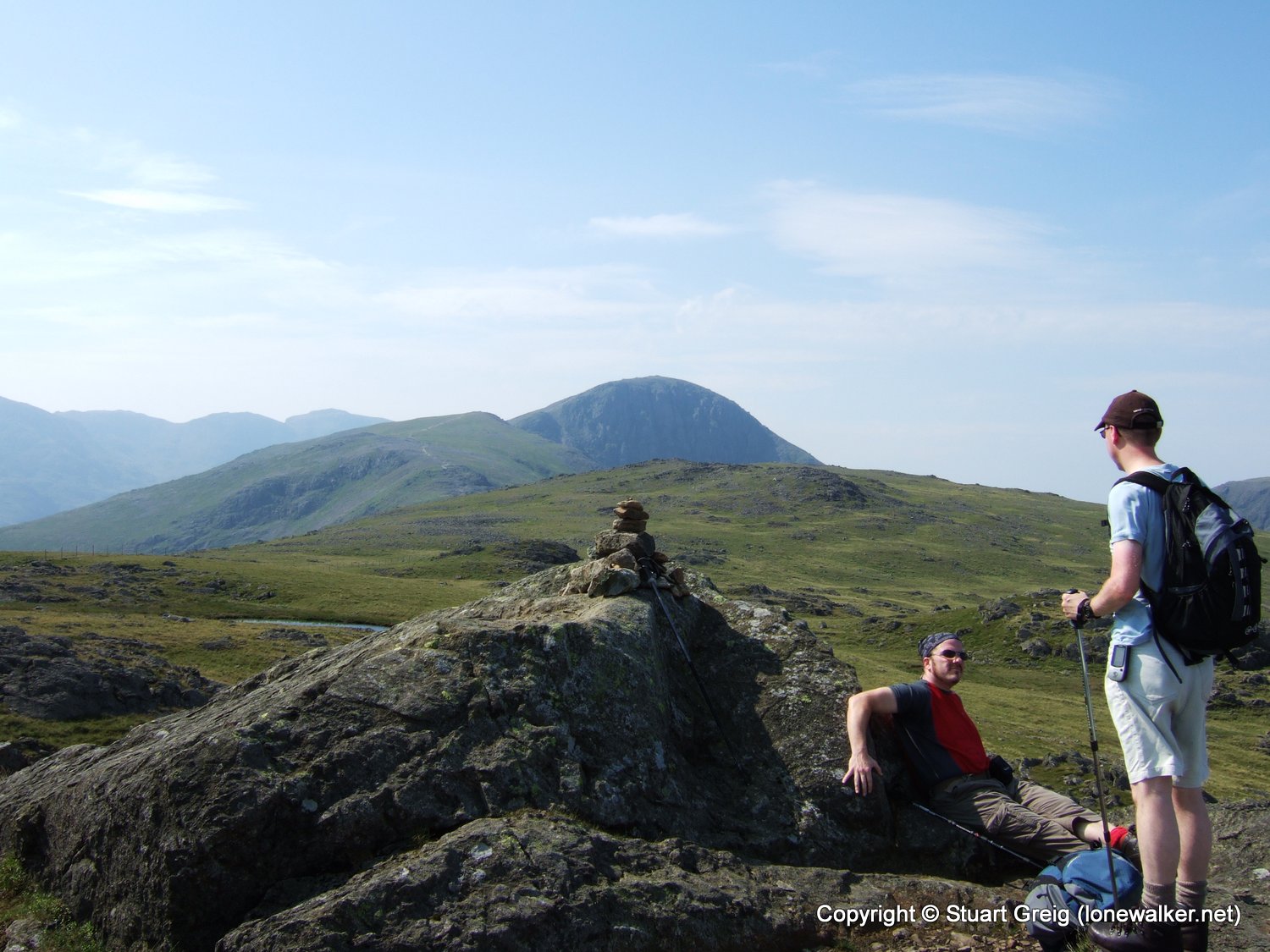 Tex and Mark relaxing on the summit of Grey Knotts

We soon crested the summit of Grey Knotts and had our first views of Great Gable in the distance. It seemed to tower above the landscape, looking formidable even at this distance. At least it made navigation easy, we only had to follow our noses to reach it. 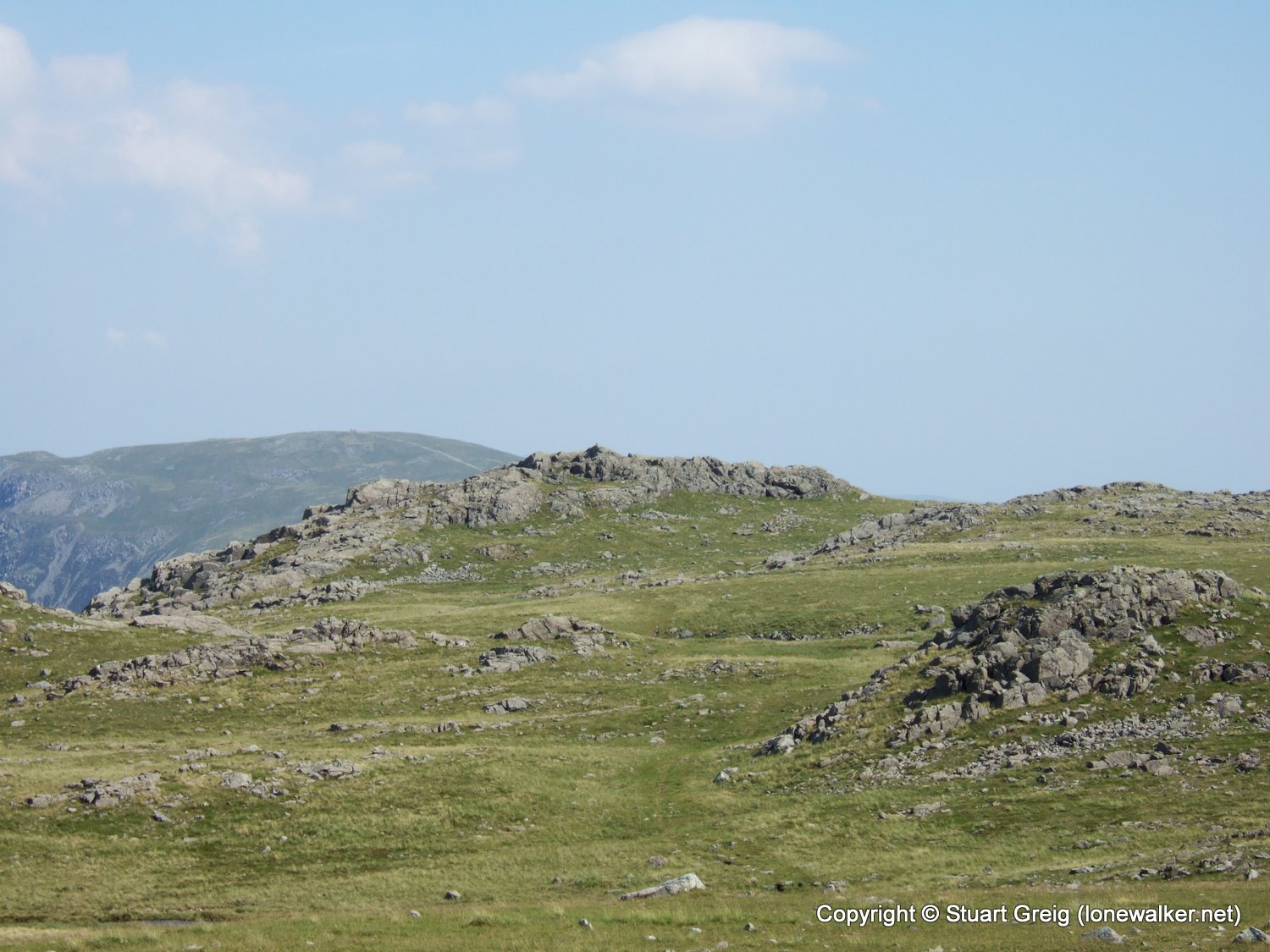 Looking back to Grey Knotts 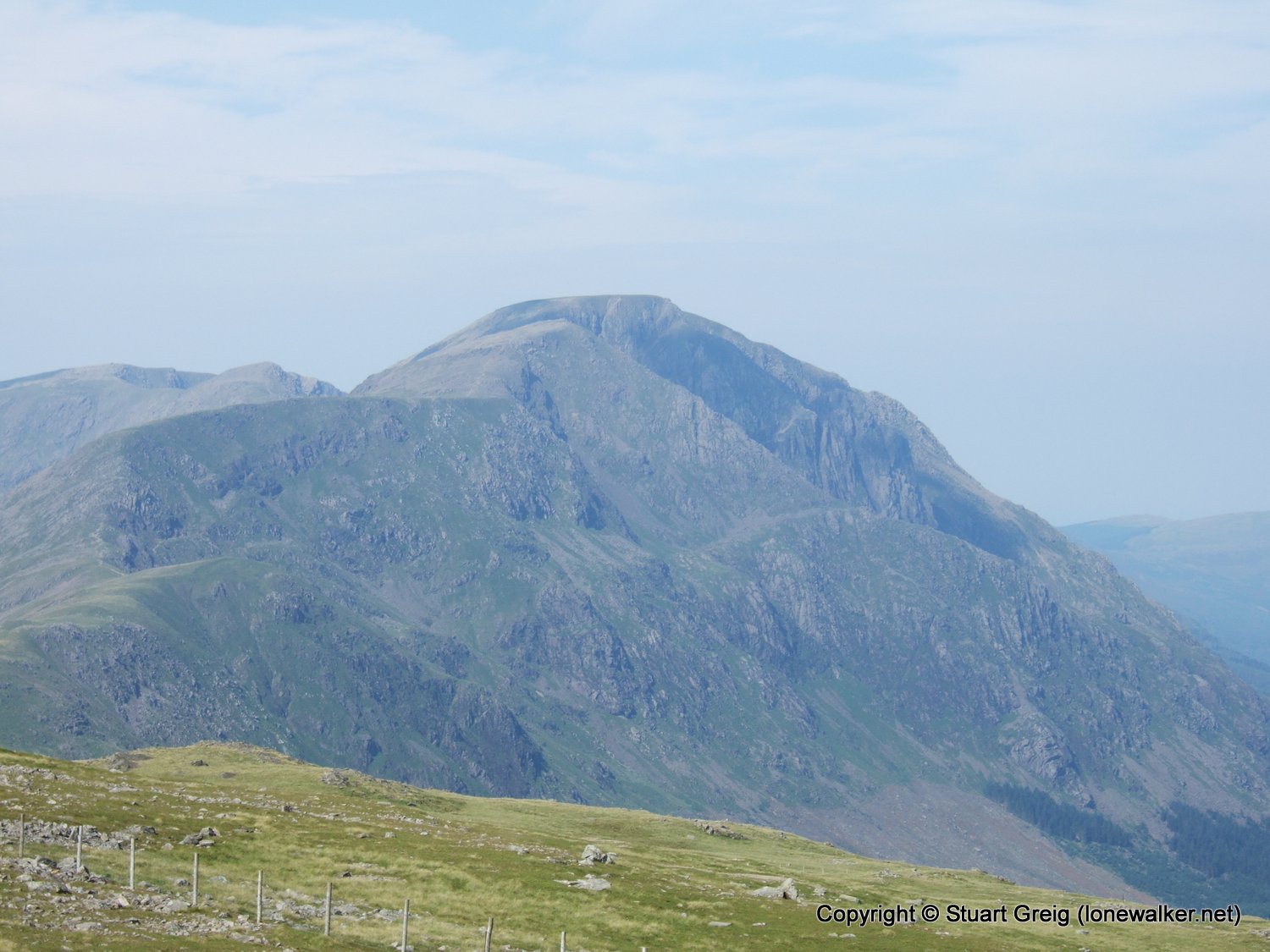 I don’t think there are many places I have walked in the Lakes, so far, that provide such splendid views of so many valleys in such a short time. 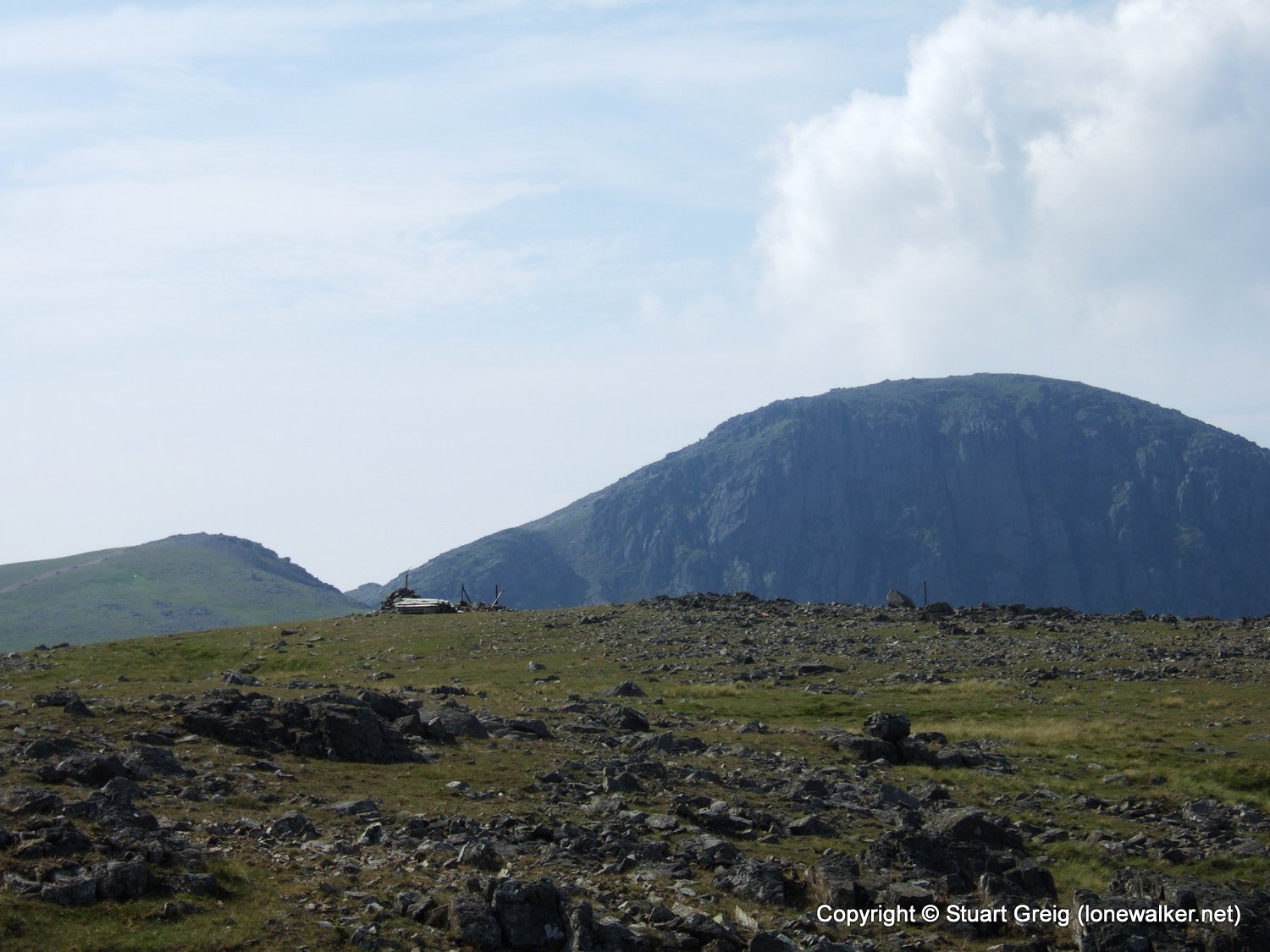 The summit of Brandreth with Great Gable behind 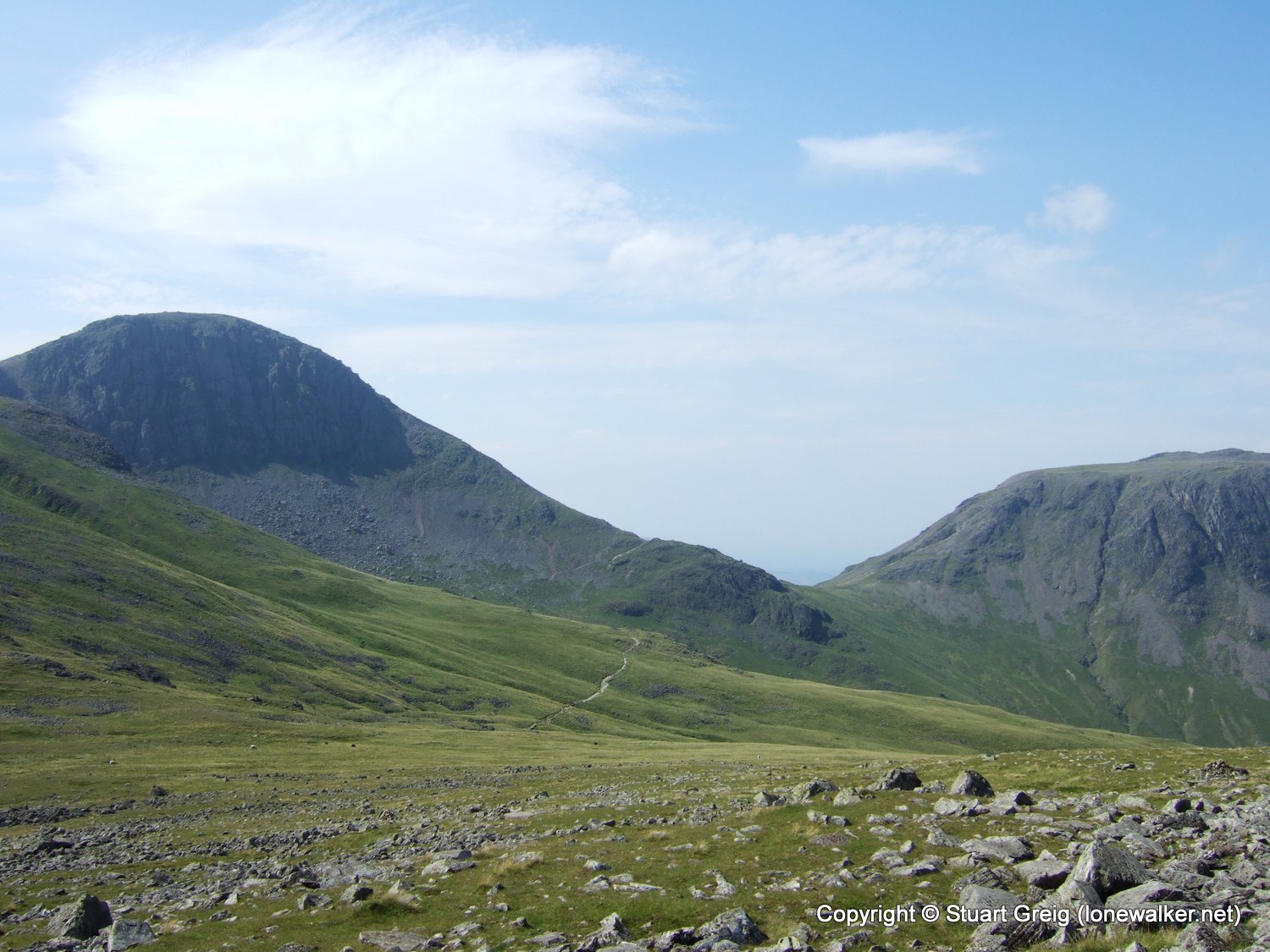 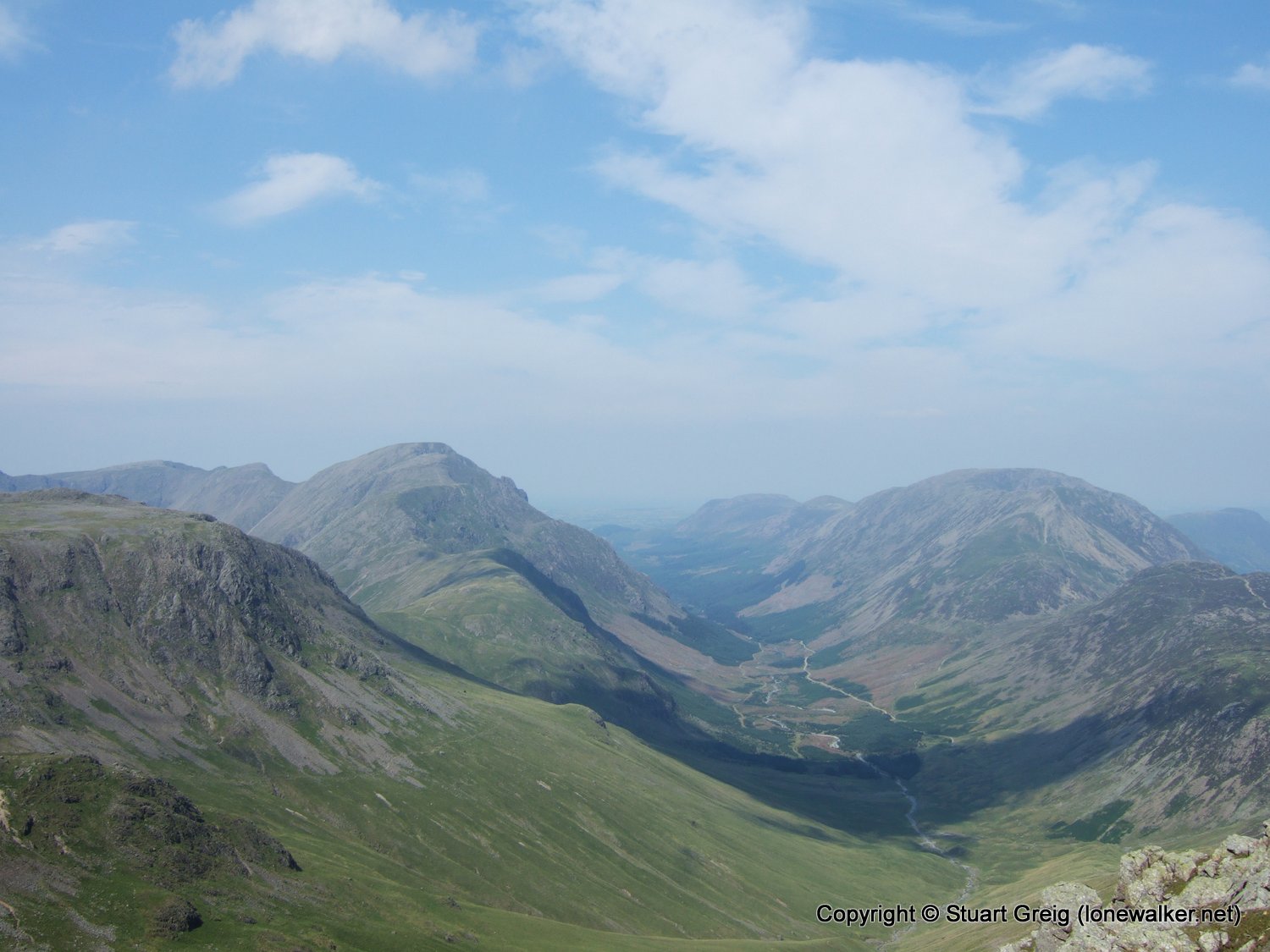 We stopped for a few minutes on the summit of Green Gable, mainly to gawp at the huge lump of rock ahead of us, but also to admire the views down Ennerdale. The wind was quite strong on the summit, a welcome relief from the heat of the day, fast approaching noon.

At Windy Gap I stopped to take a wind reading – just how windy is Windy Gap? Well it’s not that windy at all really. The max wind speed was only 22 mph, less that the summit of Snowdon last week by about 10 mph. Wind speed is deceptive though. It never seems to be blowing as strong as you think it is. Stick your head out of the car window at 40 mph and ask yourself if you’ve ever walked in wind that fast before? 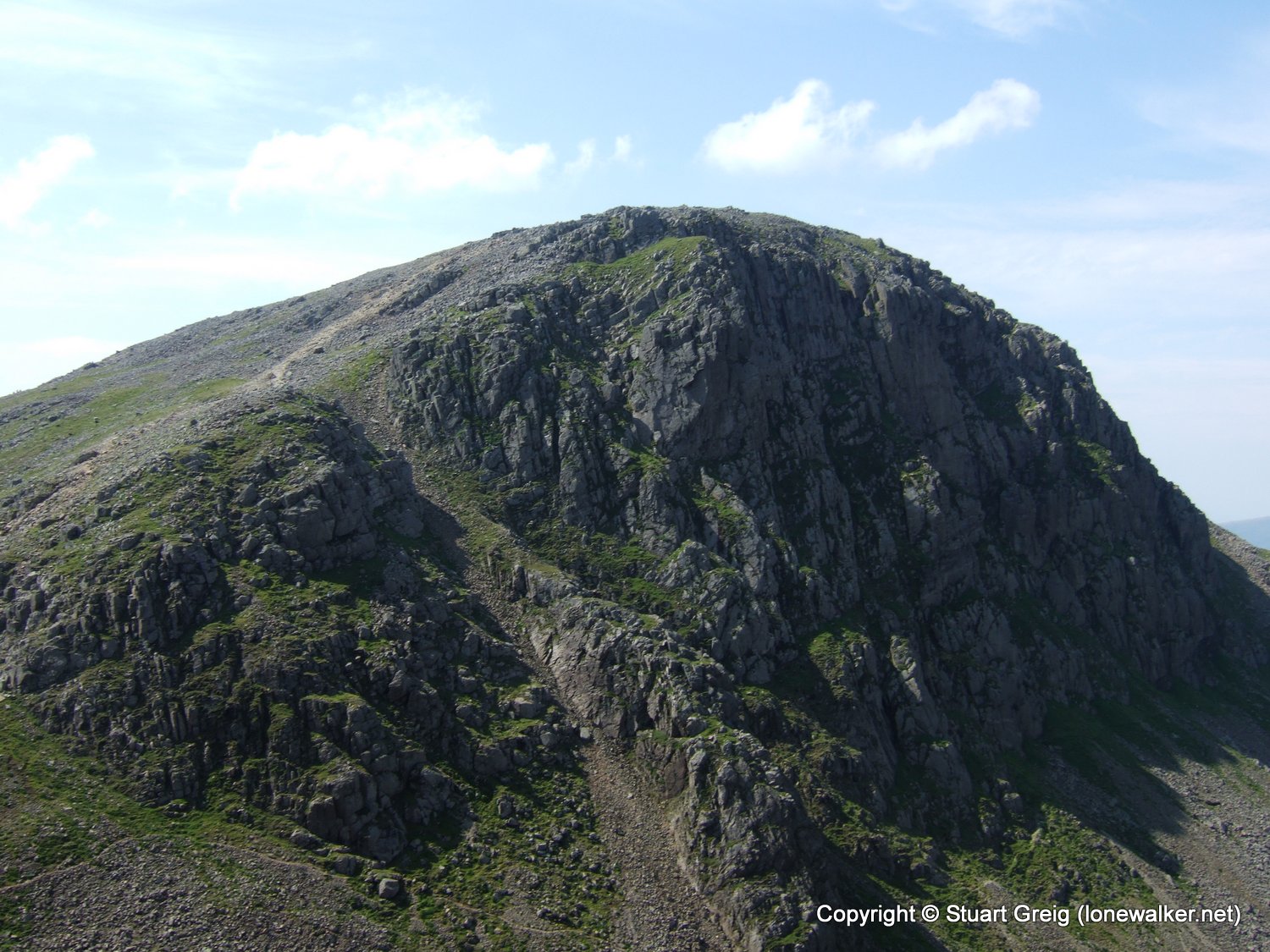 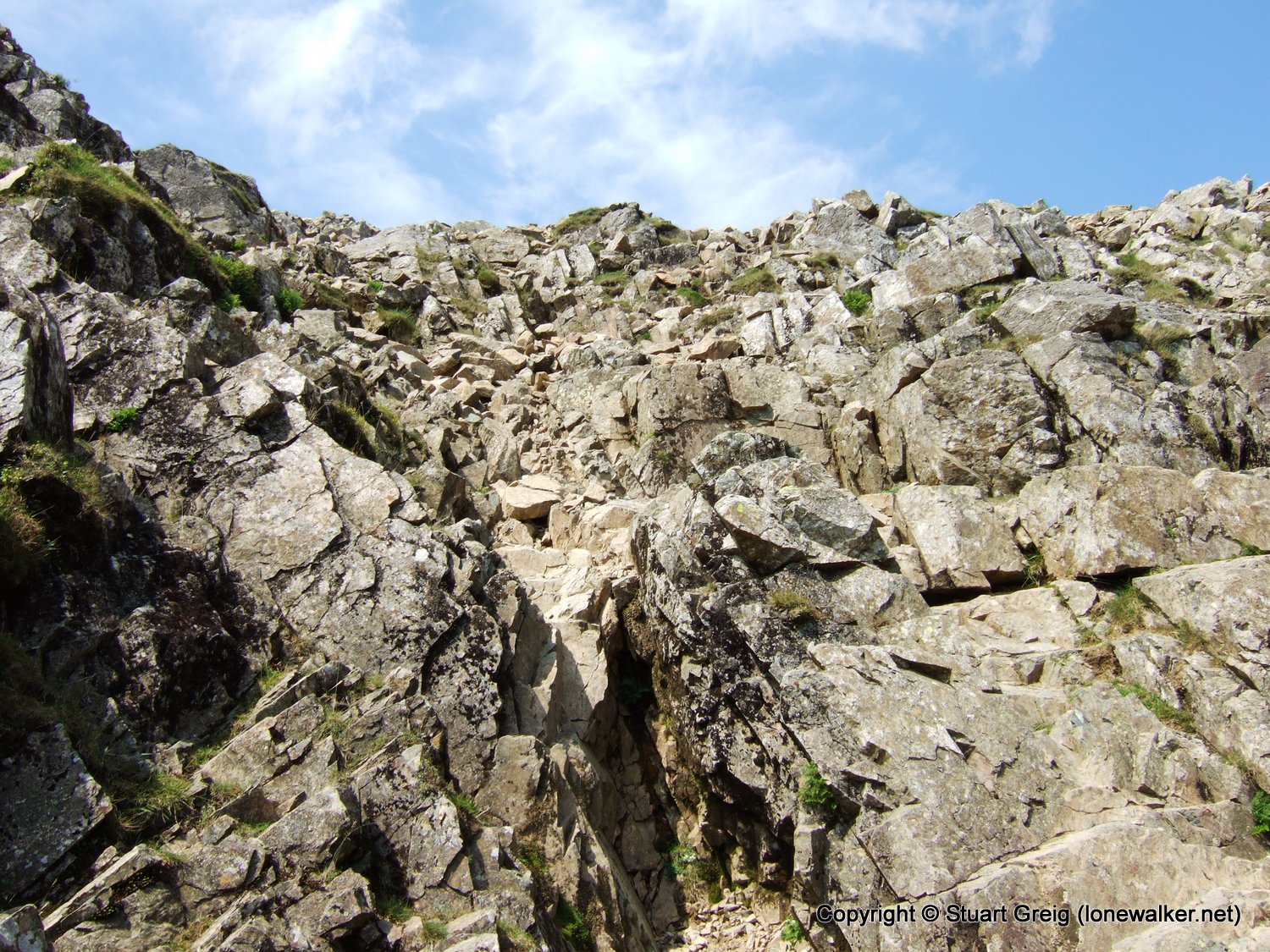 Yes, there really is a path up here, on approach to Great Gable

We lost the path on the way up for a few minutes and were rewarded with a steep scramble up the face of the mountain. A couple stood below and watched us before deciding that we were all going in the right direction and joined us on the scramble. The path was about 10 yards to the right of us, zig-zagging up this steep section of rock. 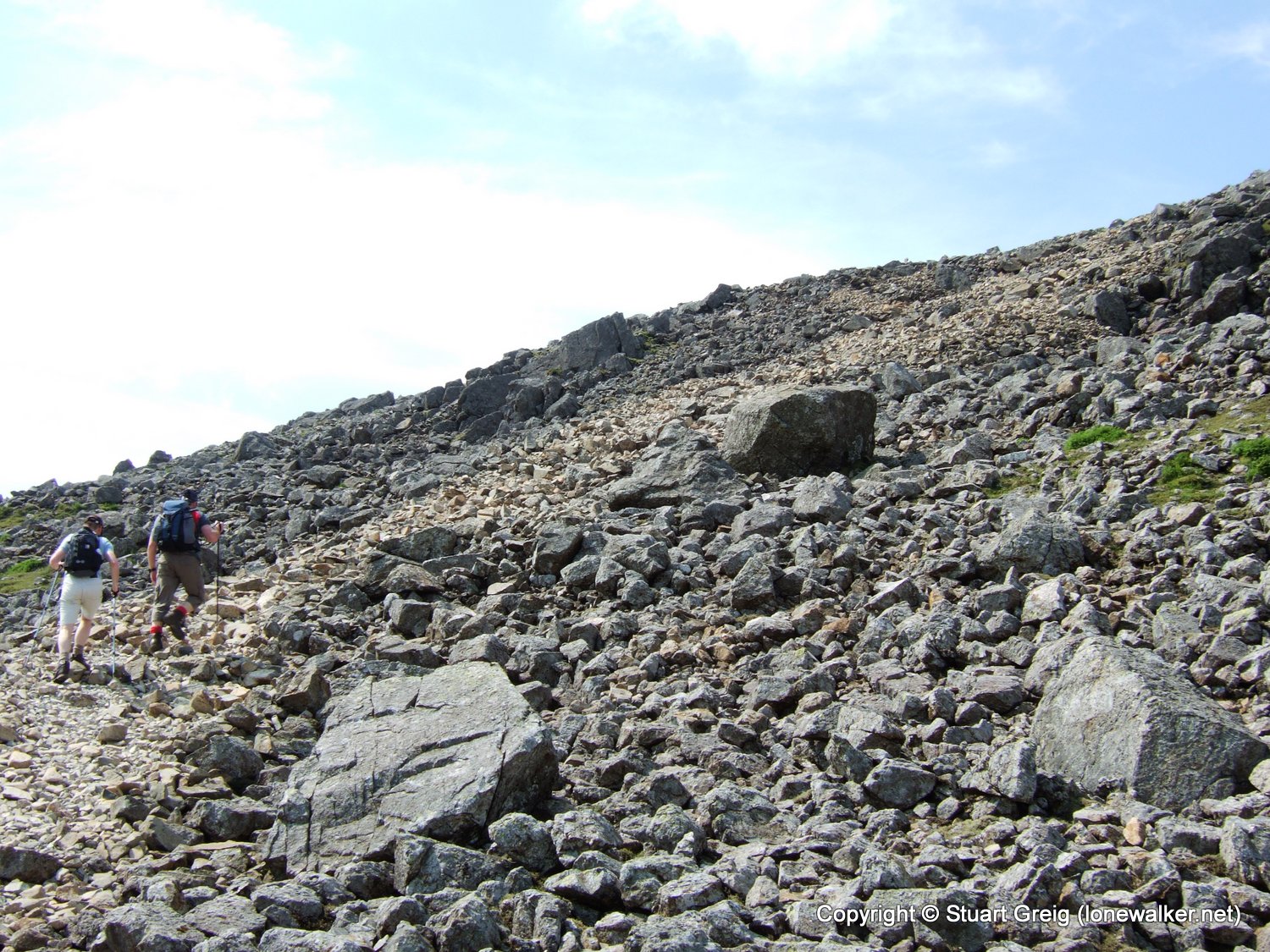 The path up Great Gable 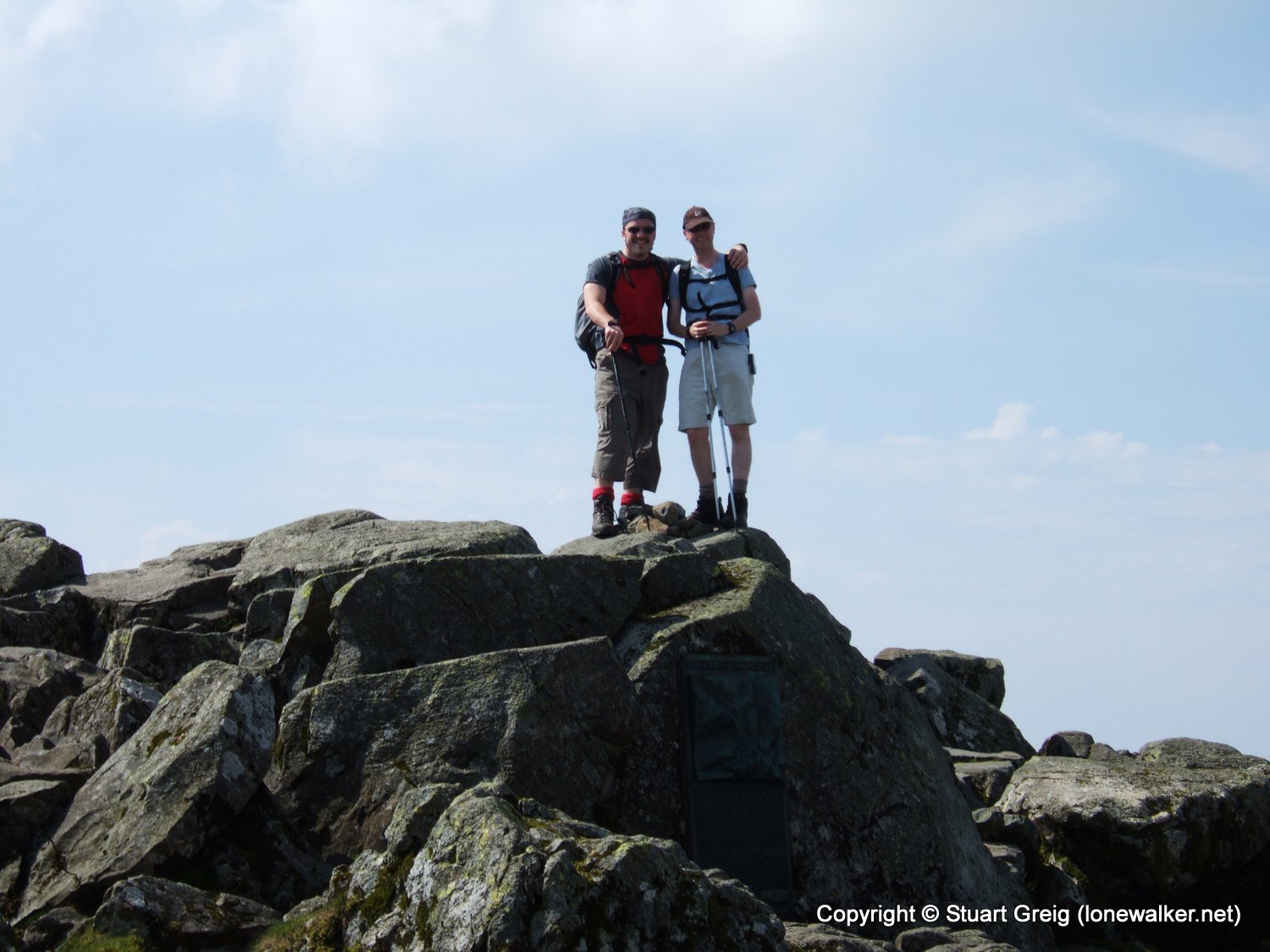 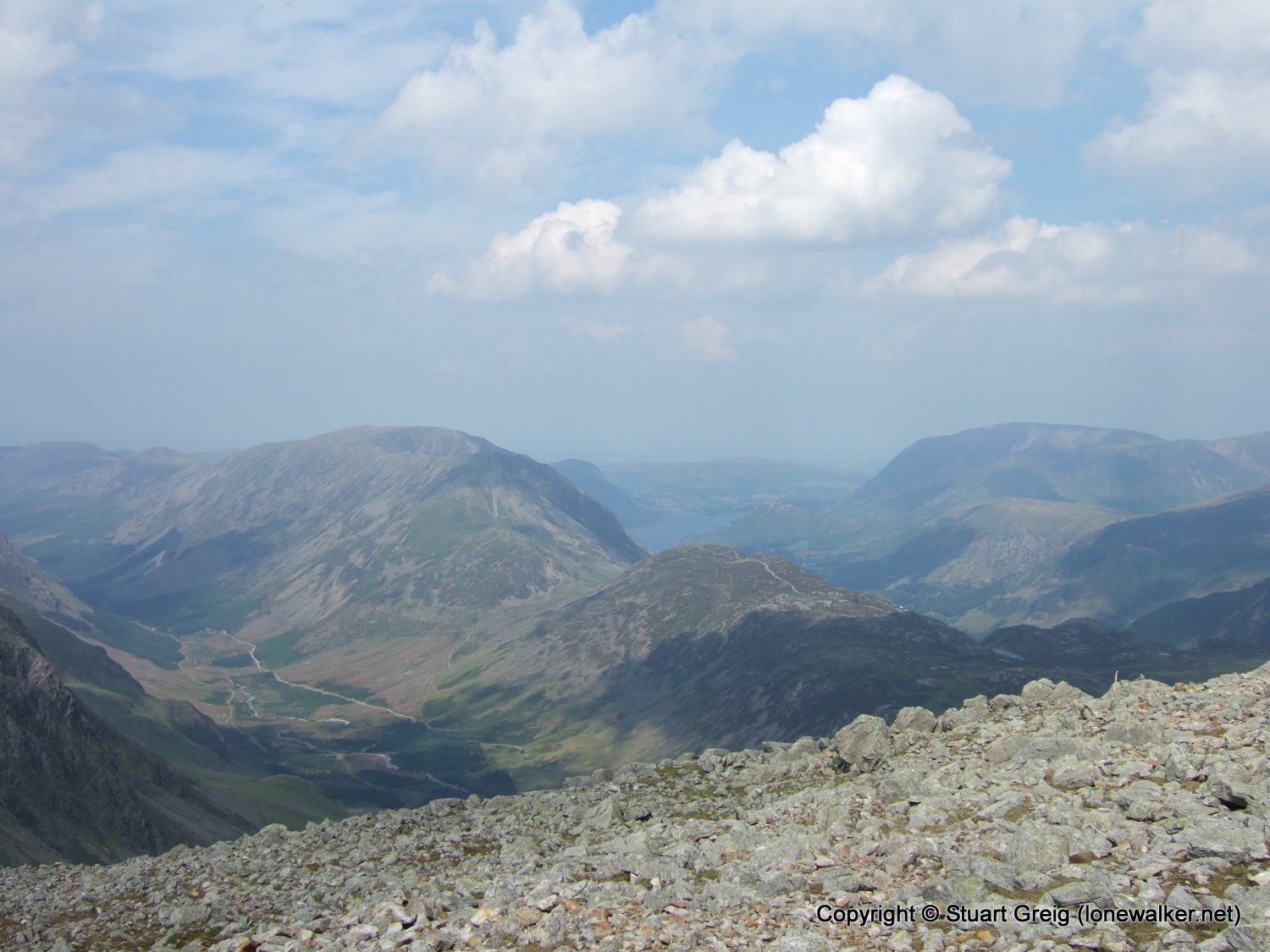 The views from the summit of Great Gable are incredible. Apart from to the South East, where the view is hampered by the Scafell range, the views to all other directions are almost limitless. Uncounted tops, valleys and tarns are visible from this view point. 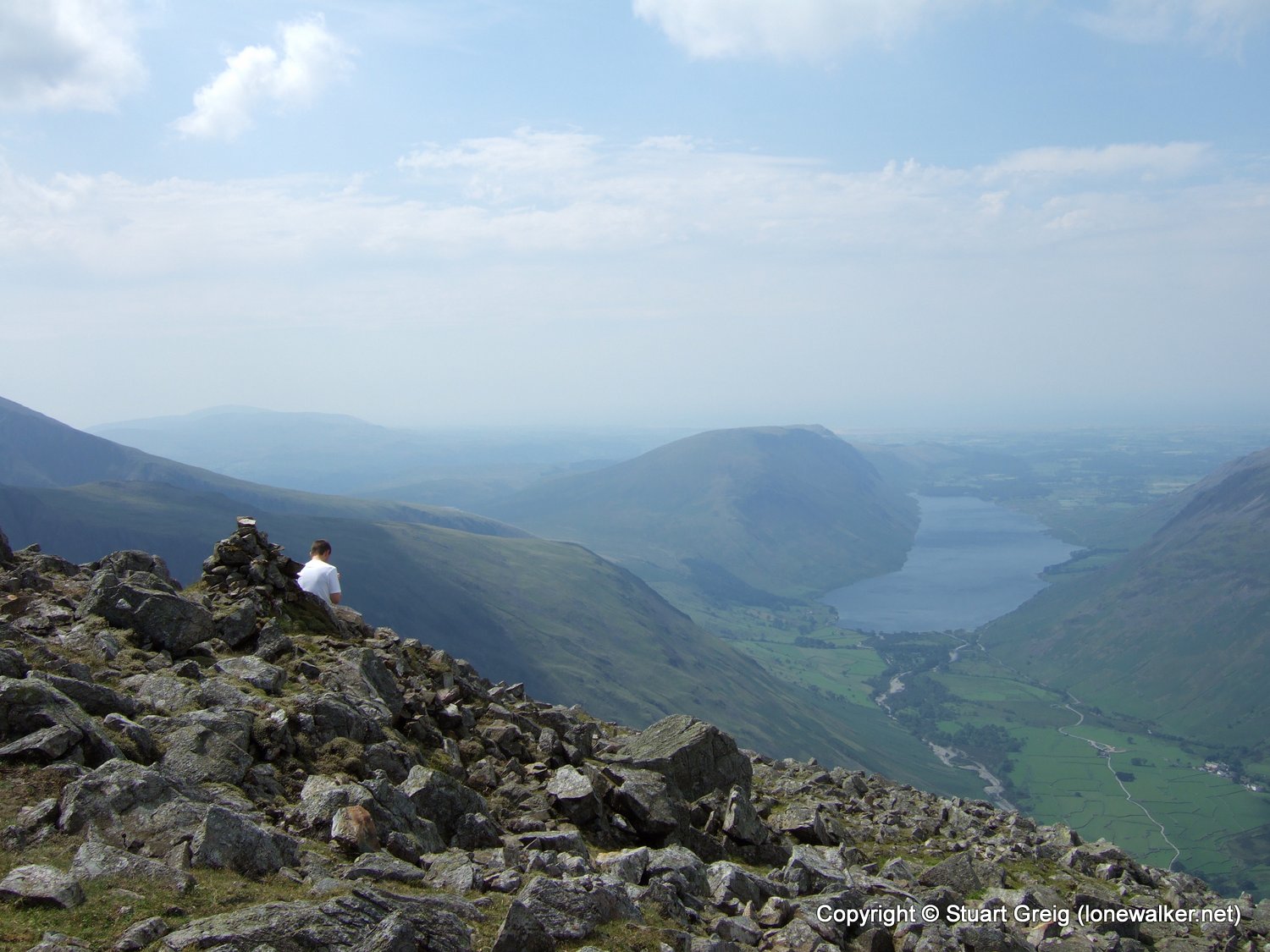 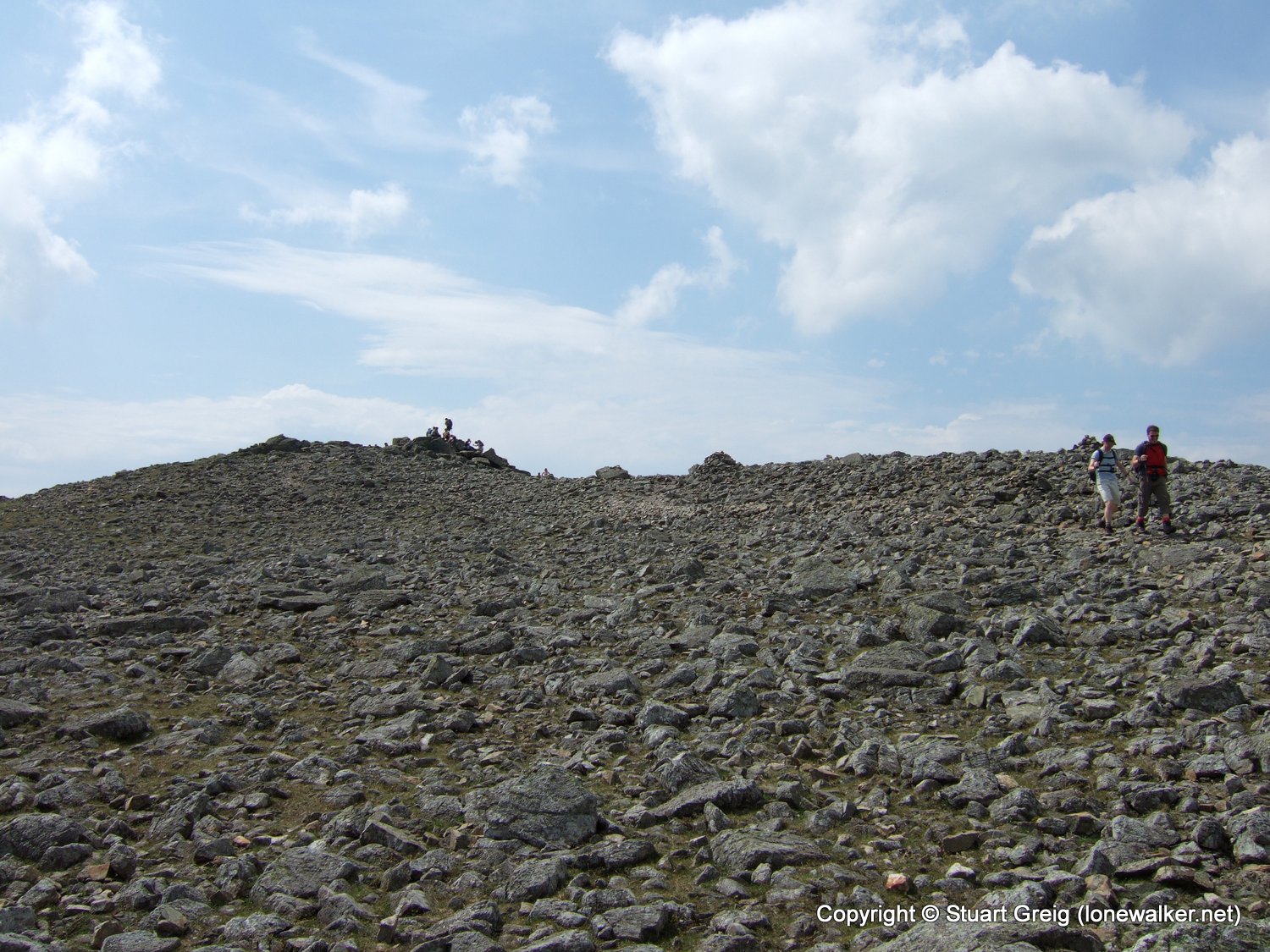 Leaving the crowds on the summit of Great Gable

We arrived at the summit about 11:50, just in time for lunch, but also just ahead of the many dozens of walkers who had chosen to have lunch on the summit. It was soon very noisy of the top and prime picnic seating was becoming scarce. We packed up and headed back the way we had come, down the path this time over the rocky section and back to Windy Gap. 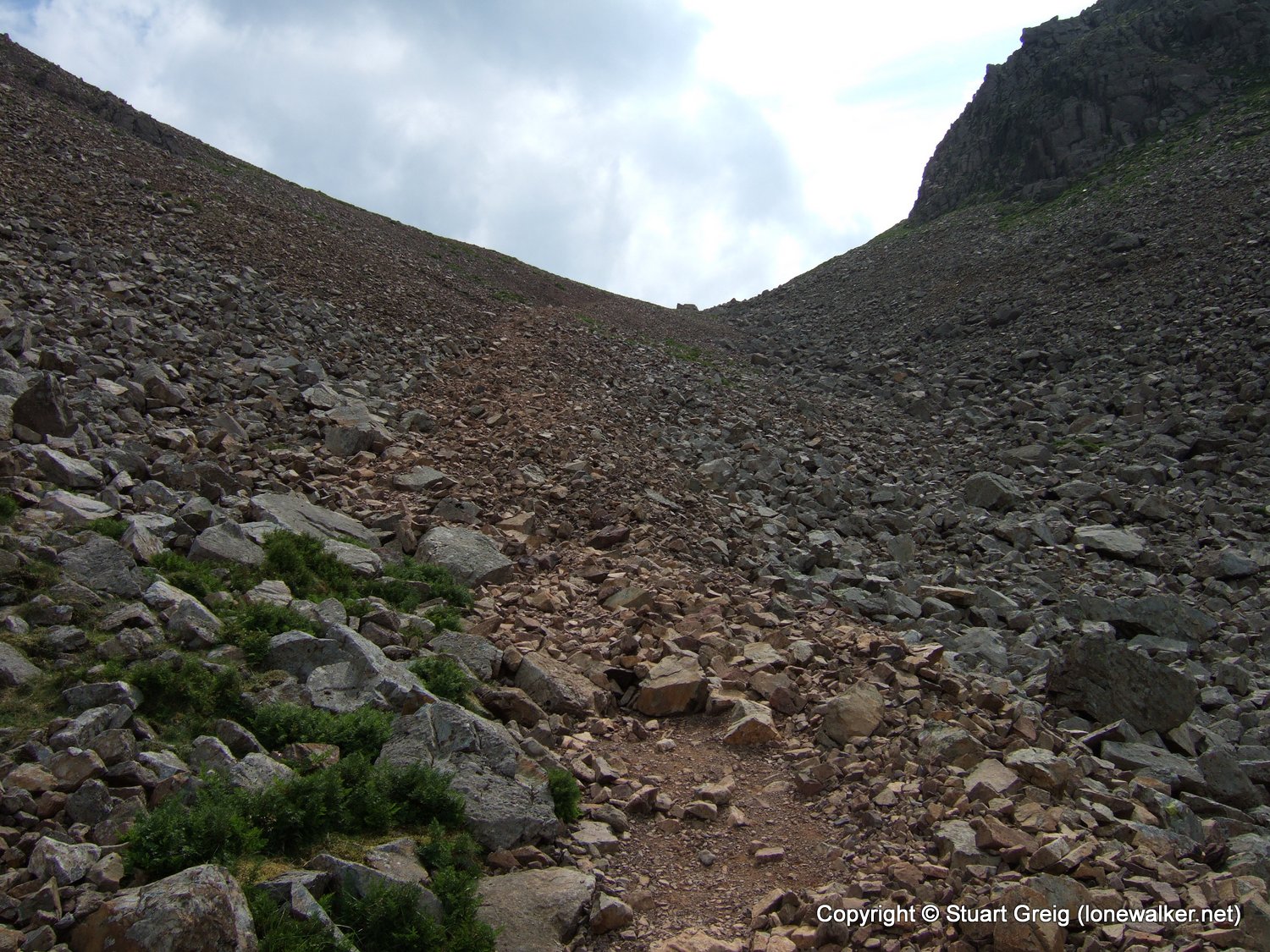 The scree path down Windy Gap

The path down Windy Gap was very tricky, we all slid and slipped several times over the scree on the path, sending little rivers of stones ahead of us. 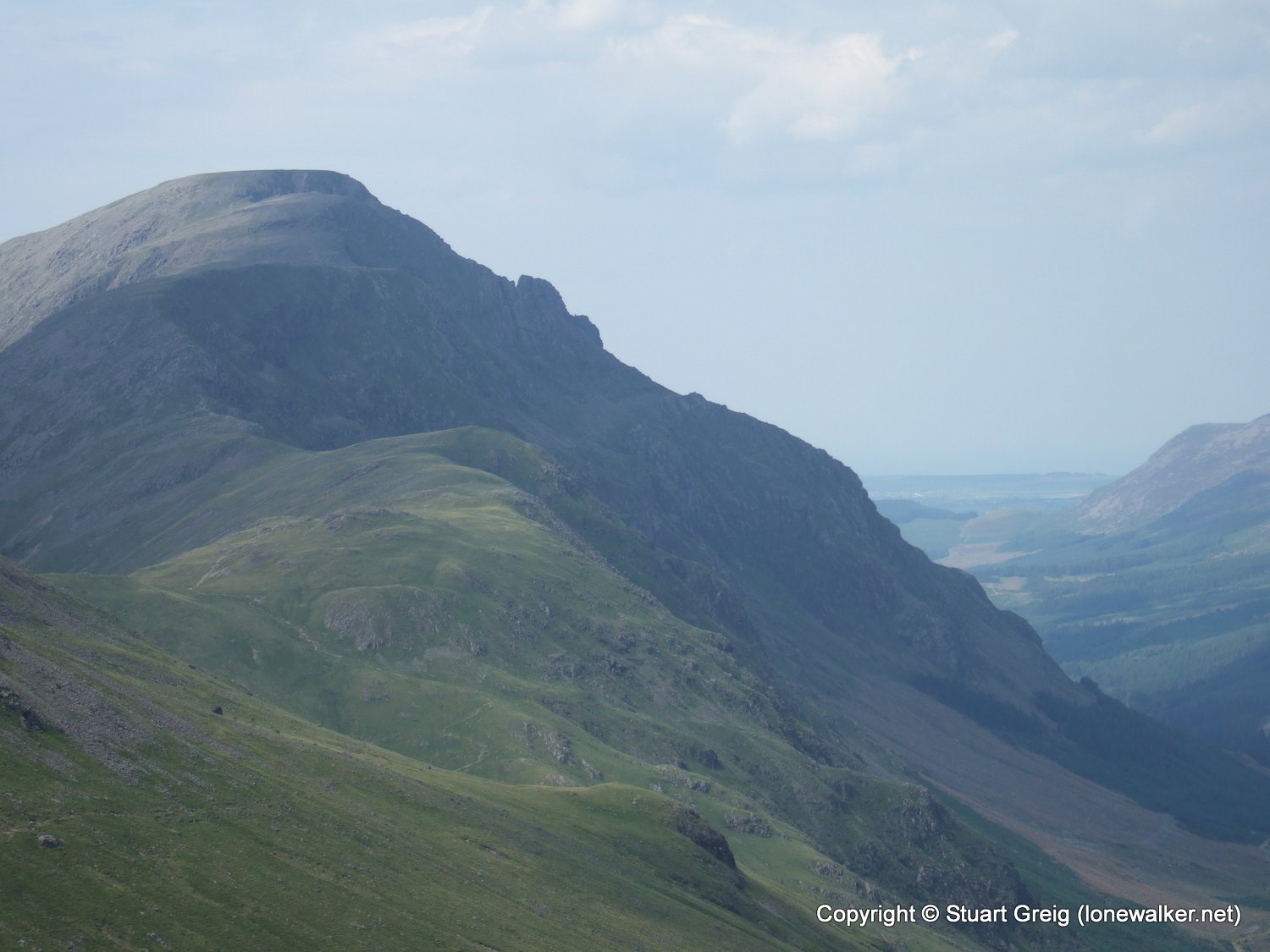 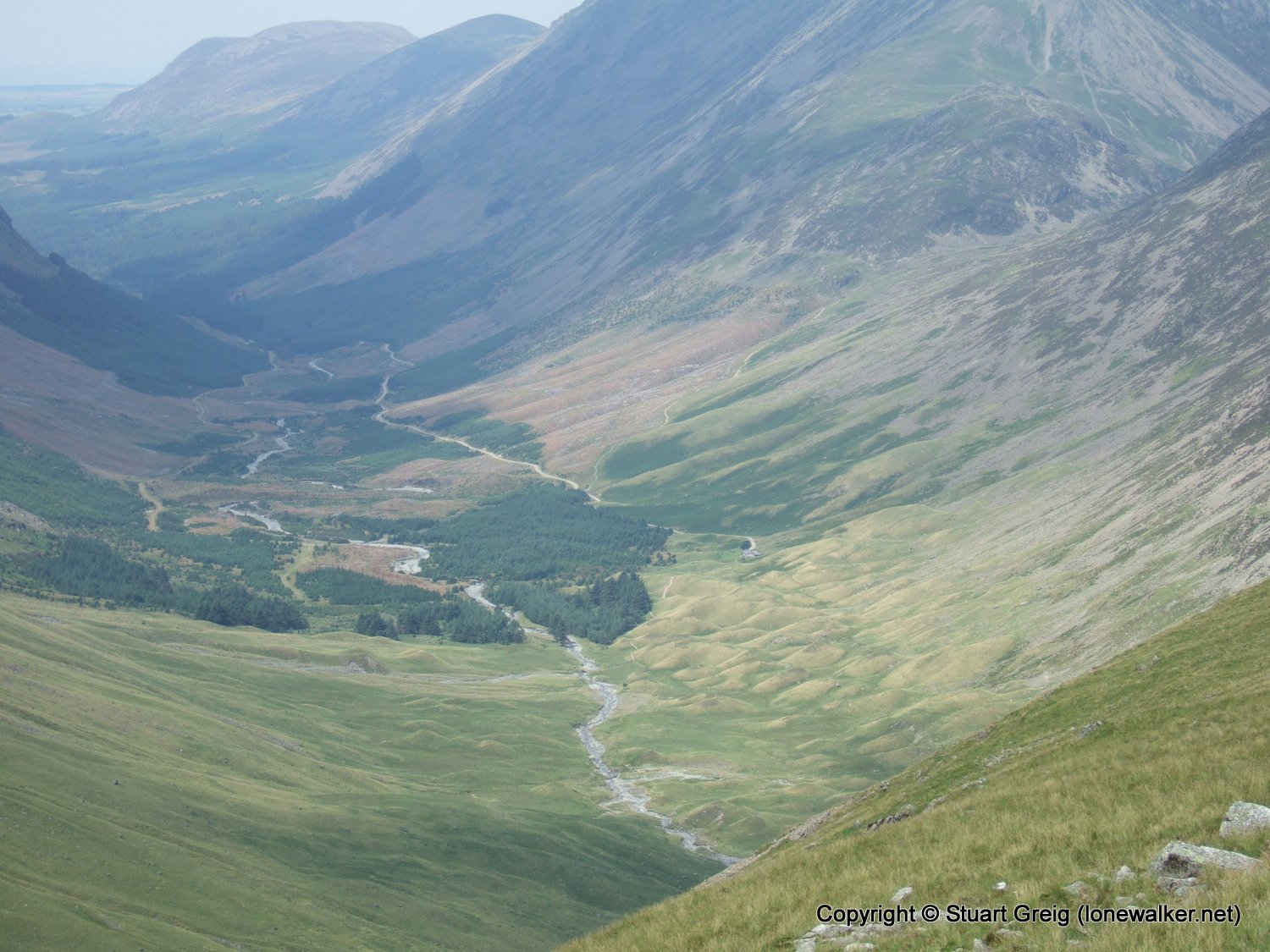 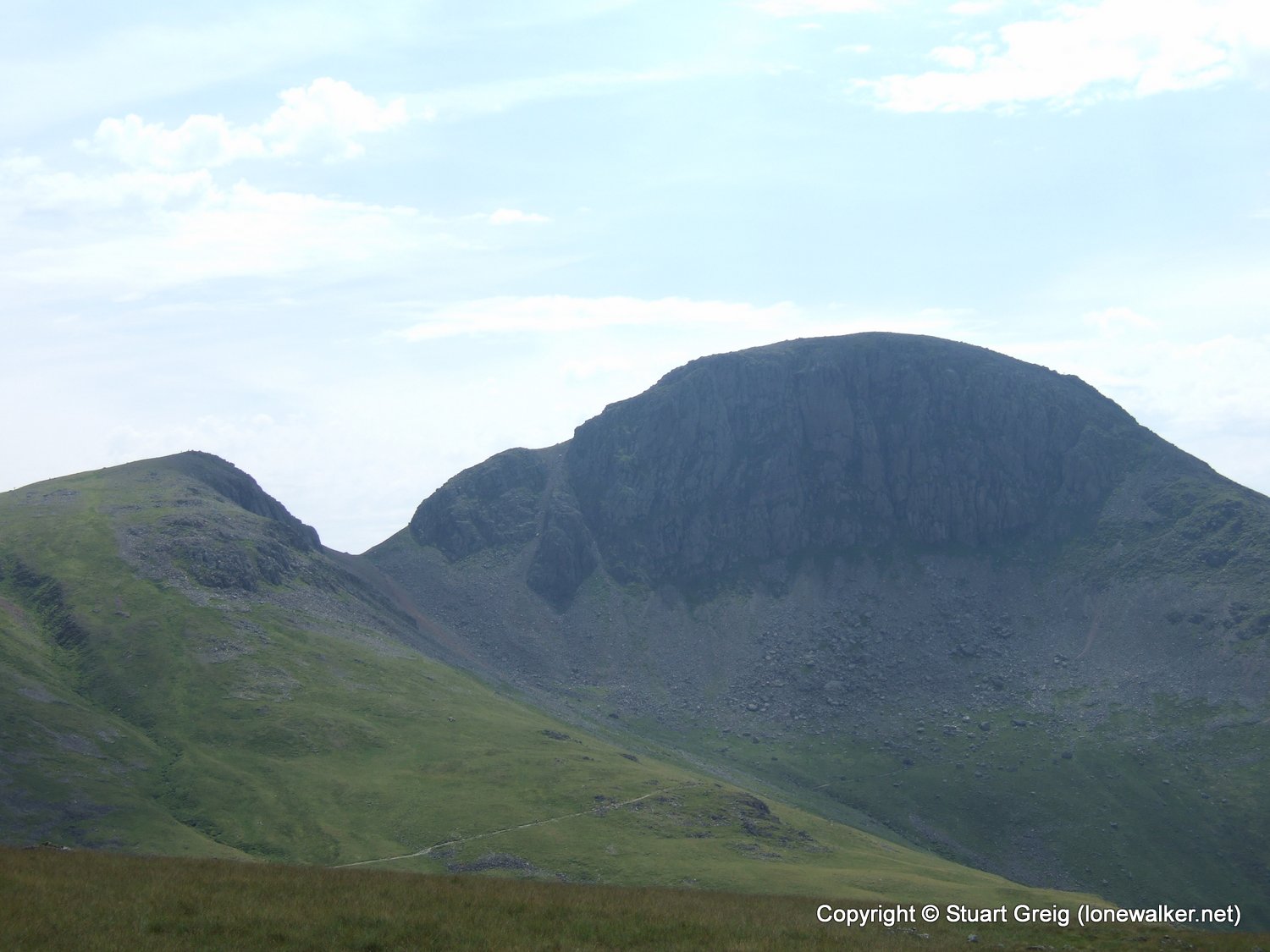 We paused for a while at our decision point. Here we could extend across the top of Loft Beck to take in Haystacks and then Fleetwith Pike, or we could call it a day and head back to the car, using the Coast to Coast path. We were all feeling a little done in, probably because of the sapping heat and also the lackof a walk-in to get the muscles loosened up at the start of the walk, the time was also against us extending the walk, so we agreed to head back to the car. We could at least continue to take it easy with this decision and we enjoyed the footpath and the bird along the way. Mark introduced Tex to the Wheatear, one of which finally stood it’s ground long enough for Tex to spot one, before flitting off along the path ahead of us. We didn’t see a small flock of Twites; an unremarkable brown bird about the size of a sparrow, but with a slightly longer tail 🙂 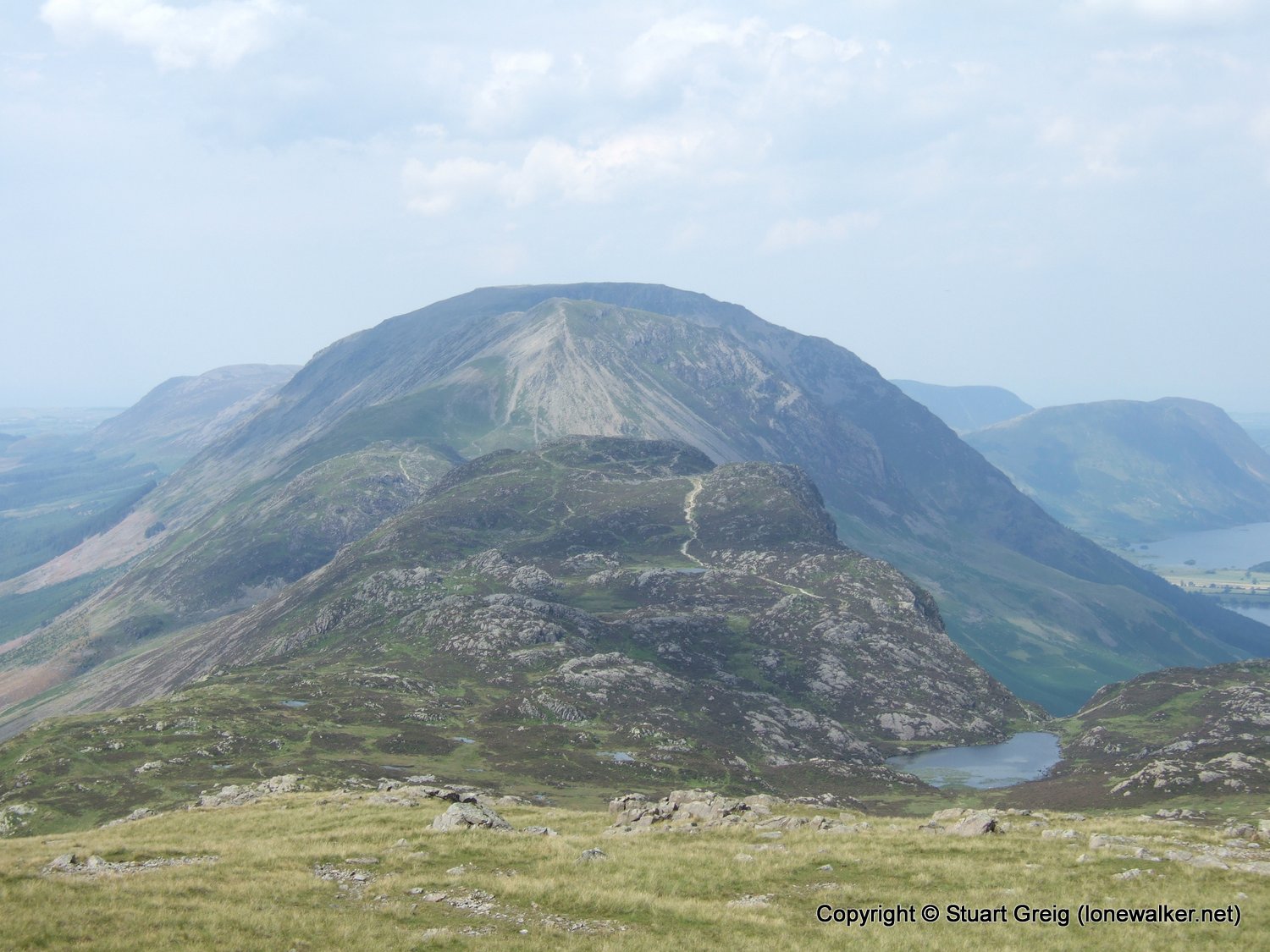 Haystacks and High Stile, with Blackbeck Tarn in bottom right 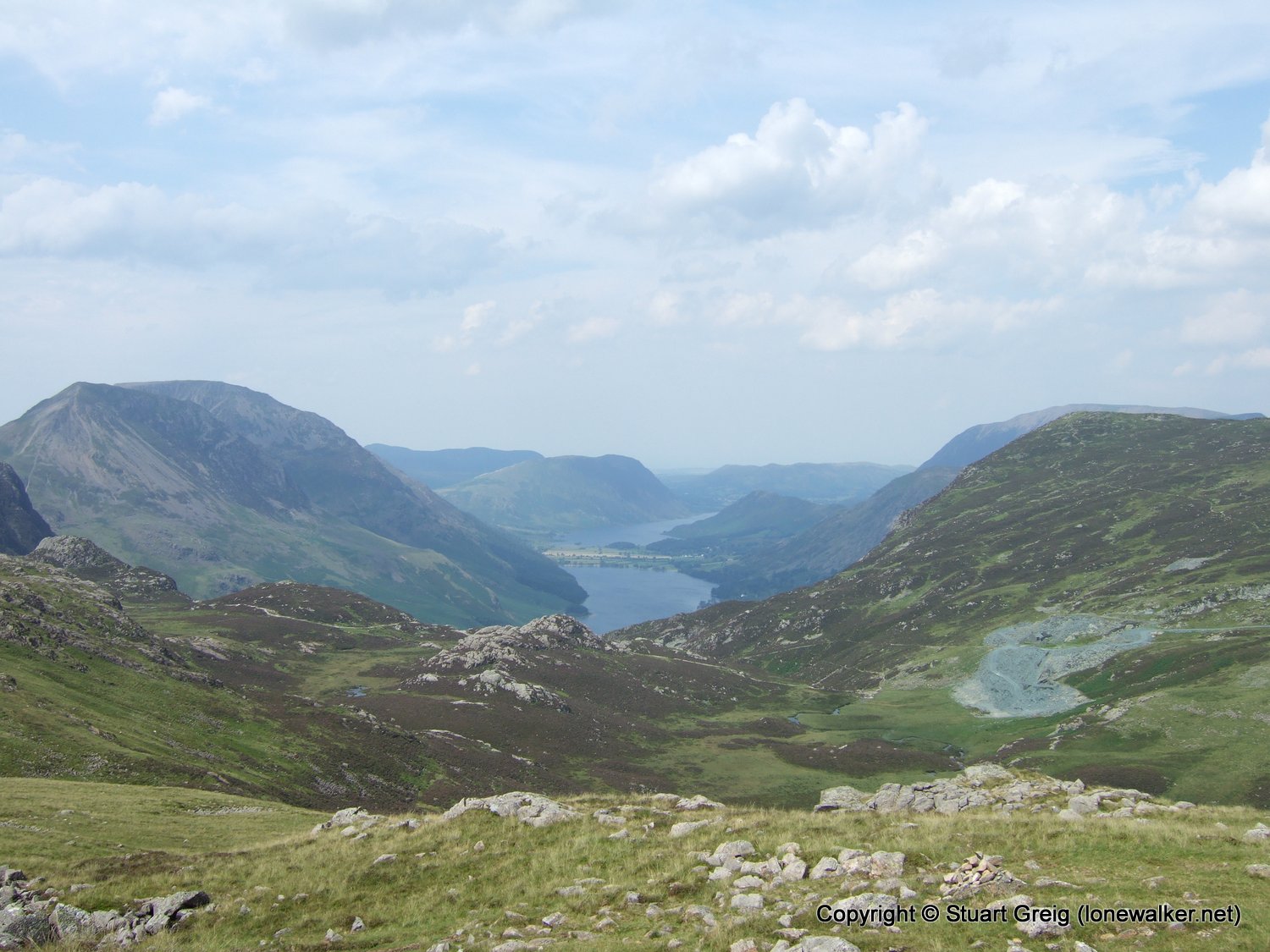 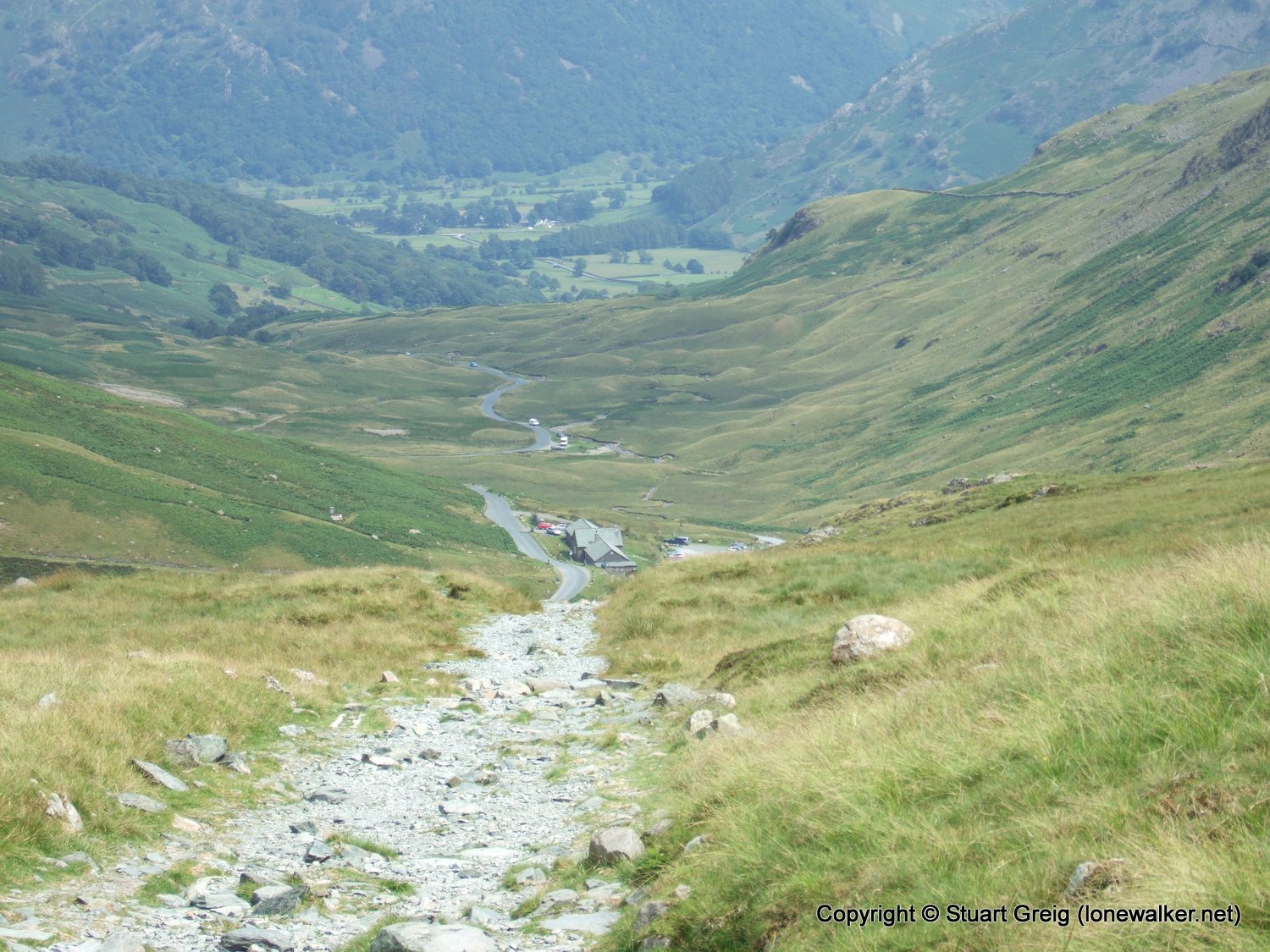 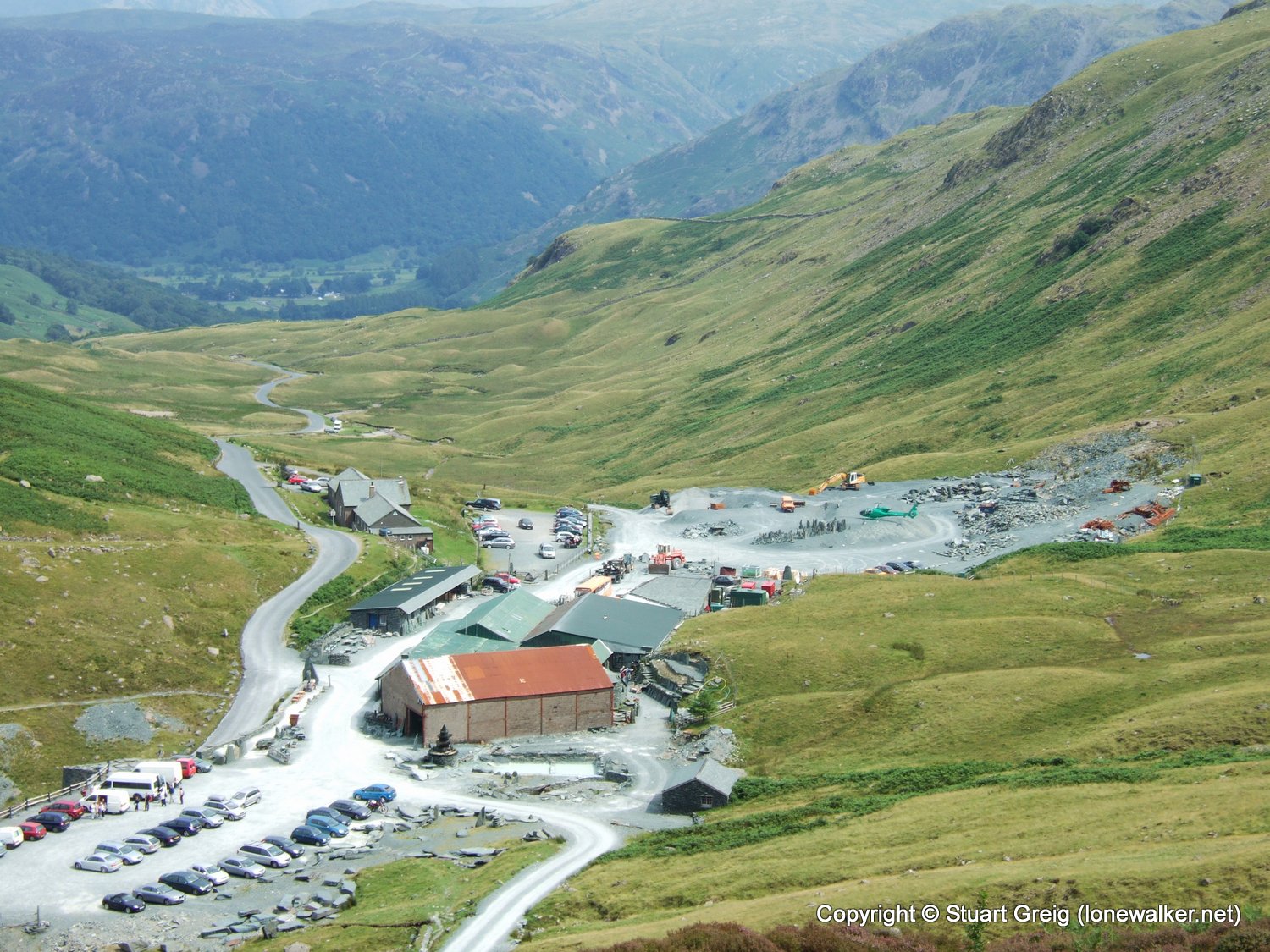 Honister Slate Mine from the Tramway

The green helicopter wasn’t there when we set out! It doesn’t seem to matter what age you are, according to Tex, helicopters are always cool things to see! I can’t disagree with him.

Although we’d only done just under 6 miles and about 2400 feet of ascent, we all felt like we’d done a walk today. This was the hottest day of the year so far for me and I have a nice rosy face and red arms to prove it. The wind stopped you from feeling like you were being burnt, but as I can get sunburnt in the shade (this did actually happen to me), then it was no surprise to find I looked like a lobster!

Some silliness on the Tramway, singing our favourite walking song.