Download file for GPS
As usual the forecast for today was pretty bleak for the northern hills, so I decided to revisit a hill I’ve not seen for a few years and take a better photograph of the trig point. I was also looking forward to another bleak and wild day in the hills of Yorkshire and I wasn’t disappointed.

Google Earth told me I could expect to find at least a couple of parking places in Hardraw, just beside the road in a lay-by at the edge of the village and I arrived in time to secure one of these which gave me much better access to the route than if I’d have had to park in Hawes, which is the alternative. The lay-by is right next to the Pennine Way as it leaves the tiny village of Hardraw and heads off into the hills.

It wasn’t raining as I left the car and it seemed as if the weather guessers could have been wrong, the sky was clearing to the south and the sun was shining through ragged gaps in the clouds. Unfortunately the pictures that I took with my new camera, before the rain did start and I swapped to my old camera, have inadvertently been deleted – Bollocks! I don’t have a proper system in place yet for getting the pictures from the camera to the PC and then backing them up. Needless to say I will have by the end of today. There were only a few pictures of the path and a shot of the sun through the clouds and if I had to lose a day’s pictures to learn this lesson, then today was the day to do it.

40 minutes into the walk and the rain started. The clouds finally won their battle over the sun and they closed ranks, called on reinforcements and overran the hill. Initially the rain wasn’t too bad and I stopped for a couple of minutes to get my coat on and swap cameras – the new Panasonic going into the waterproof stuff sack I had just taken the Fuji compact out of.

Within 15 minutes though the wind started to gather strength and the rain fell harder, so I stopped again and dragged on my waterproof trousers as well. I donned gloves and hat to keep the wind at bay and carried on up the hill towards the cloud and the summit. 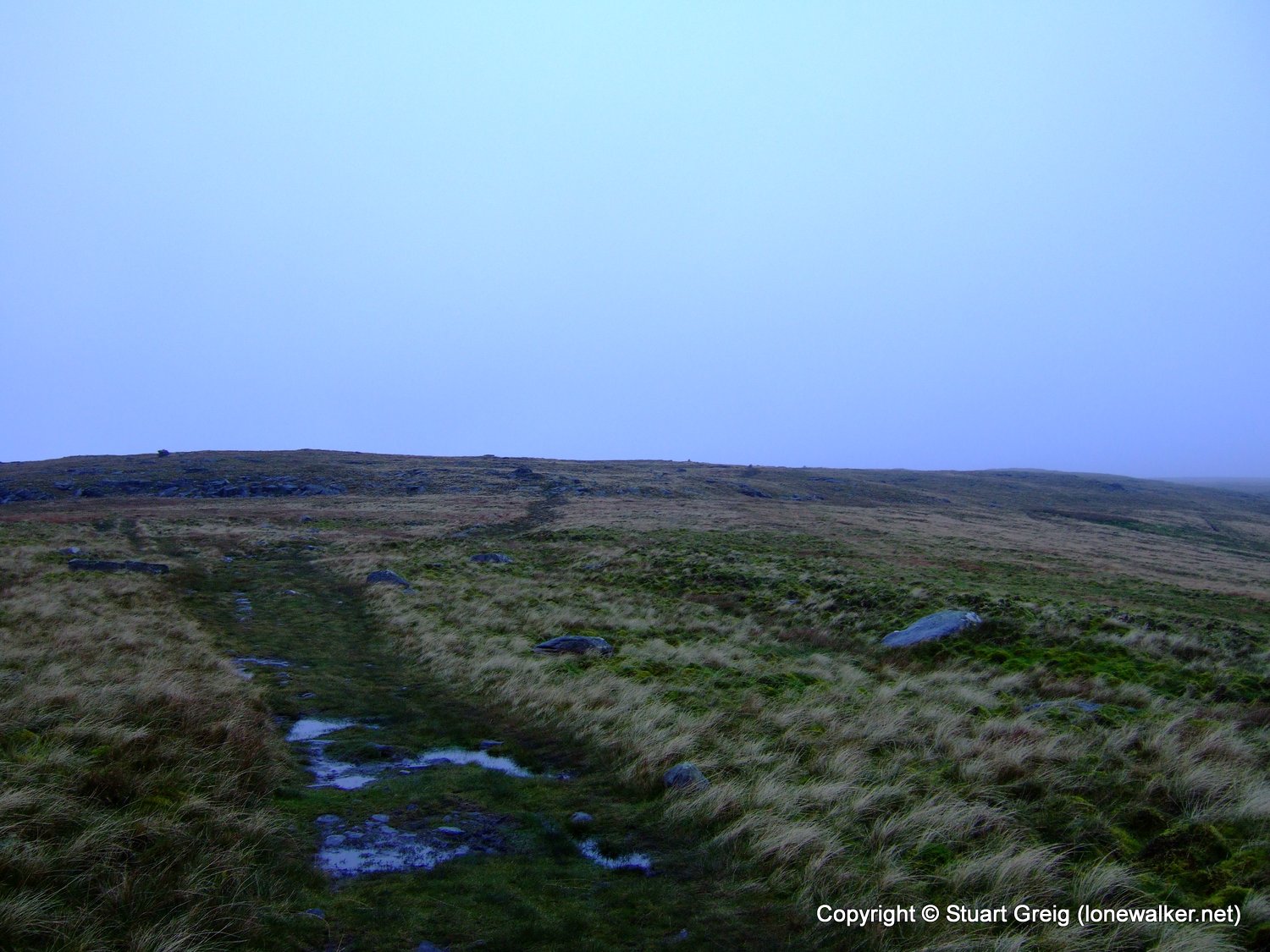 The rather wet path up the flanks of Great Shunner Fell, following the Pennine Way

In many places the path is paved and these flagstones are very welcome, but in many places you are still left to find your way across the boggy ground as best you can. The savage easterly wind was blowing the rain horizontally across the hill and although it wasn’t anything like as bad as on The Calf a couple of weeks ago, it still made walking difficult and noisy as the rain battered against my hood.

This time last year I would probably have given up at some point on the path and decided to head back to the car, but something has come over me more recently and I’m now happy to be out in all conditions, I’m even happy to start in conditions that normally I would shudder at. My only concession is that I don’t see the point in walking somewhere I would normally go for panoramic views, like the Lake District, when I know I’m only going to see the inside of a cloud. Parts of the Yorkshire Dales, the Howgills and the Peak District offer some great walking, at what I would normally consider quite low levels and I don’t mind so much walking through the clag in these areas. 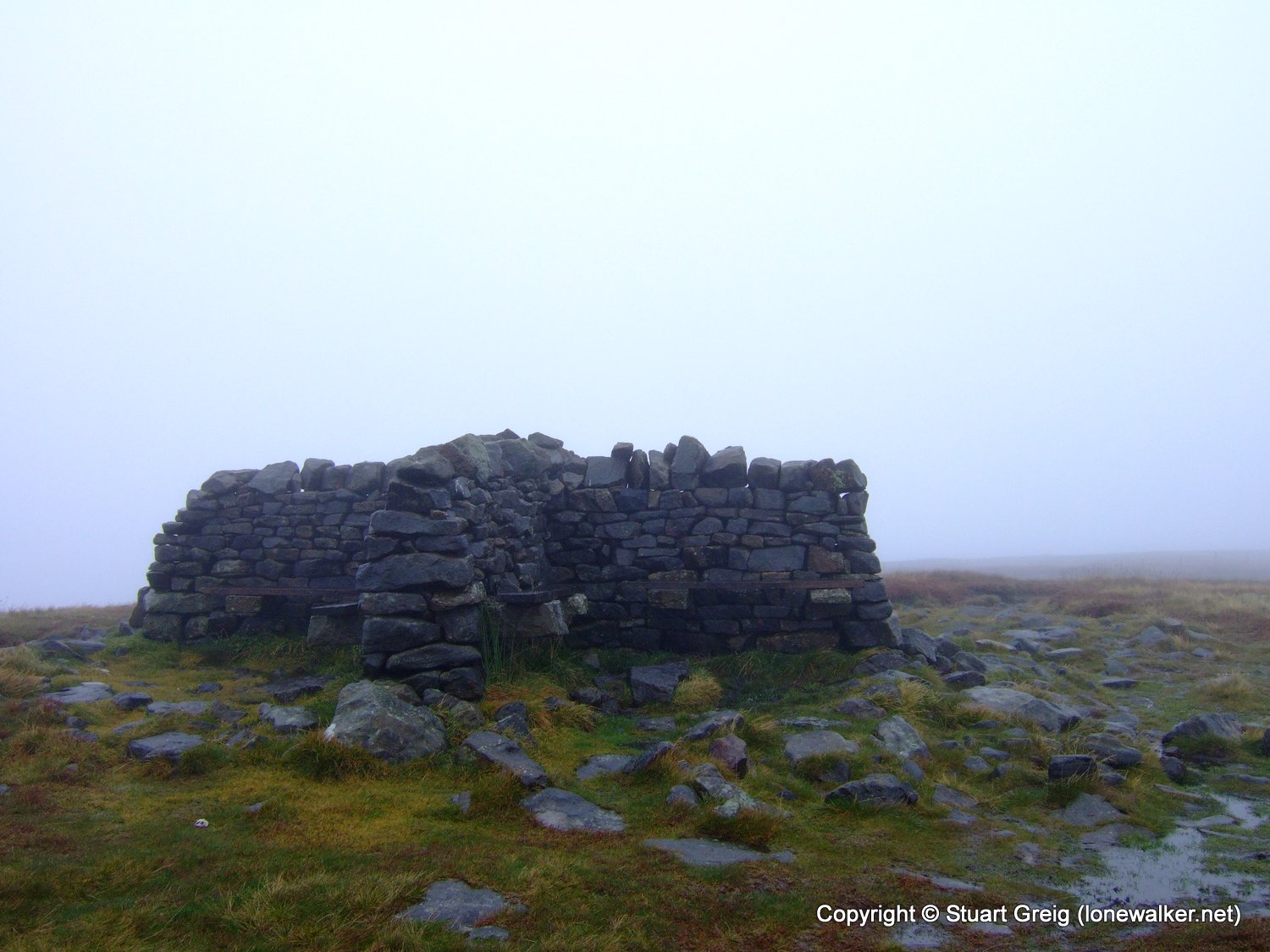 I reached the summit a little before 10:00 and I’d seen not a soul all morning, other than a dog walker leaving the village a minute behind me, but they’d not taken the path up to the hills. I have expected to find someone in the cross shelter, but like the rest of the hill, it was empty. I’d visited this summit in September 2005, while walking the Herriot Way and that was before the days I “bagged” trig points. This meant that although I’d visited the trig and even accidentally taken a photo of it, I didn’t have a proper picture of it for my catalog.

The wind had been blowing in the same direction three years ago, because I needed to seek shelter in the same quarter of the cross today. 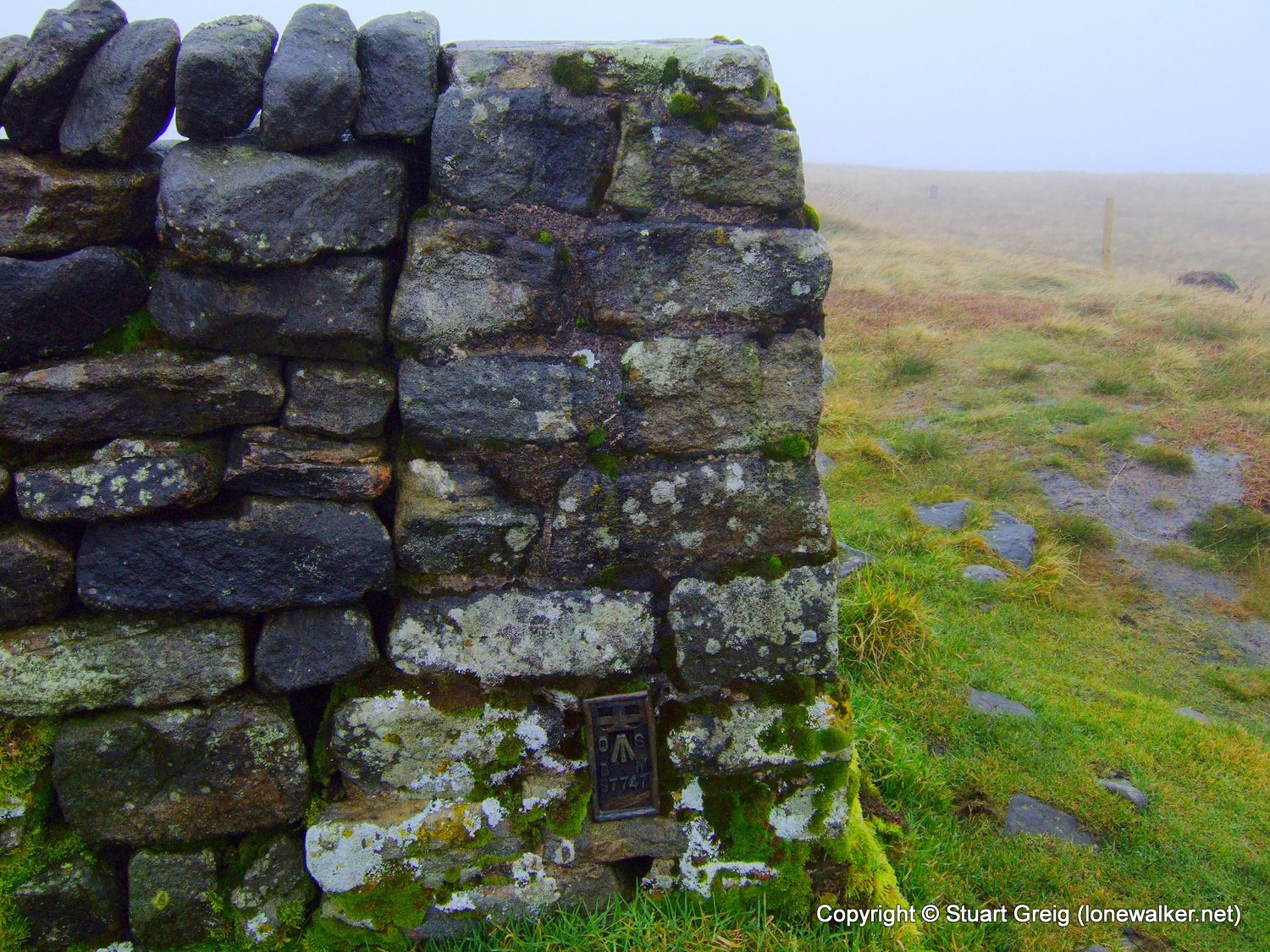 The summit trig point on Great Shunner Fell, built into the cross shelter 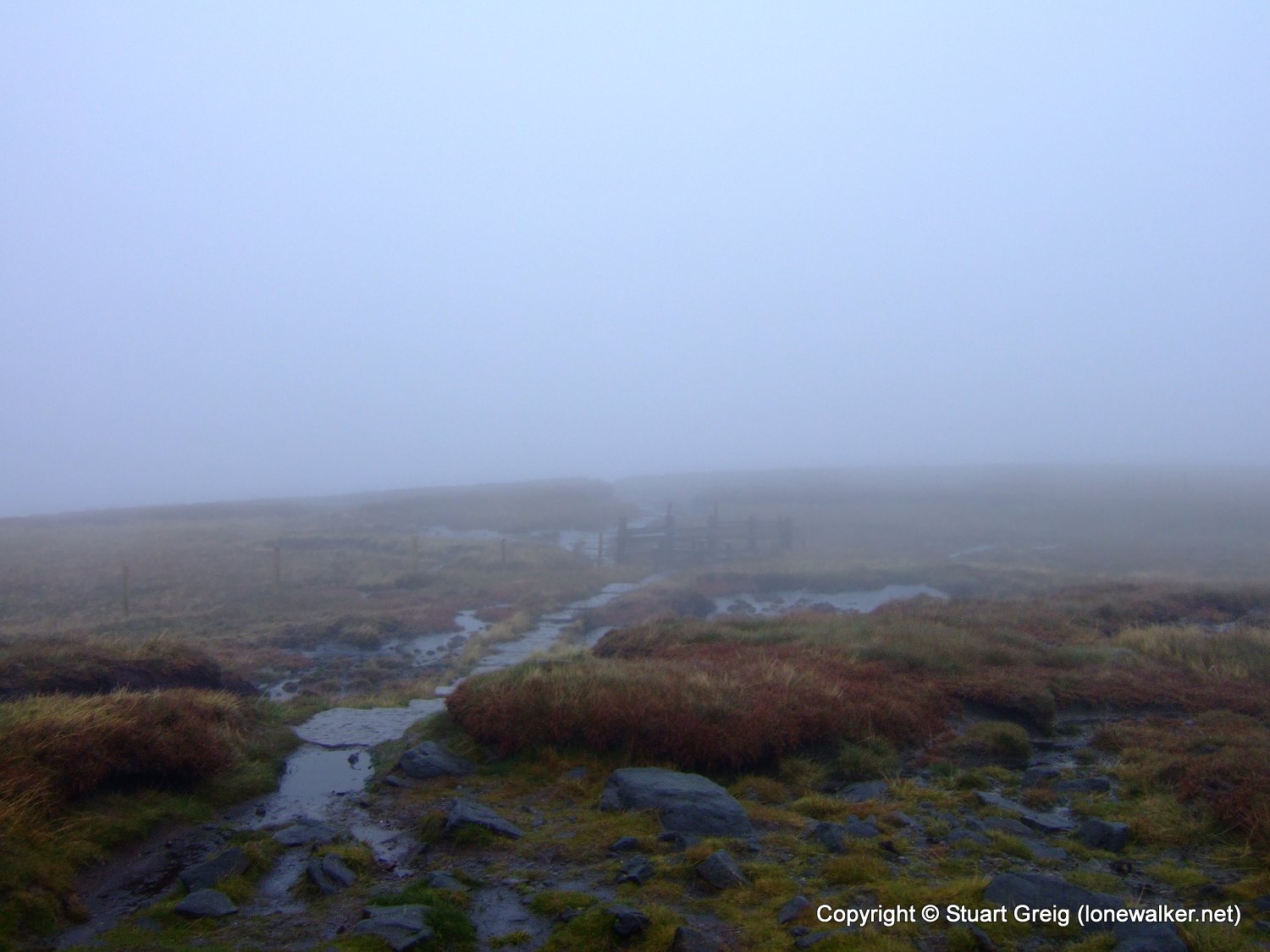 The picture above is remarkably similar to one I took three years ago – I suppose the sun does shine up here sometimes. 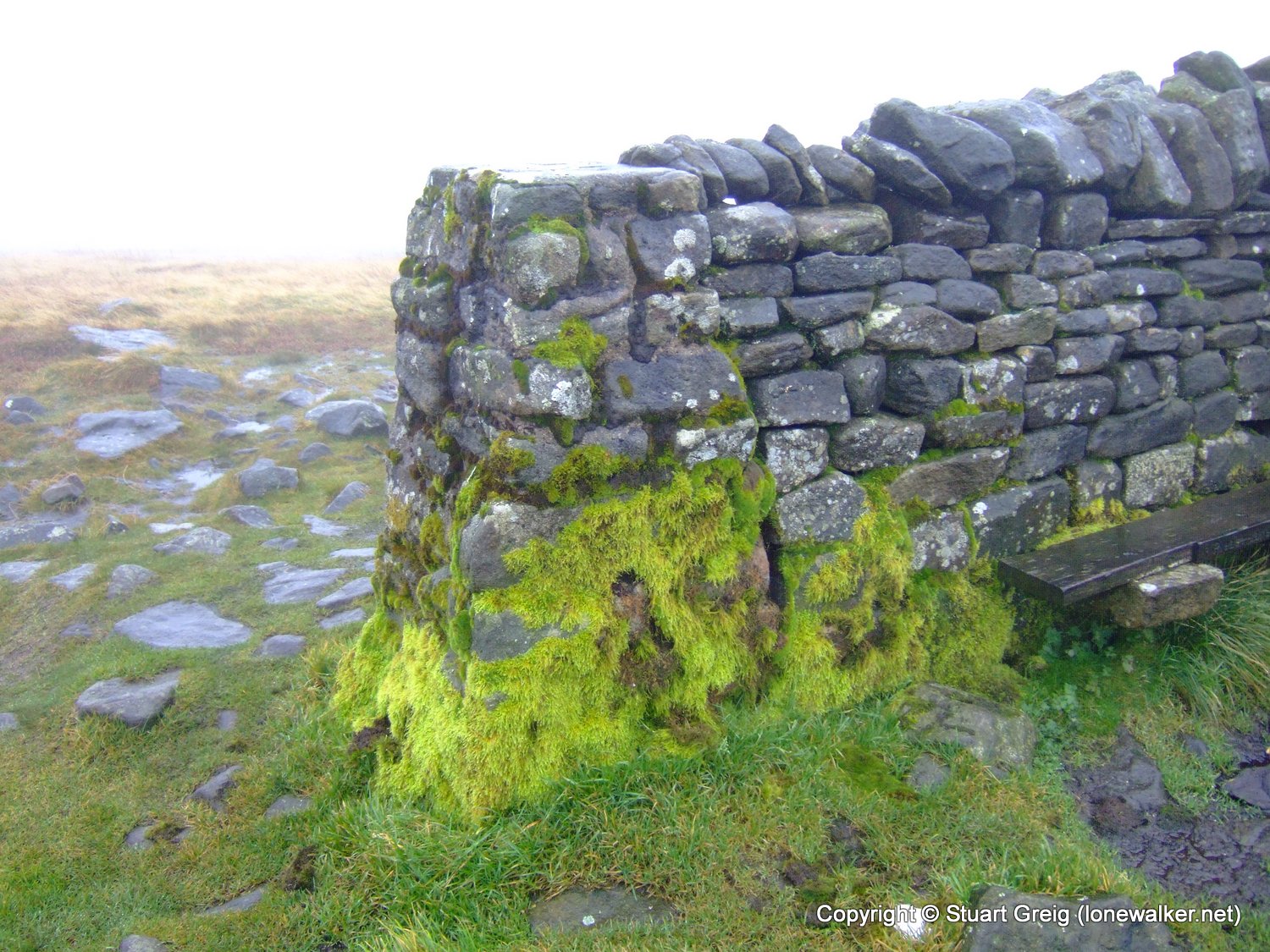 The trig point on Great Shunner Fell, from the other side

My route today had been one I’d selected from go4awalk.com a few months ago and it spoke of a narrow track leading south east from the summit across what I had remembered as being a peat hag. The OS map didn’t inspire confidence in this track either – not least because it wasn’t shown, but also because of the occasional “green eyelashes” and the number of streams crossing the area – I also didn’t fancy crossing Grimy Gutter.

Once on the summit though the path was faintly visible leading off into the cloud, so I struck out, on the basis that it was only a mile and half to the road and how bad could it actually be? In the mist the path was very difficult to follow and although there are a number of stakes to help guide you, these were not always visible through the mist and I kept stumbling through deep wet boggy patches. Without the GPS this would have been much harder than it was and there is a tricky gulley (Wofell Scar) to beware of. Get the wrong side of this and you will not find the road, not without a very steep descent into the gulley and a similar high, steep scramble out the other side.

The directions from the downloaded walk were clear though and these had been plotted into my GPS, so I found the head of the gulley easy enough and crossed before the gradient got too bad. From there the path completely disappeared (or I lost it) and the final half mile or so was a bog trot. The first sight of the road was very welcome. My plan had been to head up Lovely Seat (another Yorkshire Top), but I was half drowned and getting cold, so I followed the road down towards Hardraw.

There were a few cars using the road and I half expected one of them to take sympathy and offer me a lift down to the village and I’m quite glad none of them did, because I’m pretty sure I would have accepted it. The rain was battering down still and the wind was coming from the other side now, but still as strong. The road walk was fine, I was still enjoying being out and about, but I can’t say I was sorry when I finally came to signs of civilisation. 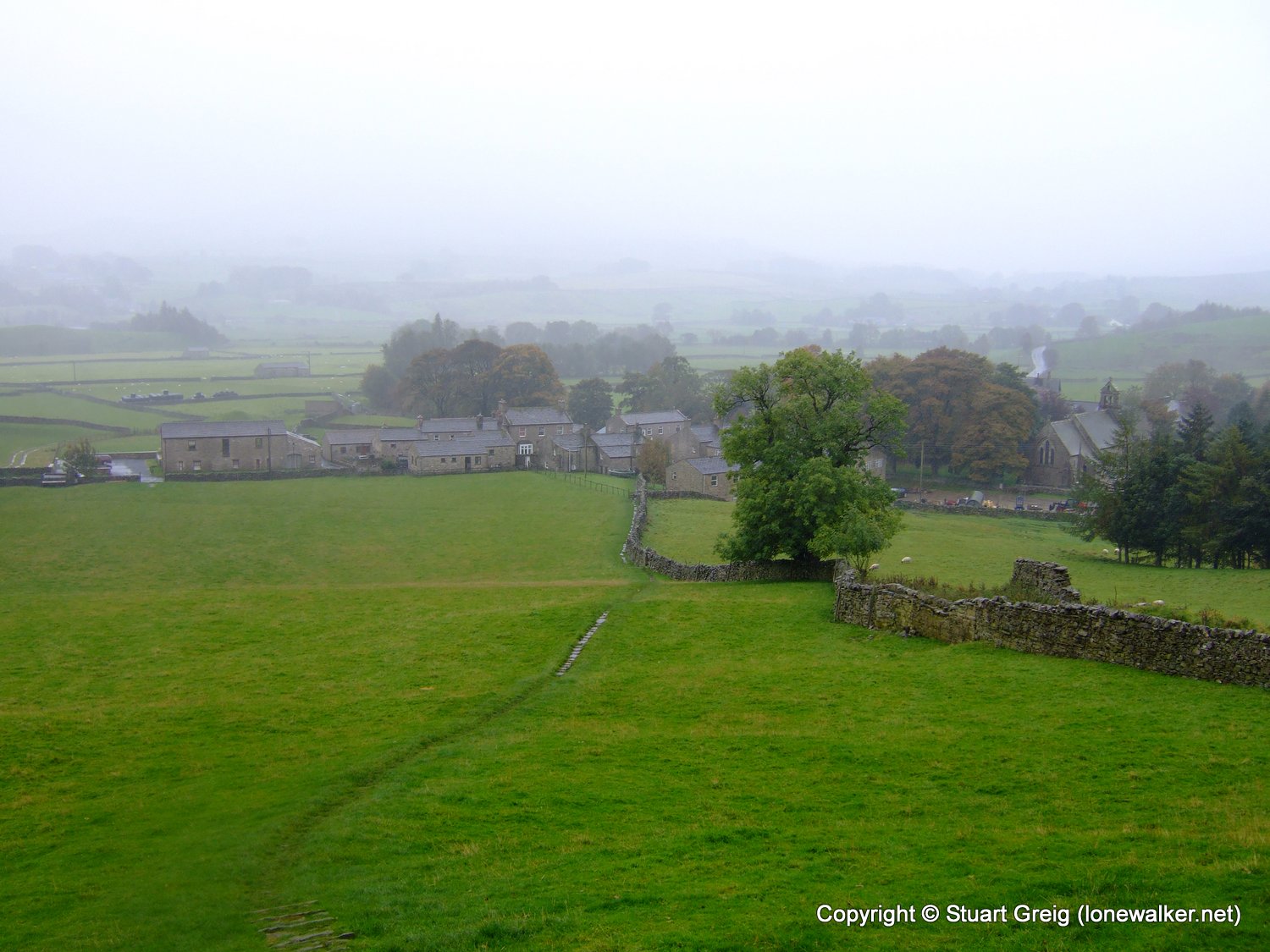 Path through the fields into Hardraw

I turned off the road just before Simonstone and followed green fields back to Hardraw and the warmth and comfort of the car. My waterproofs don’t seem to be cutting it though and I was pretty much drenched under them. The top half of my trousers were soaking and that’s not happened before – I don’t have much faith in reproofing, so I may need to review the status of the piggy bank.