Download file for GPS
Today, I decided to follow a route I did two years ago with Journeyman; mainly because I wanted to bag a trig point that I missed on that walk, but also because I wanted a nice long walk to stretch the legs for next week, when I am planning to have a crack at the Yorkshire 3 Peaks. I figure that at the moment, I’m probably as fit as I’ve ever been and I want to take advantage of that and complete some of those big walks I’ve been promising myself for ages. Those include the Yorkshire 3 Peaks, which I attempted and failed 2 years ago, the Snowdon Horseshoe, the Scafells and possibly the Lyke Wake Walk.

I left Kettlewell at 08:00, along with several people all wearing high-viz jackets under their rucksacks. I’ve never considered hill walking to be that dangerous! It turned out they were the first of several hundred people I saw during the day, all walking some sort of charity event from Kettlewell. 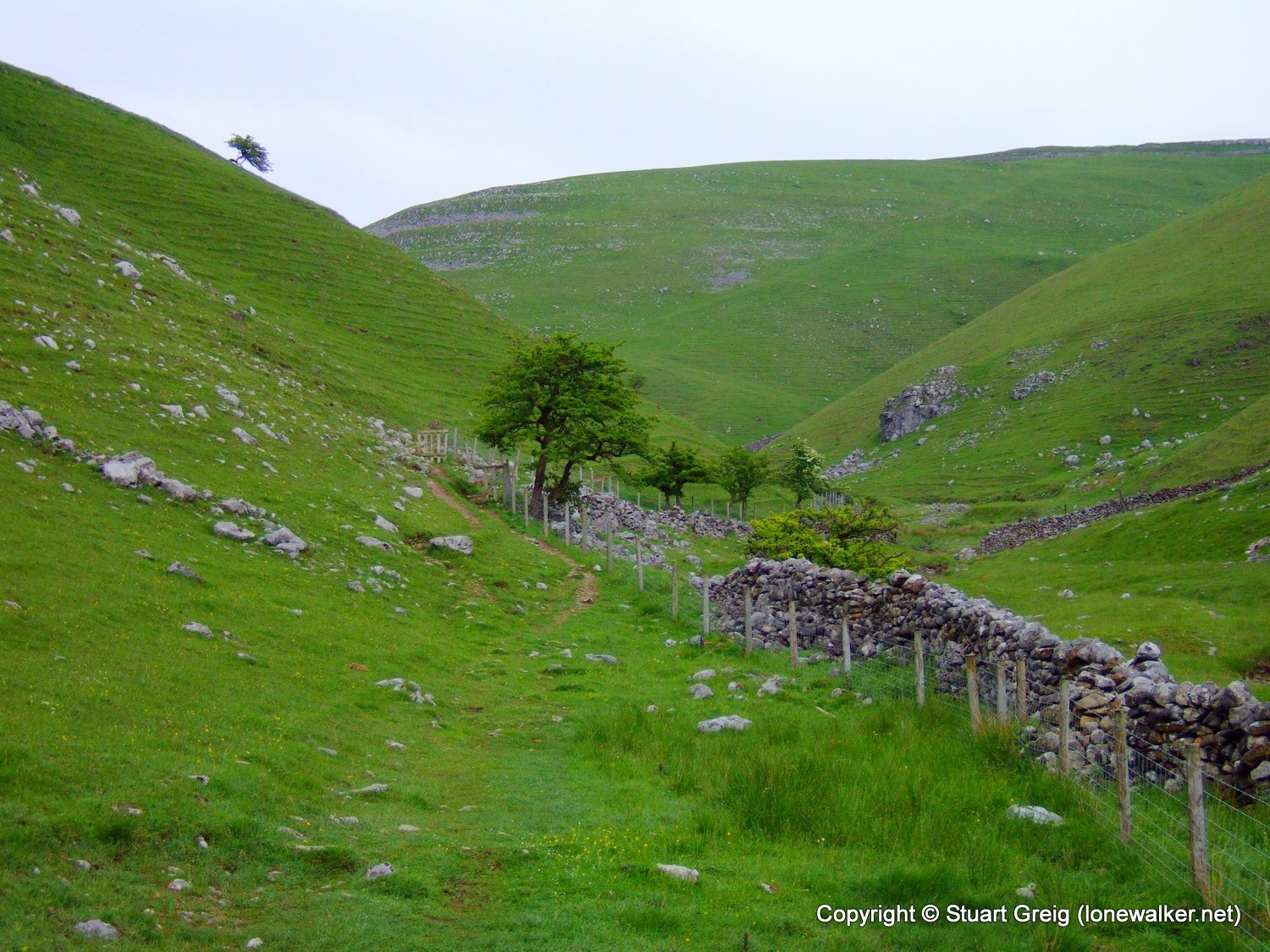 There are two routes up to Hag Dyke from Kettlewell. The path that runs alongside the Beck is by far the prettier, while the other one runs across open fields and pasture. The path by the Beck also leads to Providence Pot, the start of a very popular pot-holing and caving route. 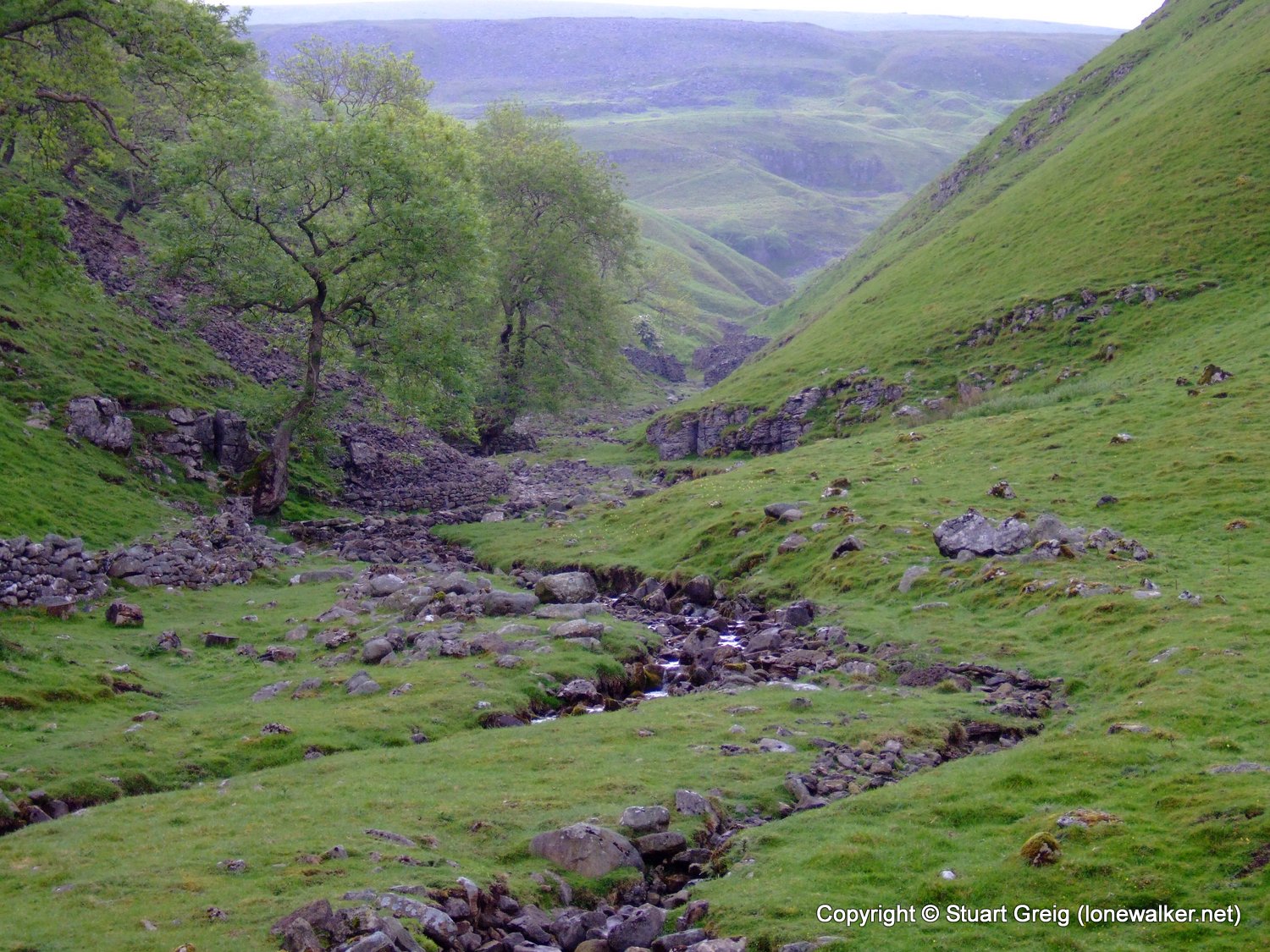 It may look a little murkey this morning, but the path by the Beck is charming; it twists and turns with the stream and climbs up and down the bank. 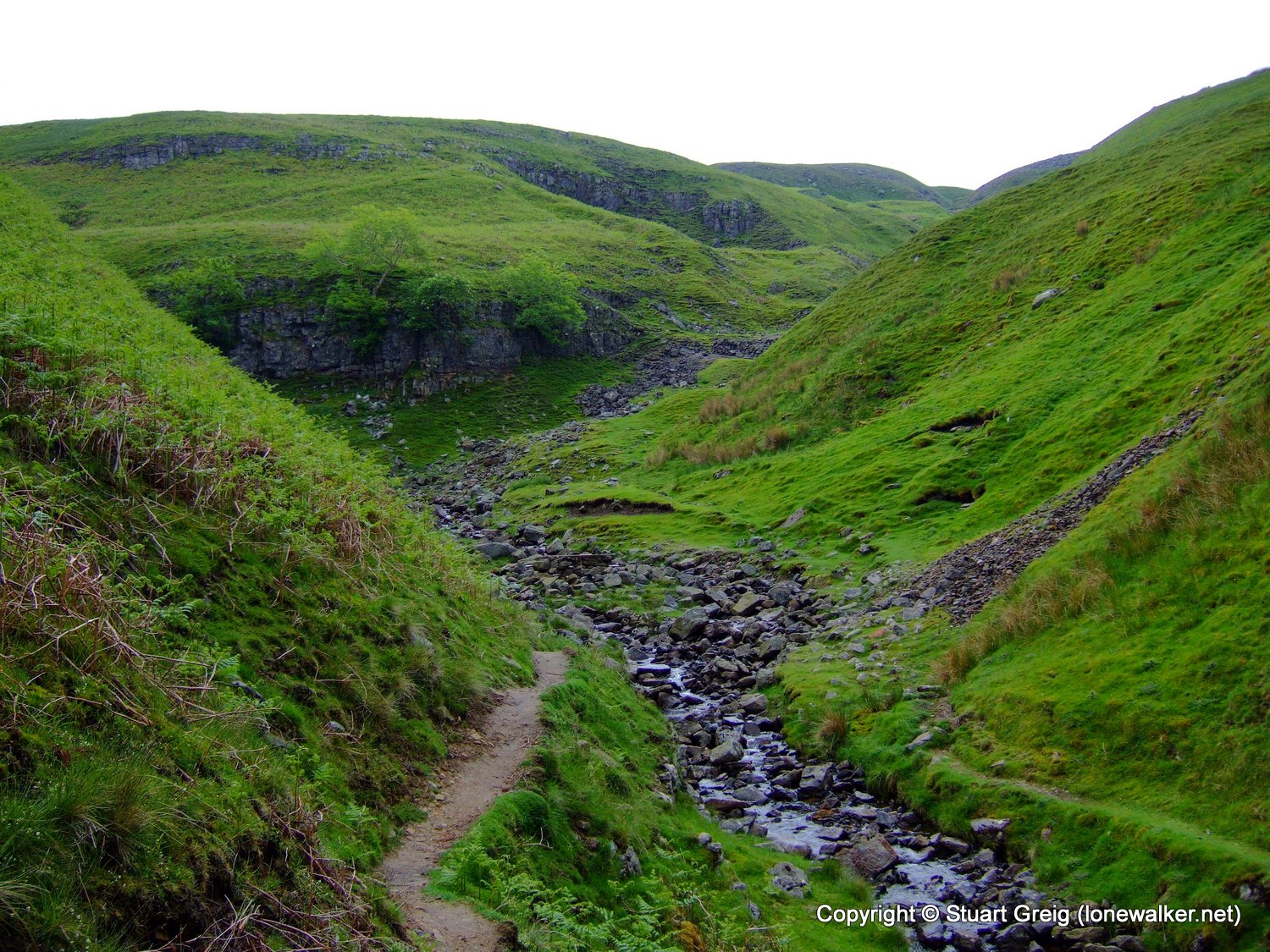 It’s not easy to spot from this picture, but the entrance to providence Pot is a concrete man-hole cover in the middle of the Beck, almost exactly centre of this shot. This leads to Dowbergill Passage and comes out at Dow Cave about a mile away. The picture below is taken with the flash, through an access hole in the steel plate covering the entrance to the Pot. People choose to go down there! Mad sods! 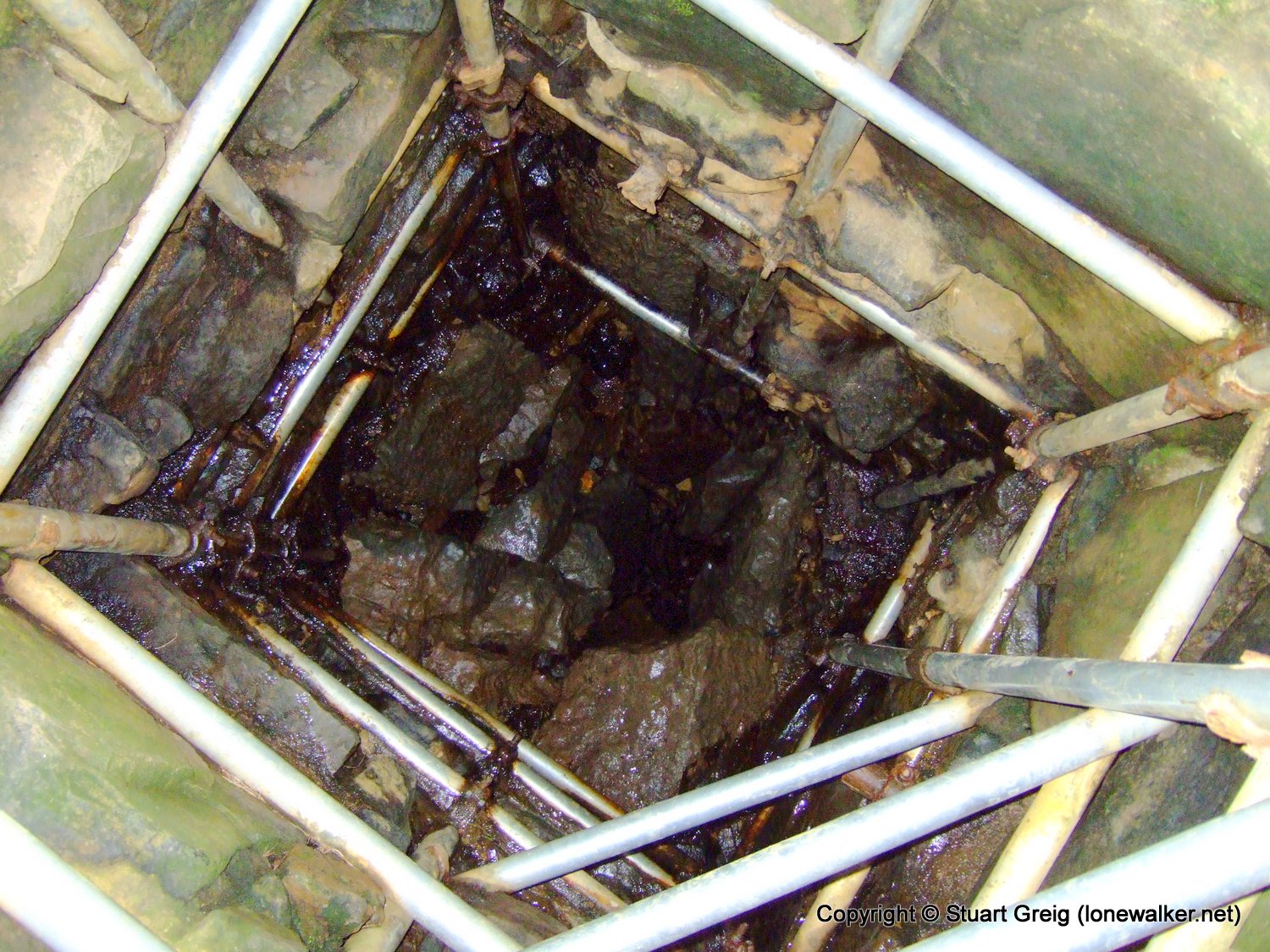 The view down Providence Pot 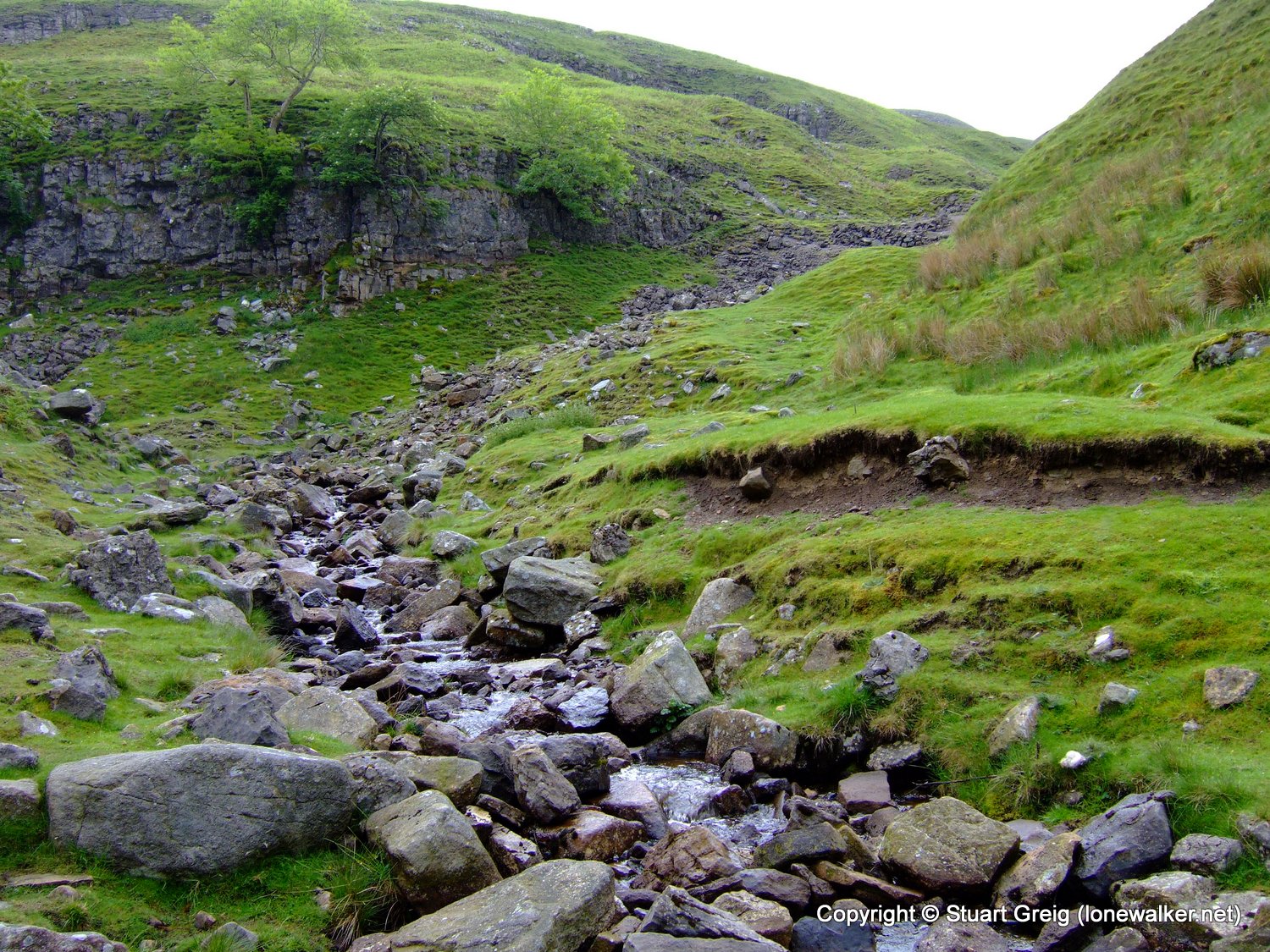 The cut-back path to Hag Dyke 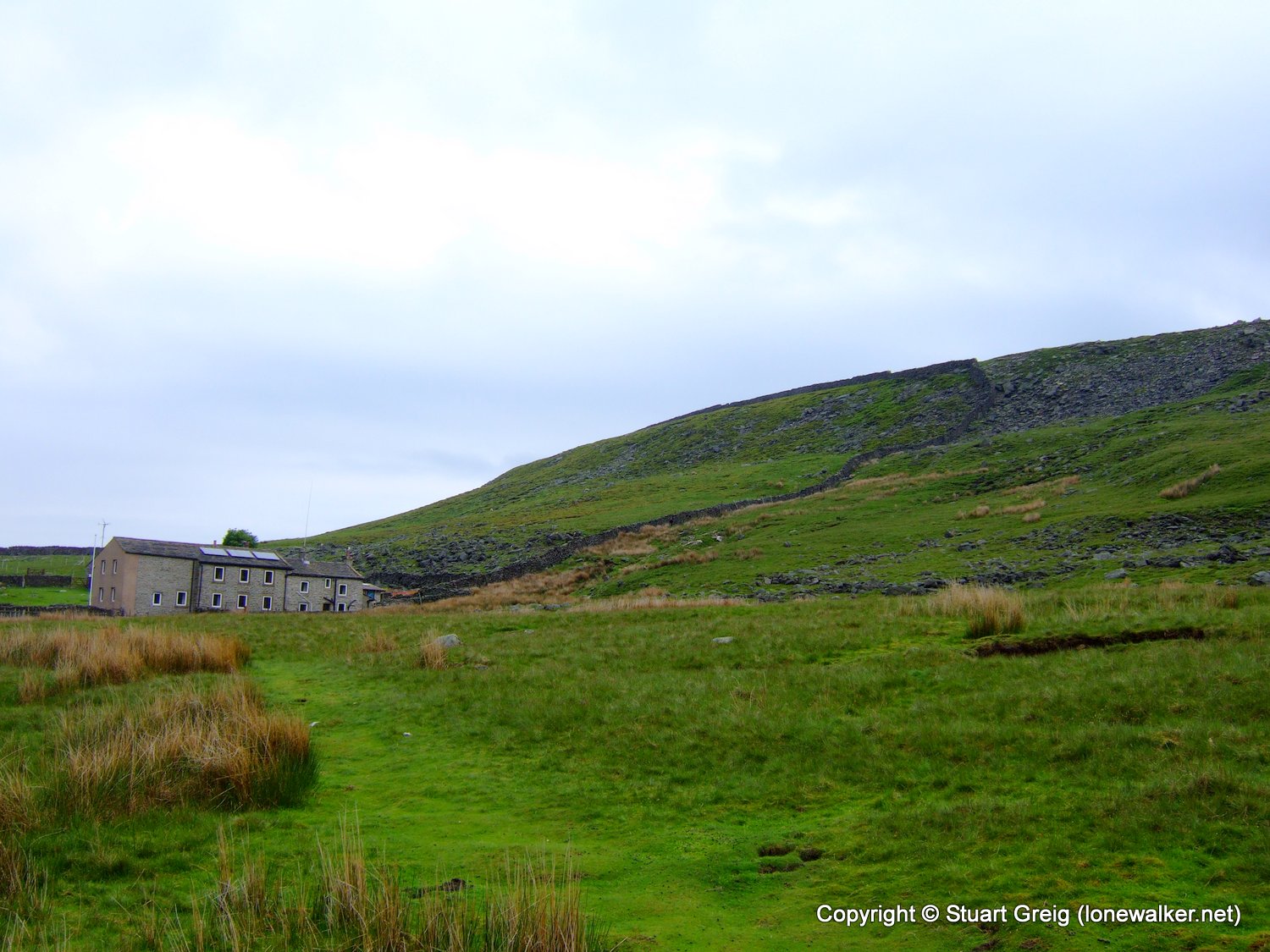 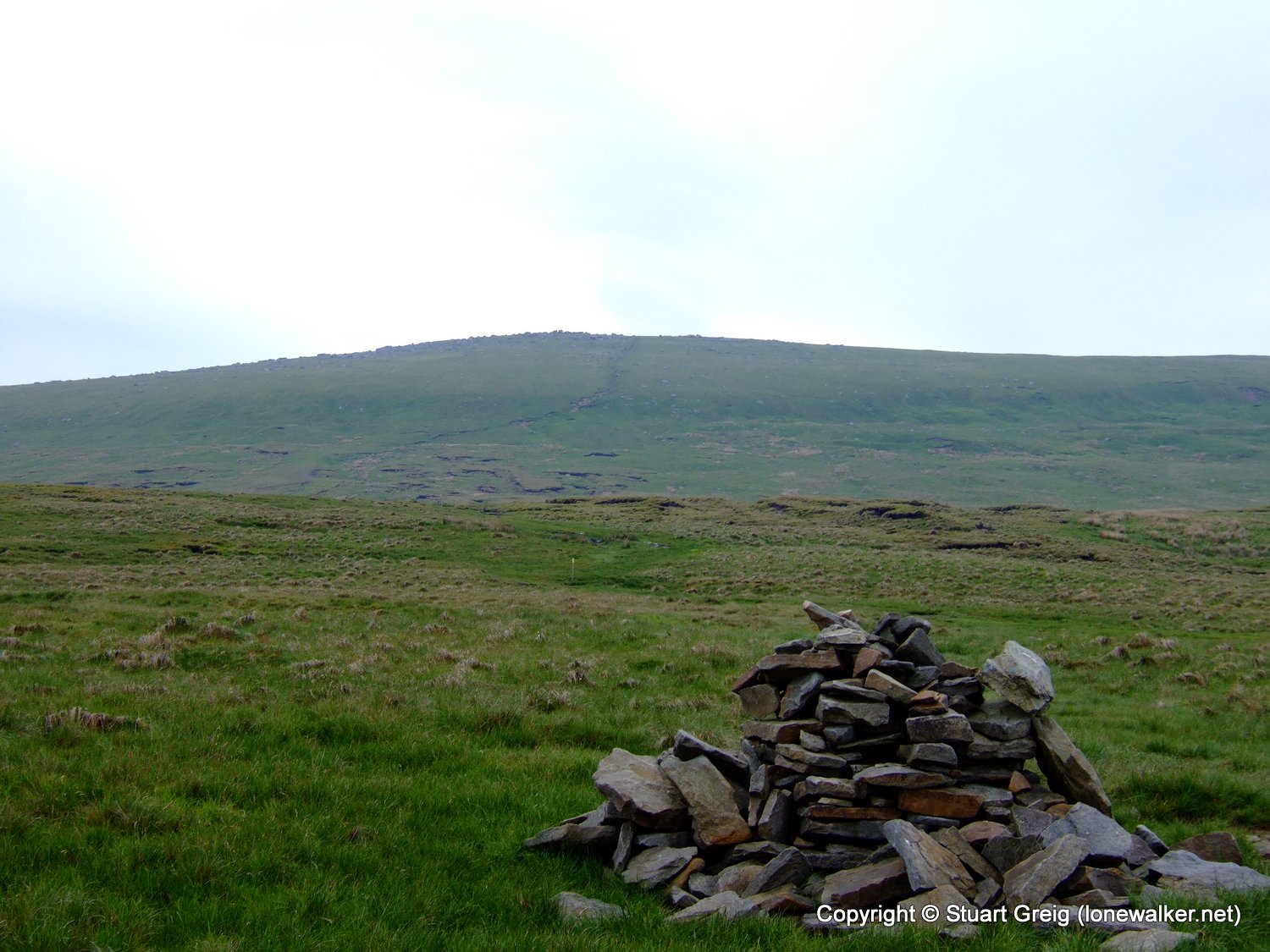 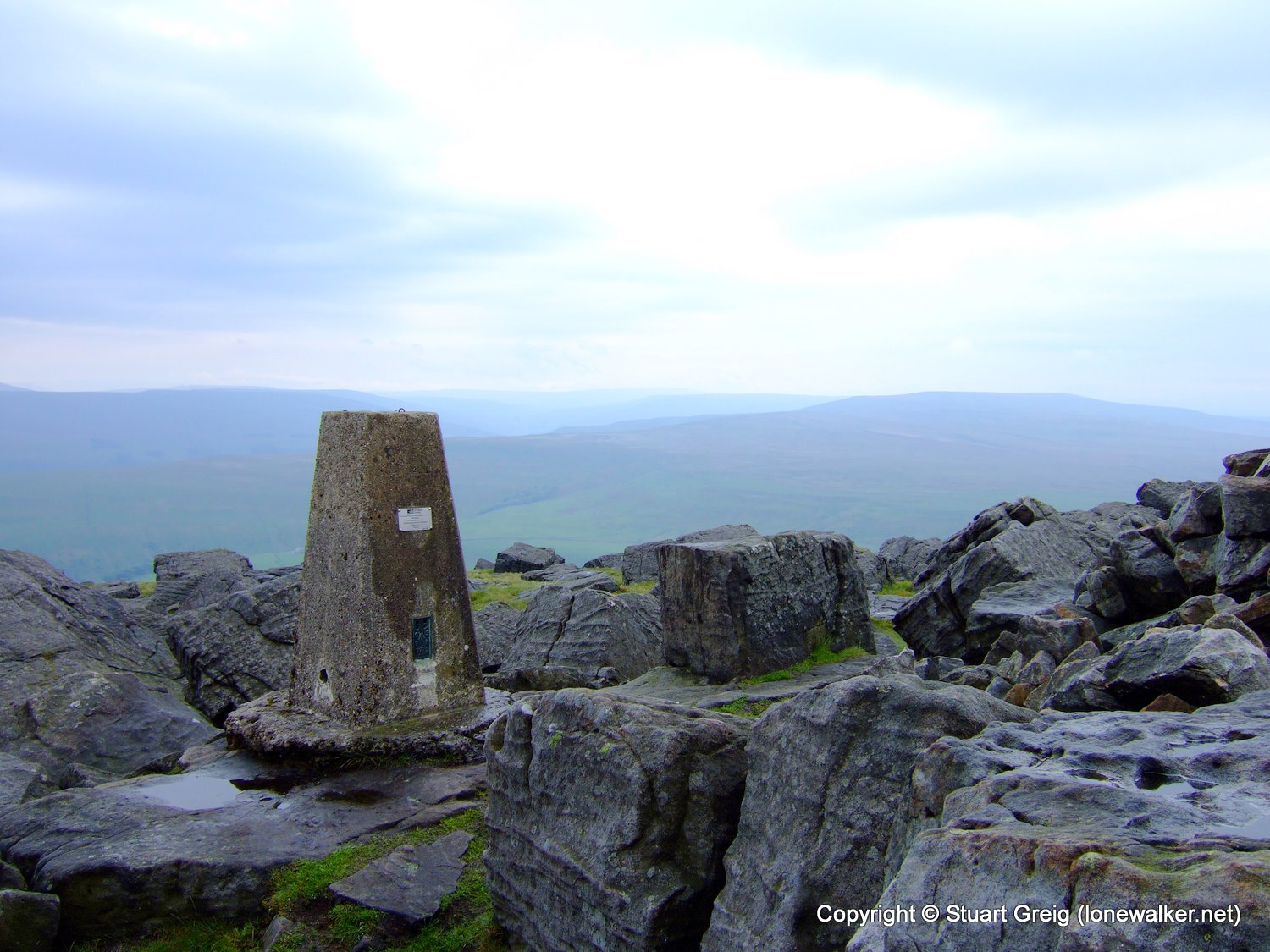 The trig point on Great Whernside

It was windy on top and I had to don my fleece to prevent cooling down too much. It had been drizzling very slightly for a while now and had obviously been raining overnight as there was a lot of standing water. So much for the summer. 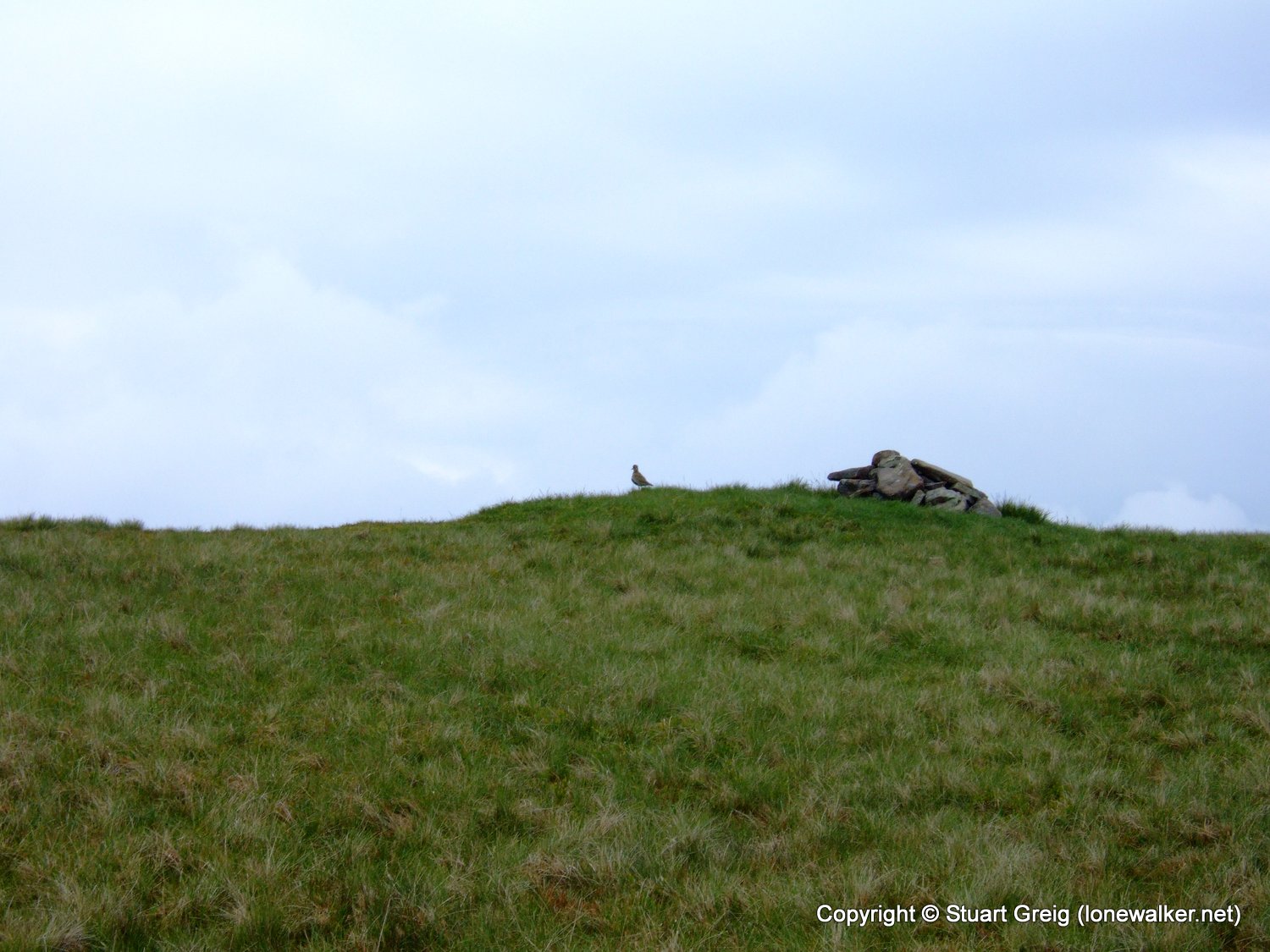 There were so many birds around today, so much more than you see in the Lakes. This was the only picture I managed to take of the birds that went “peep”. There were hundreds of these things, always just out of sight, but going “peep” all the time. There were also a load of birds that went “peep peep”. These were different birds, not just the “peep” birds calling twice. There were also big brown birds with long curved beaks that called an intricate whistle. It was all very baffling as you can tell and quite noisy 🙂 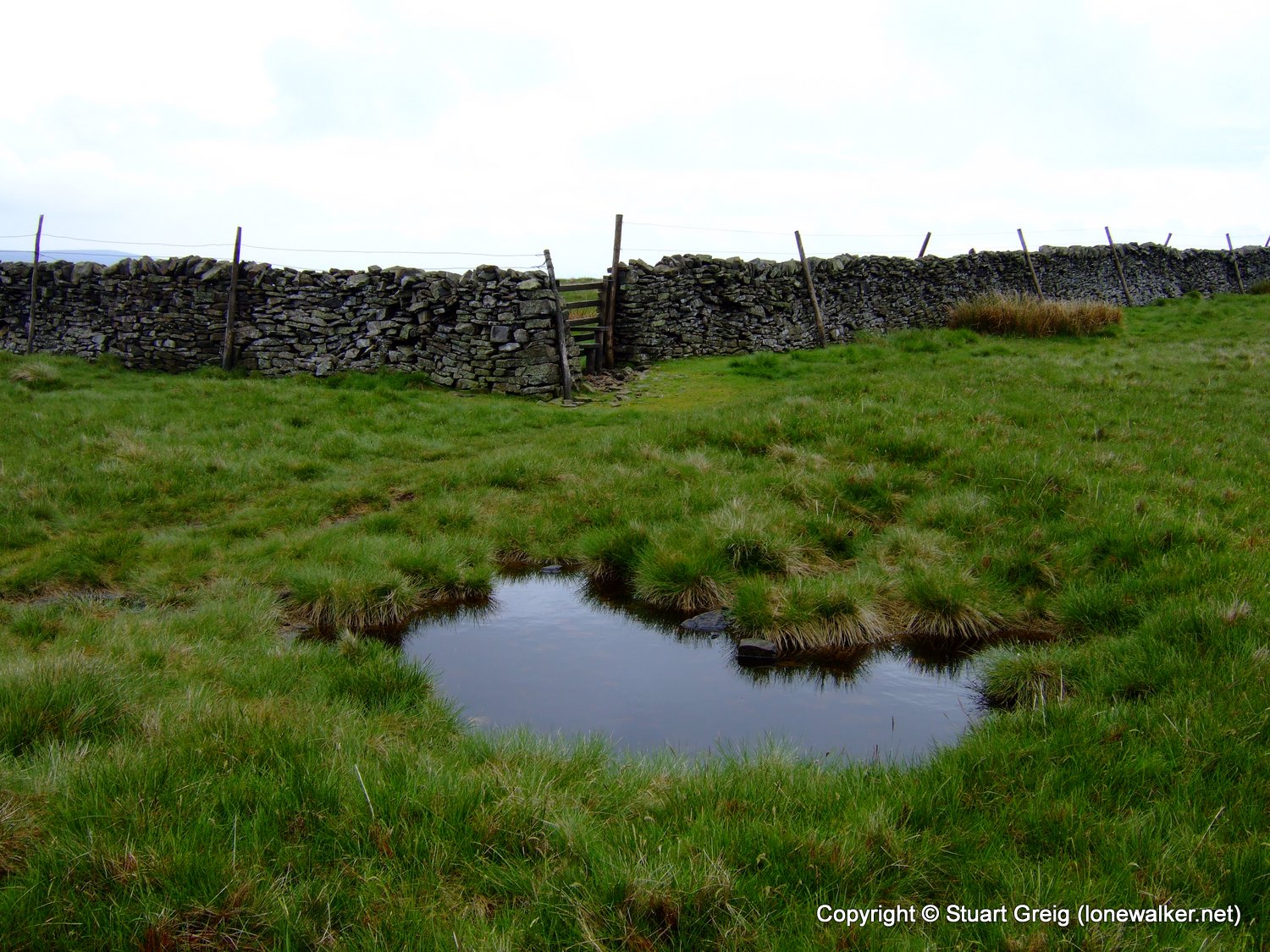 The wall at Black Dike 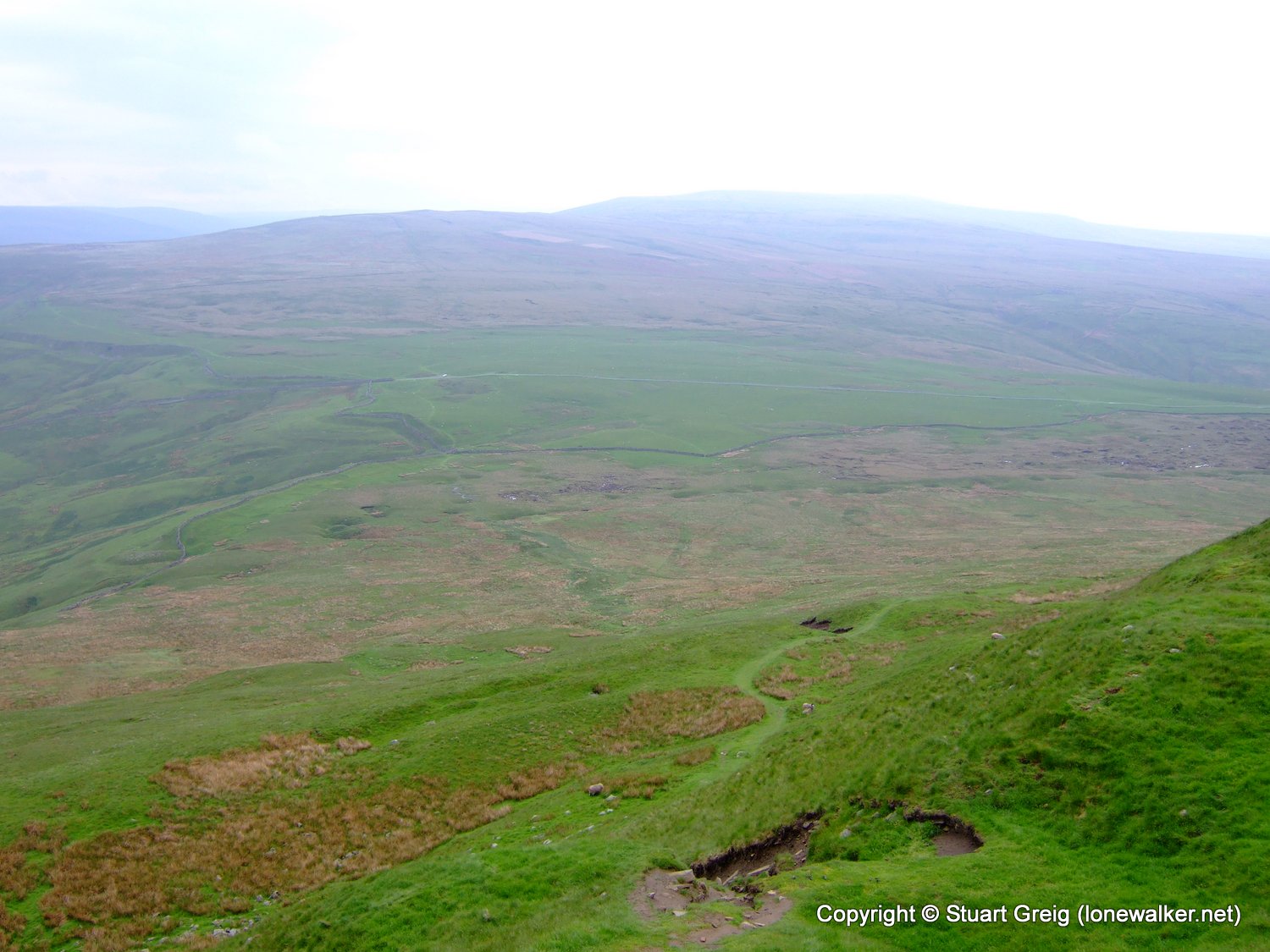 Looking down on Great Hunters Sleets 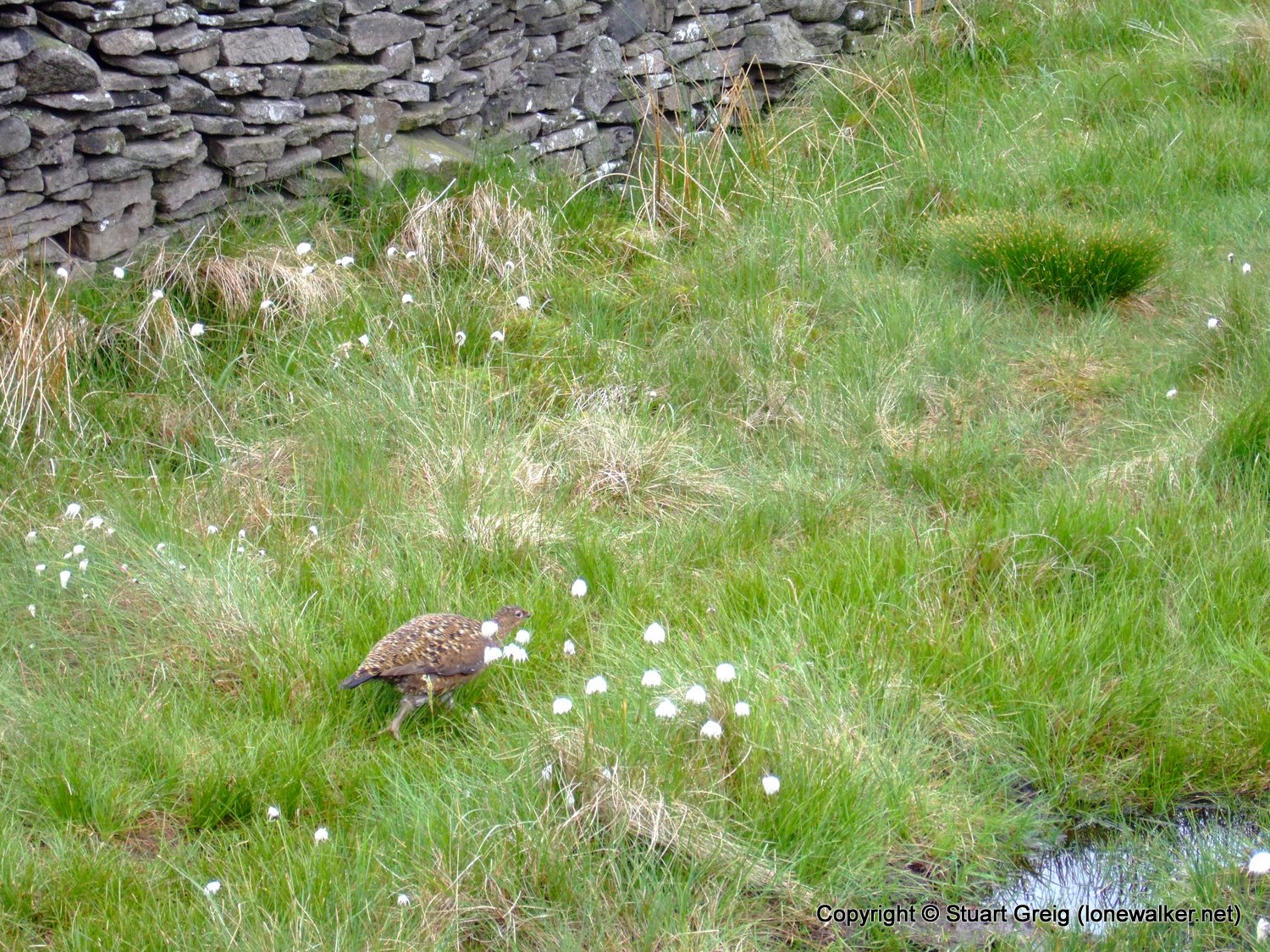 Lazy grouse, running away – this bird refused to fly, maybe it was too young? 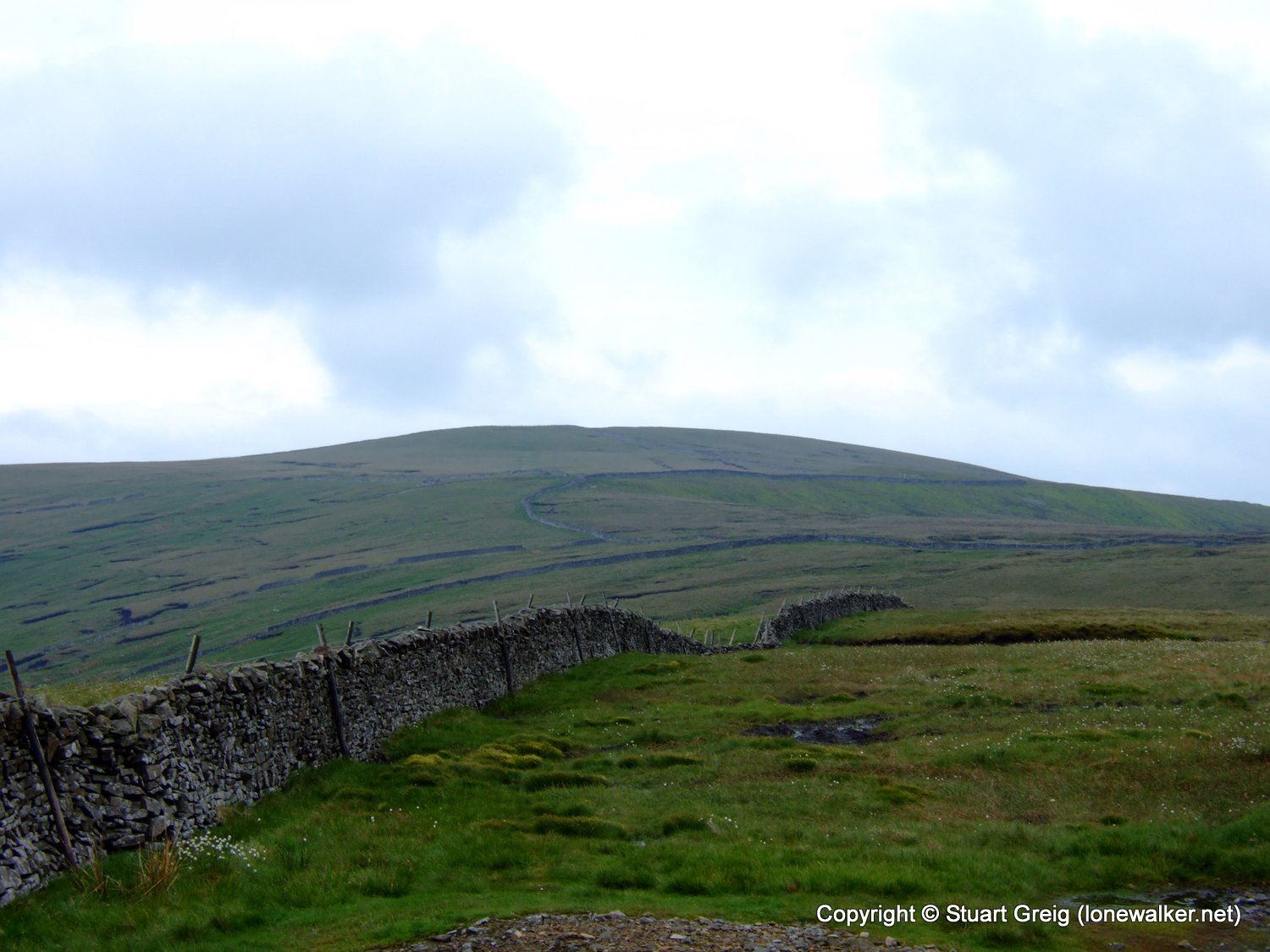 On approach to Buckden Pike 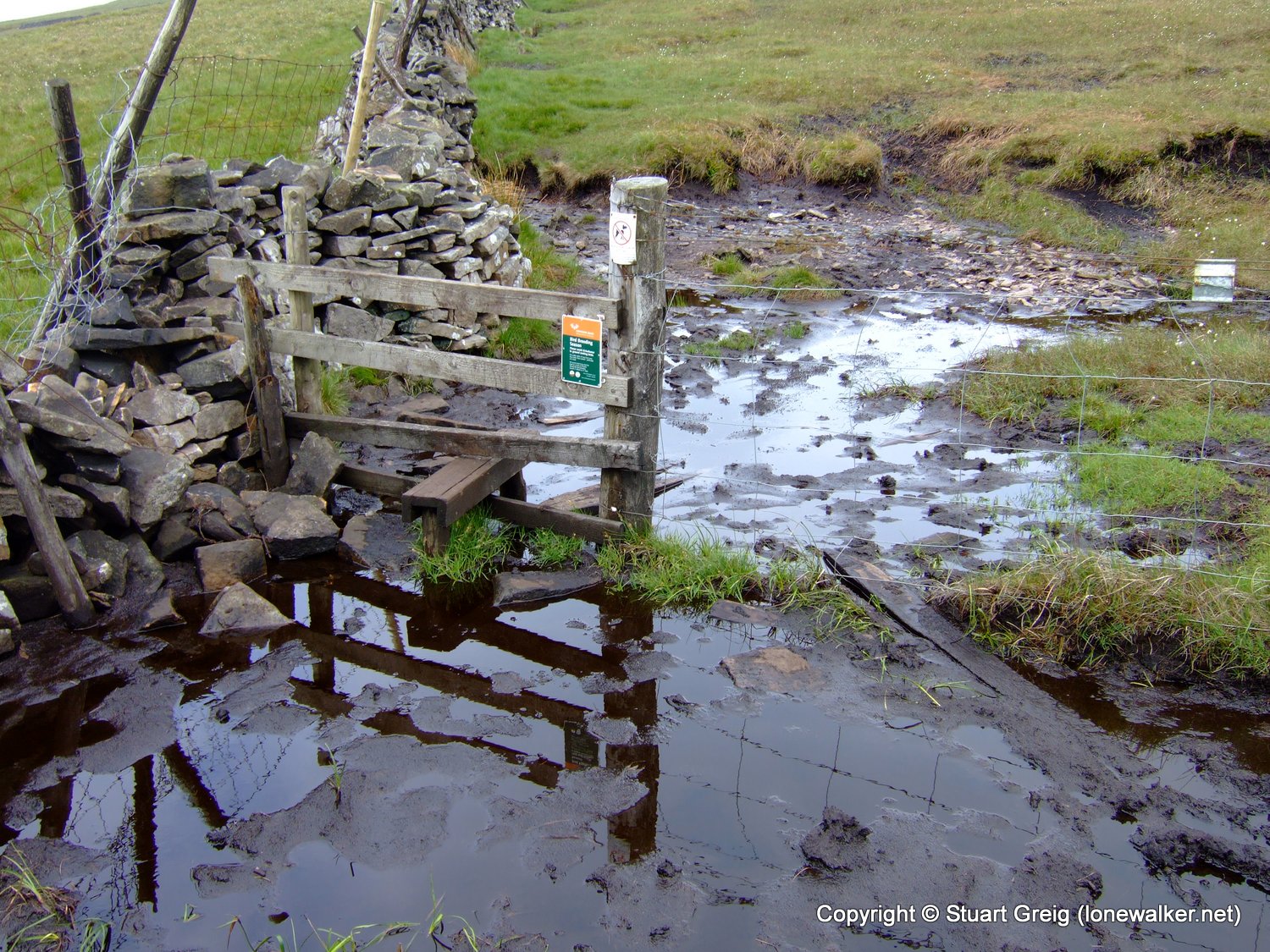 It got rather muddy in places 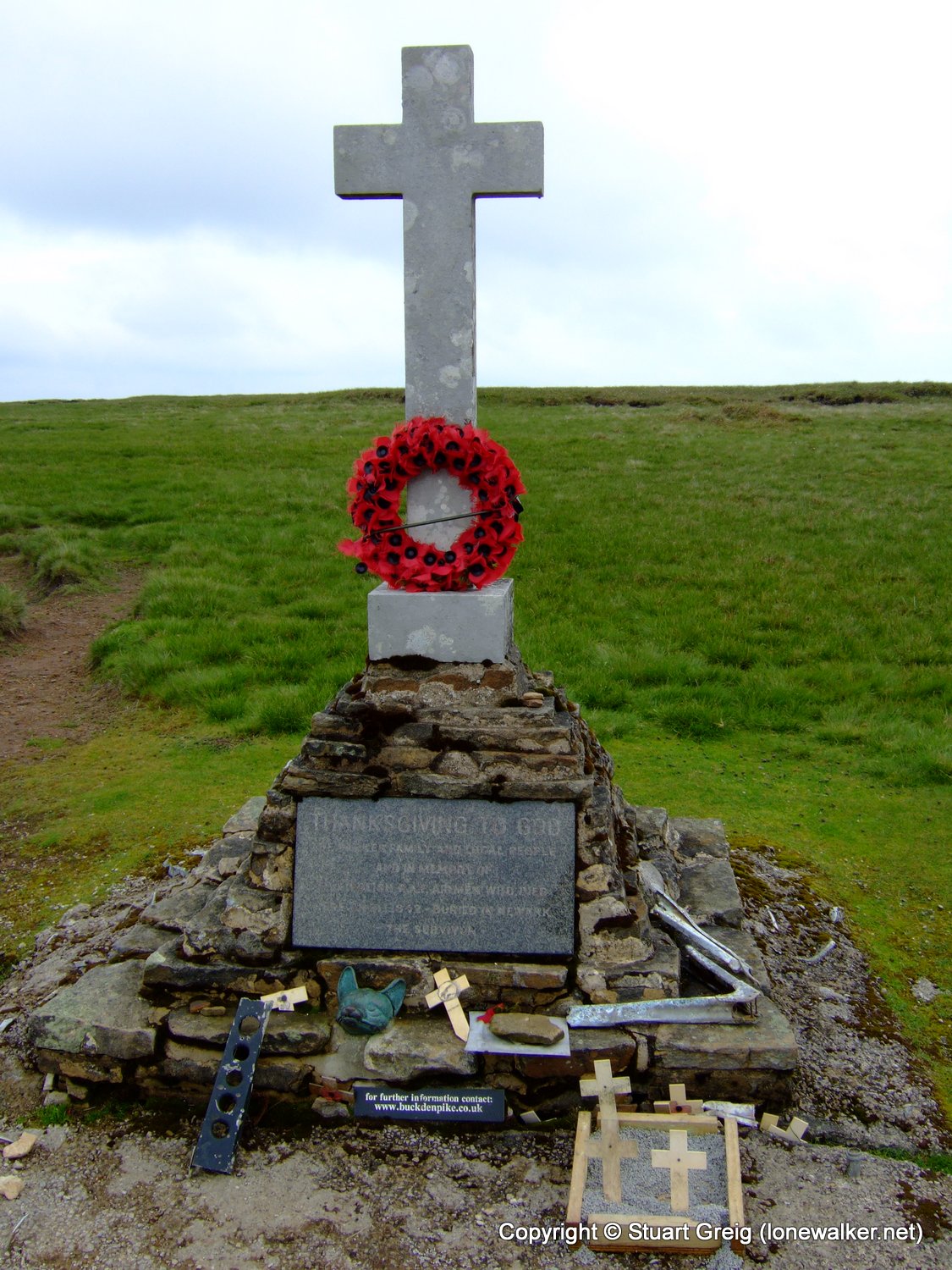 The story goes that a Polish RAF aircrew crashed on the hillside in a fierce snowstorm in late January 1942. Four of the crew died on impact, the radio operator was in really bad condition and the rear gunner suffered a broken ankle. In order to save his colleague, the gunner realised he had to go for help, so he wrapped the radio operator in a parachute, grabbed a piece of wreckage as a crutch and stumbled off into the blizzard. Not knowing which direction to take he took the path of least resistance and put the wind at his back. After a short while he saw the footprints of a fox, heading across his path. He knew that the fox would be heading for a farm; for possible food and shelter, so he followed the tracks as best he could down the hillside. He eventually found rescue at the White Lion Inn in Cray. Sergeant Joseph Fusniak was awarded the British Empire Medal, but could not be considered the luckiest man in the RAF as he was shot down 5 months later over Germany and spent the rest of the war in POW camp. 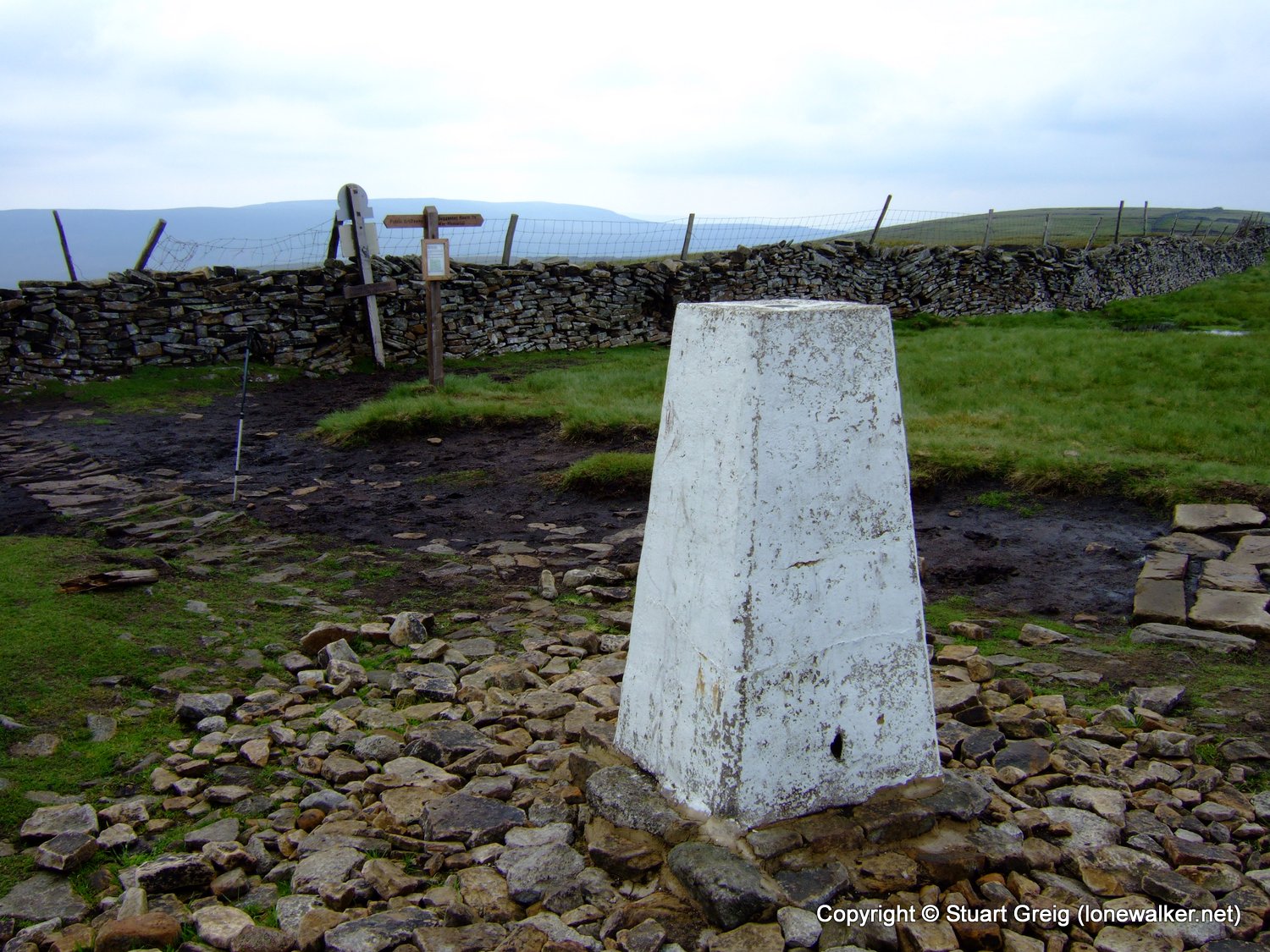 The trig point on Buckden Pike 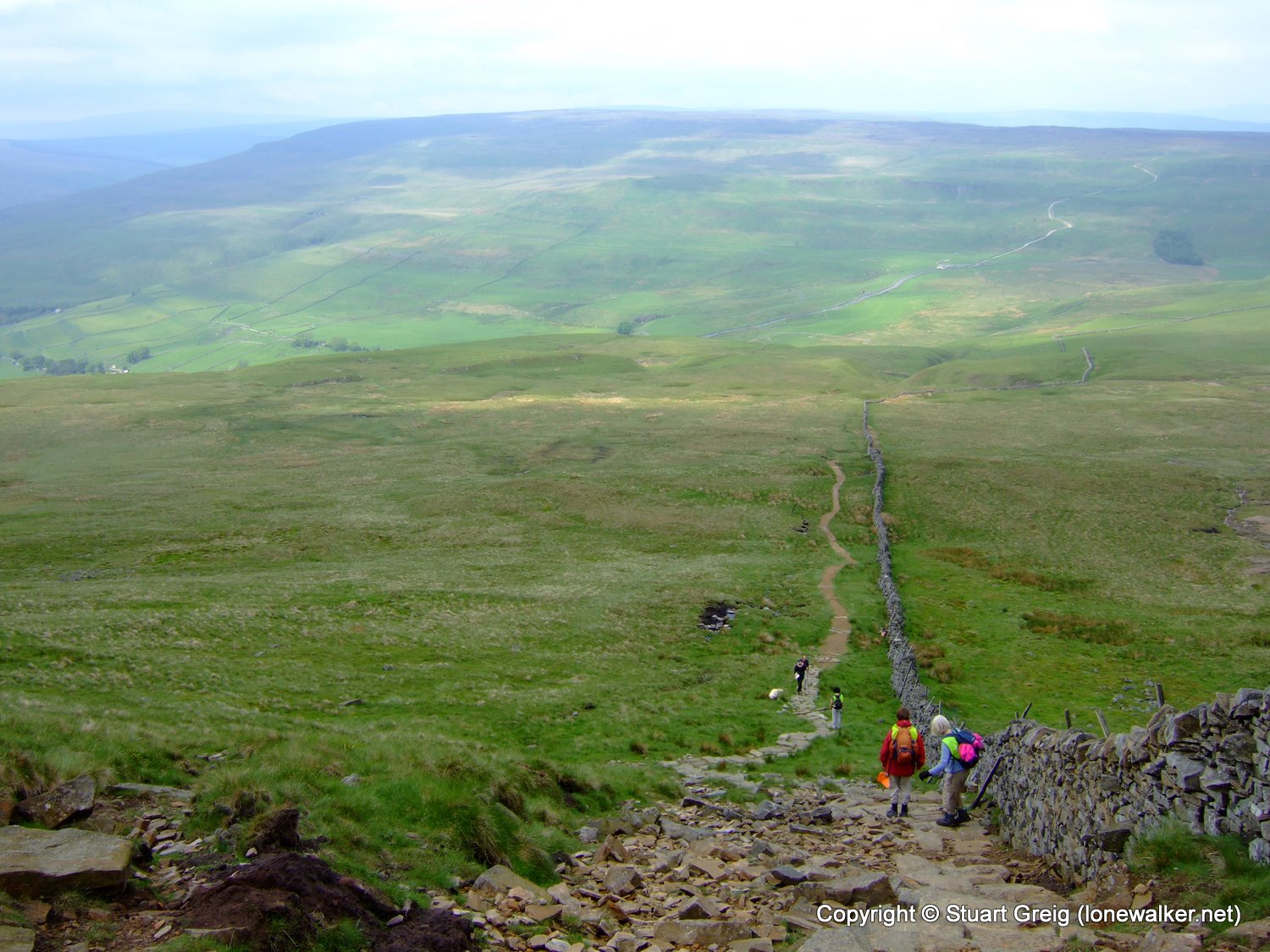 The path down to Buckden 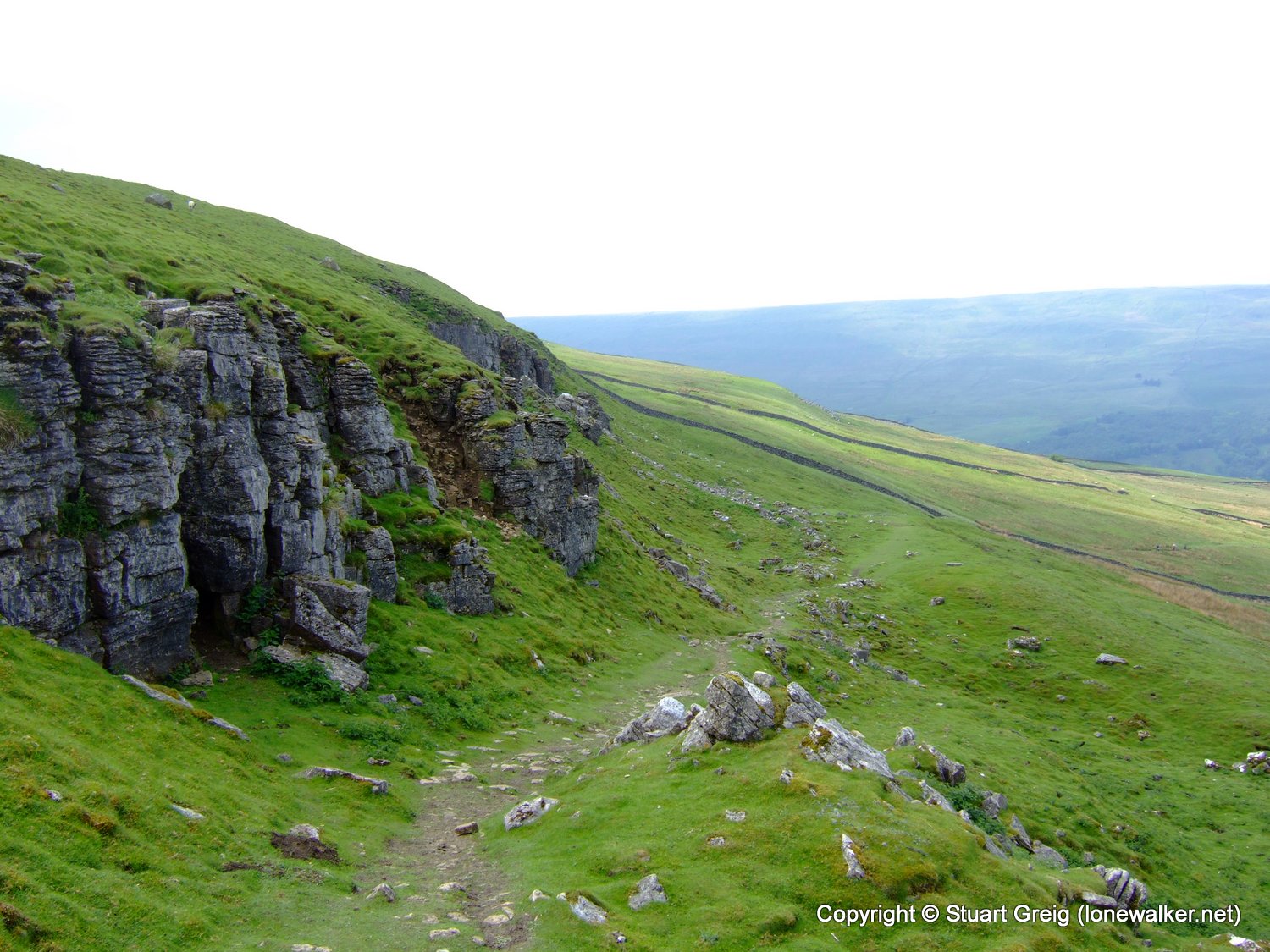 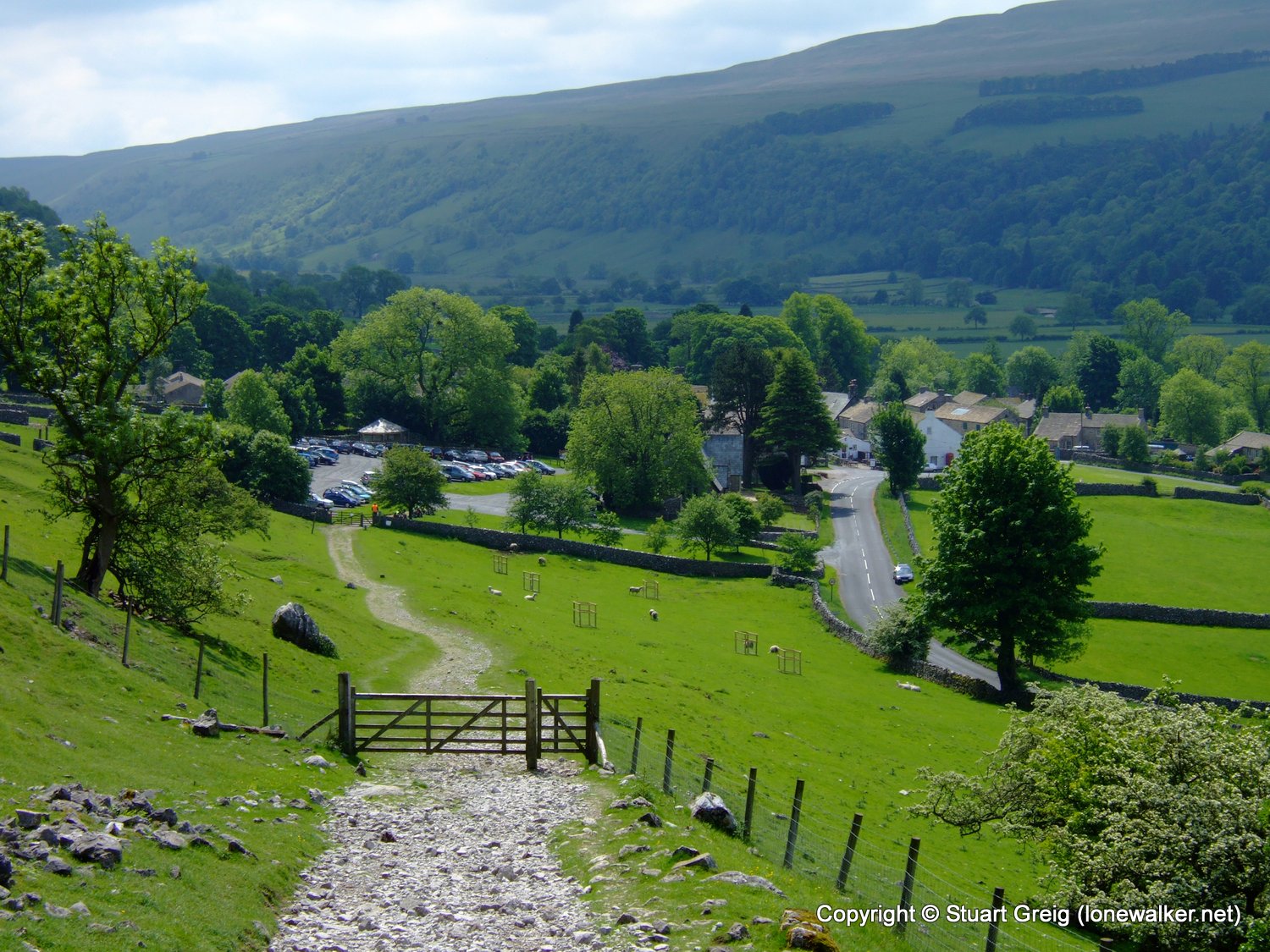 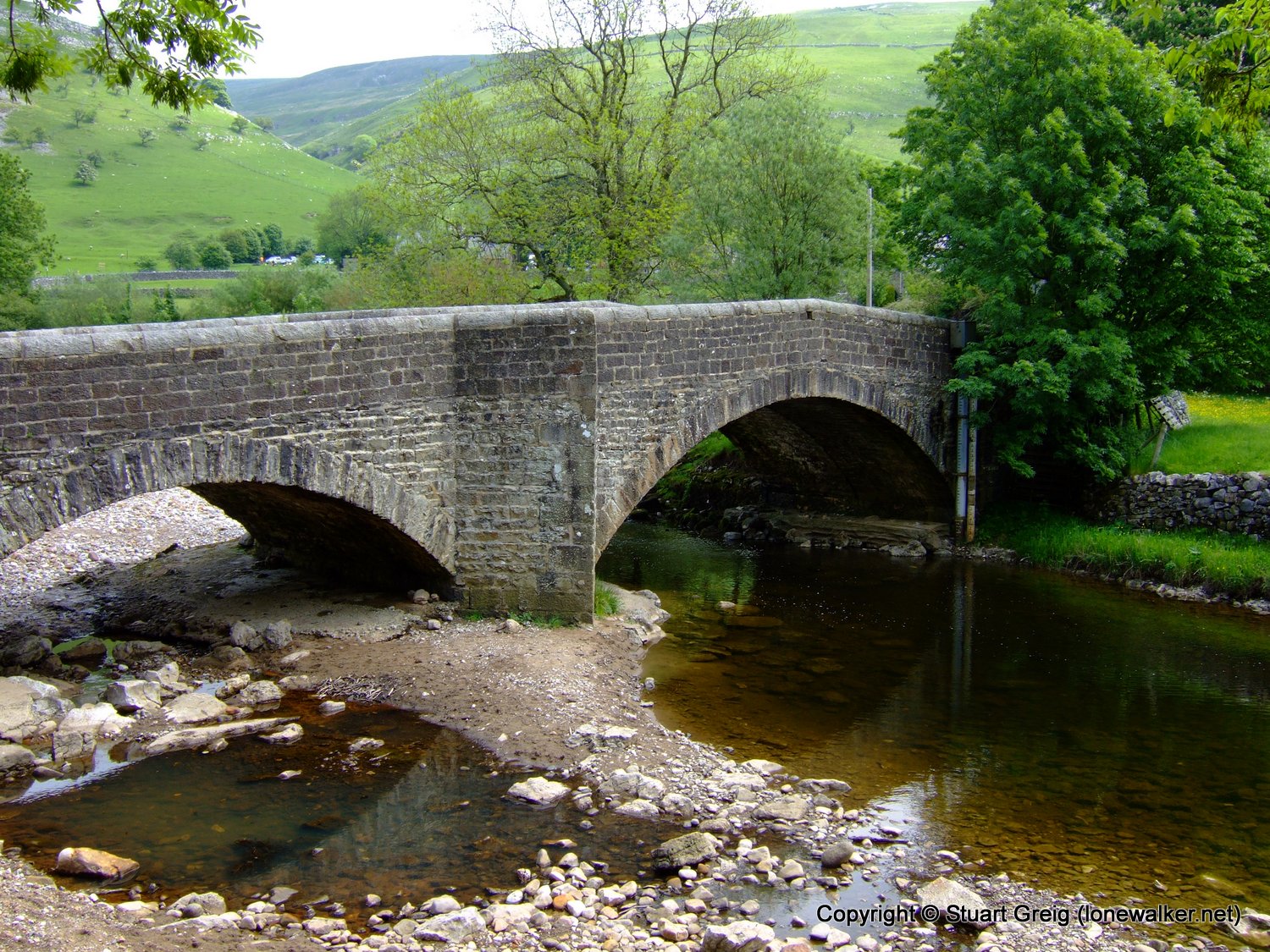 The bridge over the Wharfe just outside Buckden 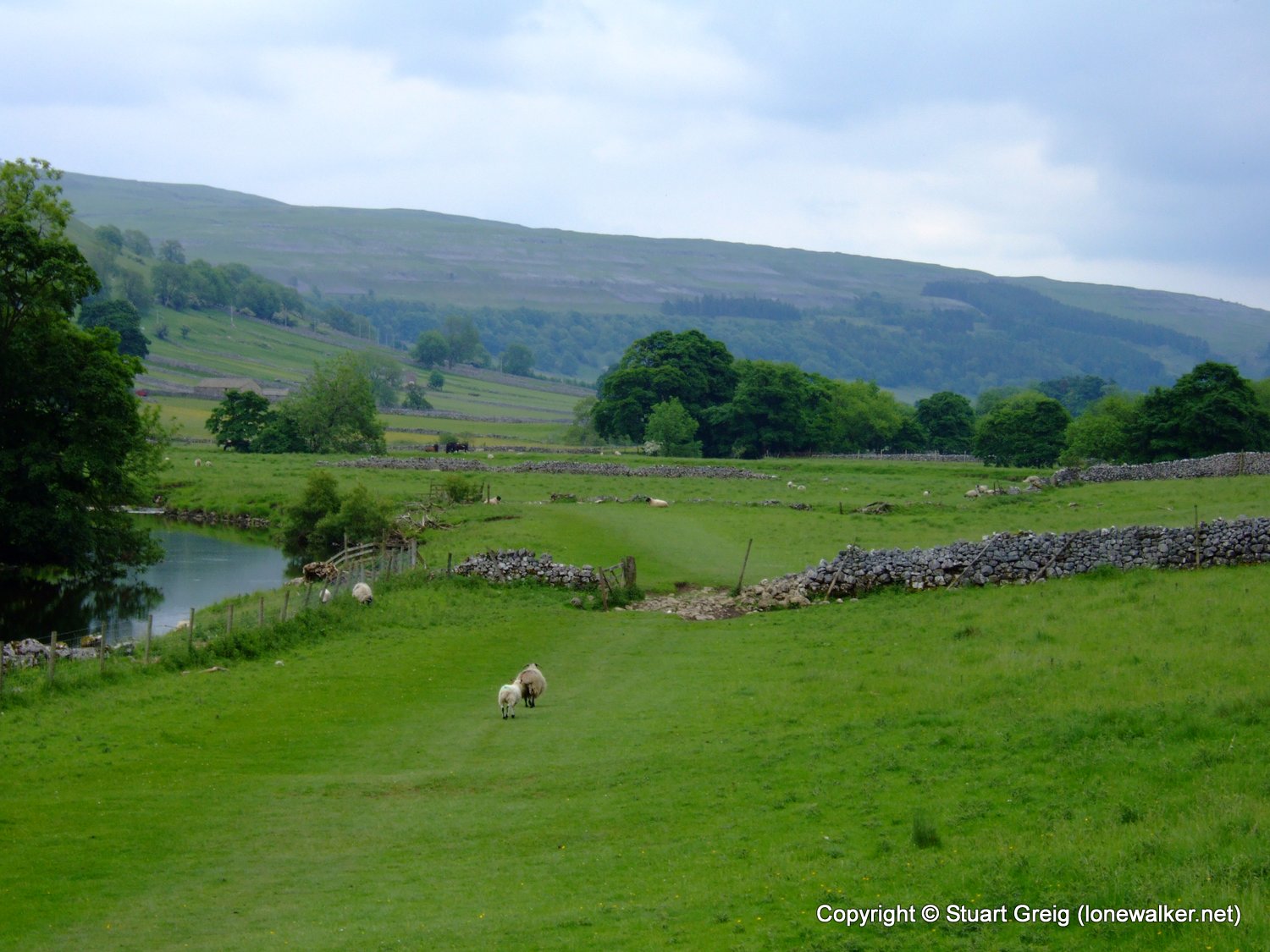 Just two of the souls walking the Dales Way today 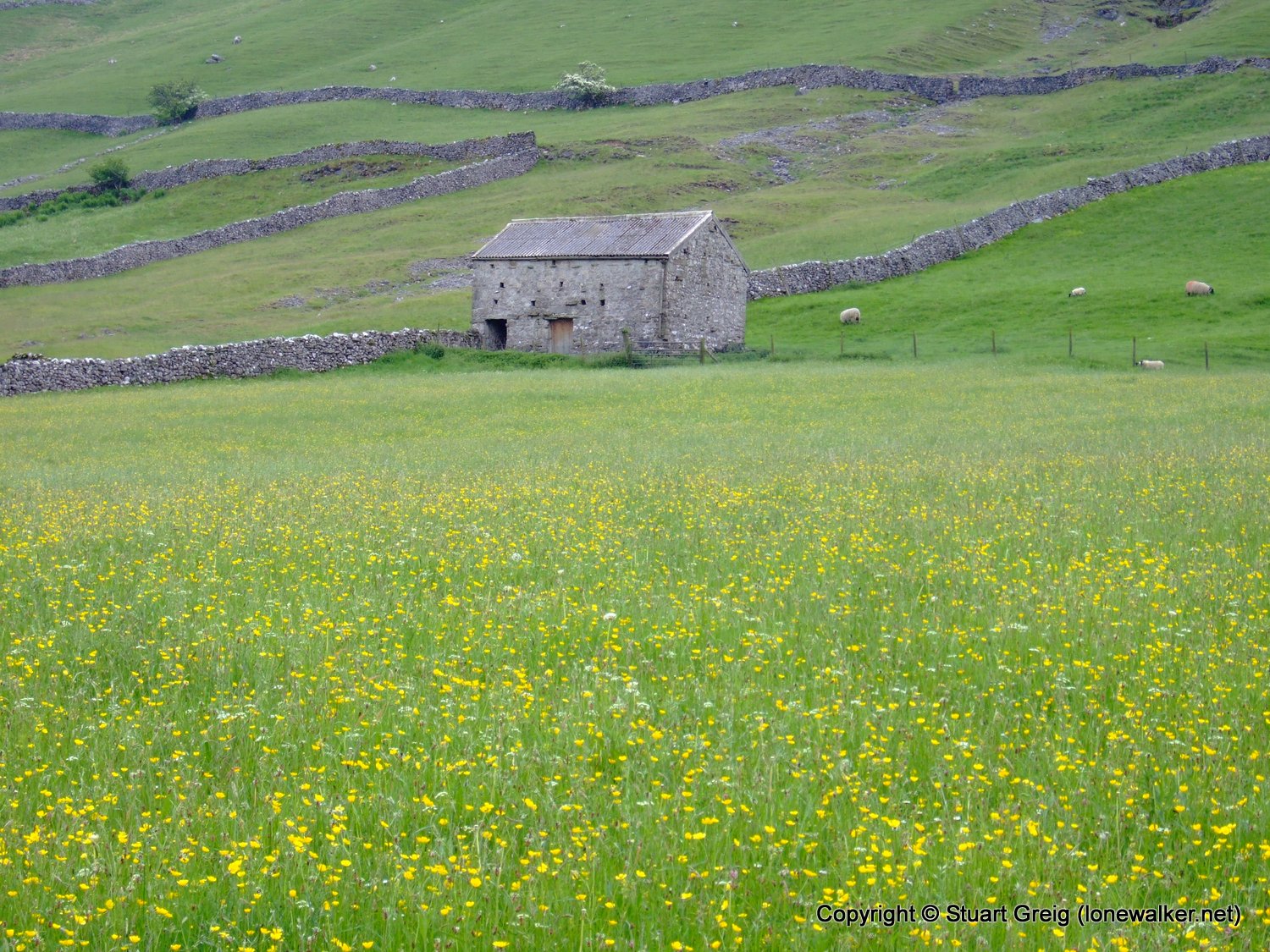 Field barn and summer flowers – where else could it be but the Dales?