After postponing this walk several times because of adverse weather forecasts, I decided that enough was enough and this weekend I was going to attempt it whatever the forecast. It coincided with a weekend Rambling Pete had free, so we set off early for the Lakes with a semi-promising forecast from Metcheck and the MWIS.

We arrived in Glenridding at 07:30, after stopping a couple of times on the journey to gawp at the jaw-dropping scenery that revealed itself in the distance. No sign of bad weather on the far fells, just sun dappled greenery with a high layer of cloud well above the tops.

We were about the fourth car to arrive in the car park, but we were the first to walk out of it, the other walkers standing around and chatting, presumably waiting for friends. This suited us just fine, we were hoping for a clear run along Striding Edge, one of the main reasons for turning out so early on a summer Saturday. I’ve seen pictures of people queuing along Striding Edge and neither of us wanted to suffer that. 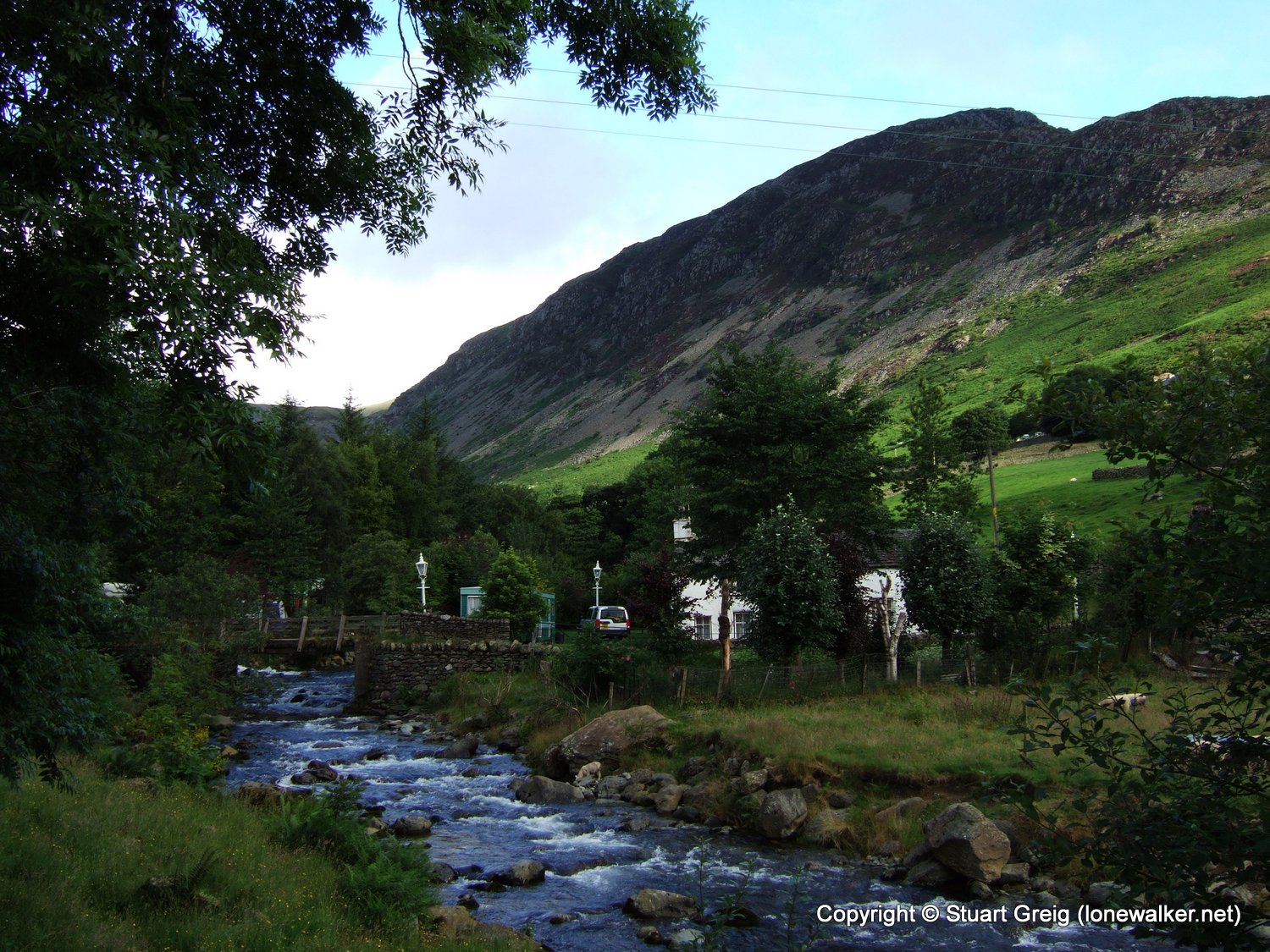 We passed a couple of densely populated camp sites, covered in tents and trailers and awnings of every colour and size. I have no idea how (or indeed why) people put up with this sort of accommodation. It must be awful. There was a toilet block close by and a burger van selling bacon rolls to the masses. It was a little early in the walk for us to be taking a break so we pushed on and left the great unwashed behind. 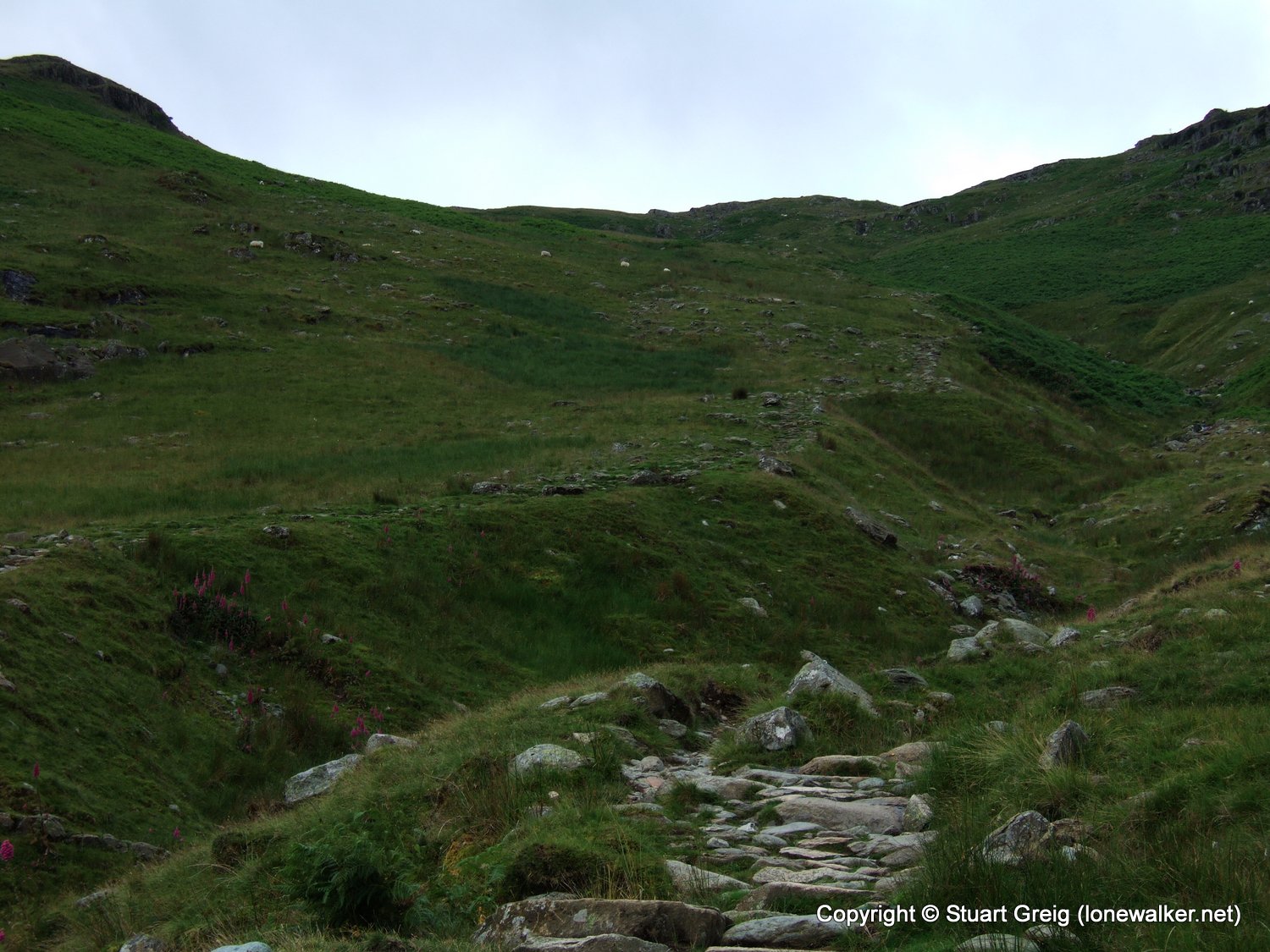 The path rises towards Birkhouse Moor 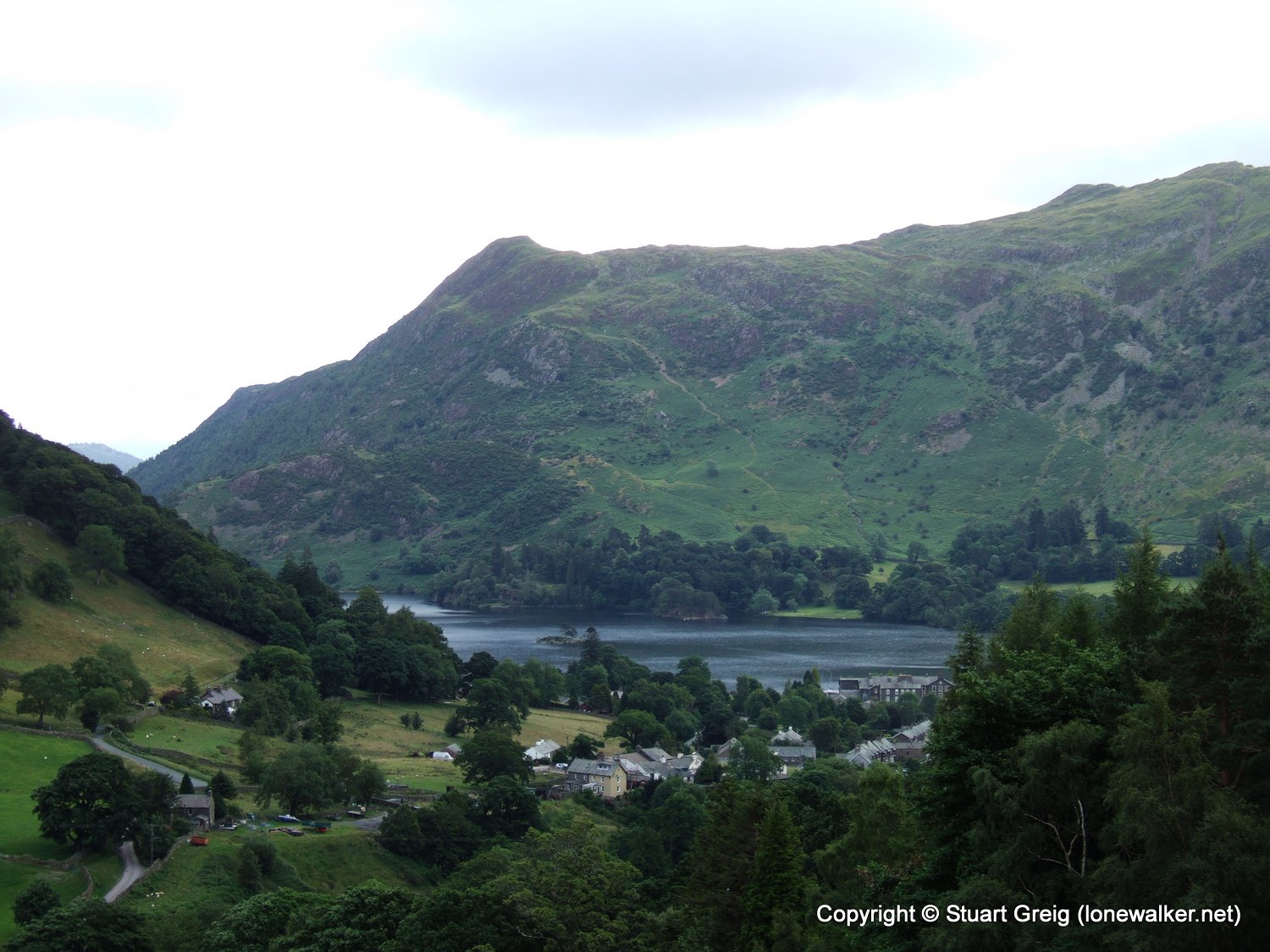 Birk Fell above Ullswater and Glenridding 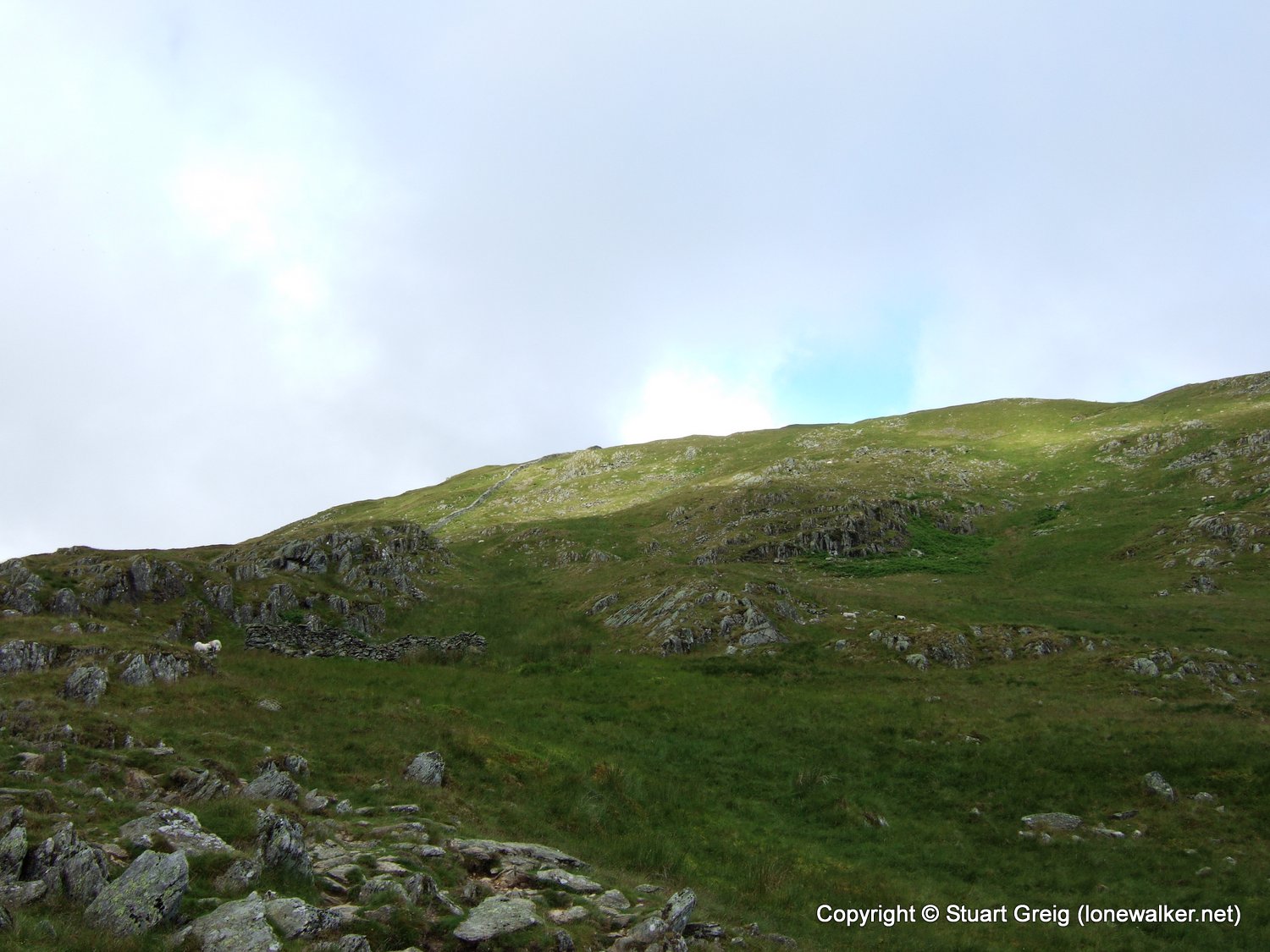 The views behind us, as we climbed Birkhouse Moor, to Place Fell and the other Far Eastern Fells were fine and clear and gave us a feeling of optimism for the state of the fells ahead of us, as yet still hidden by the bulk of the hill we were climbing. The sun was out ahead of us and we were in base layers only thanks to the general warmth and lack of wind. 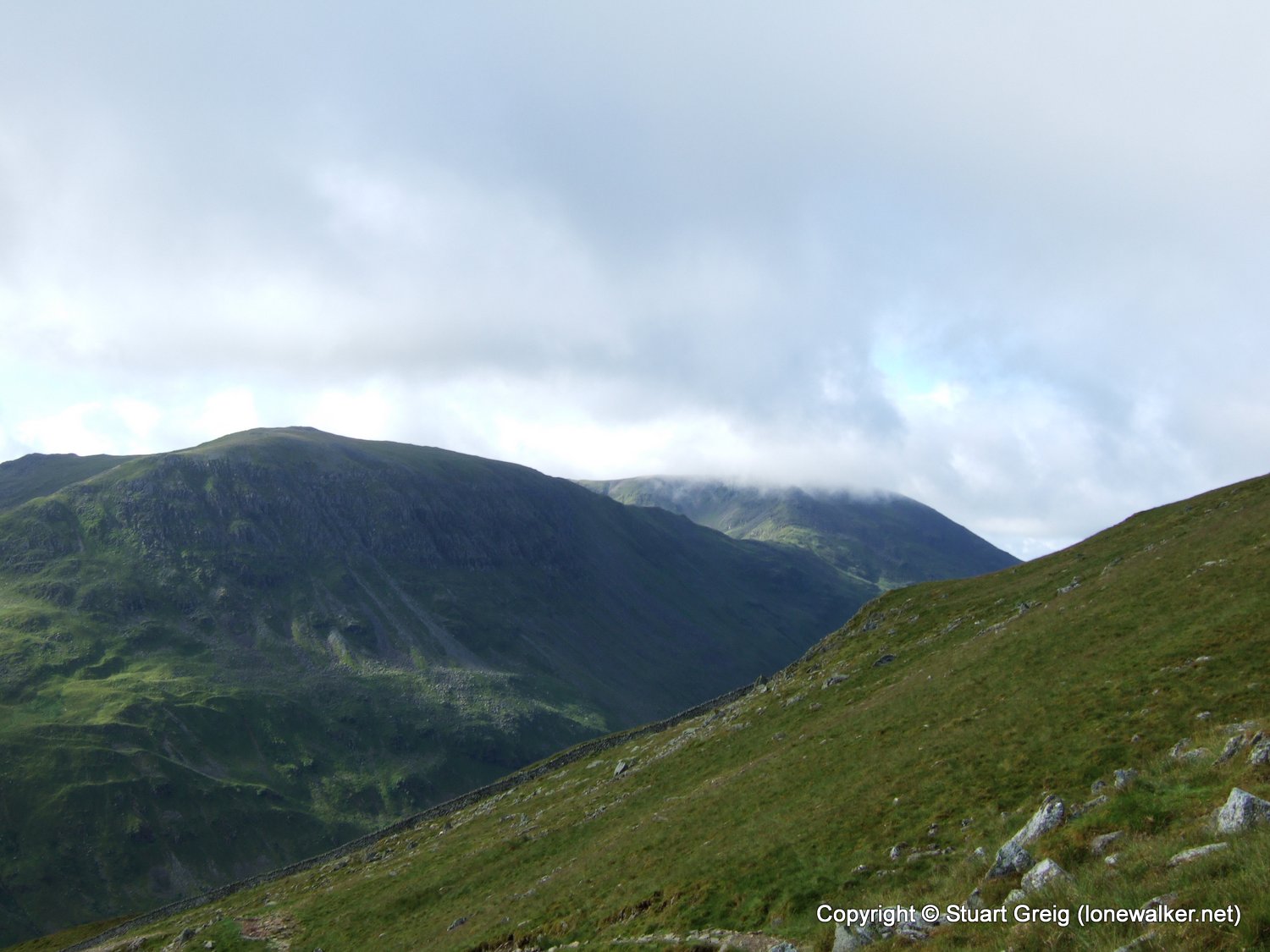 It’s great to get another perspective of a hill. I’d been struggling through thigh deep snow on St. Sunday Crag only a dozen or so weeks ago and now it was green and lush from this view. A thin cloud was still clinging to Fairfield. 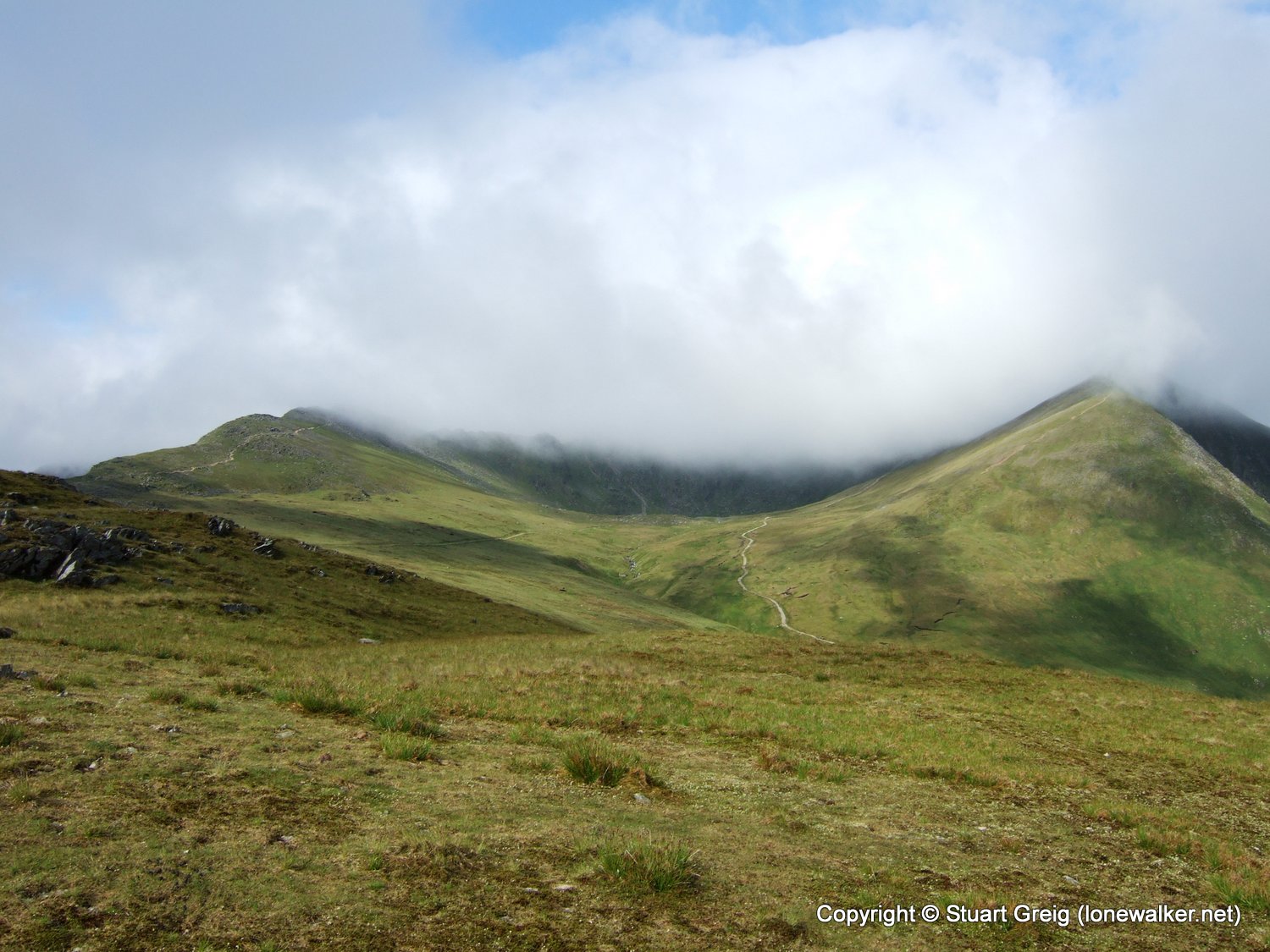 The Helvellyn range still under cloud

As we came upon Birkhouse Moor we could see the Helvellyn range ahead of us and our hearts sank as we could see it was completely covered in cloud. Nearly the whole of Striding Edge was also under the cloud and that meant we would be walking in cotton wool, along one of the finest ridges in the Lakes; with no views and no real feeling for the exposure along the ridge. 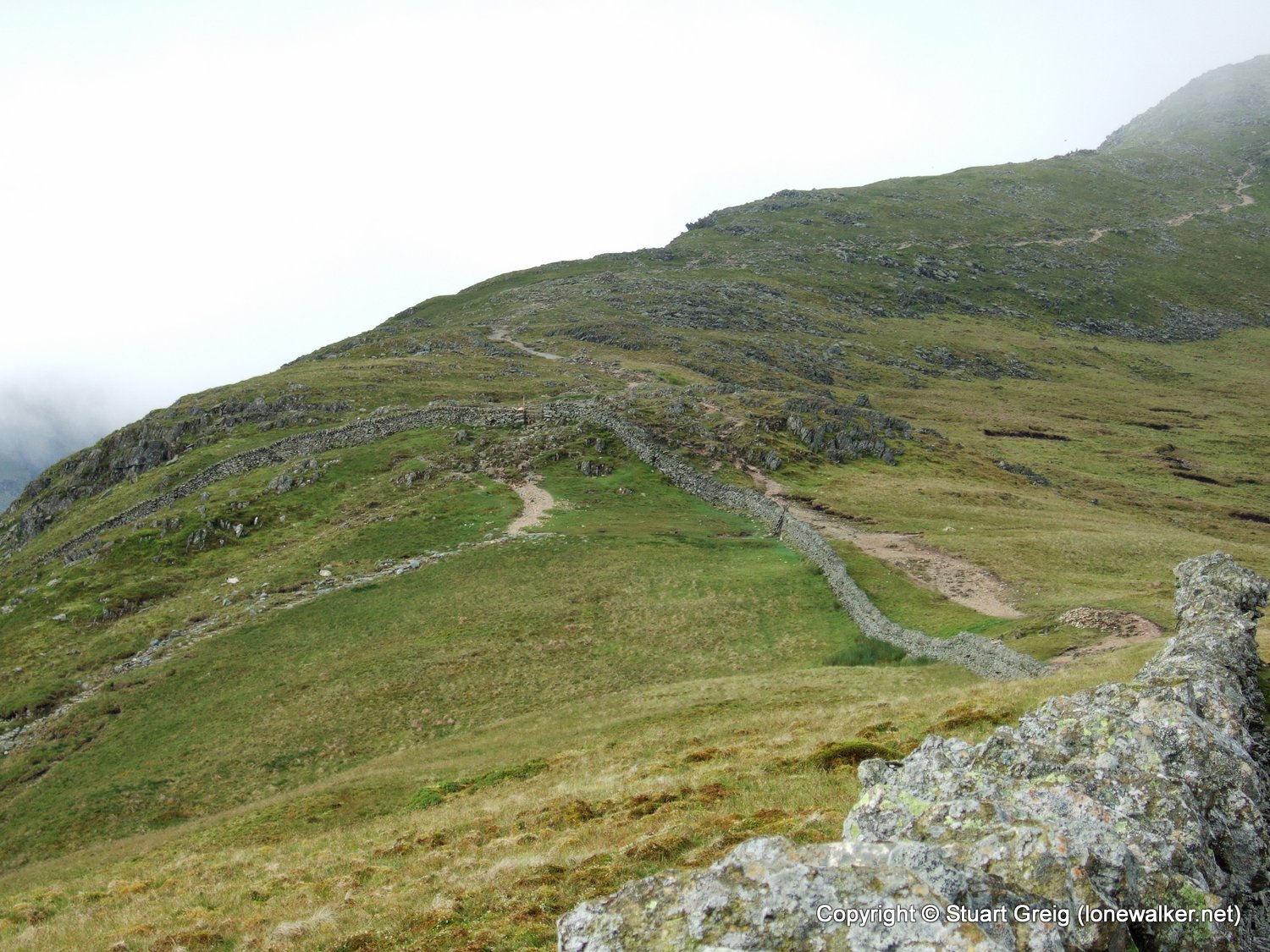 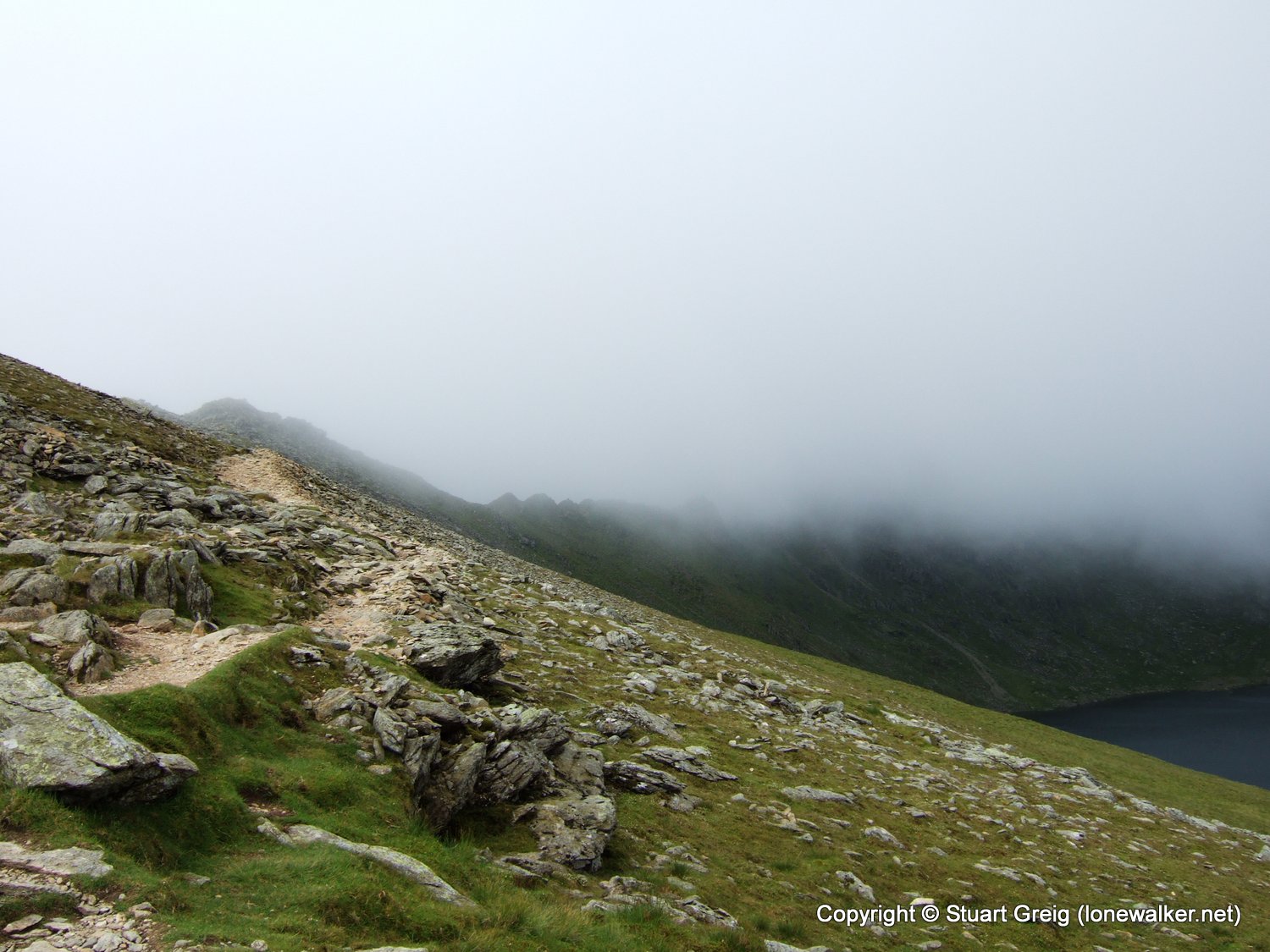 Striding Edge disappears into the cloud

We convinced ourselves that the cloud was lifting slowly ahead of us as we ascended the ridge slowly. So far we’d not seen another living soul outside of Glenridding, but we now spied a small figure on the far side of Red Tarn, climbing the path up to Catstye Cam. He seemed to be watching our progress as we joined the path at the start of Striding Edge. 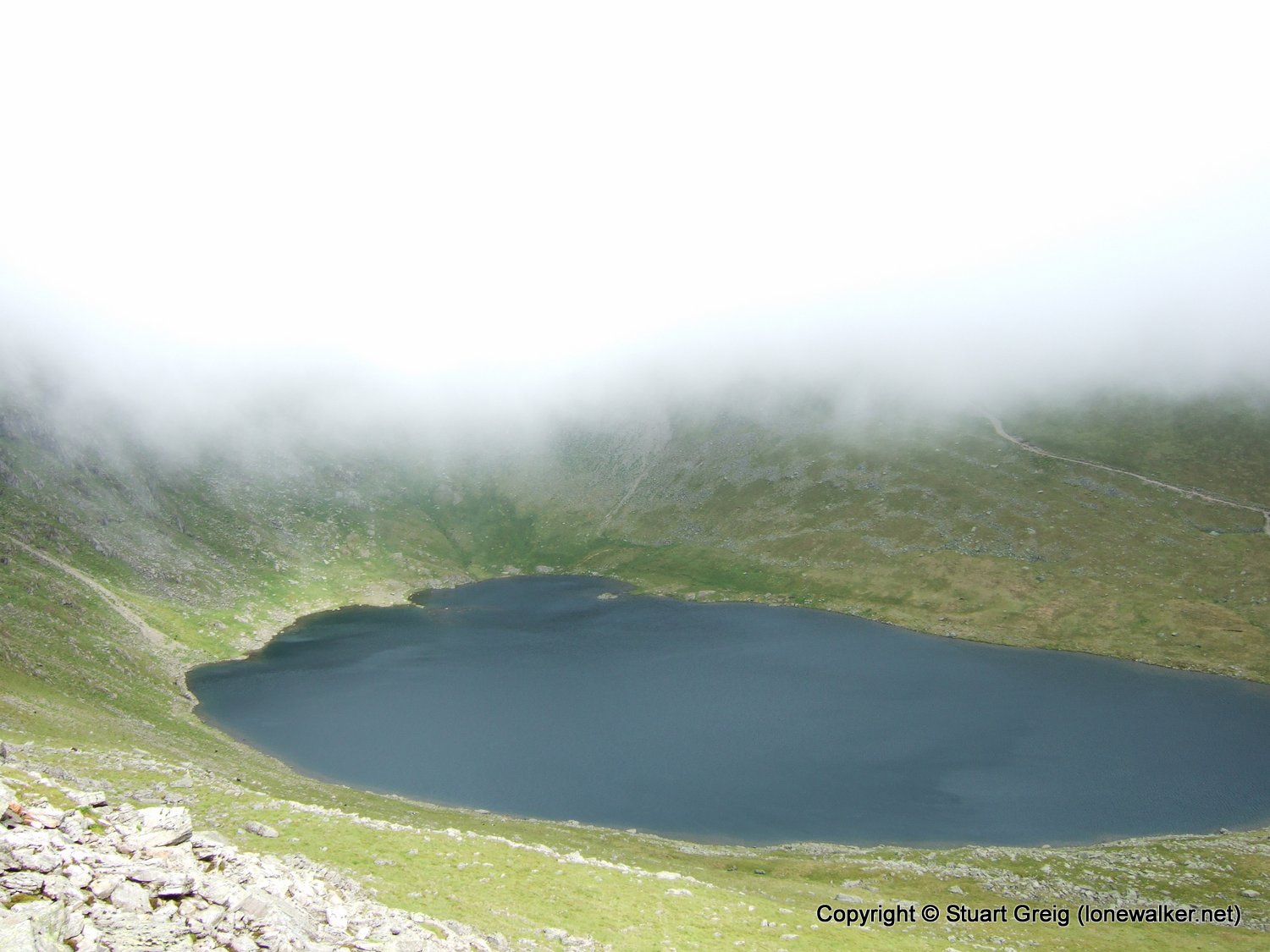 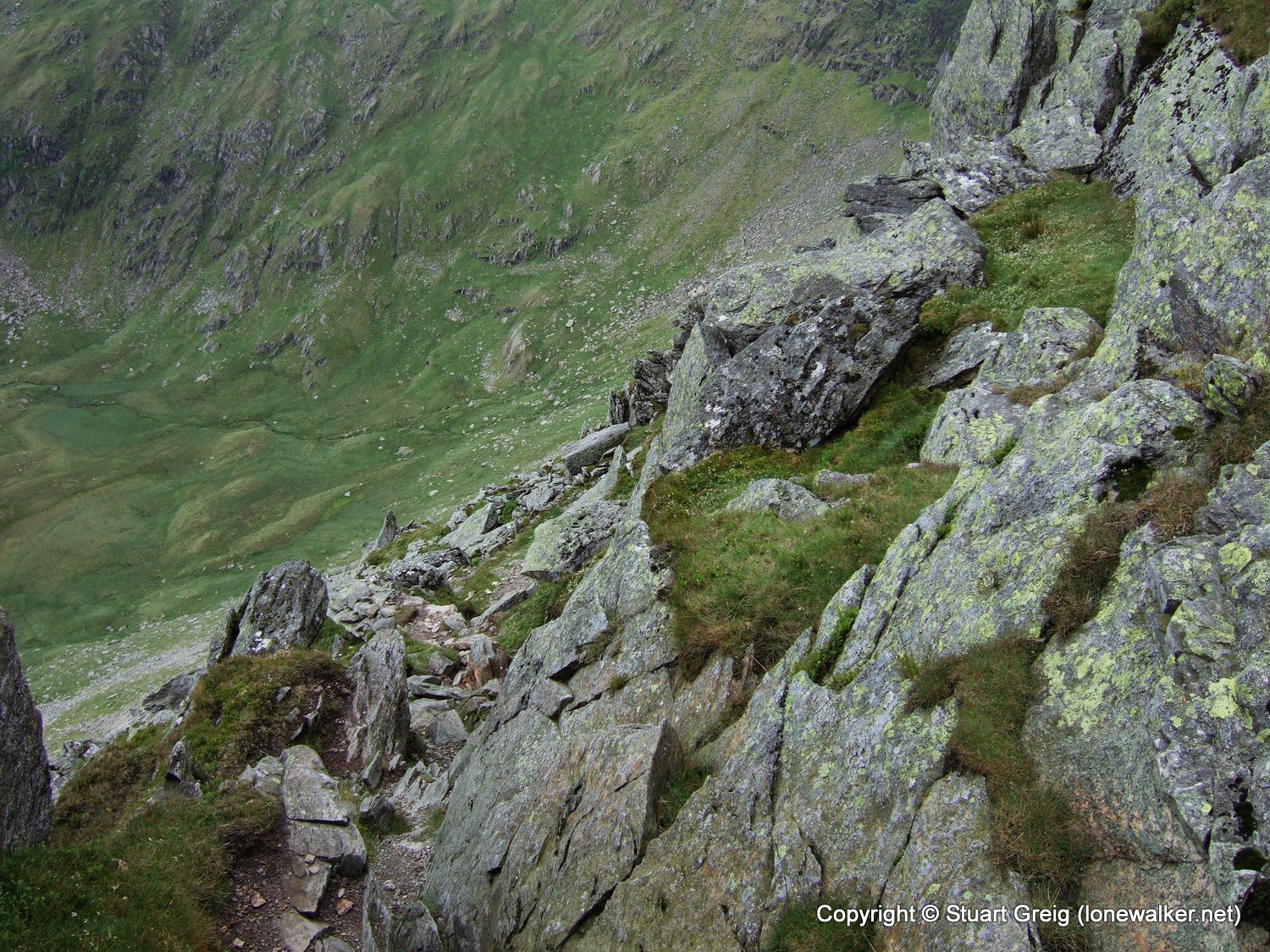 The lower path around High Spying How, Striding Edge

There is an easy route along Striding Edge and a much more exposed route. The former is for those of a fear of heights or exposed places (what the hell are they doing on this path?) and also I guess for when the weather has turned foul and there is a real risk of danger on the exposed route. This route runs about 10 feet or so below the ridge line and is generally sheltered from the wind and could be used in almost any weather conditions, with care.

We were not here to take the easy route though. We wanted to walk the exposed upper path, which goes over the Spying How’s rather than dropping down around them as the easy path does. This is a fine exposed ridge walk and the higher route displays the scars of millions of walkers and thousands of crampon scratch marks. 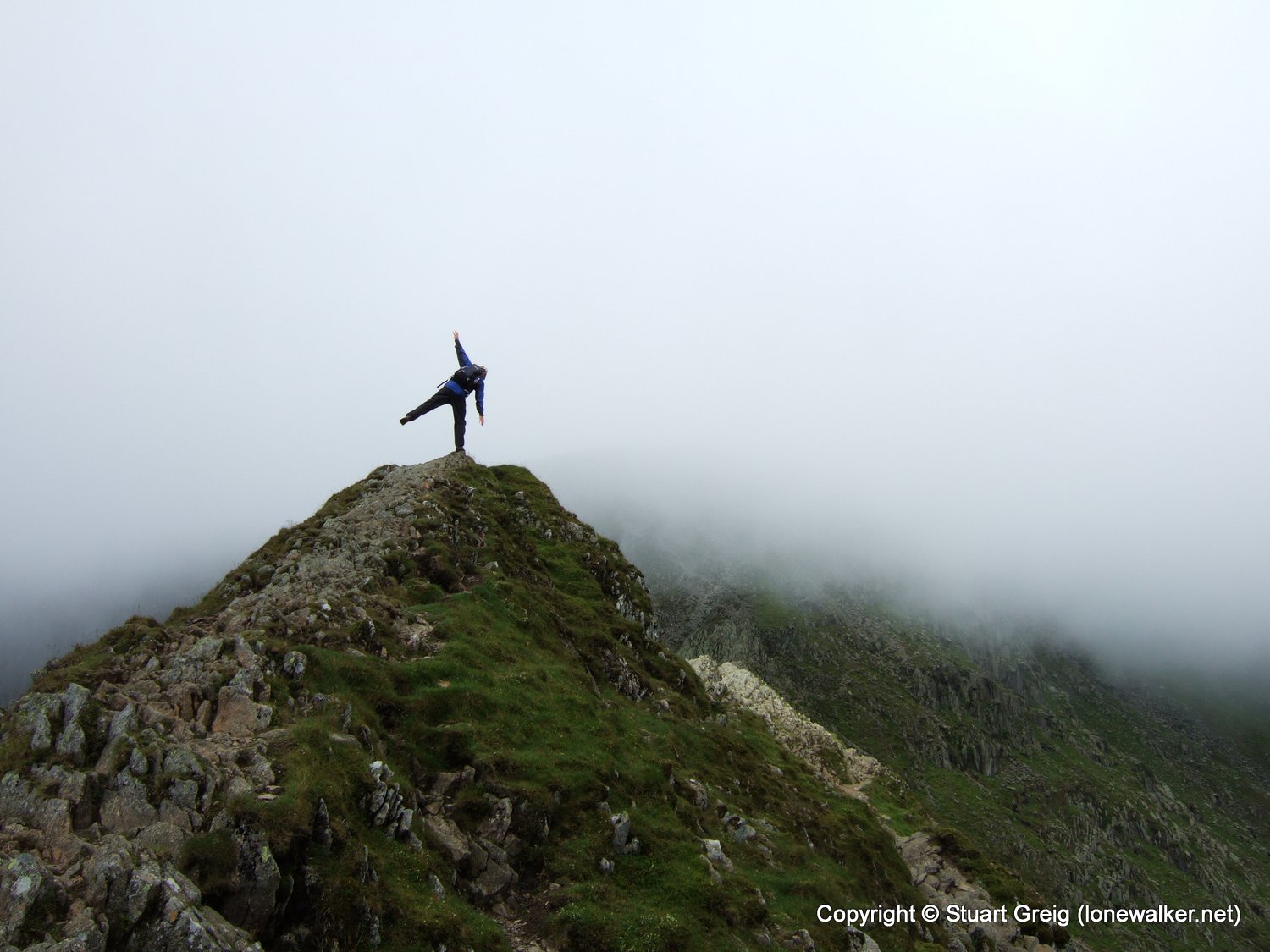 I wonder if they’d erect a memorial to Pete if he fell off?

We spent a long time on the ridge, and indeed the cloud was retreating slowly ahead of us. We could see more and more of the ridge ahead. We cut back and forth taking pictures of each other, a luxury most people won’t have when there’s a queue forming behind you. 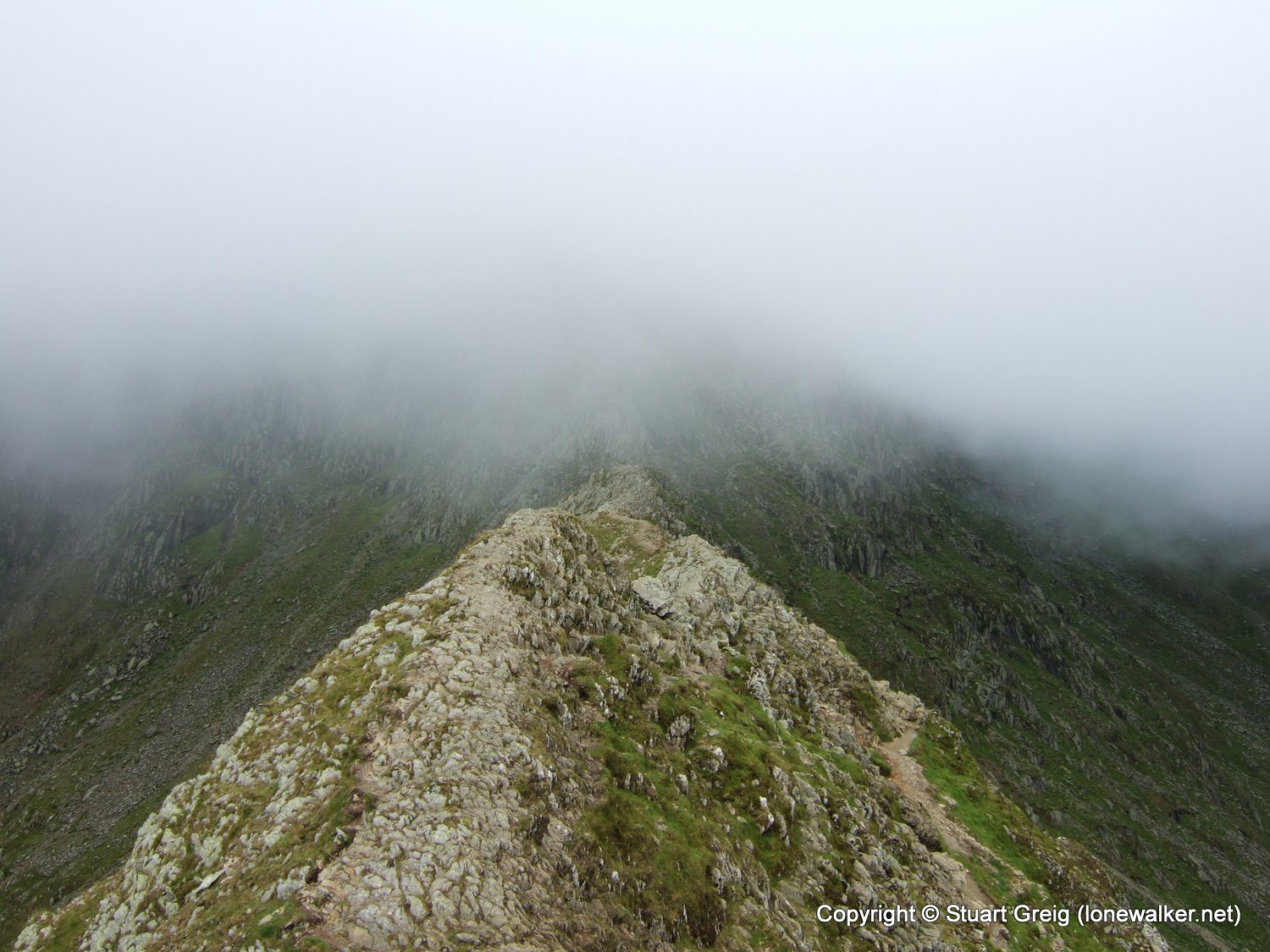 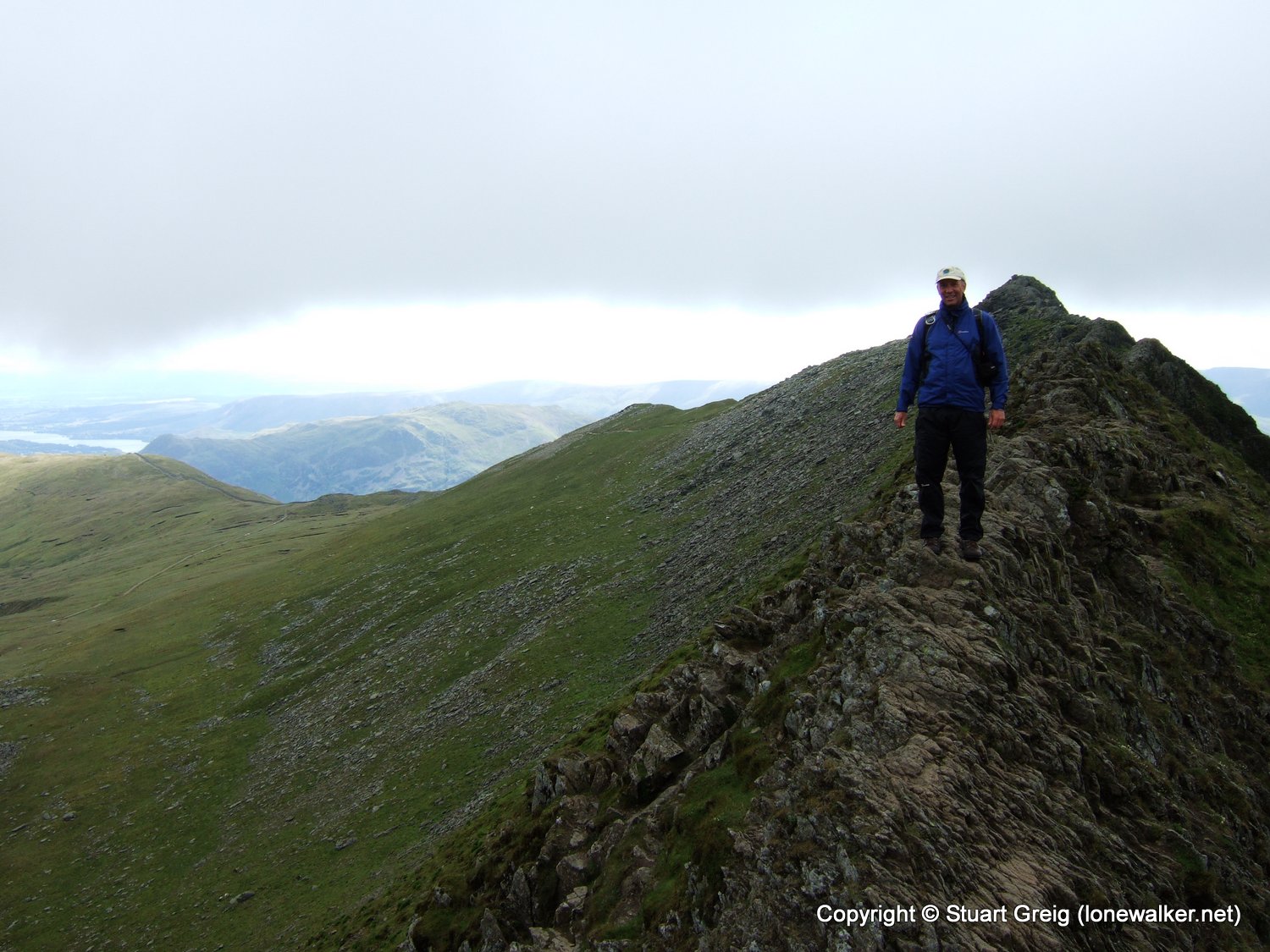 Looking back along Striding Edge 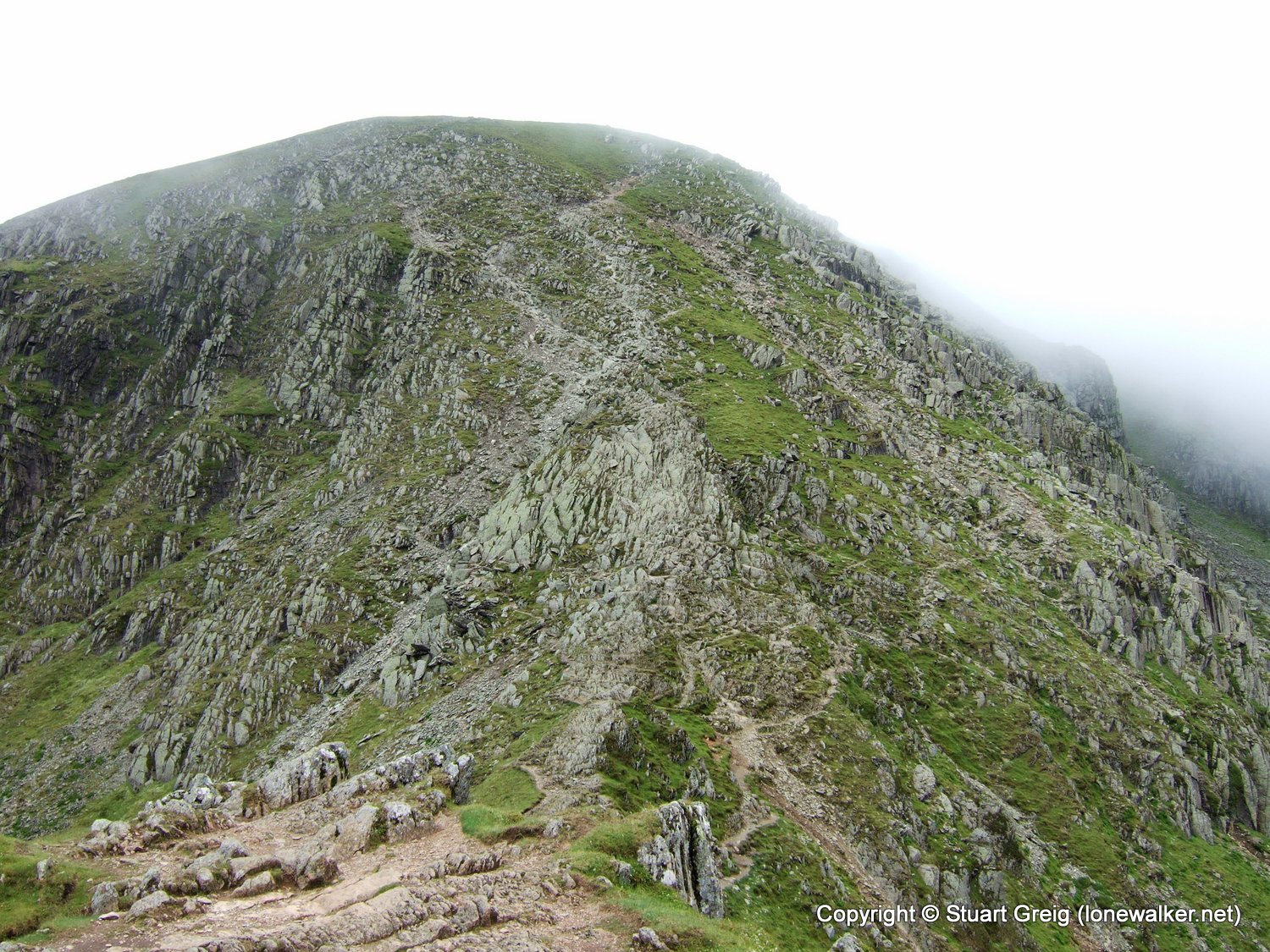 We lingered long enough for the cloud to pretty much clear completely, just leaving a thin layer on the summit plateau, but showing us the way ahead all the way to the top. There is very little incline along Striding Edge itself and we still had several hundred feet to climb before we reached the summit. This section is very steep and in one or two places the footing is loose. I was expecting something much more scree-like though and was pleasantly surprised to find generally good footing up this section. Coming down from Helvellyn to Striding Edge would not be a problem. 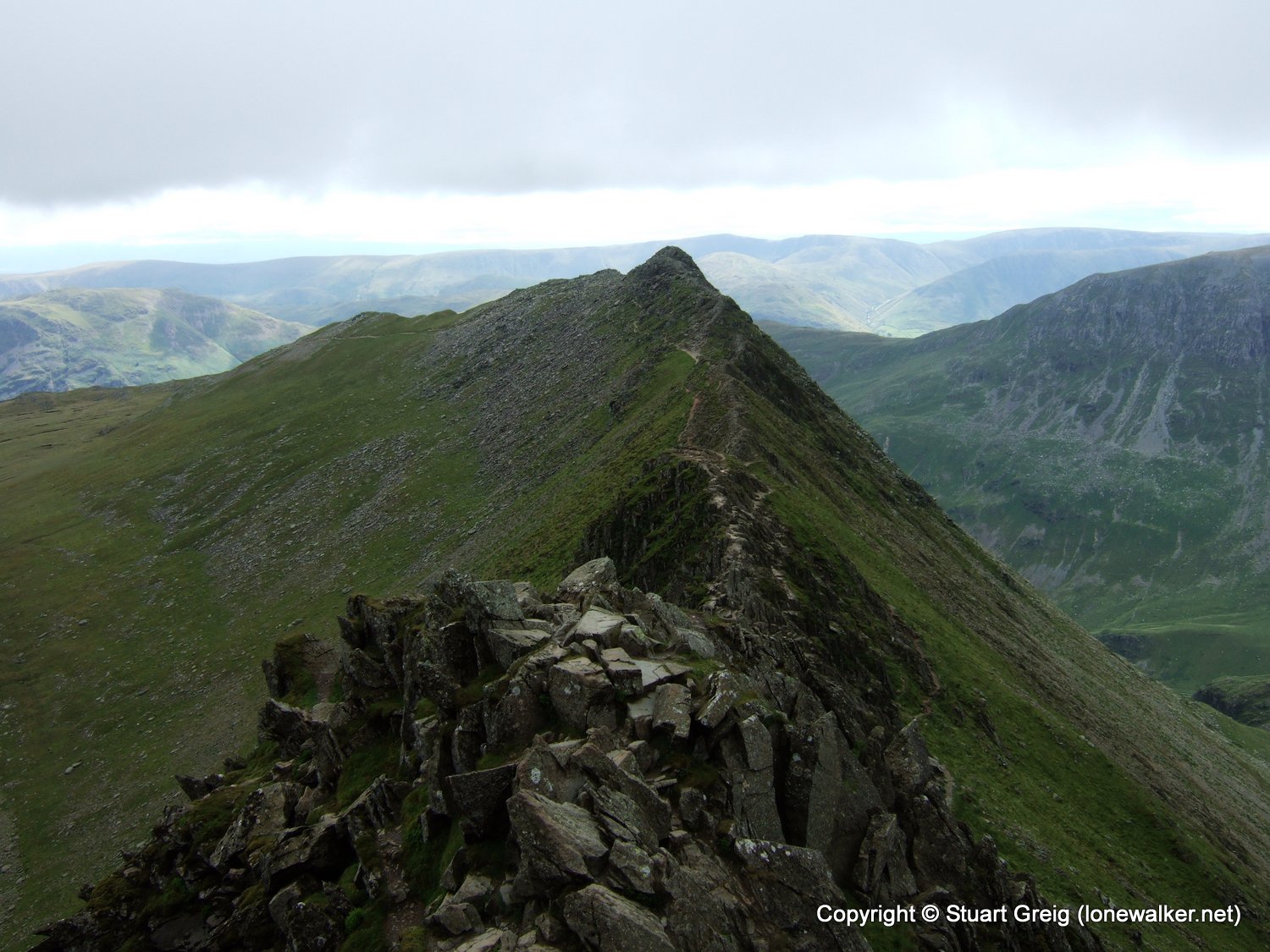 The length of Striding Edge

Finally we had a good shot along the whole length of the ridge, with many of the fells behind clear in the distance. 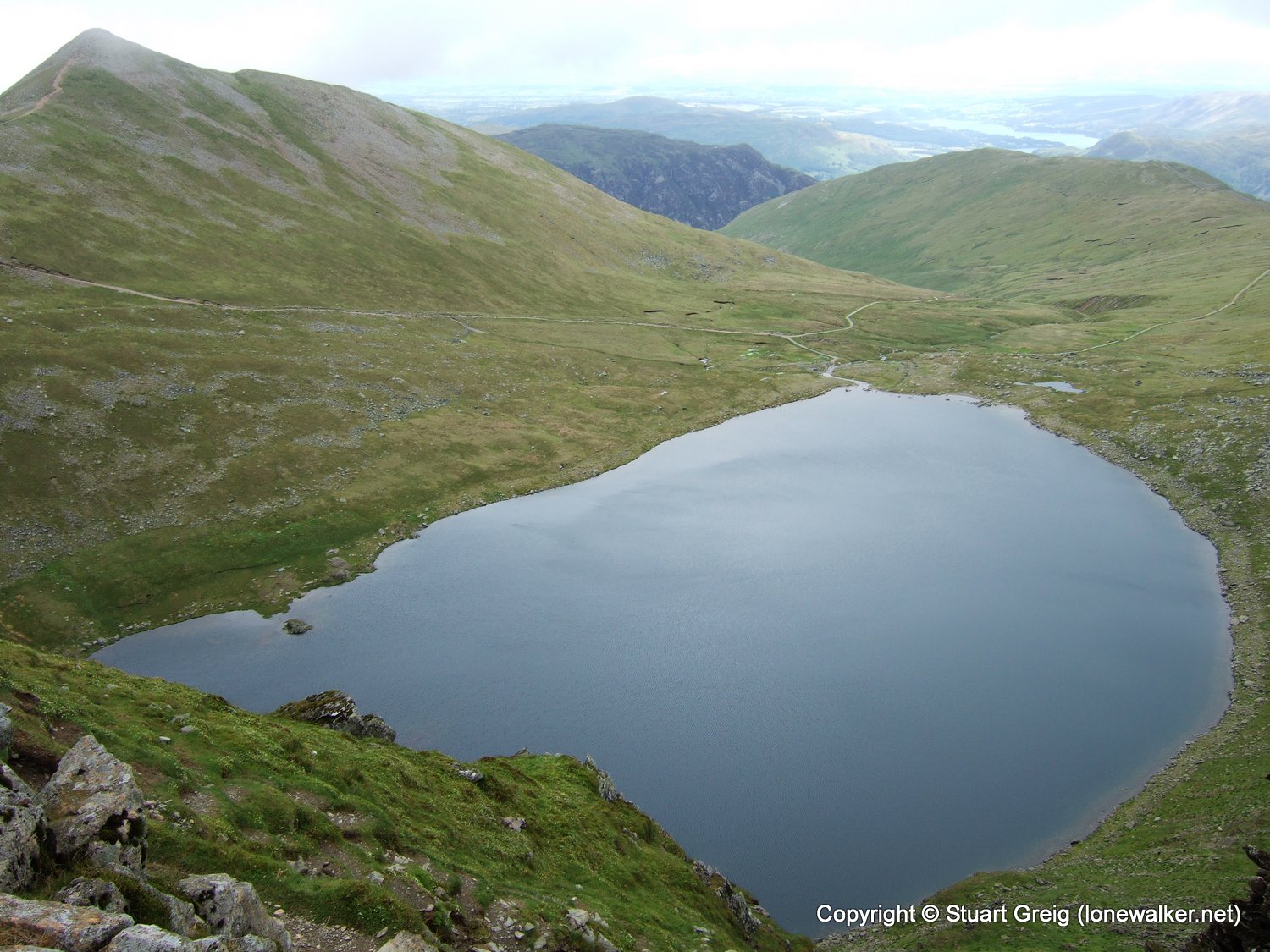 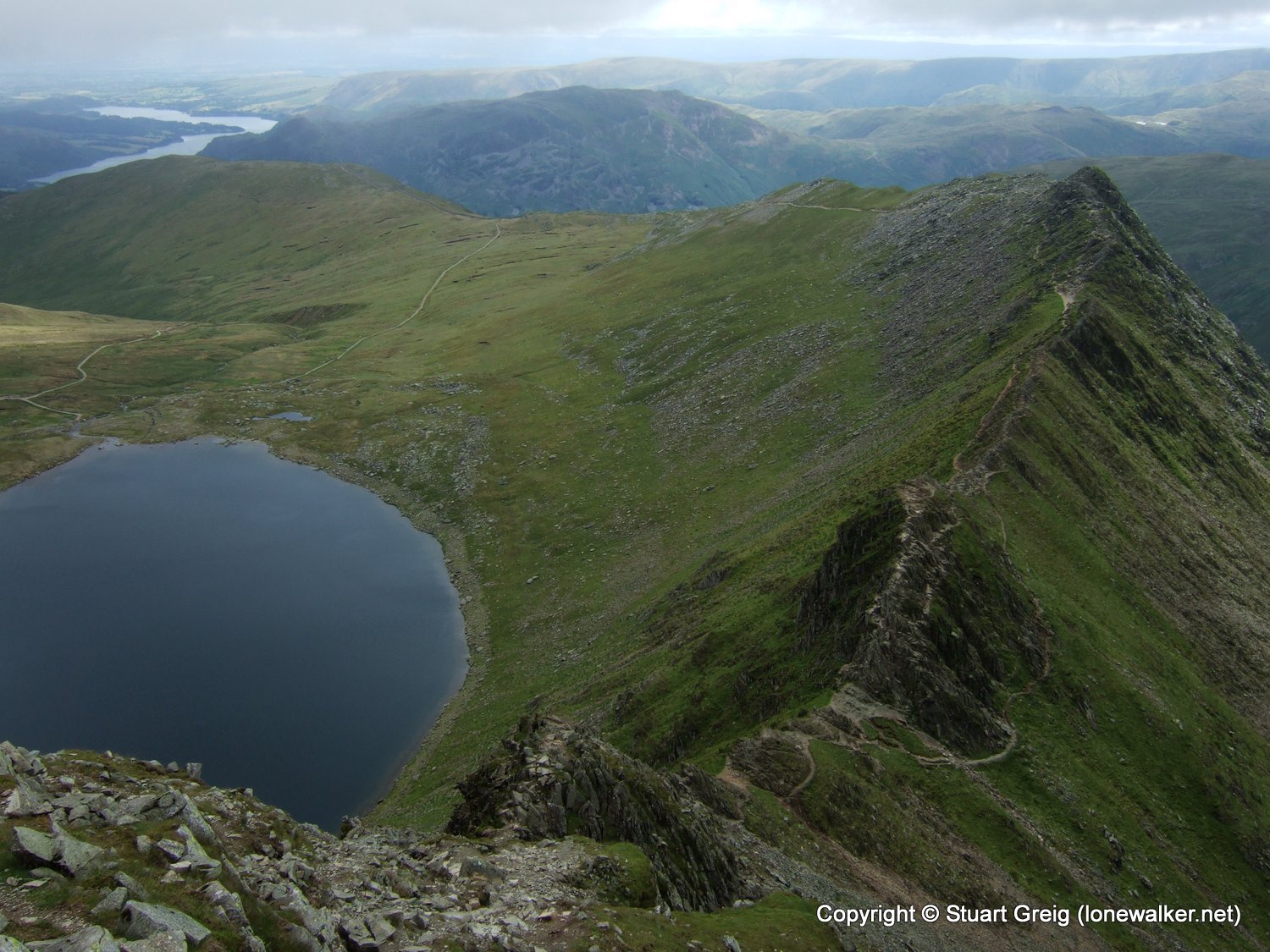 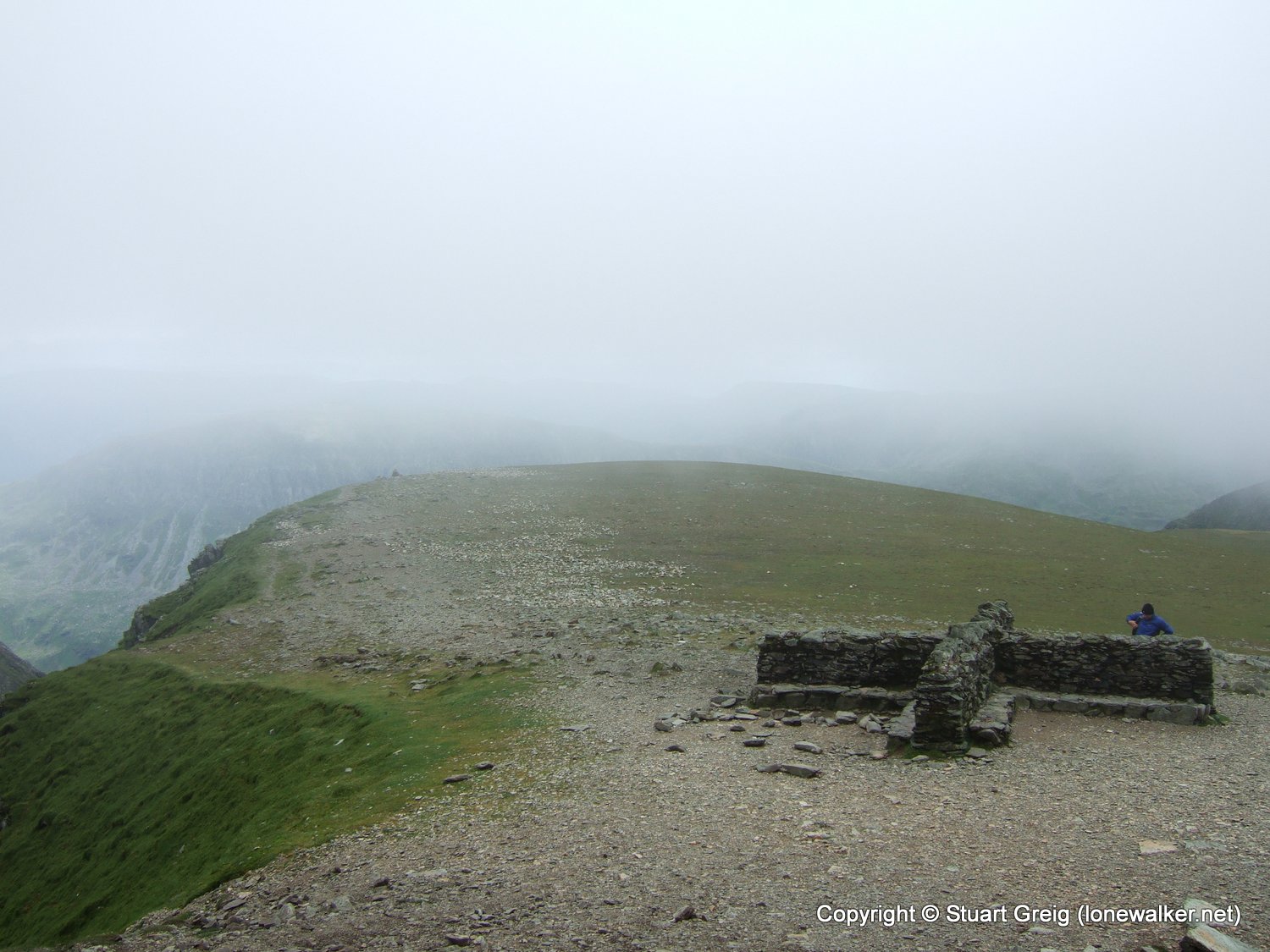 Helvellyn summit from the high point

The summit was surprisingly clear. We met the first walkers of the day. A couple of guys who had ascended from Wythburn and had been watching our progress along the ridge. One guy said he thought he had a picture of us coming along the ridge and I asked him if he would send it to me. Unfortunately it turned out that the picture actually had his friend standing in the way and we weren’t visible.

The two guys left to continue their walk and we had the summit to ourselves. Despite a photo to the contrary, I deposited my banana skin in a rubbish bag I’d brought with me specifically for that purpose and we mused over how it came about that two guys landed a plane on the summit plateau here in 1926. We decided it was almost certainly down to a drunken wager, made in the heat of the moment and then dutifully carried out, despite the obvious danger involved. 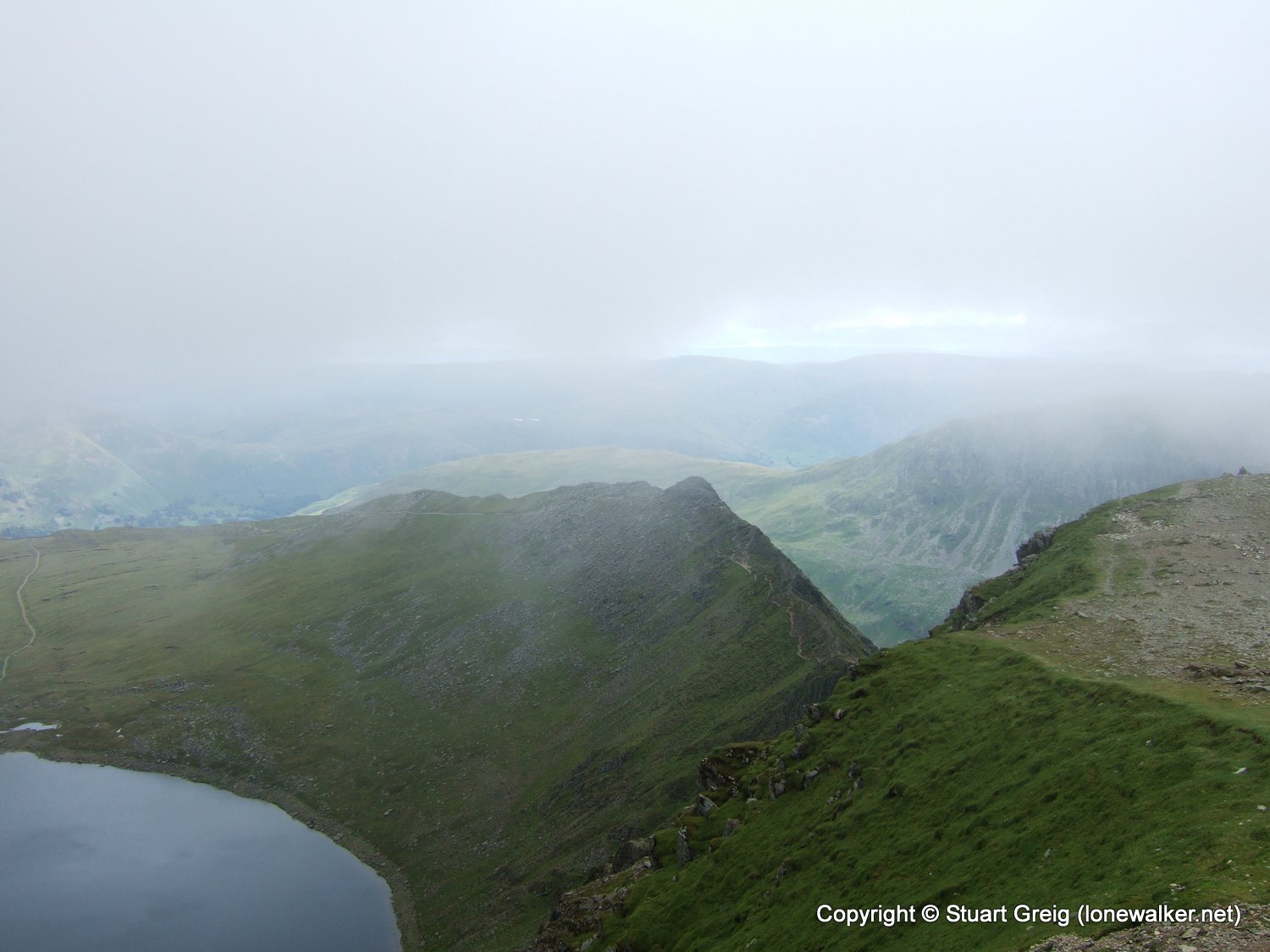 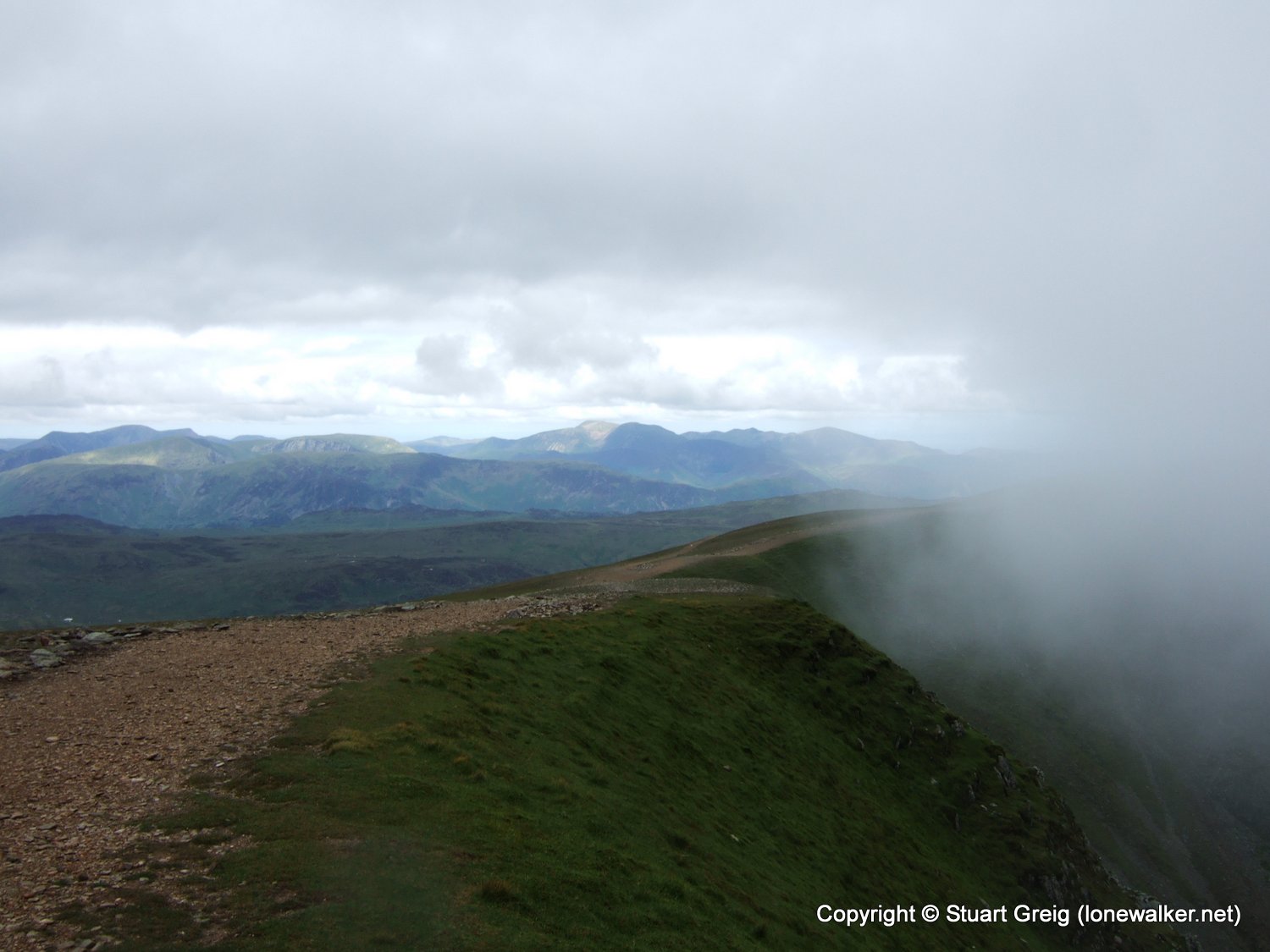 As we left the summit a great hand from above waved away the clouds and the scenery opened up around us. The ragged cloud on Helvellyn must have been the final piece to be blown away, for we could see peaks and fells dappled in sunshine as far as the eye could see.

The next mile or two took us ages. We stopped constantly to goggle at the scenery and our cameras both got a serious workout. (I took 240 photos on this walk, compared to my usual average of about 130) 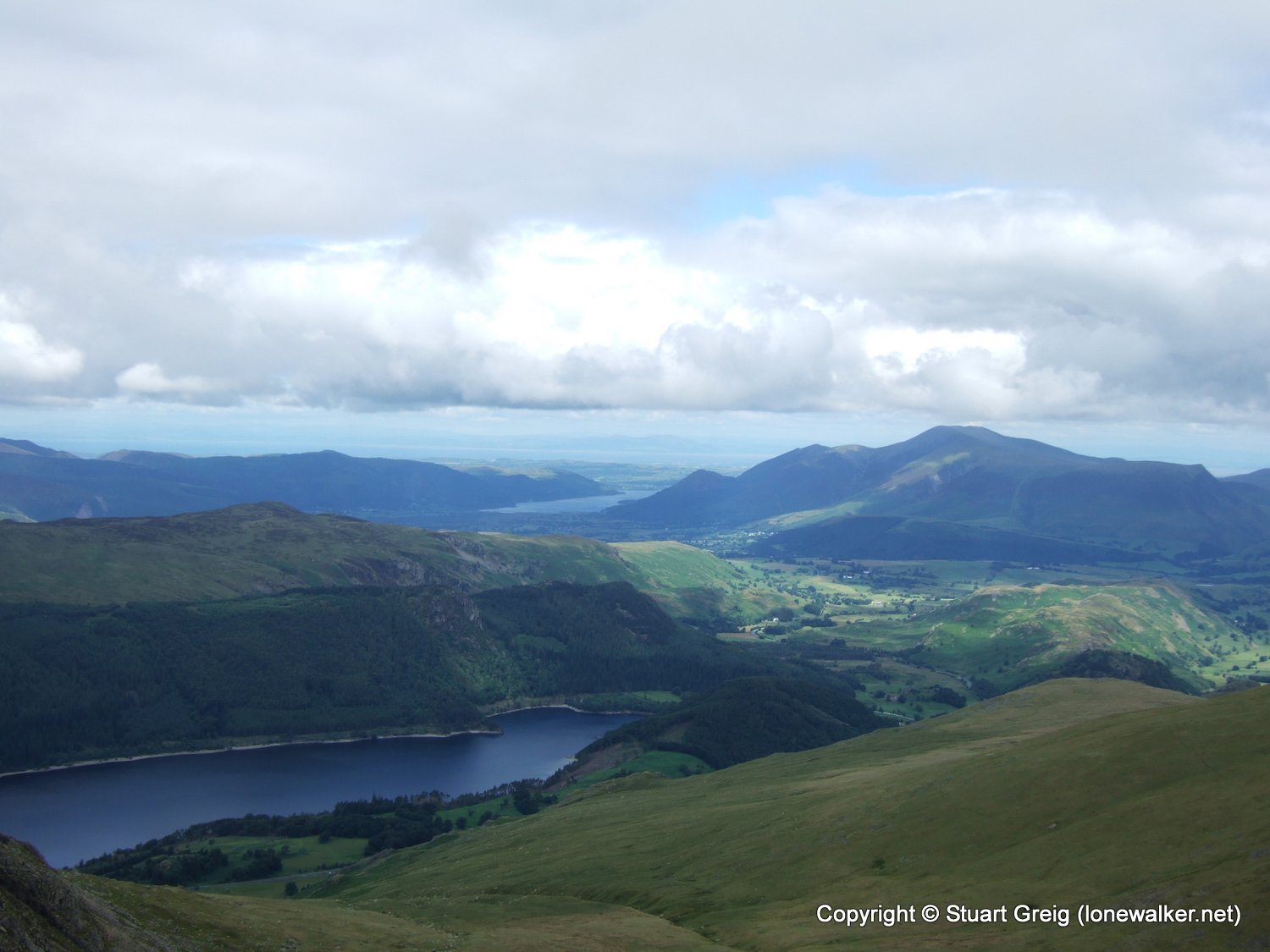 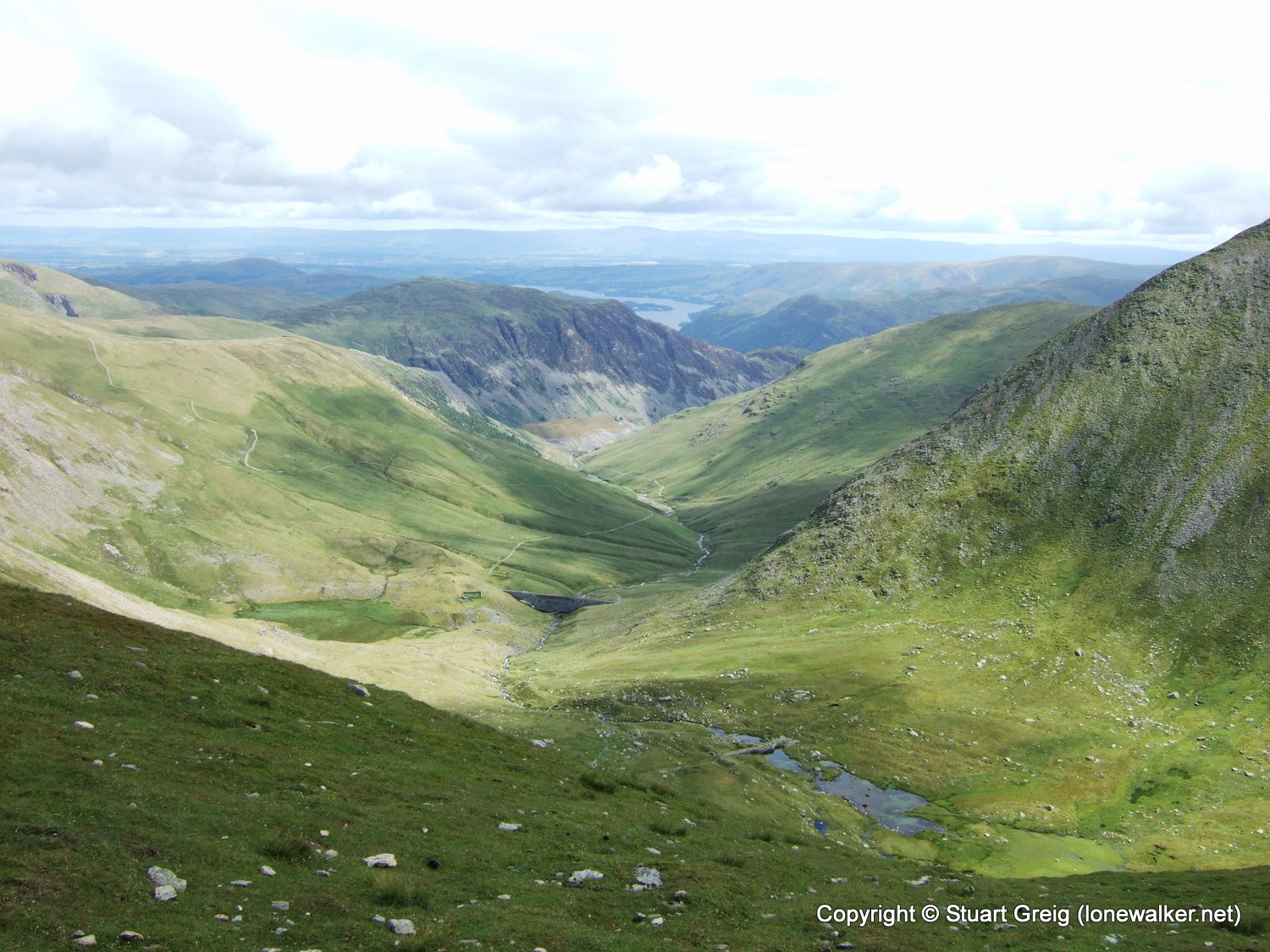 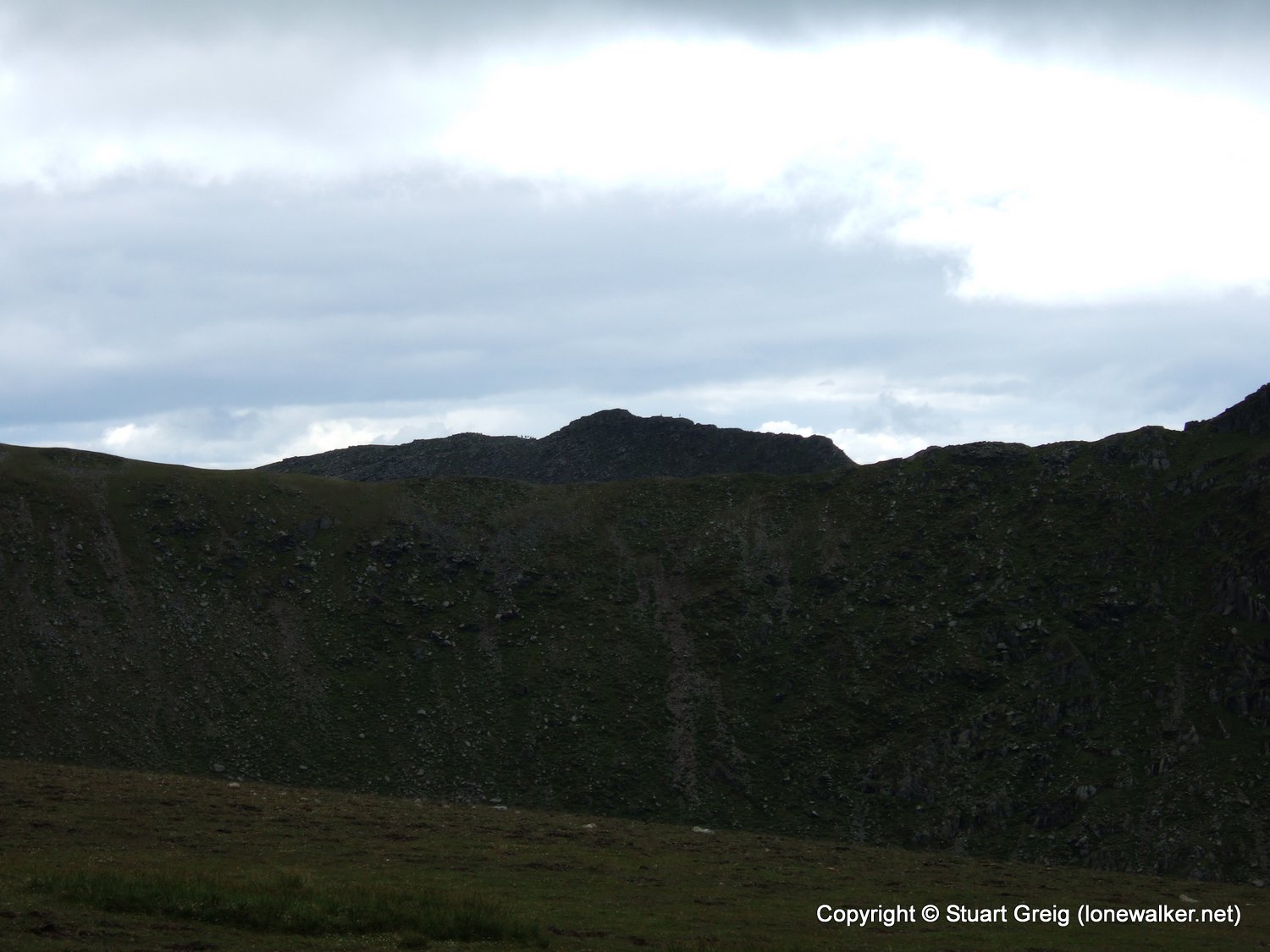 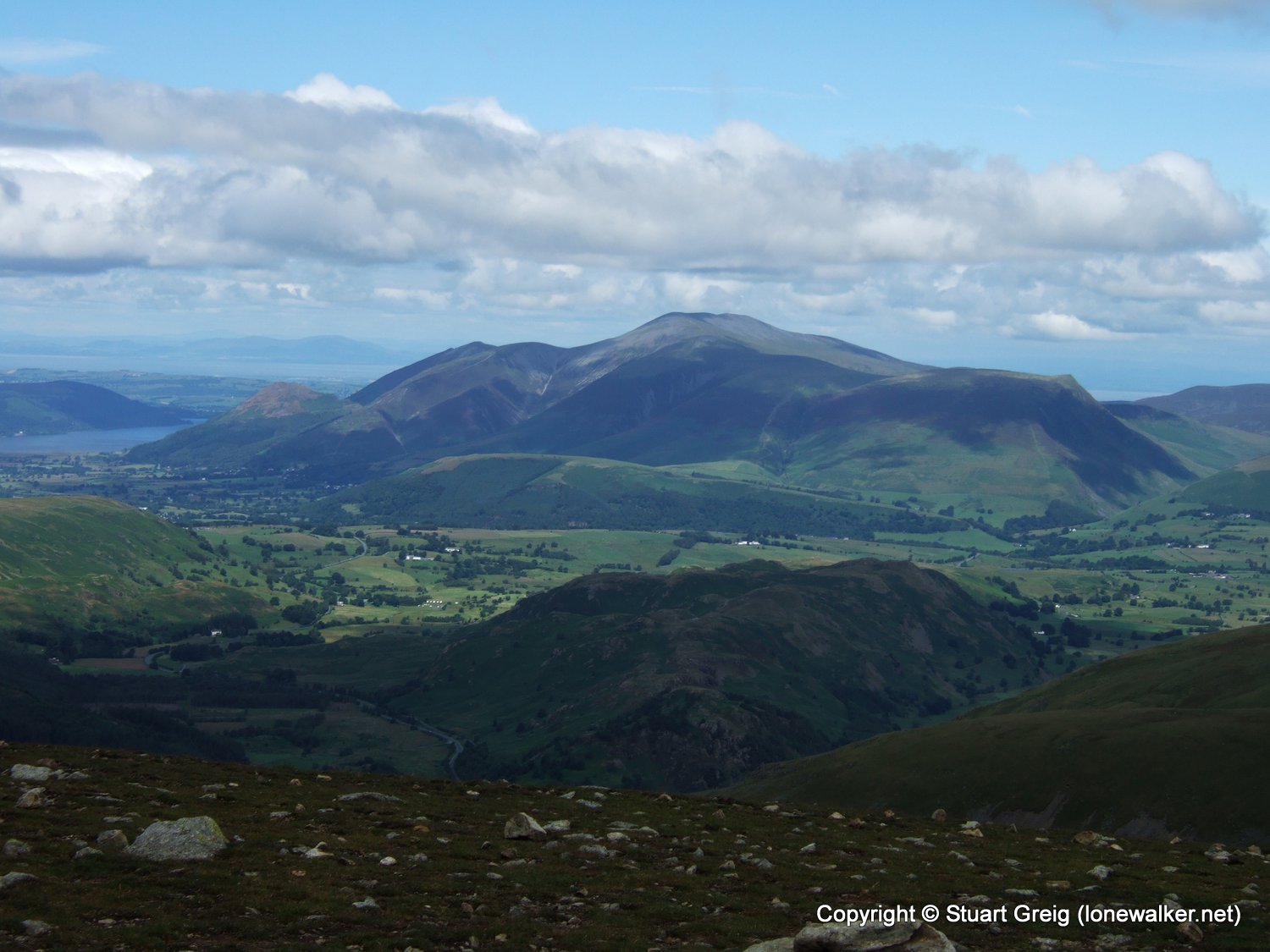 Skiddaw range from White Side

We could see as far as Scotland in the north. Skiddaw was looking awesome in the near distance, almost as if we could reach out and touch it. 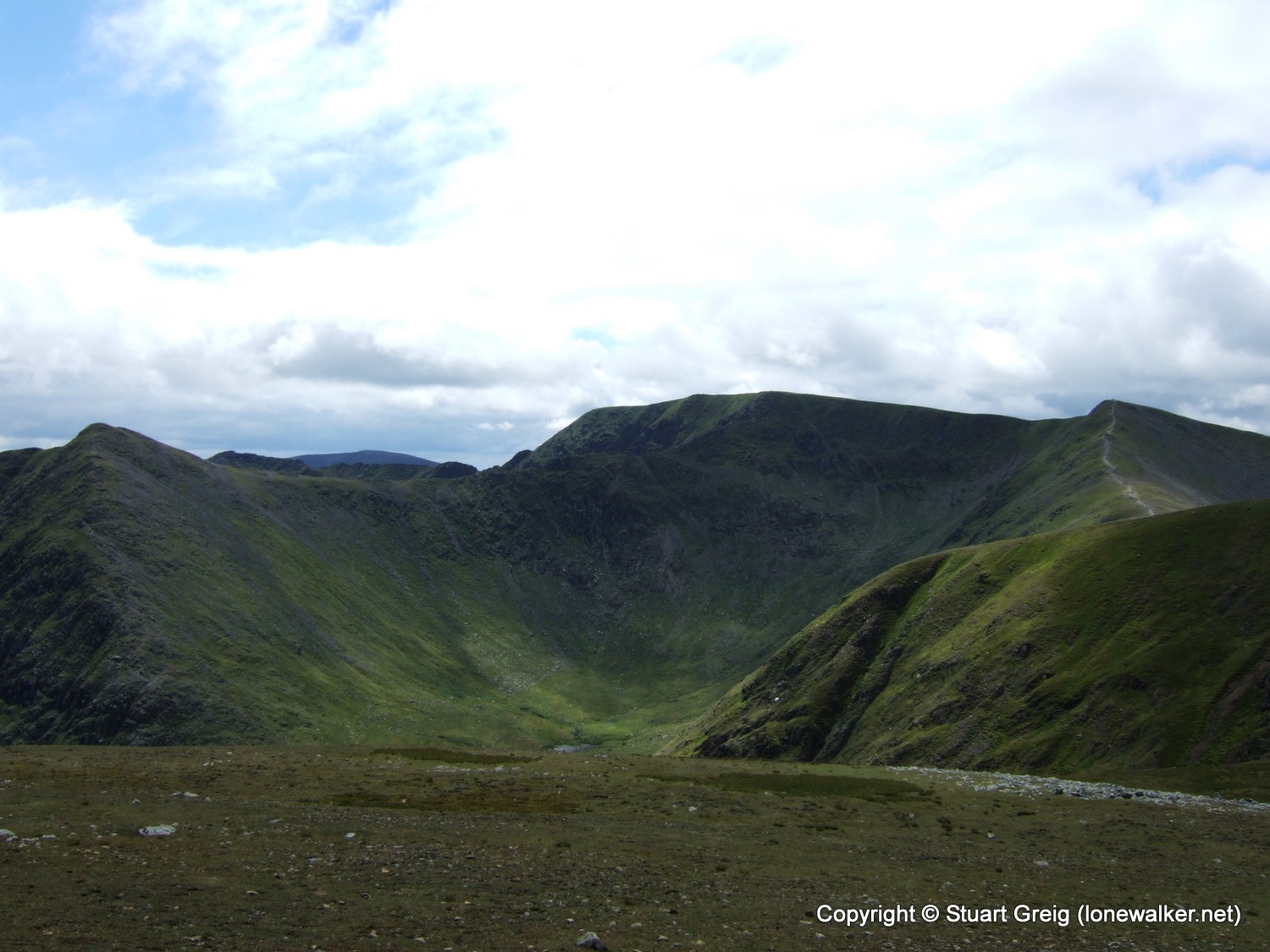 The Helvellyn range from the path to Raise 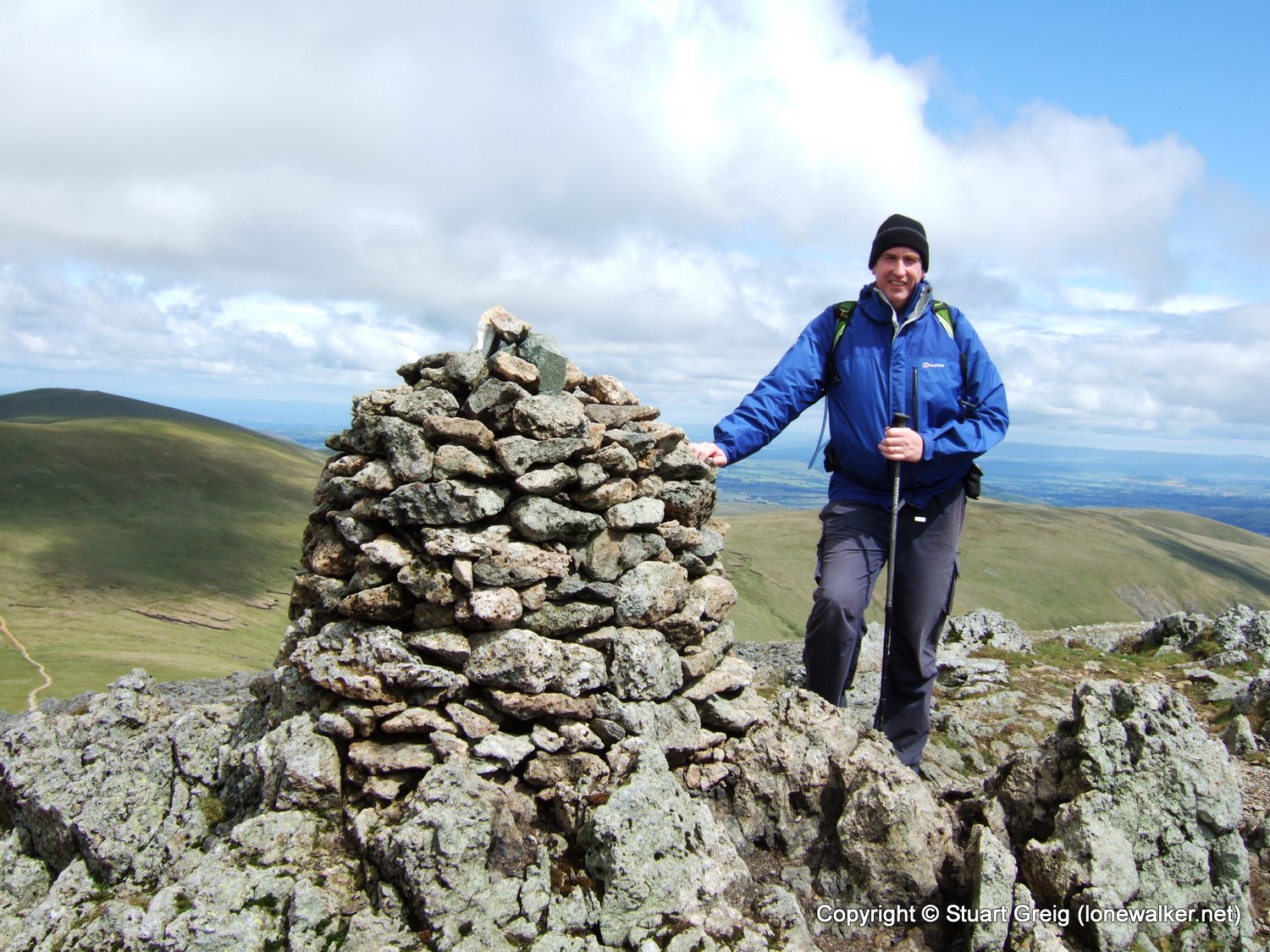 It was still bitterly cold, the wind was quite strong on the top and the temperature, we estimated, must have been close to zero on Helvellyn. Even once the sun came out, the temperature didn’t increase that much, not until we got into the valley. 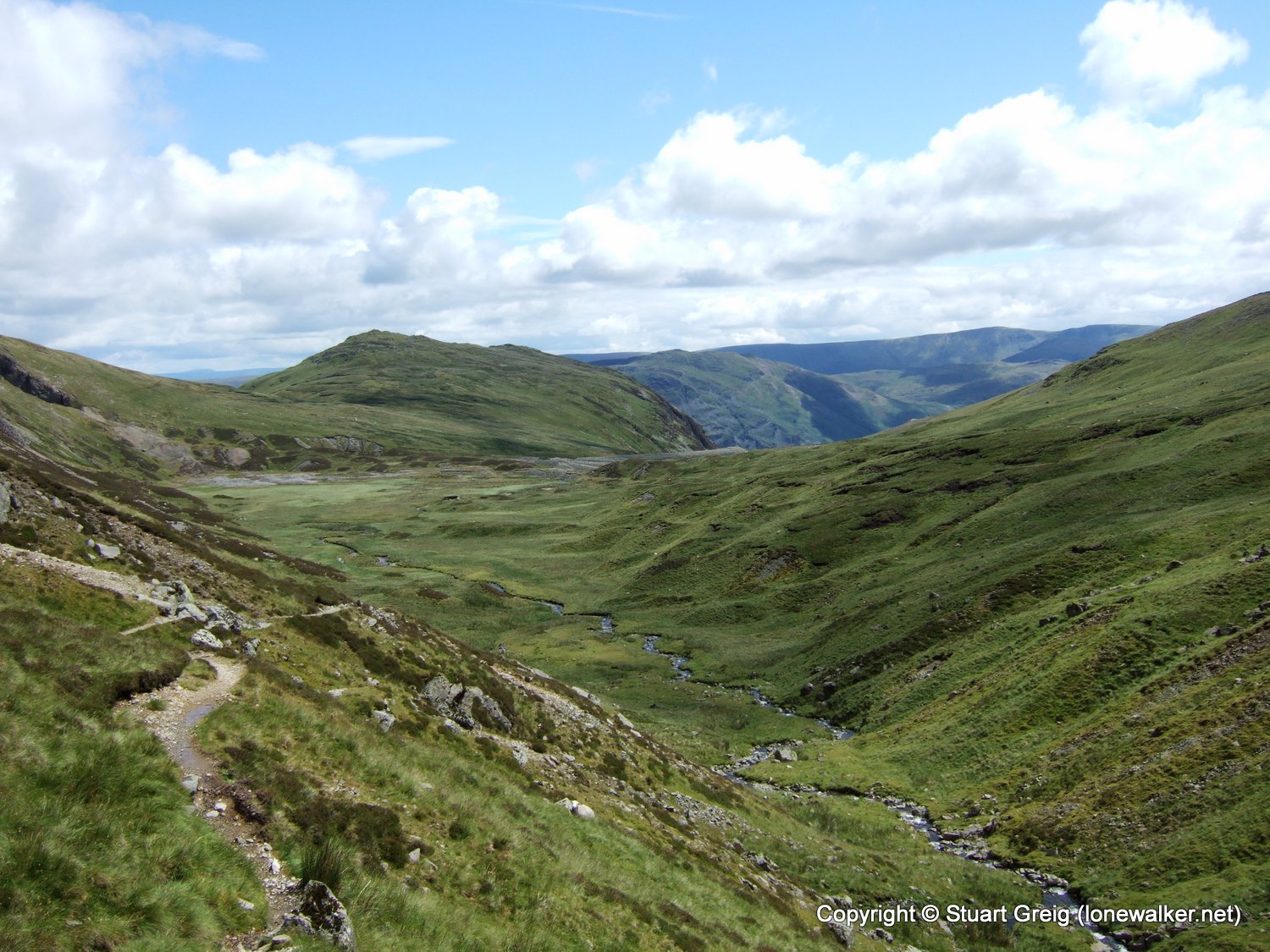 Walking alongside Sticks Gill was a joy. It was now warm and sunny and there was no wind in the shelter of the valley. We stripped back down to base layers and ambled slowly back towards Glenridding. I think unconsciously we both wanted to take our time and enjoy the weather and the scenery. 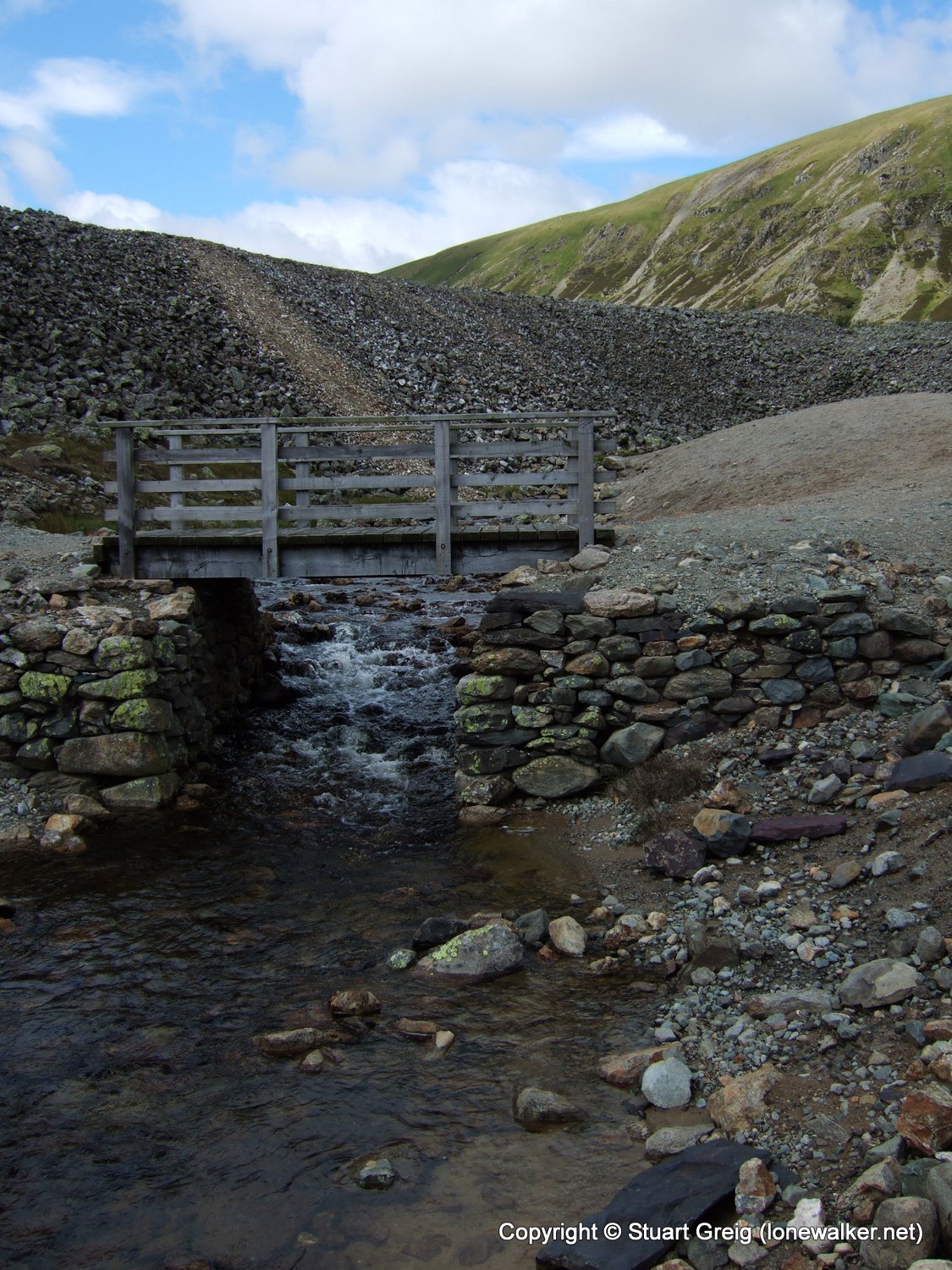 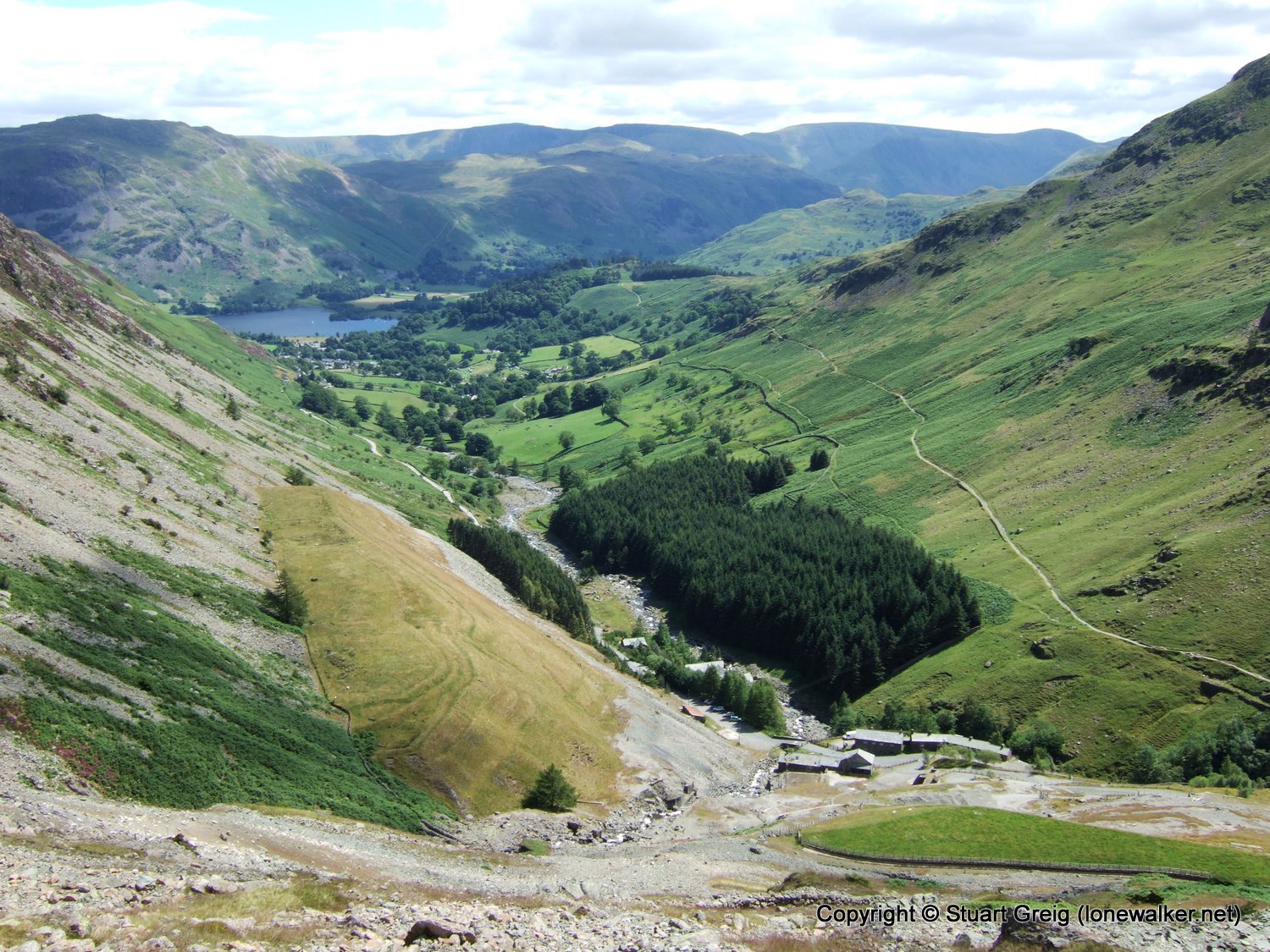 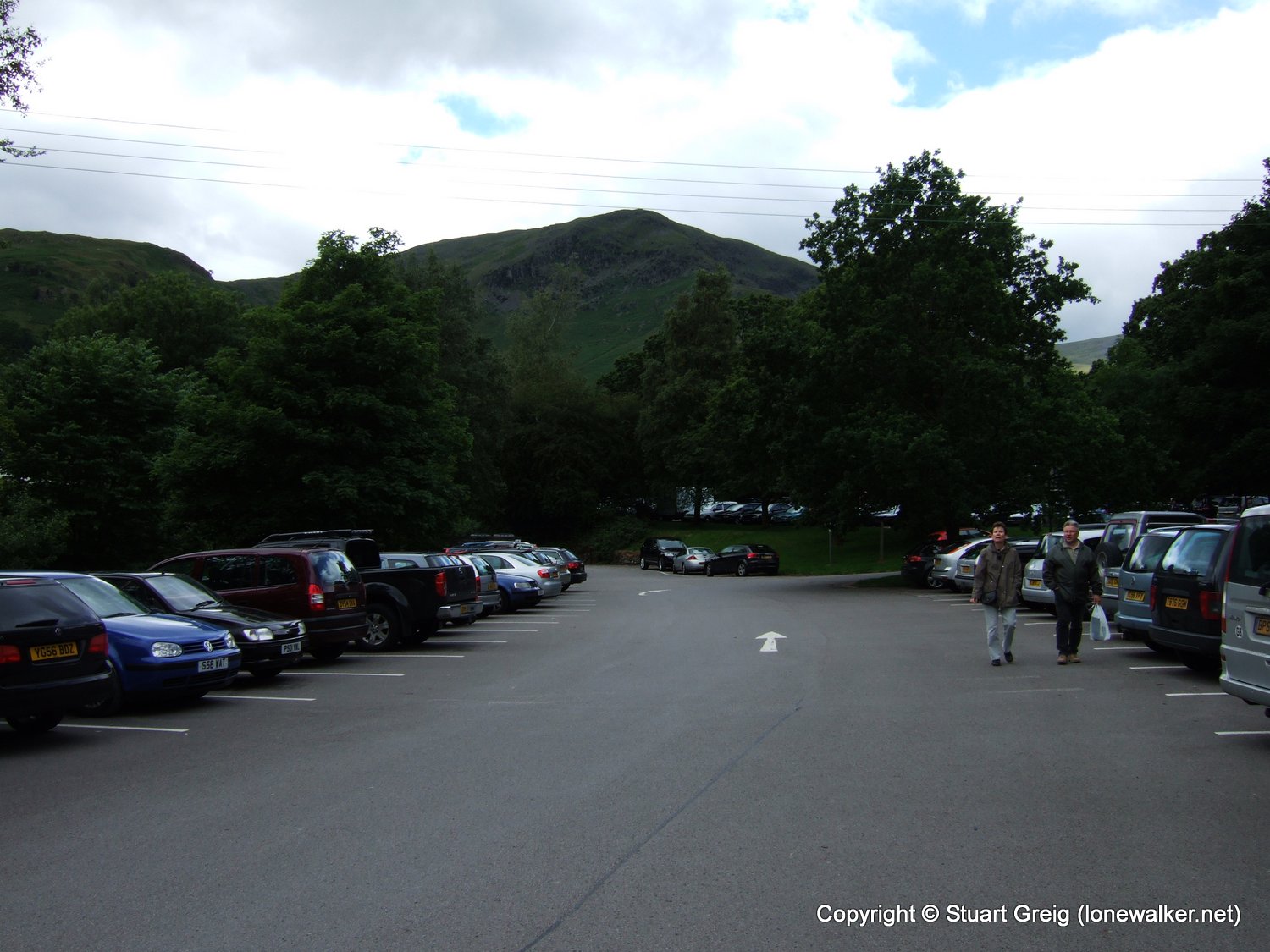 We took 6.5 hours to complete this relatively short circuit of Helvellyn, that’s an average speed of 1.5 miles an hour. Compare that to 2 mph for my recent trip up Ben Lawers and 3 mph for last Saturday’s walk around the Dales and you get some idea of how slowly we must have walked on this trip. We both agreed however, that it was worth slowing down and appreciating the surroundings.

The key to enjoying Striding Edge, I’m sure, is to get there early and avoid the crowds.