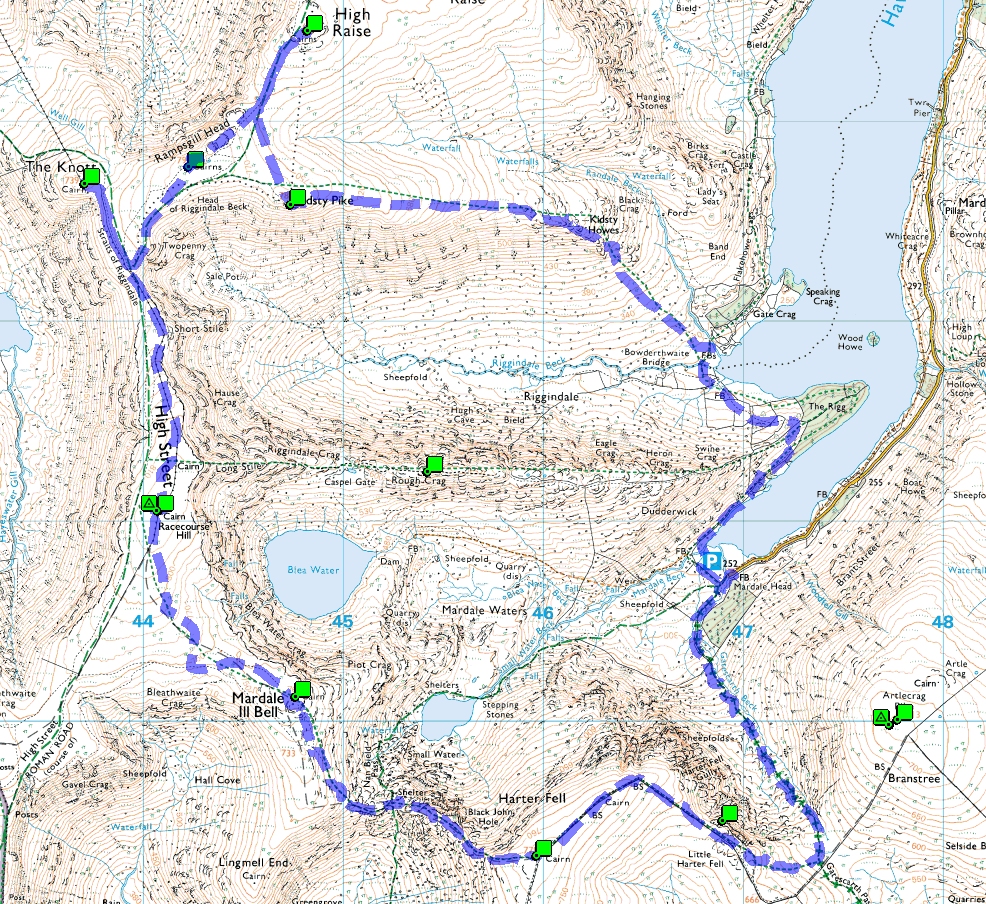 Another glorious weekends was weather predicted, so I decided to head off to the Lakes again, three weeks on the run now and I’ve had great walking too. This week I picked something a little higher and a little longer, to test my new hill legs. I’d chosen a route which again picked out a couple of hills I’d done the previous year on the Coast to Coast, almost to the day as it turned out.

I parked in the little car park at the end of the Haweswater road, probably big enough for about 10 cars and when I arrived at 07:15am, I was mighty surprised to find three cars there already. My plan was to head up Gatesgarth Pass, turning right along the Harter Fell / Mardale ridge, along High Street, down to Rampsgill Head, out to High Raise and then back to Kidsty Pike and down to the car park again. 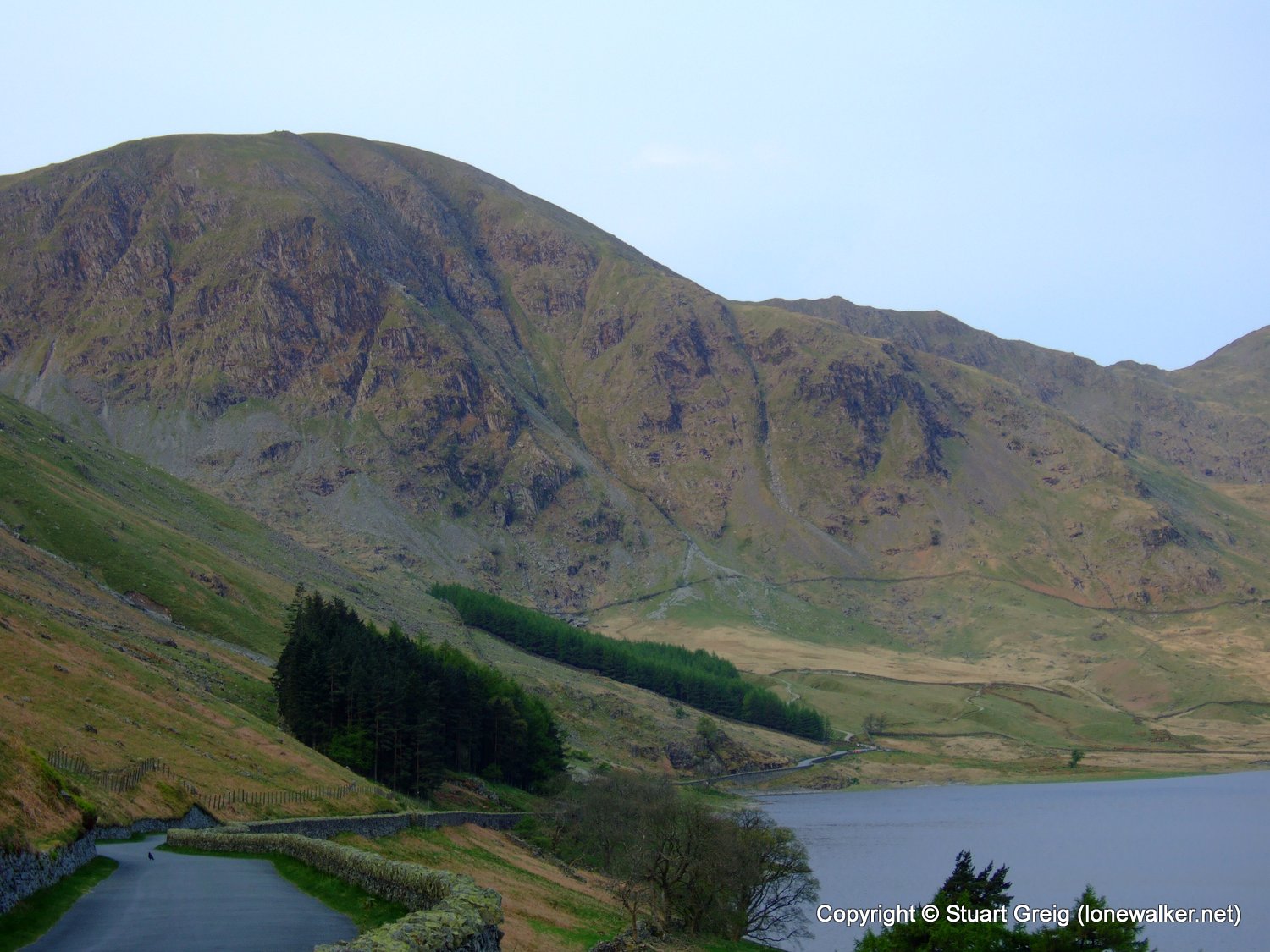 Harter Fell from the road into Mardale Head 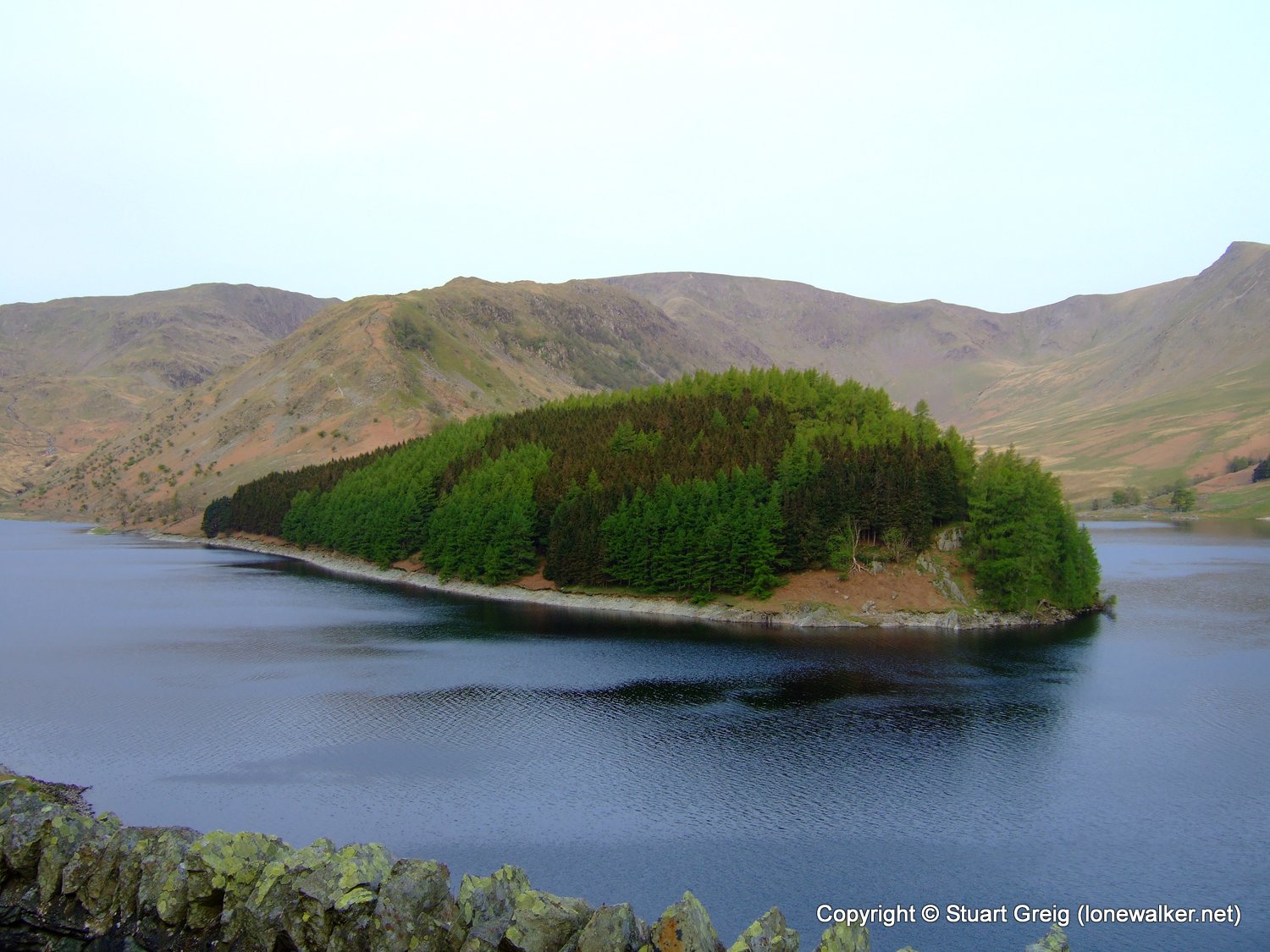 The Rigg from the road into Mardale Head

Not sure I mentioned them last week, but I experimented with my trail shoes around the Langdale Pikes, instead of my usual 3 season Scarpa’s and what a revelation! I felt nimbler and much more agile in the trail shoes, ascents were easier and foot placement was also more precise. My boots are more like a shell around my feet, protecting them, but also reducing the “feel” for the path. My trail shoes offer less protection, but I feel much closer to the terrain. A couple of weeks of walking in my trail shoes and my boots are going to spend the summer in the back of the car – there just in case of bad weather.

I passed a couple of guys wild camping by Gatesgarth Beck, only 5 minutes walk from their car, with a large camp fire burning, which doesn’t do other wild campers any favours, certainly no chance of them leaving the spot exactly as they found it. 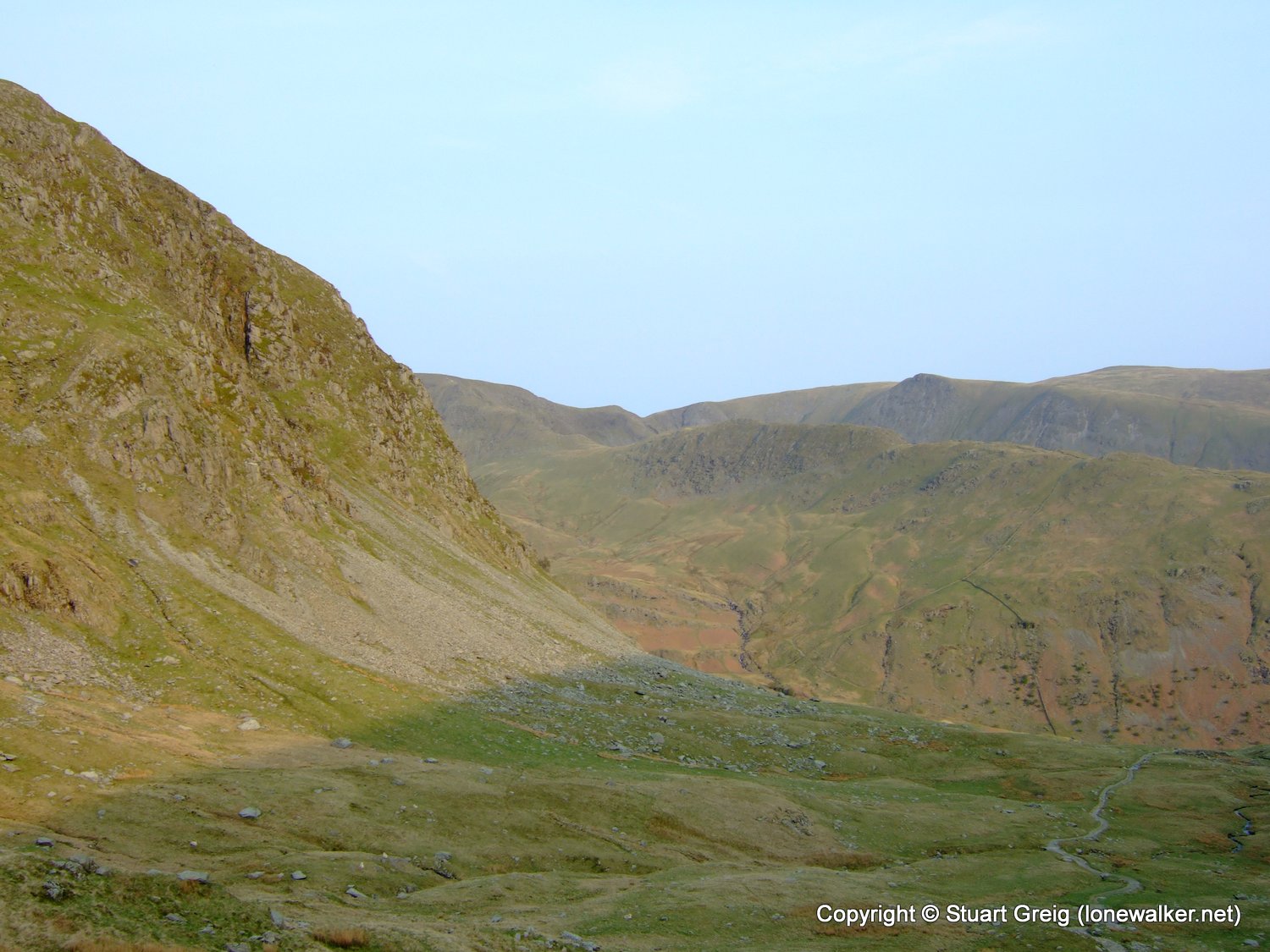 As I climbed a bit higher the sweat started to flow freely and my fleece went into my pack. Although not in direct sunshine yet, it was still warm at this low altitude. 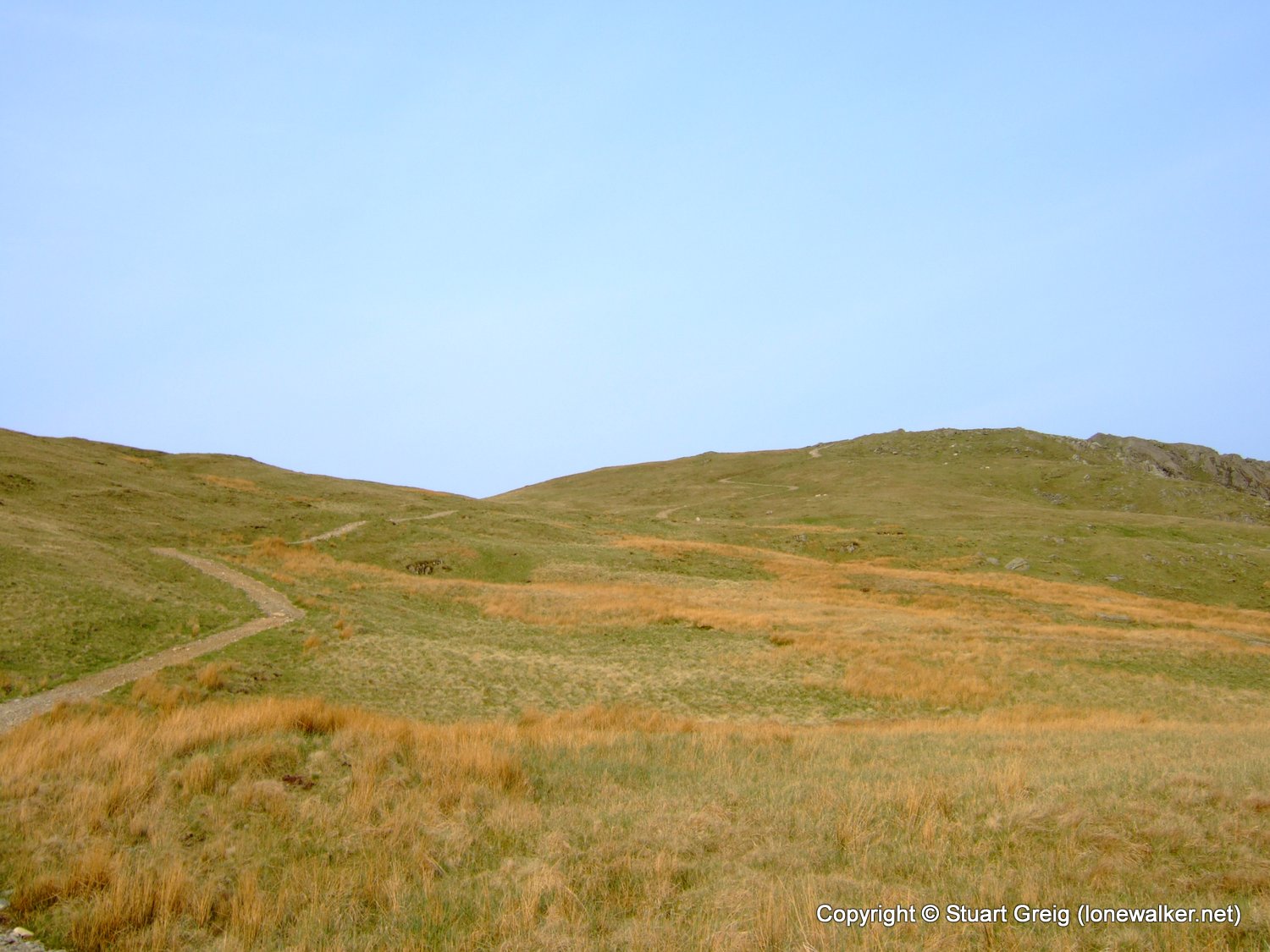 The path up to Harter Fell from Gatesgarth Pass

As I got to about 2000 feet though the wind speed increased and it was a cold wind too, forcing me to put the fleece back on. I soon reached what Wainwright calls the “fence corner” on way up to Harter Fell and the view down Haweswater is indeed stunning. 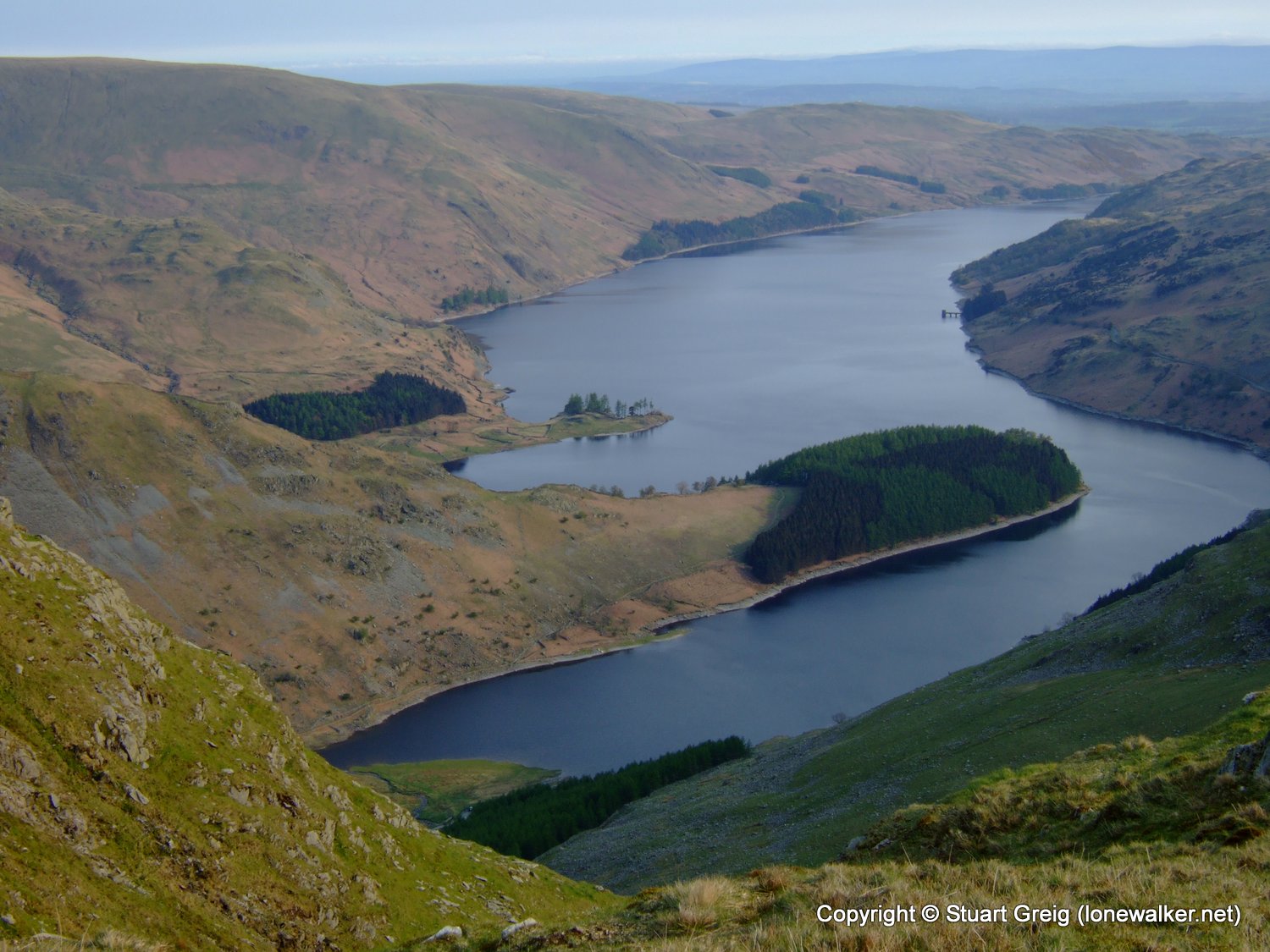 Haweswater from the “fence corner” 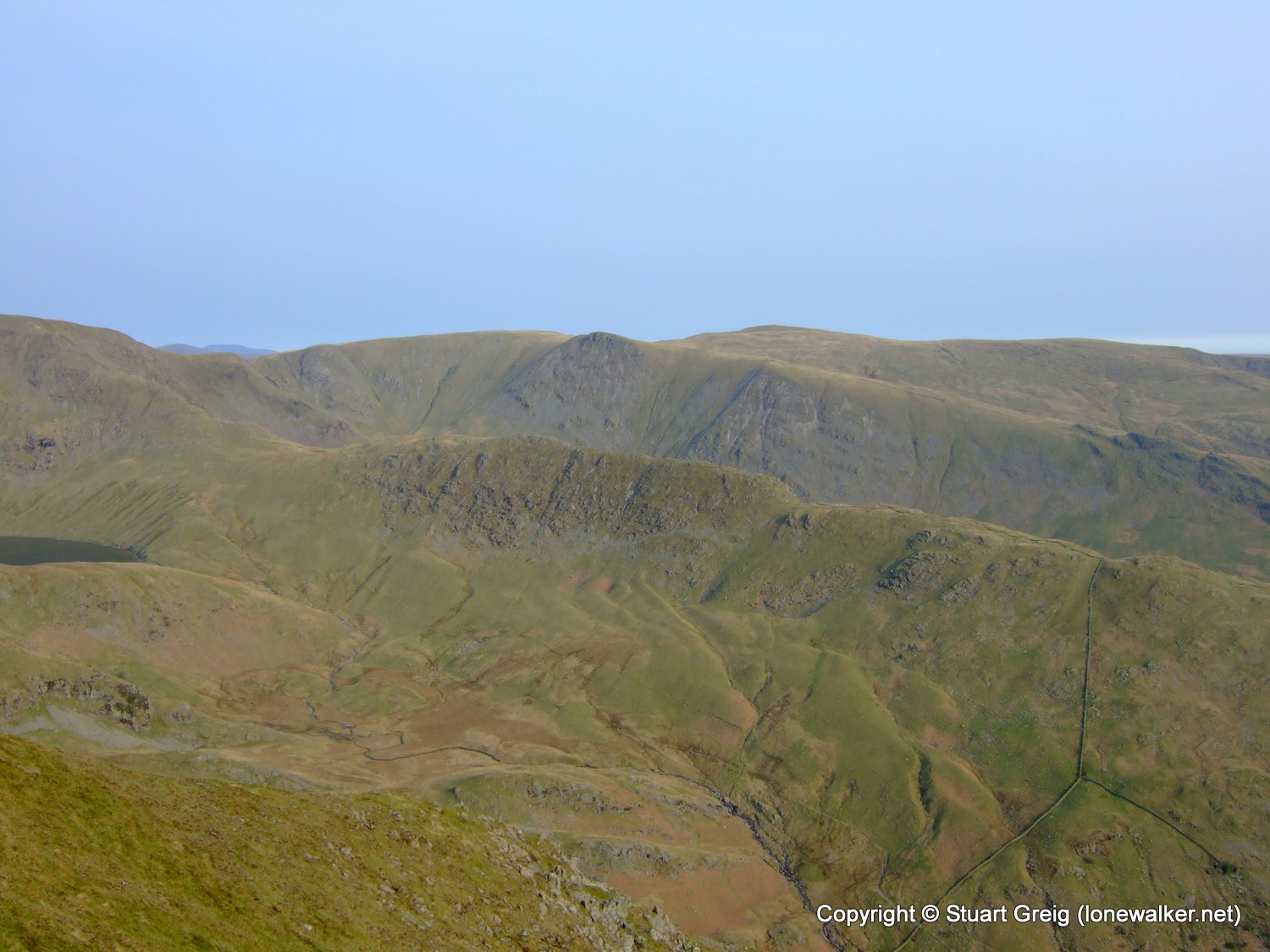 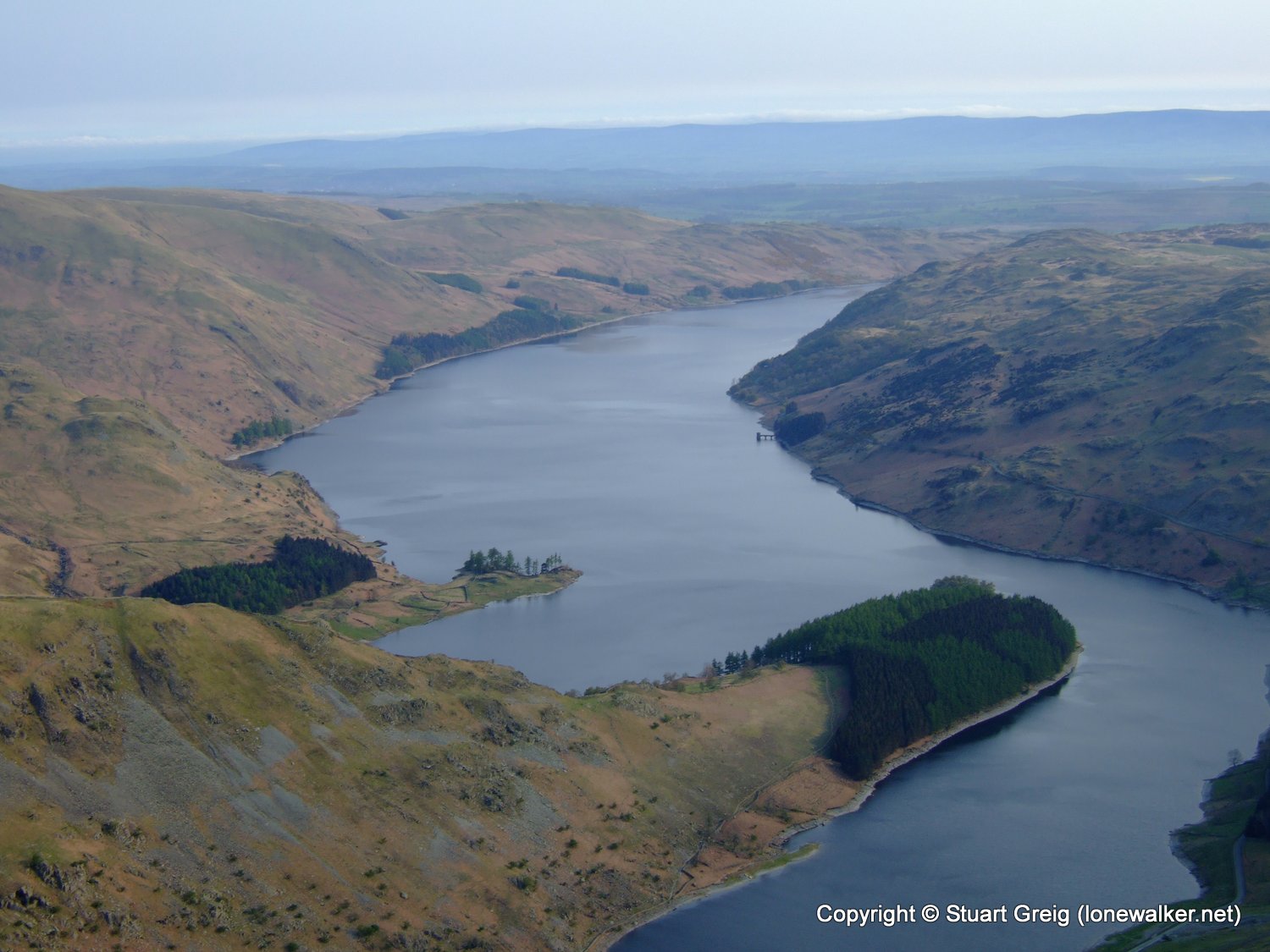 The steel reinforced cairns on Harter Fell are soon reached and the panoramas available from that spot are stunning, especially with todays clear blue skies and only slight hazing. 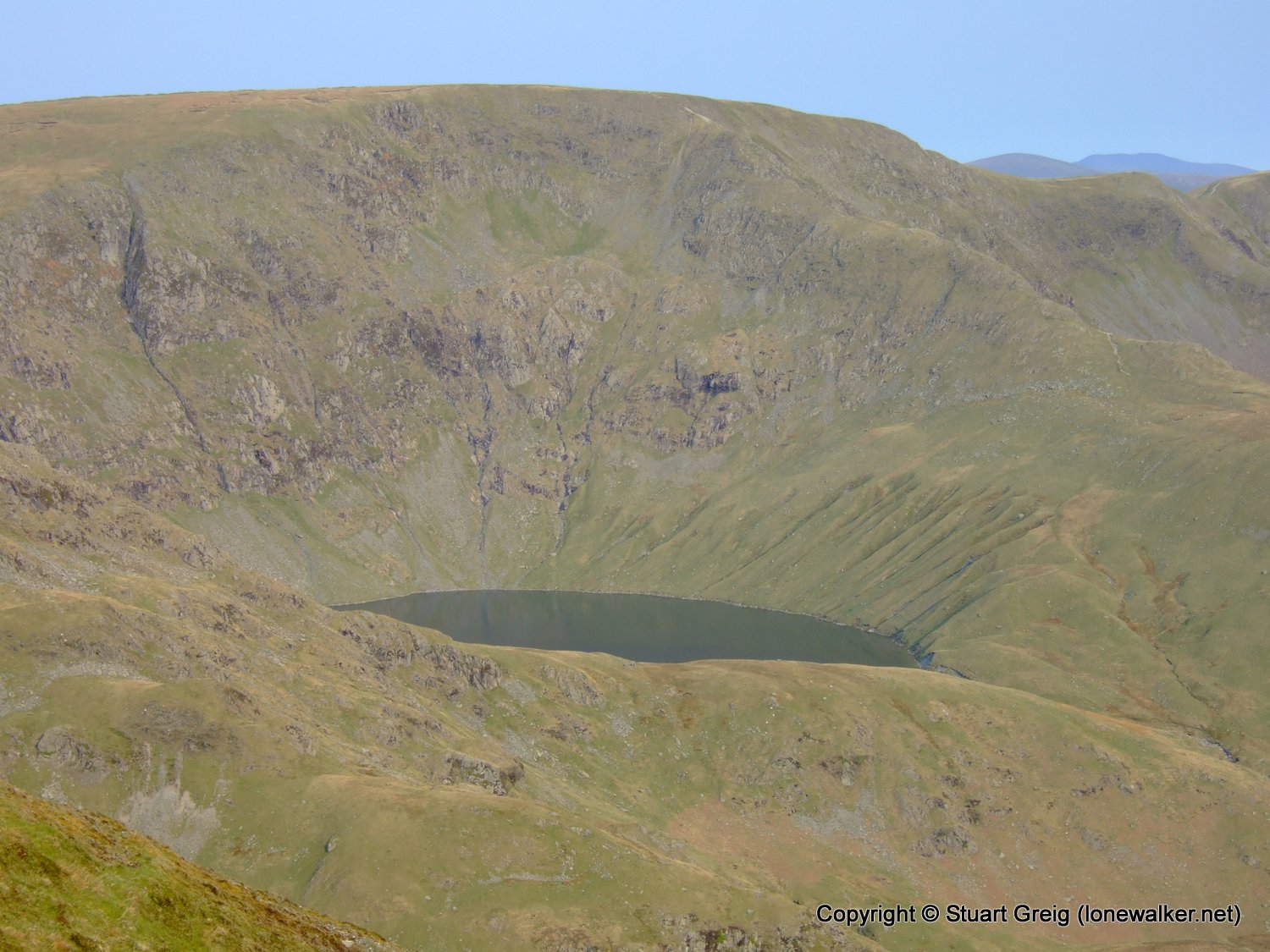 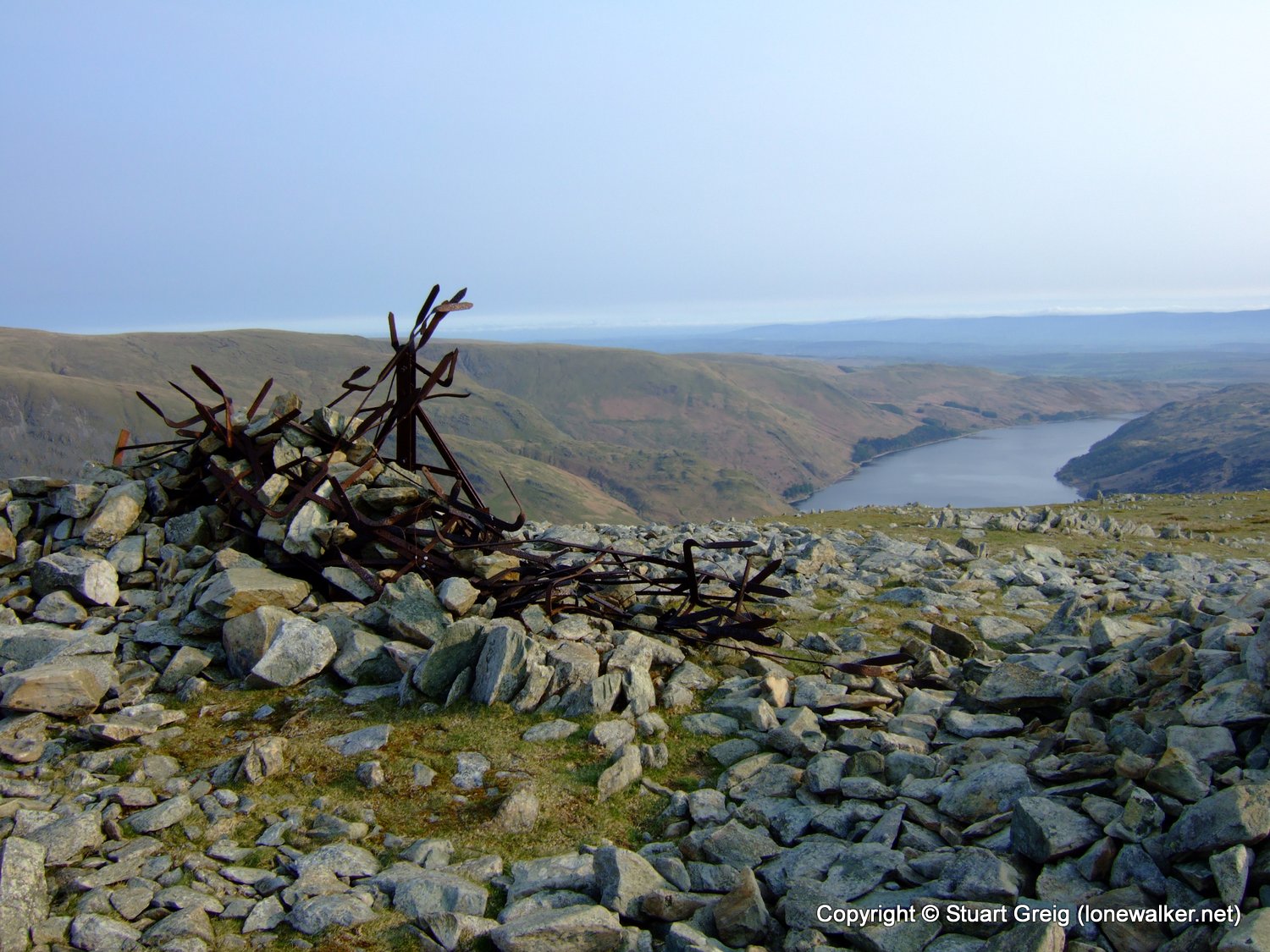 The wind was by now quite strong and as I descended from Harter Fell to cross to Mardale Ill Bell, I had to stop again to don my outer shell and hat and gloves. The views down onto the two tarns were spectacular. There is also a lot more green about than there was this time last year. Climate change scaremongers will no doubt put that down to global warming – I put it down to slight fluctuations from the statistical norm. 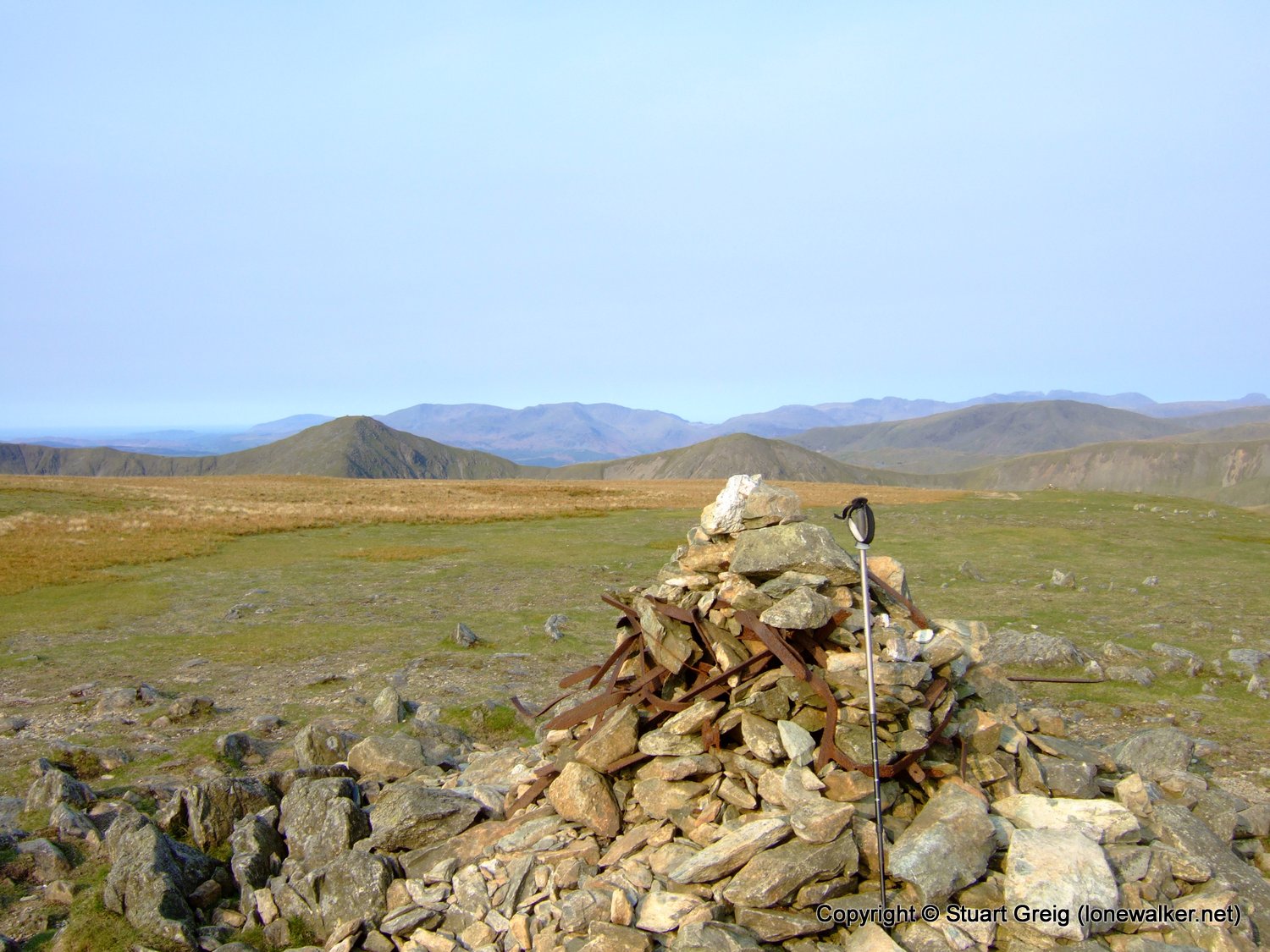 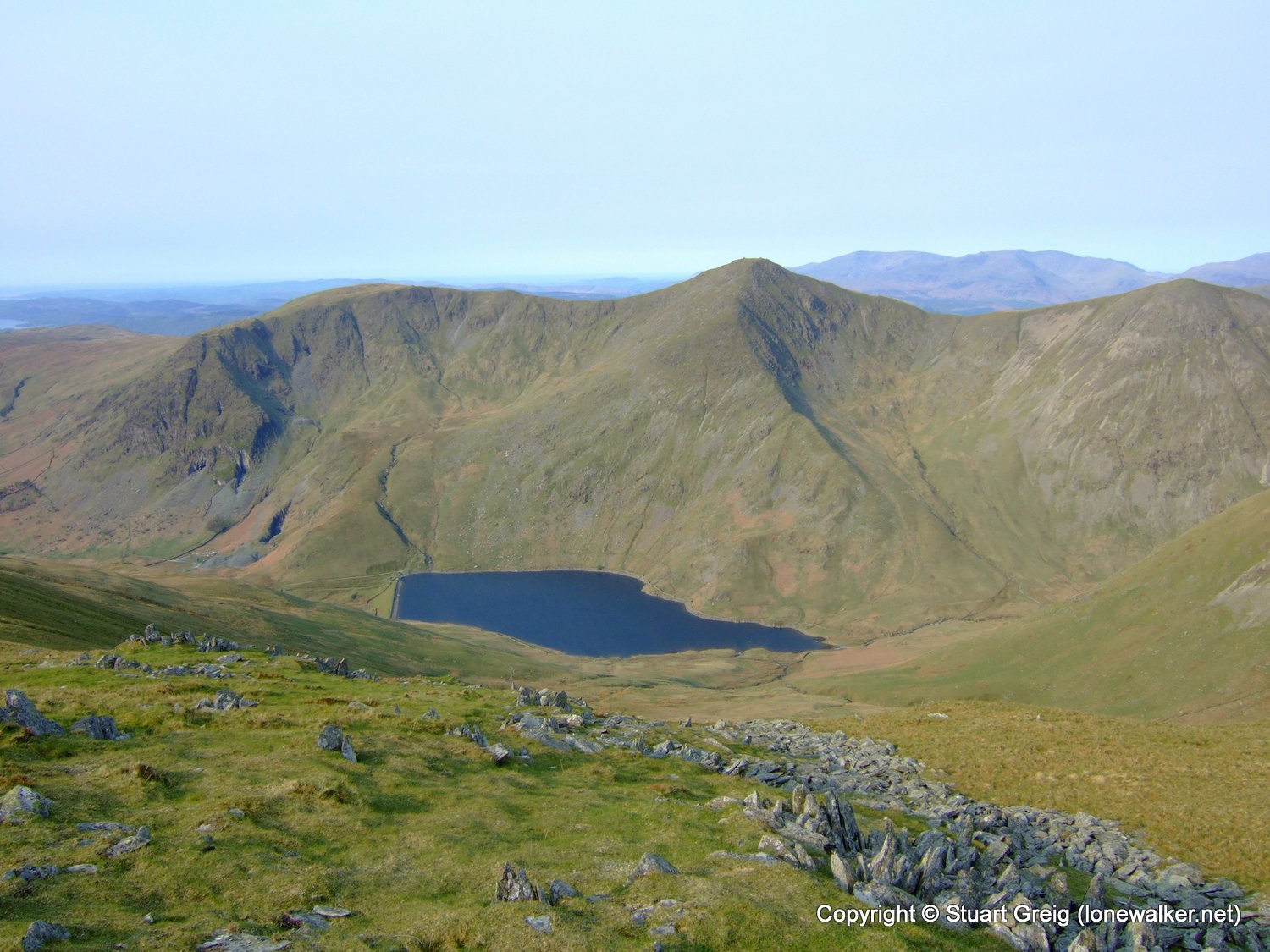 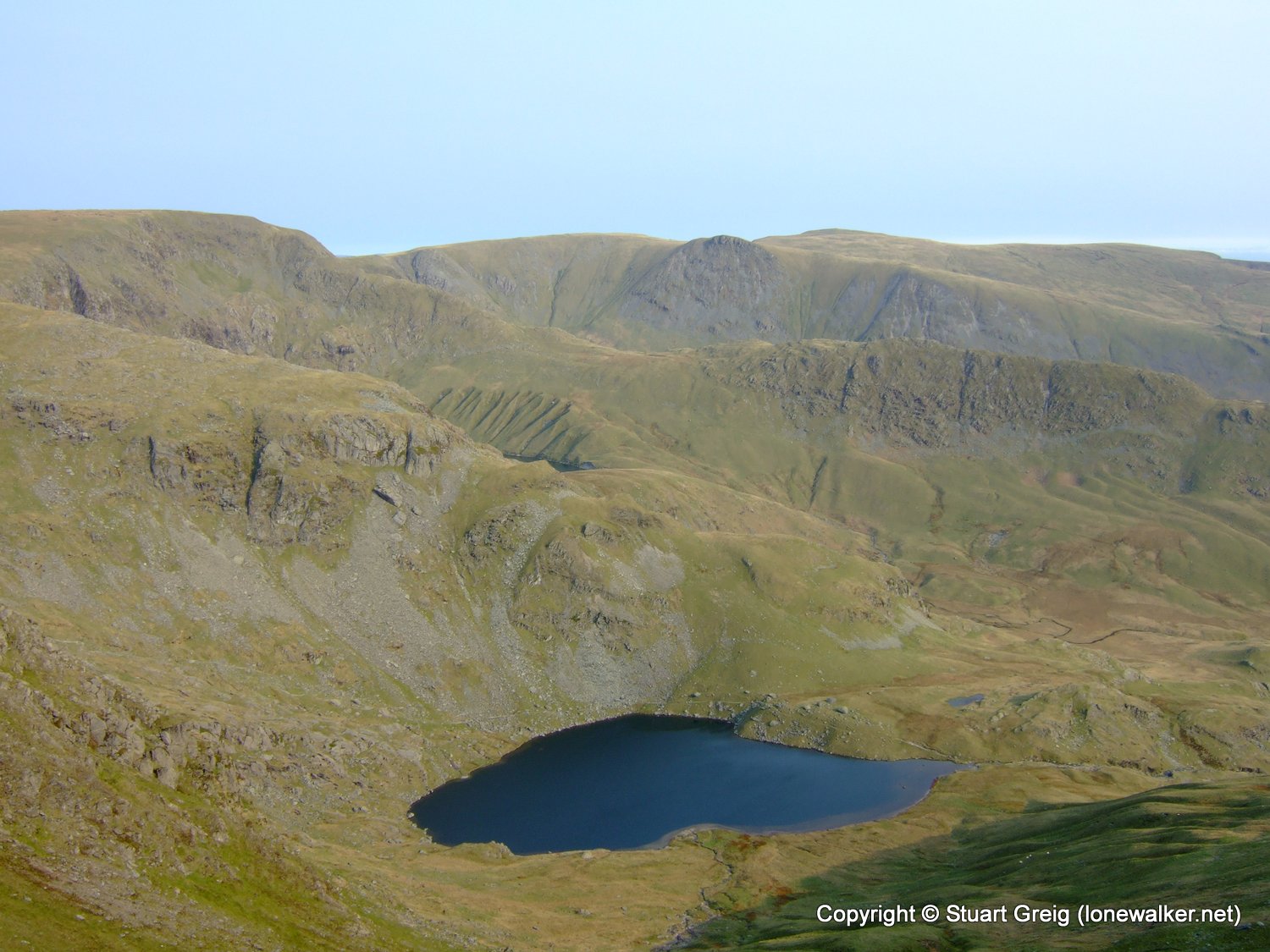 You can just about make out Blea Water in the middle of the shot. 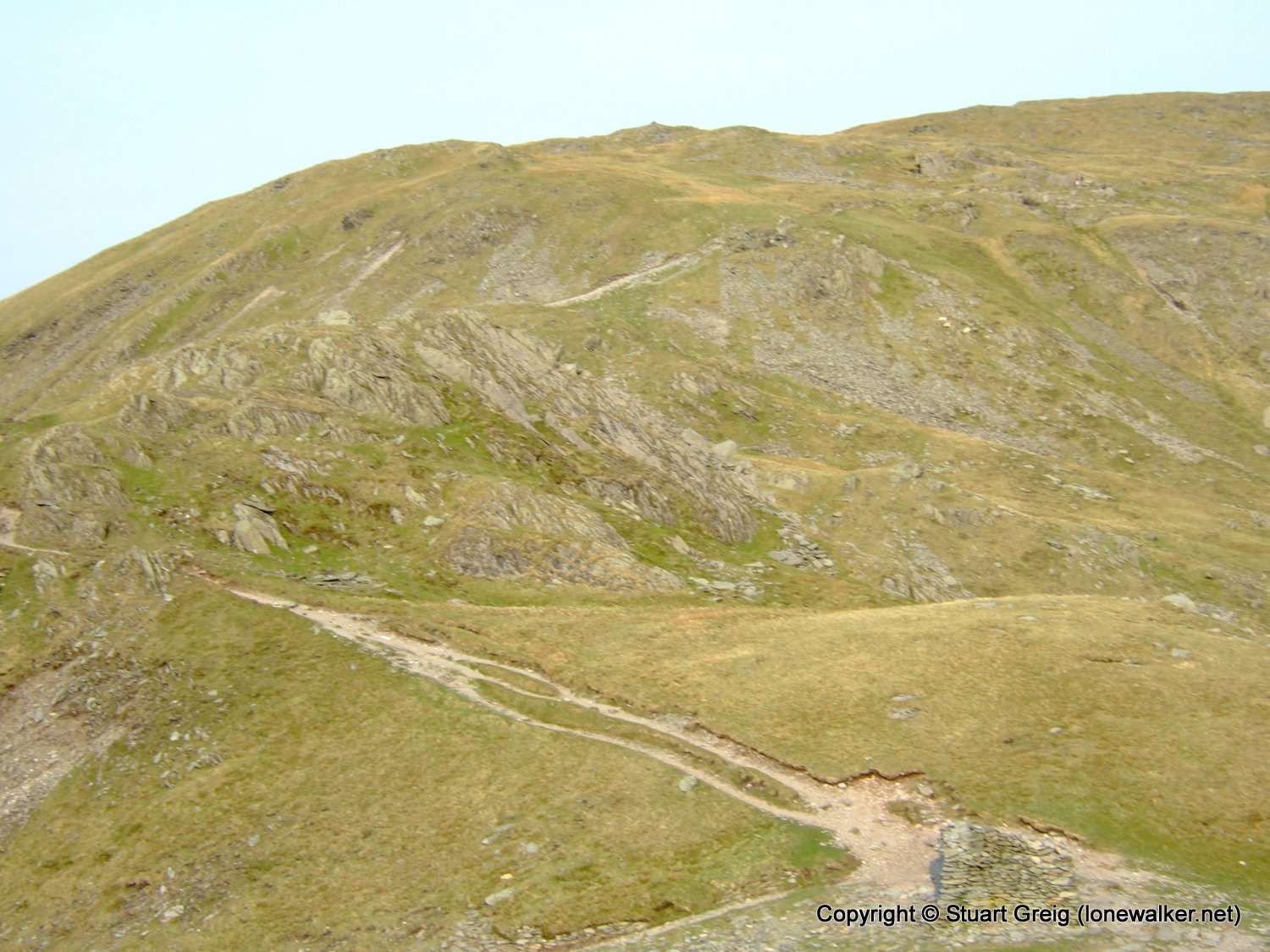 The path up to Mardale Ill Bell 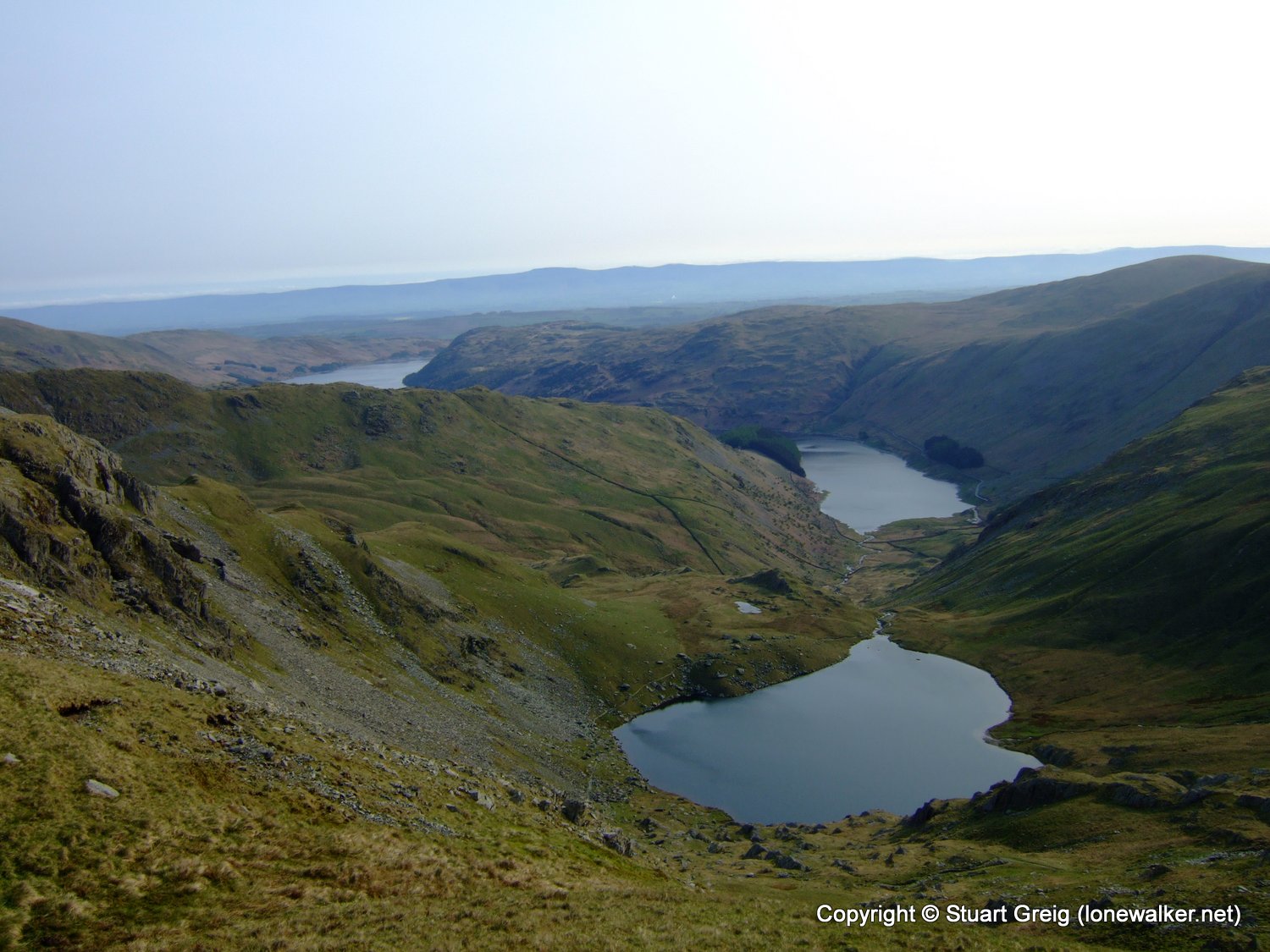 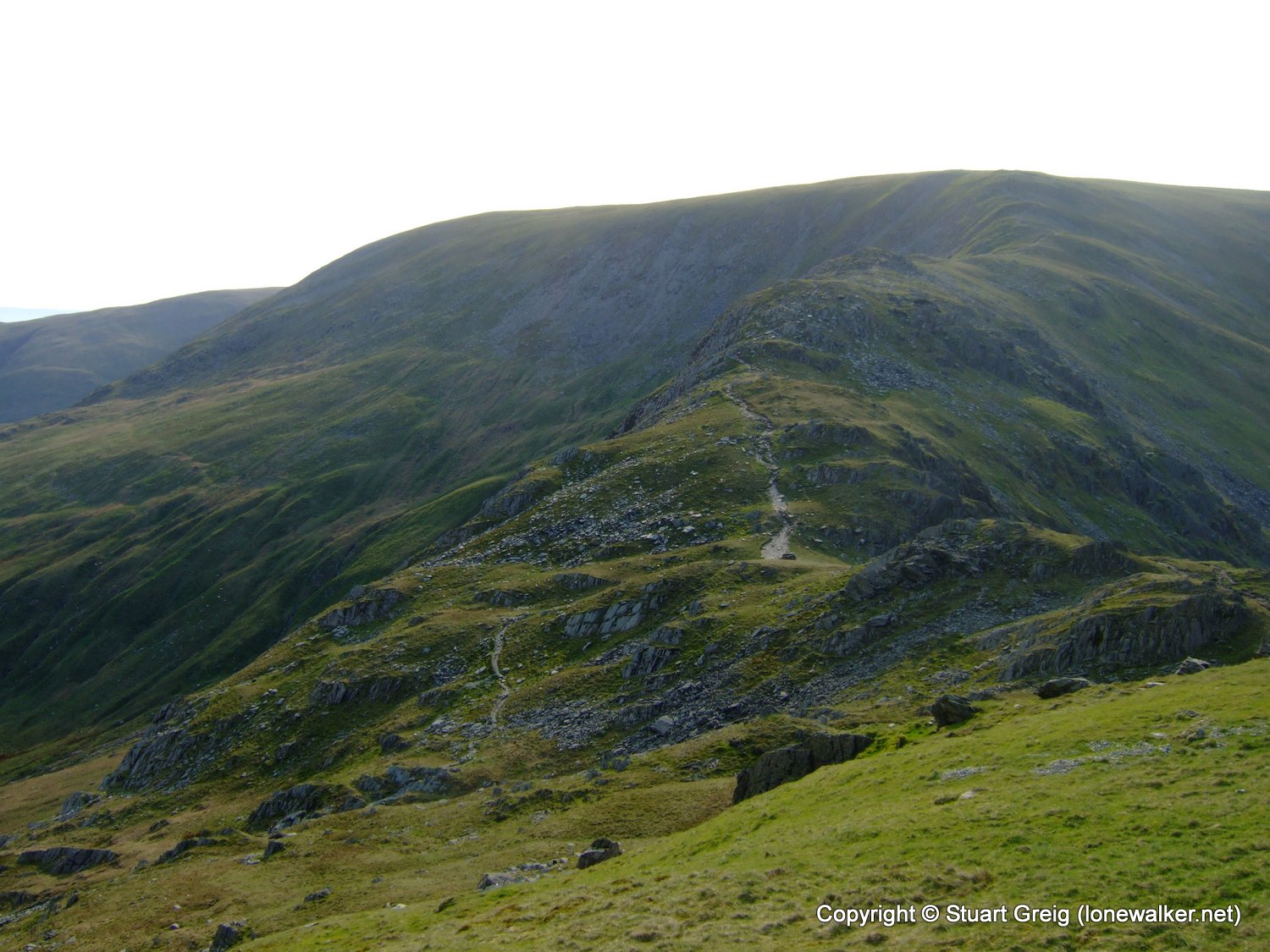 As this was my first visit to the area from this direction, I was confused for a while after crossing Mardale Ill Bell by what turned out to be the beacon on Thornthwaite Crag, as I took it for the trig point on High Street. It was only after a few minutes and a check on my GPS that I realised the error and had to hack back up hill a ways to regain the correct track to High Street. 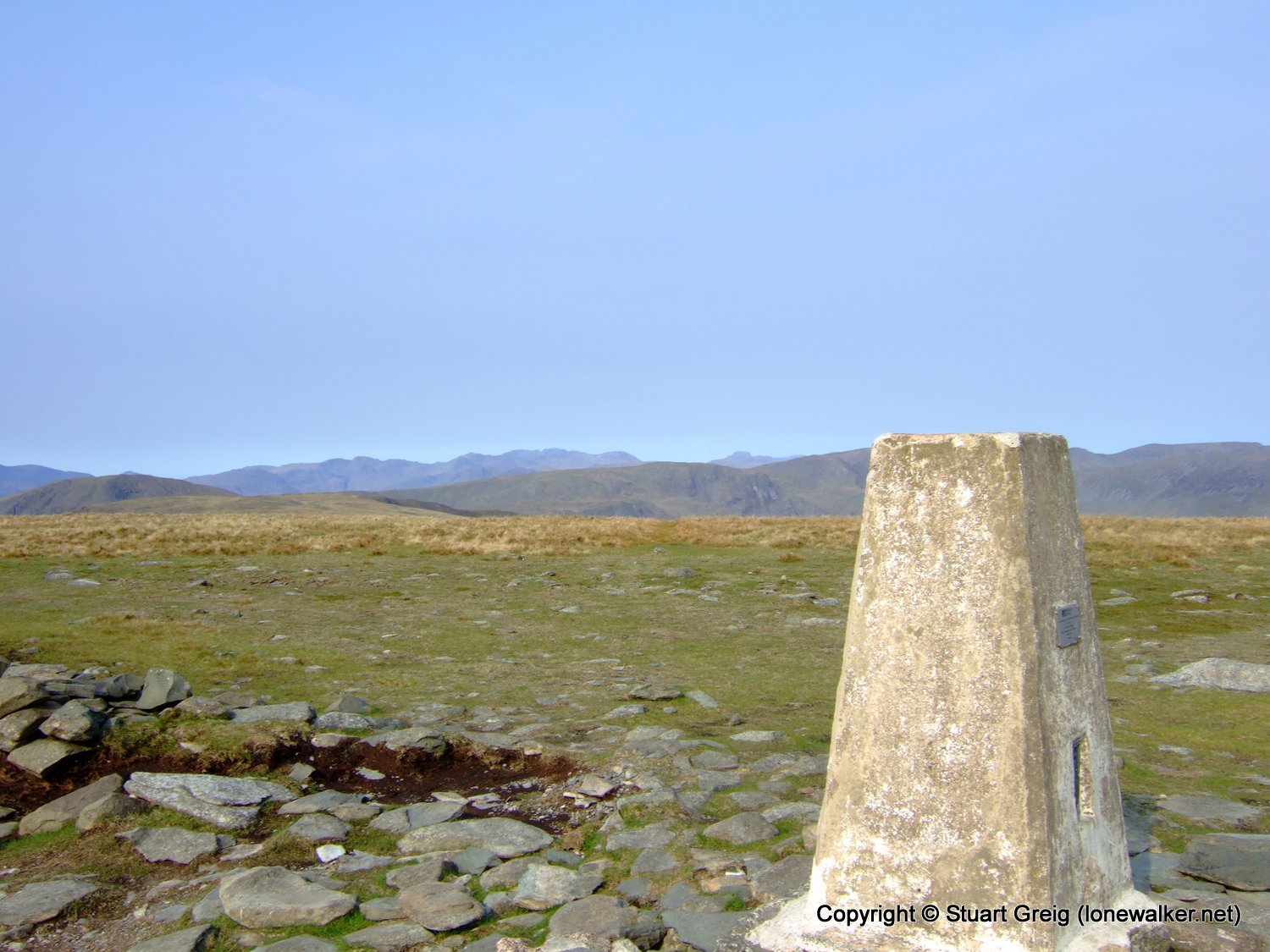 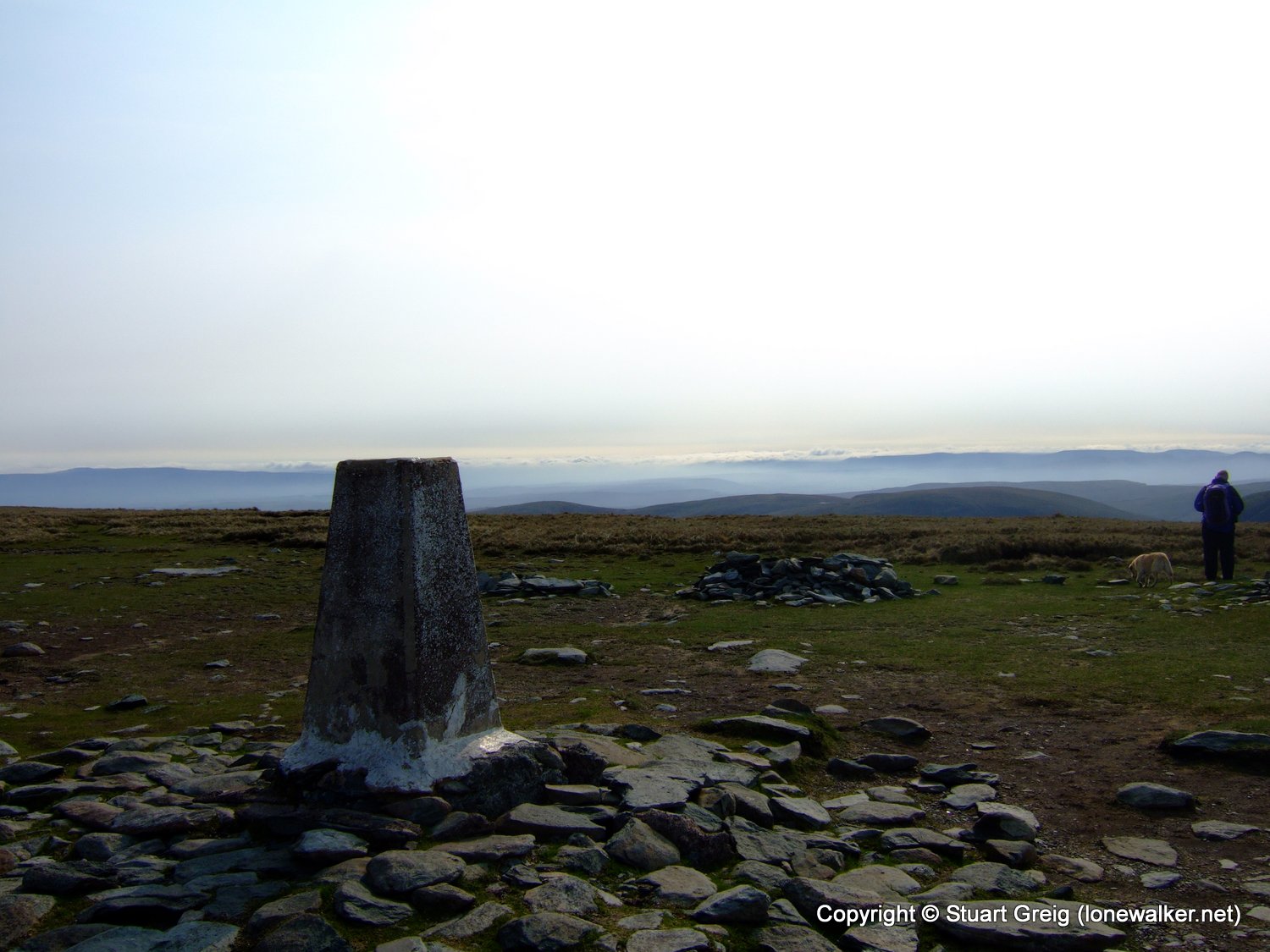 At the summit I met the first walker of the day with his Yellow Lab, he didn’t say much but hung around for a few minutes. I took some panorama shots of the western fells (which didn’t work for some reason) before heading off down the roman road towards the Straits of Riggindale. I met the second walker of the day on his way up High Street and another couple as I approached The Knott, which has a huge cairn considering the small size of the summit itself. 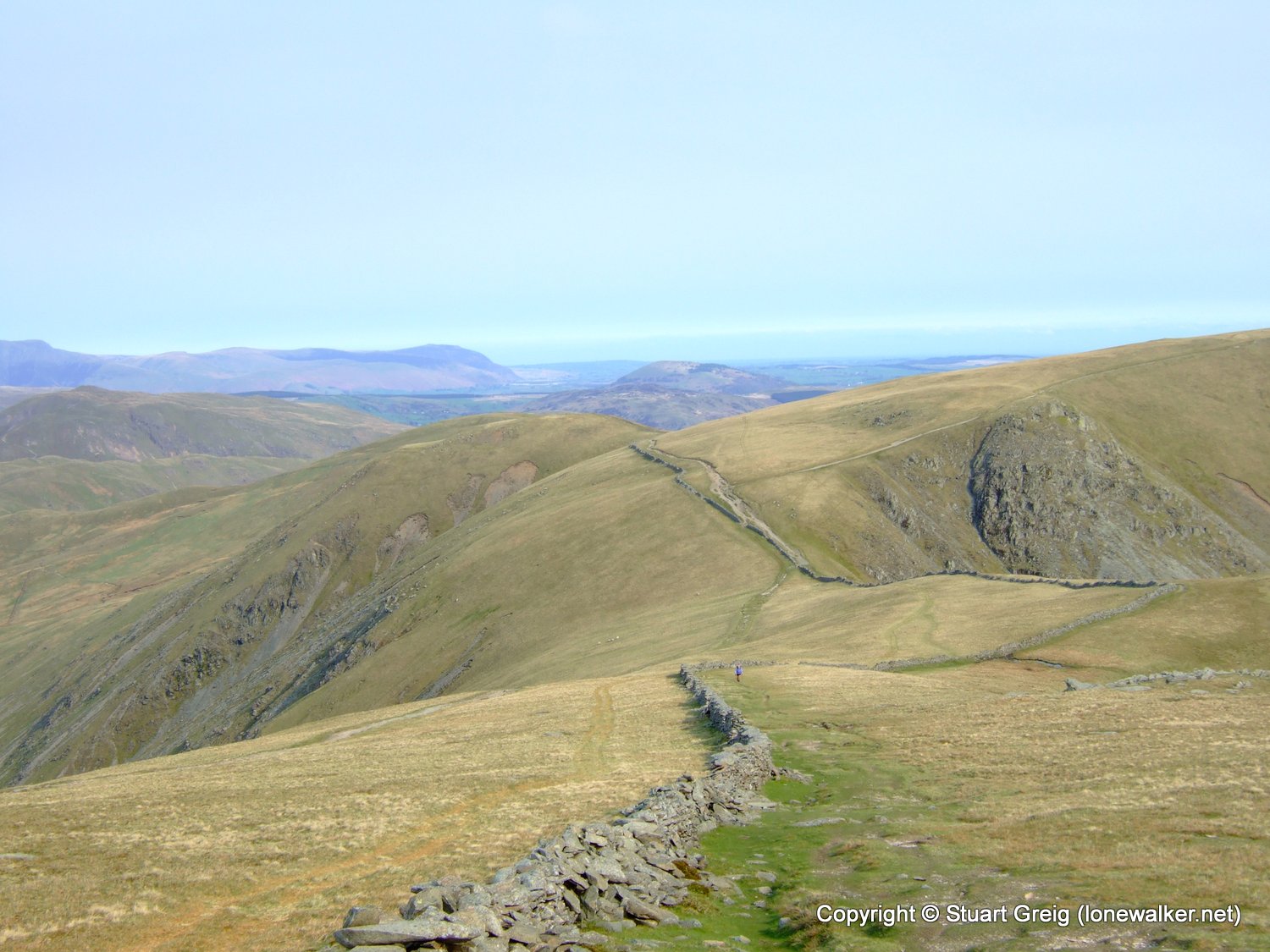 Looking down High street towards the Knott

I cut back along the Straits and then left along the path towards Kidsty, but kept heading straight for Rampsgill Head rather than following the bend in the path to Kidsty summit. Of all todays summits I think I liked Rampsgill the best. The views across to the Helvellyn range, down into Ramps Gill, across to High Raise and the rest of the skyline was fantastic. 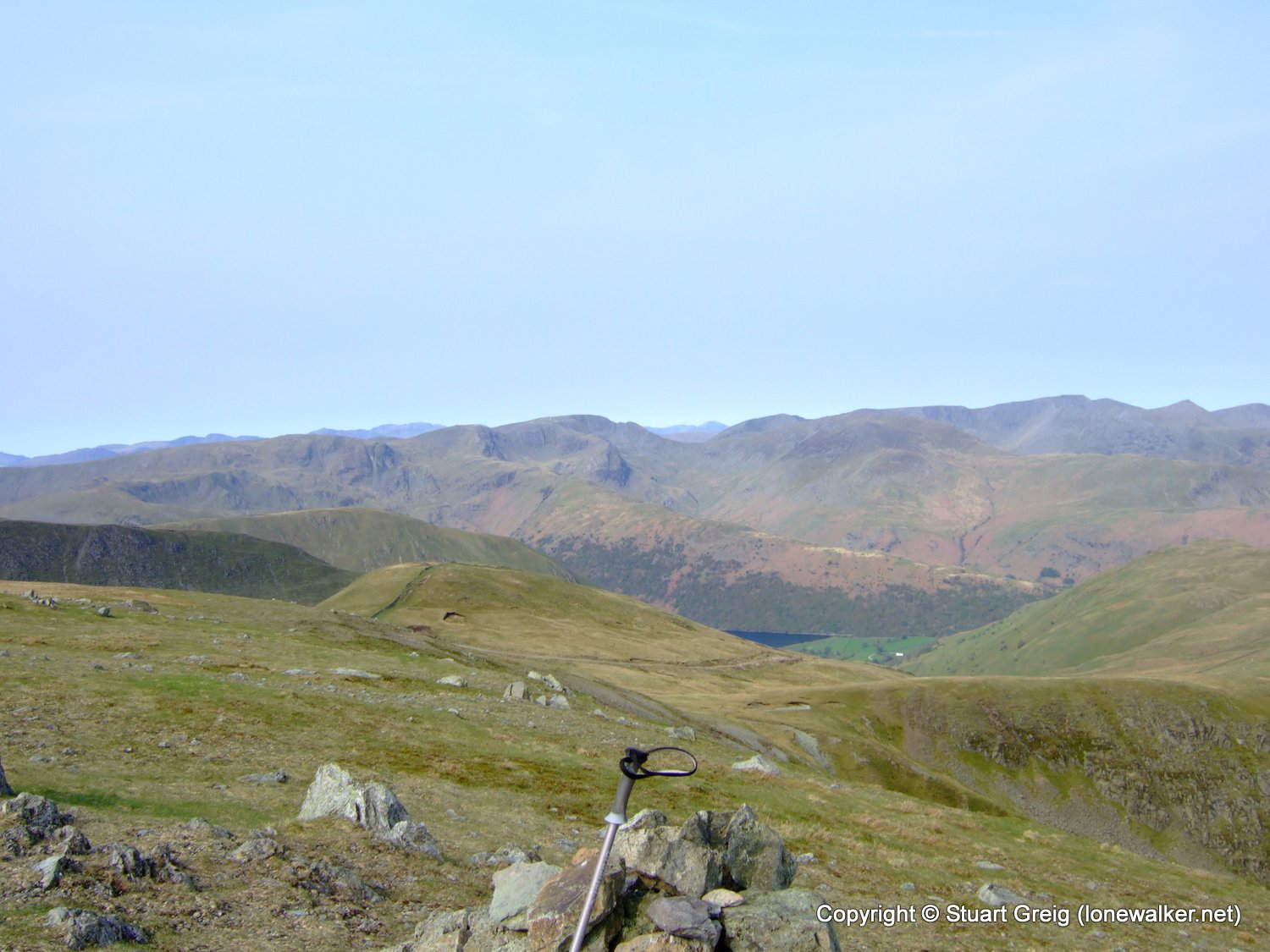 Looking towards Helvellyn from Rampsgill Head

At High Raise I tried to get out of the wind for a few minutes in the summit shelter, but its either built in the wrong direction, or today’s winds were not blowing as they usually do. I ate my lunch of flapjacks and Lucozade and then headed across to Kidsty, passing a couple of non-communicative fell runners on the way. When I reached the summit of Kidsty Pike on the C2C I was nearly blown away by the wind and today was almost as ferocious, at least this time I didn’t slide half way down on my arse as I did last year. 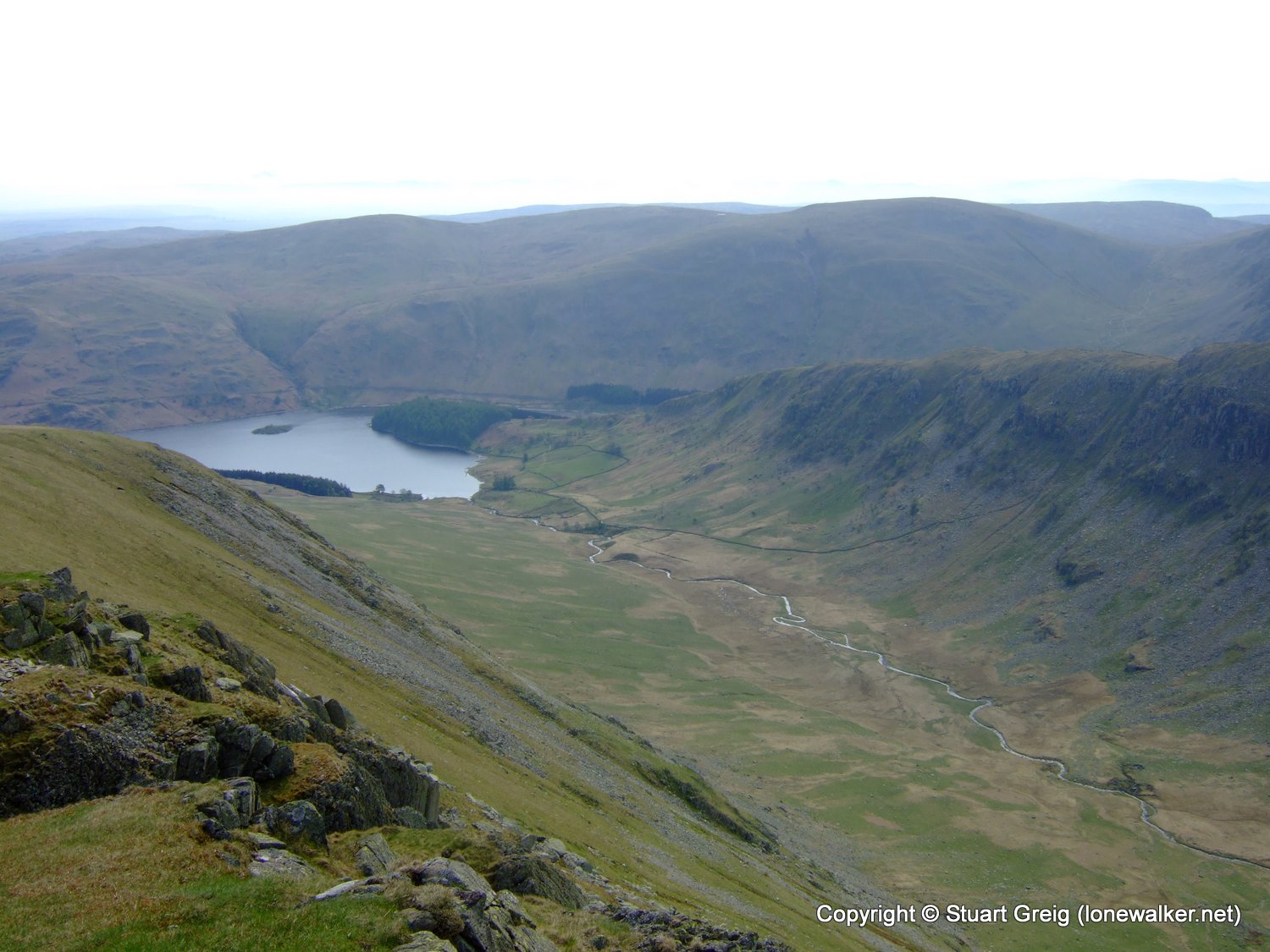 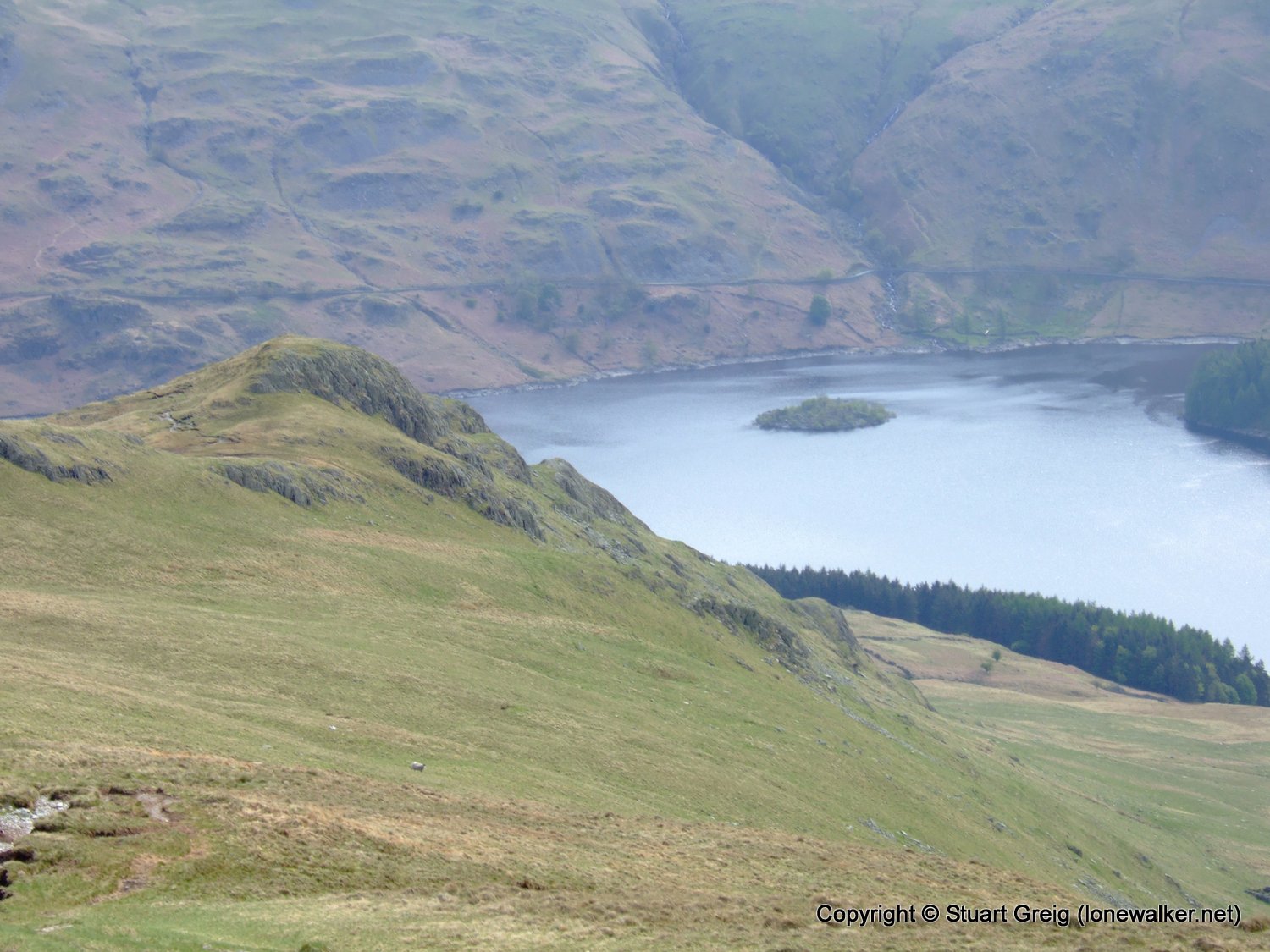 The path down from Kidsty Pike to Kidsty Howes and Haweswater

By the time I reached Kidsty Howes I could remove my two outer layers as the wind was much reduced and the sun warmed me up.

I stopped and chatted to a Brum for a few minutes, I think he needed to catch his breath – he’d not been out on the hills for a few years he said, but was enjoying the return.

I passed several girls probably doing DofE with the largest packs I have ever seen. They were almost bent double as they ascended the steep hill, but fair play to them, they kept at it all the way to the top. 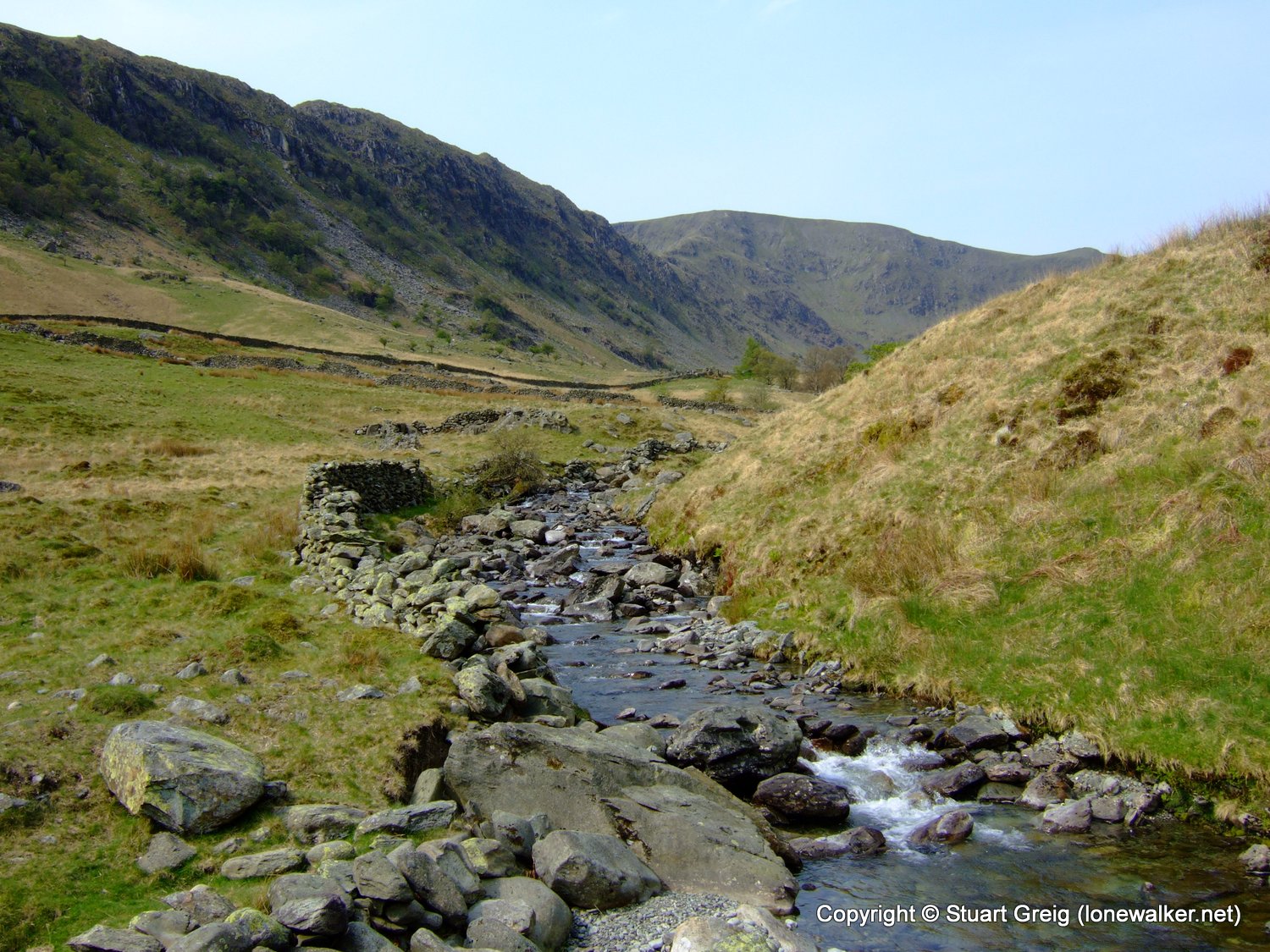 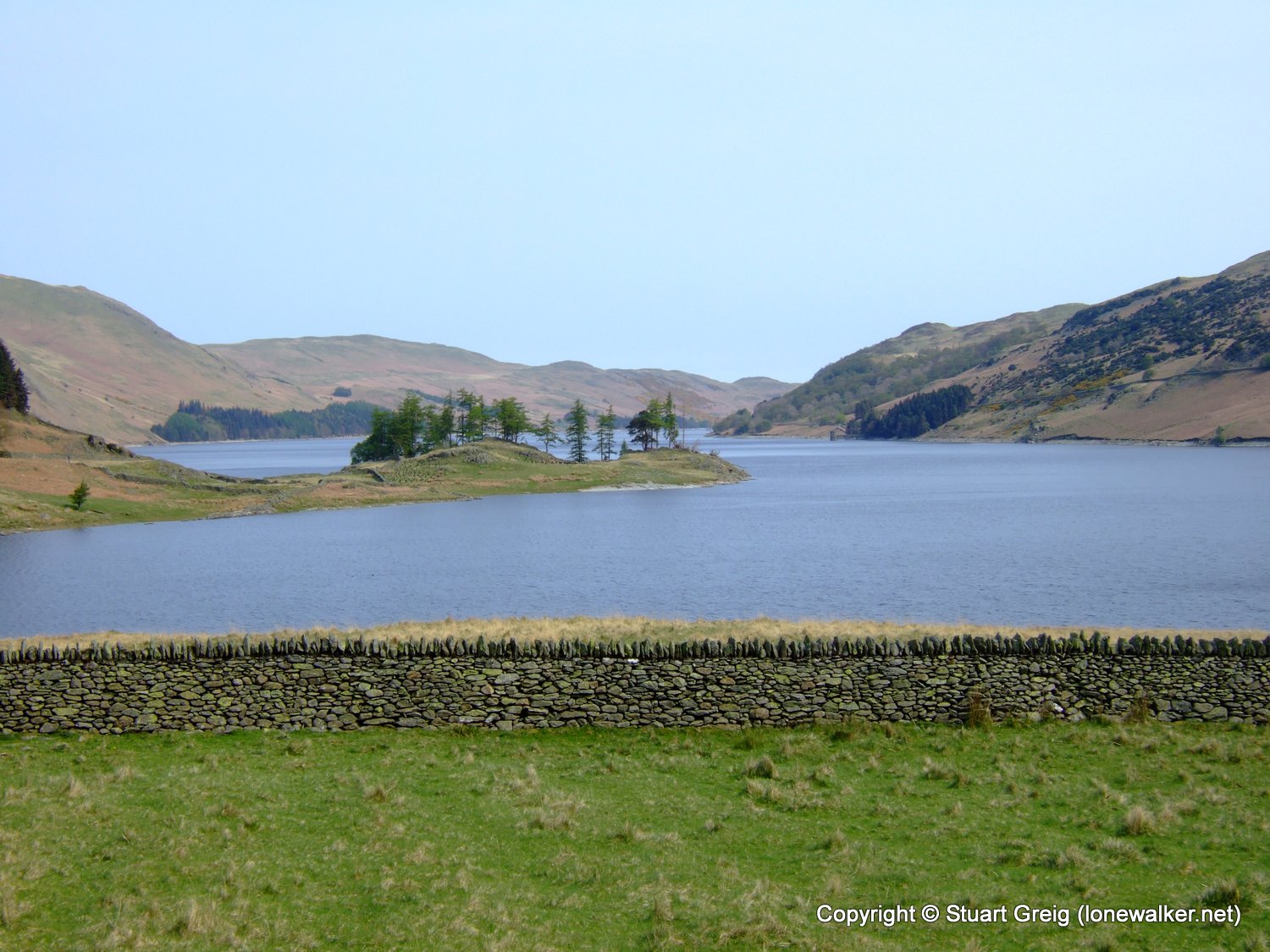 Speaking Crag from The Rigg

It was almost midday now and the beautiful weather had brought herds of people out, it was an almost constant flow of people heading towards me across the Rigg from the car park at the end of Haweswater. By the time I got back there must have been 100 cars parked there, overflowing the car park and spilling out along the road. I’m ever so glad I’m an early starter!