I was feeling a bit nostalgic for the Far Eastern Fells this weekend, so decided to head over to Mardale Head and walk up to High Street along the ragged ridge line of Rough Crag. I’d tried to walk this route last September, before I left on my Offa’s Dyke walk, but torrential rain and a broken pole sent me scampering back to the shelter of the car before I got half way along the ridge. The weather this weekend looked quite promising, so I put together a long-ish walk taking in one or two surrounding Wainwright’s and a return to the car along the shoreline of Haweswater. 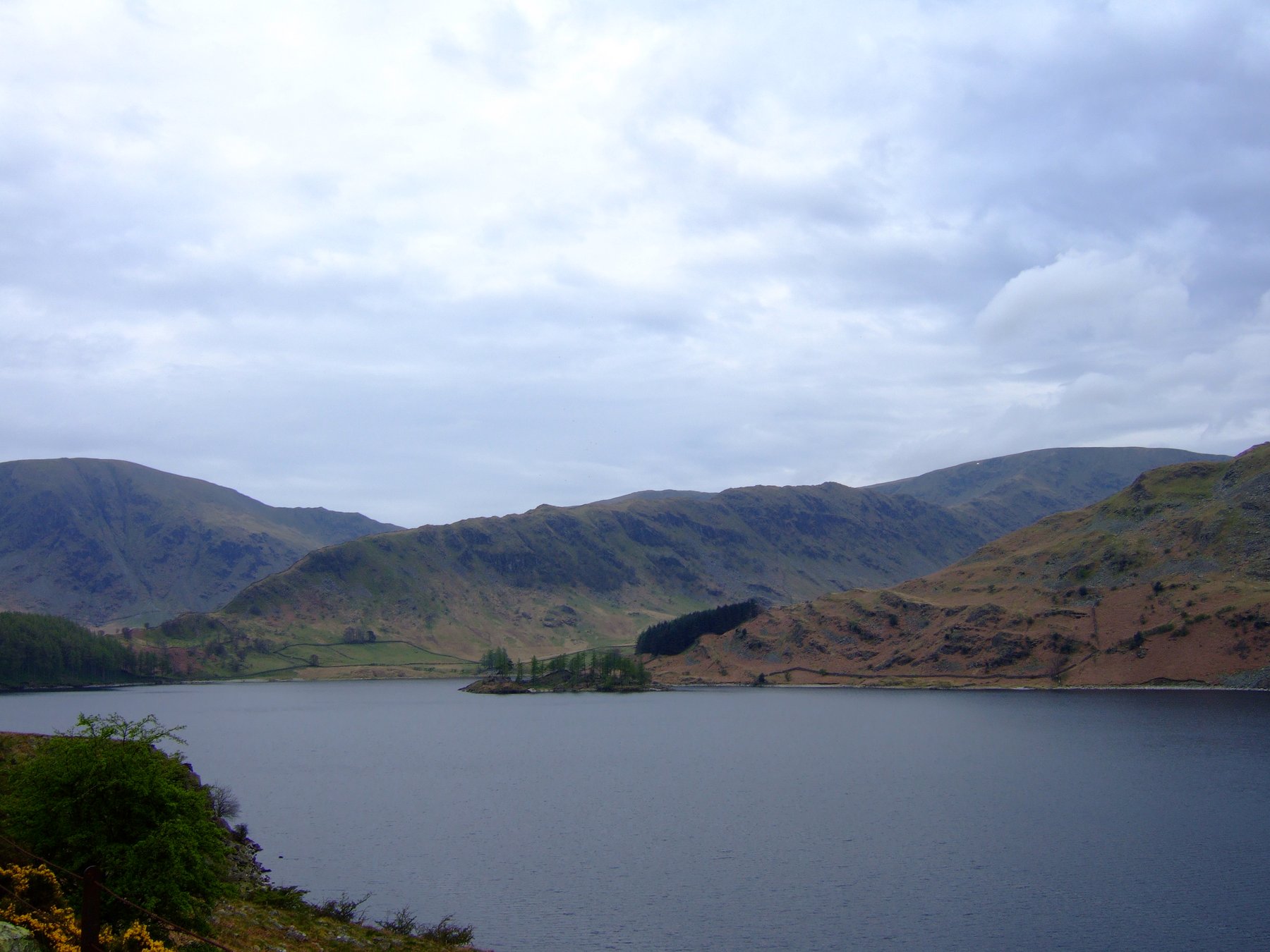 Haweswater and Rough Crag from the road 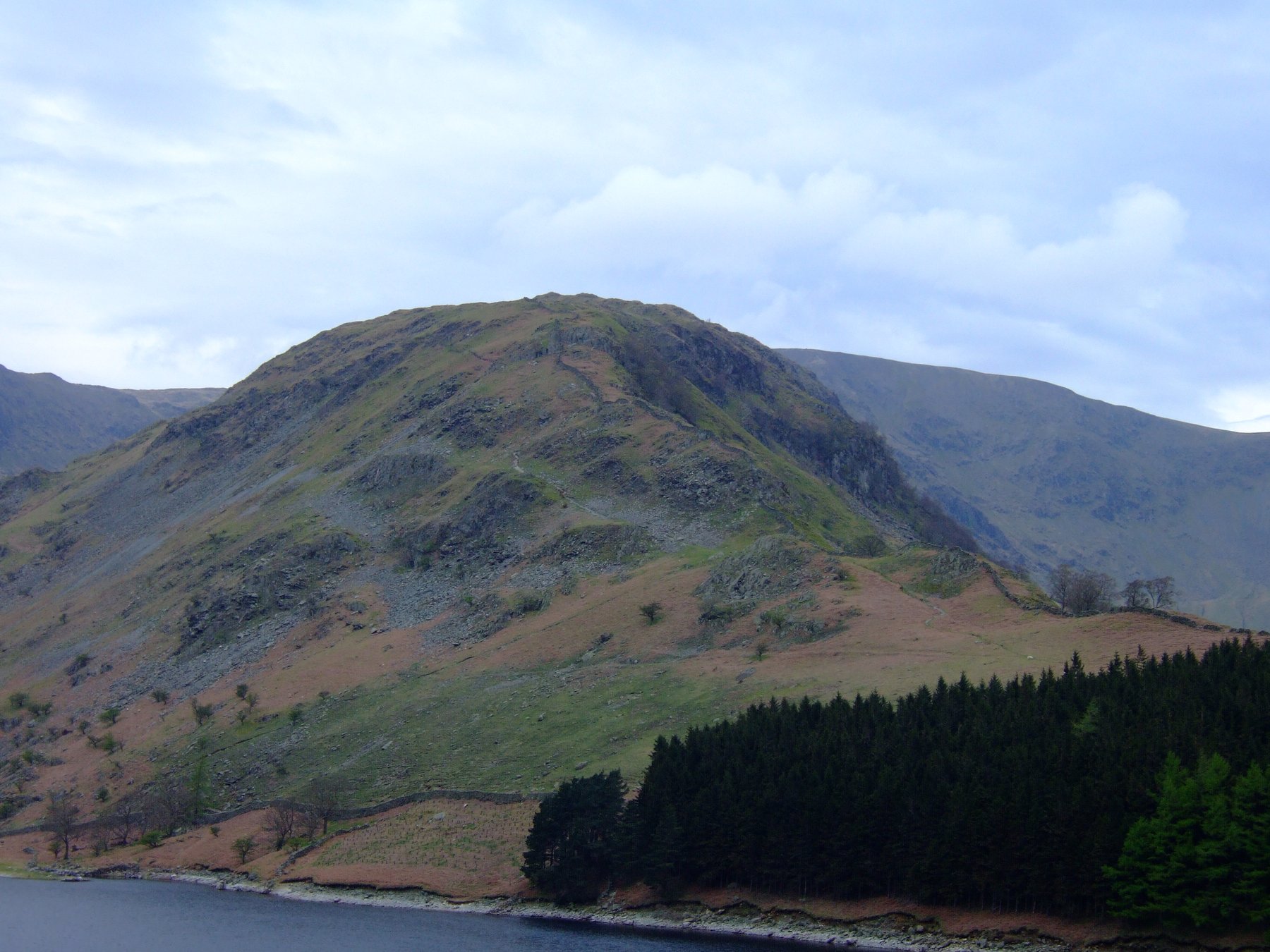 Tex Gore was off walking in Scotland this weekend, so I was on my own when I arrived at the car park in Mardale. As ever, the car park was not empty and I was about the 10th car to arrive. As I was getting myself sorted, I was approached by a young guy who asked me if I had walked in this area before. I replied that I knew the area quite well and he proceeded to unfold his map on the bonnet of my car. He explained he was looking for the eagle that nests somewhere in the vicinity and could I suggest a long walk that would give him an opportunity to spot it.

Having spent a lot of time in this part of the Lakes last year, I felt qualified to show him one or two different routes around the nearby fells. He explained he had all day and plenty of energy, so I suggested a long circuitous route up to Nan Bield, over High Street, then along to High Raise, Wether Hill and then return along the lakeside path.

12 months ago I would have shrugged my shoulders and left him to his own devices, but now I was able to point out all the hills and all the tracks up to them. I was able to give him estimates on how long walks would take and tell him how tough particular ascent routes would be – all in all I felt like I knew this part of the Lakes like my own back yard. It’s a wonderful feeling – a feeling of belonging – and a feeling of knowledge. 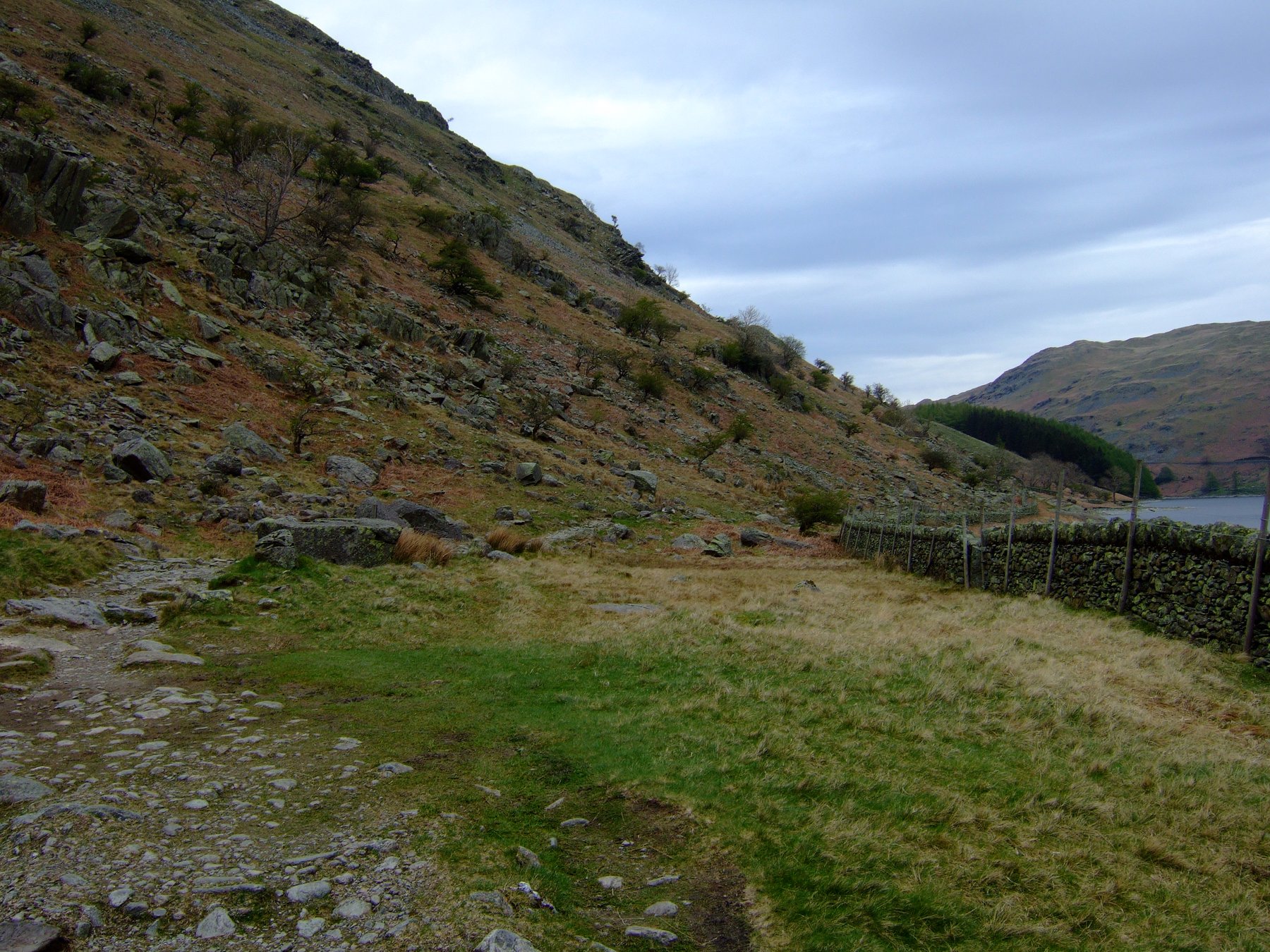 The path leading to Haweswater

On the OS Landranger series (1:50K), Rough Crag is used to describe the whole of the ridge rising from the Rigg, all the way to Long Stile, just below the summit of High Street. On the OS Explorer series though (1:25K), the ridge is shown as having a number of distinct crags before Rough Crag; namely Swine Crag, Heron Crag and Eagle Crag. For simplicity I am just describing the whole ridge as Rough Crag. 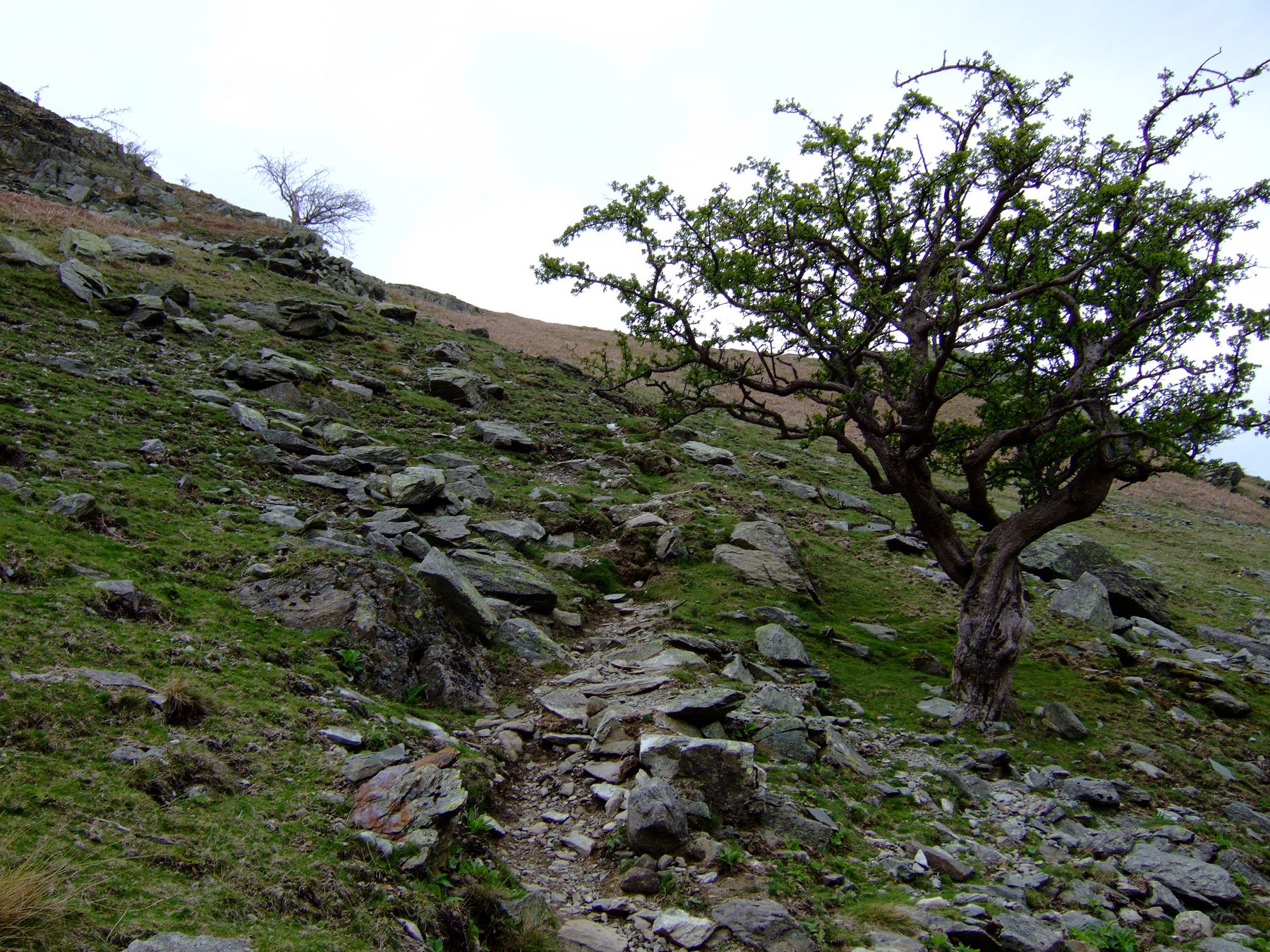 This is the path up the side of Rough Crag, from the Haweswater path, leading to the old wall on the ridge line.

There is a rough narrow path that angles up the side of the eastern end of Rough Crag and joins the old wall at the spine of the ridge. I remembered the old twisted tree beside the path from the last time I was up here. This time I managed to avoid it getting entangled in my pack. 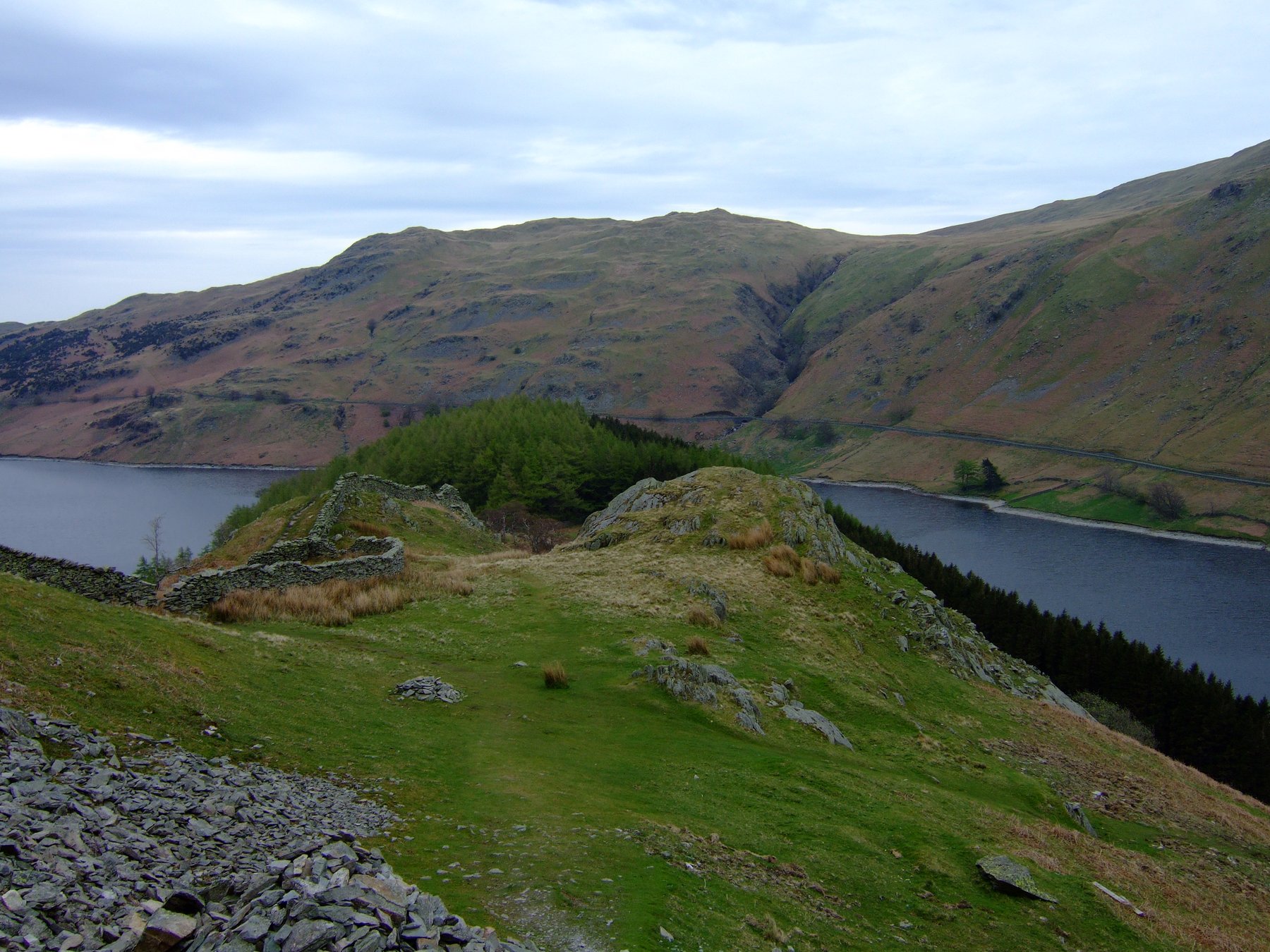 The path from the side of Haweswater meets the old wall. The wooded top of the Rigg beyond 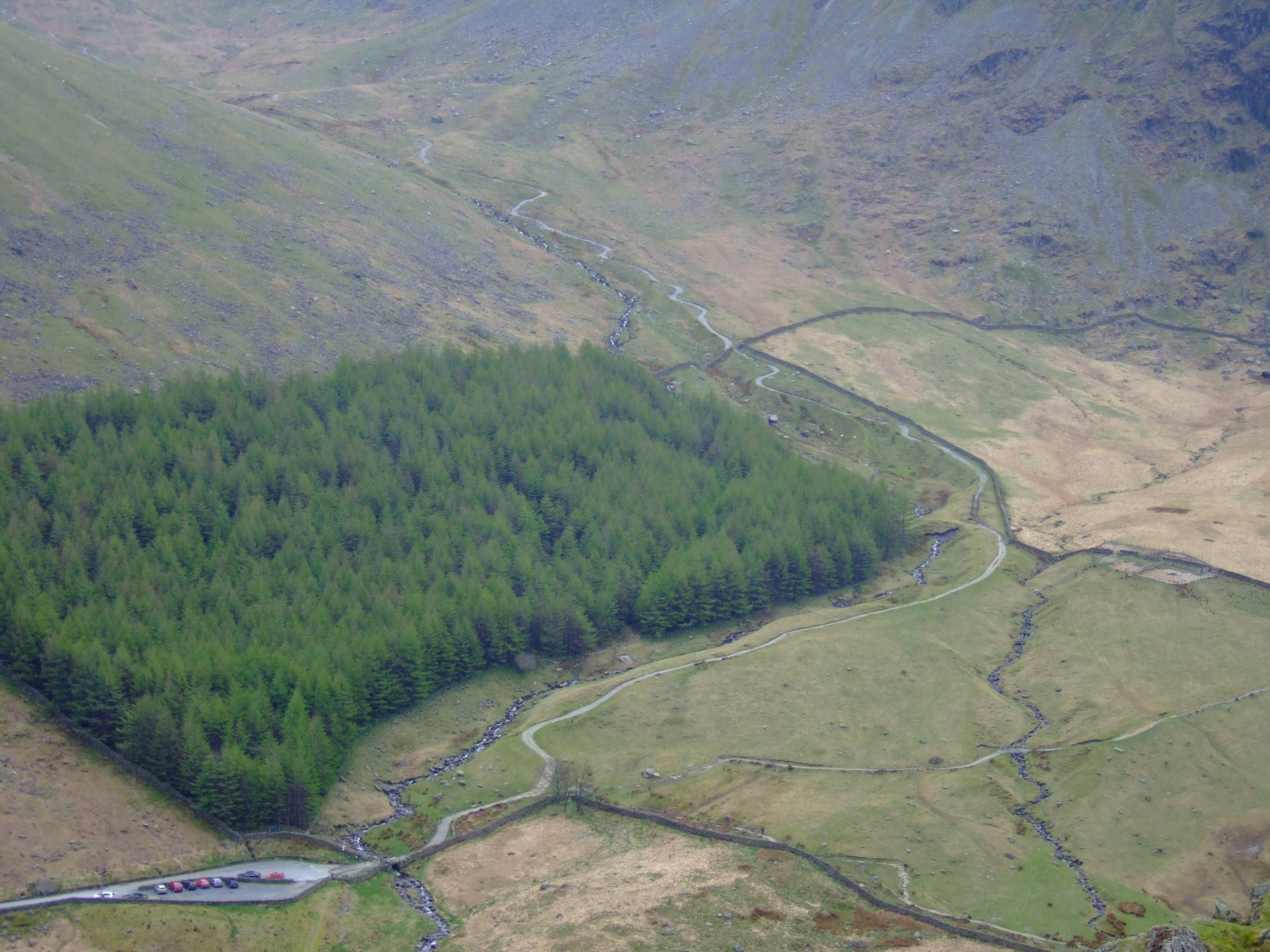 The path winding its way up to Gatescarth Pass. My car in the car park below

It’s great to gain some height over not a lot of distance and be able to look down on your car far below. I could see a couple of new arrivals taking to the various paths leading from the car park, although none of them seemed to be heading y way.

The weather was still overcast and the wind was gusting quite fiercely in places. I had to stop after a while and put my coat on, just to cut out the wind chill as much as anything. I knew this would make me sweat more, but you can’t eat your cake and have it can you? 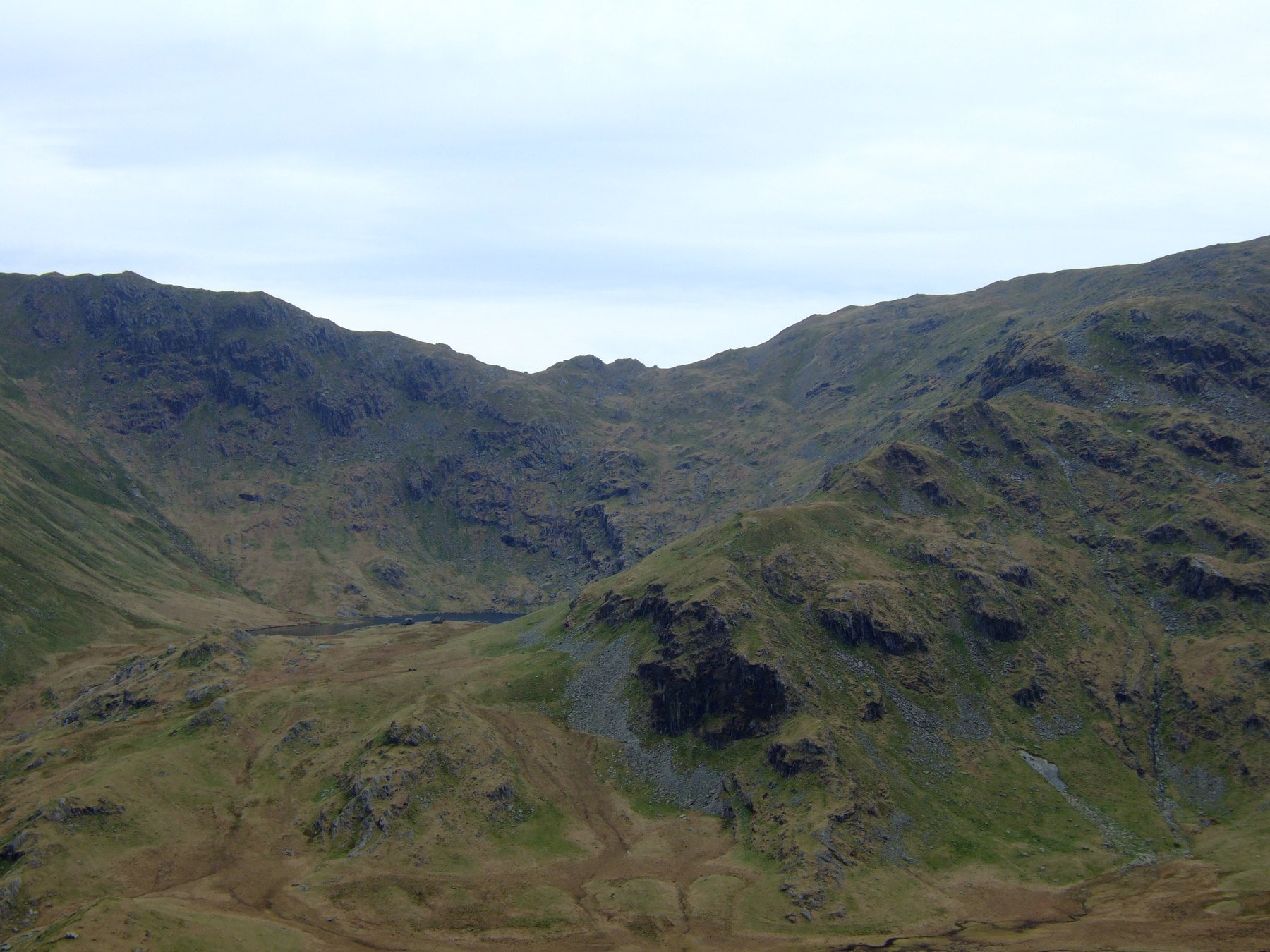 The tarns of Small Water and Blea Water looked fantastic. Deep blue, almost black water nestled in their bowls high up on the fells. A perfect spot for a wild camp later in the summer maybe. 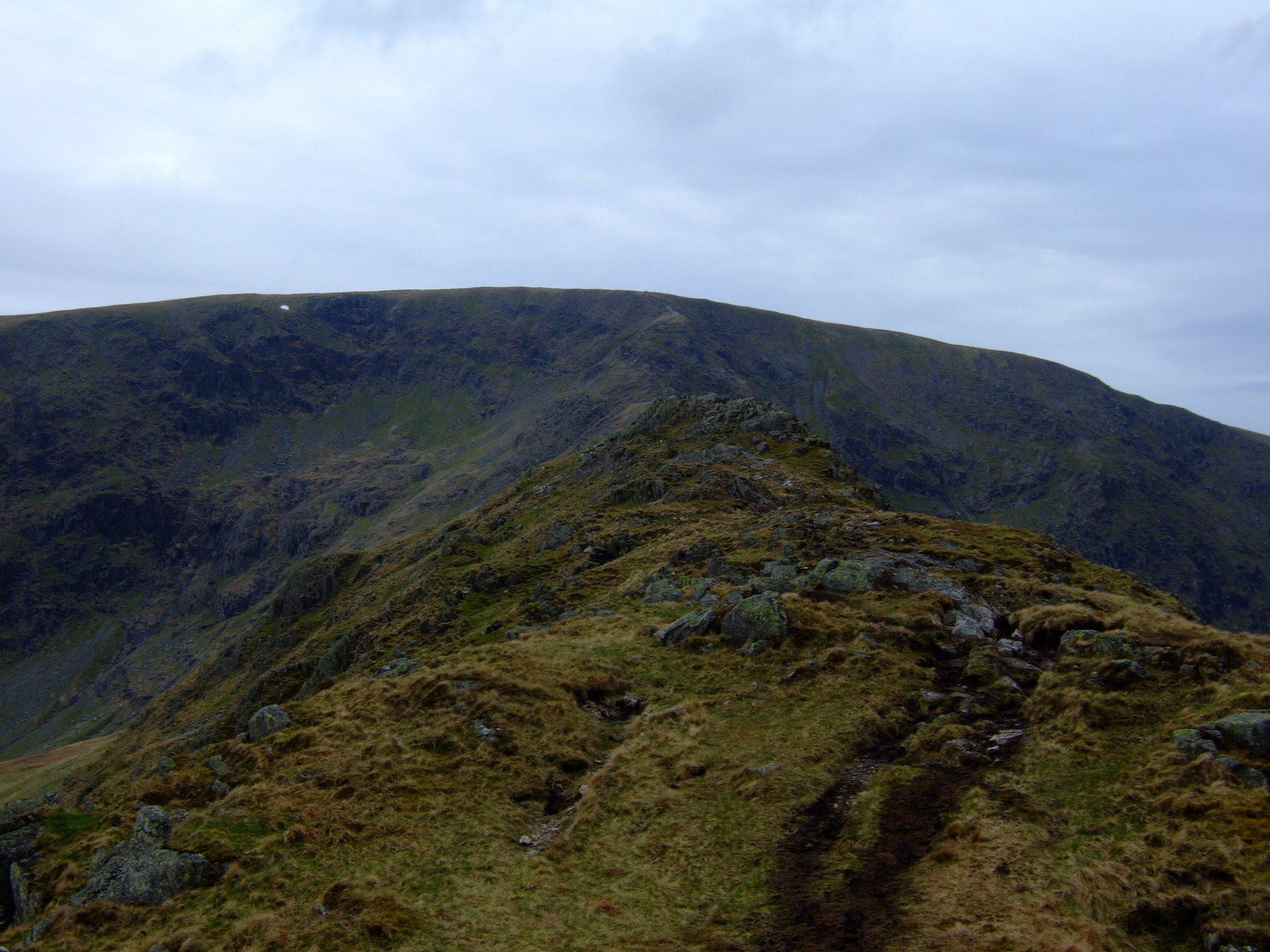 The ridge has a number of ups and downs, but I soon came to the little cairn that marks the high point of Rough Crag. The view from here is awesome. The tarn of Blea Water nestles in the bowl of hills created by High Street and Mardale Ill Bell and you’re surrounded by craggy hills and ridges. 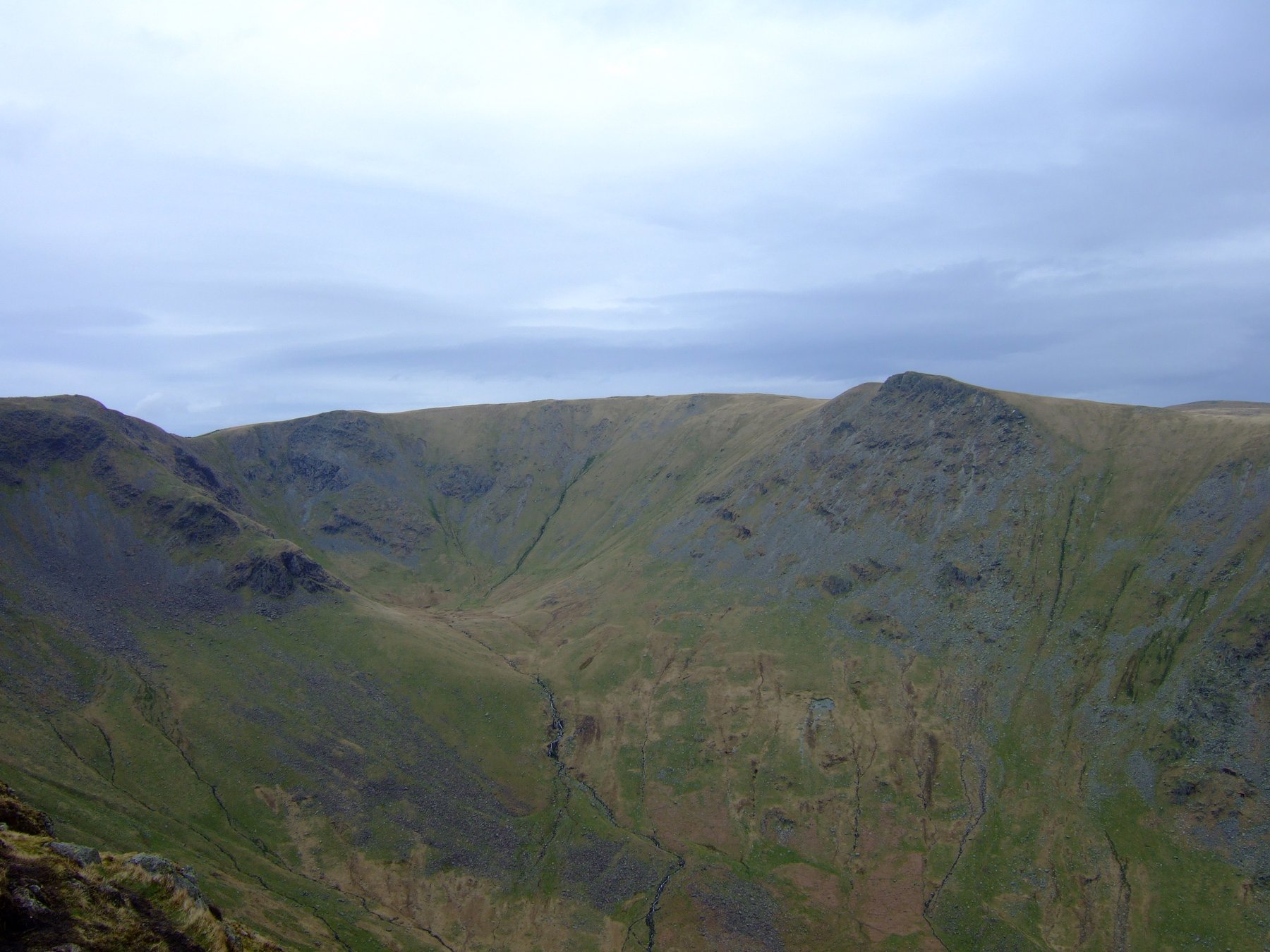 Short Stile (left) and Kidsty Pike – the hollow between them is called Sale Pot, the head of Riggindale Beck springs from the back wall. 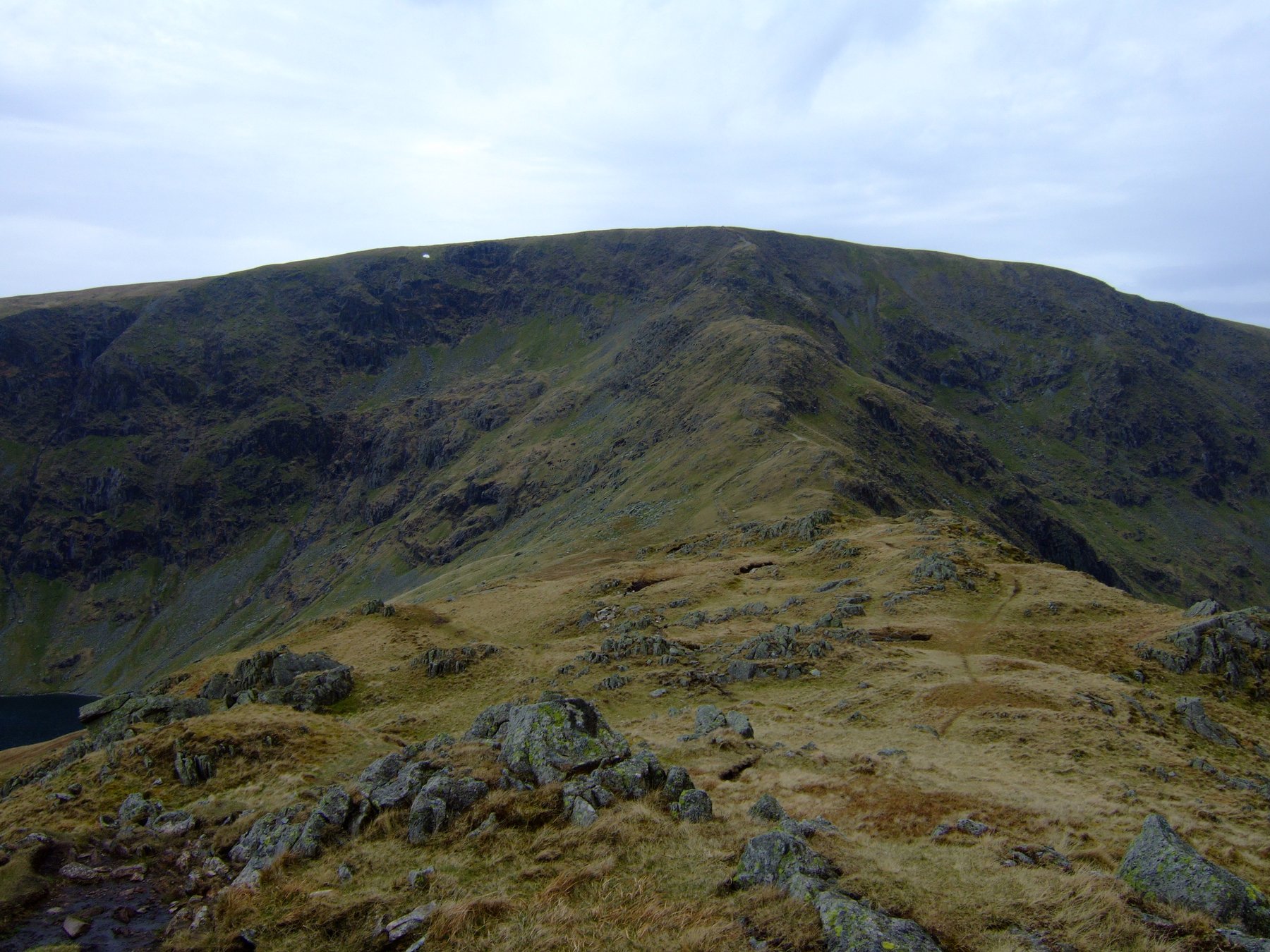 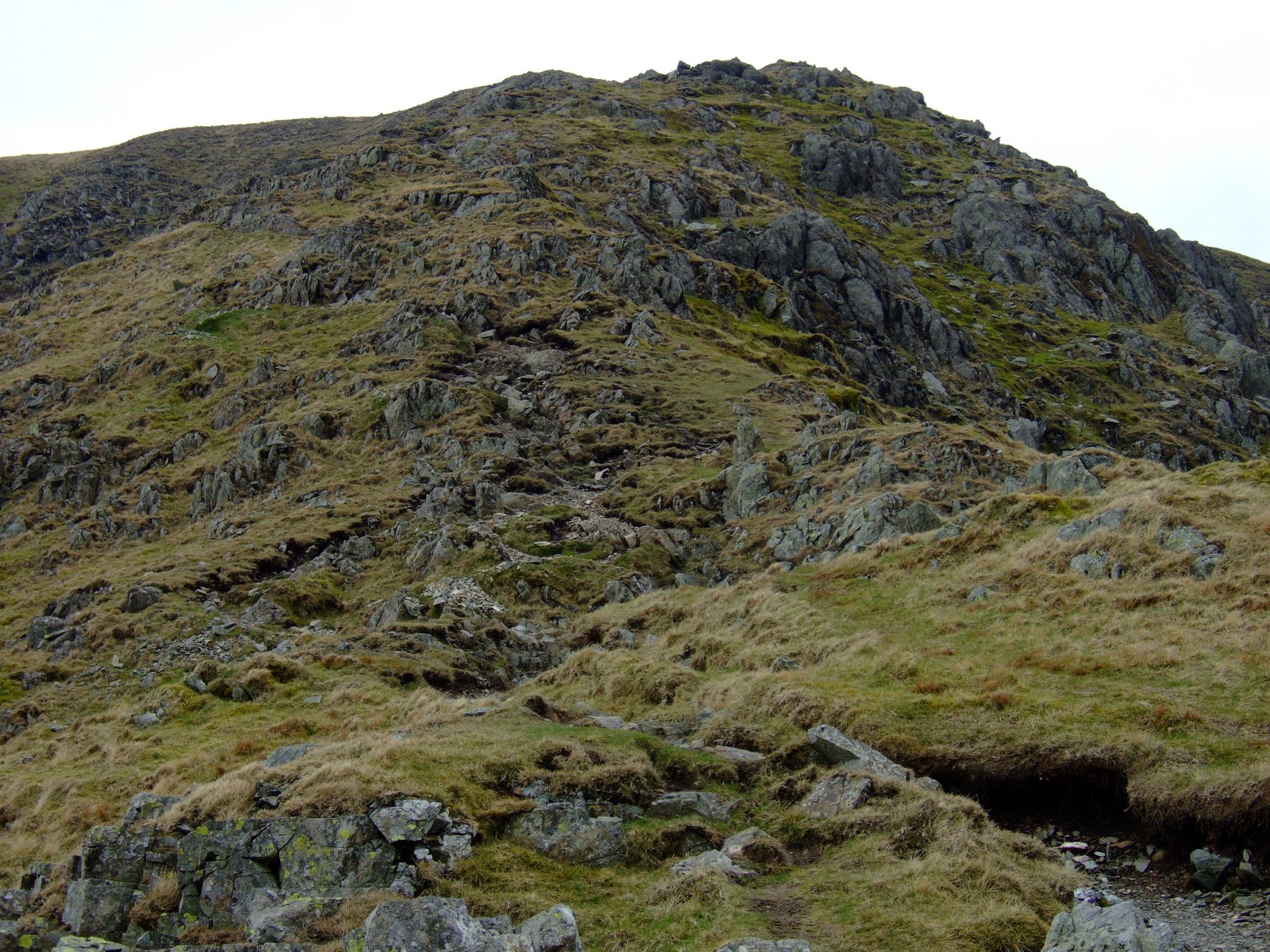 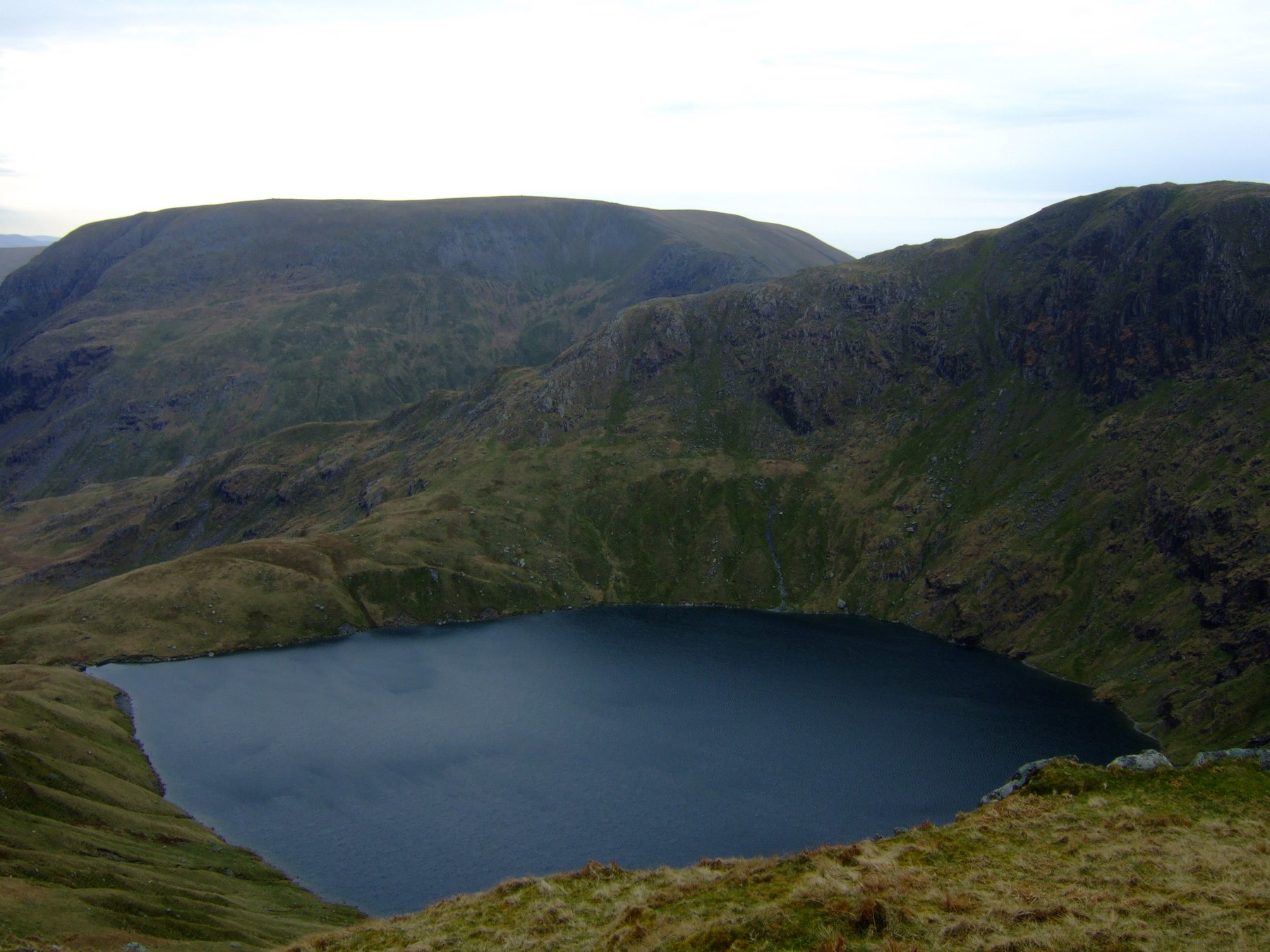 The last climb, up Long Stile to High Street is quite steep, but the path is clear and easy to follow and it doesn’t take long to reach the grassy summit of High Street. I found the little patch of snow just below the lip of the summit of High Street. I’d seen this from the road as I drove in and was quite surprised to see snow still lingering even in this sheltered spot. 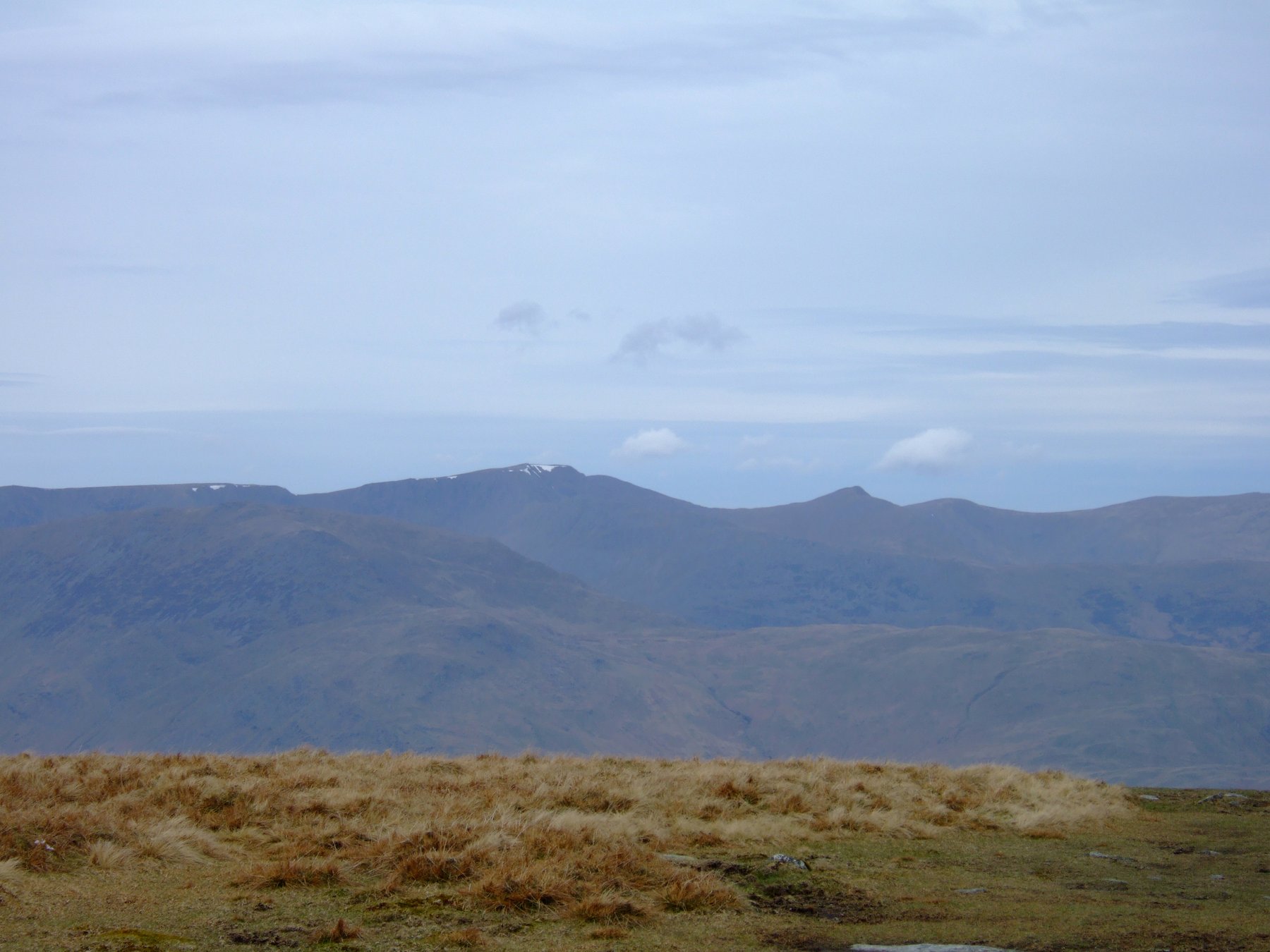 Snow still lingering on Helvellyn too Looking down High Street towards the Straits of Riggindale 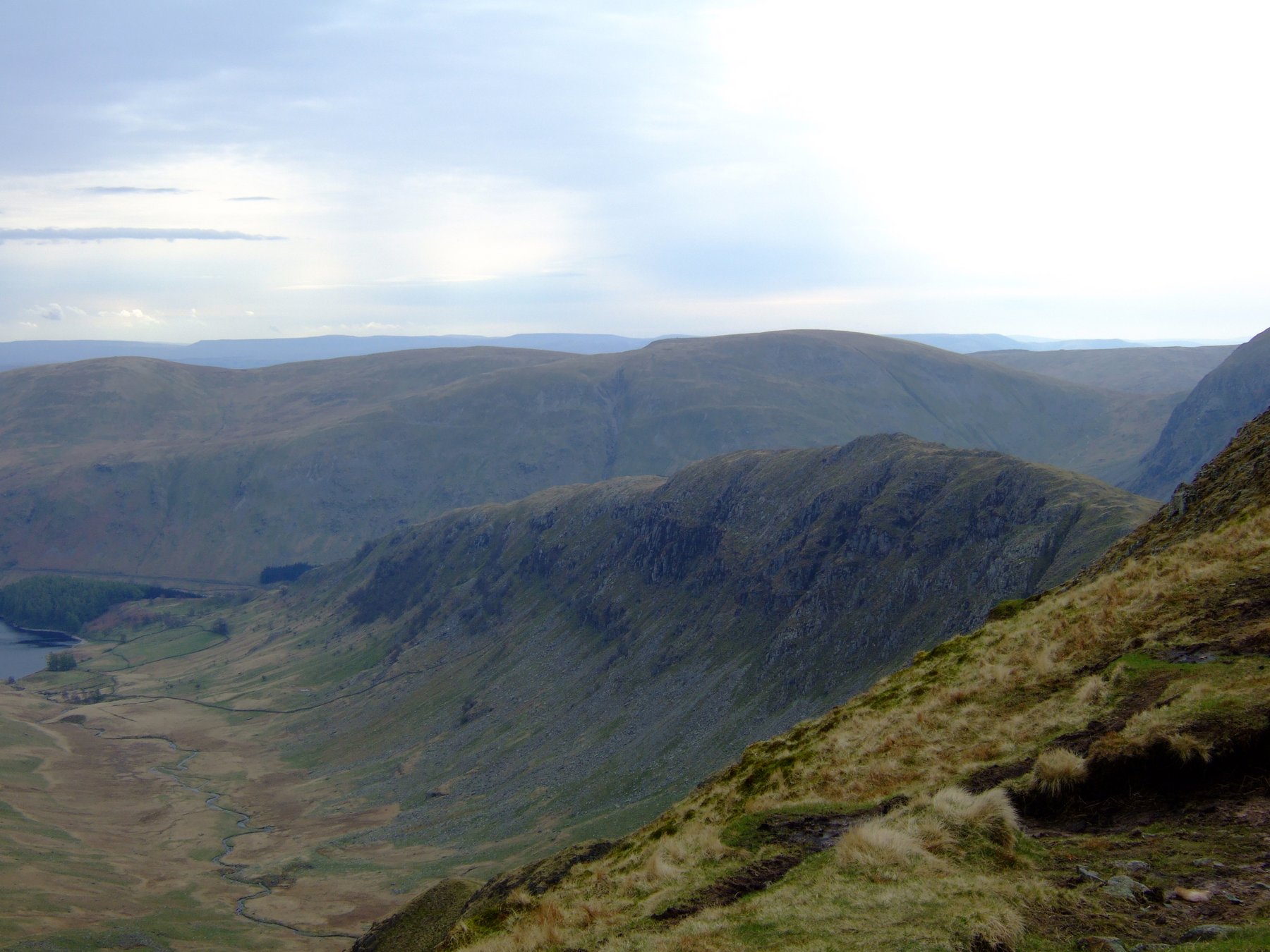 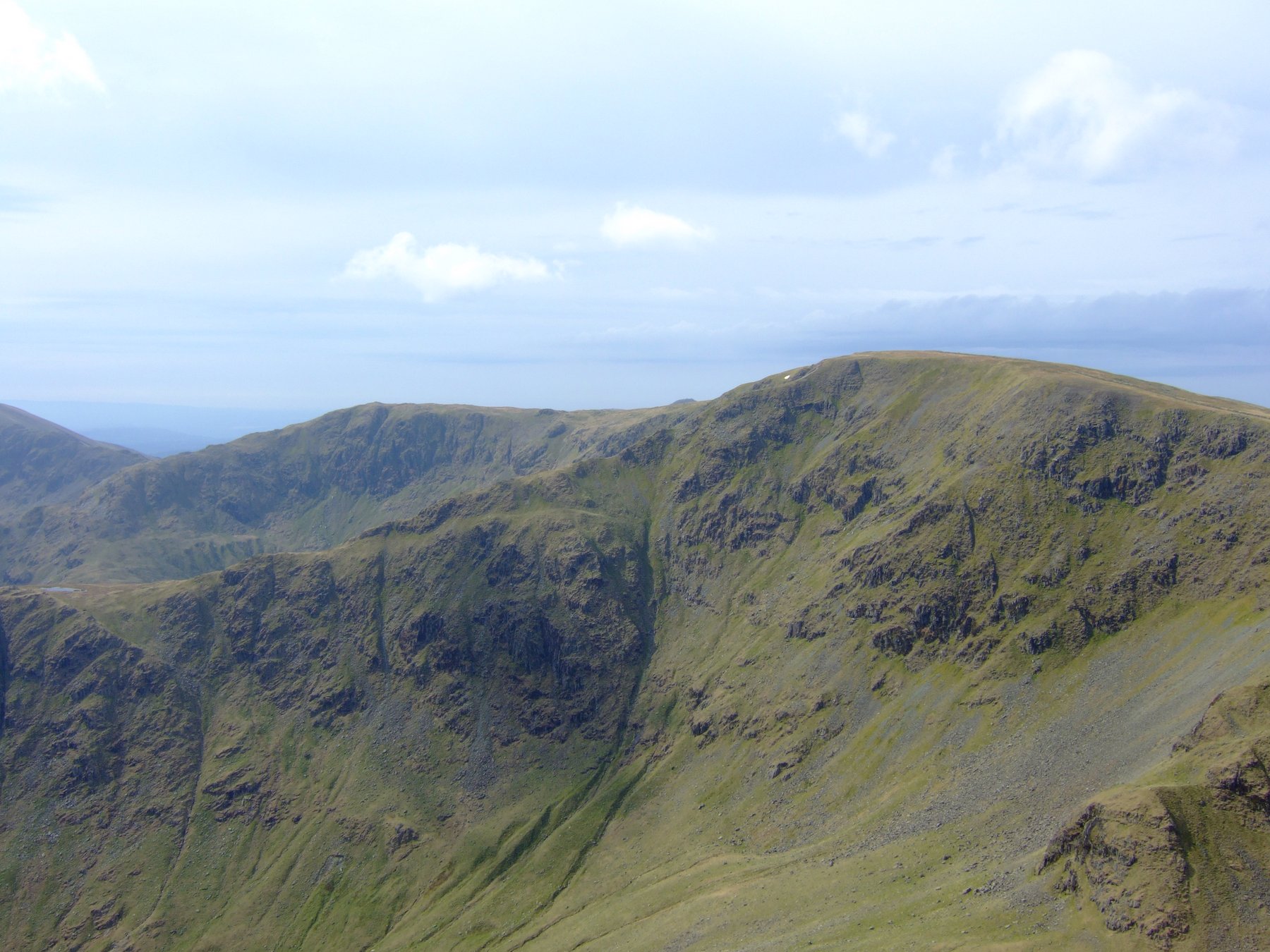 As I approached Kidsty Pike I could see lots of fell runners crossing High Raise and running across towards me. There was an orienteering flag and stamp just below the cairn on the summit and they were all heading over to get their cards marked, before haring off towards the Straits of Riggindale. I can only shake my head at fell runners, mad sods the lot if them. 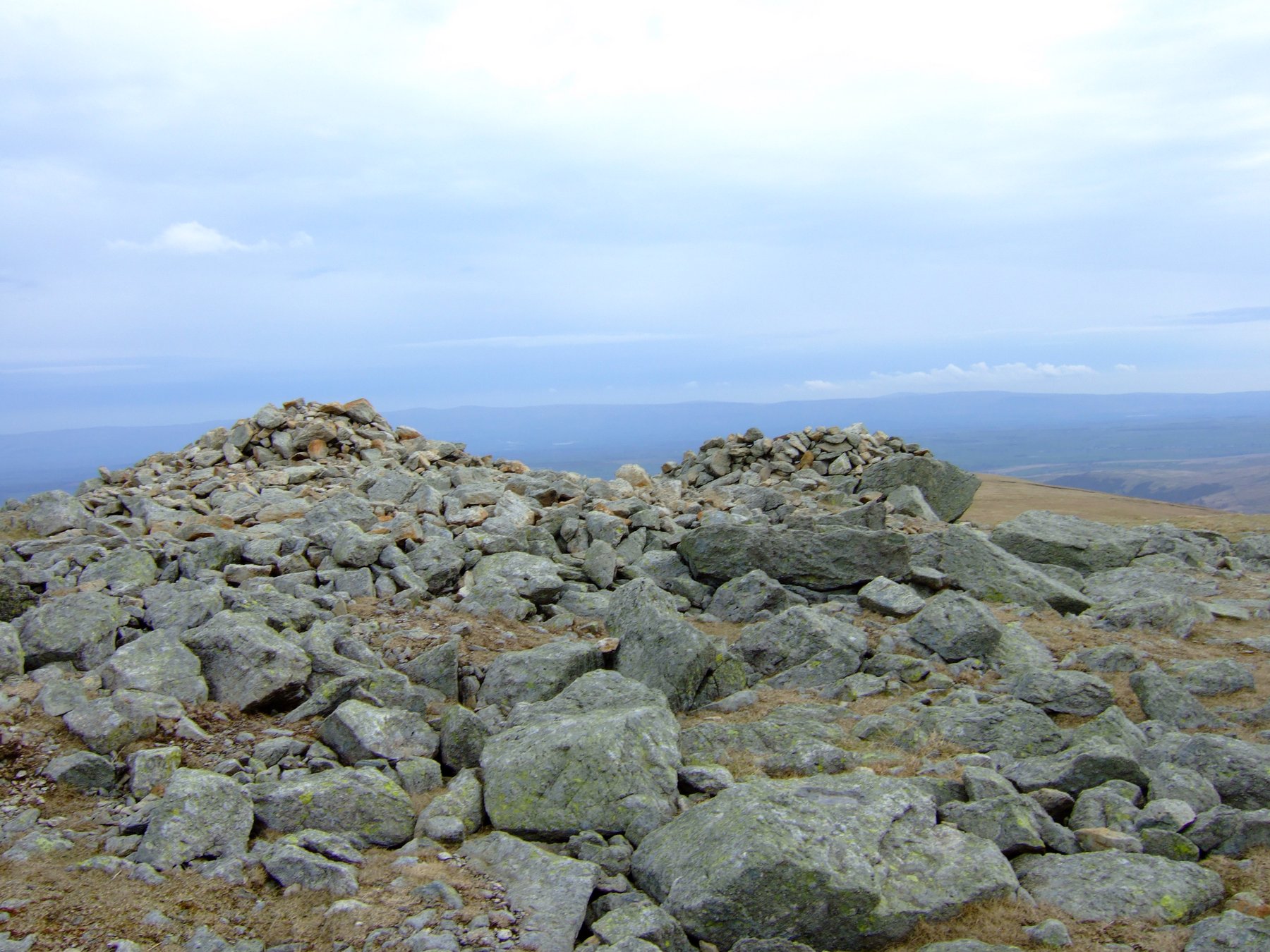 I took shelter from the wind on the summit of High Raise and sat for a few minutes eating my raisins and a flapjack bar. The rest of the walk, down to the lakeside path, was exposed and likely to be quite windy, so I took the respite while I could. 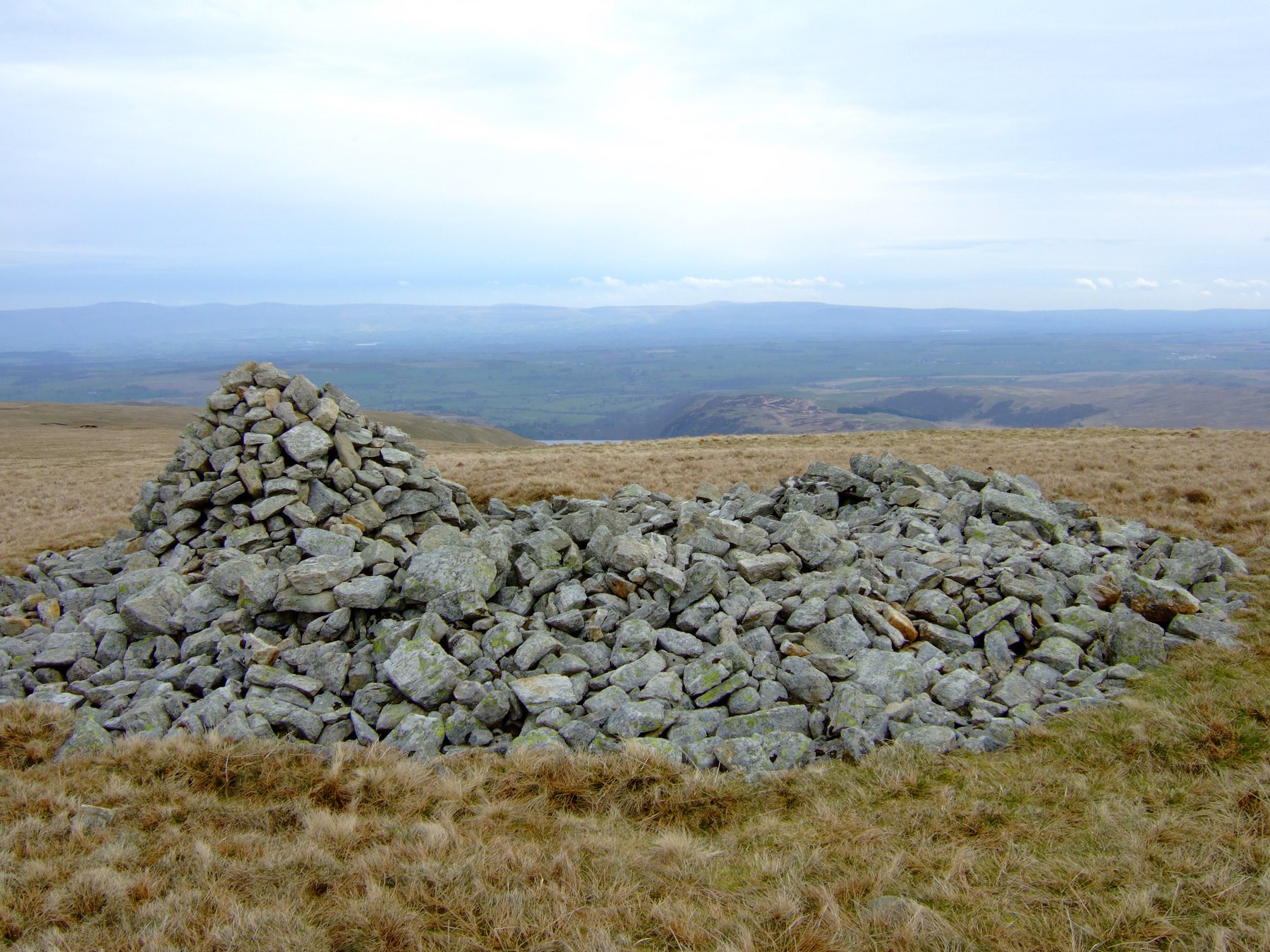 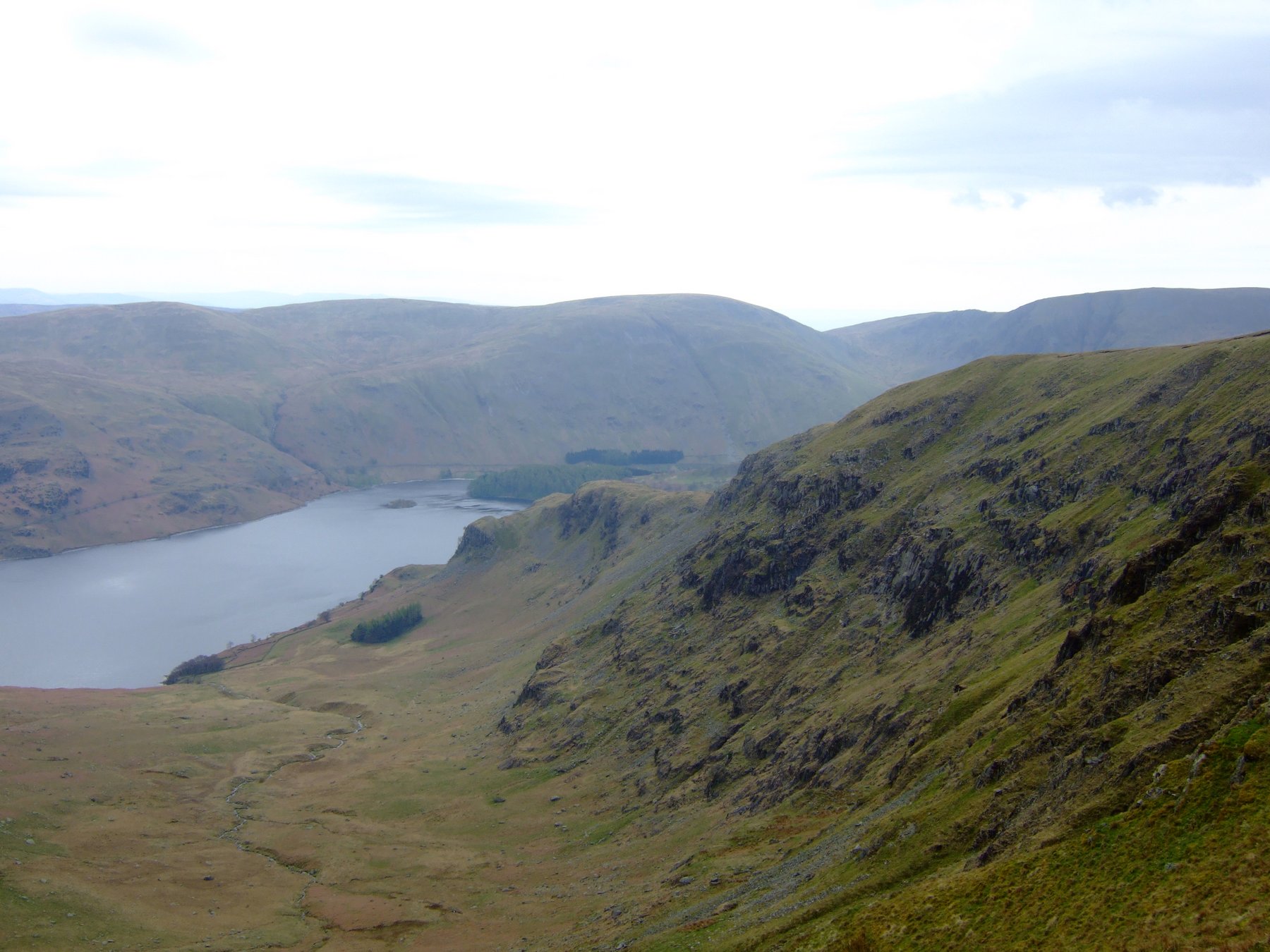 Although the map shows no path along this section of the walk (from Low Raise, and along Long Grain) I managed to follow a farmers quad bike track all the way down to the footbridge at Fordingdale Bottom. This is peat country and the walking could get a bit wet underfoot I imagine, but today wasn’t too bad. In my Inov-8’s I got wet feet of course. 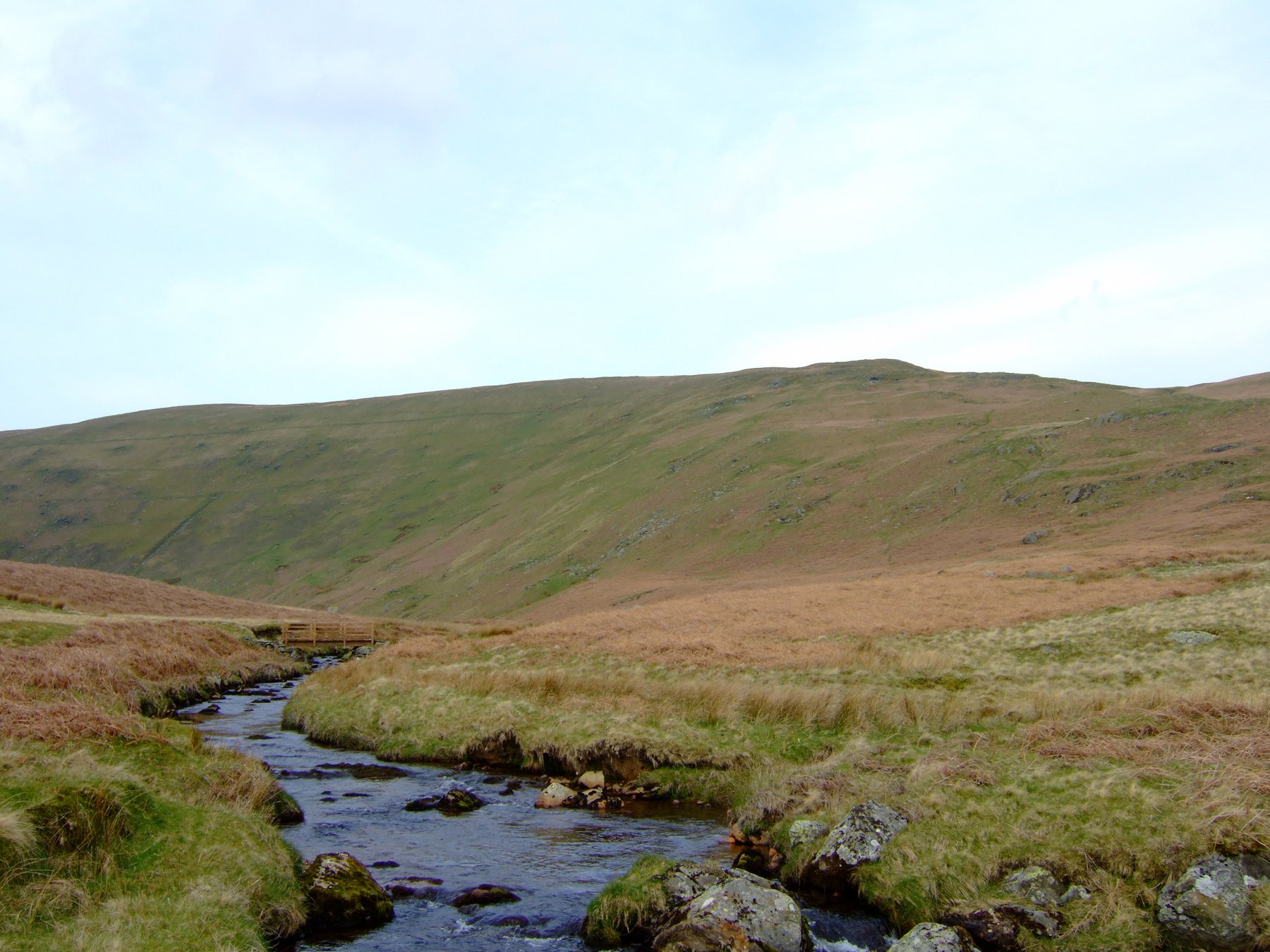 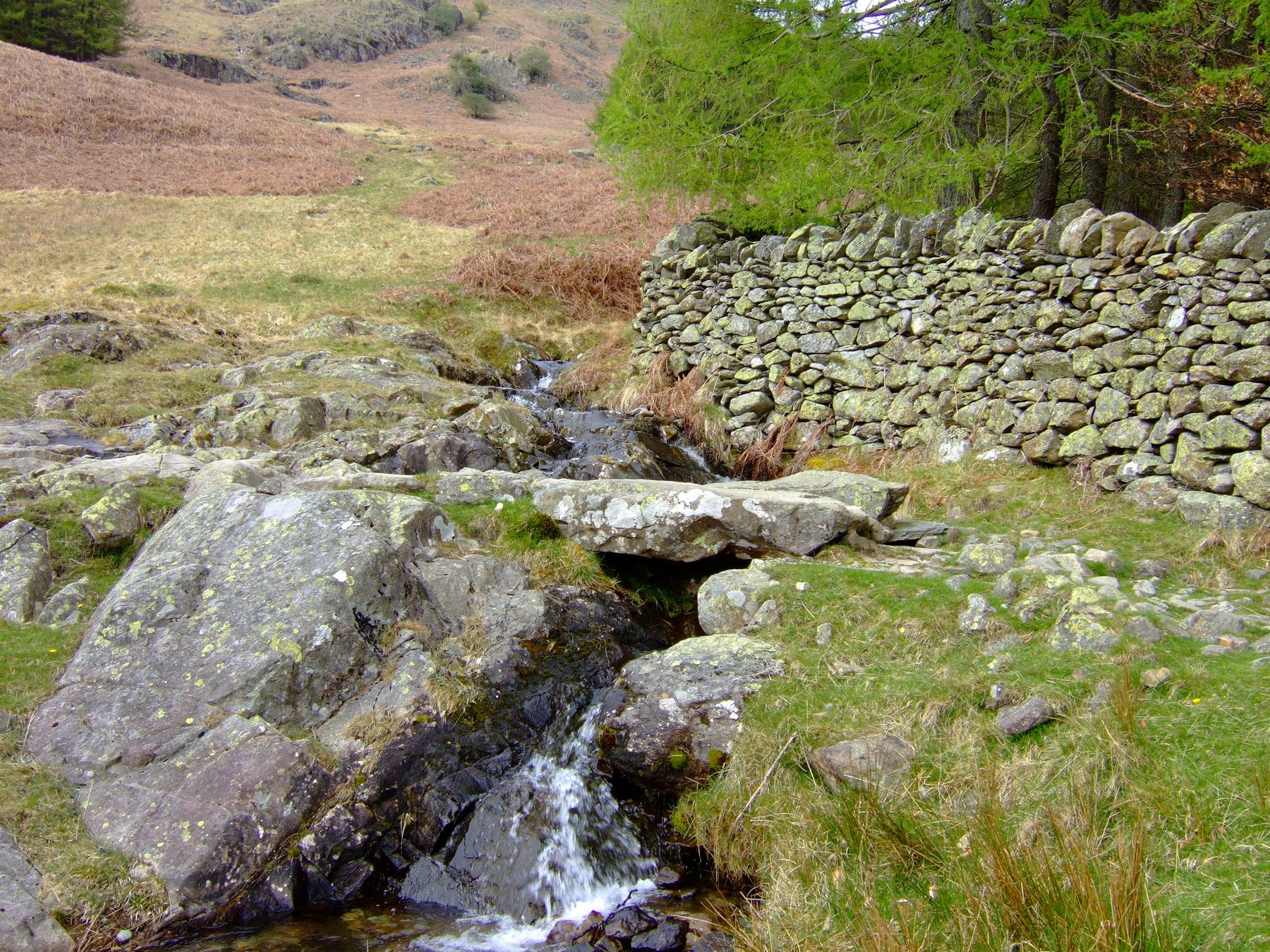 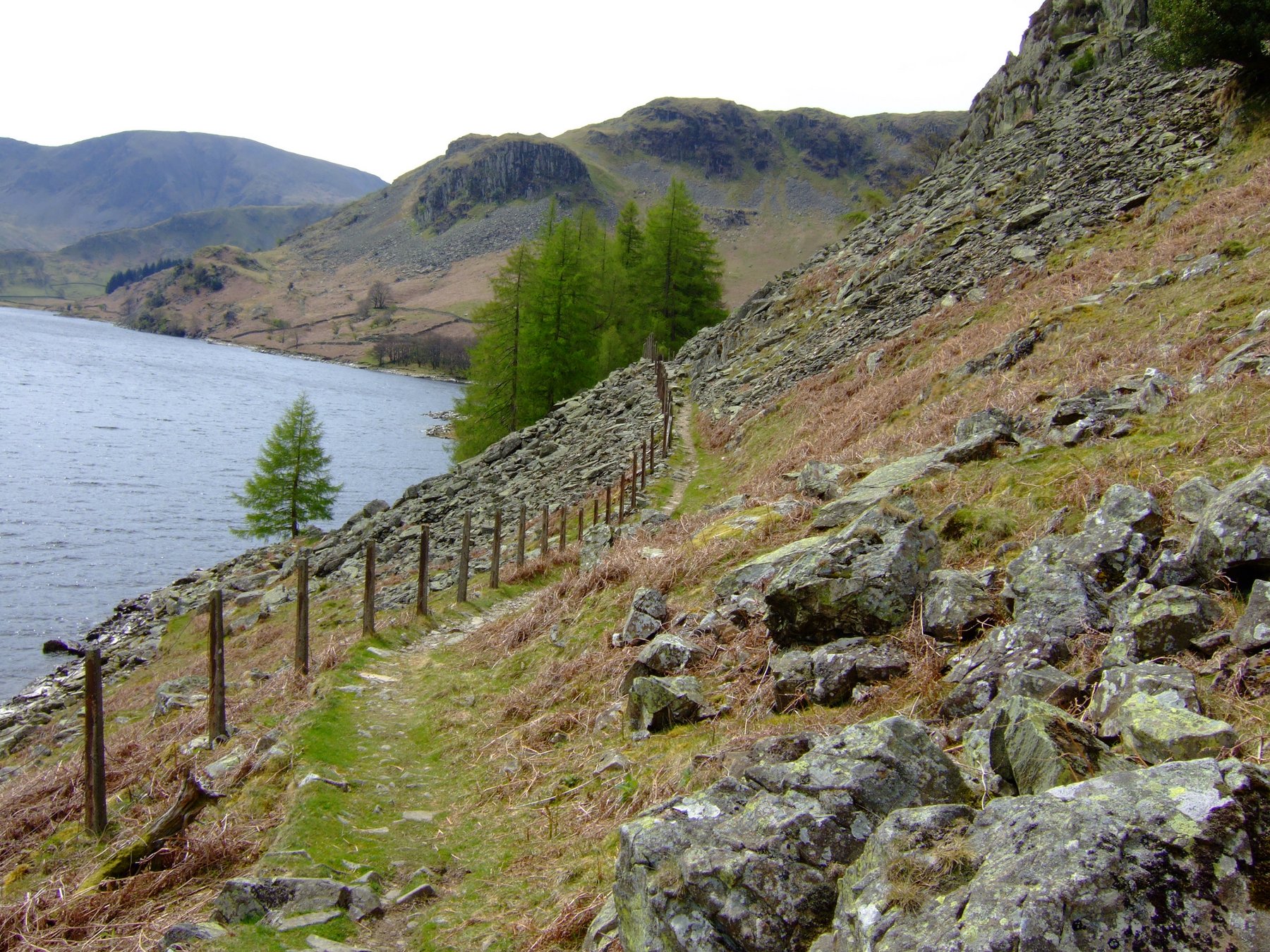 The path beside Haweswater, Birks Crag forms the backdrop 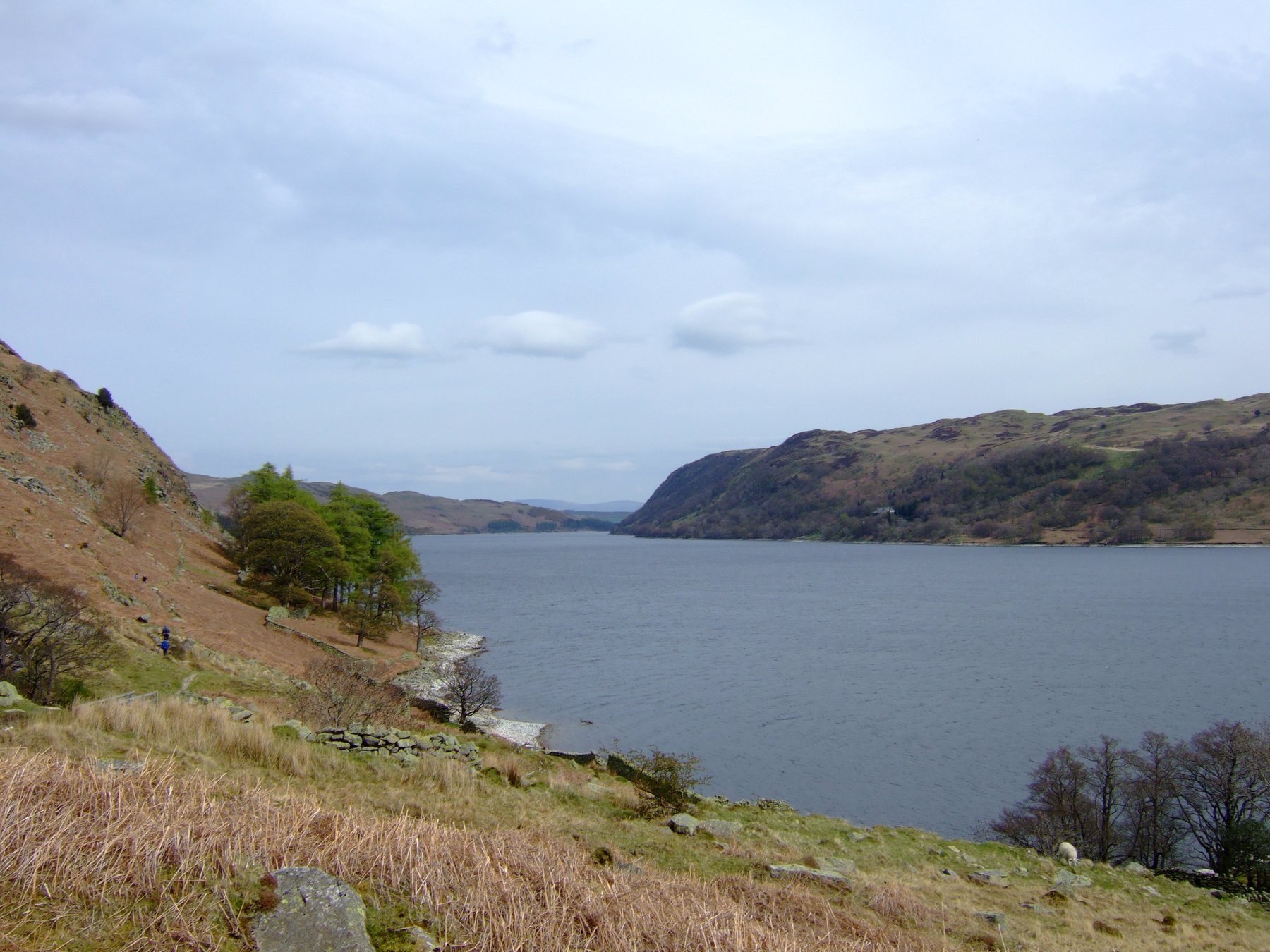 Looking back along Haweswater 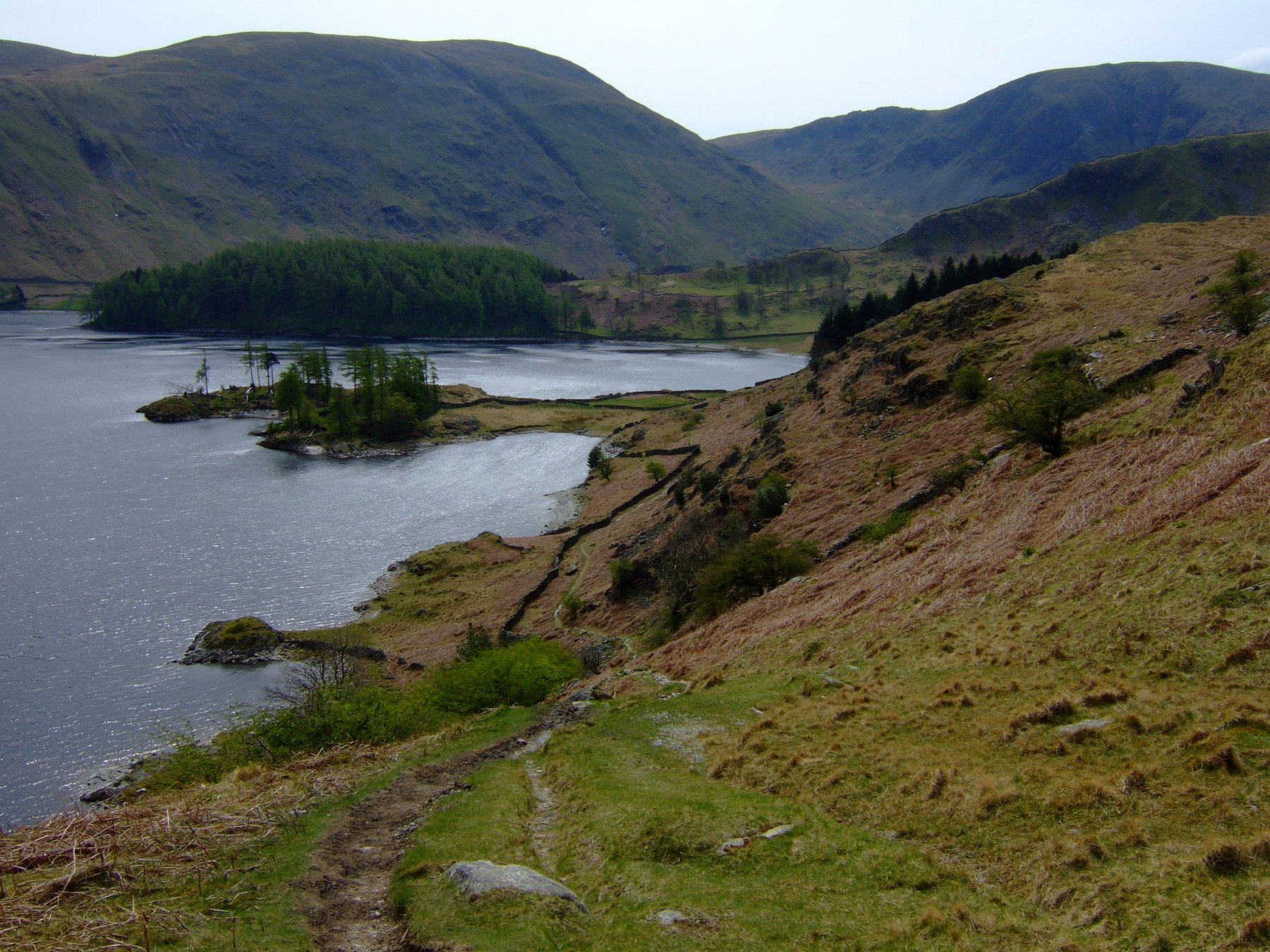 The path beside Haweswater, Speaking Crag sticking out into the lake 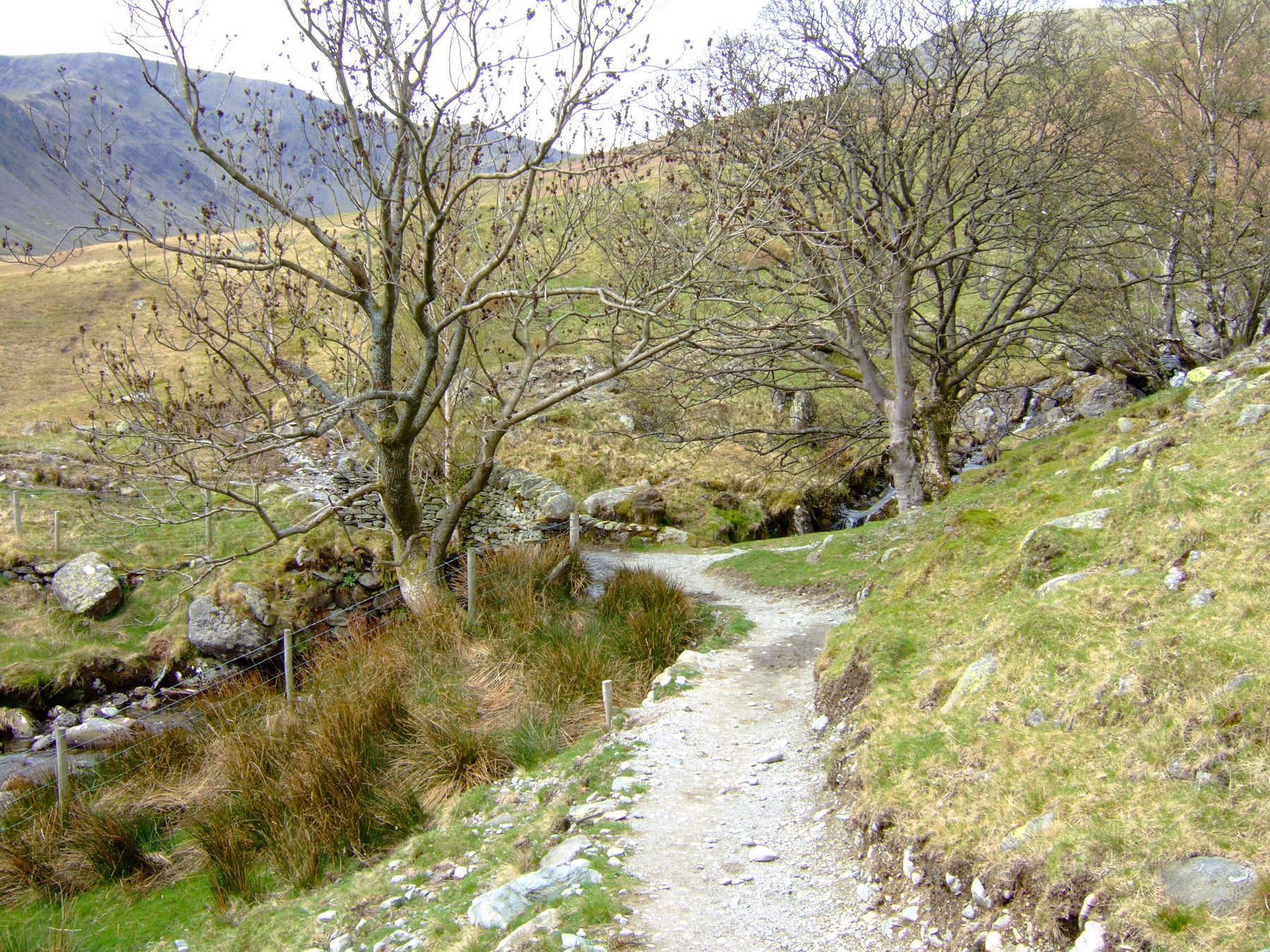 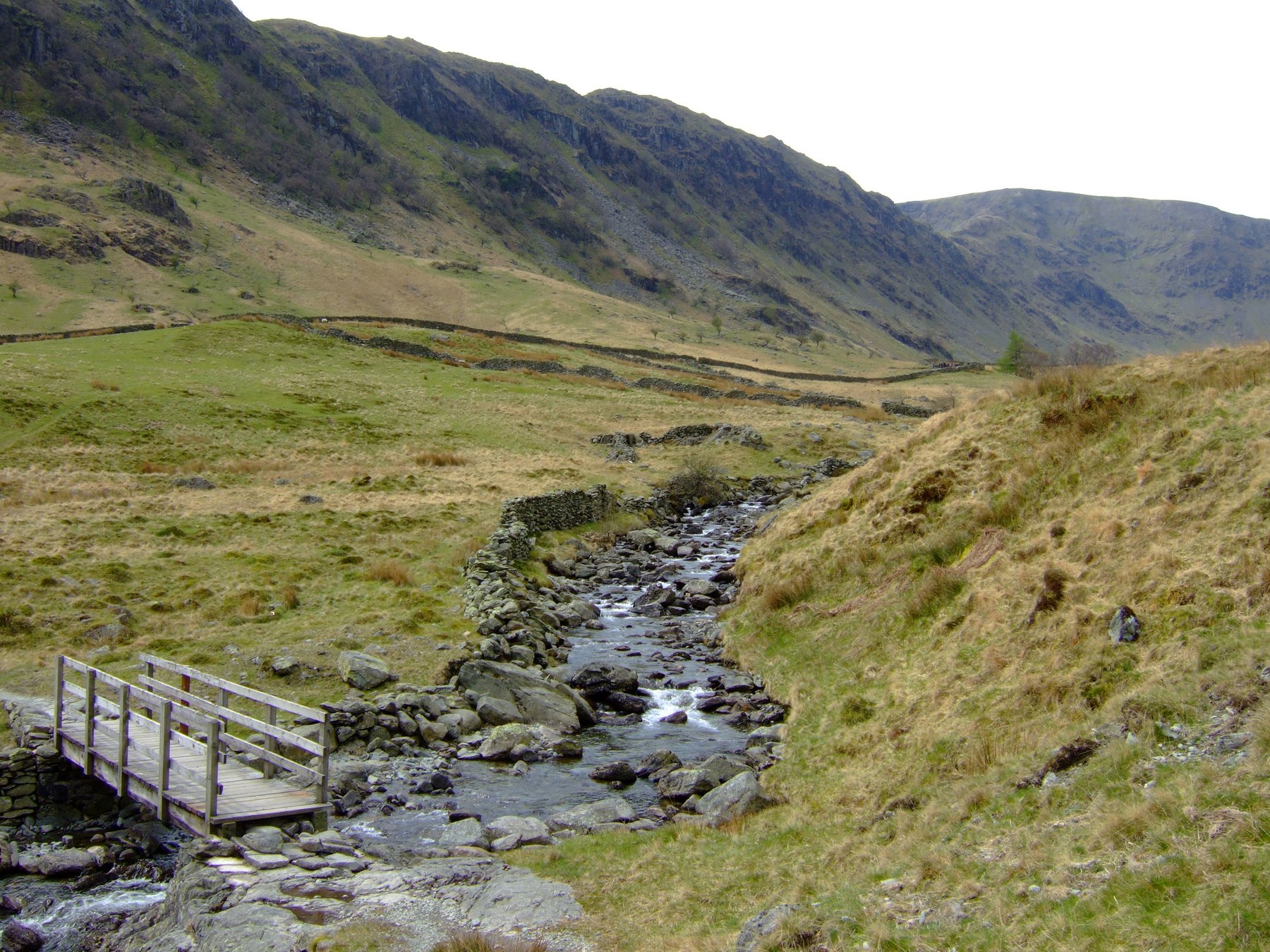 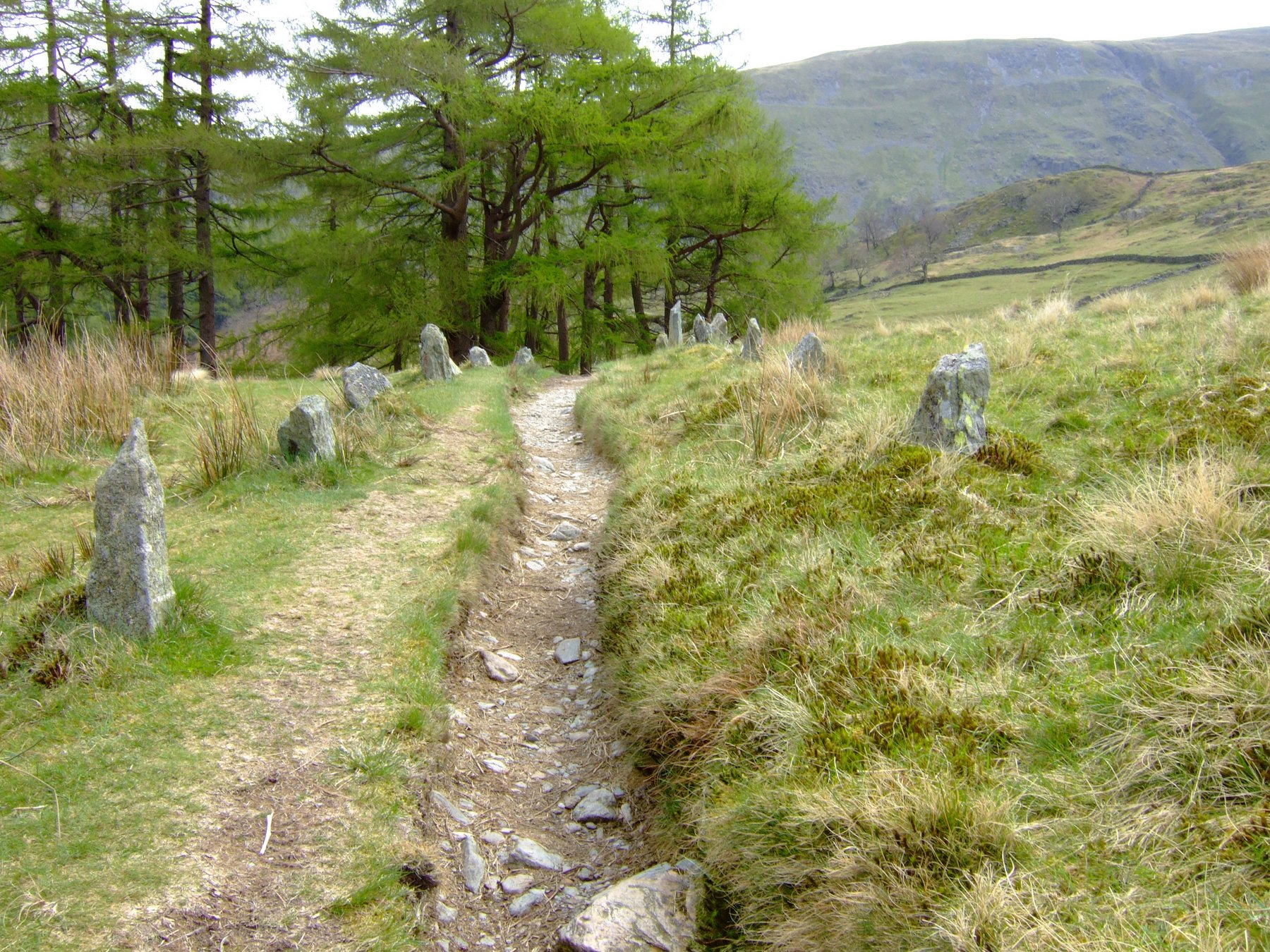 The return path beside Haweswater was a lovely as I remember it being when I did the Coast to Coast and the weather had improved significantly from this morning. I managed to remove my coat and if I could have been bothered to stop again a little later I could have removed my fleece too.

I met dozens of people coming the other way now, although I think only one group of three, semi-reluctant parents with a keen teenage daughter, were actually doing the Coast to Coast.

As usual the car park was jammed and the cars spilled for half a mile along the Haweswater road. I love arriving early!