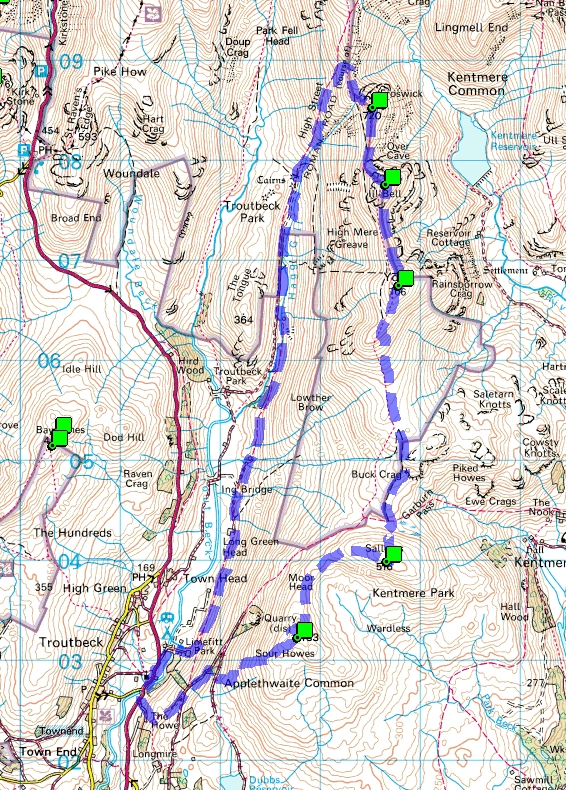 I’ve decided to apply a bit of logic to the way I bag the Wainwrights, I’ve broken them down into the seven regions AW defined and I’m going to work my way across the Lakes from east to west, mainly because that fits in with the Pictorial Guides I’ve got. I don’t own them all yet. I originally bought the Southern Fells on eBay two or three years ago and although these are seminal works by a true artist, they are not the easiest books to follow in terms of the mapping. They are also quite expensive, even on eBay, often going for more than they cost on Amazon for a new one.

I was quite excited then, to see a revised edition of the Far Eastern Fells in Waterstones a few months back and it seems that Chris Jesty is updating the books with the changes that have occurred in the landscapes, path, summits etc since the books were written by AW. The new version has much improved mapping – simply by the addition of another colour to pick out the paths being described. The new red lines make all the difference when reading the maps. Unfortunately he is only part way through the revision process and has only completed 4 of the 7 books at this time.

So I now have the Far Eastern, Eastern and Central Fells in the new revised version, which is probably more than enough to keep me going this season. It also allows me to get to know an area quite well, rather than darting around all over the Lakes bagging the hills I know by name. It also allows you to see fells from different perspectives. Often the worst view of a fell is when you’re actually walking on it and the best way to appreciate it is by viewing it from one or other of the surrounding fells.

To this end, I visited the Ill Bell ridge and some of the nearby fells. I had a great view of the ridge the previous week from Harter Fell and Mardale Ill Bell. The distinctive three humps of the ridge were a fantastic sight, looming large over the Kentmere reservoir. I thought it would be good to walk that ridge and look back to the fells I had walked the weekend before. The best laid plans of mice eh?

I arrived early (7.15am) and parked on the road, just beyond Troutbeck church and just before the Limefitt caravan park. There is a little layby there with just enough room for two or three cars. There’s also room across the bridge opposite the church, neither of these are shown on the OS maps, so this may be useful to someone. 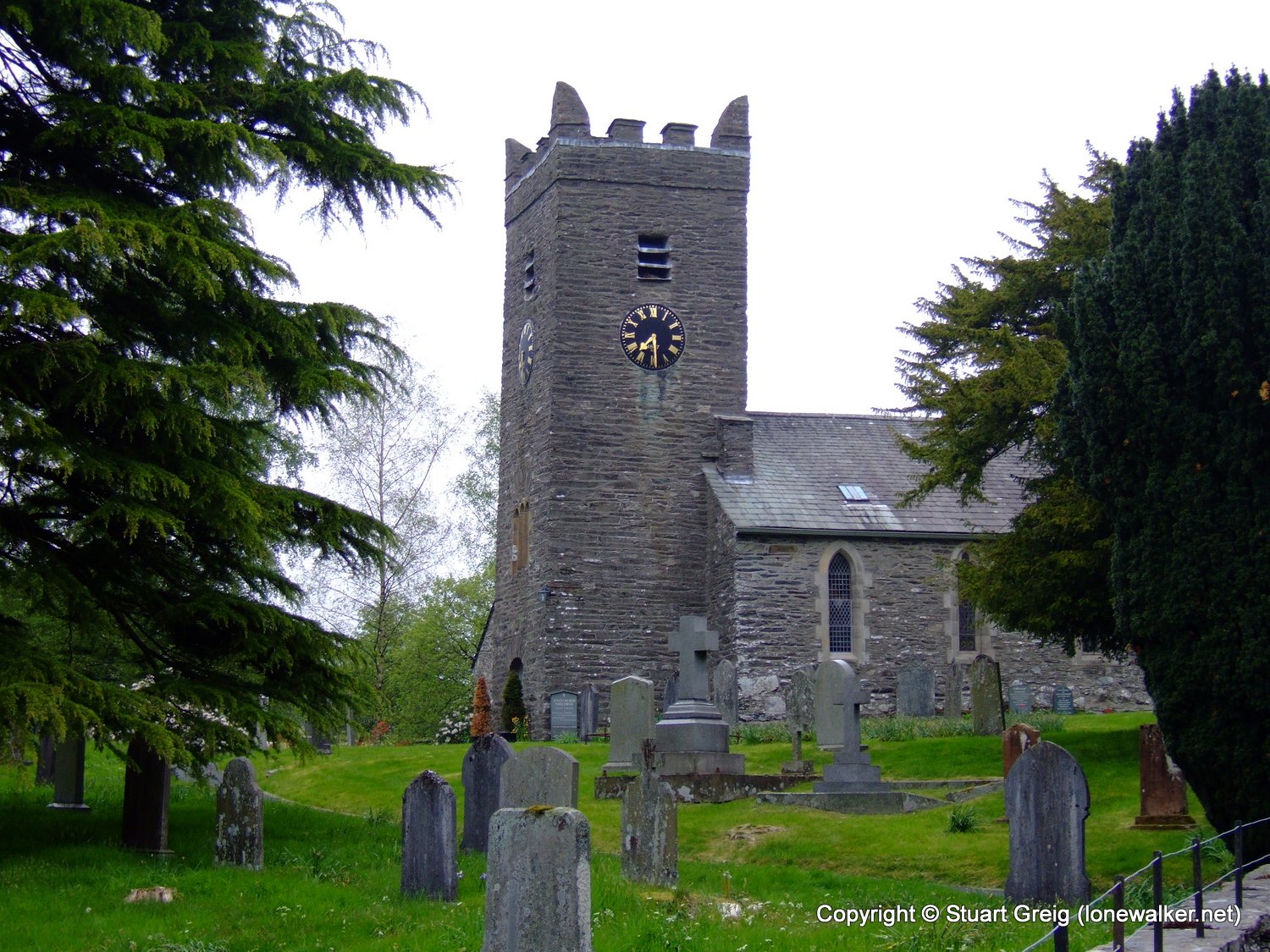 Right from the off I could tell today was going to be a bit of a disappointment compared to the last three weeks, the cloud cover was very low and all the surrounding tops were obscured, but maybe it would lift as I progressed. My first two targets for the day were fairly non-descript little fells, barely descernable from the surrounding lumps and bumps; Sour Howes and Sallows – you get the impression that these were page fillers for AW. He even says that they hold little interest for anyone other than guide book writers, but I wonder then why they are of interest to them either? 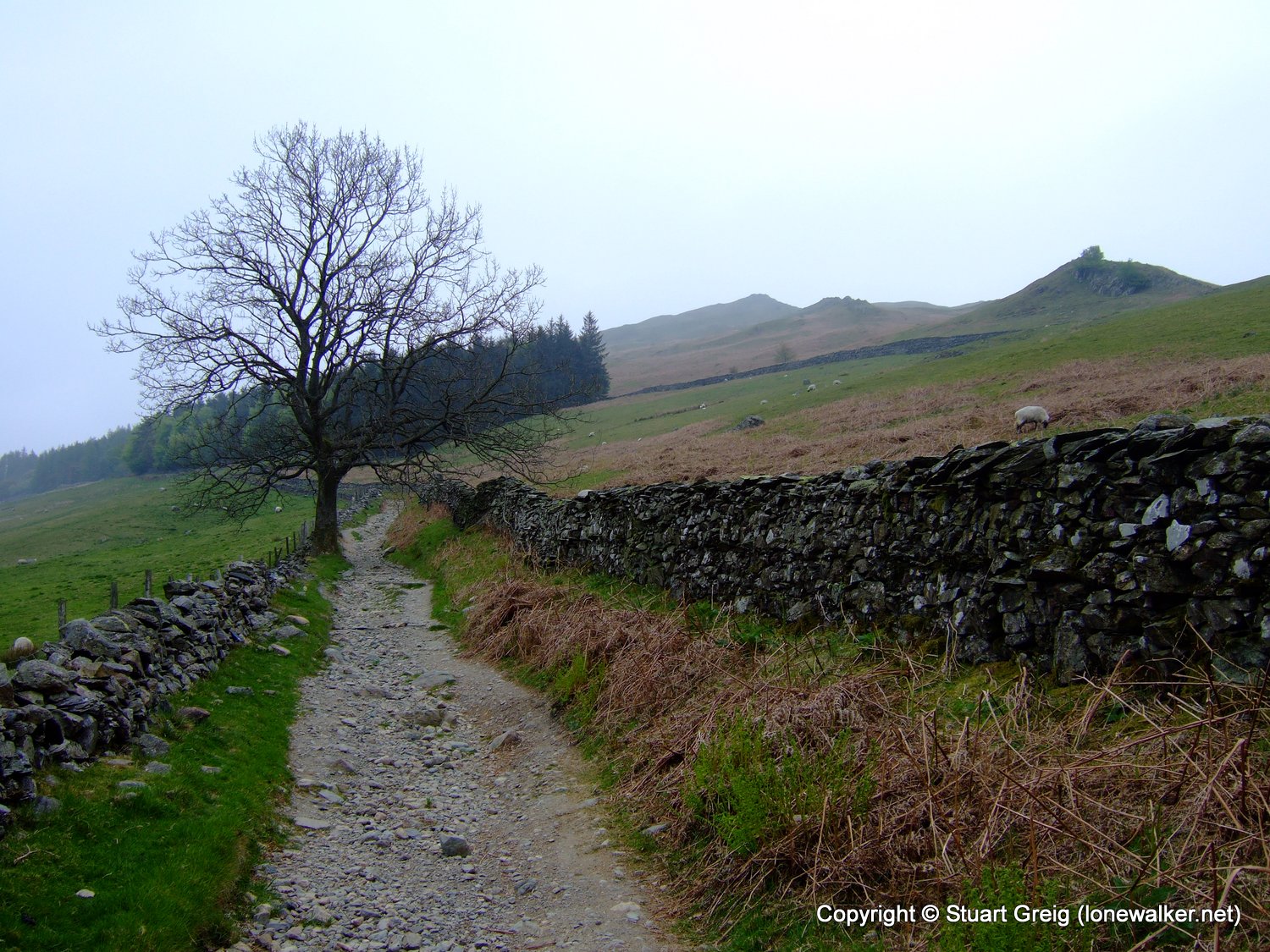 As it happens, these two fells are only a short diversion off the main track up to Garburn Pass and I’m not 100% sure I found the highpoints of either fell. There are no clear tracks across these fells and I relied almost completely on the GPS to see me through the mist to my destination. 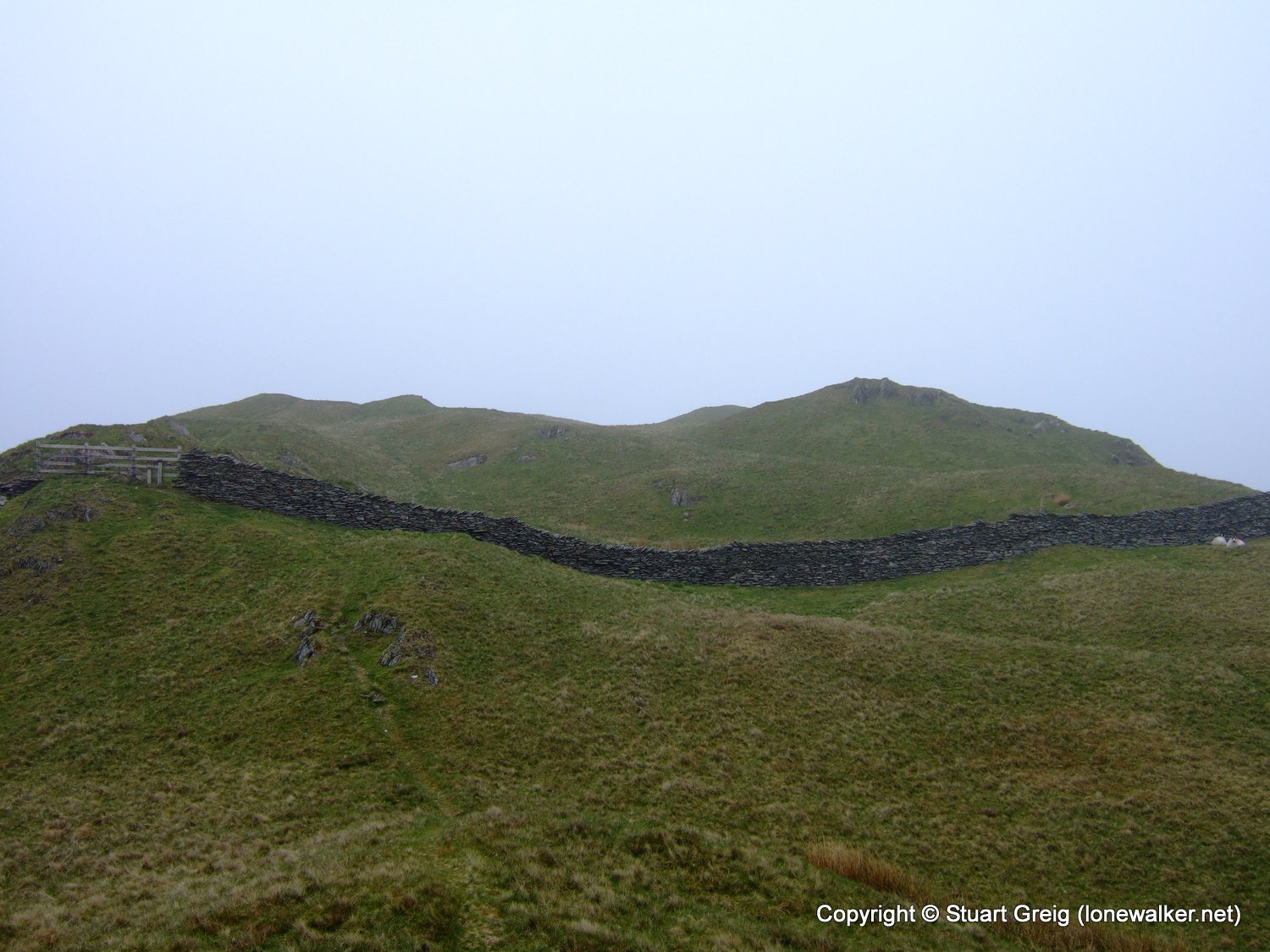 The path down from Sallows, however, gives one a good view of the Garburn Pass, at least it would have done if the cloud and mist hadn’t been reducing visibility to about 100 yards at this point.

The next section of the walk, up to the Ill Bell ridge is much easier to follow as it tracks a dry stone wall (actually a dry slate wall for much of its length) pretty much all the way, until a clear broad path is reached, from which no-one could possibly get lost. 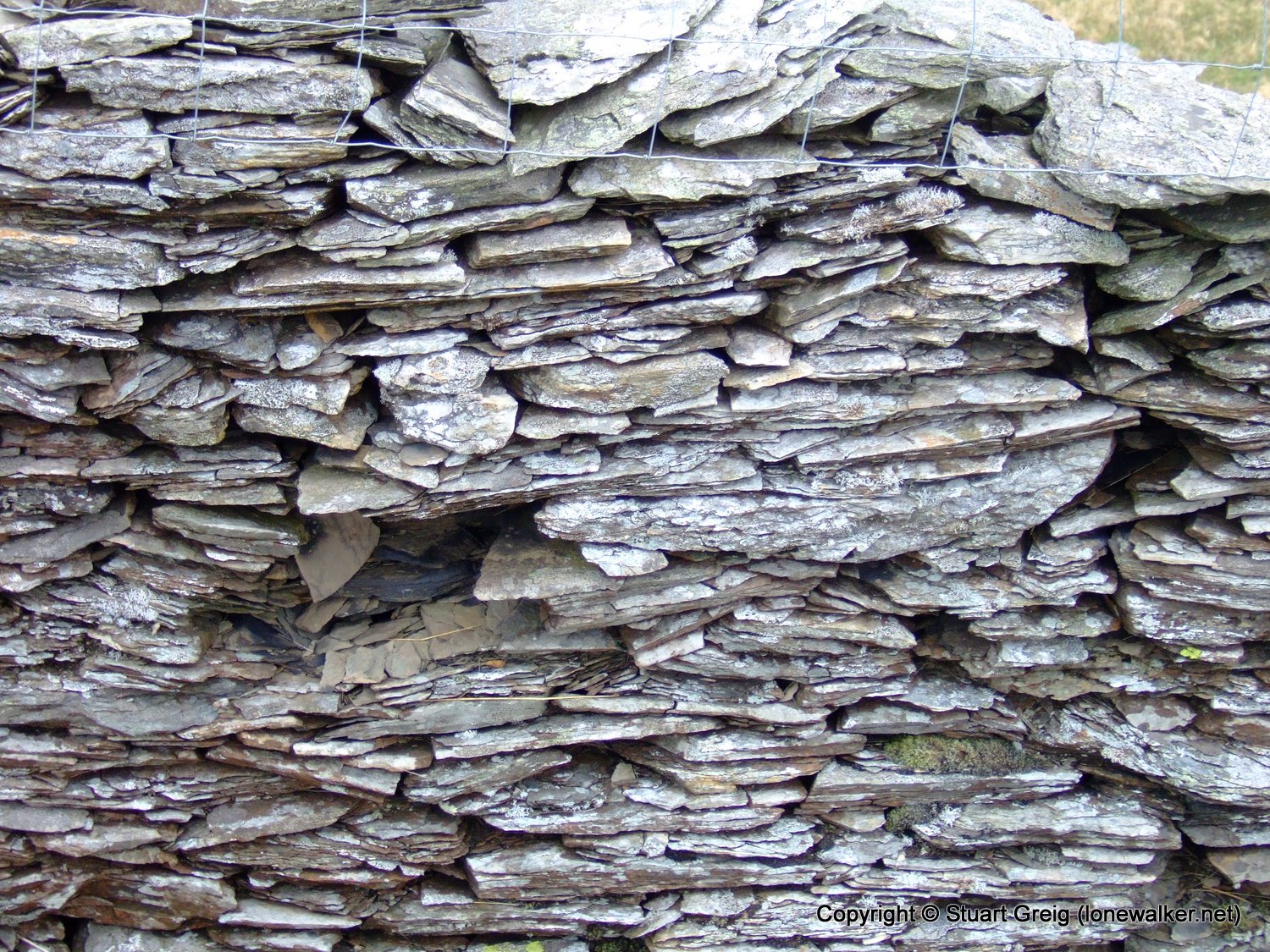 Part of this wall is very impressive, as its climbs directly over a rocky outcrop, rather than going round it. I guess the landowners were very strict about what was theirs. I couldn’t help but compare the dry stone waller to some mindless automaton, ordered to build the wall stright up that hill – no matter what gets in the way! 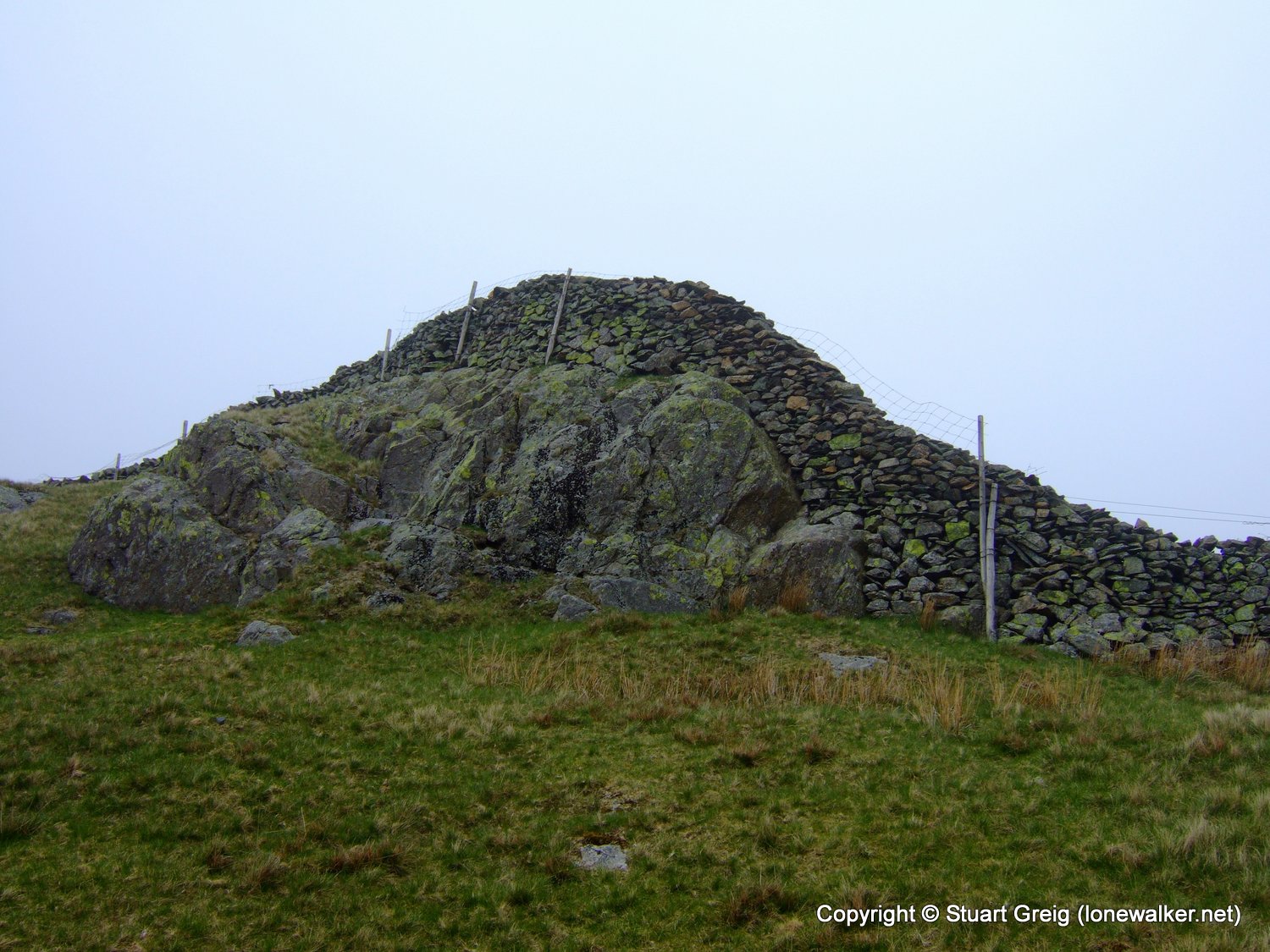 Nothing got in their way! 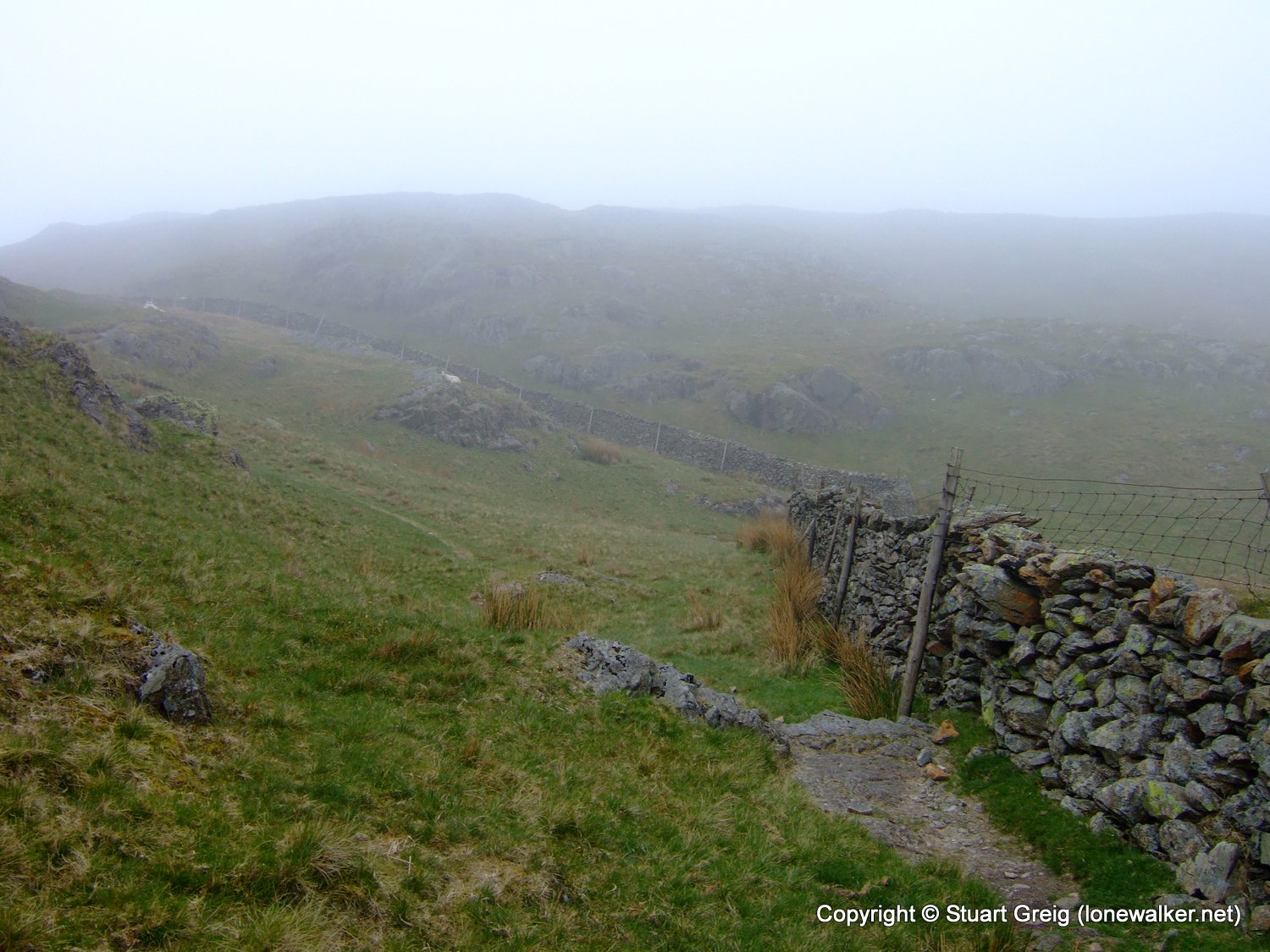 Just keep following the wall and you can’t go wrong, even on a day like today.

There has been extensive footpath renovation all the way up to and onto the Ill Bell ridge. A new gate, breaching an old dry stone wall, leads to a set of slate built steps which take you most of the way up to the summit of Yoke. From here AW promises great views of Windermere and Kentmere, but today all I could see was about 30 to 40 yards of grass and then the white mist. There was no-one around, it was very atmospheric. 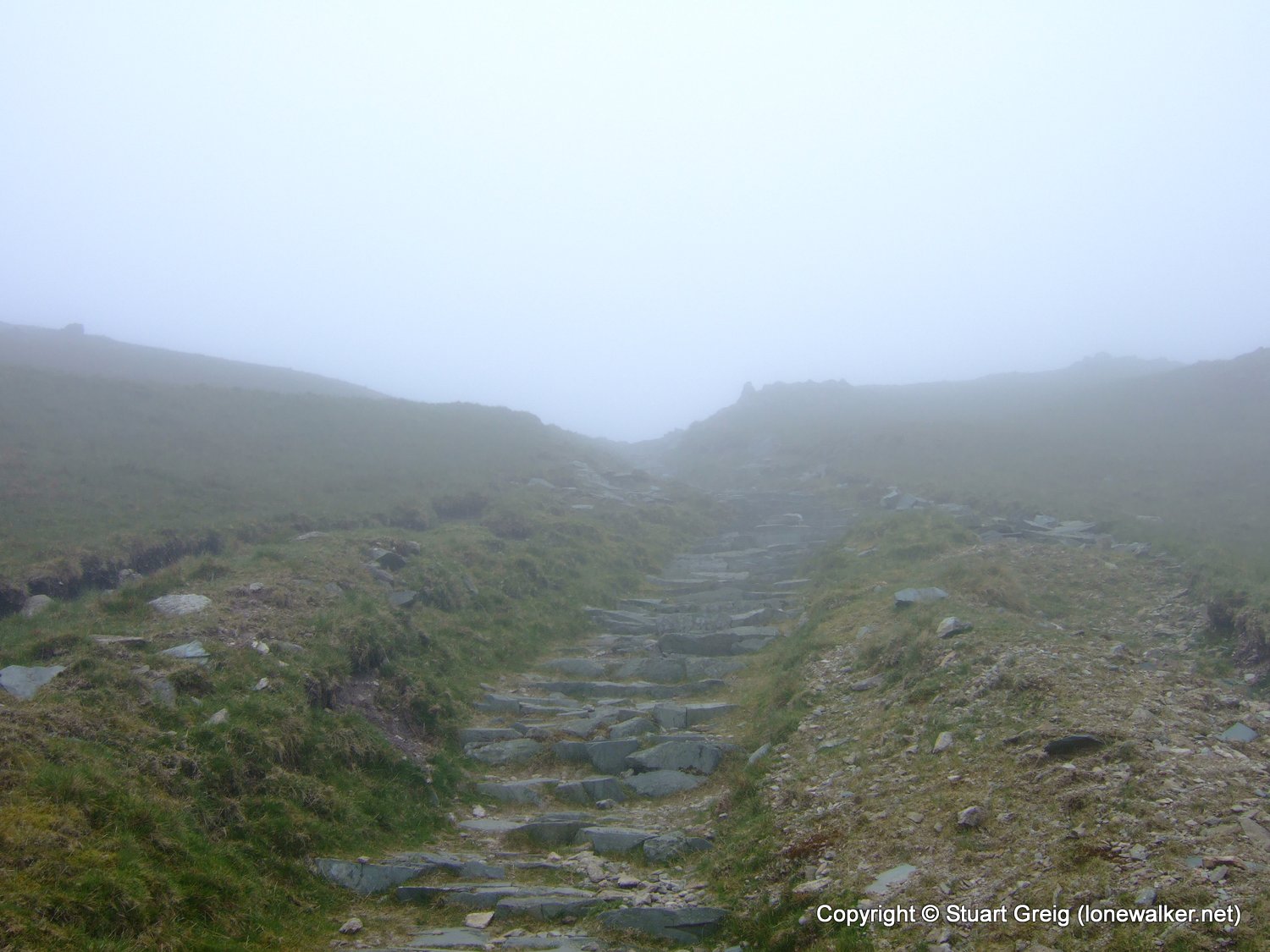 New footpath up to Yoke 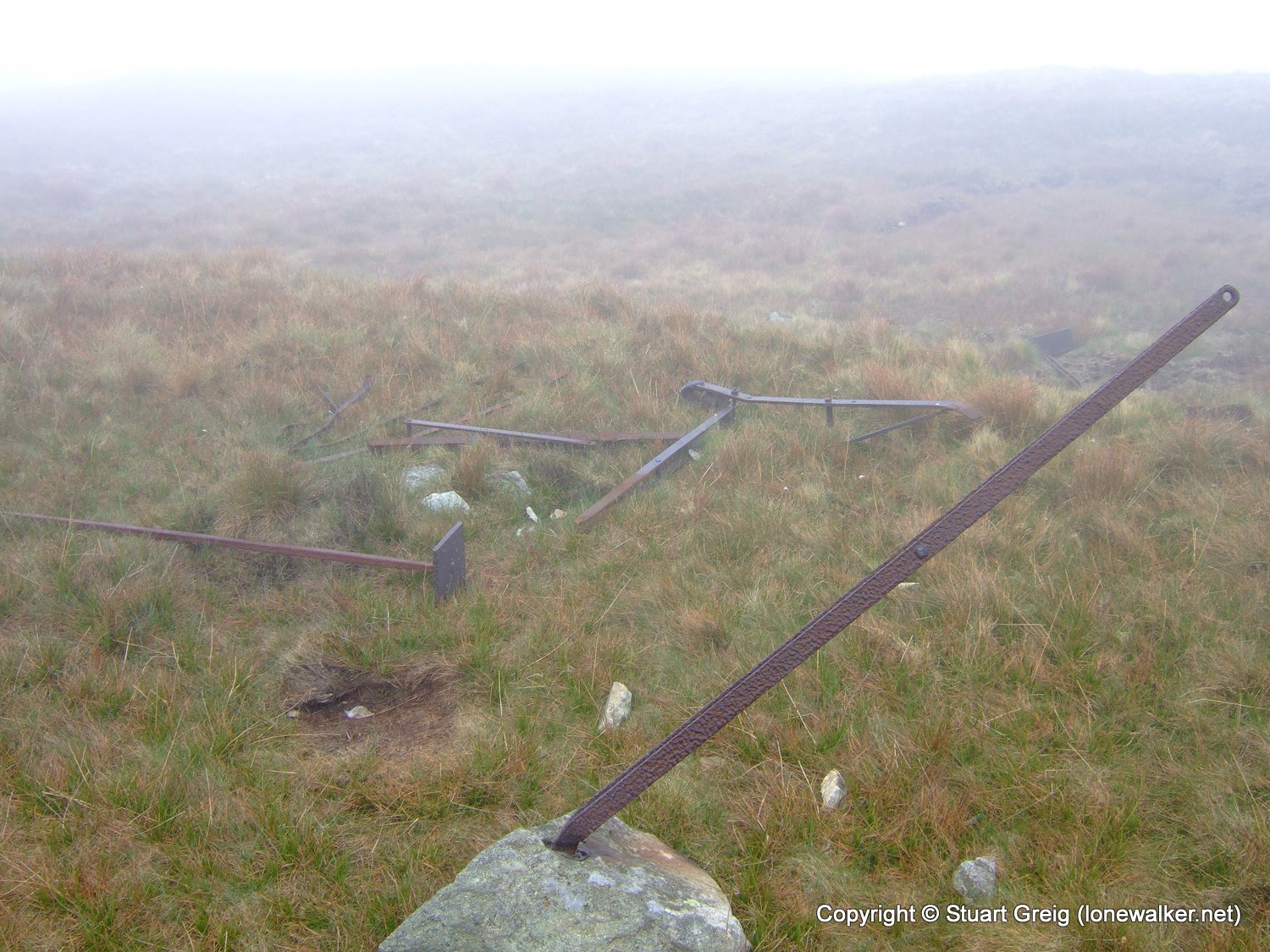 There was no reason to hang around on the summit, with no views, so I quickly pressed on to make the small ascent from Yoke and climb up to Ill Bell. I’m sure this is a majestic rocky summit with splendid views, but as I reached t
he top the mist and cloud were the worst they’d been and although there are three cairns on Ill Bell, I could barely see two at a time. 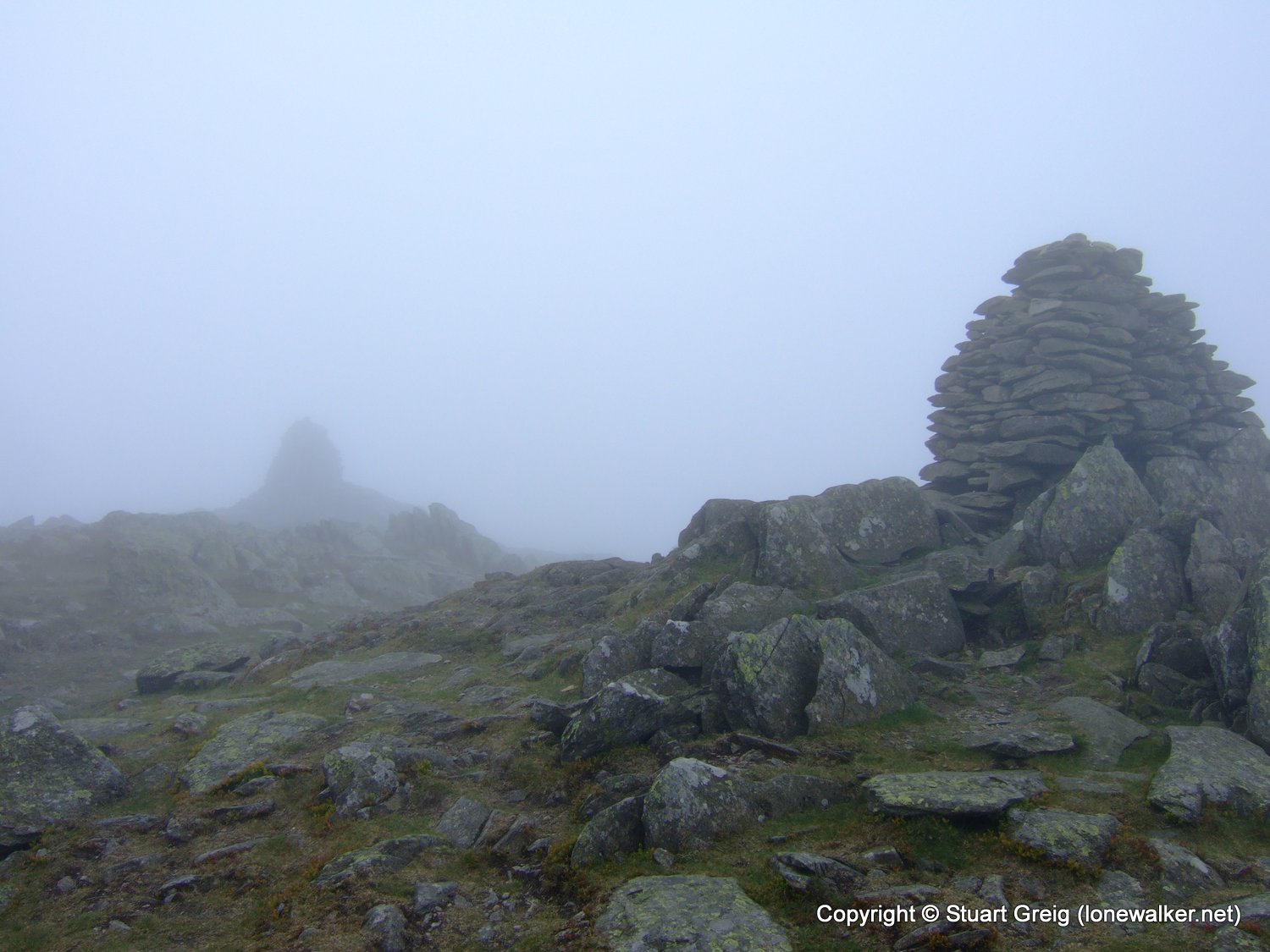 I stopped for a couple of minutes for a flapjack and a slug of Lucozade, but was soon continuing along the ridge to Froswick. No change here in terms of the views, apart from a few sheep, so I dropped off the ridge to pick up the course of the old Roman road, High Street. 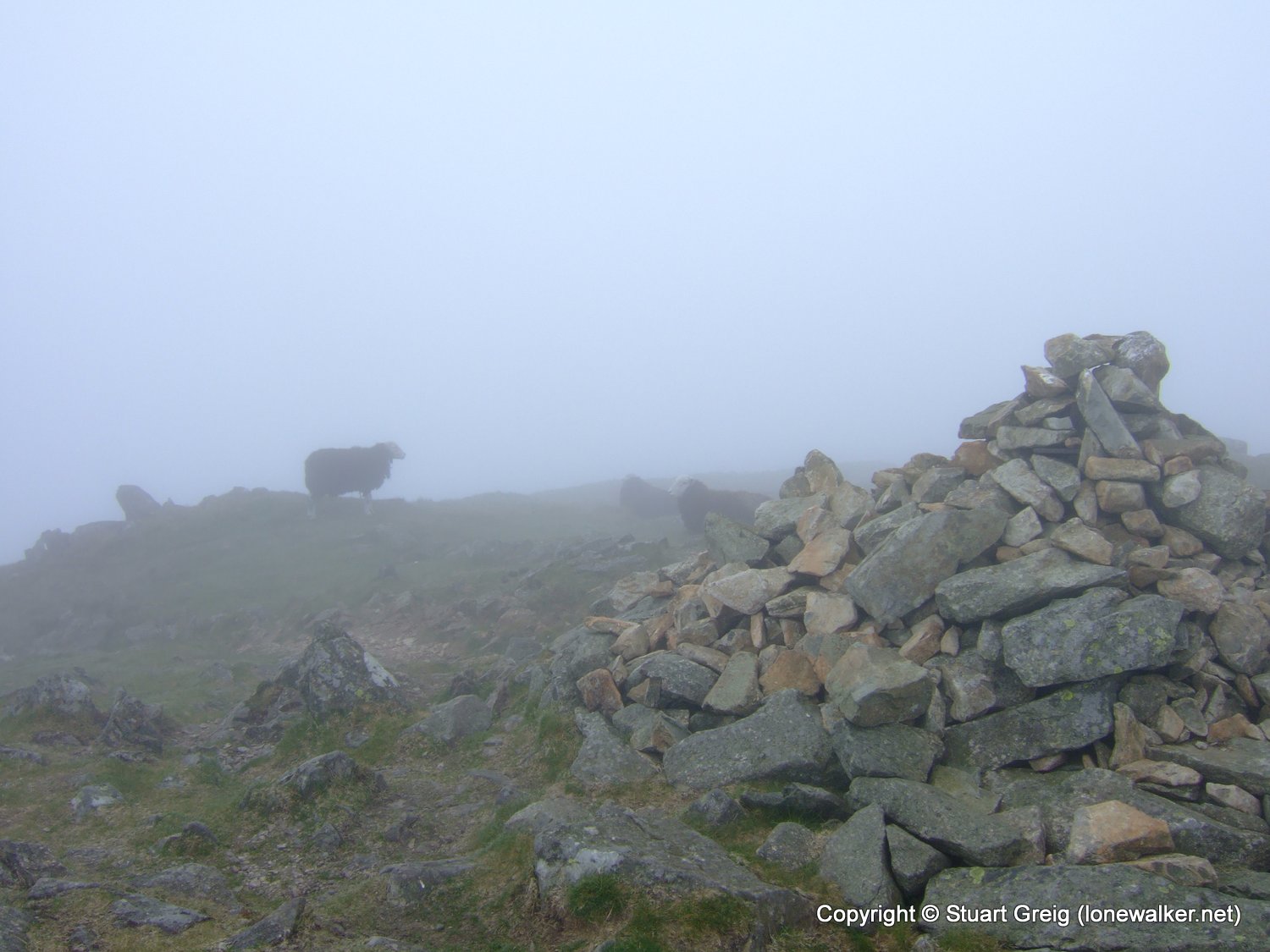 I had intended to walk along High Street to Thornthwaite Crag and its beacon, which had drawn me, moth-like to a flame, last week. I was getting a bit fed up of the mist and lack of views now though so cut down the hill to pick up the path leading down into Troutbeck Park. Once below the cloud, Troutbeck Tongue and the valley in which it sits opened up before me, the best view of the day. 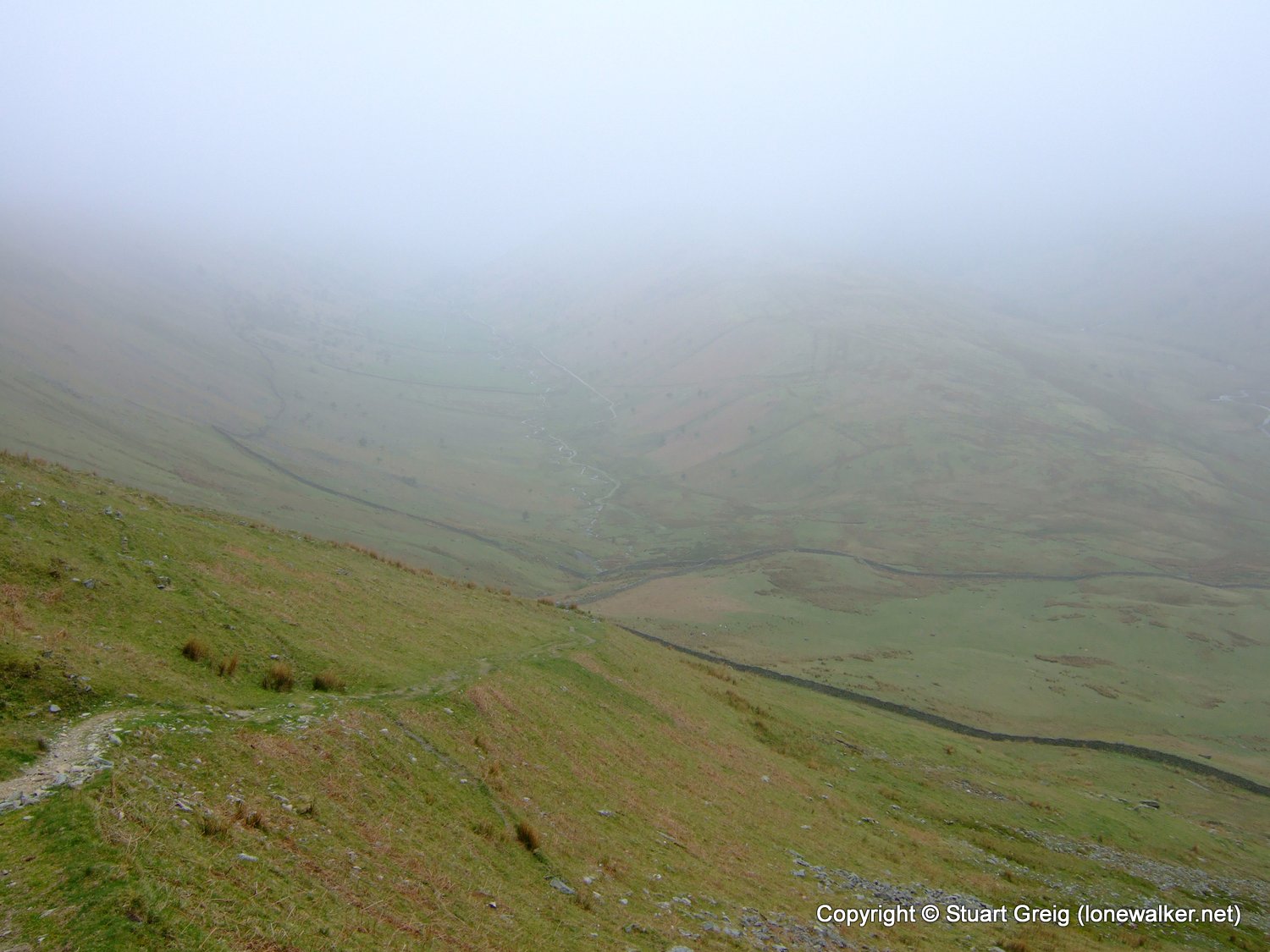 Troutbeck Tongue, hidden in the mist

I had already decided that I would have to do this walk again, to see the views from ridge still shrouded in cloud above me, so I shunned the walk along the Tongue to bag the Wainwright at the end and continued down the path towards Troutbeck. It was still fairly early, only about 10:30 and I finally started to meet other walkers and mountain bikers coming along the path from Troutbeck. 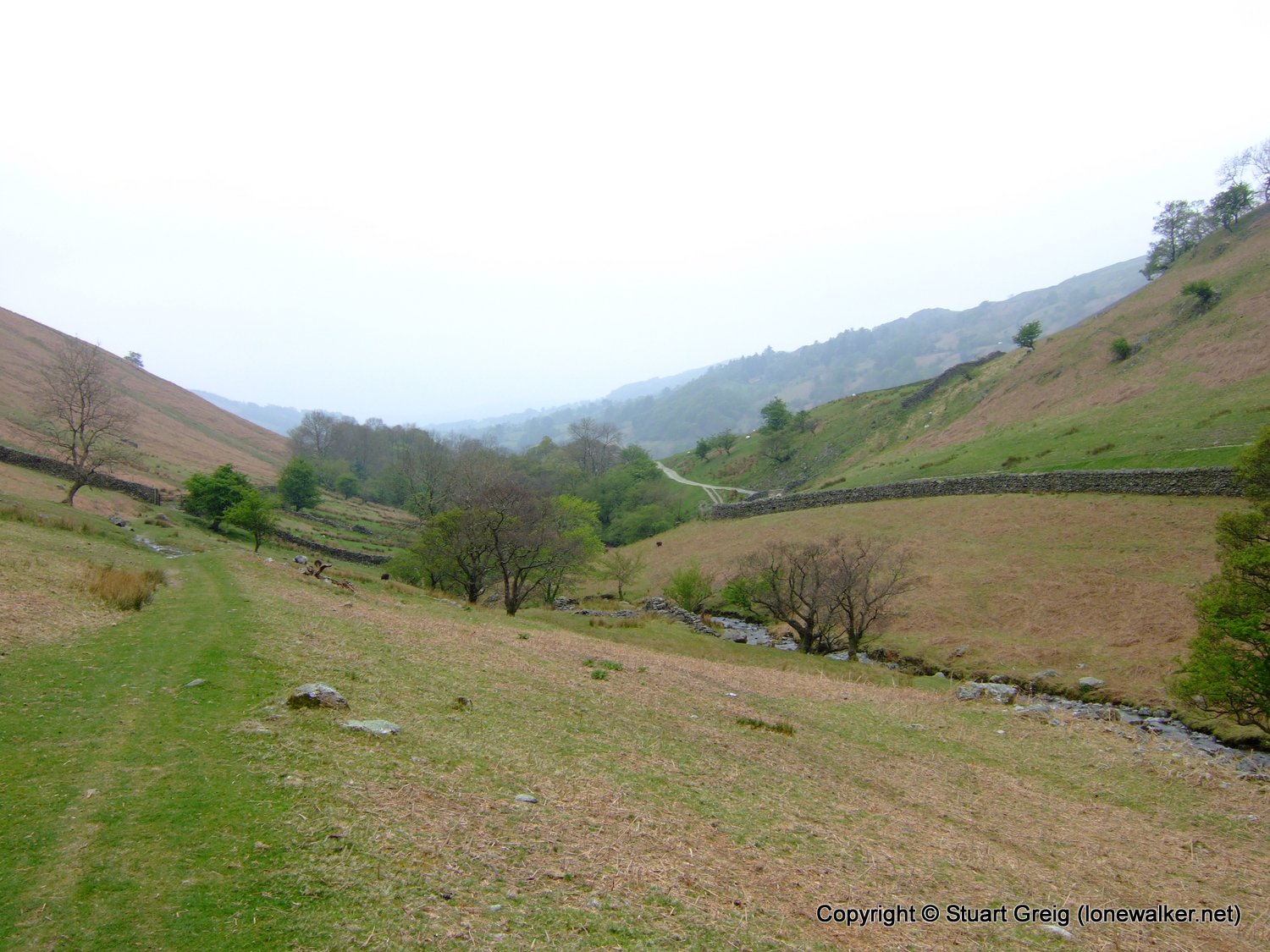 The path descends gradually to the caravan park and a short walk through this brought me to the main road where I had left the car. It had been a rather frustrating day, with little or no views the walk had simply been exercise, I could have achieved the same result on a treadmill. I’m definitely going to do the walk again, hopefully in clear weather. 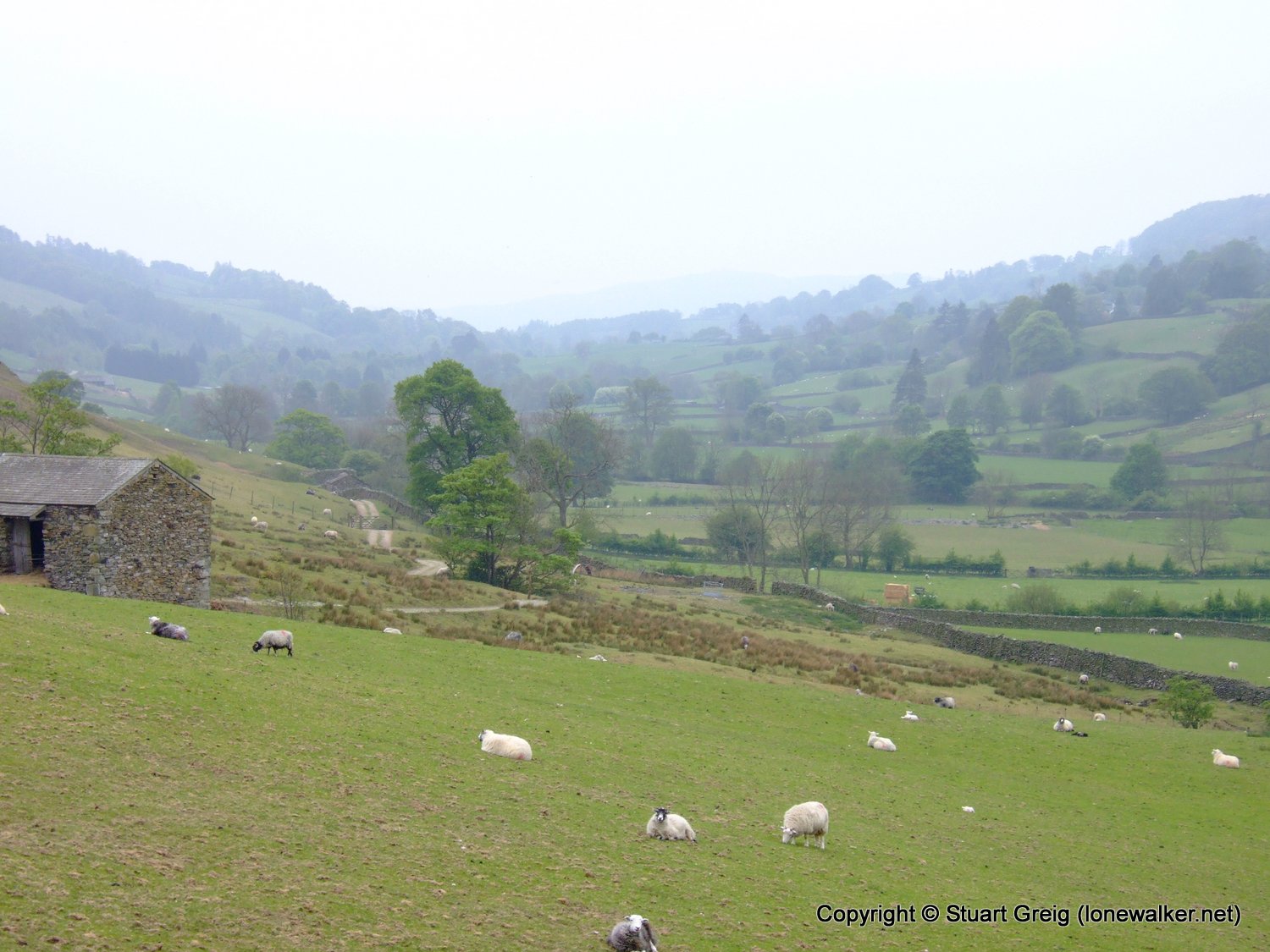 As a “footnote”, I’m still wearing the trail shoes and so far they’ve been fantastic. I just haven’t seen any downside to them, except the number of stones I manage to catch in them. Having said that I still haven’t worn them in bad weather, which is where I guess they will fare badly compared to traditional walking boots. I’m going to have to find some mid-height lightweight boots, which will hopefully give me the same feeling of freedom, but reduce the number of stones I get inside the boots.