Car parking for 10 cars max in Kentmere village, no toilets

The Far Eastern fells are so accessible that I returned to this well-trodden section of the Lakes for today’s walk. Although I have done all these summits previously, I hadn’t joined them all together to complete this classic Lakeland day walk. Not satisfied with the usual 7 Wainwright’s on the Kentmere Round, I modified it ever so slightly and included an extra 2 to make it the biggest Wainwright day I have done so far. In his ‘Fellwalking with Wainwright’ book, the author suggests avoiding the steep final ascent to Harter Fell from Nan Bield in favour of contouring across the face of the fell towards The Knowe. I included this short ascent and also added a minor detour to visit High Street – one of my favourite places in this part of the Lakes.

I risked the awkward and uncomfortable day you could spend walking with a stranger, by inviting Rambling Pete to join me on today’s walk. He lives quite close to me and on the way to the Lakes and I’ve enjoyed his recent walking journals so much I thought it worth taking the chance 🙂 There was no awkwardness though and it felt like we’d been walking together for ages. I can’t speak for Pete, but I enjoyed it thoroughly.

We left early, in order to ensure a parking spot in Kentmere village. I’ve not been there before, but I’d checked out the parking possibilities on Google Earth and they didn’t look very extensive. I always prefer an early start anyway. As it was we got one of the 8-10 possible parking places opposite the ugly looking church; the only place where parking isn’t prohibited by many official and unofficial ‘No Parking’ signs around the village.

Kentmere is a lovely, wide, green valley and the buildings in the village are all stone built and lovely. All except the church that is. It’s an astonishingly ugly building, rendered in some dreadful plaster by what must have been a trainee or apprentice plasterer. Not a good example of rural ecclesiastical architecture. 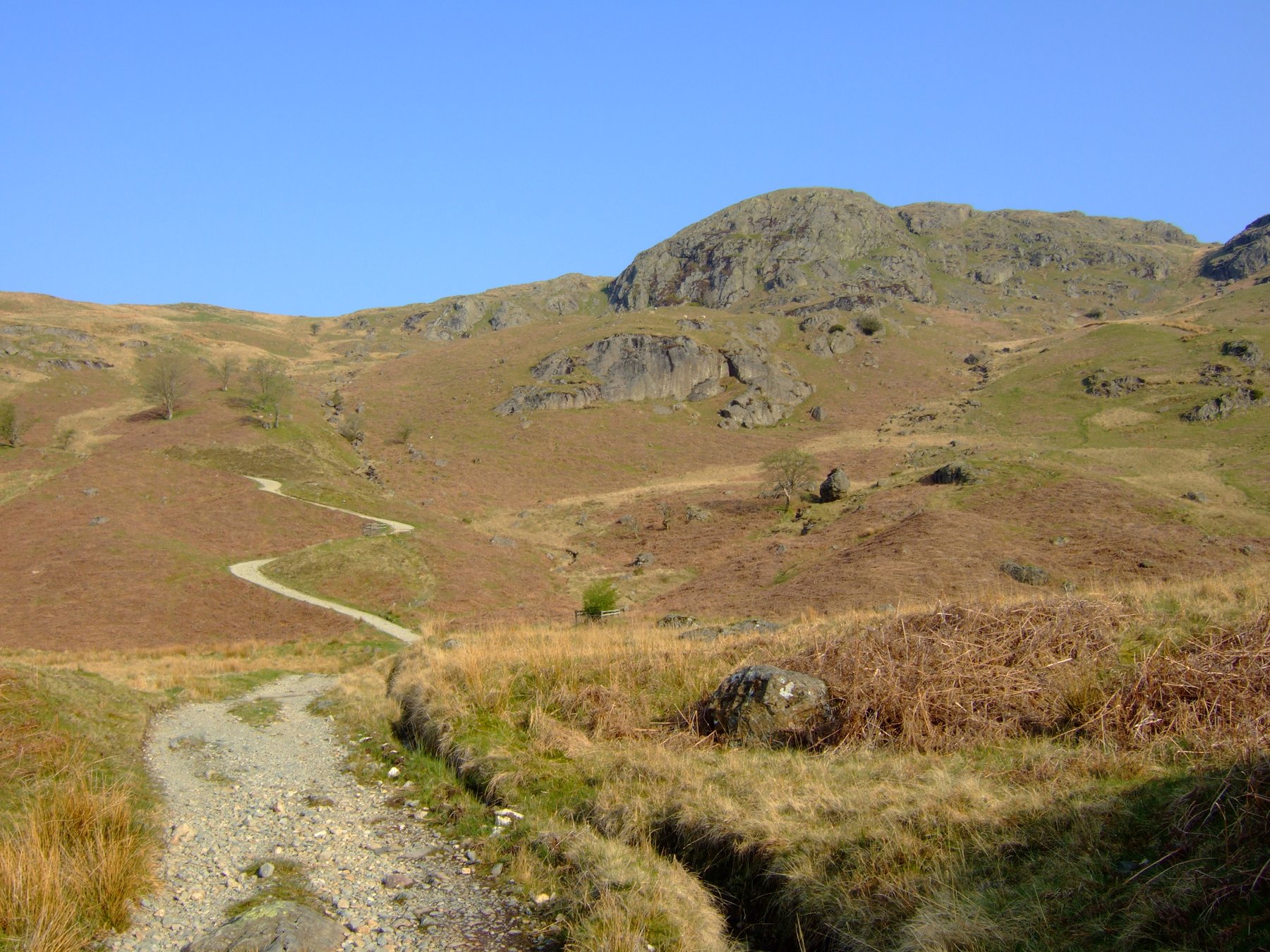 The day was gloriously warm and for the first time this year I managed to walk with shorts (or rather 3/4 lengths) and shirt without a fleece. I carried both a sun hat and woolly hat and gloves – such is the unpredictability of the English weather. The distant views (anything over a mile or so) were hampered by a brownish haze, so we weren’t going to get any beautiful panoramic shots today. 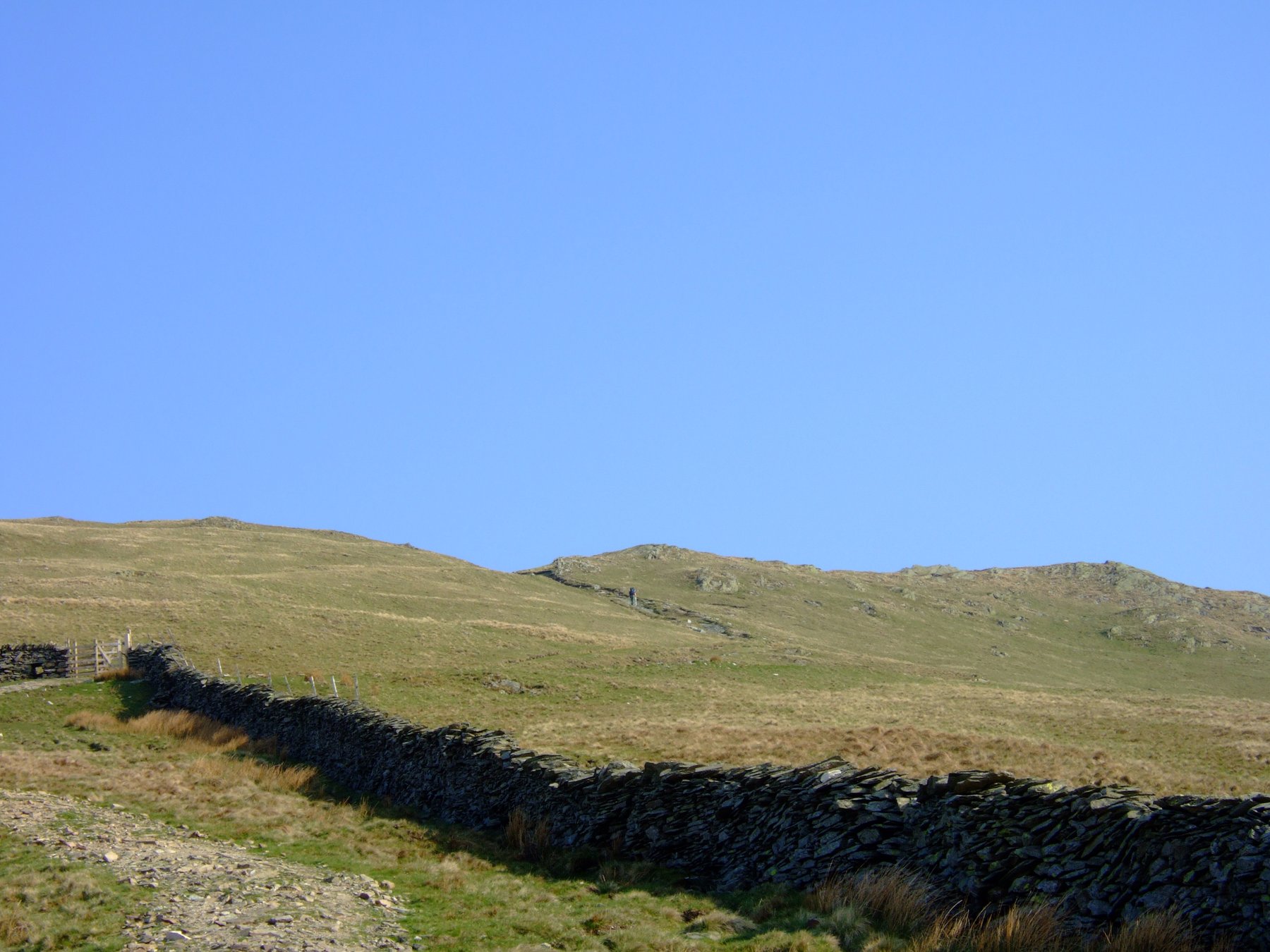 Approaching Yoke with slow solo walker ahead, carrying a huge pack by the looks of it.

I was rather surprised to find anyone on the track ahead of us, as we’d set out so early from Kentmere. Even from a distance we could see that this walker was carrying a large pack and I guessed they’d wild camped somewhere nearby and had made an early start to the day. 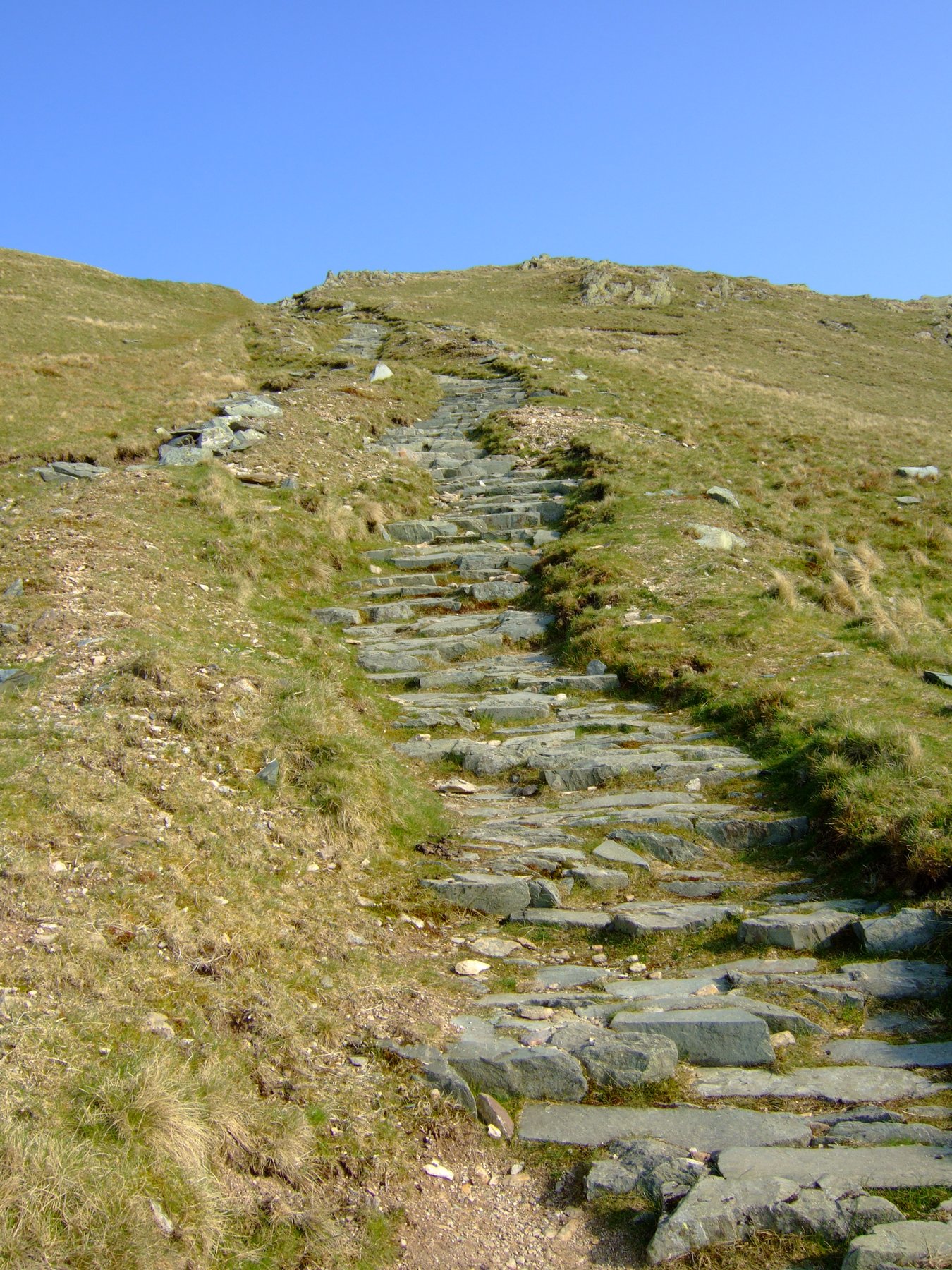 The stone steps on the approach to Yoke

I’d forgotten the false summit these steps offer as you approach Yoke, once you crest the rise, there’s still about 1/4 of a mile of gentle incline ahead of you. 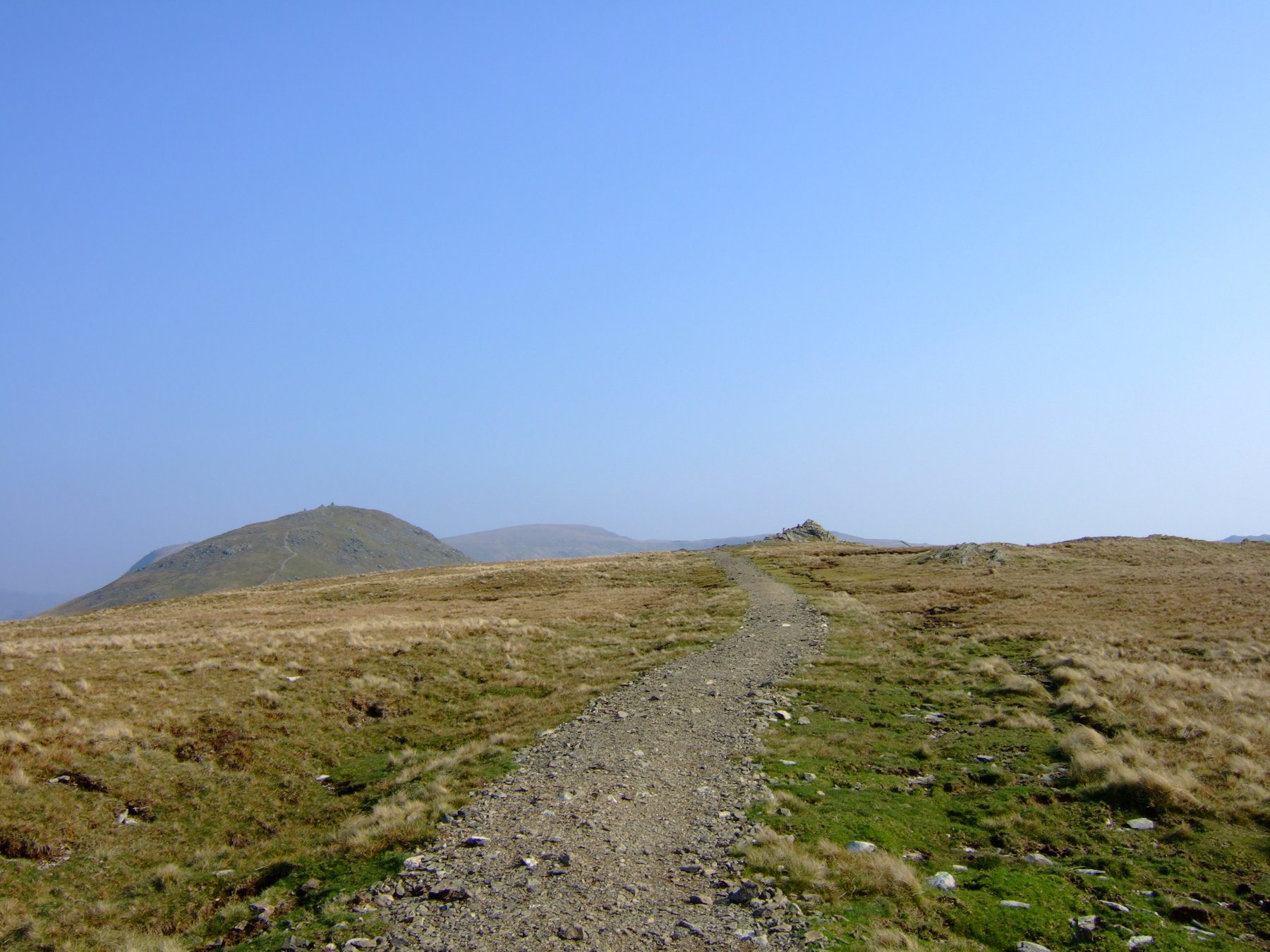 The summit of Yoke, looking towards Ill Bell on the ridge ahead

We met up with the walker ahead of us as she rested on the summit cairn on Yoke. She was an older lady who must have almost been outweighed by her huge pack. She met us warmly and asked if we would take her photo. She said she wanted to send it to one of the sherpa’s who had walked with her when she was in Nepal recently. I couldn’t help but think that the Lakes (as splendid as they are) must have seemed something of an anti-climax after Annapurna and Everest Base Camp. 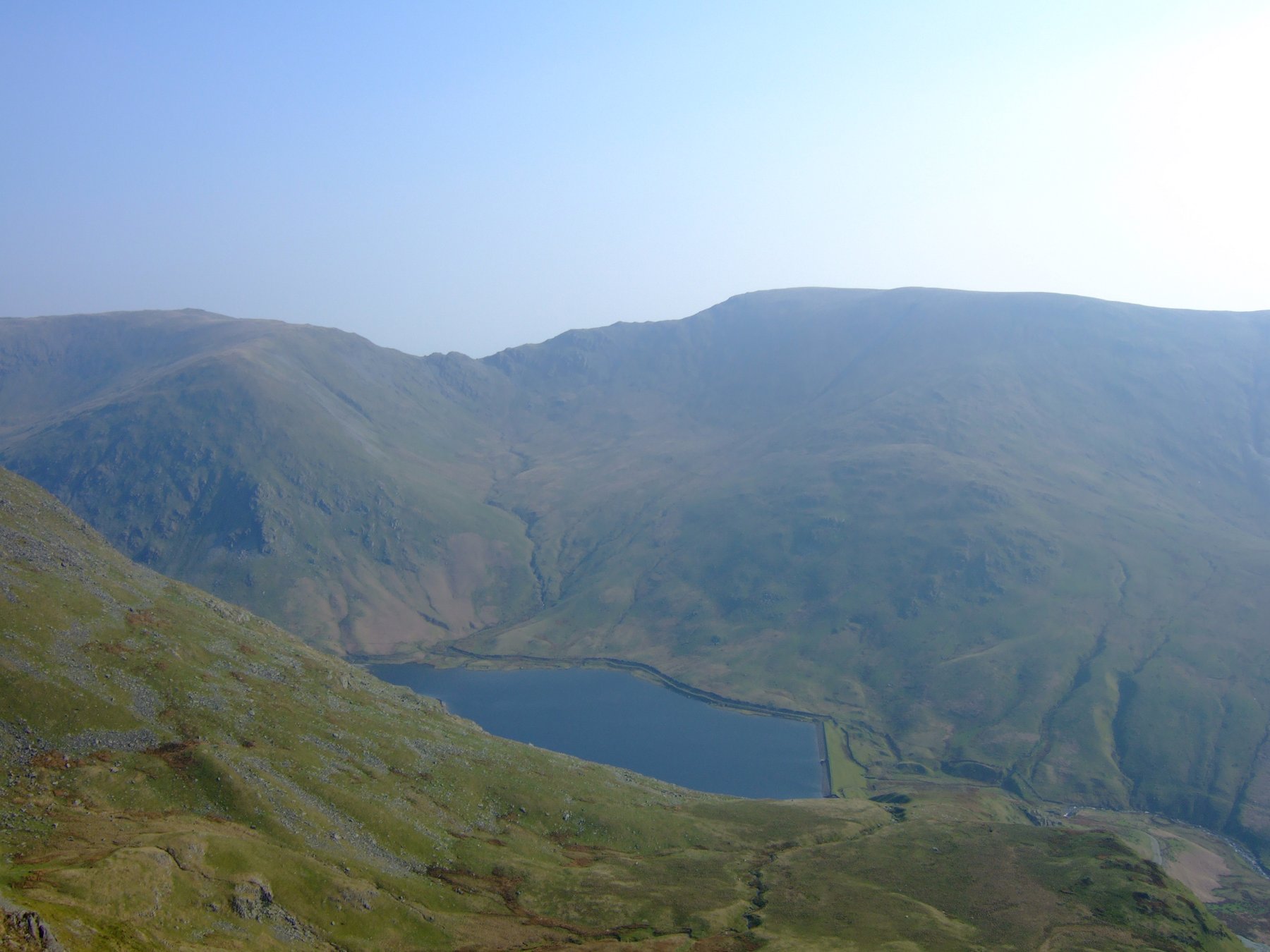 The haze hung in the air all day and made views like this a little disappointing, but at least the sun was shining and we weren’t getting wet. 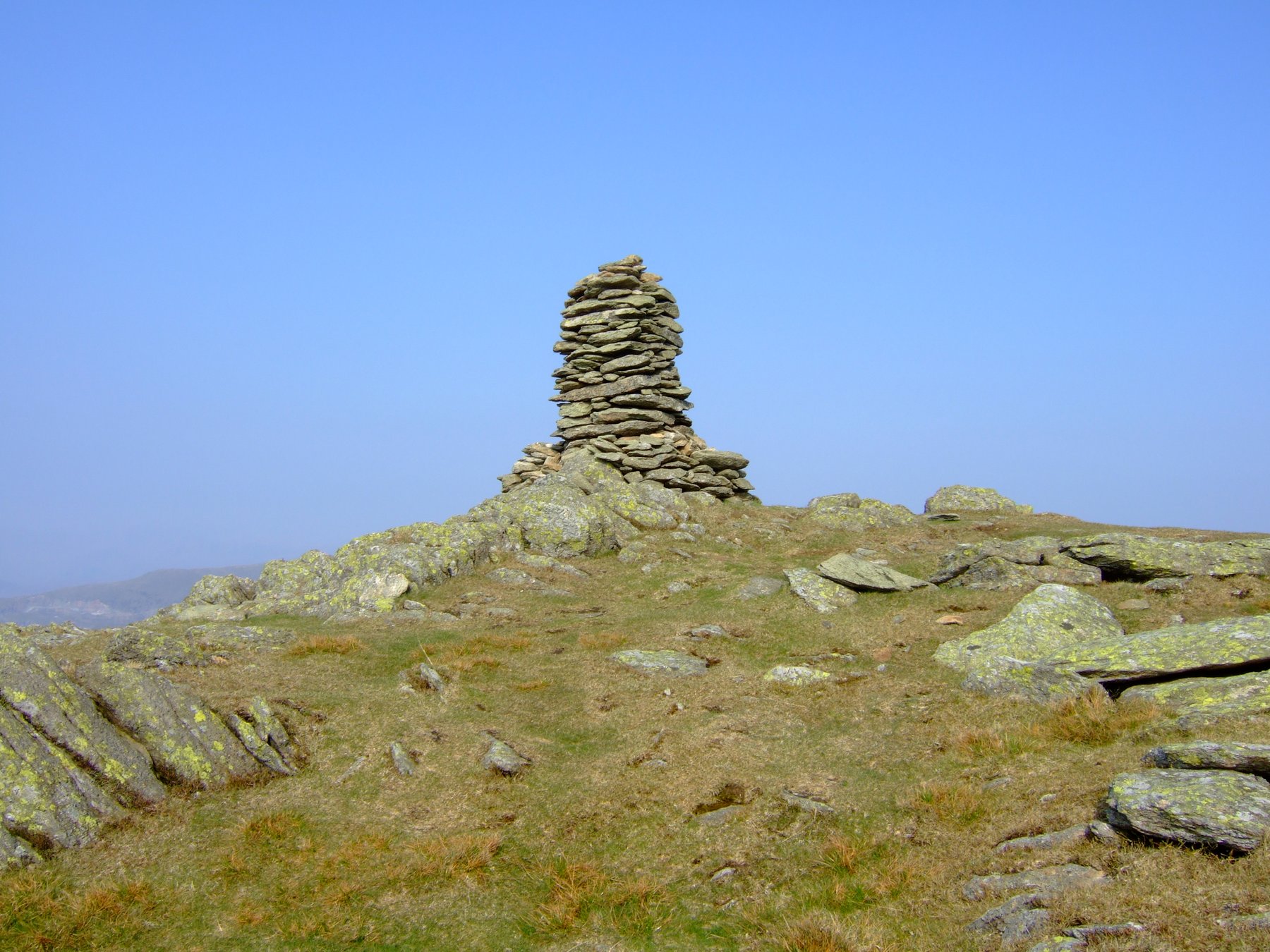 The southern most cairn on Ill Bell 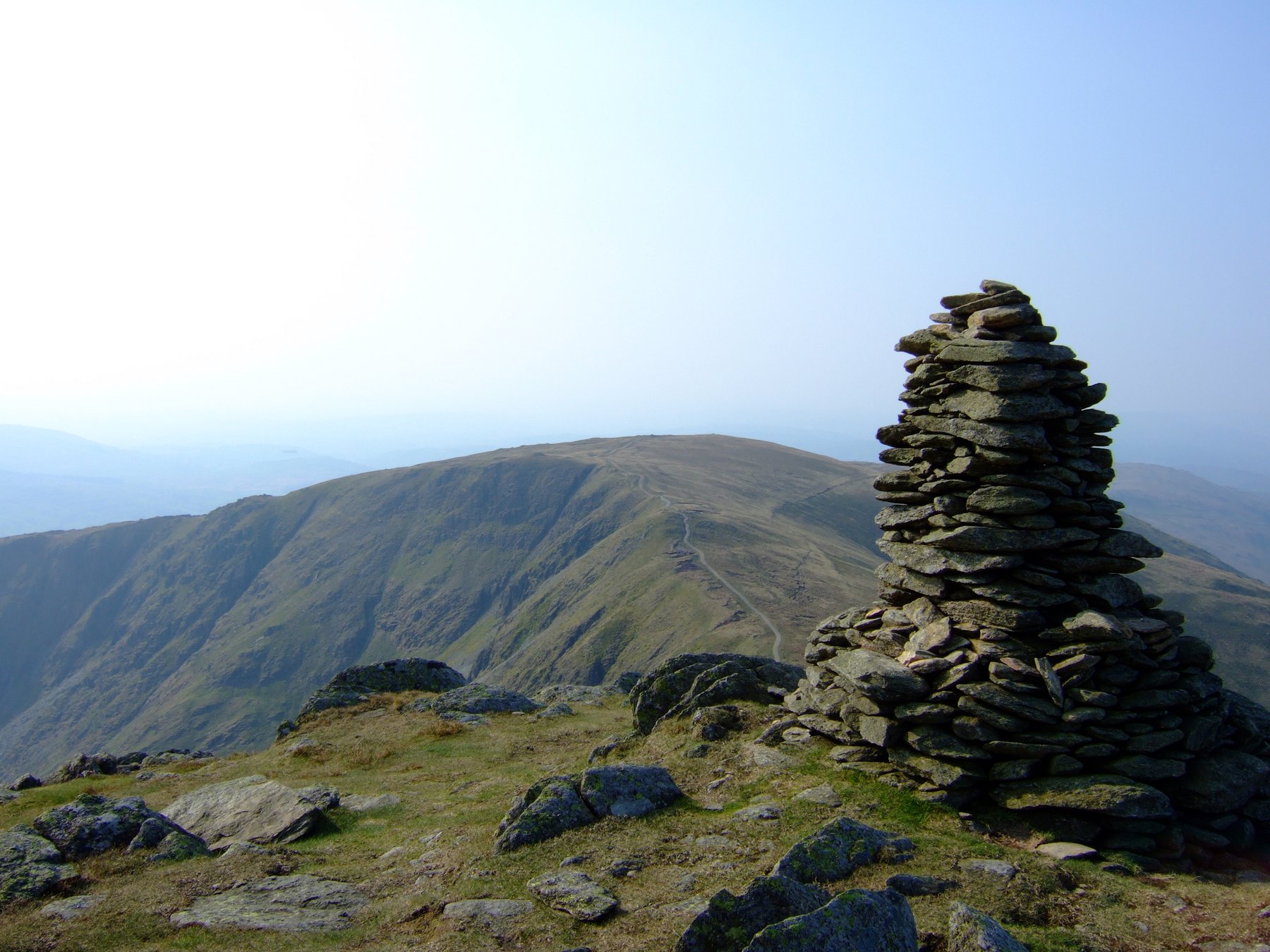 Cairn on Ill Bell, looking back to Yoke 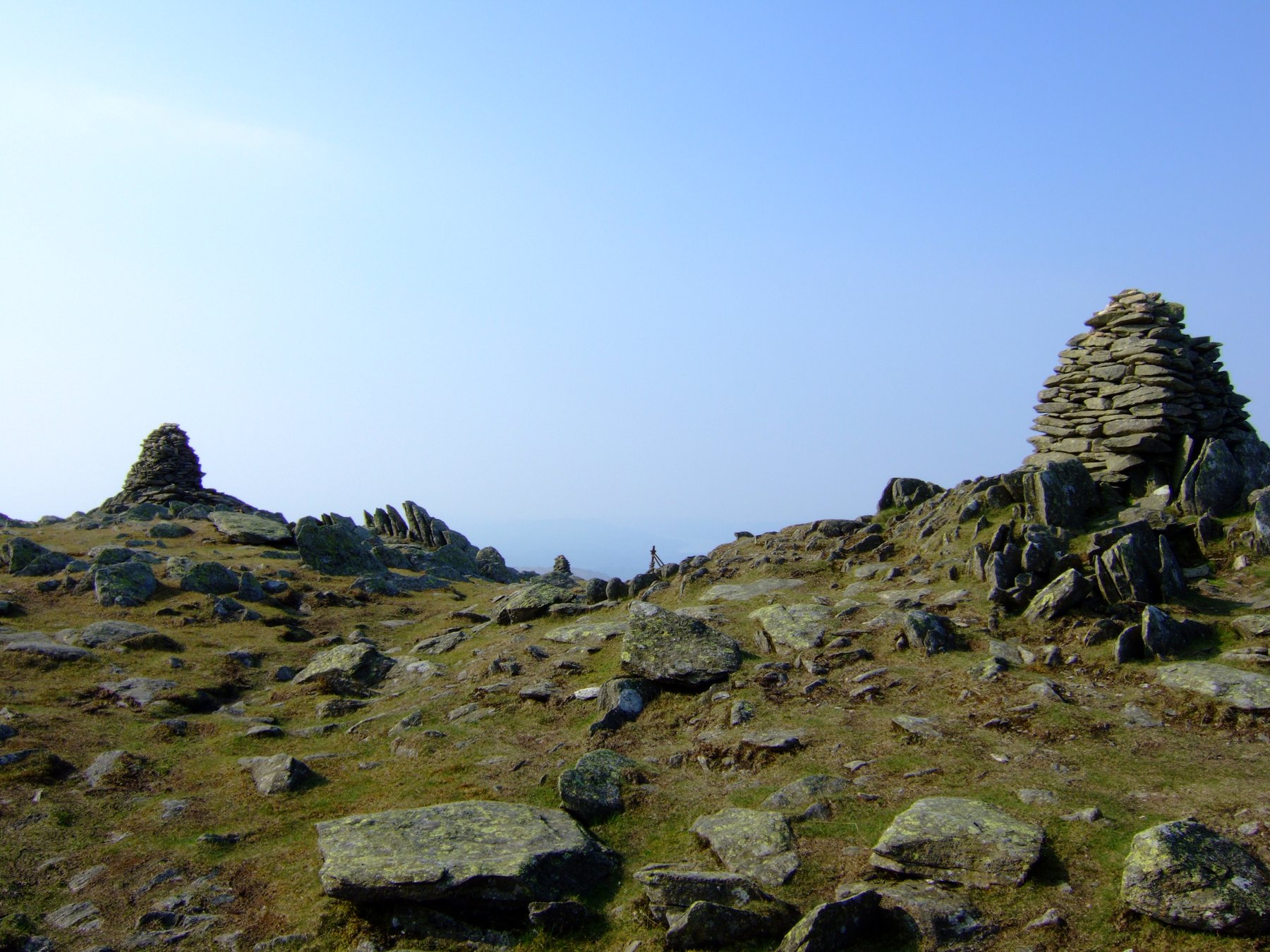 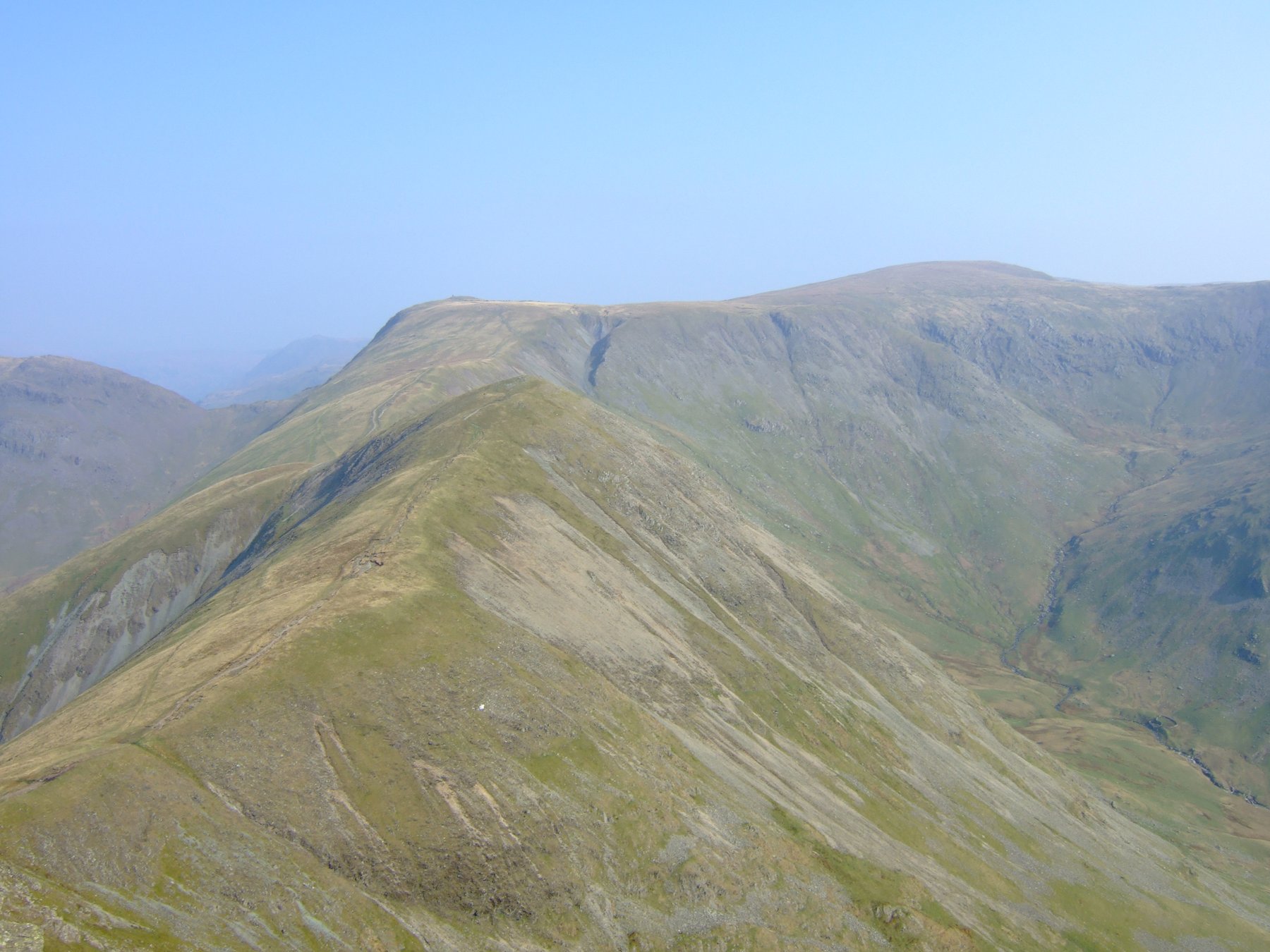 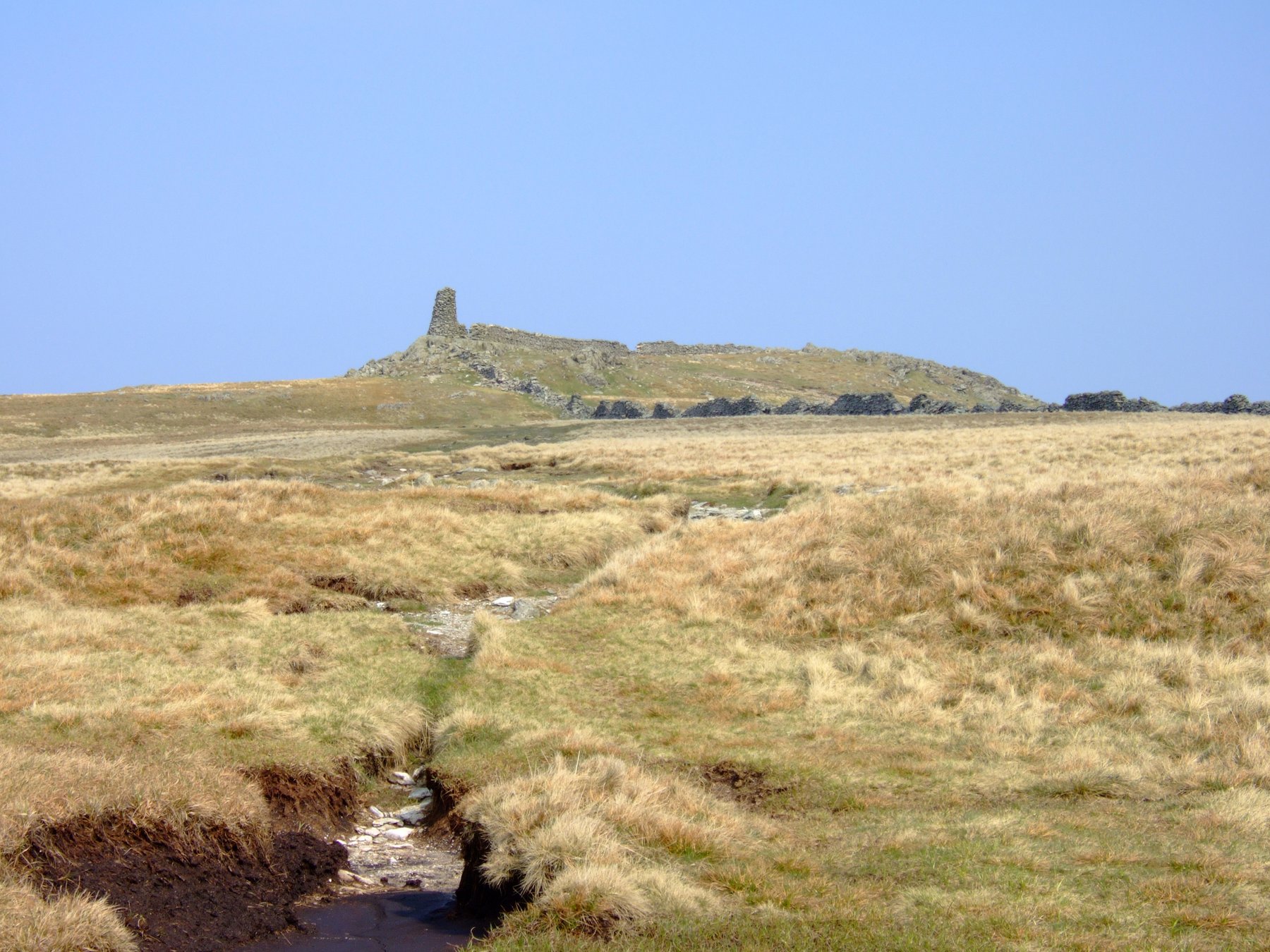 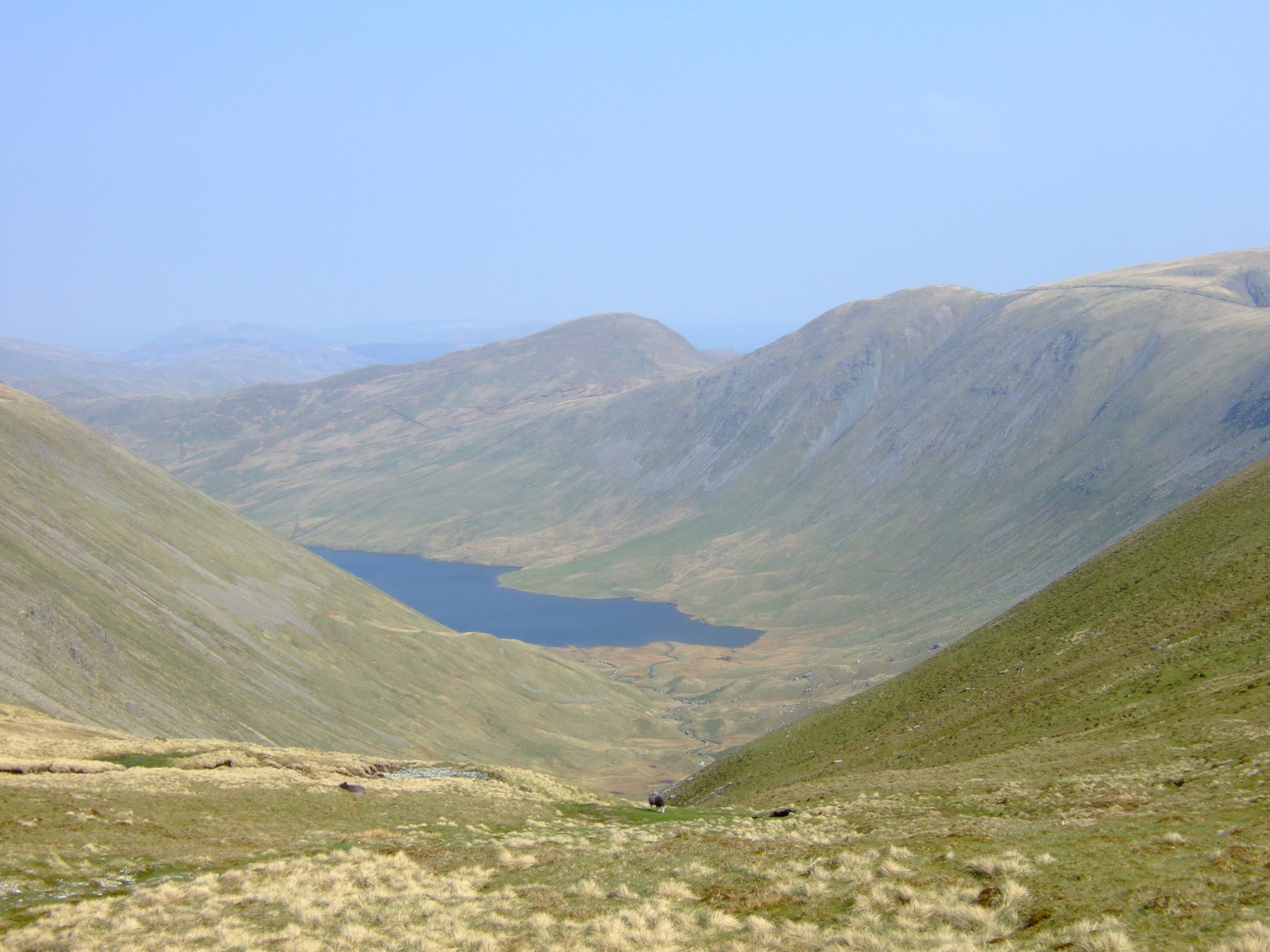 Hayeswater with Rest Dodd behind

There is a direct path from the beacon to Mardale Ill Bell and Wainwright’s walk description of this route will take you along that path, but I wanted to make the short detour to High Street, even though I’d been there only a couple of days earlier, on my last walk. The detour adds a couple of hundred feet of ascent and about 1/2 a mile or so, and its well worth the effort.

It’s a wonderfully barren spot, especially so when the wind is blowing and the rain is coming down. Today it was warm and calm, with just a slight breeze to cool us. The trig point of course is something of a magnet for me. Surprisingly, for a Lakeland trig, its not stone built, but concrete and if there’s anything that is in good supply on the top of High Street then its stones.

We met a guy approaching the summit at the same time as us – remember its sunburn weather and we’re in shorts – he was in full length trousers with bright red knee gaiters and sunhat. He was also in the process of donning his waterproof as we departed! I wonder what he walks in when its cold and wet? 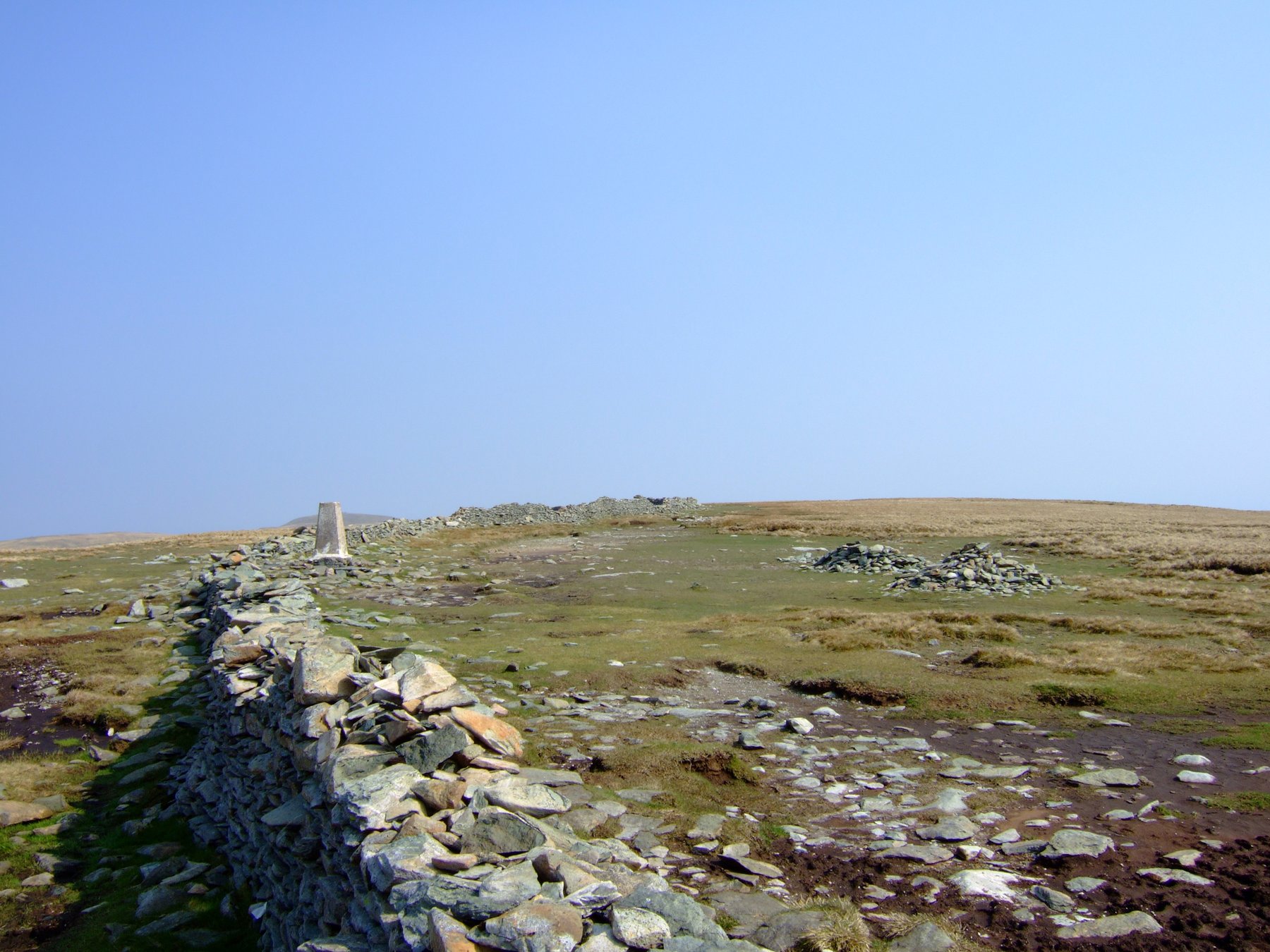 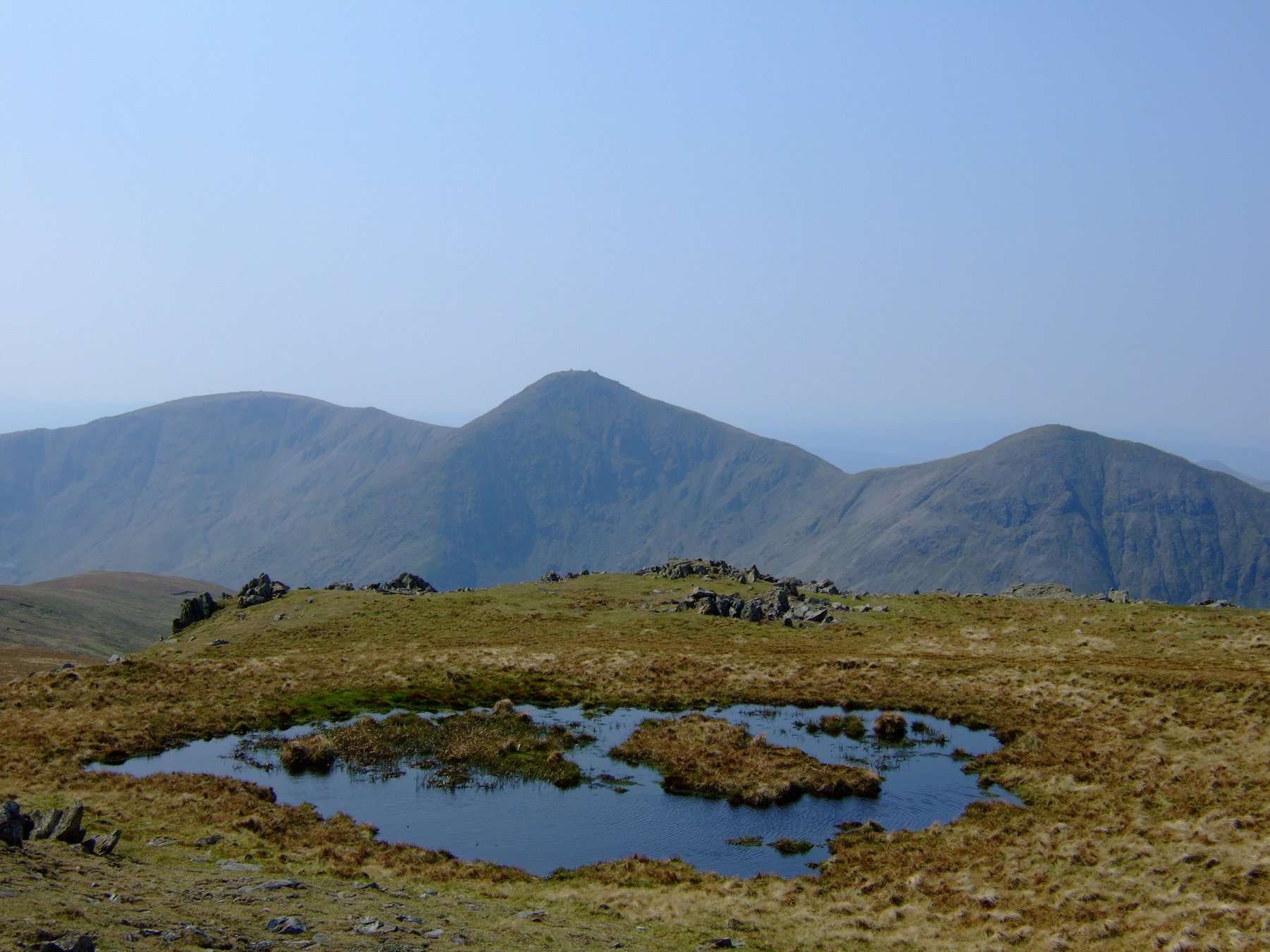 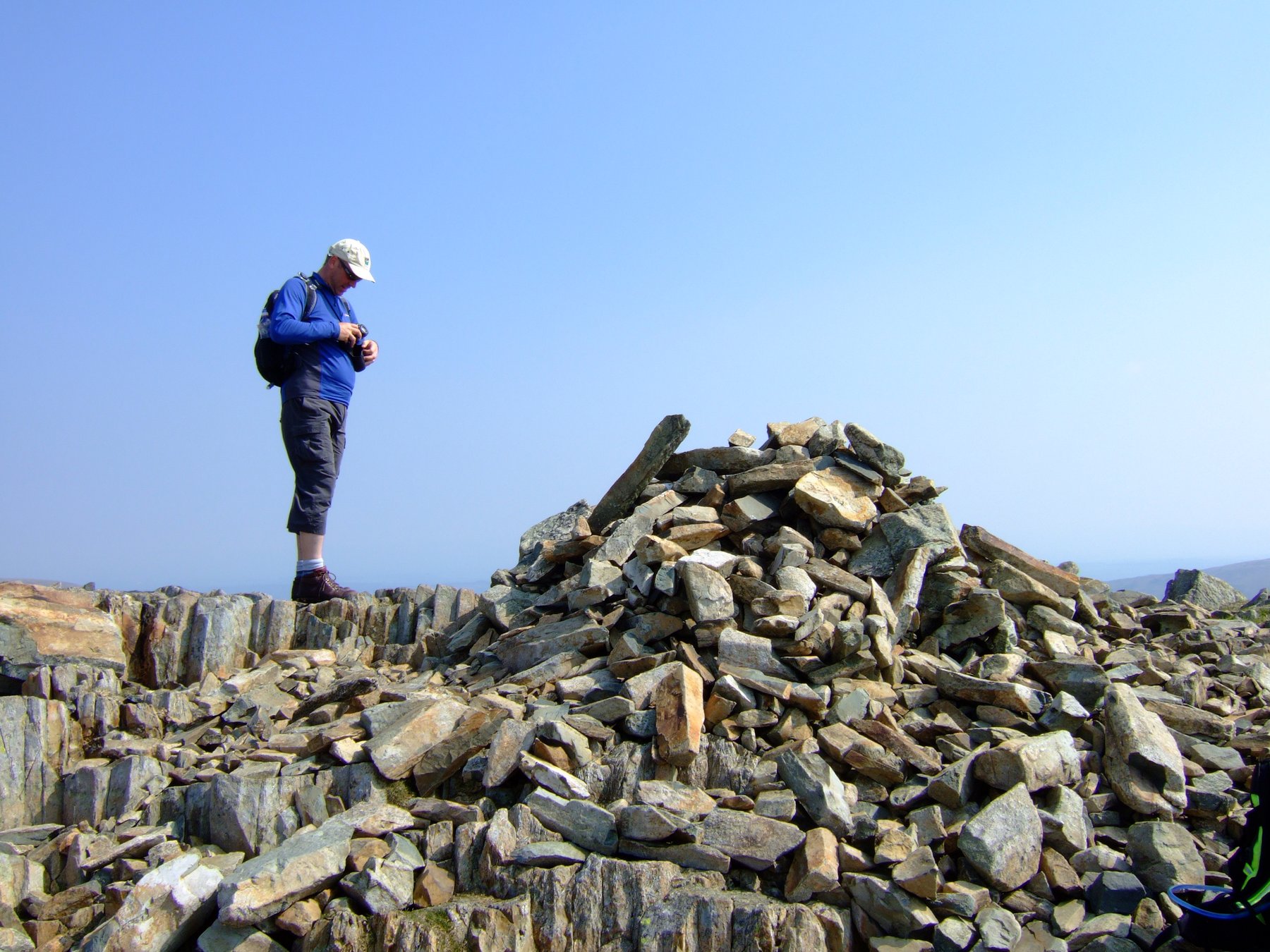 Pete on the summit of Mardale Ill Bell 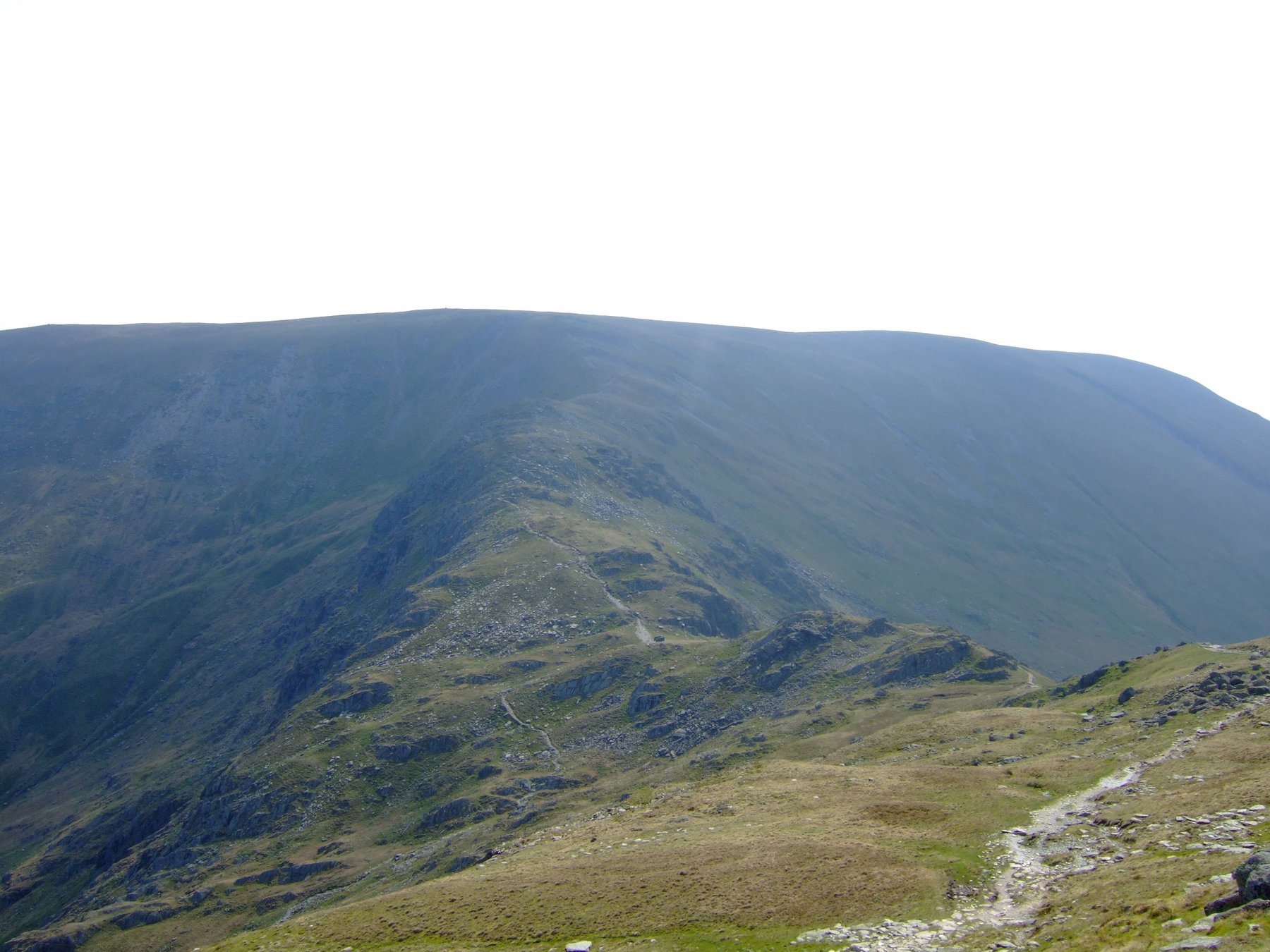 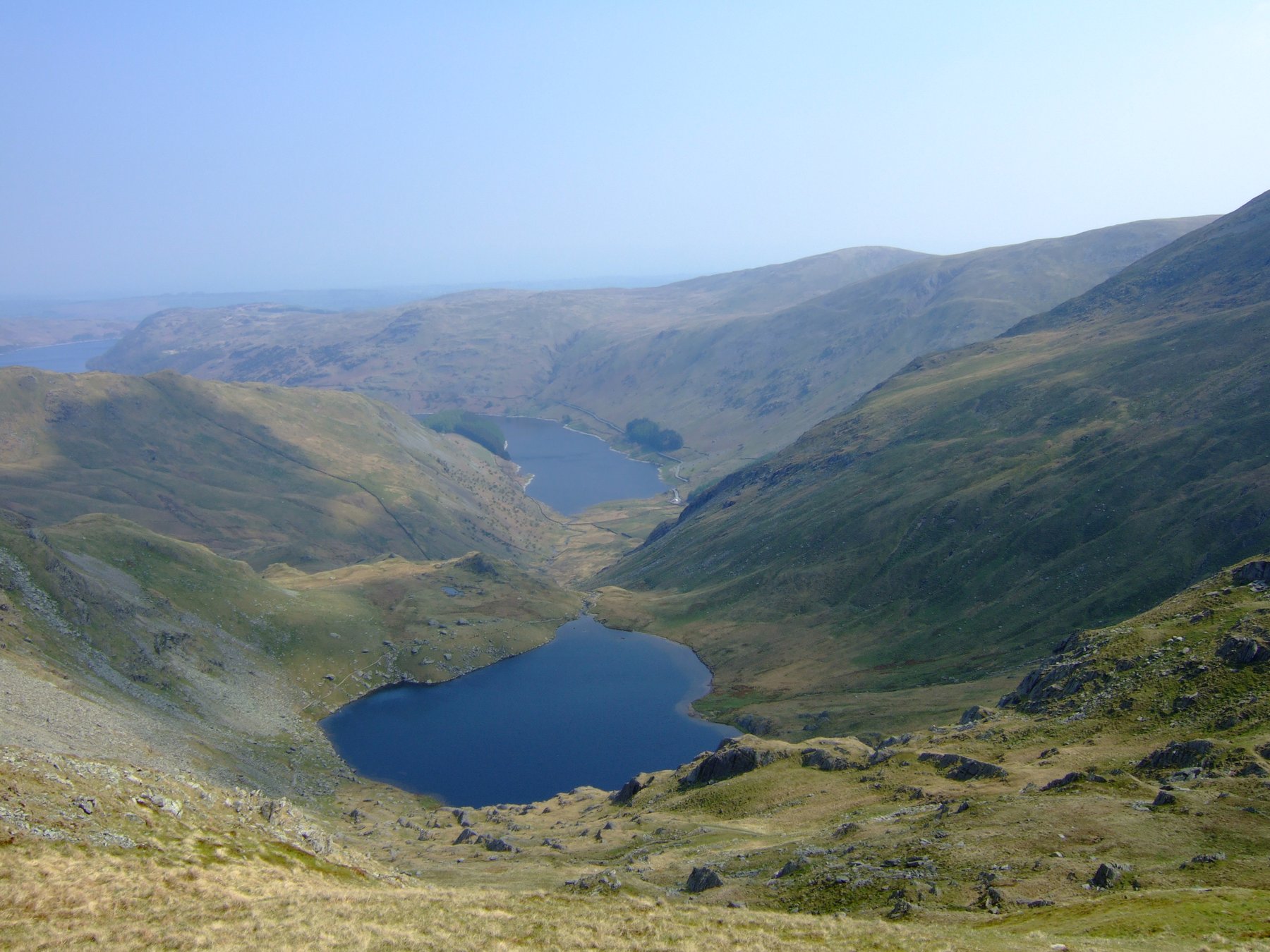 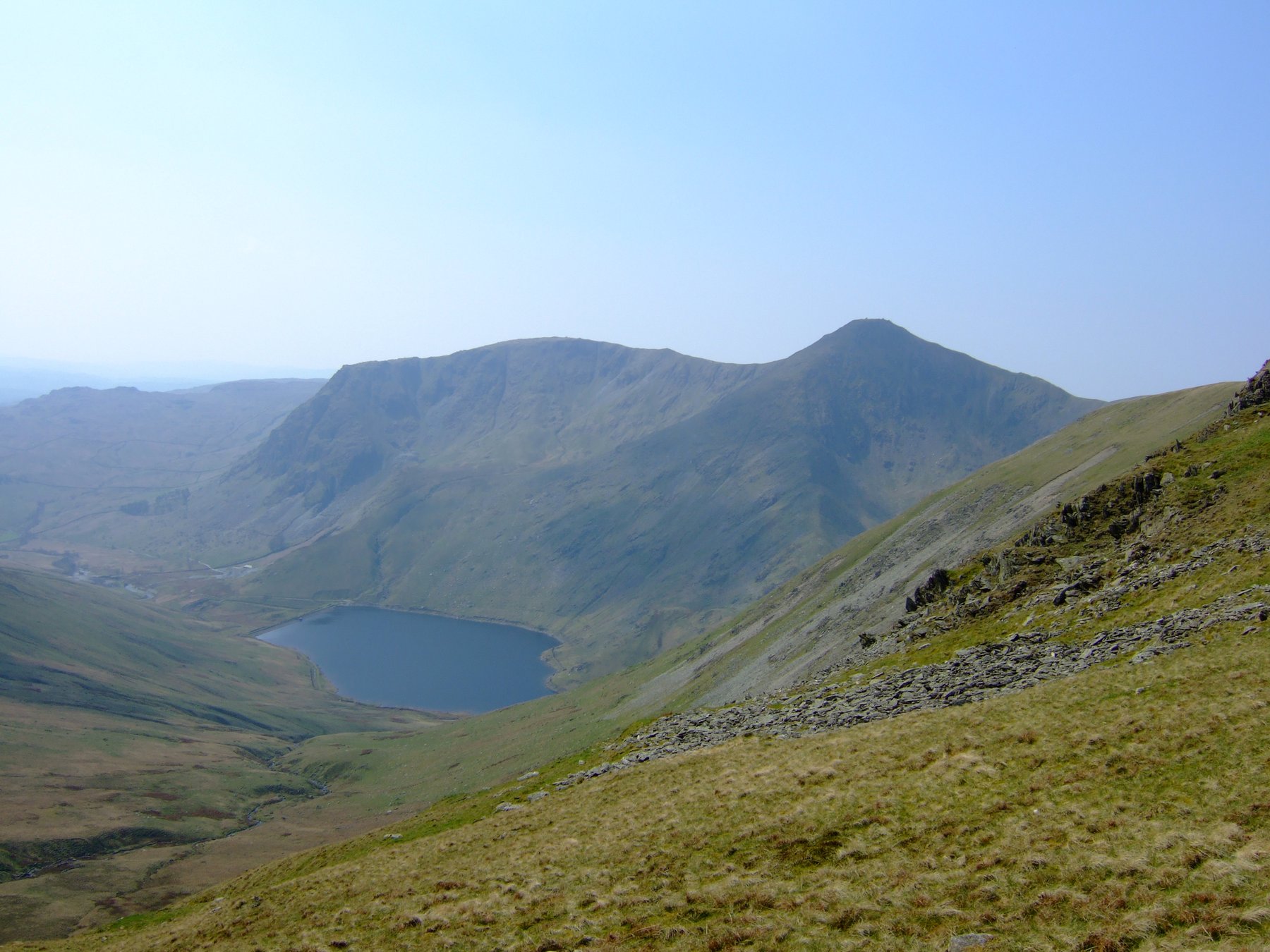 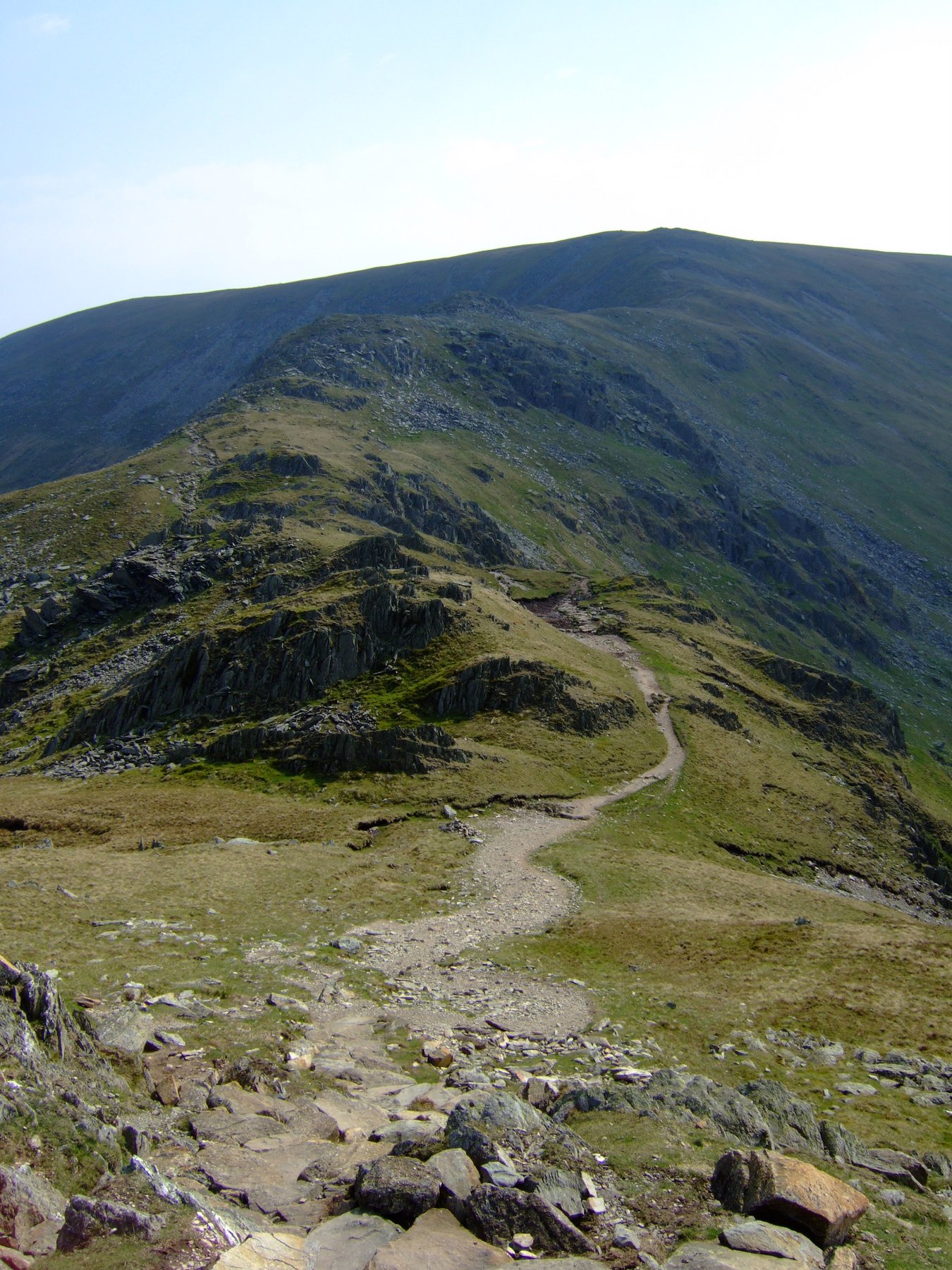 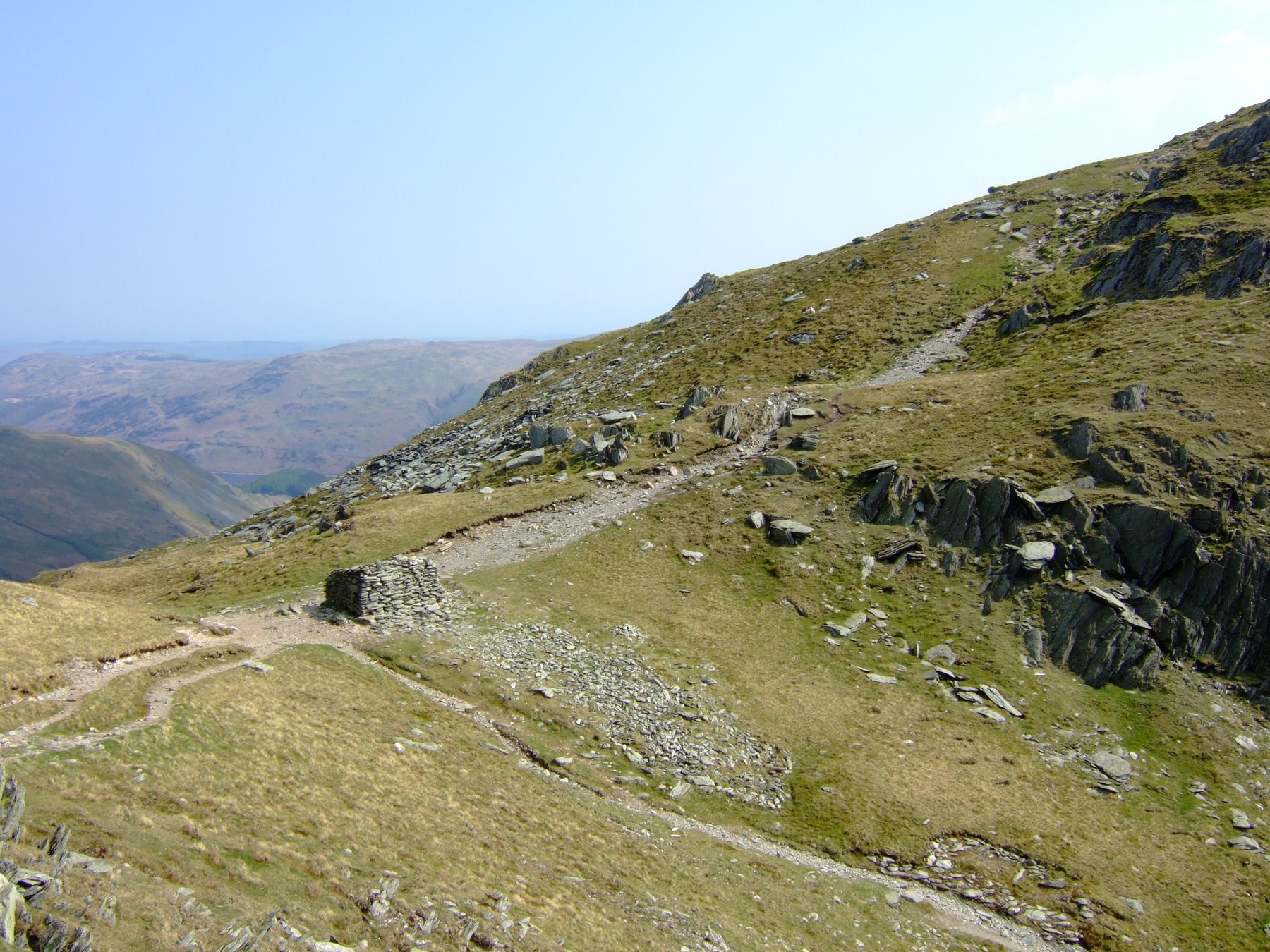 The shelter on Nan Bield Pass 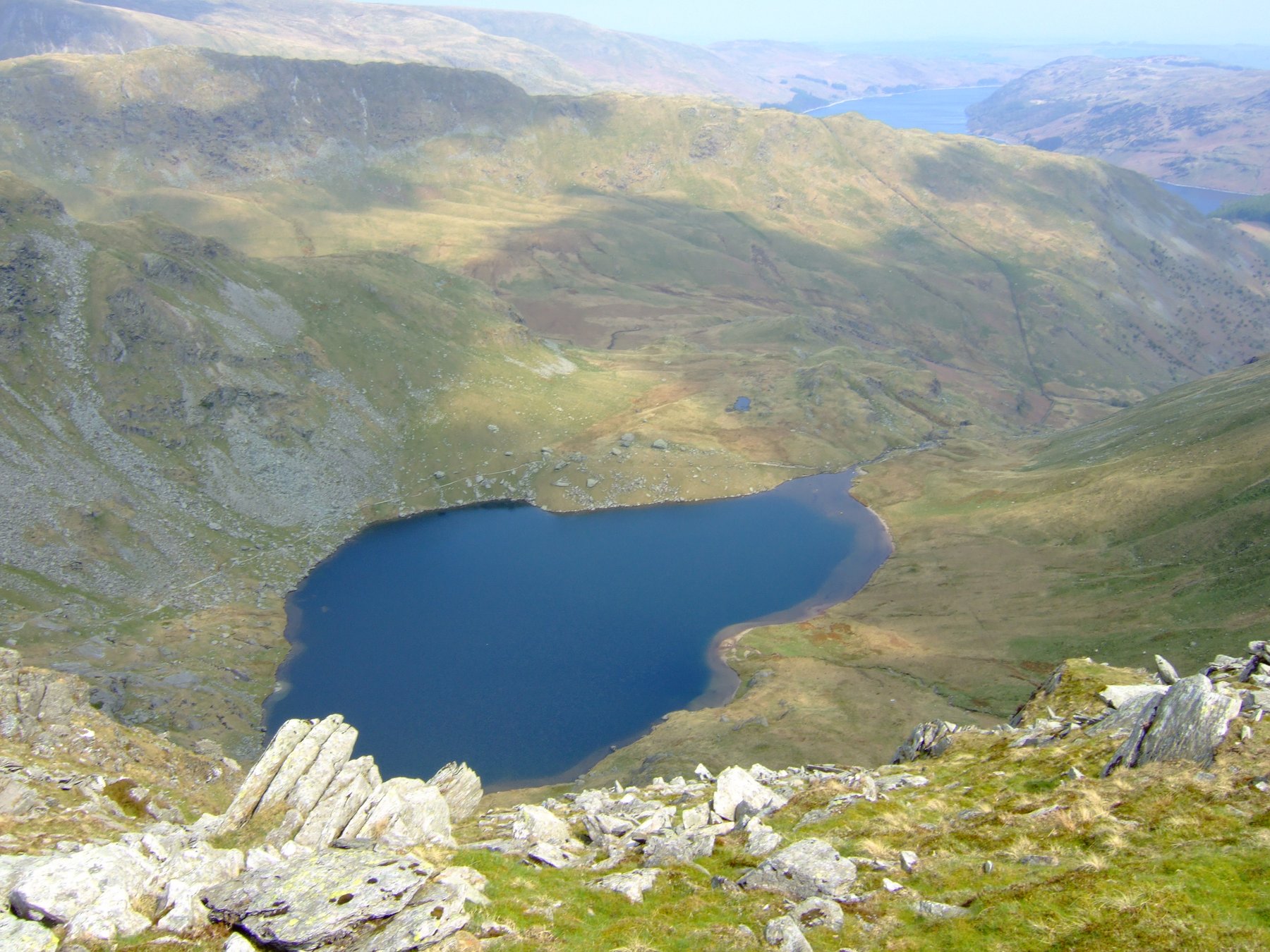 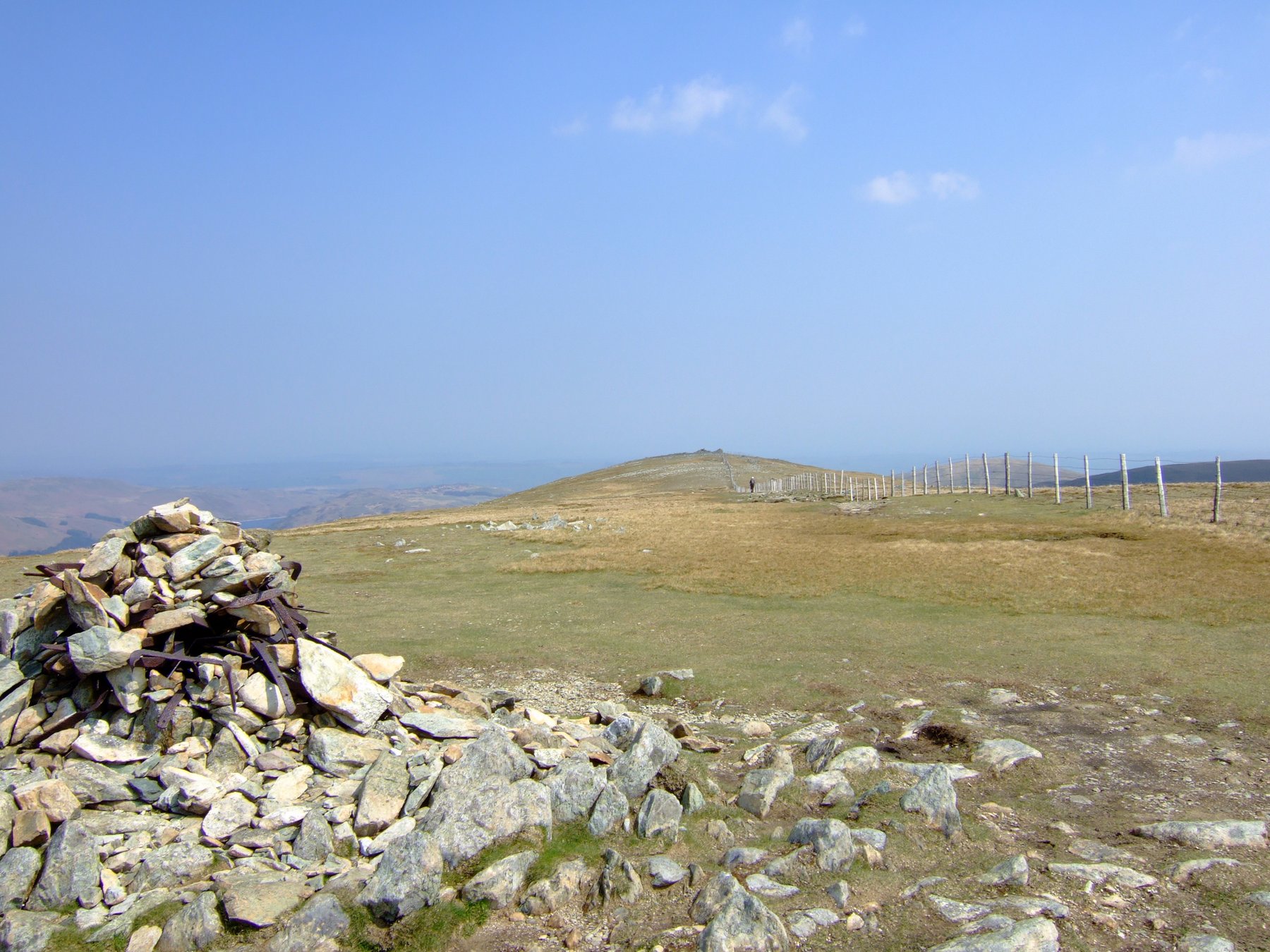 The summit of Harter Fell 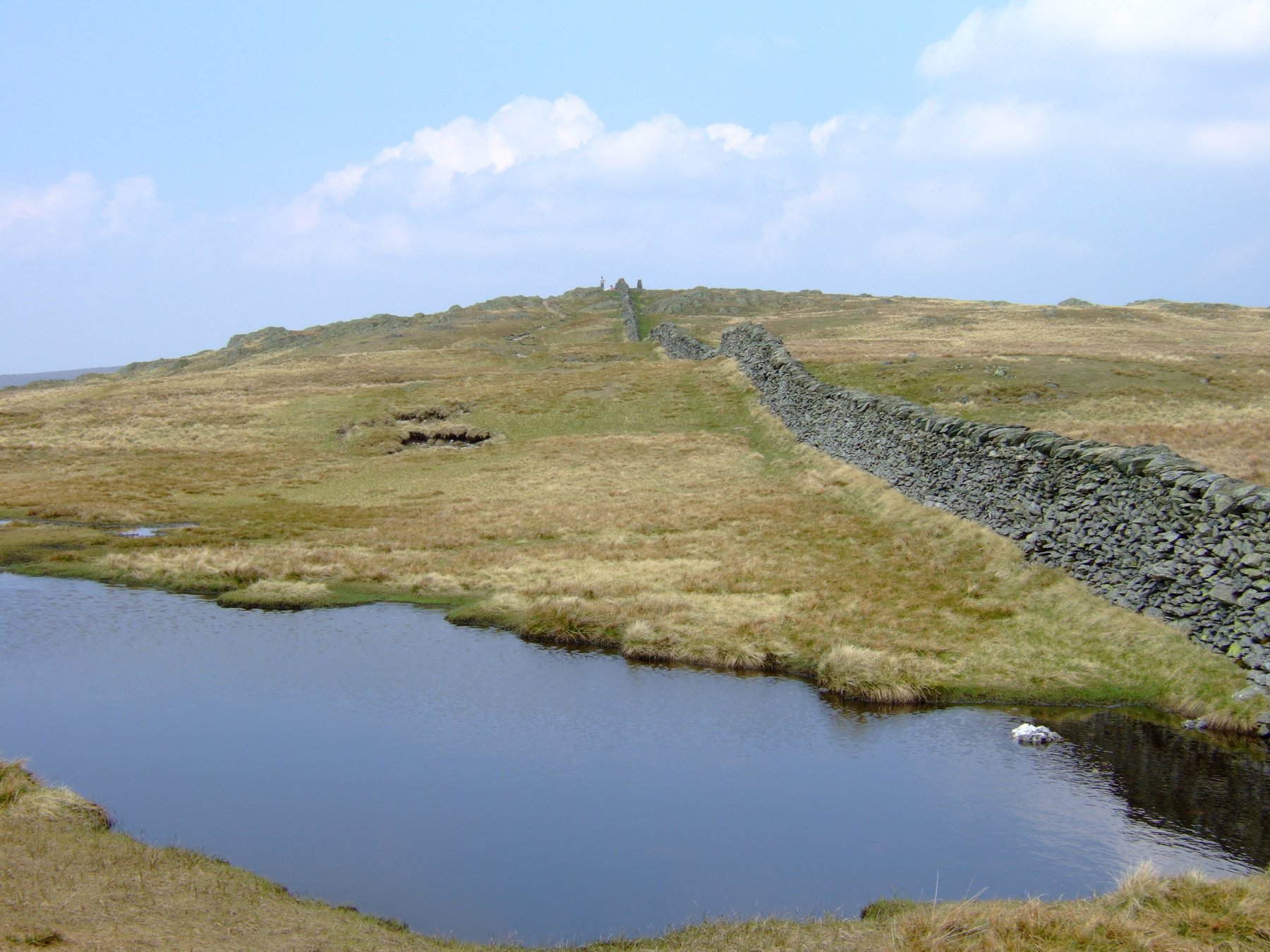 Looking back to the summit of Kentmere Pike 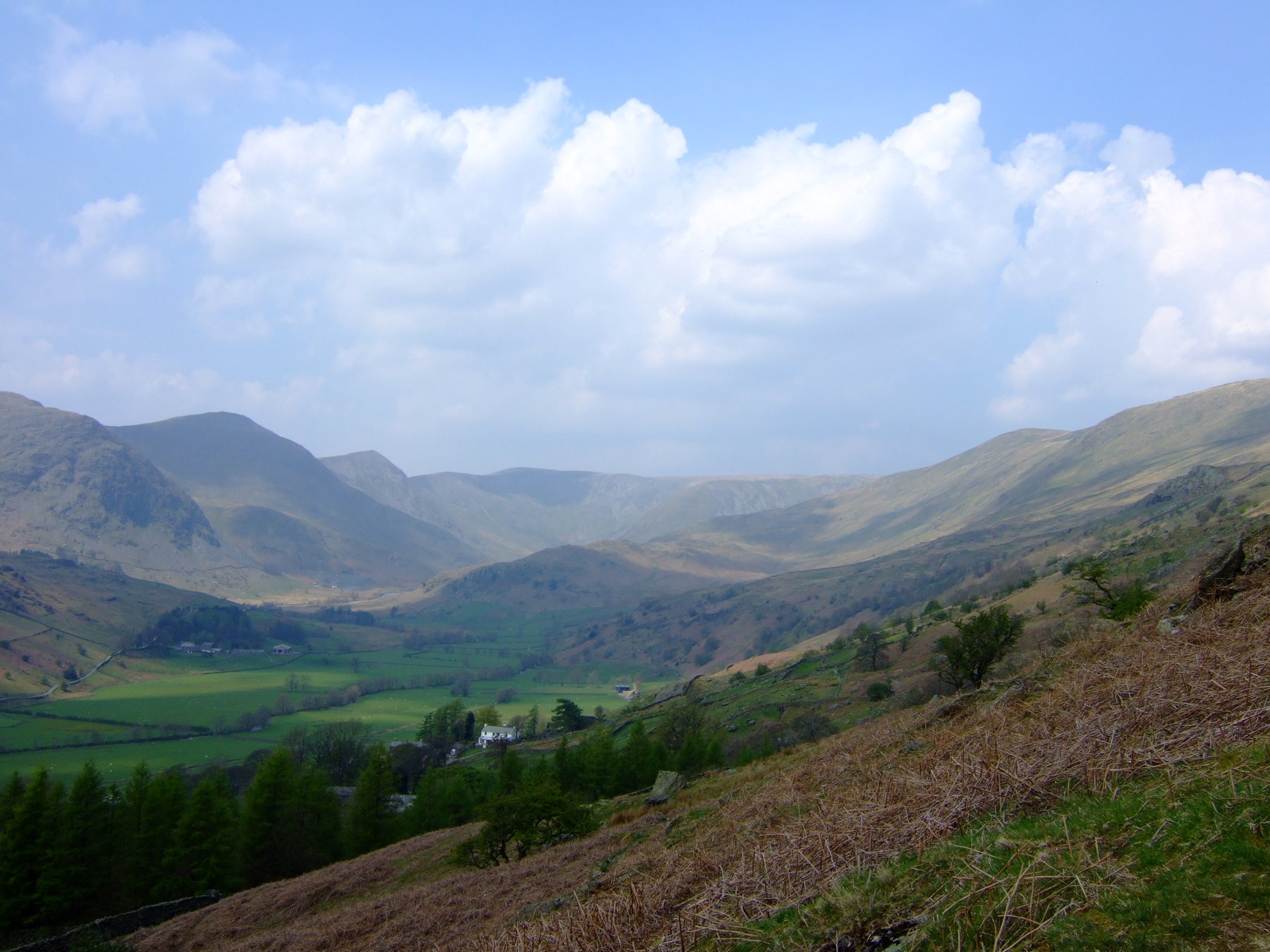 The Kentmere valley and today’s route around the tops

We followed a faint path that leaves the main path from Shipman Knotts, just before its arrival at Wray Crag and this took us down to Stile End. From here we had a great view of the whole of the Kentmere valley and all the tops we had visited during the day. The day was very warm now and I was glad I’d decided to fill my water bladder as full as possible. 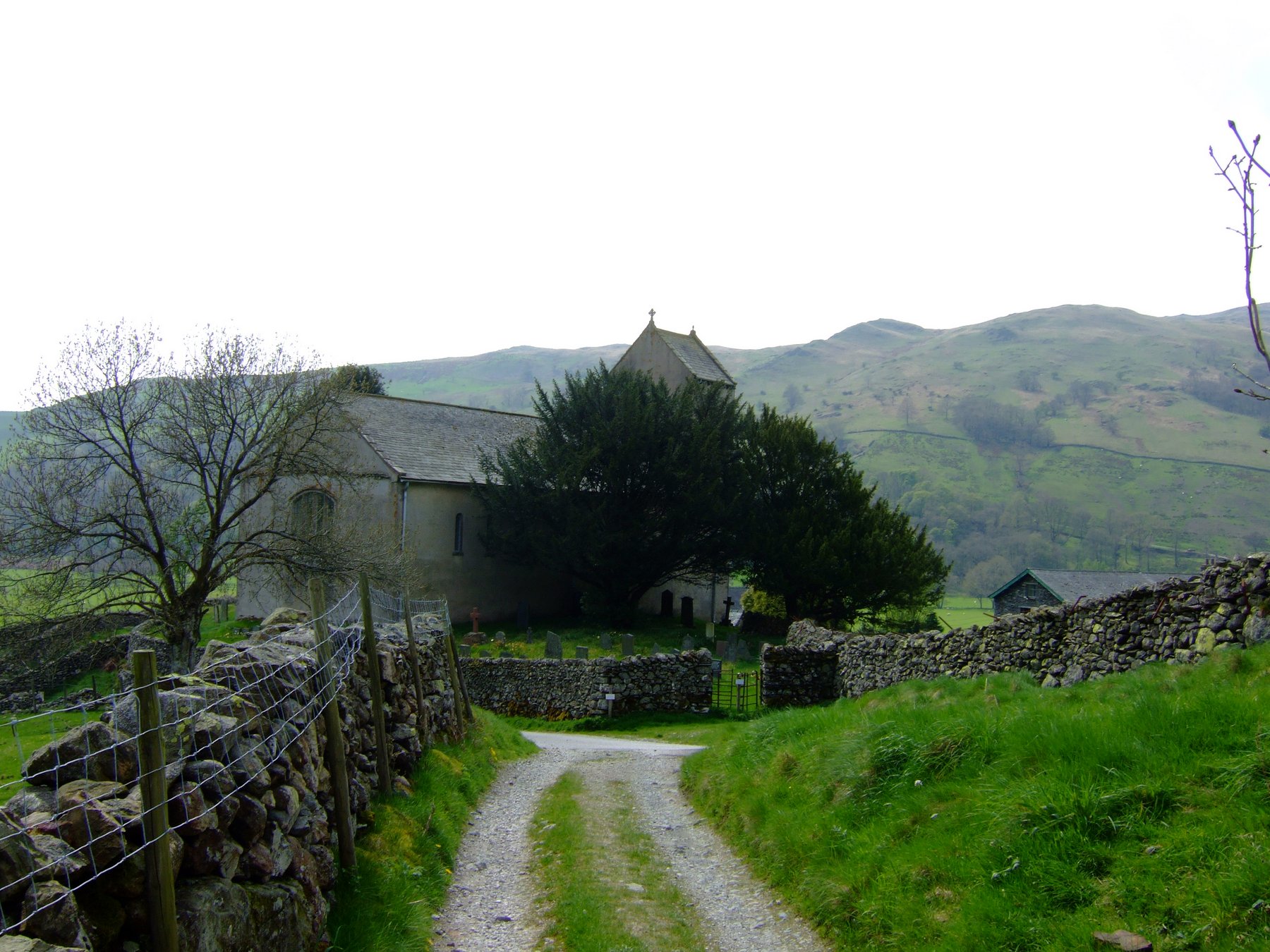 The only nice shot of Kentmere church is from a distance.

We returned to Kentmere village in the early afternoon, to a knot of cars clustered by the church and the welcome relief of the car’s air-conditioning system 🙂

3 thoughts on “Kentmere Round”