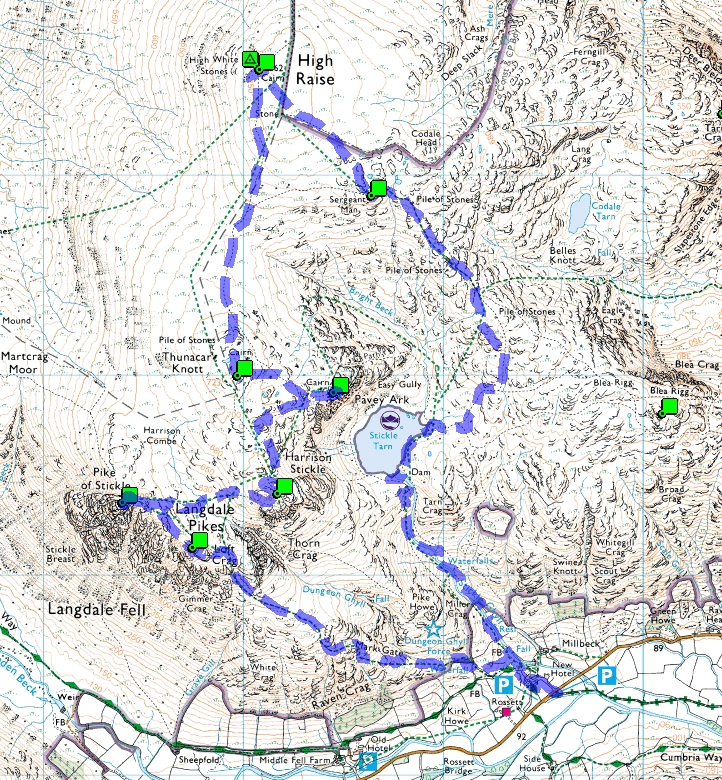 Following the previous weeks great walk around Far Easdale and my new found hill legs, I ventured north again on Saturday morning, hammering up the motorway at 6am to retry a walk I did over the Christmas break.

That attempt had ended in exhaustion and an ignominious slog back the way I had come, barely an hour earlier, passing all the folk just heading up from the car park. My fitness level is now so much greater I felt confident I would be able to manage the ascent and so found myself once again parking the car in the car park opposite the New Dungeon Ghyll Hotel in Langdale.

The walk I had planned ticks off 7 Wainwright’s and a trig point and includes some of the most popular peaks in the Lakes. My plan was to ascend Stickle Ghyll, round the tarn and pick off Sergeant Man on the way to High Raise, then down to Thunacar Knott, Pavey Ark, up and over Harrison Stickle, swing out to Pike of Stickle and back over Loft Crag and the path along Dungeon Ghyll back to the car. 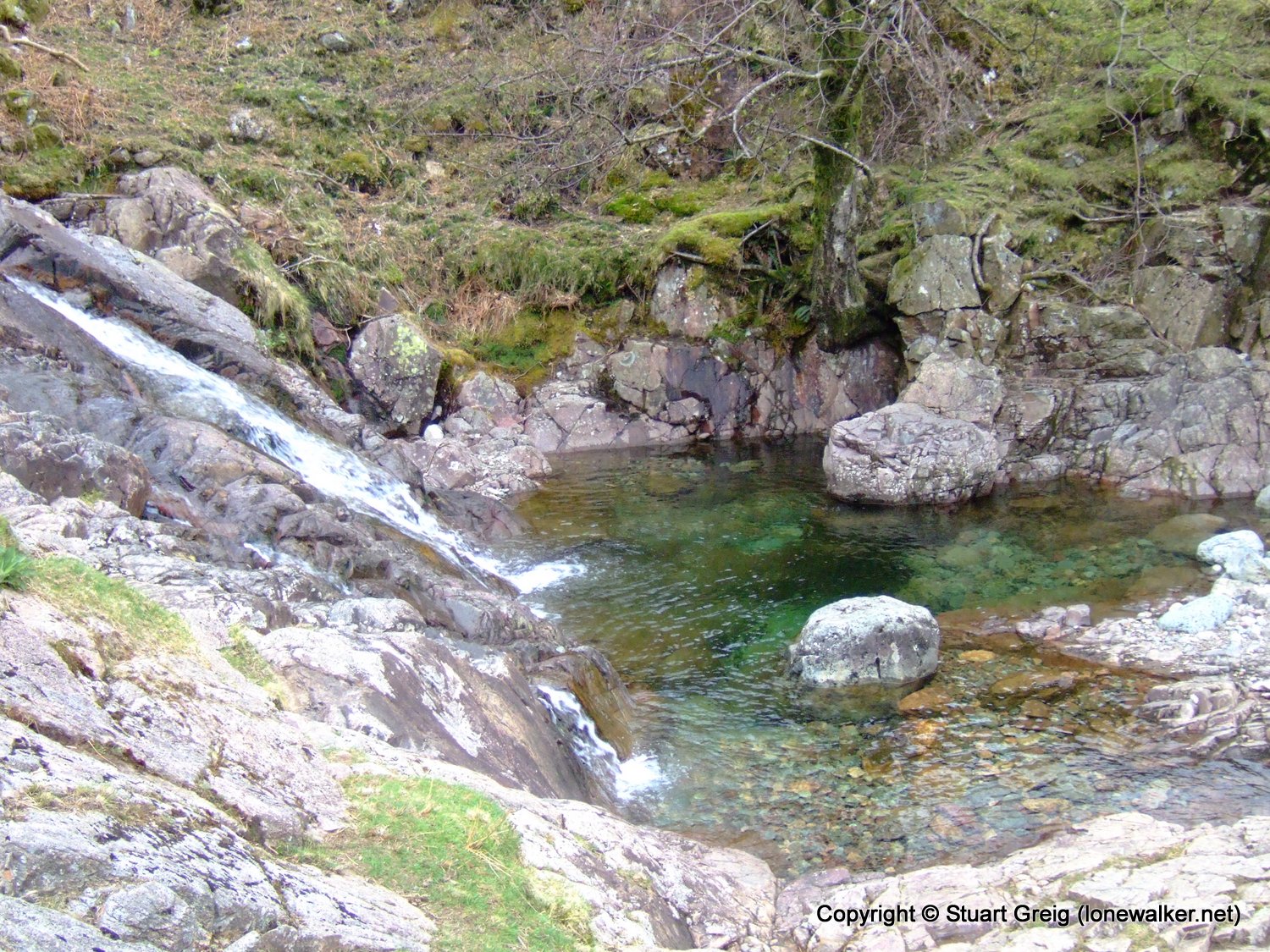 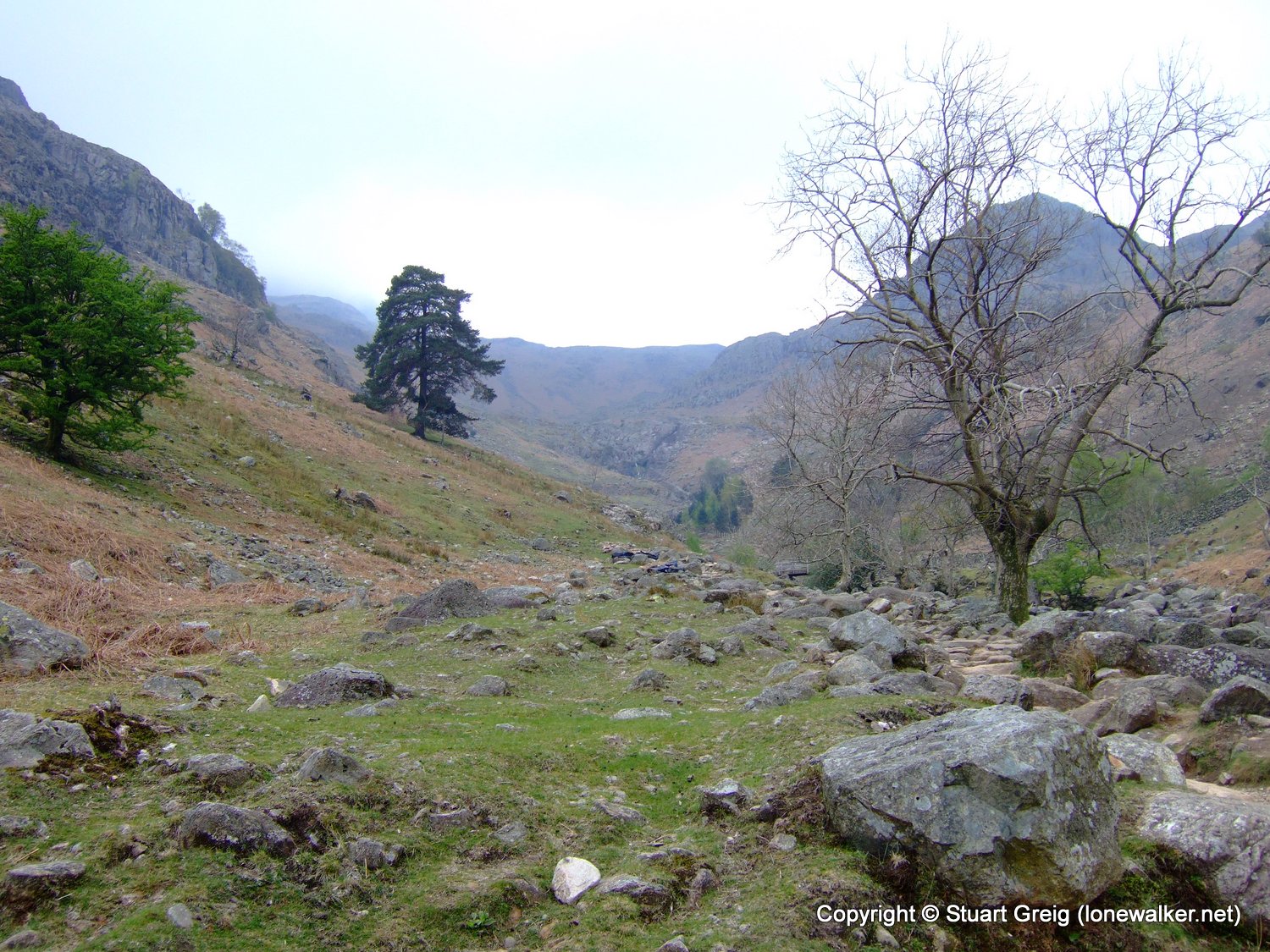 Path up to Stickle Tarn alongside Stickle Ghyll

In December it took me an hour to reach the dam at Stickle Tarn, a very painful and exhausting hour. On this visit it took me 40 minutes, was nothing like as painful and required surprisingly few stops for breath. 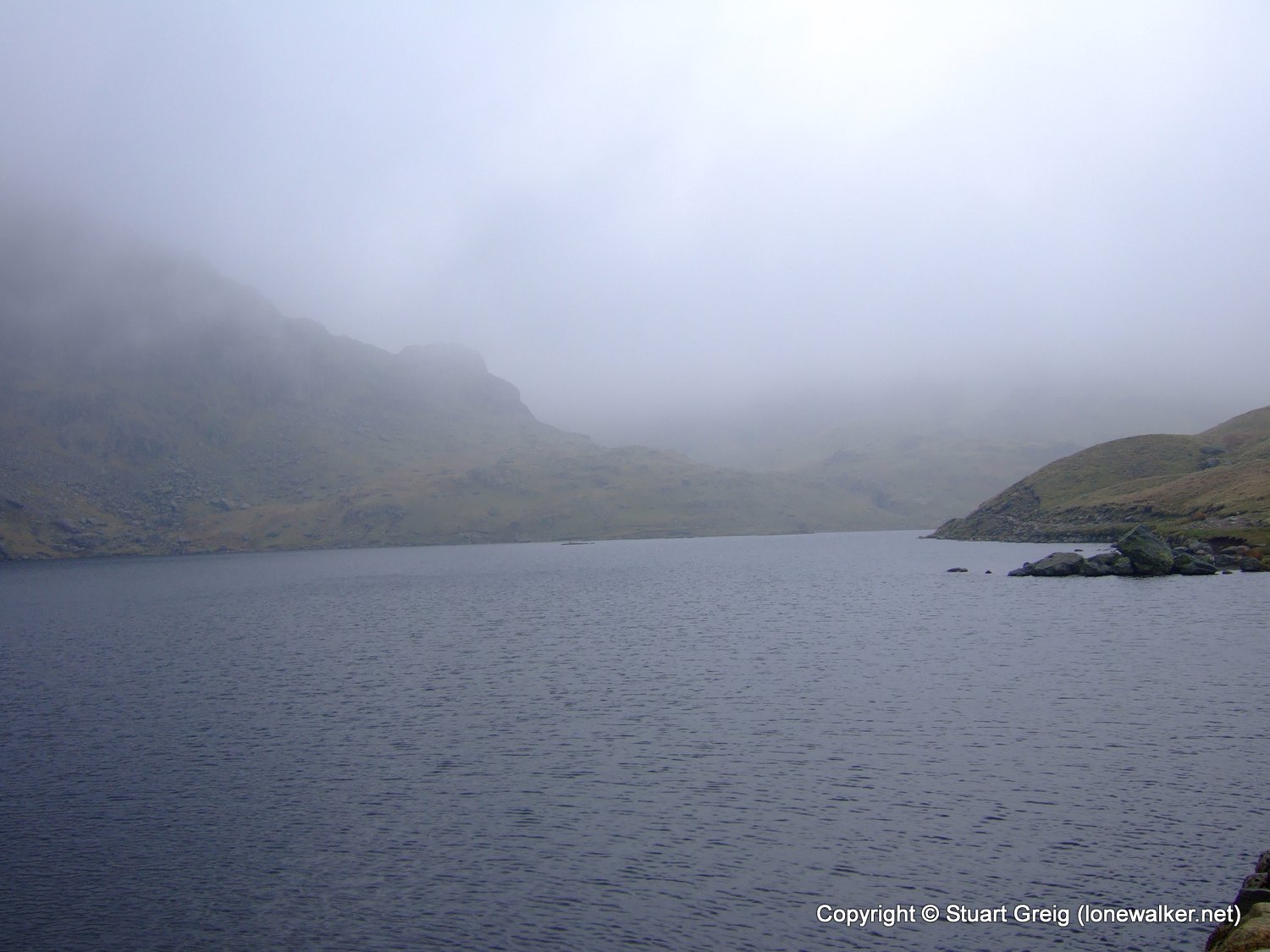 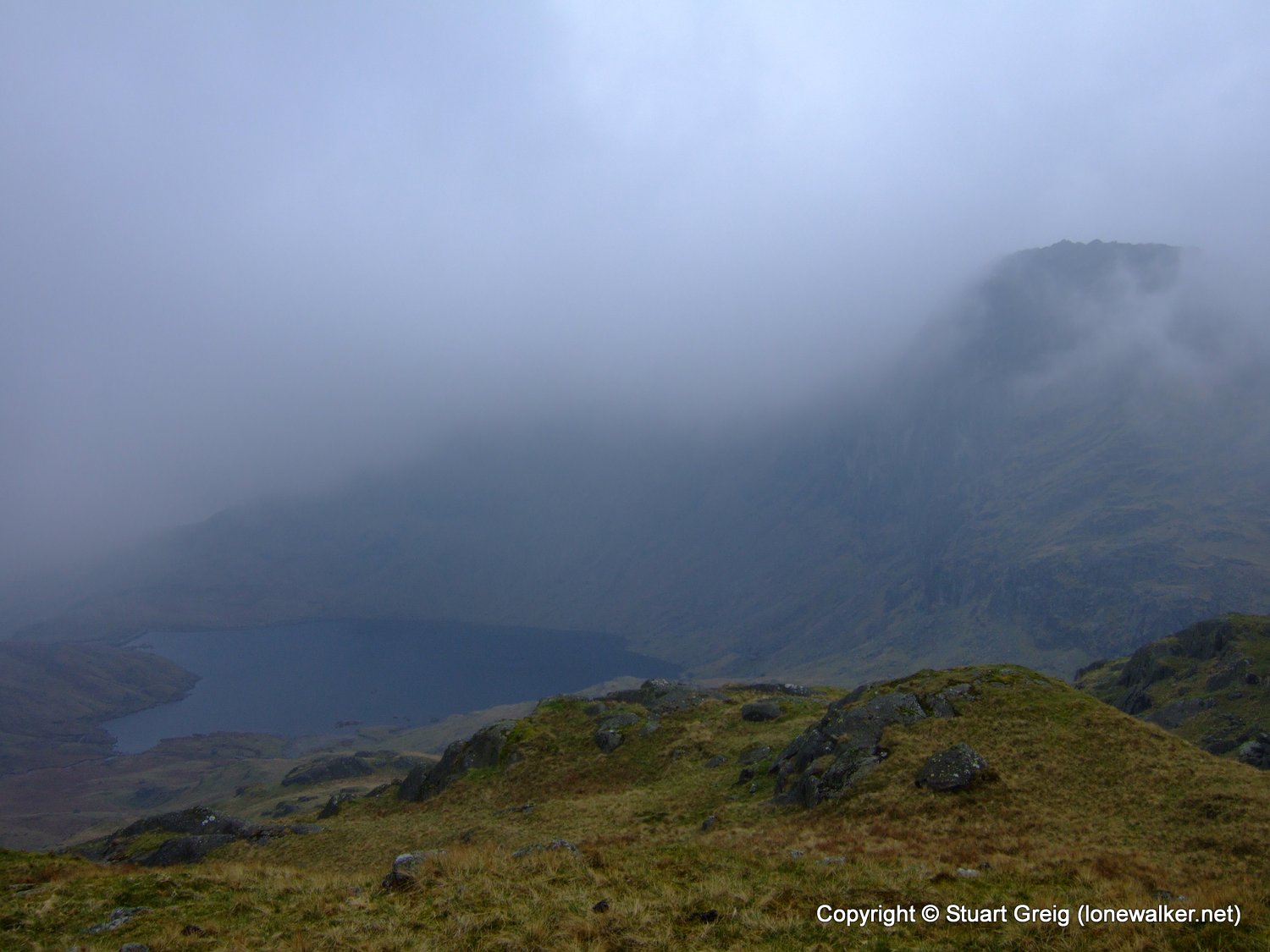 Pavey Ark looming out of the mist above Stickle Tarn

I was a bit disappointed as I reached the tarn, to see the mist covering the surrounding tops, it looked like today could be a complete white-out. I pushed on though, using the GPS to find the track up to Sergeant Man, there are occasional cairns along the way, but either I kept moving away from the track or there aren’t enough to rely on for navigation. It was still early so I wasn’t expecting to find three blokes ahead of me as the mists suddenly parted to reveal them on the rockly outline of Sergeant Man. Our paths criss-crossed several times that morning. I left them at the foot of the hill, looking at their map and I headed off towards High Raise, still relying on the GPS for the heading. Its an easy walk across springy turf, past a few ethereal sheep drifting in and out of view and an easy to follow path leading all the way to the stone built trig by the huge, low shelter. 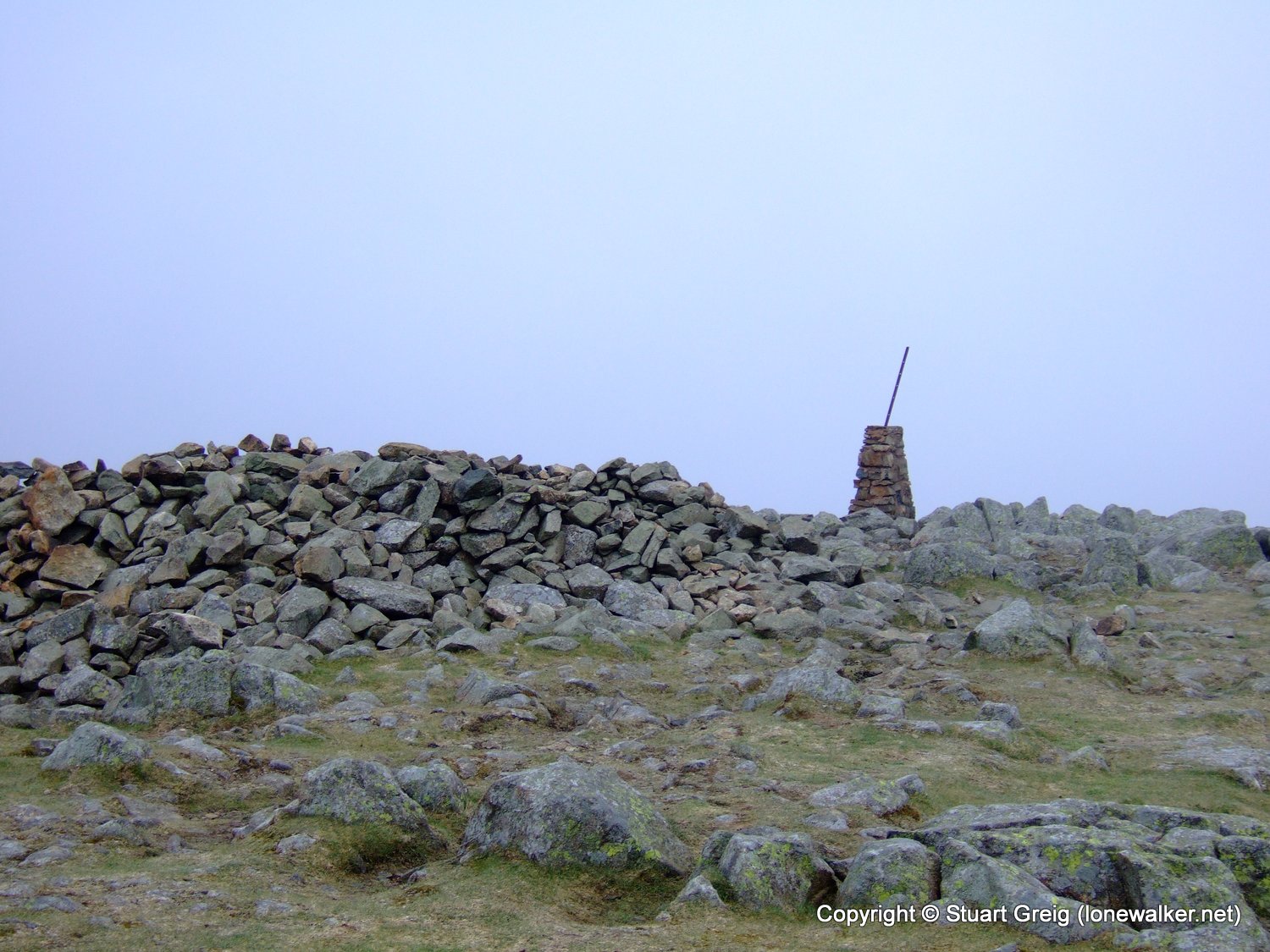 I didn’t hang around on the summit, there was no view at all and it was very chilly, I’d already donned hat, coat and gloves and hoped that losing some altitude would improve the situation. 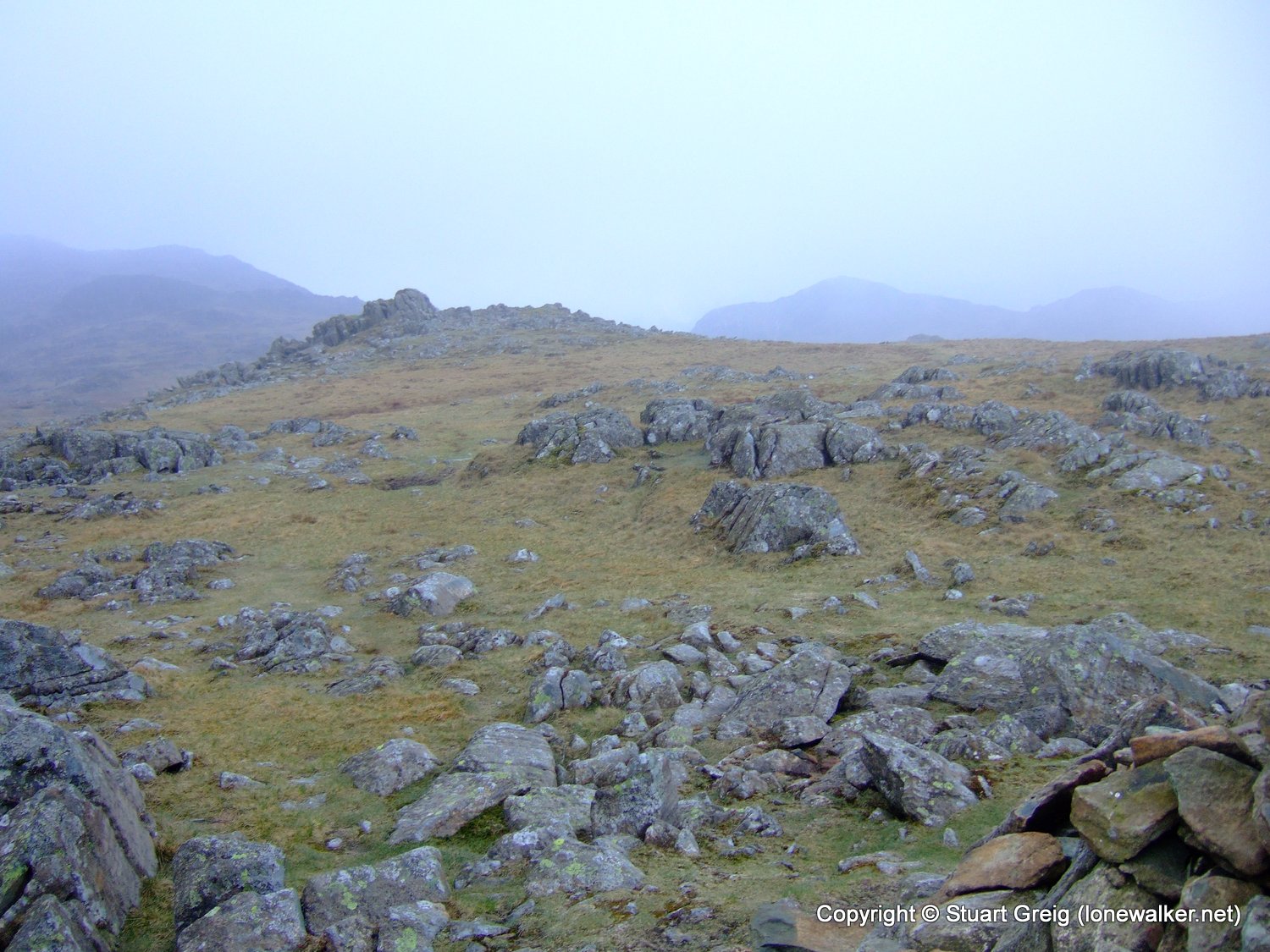 The rocky “summit” of Thunacar Knott

I stopped at Thunacar Knott, the days third Wainwright, being a rather unimpressive rocky mound slightly off the main track from High Raise to Harrison Stickle.

Pavey Ark and Harrison Stickle on the other hand are grand rocky peaks with an enormous drop-off down to Stickle Tarn. Both are excellent scrambling locations with fine sweeping vistas across Langdale and the eastern Lakes. Although visibilty was now much improved, it still didn’t provide the great panoramas that I was hoping for. However, after expecting a white-out, I was very happy. 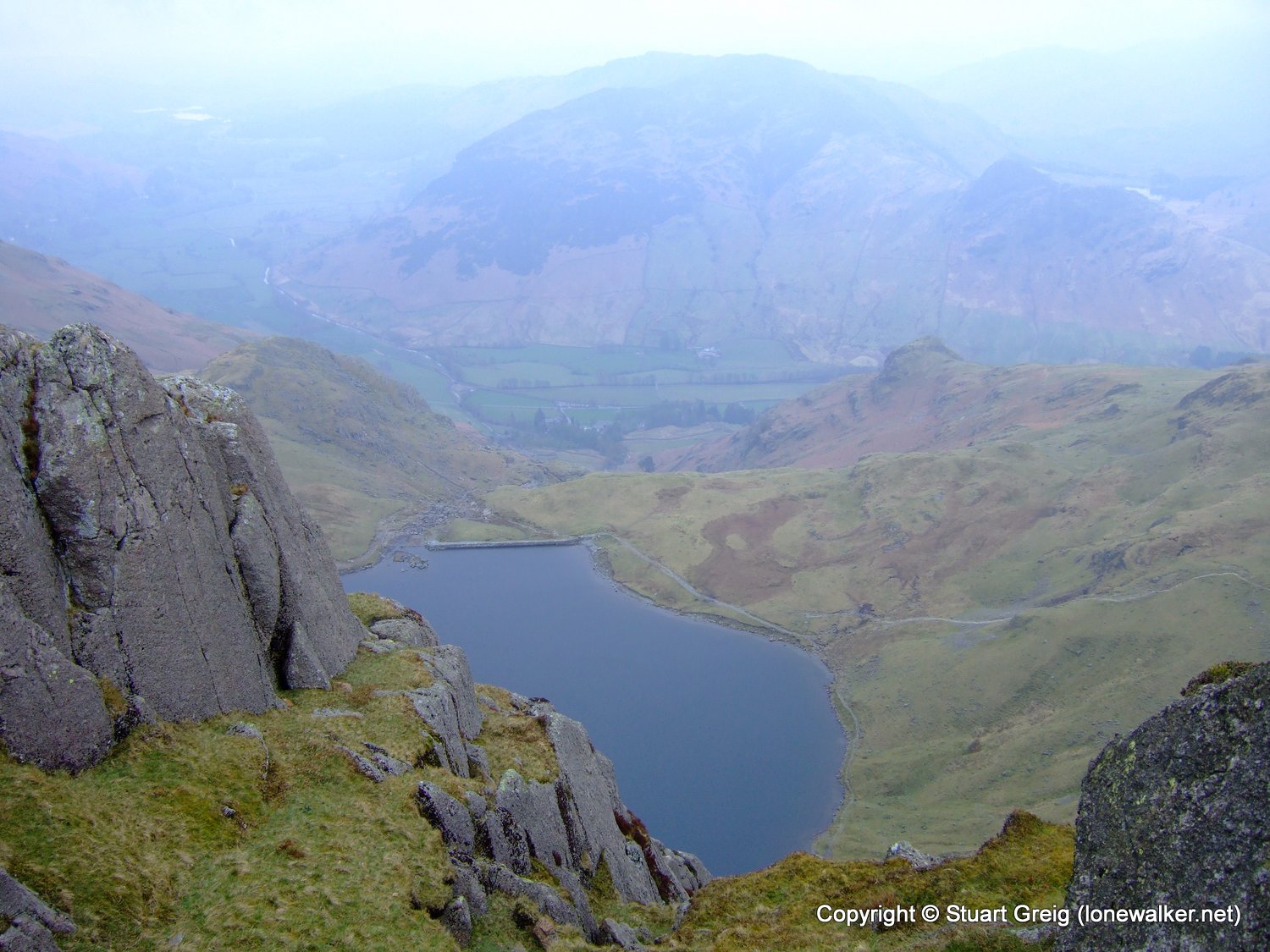 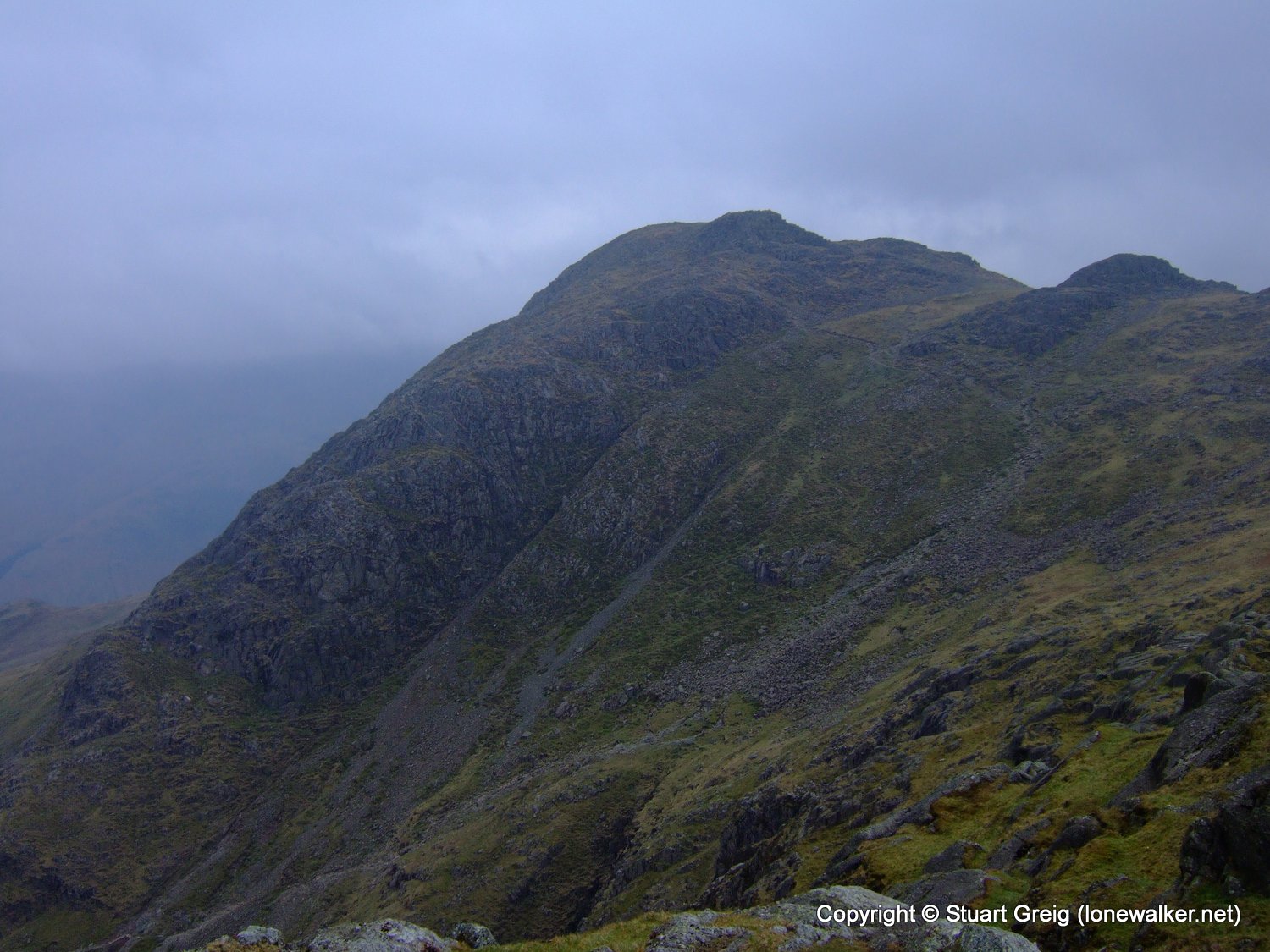 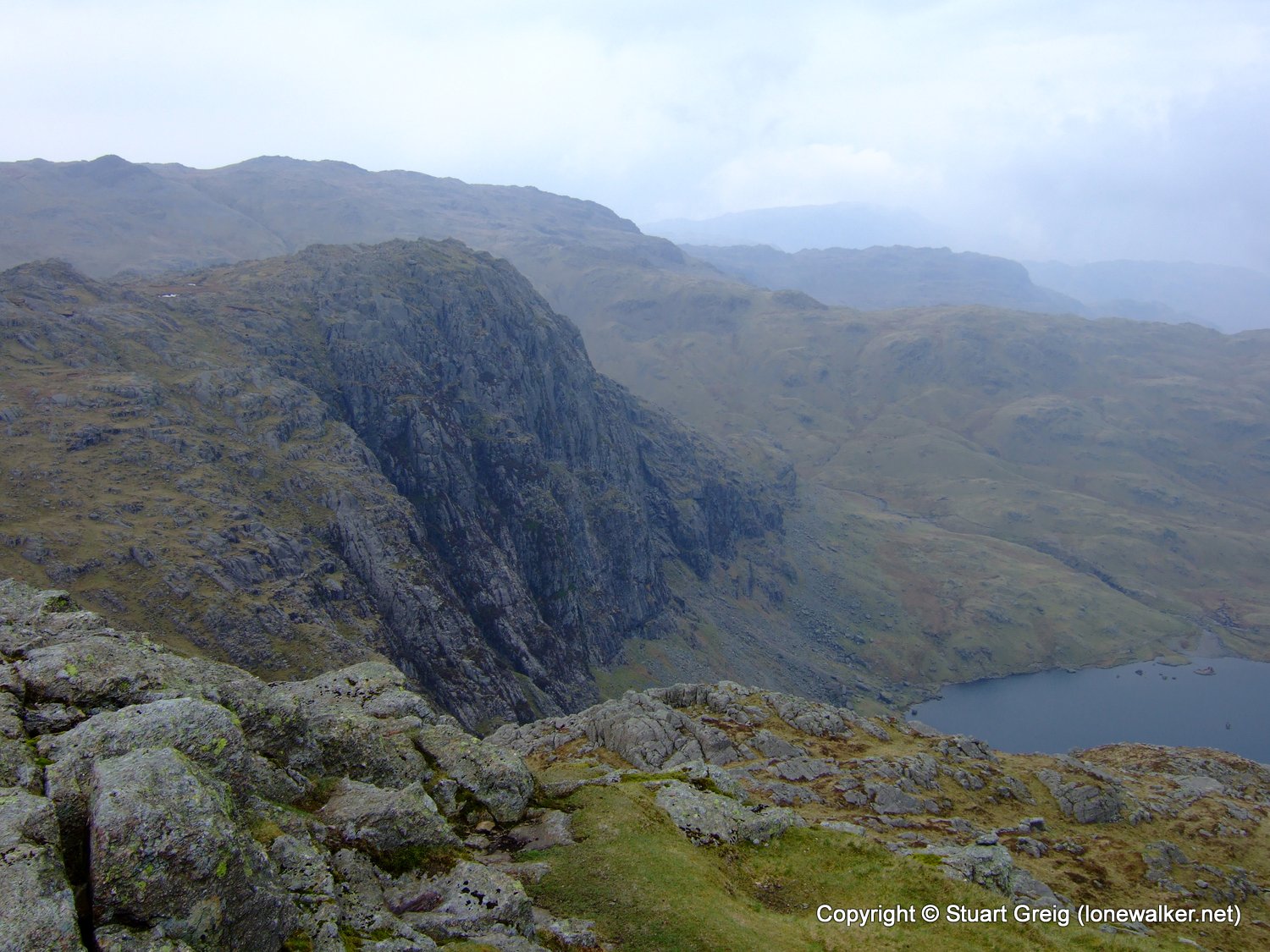 I spent some time clambering around on Pavey Ark, looking for the summit, there is no summit cairn that I could see, but I’m fairly sure I covered the high point, before dropping down across the col to its slightly bigger brother Harrison Stickle, where an obvious summit cairn is easily found. 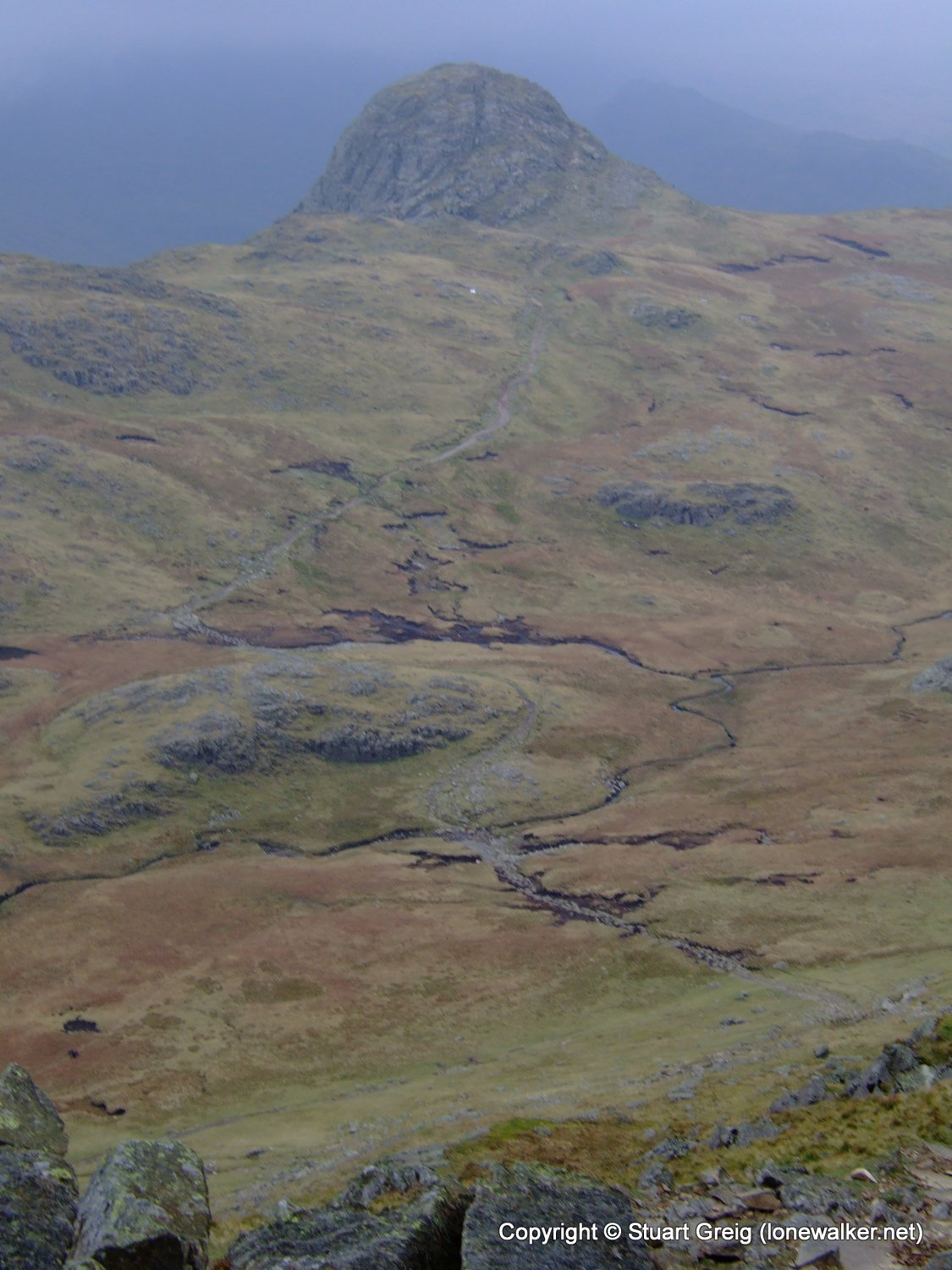 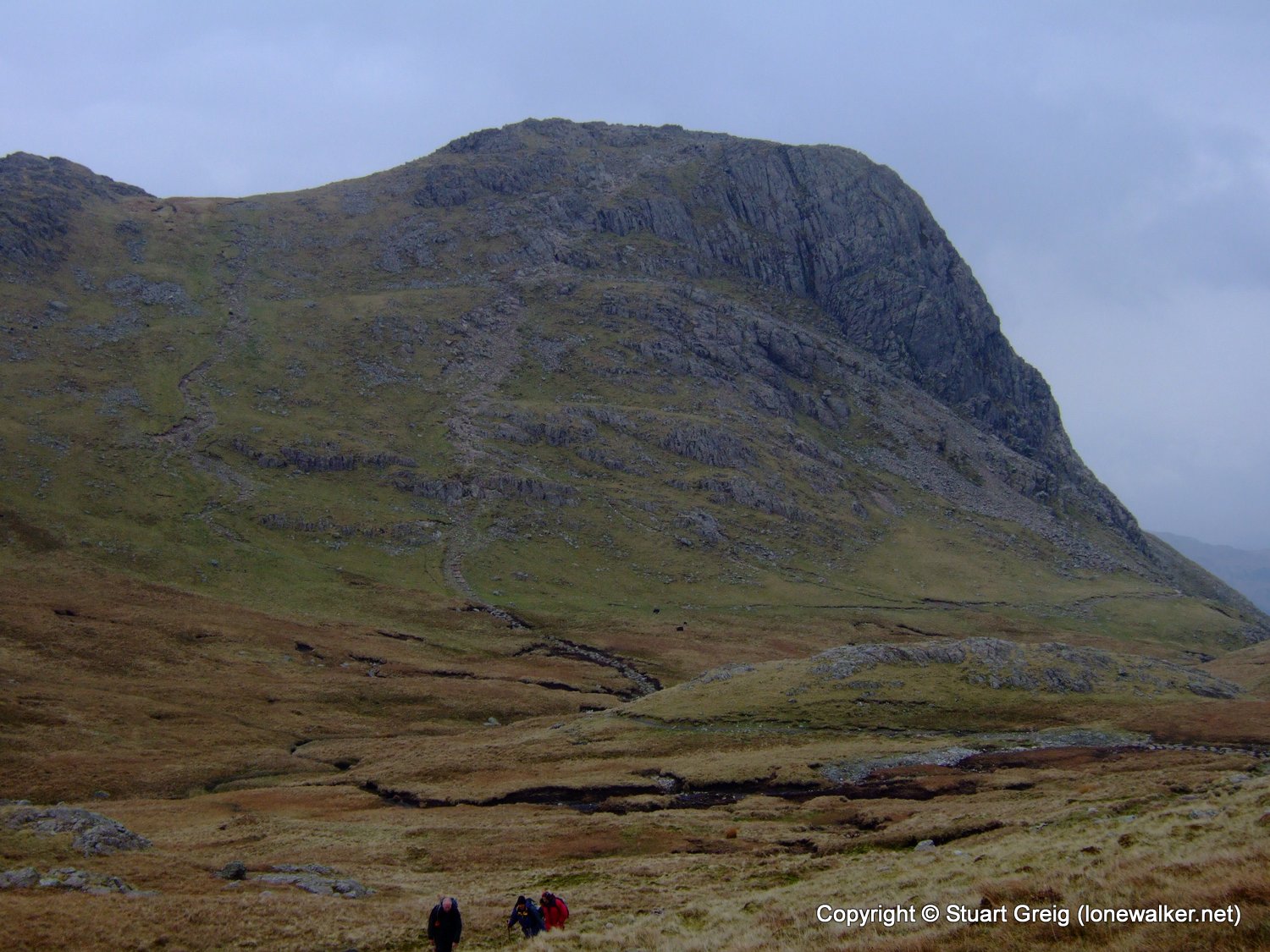 A steep ascent provides a breathtaking view across the Langdale Pikes and Harrison Combe with the huge lump of Pike of Stickle dominating the horizon. It looks like a stiff steep climb up to the summit but my new found fitness keeps surprising me and I only needed a short breather and a drink to see me across and up the lump.

Harrison Stickle is even more impressive from this view point, on the top of Pike of Stickle and the final Wainwright of the day is also shown here on the right. 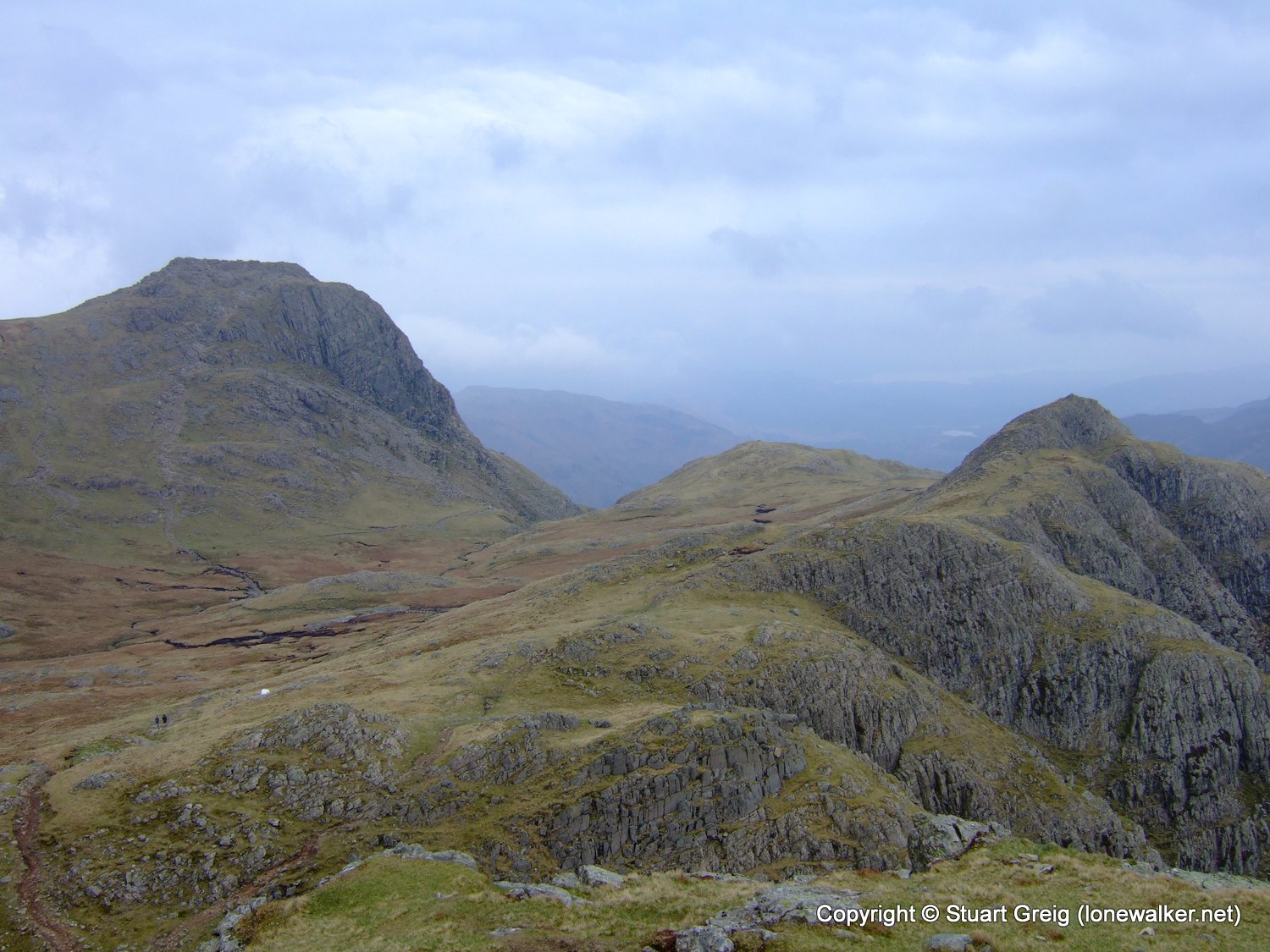 Harrison Stickle and Loft Crag from Pike of Stickle 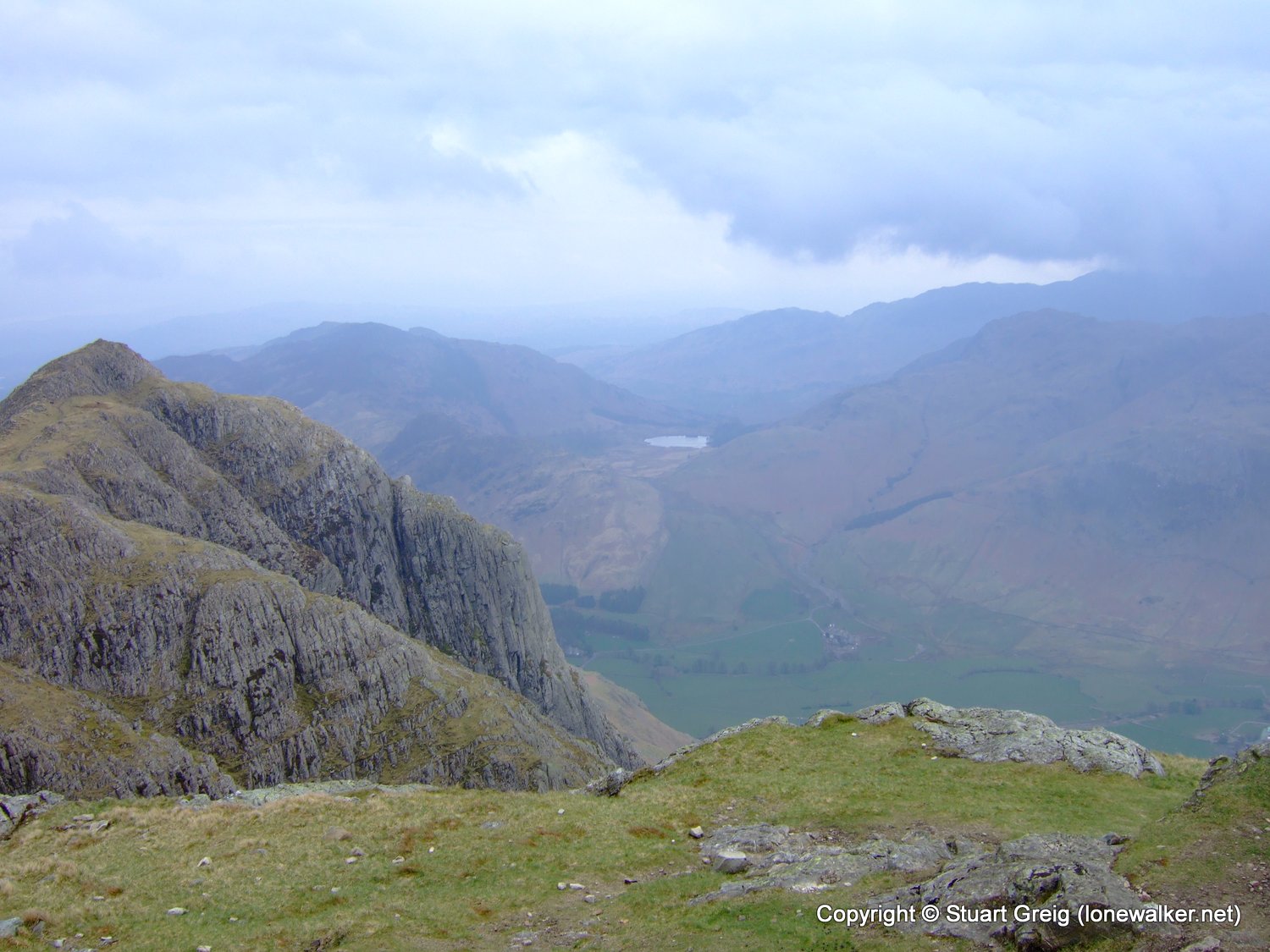 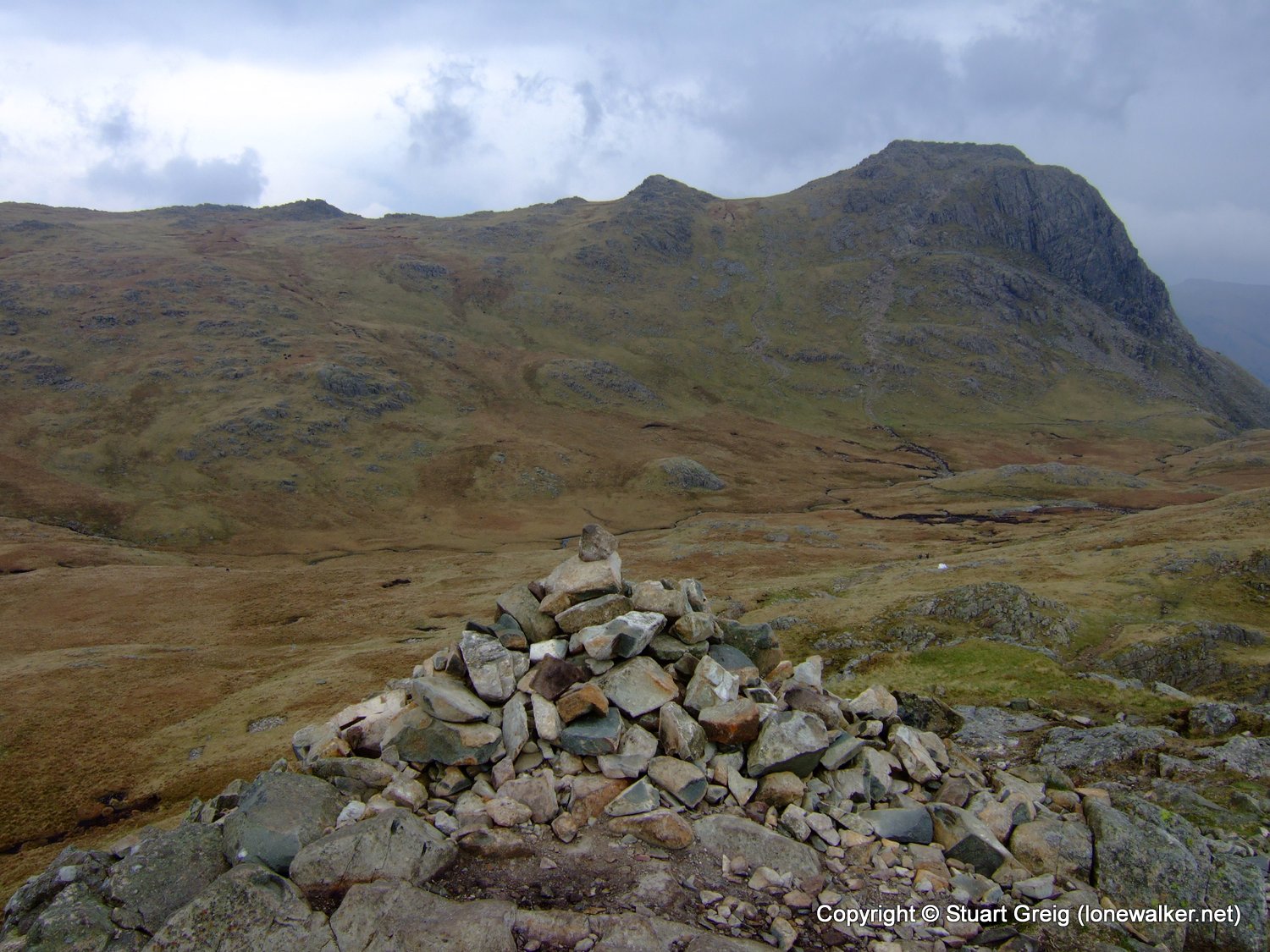 Summit cairn on Pike of Stickle

Loft Crag summit was soon attained with a wave to the three walkers from earlier, now standing on Pike of Stickle. 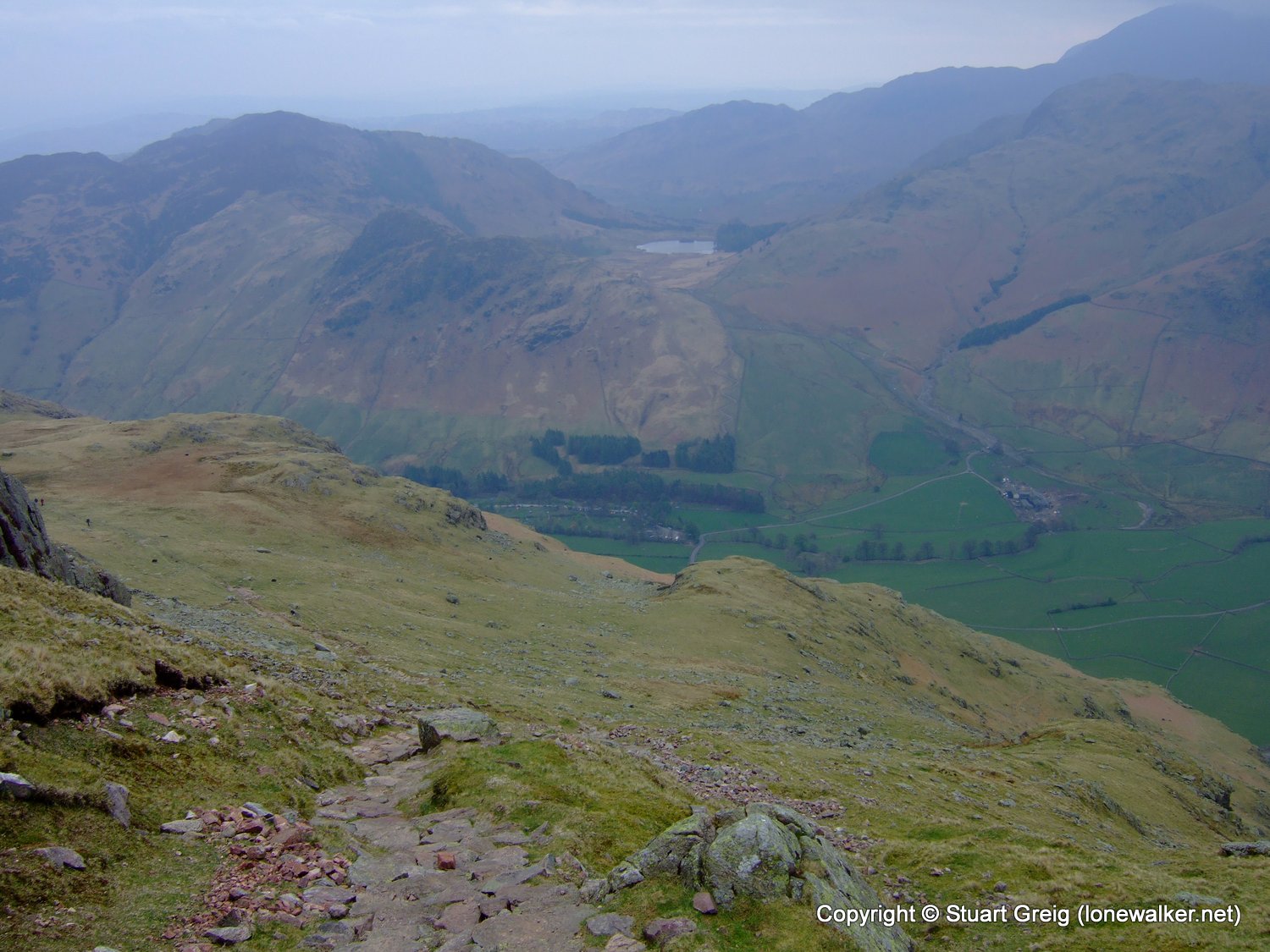 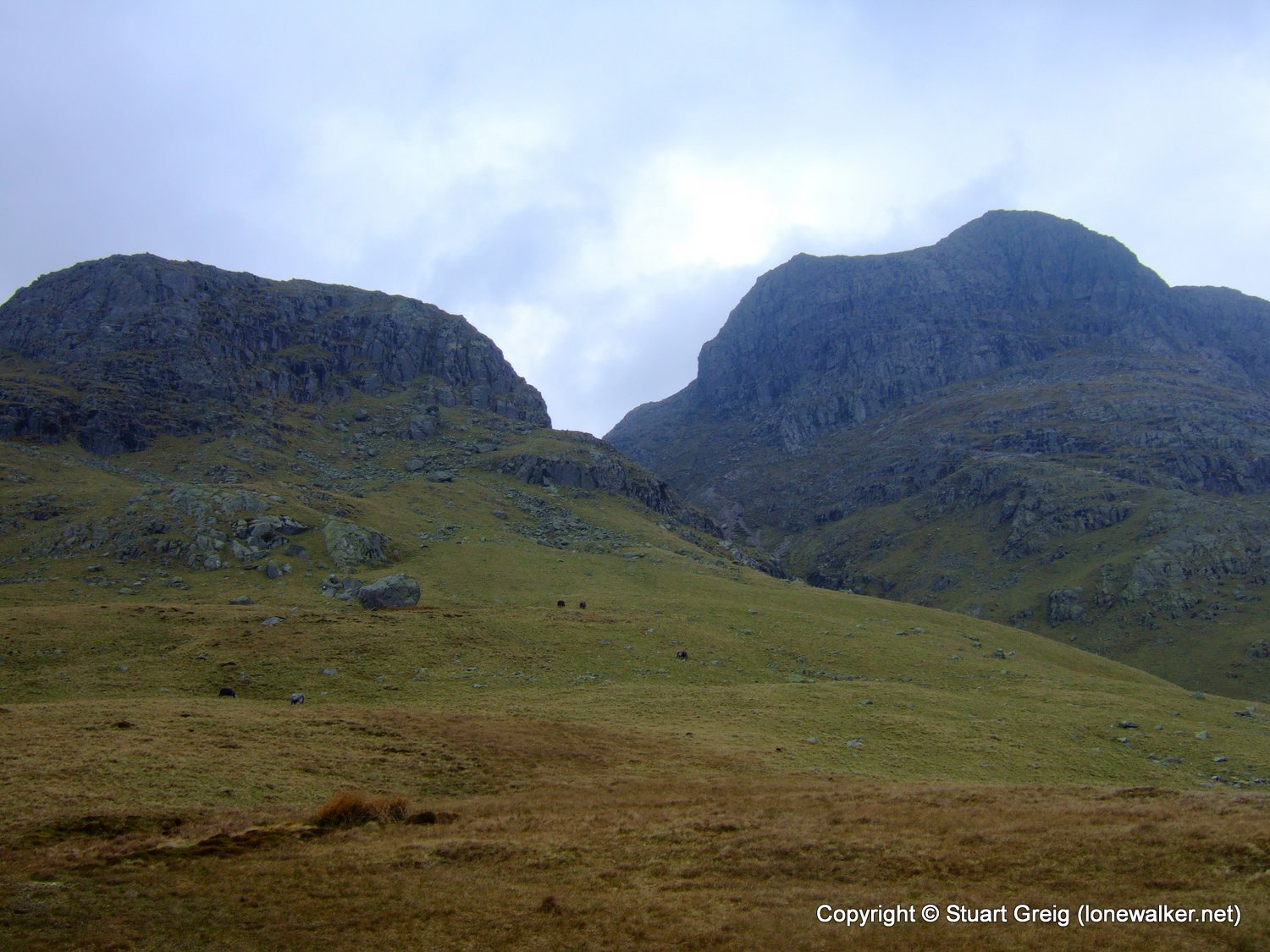 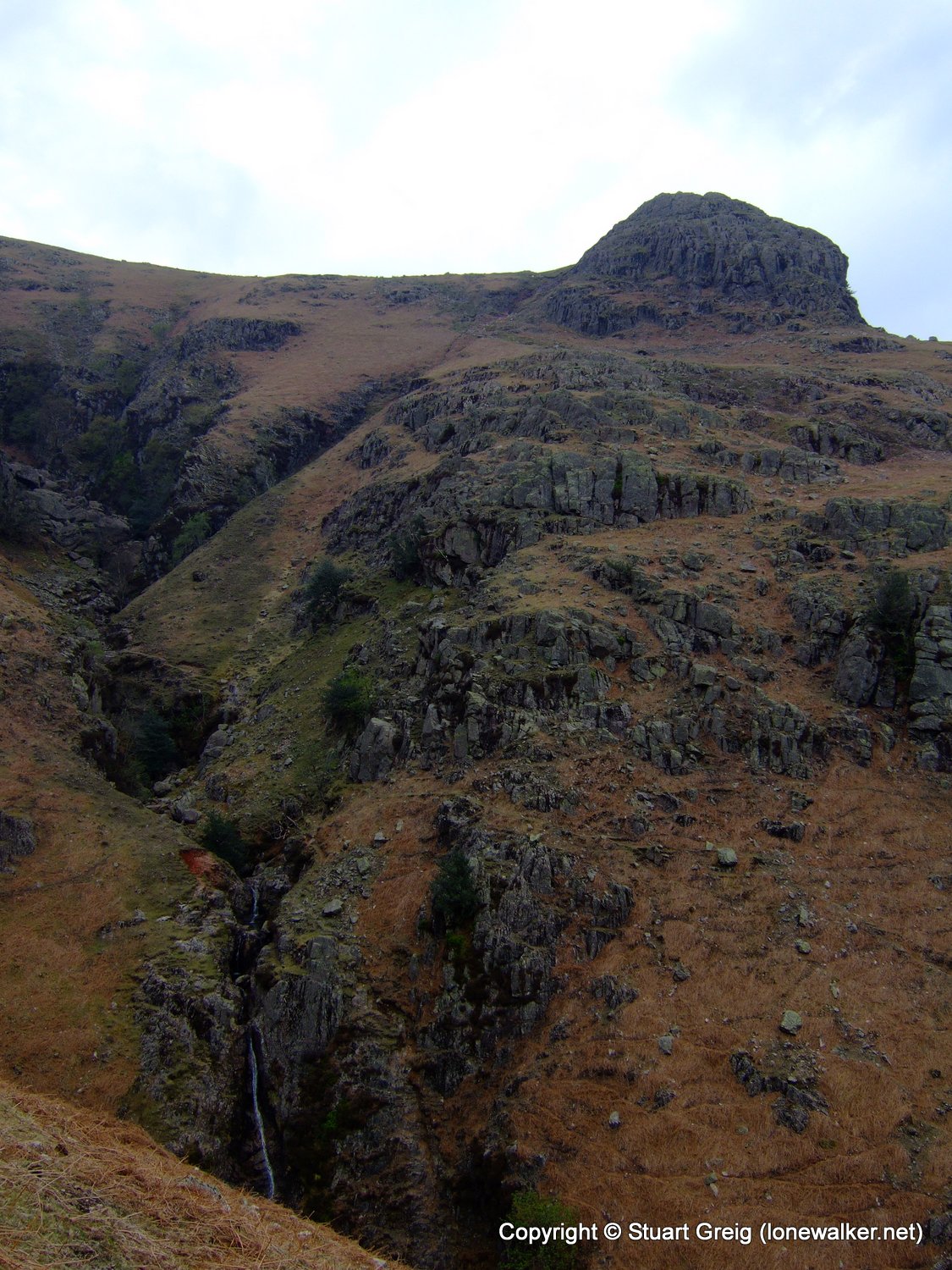 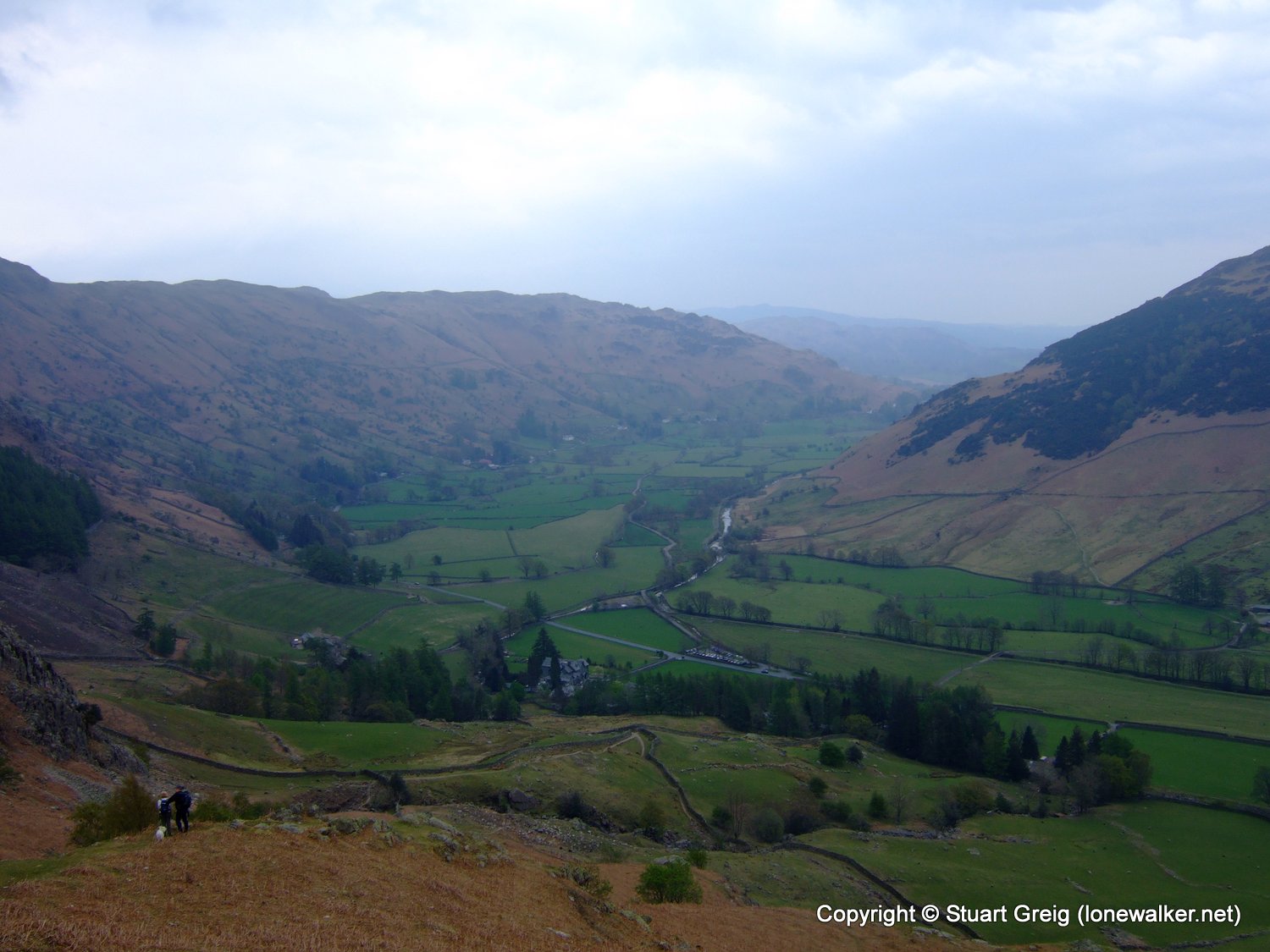 The path down is steep and long and the knees were complaining by the time I got back to the car. They were easily forgotten though as I believe I have finally got back most of the fitness I attained prior to the coast to coast last year. We shall see though, as next weekend I’m planning on tackling my highest peak ever – alright its not Ben Nevis, but its higher than Coniston Old Man, my previous highpoint…..