Download file for GPS
It was real shame. The weather today was predicted to be the best it had been for ages – cold and crisp was the forecast with not much wind and certainly no rain. The shame of it was, I wasn’t really feeling up for it today. Unlike the last couple of weeks, when the forecast had been dreadful and I’d been gagging for a good walk. Today I lay in bed as the alarm clock woke me and I nearly turned over and ignored it. It was only the thought of losing a good winters day walking that actually spurred me to kick the duvet off and head for the hills.

I’d selected Red Screes, from the endless possibilities the Lakes has to offer. Hill selection is often done methodically, part of the Wainwright Project, but today was different, I’d plucked the hill from thin air and it felt right – I even knew where I wanted to walk it from; Cow Bridge beside Brothers Water.

I’d selected a fairly short route, but with a fair amount of ascent; up the steep face of Middle Dodd, onto Red Screes then along the ridge to Little Hart Crag, out and back to bag High Hartsop Dodd then along to Dove Crag, Hart Crag and finally Hartsop above How before returning to the car along the ridge line. 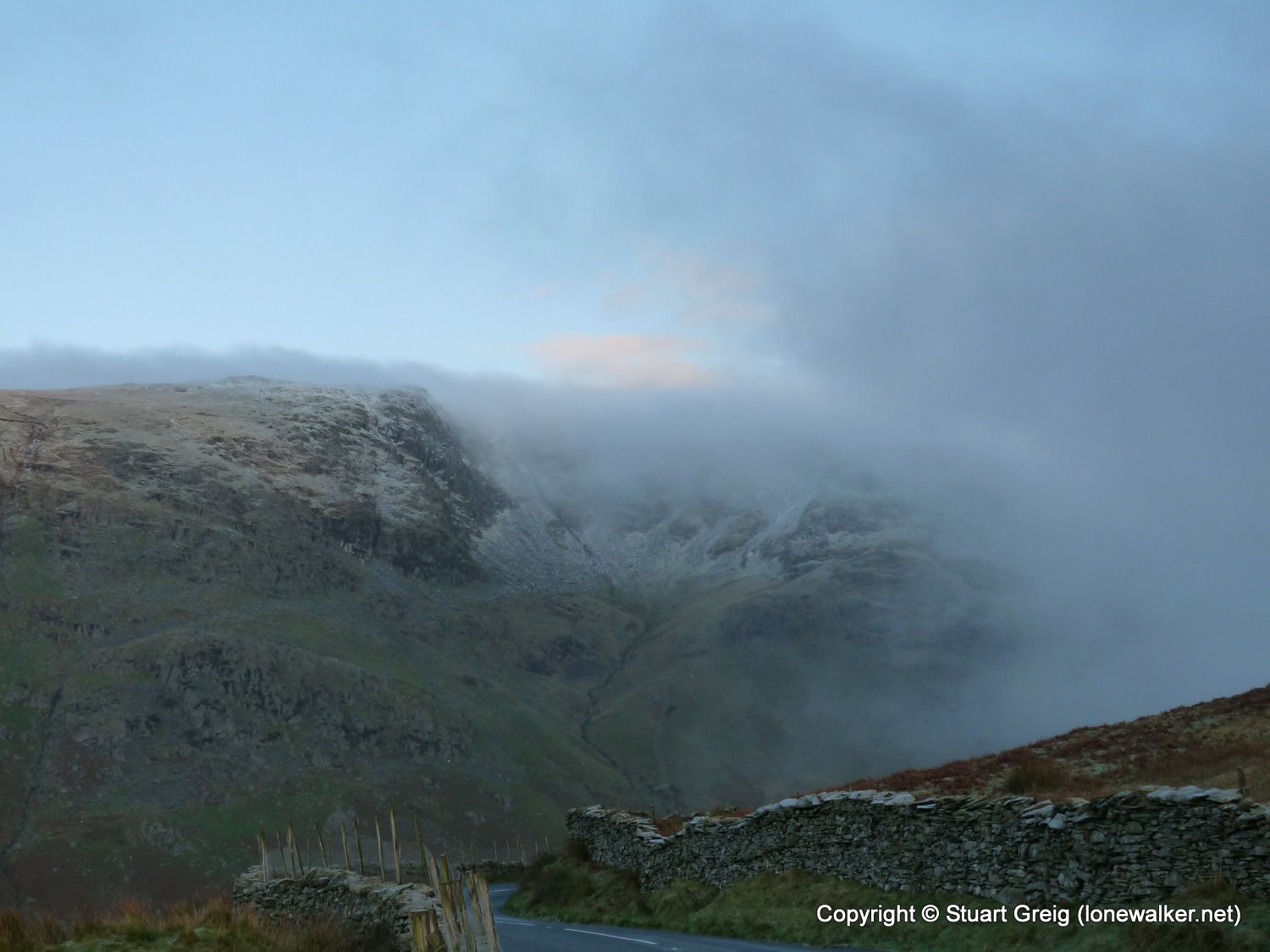 The drive in was fantastic and somewhat scary. Many of the tops were unexpectedly covered in snow and the black ice on the Kirkstone Pass road was certainly a surprise – I very nearly stuck the nose of the car into the wall beside the road. Red Screes was one of the few hills covered in cloud, but the signs looked promising that this would soon clear. 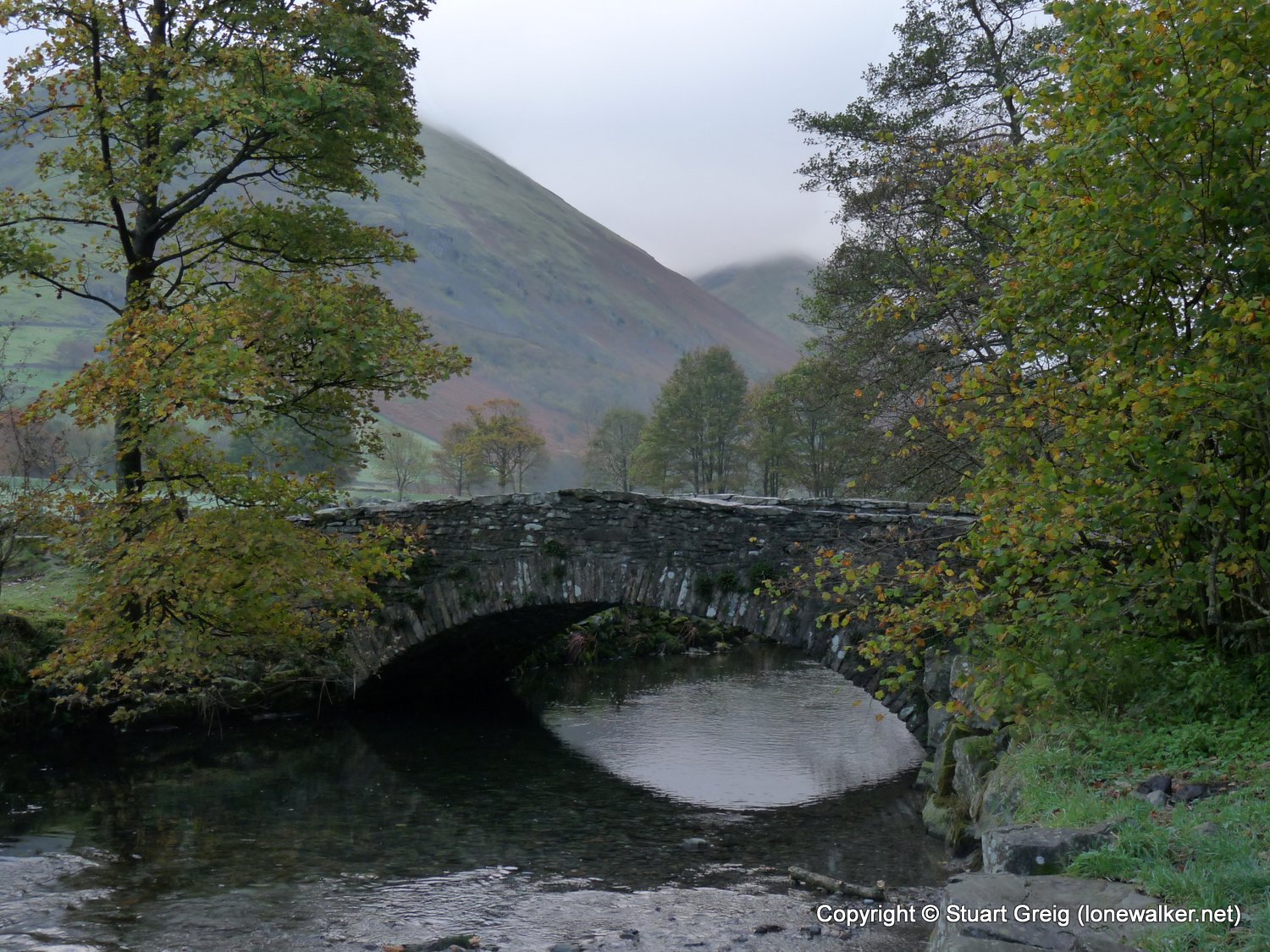 I left the car in the small car park at Cow Bridge and followed the path beside Brothers Water. The path provides fine views to the surrounding fells and particularly up into Dovedale. 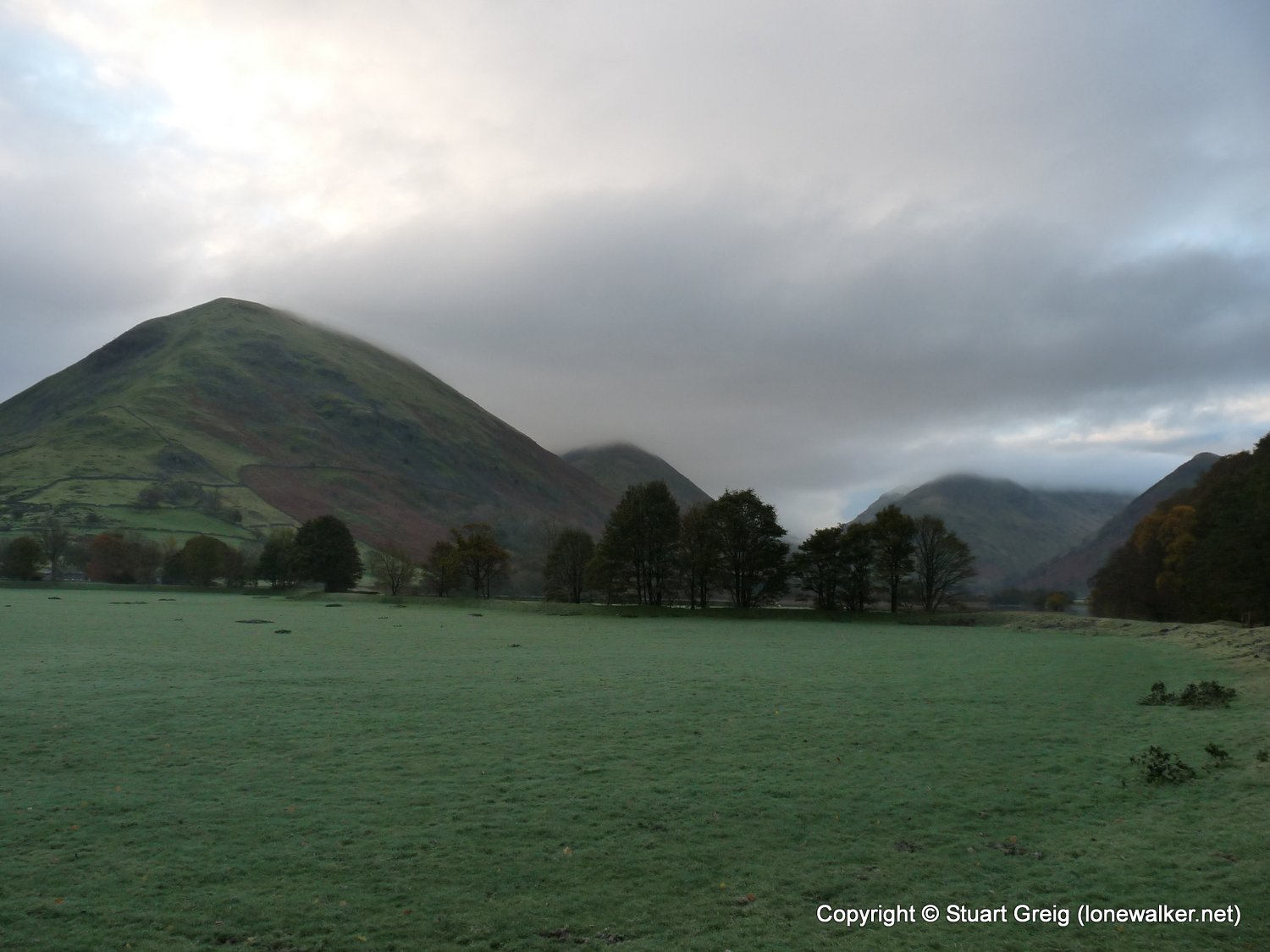 Looking ahead to Brothers Water; Hartsop Dodd on the left of shot

Brothers Water has a small stony beach beside the path and the perfectly still lake mirrored the flanking mountains, just a slight hint of mist lingering on the surface of the water. I could have happily stayed here for ages – it was so quiet and peaceful. The hills at this time of year are an incredible colour; some of the green has turned to brown as the bracken dies back, but there is also the hint of purple in the tiny flowers of the heather. 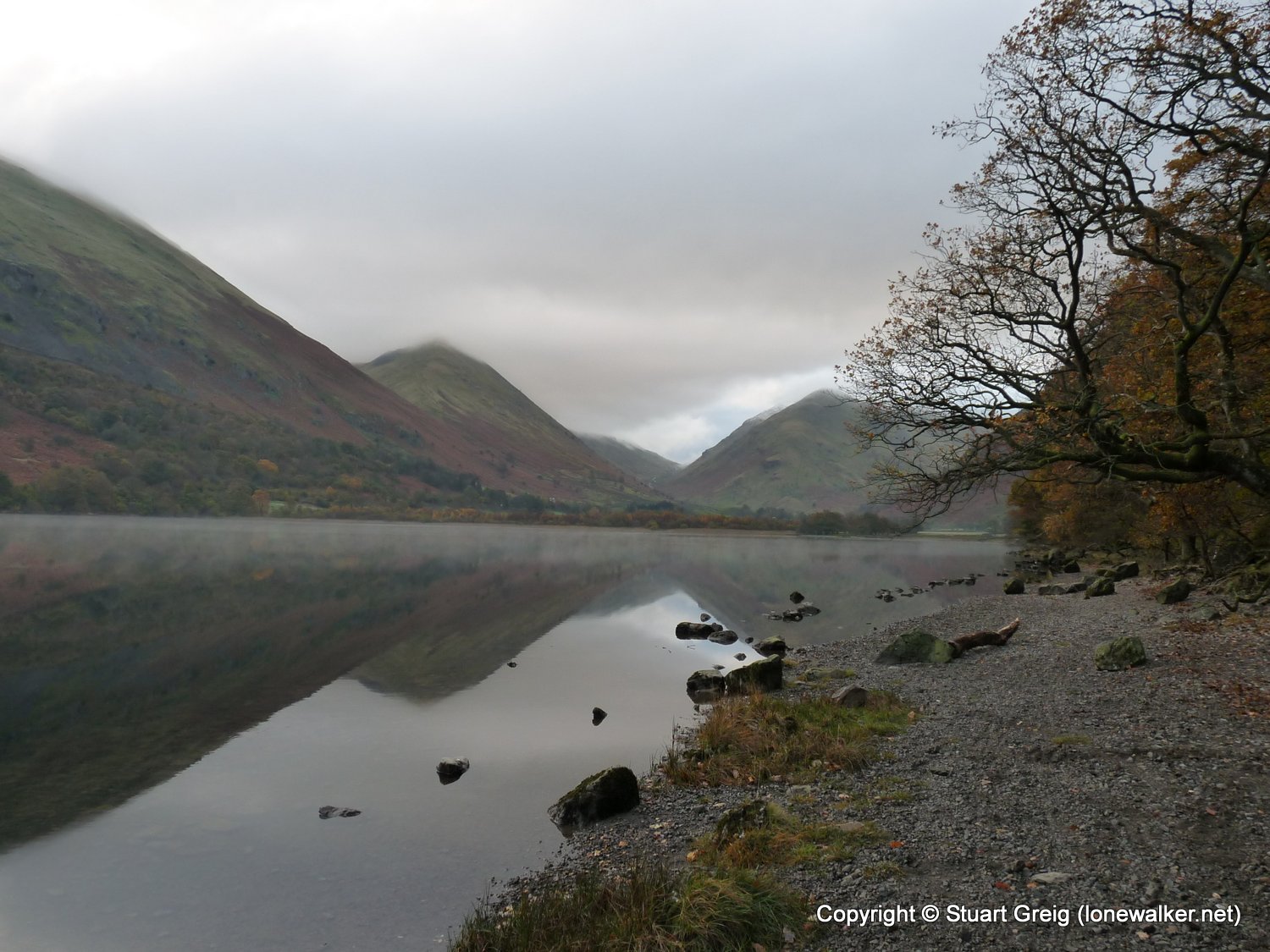 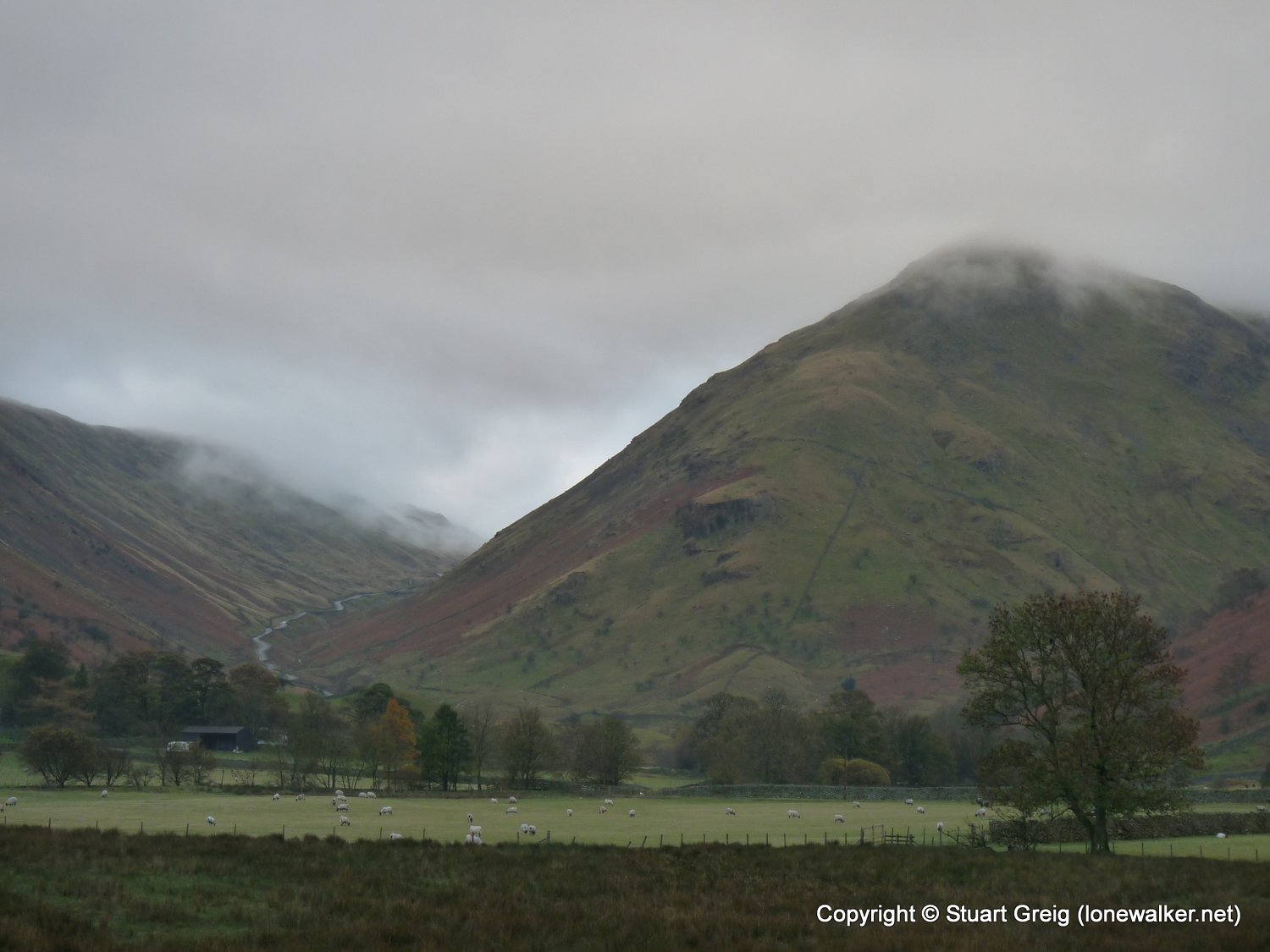 Middle Dodd; my path goes straight up the front

I passed through a quiet farm, Hartsop Hall, with dozens of cows roaming loose between the buildings, they ignored me for a change and I managed to get by without any difficulties. Through the farm and into open fields leading to the foot of Middle Dodd. 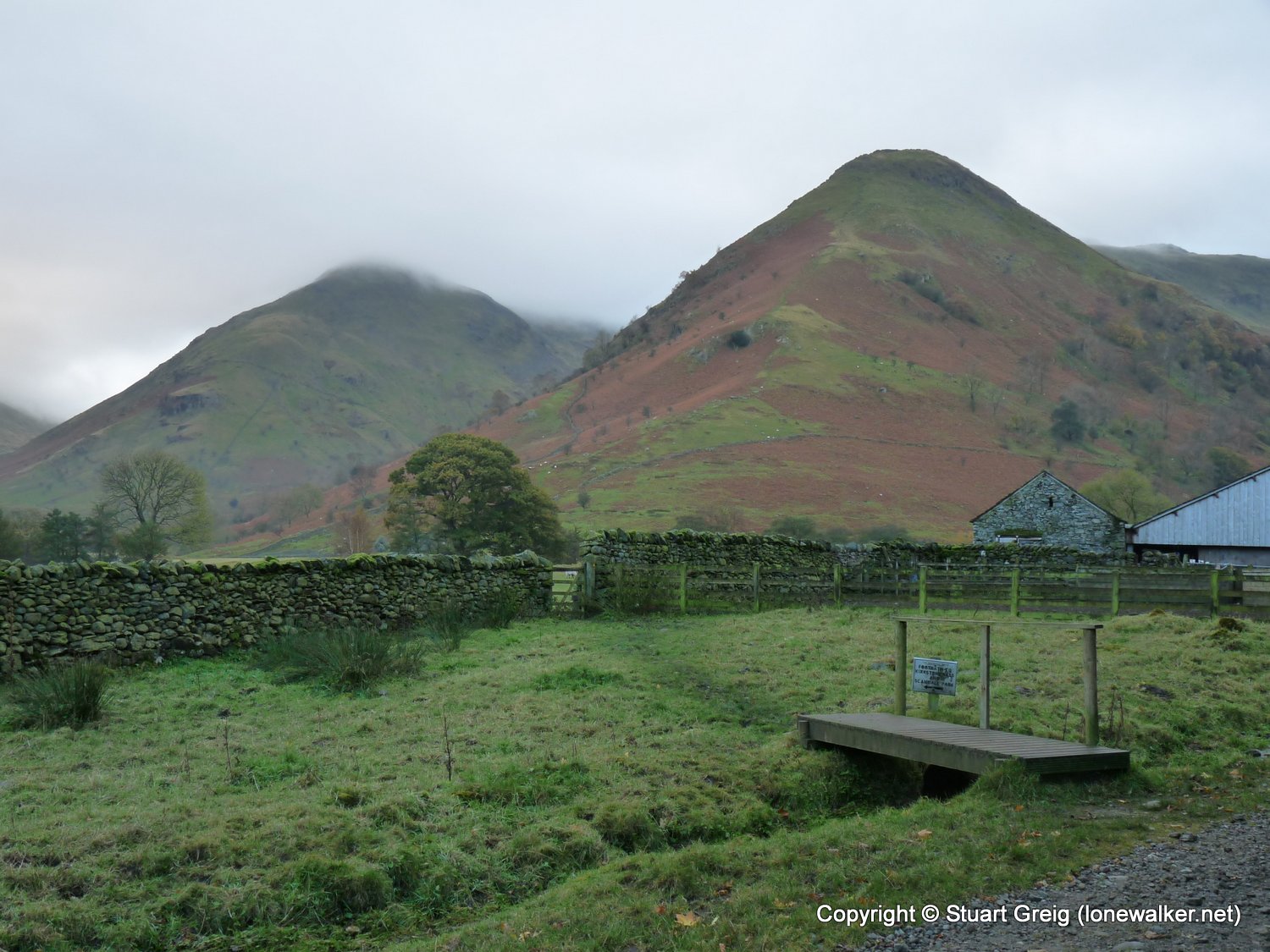 The path through Hartsop Hall

As I reached the other side of Hartsop Hall the views suddenly opened up before me. The trees had gone and the hills were revealed in the true glory. Dovedale looked magnificent. Green fields formed the foreground; a lone tree taking centre stage and then the hills looming in the background, topped with snow and frost and covered in a blanket of cloud. It really was a fantastic view. 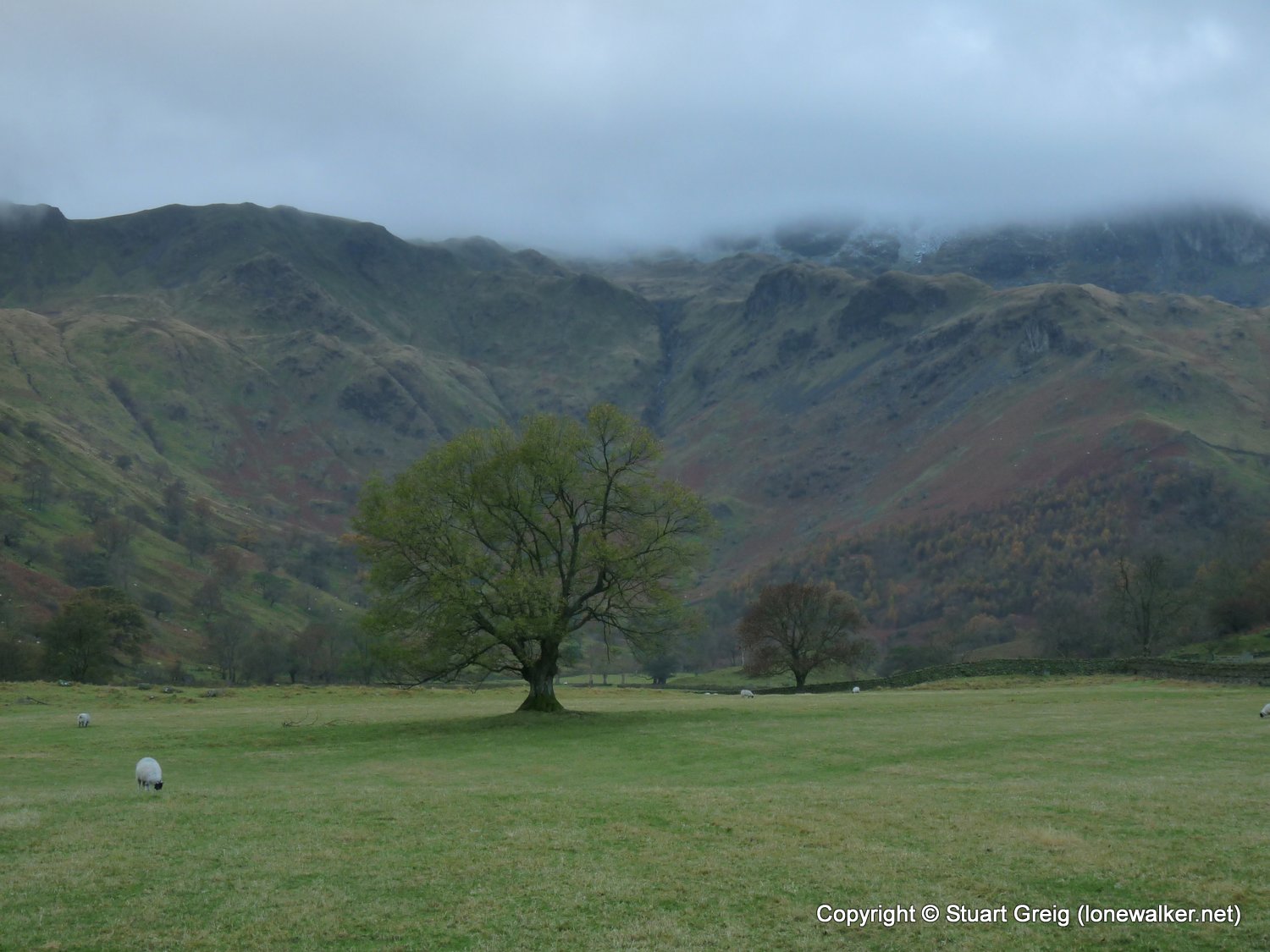 Looking into Dovedale from Hartsop Hall 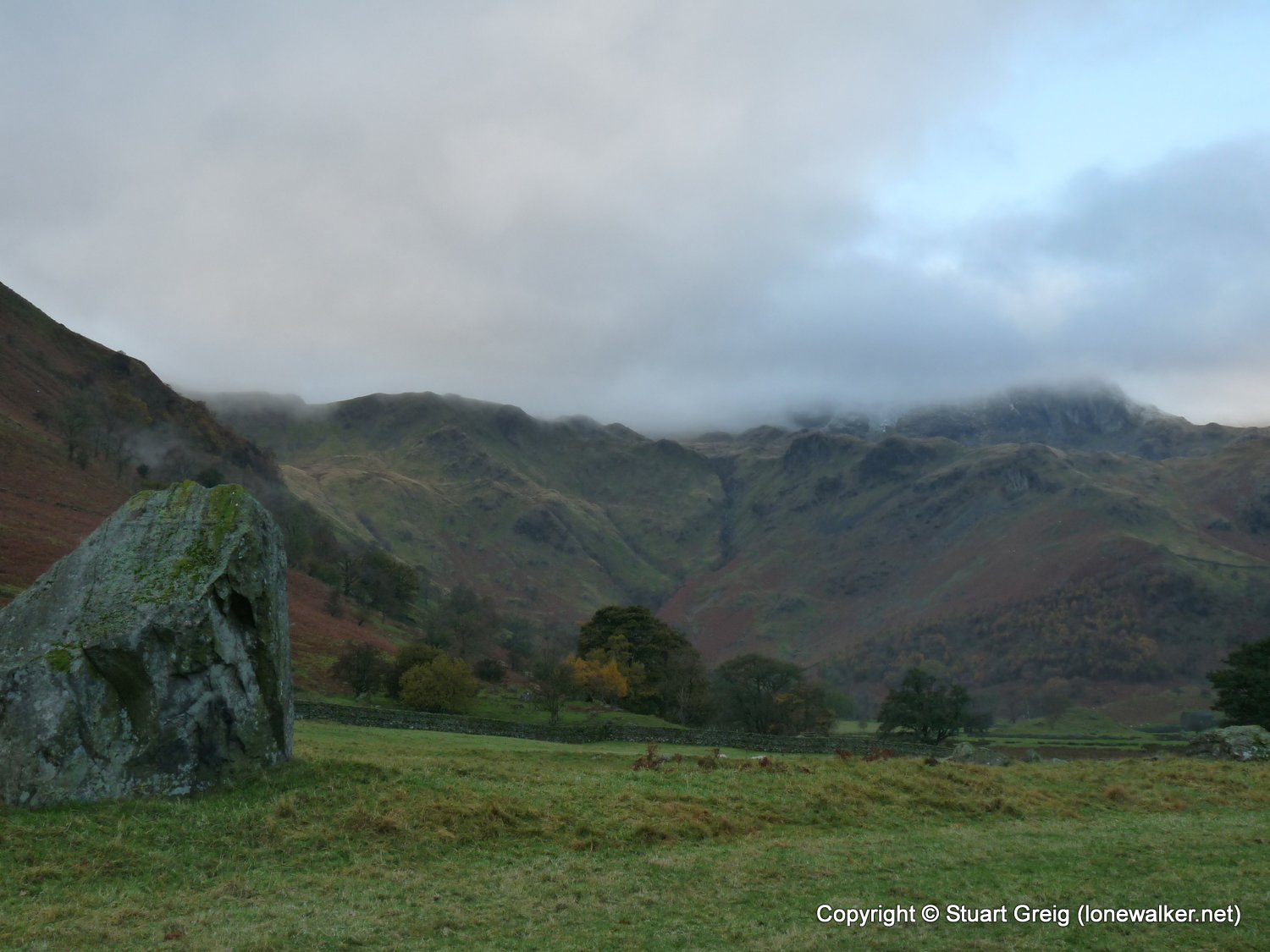 I followed the narrow path that leads from Hartsop Hall, through the pastures, to the foot of Middle Dodd. From here the path continues into Kirkstone Pass, but my route lay up the face of Middle Dodd. No path to follow for me. It was straight up the hill beside the wall. From here it looked very steep, too steep perhaps and I wasn’t looking forward to the next few minutes. 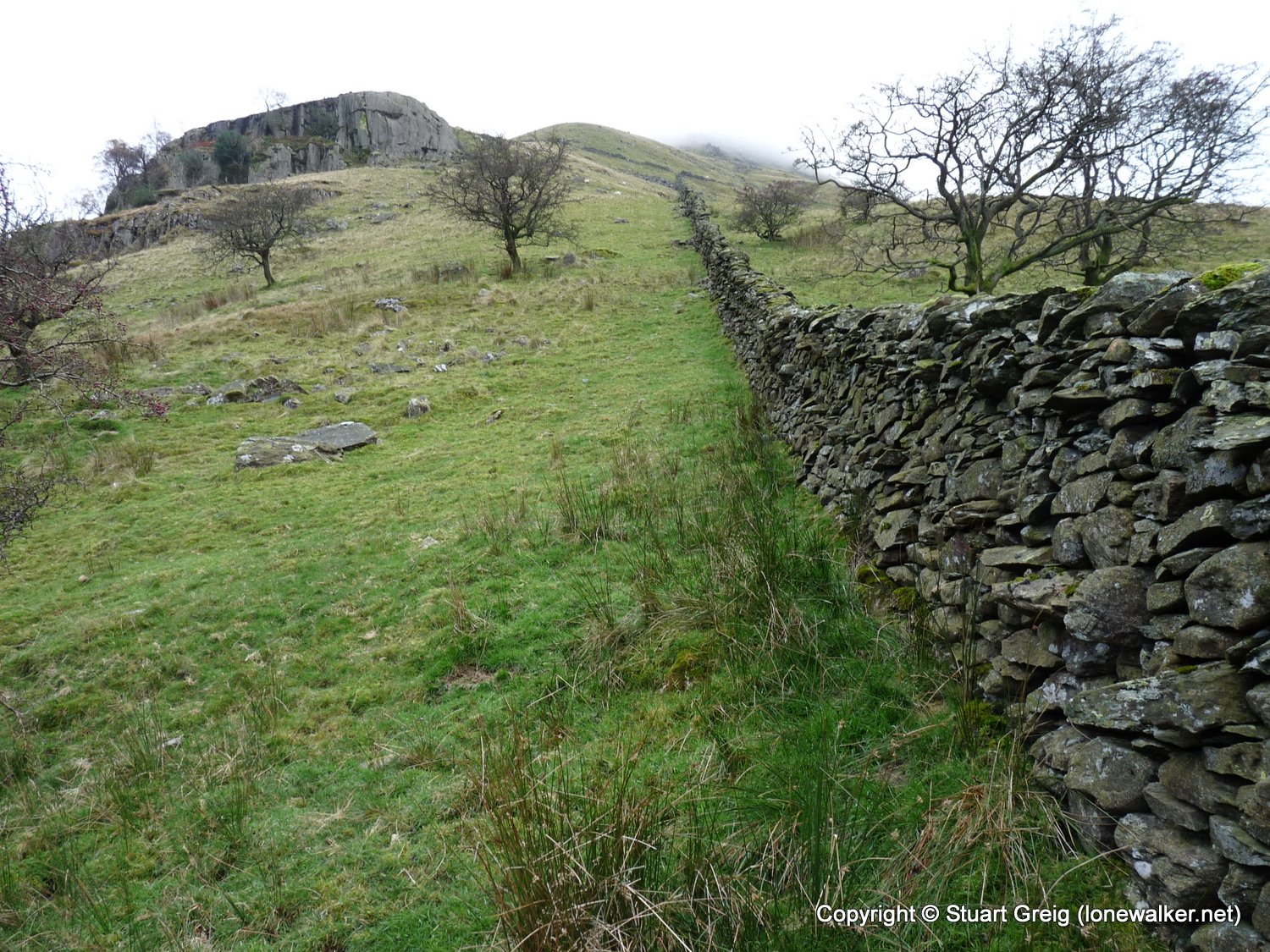 My path, up the face of Middle Dodd 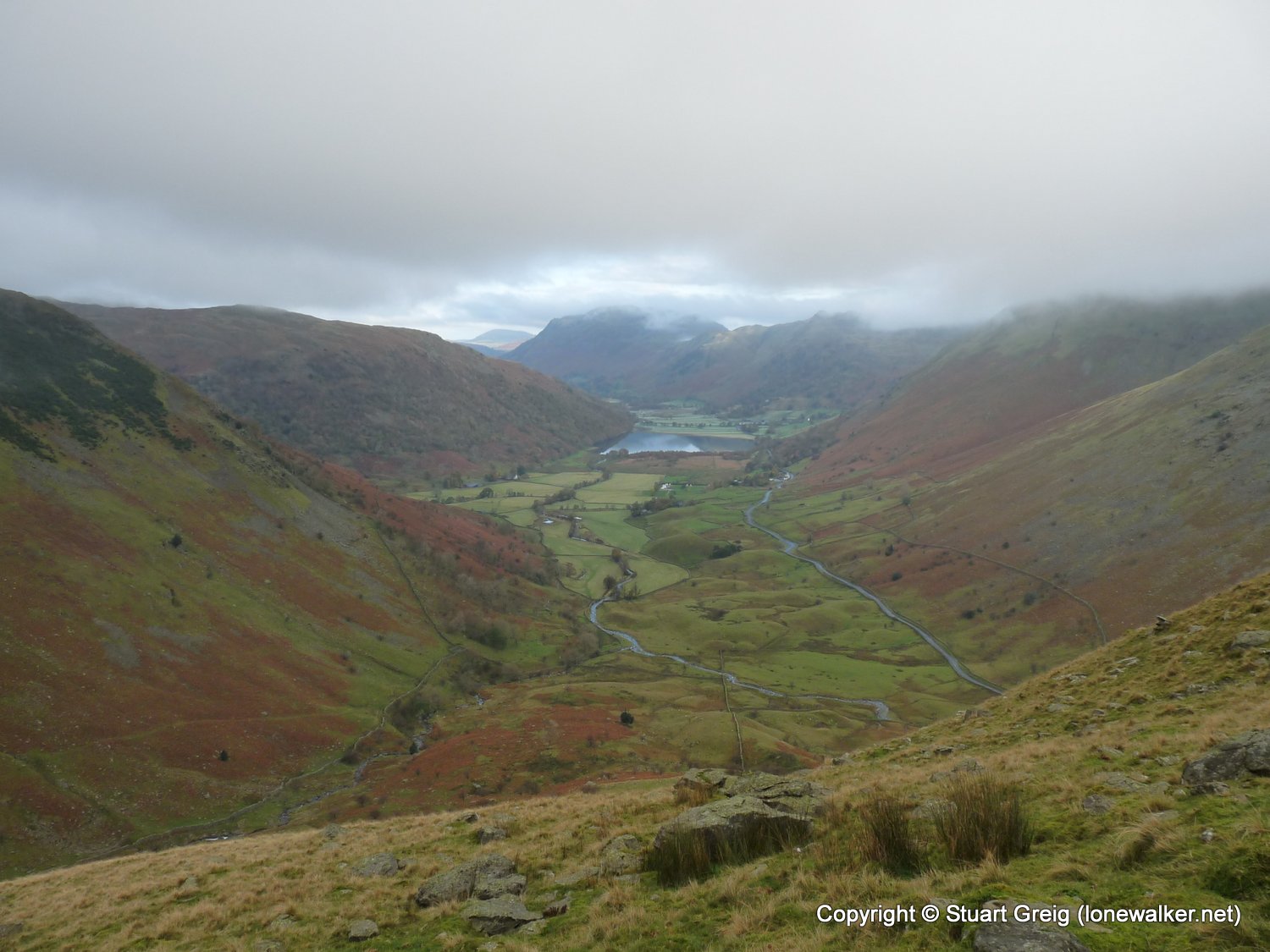 From Middle Dodd, looking back to Brothers Water

The hill was even steeper than it had looked from the bottom. It was perhaps the steepest hill I have climbed without some sort of path to use. The wall was useful as long as it lasted – it gave me something to follow, but it eventually stopped as it met another wall running at 90 degrees to it. I now only had the lay of the land to guide me up the hill. I picked my way as best I could, zig-zagging in places to try and reduce the incline. I took several gasping, wheezing breaks as I climbed and the temperature dropped steadily as I climbed higher. The wind was also blowing much more strongly as the altitude increased.

After a while I reached the frost line. The grass developed a blurred look to it; frost particles settling on the long stems formed beautiful patterns and I stopped many times to try and get a good photograph of it. I had seen this effect at the back end of last year as I walked in the Southern Fells, up Dow Crag but much more pronounced at that time. 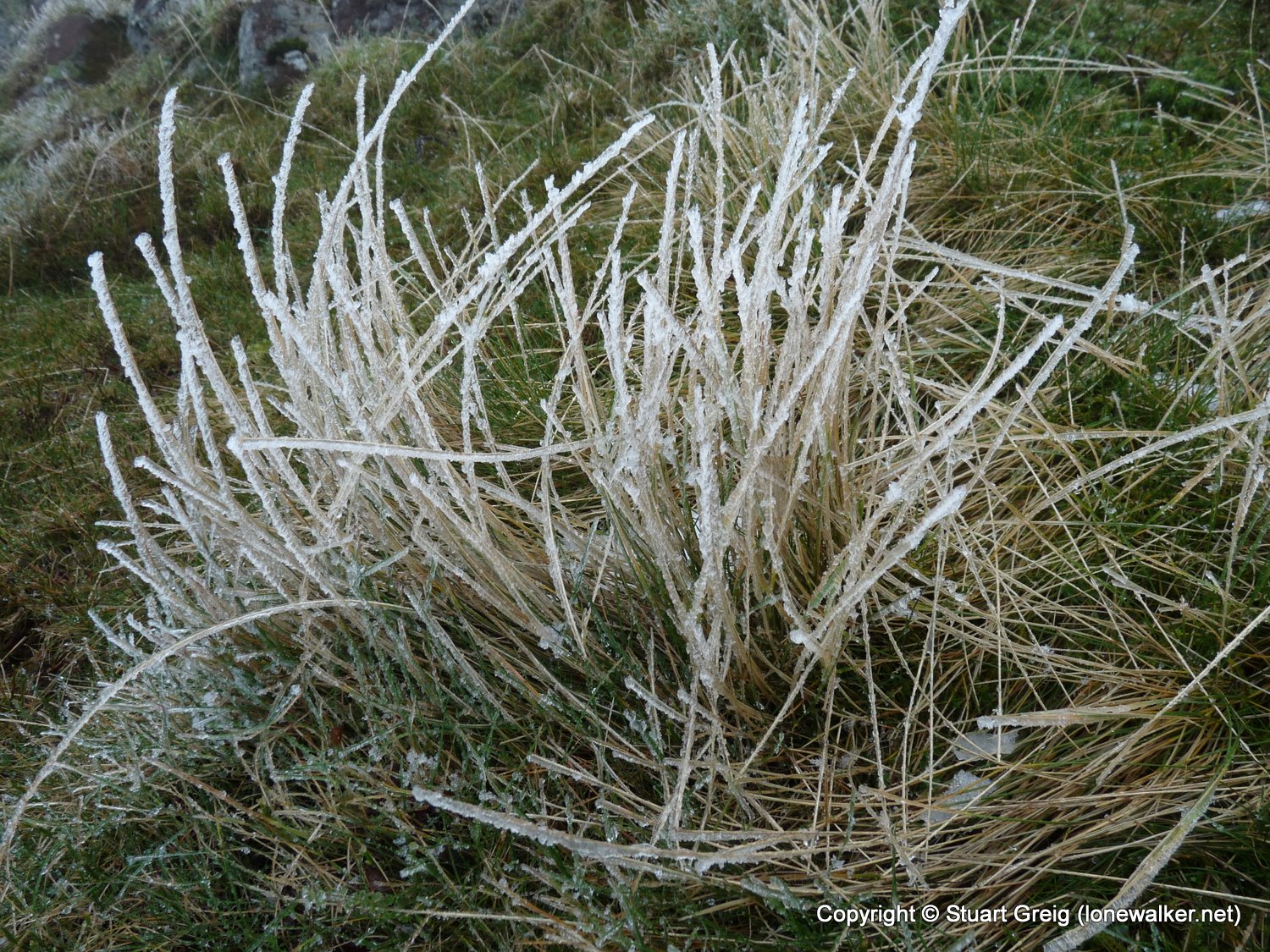 Frosted grasses on the ascent of Middle Dodd

I finally reached the summit of Middle Dodd, well inside the cloud cover, above the snow line and bitterly cold. The frost patterns on the rocks were stunning, I have no idea how many days it took to create these, but the wind and rain must have combined and the results were beautiful. 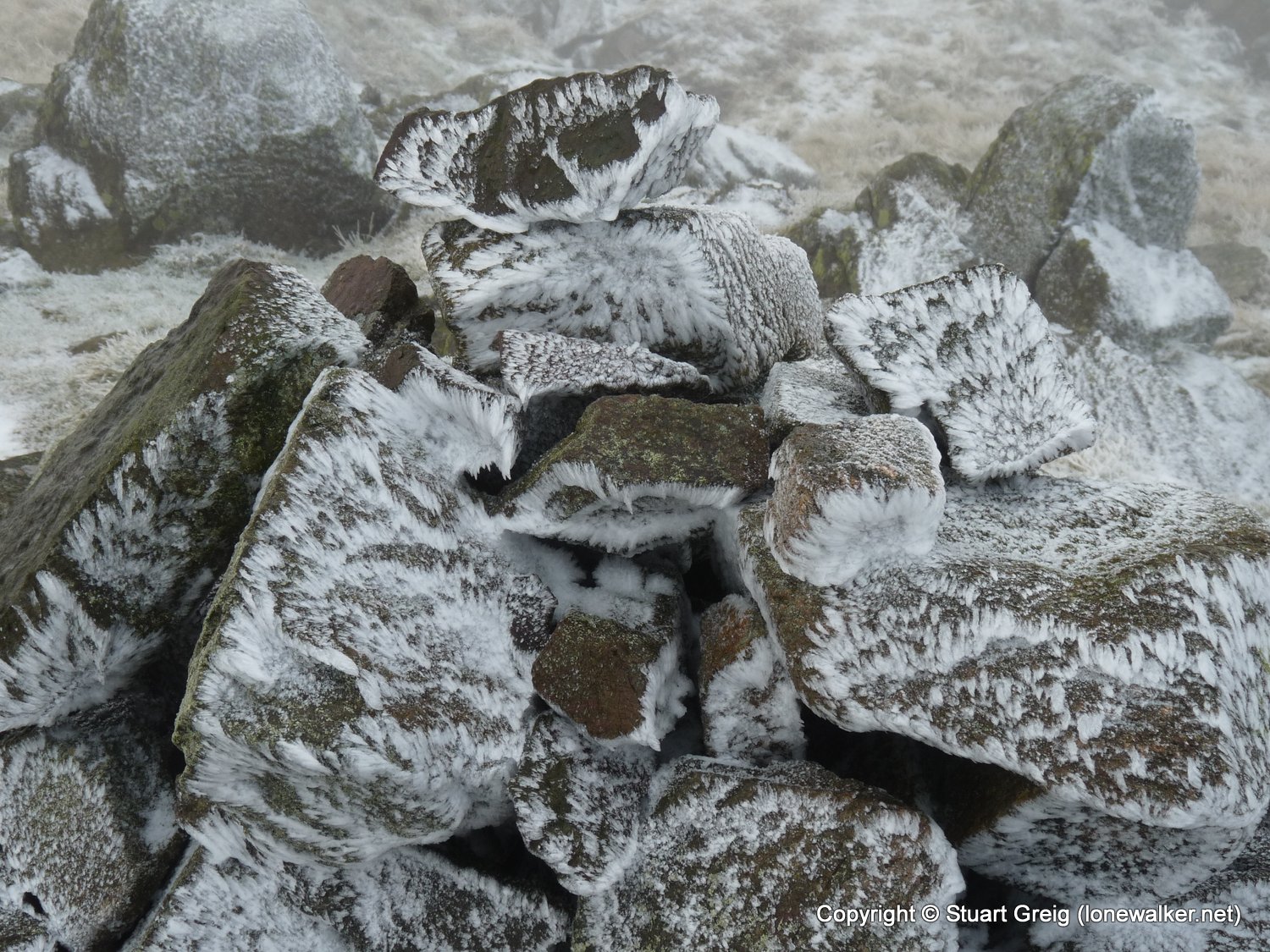 Frost on the summit cairn of Middle Dodd

I left Middle Dodd and walked along the path towards Red Screes. The sun threatened to break through the cloud at one point, but was soon beaten back. The cold was incredible and the wind chill was biting. I was glad of the extra layers I had brought with me and the gloves, although pretty much useless as waterproofs, were lovely and warm. 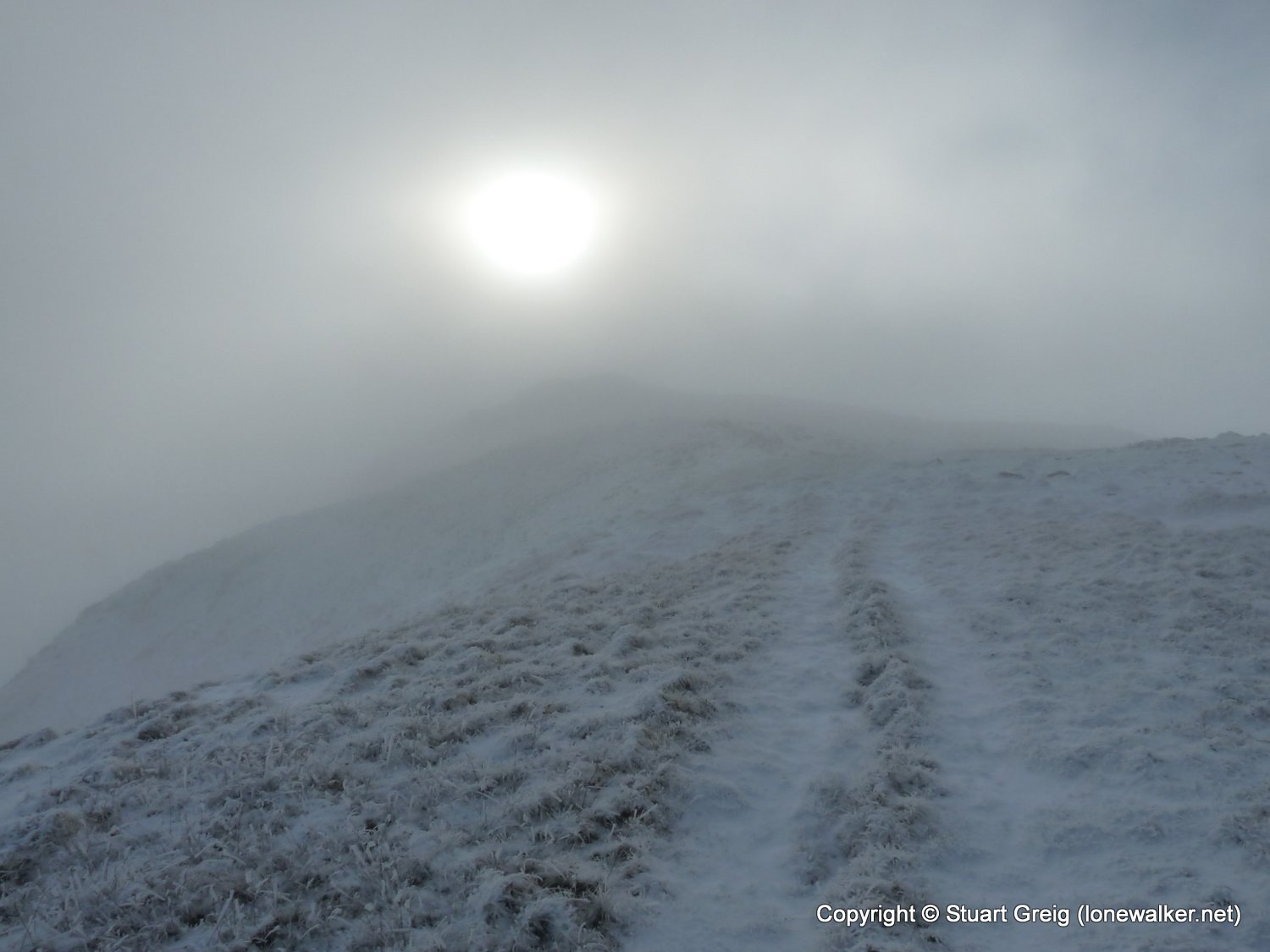 Sun trying to break through on the approach to Red Screes 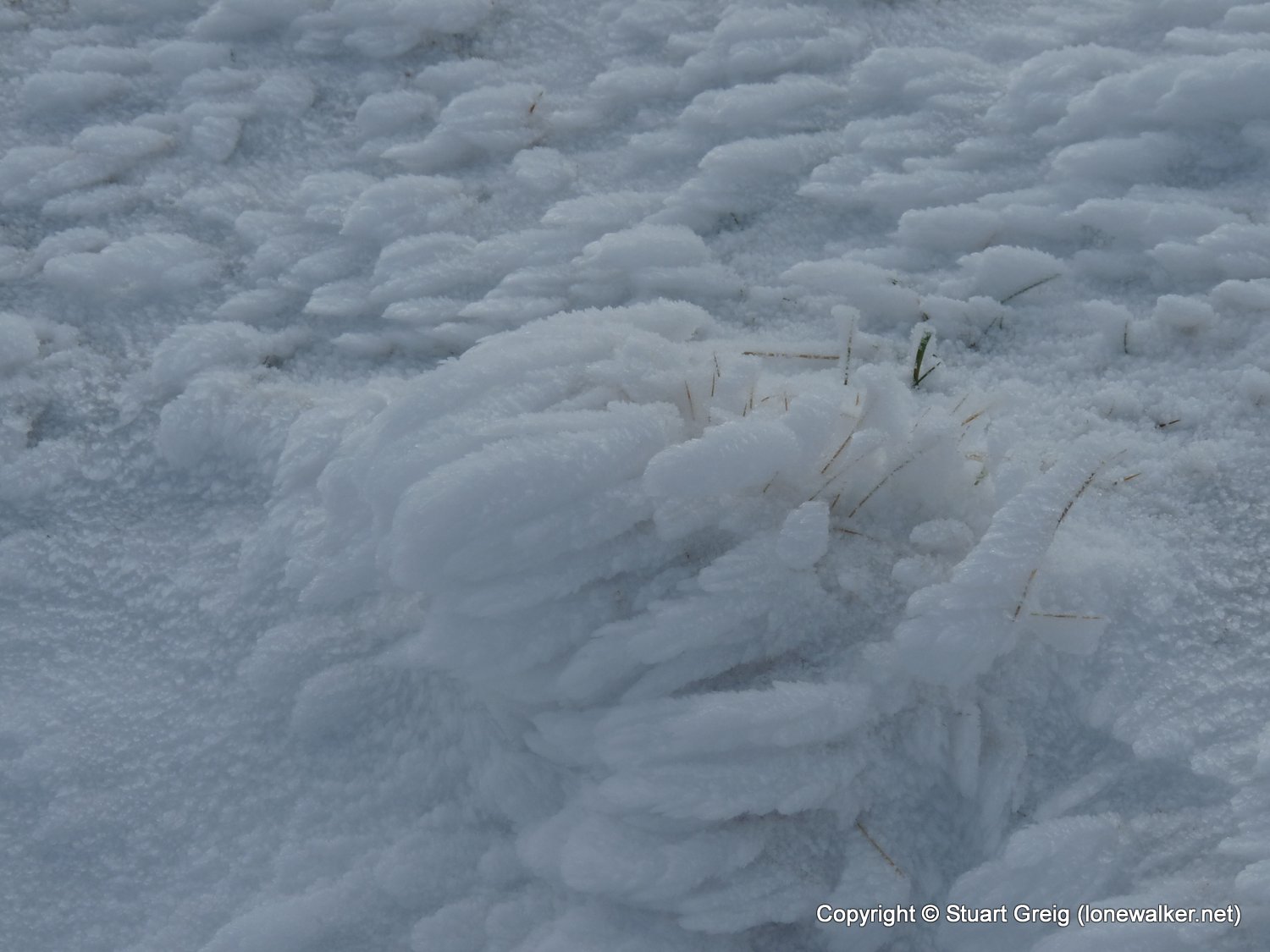 Snow and frost patterns formed around the grasses on Red Screes

The summit of Red Screes was fantastic. The snow and frost was everywhere, on all the rocks, the shelter and the trig point. Turning every stone surface into a work of art. The wind was savage and the cold was blistering. I took my gloves off for a few minutes to take some pictures of the trig point and the summit cairn and within only those few minutes the tips turned numb. Even once I’d got them back into my gloves it took 20-30 minutes before the feeling returned to them.

I didn’t spend much time on the summit. I was completely alone, which was somewhat surprising considering the time of day (it was almost 10:00) and the close proximity of the Kirkstone Inn, a popular starting point for walkers to these hills. I set out along an obvious path from the summit. I passed the tarns that are situated on the summit and realised they were in the wrong place. They were on my right and they should be on my left. I had taken the wrong path from the summit. Easy to do with the cloud down. 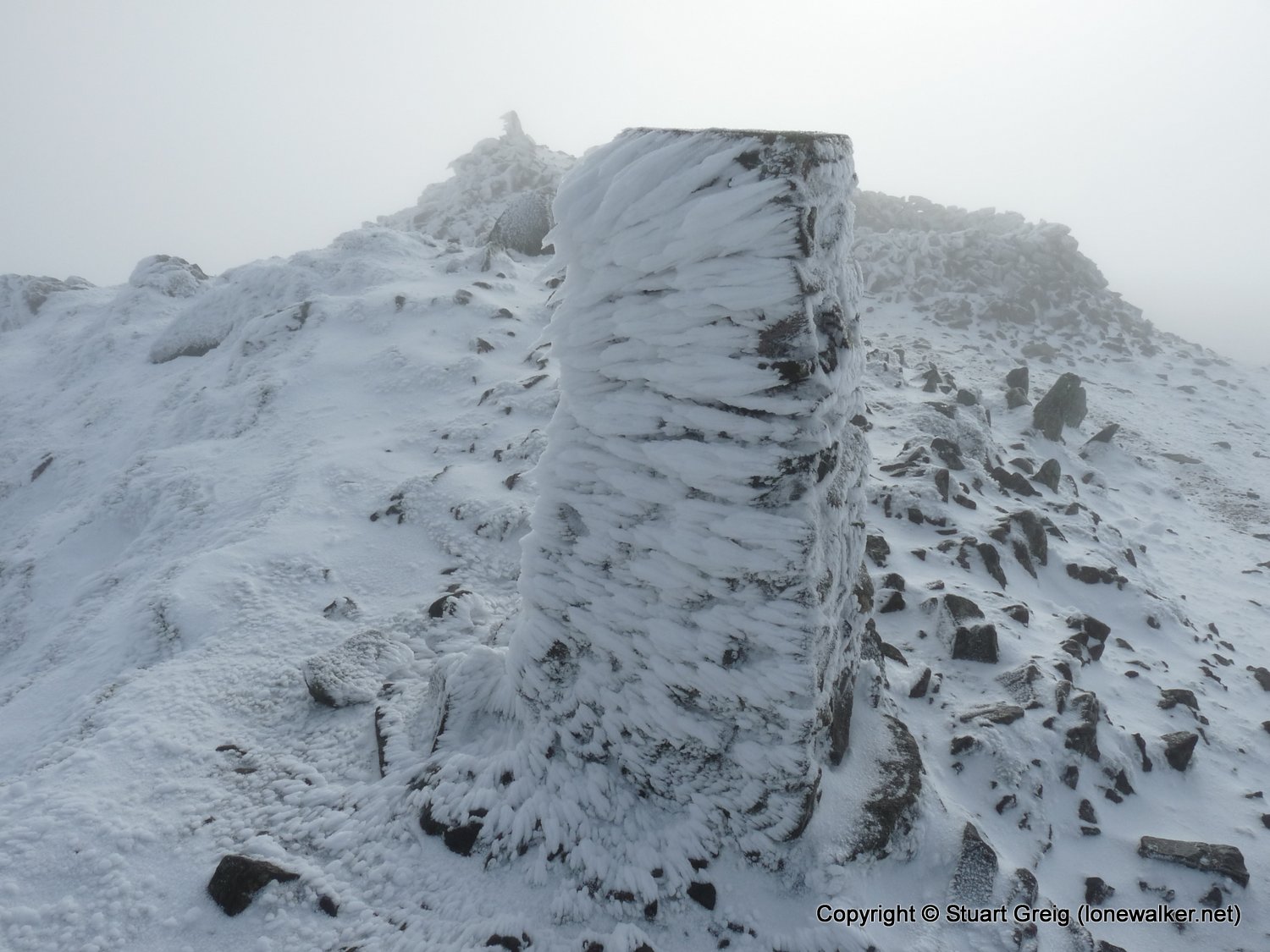 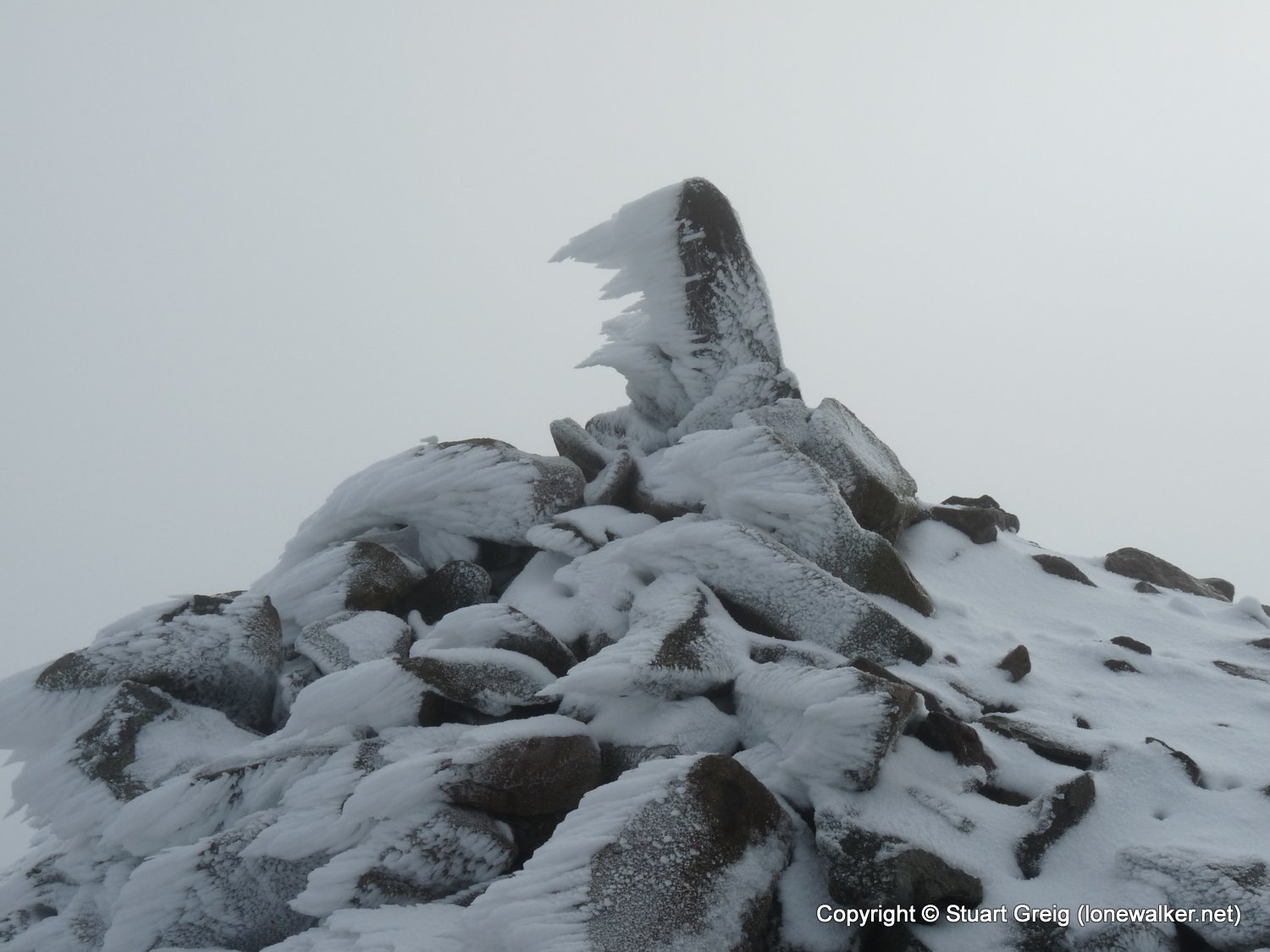 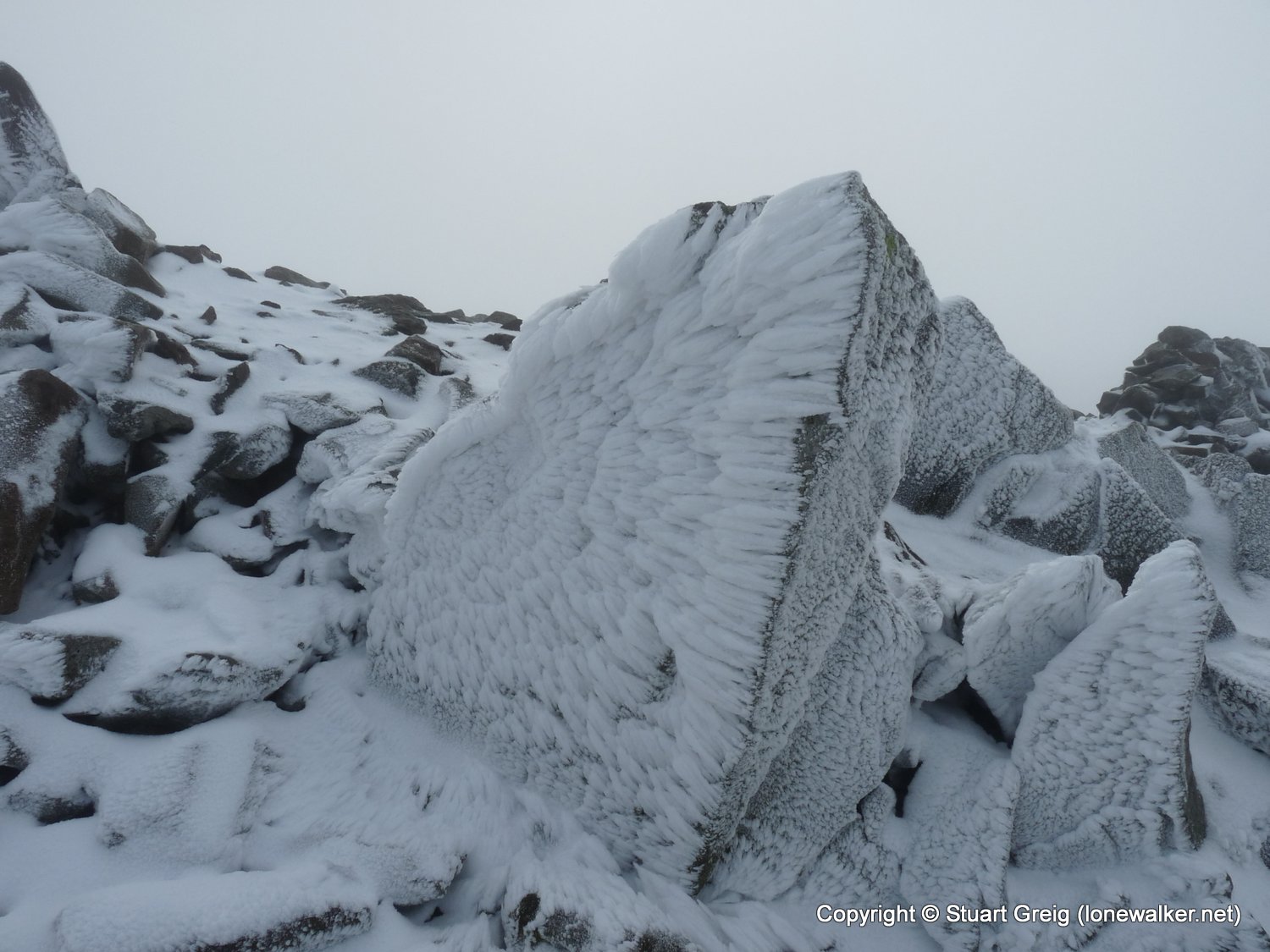 Frost patterns on the rocks on Red Screes 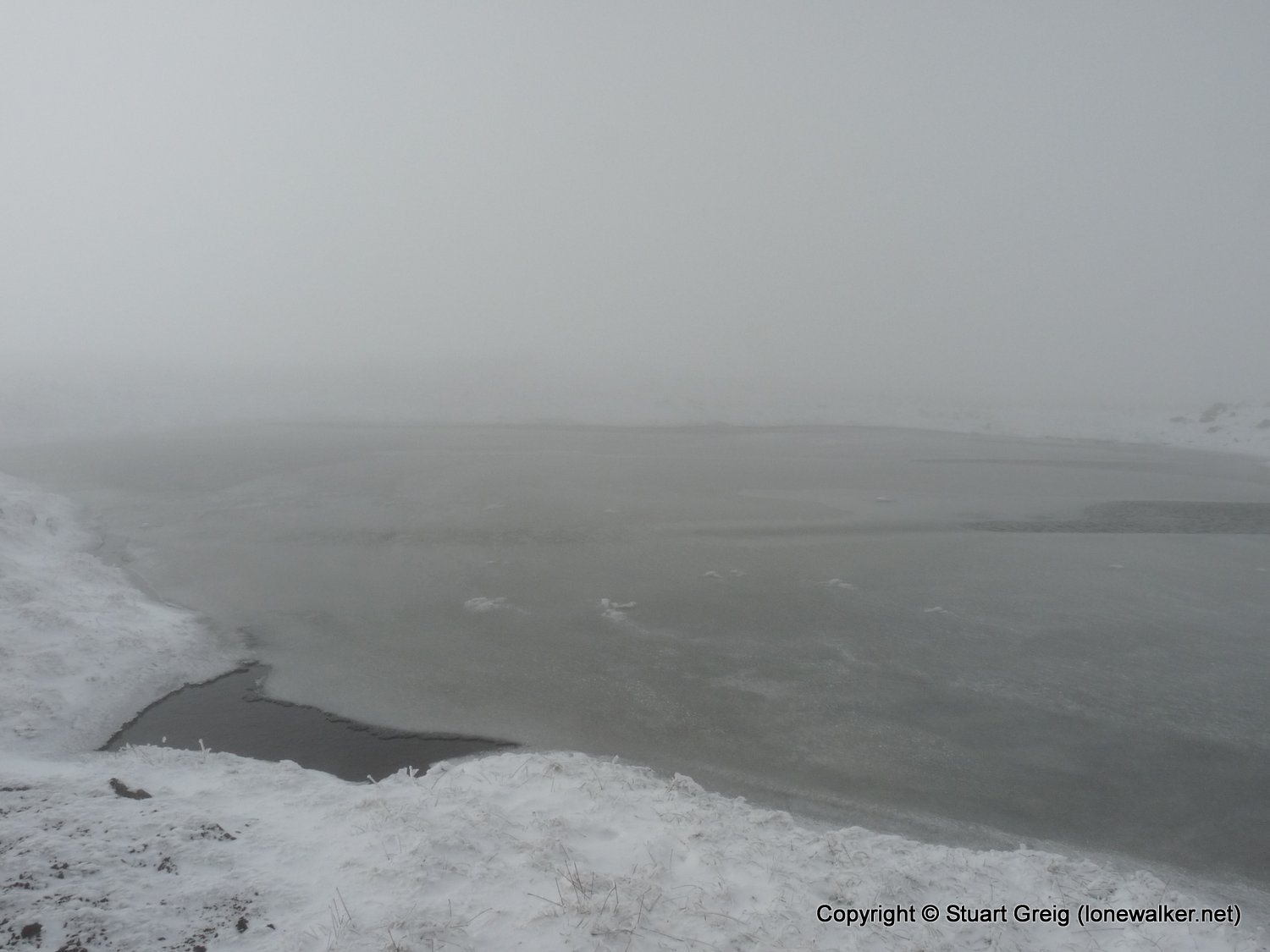 Frozen tarn on the summit of Red Screes

I knew which direction I needed to head in order to get back on the right track, but I pulled the GPS out, just to be on the safe side and headed across the pathless tussocky moorland towards what should have been a faint track leading to Scandale Pass. My sense of direction kept forcing me left, but the GPS kept telling me right and I fought the urge to ignore it for quite a while. It felt really strange. There was next to no visibility, the cloud was well down, the wind was whistling around my ears and the cold was biting. I kept following the GPS, despite feeling I was heading in the wrong direction. In the end I got quite depressed about this – it must only have been a few minutes – but it was disorientating and in the end I gave up following the GPS and cut across to the wall that would in the end lead me to the head of Scandale Pass. With hindsight it would have been easier to follow this in the first place, but the lure of a green dashed Right of Way on the map led me to think there was probably a path there, when the truth of the matter was, the path was beside the wall all along. 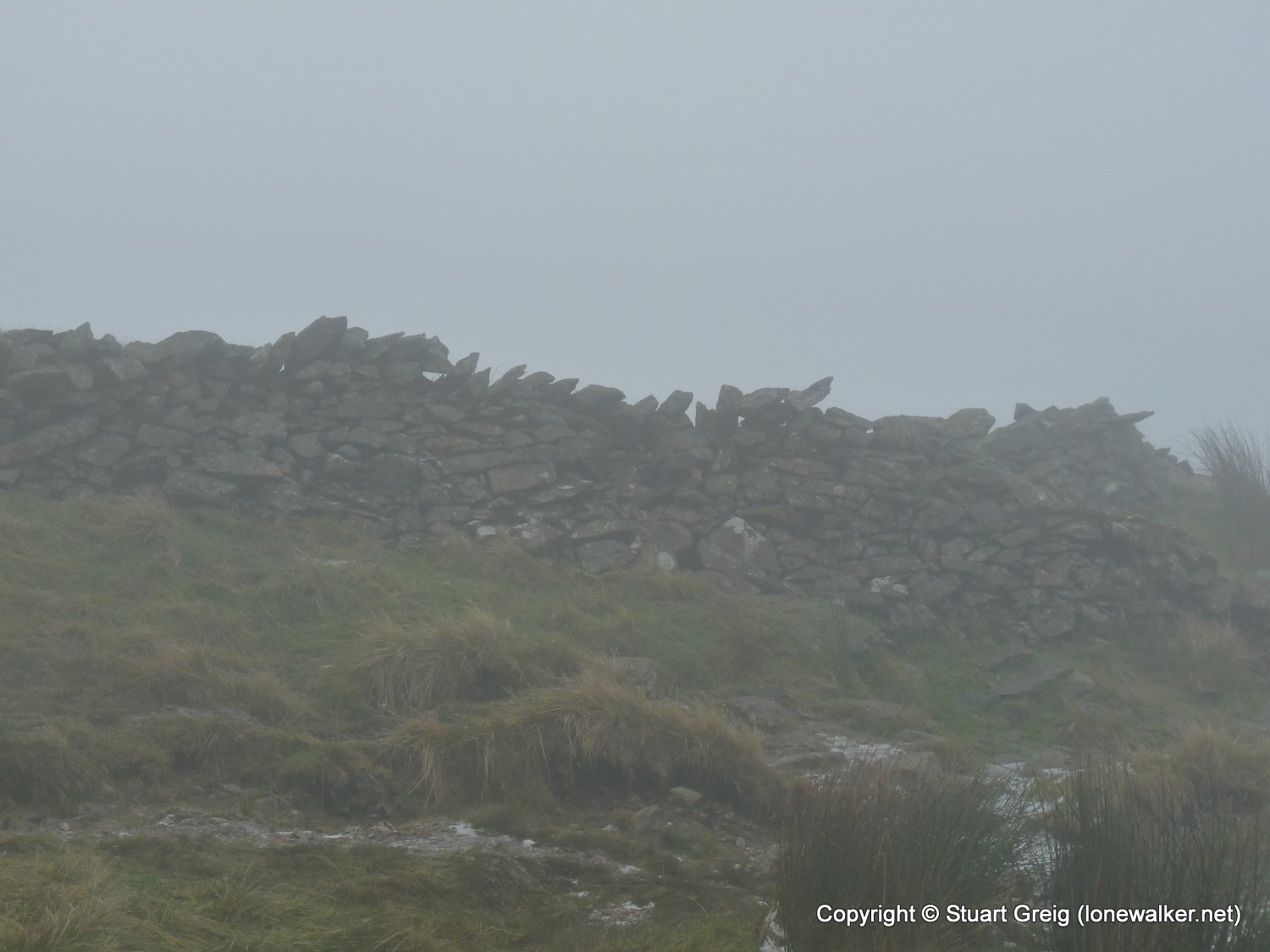 The wall that will take me to Scandale Pass 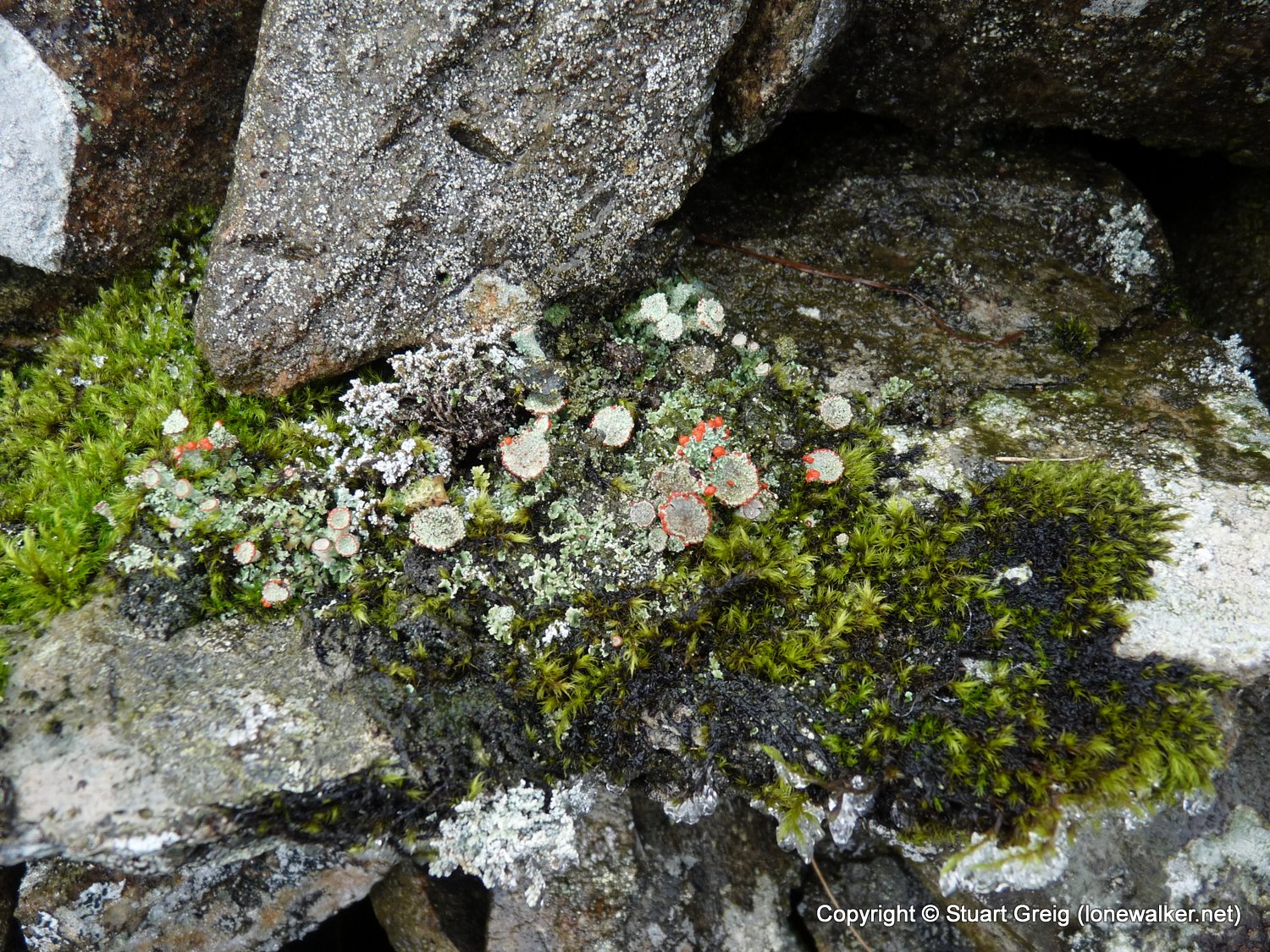 Sure enough, following the wall for a while brought me to the head of Scandale Pass, where I got tantalising glimpses of clear fells ahead – only for the cloud to drift across again and blot out the view. My motivation was beginning to flag now. I had been expecting a clear day with views and vistas and instead I was walking in cloud. I decided to pull the plug and take the first viable route down, back to the car. 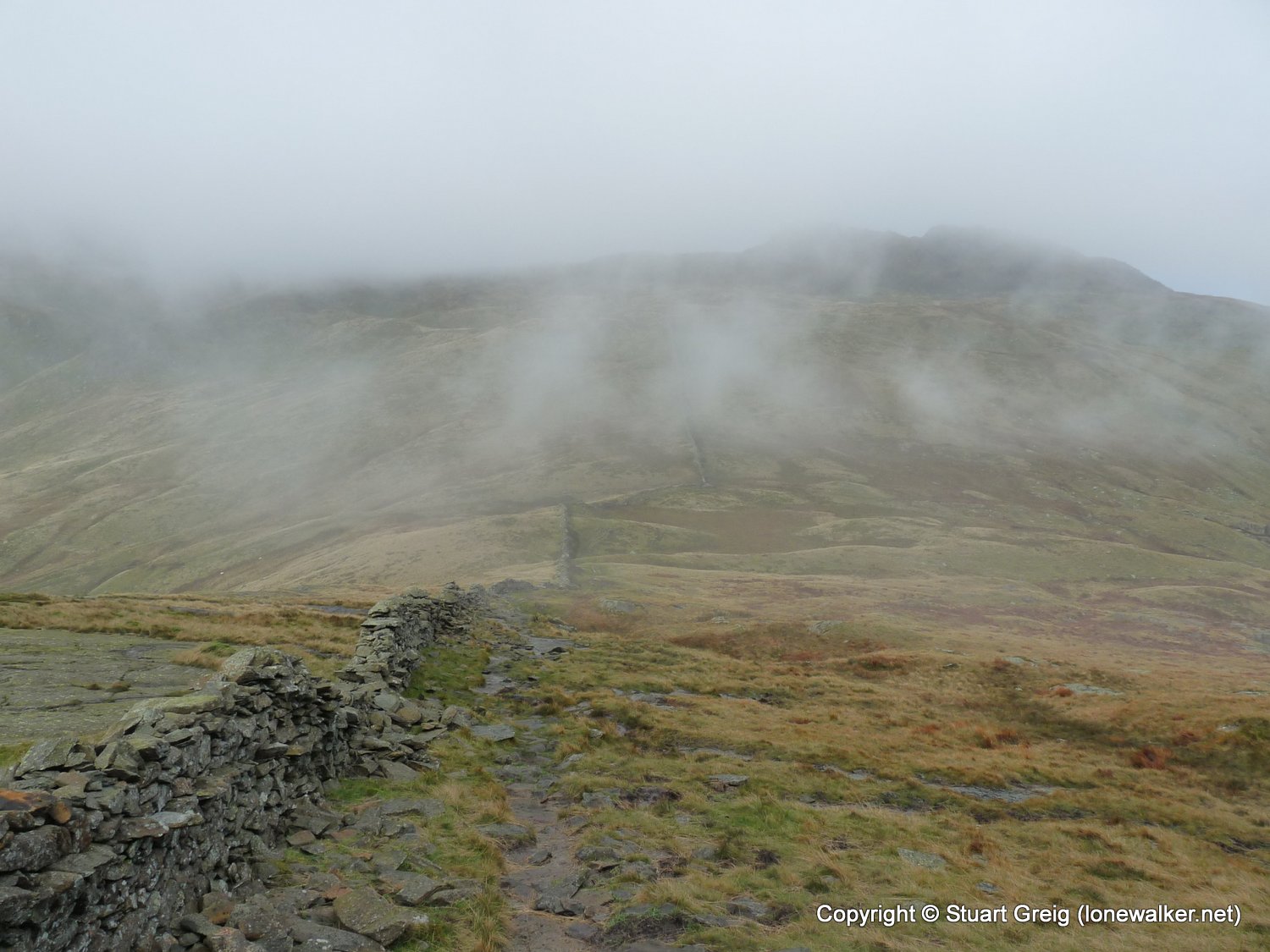 Looking down onto Scandale Pass 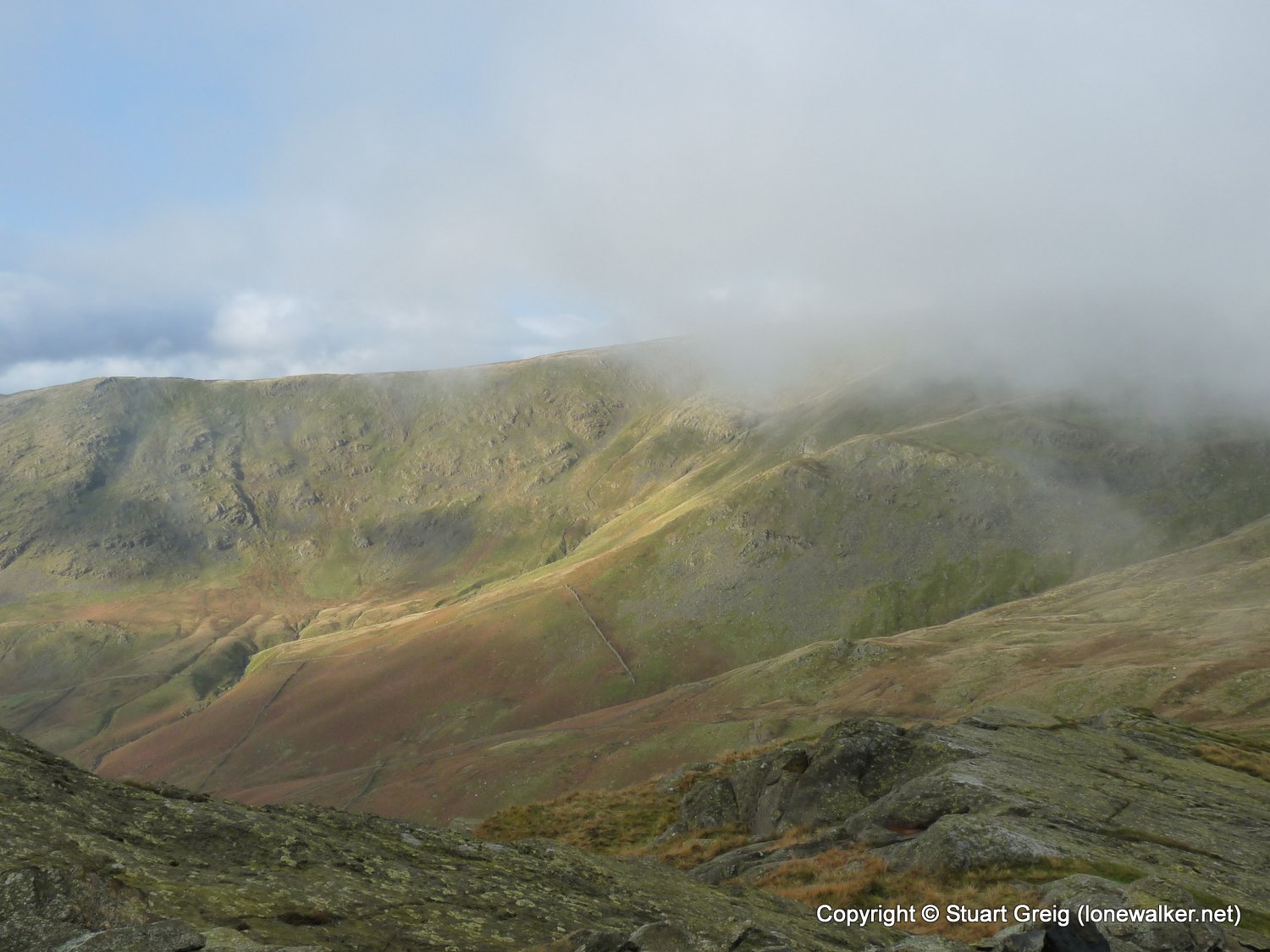 Scandale Pass drops west into Scandale and east into Caiston Glen. East would take me back to the car, down a glen I could see was clear of cloud and not too steep. I had no regrets as I left the ridge line and headed down out of the cloud and into the warmer environs of the valley. I met the first walkers of the day coming up the path towards me and before long I met the path I had walked in on. 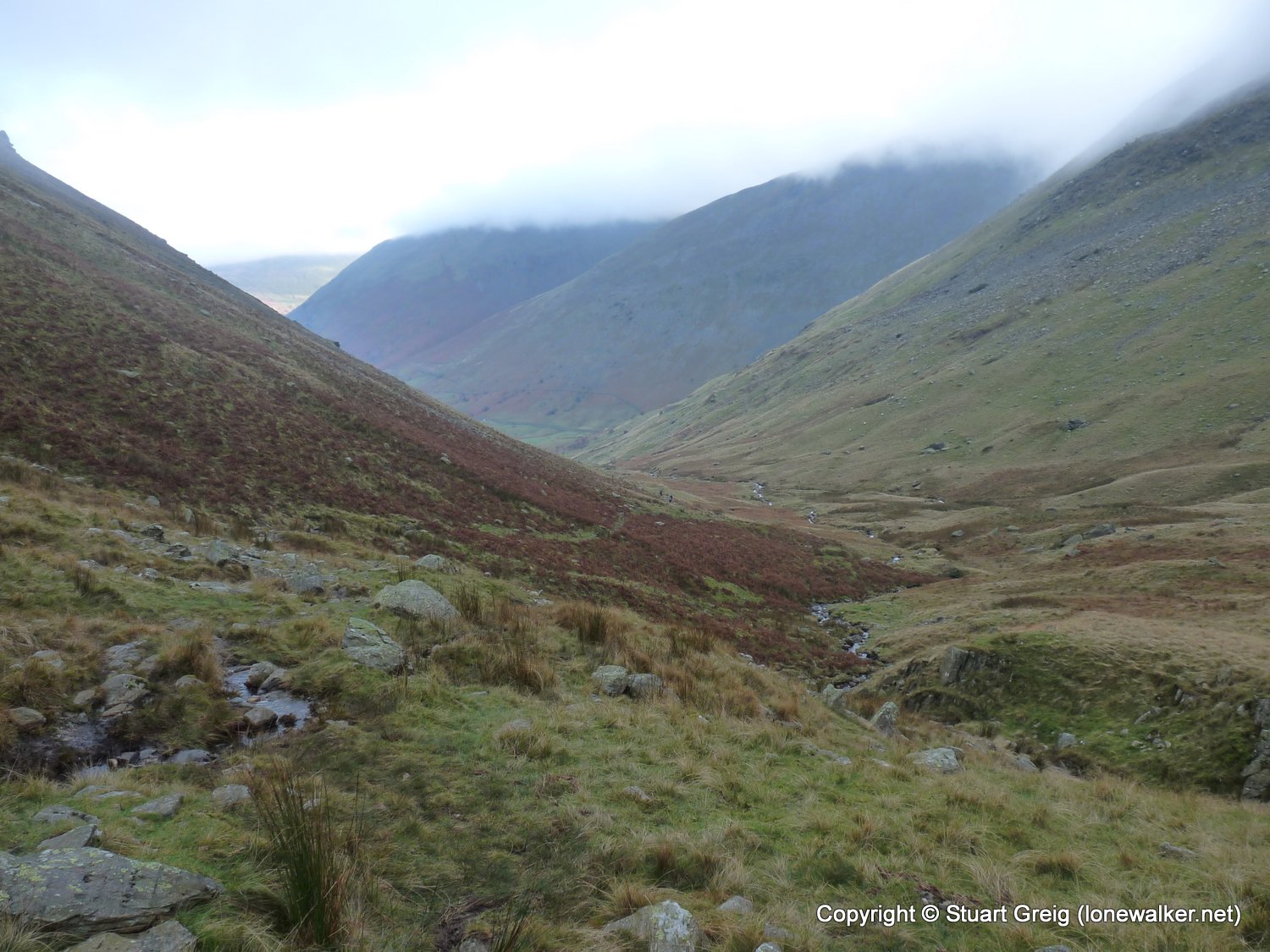 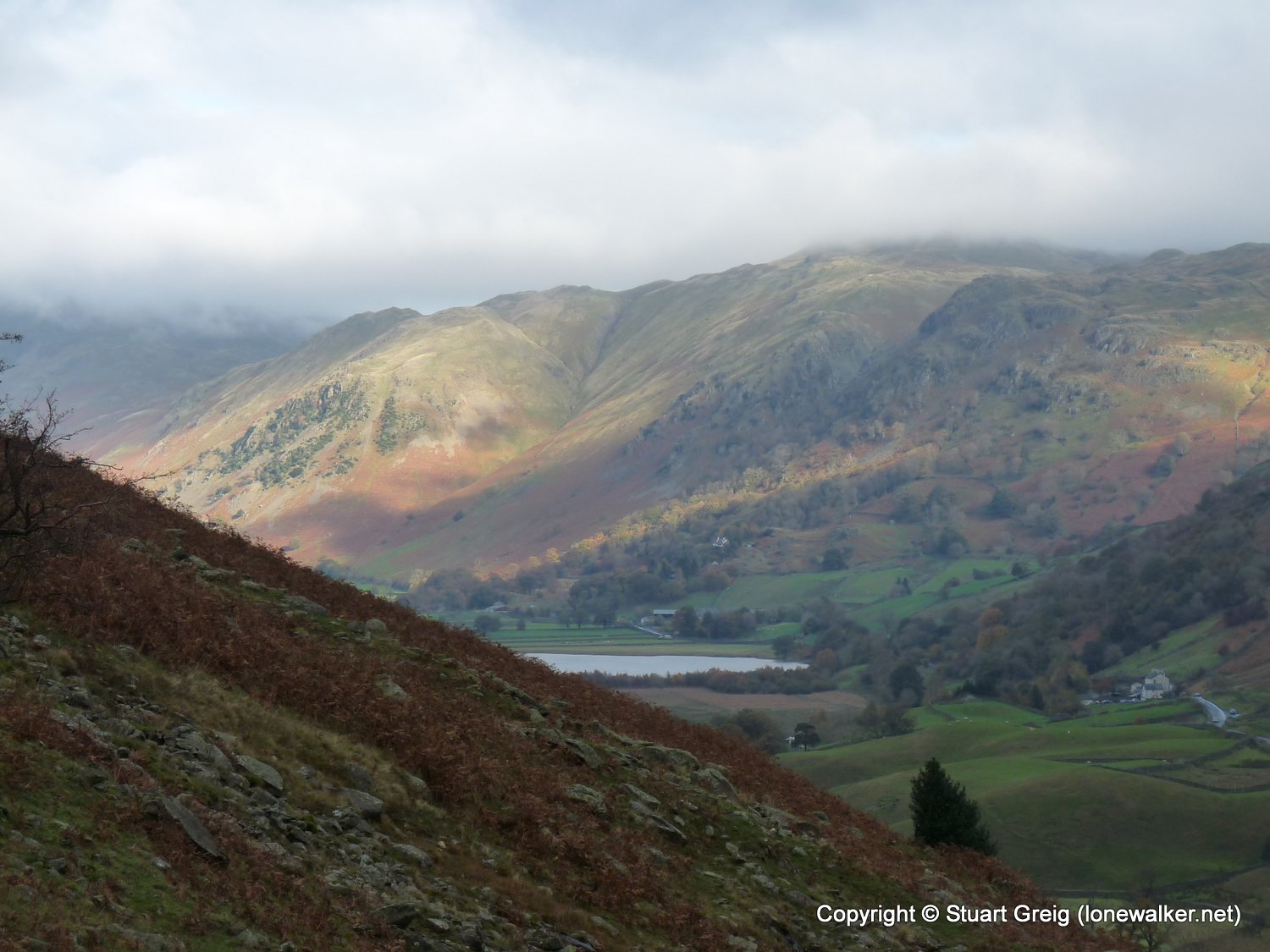 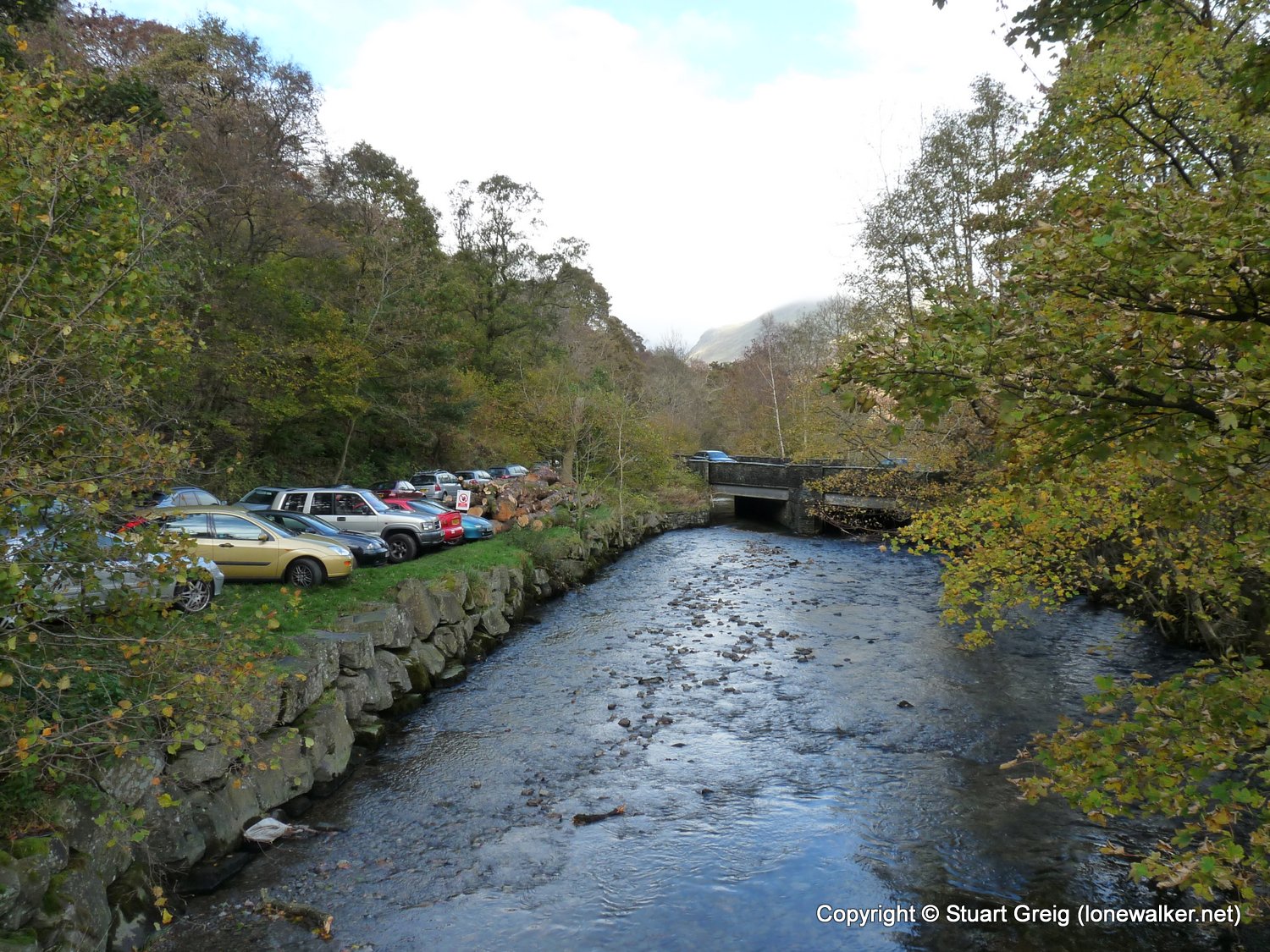 Once down in the valley I began to meet herds of walkers, some with buggies and small children out for a winters walk. The car park at Cow Bridge, when I returned was full to bursting with cars parked on both sides of the bridge. There were many people enjoying the walk beside Brothers Water and the day was beginning to turn out quite reasonable, at this low altitude at least.

Never mind, at least I’d not turned over in bed when I could have!