With the smell of burning clutch still lingering around the parked car, I set out from the car park opposite Wha House at 06:30. The drive in had been exciting and wonderful. There’s very little moving in the Lake District at 06:00 on a Sunday morning and many of the valleys I passed through were full of low lying mist, giving me splendid views as I climbed out the other side and above the mist. The passes of Wrynose and Hardknott are a pleasure to drive through when there’s no caravans and Sunday drivers to slow you down, hence the smell of burning clutch and the gentle ticking of the brake discs as they cooled in the morning mist.

This was my first Sunday day walk in a long time and I’d only really decided to do this walk at the last minute. The weather forecast was brilliant, the wife was at work all day and I had nothing else to do, so I left the house at 04:30, in the dark and headed for the last of the UK’s big three; Snowdon and Ben Nevis already in the bag.

I’d elected to walk in through Eskdale, a truly beautiful valley surrounded by high hills and splendid views, but chosen the route recommended by Wainwright, the one that avoids Lingcove Bridge and Throstlehow Crag. According to AW this route has too many distractions and the walker will end up running out of time, as well as leaving you with a potentially boggy crossing of Great Moss before you begin the main climb of the day. Having already walked that route into Eskdale previously, I had no problem with the route via Scale Bridge and over Brock Crag and it has the benefit of being pretty much dry underfoot all the way.

My original plan had been to climb Scafell Pike from Little Narrowcove then ascend Scafell via Lord’s Rake, returning to the car via Slight Side and if this had actually happened I wouldn’t have ended up with a walk that looks like a child’s balloon on the end of a long string. As it was I ran out of time and more importantly energy for the final climb from Broad Stand to Scafell and I returned, defeated, directly to the car, back along the route I’d walked in on. 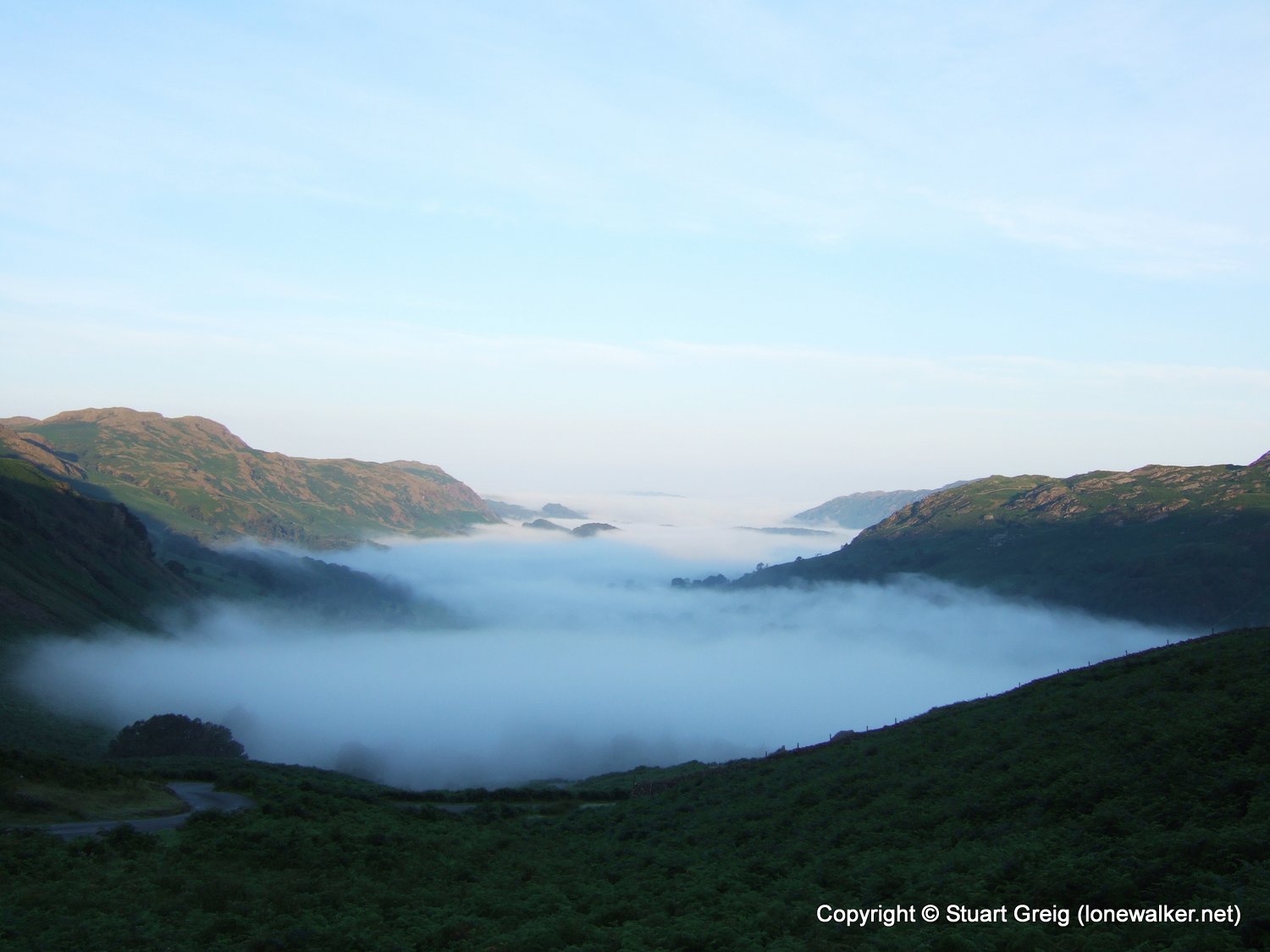 Mist in Eskdale, from the car on the drive in 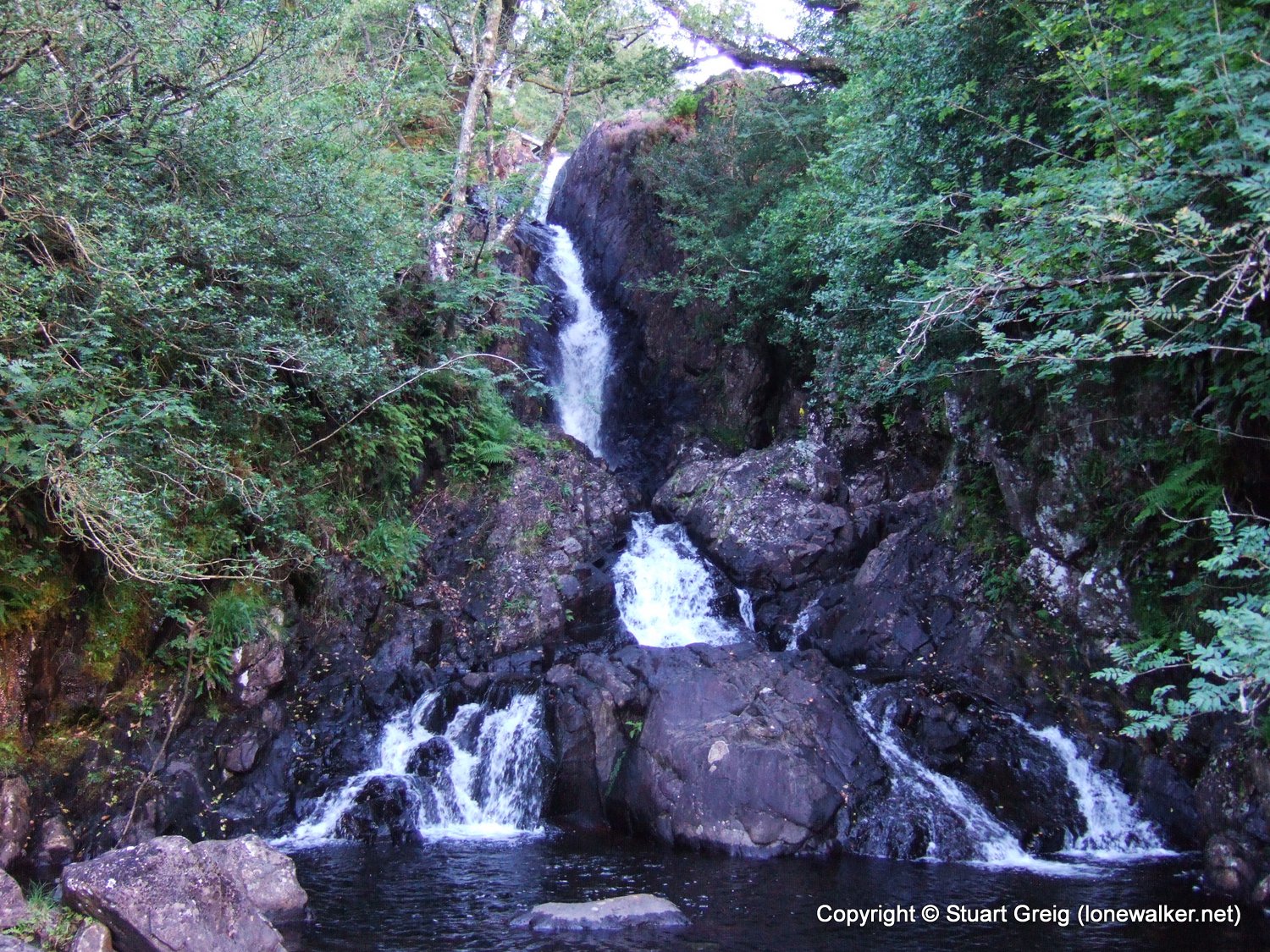 The falls at Scale Bridge 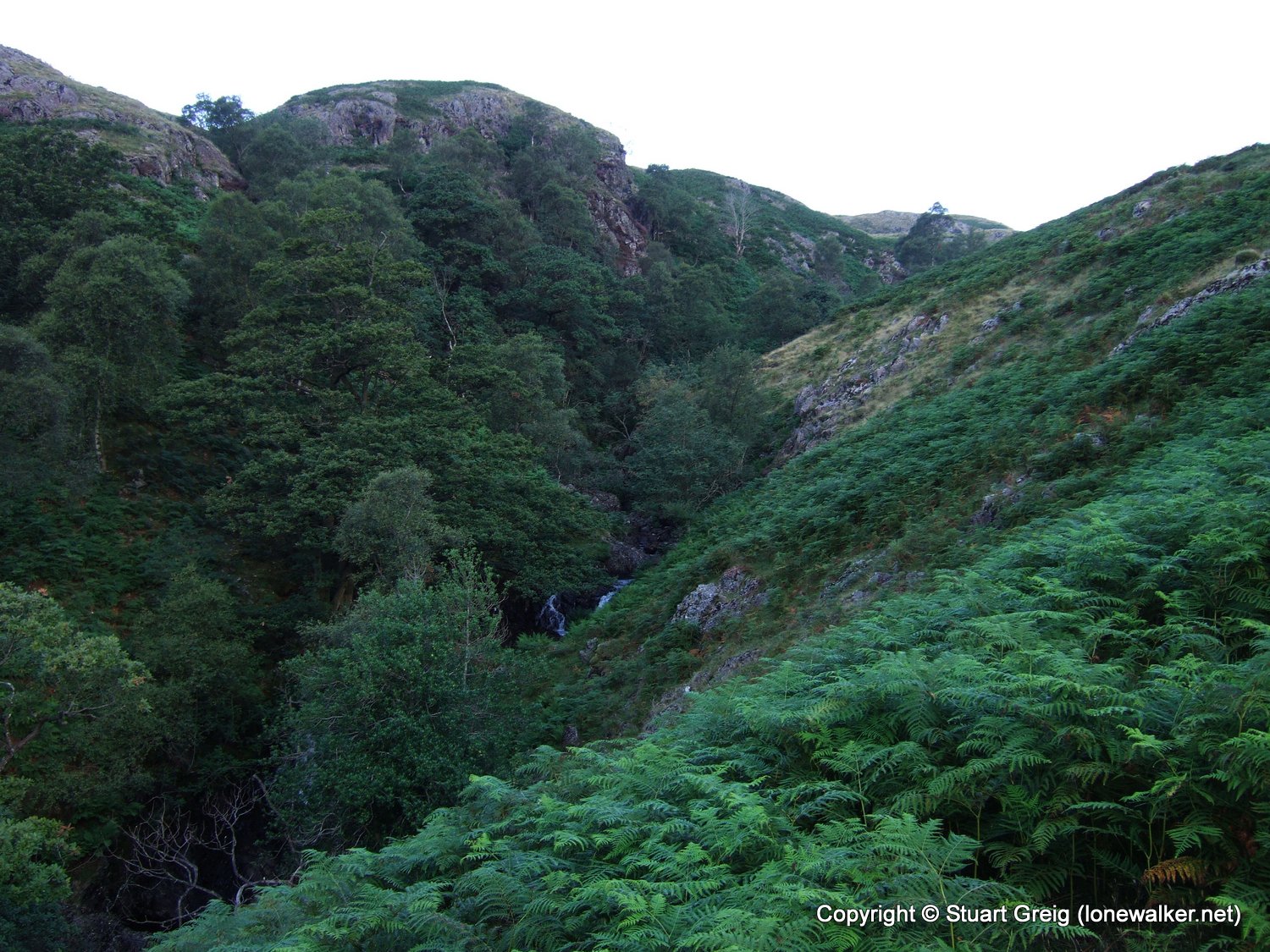 The falls in Scale Gill 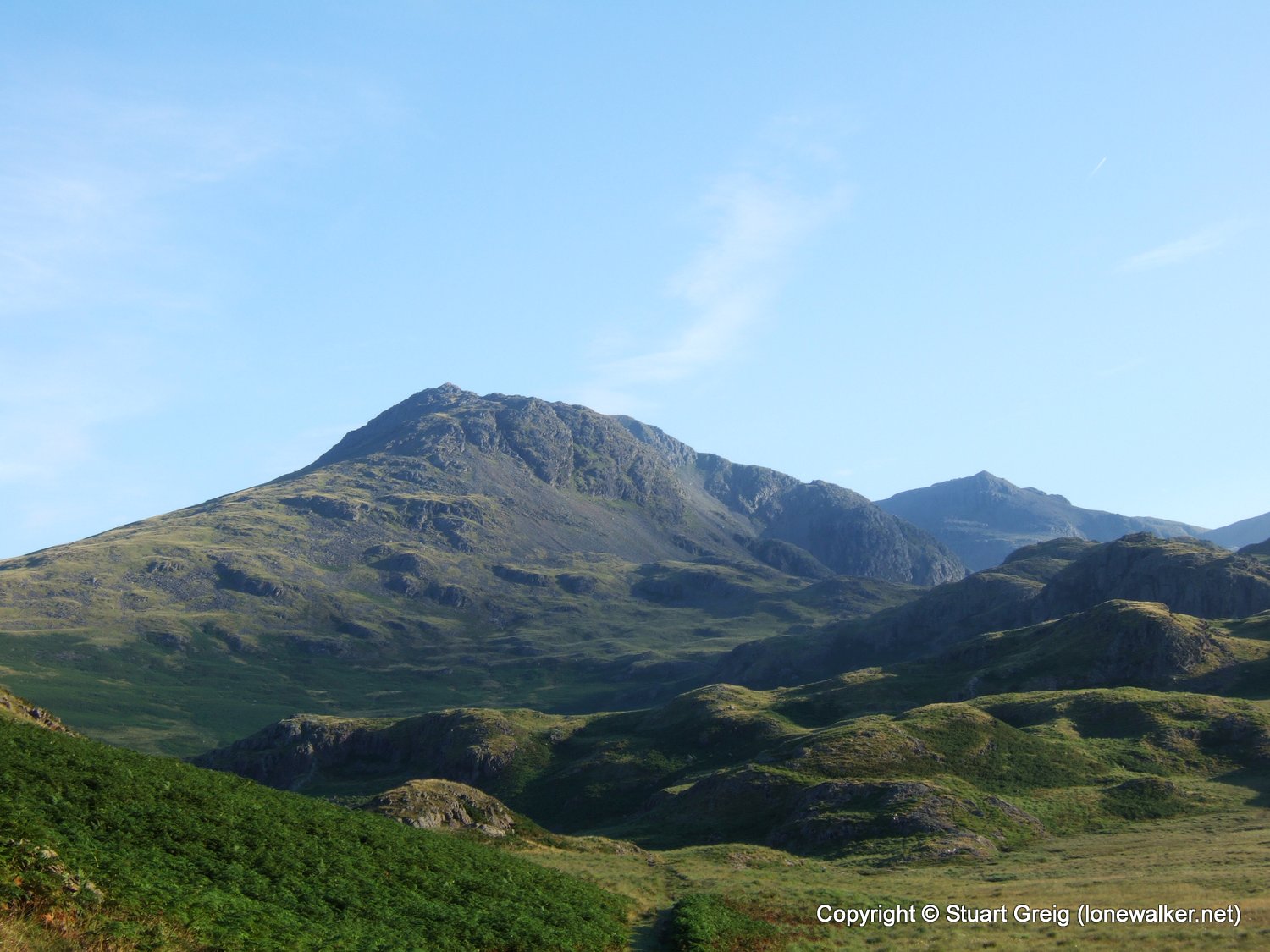 Slight Side and the first sight of Scafell Pike 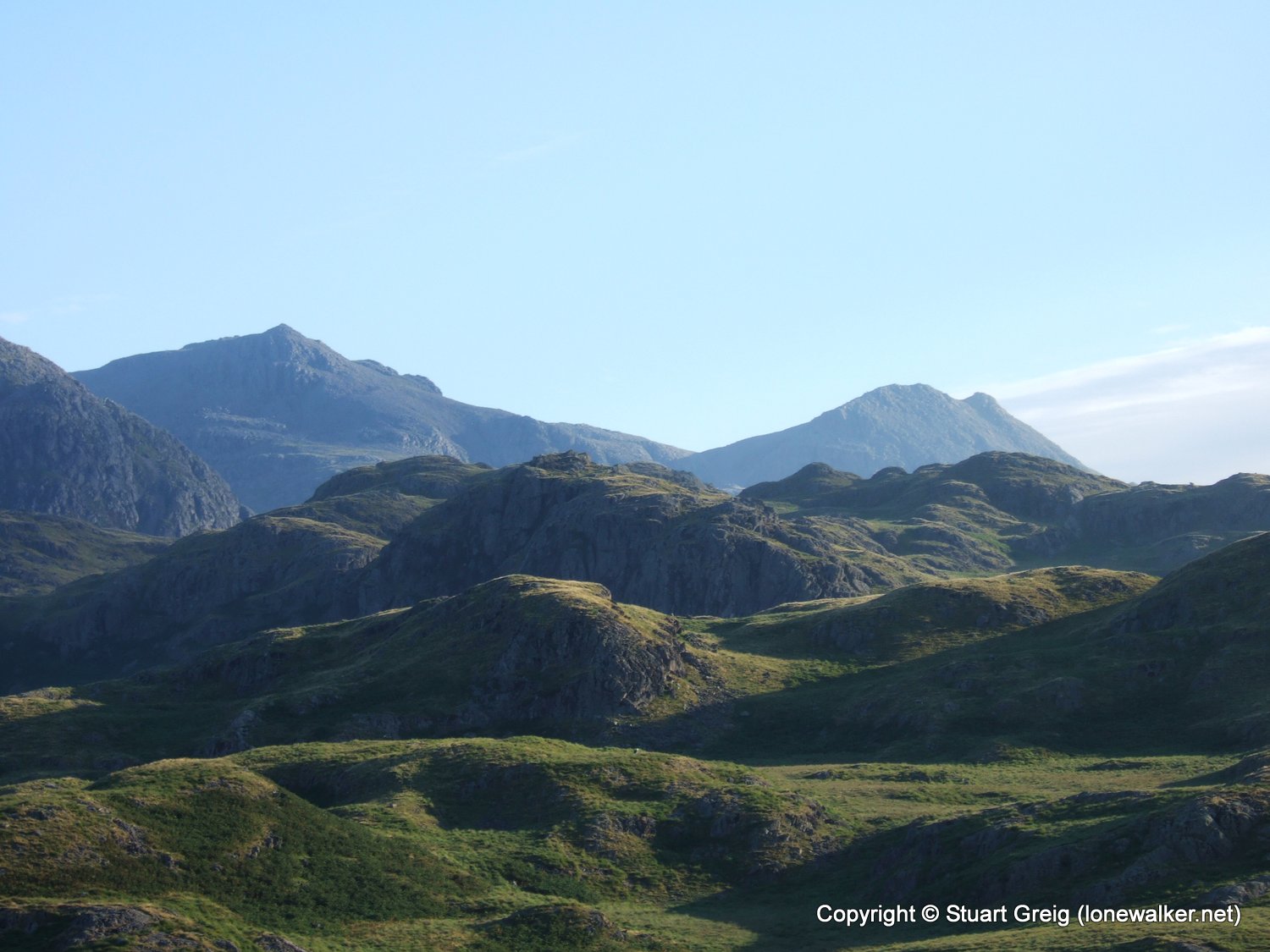 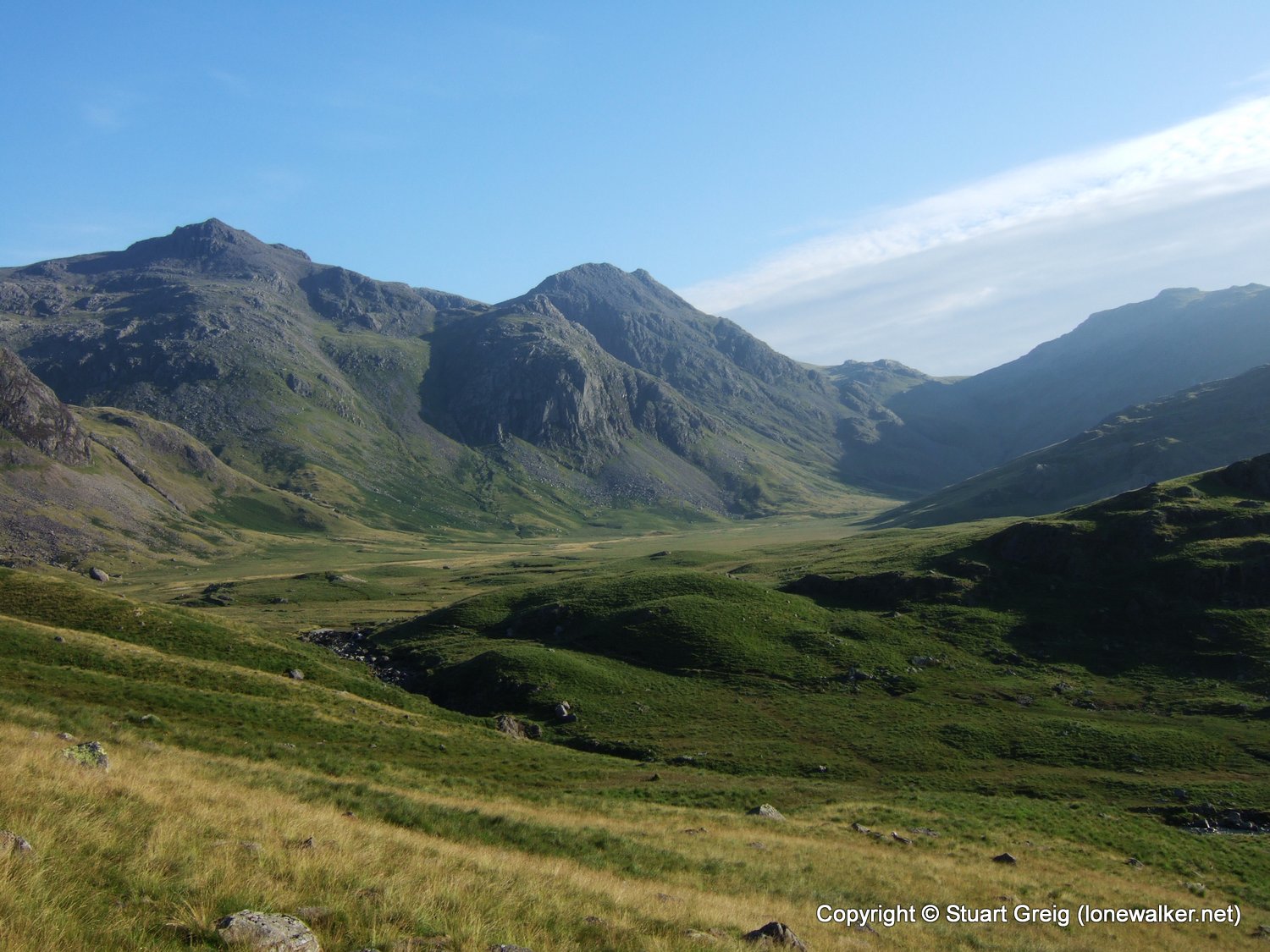 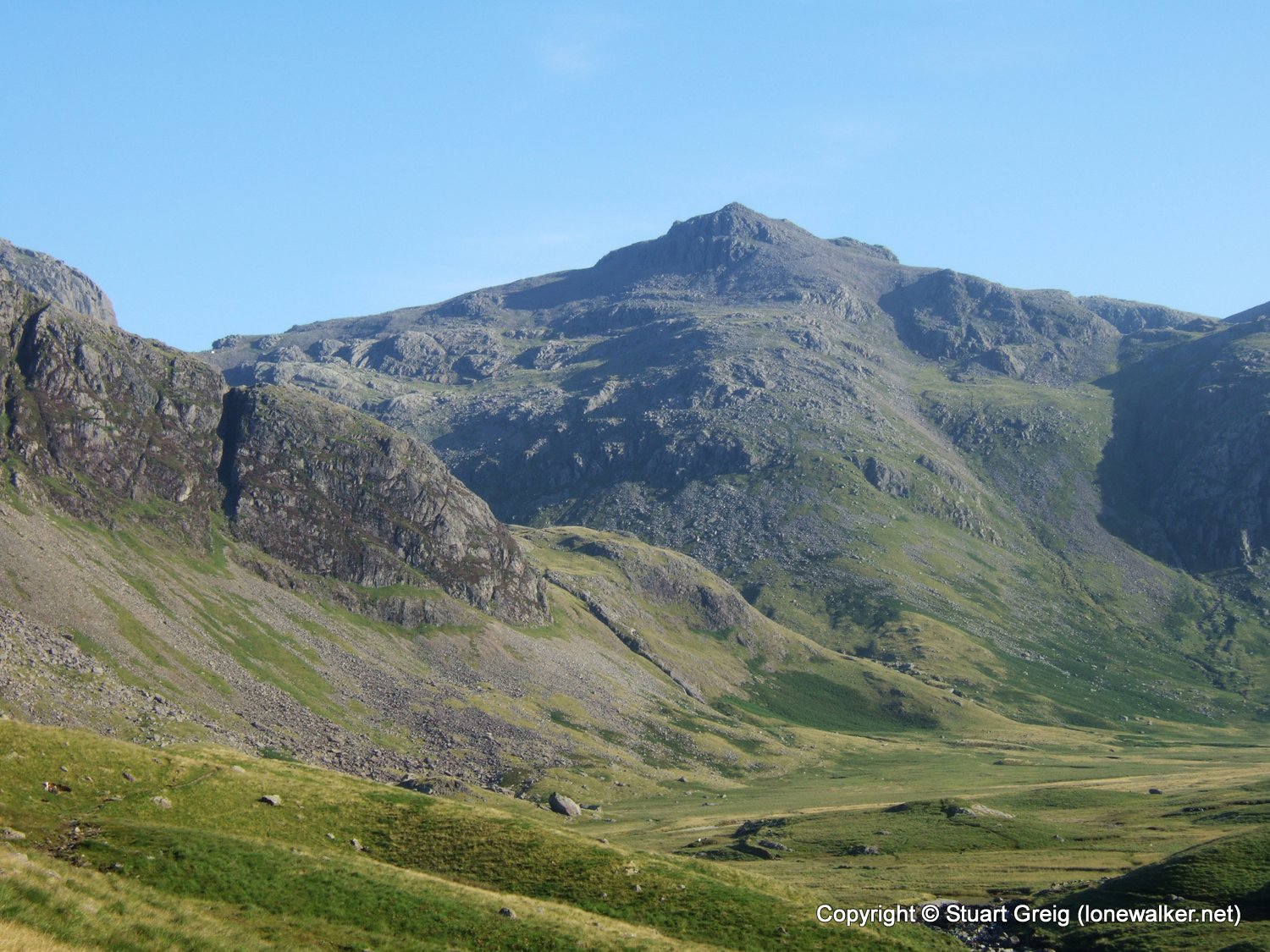 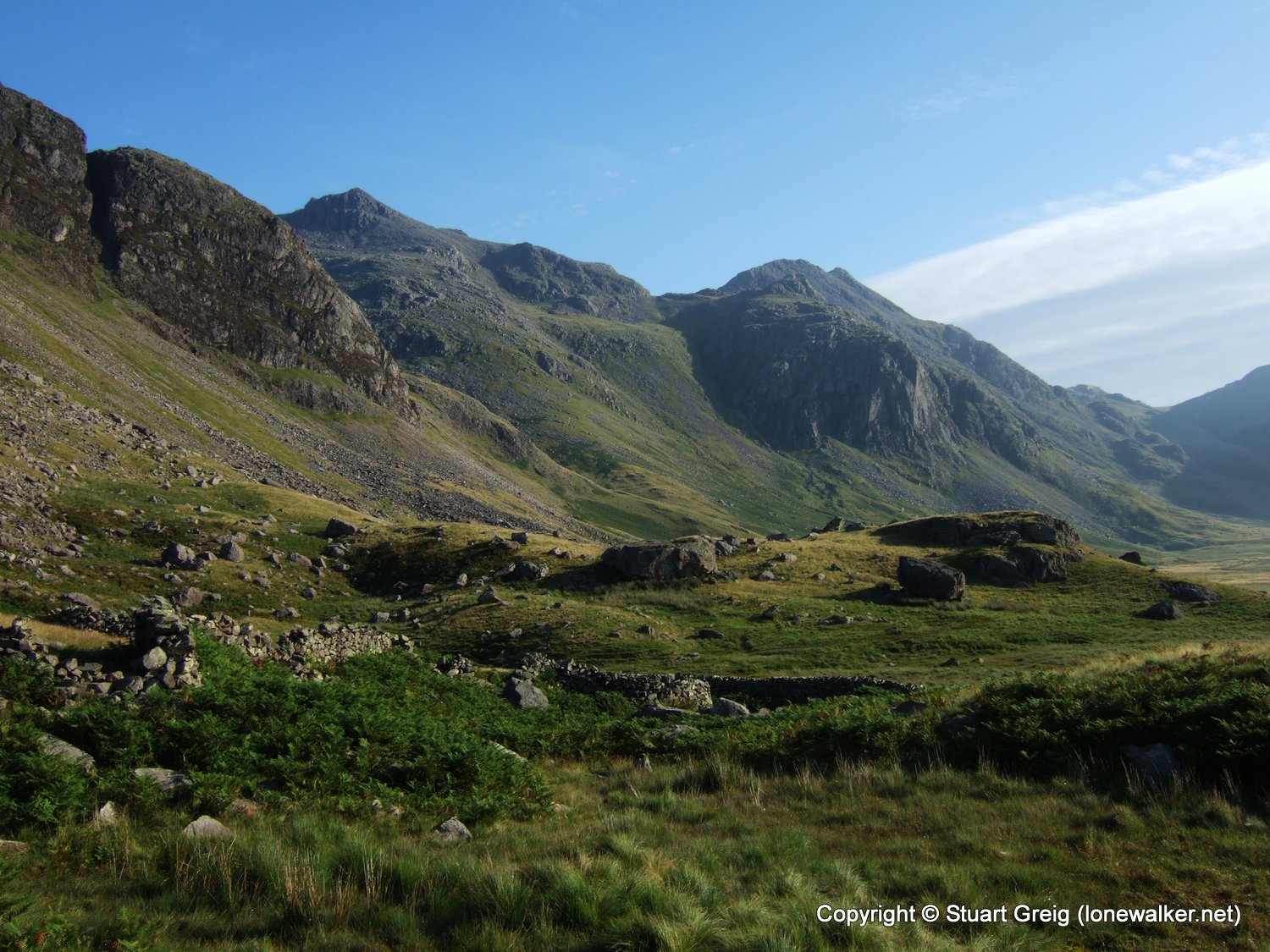 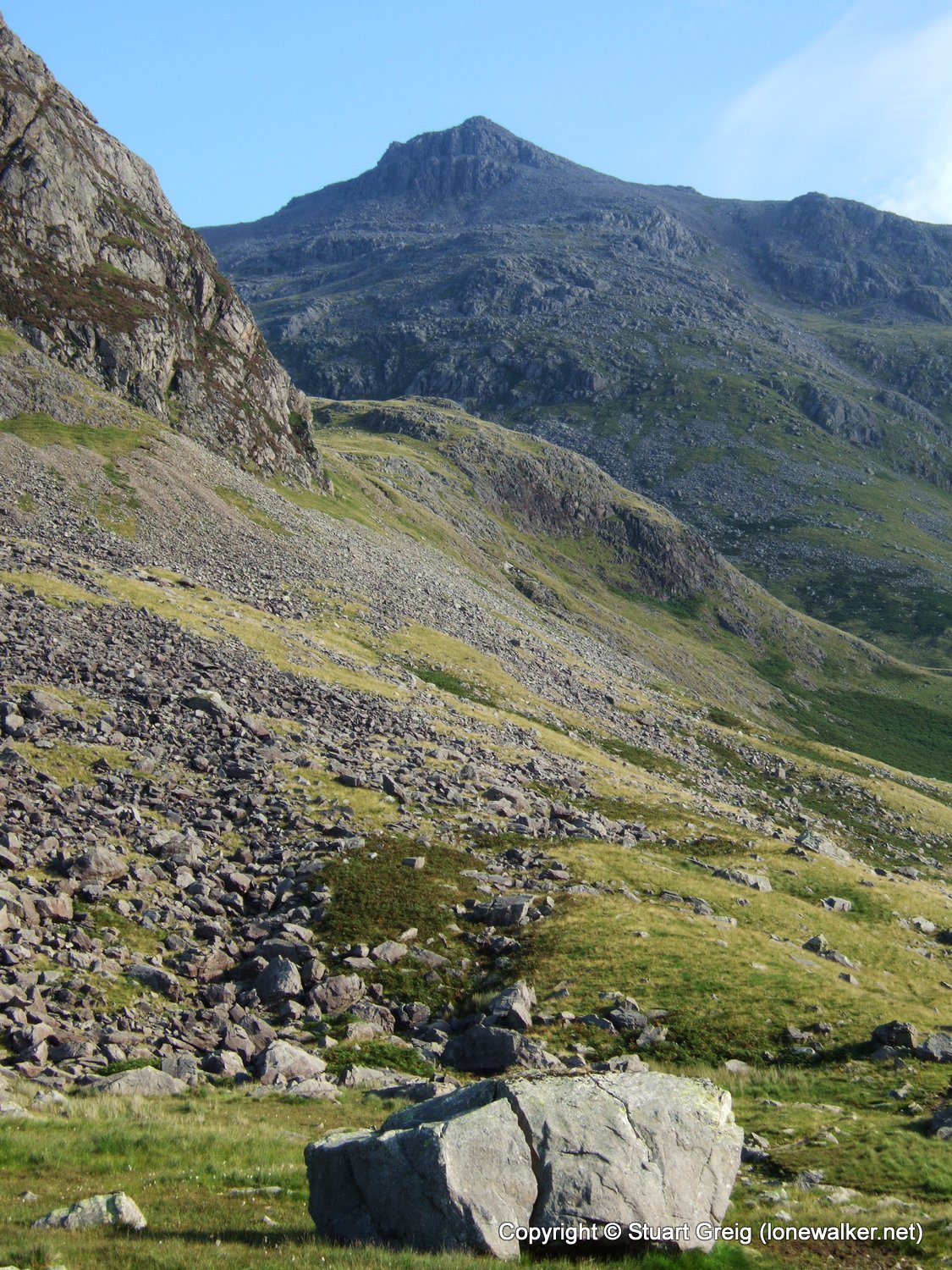 Scafell Pike and one of Sampson’s Stones 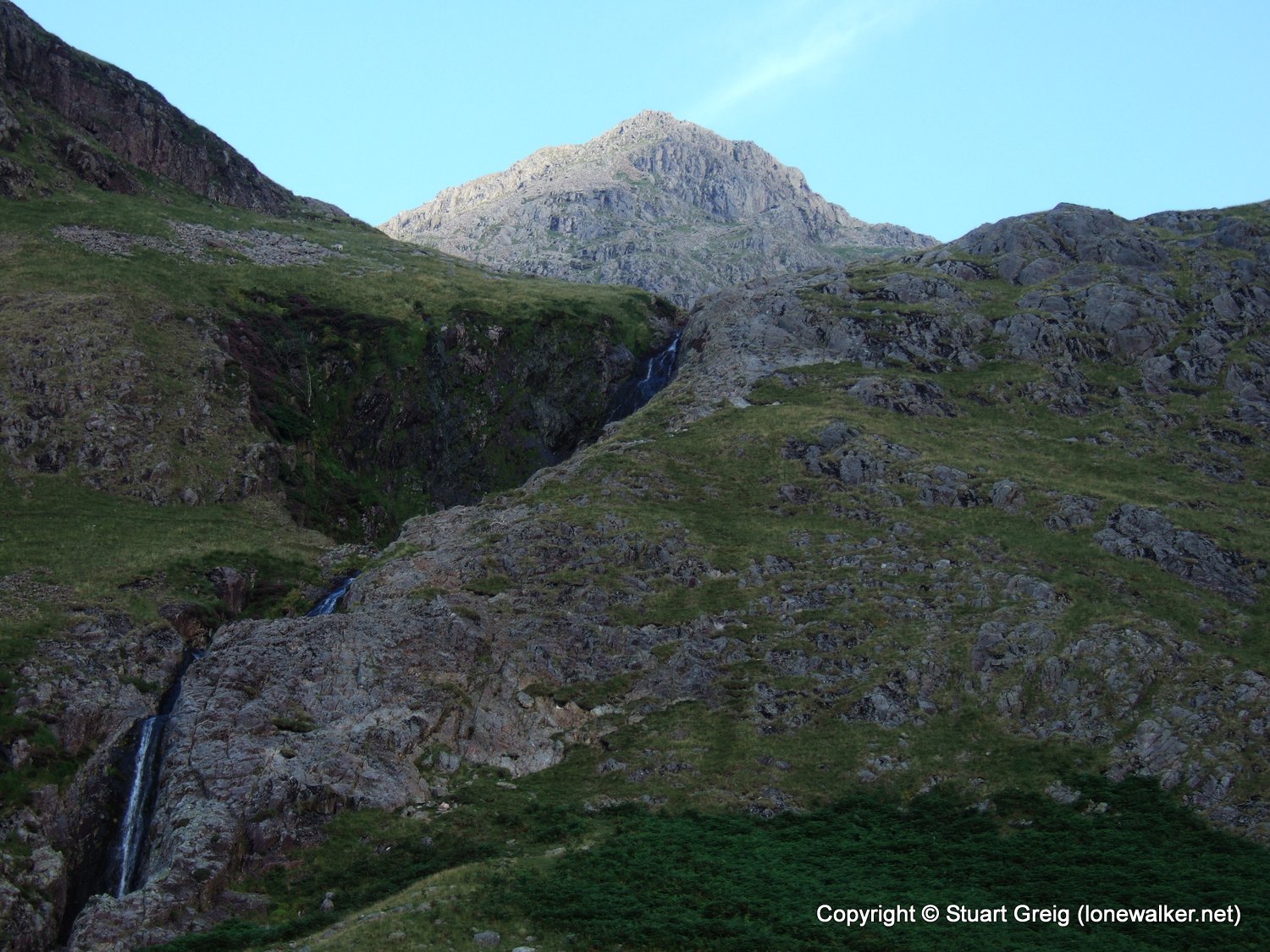 At this point in the walk I was actually slightly ahead of my schedule for the day. I’d estimated 2 hours to the foot of Little Narrowcove and that was only just ahead. I made the fatal mistake, just after this photo, of leaving the faint track and taking a “short-cut” across a boulder field to try and cut the corner off the approach to Little Narrowcove. All this actually did was slow me down considerably.

I entered Little Narrowcove slightly above the level I would have done on the path, but as a result I’d spent 30 minutes scrambling over car sized boulders trying to keep in line with my destination. 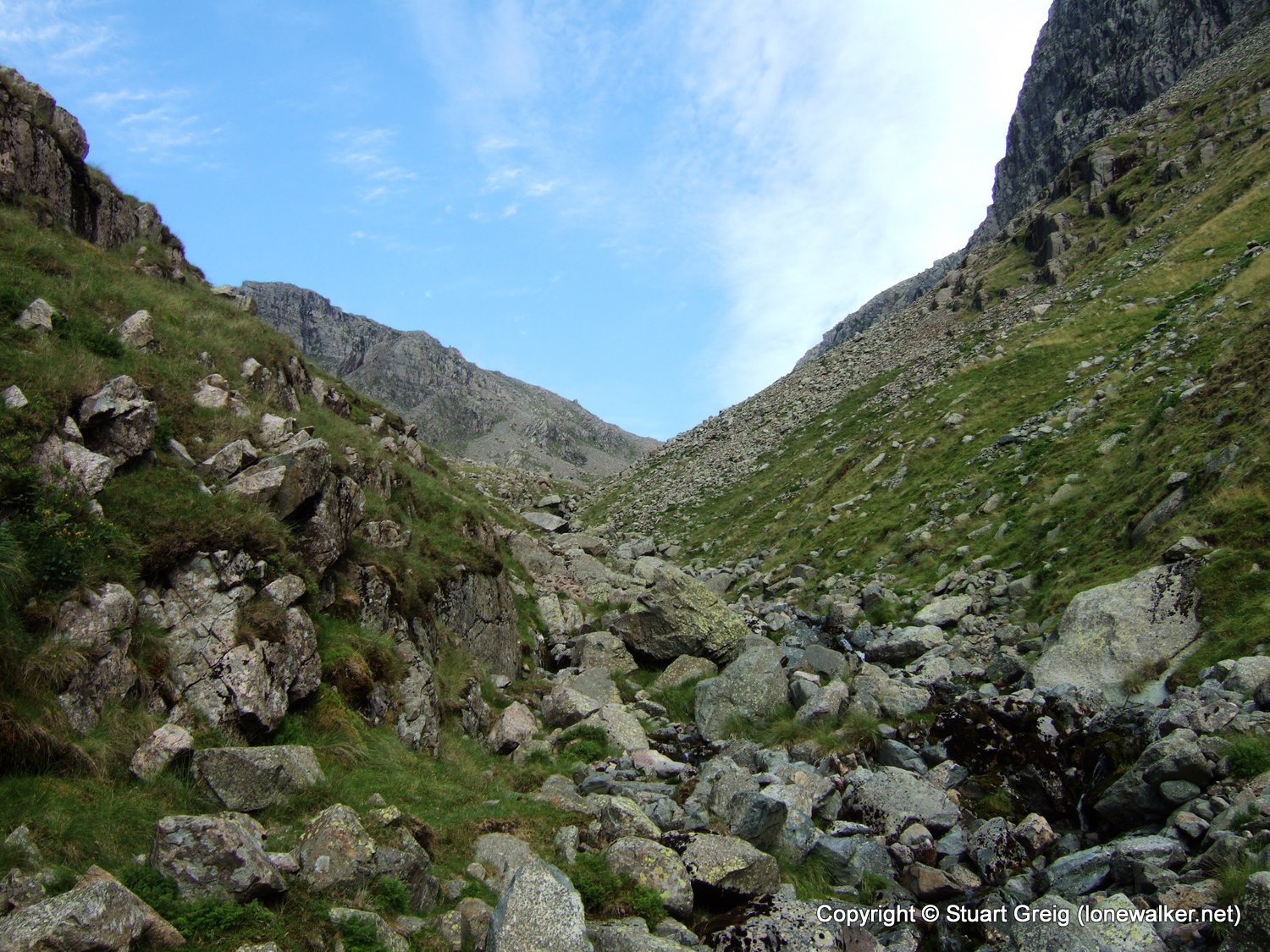 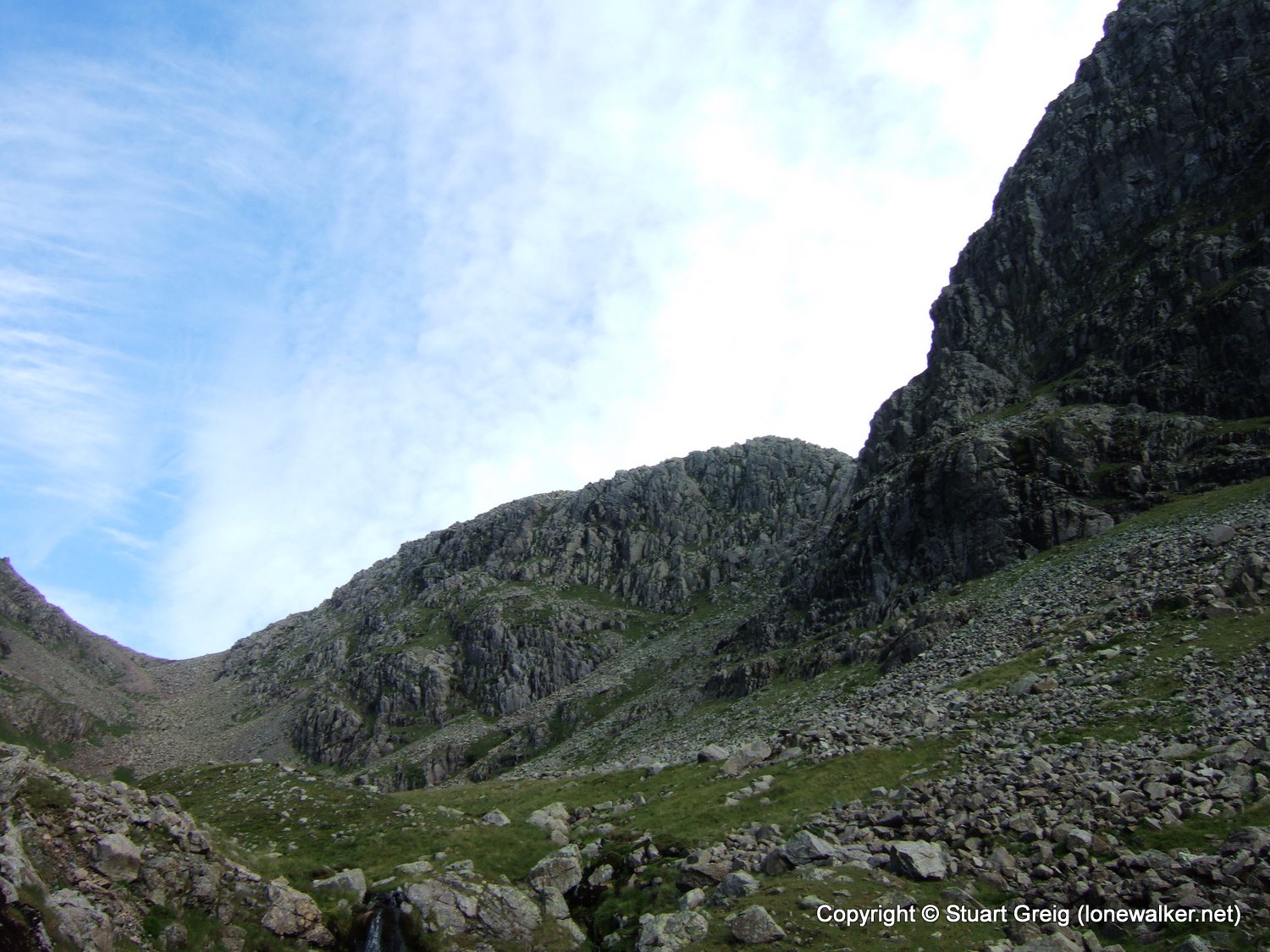 Broad Crag and the bottom part of Ill Crag

Little Narrowcove is ferociously steep and there is no path up the greater length of it. I’d allowed 1 hour for the climb to the top, but hadn’t counted on the roughness of the ground underfoot. The climb actually took me an hour and ten minutes, with several gasping breaks. The final section to the col, seen to the left of shot in the picture above is loose scree all the way, although there is a little path through the middle of it, which I unfortunately missed. I tried to keep to the more stable footing on the left of the slope and consequently ended up with a tricky last few yards of ascent. 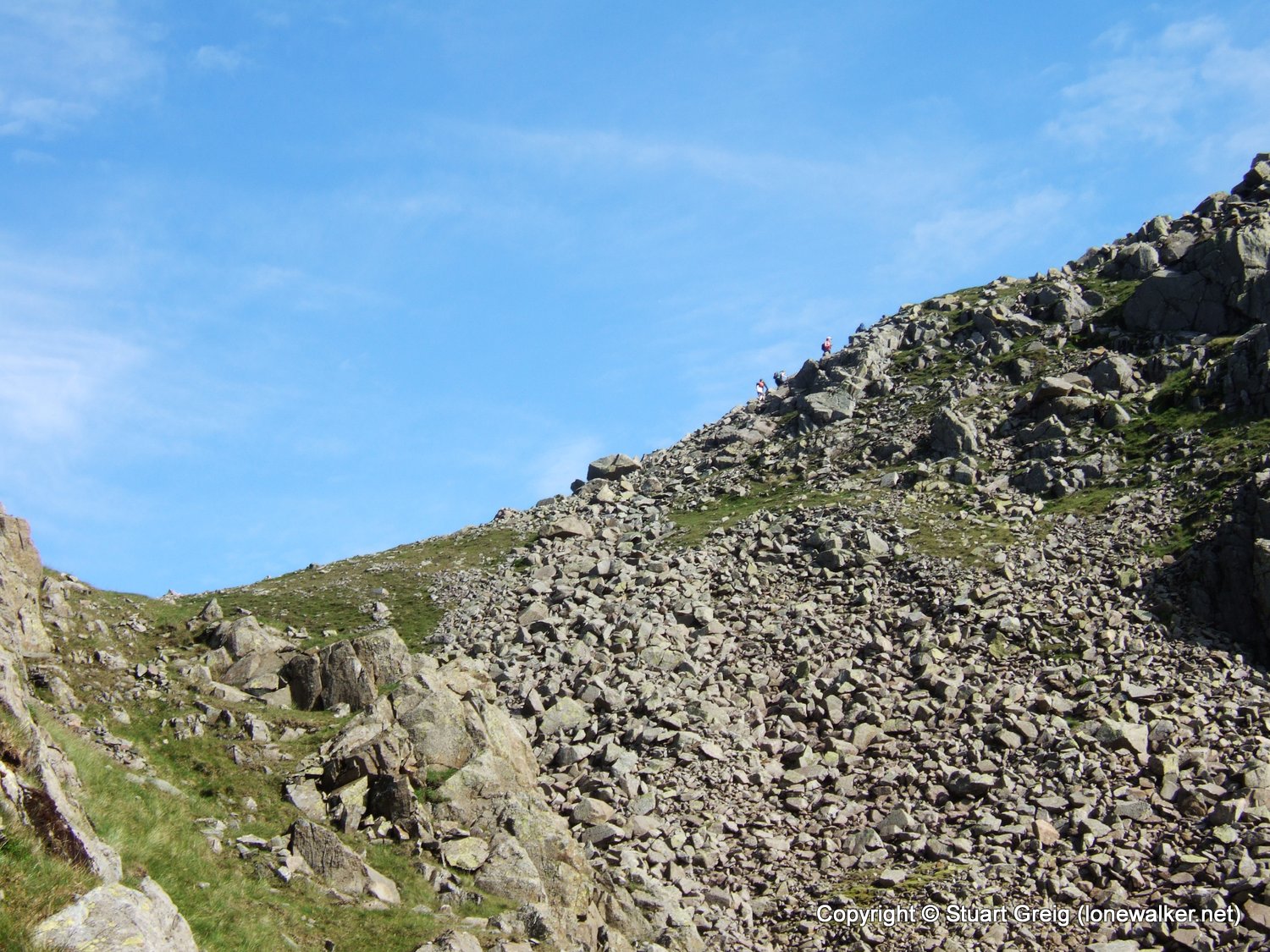 Walkers climbing from the col to Broad Crag 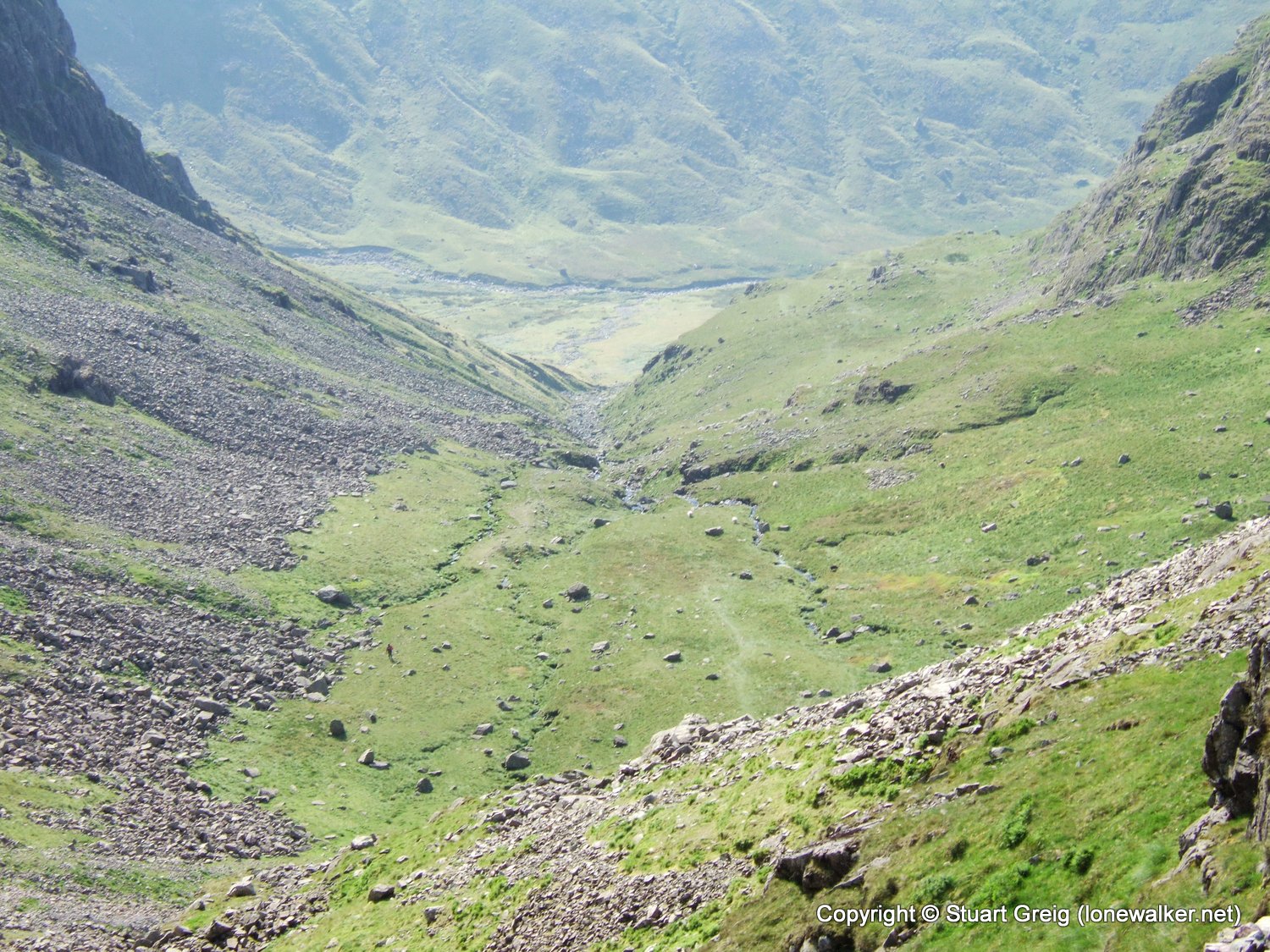 Can you spot the walker; after completing descent from Ill Crag over the boulders and scree

I’d watched one walker pick his way gingerly down the rock and scree between Green Crag and Ill Crag, something I wouldn’t recommend, having watched him doing it. But he managed it without incident and gave me a nice scale measurement for the photo above, looking back down into Little Narrowcove, from a point just below the col. 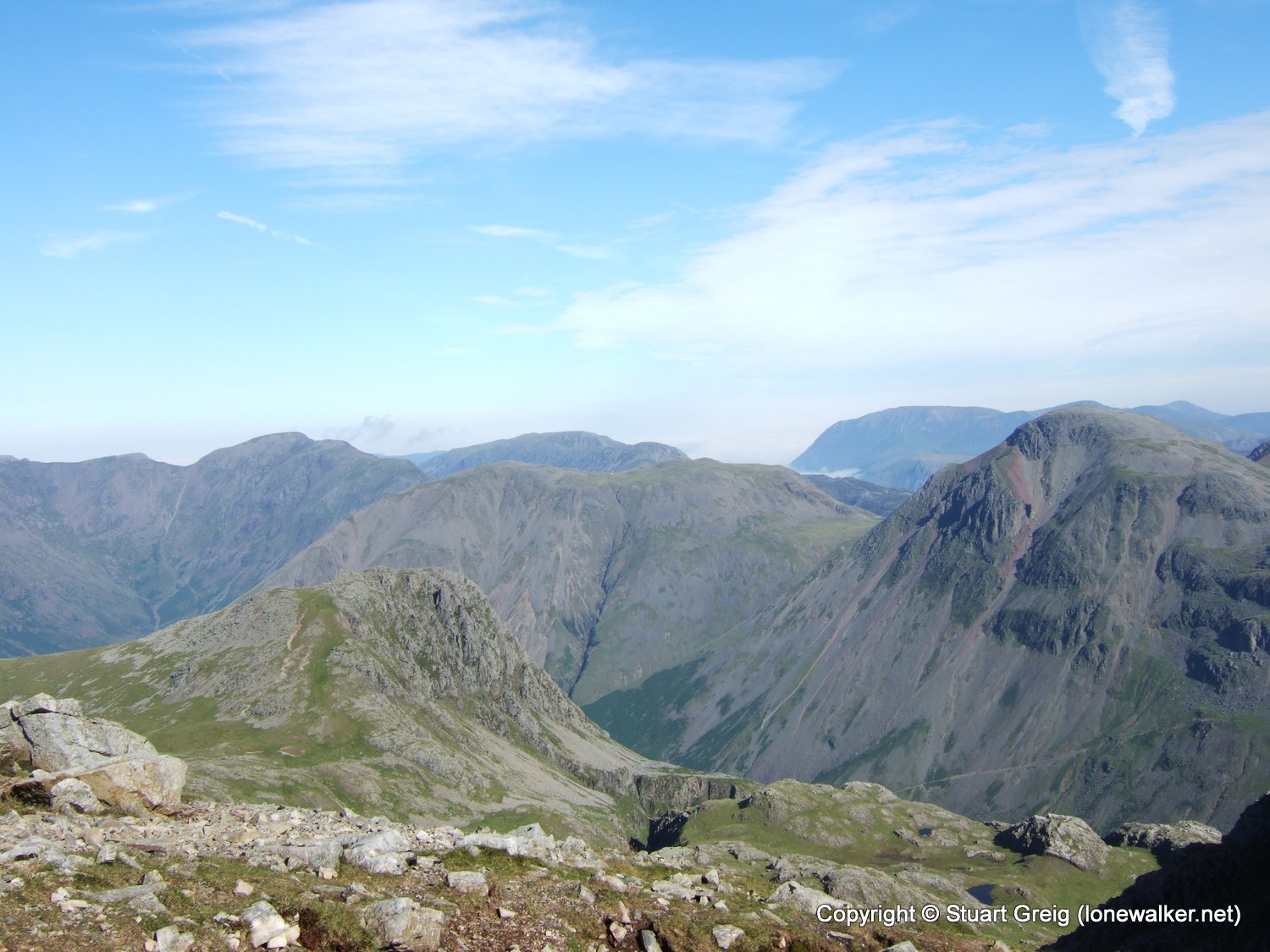 I finally made it to the col, still 10 minutes walk from the summit, although the gradient doesn’t diminish there is at least a clear track to follow from this point. I passed a number of people as they were coming down and heading from Broad Crag. I got some great views across to Great Gable, the other side of the mountain this time, from the view I’d had on my previous walk. I was pleased that the top was clear, especially after the disappointment of thick cloud on Snowdon a week or so ago. 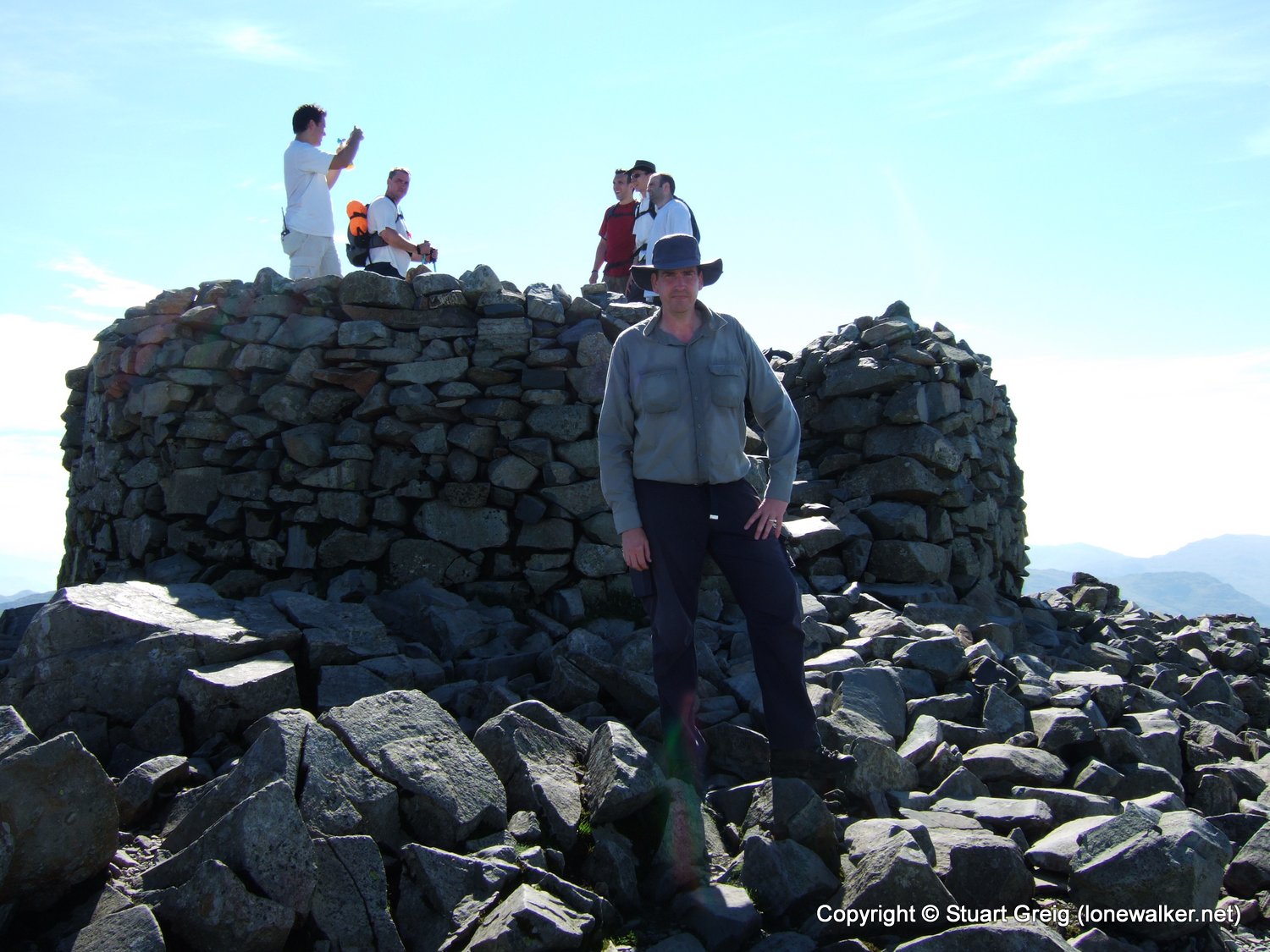 Me on the summit of Scafell Pike

I was drenched with sweat when I finally poured myself onto a handy rock on the summit. There were loads of people about, several of whom were raising a large flag – part of a National Three Peaks Challenge I later found out. It seems that I’d picked a bad day for the climb, it was an organised 3 peaks weekend and the crowds just kept coming. As soon as one group left, another arrived. 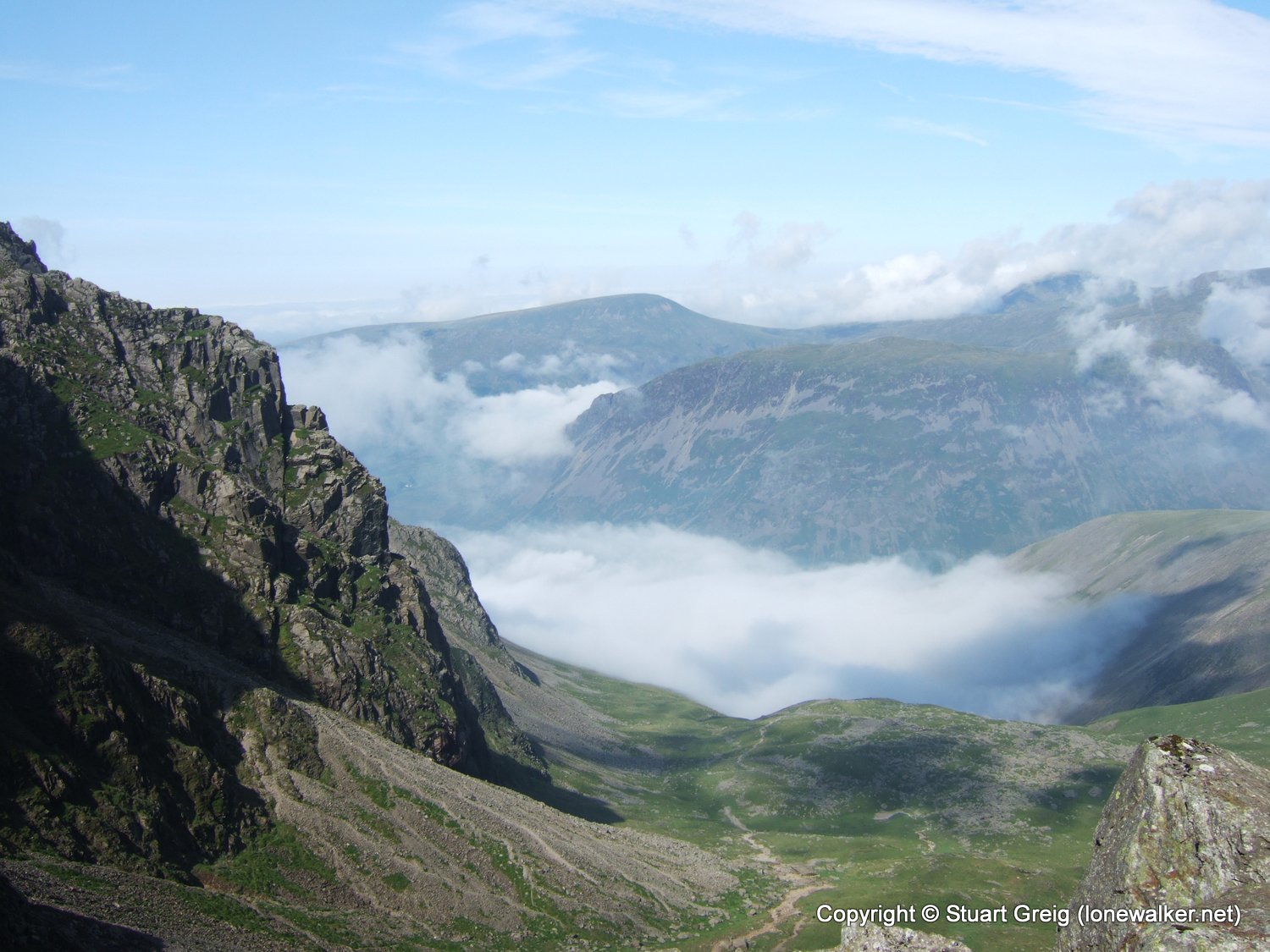 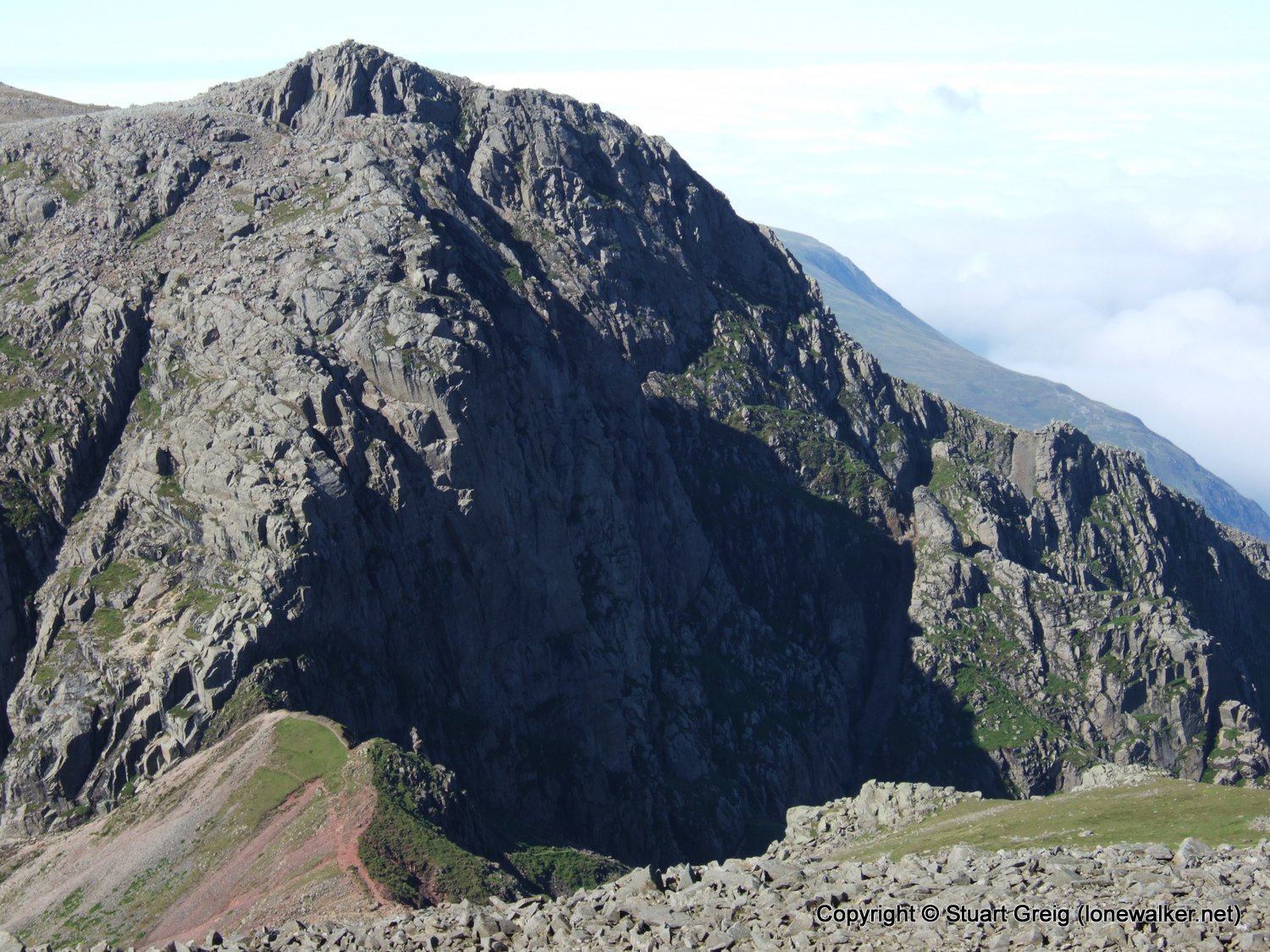 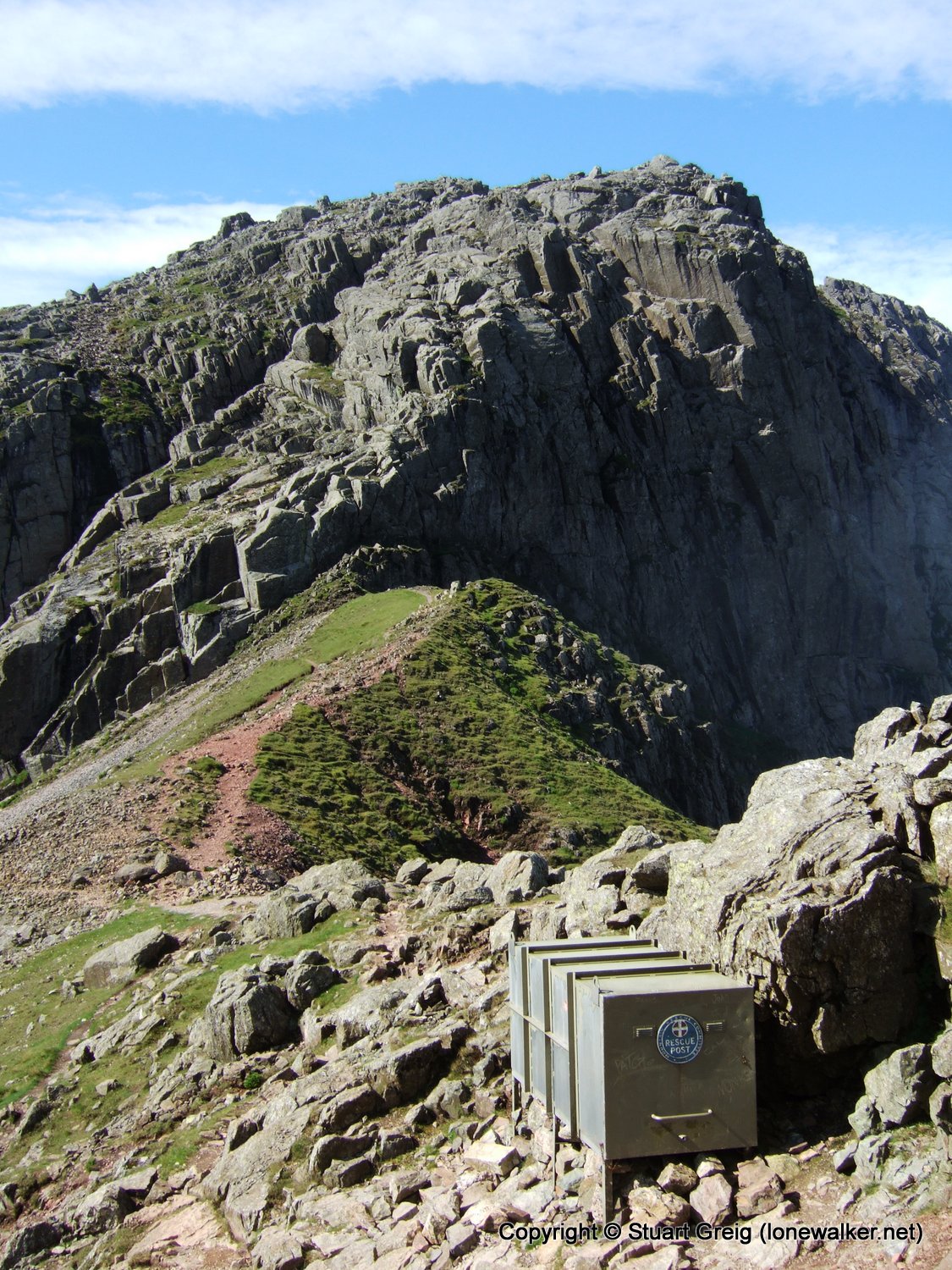 At this point I had pretty much abandoned any thought of continuing up Lord’s Rake and Scafell, I was way behind schedule, having taken much longer to recover on Scafell Pike than I expected. So it was with some disappointment that I took the easier route back to the car, down Broad Stand. 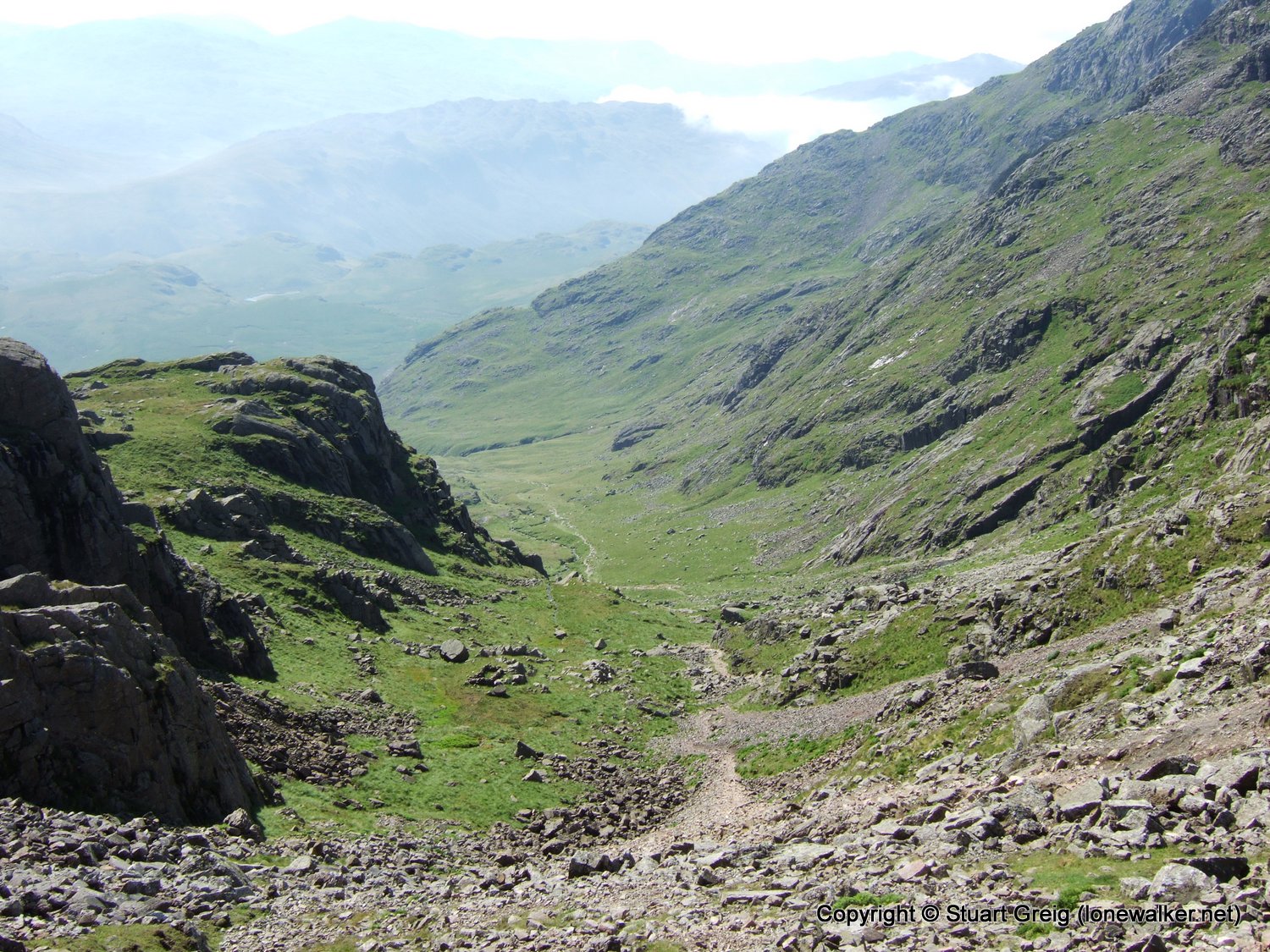 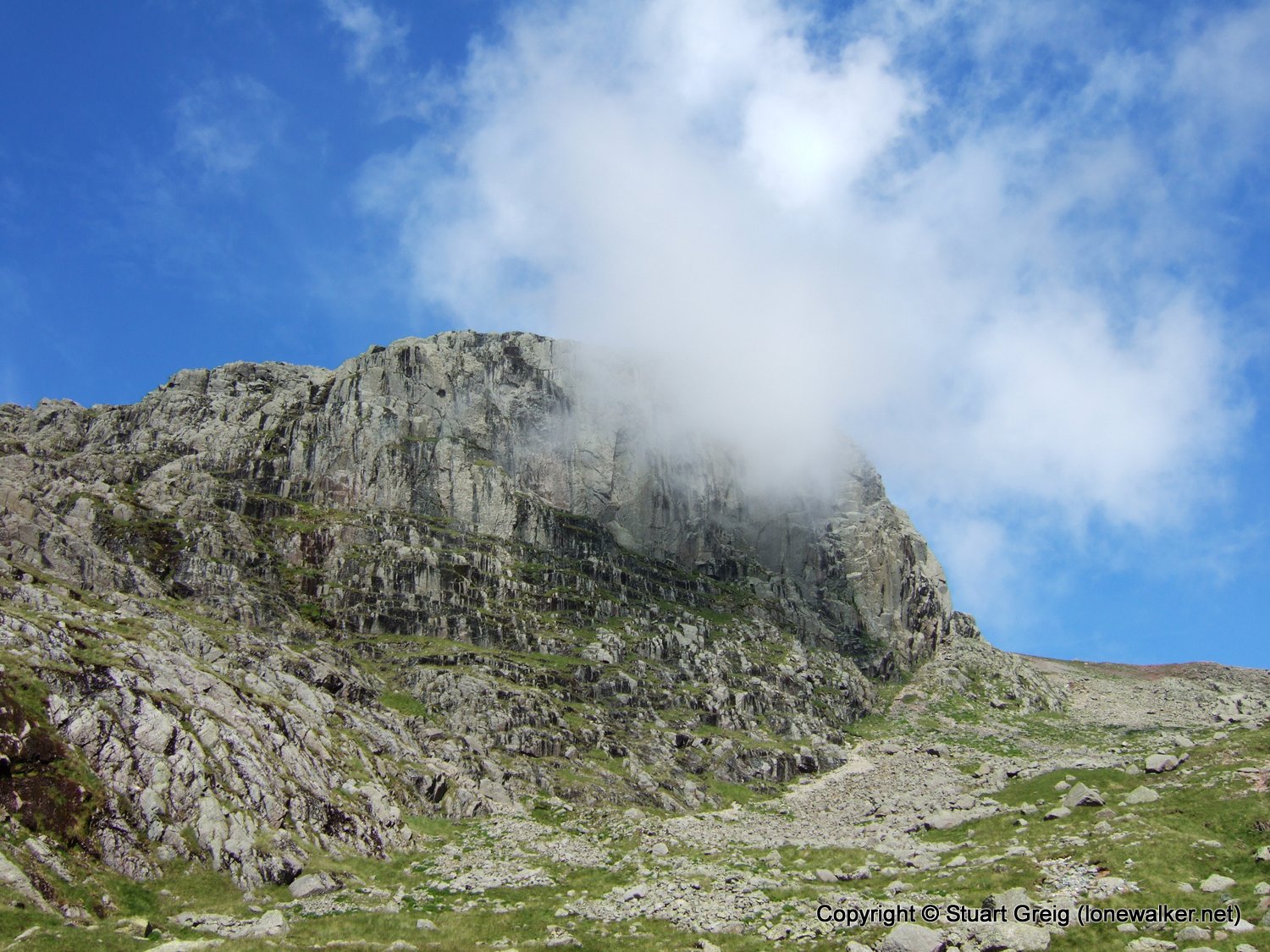 Looking back to Scafell 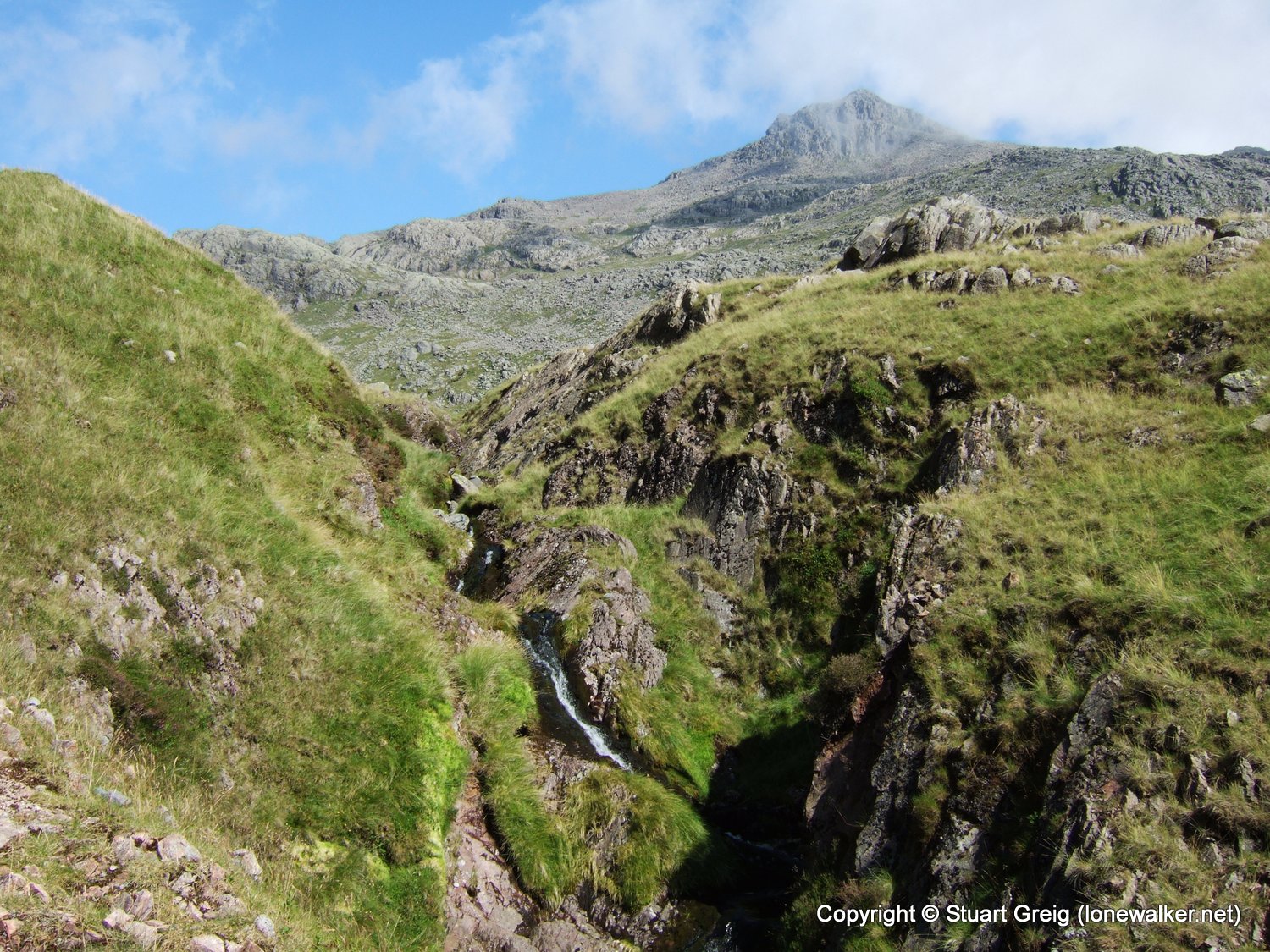 How Beck waterfalls with Scafell Pike behind 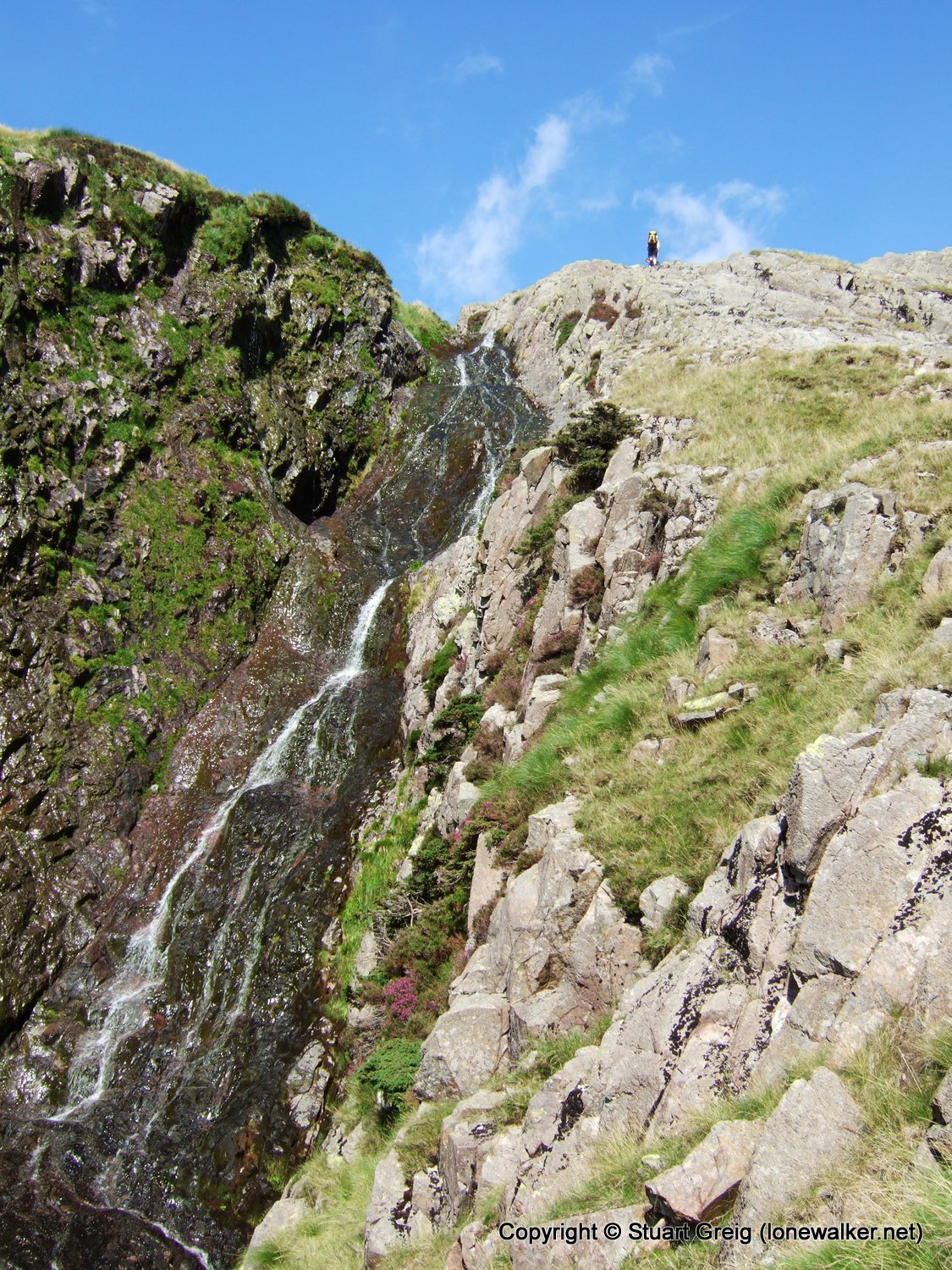 Cam Spout, with walker at the top for scale 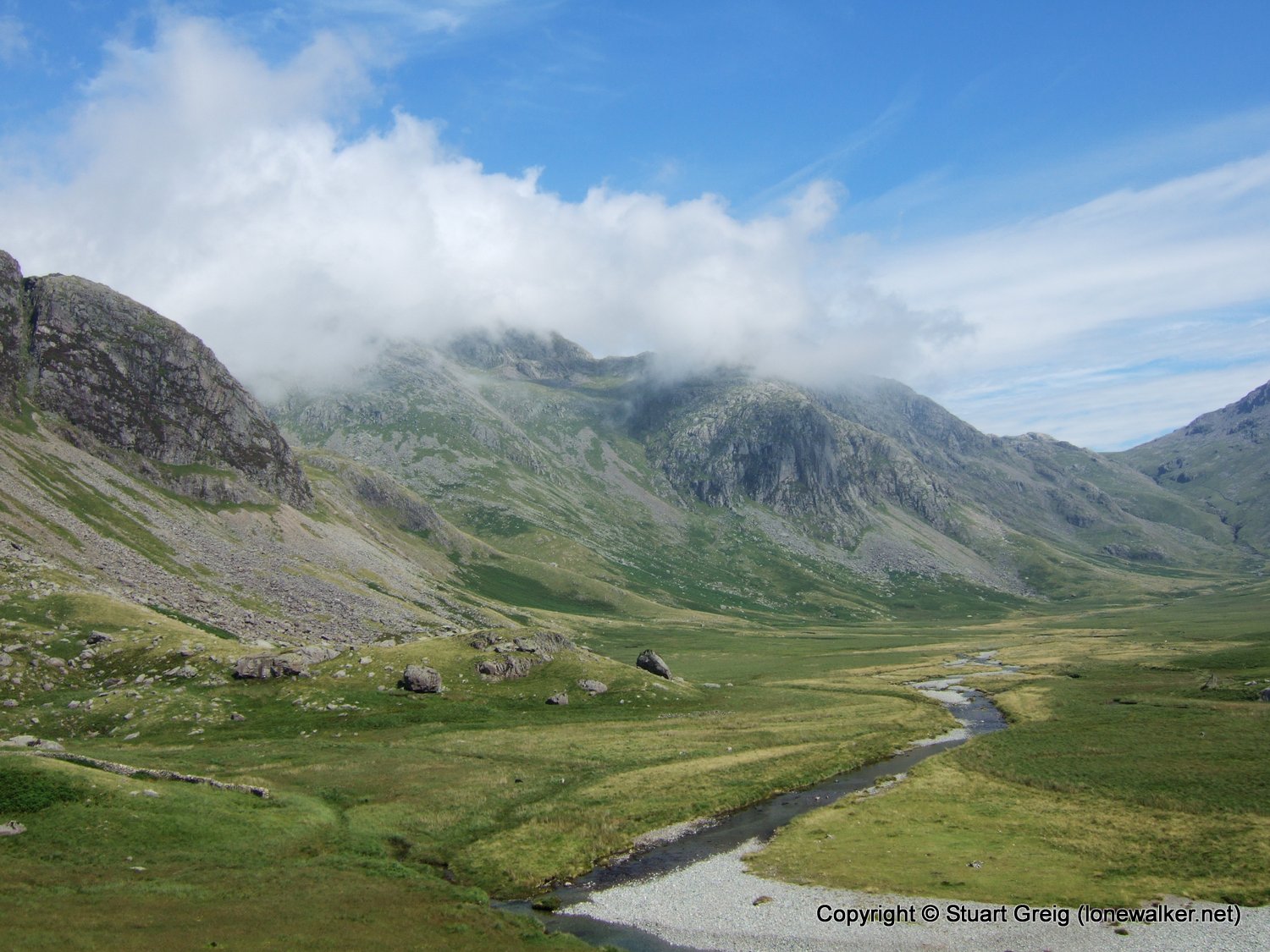 Looking back to the Scafells covered in cloud

I’d timed my visit to the summit with perfection. The cloud formed quickly and then sat there for as long as I could see it. 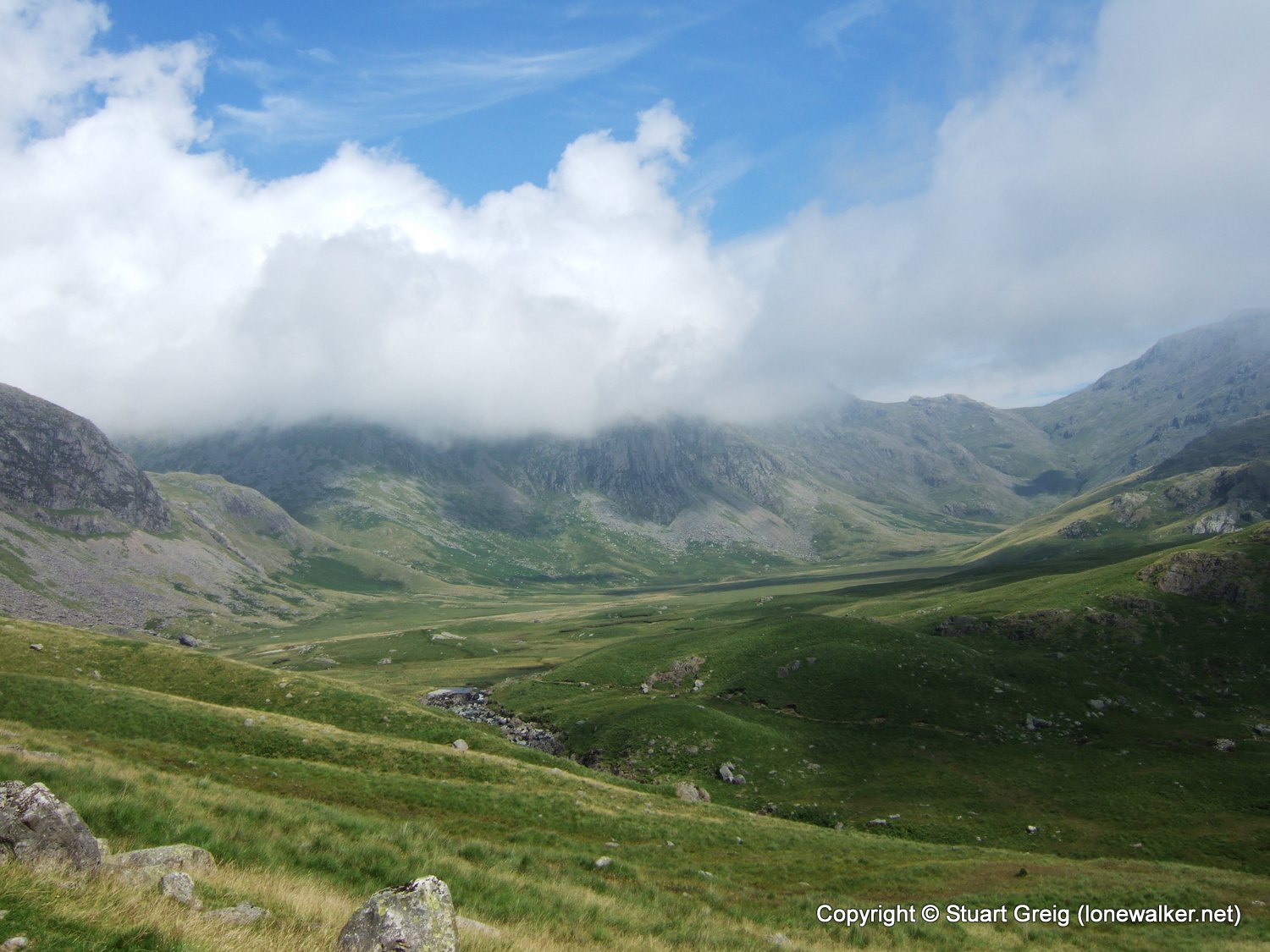 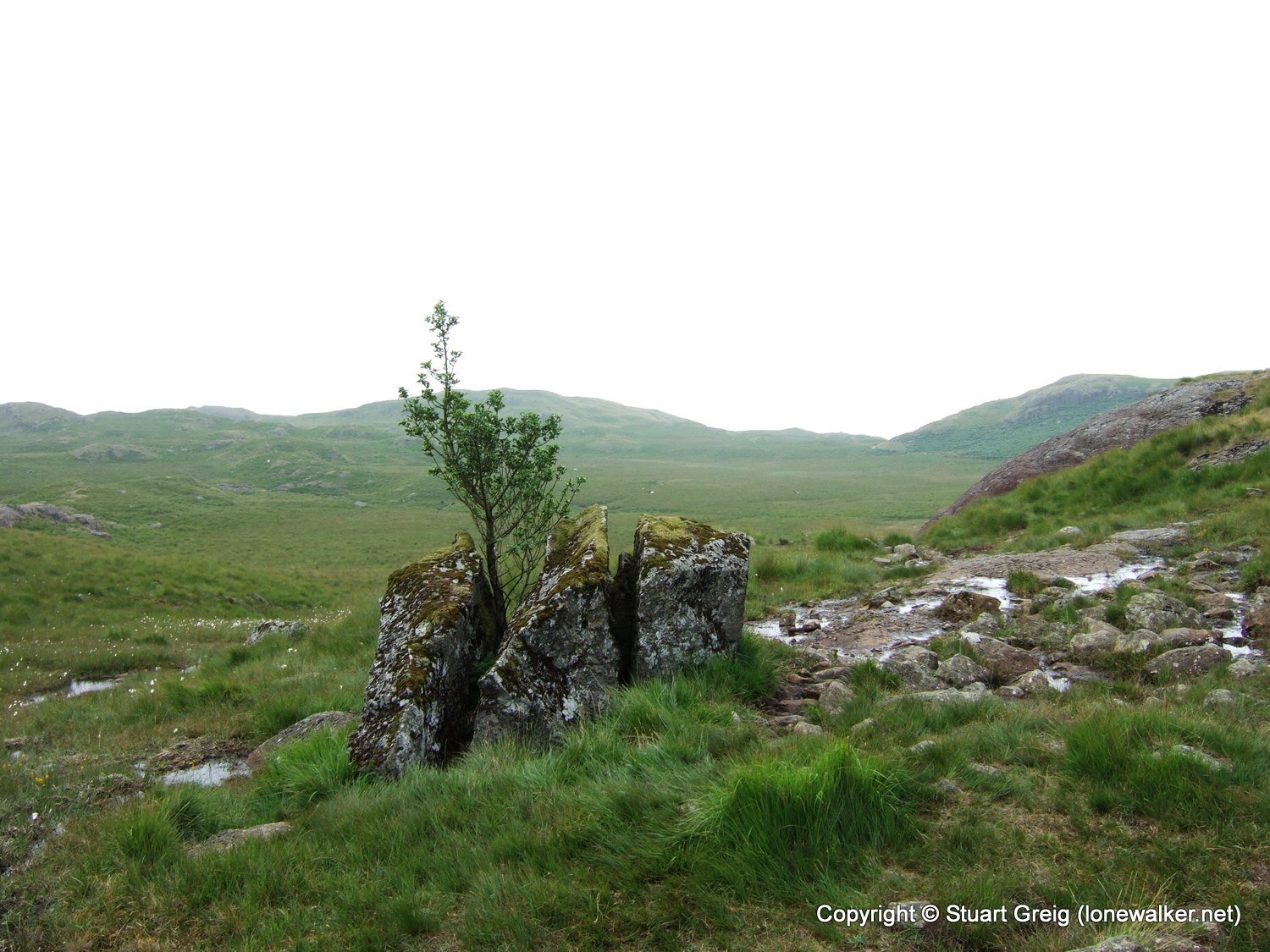 A hard, but rewarding day out. At least in future I won’t have to ascend by what must be the toughest route to the summit.