Download file for GPS
This walk has been in the diary for about a month now, based on Tex’s next available weekend and the fact that we both wanted to walk Snowdon this summer. The idea was to walk the full Snowdon Horseshoe along Crib Goch and return via Y Lliwedd, but as you can see from the map this didn’t happen. As fate would have it the weather forecast was for strong winds, low cloud and light rain, not exactly the perfect recipe for an exposed ridge walk.

We arrived at Pen-y-Pass at 07:45 to find an already rapidly filling car park, probably 20 or 30 vehicles had already arrived and many of those appeared to have been there for a while. There were plenty of people milling about and preparing to set off, so we jumped out of the car, into a strong wind and joined them. The cloud cover was very low and all the surrounding tops were well blanketed. There were occasional glimpses of sunlight in the distance, but they didn’t threaten us as we set off along the PYG track. 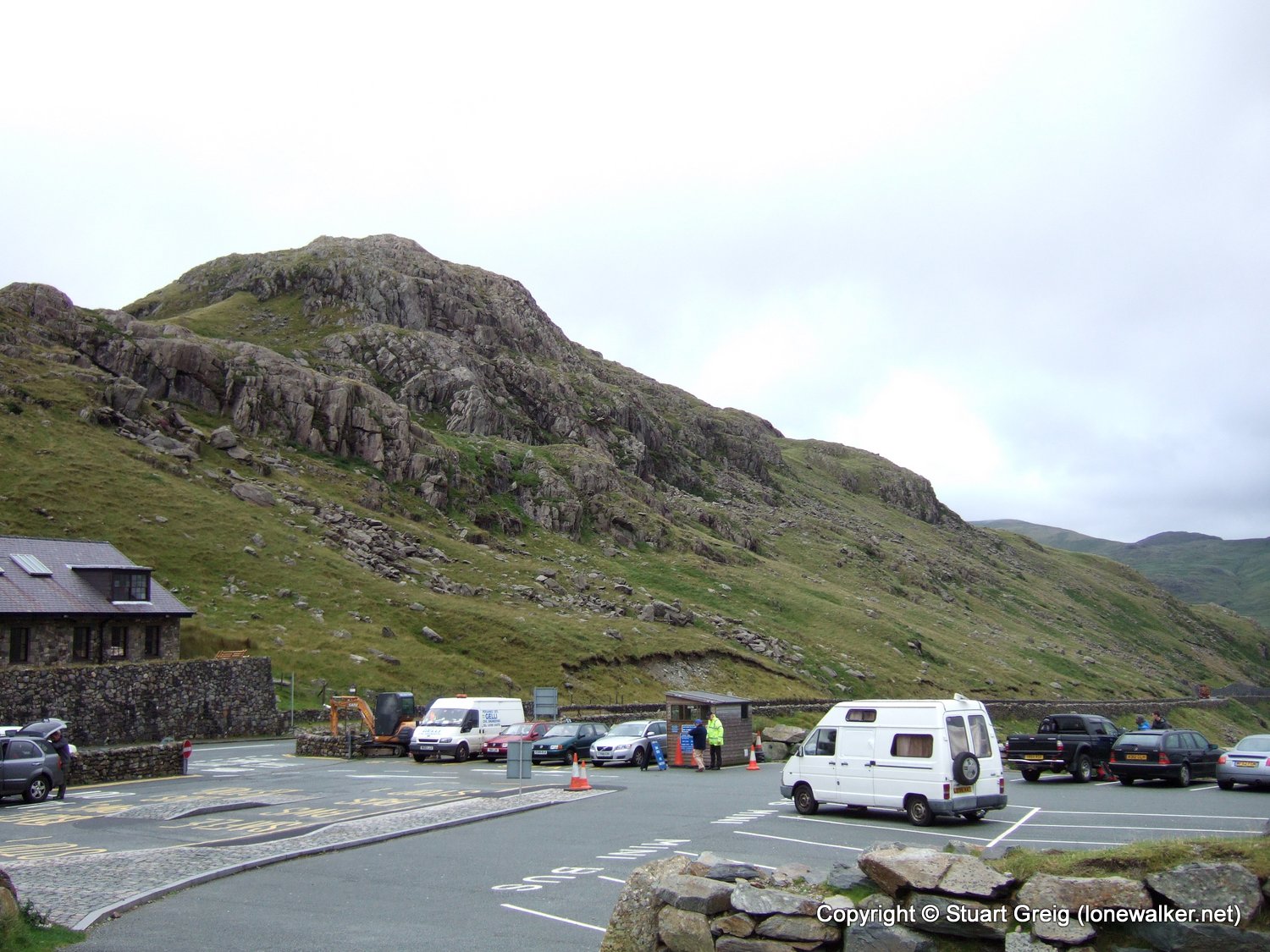 This is only the lower section of the car park, behind me is another section about the same size 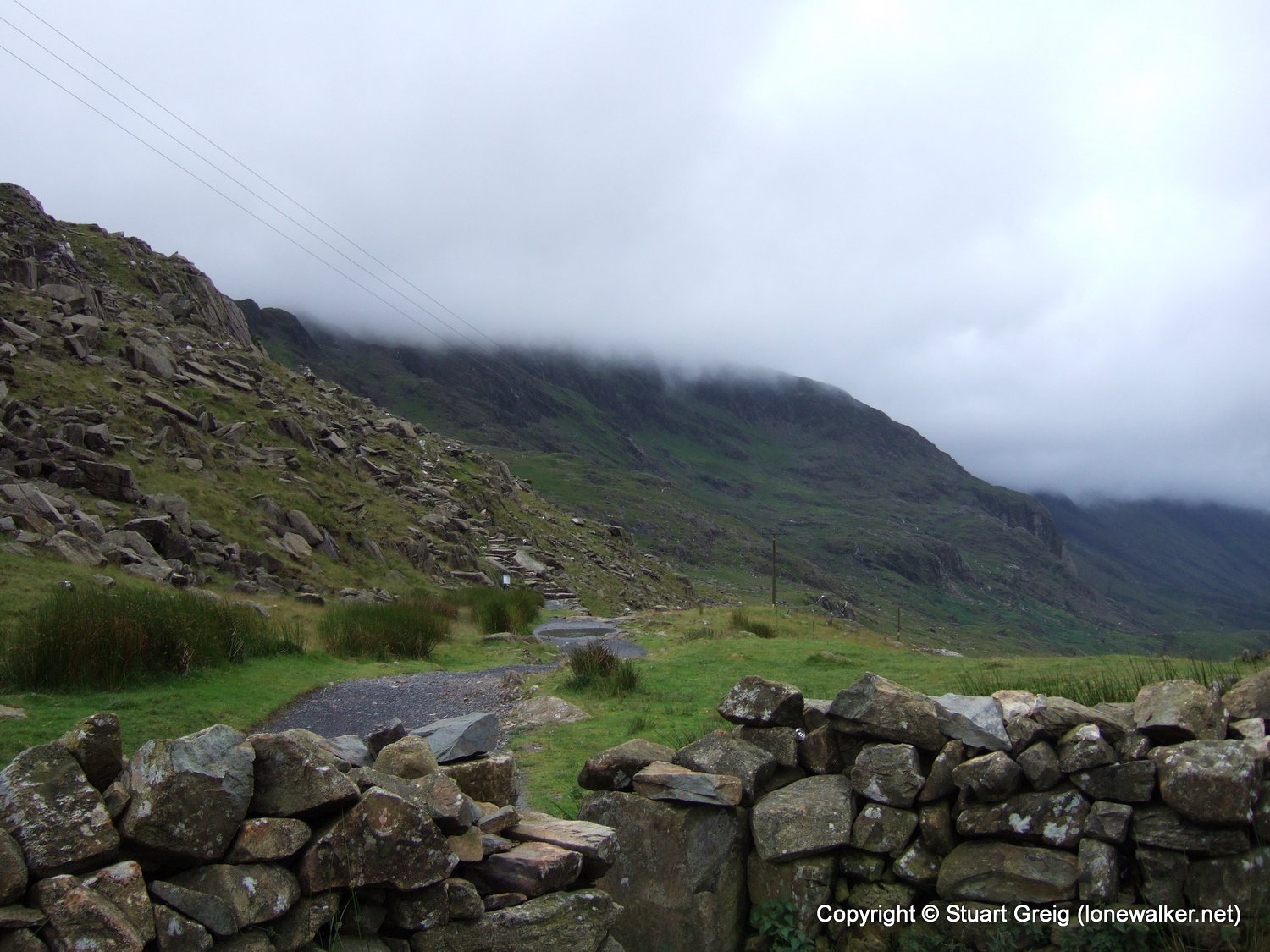 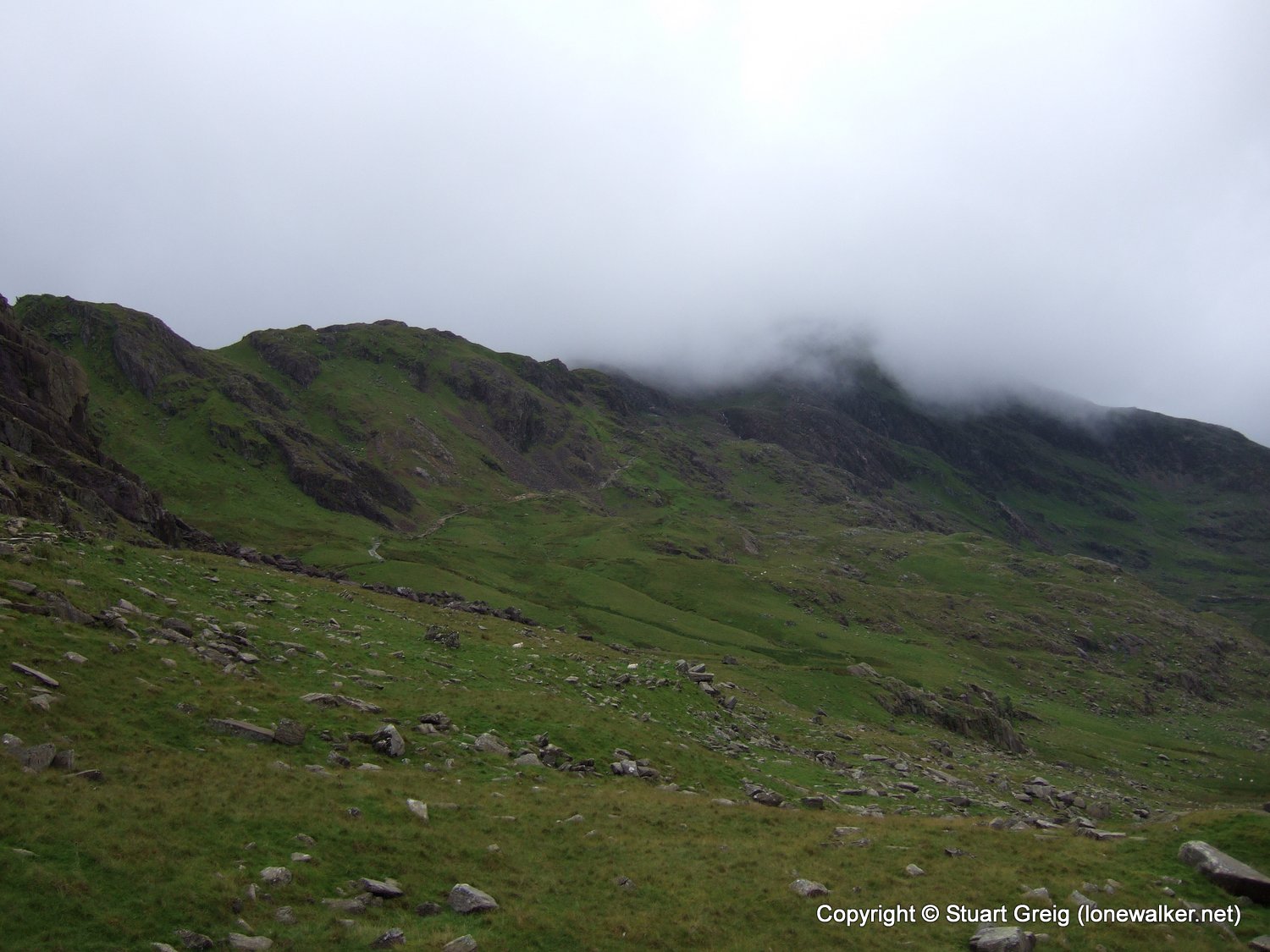 The PYG track hugs the northern side of the ridge, but the incline isn’t as gentle as it appears

Exit to the right hand side of the car park for the PYG track and look to your right to take in the view down Llanberis Pass towards Llyn Peris and Llyn Padarn. It was about the only view open to us with the cloud hanging as low as it was. We were still sheltered from the wind here so it was reasonably warm – just base layer and fleece weather at this point.

The initial part of the walk from Pen-y-Pass is to a small col (Bwlch y Moch) at the foot of Crib Goch, following the PYG track across the face of a small ridge falling from Crib Goch all the way to Pen-y-Pass. It didn’t look too steep on the map, it looked like a reasonable walk-in. 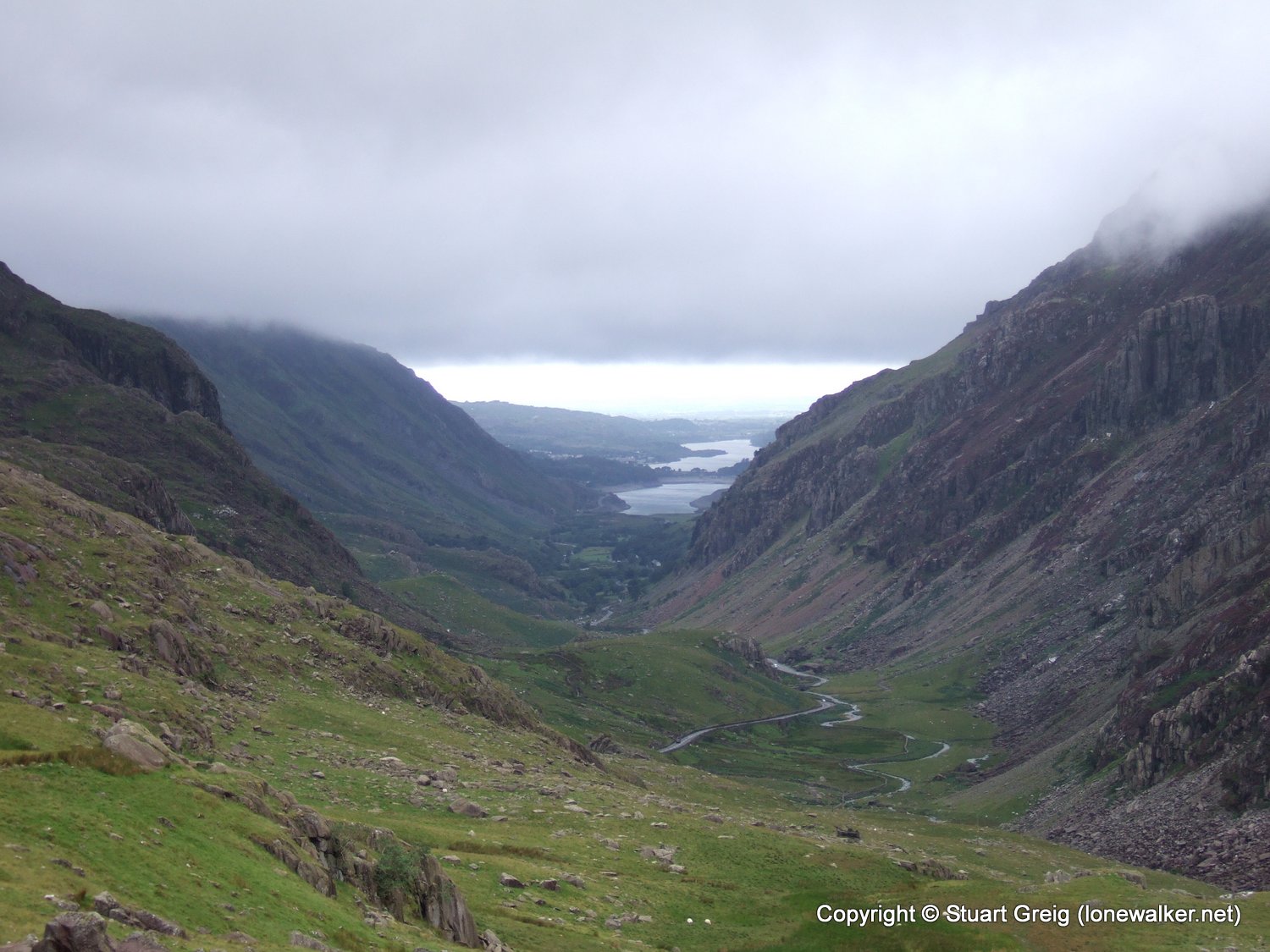 The path was fairly relentless in its climb up the side of the ridge and I was sweating nicely by the time we got about half way. It was a little too chilly to remove the fleece though. The clouds ahead swirled about in the wind and didn’t look like lifting for us. 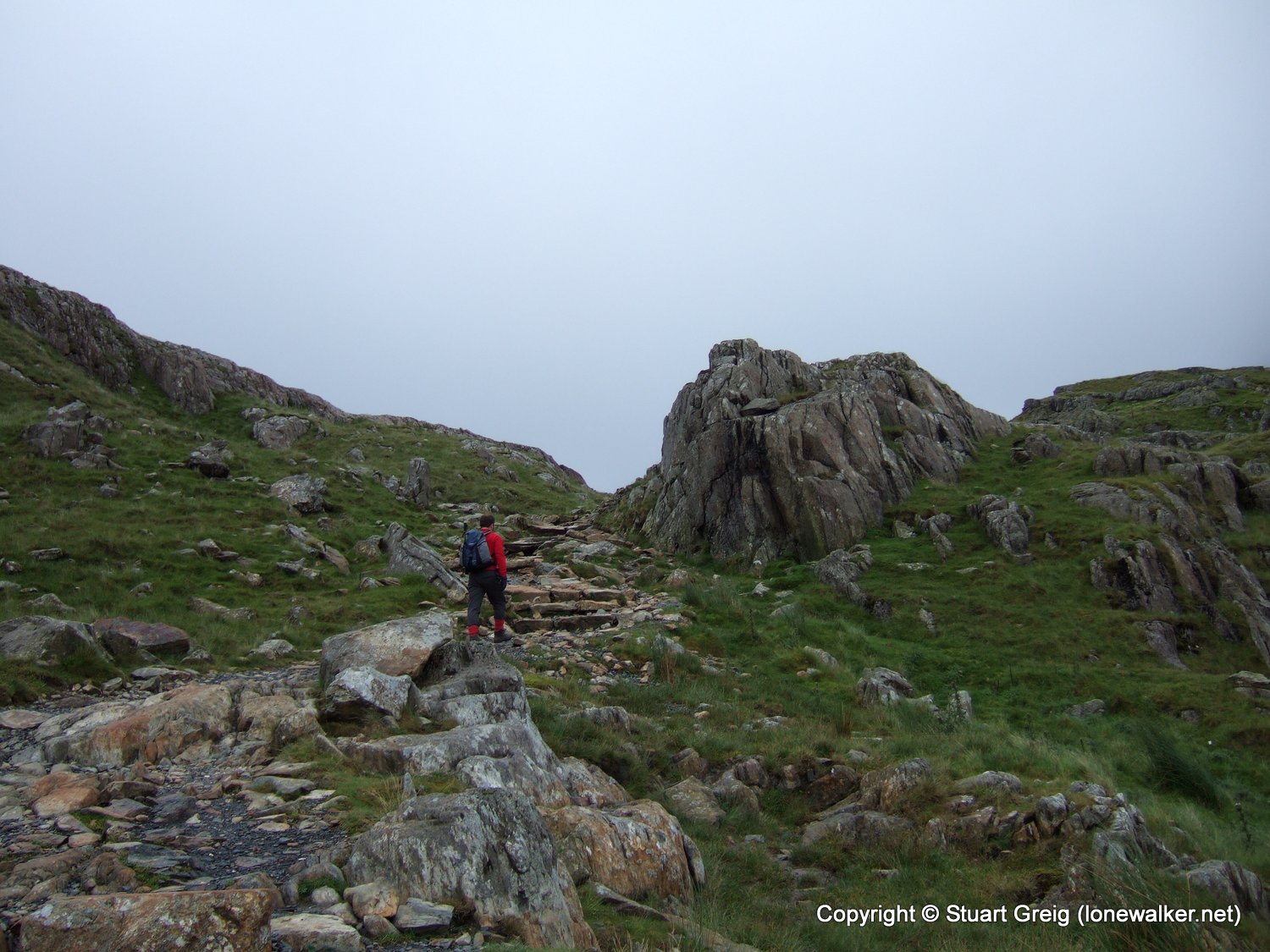 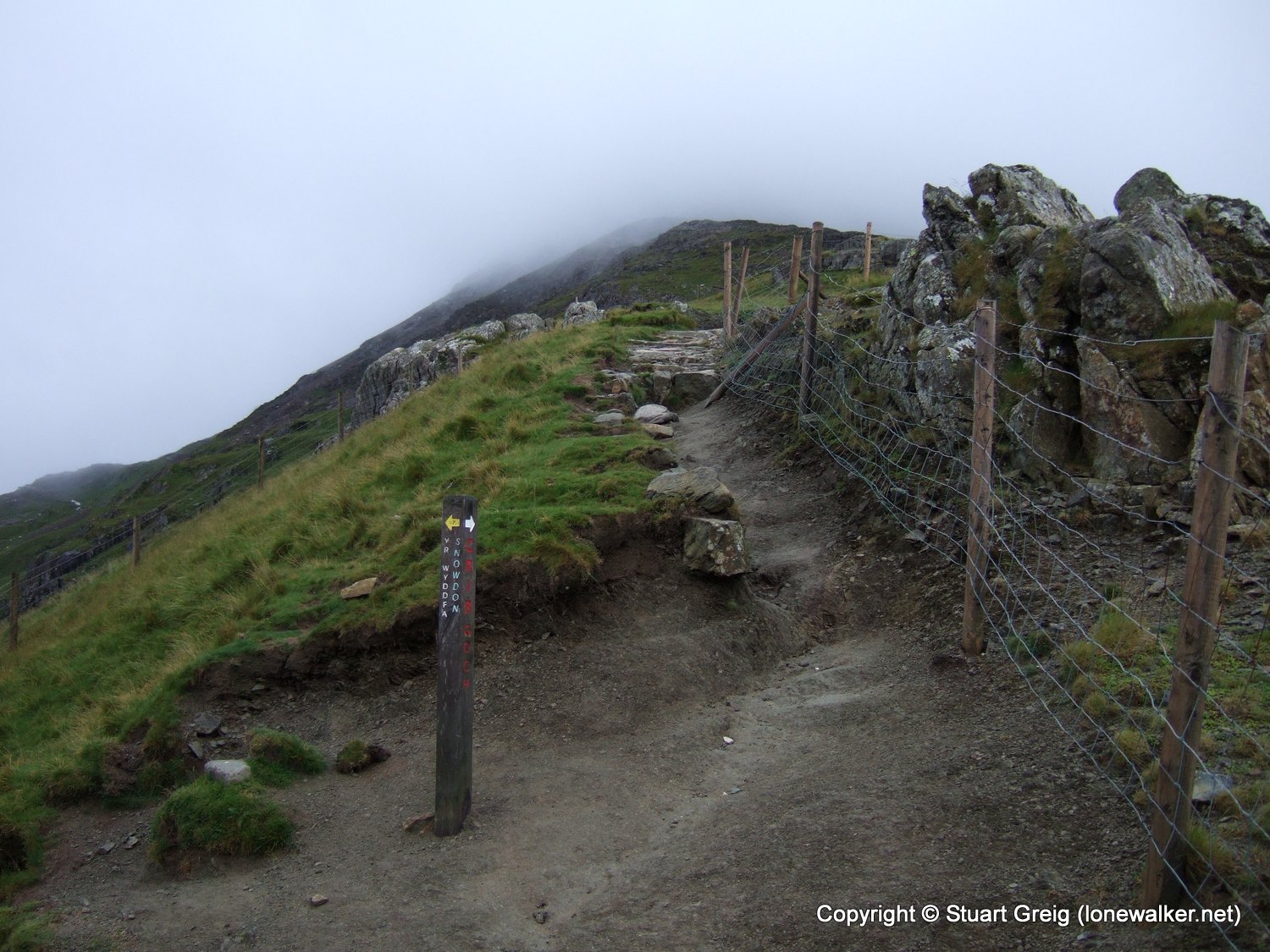 Bwlch y Moch and the path to Crib Goch

We had to make a decision as we reached Bwlch y Moch. Attempt the ridge line of Crib Goch, or take the lower route to the summit along the PYG track. I dug into my pocket and produced the anemometer I got for my birthday. At this position we were no longer sheltered by the bulk of the mountain and the wind felt ferocious, with strong gusts. My little screen showed a maximum wind speed of 35mph, with an average of about 28-30mph. The cloud was firmly gripping the mountain only a few hundred feet ahead along the path and with both these factors we decided it would be both pointless and possibly tricky to attempt Crib Goch.

I didn’t particularly want to do the ridge if we had to take a lower, safer track along it and combined with the fact that we would see nothing below our feet we both thought we’d leave it today and come back later in the year on a fine day and take advantage of the views offered along that route.

We could see and hear walkers ahead of us who had chosen the Crib Goch route, perhaps in the hope that the cloud would lift ahead of them (as it did for me last week), but that was a forlorn hope in our view. 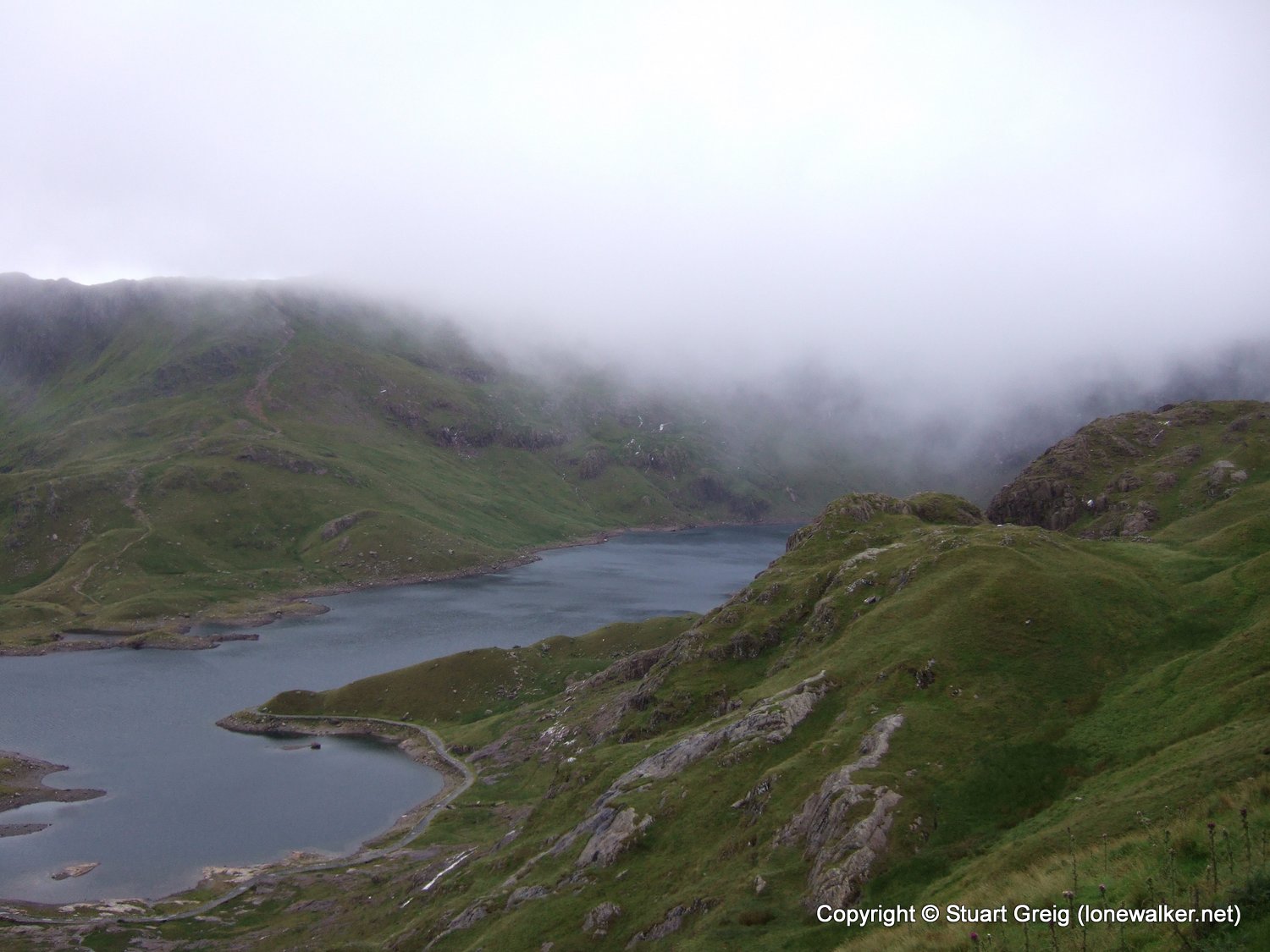 Llyn Llydaw and the path of the Miners’ Track skirting it 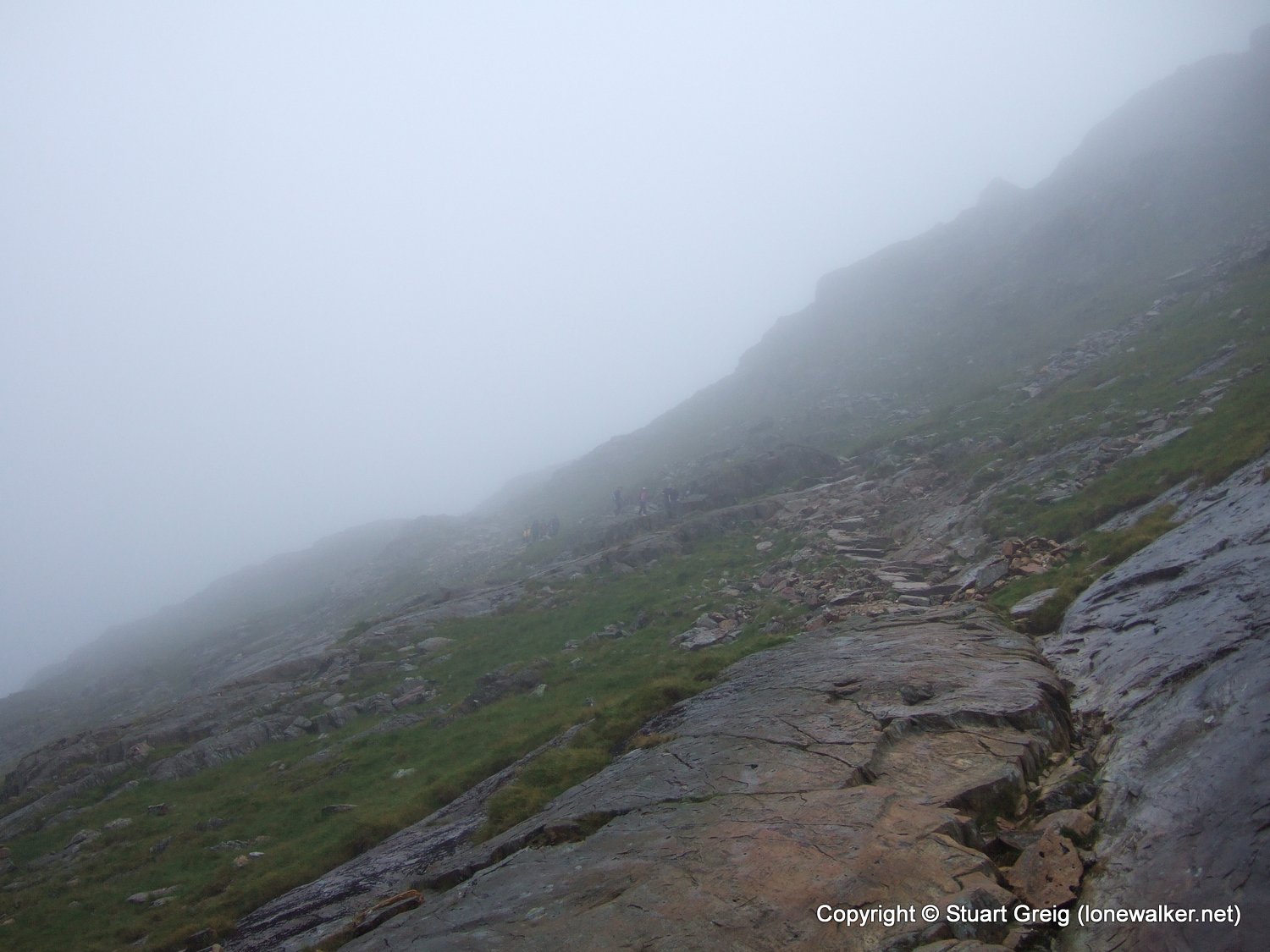 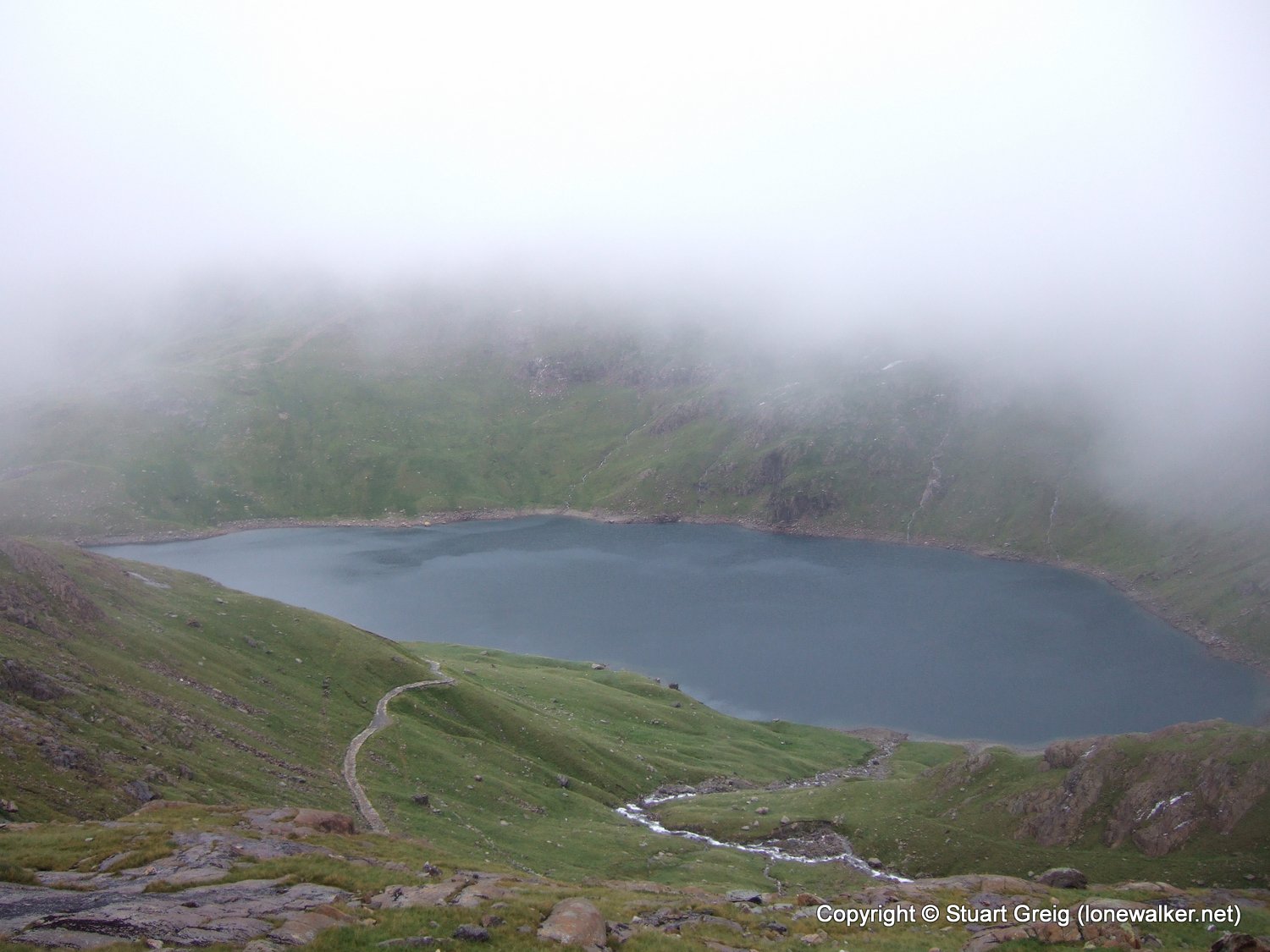 A final view of Llyn Llydaw before the cloud covered it

The track is well maintained with a well defined edge, made obvious by huge kerb stones and low walls in places. It climbed steadily now, rather than steeply and we made good progress along it. We met several groups of walkers coming in the opposite direction, from the summit and I thought this was a bit unusual. Normally I see no-one on the hills this early, except other early starters occasionally, but today we met loads of people who must have been up with the owls to get to the summit so early. 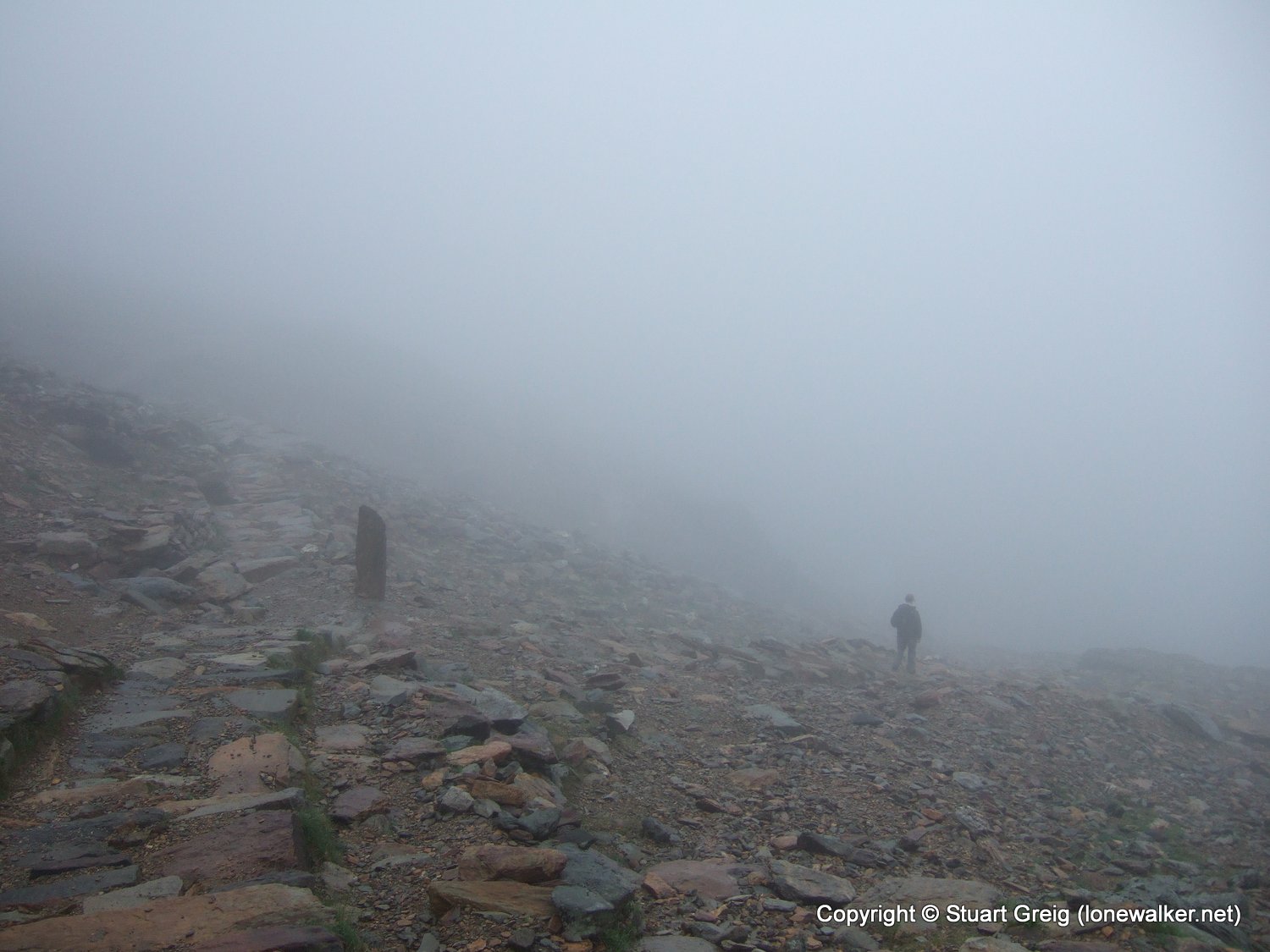 The junction for the Miners’ Track, off the PYG track (looking back down the path towards it), marked by standing stone. 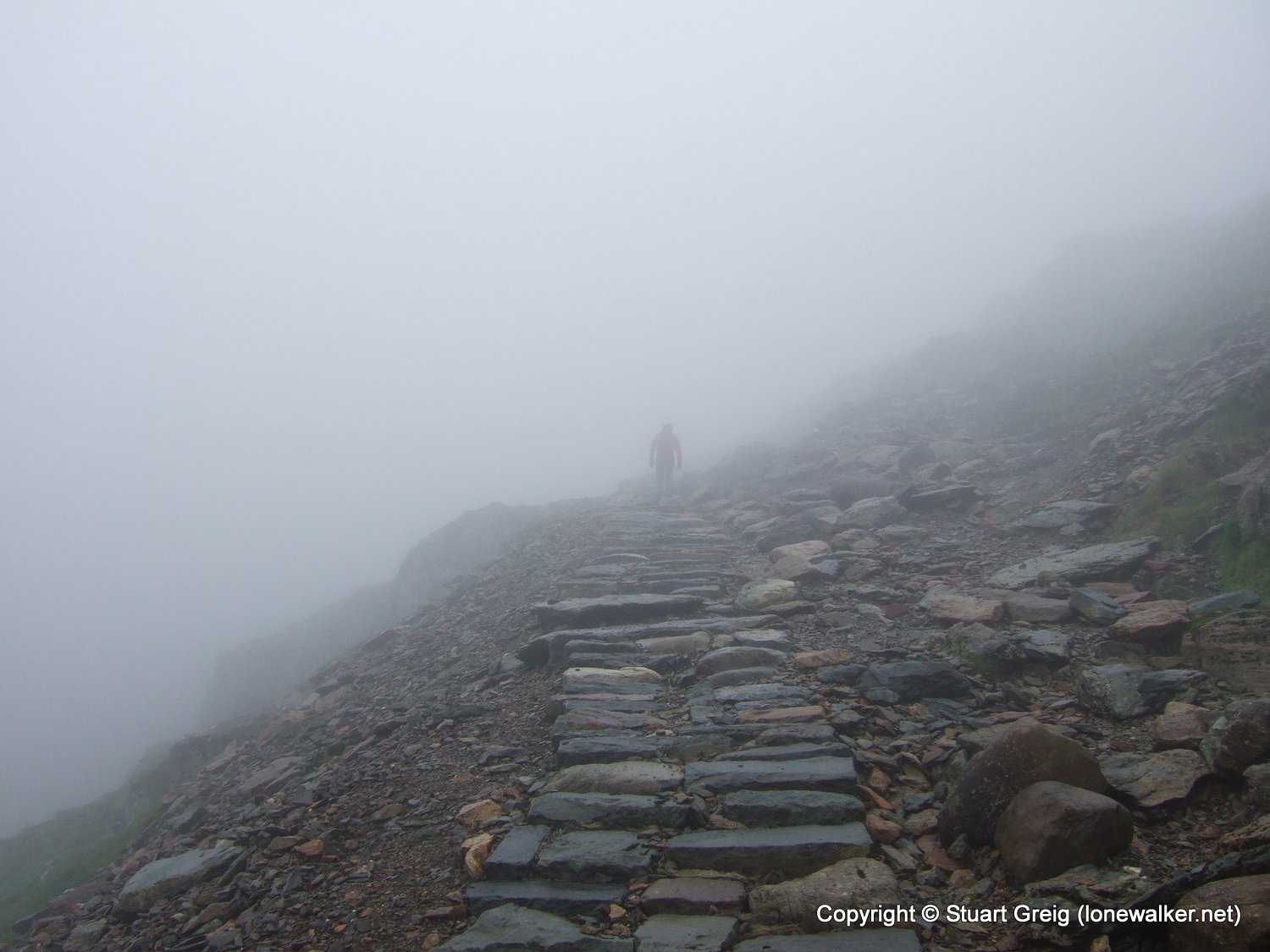 There are plenty of steps on the ascent. It’s no wonder people manage to reach the top in flip-flops

The fog or cloud carried voices a long way, but one group approaching us we could hear for about 10 minutes before they arrived. Lots of shouting and one voice loud and strident above the others. Then a large group of 10 or so appeared out of the gloom, being led by a loud man in an England rugby shirt. He was giving his fellows a blow-by-blow account of the path they were about to reach. “Tricky bit here!”, “large step down”, “loose stone here”. We waited at a narrowing of the path to le
t them all pass. He saw us and called out “Oh, not far to go now chaps”, as if we were on the other side of the valley, rather than 6 feet in front of him. What a knob!

One or two of the party gave us a “sorry about him” expression as they passed and we gave them all a “rather you than us” grin. 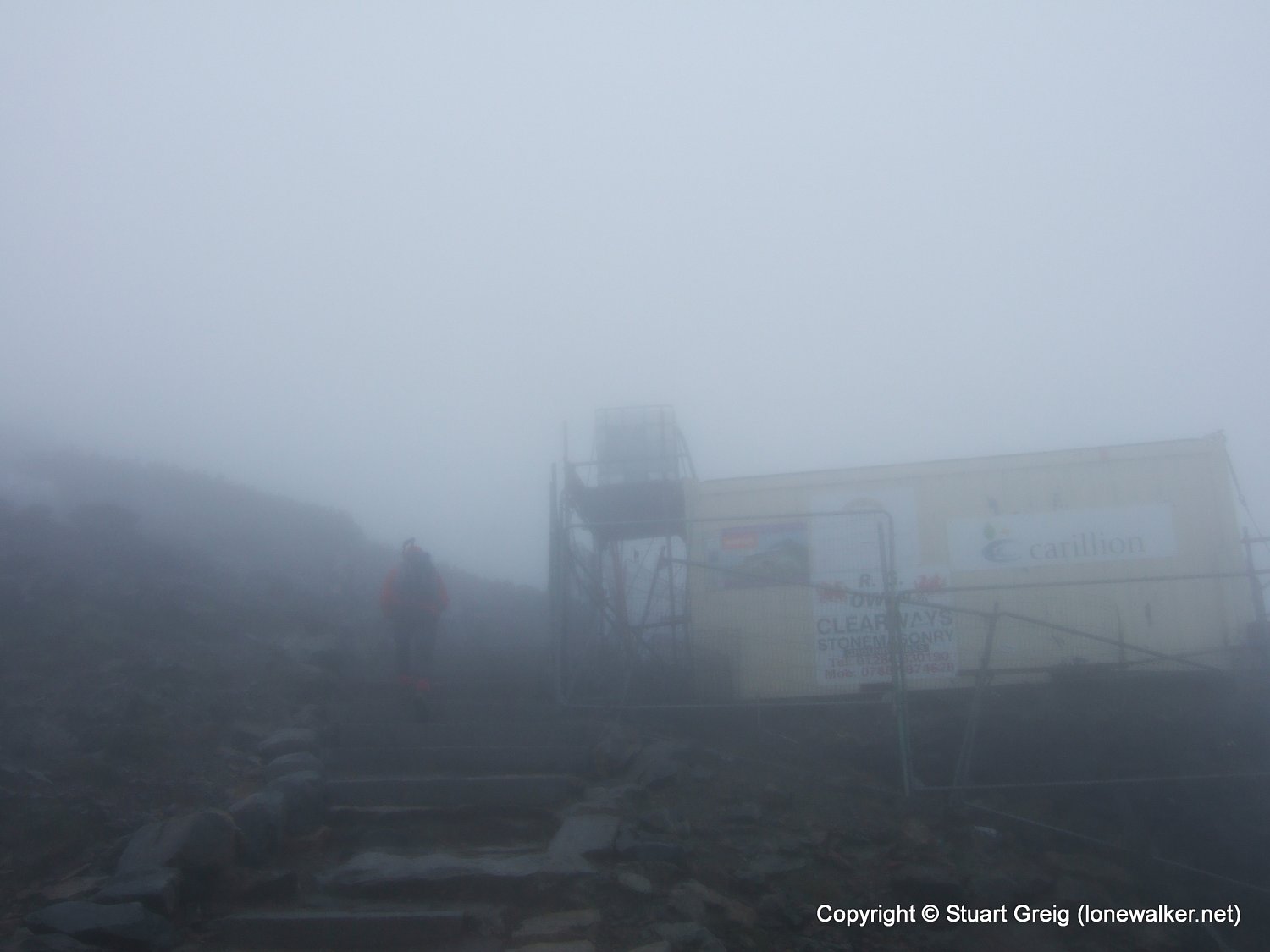 Building work on the summit

The cloud was extremely dense at the summit, with visibility down to about 10 yards I reckoned. We could make out some of the building work that was going on and we heard one or two engine noises from pumps or generators, but there was no-one around. There was plenty of building rubbish strewn all over the place though – how difficult could it be to keep all their rubbish in one place? 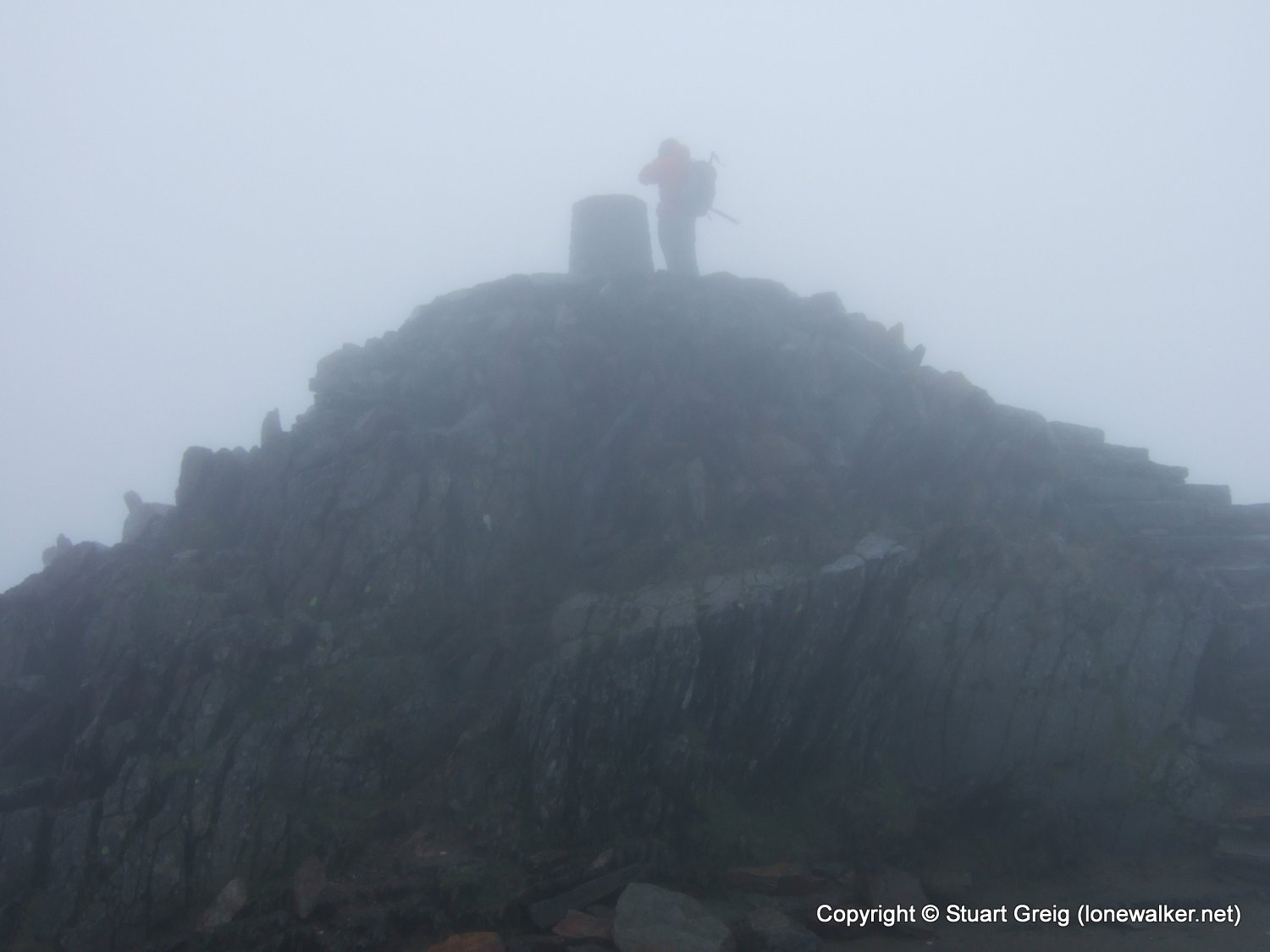 The summit cairn – completely free of visitors – except us. 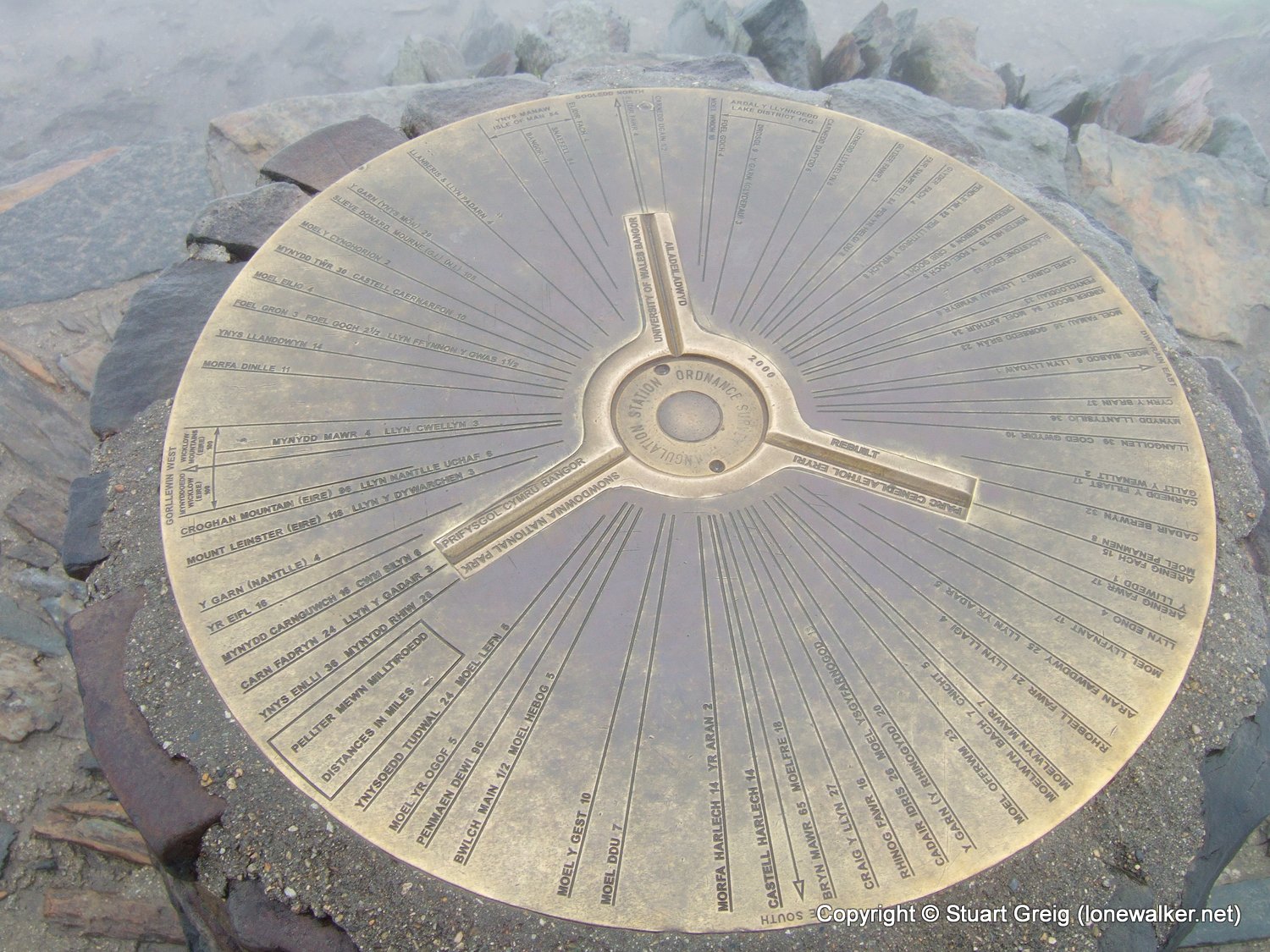 The plate on top of the trig point – very impressive.

We arrived at the trig point with no-one else around, no walkers, no workers, no-one. I was very surprised, especially as we’d seen so many people descending over the past hour or so. We took photos and enjoyed the view of the trig (we couldn’t see the bottom of the cairn on which it stands!). The wind speed on the summit was a rather disappointing 25-30 mph, not even as strong as before.

After a couple of minutes we heard loud voices approaching through the clouds, shortly followed by half a dozen guys. We vacated the cairn and found a sheltered spot to eat some sandwiches. Tex had grabbed some little cakes on his way out the door this morning and I had some sausage rolls that Chris had cooked for me the night before. A veritable feast!

We decided that as we’d not done Crib Goch we wouldn’t take the usual Horseshoe route back to Pen-y-Pass (over Y Lliwedd), instead we’d return along the path we’d just used and then return via the Miners’ Track to the car park. Leaving the Horseshoe route for the next time we visited. Besides, the visibility was so poor, there was no guarantee we’d find the narrow little track that leaves the summit for Y Lliwedd. 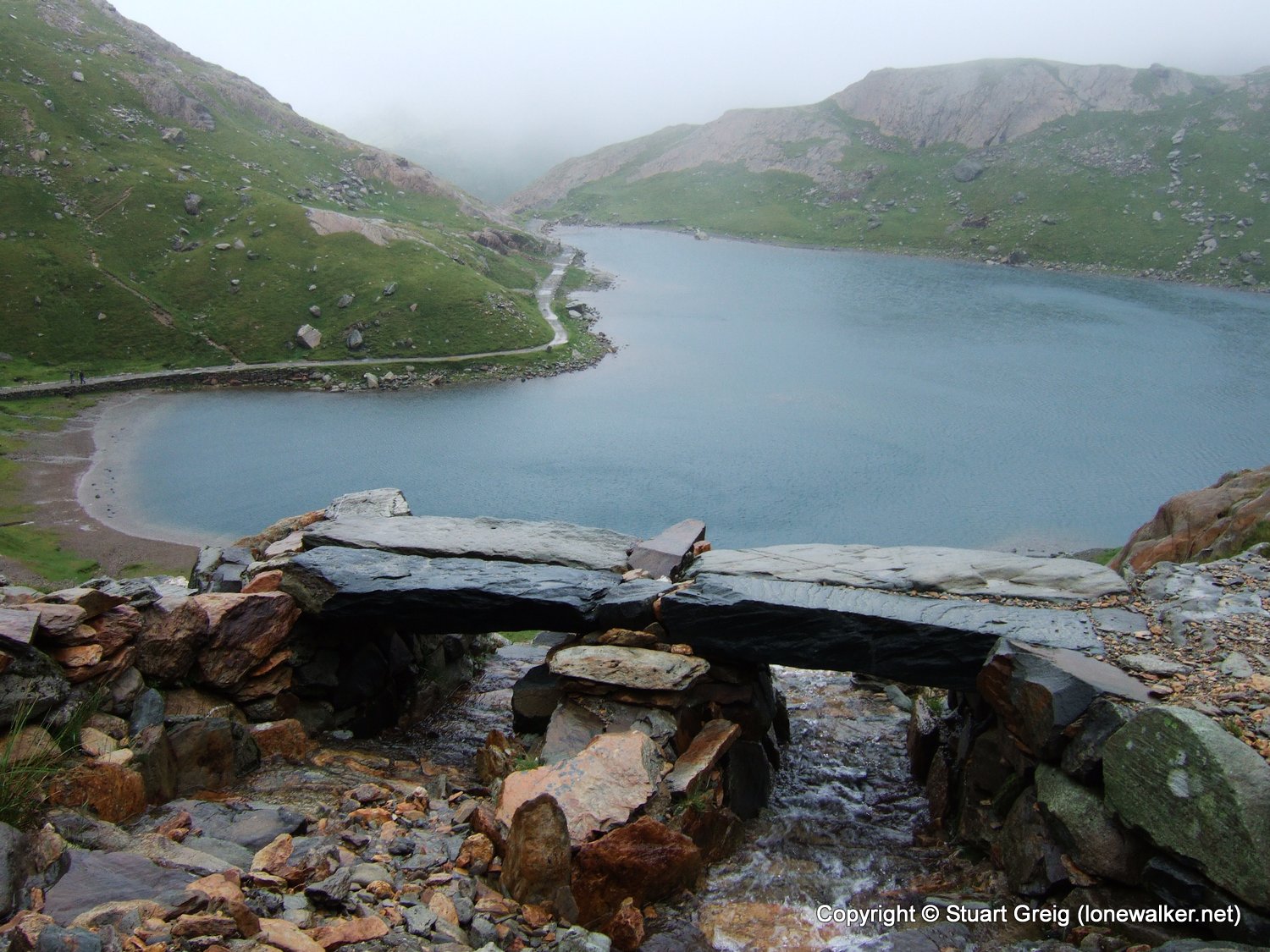 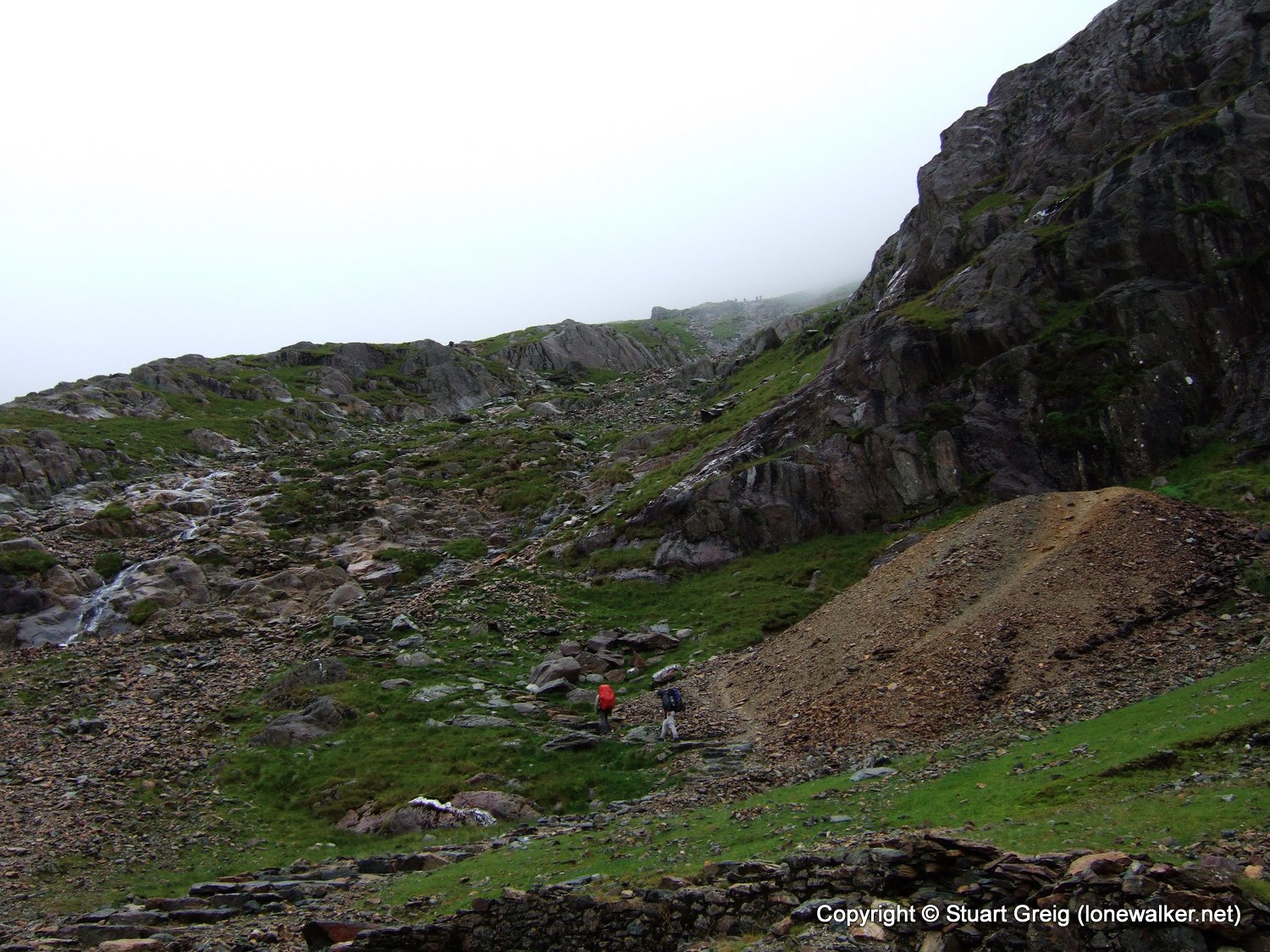 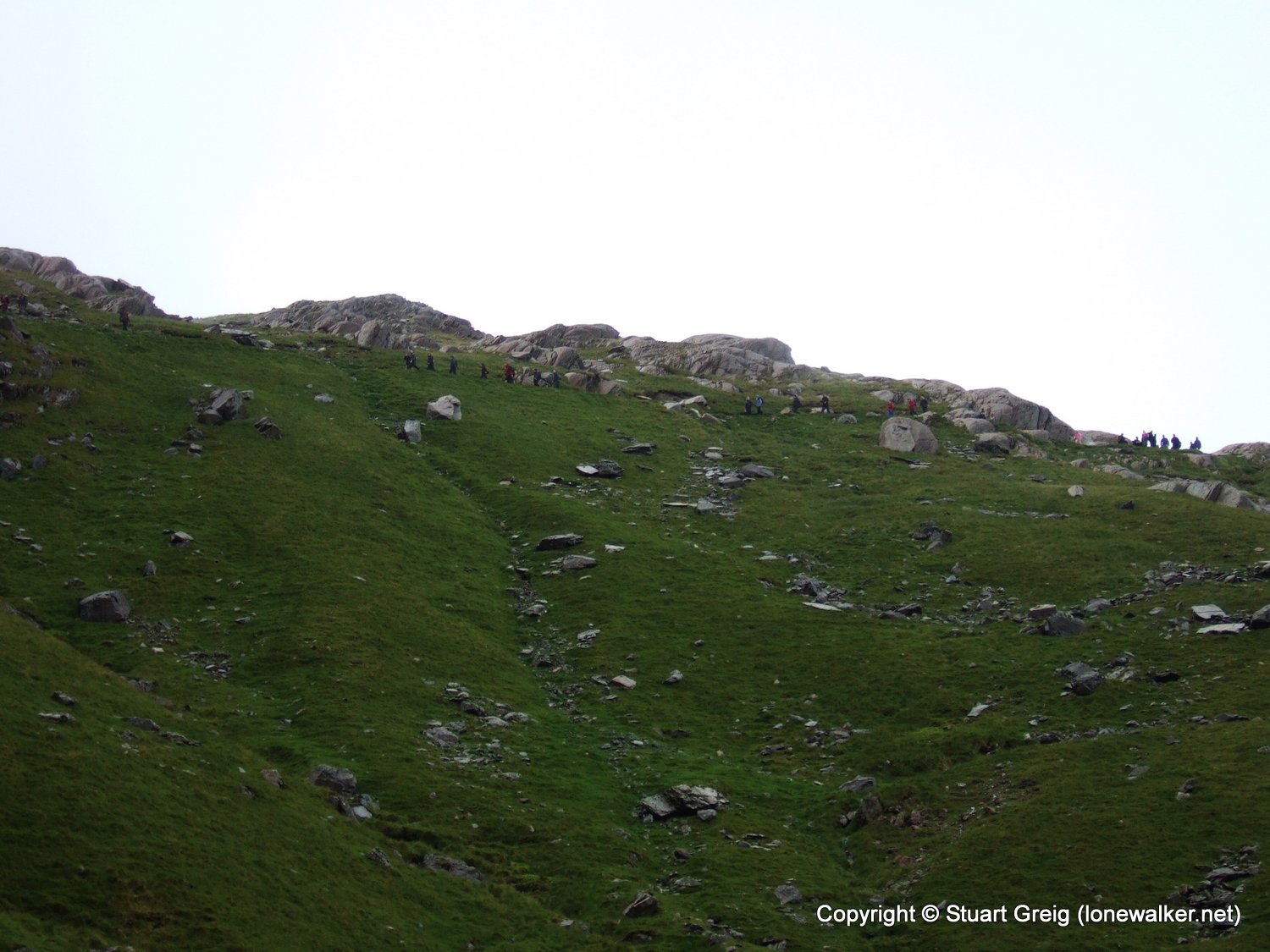 Walkers on the PYG track above. Excuse me, coming through, excuse me……. 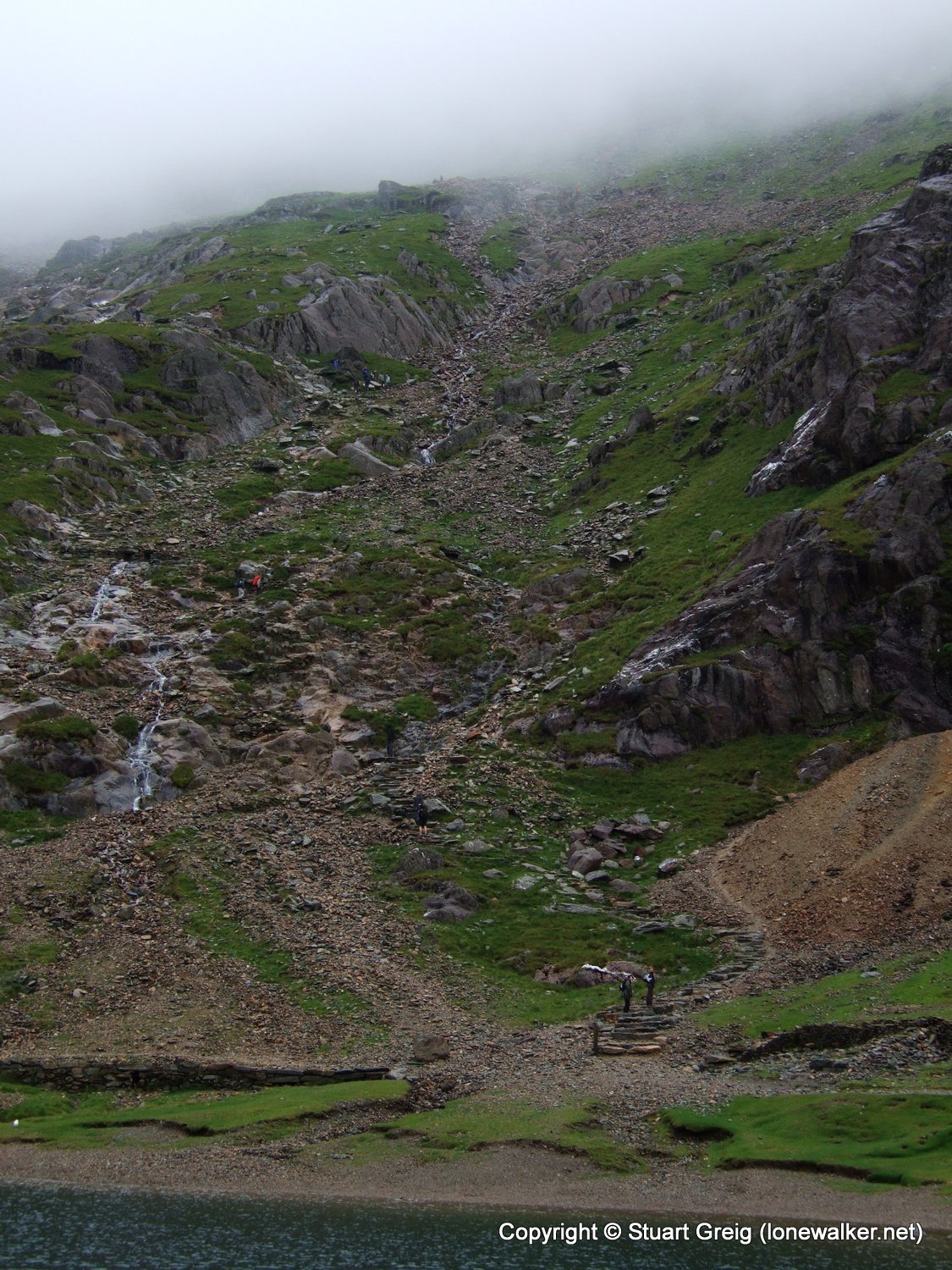 The Miners’ Track from Glaslyn 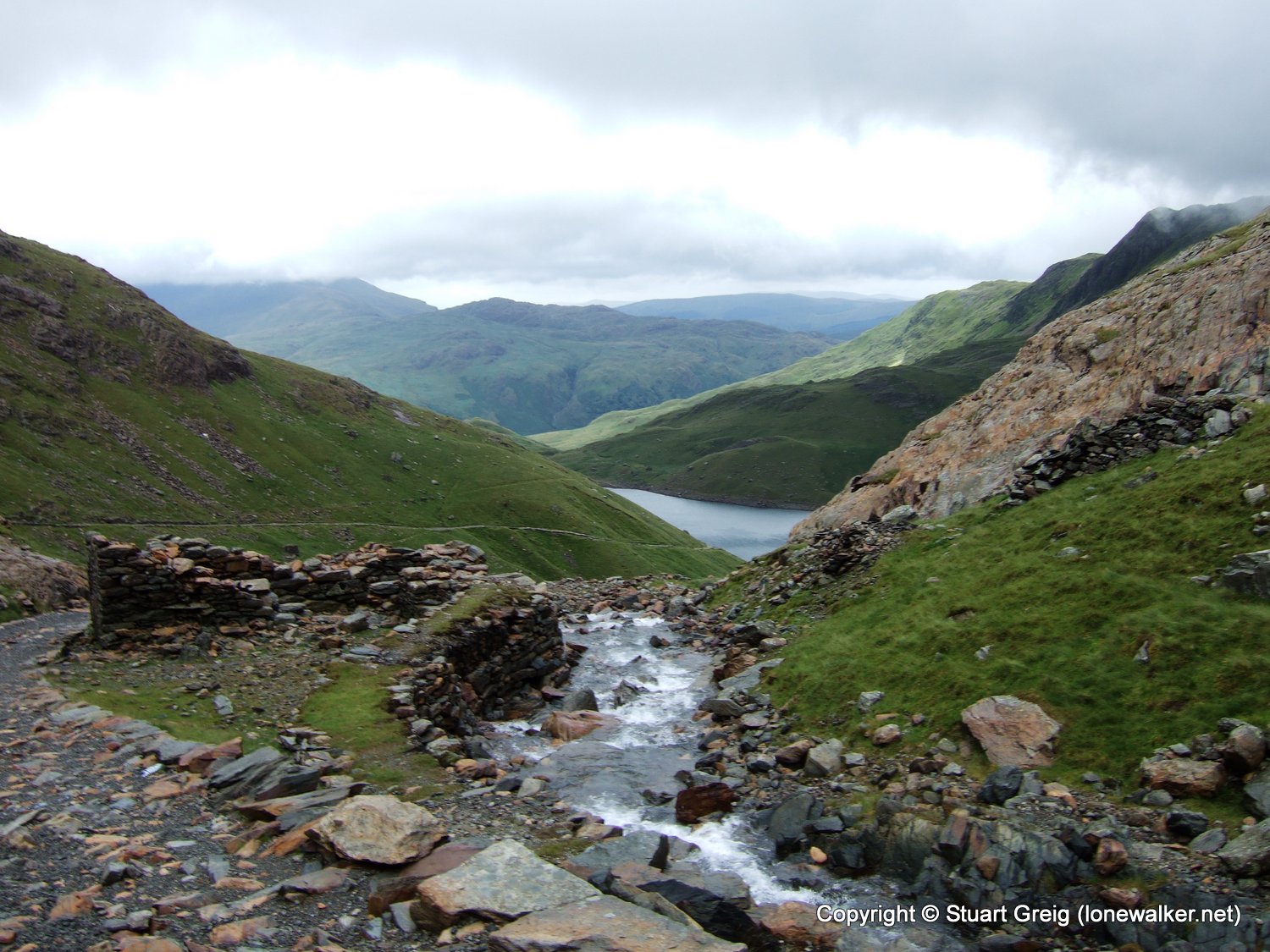 I was so glad we decided to return along the Miners’ Track. The scenery was utterly fantastic. Even with the cloud down and no views of Snowdon, the basin that cradles Glaslyn is a glorious place, with towering sides and an ancient quality to the air. 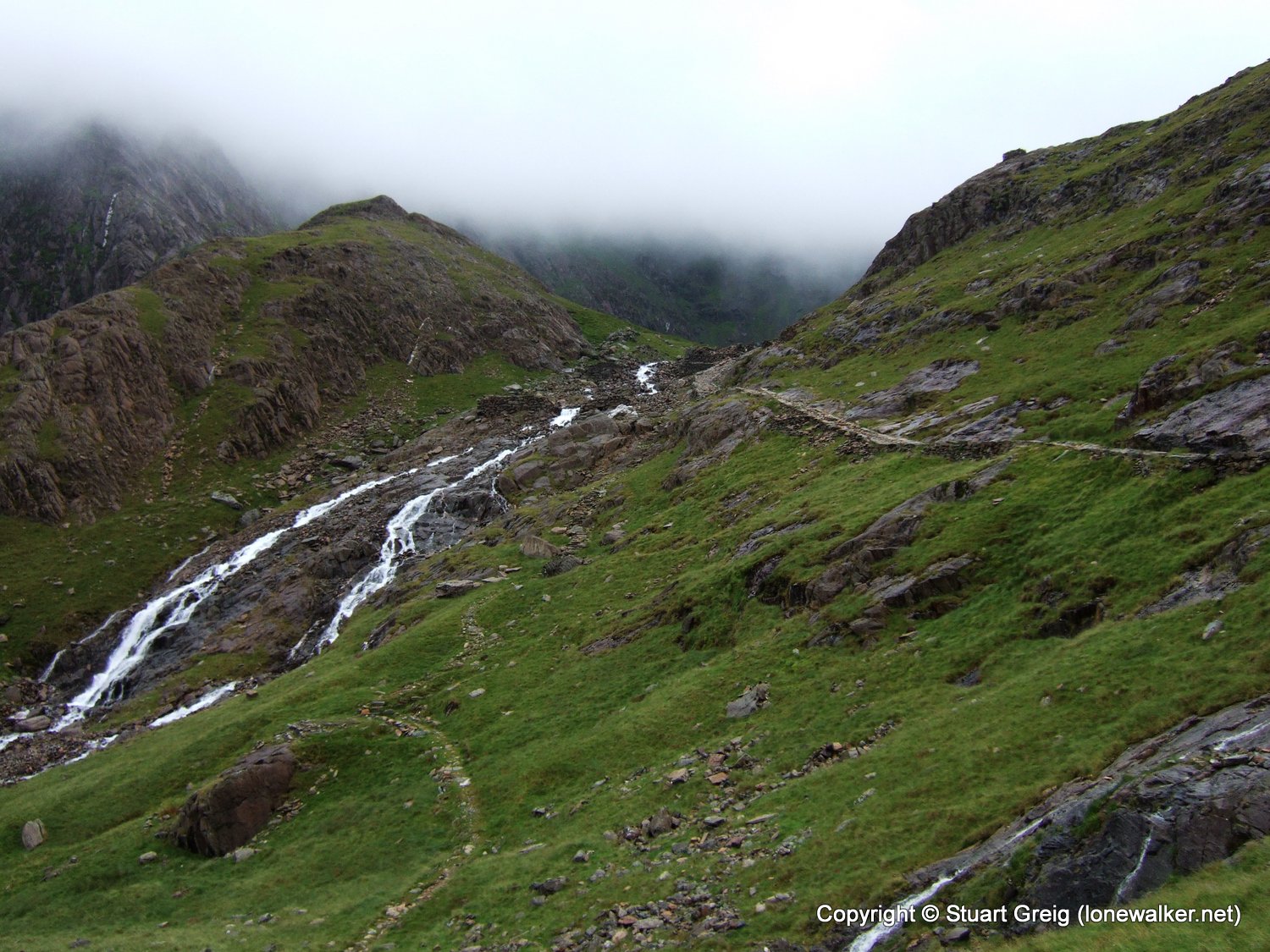 The Miners’ Track, dropping down from Glaslyn to Llyn Llydaw 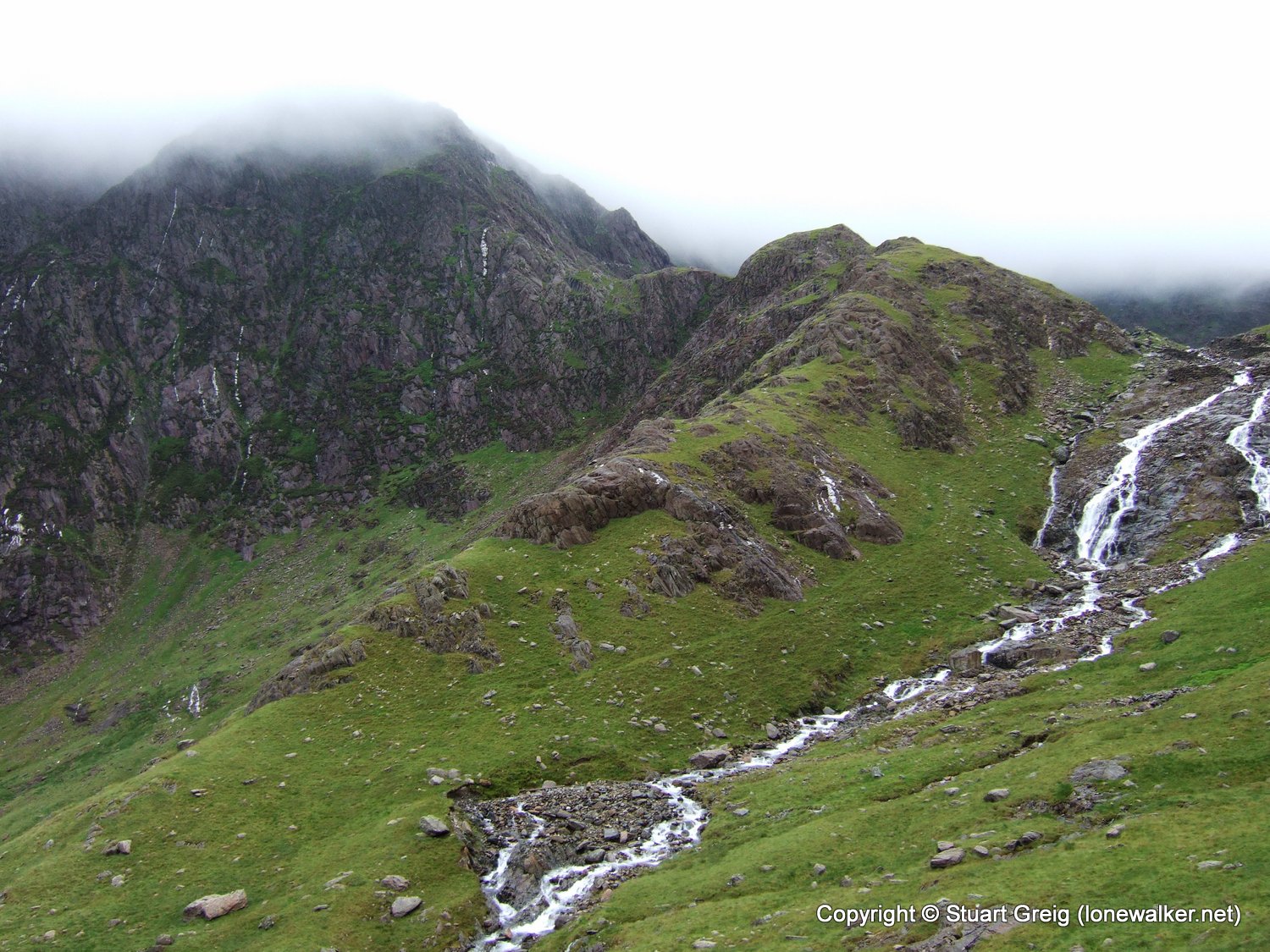 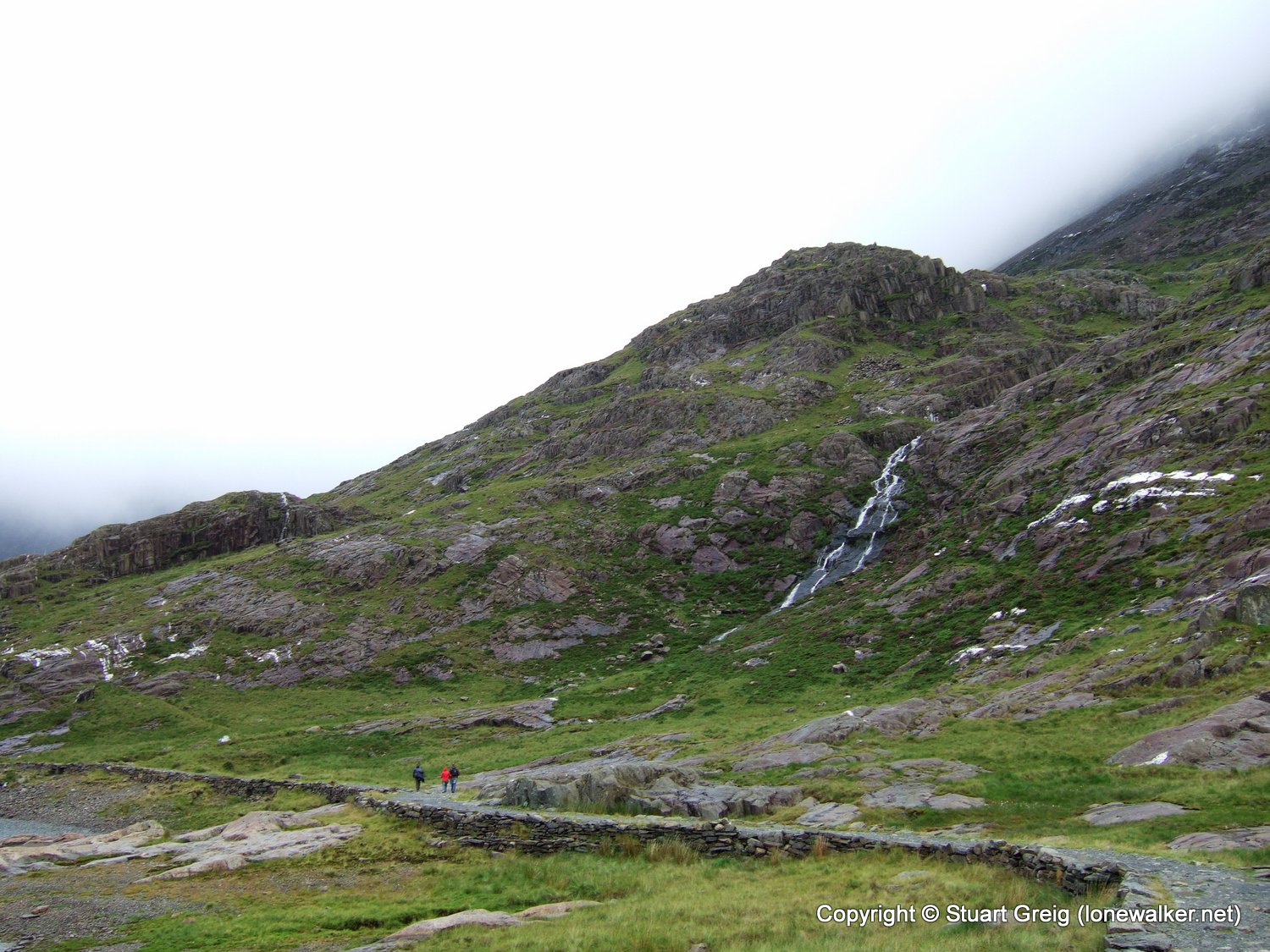 Looking back along the Miners’ Track 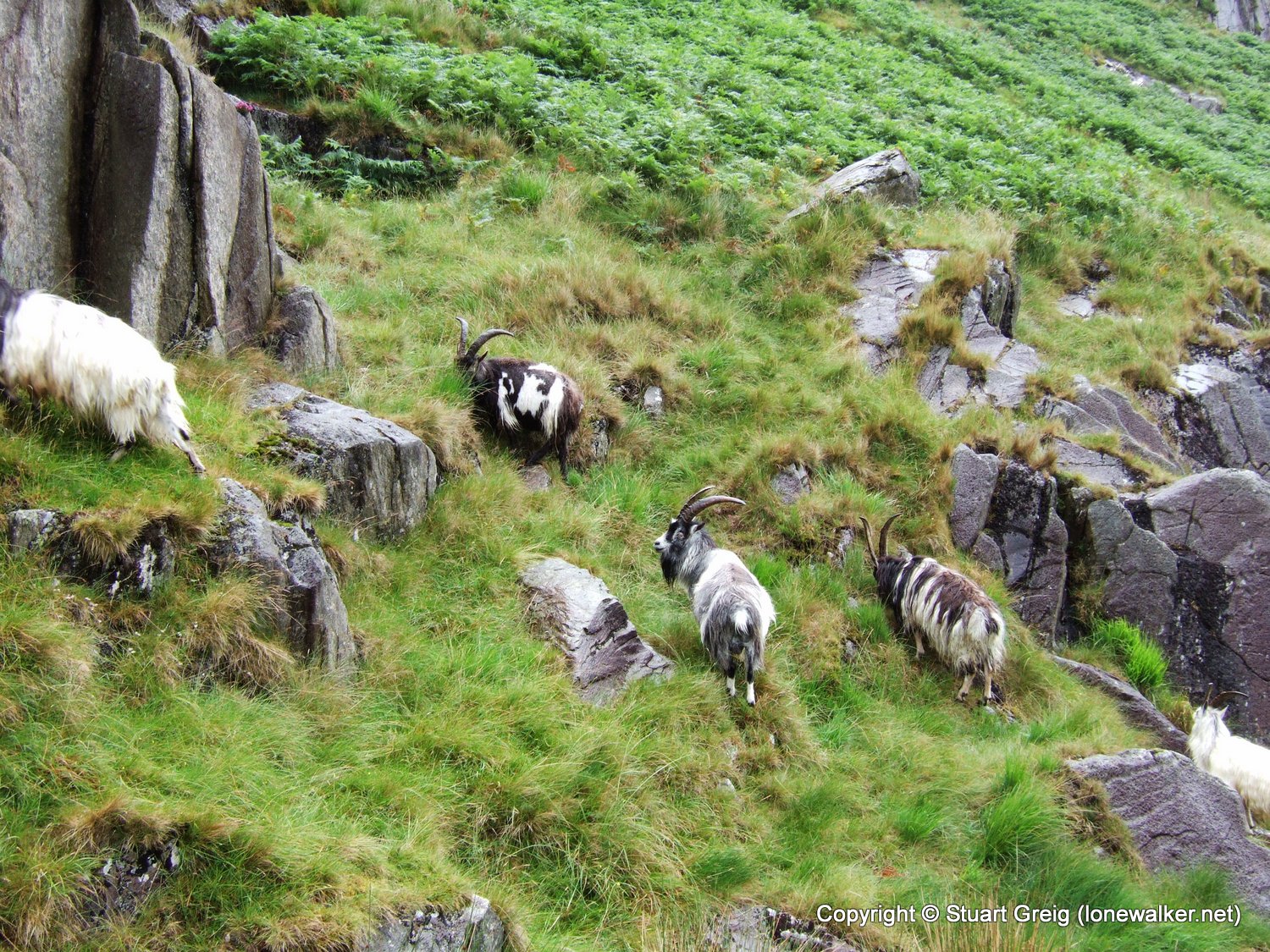 Feral goats on the path beside the Miners’ Track 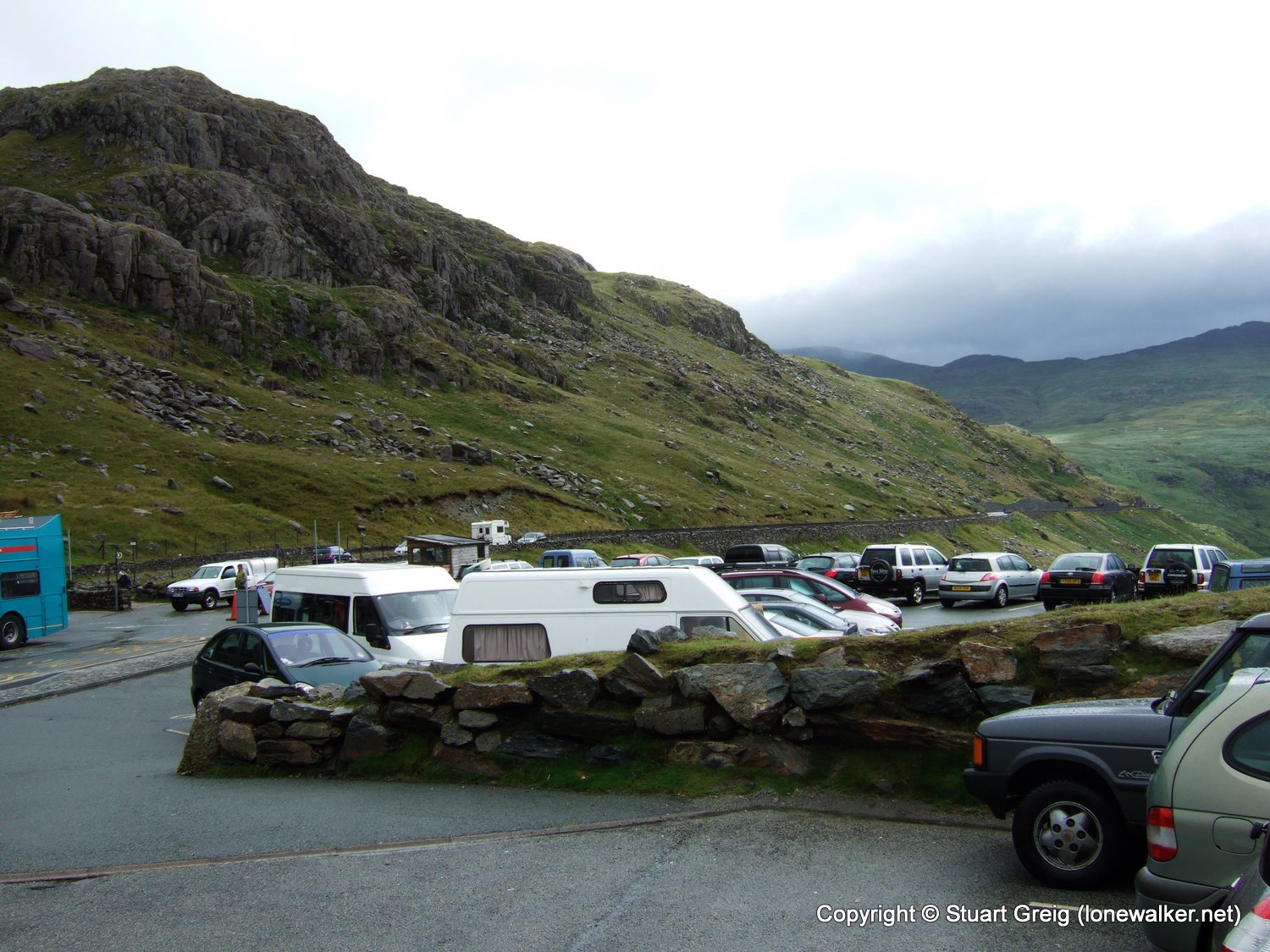 Back at the car – the car park is now full and they’ve closed the barrier.

On arrival I was expecting a glum and dull walk up to the summit and for much of it that was the case. I wasn’t expecting the breathtaking scenery in the valley though. The Miners’ Track is a peach of a track to walk along and I spent much of the day turning around and getting 360 degree views of the environment.

Snowdon is a walk for all weathers. You just need to pick the right bit of it depending on the day.