The dreadful weather predicted for the Lakes and the memory of last weeks blind slog through the mist over Ill Bell prompted a change in walking location this weekend. I chose a walk in the Peak District recommended to me by Journeyman just before Christmas. Although at the time it would have been quite boggy and wet, I was hoping that the dry and sunny spring weather would provide somewhat friendlier conditions underfoot.

The plan was to park near the Longshaw estate, just to the southwest of Sheffield, cut across Totley Moor to Flask Edge, up to White Edge, across Bar Brook to Birchen Edge then back across the brook to Curbar Edge and Froggatt Edge. More edges than a thruppeny bit.

This is the furthest east I have ever walked in the Peaks and it was also the longest walk of the year at just under 15 miles. The altitude gain was much less than the previous few weeks as you’d expect, but this was deliberate in an attempt to avoid a complete white-out if the weather turned foul again. The walk also includes a possible four trig points, one of which I wasn’t at all sure I’d find.

I arrived at my chosen lay-by on the A625, selected with the use of the aerial mapping facility on maps.live.com, at 7:30 and cut through the Longshaw estate and its pay and display car parks to pick up the path across Totley Moor. This passes one of the air vents on the Totley Tunnel, a 3.5 mile long railway tunnel between Grindleford and Totley Brook. The ridge of Flask Edge is visible for most of the way acoss Totley Moor and the trig point has a fine view across to Sheffield and Chesterfield, although it was a little misty today. Wading through the heather to and from the trig point soaked my feet, still wearing the trail shoes, and set me up for an uncomfortable day in wet socks. 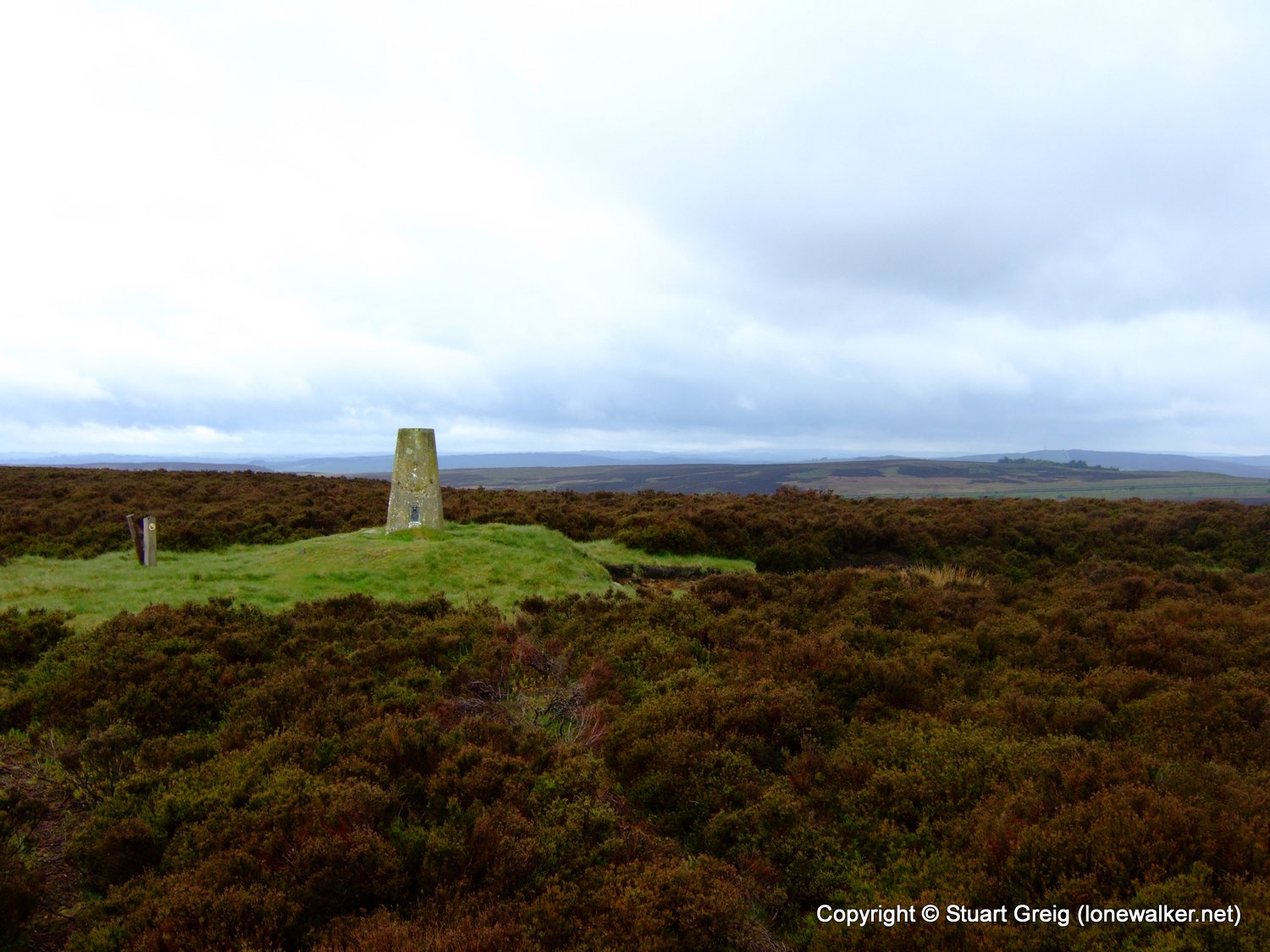 I followed an indistinct path across Flask Edge to the B6054 and my second trig point of the day, this is the one I was half expecting not to be able to find. The trig point at Barbrook Bridge is not the traditional pillar, but a surface bolt. A metal bolt set in concrete and located at ground level. As they are so close to the ground they often become overgrown and are notoriously difficult to find. I was in luck however, because some kind soul had excavated the concrete base, removing the surrounding soil and making for an easy find. Thanks John! 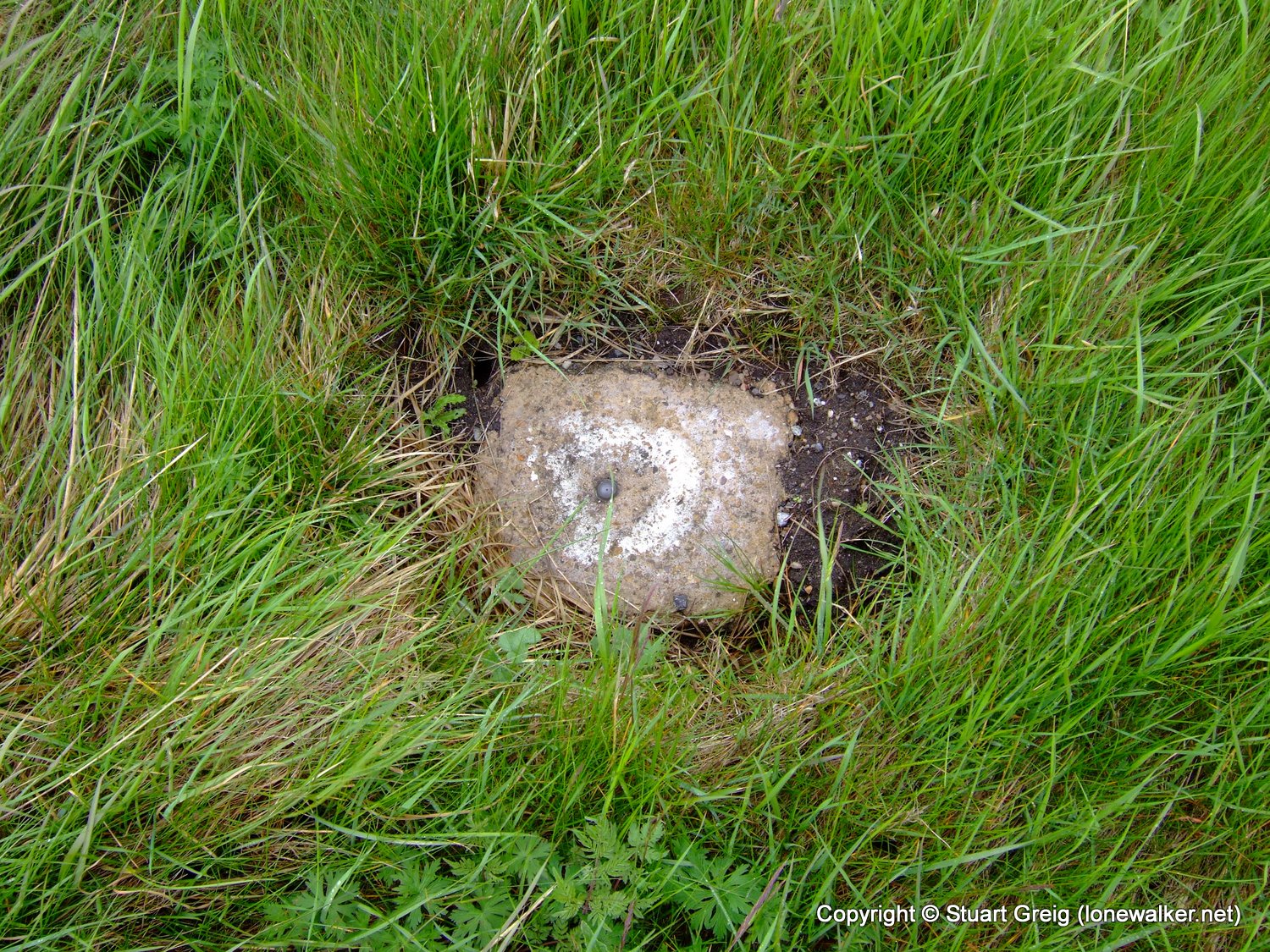 Crossing the road I picked my way through the heather past Lady’s Cross up to White Edge and a splendid view down the valley towards Edale. I could pick out the Mam Tor ridge, Lose Hill and Winhill Pike, almost 10 miles away as the crow flies and the big lump of Kinder Scout beyond. 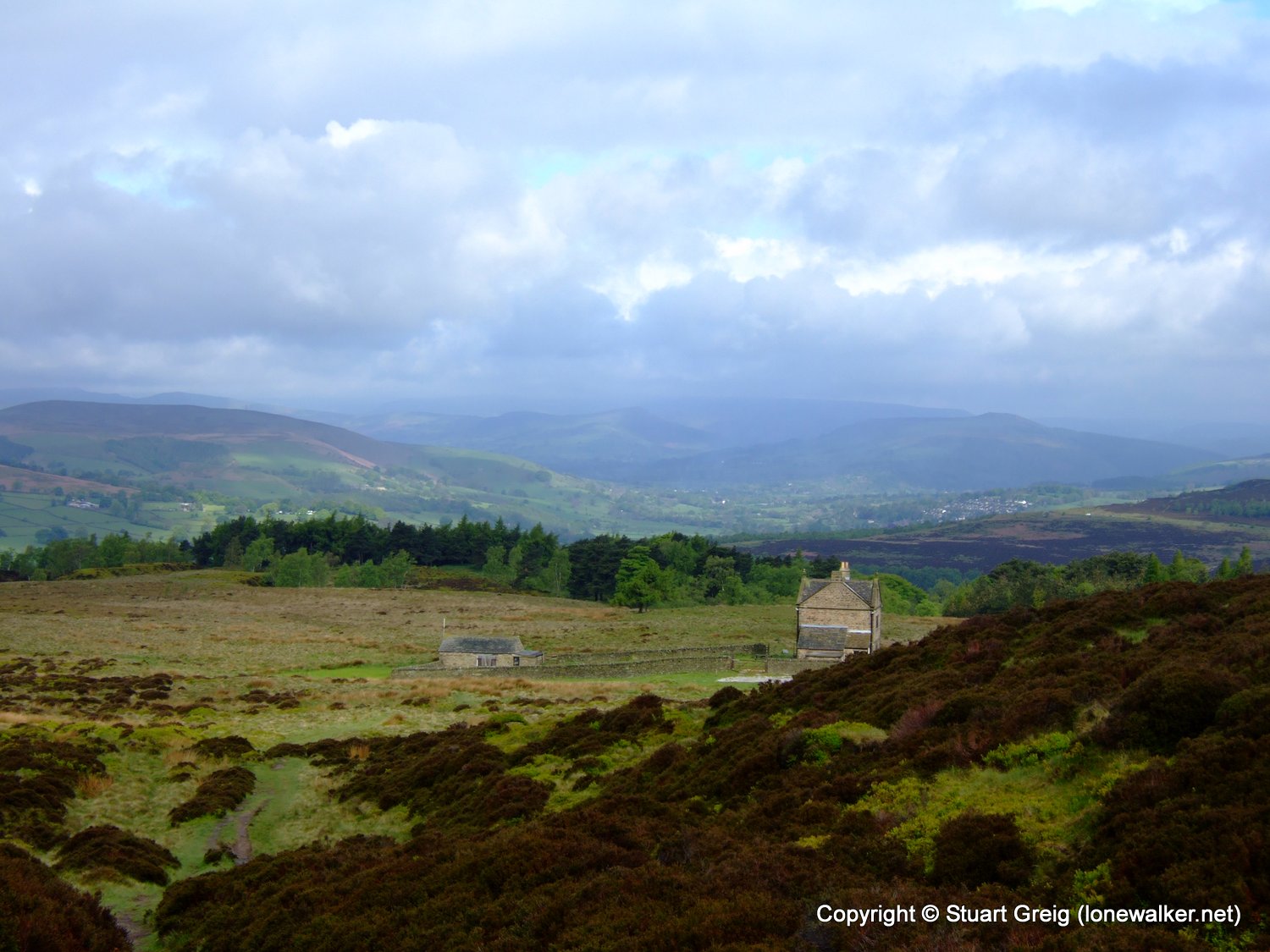 The view from White Edge

White Edge isn’t a true Peak District edge in the way that Burbage and Stanage are, its more of a steep slope, but its picturesque none the less and inhabited by at least one herd of large deer (Red Deer I think, but I’m no David Attenborough). As I rounded one corner I startled one of these grazing on the path in front of me, no more than 10 yards ahead. I obviously frightened the life out of it because it jumped a few feet in the air and bounded over the “edge” to join the rest of its mates at the bottom of the slope. Its these sorts of sights you won’t see at midday, when 250 people have already bimbled along this path, its the early birds that get these sorts of treats. Having said that, we also get the face full of gossamer and cobwebs that greet the first person down a narrow wooded trail in the morning – ho hum, swings and roundabouts eh? 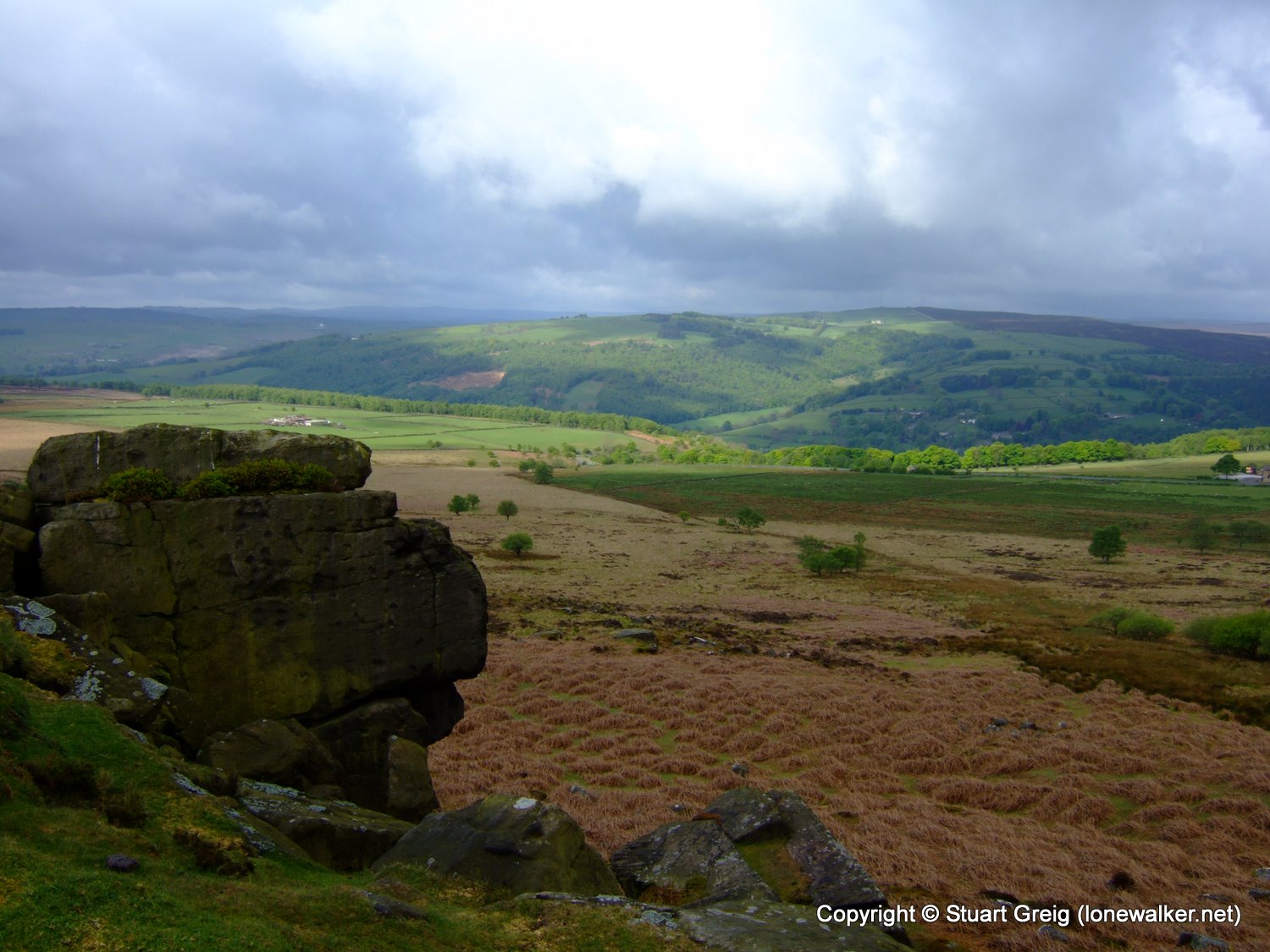 The trig point on White Edge soon came into view, shortly after passing the first walker of the day coming in the other direction – no startled deer on the path for him 🙂 – and shortly afetr that I was picking my way down a grassy bank towards Bar Brook, a charming little river at the intersection of two roads. I followed the minor road heading southeast, not realising that I needed to use the gate at the crossroads. I spent the next mile looking for somewhere to cross a very rickity looking dry stone wall, that certainly wasn;t going to stand my weight. I eventually came to a gate with a discouraging sign (that I ignored), that led across heather covered moorland to Birchen Edge and the stone outcrops known as the Three Ships. 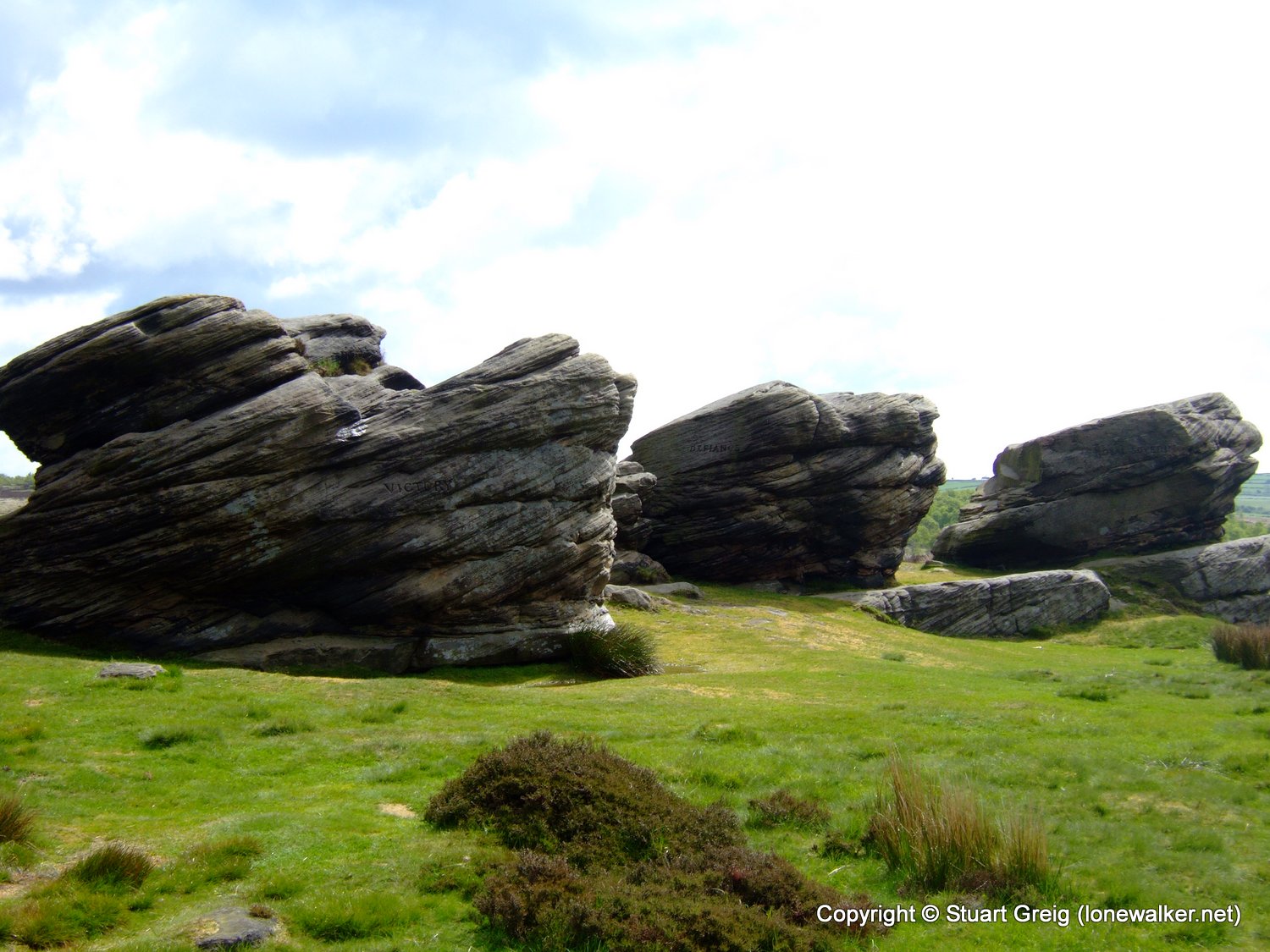 These have been engraved with the names of three famous ships from the Battle of Trafalgar; Victory, Defiant and Royal Sovereign and stand guard over Nelson’s Monument, erected in 1810 to commemerate his death at that battle. He was a bit of a lad at home Nelson, with a complicated personal life, but sealed his hero-status and immortality by dying at his finest hour.

Birchen Edge is much more the traditional Peak District Edge, complete with its own trig point, the final one of the day, right next to the path that leads down through the rocks and across the fields back to the crossroads. 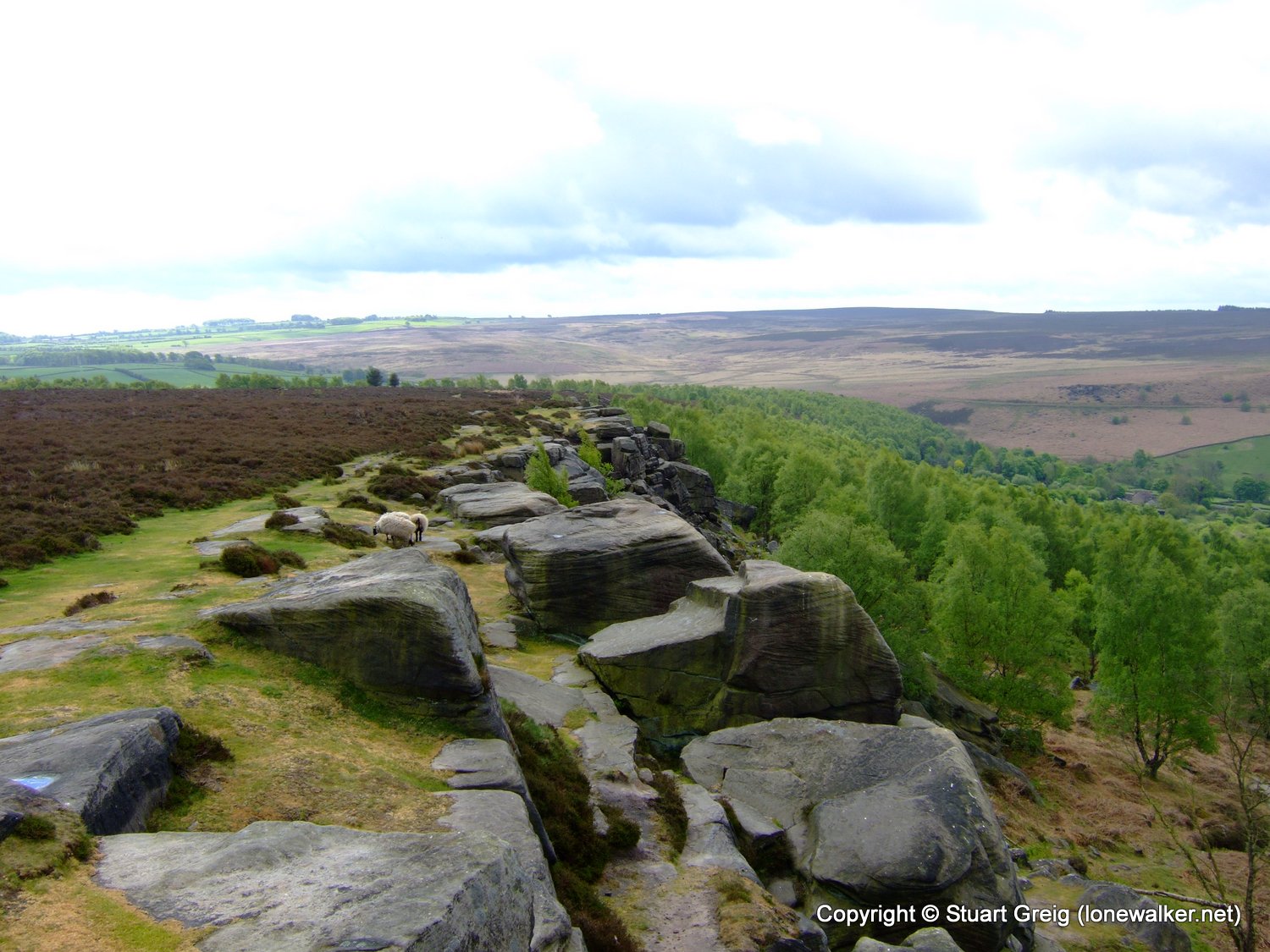 I then followed the path up to Wellington’s Monument, not as well preserved as Nelson’s, but slightly larger. As monuments go, Wellington doesn’t do anything like as well as Nelson, despite having a much more profound effect on Britain and Europe than Nelson ever did. His failin
g of course was to survive Waterloo and go on to a splendid career in politics!

As I approached Curbar Edge I could see a rain bank behind me, dropping a large amount of water in the valley. With the wind at my back I had a chance to put some distance between me and it and I stepped up the pace all along Curbar Edge and onto Froggatt Edge. There were lots more people out now and apart from the rain band behind me, the weather was fine, clear and warm.

With about 5 minutes to the car the rain finally caught up with me and I donned my waterproof jacket to see me back to the car. I pity the poor people who had just started out, because this rain front was not going to soon pass. I got back to the car exactly 4 hours after setting out and not a minute too soon! I had a splendid day back in the Peaks, the scenery was different, but none the less enjoyable for that.