Pete was free this weekend, so we decided to strike out, despite the dire weather predictions and see if we could find somewhere that wouldn’t result in us having to be rescued either by helicopter or boat. The North West was likely to be a complete wash-out with heavy rain and high winds predicted for most of my usual walking areas; the Lakes, the Dales and the Pennines. So we selected a route from Llangollen that appeared to be a small cloud-free oasis when seen from the BBC satellite weather forecast.

As it turned out we were extremely lucky; if we’d decided to head to the Lakes and take a chance on the weather, which I was tempted to do, we could have been in some serious trouble. The Original Mountain Marathon event, that runs in the Lakes every year, was abandoned due to the weather.

we arrived in Llangollen just before 08:00 and found a much more crowded car park than I had expected, it seemed like some sort of canoeing event was being held in the town and there were all sorts of folk wandering around with boats on their shoulders and under their arms; strapped to the tops of cars and left by the side of the road. Bloody expensive things too! There was one ratty old boat with a For Sale notice on it; for £700!!

We left he hustle and bustle of the town and were soon sweating our way up to the ancient hill fort at Castell Dinas Bran – well I was sweating – Pete was waiting patiently for me to catch up. I reminisced about the day I walked almost all the way to the top of Ben Nevis without stopping – only 5 months previously – it’s amazing how quickly you can lose your fitness levels – especially when you live on chips and pies and beer for those 5 months 🙂 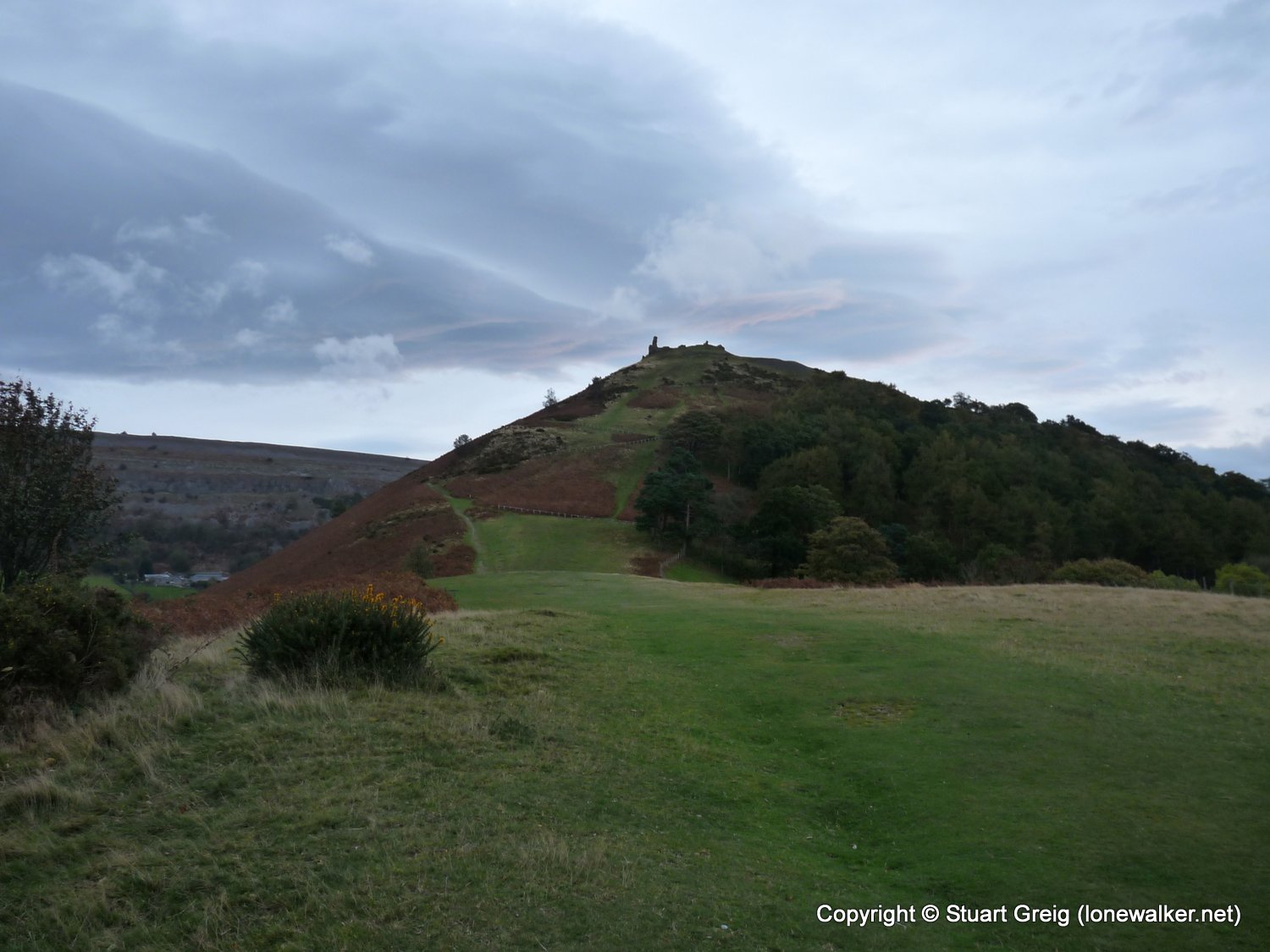 Once on the top though the views were majestic and you can imagine the advantage to be gained by holding this piece of high ground against unwelcomed tribesmen, screaming across the fields and valleys from Wales. 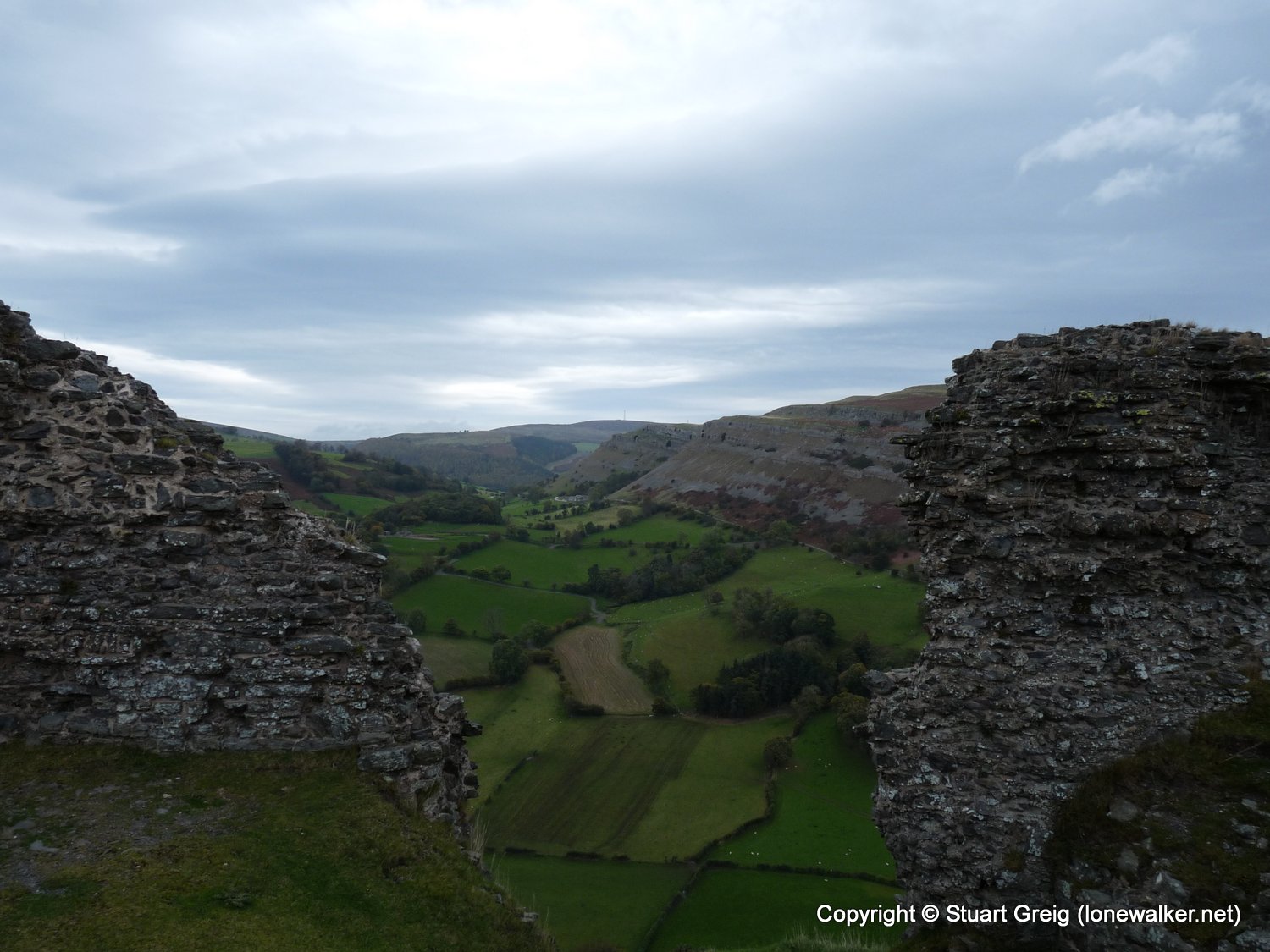 Looking north along our intended path 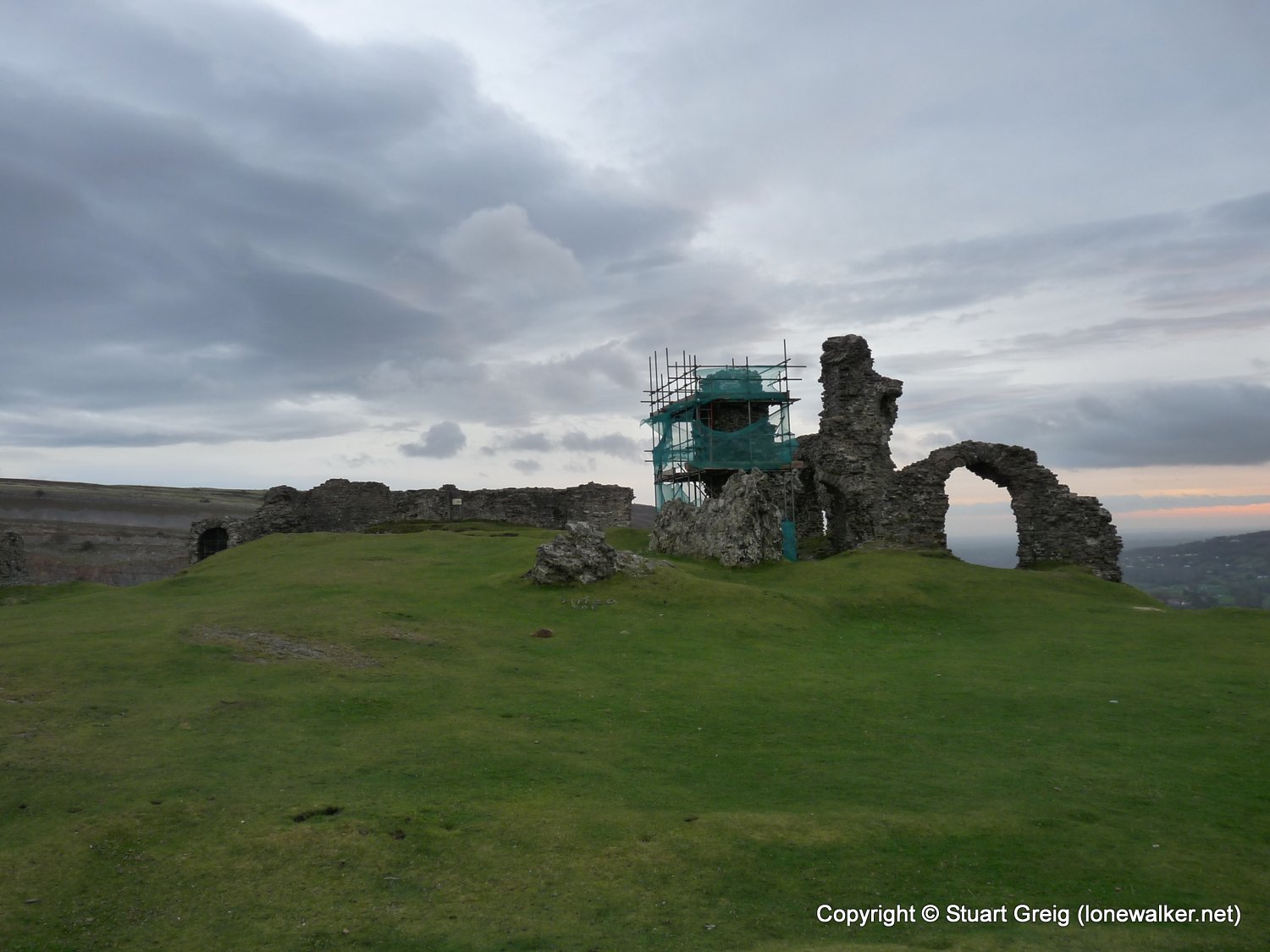 Shame about the scaffolding; this is what’s left of the castle

We spent a short time amongst the ruins, I spent it gasping on the grass and Pete skipped around taking photos and cooing at the architecture. Eventually I recovered enough to enjoy the site and look along the ridge towards the rest of our walk – we could pretty much see most of where we were going from here.

We left the summit and picked up the Offa’s Dyke path – my first return to this most hated of paths since my debacle in September 2007. Fortunately Pete had selected a fine section; which although it started out on a small country lane, it soon picked out a lovely path beneath the high craggy scars of Eglwyseg Mountain (don’t even try to pronounce it – I came up with Eggleseg and I’m sticking to it). 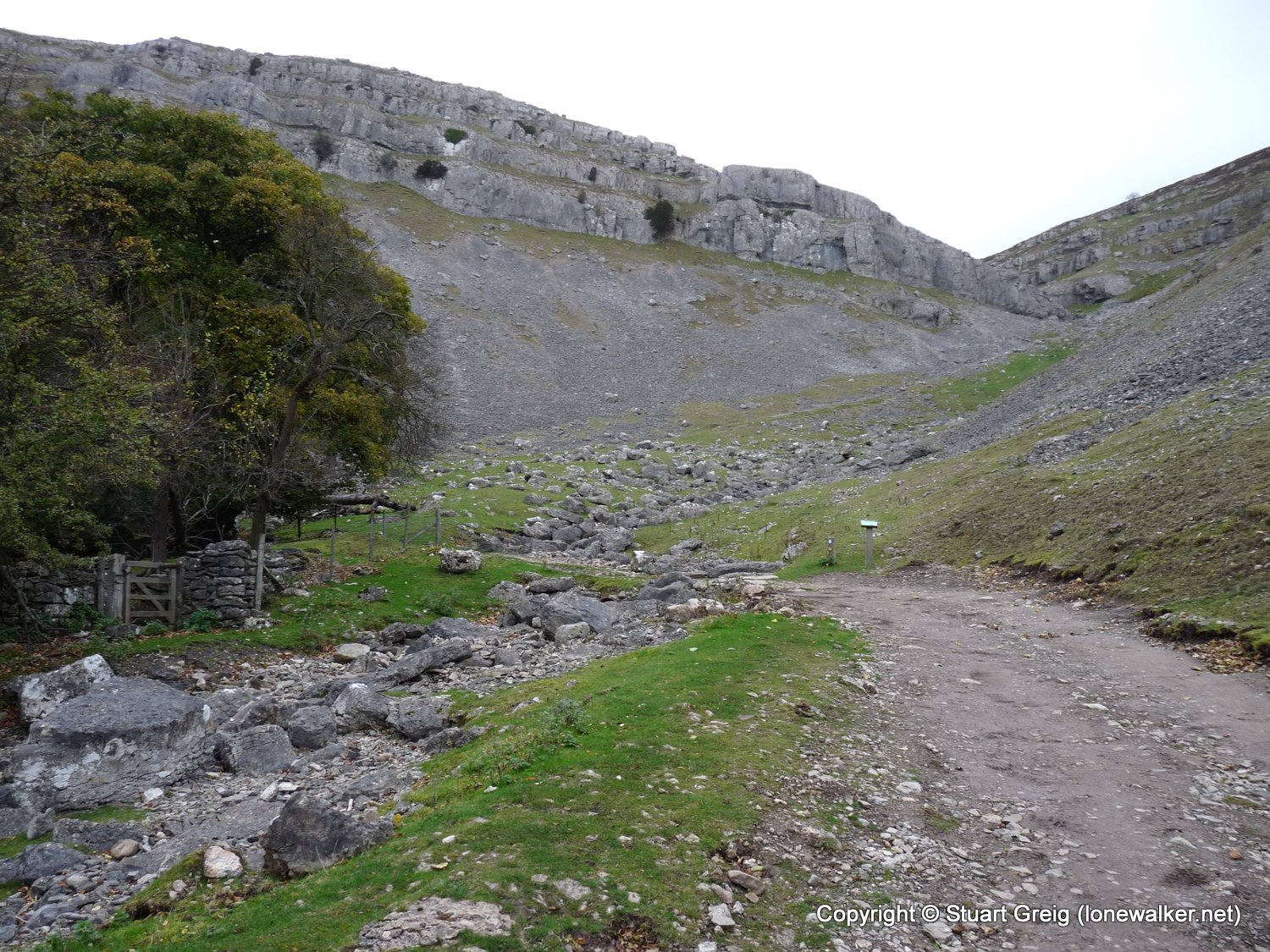 The path runs beneath Eglwyseg Mountain 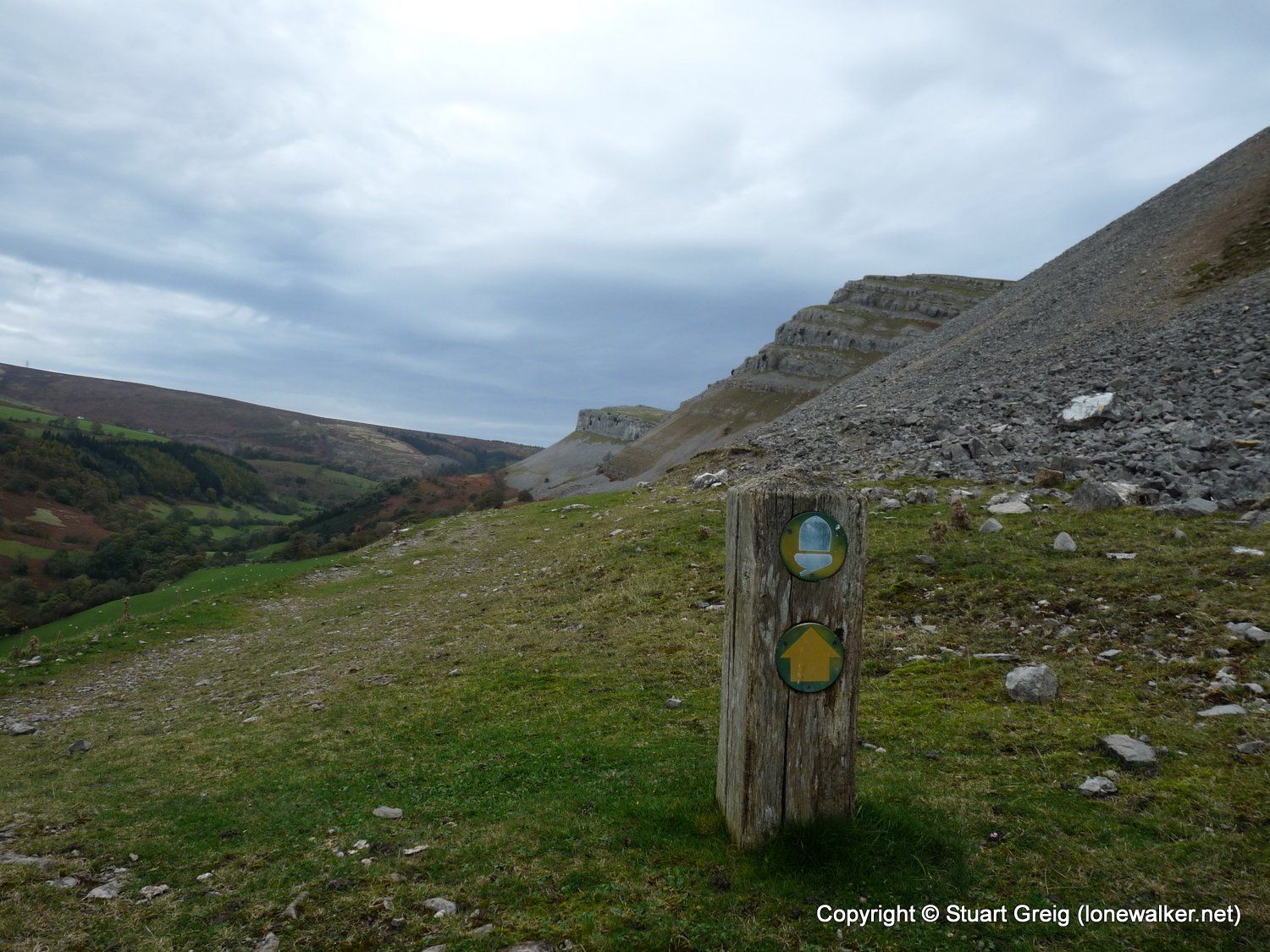 The lovely path soon came to an end though, or rather our association with it did. The path continued north along a tarmac road and we headed west, down the hill to World’s End Farm. It’s a bit remote here, but not really worthy of the epithet World’s End – I suppose the locals didn’t get out much. 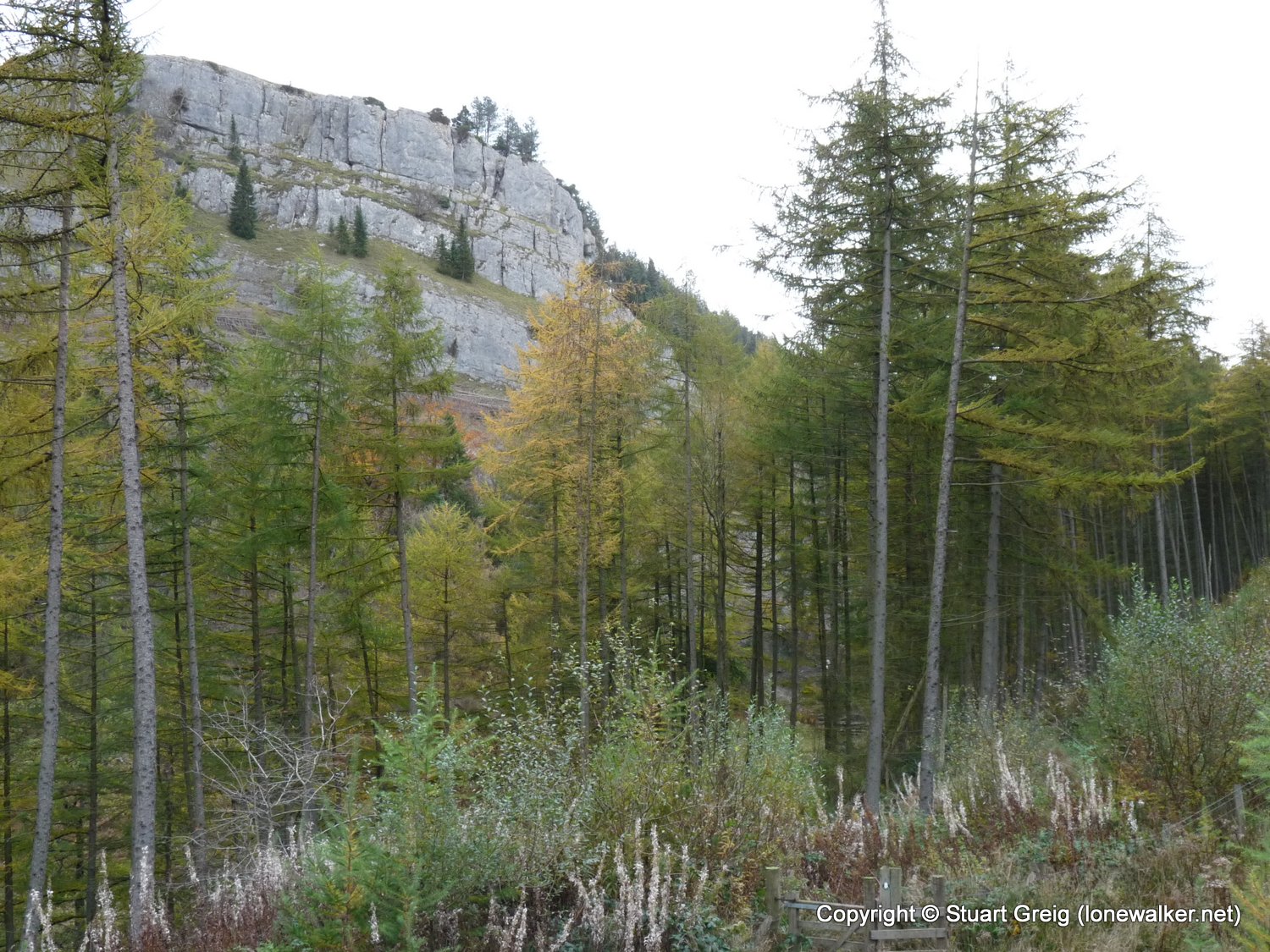 Looking towards World’s End, as our path deviates 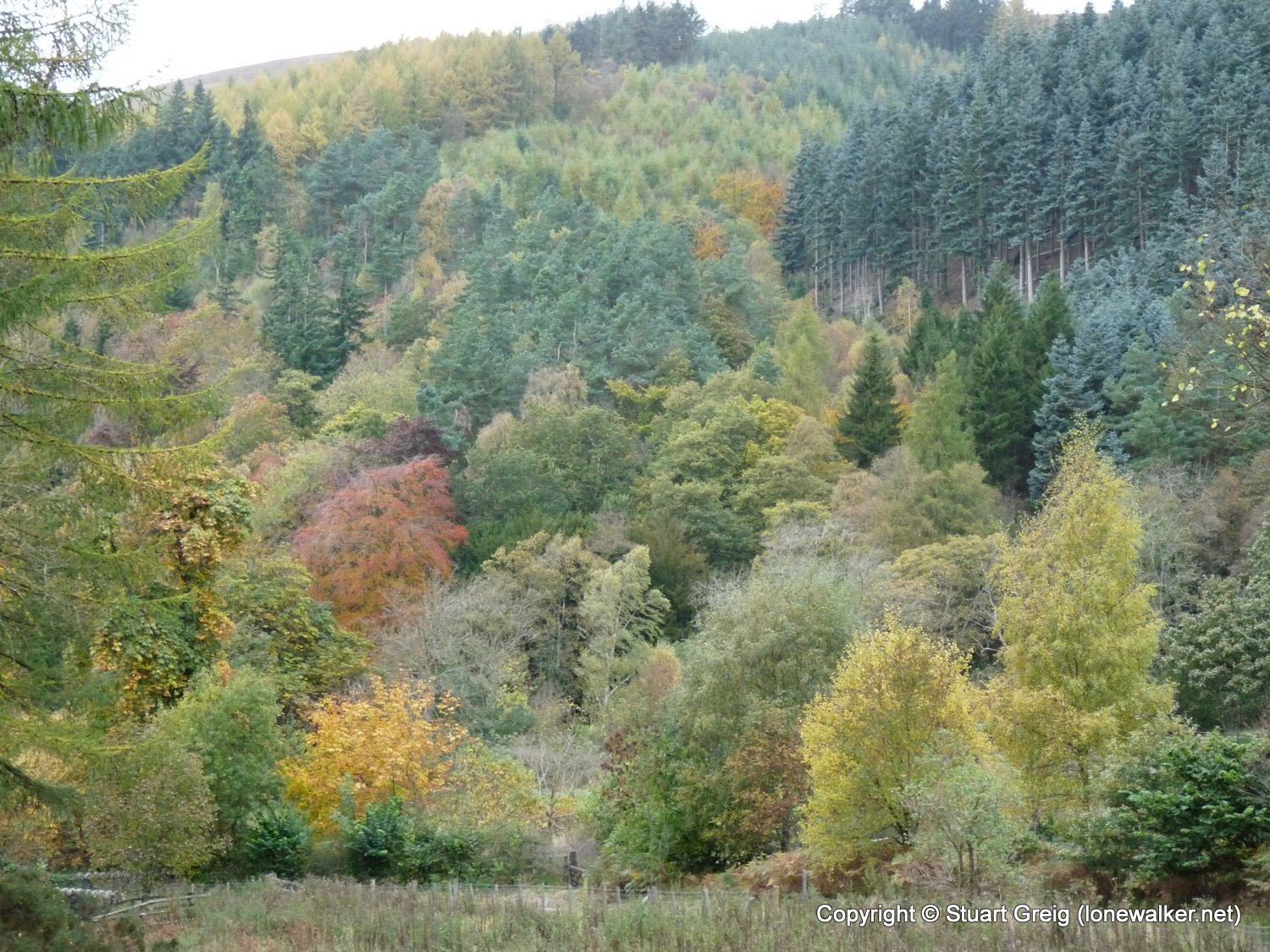 The colours of autumn

We skirted World’s End Farm, cutting a large corner off the road section by taking advantage of their front garden – it was a huge front garden, but nevertheless I kept expecting to hear the baying of hounds as the landowner “let slip the dogs”. We were soon back into Open Access country though and crossing a short, but welcome section of open moorland, following a narrow twisting path around the worst of the peat bogs. 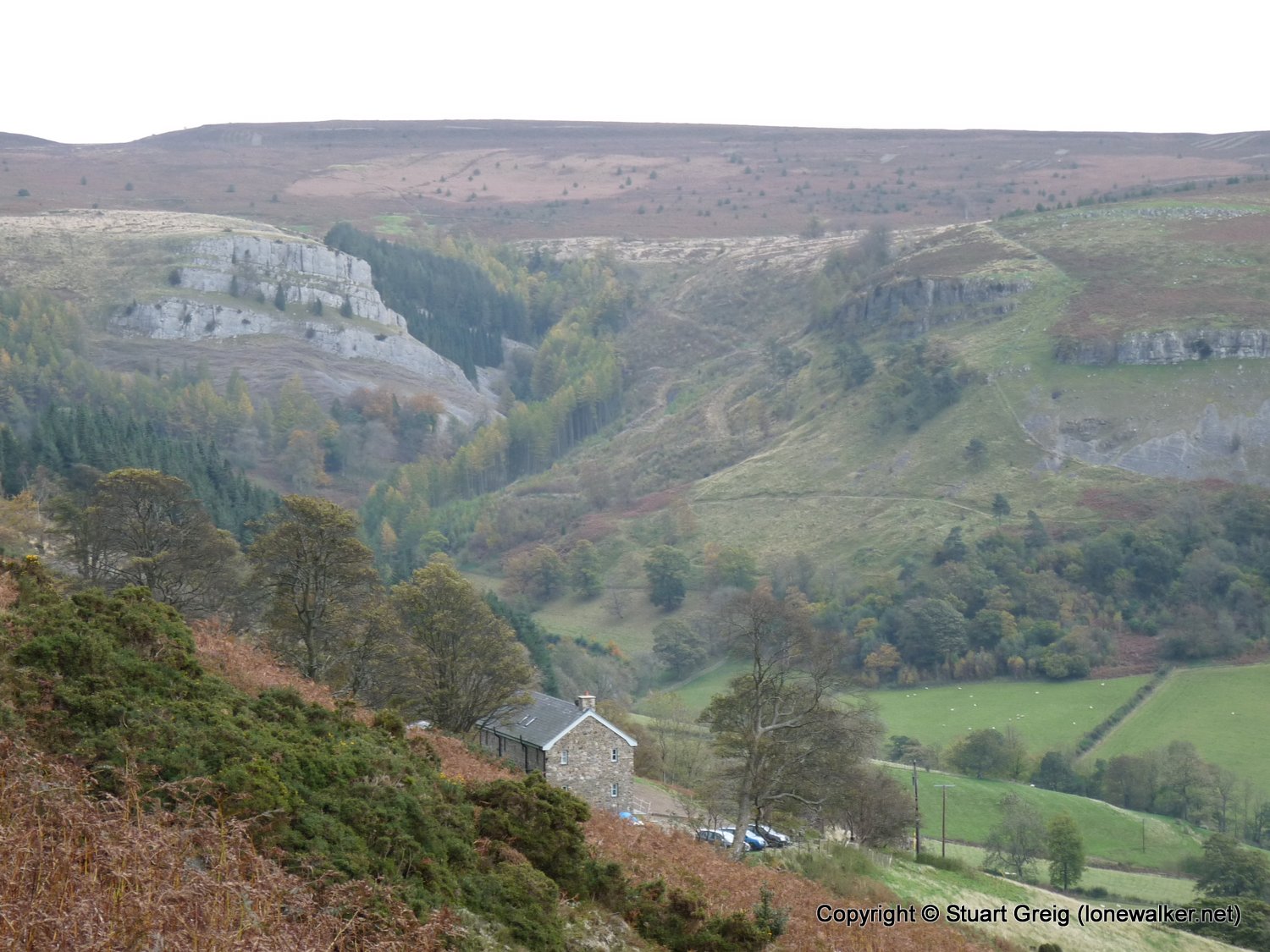 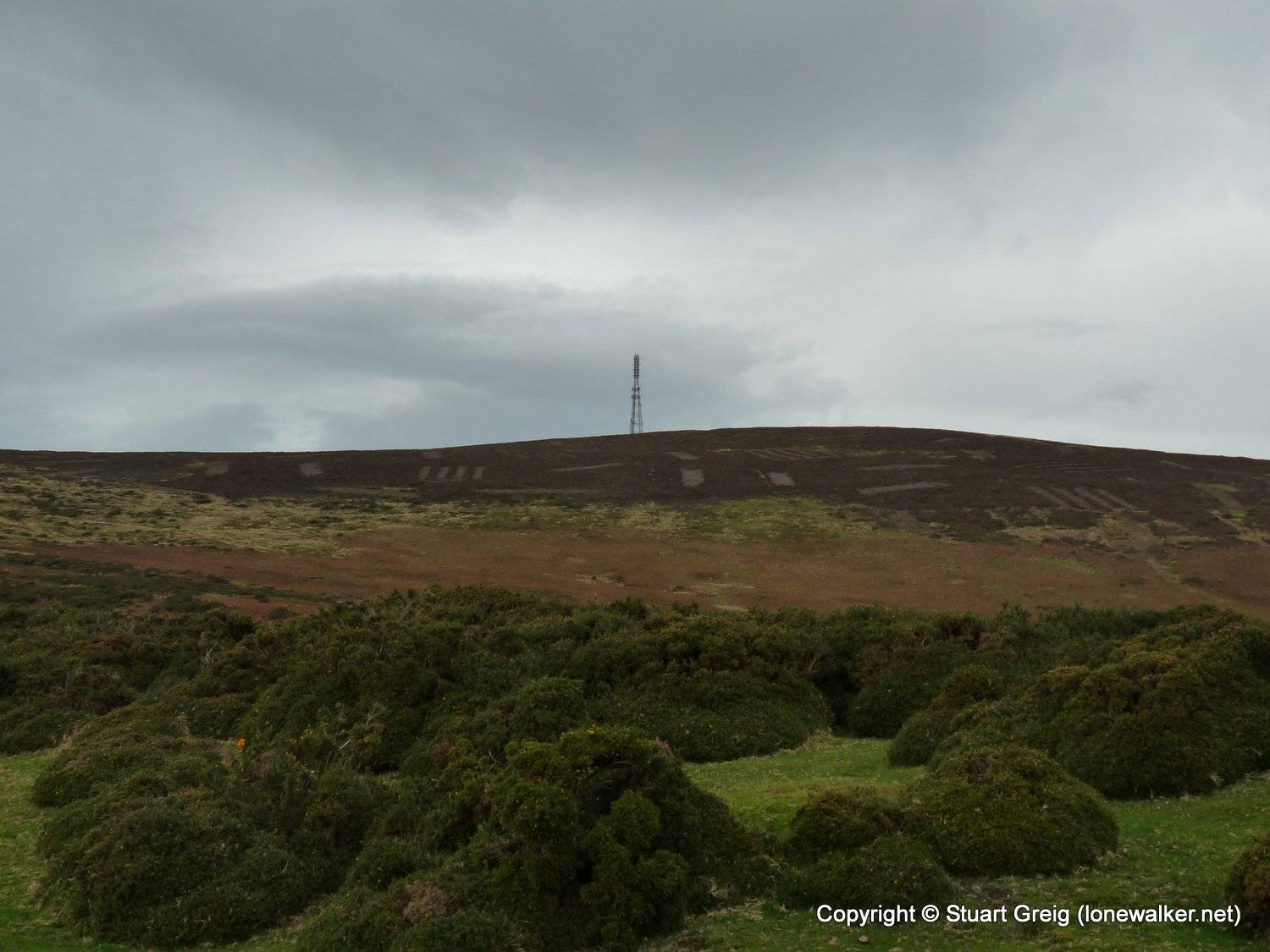 Open moorland and the transmitter mast at Cyrn-y-Brain 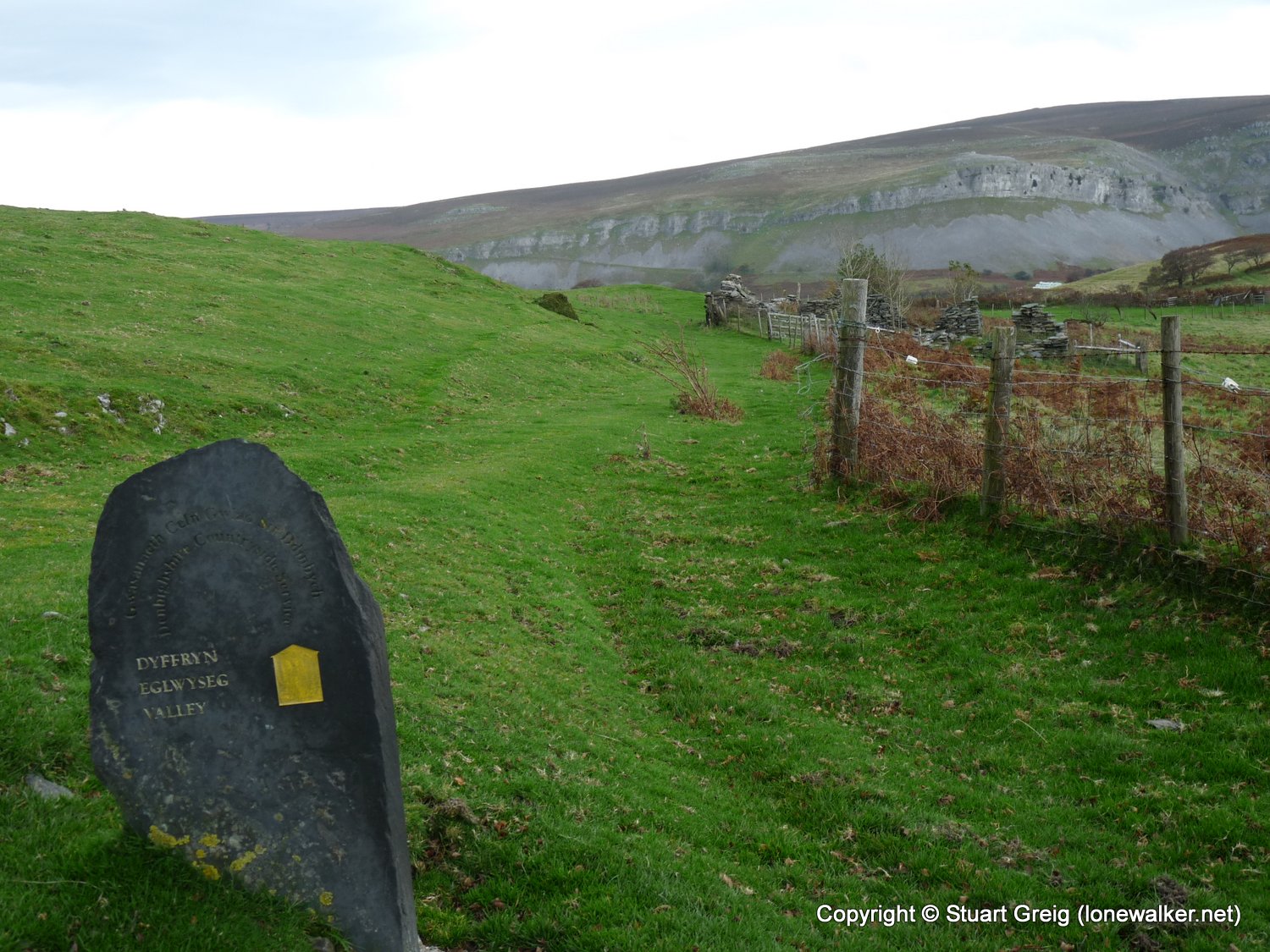 Fine slate marker post points the way across the moor

From the moorland we made our way into dense forest. I’d picked this route and this was one section I wasn’t all that sure about. The RoW drops down into the valley too soon for my liking and I’d spotted a track, marked on the OS map, leading through the Foel Plantation. There was no guarantee of course that this was still there, not only are my maps about 4 or 5 years old, but forestry tracks are notoriously unreliable; there one week, gone the next. 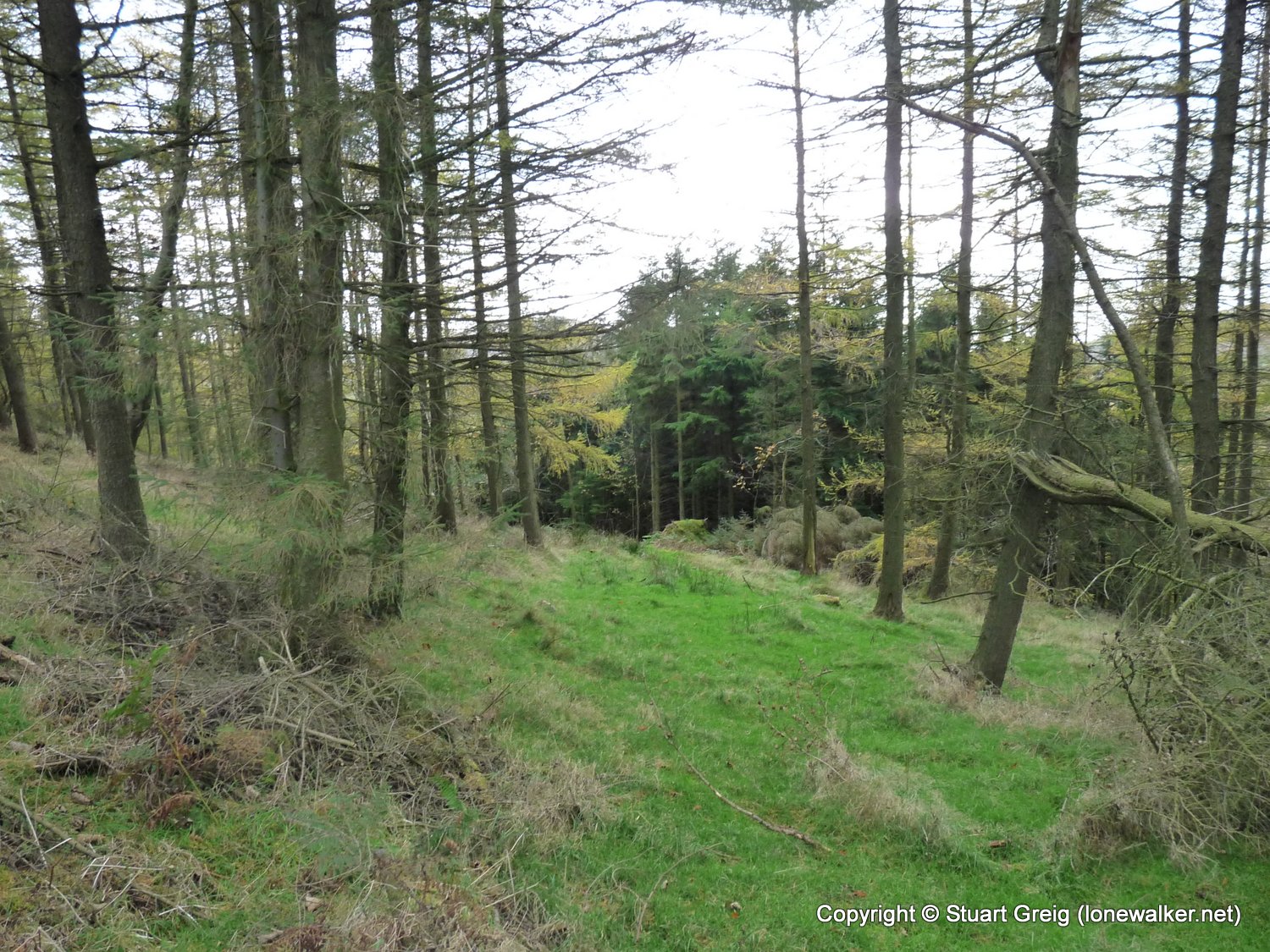 The forestry ride down into Foel Plantation

We came to a gate at the edge of the forest though and that seemed to suggest the start of some sort of access into the woodland, and sure enough a green track headed down the hill into the heart of the woods. It was very overgrown in places and a bit muddy, but not
hing like as bad as it could have been. It led out to a much more permanent looking forestry road which we followed down hill. It soon became apparent that the branch road to the right that we should have seen was not there – lost over time maybe, or never there to start with perhaps. Either way we were heading in the wrong direction. We needed to be further down the slope to our right.

A short map conference later and we decided to have a look down the slope and see if we could find the track we were supposed to be on. Better that than a large detour on the wrong track altogether. We slithered down the wooded slope and came to an overgrown track, which we followed for a short while before we realised this wasn’t the right track either, we needed to be even further down the slope. we looked, but couldn’t see a likely path lower down and this path we were on was rapidly turning into an assault course for lumberjacks.

We decided to cut our losses and return to the good path higher up the slope – it might be going in the wrong direction, but at least it was navigable. After a slithering and bramble scratching scramble back to the road we pushed on. 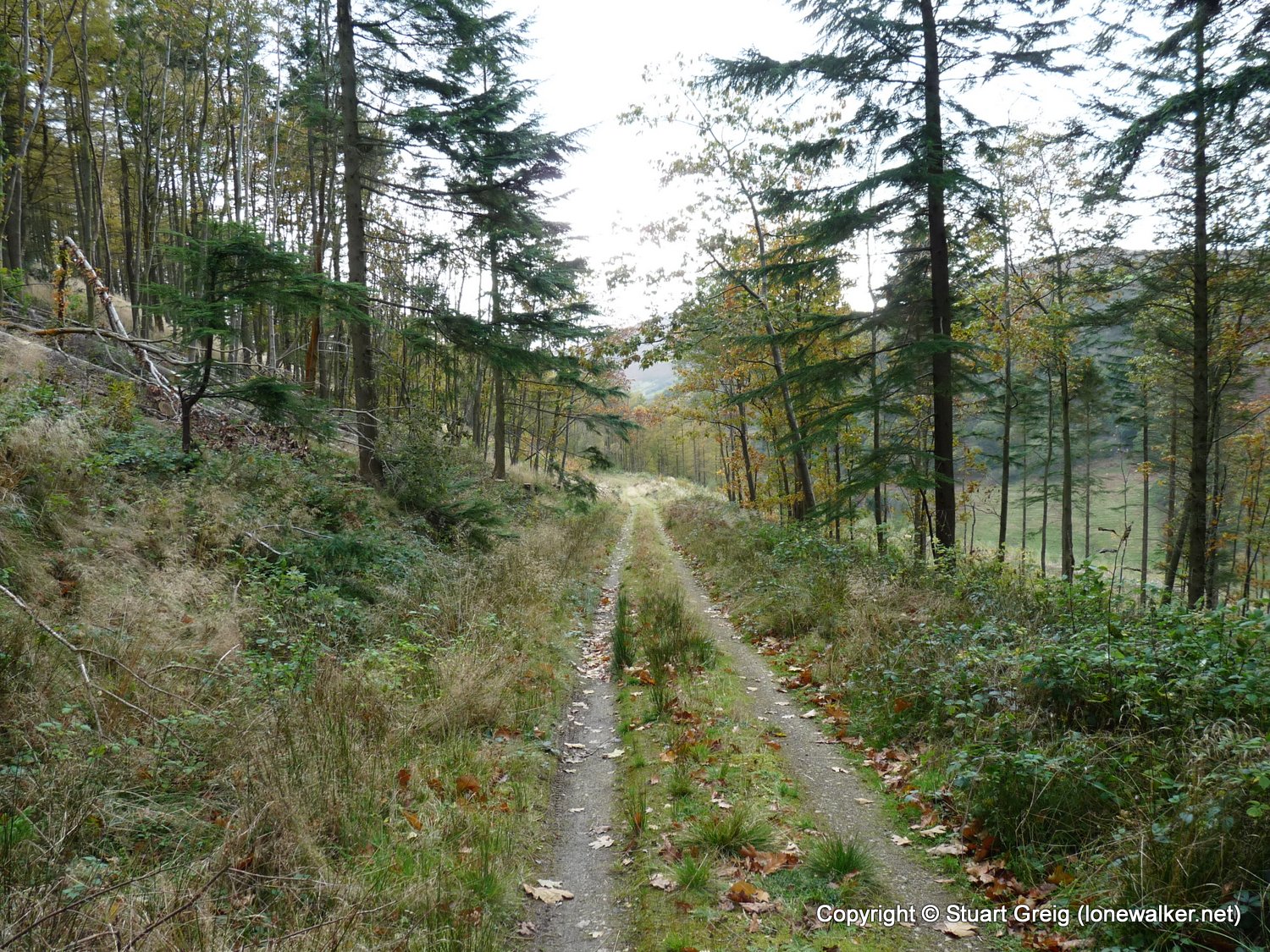 It might not be going where we want, but at least it’s a path

As you may be able to see from the map at the top of the page we took a large detour through the forest, finally picking up the correct path and leaving the Foel Plantation in exactly the spot I’d expected to leave it. so we weren’t lost at all – just taking the long cut.

We dropped down a country lane and then picked up footpaths across the fields. Descending into and then ascending out of a wicked little valley got the blood rushing through my system again and I stopped to take a few photos as an excuse to get my breath back. 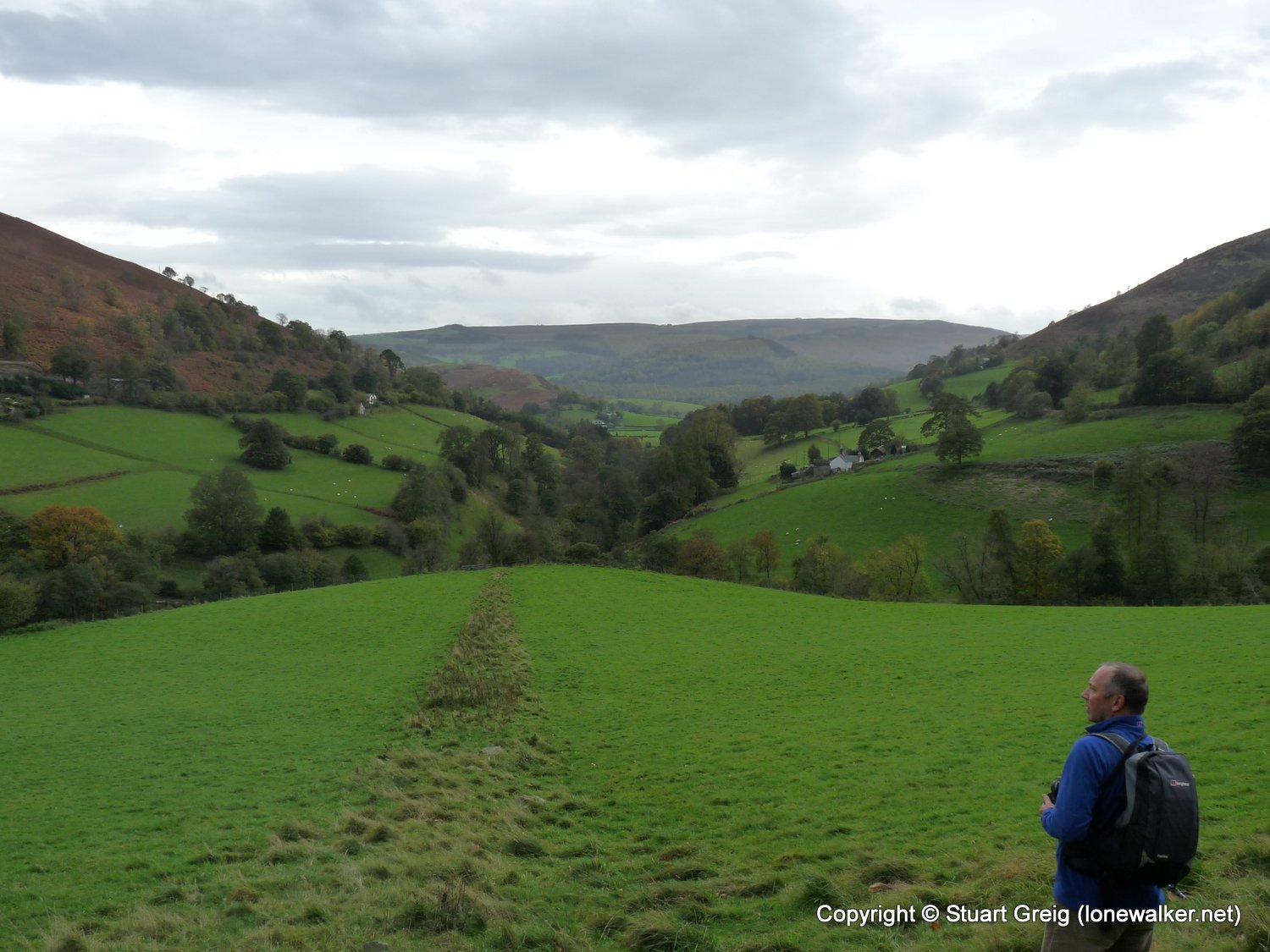 Heading down the valley to cross the Eglwyseg River 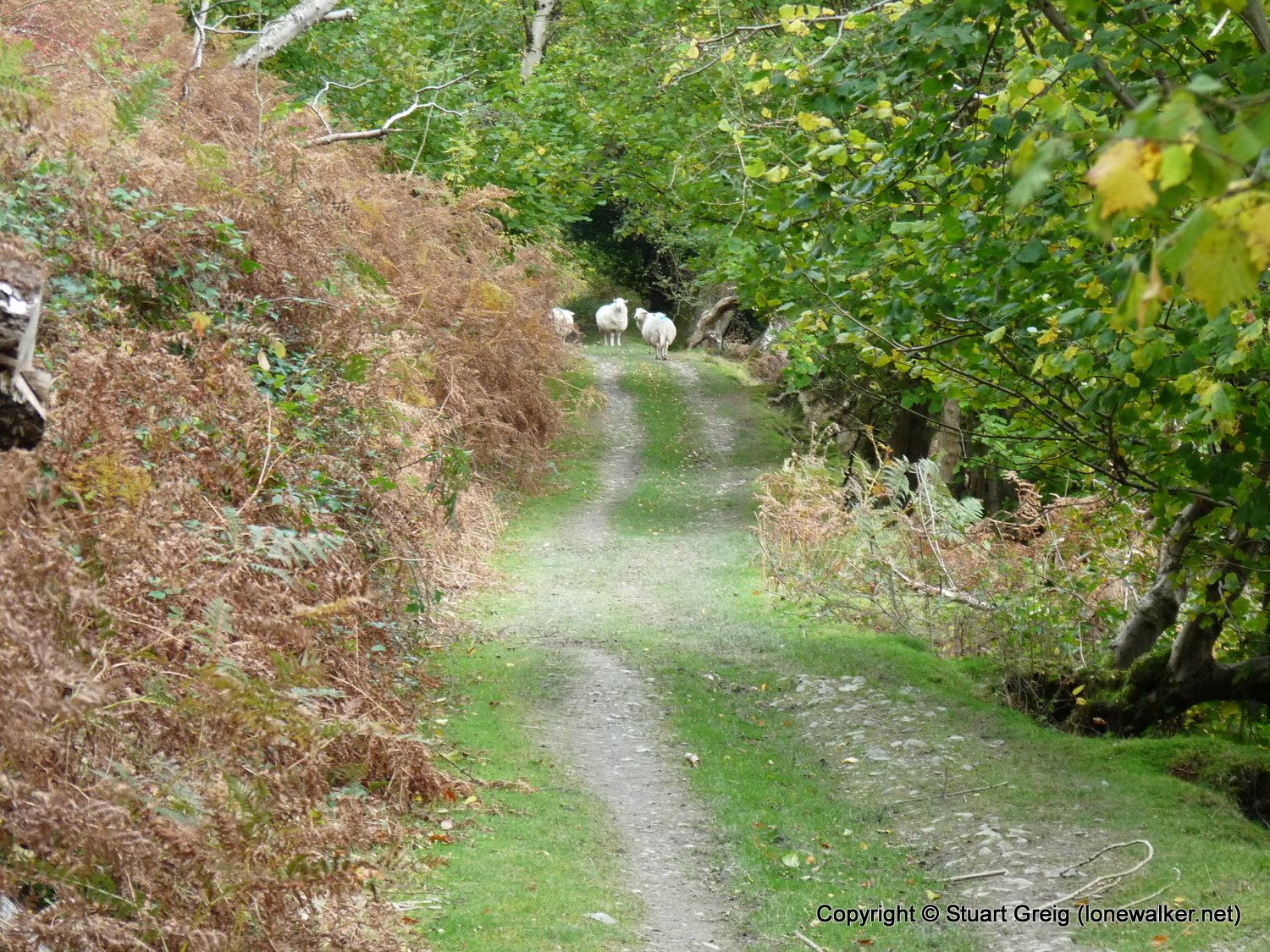 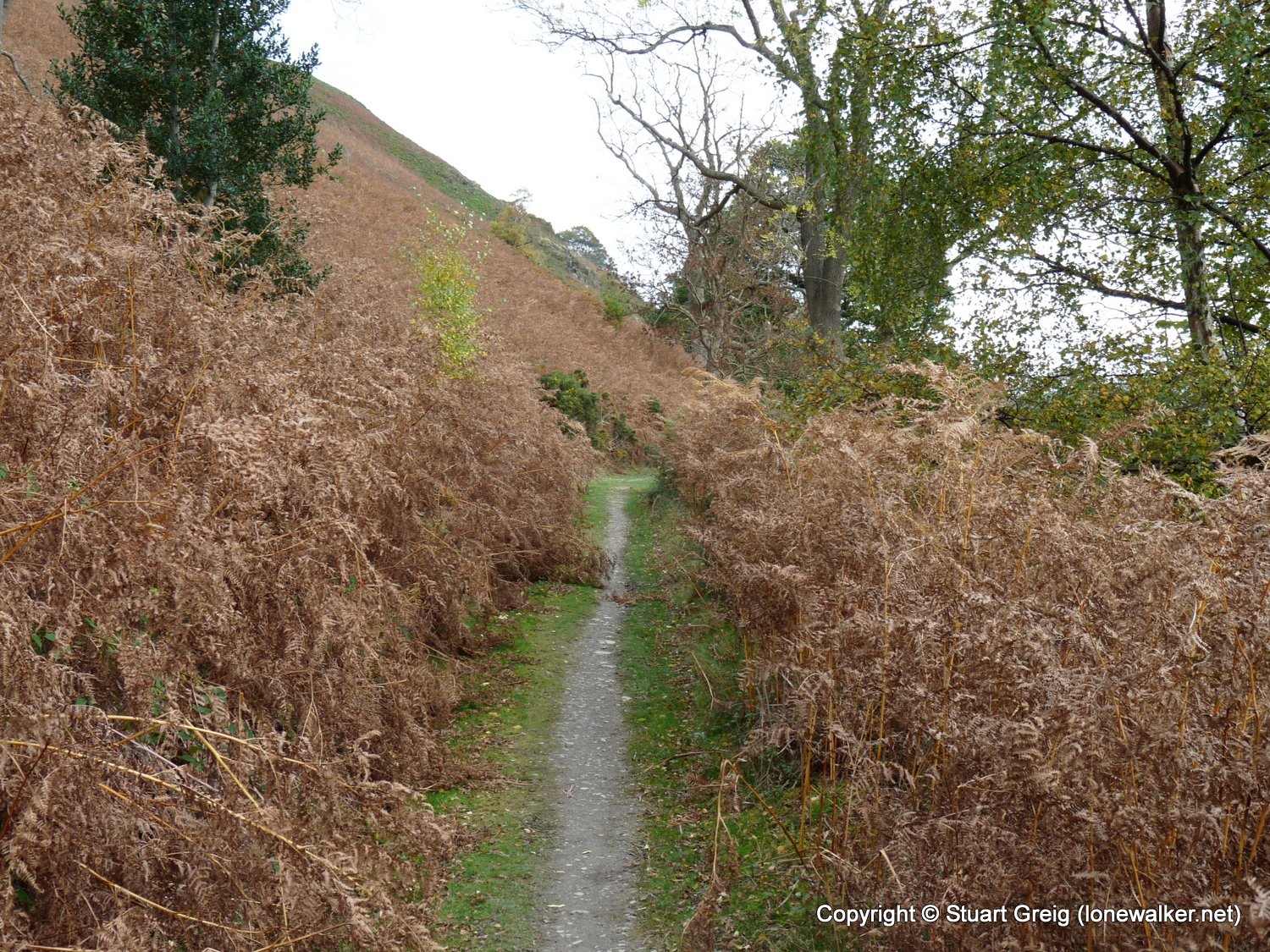 The path back to Llangollen

The path now led along bracken-lined paths, past the old Abbey at Valle Crucis, offering some fine views down the valley and along the river. I couldn’t believe we still hadn’t been rained on, but if anything the sky was brightening and it was a reasonable day. 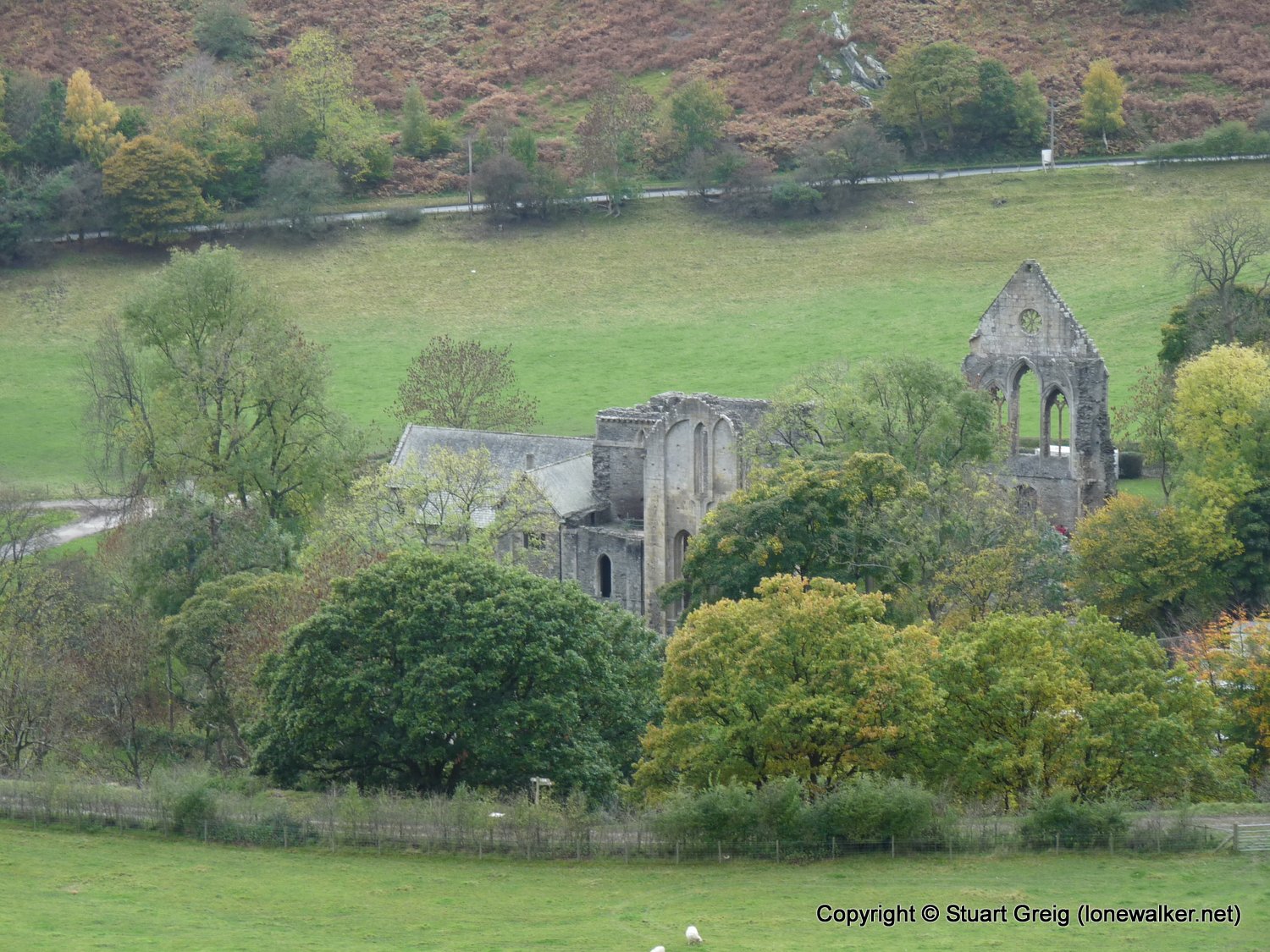 The Abbey at Valle Crucis 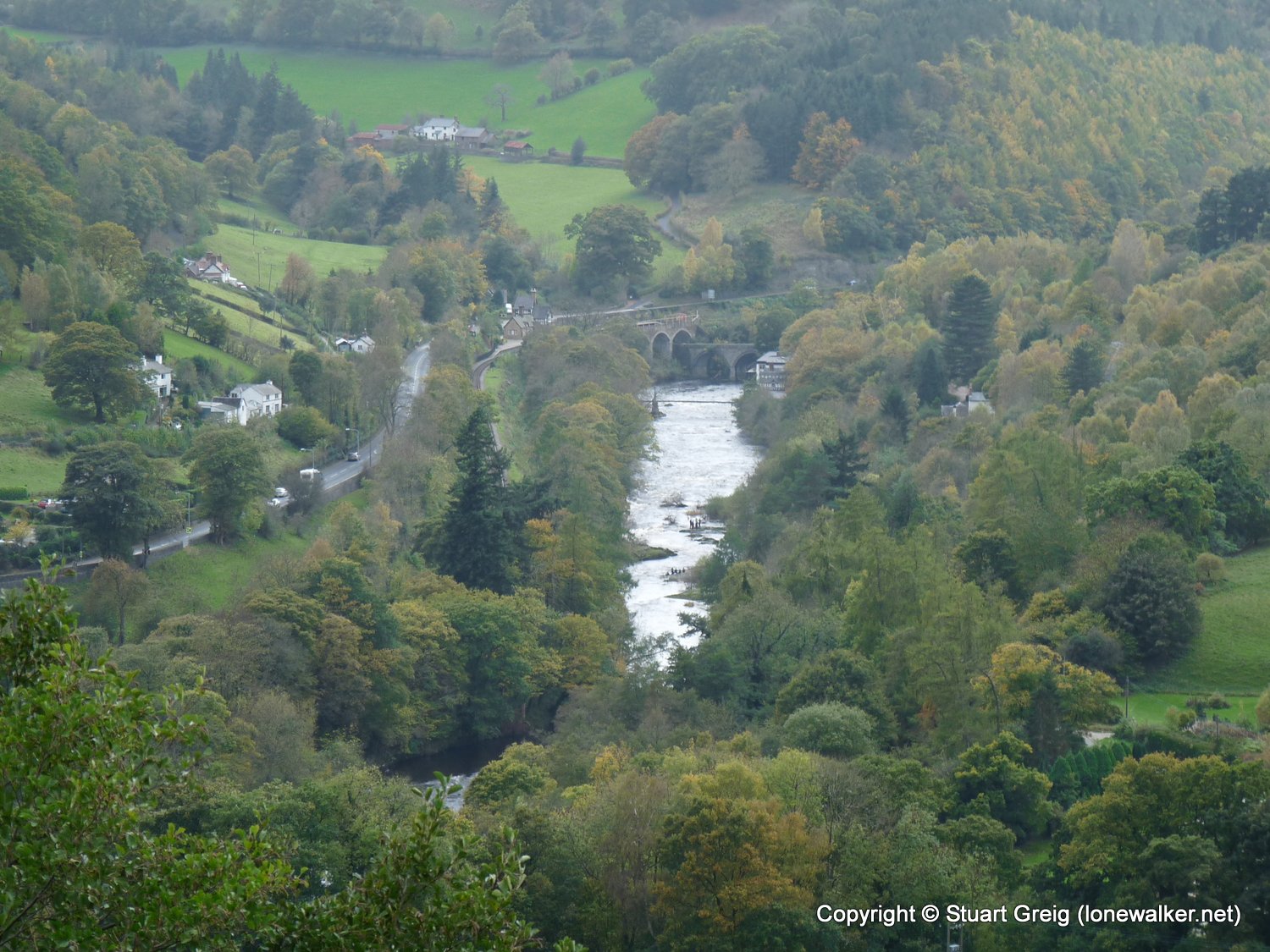 We passed beneath the other side of Castell Dinas Bran, still looking formidable on its hill and before long we were back in the town. 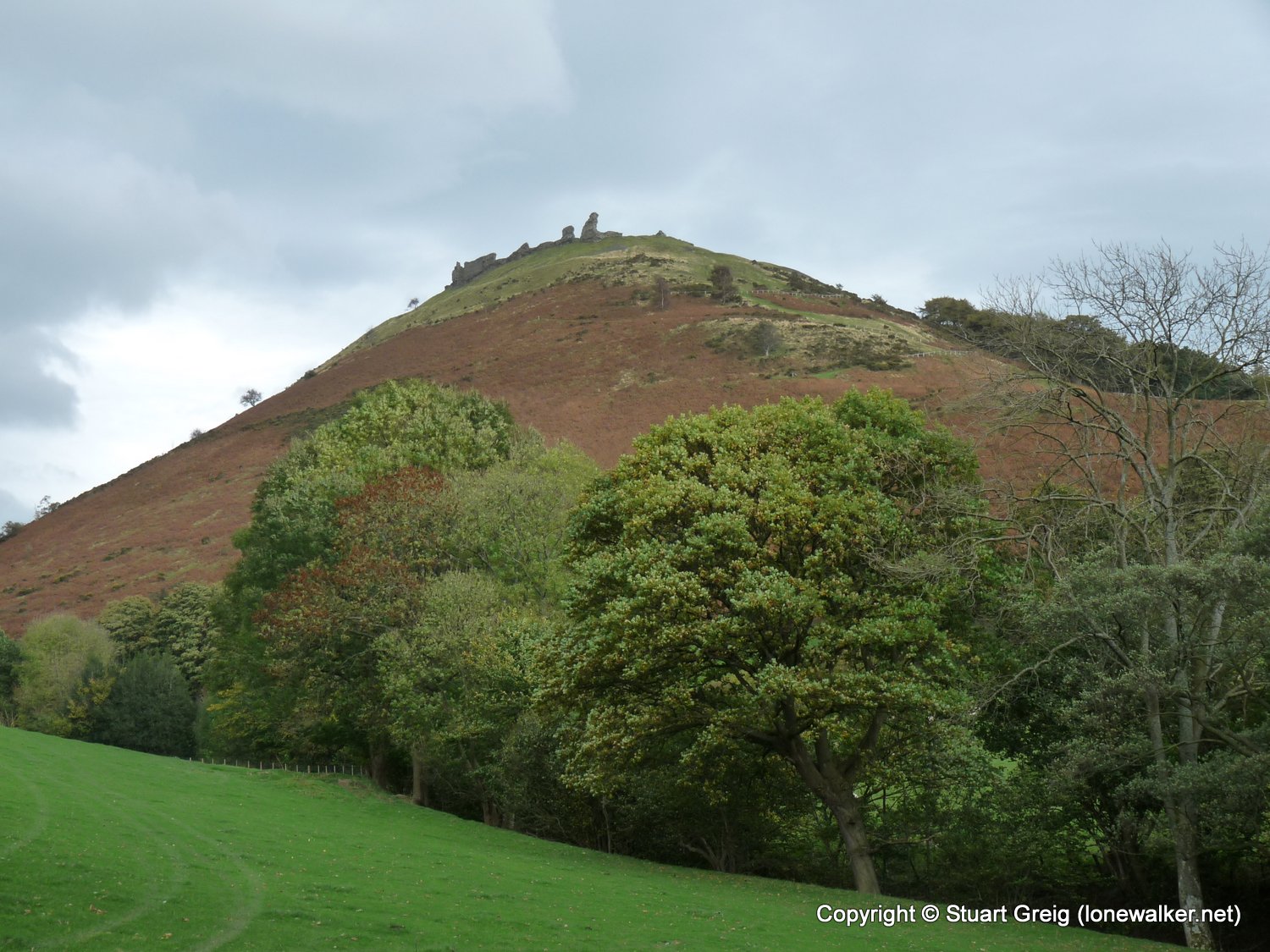 The canoeing event was just about to start and we waited on the bridge in the town to watch the first couple of competitors come down the course. They weren’t the only ones about to get wet though – it started to rain as we were standing on the bridge, so we hurried back to the car before it came down too hard. 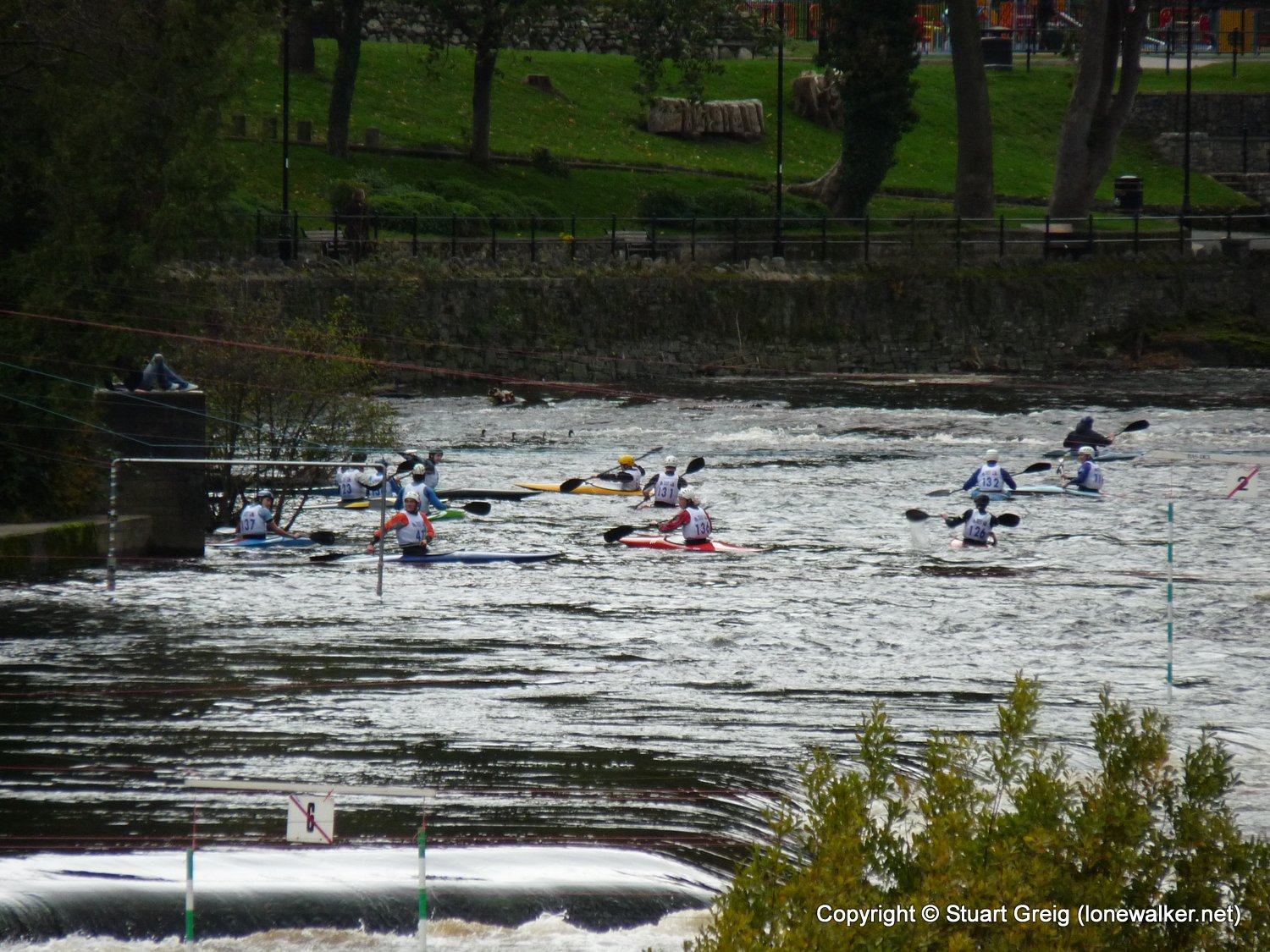 Competitors waiting for the start of the event in Llangollen. 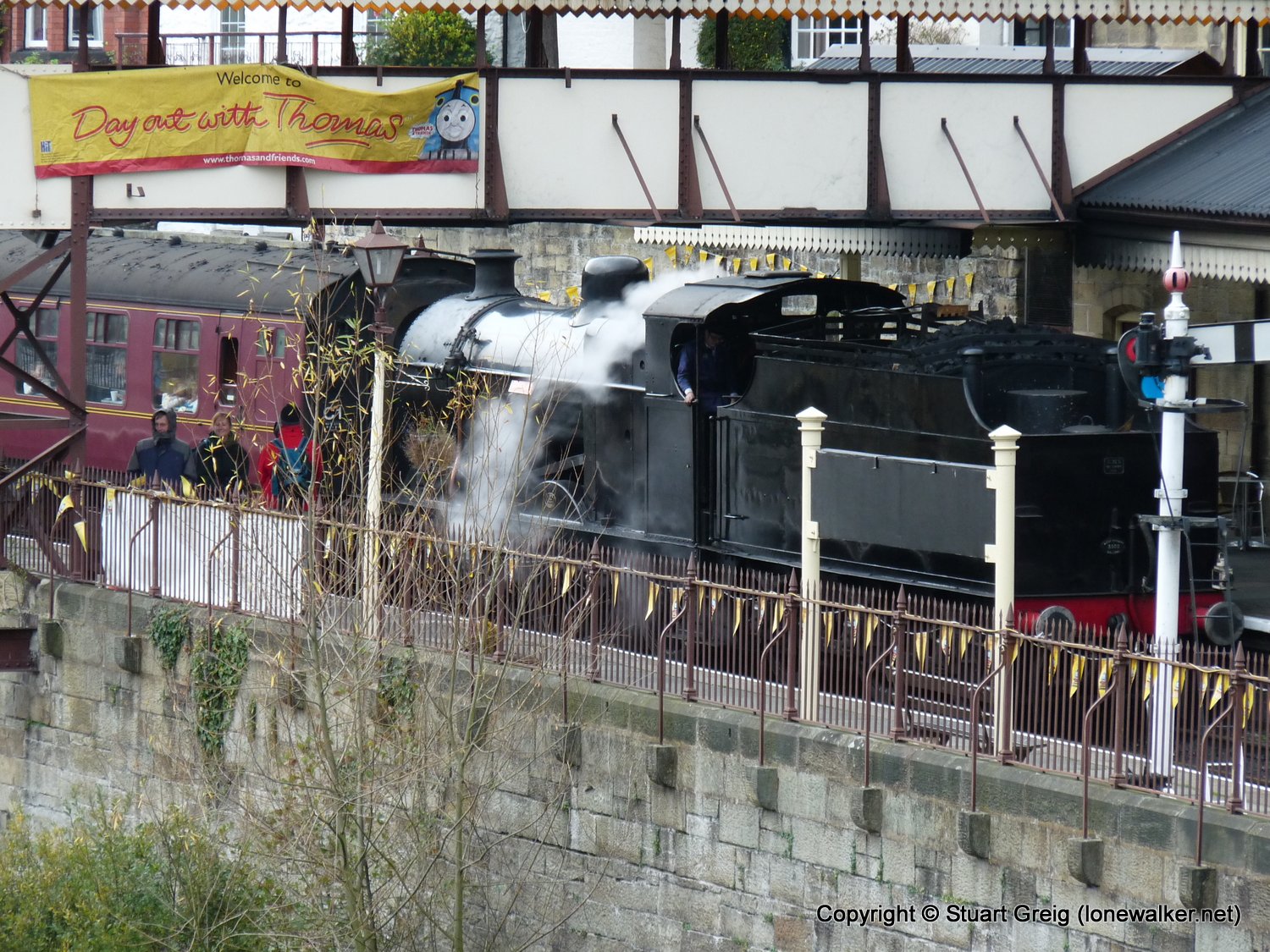 As soon as we were back in the car the rain began properly – perfect timing really. All the roads on the way home showed evidence of recent rain and we now all know what happened in the Lakes on this day, but we were dry and warm and feeling quite self-satisfied. Lucky buggers!