The weather in the Lakes looked particularly bad this weekend, so I decided to head for the Howgills instead. Not too far from the Eastern Fells, the Howgills are the sweeping green giants you see from the M6 motorway, on the right if you're travelling North. The ones that most people think are actually the Lakes.

In fine weather the Howgills are benign green roller coasters with vast flat summits and windy open ridges and in my opinion not a great deal of fun for a day walk. In bad weather however, they become something completely different. The wind howls here, there are few impediments to its course across the summits and there is scant shelter on any of the big fells other than the occasional sheep scrape. If you're really lucky the mist will descend and you'll have no view at all, other than the path before your feet and a few feet of grass either side. From benign, green and beautiful they become grey, featureless and dangerous and in turn all the more interesting and exciting for the hill walker.

The Lakes or Snowdonia are the places to be in the UK when the weather is fine and clear, but the Howgills and the Yorkshire Dales are my destinations of choice when the skies are full of rain and the wind is cutting down from the North.

I left the car by a little church off Howgill Lane and cut through sodden woods and long grass laden with water to pick up a sheep trod on the hillside above Craggstones. This led to a clear green track that took me up into the mist and the wind to the trig point at Winder.

I began to feel the bite of the wind here and stopped to add another layer of clothing from my pack. I have started to carry much more clothing than I really need and I feel all the more comfortable and secure because of it. I have two spare base layers of differing types and and spare shirt to wear over them, plus a fleece of course. It was this that I now put on beneath my waterproof coat. The relief was instant and immediately felt warmer and safer.

I heard some voices behind me in the mist, but although they stayed with me for a while they never caught up and I never found out who the other mad fools were to be out on such a day.

The path was easy to follow, even in the dense mist that denied me a view of anything other than my feet and the path. There were even a couple of handy signs pointing the way to The Calf, the highest of the hills in the Howgills at just over 2200 feet.

From Winder onwards the wind became increasing strong and I was being buffeted from different directions as the path meandered slightly up the hill. The wind contained millions of tiny stinging bullets of rain which forced me to hold the hood of my coat over my face with one hand and use the pole in my other hand to stop from being blown over. When the wind came from the side, the noise of the rain hitting my hood, stuck tightly to the side of my head, was almost deafening.

At the Calf I stopped long enough to extract my anemometer from my pack and take a wind speed reading. It was steady at about 45mph, the strongest wind I have walked in since records began (in July :)) and gusting occasionally to almost 50mph.

From the Calf my plan had been to follow the ridge line to Fell Head and bag another of the Yorkshire Top 30, before dropping down to the road again, but this path now headed directly into the wind and progress had already became very slow, so a head wind would slow me down even more. Even though I was feeling pretty good I knew I was wet beneath my outer shell and another couple of hours in the wind and rain at this altitude could prove difficult. I exercised caution and used my emergency route from the Calf and followed the clear green track down White Fell. Even here I was having to walk at an exaggerated angle to prevent myself being blown over and it soon became clear that this was no quick escape from the buffeting I'd been receiving further up the hillside.

The valley I'd descended into was funnelling the wind, but it slowly lessened off as I descended. I must have looked a right sight to the farmer at Castely who greeted me cheerfully if rather bemusedly with a "where have you come from then?" We chatted for a few minutes and I set out across his fields to find my car, some respite from the rain and the deafening silence of no wind!

As I drove home I tried to think of a part of the walk I hadn't enjoyed, but there wasn't one.

Download GPX file for this walk:
If your browser opens the file directly, right click and "Save As.."

Hills on this Walk

Trig Points on this Walk

Photos from this Walk

Click any image to open the full screen photo gallery 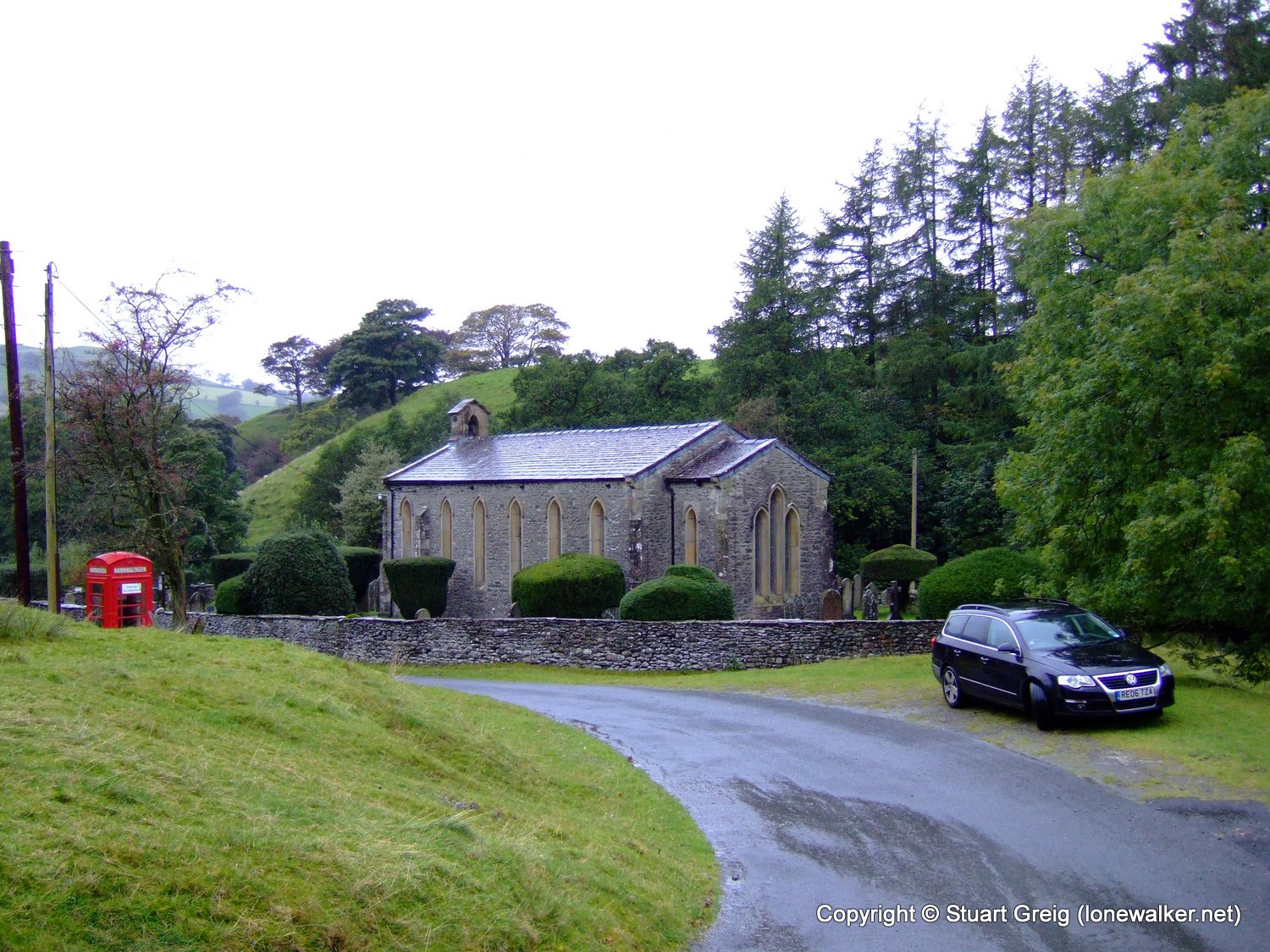 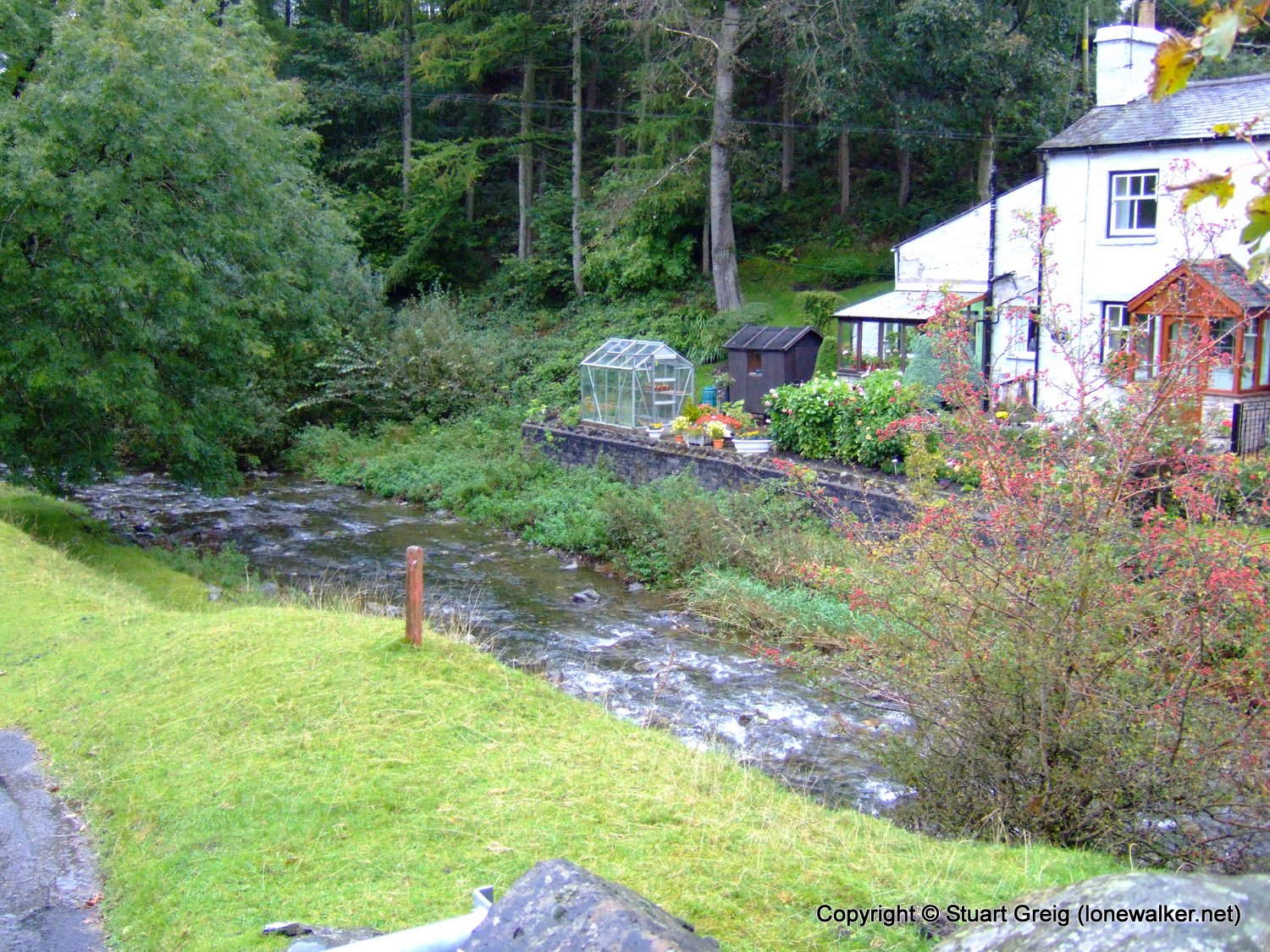 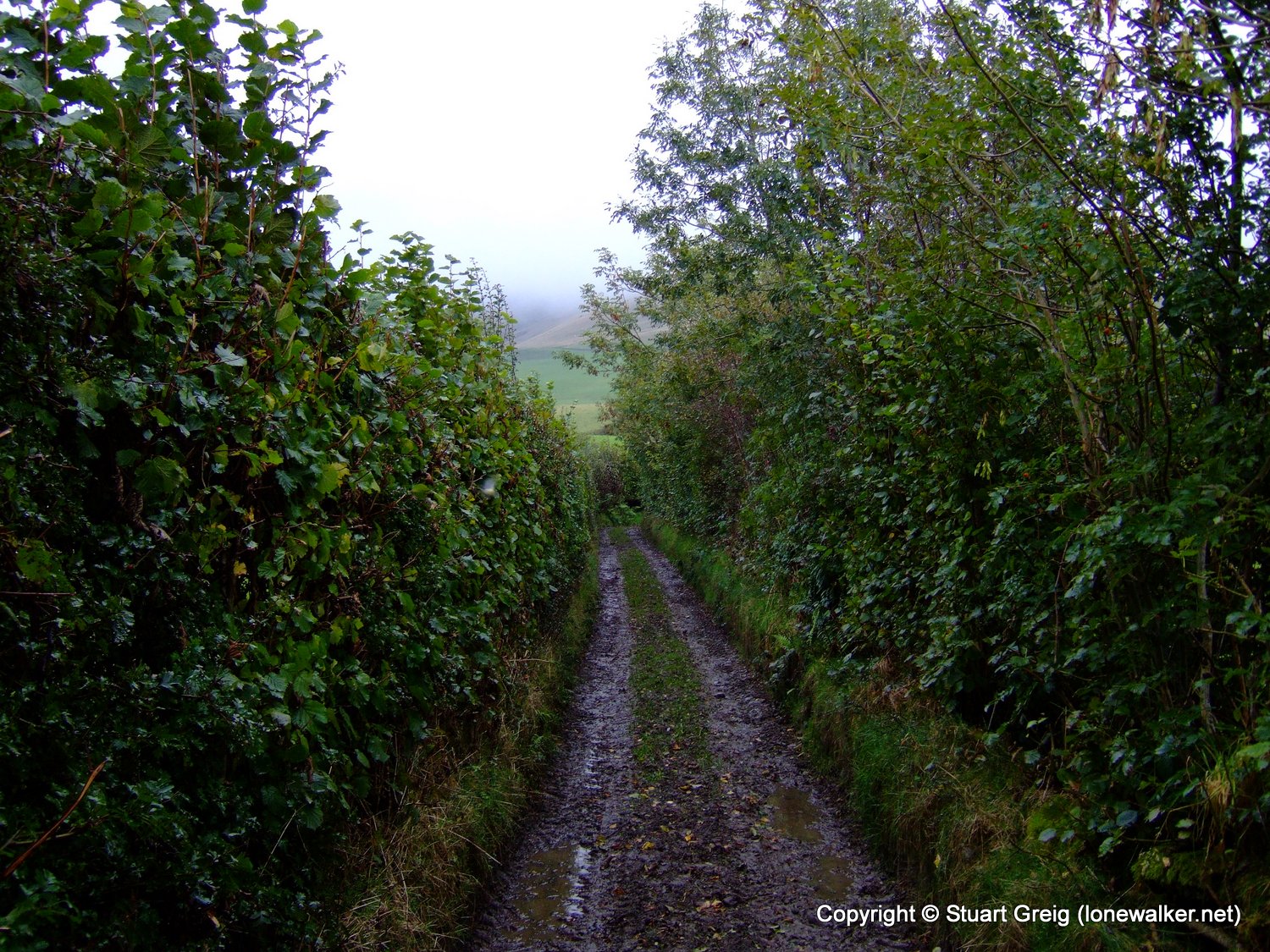 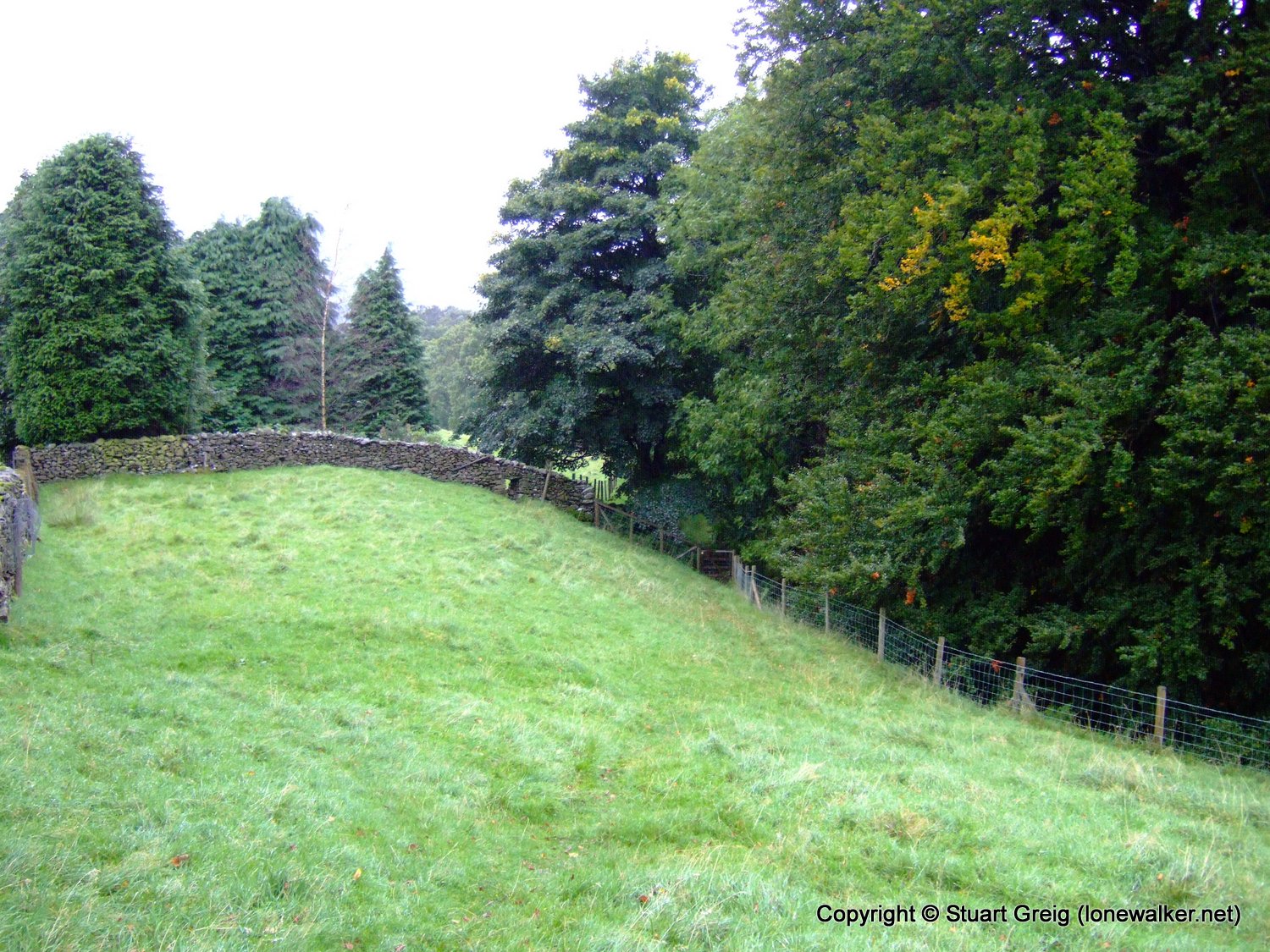 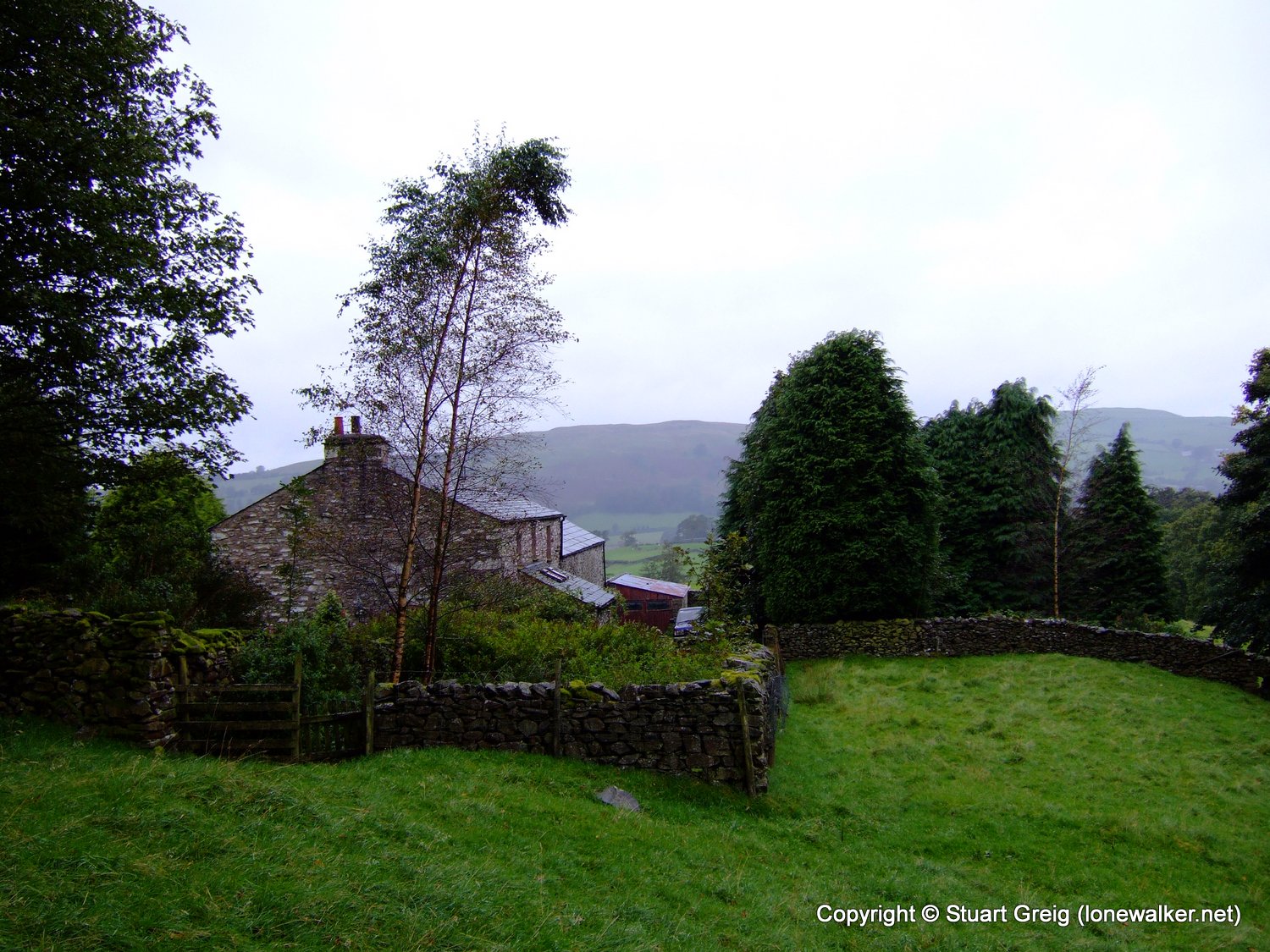 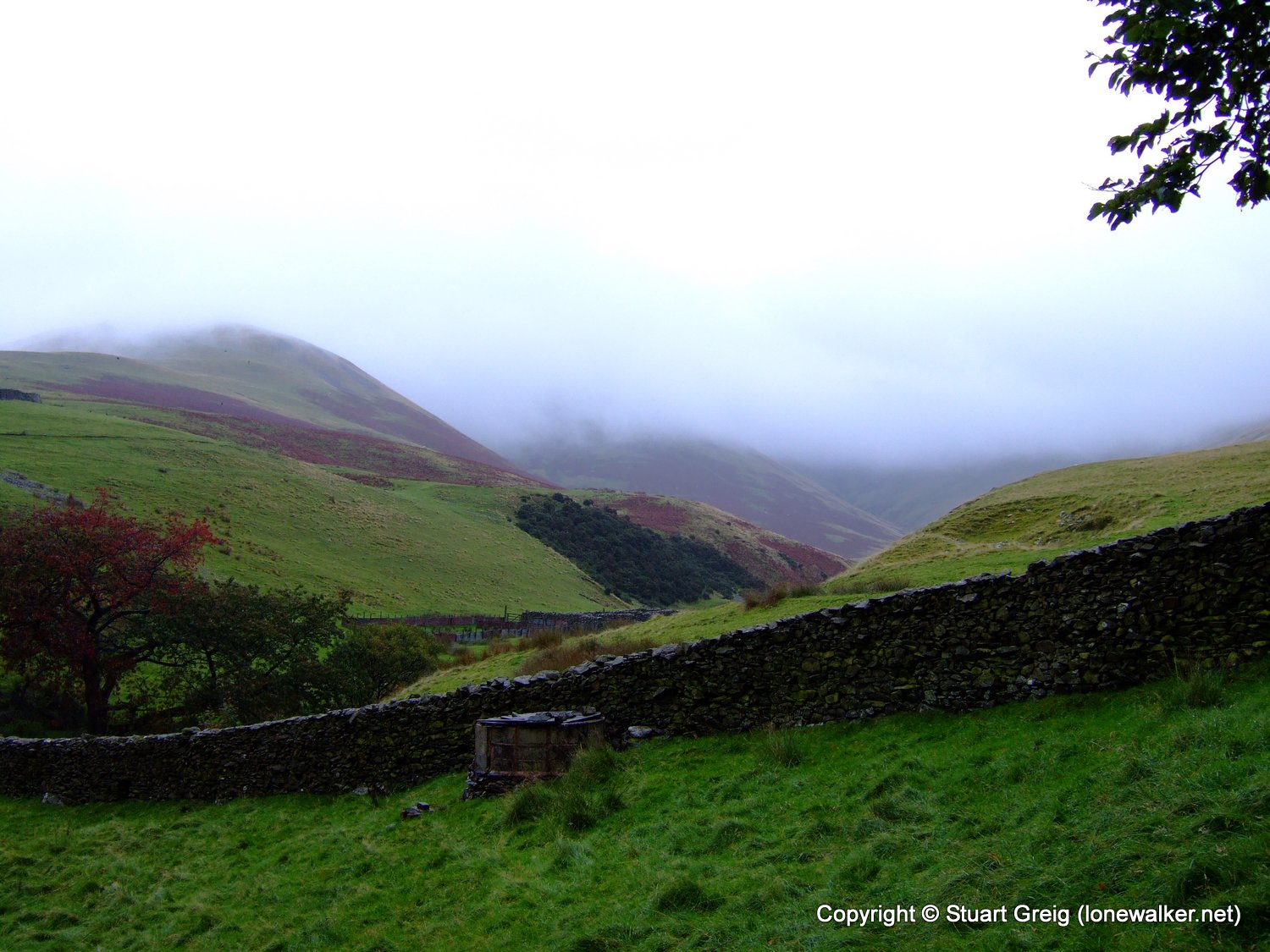 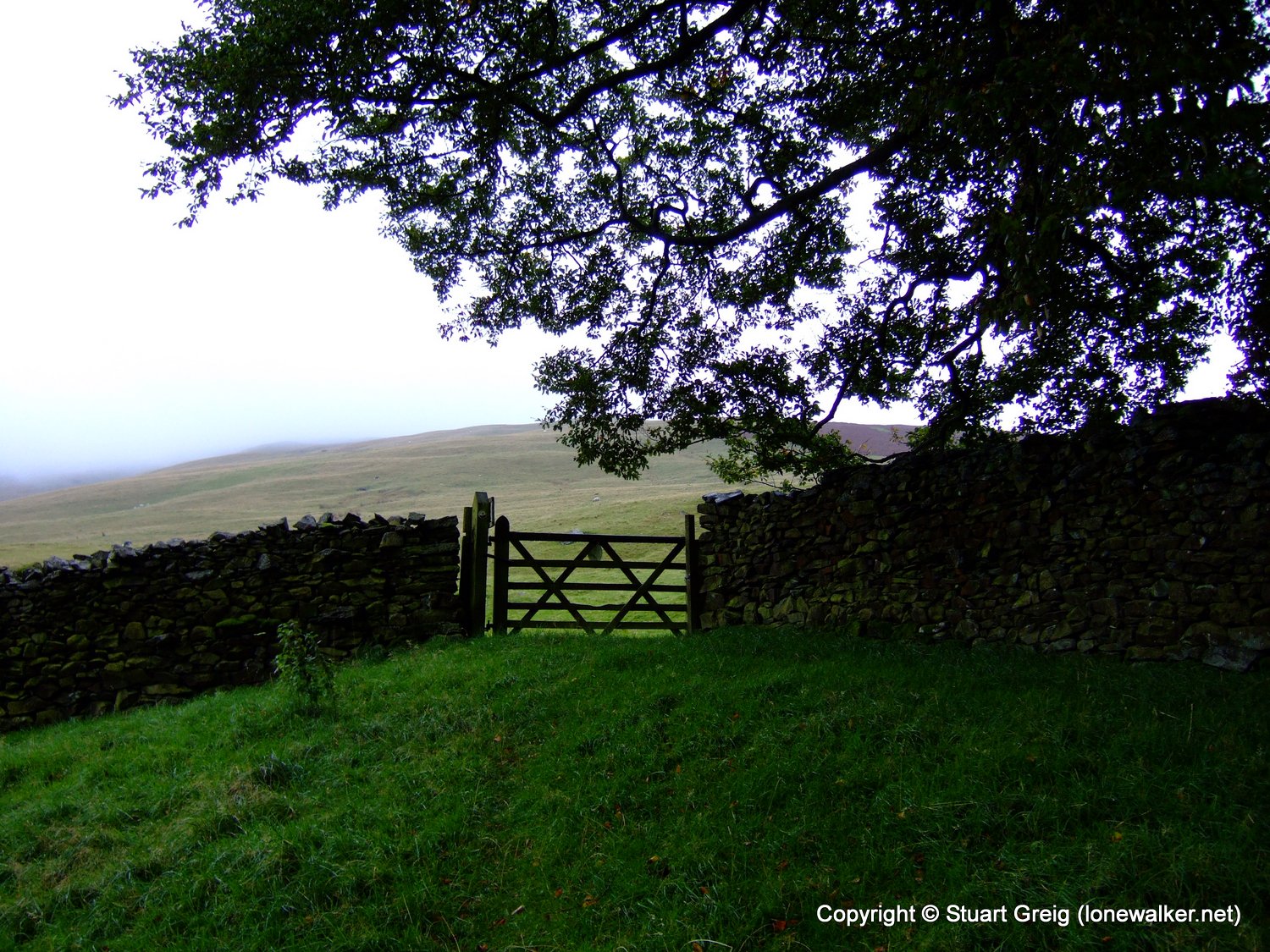 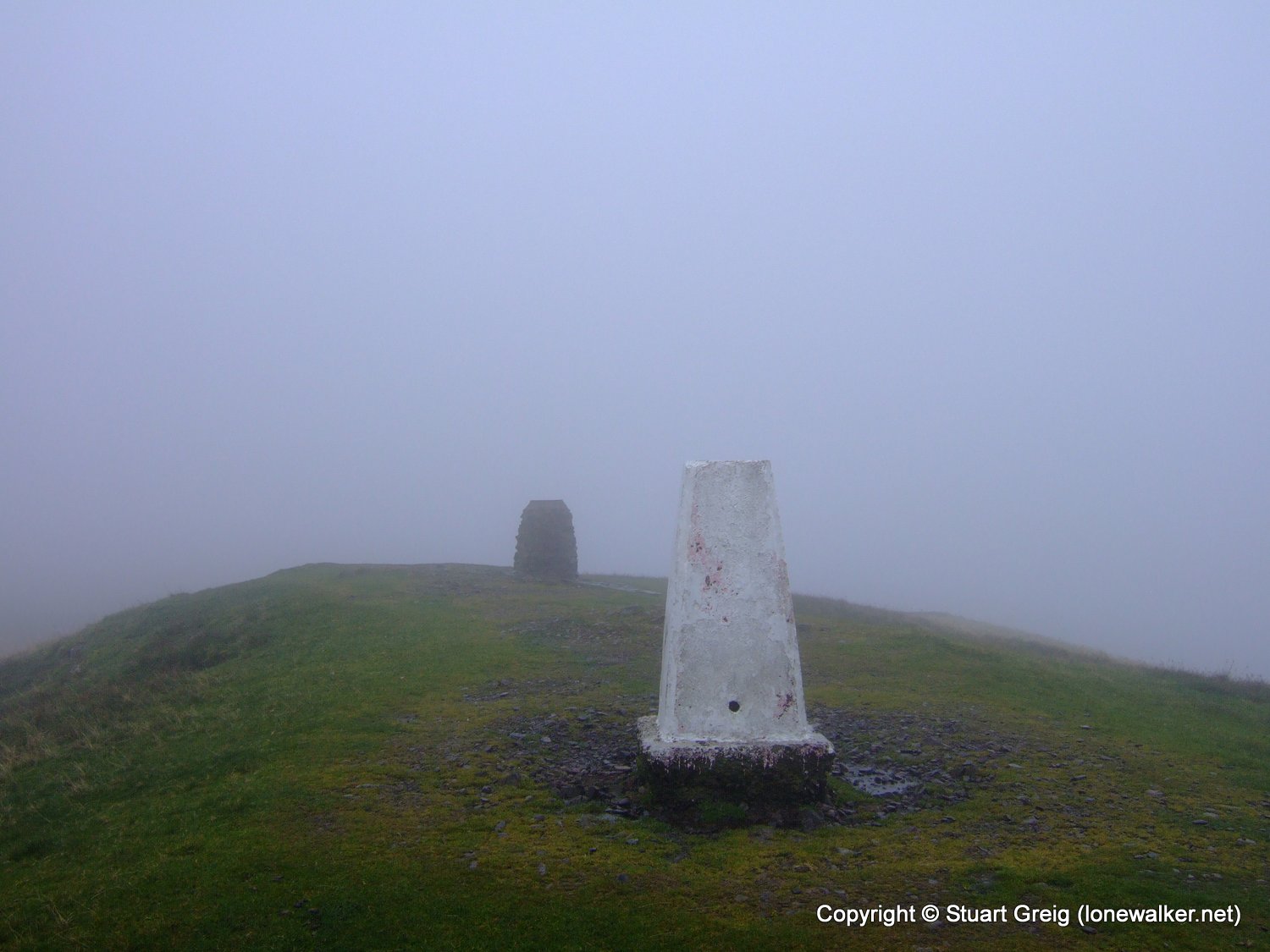 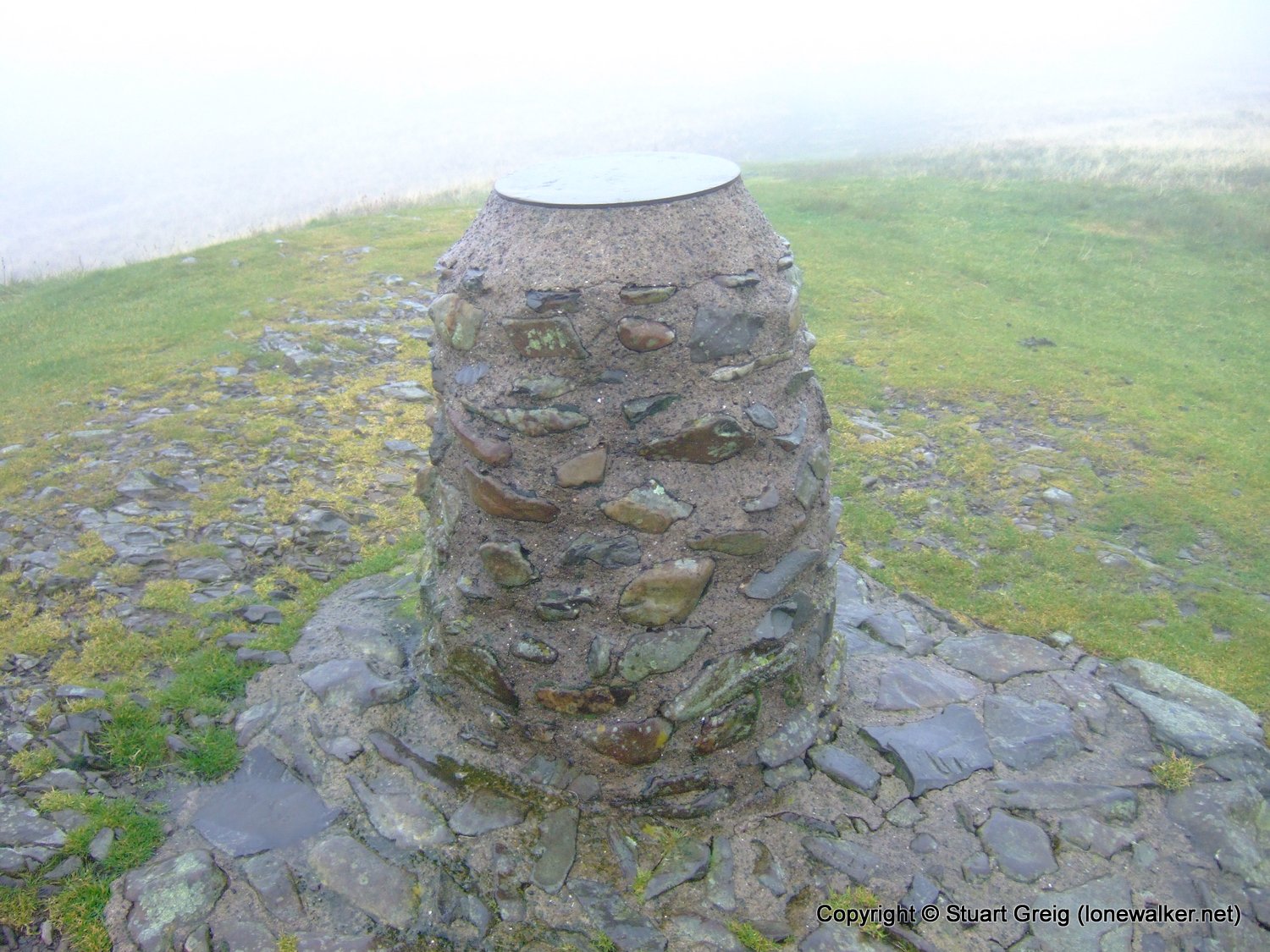 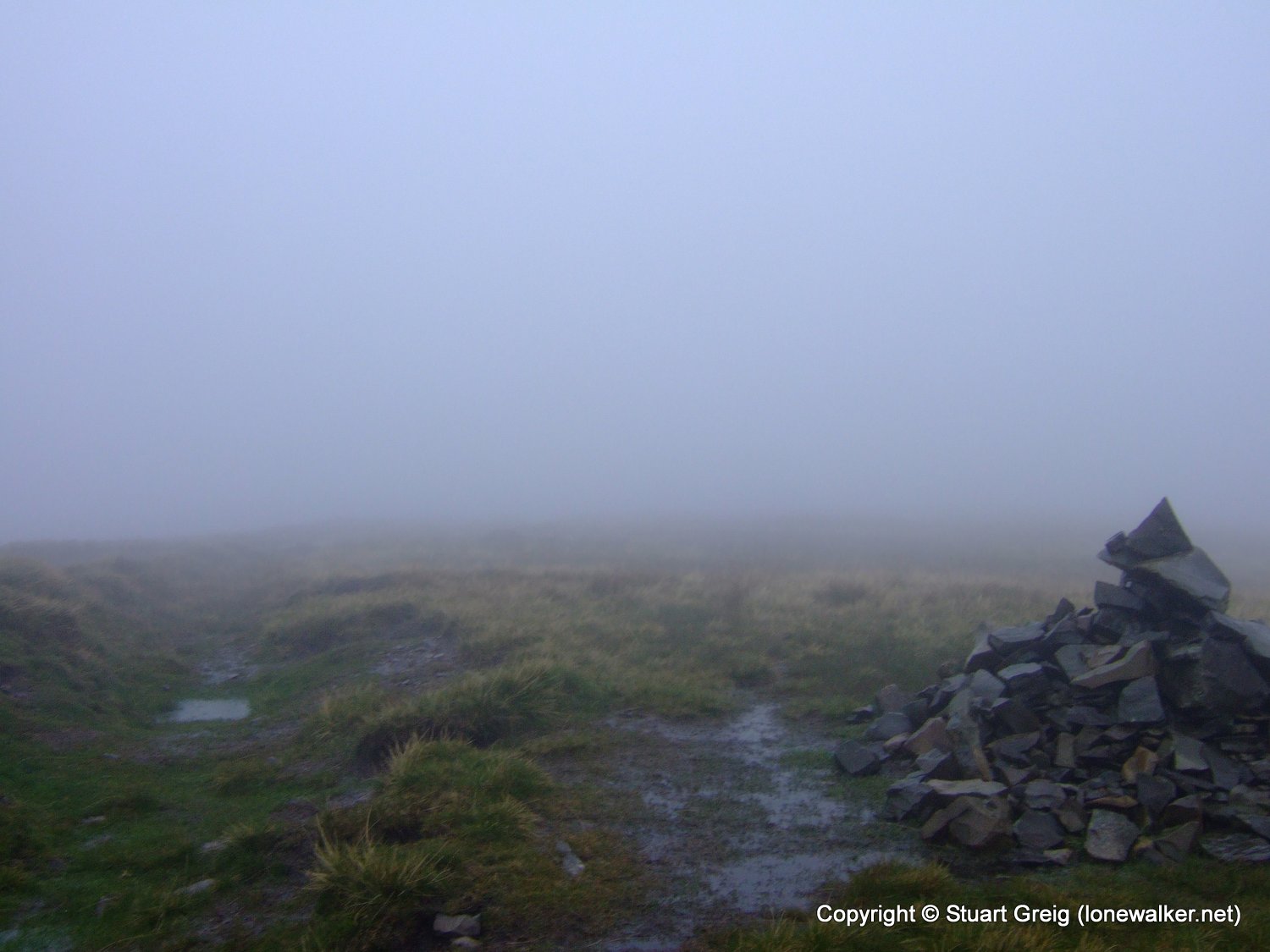 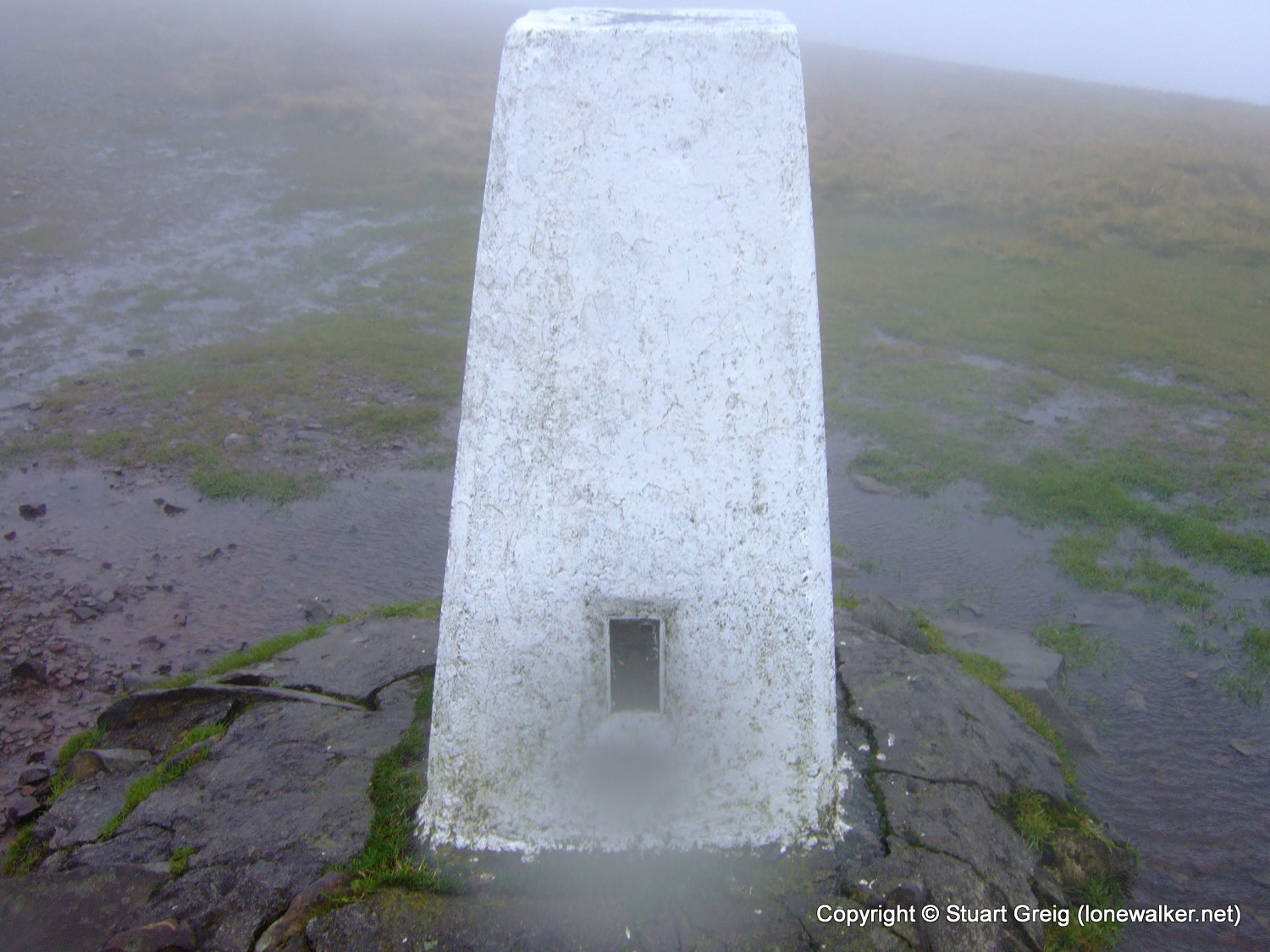