I had to find some lightweight boots to replace the Fastpackers – and I had to find them fast – there are only 5 weeks to go until I set out from Edale on the Pennine Way and I certainly don’t want to be doing that with untried footwear.

A friend has some other Salomon boots – the 4D Quest – and he absolutely swears by them – in a good way! They are very comfortable and completely dry. So I don’t really have a problem buying Salomon.

The problem with the Fastpackers was a combination of user error in selecting a half size too small and possibly a flawed Gore Tex membrane letting in water.

So, I looked at their range and found that the 4D Quest were about the same weight as my heavy Scarpa boots, what I’ve come to think of as my winter boots. I still wanted to go lightweight, so I looked at the Mission GTX. They are a tad heavier than the Fastpackers, but they are a full height boot – this will have the added advantage of reducing the amount of debris I’ll get in the boots, especially when I’m walking through heather – which I expect to be doing a couple of times on the Pennine Way.

I found a pair in Go Outdoors and they had them in a size 11 – half a size more than I would normally take, but when I tried them with my socks on they were great. They felt much better than the Fastpackers, so I bought them on the spot. They were £99, which was a hard lump to swallow at the moment (I’m skint), but I’m not risking the whole Pennine Way for a few quid.

As it turns out the Go Outdoors Price Guarantee scheme paid off again (as it did for the purchase of my Paramo Alta II jacket) and I found a site on the Internet selling the Missions for £80 – so I went back with the proof and GO refunded me the best part of £30.

I’m just back from a 10 mile test walk with the new boots – and what a difference! I chose a route in the Bowland Fells, it started out along a gravel track, then climbed steadily along a four-wheel drive shooters track before heading across heather moorland for a short while, to pick up a very wet and boggy path back to a tarmac road which was followed for about 3 miles back to the car. So a little bit of everything to test them out on.

I spent the first 1/2 mile or so very concious of how they felt, testing the fit and so on and then six miles later I remembered I was supposed to be testing boots! I’d forgotten I had them on. They really are that comfortable. They seemed to keep the wet out too – although the boggy track was wet, it wasn’t very long – so it’s not a full test. The final mile or so would have had me kicking my feet back into the heels with the Fastpackers, but not so with the Missions – a much easier fit.

This is a post-walk update, reporting on the Salomon Mission GTX boots. I used them every day for the 260 miles journey from Edale to Kirk Yetholm and they were absolutely fantastic. These are the most comfortable boots I’ve ever worn. Even on the final 26 mile stage from Byrness my feet felt fine – they felt tired, but that’s only to be expected – but the boots were great.

My only very slight complaint was that they felt warm in warm weather. My feet did feel a bit sweaty after a long warm day, but there was no rubbing, no hot spots and no blisters. My feet didn’t suffer at all from the boots.

One thing that happened on this walk, which has never happened to me before is that two of my toe nails turned black – the second toe on both feet. I suppose this must be down to the boots, but they weren’t sore, there’s plenty of room in the toe box and they don’t hit the front of the boot when I’m descending. But for toe nails on both feet to go – at the same time – is too much of a coincidence.

I’m still wearing the Mission GTX boots, although the current ones are a replacement pair – supplied by Salomon when the first set started to deteriorate after 16 months. Fortunately the Salomon warranty period for boots is a very impressive two years.

The original pair saw me through two summer of walking, one winter and two long distance paths in their time, until the toe box started to peel from the upper, letting in too much water for them to be comfortable any longer.

The Missions are no longer available in shops, so I’ll be very disappointed when the current pair die on me. These have been my favourite boots of all the ones I’ve used to date.

I’m beginning to despair of ever finding a pair of reliable, long-lasting, lightweight boots for the hills.

The list of boots I’ve had in the last three or four years seems to be endless and none of them have been completely satisfactory for more than a few short months. Maybe I’m expecting too much, I don’t know, but at around £100 per pair I would hope to get more than a single year’s walking out of them.

I thought I’d discovered the answer last year with the Salomon Mission GTX boots. After almost 12 months of use they were certainly lightweight, they were supremely comfortable and they seemed to be on the their way to ticking the final box too – longevity. It all went horribly wrong almost exactly 12 months after I had them though. Those faults are documented elsewhere on this site and involved the footbed of the shoe coming away from the upper and leaving longitudinal  gaps along the boots that let in serious amounts of water.

Fortunately, Salomon’s warranty policy is excellent – you get two years on boots – and Go Outdoors where I bought them from were very helpful in getting them replaced for free. The new boots were identical and I put the problems of the first pair down to a freak manufacturing problem and crossed my fingers.

Just last week though, these new boots also started to go quickly downhill. After noticing that they were letting in more water than I would like, I started to notice that the coating on the front of the boots was fraying and peeling away from the upper. Over the course of a single walk I could see this process becoming increasing worse.

I got home and took these photos – the left boot is the worse, but the right boot is showing signs of doing the same thing. 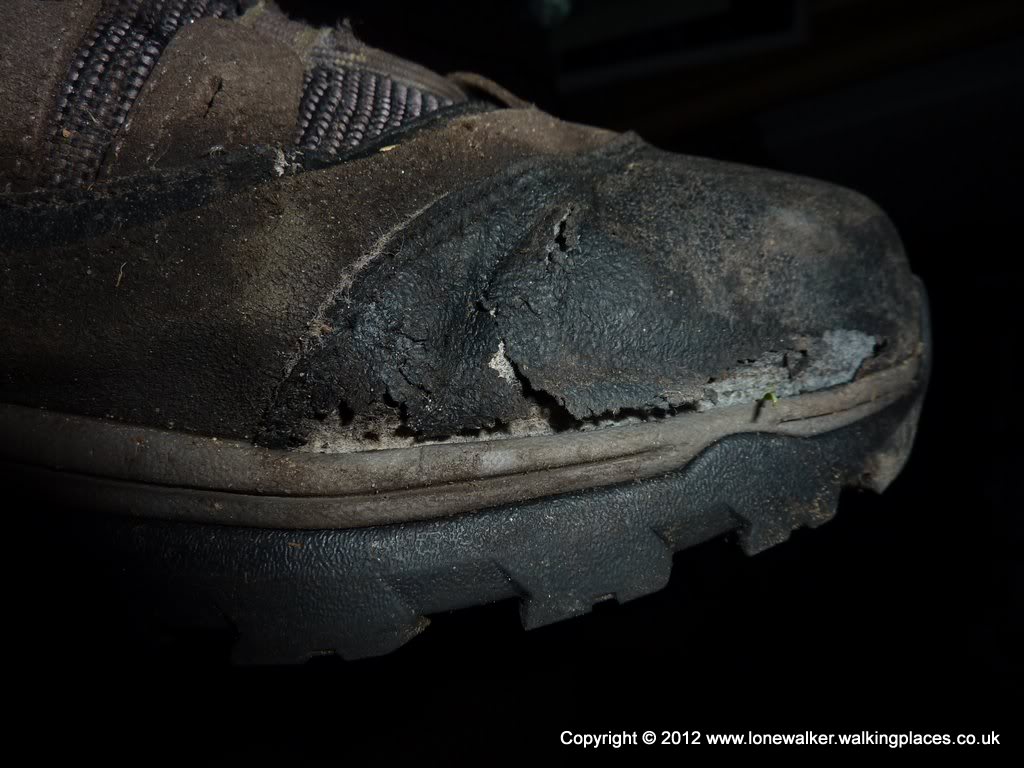 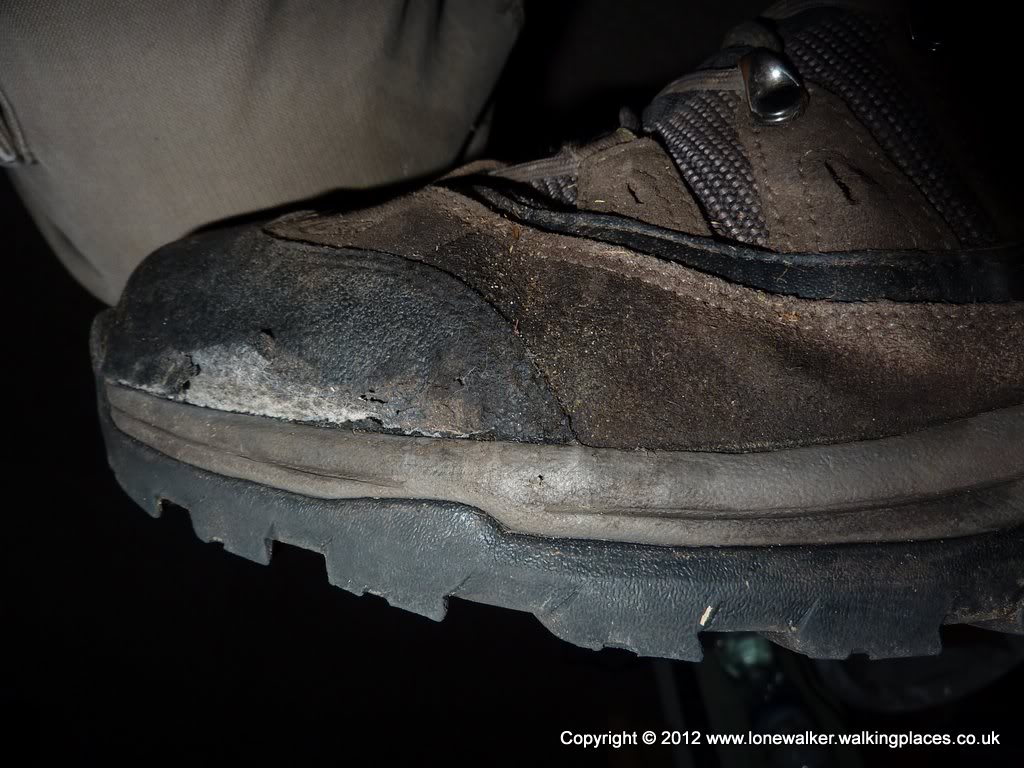 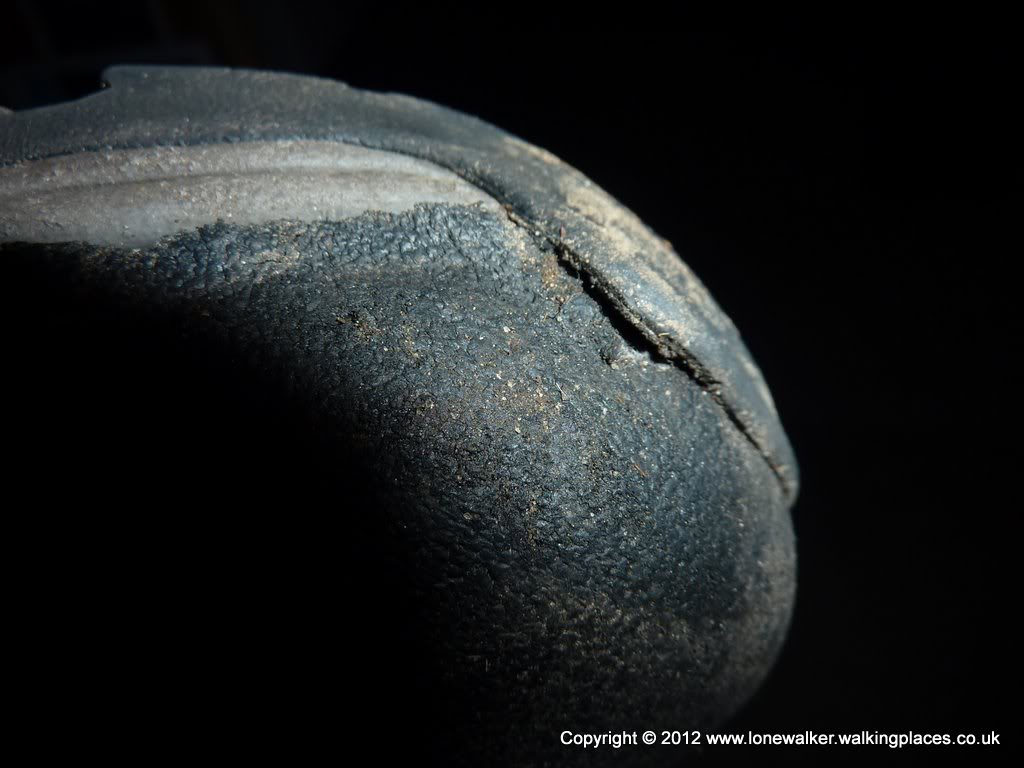 So these boots had lasted even less time than the first pair – I’d got 7 months walking out of these. Again the Salomon warranty was called upon. Although they don’t re-start the warranty period when the replacement boots were provided, I was still within the 2 years period from the purchase of the original pair. I took them back to Go Outdoors again.

I must say, for what appears to be an outdoor supermarket type organisation, Go Outdoors are fantastic. I ended up speaking to the same chap as last time and he remembered me and my boots – I suppose it helps that he has a pair of Missions too. He contacted Salomon immediately.

As the boots are no longer made, Salomon weren’t able to replace them, so I’ve been given an in-store gift certificate for the original price of the boots. Now this isn’t anything like as flexible as a refund, but I suppose it’s an acceptable outcome given it’s been almost two years.

I’m tempted to try another pair of Salomon boots – the Comet 3D GTX seem to be a replacement boot for the Missions, but they are £125 – which seems quite a lot for what they are.

[important]But at least I know if they go wrong in the next two years I have an excellent warranty to fall back on.[/important]