My blog seems to have been dominated by Memory Map (MM) posts over the last few weeks and for any users of this digital mapping app, that should be taken as a good sign! The recent flurry of MM related posts is directly related to the work that is being done on the app by the developers. I’ve had several conversations over the past few weeks with the head of the company in the US and as part of that process I was asked to submit any frustrations I had with the current release. My comments were reviewed and I’m pleased to say, many of them have been addressed in the latest release of the app.

You can download Memory Map for Windows PC, Mac, Android and iOS from this link: Memory Map Downloads

There you will find a link to the new v6.4.1 release. I’ve been using the beta version for a couple of weeks and I’m immensely impressed with the fixes and updates that have been delivered.

The full version history for the new release is as follows and I’m going to run through the items in red, as these are addressing the issues I raised. 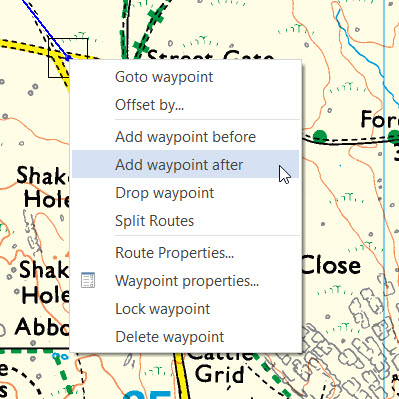 You’ve always been able to split a track and join two Tracks together (if you get their ends close enough), but this feature has been lacking when it comes to Routes. It made editing and modifying routes incredibly frustrating and I’m so pleased to see this feature. This feature alone makes the whole release worthwhile!

Visually it will seem as if nothing has happened. The two routes still appear to be one, but if you drag the highlighted waypoint away from its twin you will see two routes. If you right click either of these waypoints, you will now get a ‘Join Routes’ menu option where previously you had ‘Split Routes’. You can use this to join this route to another. Joining routes takes a bit of practice, but in general ‘Join Route’ will choose the nearest joinable end of a route within 5km.

This major MM update added another feature that affects imported overlay, especially those with Routes in them. MM will now only show the waypoints in a route, when that route is selected. This applies to all routes that have more than 50 waypoints in them. This significantly increased the refresh performance of some of my large overlays and also makes right clicking on a route easier, as you are no longer clicking on waypoints by accident. This was a particular problem when zoomed out on a map display and the waypoints made up nearly all the clickable space on a route. When you click back on the route, the waypoints appear and you can work with them as usual.

In the beta version I’m using (as of 27-01-2021) any existing overlay with routes will continue to display the waypoints until you click the route then click off it. This may get ‘fixed’ before final release, but worth being aware of it.

If, like me, you found icons becoming duplicated in your list, MM have now released a fix for this. Icons with the same name will not be allowed to duplicate in the icon list.

In v5 of the app, loading times of large overlays could take minutes. Even with my 8th Gen Intel Core i7-8700 @ 3.2GHz with 16Gb RAM and an overlay with the Database of British Hills (25,000 Marks) would take 2-3 minutes to load into MM v5. When you selected Delete All however, it would delete them almost immediately.

In v6, the loading time was significantly reduced, but conversely, the delete time seemed to take as long as the previous load time. The result was no net gain, but an increased frustration level – it seemed to be worse waiting for the delete to finish than it did for the load to finish!

This major release has dramatically improved both loading and deletion times of large overlays. There is almost no lag now, even on large files like the Database of British Hills. The previous 2-3 minutes load time is now just a few seconds.

In v5 of the app, MM would display all your Marks, no matter how many you had in an overlay. It seemed to handle rendering pretty well and even in my Hills overlay, with over 25,000 Marks I could zoom in and out quite easily with no visible lag.

In v6 of the app, MM moved to a different graphics library and now use the PNG image format for icons, which includes an alpha transparency channel and the ability to change the colour. Unfortunately on some machines this meant that the performance was much slower. Rather than just have the app freeze up, the developers decided to limit the number of Marks that were drawn at any one time, to 500. The result of this can be seen below. This is my overlay with all the 1:25k scale OS map squares of the Yorkshire Dales National Park. There should be a Mark (either red or green) for every square (2,359 of them), but v6 only showed a max of 500.

The fix isn’t perfect, v6 still won’t show all the Marks like v5 used to, but it now uses a small place holder icon to show there is a mark there. It seems to respect the colour of the original mark too, so in this example, I get a small green dot where there should be a green square and a small red dot for the missing red squares.

I’m reasonably happy with the compromise. Performance hasn’t been impacted and although we’re not back to where we were with v5, we still have the advances of the PNG images and there are no gaps where marks should be.

This was only a slightly irritating problem I found with v6 – the waypoints were more difficult to hit with my mouse pointer. The fix was to increase the hit-detection radius around the waypoint, so it was easier to click on. It’s so often the small things that make a difference!

v6.4.1 of the app makes saving and importing a little easier. The Save As and Overlay Import options, will now remember the file format you chose last time. So if you always prefer to save and import in MMO you won’t have to keep changing back from GPX all the time. A huge time saver!

Another minor issue, was the way the labels on Marks and waypoints didn’t scale particularly well on high resolution displays (like the one I use). The text now scales much better.

The changes have provided a huge boost to the usability of the v6 release. Up until the past couple of weeks I’ve been mostly using v5 and struggling with a product that hadn’t been updated for a few years. v6 is now my go-to version and I can easily see me uninstalling v5 in the near future.

I have updated my parallel user guide for Memory Map with these changes. You can find that here: lonewalker.net/projects/memory-map-user-guide/

Transparency Note: I have no affiliation with Memory Map. My recent conversations with the company came about following a support ticket I raised with them and was subsequently contacted by them and asked to provide some feedback on the current version of the app.