You can find the previous part of this guide here: Part 1 – Introduction

Part 2 of this parallel user’s guide covers the basics of using Memory Map and moving around the map screen – something that definitely takes some getting used to.

The more you use MM, the more screen real estate you will crave. The bigger your screen the more map you will be able to see at once. I have a multi-monitor setup, using a 32″ 4K monitor as my main screen for the best possible MM experience! I also use it on a laptop, so it has quite a flexible interface. The two panels on the right of the screen shown above can be undocked and left to ‘float’ in your screen, or they can be moved to another screen entirely. These panels will remember their position between reboots.

There are three main components to the MM screen, and if you can have all these open at the same time, then all the better.

The map screen (on the left above) is obvious. This is where you visualise your maps, routes and tracks.

The Overlay Objects (centre above) panel shows all the objects (routes, tracks and waypoints) that are currently open in MM. MM doesn’t use a traditional file management method, but we’ll cover this in more detail in subsequent sections of this guide. Each of the items in the Overlay Objects window is an entity in the Overlay, clicking one of these will load its data into the right hand panel…

The Overlay Properties panel holds all the detail about the specific overlay object you’ve clicked on. It’s where you change colours, properties and settings associated with that route, track or waypoint.

This video adds some context to this and shows some other features, which we will cover later.

Working with the map 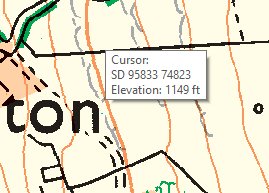 Following on from the previous post, we hopefully have a map loaded into the program and have a mouse pointer hovering over the map. As per the screenshot to the left.

Although you can’t see the mouse in this screenshot, this is the sort of information that you see beside the pointer. It shows the current grid location and the elevation of the point under the mouse cursor. If you don’t like seeing this, you can switch it off in the menus (more on that later).

Right clicking the map allows you to do various things; as follows 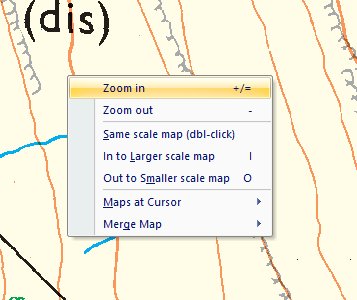 Zoom in and Zoom out is best achieved using the mouse wheel – this will become second nature and simply shows more or less of the current map on the screen – zooming in or out as described. So forget these first two menu options – use the mouse wheel.

Unless you have the whole of the UK mapping, if you zoom out far enough you will probably find white space at the edge of the map – MM only loads one map at a time – which makes map scrolling more responsive, but does mean you need to load the next map into memory quite a lot. Again we will use the mouse for this, as the third menu option suggests we will use double click on the mouse. If you double click the white space next to a map MM will load the same scale map for that white space – provided it has the map in its map list (i.e. you own the map and have added it as described earlier).

The In to larger scale map and Out to smaller scale map menu options allow you to move between Explorer, Landranger, Atlas maps and road maps as you wish. You can also use the keyboard for this (i = smaller scale, i.e. 1:50k to 1:25k and o = larger scale), or the option in the Ribbon menu (see later).

The most useful menu option is Maps at cursor. This opens another menu to the right with a list of maps available for this particular spot in the country. So if I right click on Starbotton for example you see this list of maps.

In this instance I have the 25k and 50k HD maps, Explorer OL30 for the North & Central Dales area and the Dales National park map as well as a load of others. Clicking on one of these options loads that particular map into memory.

Merge Map allows you to stitch together two or more maps to create one larger map. This is quite useful if you’re trying to print a route that runs across multiple maps. It does end up producing slightly degraded maps in terms of image quality however and should be used carefully. I use this so rarely that it’s hardly worth spending any time on. The price drop in OS mapping has made Full UK coverage much cheaper and attainable, so this is likely to become less important as time goes on.

Now that we’ve got a map loaded into memory and we know how to change it, we need to start moving around the screen. One of the first menu options to play with is Mode>Continuous Scroll. This changes the way the map moves beneath your cursor. With this option activated; when you left click on the map, the map moves beneath your static mouse cursor as you move the mouse around on the desk. With this method, you can cover huge distances without unclicking your mouse. With the option de-activated; once clicked, the mouse cursor is locked in position above the map and the locked cursor and the map move as you move the mouse. In order to move large distances, you need to unclick once your mouse cursor reaches the edge of the screen. Try both options and see which one works for you.

Mode>Position Format is something you’re going to want to change from the default (if memory serves). I’m an OS National Grid man myself, as I guess most walkers will be, but you can select Lat, Long if you prefer and this is useful sometimes. 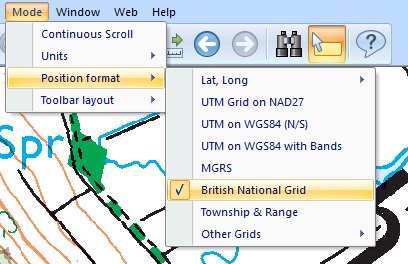 You will also want to select Mode > Units> and select the appropriate unit type.

If you’re a feet and inches person then Statute is for you. Distances will be shown in miles and height will be in feet. If you prefer the French system then select Metric as your choice and you get kilometres and metres.

One of the easiest ways of moving quickly around a map is to use a combination of zoom out and zoom in. Zoom out and move the mouse cursor to the position you want to move to and then zoom in – this uses the intelligent zoom to its best advantage – MM zooms to the mouse pointer – not to the screen centre like some programs.

If you want to move a long way across the country without searching for the specific map in the map list I tend to right click, choose Maps at Cursor and select a large scale map like the 1:1m Road Map and then zoom right out; point at the area I want to view and then zoom in. I then use Maps at Cursor again to select the more detailed map.

Related to this functionality is an option off the main Map > menu, specifically Map > Show Map Outlines, this can be quite useful for identifying which maps you have and their boundaries. This puts a faint green line around all the maps you own – even if they aren’t in memory, so that when you’re viewing the UK from a huge scale map such as the 1:1m Road Map, you will be able to quickly spot your map sections.

Another way to jump quickly to a location is to search for it. Assuming you have an MMI file for the map in memory, you can hit CTRL + F and you will get a search dialog box on the screen. Type part of the place you’re looking for and hit [Search] the results appear in the window below. If you double click one of the results the correct map will be opened and you will be transported to that location (provided you have the map). If you check the ‘Create mark at location’ box, you will drop a flag on that location on the map too.

The short video below will show you how to use CTRL + F in the map window. The first step just finds the location you’re looking for, the second step drops a marker at that location as well.

The next part of this guide can be found here: Part 3 – The Icon Ribbon