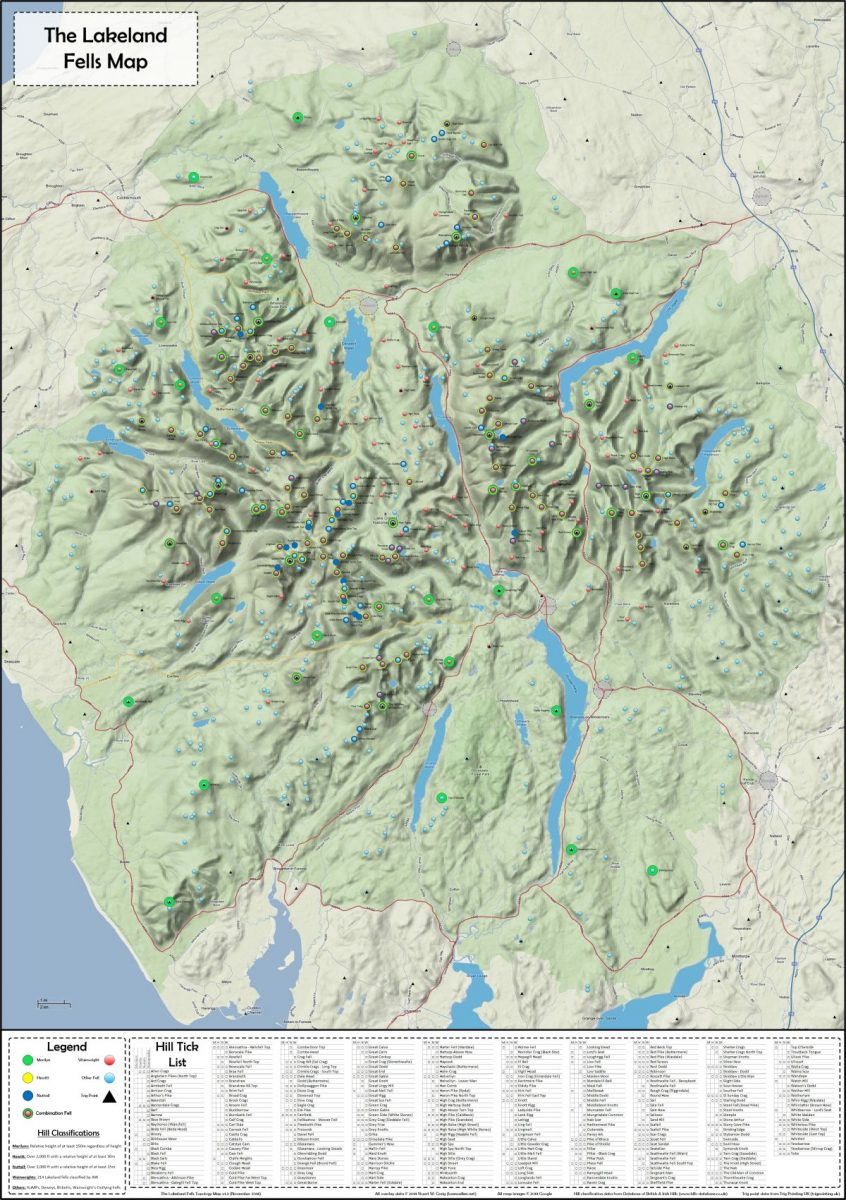 This topology map of the Lake District fells came around after a chance conversation with my walking friend Matthew King. He was creating a bespoke map of the Wainwrights, something that would show the hills in relation to each other and where it was possible to link them with a ridge. His map was very functional, but not quite as aesthetically pleasing as I would have liked. Click here for a view of his map.

It was a great idea and I sort of stole it and worked it into something that fit my needs a bit more closely. I wanted to show all the major hill lists on my map and I wanted a tick list section that I could update once I’d visited the summit. I also wanted to be able to hang it on the wall as a visual reminder of my progress, so it also needed to look good.

I spent a lot of time, using a variety of tools coming up with the map you can see over on the left of this page (clicking the map will give you a bigger version to look at). It includes several hill lists; as well as the obvious Wainwrights it shows the most common bagging lists of the Marilyns, Nuttalls, Hewitts as well as some of the less well-known ones such as the HuMPs, Deweys, Birketts and Wainwright’s Outlying Fells. The fells are represented by coloured circles and they are overlayed on a Google Terrain map which shows roads, lakes, and the hill contours.

Each hill group circle is slightly smaller than the last and is a different colour, so it’s quite easy to identify hills which fall into multiple classifications. As an added bonus I’ve added all the trig points (all the pillars at least) as well. This now provides a useful overview of all the Lakeland Fells, not just the once described by Wainwright.

At the bottom of the chart is an alphabetical list of all the fells, each with their own check box which you can tick off to show your progress; this covers all the major tick lists, but there wasn’t really room to include all the ‘other’ hill lists. See below for an example of the tick list section of the chart. 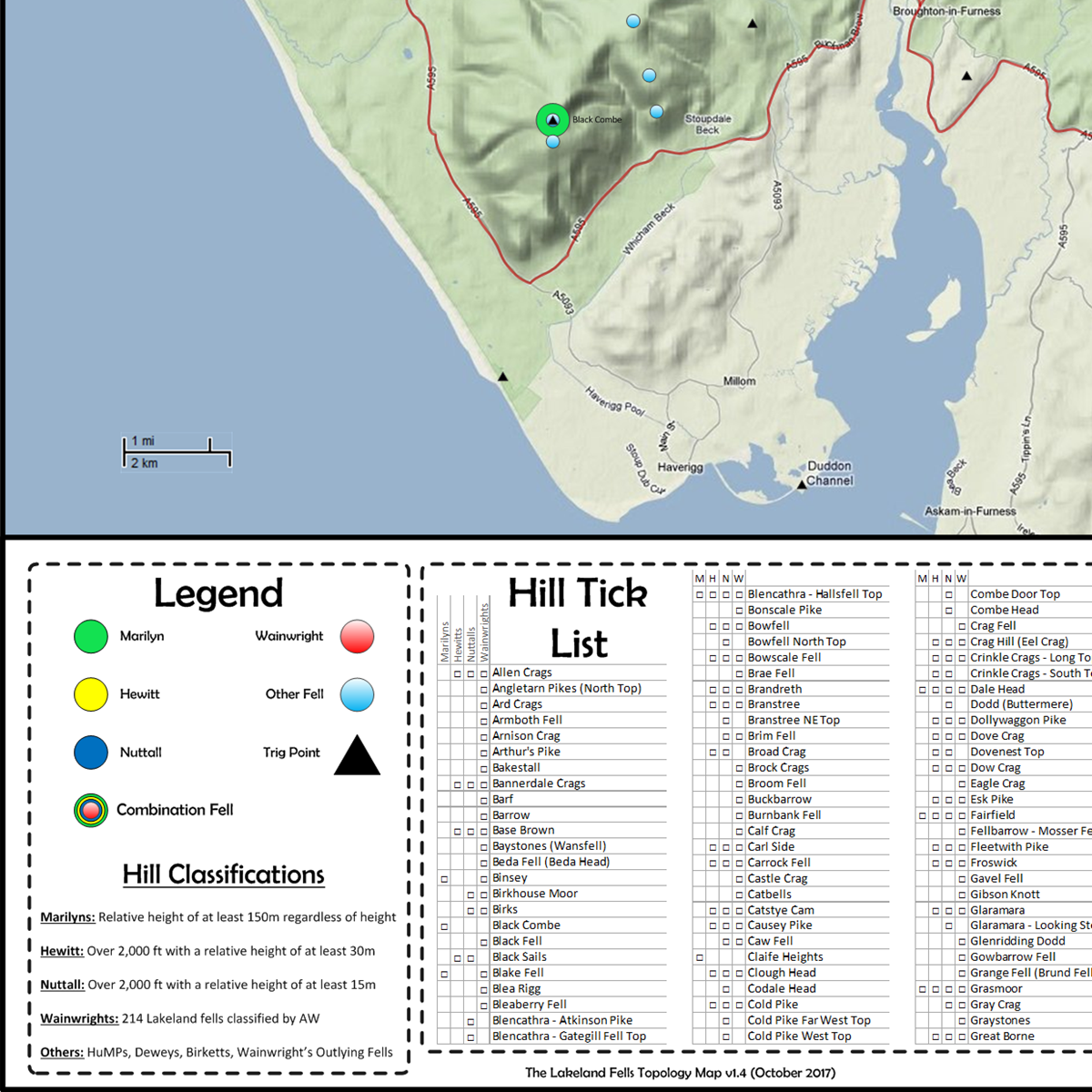 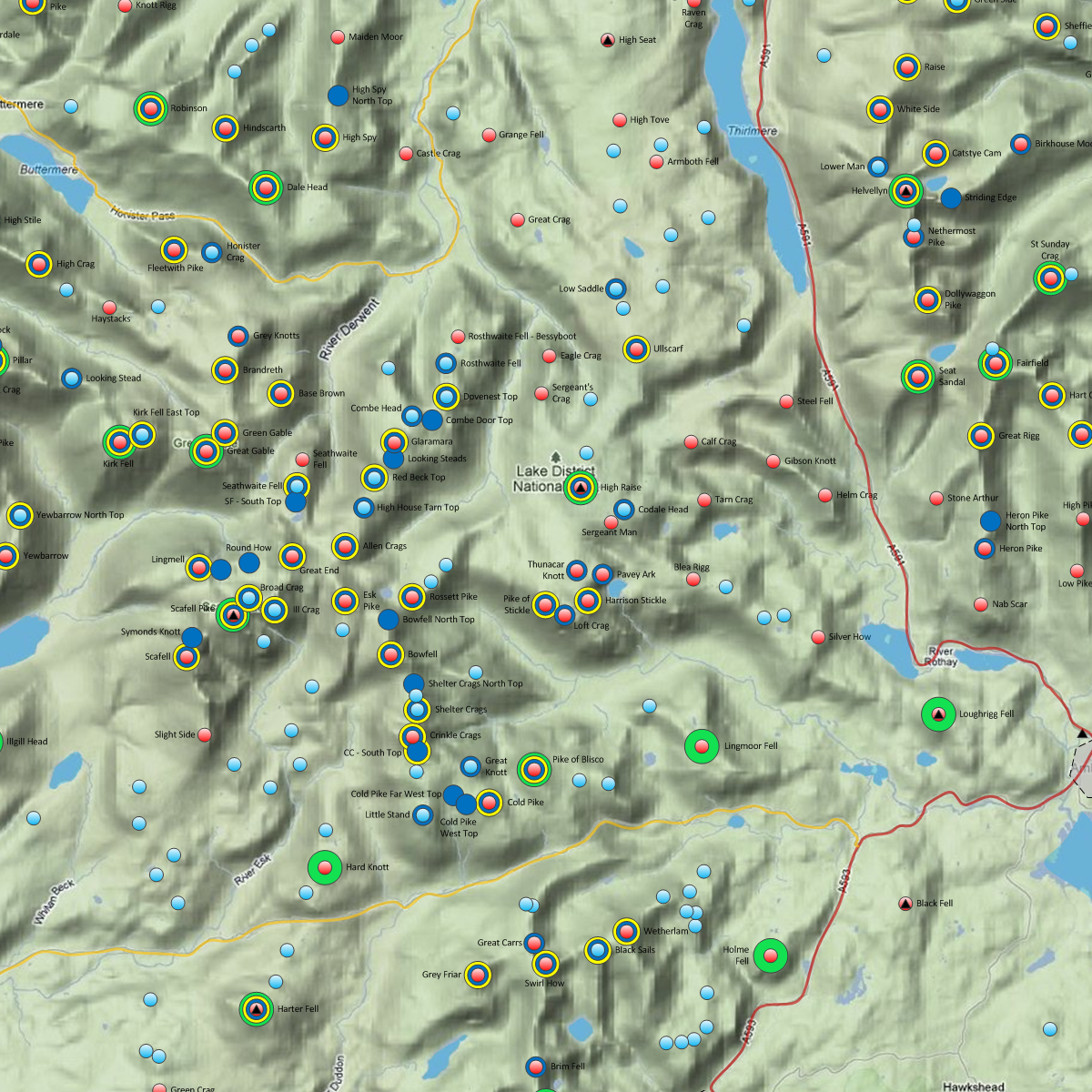 For those of you who aren’t familiar with the British hill lists, here a quick run down of what’s included on the wall chart:

Above right shows a zoomed in view so you can see how the map works in a little more detail. Notice that High Raise (almost exactly centre image) is a Wainwright, a Nuttall, a Hewitt and a Marilyn all shown with concentric coloured circles. The black triangle in the middle means it also has a trig point on the summit.

You will receive a JPG image of the map, not a printed version, but this means you can choose your own size and format, using one of the many places on the web that will print images for you. I have an A0 (1.1m high by about 0.8m wide) poster on my office wall, and it looks fantastic.

There are a number of online services that will print the file for you – I’ve tested both VistaPrint and InstaPrint, which offer lots of different types of printing options.